We're Back And Rambling 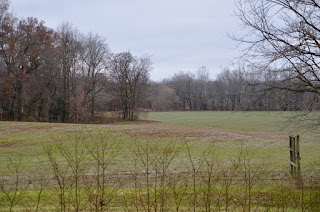 Who knows what it is. It's not depression, it's not 'writers block', nor is it boredom ... it's just something I do almost annually and usually during the winters.

I delete this blog and my social media accounts.

A lot of the post today might be repeated information for long time readers because in my fading memory I do remember in past years writing about the same reasons and justifications that I will throw in here today. Addiction ?  Maybe and if so, then a large percentage of the USA is addicted along with me.

But really, addiction is not the reason. I enjoy writing, enjoy taking the hound photos or just photos in general and all of that is just to strange to blog to yourself. Plus to some readers, they look forward to not only seeing the hounds but what I am talking about, which for me is hard to figure out what's so interesting in that. 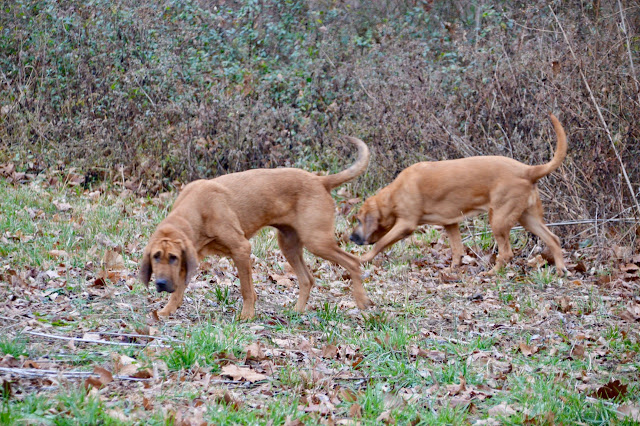 Maybe that first picture in the upper left corner is the reason, or the temperature dropping to a daily normal way below my comfort level. Yet, that is part of living in 'the tropics' of southern Indiana and luckily much further south than the snow I watched in Green Bay, Wisconsin and Chicago yesterday on tv NFL games.
So the only logical explanation for deleting this blog, my Twitter account along with my Facebook account ... is the dark, dreary skies with freezing temps. That sounds good enough for me and it's the story I am going to stand by. 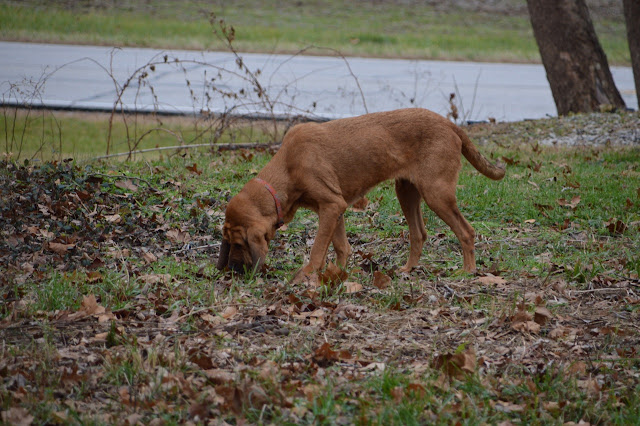 Besides the normal routine for the hounds, they do change their points of interest, their demands and ways of testing  my patience. Heidi moved into her winter hibernation mode weeks ago and only shows herself to eat, to relieve herself outside and if she smells or hears that I might have food. 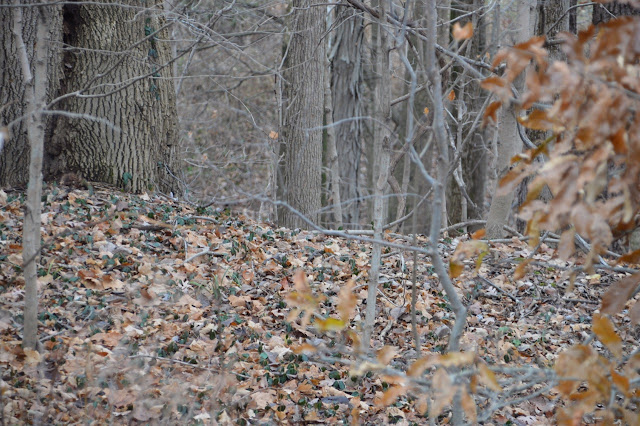 One of the last signs of fall. Still September already seems a lifetime away already. 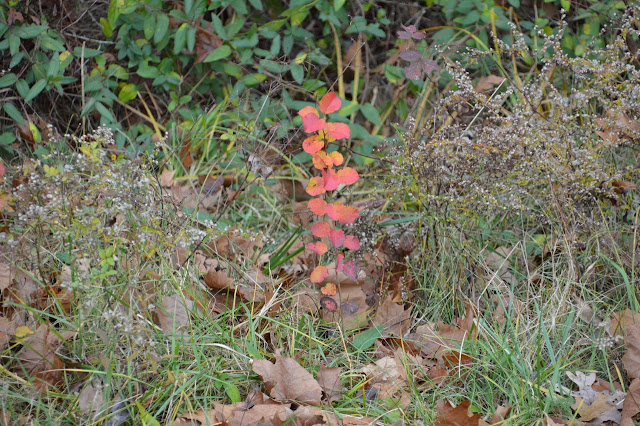 Back to the hounds testing my patience. For the past week on every walk we take, with or without the camera, Stella is on her own schedule and does not hear a word said ... even when I bribe her with yells about food. She is the most stubborn hound I have ever had and that goes back to 1987. 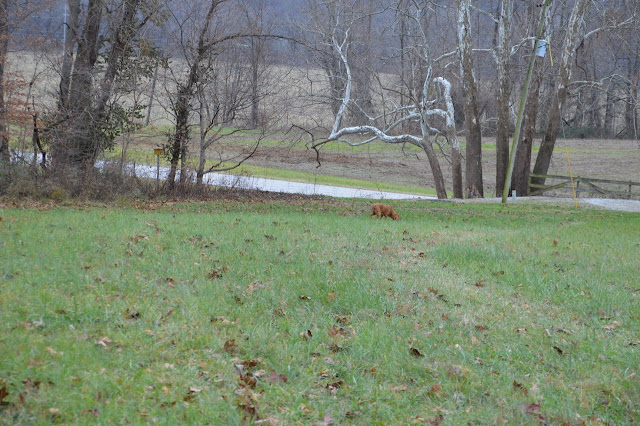 As other mornings since our last blog post here, I've let the hounds do what they want, at their pace, but I would always walk to where ever Stella was to get her to walk home with us and not leaving her outside alone.

Sadie never cares what Stella does ... she likes to explore and will always come when I call her. She doesn't like dropping back to far. 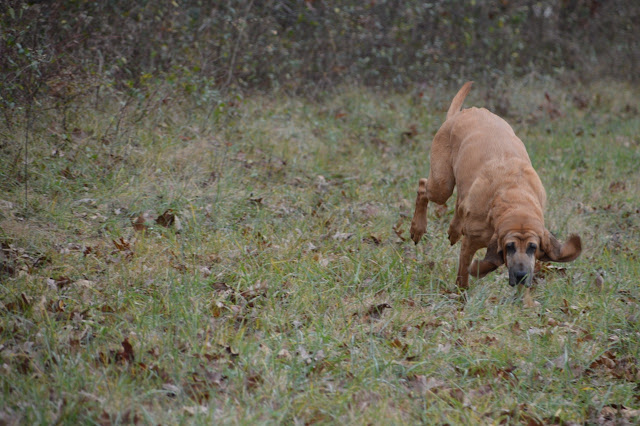 I am noticing she is gaining some weight even though we have not changed food, nor the amount and we do at least two walks per day. Maybe she is naturally building fat for the winter.

Sadie and I had actually walked far enough where Stella was out of sight and standing at the same spot the 2nd picture in this post. I was a little surprised to see her running to catch up with us when I made one more check before taking the first right turn on the walk. 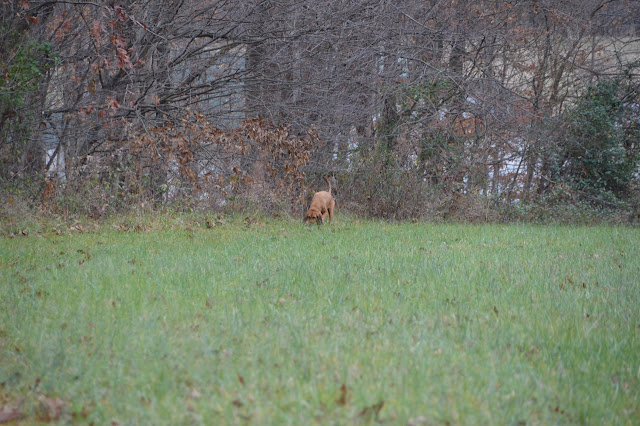 Every day there are just more new scents than their noses can handle. 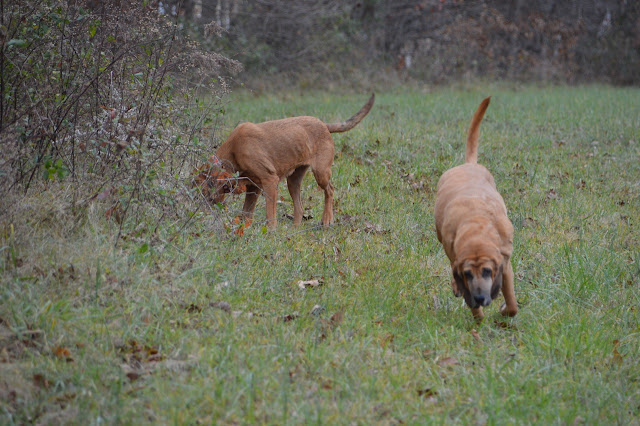 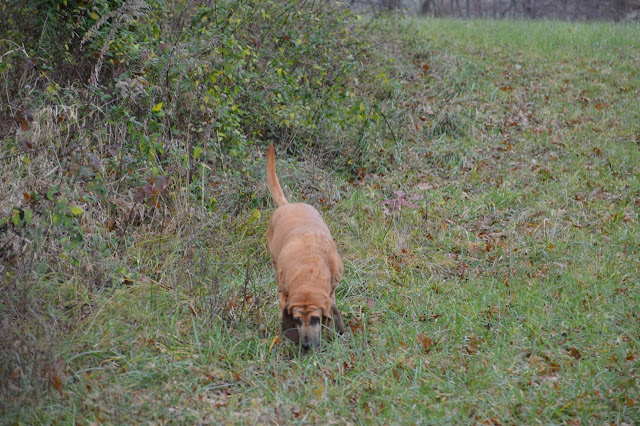 Just because Sadie takes off for the far right corner of the field does not mean Stella will ... after all, she is on her one schedule and will do as she wants, on her time not ours. 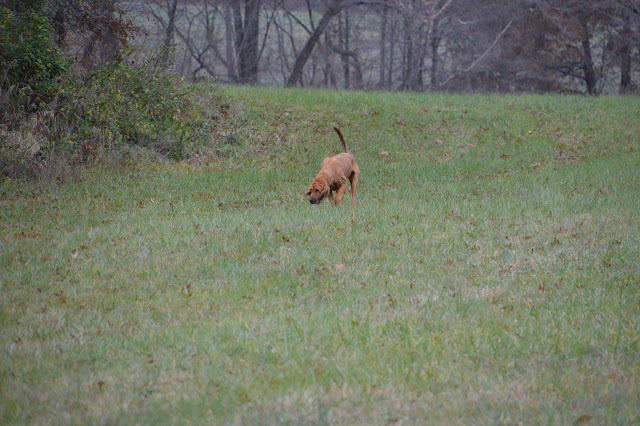 I had already walked along the back edge of the field and was about to make the turn home. This gives you a good idea the hounds are on their own, you can see they are on each side of the picture. 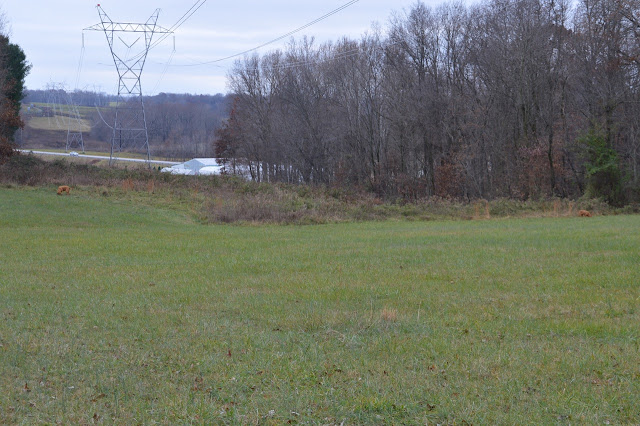 I took this same picture a few months ago and said in a couple of months this will look the same but only about 50° colder ... we're there. 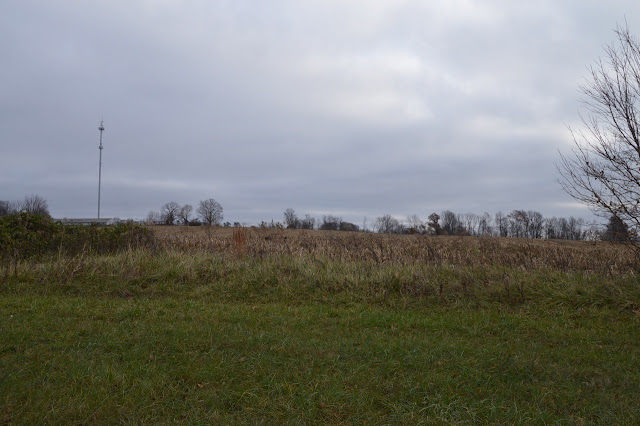 I had decided by this time I was going to continue my walk with or without the hounds, head back inside and see what they would do. I was hoping I would not have to drive the FJ back to this corner to remind them to run to the house ... but I was going to find out today. 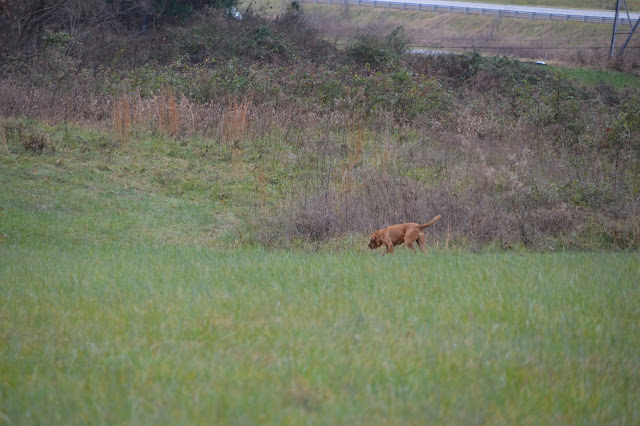 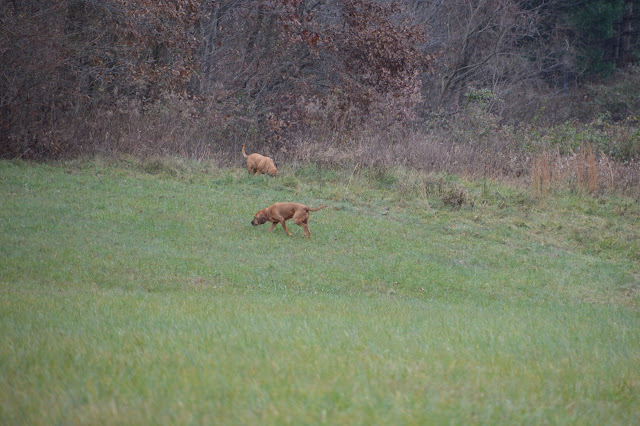 Once that Sadie glanced up and saw where I was, she came running as fast as she could and then slammed into the side of my left knee, right after I had taken my eyes off of her run. 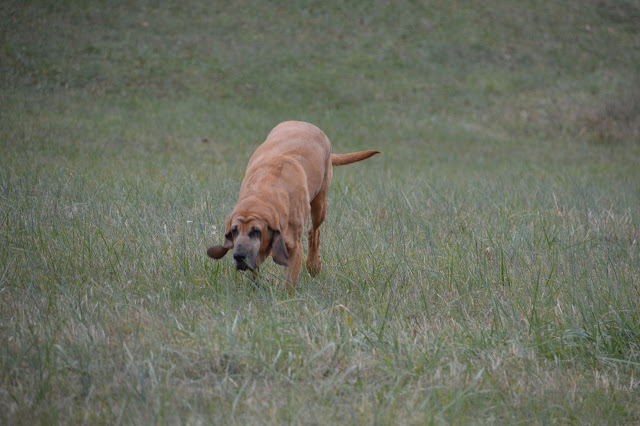 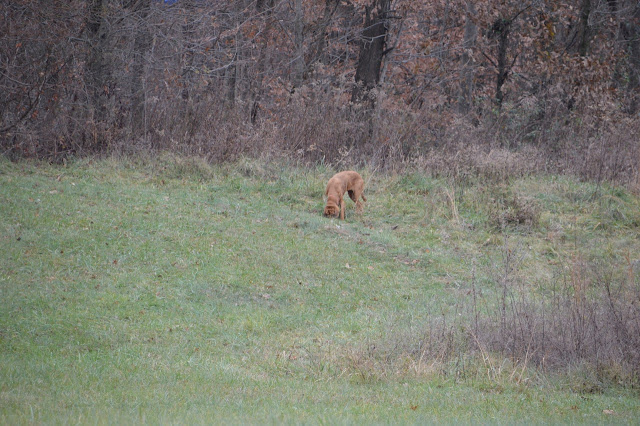 As Sadie and I continued our march back home, with my freezing hands inside my overpriced and worthless "TheNorthFace" gloves, I was unsure what Stella would do ... but once again, she surprised me. 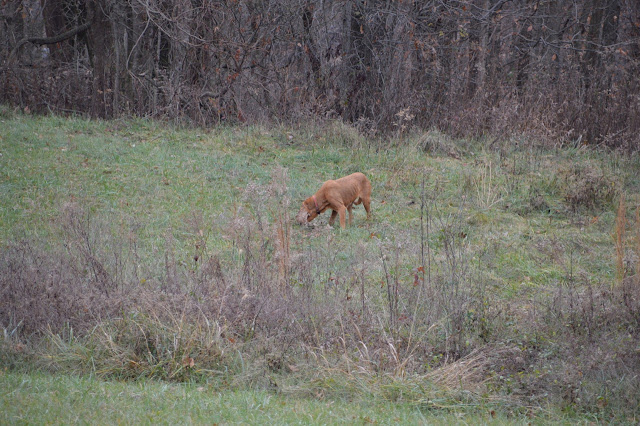 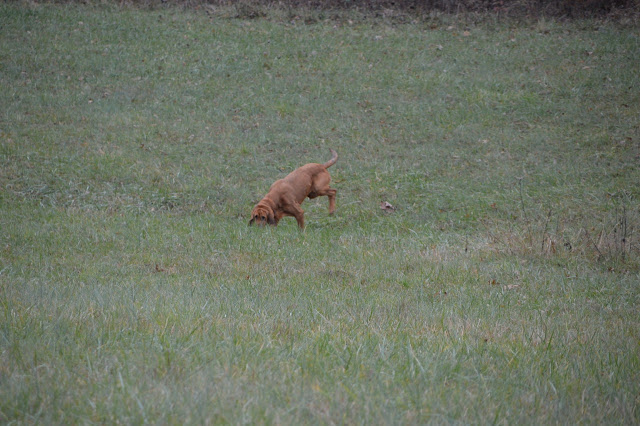 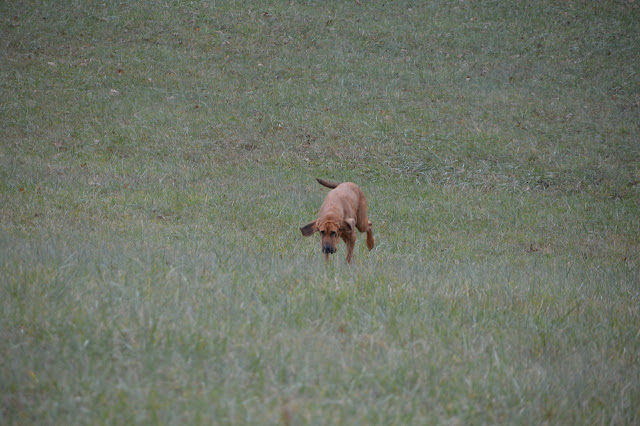 Even on a full speed run she can always find some scent that she has to slam on her brakes to check out. When those sudden stops occur all of that loose skin moves forward. 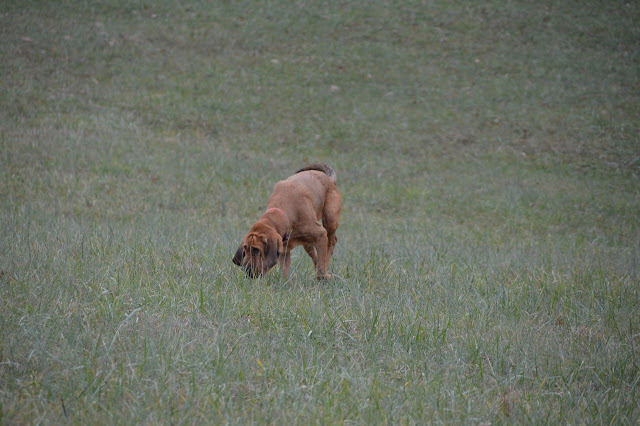 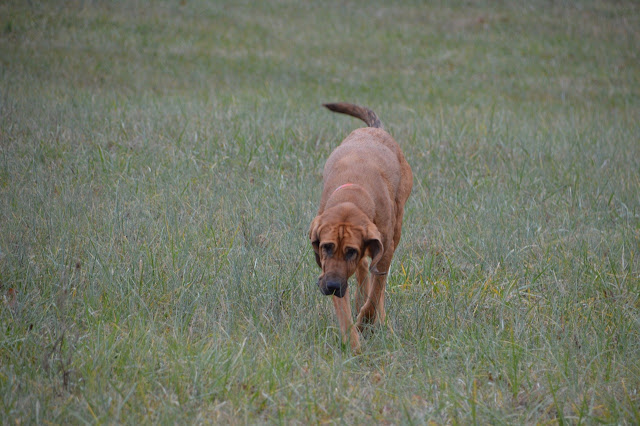 By the time I got back to the corner of the house, I could tell they were not ready to come inside. Especially since Sadie raised her head, looked right at me and then her nose went back to the ground. That gave me time to go inside, take off the down jacket and put the SD card in the computer to download the pictures. 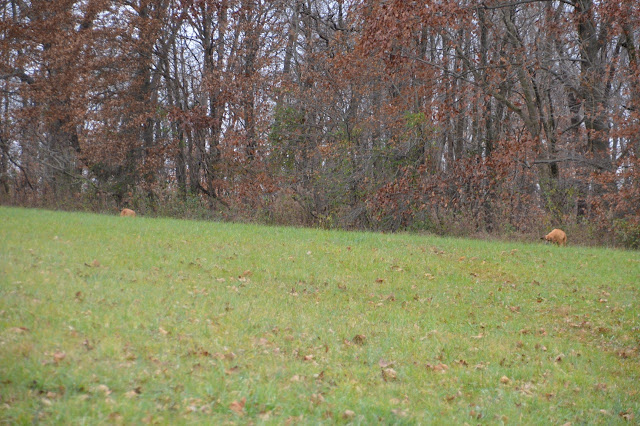 It wasn't long before I heard something hit my screen door. Both of them were standing at the step wanting back inside. It had to have been Stella's nose. Anytime she wants something she will poke it with her nose or use her nose to try and open doors. Thankfully she is not a 'jumper' so she does not jump up on the doors or people.

Heidi in the meantime does this now most of the time. She has moved her sleeping area from the bed to the couch this winter. 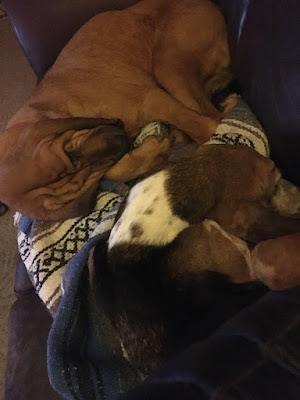 After a few days I did reactivate my Twitter and Facebook accounts. I don't live on them all day and in fact I am away from the computer, iPad and iPhone most of the time. To use up my monthly allotment of data from my Exede Satellite service, those 15Gb's can't go much over 500Mb per day for the month. I've been under that for the past 45 days.

I was hoping all the 'noise' of the elections would quiet down but I knew that wasn't going to happen and in fact it will continue for the next 4 years in my opinion, as usual. I can control what I hear by not tuning into any of the major news stations on tv ... in fact those channels are not on my programmed remote. So if I want to see those channels of bullshit ... I have to type their number on my remote to get those channels.

As far as online, I'll click different news sites but I have found just looking at the headlines and not reading the articles is a lot more enjoyable.

When I failed to get the news that my local university had fired their football coach unexpectedly and friends were texting me asking 'whats up with that' I knew I had to reactivate my Twitter account for that up to the minute sports news. I deleted all the people I followed during the campaign that dealt with politics after the election. I find Twitter is also very good for storm warnings and updates from my local small town electric company ... even faster than getting notifications on Facebook.

As far as Facebook, as I have said before, about the only thing I do there is post 3-4 of these blog pictures of the hounds when the urge hits me. Friends that don't read my blog like to keep updated on the hounds through Facebook. I never tell people where I am or what I am doing on Facebook, neither will I have it linked to my location. Still it is a good way to keep up with old friends that are scattered around the USA.

While the blog was in the deleted status, I have gone to the local library a couple of times and am firmly back into my winter mode of reading books every day plus have added the DVDs they have. Checking out their movies has saved me quite a bit of money and shelf space.

I think it is safe to assume that there are not too many blog readers here that like my blog over on Wordpress. It's only a few pictures and usually a couple of sentences as an introduction. I like the format, the ease of using it but essentially that blog gets very little to no visitors.

Like I have said before and even in the last month ... all bloggers go through times where they wonder what they are doing, why do they keep blogging and even ask themselves if the internet has taken over their life. Very few quit and most come back to blogging and social media. I am going to stop trying to figure out the reasons and just go with it.

Before I go, I had mentioned the hounds testing my patience ... that is mostly Stella. She and I continue to debate what time to serve lunch. I finally have it as the same time as I fed them before changing to Daylight Savings time ... but she doesn't like that either and continues to beg for that lunch to be served as early as an hour or two after her breakfast. That is one war that she will not win.

I've seen her do it every since she came here in August 2015. At first I thought it was clumsiness but it isn't that at all. Stella just doesn't care. She not only walks on my feet at times but she will walk on Sadie's feet or on Heidi. If we are in her way, she will walk into use or on us to get to where she is going. If her seat is taken on the couch by Sadie, Heidi and I  ... she doesn't care, she will climb up, stand over either one of them until they move. If they don't move, she sits on them.

Last night Heidi decided it was time to reverse the roles and jumped up in the center of and on a sleeping Stella, then squeezed a spot in for her nap. I was happy to see Heidi fight back taking her spot on the couch. Stella never felt her and continued to sleep through it all.

So that's enough rambling this morning .. it's already past noon. I might try to get a post in later today with some afternoon pictures ... the sun is trying it's hardest to break out.