The Hounds Enjoy Another Beautiful Day 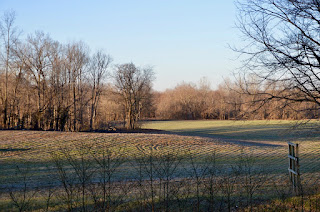 This had to be one of the coldest days in recent weeks. It said it was 31° but felt closer to being in the teens. By the time we finished the morning walk I had frozen fingers under my gloves.

Sadie and Stella didn't seem to notice and were probably wanting to stay out longer than we did.

Last night as I approached the top of my driveway and was making the turn into the carport ... my headlights caught a golden-red cat sitting just at the edge of the yard in the center of this next picture. By the time I got out of the car and walked out to see if it was interested in food in the freezing night, the cat had already disappeared.

That explains a lot about the reason Sadie has been so interested in that area and down into that ditch these past few weeks. 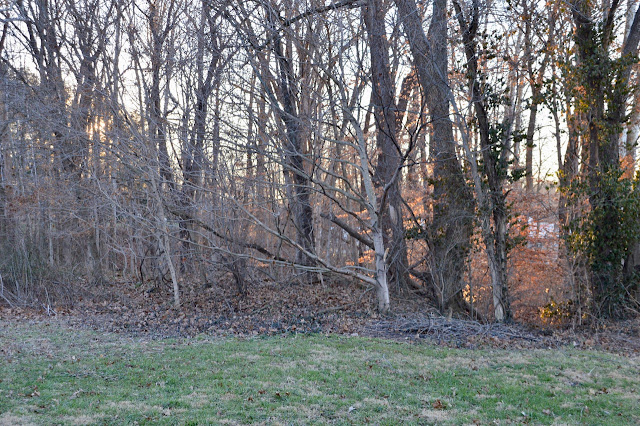 With Sadie bothering me lately earlier and earlier for her first walk of the day, I put on all my cold weather gear and we headed out a little after 9:30 this morning. It instantly felt colder than 31°. There were some winds from the NW that made a difference in the wind chill factor. 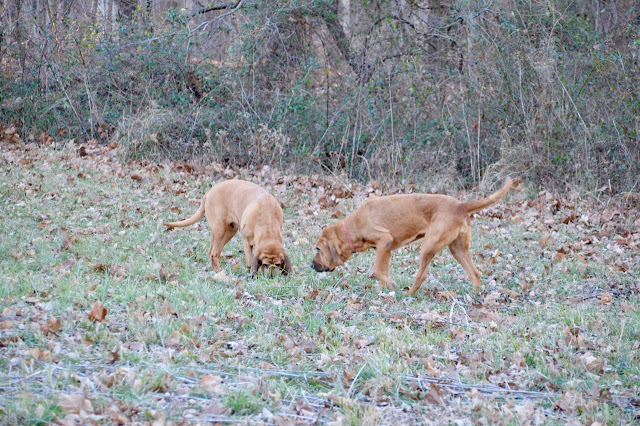 Yet, it was clear skies and sunshine so I can't really complain just because the temps were borderline frigid. After all we are not walking through deep snow or on ice. 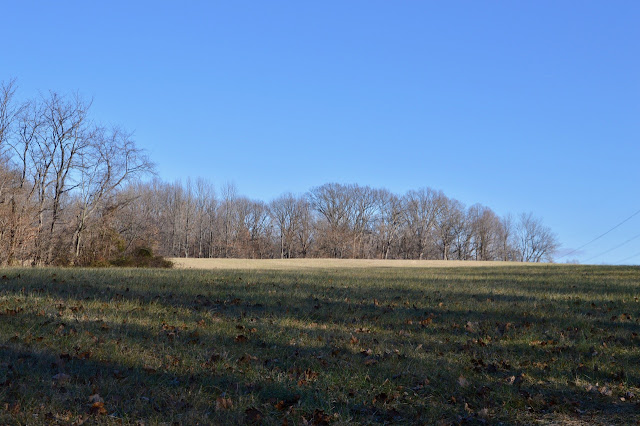 Stella ended up staying so far back that at one time I couldn't see her through the zoomed lens. I thought she might have moved into the wooded area but about that time I saw her rise up from the ground on the horizon. I didn't realize there was that much of an incline. 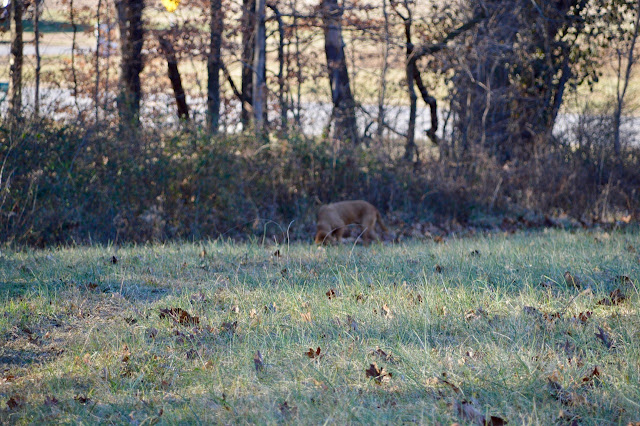 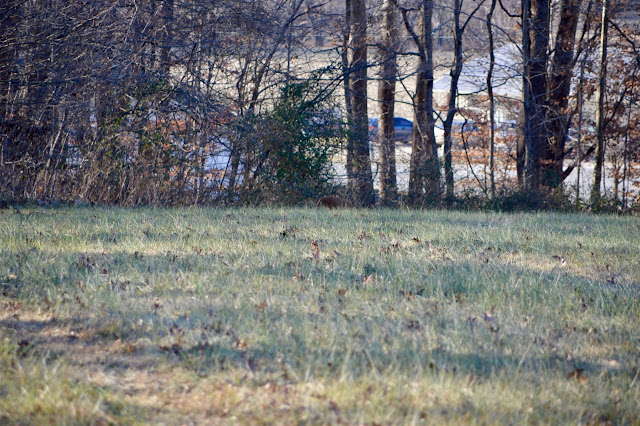 Sadie and I had already turned the corner, and once we made that turn ... it got a lot colder with a stronger wind. Once that wind hit me in the face I couldn't wait for the walk to be over. 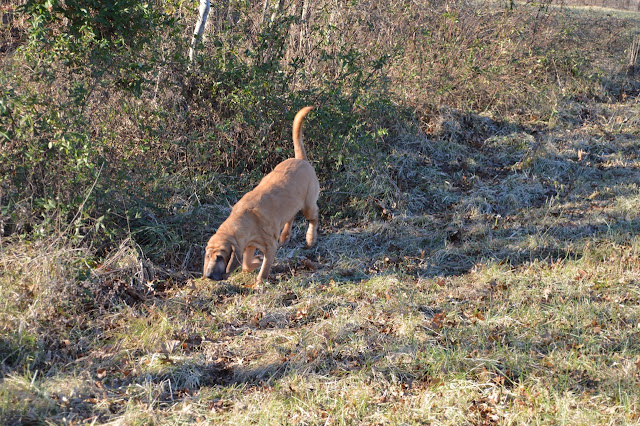 I had no idea that Stella was coming up behind me, so when I took this picture I was focusing on only Sadie ... when Stella ran into the view finder about the time I took the picture. Her speed was much faster than what the picture shows. 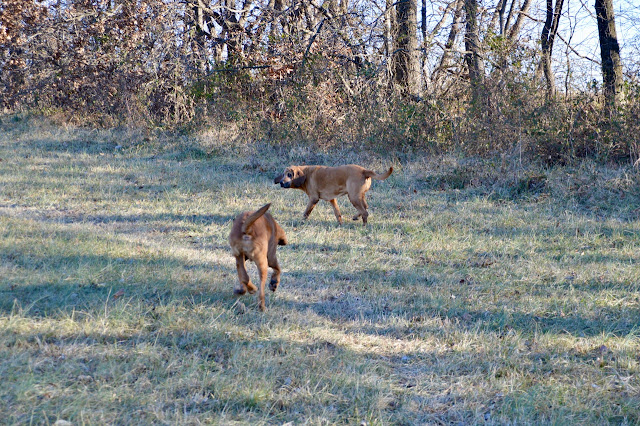 They explored ... I continued to walk. 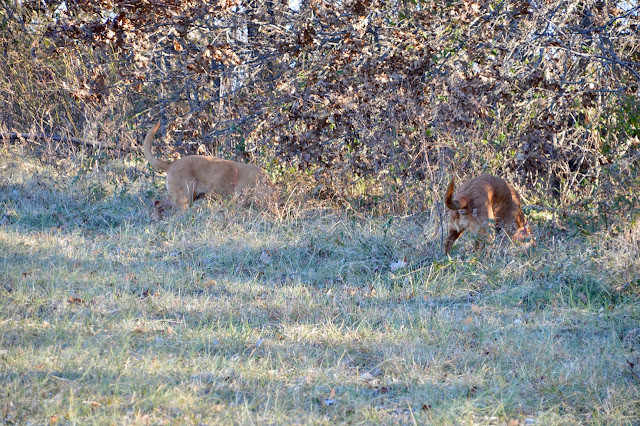 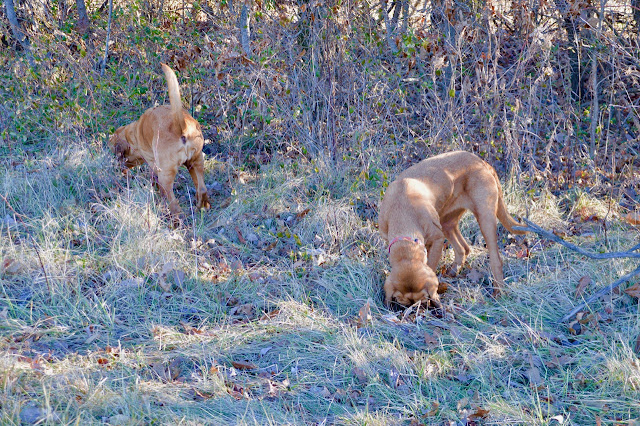 As we made the final turn home, they both walked so close to me that even the 18mm setting could not fit them into a picture. It wasn't long before they took off jogging in hopes of getting a little more exploring done before I got there. 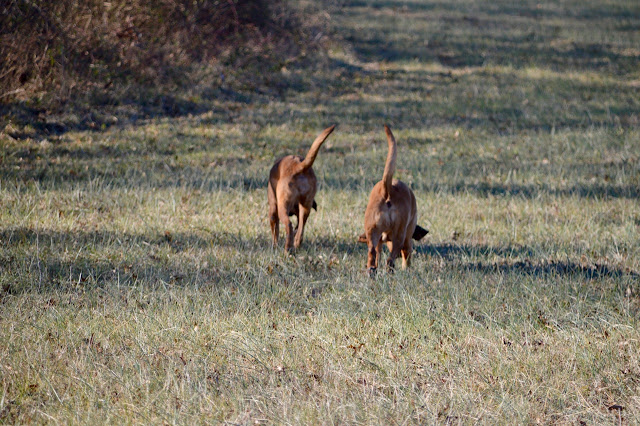 Stella has set another new record of letting me leave the house without her showing any signs of separation anxiety. That is always a good thing but even after 16 months I still wonder when the next episode will be. There has always been a 'next episode'.

After some late morning errands, they had their lunch when I got back and Sadie was 'demanding' another walk ... it had only been a couple of hours since her last walk. Once they get that after lunch walk in, they normally will sleep the rest of the afternoon in different spots inside the house. 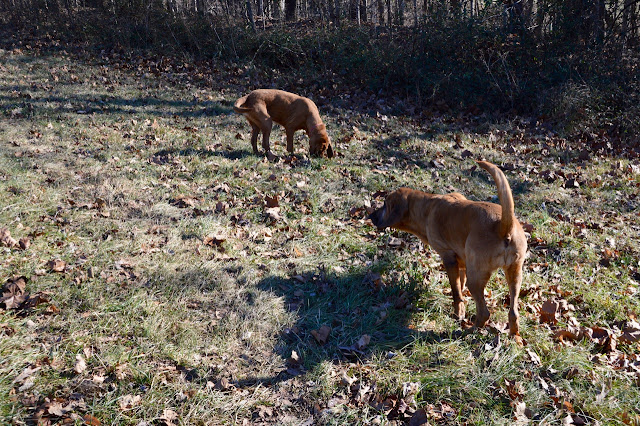 That is a very deep gully just a few feet into the woods. Luckily none of the hounds venture into that area because it is nothing but mud on the gully floor. 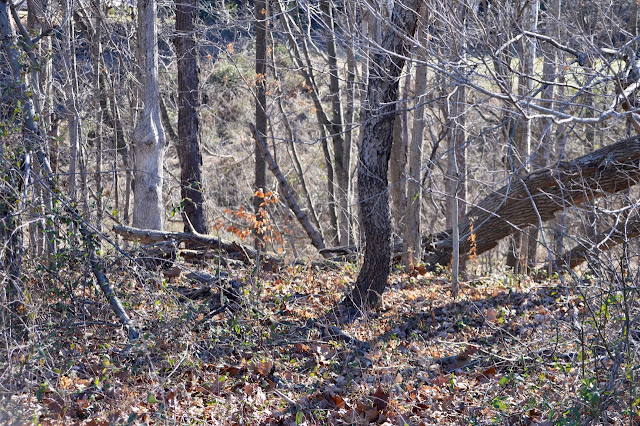 Stella took the lead for the afternoon walk. She was almost making the turn to the far right corner when I yelled the word "hey", she stopped and started heading my direction. 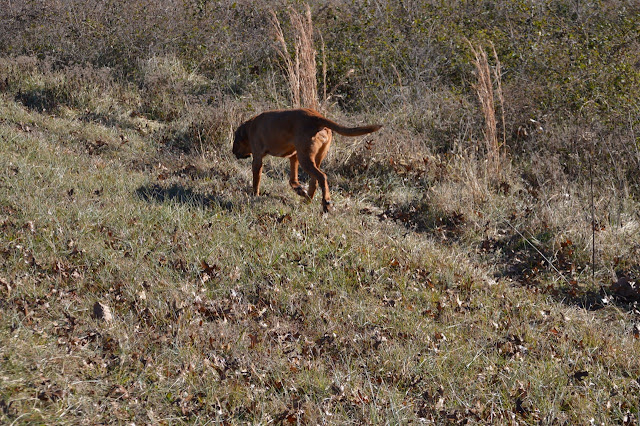 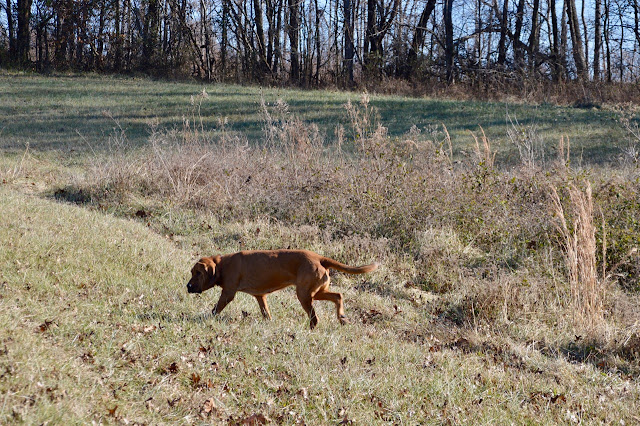 Then she and Sadie was off to the back edge of the field. 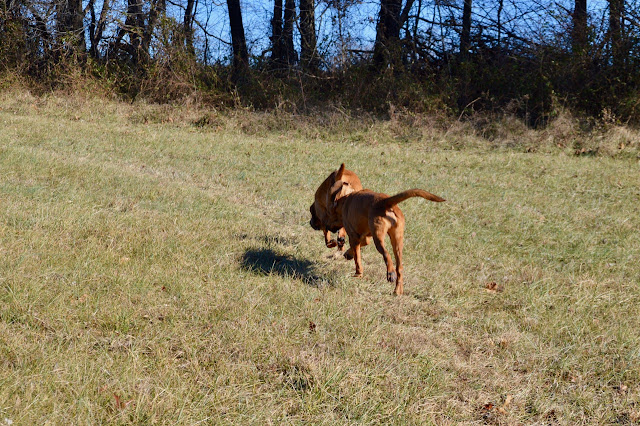 They both had a lot of 'nose activity' today. 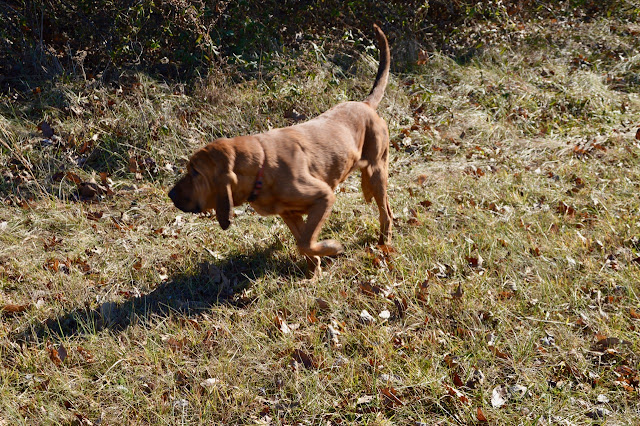 Two things that Sadie has always chased are birds on the ground and flying leaves. Today she was not only chasing the leaves that were bobbing around the field from the wind but she was also approaching those that landed, with caution. You never know when those leaves might attack. 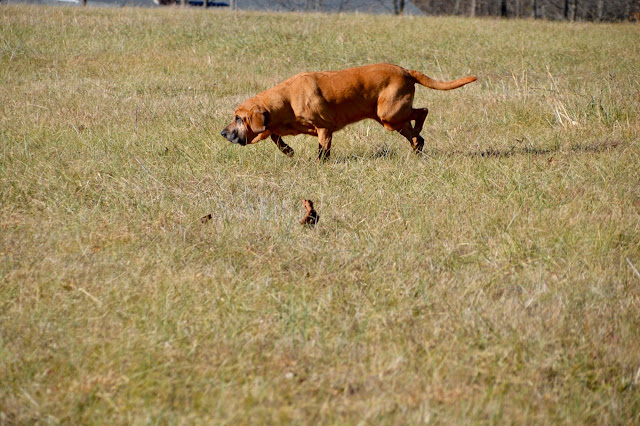 While I was watching Sadie and her leaves, Stella had almost snuck off to the 'no-fly zone' behind me. I had to go to the 200mm zoom because she was that far away from us. Something had her interest and she surprised me when she stopped and came when I called her. I thought for sure she had smelled something and was going to take off after it. 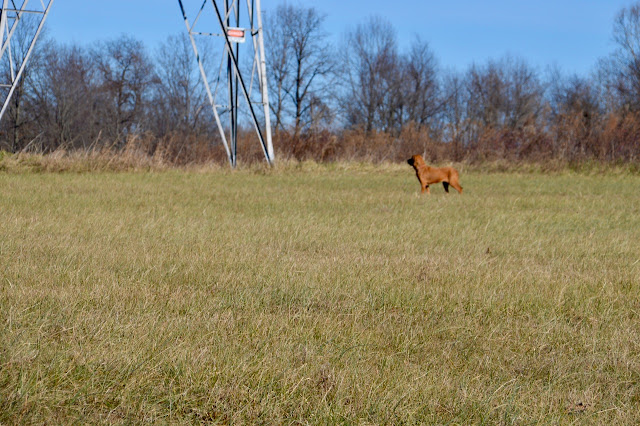 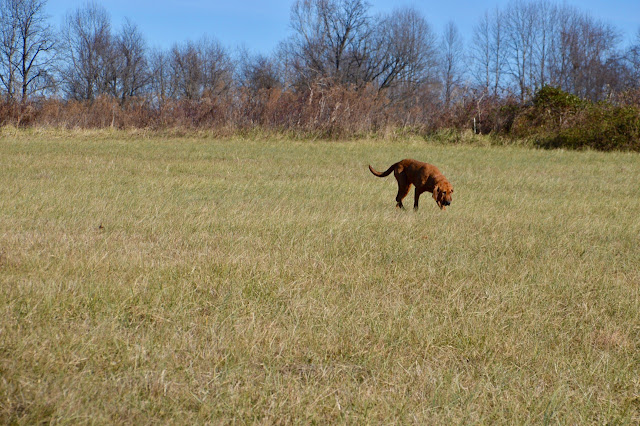 She is never happy after being caught trying to escape. 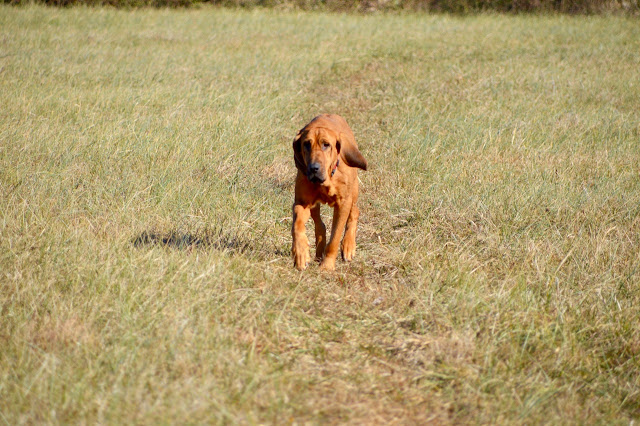 As we get closer to January 1, the college football bowl games have better matchups. I'll be watching college football for the rest of the afternoon and tonight it looks like. A crockpot of vegetable soup will be finished about supper time. Football and hot soup on a freezing day sounds good to me.

It would be a beautiful day to fly today ... not a cloud in the sky. 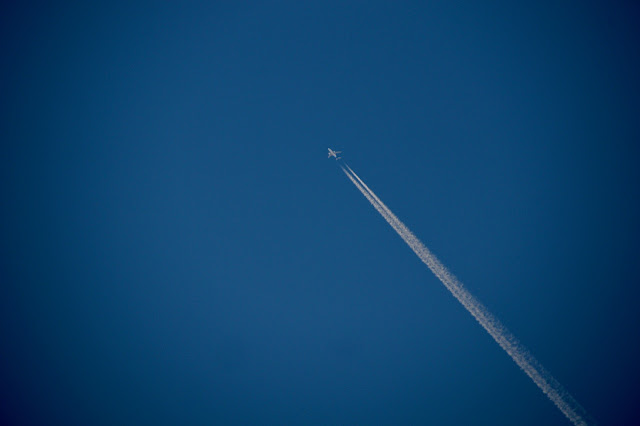 January 1st is right around the corner here in 'the tropics' of southern Indiana.
at December 30, 2016