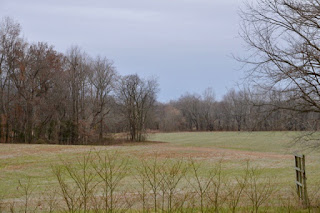 What a difference an increase of 10° means to feeling comfortable. No, not inside, outside .. 35°

With the skies looking like snow was on the way from the west, it's not, it almost felt warm ... too warm.

While Sadie and Stella roamed, I had a cup of coffee while sitting outside. Following a recent trend, I decided to take the hounds for their first walk of the day between cups one and two. No need for the ski gloves and down jacket today .. the wool North Face jacket was perfect. 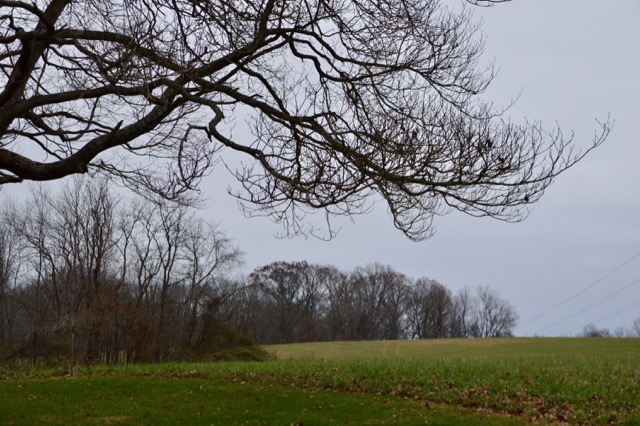 Once Sadie is outside she is always in the tracking mode. She rarely sits outside and is always on the move because there are too many scents for her natural heavy duty nose. Whereas Stella will sit for almost an hour outside depending on the sun, direction of the wind and if she needs a nap. 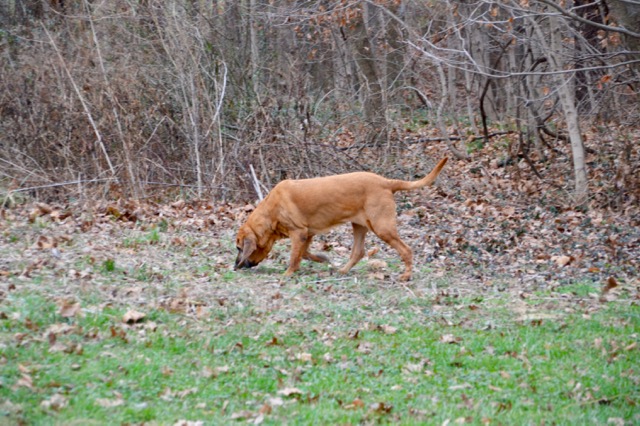 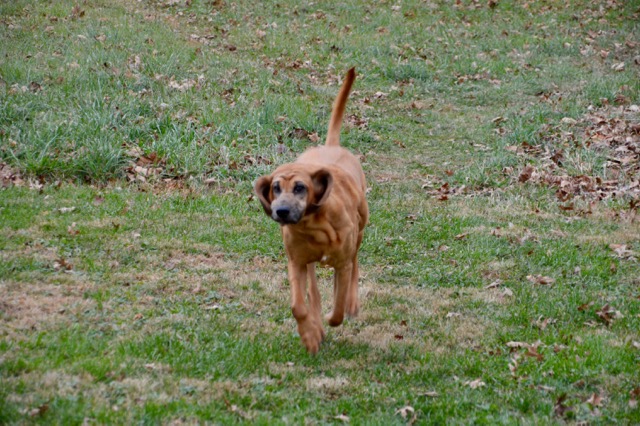 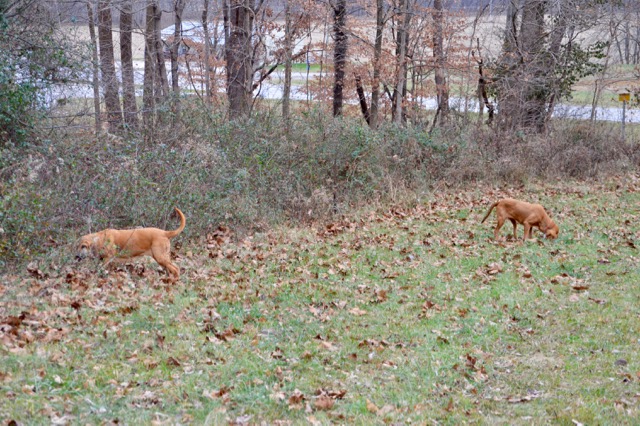 I figured as long as I did not see rain drops, I'd continue as I was pretty sure it was trying to snow. Stella had other ideas though ... she didn't move. 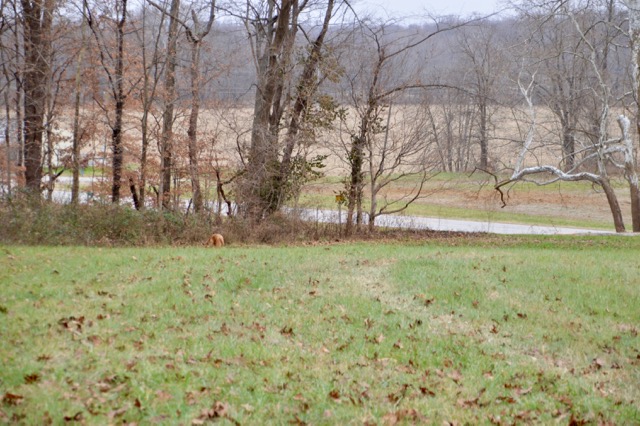 It does not matter if Stella is on the walk with Sadie or not ... Sadie doesn't care and will always follow the path of her nose. She is always active. Some of you may remember I have mentioned before that a bloodhound breeder I know gives her puppies a test at 45 days old and can tell if they are going to be 'trackers' or 'couch potatoes'  ... I answered 4/5 questions positive over the phone when Sadie was about 2 years old and a 'problem child', finding out she passed the test as "a very strong tracker". 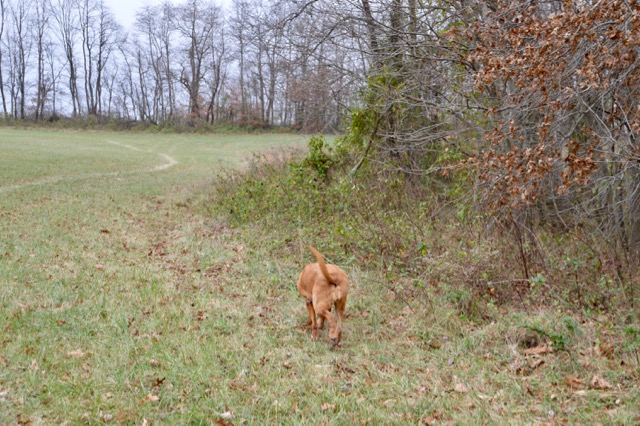 She said the first sign would have been when Winston and I visited the litter of puppies when Sadie was 8 weeks old. Out of 7 littermates, Sadie was the only one that followed Winston everywhere he walked ... she wouldn't leave his side. A few weeks later I changed my mind on which pup to take and took Sadie home at 12 weeks old. The rest is history as they say.

No sign of Stella ... all to familiar isn't it? 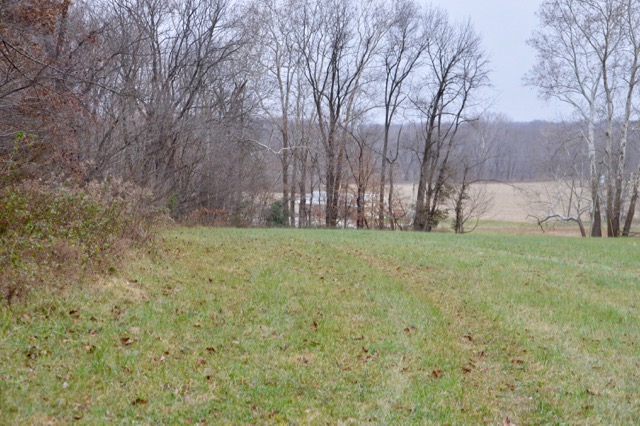 That 'noise' had stopped until we got to the first turn. Once again the sound was loud but I didn't see anything bouncing off the leaves, if it was snow. I didn't see rain drops either. But when I held the palm of my hand up ... there it was ... the smallest ice crystals you could imagine were hitting my hand. 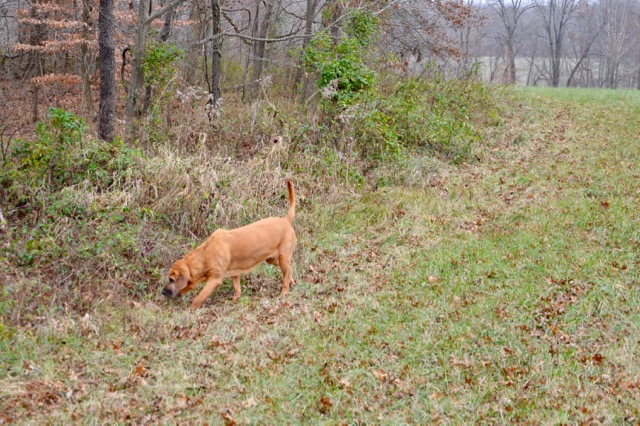 I continued walking while holding the camera so the lens was facing down to keep it dry, only raising it when taking these 200mm zoom pictures. 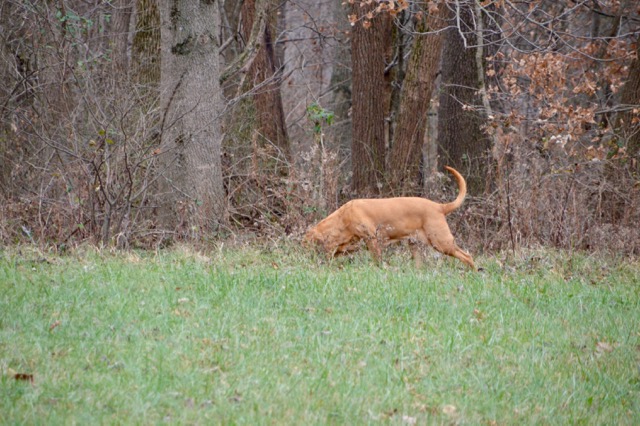 That shows just how far away the hounds were this morning. 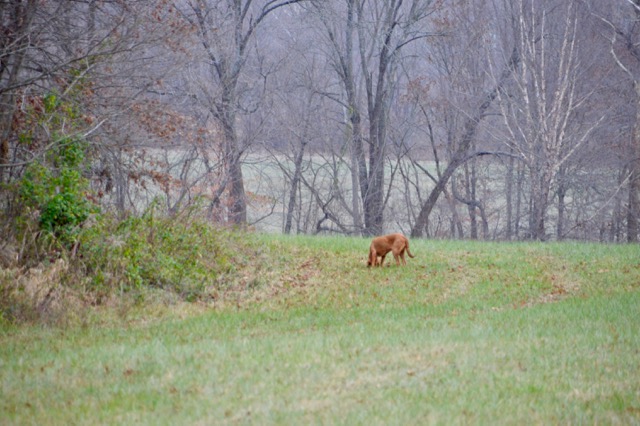 Sadie never looked back for Stella ... and Stella never moved from that first corner ... never. 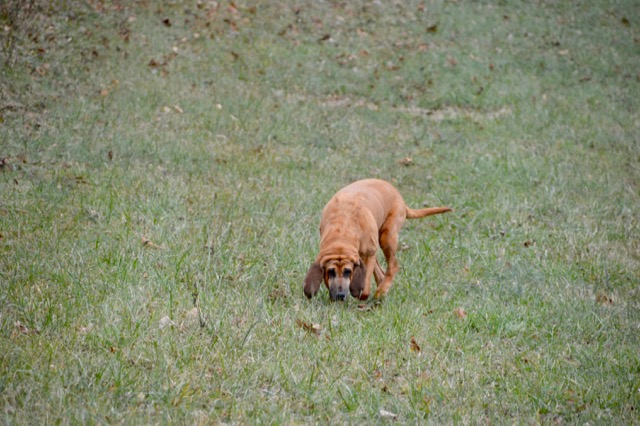 What's interesting, the times I have walked over and leaned over to see what is so interesting to her ... she has moved the thick grass back to ground level and nothing is there ... maybe the 'protein pellets' as Russ calls them, are gone by the time I look. 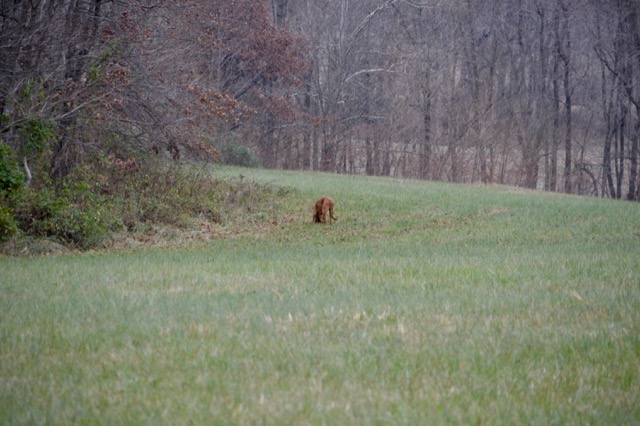 In the meantime Sadie checks deeper into the small wooded area that runs along the back of the field along an old fence line. 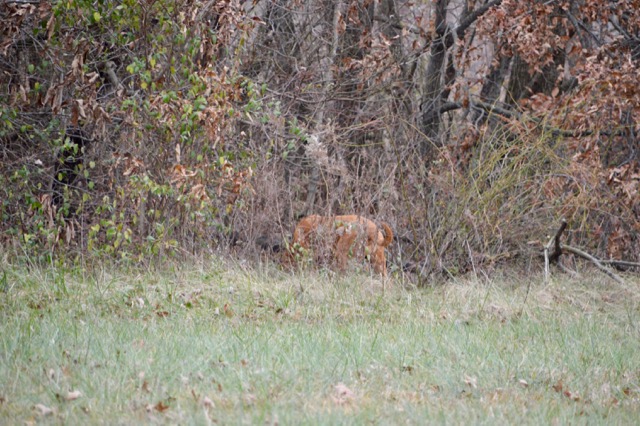 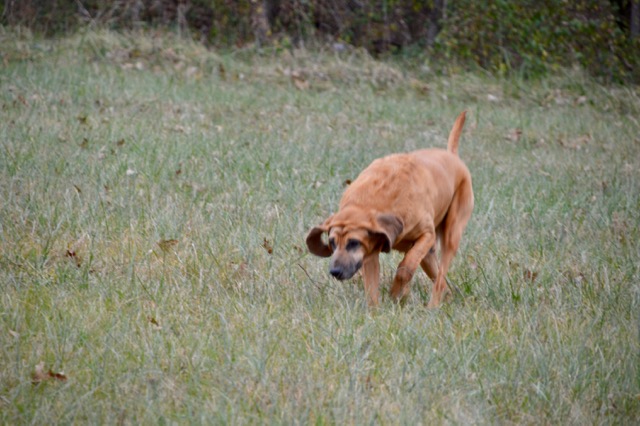 As Sadie and I make the final turn to head home ... Sadie has moved about 50' at the most at the first corner. 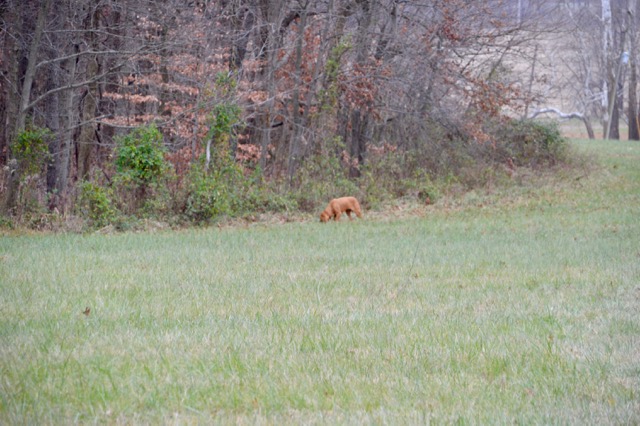 The closer Sadie and I got to the corner, I was sure that Stella would take off for the far right corner in back of the field ... but the shock of the day ... she slowly walked over to me and Sadie and then trotted along side me out of camera range. 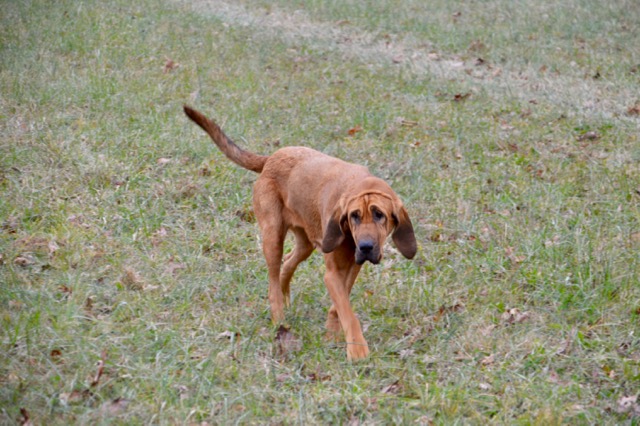 She did her ultra slow walk all the way back to the yard ... up to the door to go back inside. She was walking so slow you would have thought she couldn't make another step. Maybe the walk was too early in her day for much energy. 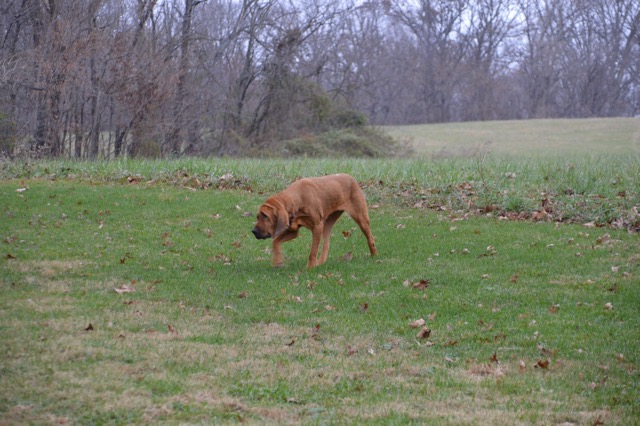 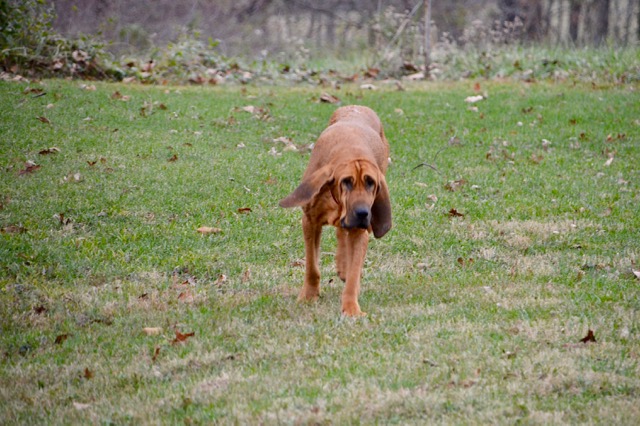 With light rain falling by 10:30am and a forecast that looks like it will happen all day, I have three good NFL games, back to back, I want to watch and that will take me through Sunday night. So not much is planned for the rest of the day. We will get in a 2nd hound walk between games or at halftimes if it is not raining.

Before I go there are a few of you probably wondering about that car transaction??????

By late Saturday night I was starting to feel the thrill of the search leaving me. As I looked through my pictures of the Z4, I knew there was no way I was going to sell that car this spring, therefore me getting down to just one car isn't going to happen. I can't remember the last time I even had just one vehicle, as I have always had two or more.

Then a strange thing happened and actually it happened last night around midnight. I realized around midnight while looking at the domain name of the car dealer's website ... that I may have sent my email full of pictures they needed to give me a trade in value estimate to the wrong email address that was given to me over the phone ... their website domain was not the domain I emailed those pictures to Saturday afternoon ... that is the reason I never received a call back from them.

So I resent that email of pictures to what I thought was the correct domain and then I went to their contact page and sent an email through their system explaining what happened.

So here I am Sunday morning drinking my first cup of coffee, I've deleted all of the pictures I had downloaded of the 2012 Mini Cooper Countryman (for a bigger view) and was 99.9% sure I was not going to pursue the transaction any further.

We return from our walk and there is a new email in my inbox, from the buyer at the car dealership confirming that yes I had sent my first email to the wrong address and he did not get the pictures of my FJ until I sent that second email around midnight.

The 'interest' shot back through my veins like a Christmas morning and a stack of presents. Would the first NFL game at 1pm be able to distract me and possibly rescue me from this mind changing catastrophe???

We will see ... I have another three hours to think about it before football takes over my focus. They lowered the price again for a quick sell on Saturday morning, it has been detailed looking like a new car as are all their other cars and trucks on the lot ... along with 40 years of good customer feedback. The four hour drive would be almost all freeway driving ... with possible snow.

I've wondered why the Black Cherry FJ hasn't grown on me these past 46 days ... where as the Voodoo Blue was a hit with me the very first day. Maybe I am just tired of having a FJ. I do know the test drive I took in a different one than I am buying but the same year ... was very good. I liked that car even more after the test drive.

There is only 2" difference in ground clearance compared to the FJ ... but I'd have to go off road to make that any kind of factor.