The Hounds Missed The Deer 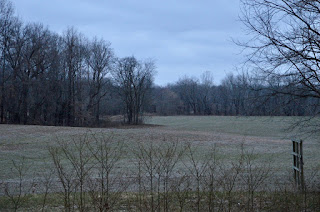 I admit today's post title may be a little misleading. I'll get to the specifics after this short weather intro ... but it was a different kind of deer chase today.

The weather forecast did exactly what it said last night and this morning. From 46° yesterday in the late afternoon we were sitting below 15° around 7:30am and very little if any snow. Unlike 70 miles north of us, it's a different story. 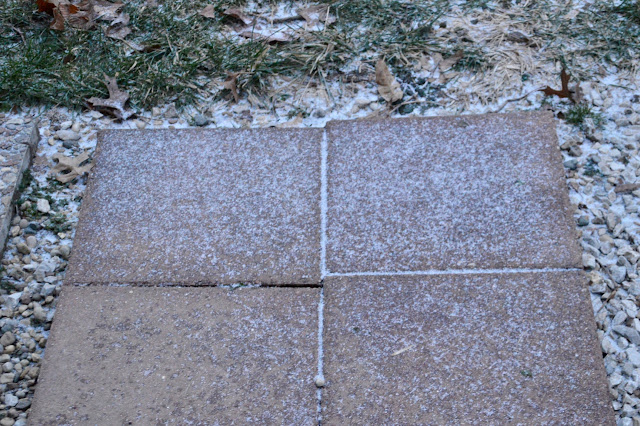 Looking at Wunderground weather it wasn't going to get any warmer than 18° and it was already 'up' to that range by 9:30am, give or take a few minutes. With that in mind I decided we'd get our walk in and it would probably be the only walk of the day. These kind of temps always make me cautious, wondering if it's too cold when I consider some their paws coming down with frostbite.

What was the difference in this deer chase today compared to the other 5 or 6 we have had this summer and fall ?? Well the hounds were so busy with their normal exploring to start the walk .... 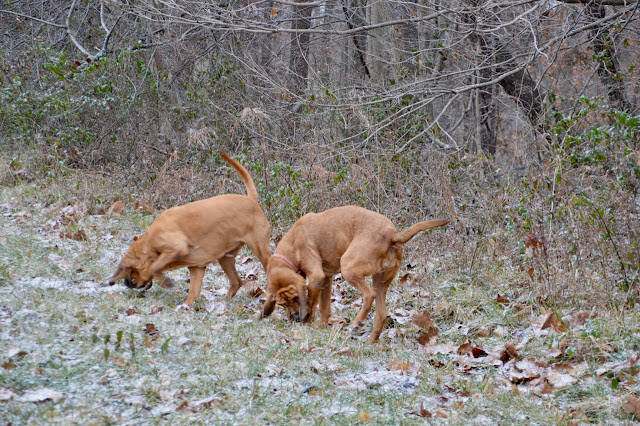 They didn't see the deer that jumped out of the woods at the first corner turn we make and in fact didn't even catch their scent until they got to that corner. 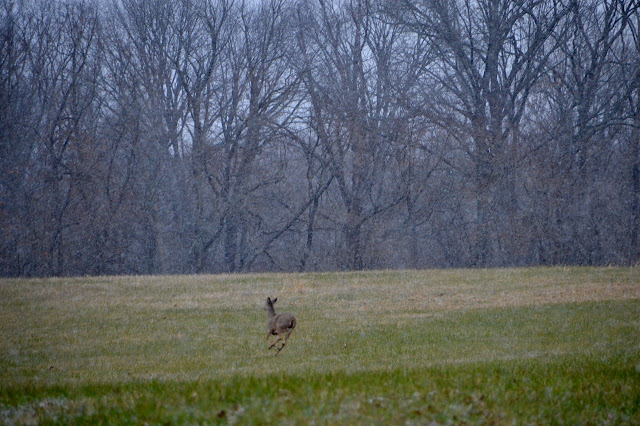 By the time the lens focused in this freezing weather, it did hesitate, this 2nd picture was the last I saw of the deer. They were so fast and quiet, neither Sadie nor Stella even raised their head and took off like they normally would have and have in the past. 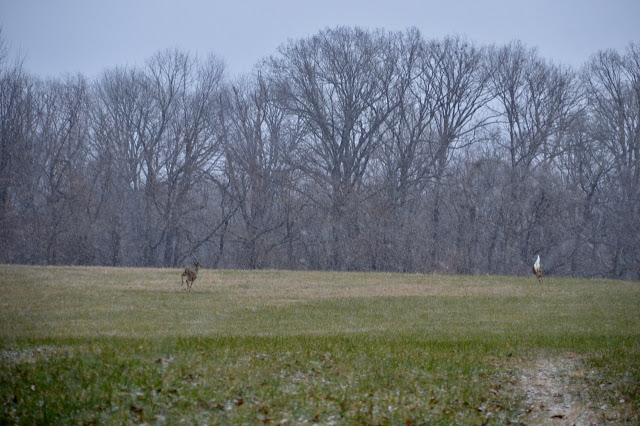 They continued along the path not yet to that corner. I was prepping my camera in anticipation they would take off sprinting in the direction of the deer once that fresh scent of just a few minutes ago came up on their radar .... didn't happen. 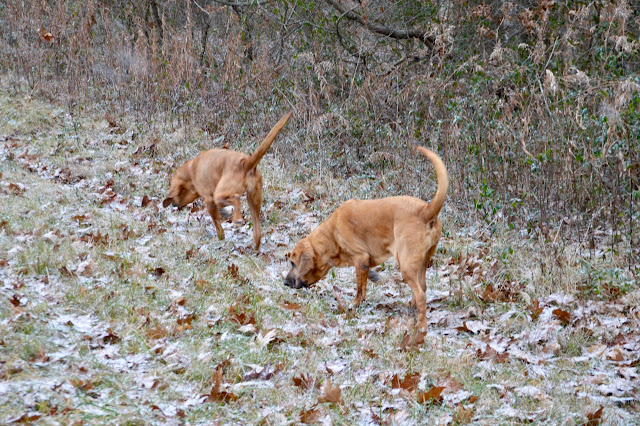 It didn't happen even when they approached the corner well within the place the deer jumped out of the woods. Has 18° frozen the abilities of the bloodhound's accurate and powerful nose?? 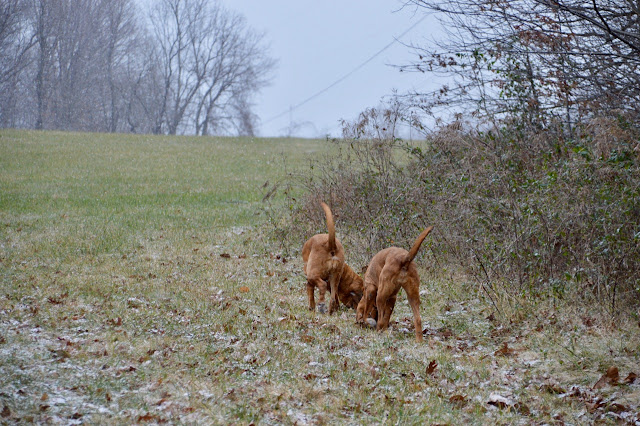 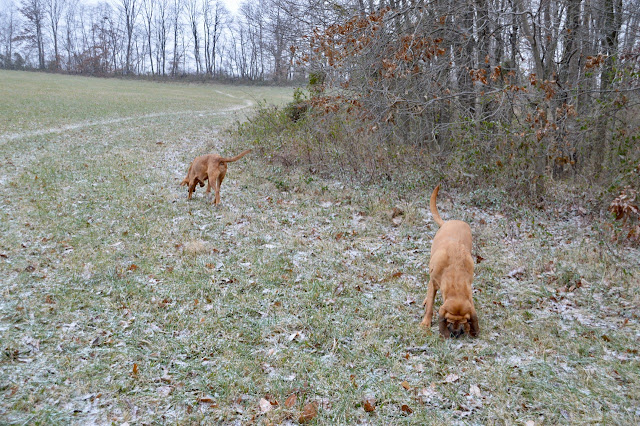 Then they take off sprinting !!! But wait ... the deer ran 90° left of where these two lost bloodhounds are running. What's up with that?? 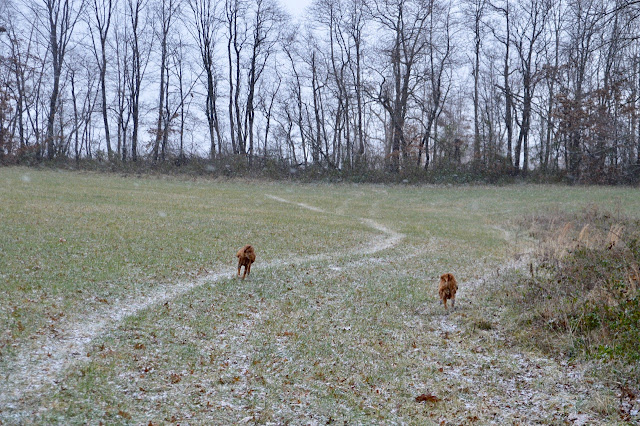 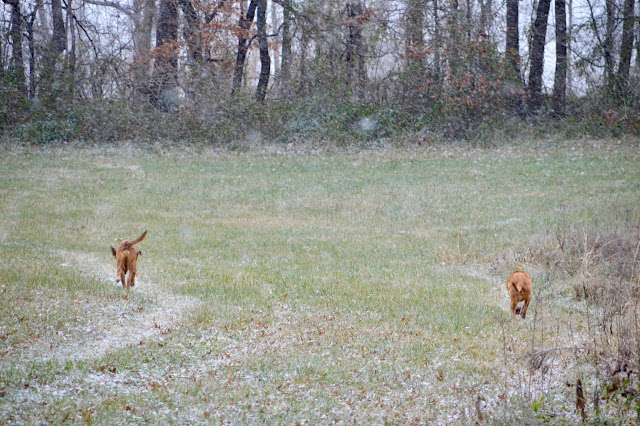 Flying down the backside of the field, not even close to the path of the most recent deer. There was probably a lot of deer activity earlier this morning along that path. 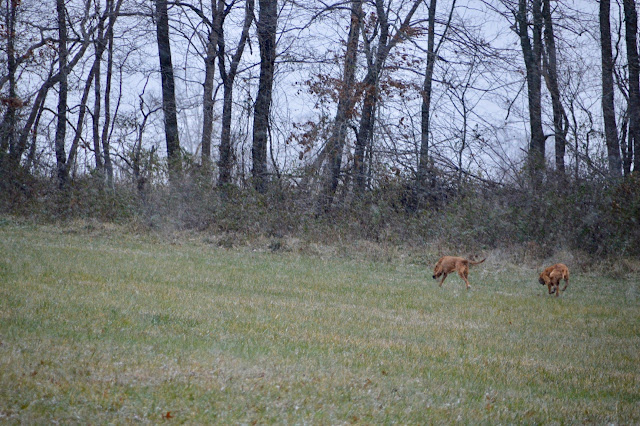 A look of confusion, after all they are not 'problem solvers'. 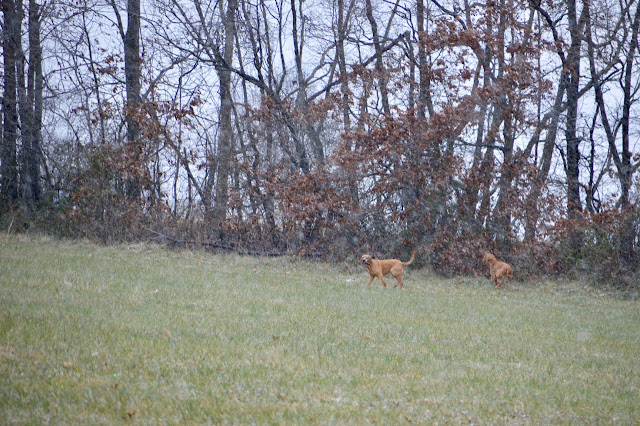 Yet they are sure they are just about ready to catch their deer so they continue to sprint in to the "No Fly Zone". 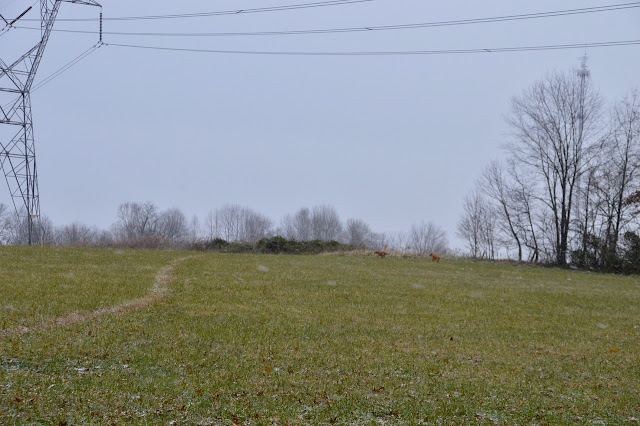 I don't have a problem with that. I change my direction off the path and start walking to my left so I can get on top of the small incline to have a better view of where they went and where they are. 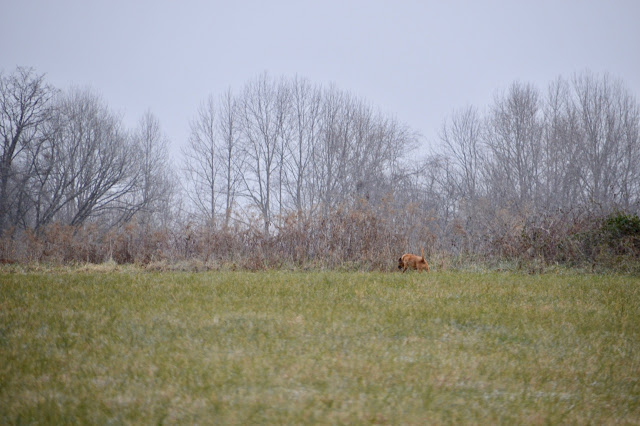 But they stopped way before that and turned around just past the base of that large electrical tower. 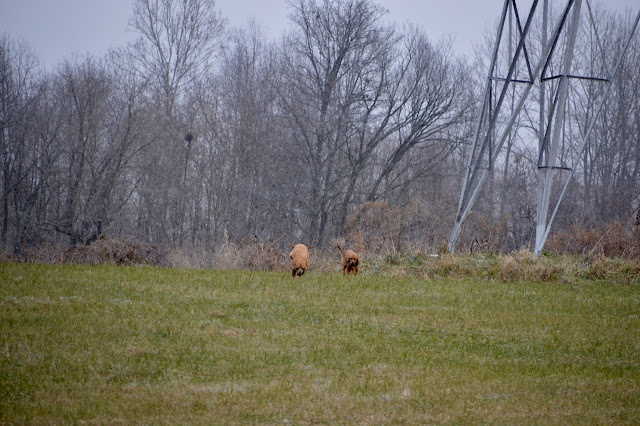 Sadie looked as if she was still pretty proud of her chase, while Stella looked pretty disappointed. She is the one that normal is in full pursuit of the deer she chases. 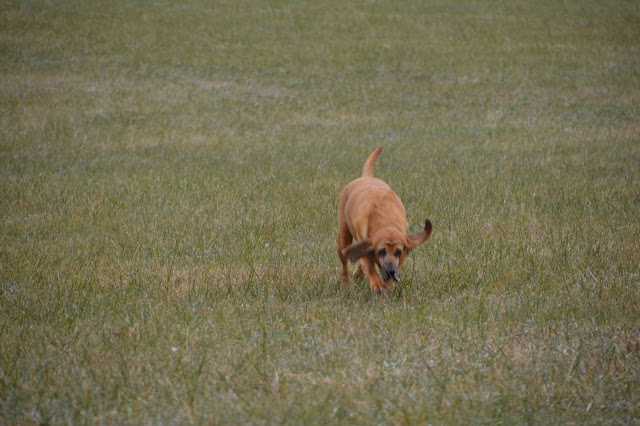 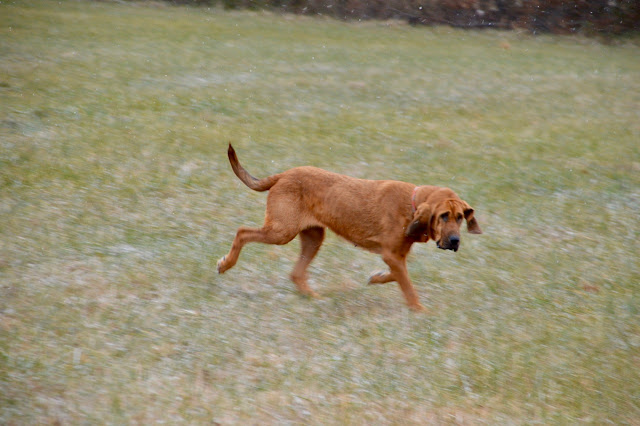 They still took one last look for any possible new deer before heading back inside. With the unexpected run, we cut the walk short right after and headed home. It was too cold for them I guess as they both sprinted for the house. 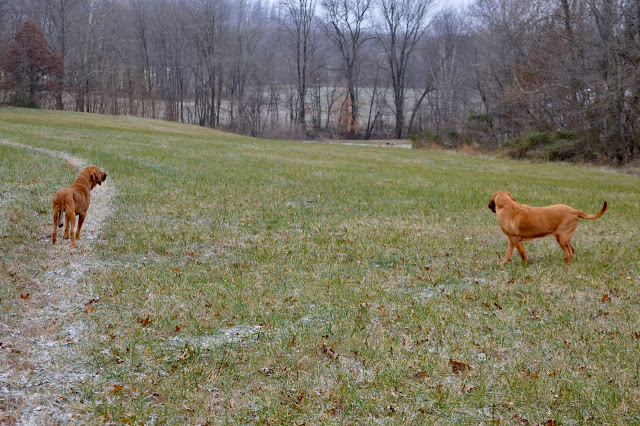 Temperature started to drop soon after lunch. Heidi made an appearance long enough for me to take her picture as she trotted back to the house but she wasn't out very long when the windchill was 5°.

{Forgot to add the picture when I published the post} 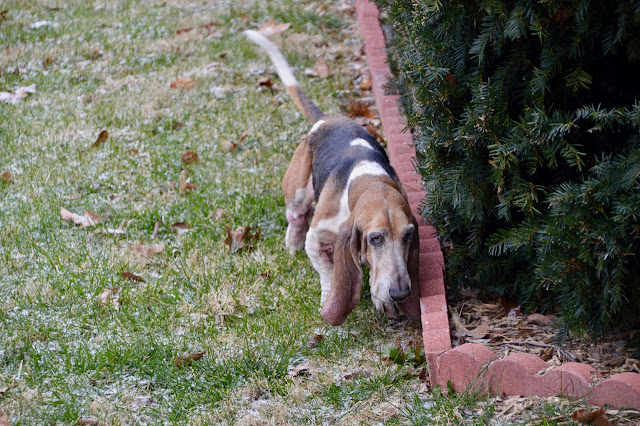 We didn't do much after that. All of them slept, I watched NFL football games. Stella tried to get me to feed a third time around 5pm by howling like she does if I miss her lunch time. Only today, I did not miss their lunch time. I couldn't figure out any other reasons that would cause her to howl like that.

The weather experts were right when they predicted this would be a "colder than normal" winter. We are way below our averages but at the same time because he have not had any snow like other parts of the USA have had, nor any ice storms that can cause damage or take out power.

I noticed the dealership where I traded the FJ did not have it listed after adding some new cars to their inventory online. I guess they could have sold it in one day but more than likely they took it to the car auction to get rid of it. My old blue FJ is still for sale at the Indy Toyota dealership.

This new used Mini Cooper is working out great for me. There will enough room for anything I need in back, the ride is nice and the mpg is great.

We are staying warm her in 'the tropics' of southern Indiana, even in the low single digit windchill temps.
at December 18, 2016
Email ThisBlogThis!Share to TwitterShare to FacebookShare to Pinterest
Labels: Deer Chase, Deer Sighting, Freezing Temps