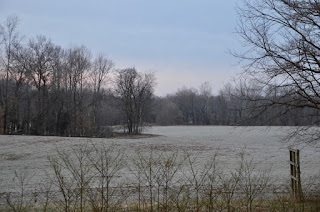 I am not sure why but for some reason on this morning's walk it felt exactly like a time on a Saturday or Sunday morning where my two basset hounds and I would take a walk while living on Whidbey Island, WA.

They were Harry and Arthur. Since we had only room to walk along the side of a country road and streets leading to the neighbors nearby, both had to be leashed and that 'splitter' someone invented was valuable in the early 1990's, as I could walk both with one leash side by side.

Harry was my first basset hound ever and was bought as a puppy in 1987. Arthur is dressed in the tri-color while Harry was mostly white. That's Arthur in front. 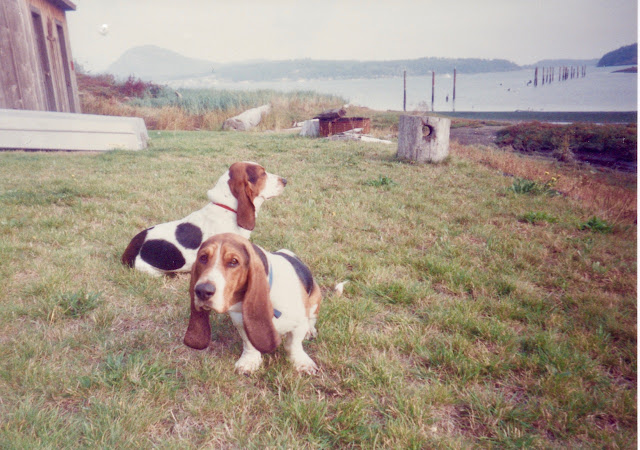 Harry was a 'wanderer' at all hours of the day or night and continued to be after we moved into the house I live in now, in southern Indiana. How he ever survived to live 13 years is beyond my imagination. 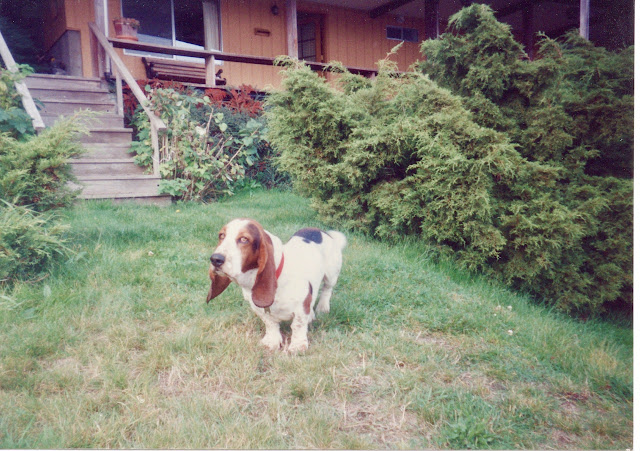 They were not from the same litter and were a couple of years apart but got a long great as two males. They never had a fight over food or a favorite bone. 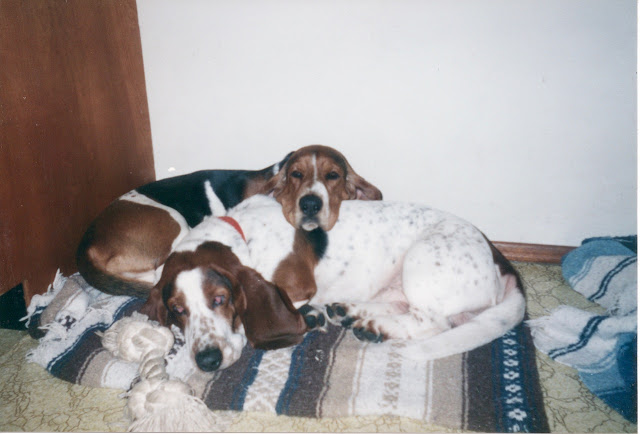 This place was one of two of the best places I had ever rented. I rented a small apartment on the first floor of a waterfront house. The porch ran the full length of the house and we would walk out on that small spit that is shown in the water. If I remember correctly that is Hope Island straight ahead. Deception Pass Bridge would be around the corner to the left ... a few miles down. 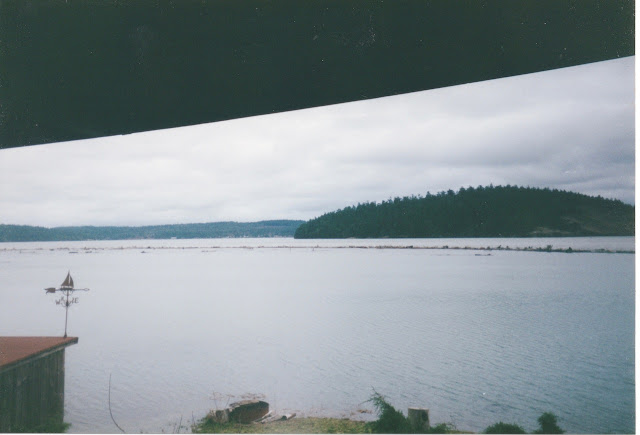 Back here in 'the tropics' this morning the weather was perfect for a walk. After yesterday's surprise visit by people and their dog, I was wondering what the hounds would do once they picked up that 12 hour scent. Would they go back into the wooded area or take off for the neighbors house? 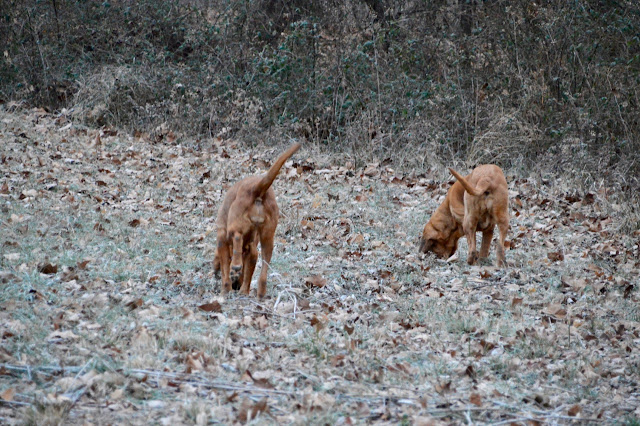 As you will see from the progression of the pictures, they did neither. Yet it was a day where both of them decided to hang back as I continued my walk. Not a word was said today, I let them do whatever they wanted while I walked the path which I am told can be seen on Google Earth. 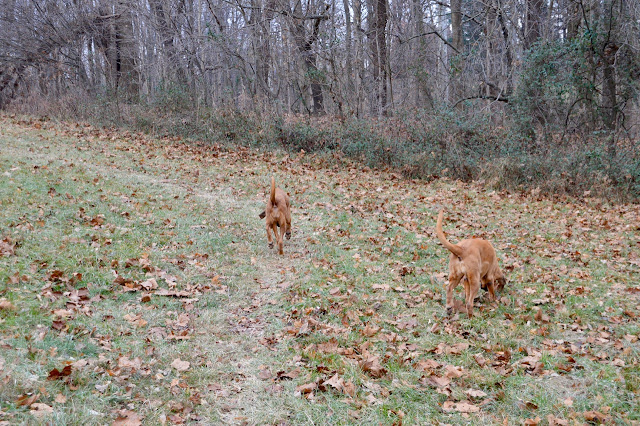 All of these pictures show them closer to me than they really are. I could tell by this time and very early into the morning walk, that neither hound was going to keep up with me. 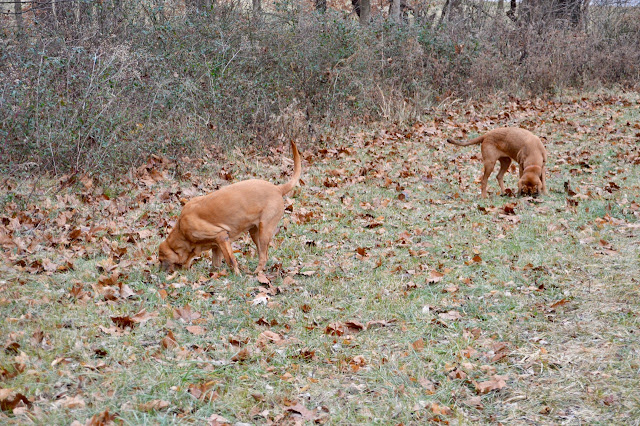 I decided as I walked further away I would take some pictures in hopes of showing a progression to where you could tell just how far they were falling behind. 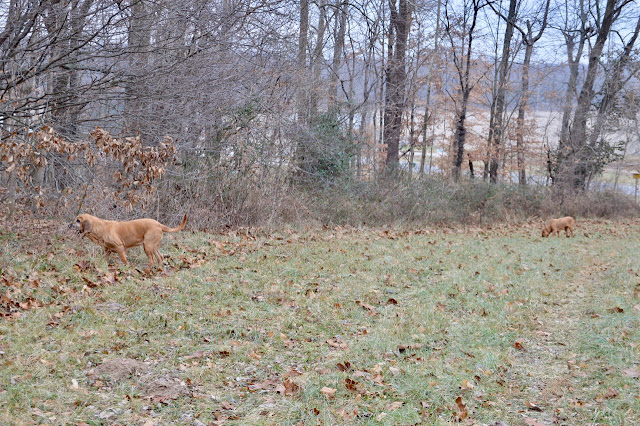 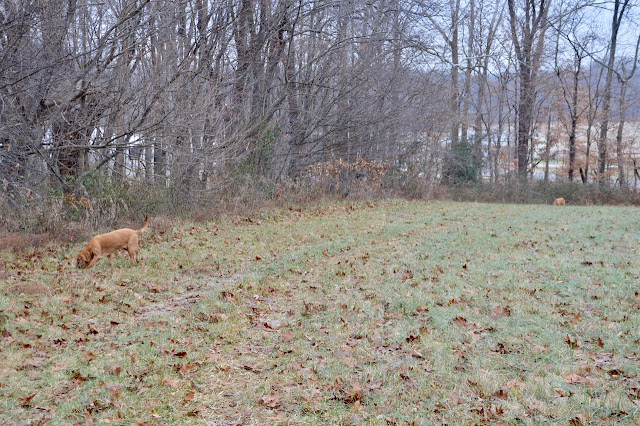 At this point in time I am about to veer right around the first corner of the wooded area. I took one last close up of Sadie before I moved out of view. 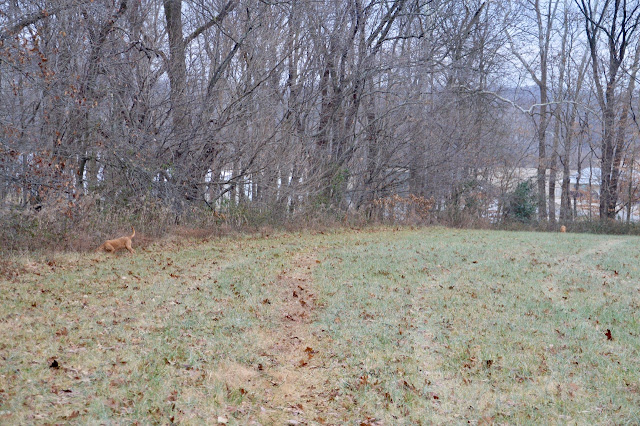 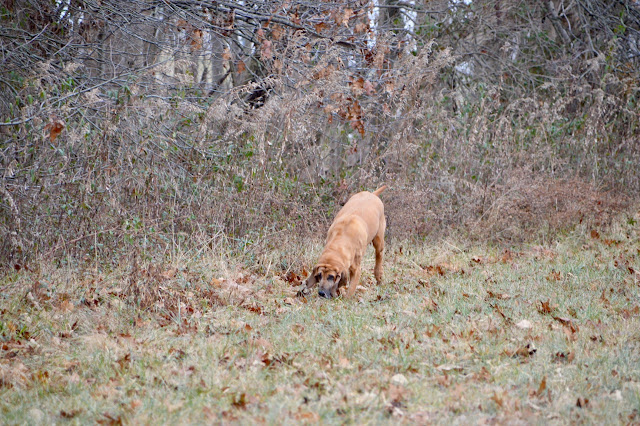 Stella is far back in the distance and just as I was about to stop and turn from taking pictures my viewer picked up Stella starting to run to catch up. 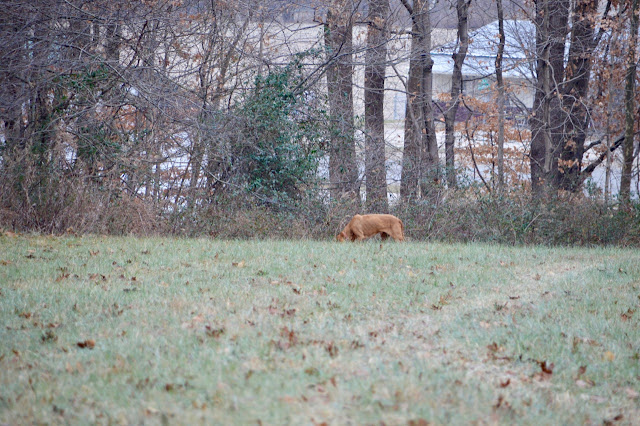 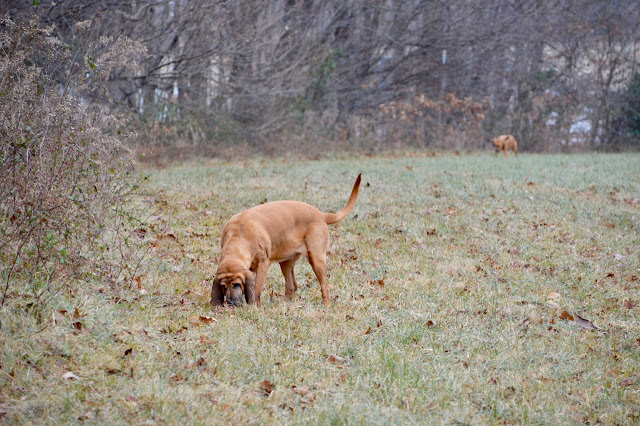 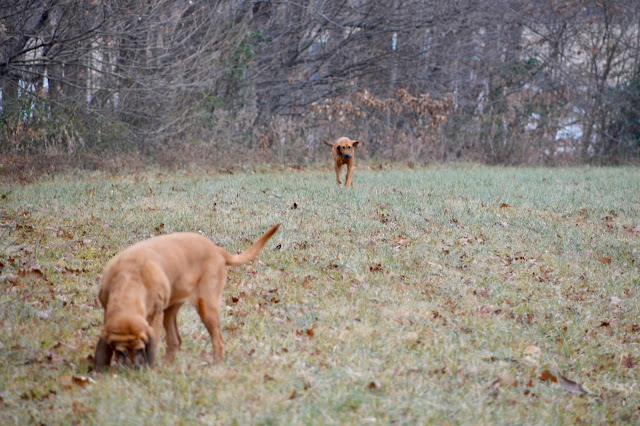 Catching her in the middle of a trot shows her nonchalant attitude very well. It's what makes her a great bloodhound with a funny personality. 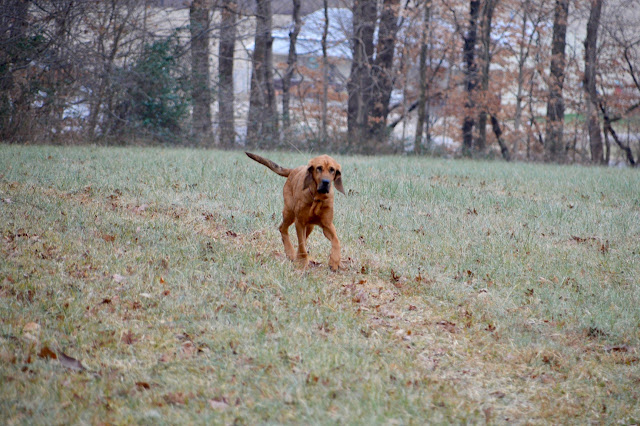 Evidently Sadie had found some very valuable protein to add to their diets. It took a while for either of them to move from that spot. In fact by the time Sadie did I was already walking along the back edge of the field. 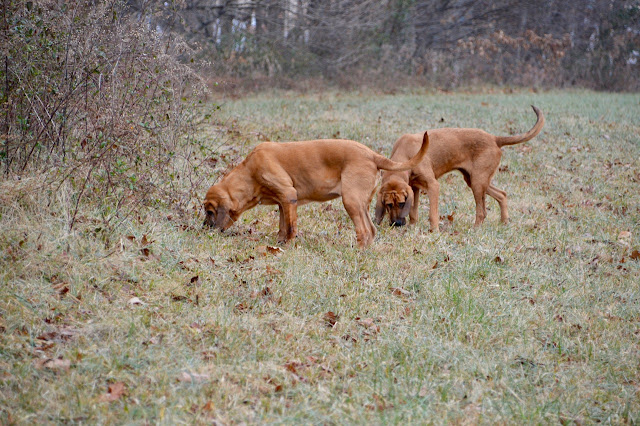 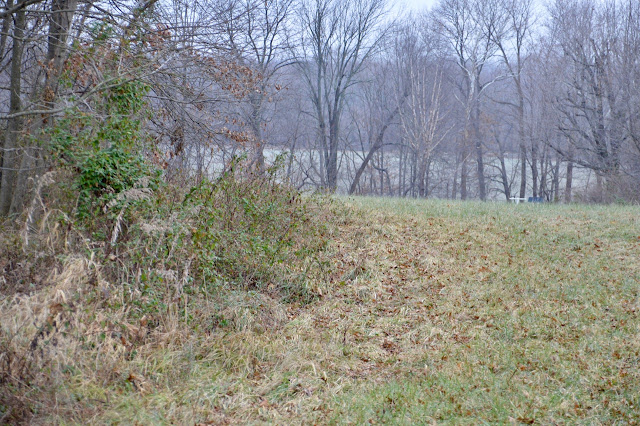 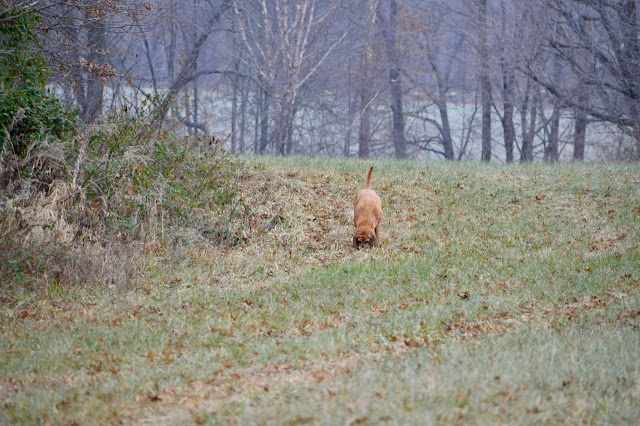 I think Sadie caught the same scent directly on our path as she did yesterday. Only this time I am way in front of her. 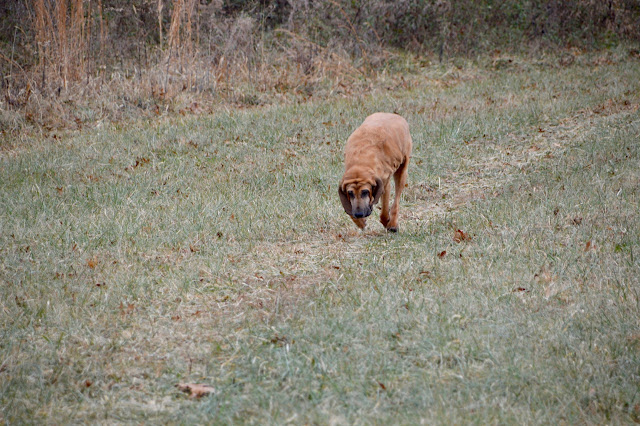 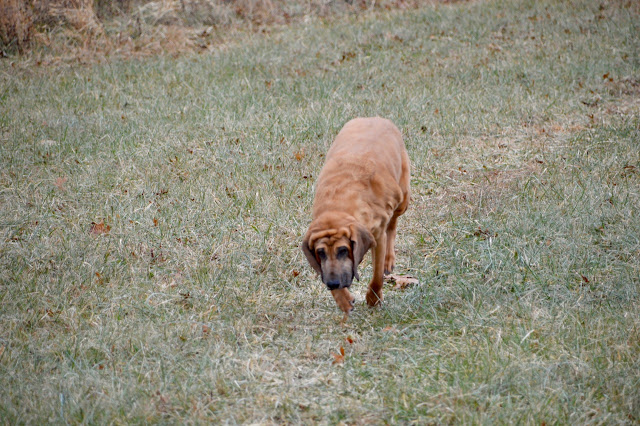 I've seen this next picture many times before, where there is no sign of Stella. Today I was a little concerned that she might have picked up the scent of the other dog from yesterday and had headed into the woods in the opposite direction we were walking. 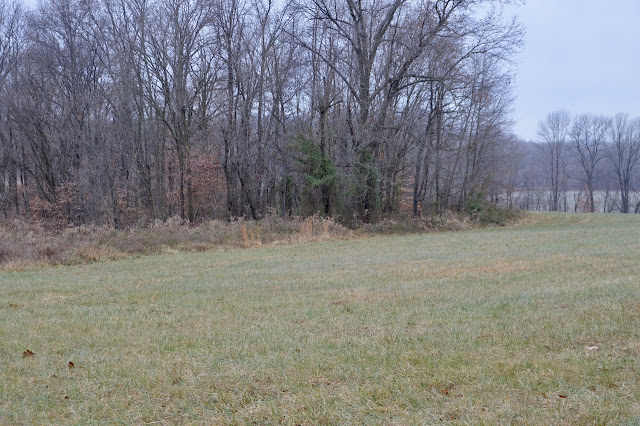 In the meantime Sadie was up along the fence line along the back edge of the field. Stella was nowhere in view. 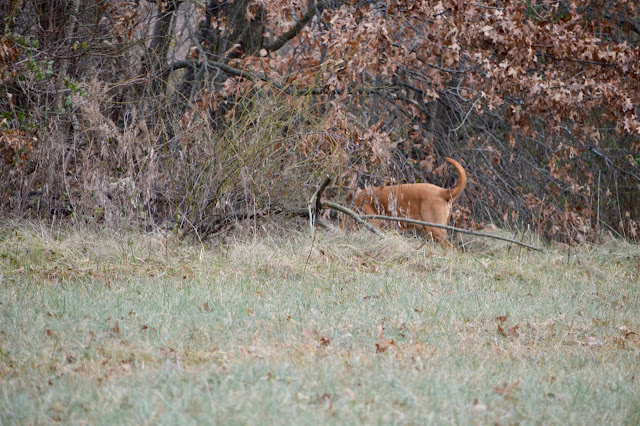 About the time I had conceded that I might have to go into the woods on the way back to find Stella or at least call her ... she came running around the corner. Sadie flew by me at a full out sprint to see who that 'strange' hound was up ahead. As usual she touched noses to make sure Stella was okay. 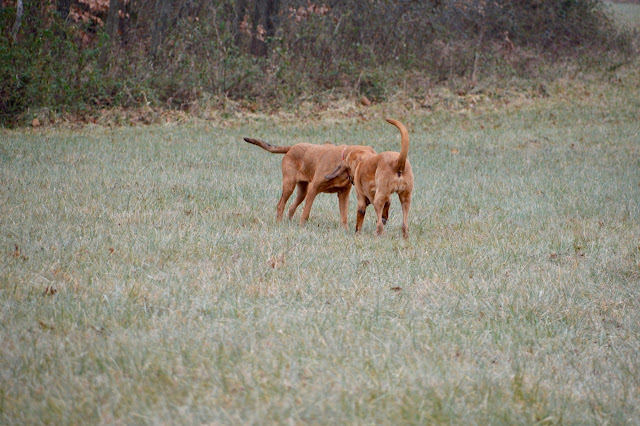 I am not sure what got their attention here, I didn't hear any gun shots nor see anything moving on the horizon. I was told yesterday while talking to the neighbor we had just missed about 10-15 deer grazing in the cornfield behind the field we walk in. They are looking in that direction. 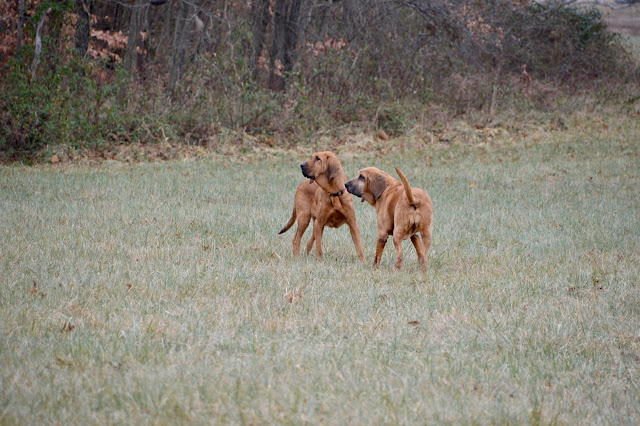 Stella decided since she has 'checked in' with me, that she is going back to that spot that took up most of her time on the walk this morning. 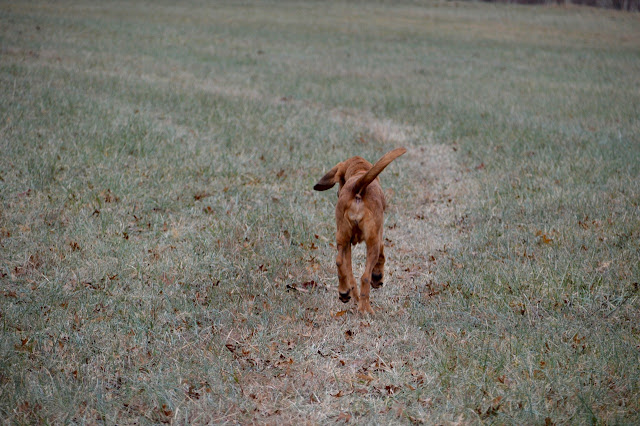 She beat Sadie to that spot but it wasn't long before both of them were there munching away ... I kept walking toward home, not wanting to see or know what it was they liked so much. 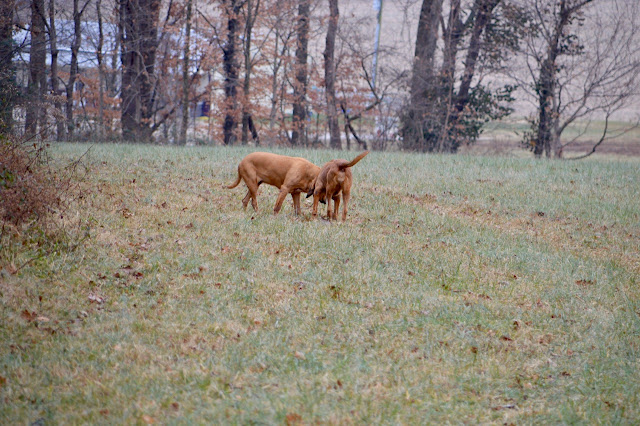 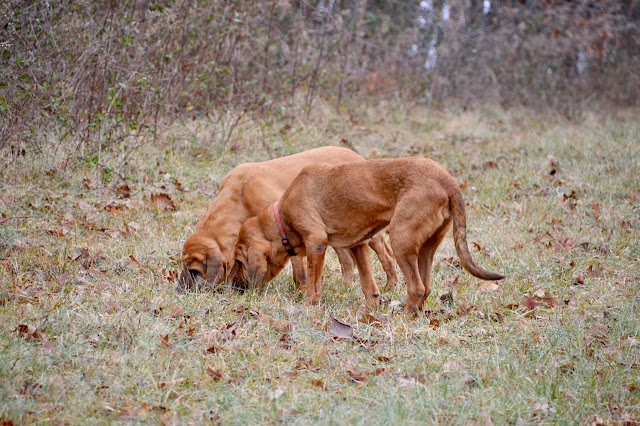 Sadie was sure there must be something else she could find before we ended the walk to go back inside. 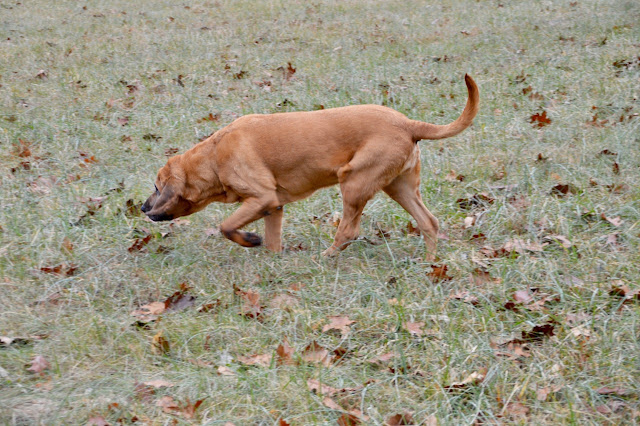 It does not feel like a Friday as if any day feels like the day it is named when retired. They all kind of blend in together when you have every day off and a free schedule for you to decided what you want to do.

With today 'officially' starting Christmas Weekend for those that do work, traffic today is lighter than an early Sunday morning. In fact it's almost nonexistent.

I am going to continue going from room to room, doing a thorough cleaning and putting away anything that might be out of place. I might even rearrange some furniture but not sure of that yet. It might be time to downsize again since I have basically filled up about every available spot for storage.

Birds are chirping outside while I write this ... do they think its Spring already?

I was looking through an old file cabinet this morning. A drawer I had not opened in a very long time. Inside were labeled zip lock bags of all the computer software disc that were for specific computers I had owned in the past. It was funny to see the progression of backup discs.

From the 5-1/2" floppy disk to the "huge" Zip Drives with almost 100Mb of storage space. What really put this all back into time were the 3 different bags labeled --
Almost all of the Zip drives were labeled as they were designed to be used ... as backups. I am hoping somewhere in my 'electronics' drawer I will find a Zip Drive that can read these disc because a few of them are full of old pictures where I have no idea what might be on them. Hopefully I'll find some old puppy pictures of Sadie's first two years ... one's I accidentally deleted when reformatting a hard drive.
I know you only need to keep records of income taxes 7 years but due to my paranoid nature of the IRS, I have copies of all of my income taxes filed back to 1991, filed in sequence. This old file cabinet has a treasure chest full of old information.
Talking about Harry and Arthur to start this blog, had me searching through some picture albums so I could scan some. We were living on the water, on North Whidbey Island just around the corner from the Deception Pass.
I am going to have to stay focused on my cleaning and sorting of rooms with a little downsizing included before I set at the computer and scan hundreds of 4x6 pictures into digital copies. It will be a long slow process but one that I have been wanting to do for quite a while.
I may have misspoke yesterday about Heidi's weight. While giving her a good pet and massage last night It DID feel that she had gained some weight since I was feeling a lot less bone and more 'meat' on her sides and back. She also has hair continuing to grow on her paws ... along with fresh spots where she has licked so much the new hair is gone.
She has practically traded her Mexican blankets for my Marmot sleeping bag this winter but it will be a hard fought battle and this time she might not win.
Well I need to get off here and start the continuous cleaning ... at least get all of this finished before the better college football bowl games start. I have not had much interest in watching the games so far. Too many bowl games to generate money for the host city but also a lot of empty seats.
Can you say the college football bowl schedule has become too saturated?
It's close but not quite lunch time kibble for the hounds -- Stella just walked into the computer room to let me know I have about 30 minutes before she starts howling to be fed.
The hounds are having another great day here in 'the tropics' of southern Indiana.
at December 23, 2016