Stella Does A 180° In Attitude 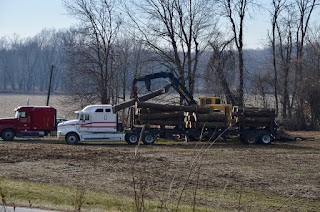 The logging operation finished late this afternoon. What was pretty neat about this, the same machine that was moving and loading the cut trees, was also the same that cut the tree trunks to those lengths right before he loaded them.

After lunch the temps had increased to 23° and it felt nice enough to take the hounds out for a walk. Only this time I was putting Stella on the 25' retractable leash. Maybe that would help her remember how to walk again. She never minds it and will always run toward me when she sees I have the leash, then wait for me to connect it to her collar.

She took off walking as soon as I connected her. She followed Sadie and I on our walk, had 25' to explore and rarely stopped to eat anything. In fact she spent most of the walk leading Sadie and I. Along the walk I kept giving her positive reinforcement whenever she did something correctly.

So with our 2nd walk today, in mid-afternoon, it was a good test for her even thought the walk with the leash was only a couple of hours before. What would Stella do off leash now?

She and Sadie had been out in the back of the field for about 10 minutes while I put on a warmer coat, grabbed the camera and came out to let them know we were going for a walk. Sadie always sprints to me every walk, this afternoon was different. 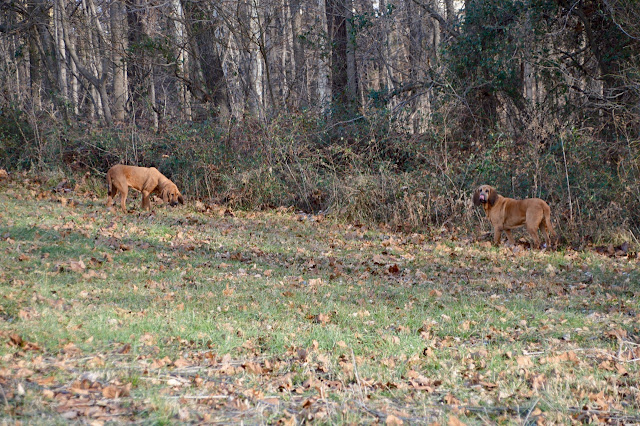 As I started up the path, Stella came running toward me like Sadie does on every walk, so it was a surprise to see her do that. She must of thought I had the leash with me. I can't remember the last time she ran toward me to start the walk when I didn't have the leash with me. 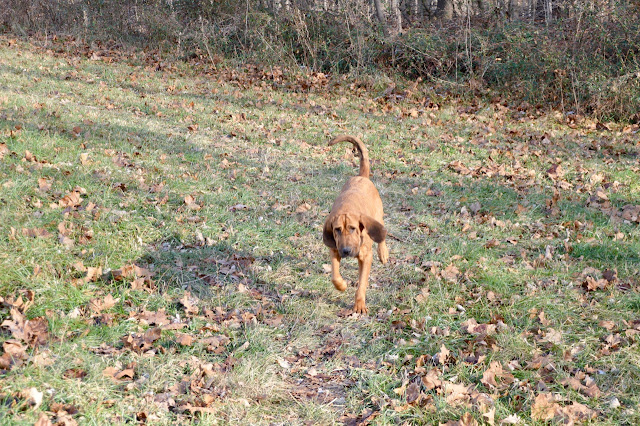 She must have been happy that she was not going to get connected to the leash because she turned almost immediately with Sadie and took off ... it was the first time unleashed that she did not hang back like she has for weeks, if not a month or more. 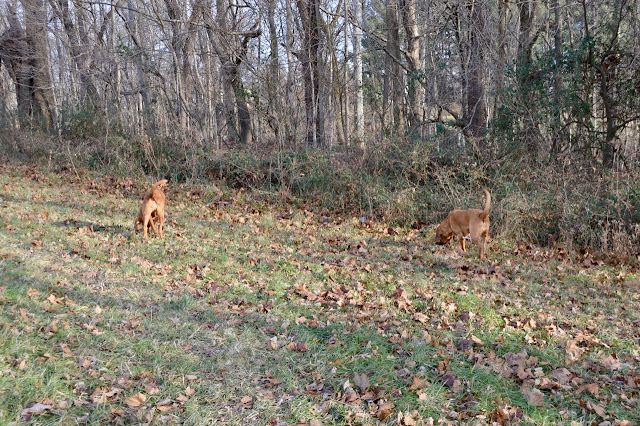 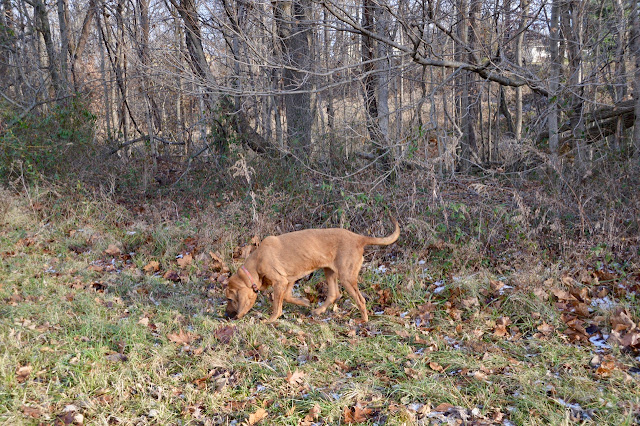 It was good to see her follow Sadie along the path. 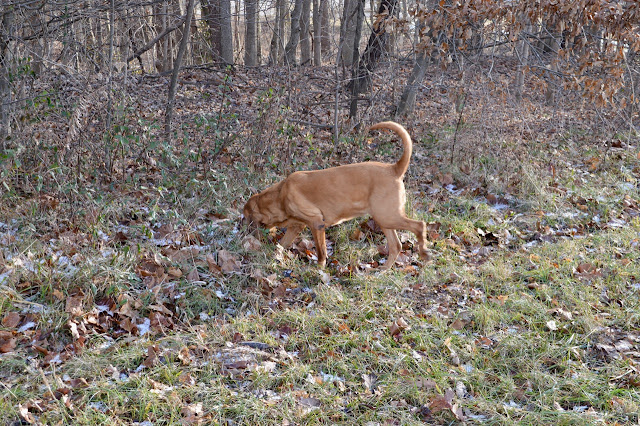 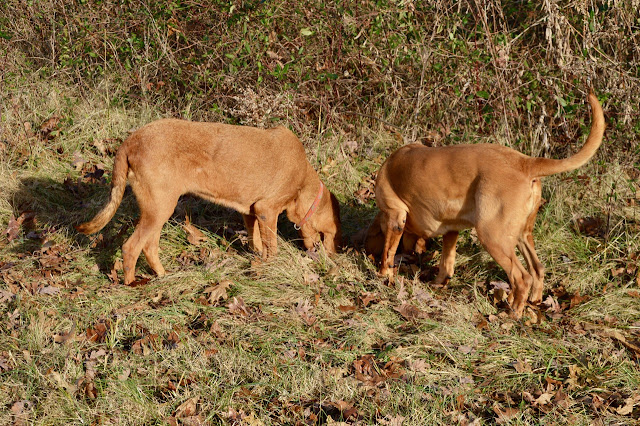 I can't describe how much warmer it felt during this walk at 36° compared to yesterday in the teens. It almost felt like a day in March, not December. A 20° jump in temperatures will do that. We are suppose to reach the lower 50's later this week. 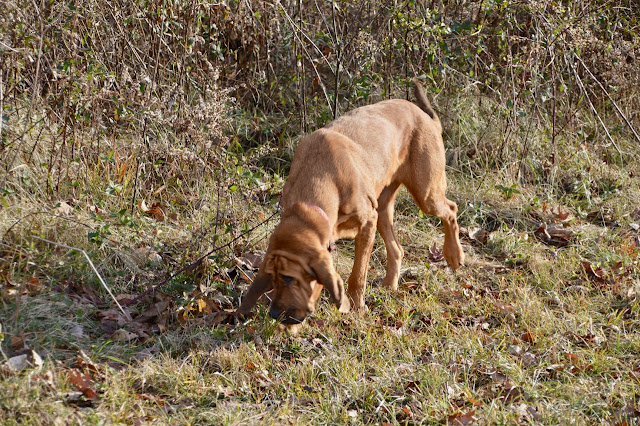 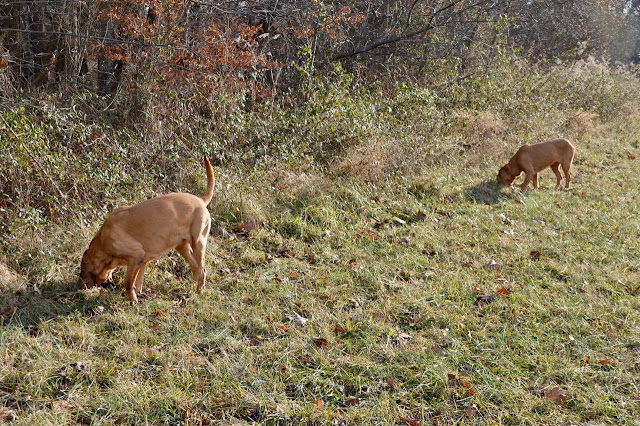 As we made the first turn, Stella was walking just the way I wanted ... wander nearby but keep up the pace that Sadie and I take. It does give them time to check out areas and I'll stop during times like that ... as long as they are moving. 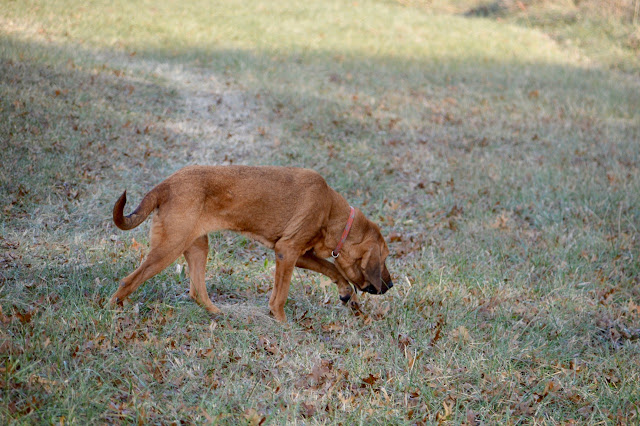 She still kept the lead whenever Sadie caught up. 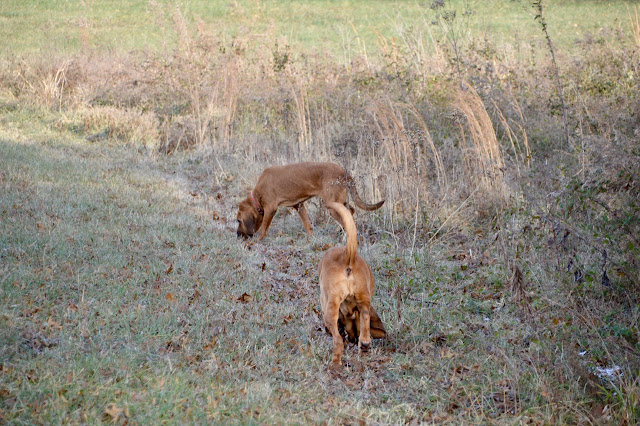 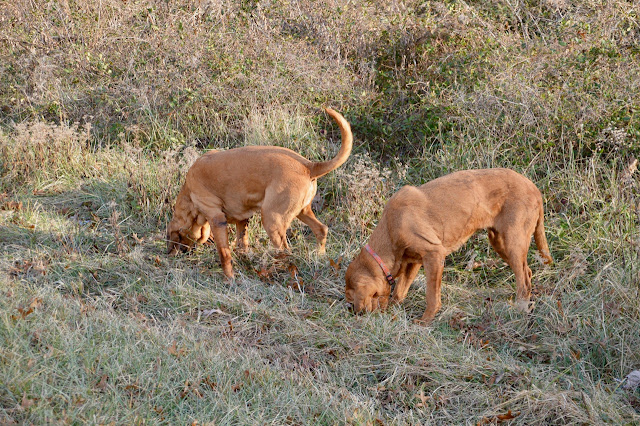 I was curious if they were going to head right to the corner but they followed the direction of the path I take and headed for the back of the field. 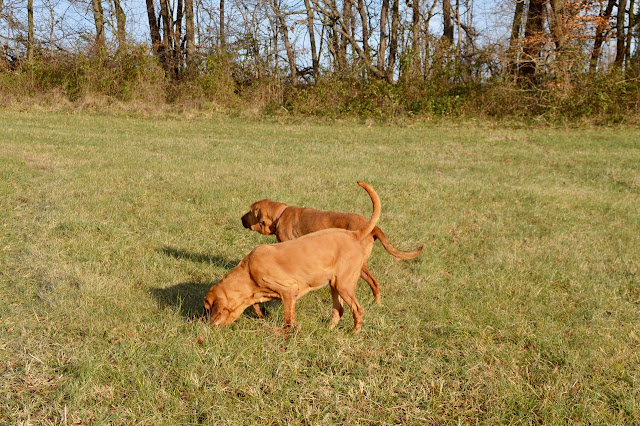 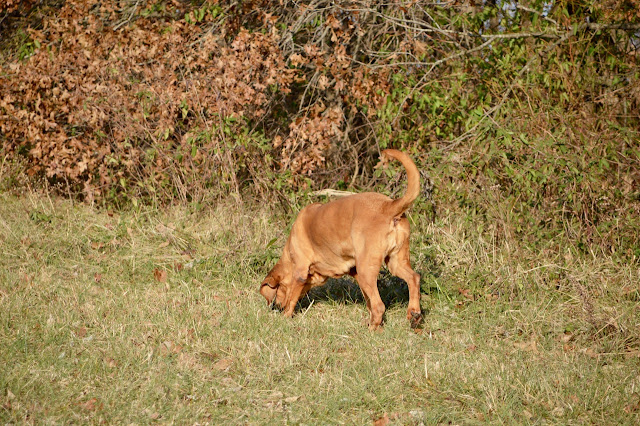 Once again she wandered off a little to the left but also turned and trotted toward Sadie as we approached the final turn toward home. It was just like she had done most of her walks prior to a month or so ago. 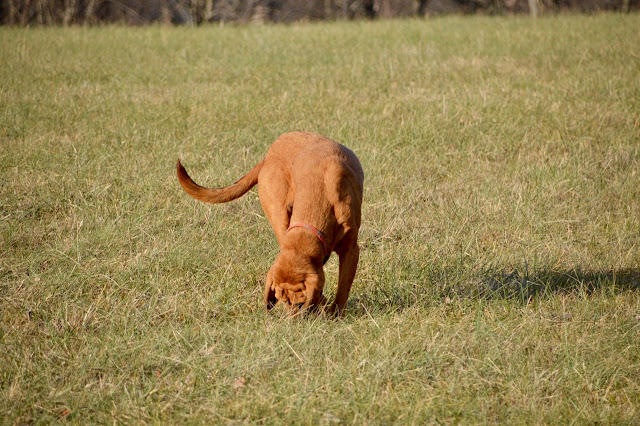 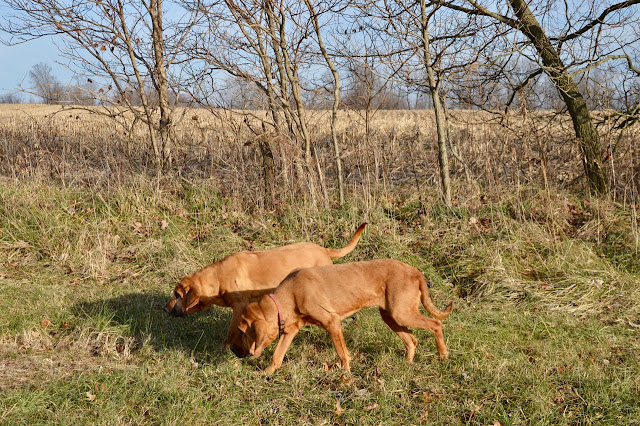 As all of us made the turn for the final leg of the walk ... Stella trotted around both Sadie and I ... taking the lead again. 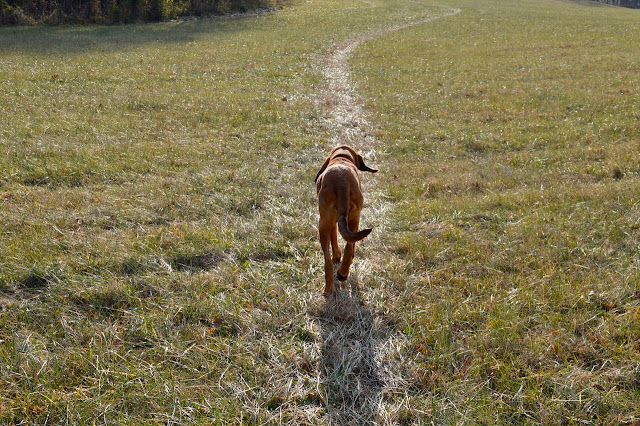 They both trotted away from me, all the way up to that first corner ... nothing needed to be said to get them to follow me home. I was shocked in the difference in Stella's attitude. 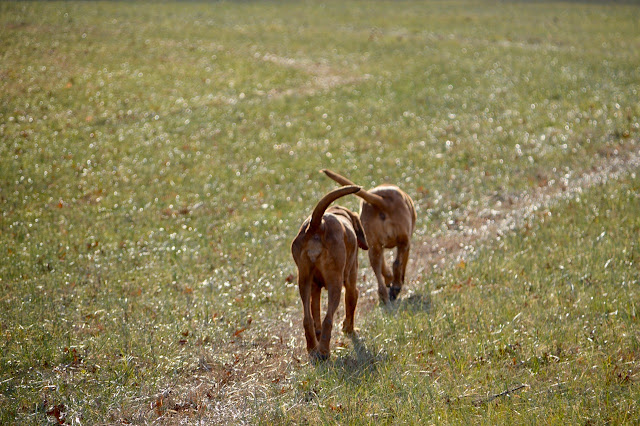 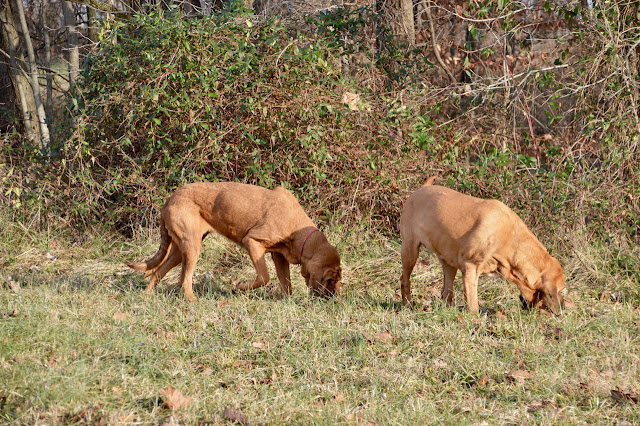 As we approached the backyard, they both continued to walk toward home. I really couldn't believe in the change they both had on this walk. It may have been a month or longer since Stella has walked off leash the whole walk instead of hanging way back and then meeting us at the first corner to turn around and come home. 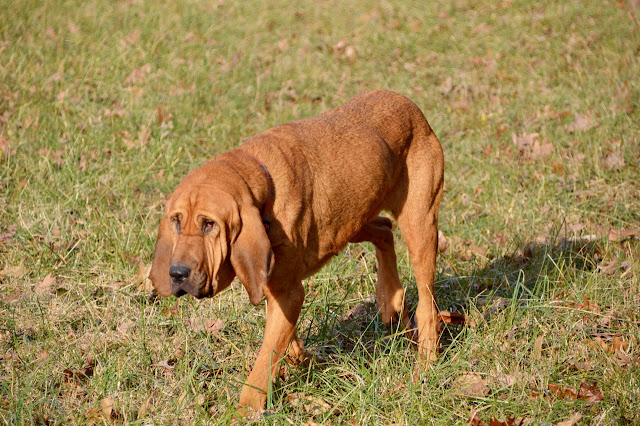 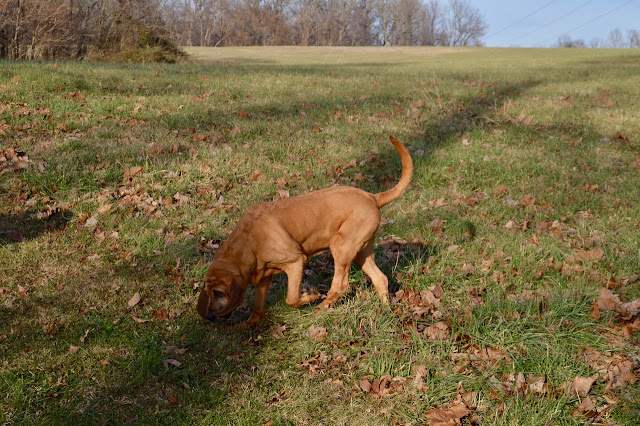 Does that picture look like a day in December?? Of coarse I remember last Christmas Day in 2015 it was in the 50's if I remember that correctly. Although at the start of the walk 36° didn't feel too bad, by the end of the walk it was freezing. 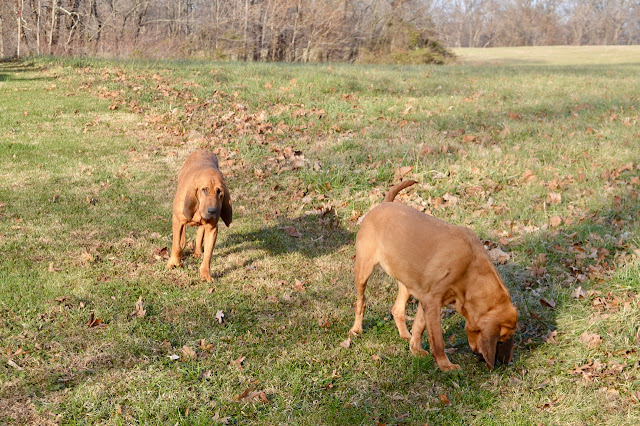 The hounds were not the only surprise of the day. My brain was. The light bulb in my mind flicked on as I stepped inside the door and out of nowhere I knew exactly what I had to do to my old door so the new door knob would fit. That doesn't sound too out of the ordinary but I bought this new door knob over 3 years ago.

I didn't have a drill with that diameter and I realize that would have made it much easier and faster. The one I did have was too small, was one that I had used for the shower faucet years ago. Anyway I made the hole large enough to fit the mechanism of the new door handle, with what I had.

What got me thinking about fixing it, was the other night I could barely slide my key into the slot to unlock the door and at the same time this morning I could barely turn the lock from the inside to lock the door. Too old, too flimsy and too much movement while even jiggling the key would not work. The locking mechanism was just too old.

My decision to trade the FJ for the Mini Countryman must have been a good one ... not a sliver of 'buyers remorse' has floated through my brain cells.

The temps are suppose to continue to climb here in 'the tropics' of southern Indiana and that's always a good thing.
at December 20, 2016