It was one of those days that no matter how many layers of shirts you put on, I never felt warm. Most of the online weather apps were telling me it was 42° outside and it felt more like -42°, not plus. I still think during these times, my sleeping bag is the warmest place in the house but I fought off the urge to climb inside, which would lead to a siesta just to stay warm. 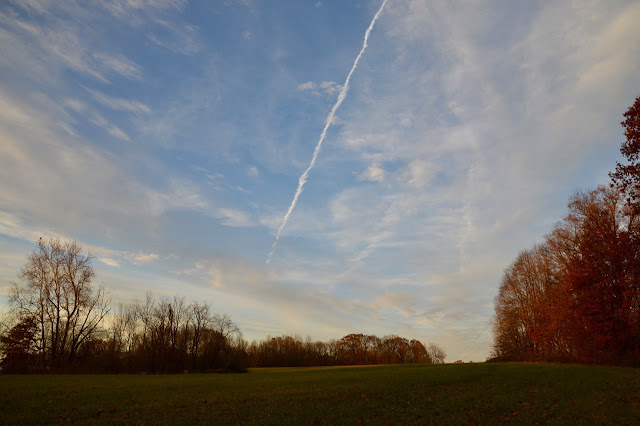 Besides, Heidi had changed her strategy after lunch and had moved her sleeping spot from the couch back to the bed. Not only on the bed, but she had nosed her way completely inside my sleeping bag and was in the snoring state of sleep.

By 5pm I had read enough books, ate enough food, played enough Mahjong that we decided to head out for an afternoon walk. I also wanted to do my annual test of how well my baseboard electric heat works. See, it's December 5th and I have yet to turn on the heat this year. The house has been staying below 60° during these cold days outside and nights that fall into the 20's. 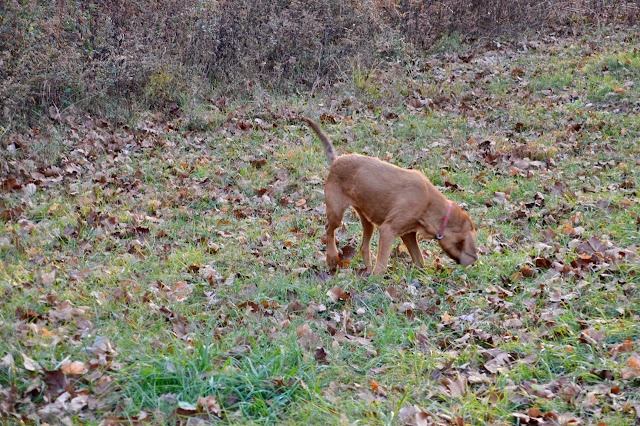 So I set the timer on the iPhone for an hour, cranked each control to turn on the heat in the kitchen, computer room and living room. I also took a reading of my house meter ... then set out for an afternoon walk. 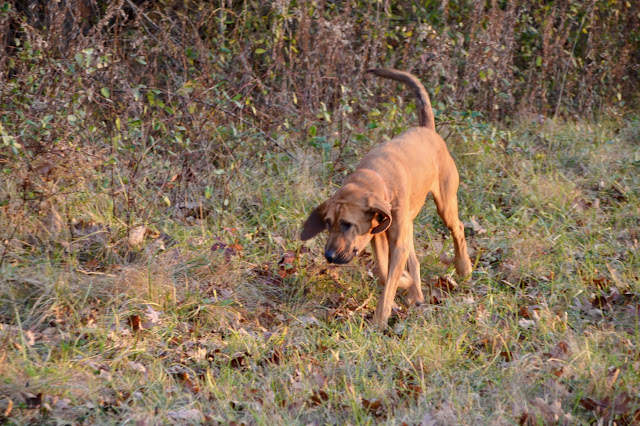 With no winds it makes it bearable but I am already counting the days down to spring, back to at least some 70° temps. I am not a fan of winter weather. 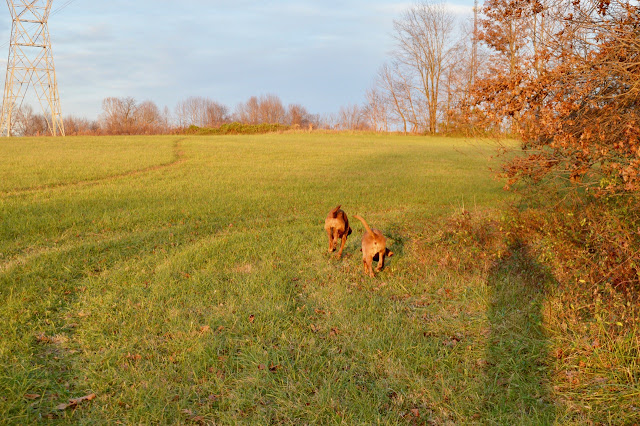 Stella stayed up with Sadie and I most of the walk. I guess it was that lecture I gave before we started that I wasn't going to be calling you to "come on" and I wasn't going to chase you to follow me home. I am beginning to hate those two words "come one" after having to repeat them more than I ever wanted to. 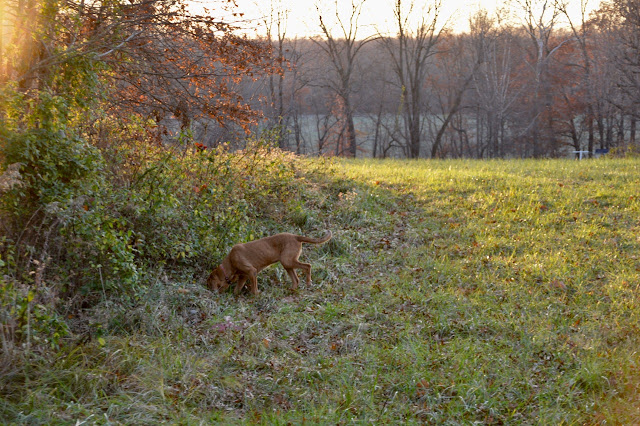 Just as I turned back around after taking that picture above me, Stella sprinted past me as fast as she could to catch up with Sadie who had rounded the corner to their favorite spot. 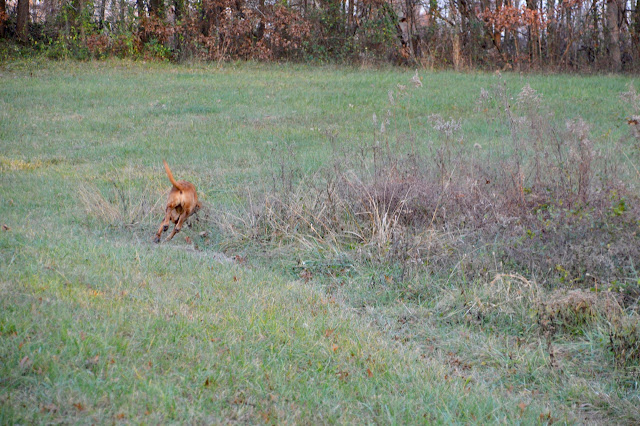 I turned myself if that direction hoping to lead them in the right direction without too many commands and too much cussing. Luckily they followed me out of that area and headed out along the back of the field. 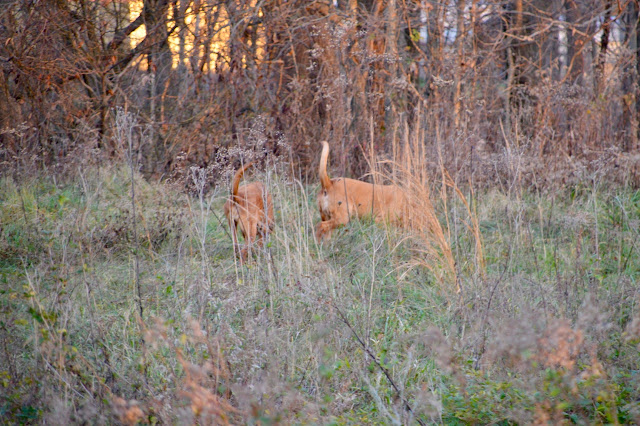 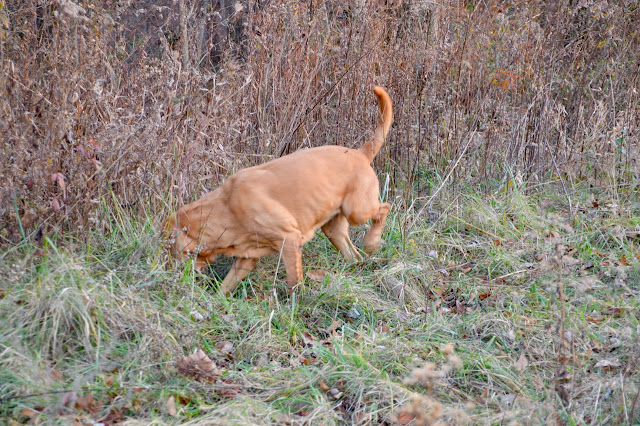 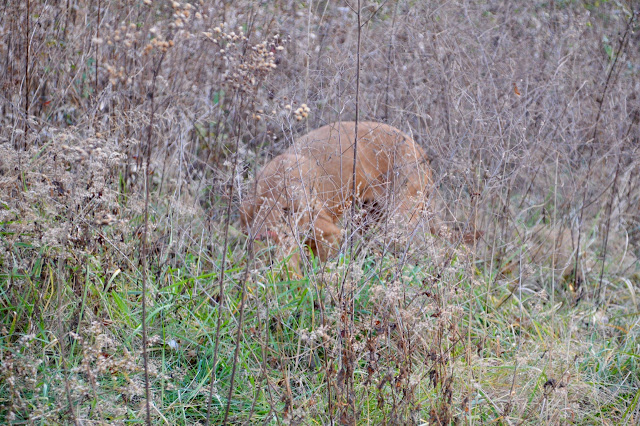 There is always areas to explore for them, no matter what part of the field we are in. It is some cheap entertainment for them and better than any dog park that I can think of. I've made them loners just like me. 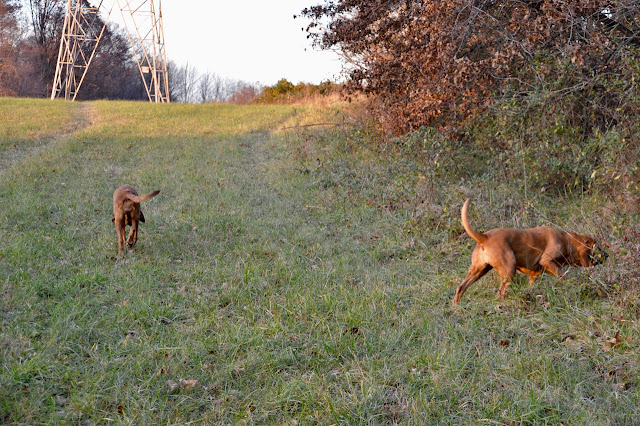 As I made the turn to go home, they both trotted around me and down the path. Maybe my lecture worked as they were more than the perfect bloodhound on the walk this evening. 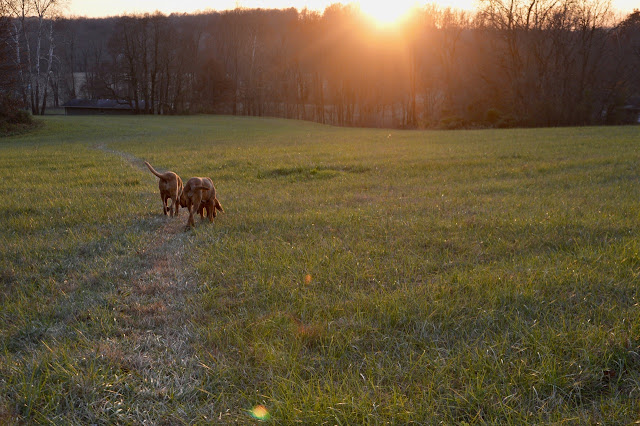 They still needed to check out a couple of spots on the way home which is normal. I could feel it was getting colder as the sun went down. The hounds must have felt the same way since they didn't hesitate in following me home. 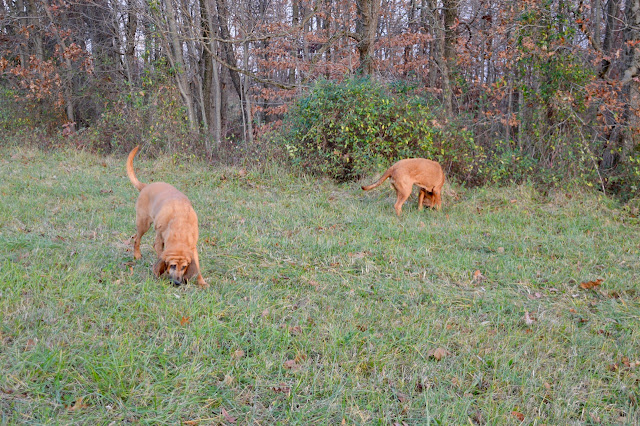 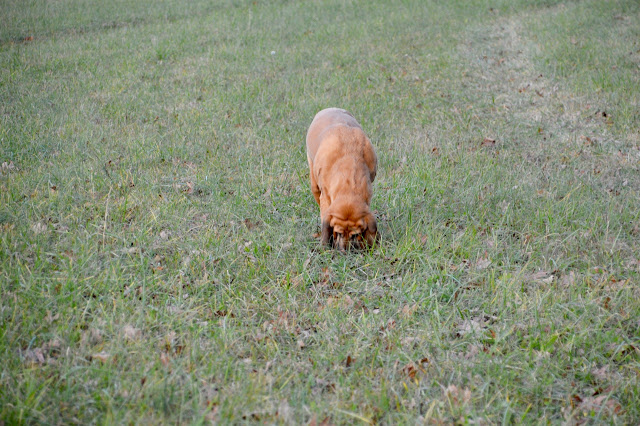 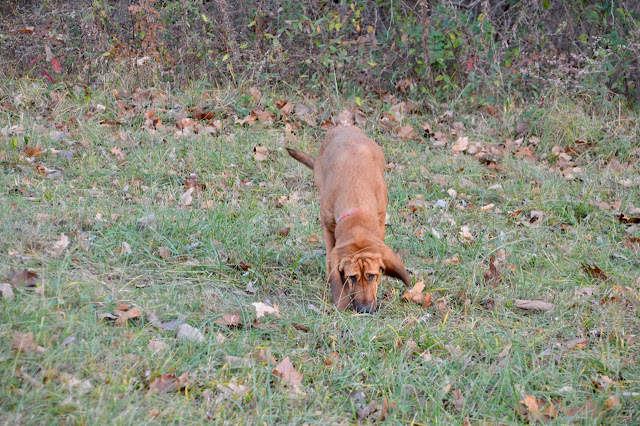 As I turned for a possible last picture, I had only Sadie behind me and didn't see Stella anywhere. For some reason she decided to take what I call her June Route home, checking out the north part of the yard. 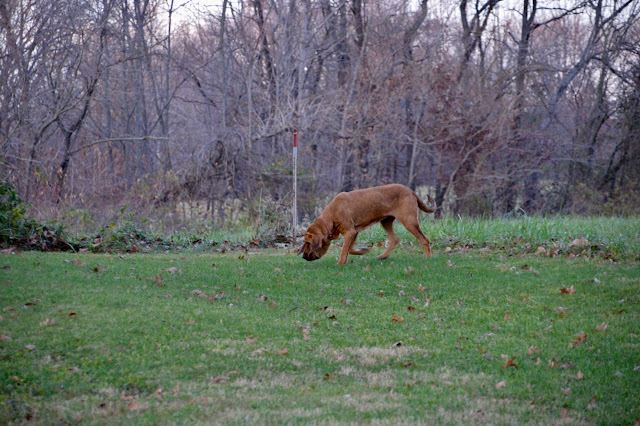 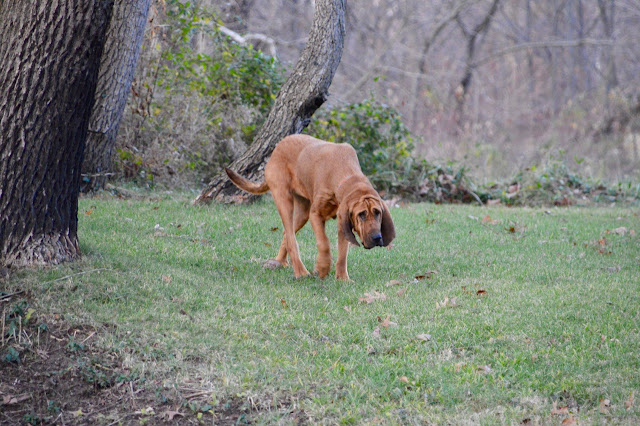 I have some new plans for that dirt area that I cleared a few months ago. Instead of just planting grass I have a plan that will add some color other than green, prevent some erosion and still keep the wild bushes from grown. You'll find out what it is next spring as I do it. 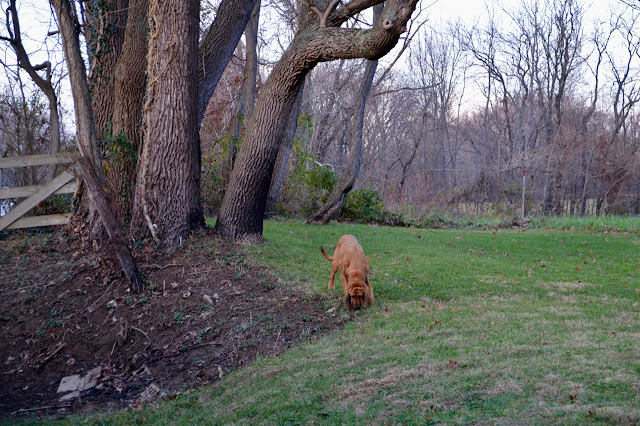 I mentioned a few weeks ago or a month ago about making some changes to my diet. I've lost weight, fat and part of my appetite on the vegan diet I started September 7th. I am finding some consistent issues with indigestion that I did not have when I cut out all grains for the year before September 7.

On the vegan diet, beans are a major source of protein and most of the different kinds of beans I have eaten give me more indigestion. Oatmeal gives me indigestion. When I tried the Paleo Diet which emphasizes low carbs, no grains, meat, chicken or fish, with fat and protein ... I never had indigestion.

Plus after a meal of meat and steamed veggies I felt full and rarely craved food between meals. On the Vegan diet with steamed veggies and brown rice I always feel hungry soon after eating. It was interesting to see that the book I mentioned a few weeks ago, The Blood Type Diet suggested a diet for my blood type being closer to a paleo diet with dairy, meat, fish and chicken as the main sources of protein.

I'll not go into a lot of the book but it did say with my blood type I was more apt to get stomach ulcers than heart disease. There is something in my intestines that worked well with red meat and certain kinds of fish but not grains, or legumes.

I think I will be moving away from the diet that gives me indigestion and makes me feel hungry all the time toward a Paleo type diet with some personal adjustments I had before.

Basically I have come to the conclusion after trying different foods the past few years .... moderation .... is key but what is more important than what food you eat, is eliminating sugar, processed foods, soda's and alcohol. So that is what I will revert back to.

Back to my electric test. I just completed the hour curiosity test. I used 6 kilowatts in 60 minutes. My computer room went from 59° to 71° and my living room went from 56° to 66°. Both of those rooms are way too warm for me, past my comfort zone ... using the 41 year old baseboard electric heat system.

The hounds seem to like the heated house ... 2 of 3 of them are snoring. I don't think I have heard Stella ever snore but she does wag her tail while sleeping.

It does not feel like it should be December here in 'the tropics' of southern Indiana.
at December 05, 2016