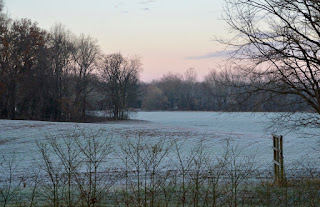 It's good that the hounds are flexible since they live with someone that has a few crazy tendencies and being retired isn't the cause. Let's just say today it was great that they are flexible, but nothing too serious that would harm their routine.

A few months ago I couldn't get to sleep and would spend most nights staying up until 2 or 3 am and would still have to force myself to go to bed. I'm a 'night person' by nature, always have been. About two weeks ago all of that changed. 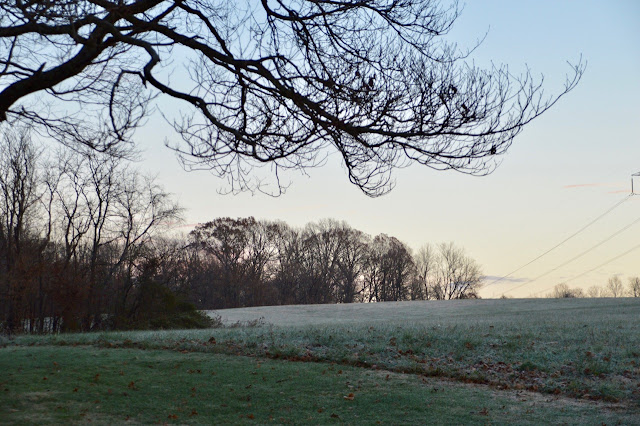 I started going to bed before midnight, then gradually that kept moving earlier to 10:30pm. It was pretty consistent until last night as I was reading while sitting on the couch, then laying in one half of the couch while Stella took up the other half.

I headed for bed and it was only 9:07pm. I don't recall being awake longer than a couple of minutes. Of coarse going to bed that early only meant I would most likely be getting up early ... but I didn't think it would be that early. I was wide awake by 2am, and tried to get back to sleep until 4am ... when I gave up.

I flicked on the lights, woke up all the hounds. They were a little confused but by the time the kitchen light was turned on and coffee was being made they had figured out it was time for breakfast ... even if it was pitch black outside.

Stella howls just as loud inside the house at 4am as she does at 7:30am. She knows the kibble has been poured out and all I have to do is sit the bowls on the floor in each of their spaces. Sadie and Stella finished their bowl in less than a minute, Heidi takes her time and finishes a couple of minutes later. Sadie was the only one that wanted to go outside. She was trained at 12 weeks old of going outside after every meal ... she continues that 8+ years later. Stella and Heidi had other plans though. They could tell it was dark and that meant it was still not too late to get some sleep in before daybreak, so they both trotted for the bedroom full of Mexican blankets and sleeping bags. Sadie eventually joined them after she figured out things were not normal this morning.

I can say it's warmer outside at 4am than it is a t 6:30am. I like that time of day outside between 2am-4am. My inside thermometer may have said it was 60° but it felt much colder as we approached daybreak.

By 8am we headed out for an early walk with the weather apps telling me it was 27°. I pulled the Mountain Hardwear down coat out of the closet, traded the lighter gloves for my ski gloves and threw on a wook ski cap even though the down jacket comes with a hood. 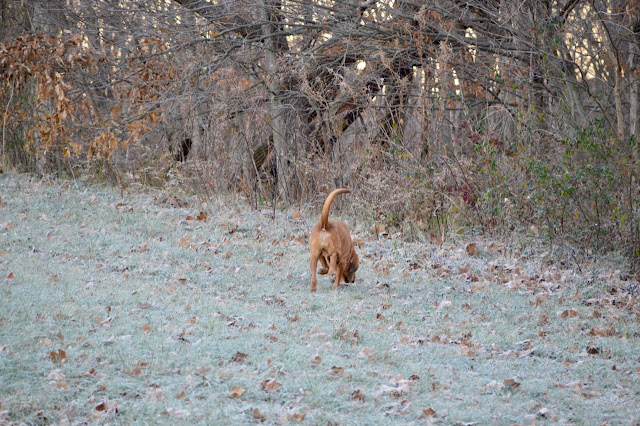 It was within seconds that I could feel winter had arrived. It felt much colder and I am thinking this year I might have to buy a pair of lined jeans, new ski pants or some Carharts. Each year it feels colder than the last when we take these walks. I could see fresh deer hoof prints in the frosted grass ... none of the four pictures I took of them were any good, too blurry. But the hounds knew they were there and acted like it was all new stuff to them. 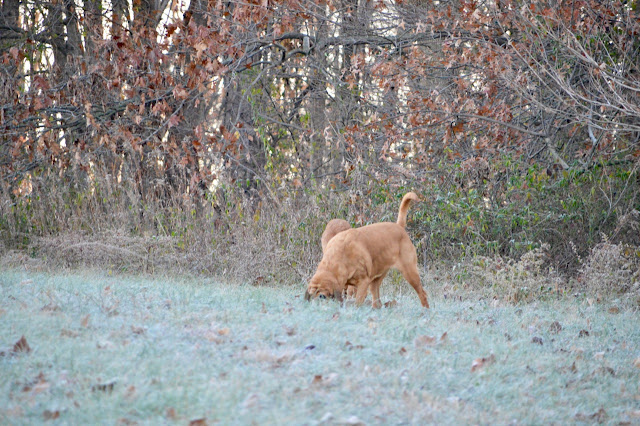 I wasn't sure what there pace would be today but I knew what mine was going to be ... non-stop. 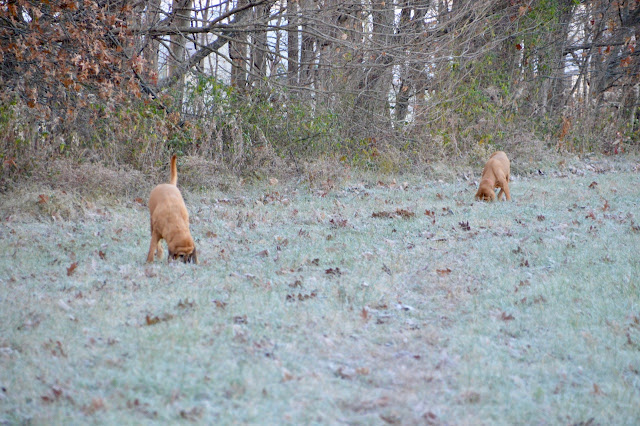 Sadie as usual will not be left behind. 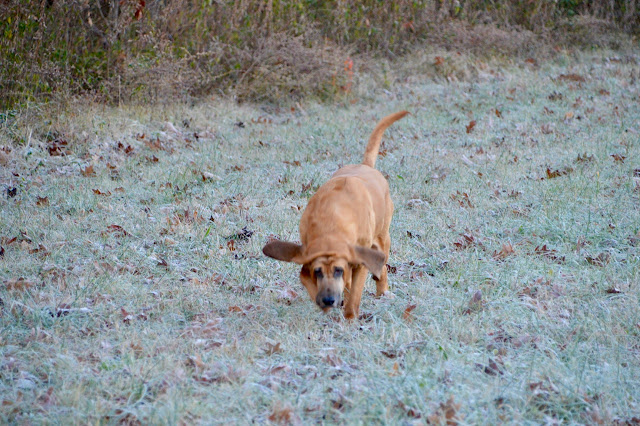 As you can see, Stella is different ... no amount of calling her will make her move, until she wants to move. Sadie and continued around the first turn. 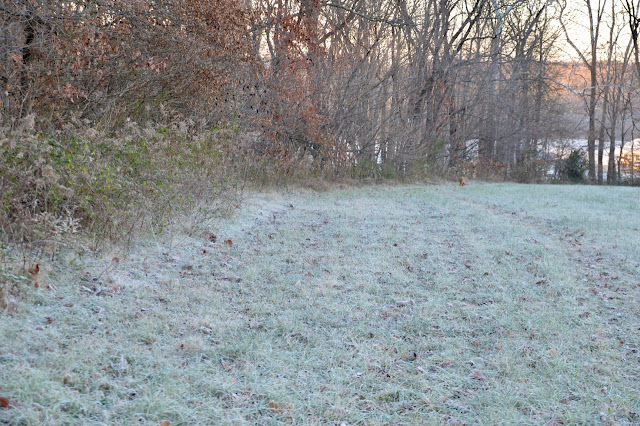 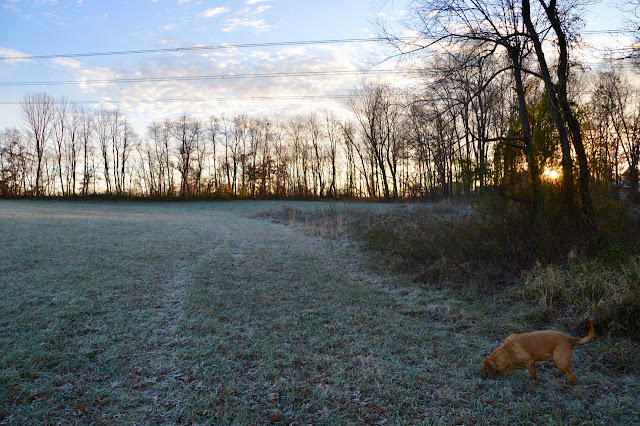 You could hear the frozen grass crunching while Sadie ran. 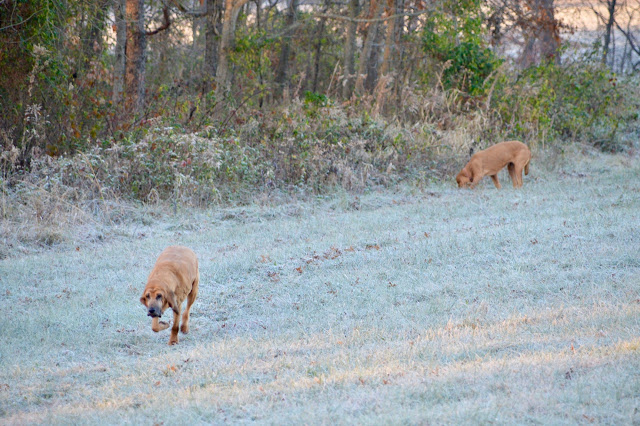 She found it first and Stella joined her soon after. 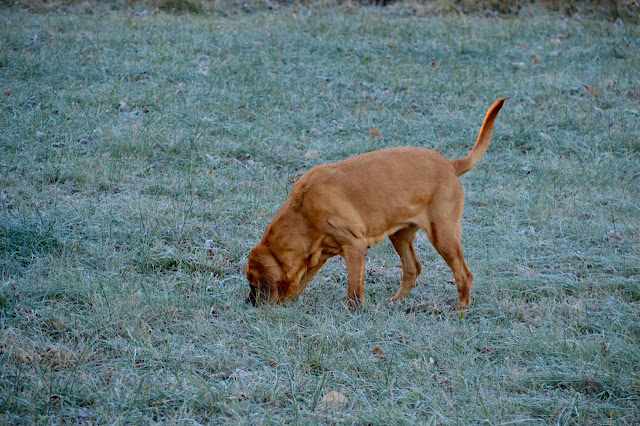 Stella letting me know they are going to be there for a while, don't bother waiting. 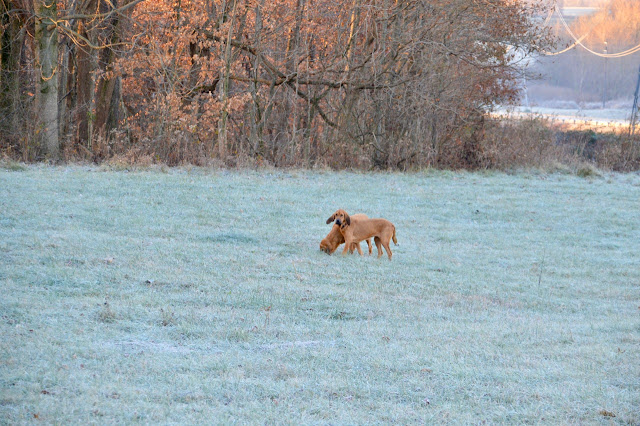 Those are only three of the six large barnes to raise turkeys. I was told over 40,000 but I can't remember if that is per year, per month or per quarter. 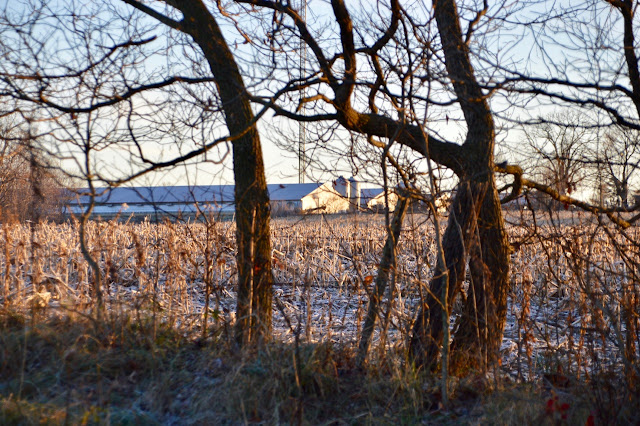 Sadie gives Stella a look but decided it was cold enough to sprint to me and then head home. She has seen enough. 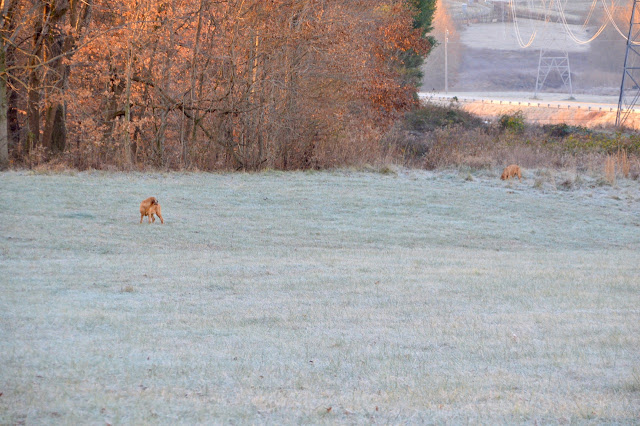 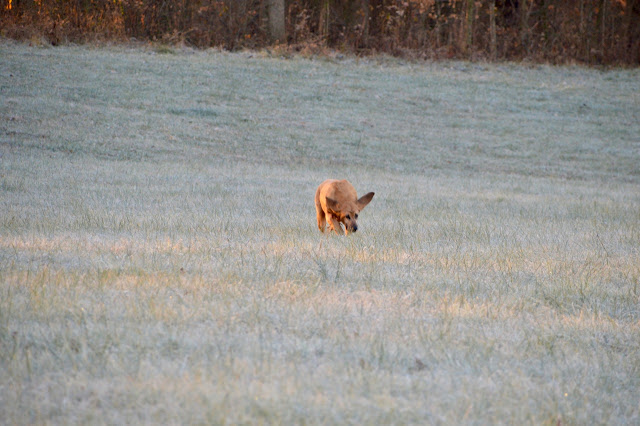 Sorry for the blurriness of the pictures. I am not sure it was the thick ski gloves that was moving the camera or the glove fingers slightly moving it when I took the picture. 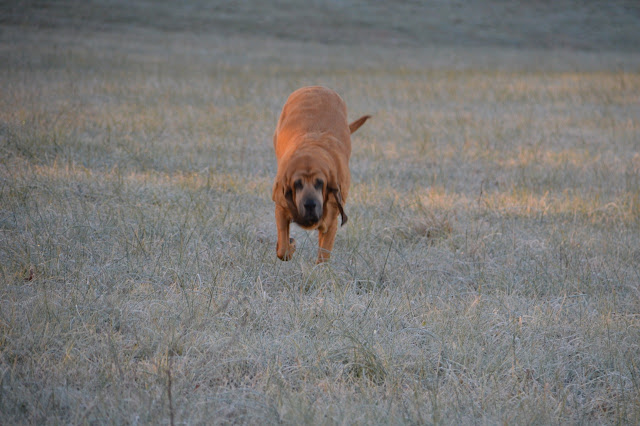 Stella is more interested staying there rather than getting out of the cold ... or so I thought. 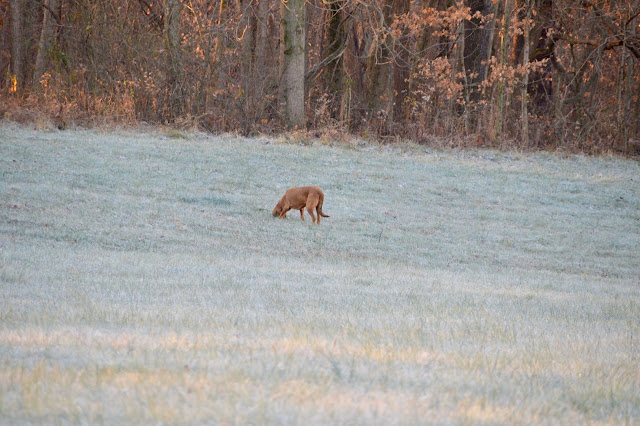 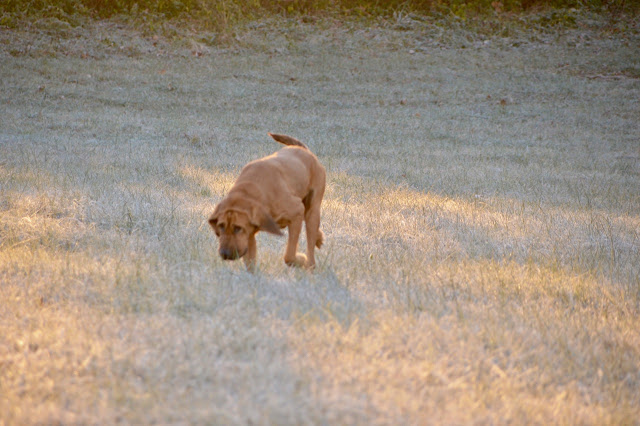 About the time she got to Sadie and I, they both took off, not waiting to see if I was following them or not. 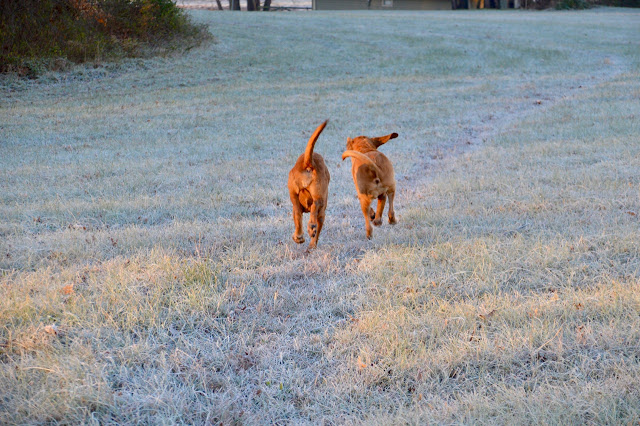 Still maintaining the distance in front of me. The zoom lens make them look closer to me than they were. 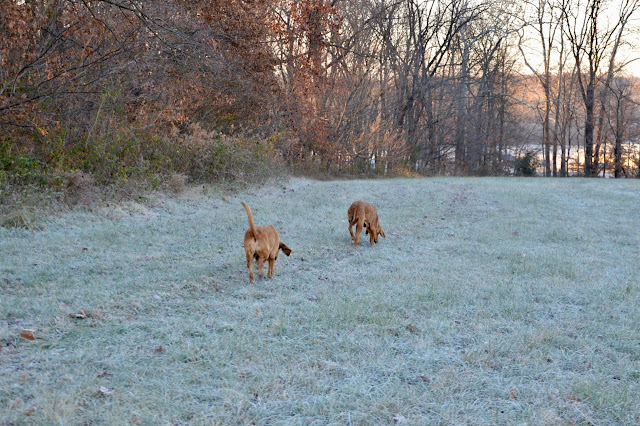 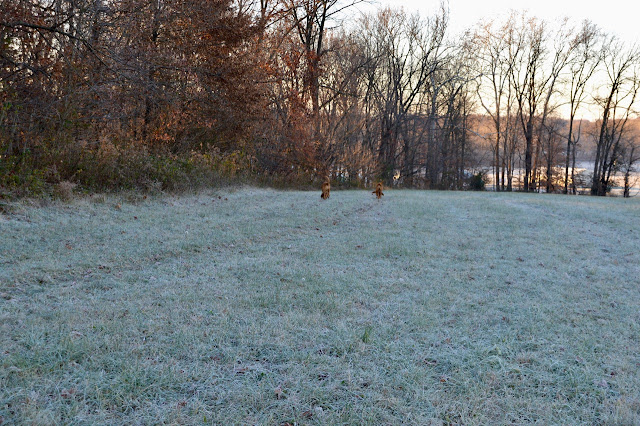 It must have been cold because Stella did not hesitate getting home. I barely caught her in this picture since she was trotting for the house, with Sadie already at the door to be let back inside. 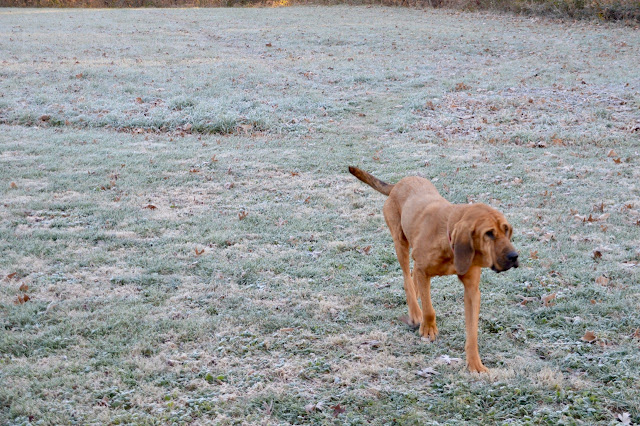 Heidi in the meantime had a "Do Not Disturb" sign on her blankets. She was sleeping when we left and snoring when we got back. She will come back to life around lunch time or if she hears me fixing my lunch.

I had so much time on my hands this morning you may notice I added some old and some new blogs to the sidebar. Since I like most things equal, I also edited my 'label' section on the right sidebar and doubled the number of labels to make it pretty close to even with the left sidebar.

For the first time, I added a gadget that counts the number of visitors and installed that at the bottom of the blog. By the time I finished the daily ration of 2 cups of coffee near 6am I wondered if an afternoon siesta might be in store later this afternoon. You can do that as often as you like when you are retired ... I am still telling myself after 32 months, retiring was the best decision I ever made.

I may break the 2 cup limit and fix at least one more cup of coffee to have while I read. Even with the heat turned on, it just didn't feel warm enough so I pulled out one of my space heaters designed like the old steam registers. It wasn't long before Stella as sitting right beside it as close as possible getting her ears warm.

Only Heidi has ridden in the 'new' FJ. I still enjoy how clean it is so the bloodhounds have not been in back, nor have I folded the back seats down yet. It's nice to have a clean vehicle I guess but today may be the day they get their first ride. I need to get out of the house and they would just sleep in the back anyway.

I saw my old FJ on the Toyota dealership site for sale. Obviously everything is fixed and I do admit I felt a little buyers remorse when I saw it. I kind of miss the radial look of the Voodoo Blue set up compared to the stock look with running boards. Yet, once I feel how smooth this one rides and I glance to see I have almost 30,000 fewer miles ... I feel better about the transaction.

I guess as usual the hounds will dictate how much we do today ... but it's cold, really cold so that means a lot of book reading.

The tundra has arrived here in 'the tropics' of southern Indiana.
at December 07, 2016