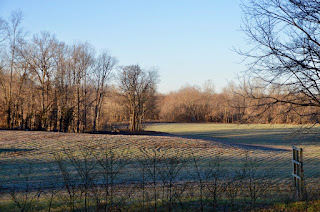 Every since I retired in April 2014 I find it normal that I lose track of days. With our fast paced lifestyle her in 'the tropics' it's really not a big deal when that happens.

Whether it is Wednesday or a Saturday the hounds have the same routine, even on declared holidays.

So as we were out this morning, me with a cup of coffee in hand while Sadie and Stella walked around the field, I realized I had no idea what day of the week it was. Luckily the print out I have for the college football bowl games on tv reminds me not only who is scheduled to play that day or night ... but shows me the day of the week. How convenient is that?

Even with my cup of coffee in my hand and no camera, Sadie still gave me that stare she has when she wants to walk. 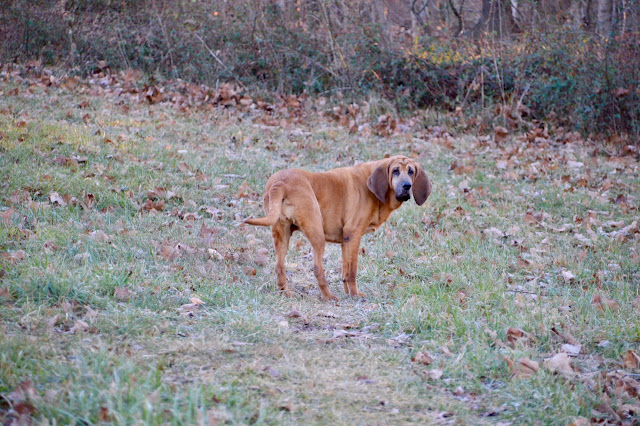 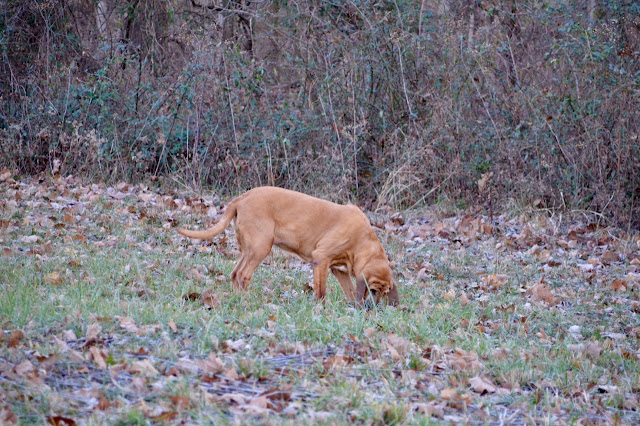 It wasn't long though ... just one more cup of coffee ... then we headed out to enjoy a beautiful sunny morning, no wind and a crisp feeling to the air. 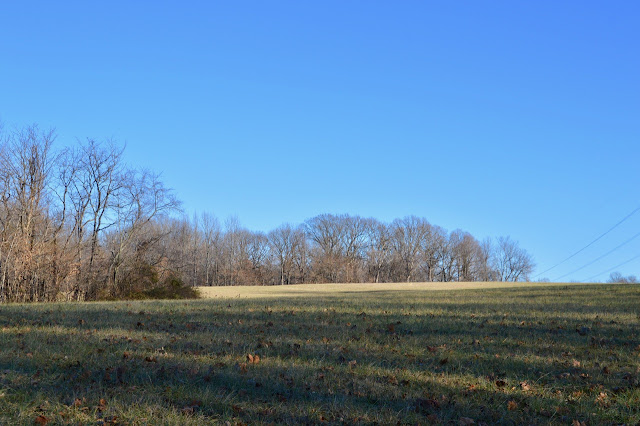 The hounds were more than happy to get started ... meanwhile back inside the house, Heidi was in full winter mode and had not come up for air while sleeping under a sleeping back, every since she had finished her breakfast kibble. That routine in the winter cold temps is nothing new for her ... she has done this every winter since I brought her home in 2011. 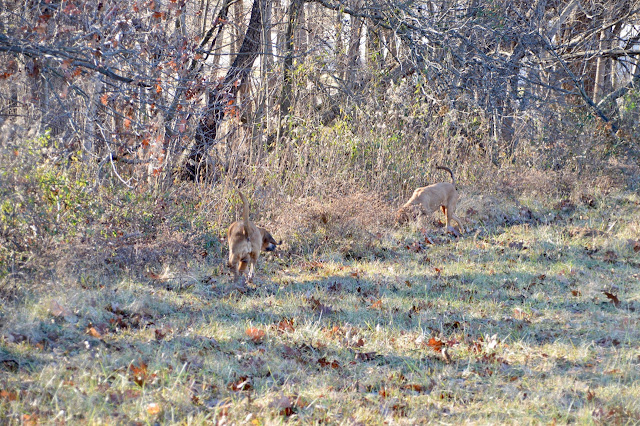 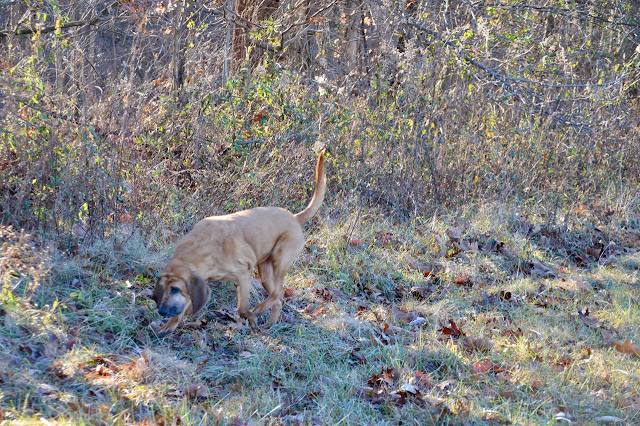 The hounds were on their own as I walked. I could tell early in this walk that Stella had different things to check out and most likely would not be walking with Sadie and I. She was good though, getting back to us without being called. 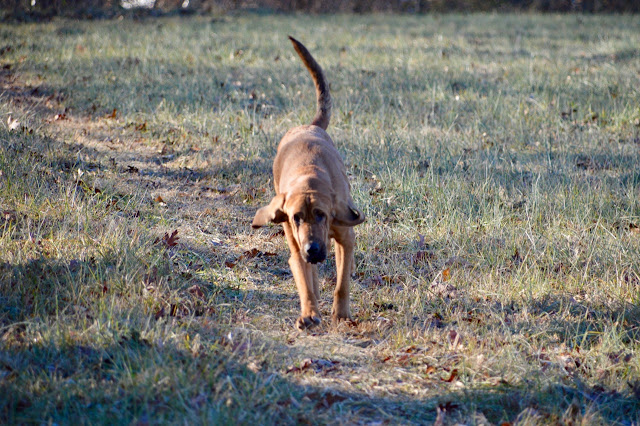 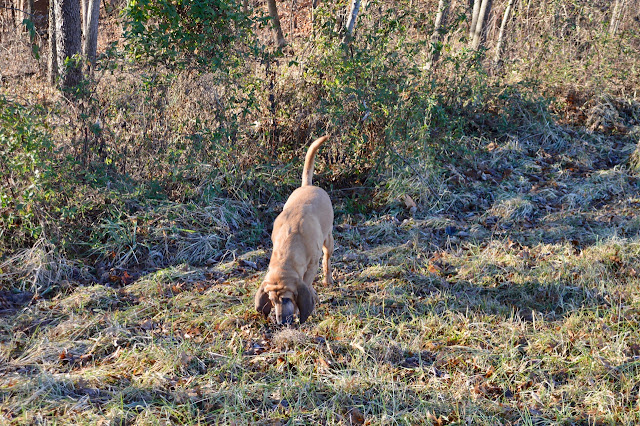 When I zoomed in for this picture I knew Stella had no intentions of following our pace. 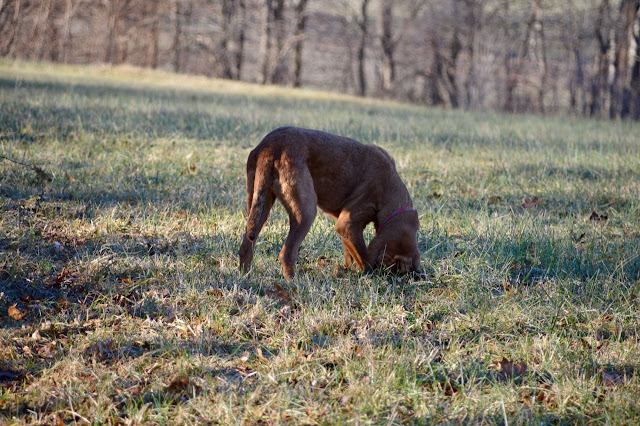 That never bothers Sadie as she sprinted past me on the path and headed for the back of the field. Even at 34°, it felt warmer than the pictures show. 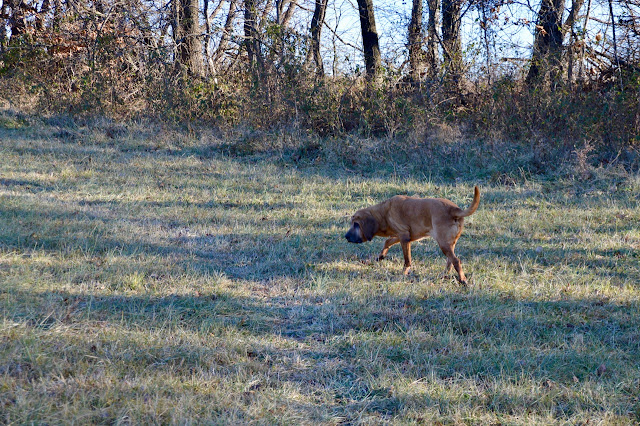 Has Stella even moved since we left that spot? Even lifted her head from the ground? 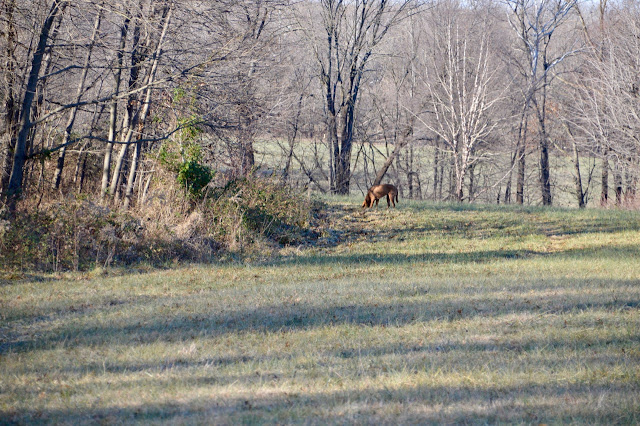 Then out of nowhere, she decided she had better catch up with us. 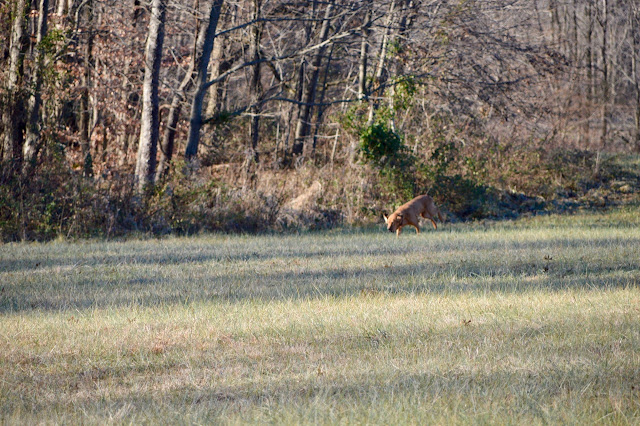 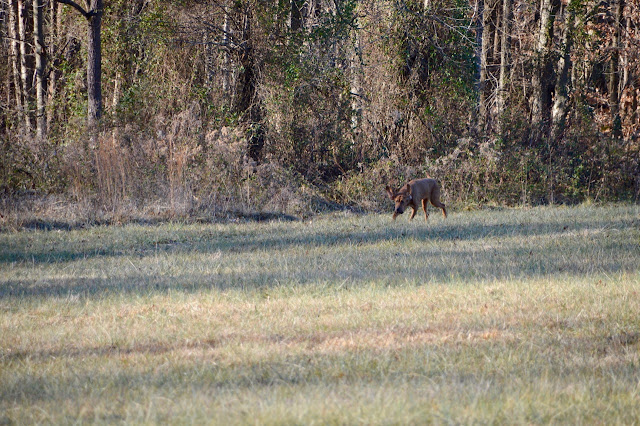 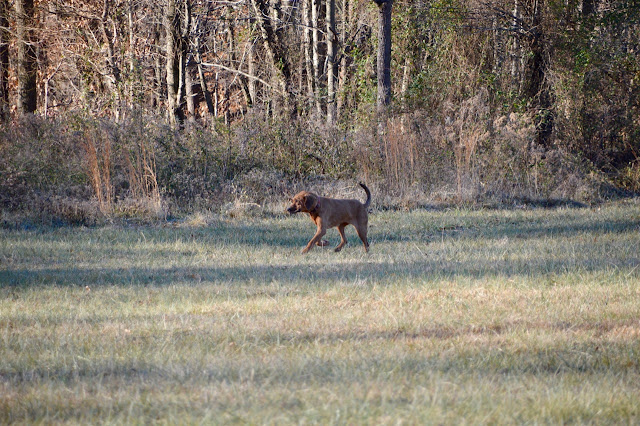 Just as she glanced to her right up to the far corner of the field, while Sadie and I were heading home ... she made a quick left turn only to be interrupted by something her nose found. 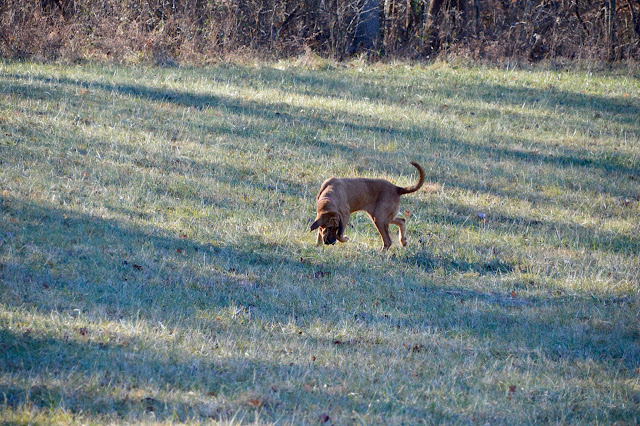 Not to be fooled into who was really in control of this walk ... she took off trotting to a corner that is about as far away as she could get. Sadie and I continued our path home ... I was really curious what Stella would end up doing. I wondered if it was going to be one of those days where Stella lags so far behind that she is out of sight as I would make my last turn home. 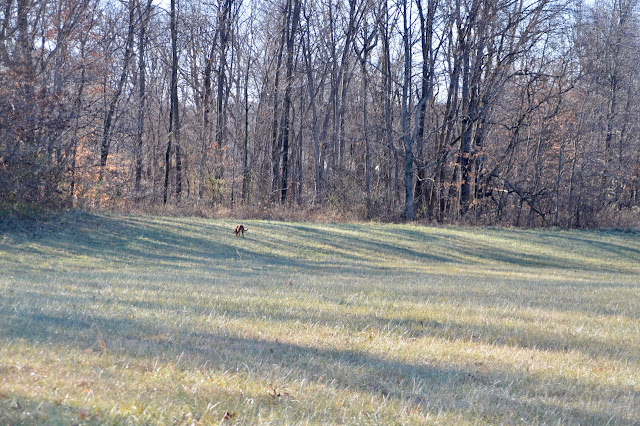 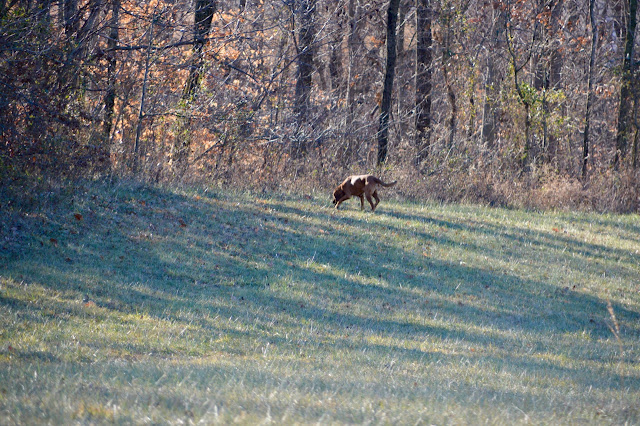 But just like before she started trotting our way. With her nose to the ground she followed our steps along the edge of the field and evidently smelled Sadie and changed direction to come right at us. 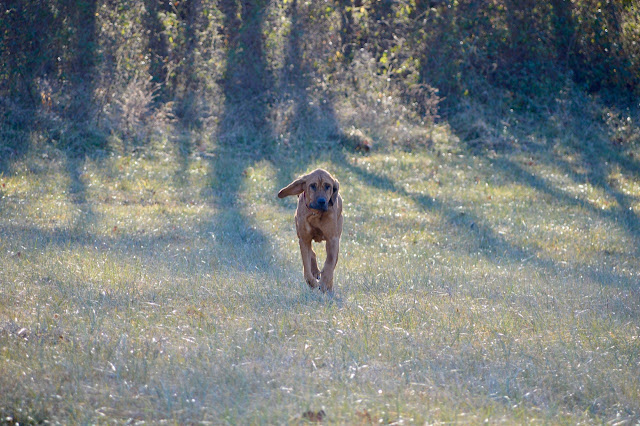 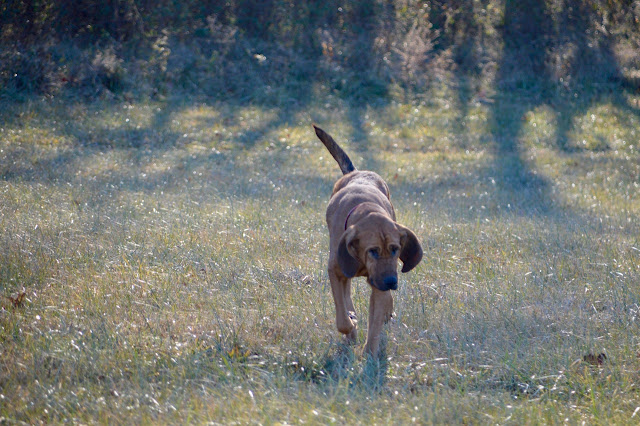 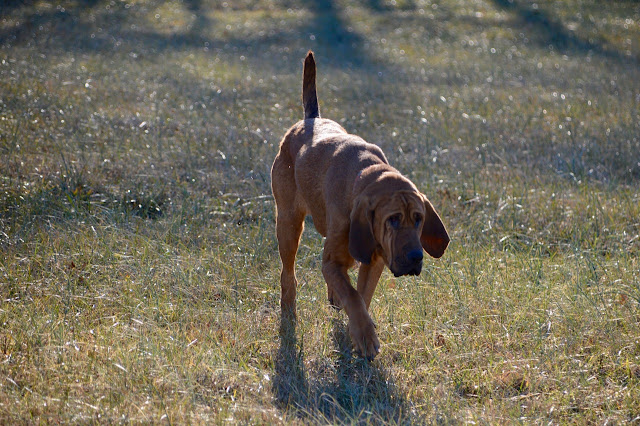 Maybe she was getting cold and wanted to get home, I'm not sure. She let Sadie know she was headed home. 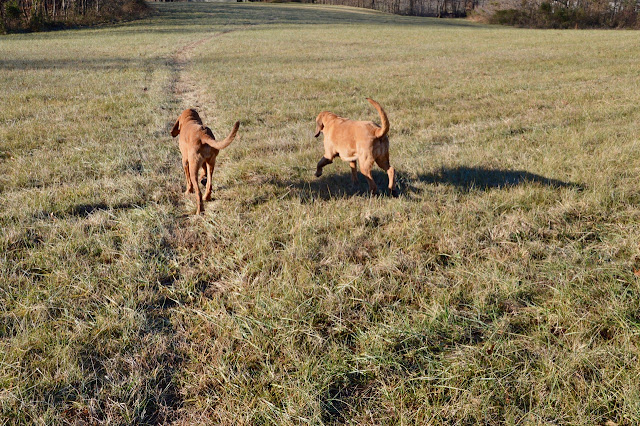 By the time I am almost at the edge of the backyard, Sadie gave me that stare again ... only this time she wanted to stay outside. 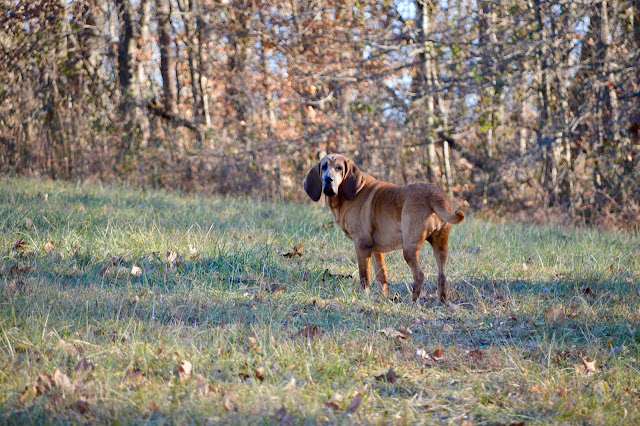 Stella was in no hurry to come inside either so I let them roam while I picked up more twigs around the yard on the north side of the house. When I made it back up the hill after a quick trip to the mailbox, both of them were waiting for me at the door, thinking I had left them and had gone inside. 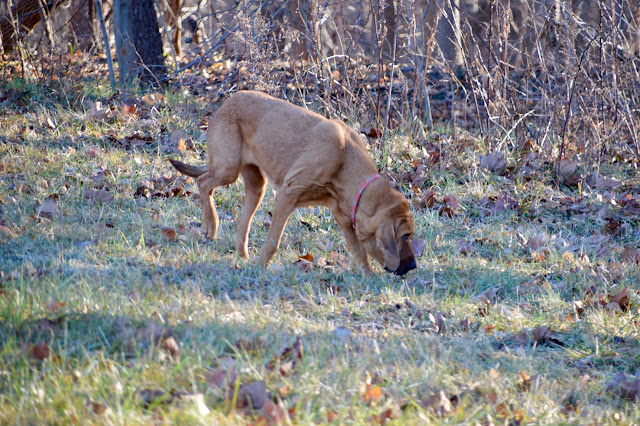 Stella had to come to remind me it was time to feed them lunch. A quick nudge by her nose gives me the first warning shot, after that she will move to the howling stage which gets Heidi out of her deep sleep into a barking mode. I find out within 30 minutes if I am really behind in the feeding schedule.

I tried getting a picture of Heidi today to let everyone know that she really does have a pulse and actually gets outside her (mine) sleeping bag. She was so quick I barely caught her as she was moving under the yews and out to the front yard. 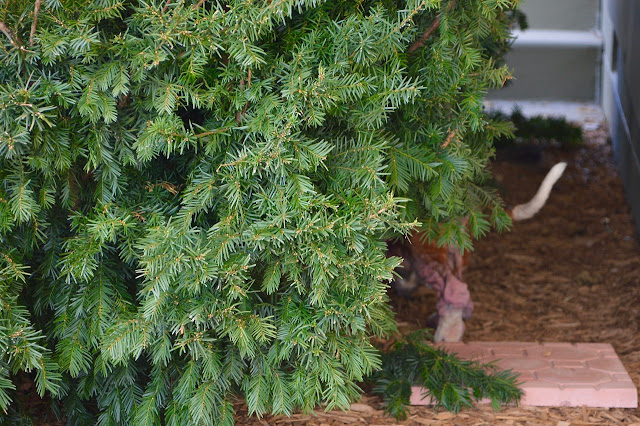 Stella debated whether to head out to the field or back inside. She is also not a fan of cold weather and since this morning, winds had picked up and was blowing freezing air from 15-20mph. She turned and went back to the house with Heidi and I. 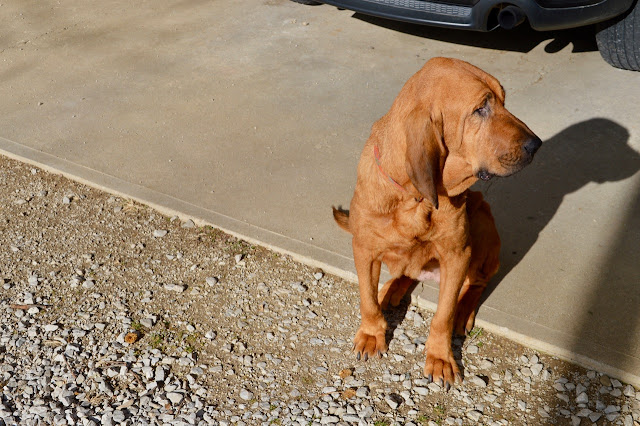 Sadie never cares how cold, how much rain or snow ... she just loves being outside. I let her hangout in the field for almost an hour, then I hooked Stella up to the retractable leash and went for a 'supervise' afternoon walk. The winds were stronger and the air was colder coming from the west. Sadie was happy with a 2nd walk and was quiet the rest of the afternoon. 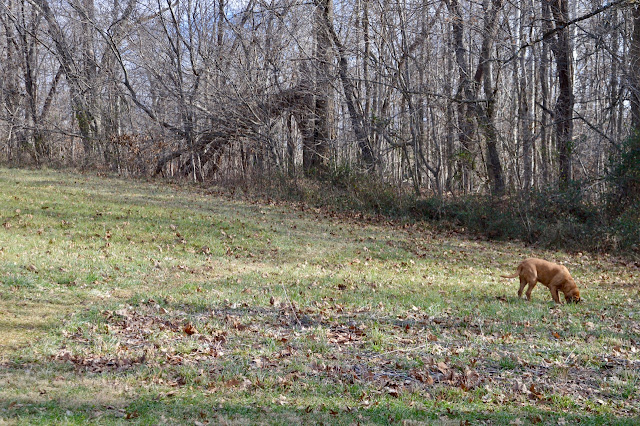 While they spent the rest of the afternoon sleeping, I spent time setting up all of my new spreadsheets for 2017. Seems like it was a pretty fast year and some of the spreadsheets were showing some interesting results over the past year.

It is another night of no interest in watching the 3 college football bowl games being televised so it might be back to book reading or watching a movie.

I almost forgot ... Heidi had a 20 minute soak in warm water and Epsom Salts. She likes that enough that she almost lays down in the water but that would put her head barely above water. Her skin looks good but compared to past Decembers, it's about the normal condition for this month. I've thought for the longest time this year her skin problems are airborne allergies.

As long as the sunshine is out, we are happy here in 'the tropics' of southern Indiana.
at December 29, 2016