Coldest Day Yet Makes Me Ramble 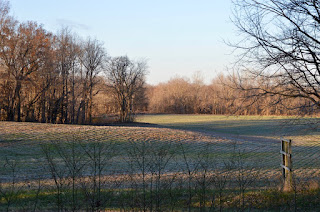 There was no early rising this morning, normal time. A chill was in the air, colder than I have felt this fall so far.

Normal routine with all 3 hounds outside the very first thing, while I pour the breakfast kibble. All of them are waiting at the door by the time I am finished and the only time they are not interested in roaming in the field.

Yet, when that door opened for the first time to let them out ... a rude awakening ... it was freezing and the wind was blowing to make it feel even colder. 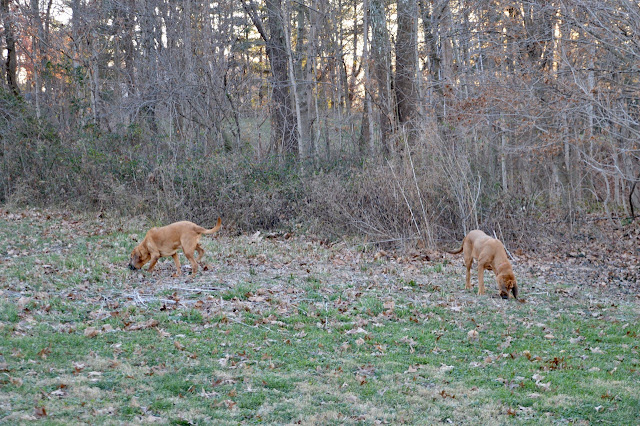 My iPhone weather app was saying it was 21° and felt like 10° at 8am. I was doubtful it would warm up too much while I had my hot coffee and checked the latest sports, news and blogs online. Sadie hit me with her stare around 9:15am to go for a walk ... it wasn't happening. I wasn't finished with my 2nd cup yet and I could tell it was still cold outside.

By 10am Sadie won the stare down contest. The Oboz hiking shoes were put on along with the down coat, wool cap under the hood along with ski gloves. I wasn't too far into the walk and I could tell it was really ... really cold. You'll see though it doesn't affect the hounds. They were on their walk and happy. 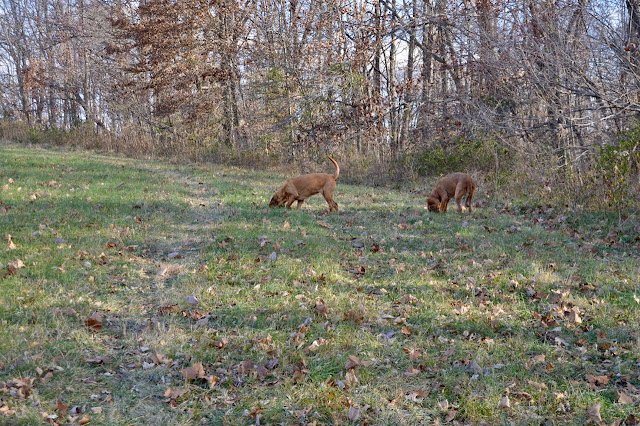 Stella hung back and I kept walking and picking up my pace a little. I was hoping they would both come toward me on the way back if I yelled their names. 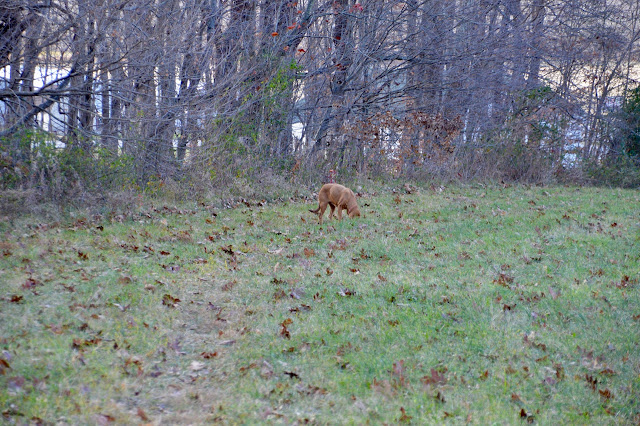 You can see in this next picture the worn path that Sadie has her nose buried in. That is a path worn down by deer traffic and followed along that brush all the way to the far right corner of the field. 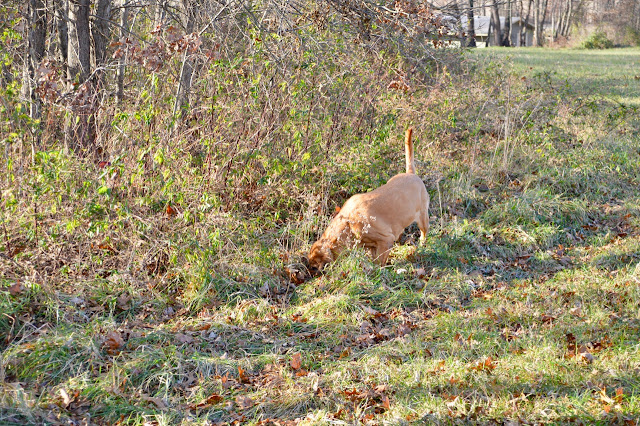 I continued walking fairly fast. My face was frozen, finger tips were cold even inside the ski gloves and the wind was stronger than we had felt in a while. The weather app was showing 20mph winds from the west.

Just as I turned around to see where Stella was, she had already sprinted up to catch Sadie. 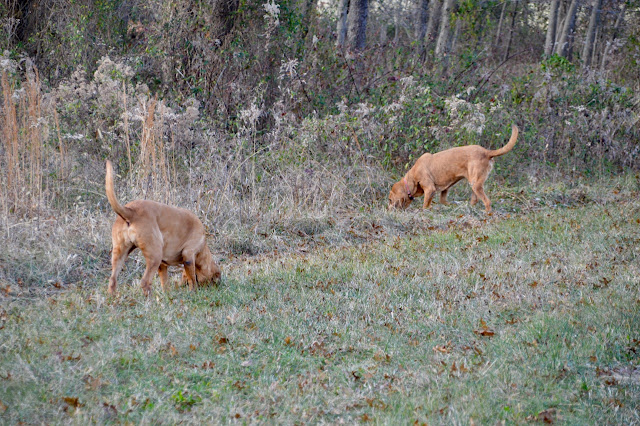 I turned and kept walking, veering along the path following the back edge of the field. Both hounds were in their favorite far right corner. 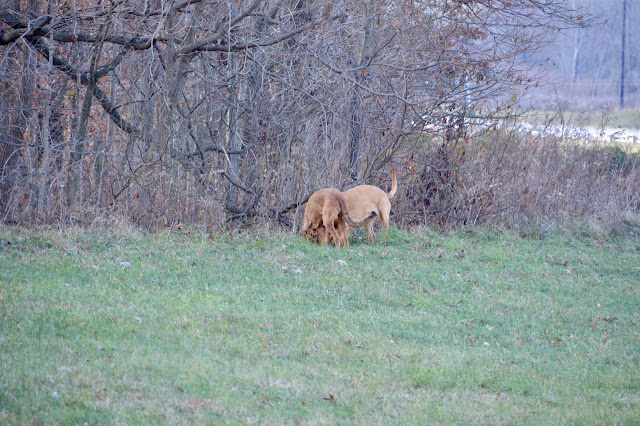 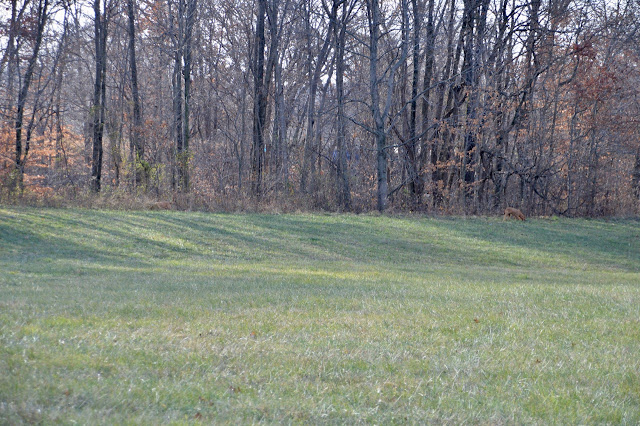 Just as I made the final turn to head back home the wind hit me squarely in my face ... instant freeze. Sadie glanced up and saw I was heading back so she came running toward me. As she ran up next to me she nudged my hand with her nose, I guess letting me know she was there. 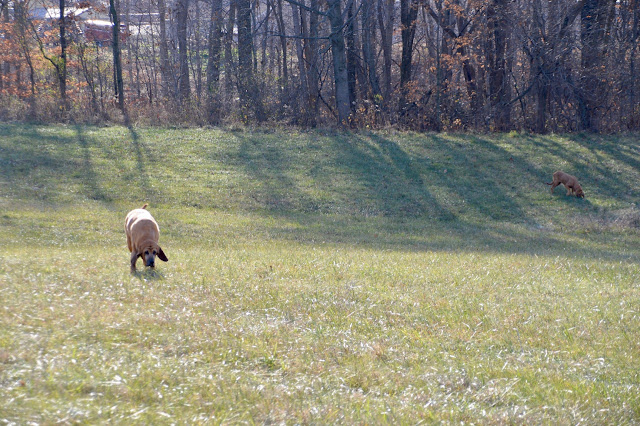 It took Stella a little longer but she came the first time I yelled her name. That doesn't mean she will walk straight to the house though. She always has more places to stop and explore. 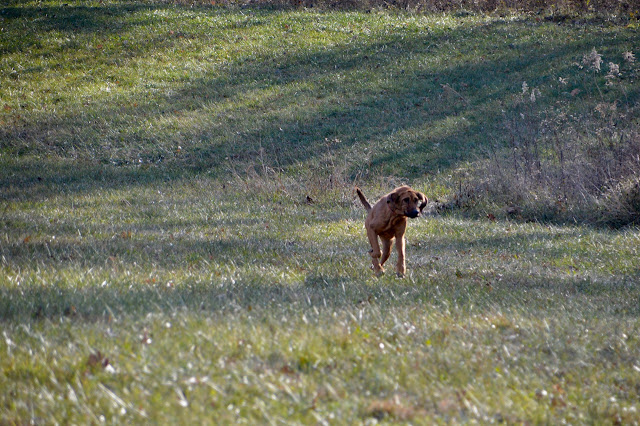 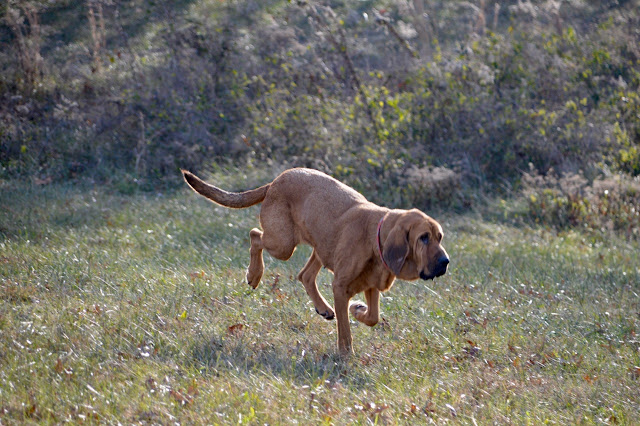 She might be headed your direction but in an instant she can turn in a different direction if her nose picks up something she just has to smell. 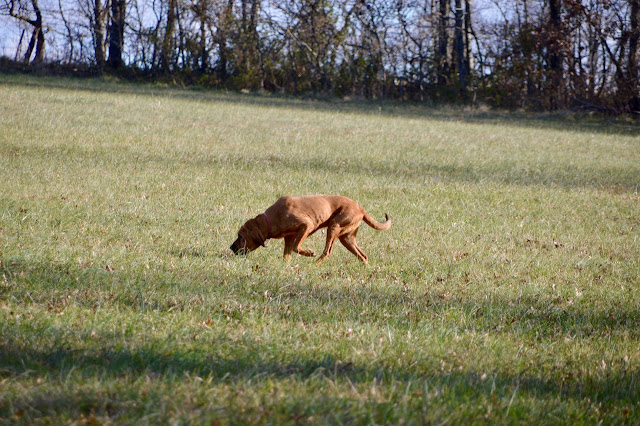 I was happy to see both hounds fairly close to each other and kind of heading in the right direction but they were slow and I was freezing. 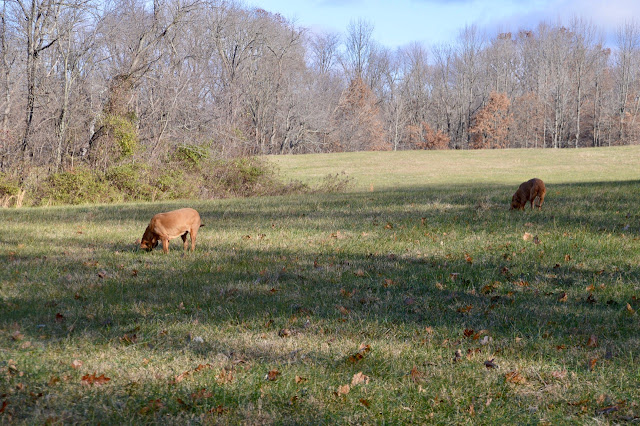 By the time I got to the corner of the house they had not moved but my camera lens zoomed into 200mm to get this next picture. I could tell they were not interested in coming inside. I was, I was freezing. 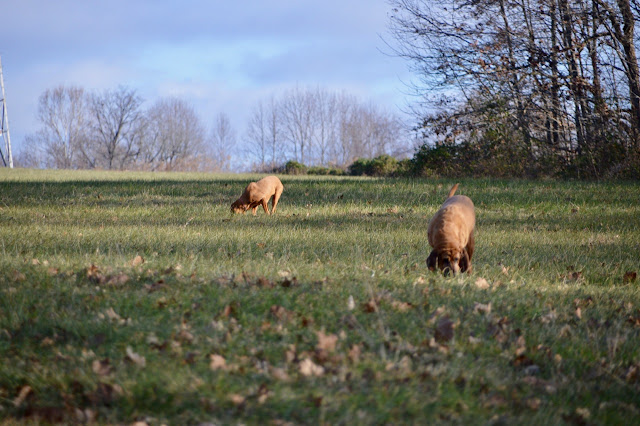 By the time I got my coat, gloves and cap off and just had slid the SD card into the computer I hear Sadie run up against the door to let me know she wants in. I glanced out the window to see that Stella had not moved. It didn't take another 5 minutes, to see that Stella was no where to be seen when I looked at the window ... I had to go get her.

She had ventured over to the woods behind the neighbors house, another area the deer like to hang out. She came when I called her but she knew she had gone outside her boundary. How did I know? She had her head down and her tail tucked between her legs as she ran for the yard.  Smart hound.

By the time lunch rolled around, the house was cold. Some of the newer readers don't know about my effort to save as much electrical use as possible during the winter. I pay my electric bill on 'the budget plan', meaning I pay the same amount every month whether the AC is running full steam ahead in July or the baseboard electric heaters are running in the summer. 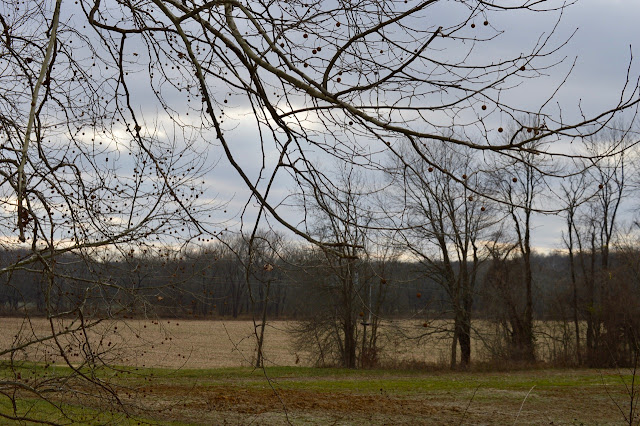 Long time readers know I like to analyze and I love Excel spreadsheets. So I have both on my electrical usage. Granted it was a warmer than usual winter last year but the summers were hotter and I was still able to get a $120 refund check in the mail last May, which is the month that the utility company settle up ... they either pay me with a refund or I pay them the balance where my total monthly payments didn't cover the bill. The the monthly amount is adjusted for the following 12 months.

My spreadsheets show if I am on track for a refund or expect to pay. I also do it not only for financial reasons but also trying not to waste electric. Similar to recycling all of my paper, glass and plastics and also taking one 32gl trash can with a 36gl bag of trash for $2. It looks like in 2016 I will have paid only $18 in trash ... before the circuits in my brain lit up last year I was paying $20 per month to have the truck stop every Thursday morning at 4am to pick up that one 36gl trash bag. There were some weeks I had no trash to set up ... so I now paid $18 instead of $240. 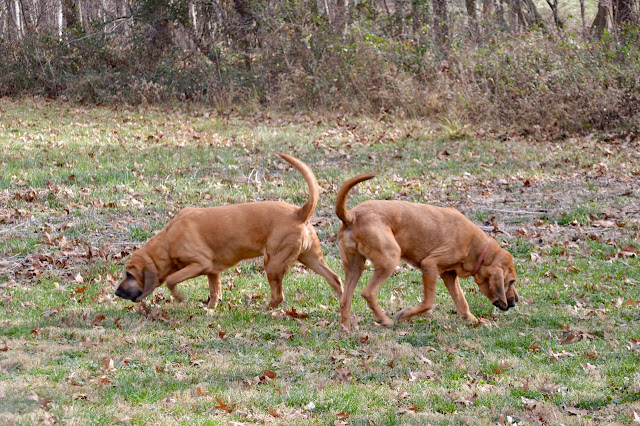 I am not broke being retired, I have plenty to live on and still save/invest excess funds every month ... but I hate 'wasting' money, no matter how small it might seem. That was a major conflict of mine while working in the government either as an employee or contractor in the field of account. There was so much waste it made me sick at times.

So I will continue to monitor the cost of turning on some heat every once in a while. Today around noon was one of those times. My living room was down to 52°, my computer room was at 56° and my hands were cold. So we blasted the heat for a timed hour  but after only 35 minutes I was too hot!!!! I had used only 3 kilowatts including all the other electrical appliances running and the room temperatures rose higher than I am comfortable with ... such as being too hot. 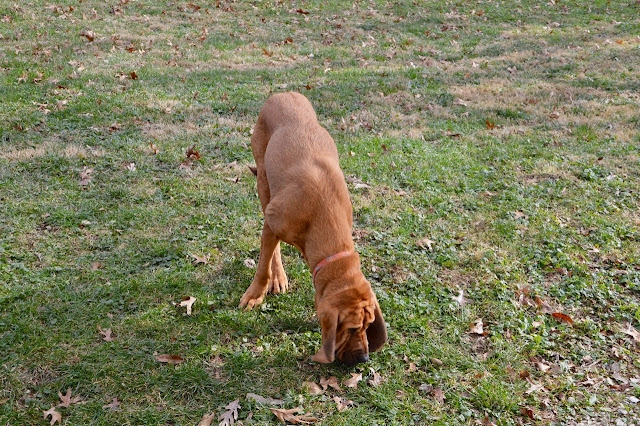 While talking to a DirecTV rep last night about AT&T's offer of free data while streaming on any device through DirecTV our conversation got off track discussing different internet browsers. He too had used Google Chrome for a long time but said he found the recent improvements on Firefox make it his default browser and that I should check it out. 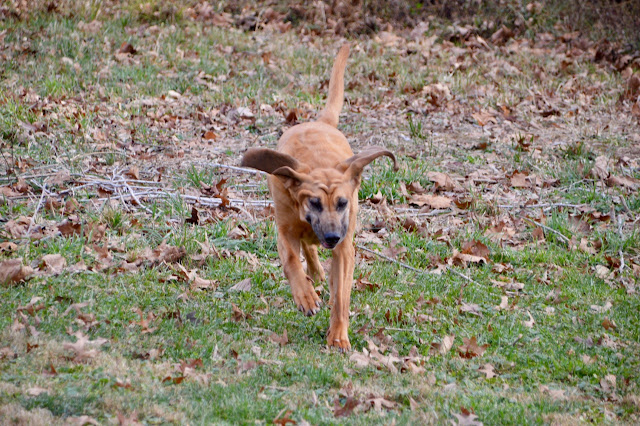 In our discussed we even went as far back as Netscape, my favorite browser from the mid to late 1990's. He told me that Firefox was built off that platform and all the big companies had invested money into Mozilla to build a safe and secure browser many years ago and continue to supply funding today. Those were Microsoft, Apple, and Google ... all competitors in the internet browser industry.  So that is what I have been using since last night while make a few preference tweaks along the way. 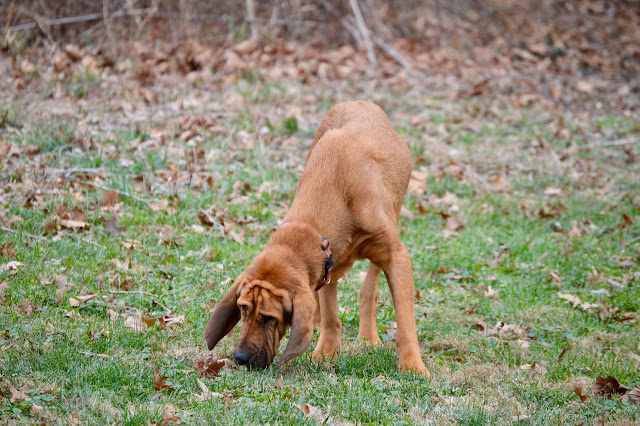 Al over at The Bayfield Bunch posted last night that he too was noticing his photos on Blogger just didn't seem sharp and clear. I made a comment on what I had found. He and Mark had been discussing this issue and it's a discussion Mark and I had last summer about the same problem.

This is what I have found even as recently as this morning when I made a post on my Wordpress blog as well as when I wrote about it on this blog last winter and last summer. The same photos on this blog don't look sharp after they are posted ... EXCEPT ... when I look at them on Apple's 'retina' display which my iMac does not have but my iPhone, iPad and MacBook Air does. One those devices these photos are sharp, clear and crisp.

This morning when I posted on my Wordpress blog those pictures were sharp, clear, and crisp ... same pictures. So it has to be something with the Blogger platform or Google might be compressing the picture file size like they do in Google Photos. 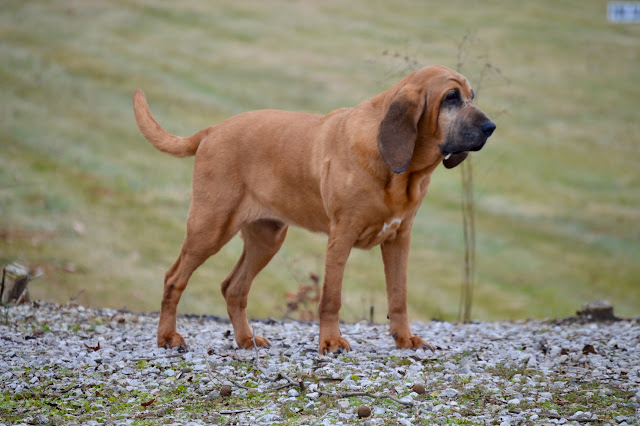 On another topic ... I continue to see the Bloodhound breed is MUCH MORE DEMANDING than the Basset Hound breed. At times that is a PIA. I have mentioned here in the past 6 months or so that after these hounds have passed I would be houndless for the first time since 1987. I do not plan to replace them with other hounds ... but lately I've been thinking that might not happen but I will test the waters so to speak about life without any hounds. If I were to have just one hound it will be a Basset Hound not a Bloodhound ... too different and too hard to handle as I would get older. At times I forget how old I really am, I don't feel my age.

I do know that if I had just Heidi or no hounds I would be out in the middle of the desert somewhere boondocking with a small trailer or tent camping. There is NO way that Stella would be a good camping hound ... to obnoxious.

We made numerous trips outside today and Sadie would have probably stayed outside forever but Stella was always running back to the house after dumping her tanks. Due to the freezing temps we cancelled the afternoon walk. 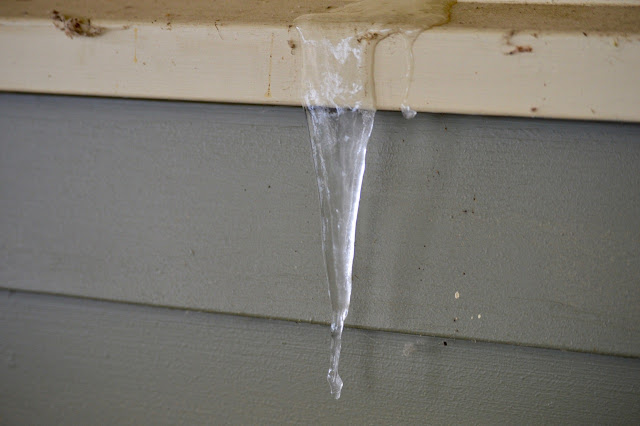 I know winter has just started but how many days until spring?? It's too cold for me here in 'the tropics' of southern Indiana.
at December 08, 2016