Stella's Back On Track 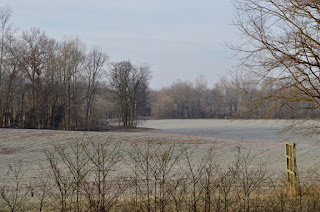 The day started early with Sadie waking up and wanting to go outside at oh-dark-thirty in the morning. Let just say it was a quick awakening standing outside with her in those low temps.

It was okay though, I had a couple of things I needed to do and wanted to get to their offices when they opened at 8:30am. That gave me time to get a couple of cups of Seattle's Best coffee into my bloodstream, let the hounds out a couple of times, check weather, news, sports and texts from friends.

It looks like they have left some pretty good wood behind. I don't know if they plan to let it lay there and rot or have friends come in and cut it up for their own use. 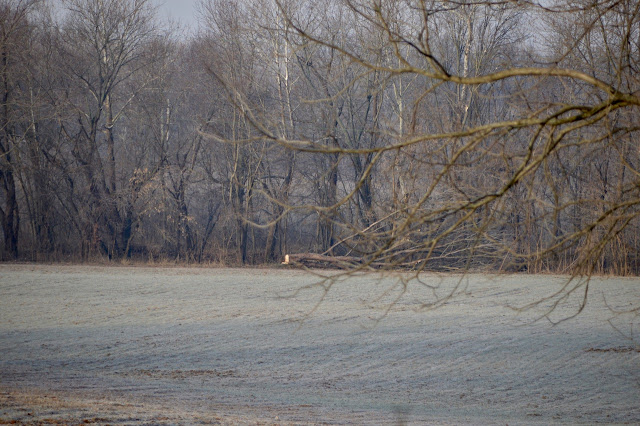 Over towards the corner of the field, it looks like the tree clearing was contracted out by the local utility company, maybe AT&T. Their phone lines and utility power lines follow that gravel road to the closed steel bridge then goes across the creek to the main road on the other side. 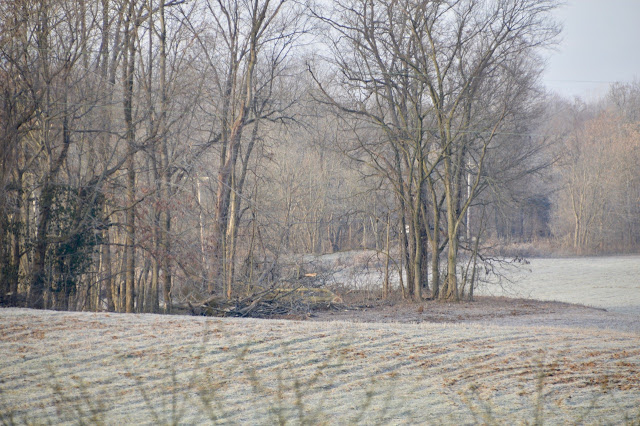 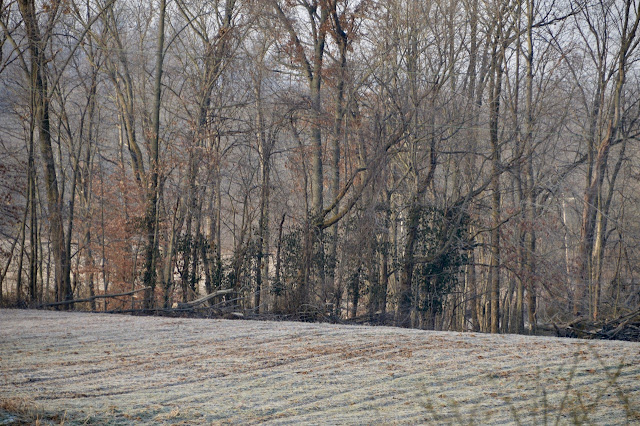 I drove over to one of two local BMV's (DMV to some) and registered the Mini Cooper S Countryman this morning. The office in my town cut back their office hours to two days per week a few years ago, so I go to another small town about 12 miles away that is open three days per week.

I guess the man that owns the dealership where I bought the Mini Cooper knew what he was talking about when he said I could use the truck plates from the FJ on this car. The title listed it as a "Wagon", not a passenger car while the VIN online shows it's an SUV. The AWD had nothing to do with it. Because it was a 'wagon' I can use a 'truck plate' that I have transferred over the years from truck - FJ - FJ - Mini.

I only renewed them to my expiration date in April 2017 because I am not sure if I'll keep the 'truck' plate on the car but I do know that I don't want the new 2017 Indiana plate they voted for this past summer. Indiana is one of the few states that change their license plate design every 5 years. Most of the best designs always get discontinued.

At the same time they are also one of the few states that give you over 30 different plates to choose from where your additional payment of $40 is donated to that specific organization and some of it to the state. So between now and April I'll decide if the 'truck' plate stays on the Mini Cooper S or I buy a specialty plate or a personalized plate. 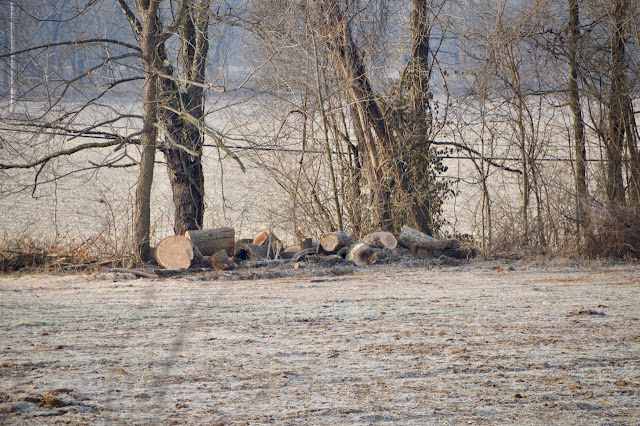 I also stopped by the court house on the way back to check on my property tax as well as some explanation on what is the correct property line. There is no issues with the property line but everyone involved seems to have their own idea. At this time of day, the BMV and Court House did not have waiting lines so I was back home by 9:03am.

It was time for a walk, earlier then normal. The hounds agreed and we were off a little before 9:15am for the first walk of the day. Heavy frost made the grass and leaves on the ground even louder with each step. No wind made it nice and Stella continued walk along with us without a leash.

There were a few "come on" and a lot of "good dog" along our walk. She is now sitting beside me at 10:54am wanting to be fed her lunch a few hours earlier than normal. I say a few hours earlier because I normally feed them at 11:30am  but she has been letting me know she wants to eat since 9:30am this morning. As I wrote this, she had not got to the stage where she howls ... but if I don't have the kibble poured out soon, that will be her next step. 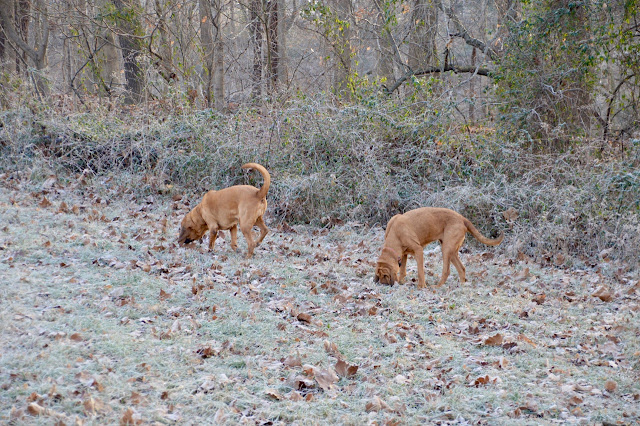 I don't really celebrate Christmas anymore and haven't for years, so that may be the reason it doesn't seem like Christmas yet this year. Yet, I usually get a feeling of the holidays even though I don't do much out of the ordinary. So far not this year it just hasn't felt like Christmas is this close. 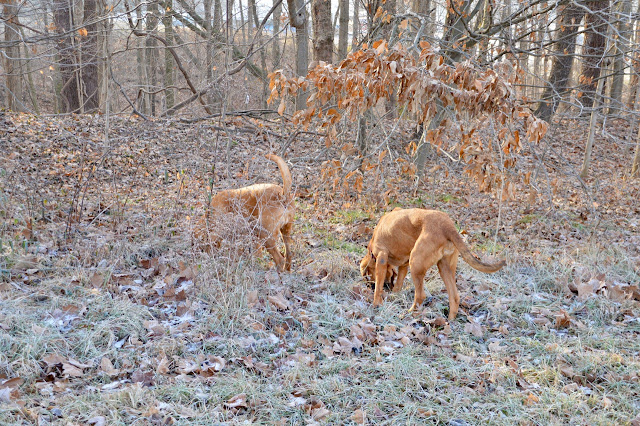 I was hoping to use some new 'used' cross country skis here in the field this week. A couple of weeks ago the forecast looked like it was going to snow this week. That weather outlook has changed to rain and high 50's by this weekend. Plus we never got the snow last week that was predicted. January and February could be a big month of snow this year. 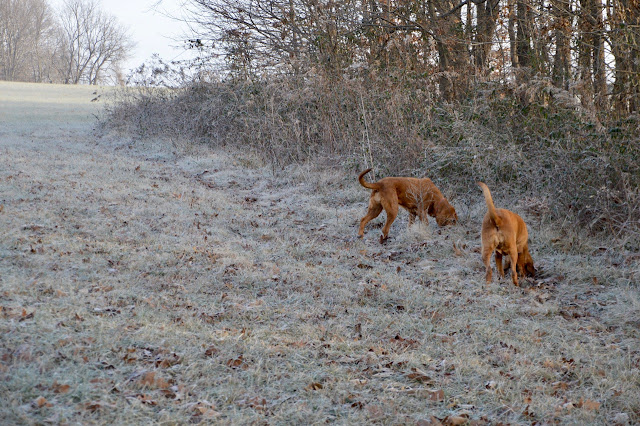 I watched my last show of the season last night on the National Geographic channel. It's called Continent #7, with a team of scientists from New Zealand doing research and collecting data from the purest environment on the planet as well different wales. It was amazing to see how such small sample sizes could be loaded into a computer to download data, videos and how they collected this data.

The planet is getting warmer based on all the data they have collected over the years in Antarctica. 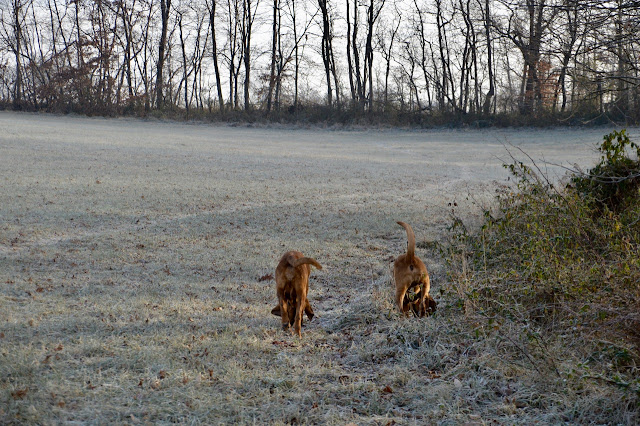 This morning Stella continued to be out front for the walk. She showed no urge to lag behind in those spots she would never leave just a few days ago. Also neither one headed for the far right corner this morning.

They almost acted as if they were getting cold and wanted to get back to the house ... just a guess. 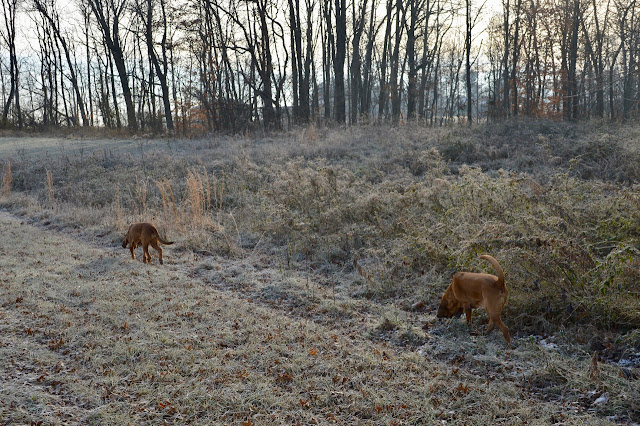 Some of the pictures this morning were edited, while others were straight from the camera and not touched. I think in most cases I like the UN touched pictures the best. 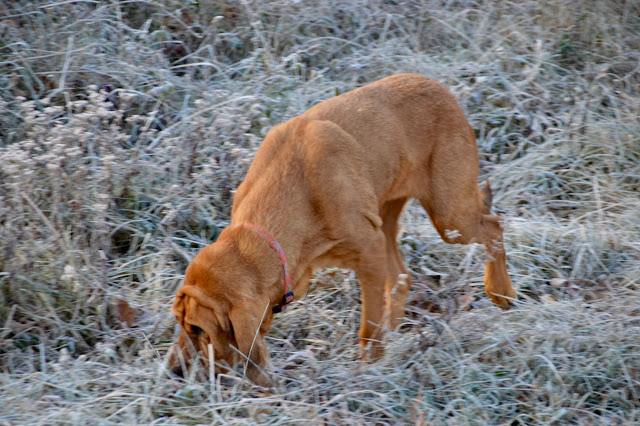 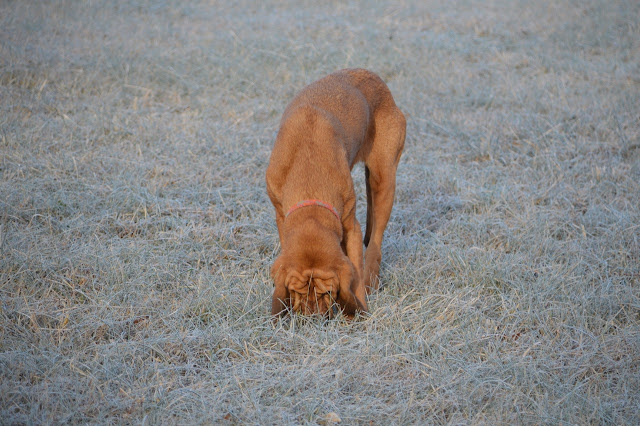 I actually thought when we started the walk there might be a good chance to see some deer. I have no idea what hours they are out but 9:15am seemed to be a good time this past summer when we did see them. A few days ago about a half mile down the road in a small field I counted at least 10 deer grazing as I drove by. 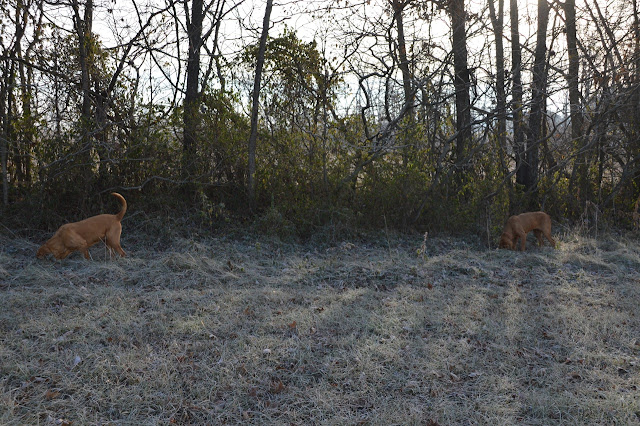 There is always a difference how each hound positions their tail when their nose is buried to the ground. At times it is the only way I can tell which is Stella and which is Sadie in some pictures. 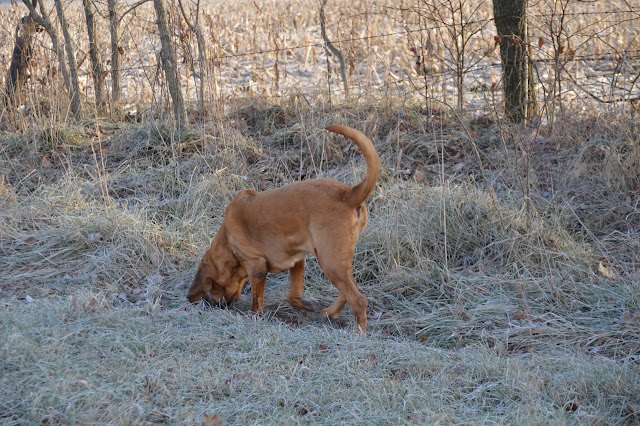 As we made the turn for home, they both ran past me and took off. 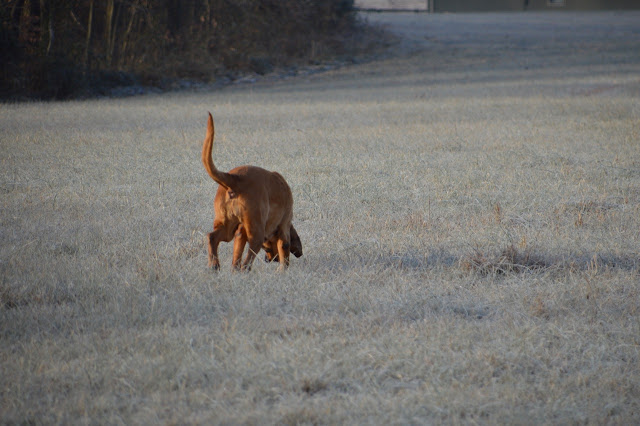 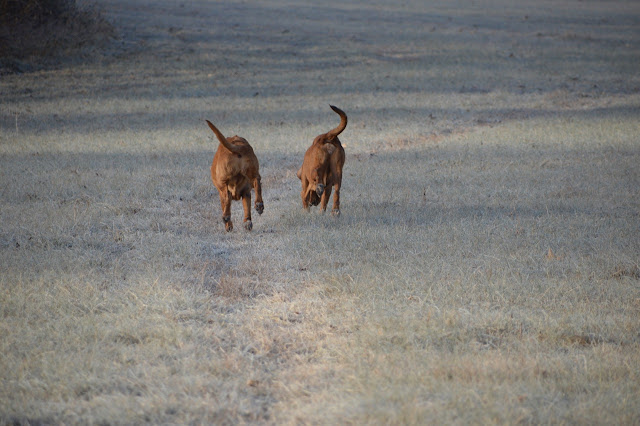 One more short stop on the way though. When they saw me walking by them, the decided to move too. 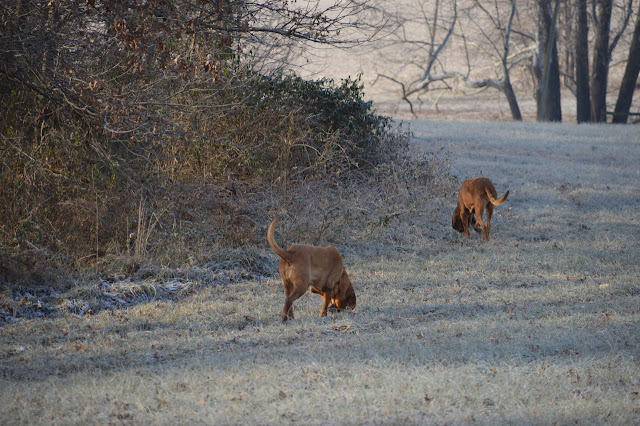 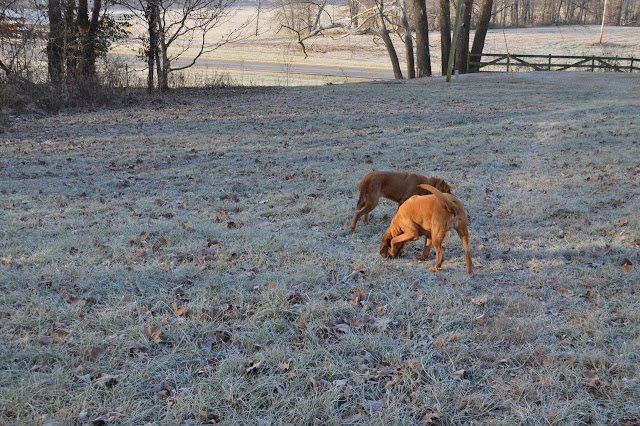 The could have swore they heard me say something about food when we got back to the house ... it stopped them right in their tracks. 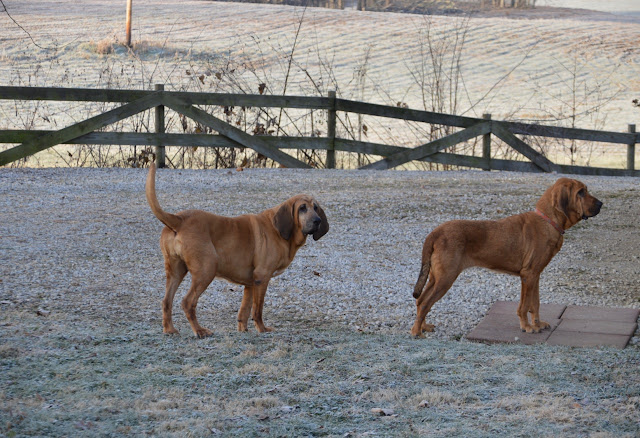 It seems like every day I am adding something new to my Spring To-Do list ... it could be a busy spring and summer this year, unlike 2016.