Stella's On Probation After Monday 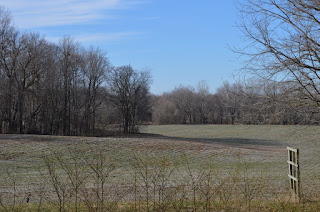 After calling it a day pretty early Sunday night, that only meant the hounds and I would be up and out by 6am the next morning. Dark outside ... and cold.

My iPhone weather app was telling me it was 4° and wasn't going to get much higher than 19°. Little did we know on Monday just how accurate that would be. Consequently not much was done outside yesterday and we barely got in a late afternoon walk.

That didn't stop the tree cutting operation going on across the highway, clearing out some trees along that gravel road that leads to the old closed steel bridge. It is suppose to warm up this week, maybe into the 50's, so I'll grab the Nikon and go see what took place. 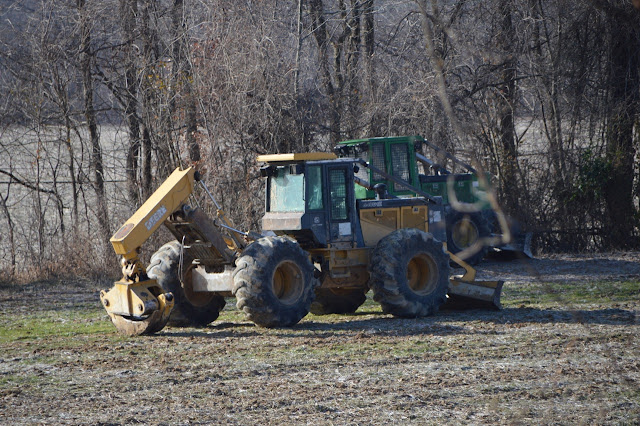 Our trips outside yesterday were not more than just a trip long enough for the hounds to dump their tanks. By 9am the temperature had risen only 1° to 5° ... so things were not looking real promising for a morning walk. At least the sunshine was out. 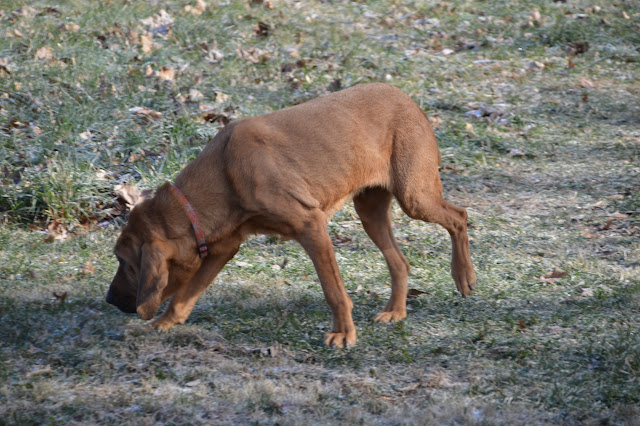 I wonder how many layers of clothing it takes to stay warm while working all day outside in single digit temps. Inside 60° was feeling too hot for me but that seems to be the happy medium to keep the air from drying out from the electric heat and my allergies under control. 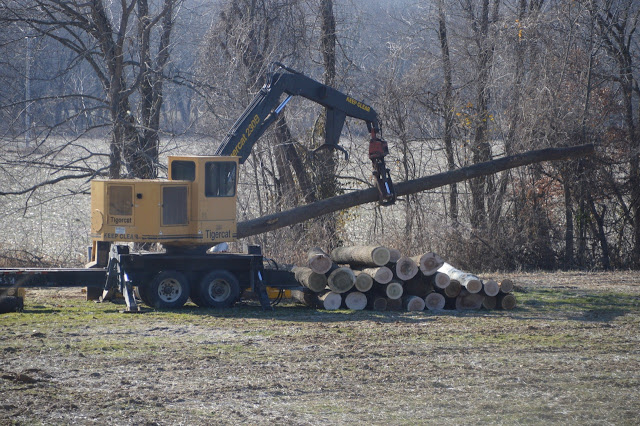 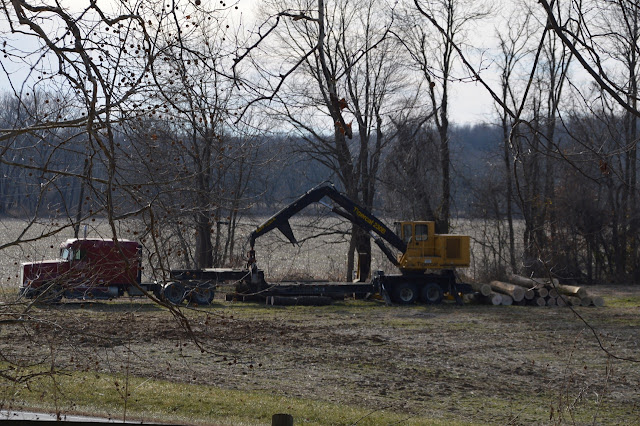 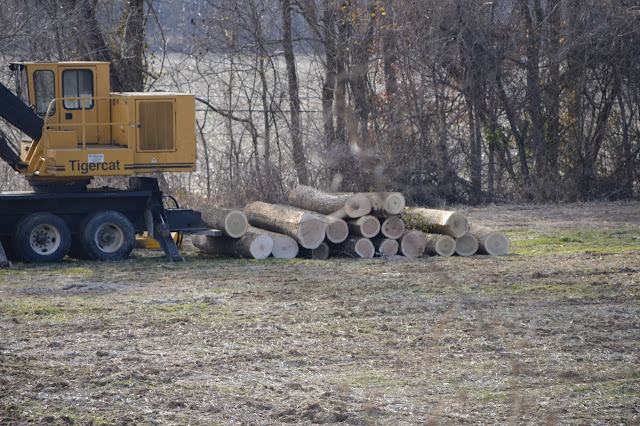 Sometime after 2pm the temps had flew upwards to 21° and with no wind the "feels like" was the same. It was time to get the hounds some fresh air and some relief to their 'cabin fever'.

There was only one problem.

There isn't an answer anywhere on the internet, many have the same problem if you are a dog owner and the hounds are almost obsessed with it ... except Heidi, she would never lower her standards that low. 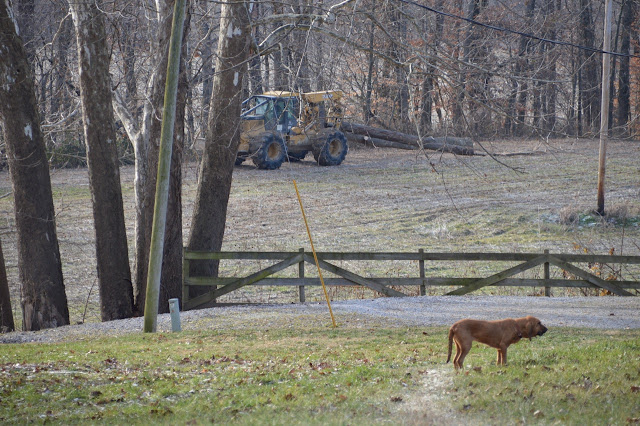 They are called "frozen poopsicles", they are gross and Stella NEVER left the yard. Well ... she was about 2ft into the field ... still not even interested in a walk. Every time I looked through the zoom lens she was chewing.

Sadie in the meantime had places to go and didn't care what Stella was doing ... she and I kept on walking. It was clear blue skies and not bad temperature wise. It was nice to get out. The frozen grass and and leaves had a crunching sound with each step. 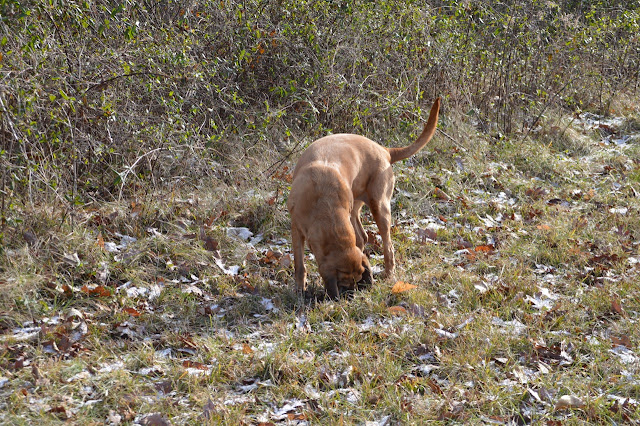 As I turned to check on Stella I had hoped she had at least moved to her 1st stop of the walk, further into the field and show some motivation to get going ... but I was wrong. I could tell by now she was going to be a problem child today. Let's just stay politically correct and say my meter for patience with her has max'ed out the past week. 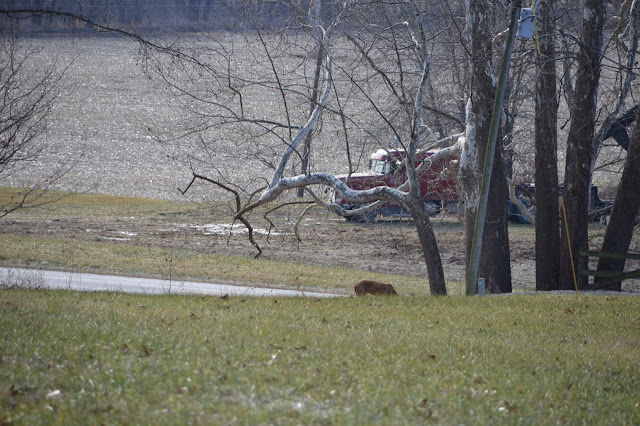 By the first turn of coarse there was no sign of Stella. I figured like the past couple of weeks we would meet her on the way back and continued walking the path as Sadie headed to the far right corner. 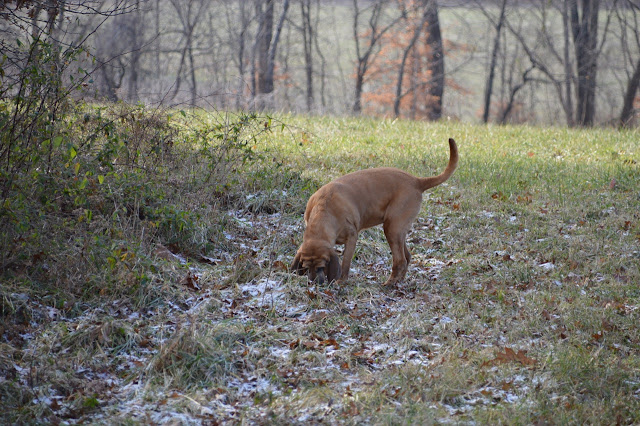 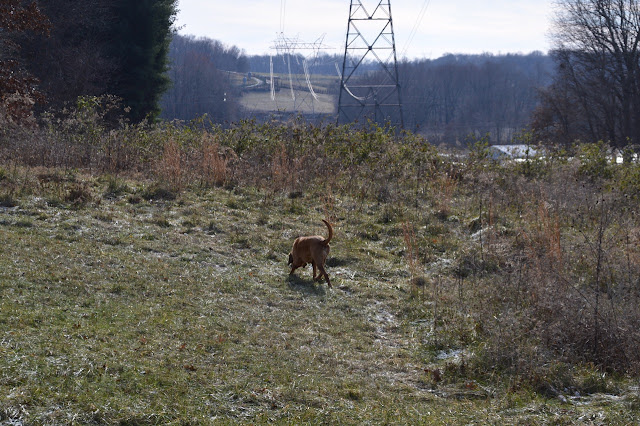 I keep looking for Stella to be running after us ... but not even a sign of her. By this time I am heading for the final turn home and Sadie is deep into the tall weeds toward the gully. Did I now have two problem hounds on this walk? 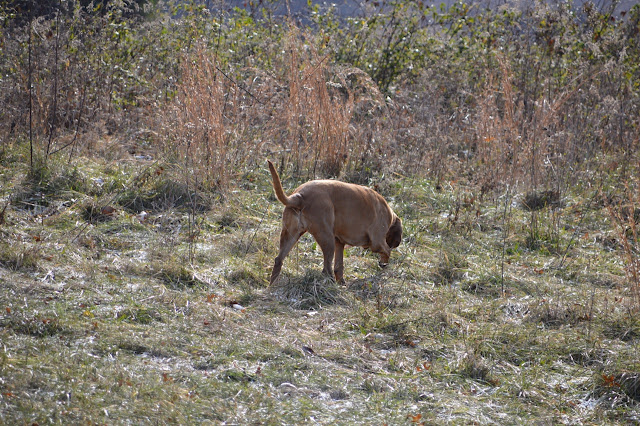 Way up ahead I couldn't believe what my eyes were telling me. Stella had walked north, halfway between the neighbor's house and mine. She wasn't even close to meeting us on the way back. I quickened my pace, concerned she might follow the drainage ditch toward the highway. Obviously a scent had led her in that direction. 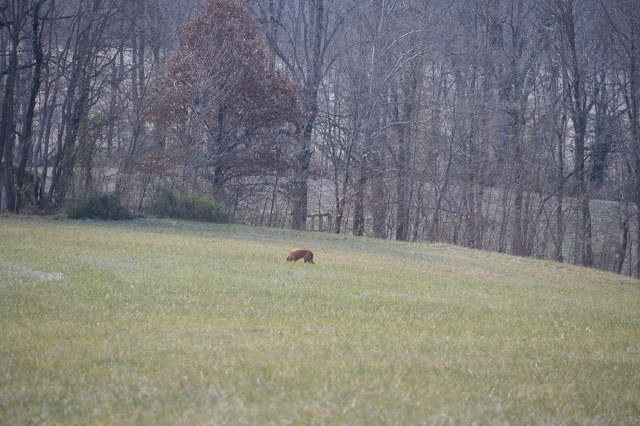 Once Sadie could tell that I was heading home a little faster than normal, she came running without me calling her. She sprinted all the way to me as I was in kind of a semi-run towards Stella. Her instincts were telling her something was up. 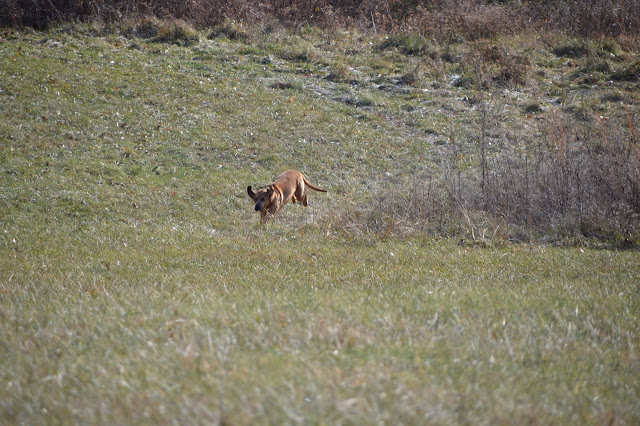 I don't think there is anything that makes me mad more than a hound that is already out of their allowed area, look up at you ... stand and stare at you ... then walk in the opposite direction. My low blood pressure increases to the level of aerobic exercise. 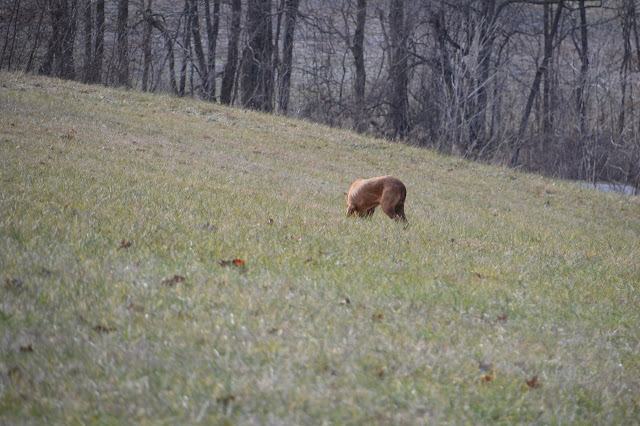 The tone of my voice evidently got her attention enough that she started in the direction of Sadie and I. Needless to say, this was the last photo of the walk ... we headed home as fast as possible. 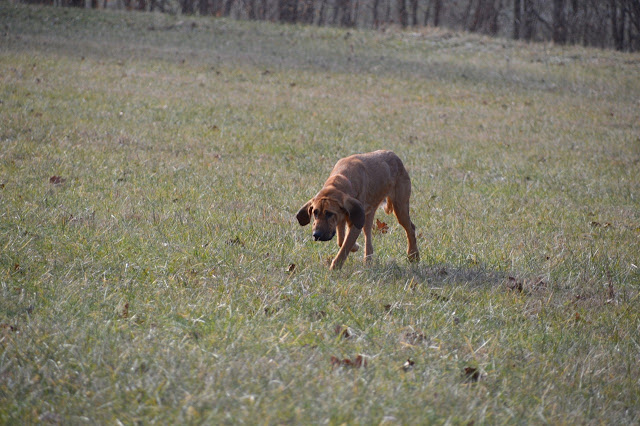 Will it be back to the 25' retractable leash for Stella today??? Stay tuned.

35° is the predicted high today in 'the tropics' of southern Indiana and to me that will feel like a heat wave.
at December 20, 2016