An Afternoon Of Smoke 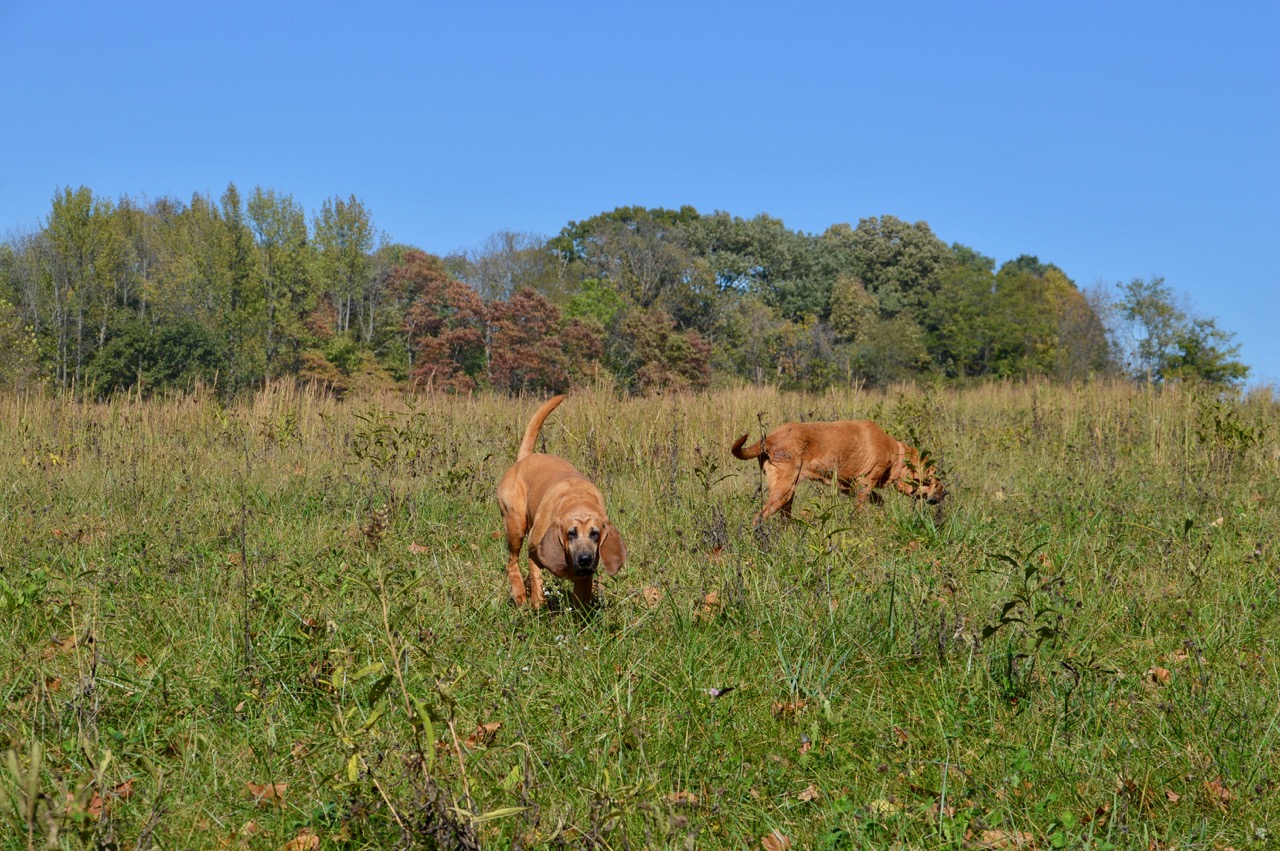 The lighting for taking pictures always seems better in the afternoon than the morning. I changed the camera settings from 'single point' to 'auto area' to see if was just my eyes or better quality. It was the perfect afternoon today with a slight breeze from the south, 71° and bright sunshine. I had yet to feel any kind of the pain I felt yesterday in my jaw. We did have a surprise visitor on our walk ....

You can barely see who it is but look closely and it's a butterfly checking one last time if there is anything left for a short snack. 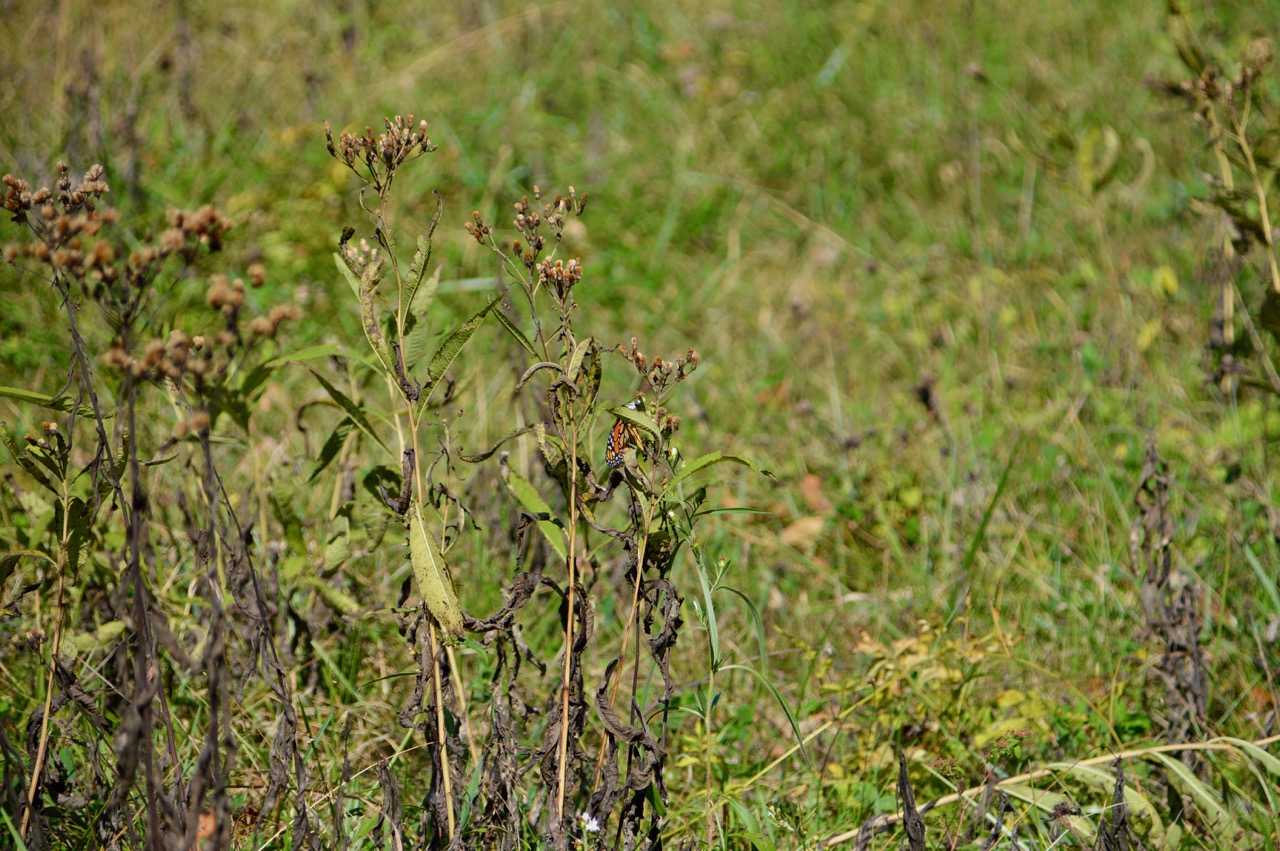 With smoke filling the air and the smell inside my house because of the southern breeze Sadie, Stella and I took off for our 2nd walk of the day and our usual time around 3pm. With the hot summer temps gone we no longer have to wait until early evening for that afternoon walk. Heidi slept while we headed out. 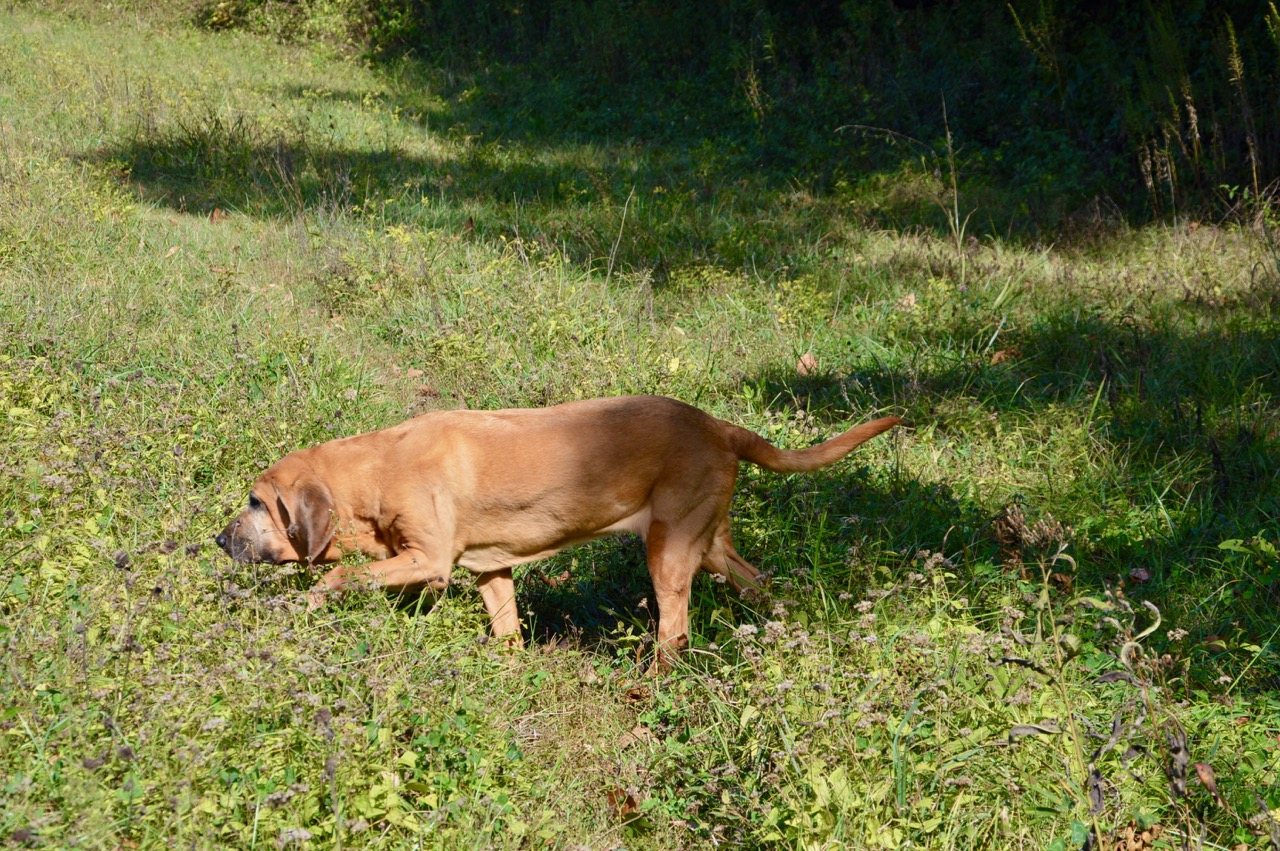 I am seeing some signs of skin redness more and more on Heidi since we pulled out the wool blankets. Is she allergic and I didn't notice after all these years? I'll have to put them away and bring out some of the soft fleece blankets I have to see if her skin makes any changes. 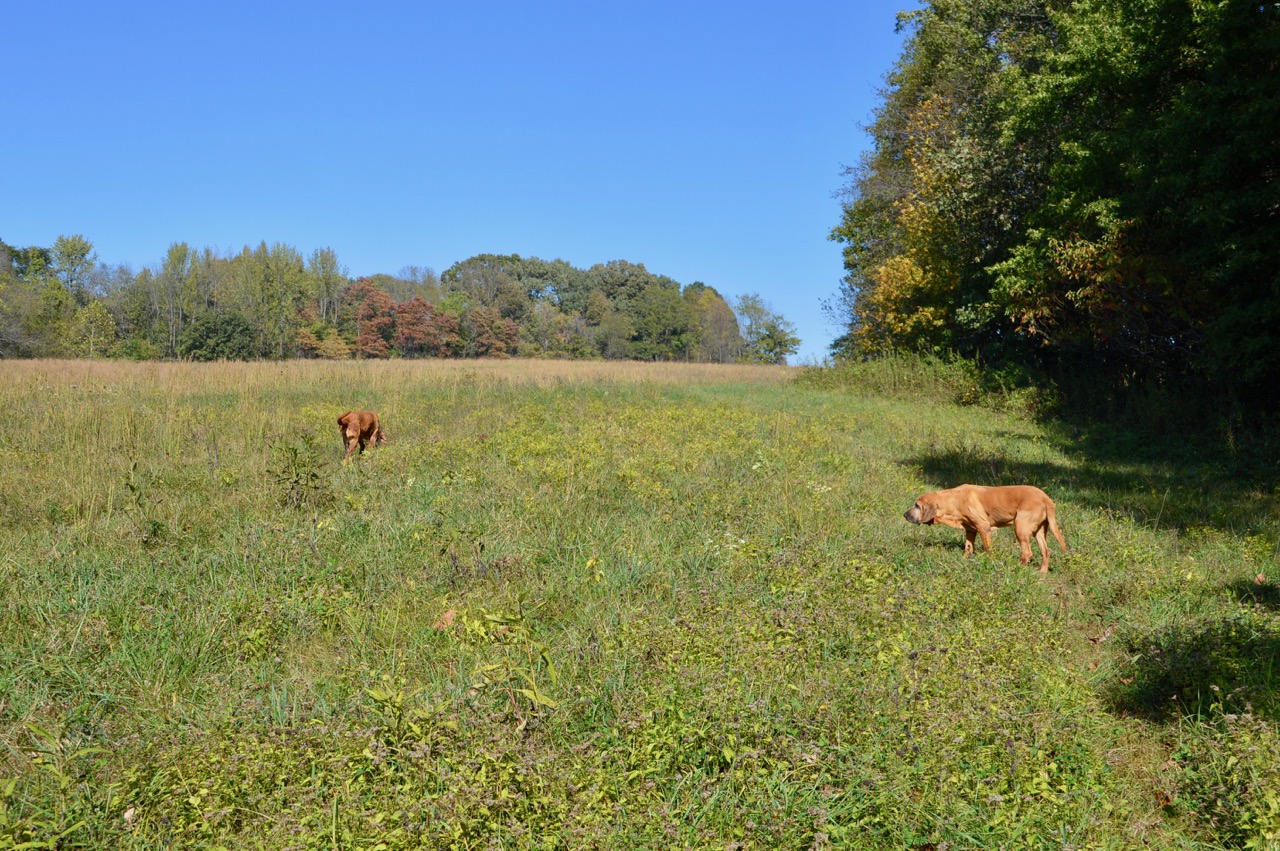 It is pretty common that in the afternoons, Stella may whine to go for a walk but that doesn't maker her faster. She usually strolls slowly along the path or if she wanders off ... still nothing is fast. 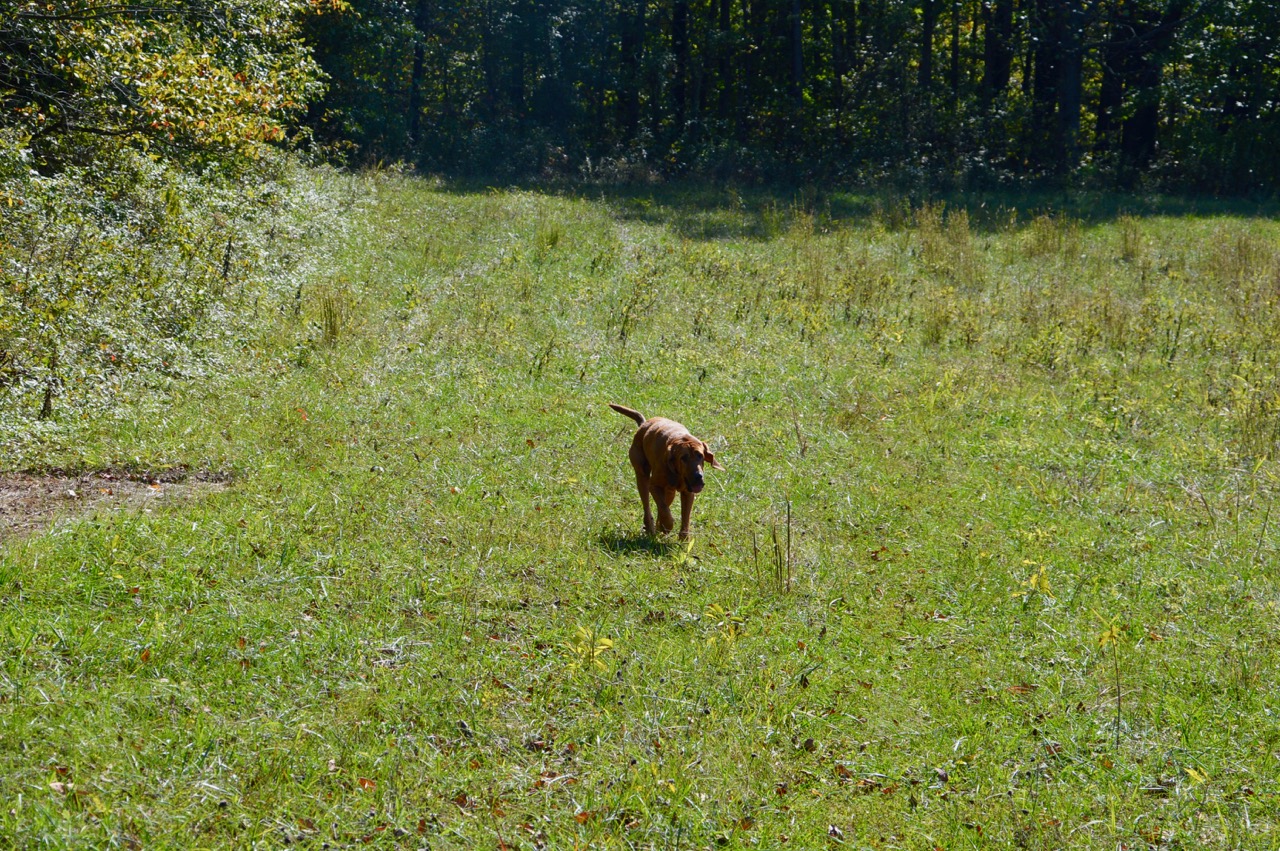 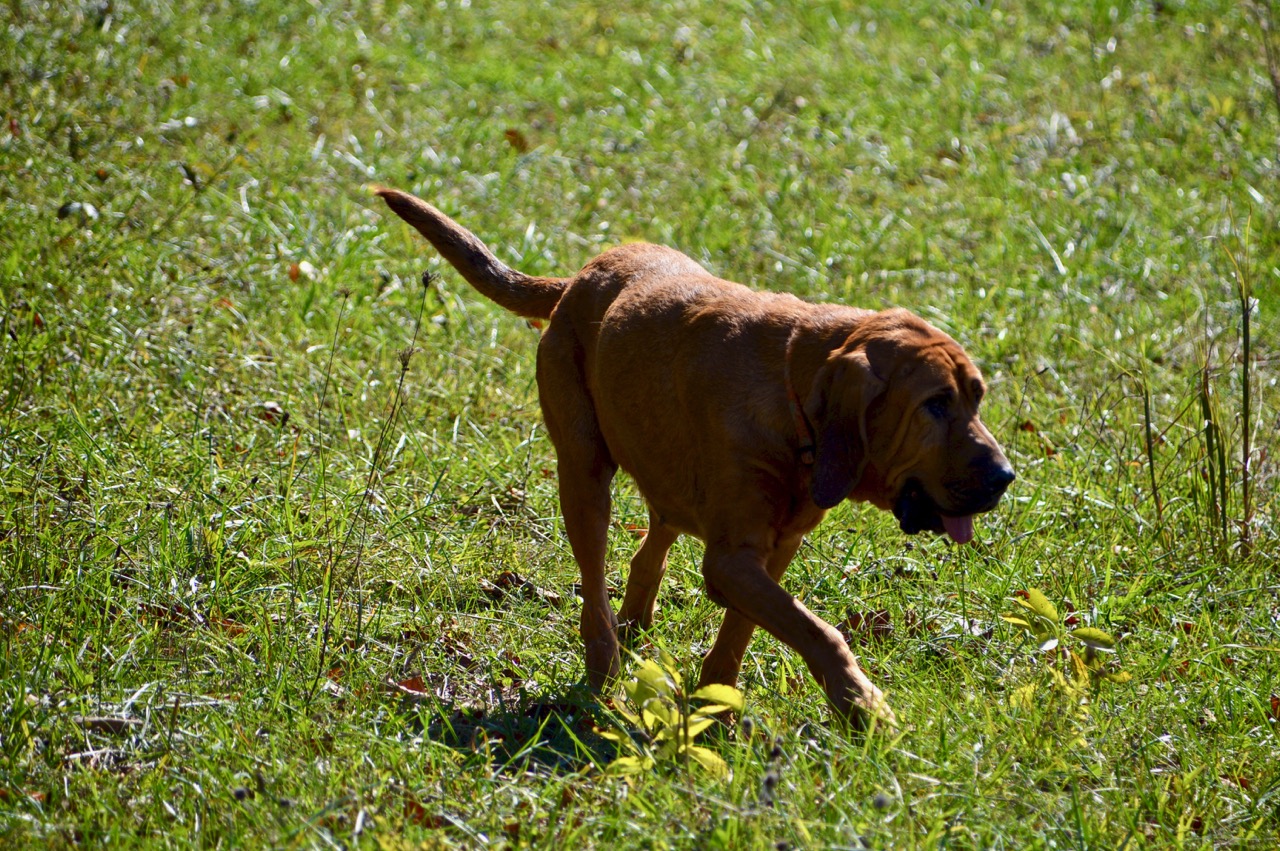 It's nowhere near 80° but today she has her tongue hanging out while she walks ... it didn't feel that hot. 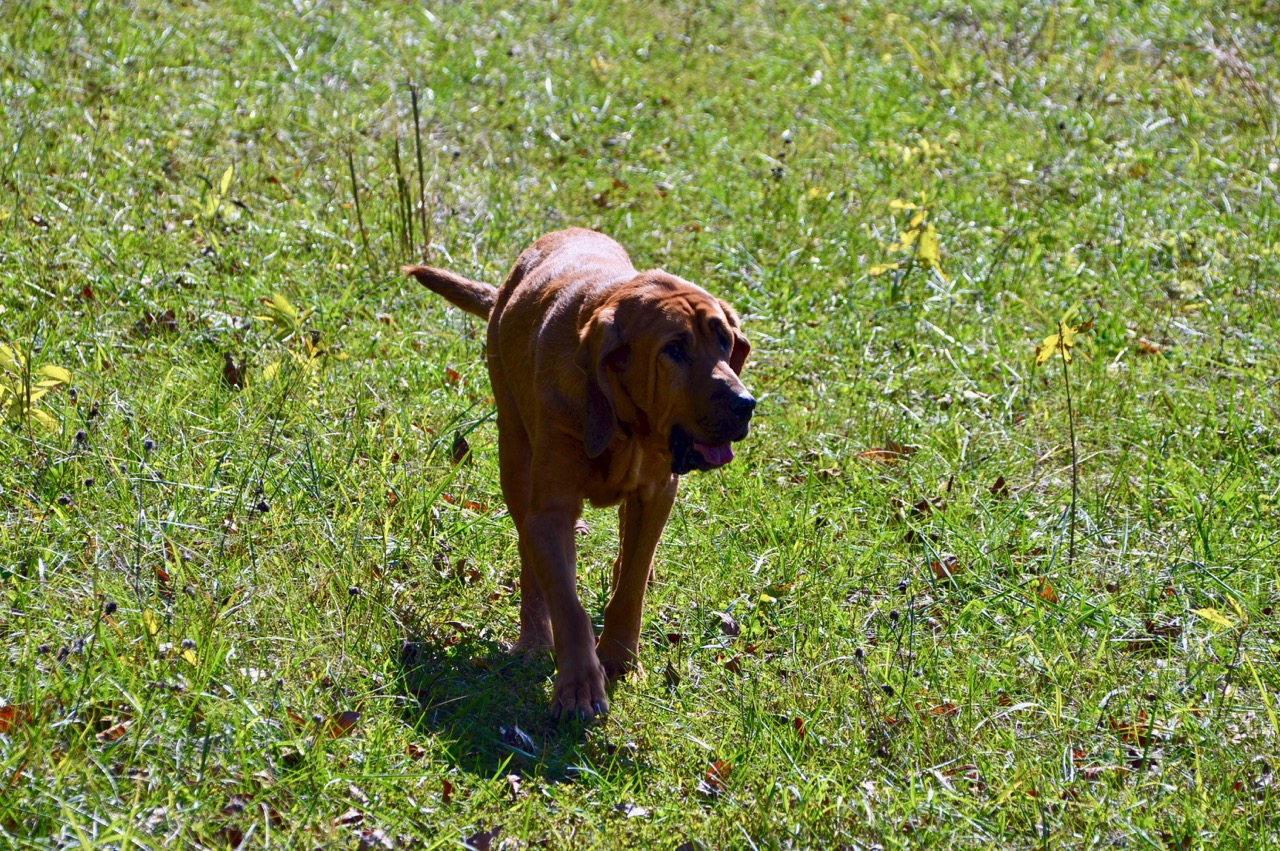 As we got closer to the house I made sure that neither hound got ahead of me, giving them a chance to run down over the bank to help supervise the neighbors brush fire. He told me today he likes winter weather and that was one of the reasons he moved from Texas/Louisiana. He also likes the Sycamore trees so it looks like those large tree trunks will be staying and will help keep the bank together and my driveway in place. I thought at one time the owner of that house would cut them down. 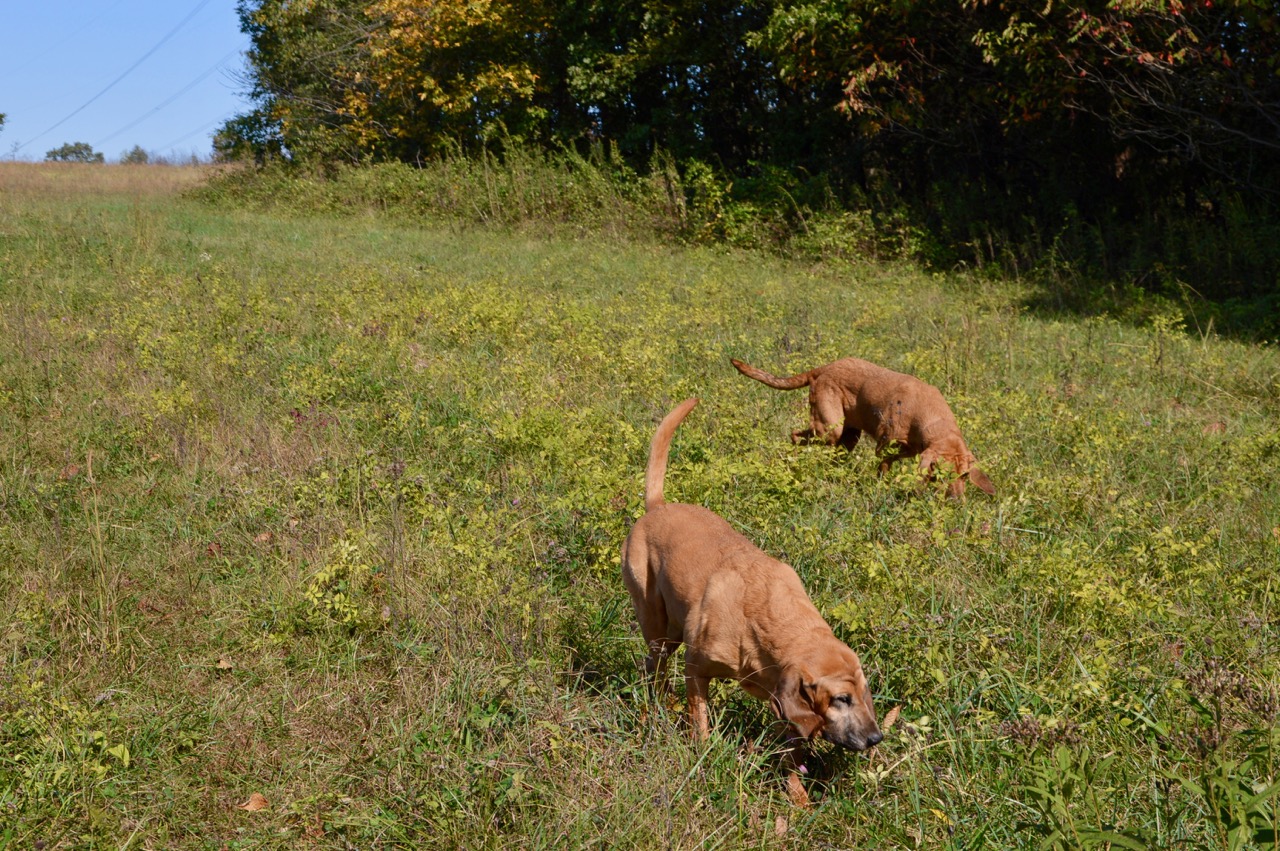 I didn't have to do much work to keep Stella in back ... she does that naturally but I caught Sadie a couple of times stopping to look ahead where the smoke was and I could tell she would like to get back to seeing the neighbor. While I told her "stay here" she walked most the time right beside me. 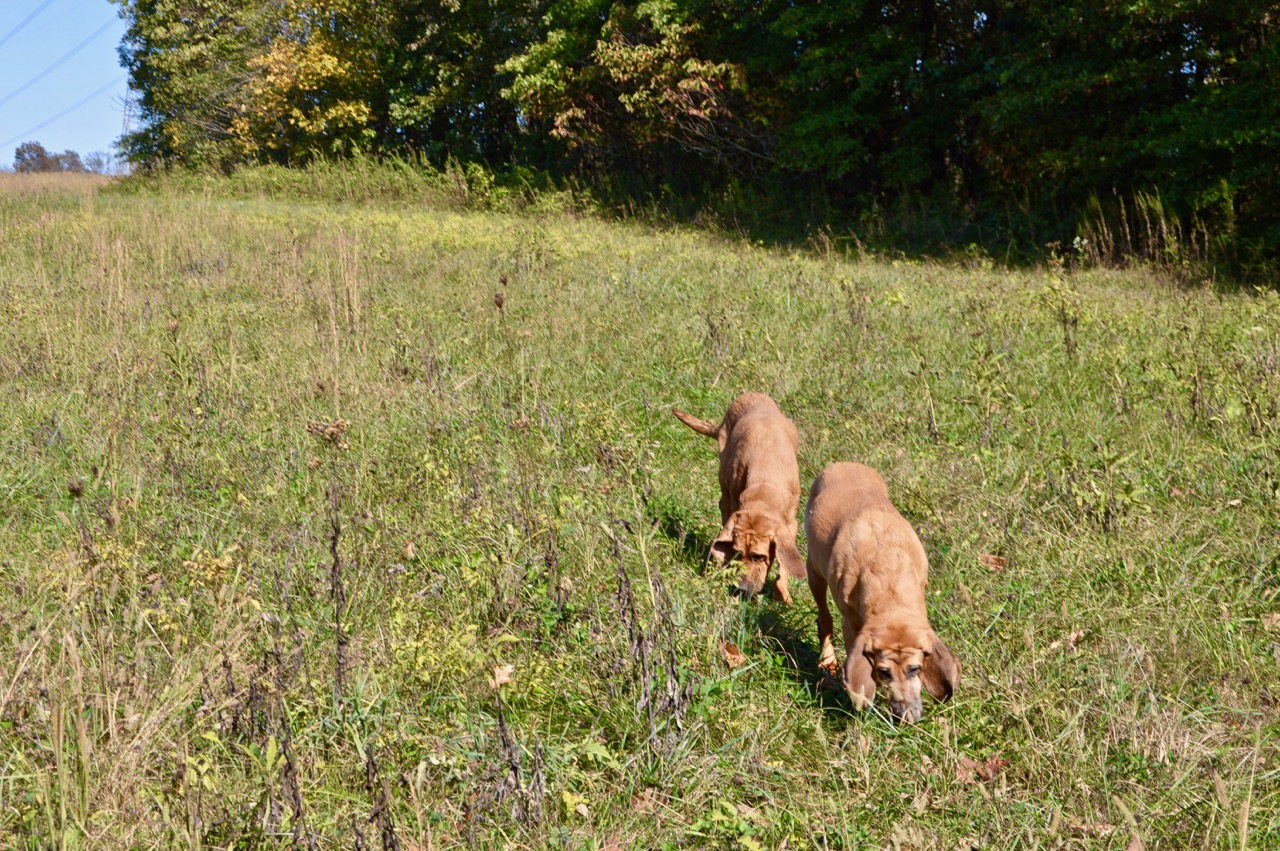 While I talked to the neighbor from my driveway ... Sadie stood and watched the large fire he had going. She was just waiting for me to give her permission to get a closer look ... that never happened. 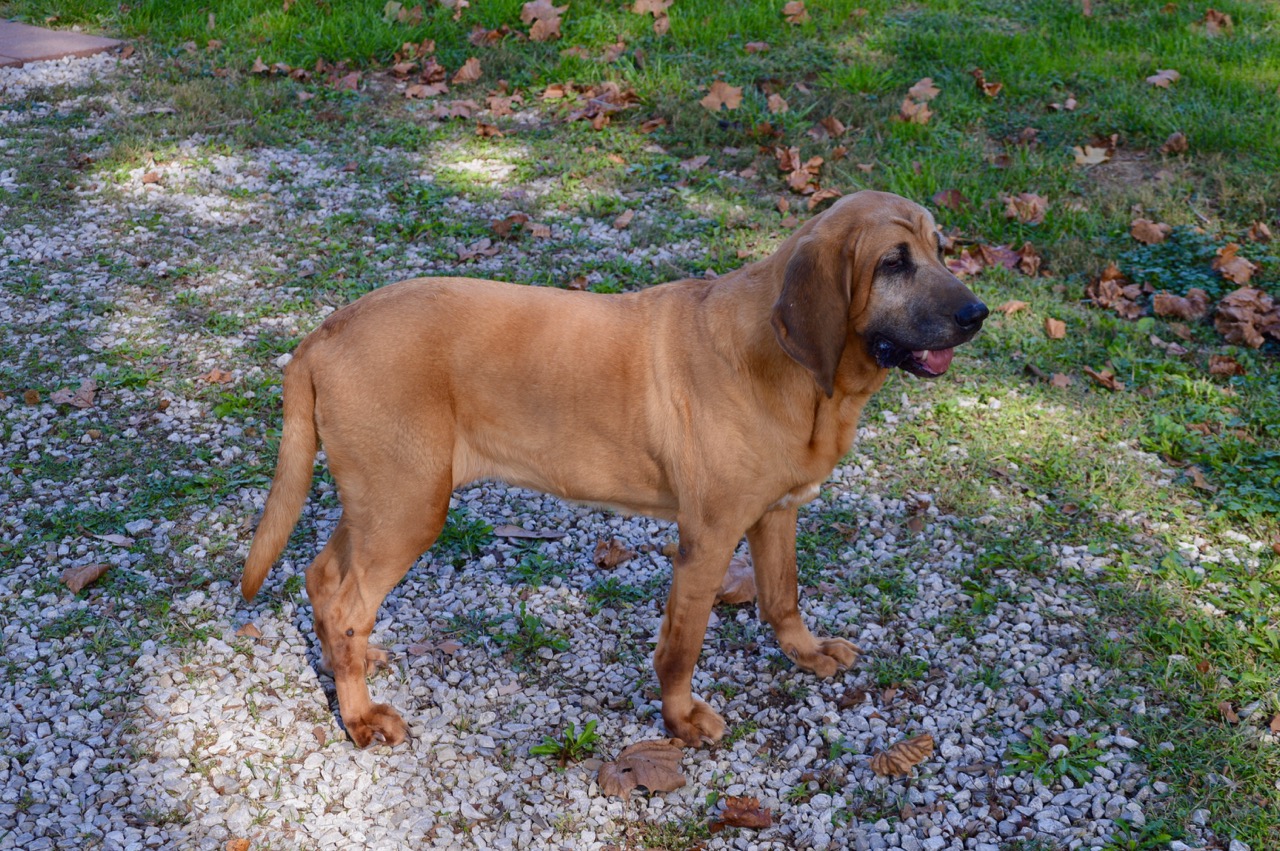 I glanced out into the field at Stella and she was in that pose that shows she is looking to see what I am doing and if she can get away for more exploration. I've seen that pose too many times not to think otherwise ... I knew she was going to head north if she thought I wasn't paying attention. 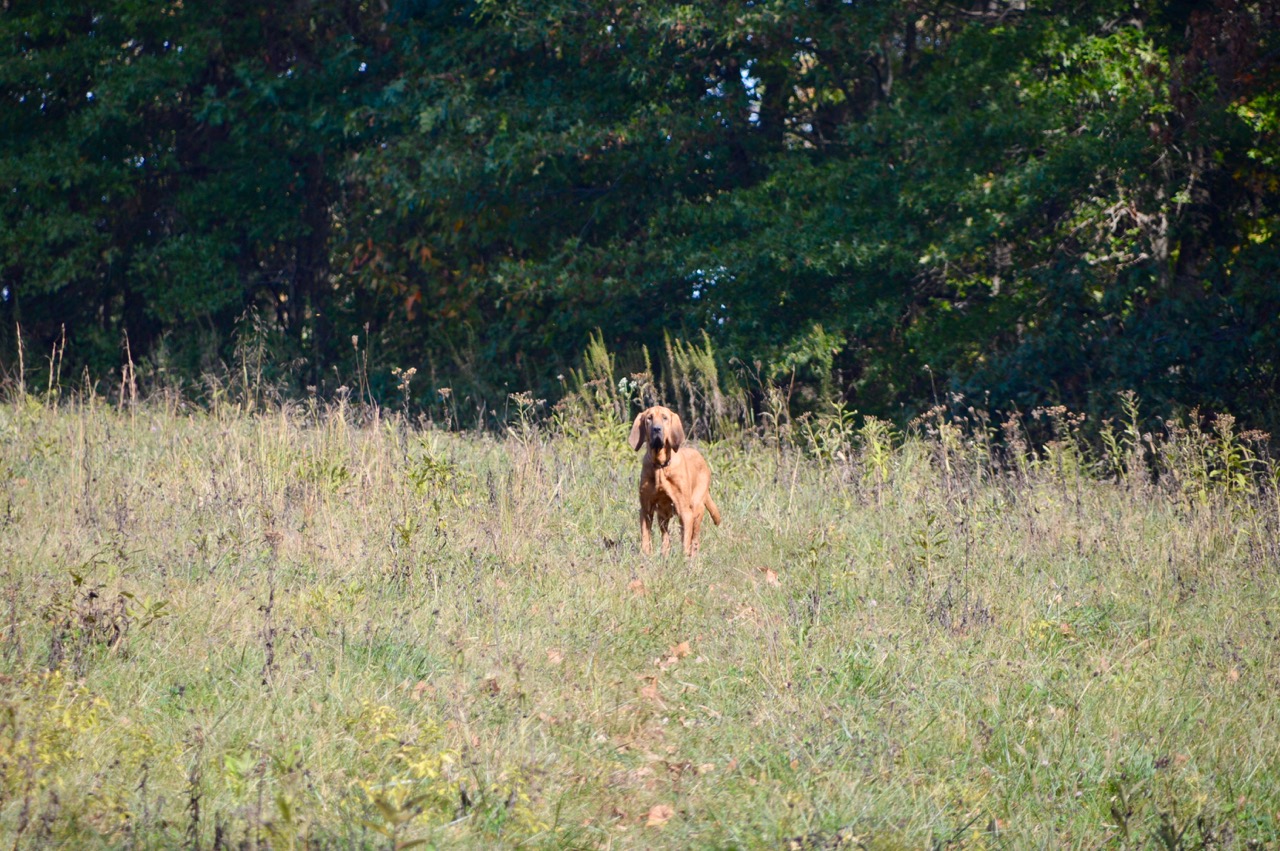 She did ... slowly ... as if she was quiet I would not see her nor hear her as she walked away from the house toward the woods behind the other neighbors house. 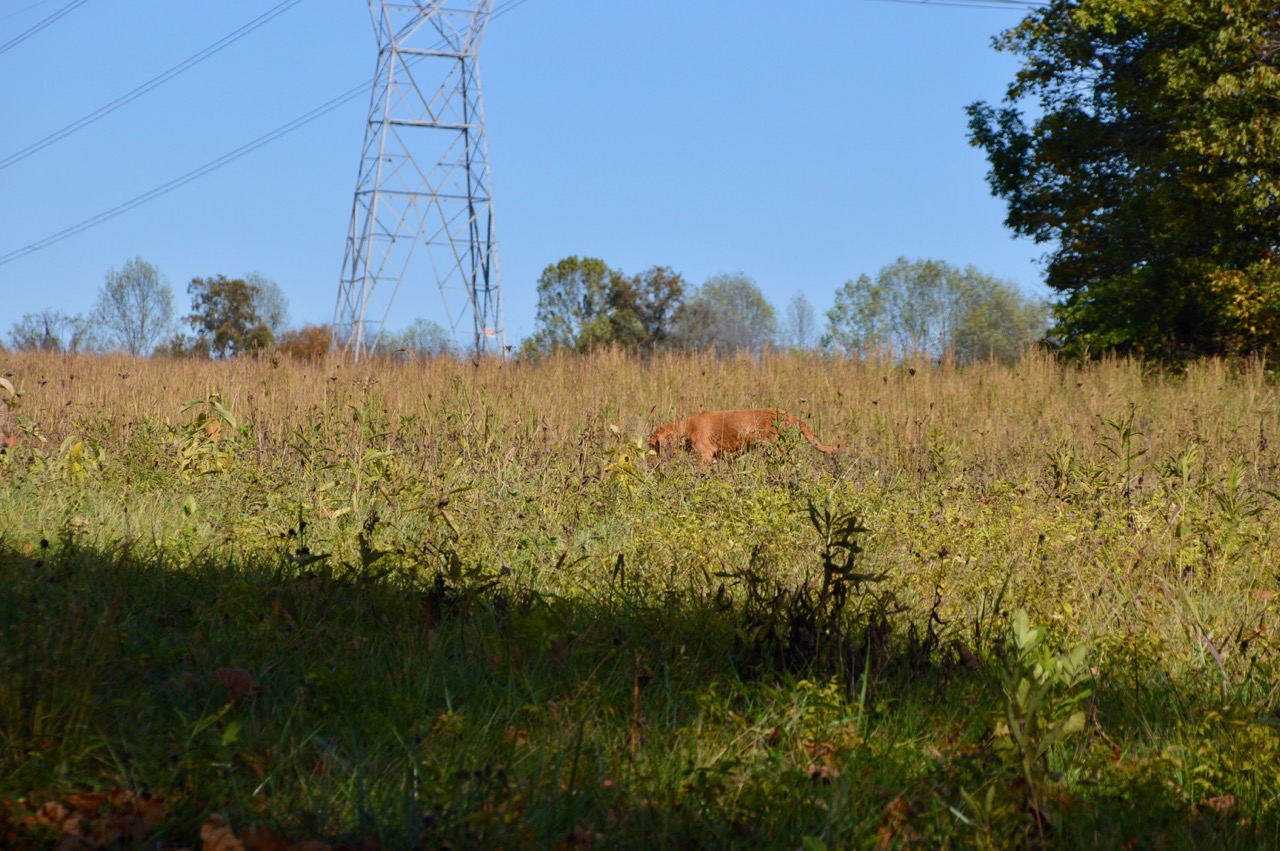 She did not know I was watching her through my camera lens while walking toward the north edge of the yard. I wanted to see how far she would go before I called her name. 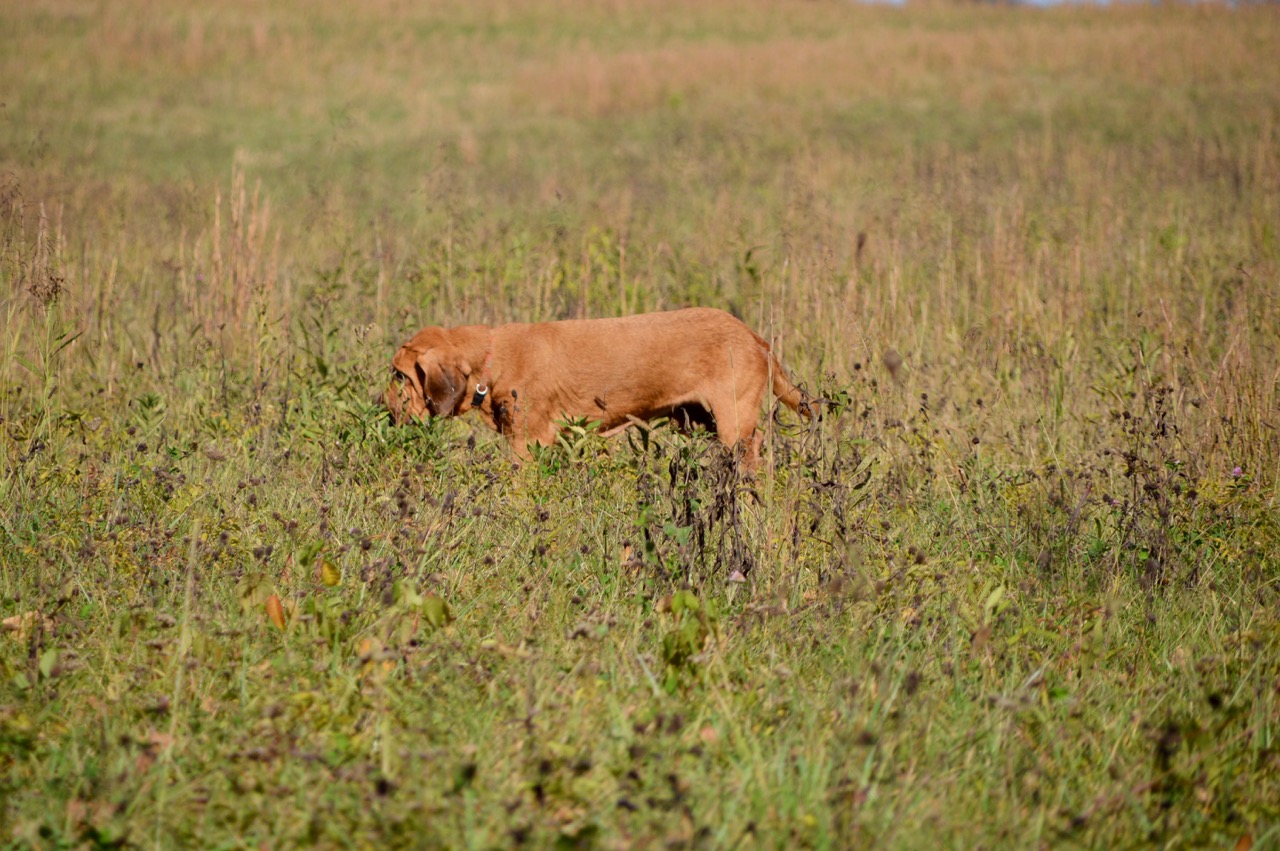 Once she heard her name being called she knew she was caught ... again ... an slowly walked toward the yard. Another gallant attempt to escape had failed ... but she never stops trying. 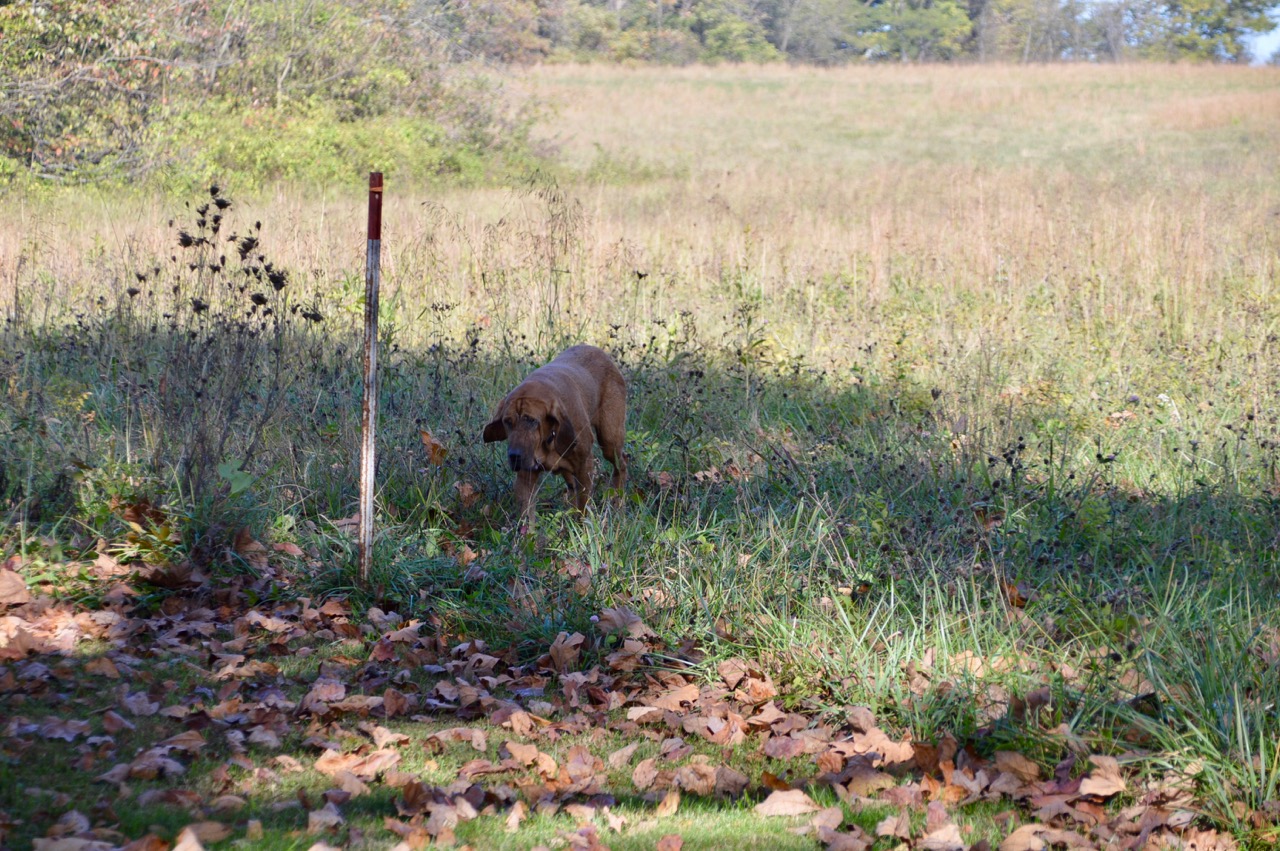 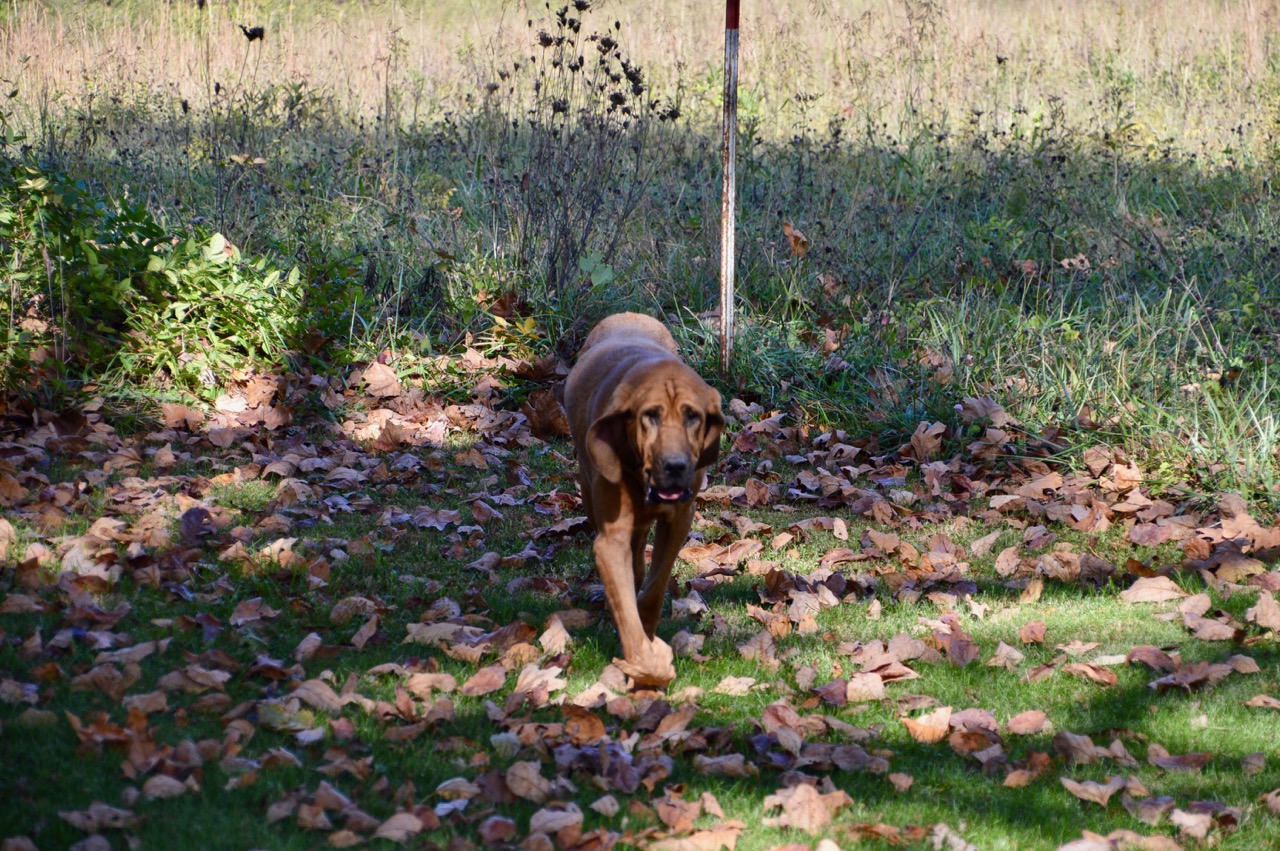 With the first baseball game on tv at 5pm I seriously considered an hour siesta before it started. It's too nice outside to take a short siesta but with three hounds sound asleep and one of them snoring, it's hard to stay awake sometimes.

I was reminded today why I stopped using Google Chrome as my browser and moved to an improved Safari after Apples macOS update. I had been helping a friend with some computer issues on her new iMac and Laptop when she asked if I used Chrome or Safari, since she might have to move from Firefox.

From that discussion I decided to use Chrome for a day to see if I could save some data. In the past, on average I'd save 10% data usage in a 30 day period. That doesn't sound like much but that 10% savings would give me an extra 2Gb in 30 days.

What I forgot happened today ... with all automatic updates turned off, all video autoplay disabled, adblocker app on ... before I could shut down Google Chrome I "something" running in the background used 600Mb of data in a matter of a minute. I was lucky to glance at my Activity Monitor just in time to turn off Google Chrome.

I've never liked Safari's all-gray Favorites Bar and the different tabs with open websites. The color icons of websites open on different tabs look much better on Firefox and Chrome. I find that Firefox is a pure 'data hog' ... and Chrome always has an unexpected data surge of some kind even with your computer locked down as tight as possible.

So I've moved back to Safari with all of those features built in, website loading speed just as fast if not faster as Chrome and advertising companies not following every step I take on the internet.

Other than that data surge ... it's been a really nice day here in 'the tropics' of Southern Indiana today.
at October 18, 2017