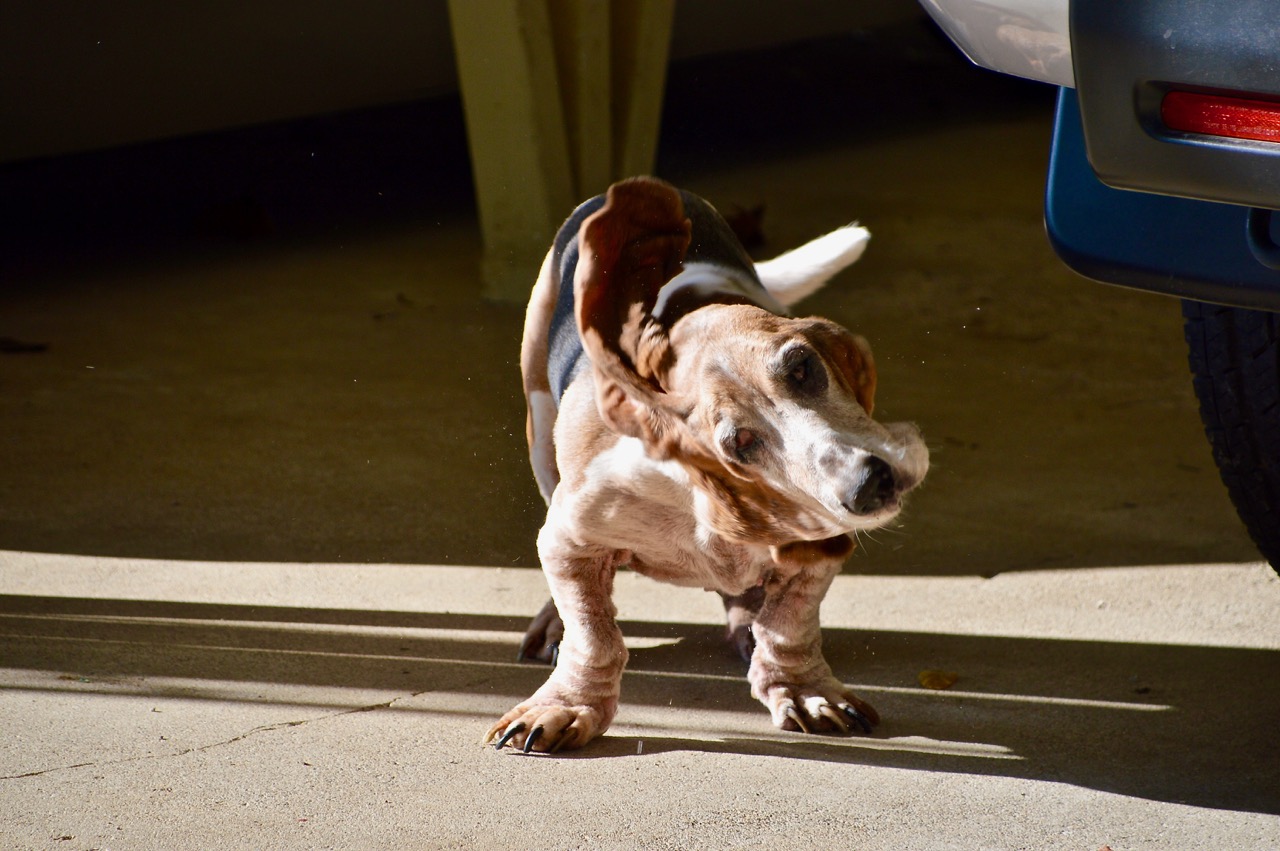 Heidi refused after lunch to go outside which is normal procedure anytime the hounds have a meal. The rain was light at that time but she knew what she was doing. She jumped off the couch around 5pm when I announced to her that Sadie, Stella and I were going for a walk ... the sun was out.
I knew the field would still be wet but that didn't matter ... rain clouds had blown out and the sky was clear and blue ... we were off. 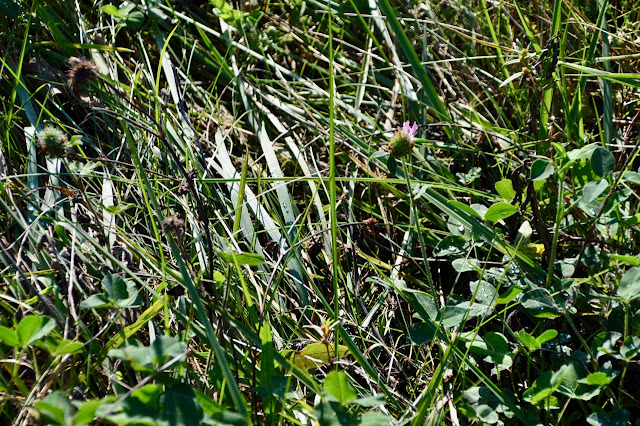 As you can see I've been a little lax on my landscaping lately ... three is always another day and the weeds will pull out easier tomorrow morning after today's rain. 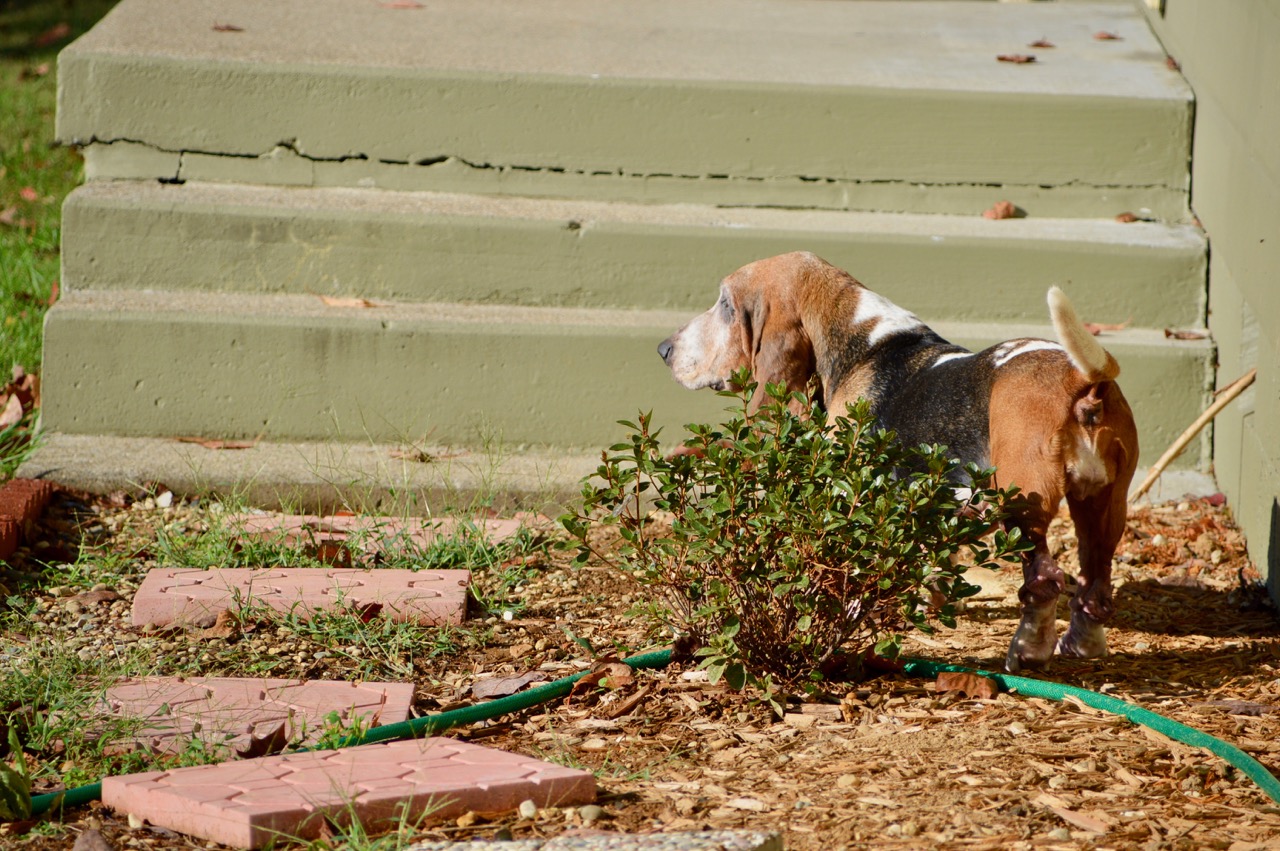 Stella snuck over to her new spot to pee ... north side of the yard and down over the bank from my position in the field. You can barely see her head in the middle of the picture. 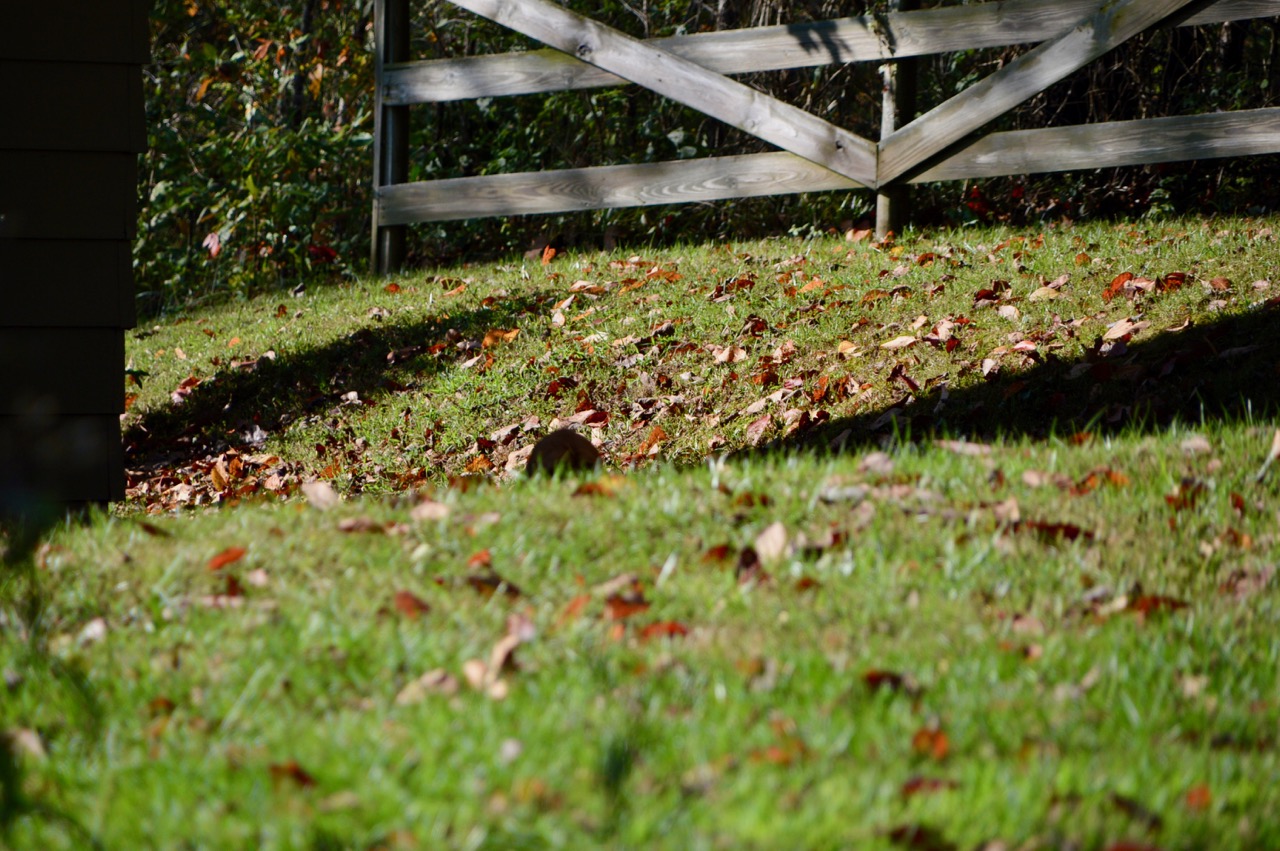 She tried to escape with her solo walk by taking the north but stopped when I yelled her name and said 'over here'. She stood and thought about what I was saying to her, almost turned north but then just as abruptly turned around and head our direction. She had new plans ... to lead the walk ... get out in front of us ... and do her own thing. 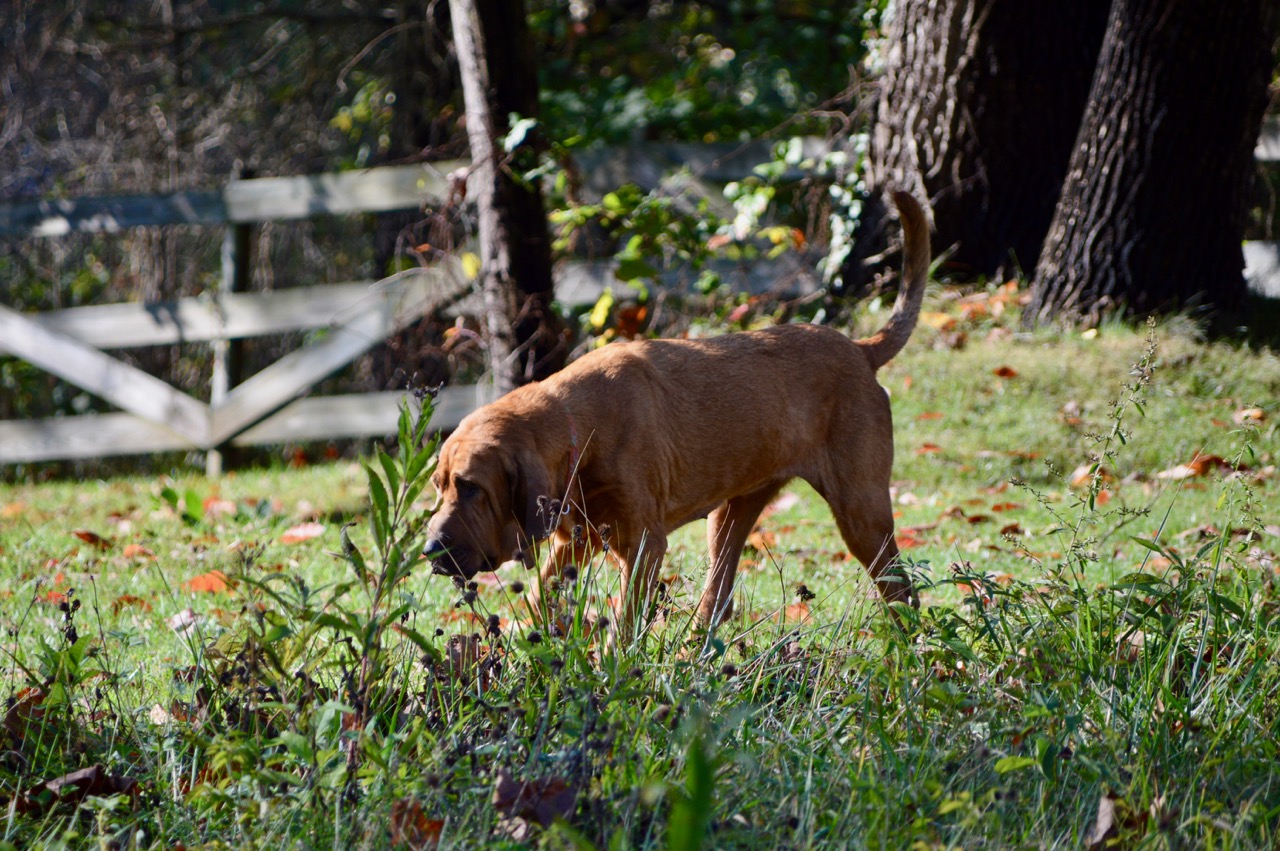 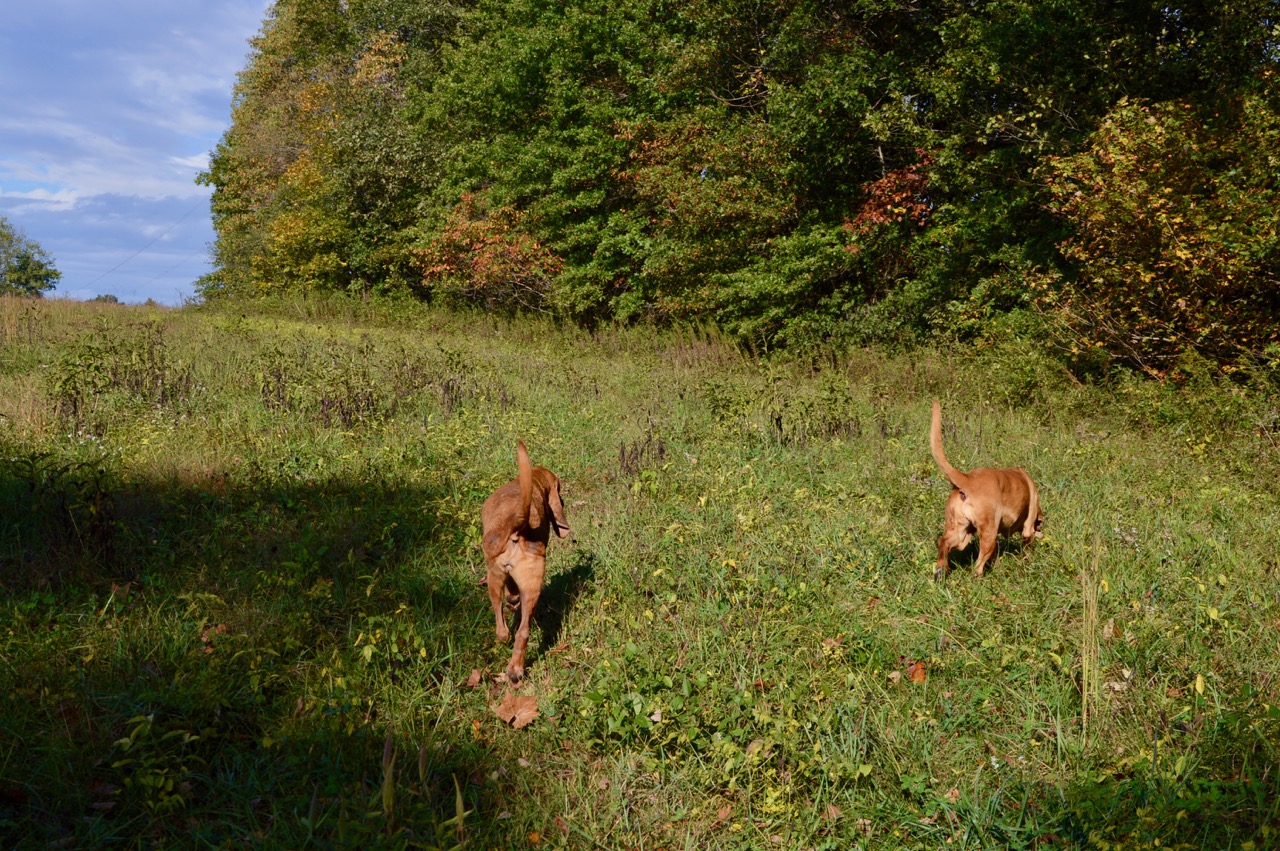 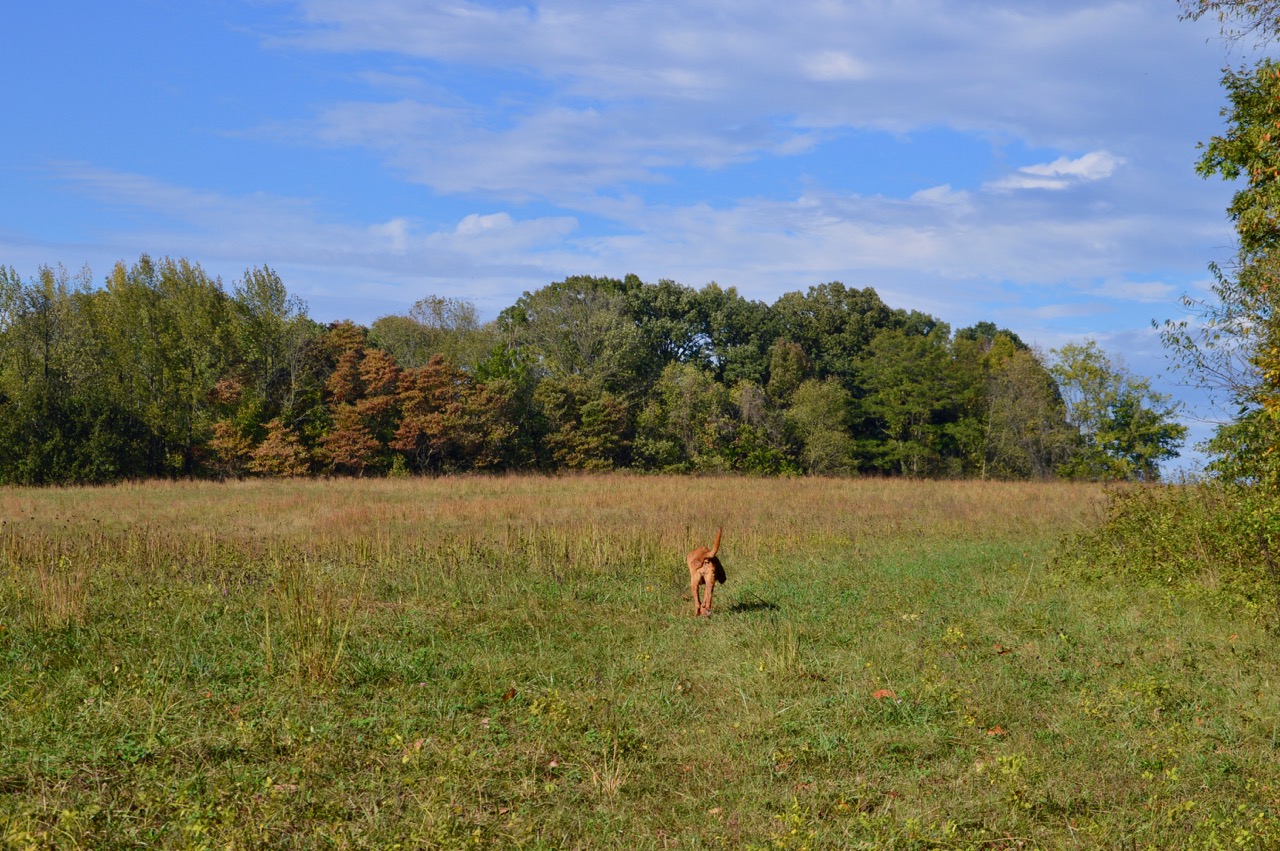 It was only when she smelled some deer scent that she stopped and checked out one of their entry/exit points to the woods. I heard nothing running but she evidently smelled and heard something pretty strong. 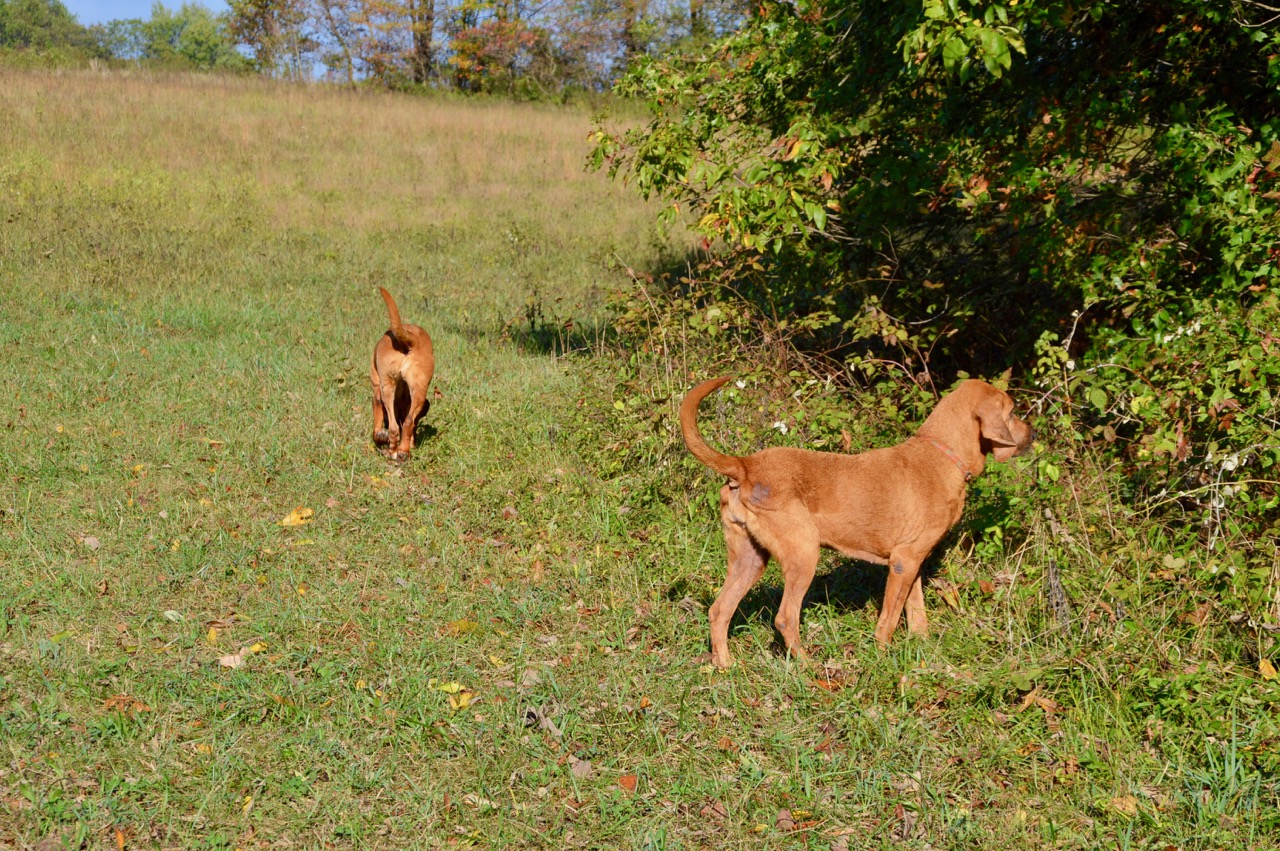 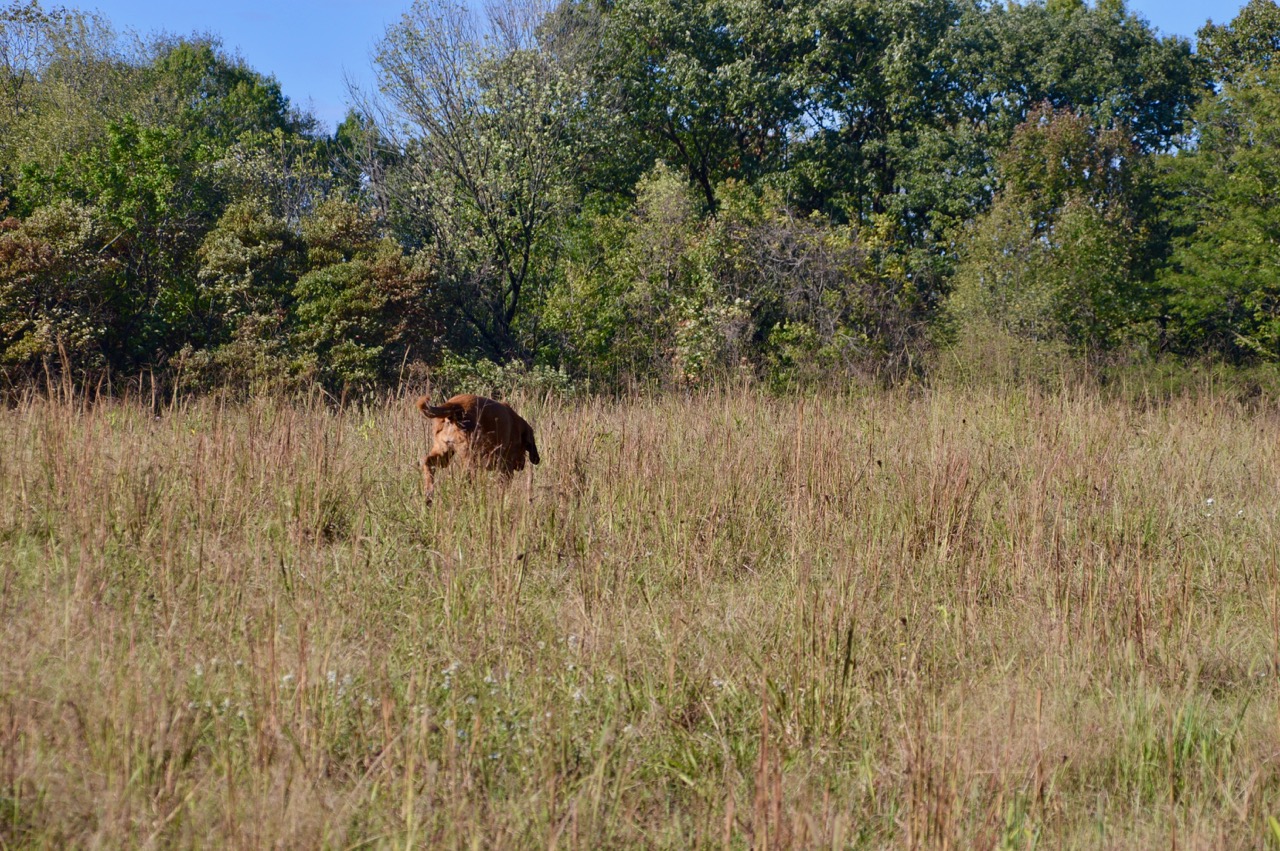 I yelled "over here" and once again she turned to join Sadie and I ... that is really strange, her obeying  voice commands. 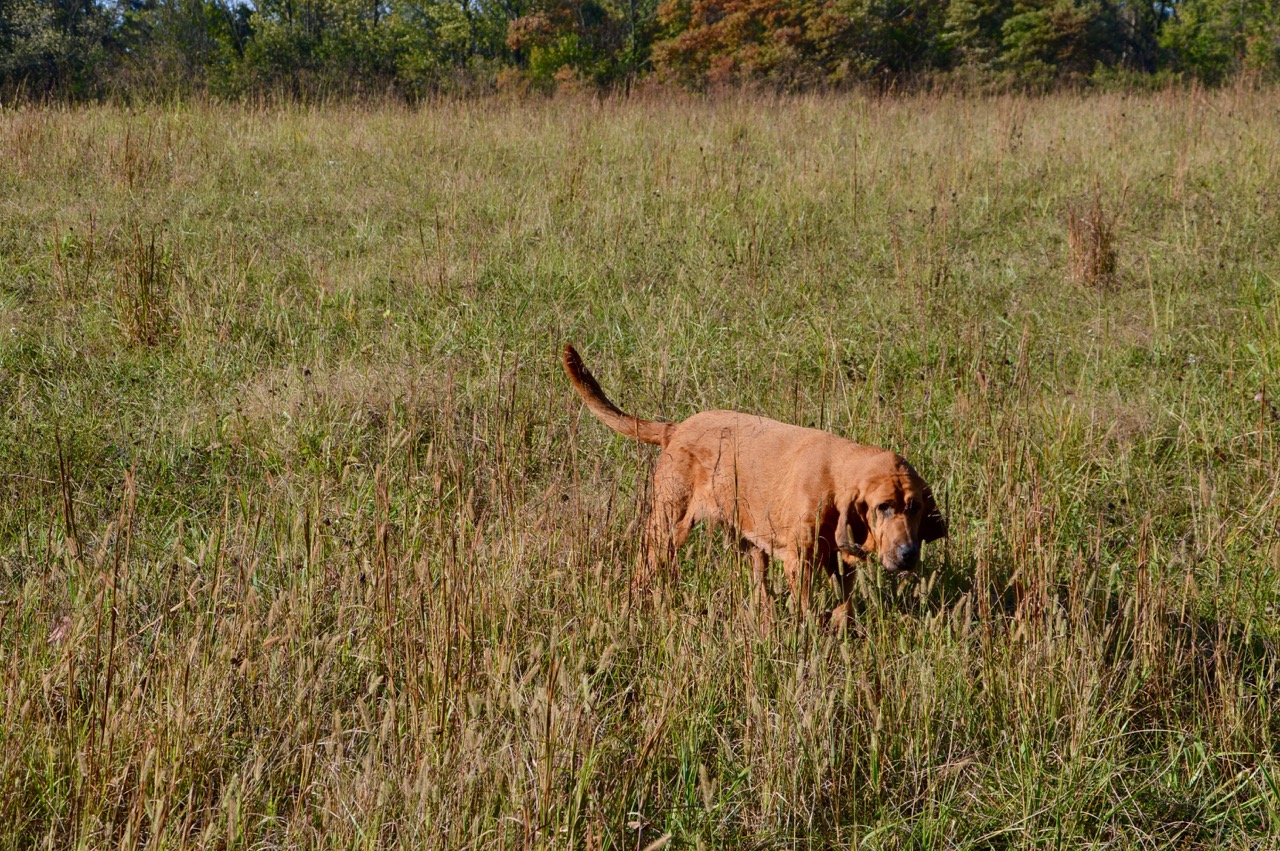 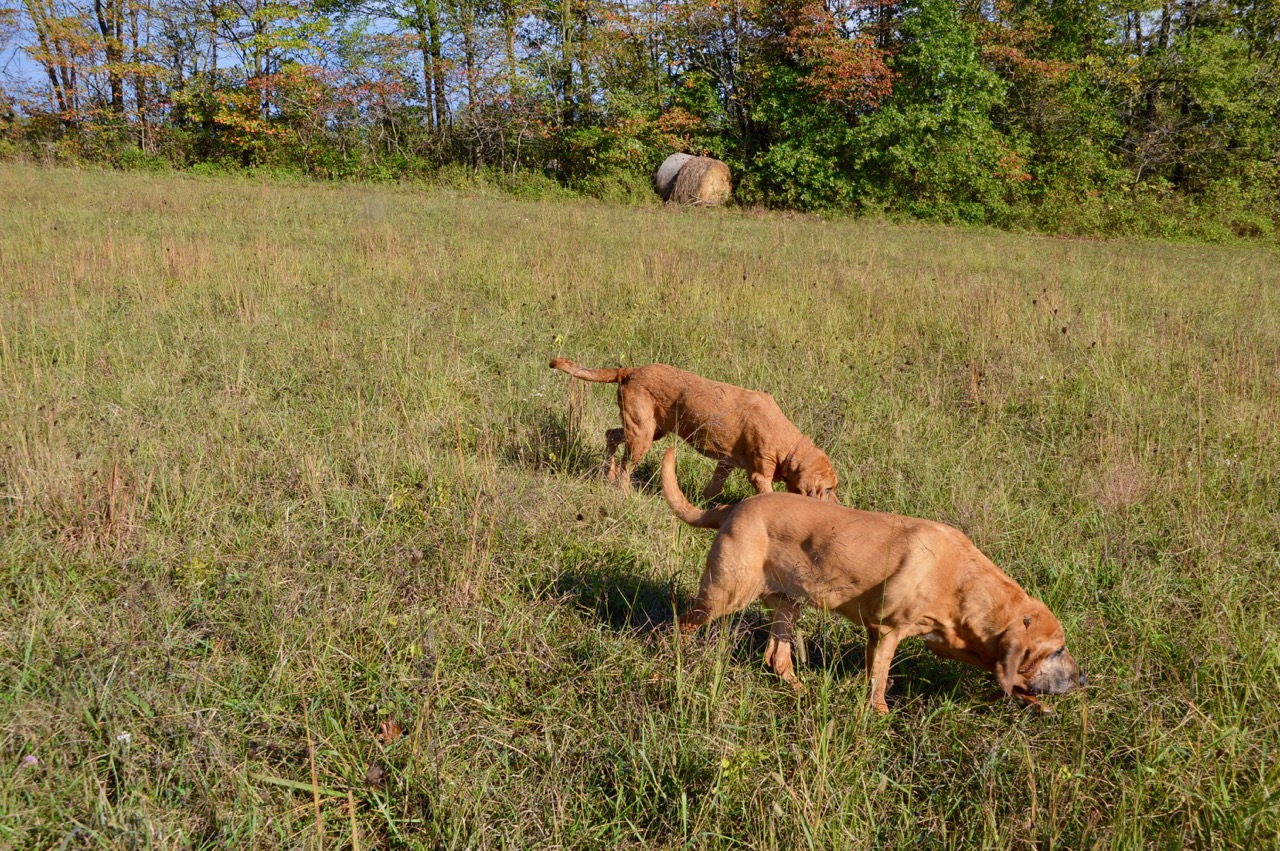 She fell back into her afternoon walking stroll ... laidback, relaxed, no cares in the world. 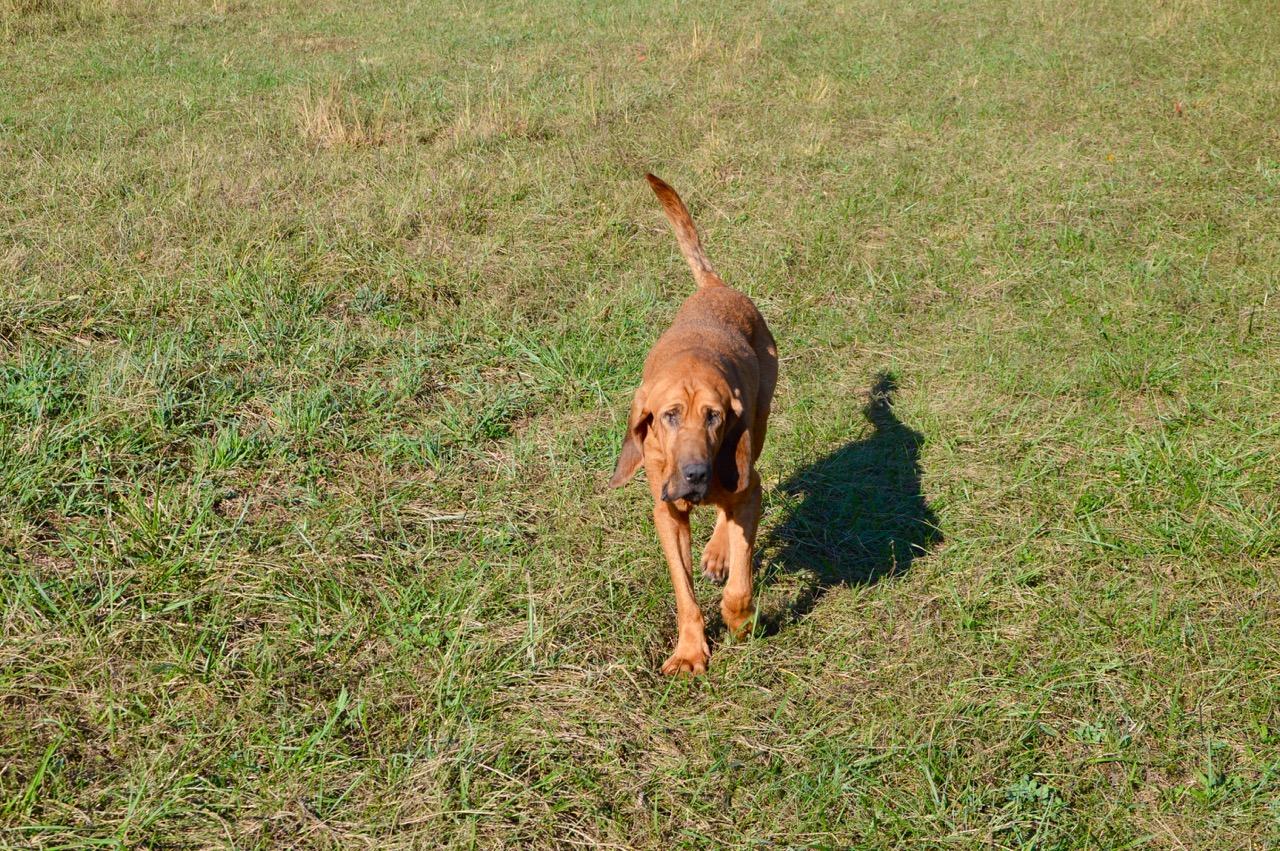 I took this picture on purpose into the sun, with a lens hood attached just to see the bright blue sky and bright sunshine after a full day of rain. 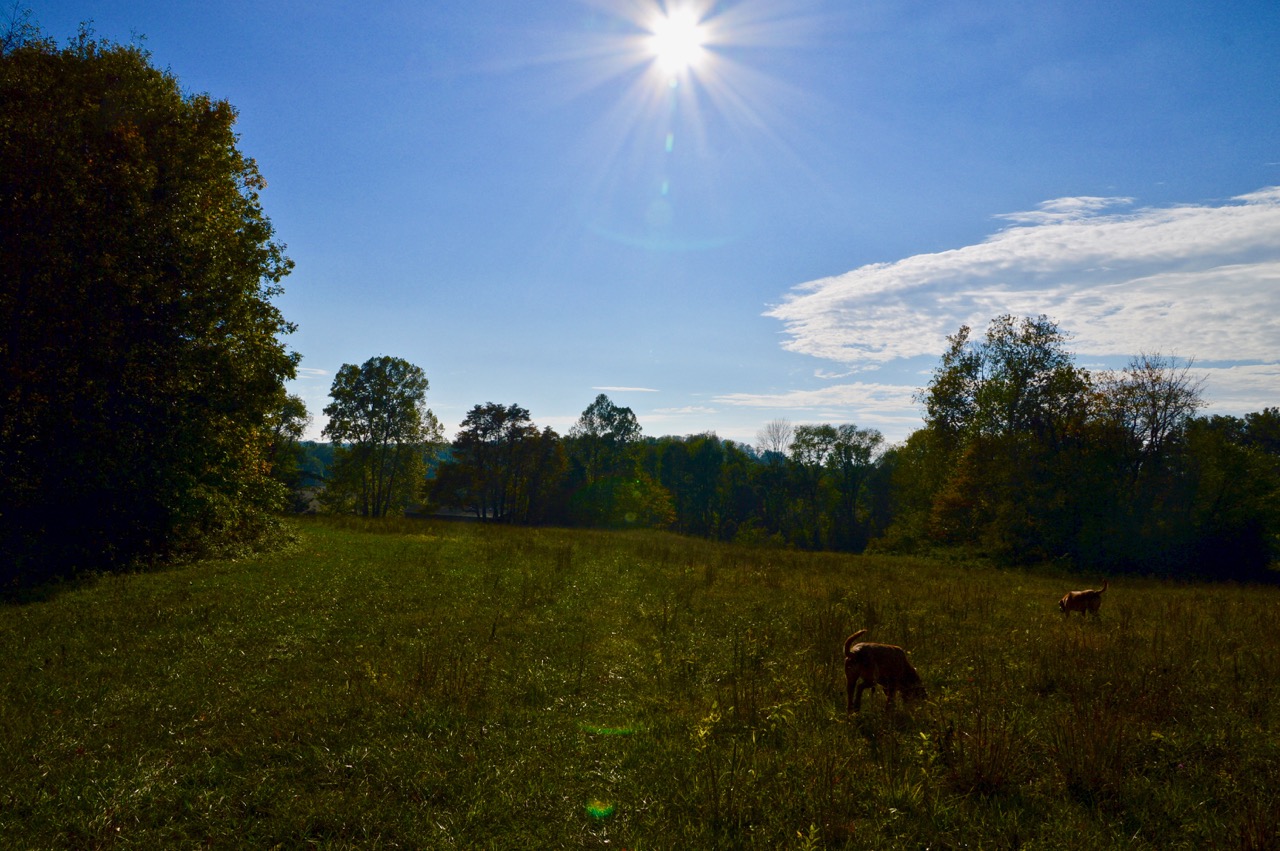 As the two bloodhounds and I walked into the yard from our northern path ... Heidi was waiting for us. She might look sad in that picture but she was wagging her tail and the camera just caught it in stop action. 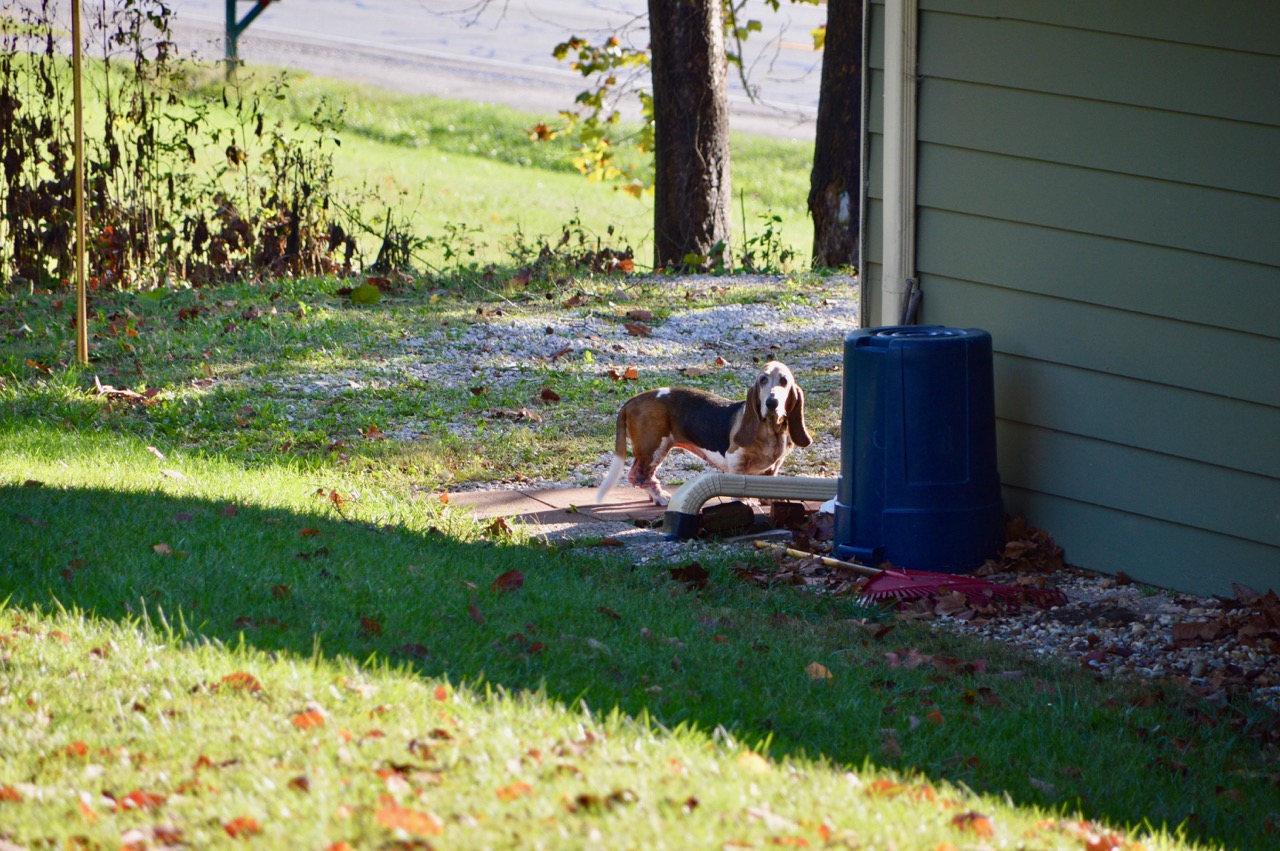 She was happy for us to be back ... get back on the couch and prepare for more televised baseball games. 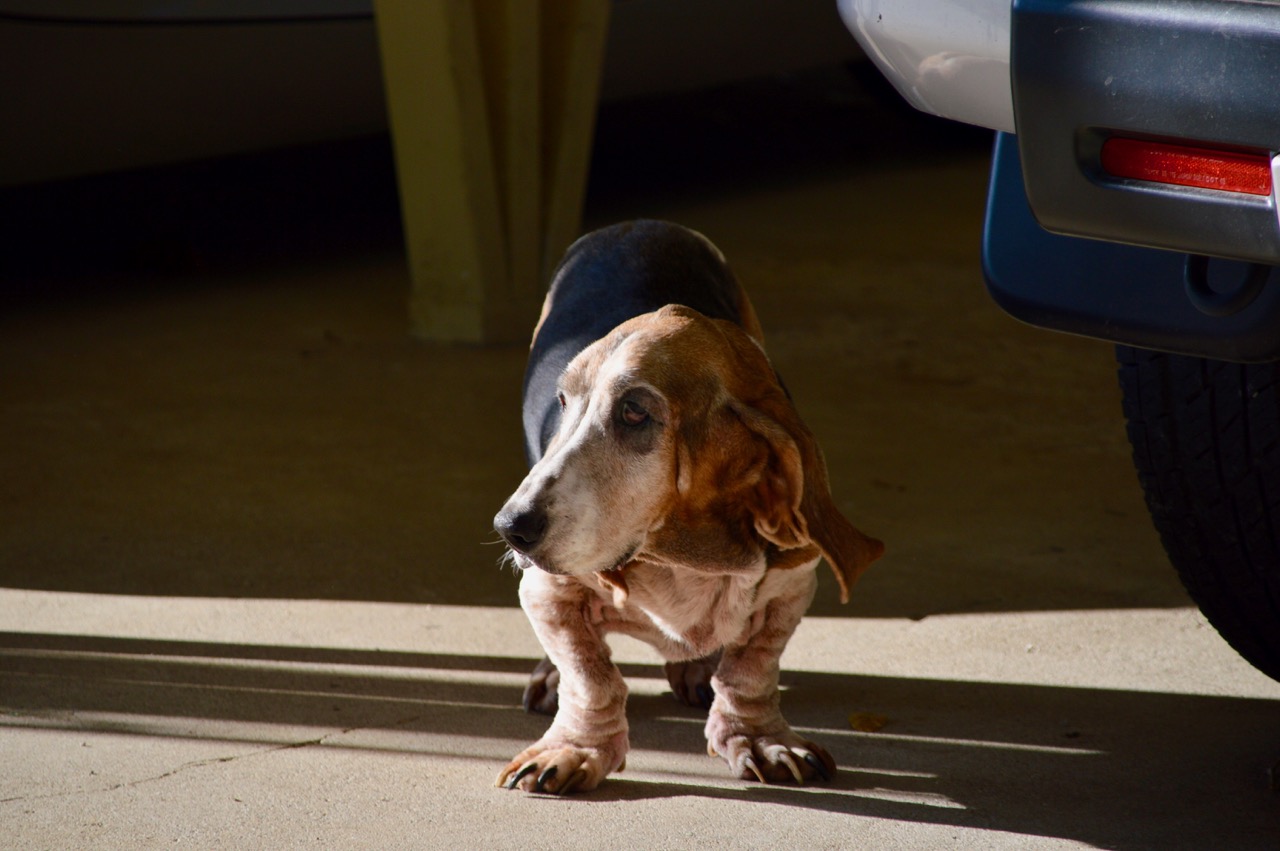 When I restarted the blog on Sunday I had a huge gap between posts (Aug 3 - Oct 8). I had the previous posts from the deleted wordpress blog on my master copy plus any posts during that time I made of the hounds .. so yesterday I dug through the files and posted as many as I could find onto this blog ... so the archive on the sidebar shows more posts in August and September filling in that gap.

You have already read most if not all of those posts because they came from the Wordpress blog.

Well there's a rain delay in Chicago but sunny here ... I'm going outside to enjoy the rest of the day ... maybe even pull some weeds.

The sunshine is back in 'the tropics' of Southern Indiana.
at October 10, 2017