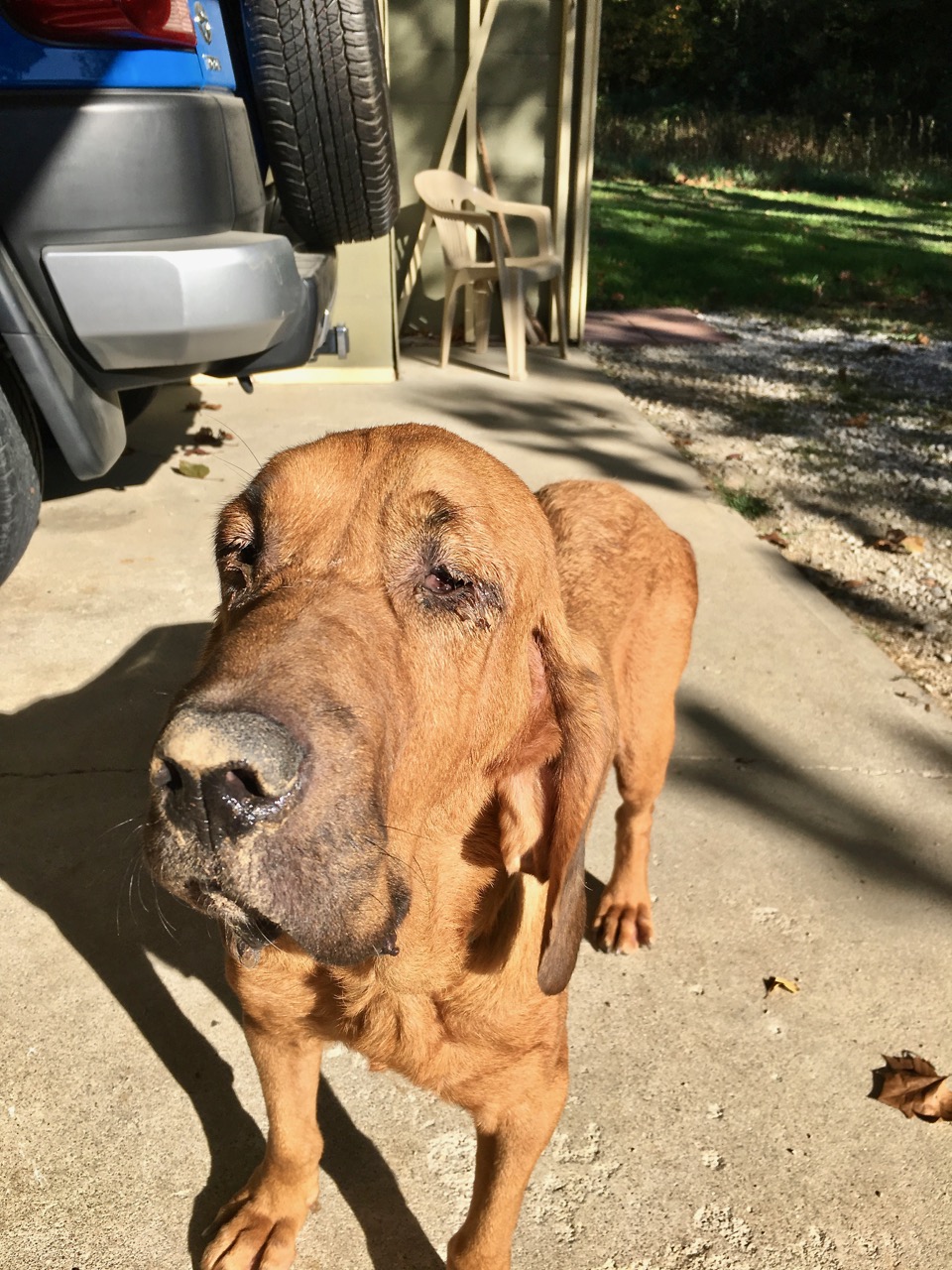 Not only did Stella cast her vote but so did Sadie and Heidi ... although there was no eating of dirt prior to voting for them. Soon after lunch all three hounds hung out around the FJ discussing how then were going to tell me that 'they' run this blog, that I am only the typist and photographer. It kind of reminded me of my working days were people hung out in the coffee lounge discussing various things.
Instead of writing out a long detailed description of what went on during our board meeting, I'll just say here was the final decision, unanimously voting 3-0, where I was not allowed to place a vote nor voice my opinion. I was only there to take notes and then later have those meeting notes approved by Stella before posting. She insisted her photo be the 'feature' of the blog. 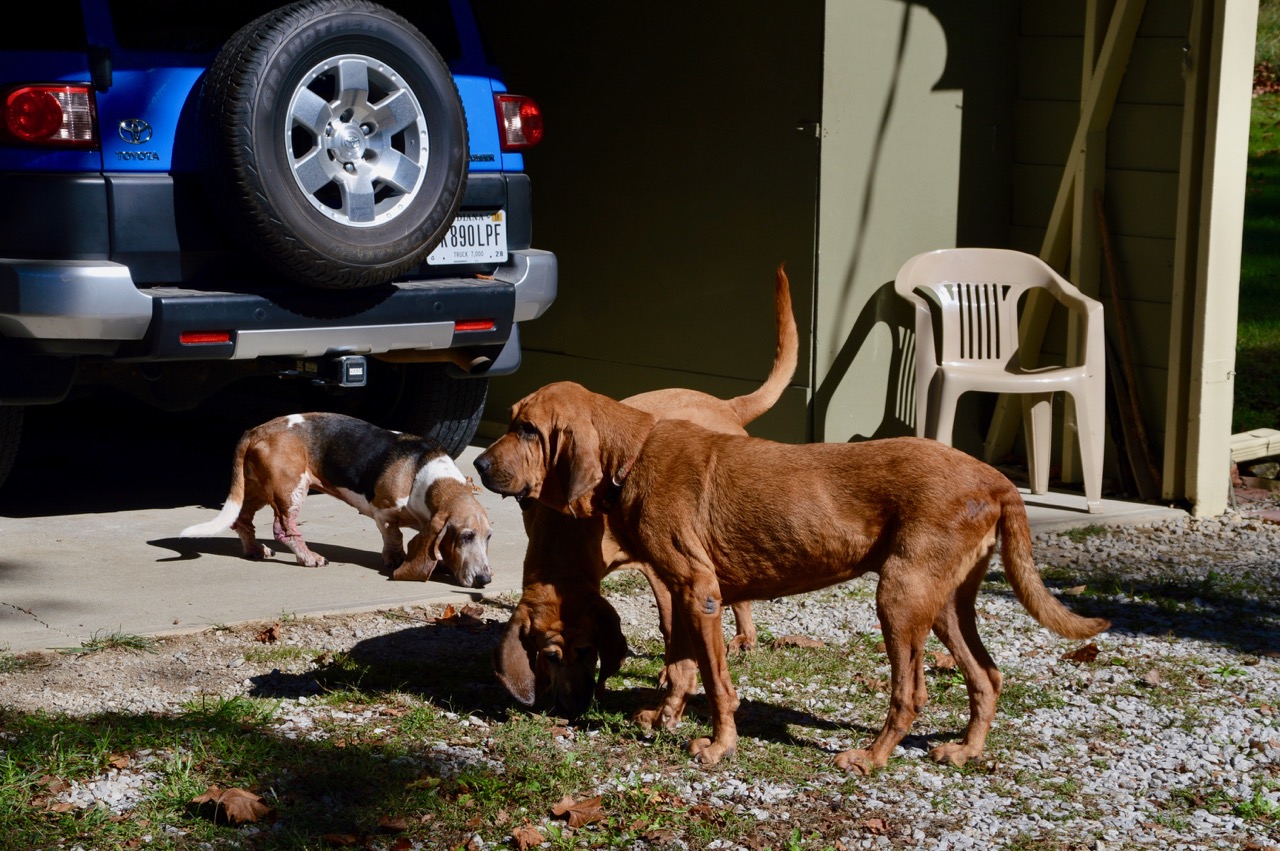 The discussion was short and sweet -- nothing changes from what has taken place the past 6 years. We will continue to ramble, rant a little at times, keep away from current events in the world and USA, keep away from religion and political discussion nor turn the blog into "talk radio". Cussing will be at a minimum if any at all. Posts will be published when we feel like it as well as composing the post. Photos of the hounds will be taken from all angles and all sides ... chances are the hounds will not wait for me to get in front of them just to take pictures from the front. 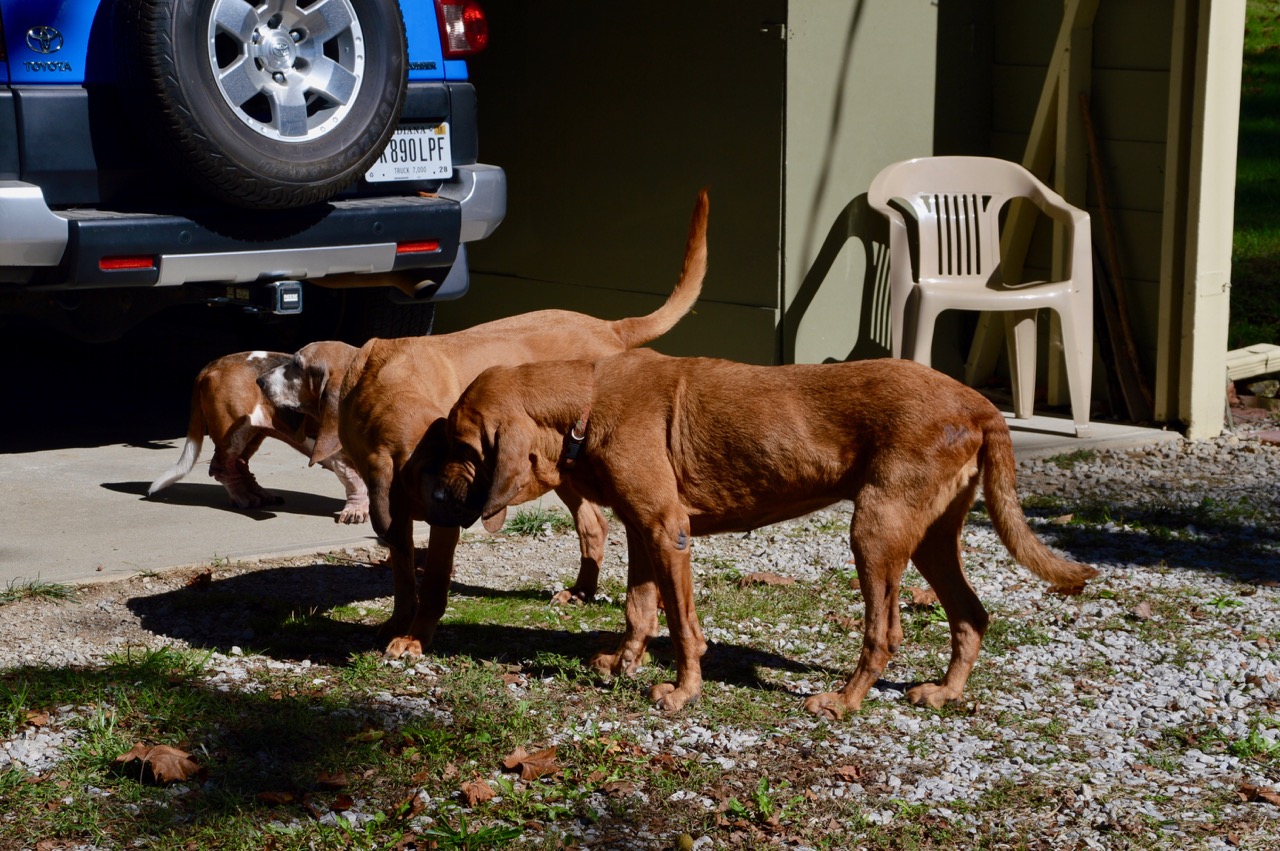 They tried it a couple of years ago but found it was too much work, therefore at no time in the future will each hound have their own blog and written from their point of view. GoPro cameras are under consideration but will be discussed in their next meeting ... currently all the hounds want their own cameras and mounted all at the same time ... "one for all or all for none" ??? is that how that goes?
After all, all three of them get dog treats, pieces of pizza crust and sometimes plain pancakes or waffles at the same time ... not just one of them. So the same thing goes with the camera ... until they can come to their senses and see the logic of only buying one GoPro and sharing it ... just like blankets, bones and chew toys. 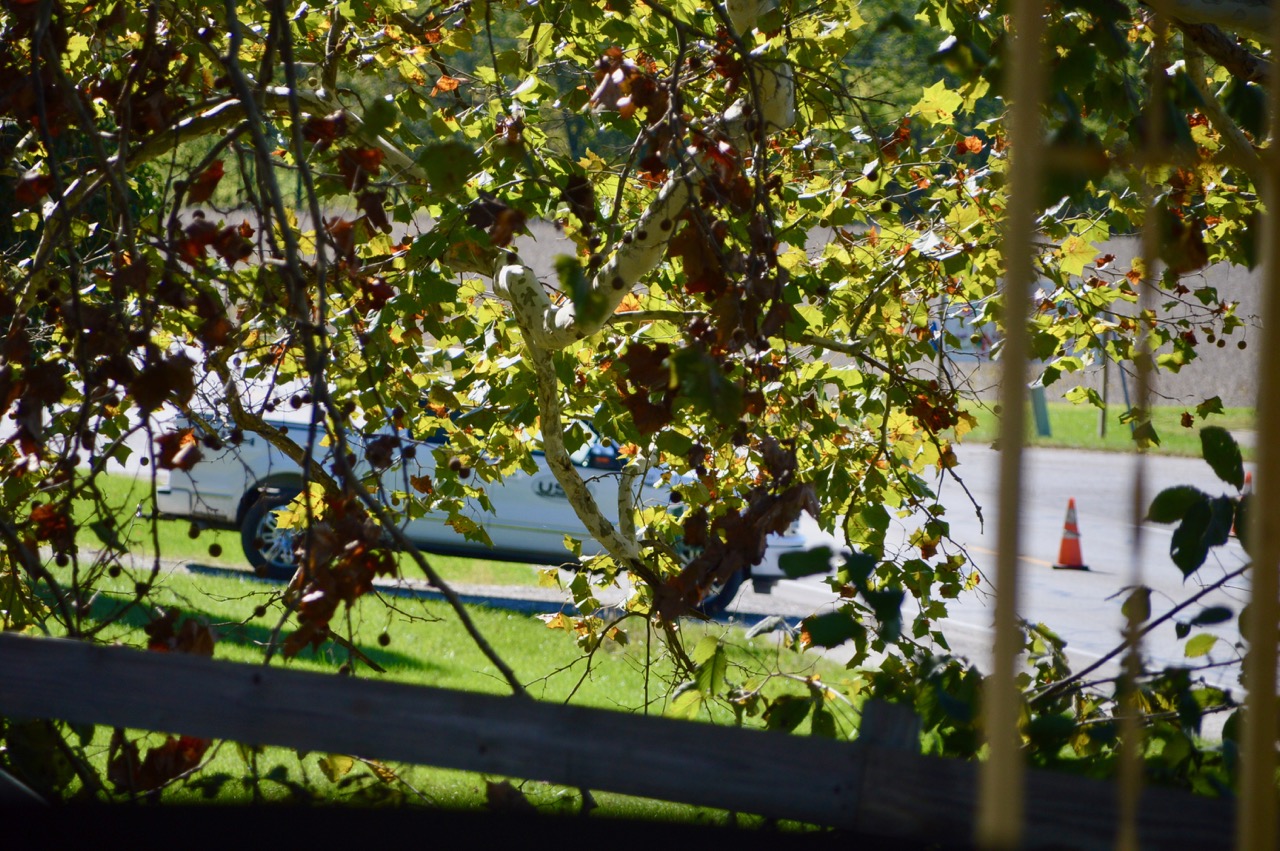 Earlier with the power out while they took down the older electrical system lines that crossed the highway ... I sat at the kitchen table playing one Mahjong game after another, with the Nikon D3200 sitting right next to me. 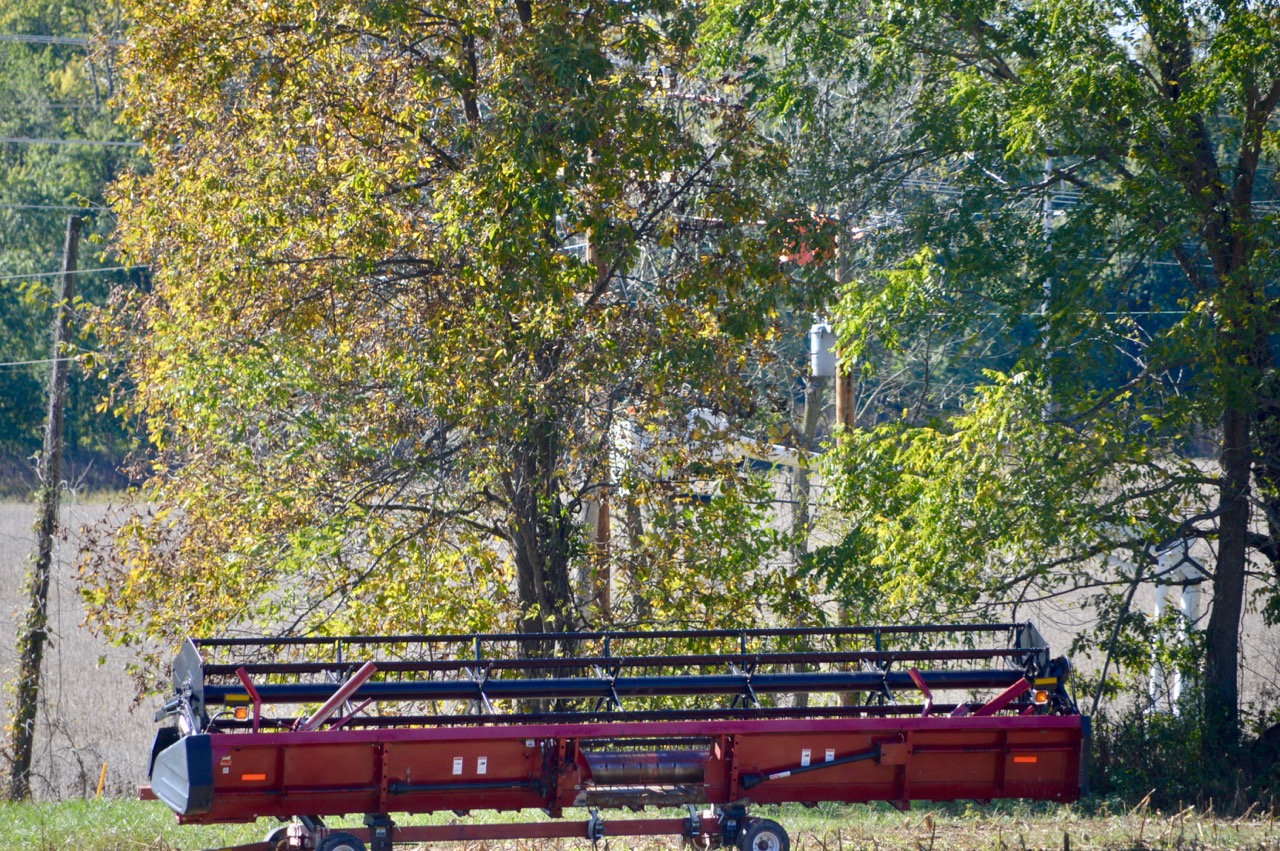 Sadie was very interested in the stopped traffic on the highway has they removed the older power lines from high across the highway. She has never chased a car but she was sitting at 'attention' looking out the door window and her nostrils moving in an attempt to see who was out there. 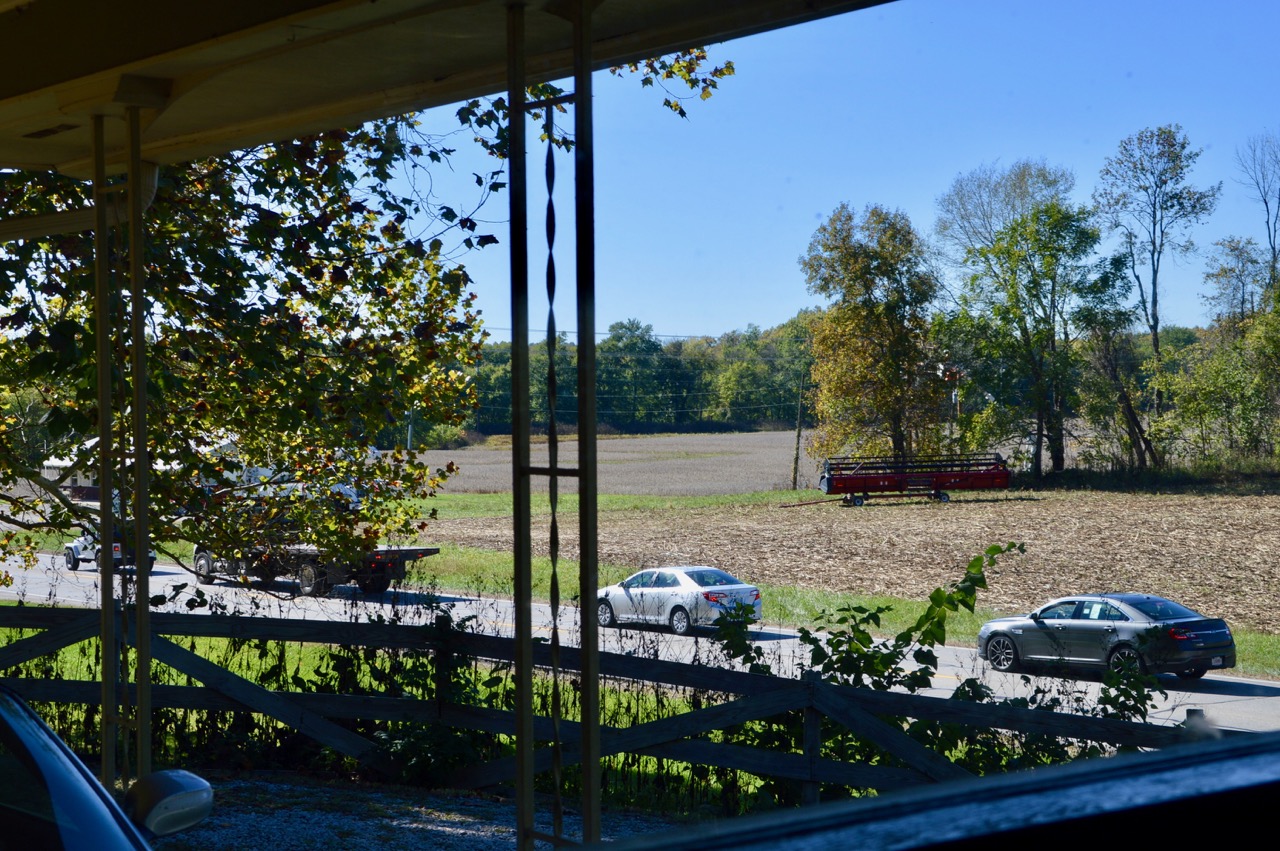 After the utility company trucks left and I knew their job was finished, it was a perfect time for their afternoon walk. Much better lighting for picture taking this time of day compared to the morning pictures. 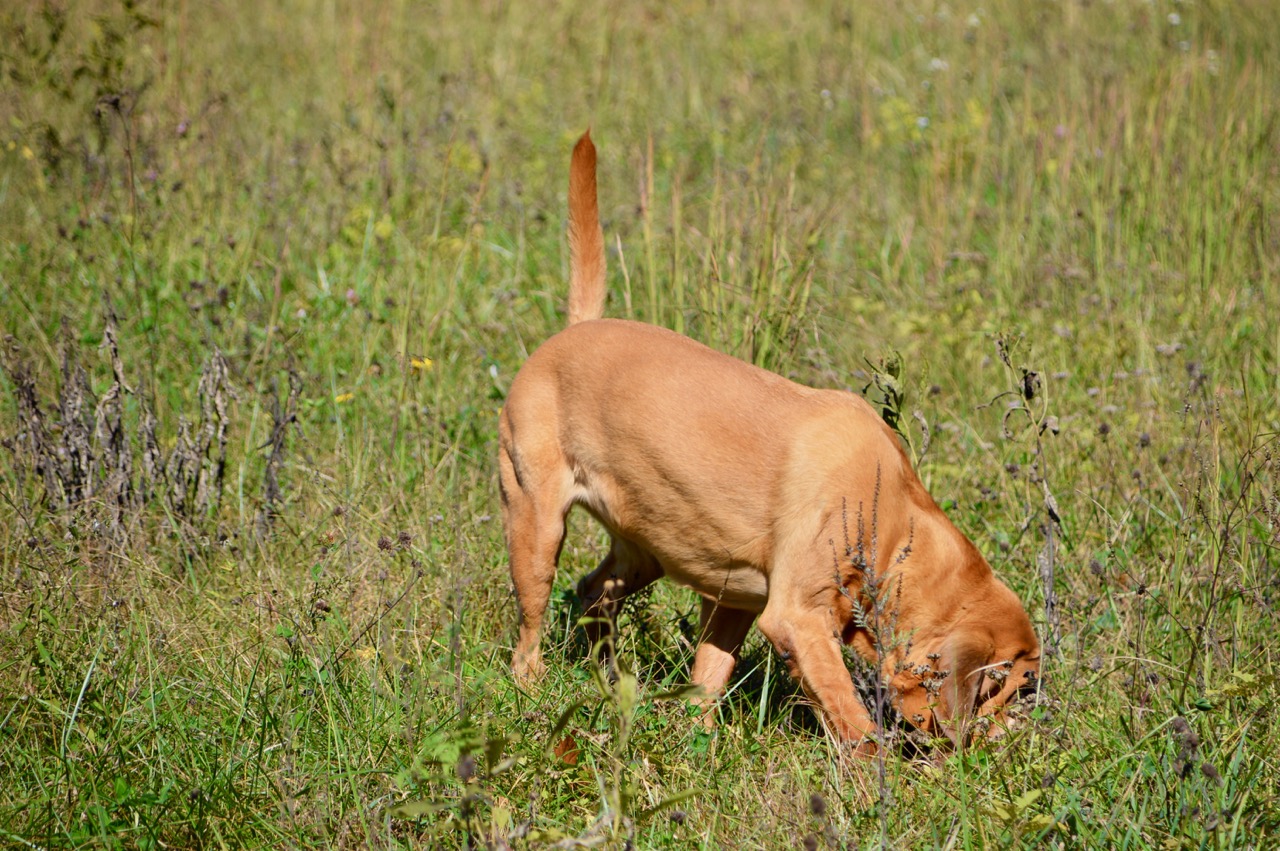 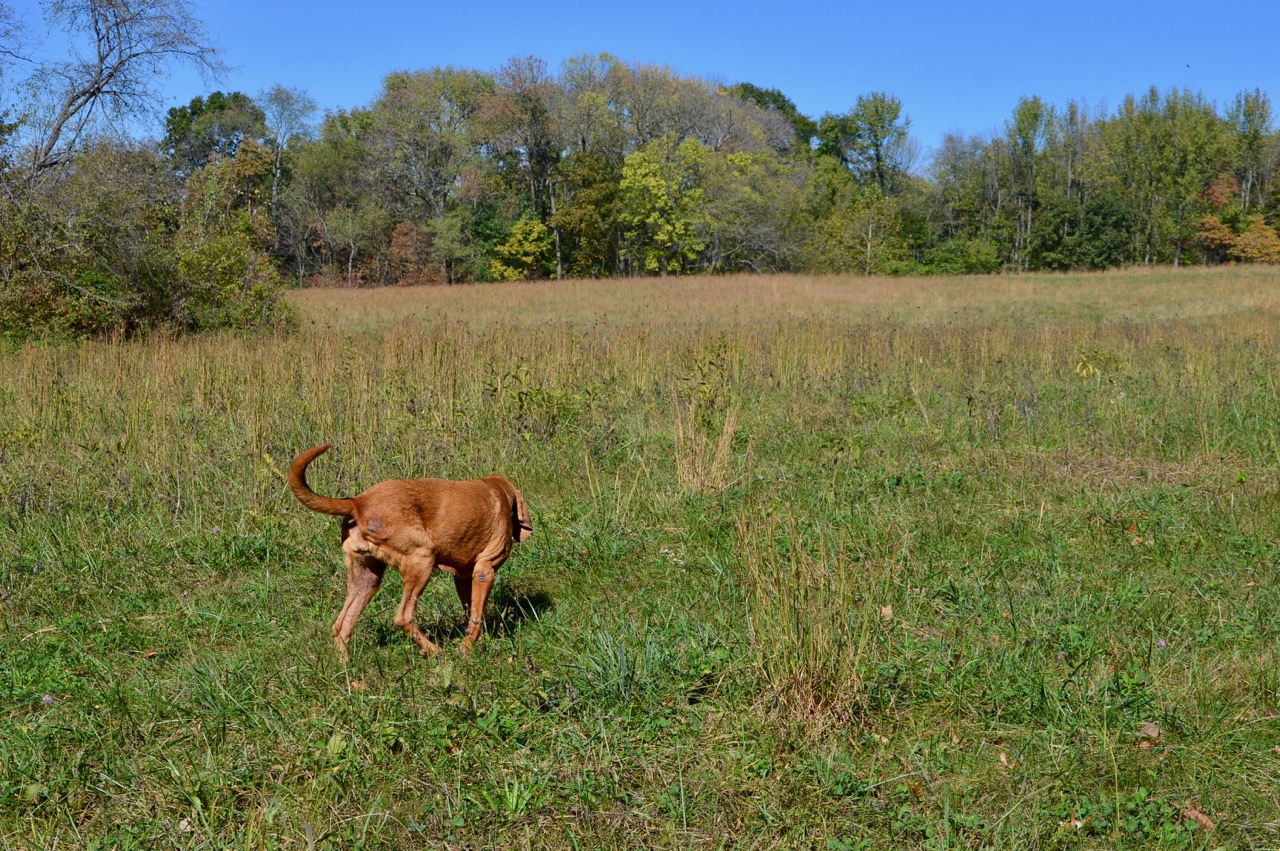 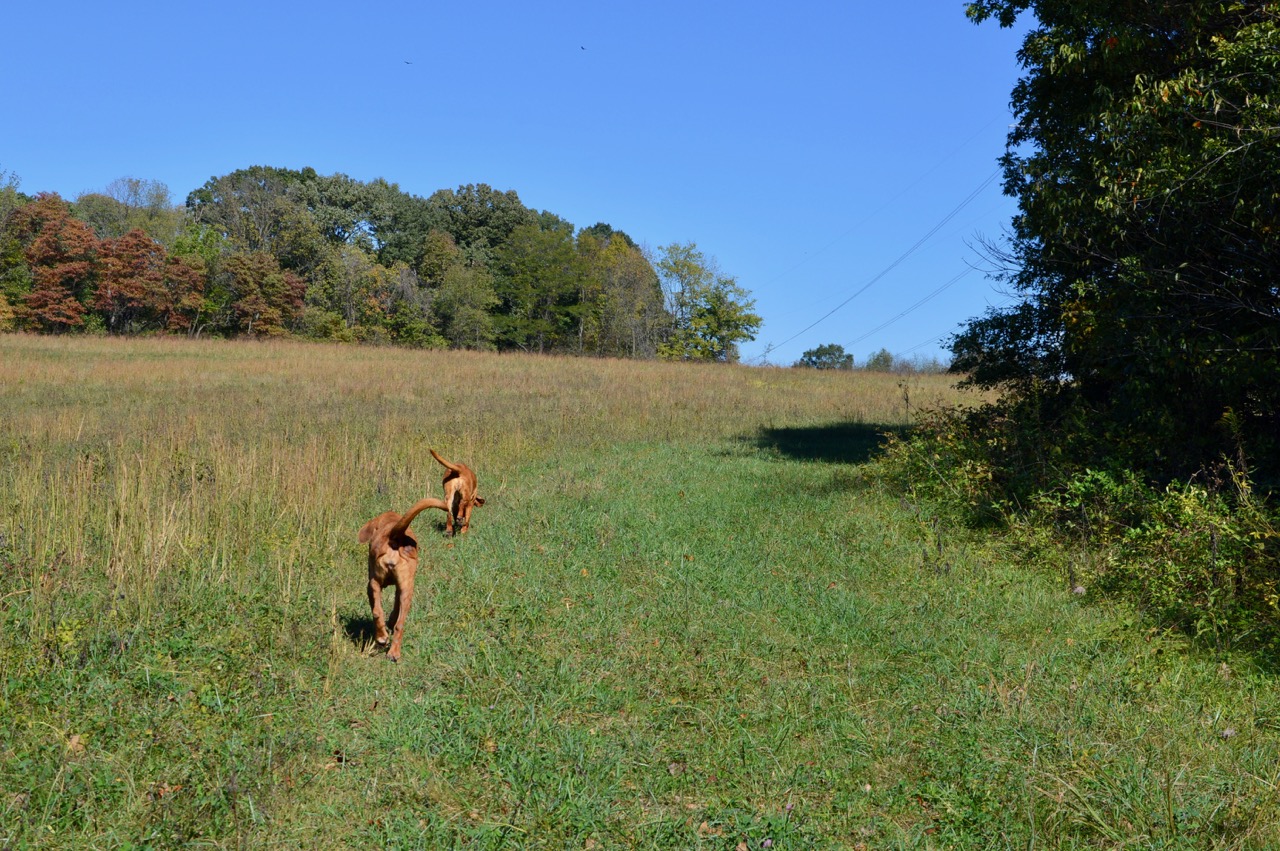 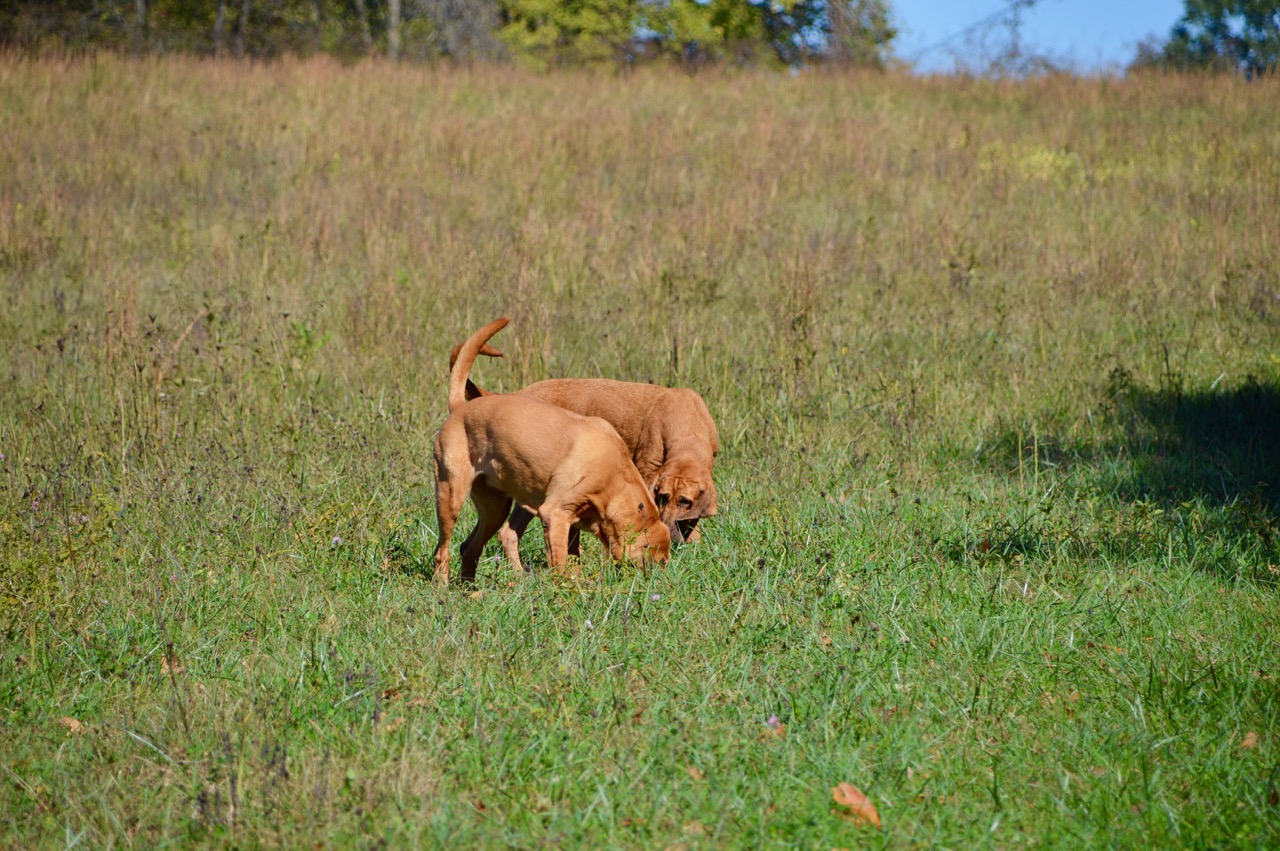 I could tell by the way they took off running they were headed for the 'far right corner' ... the scent of deer must have been strong. 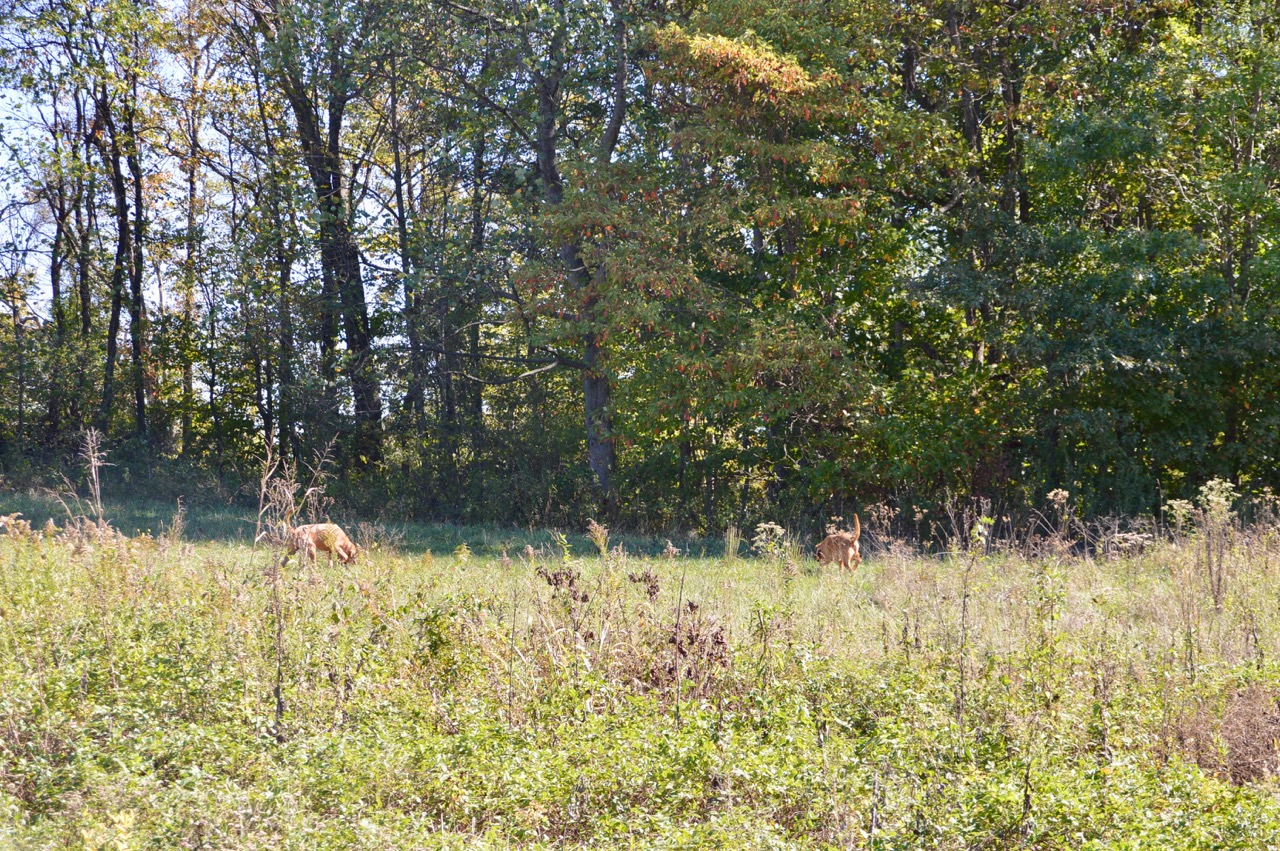 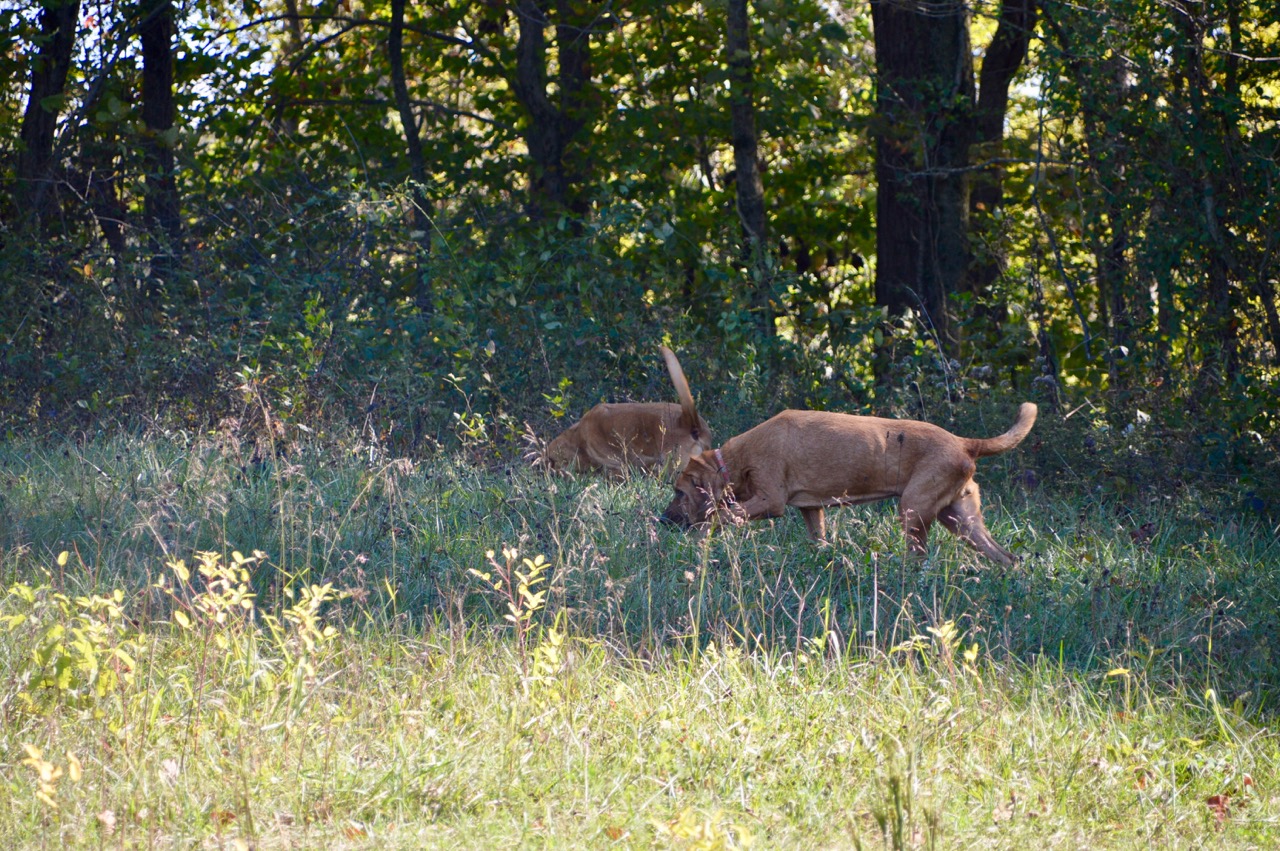 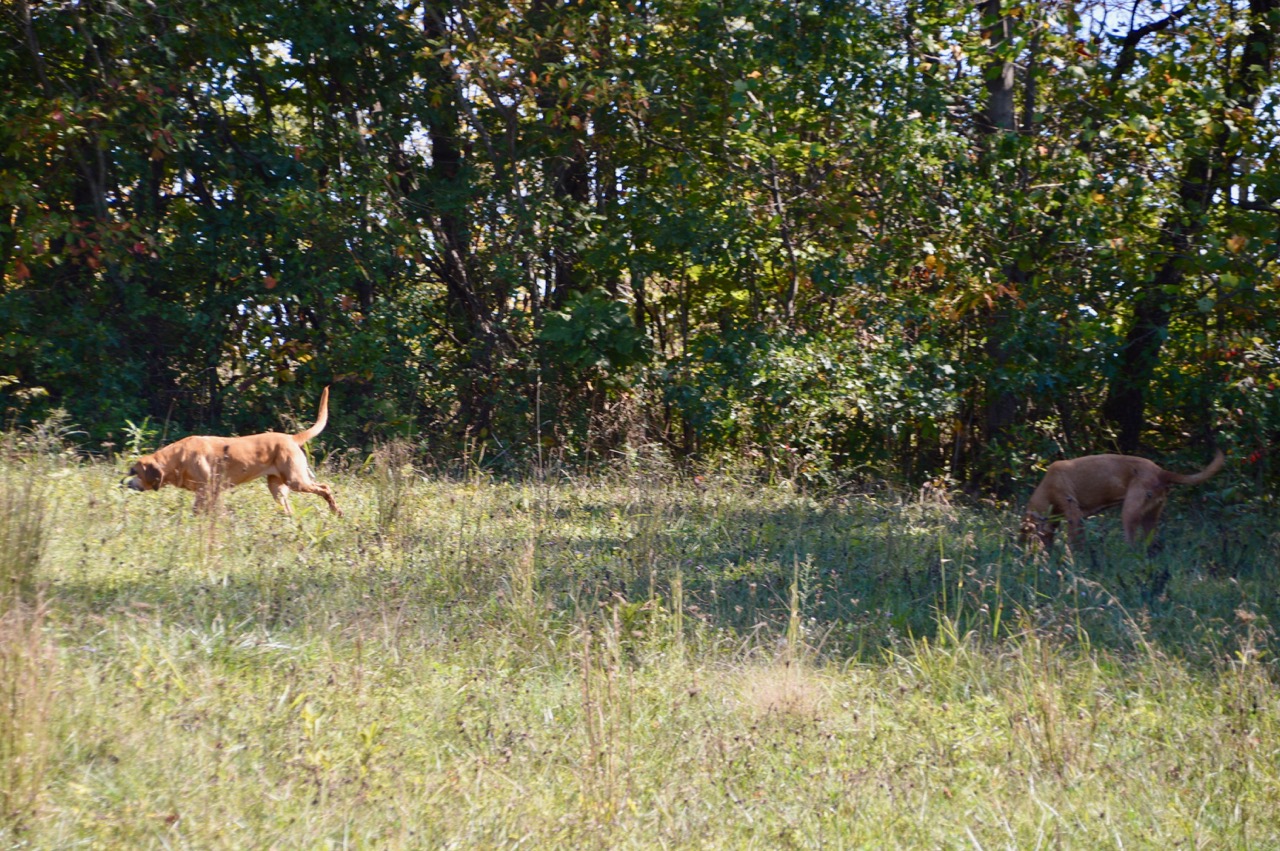 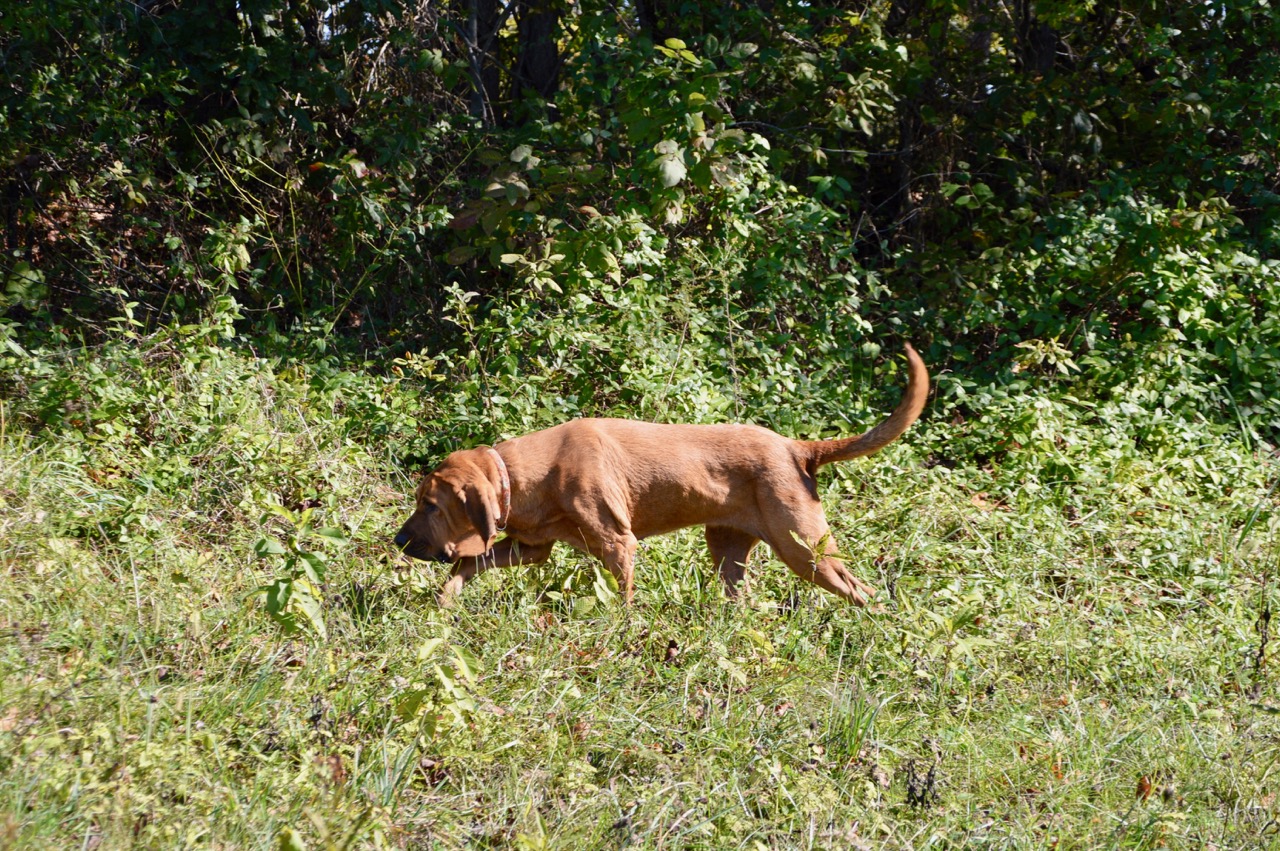 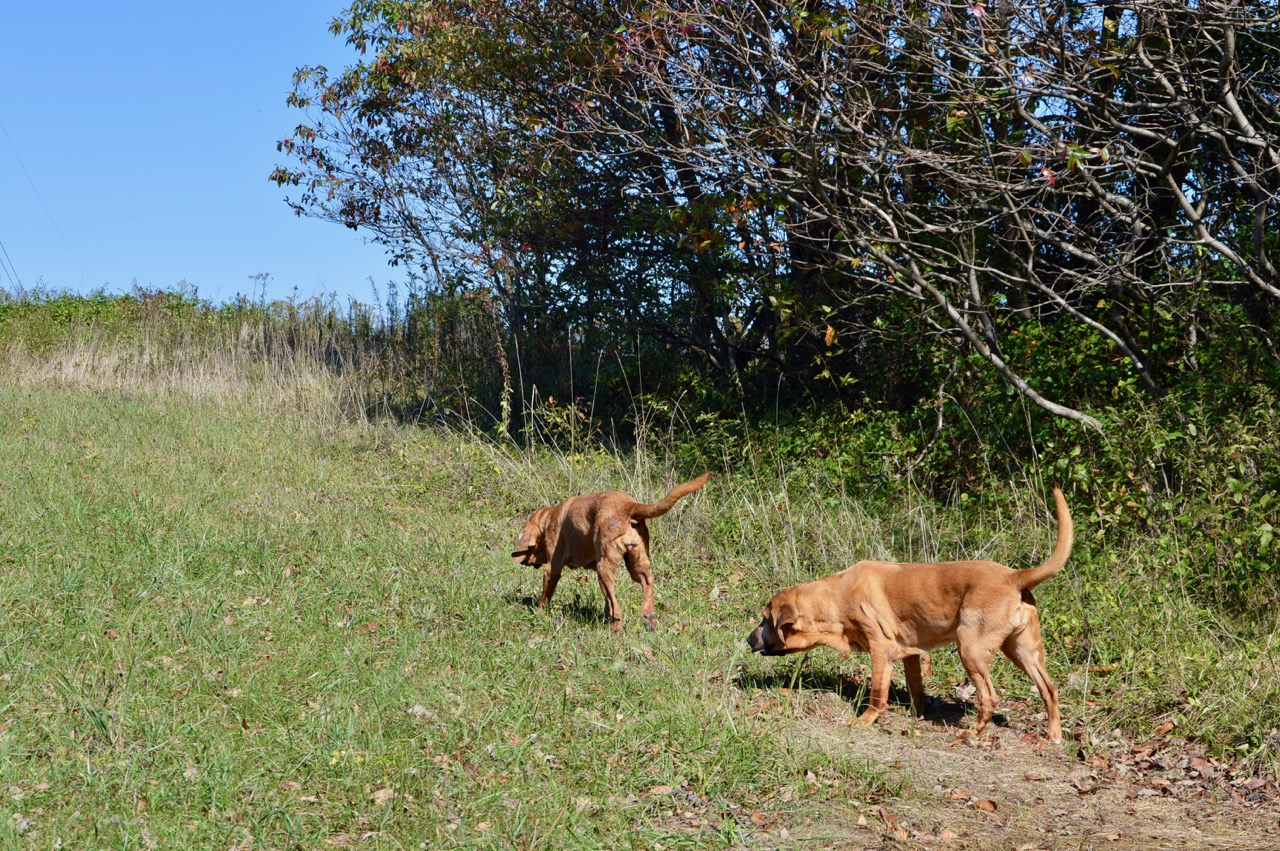 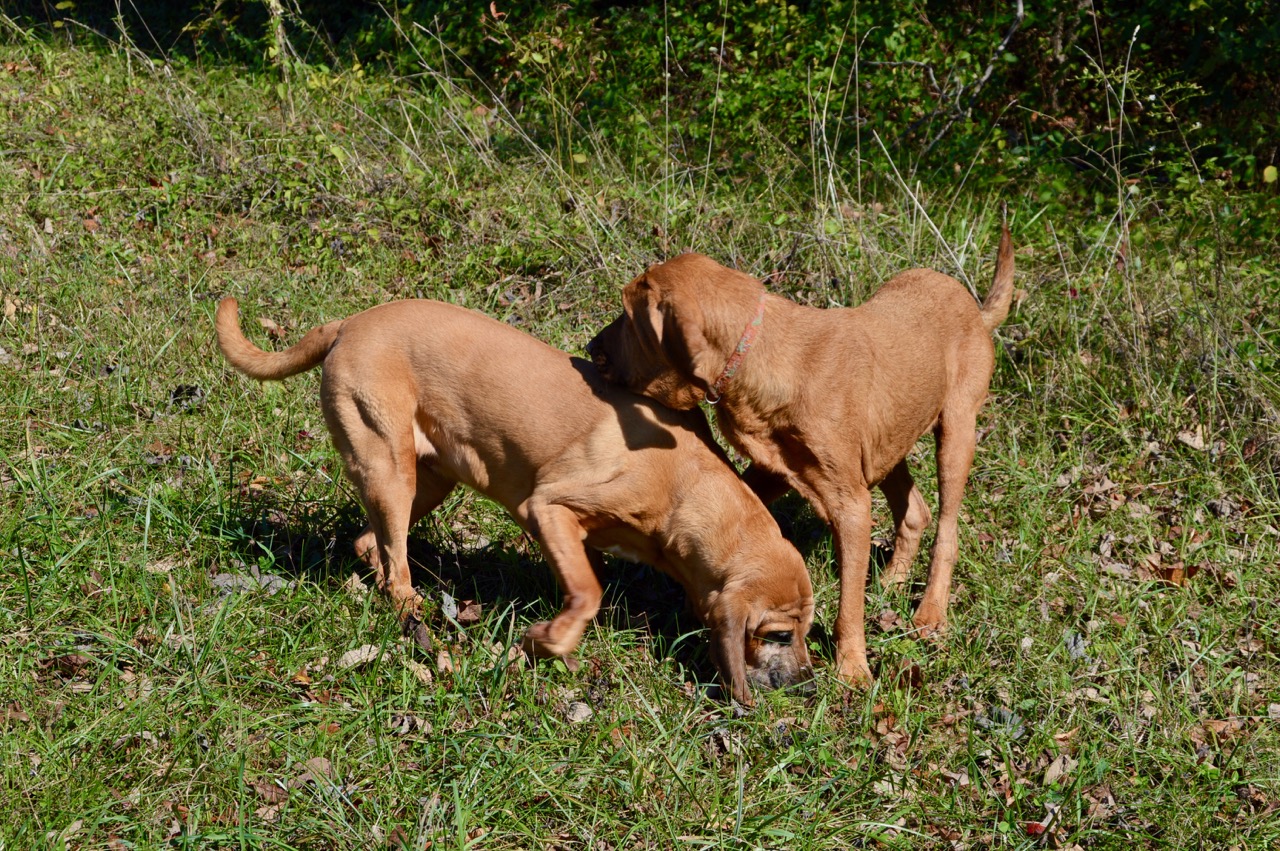 The hounds did not know that high above them, on the tower for high powered cables, sat a hawk. As we got closer to making the final turn home, the hawk flew away into the north woods. 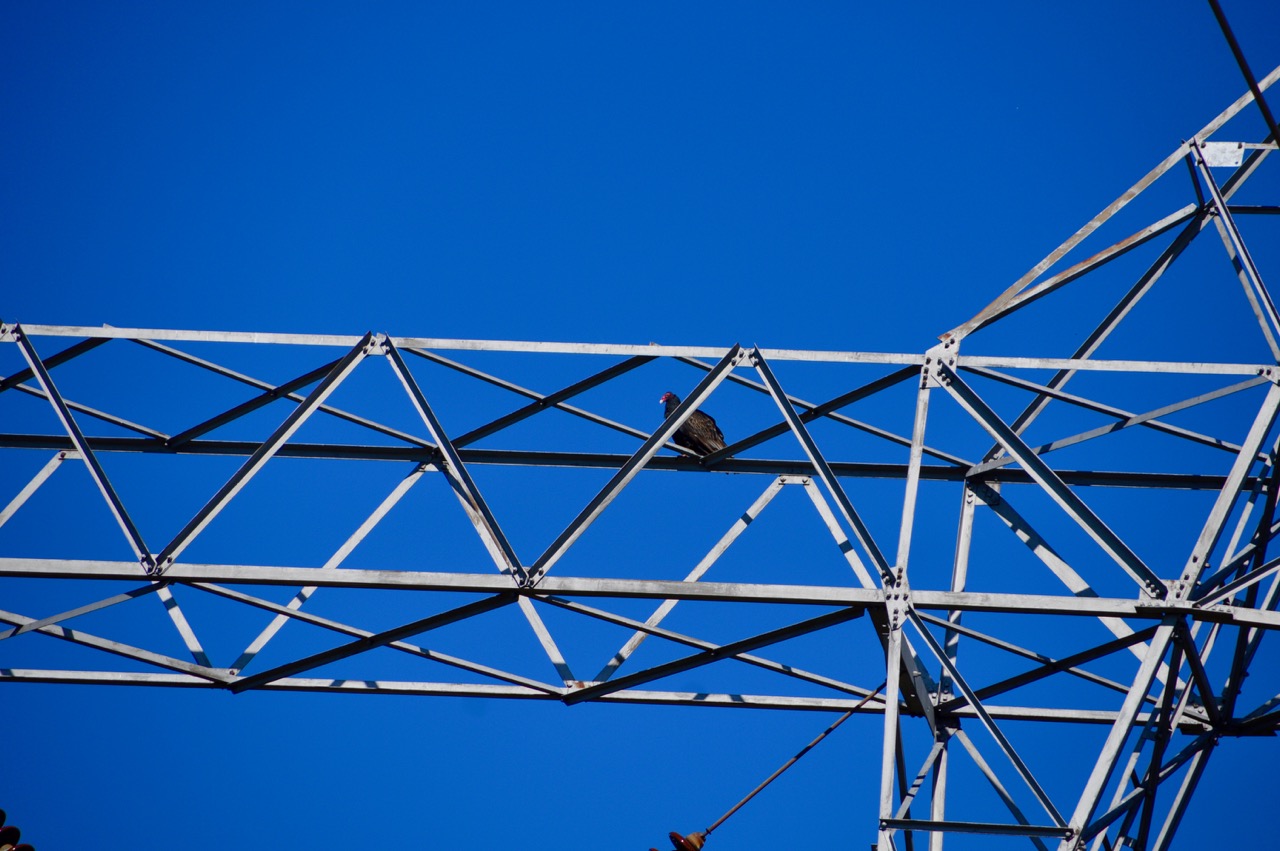 I don't know how it's possible but Stella did it ... while running and having her tongue stick out and fold sideways. You will need to click the photo for a closer look. 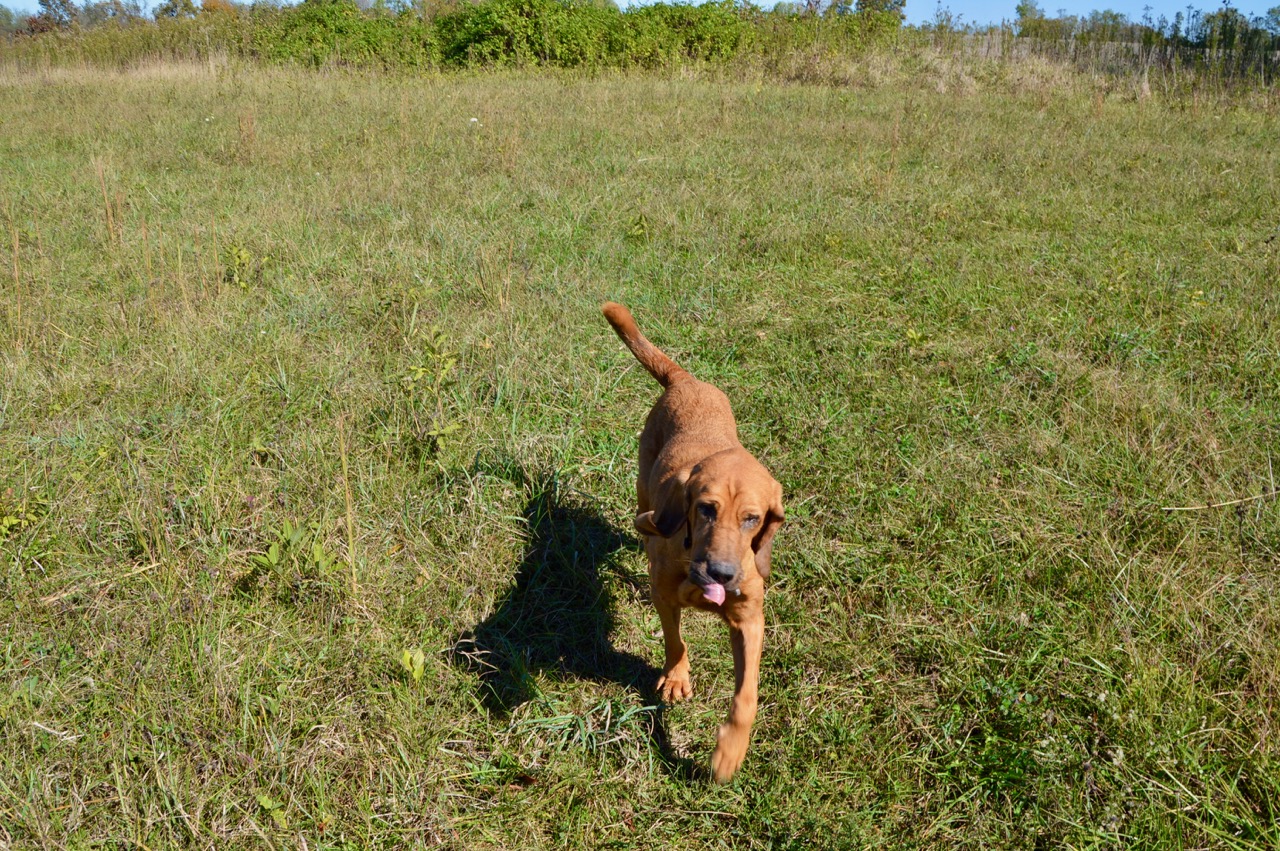 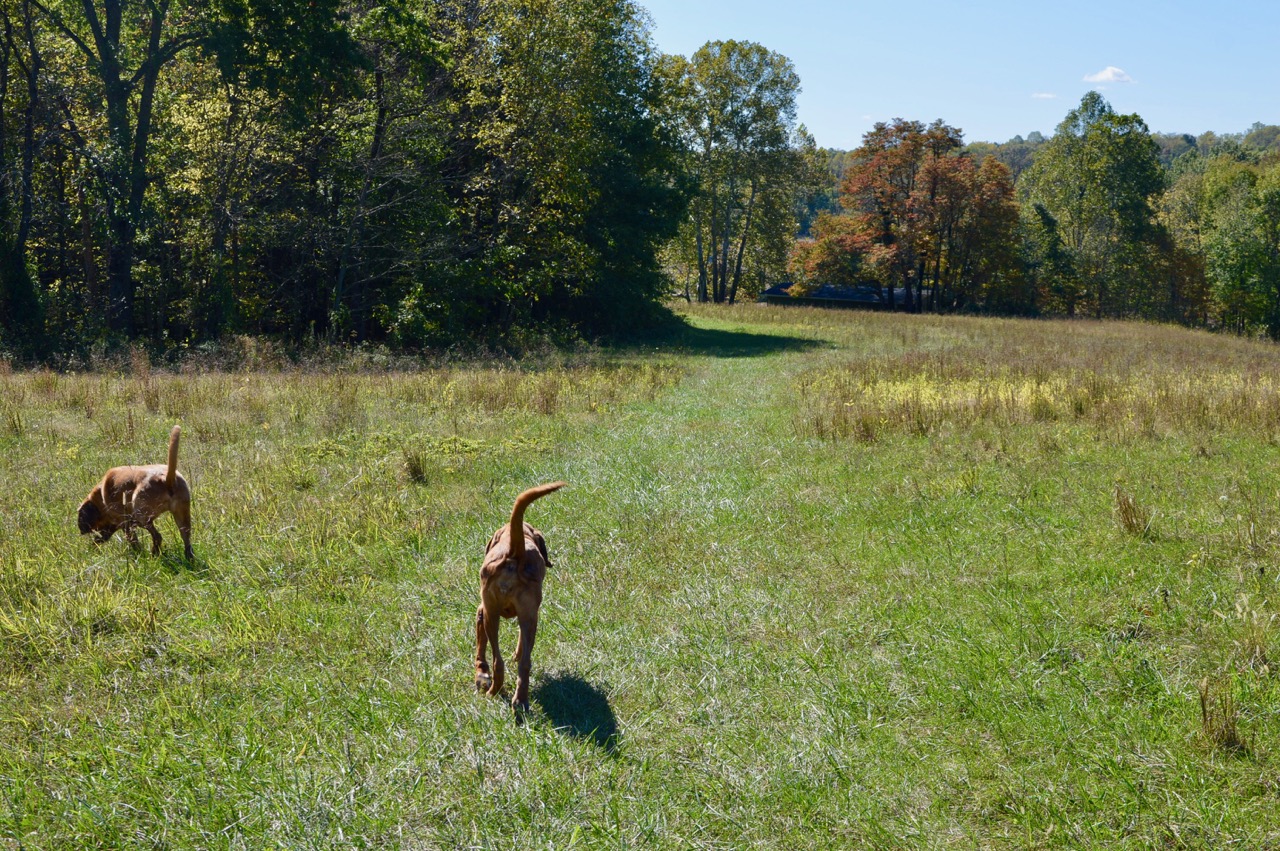 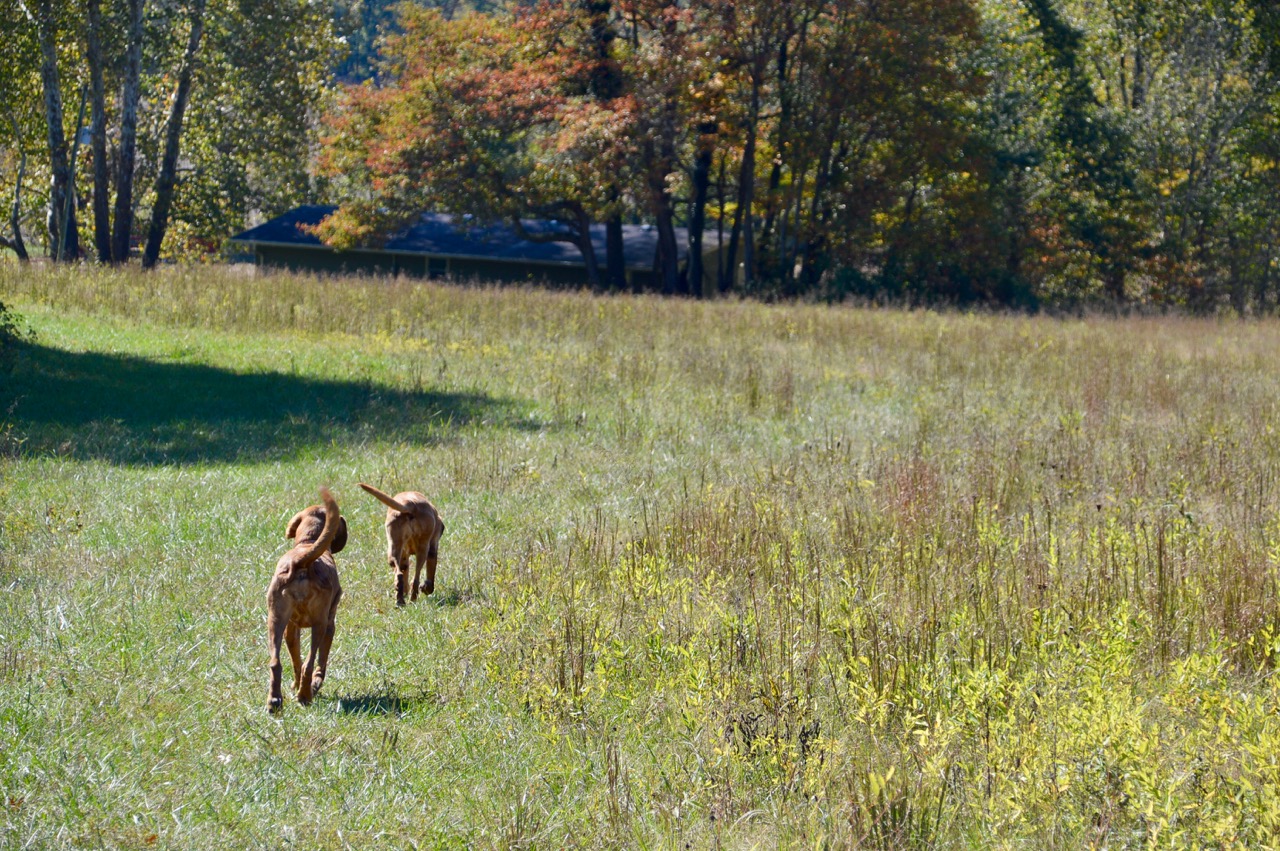 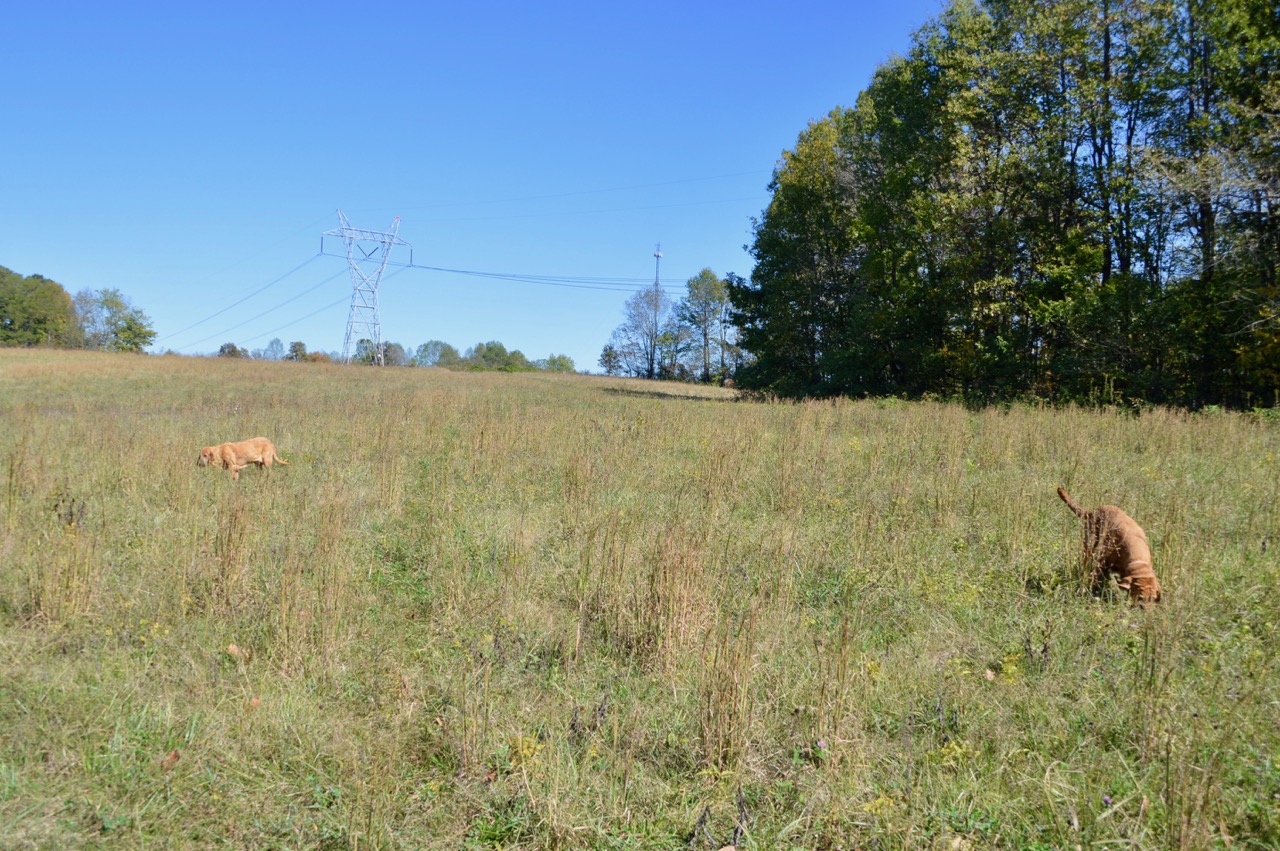 Later this afternoon I let Sadie roam the field on her own without a leash. I put Stella on the 80' tether to keep her somewhat near the house. It was such a nice day I didn't see any reason to keep them inside if they wanted to go outside.

I was at my computer when I heard a sound what I thought was coming from a hawk. I immediately ran outside thinking a hawk might be doing "fly byes" over Stella or Sadie. All I saw was a deer about 30' from the yard, turning and sprinting away while Stella sat in the yard staring in the deer's direction. With Sadie out in the field with no leash I was sure I was going to have to hunt for Sadie ... so I grabbed the retractable leash for Stella and my binoculars.

By the time I had transferred Stella from the tether to the leash and picked up my binoculars off the ground ... Sadie was sprinting to me from the north edge of the field, panting, out of breath ... the deer chase must have been a short one. You could tell by the look on her face she had some fun chasing that deer out of 'her' field.

It looks like a week of great weather here in 'the tropics' of southern Indiana.
at October 17, 2017