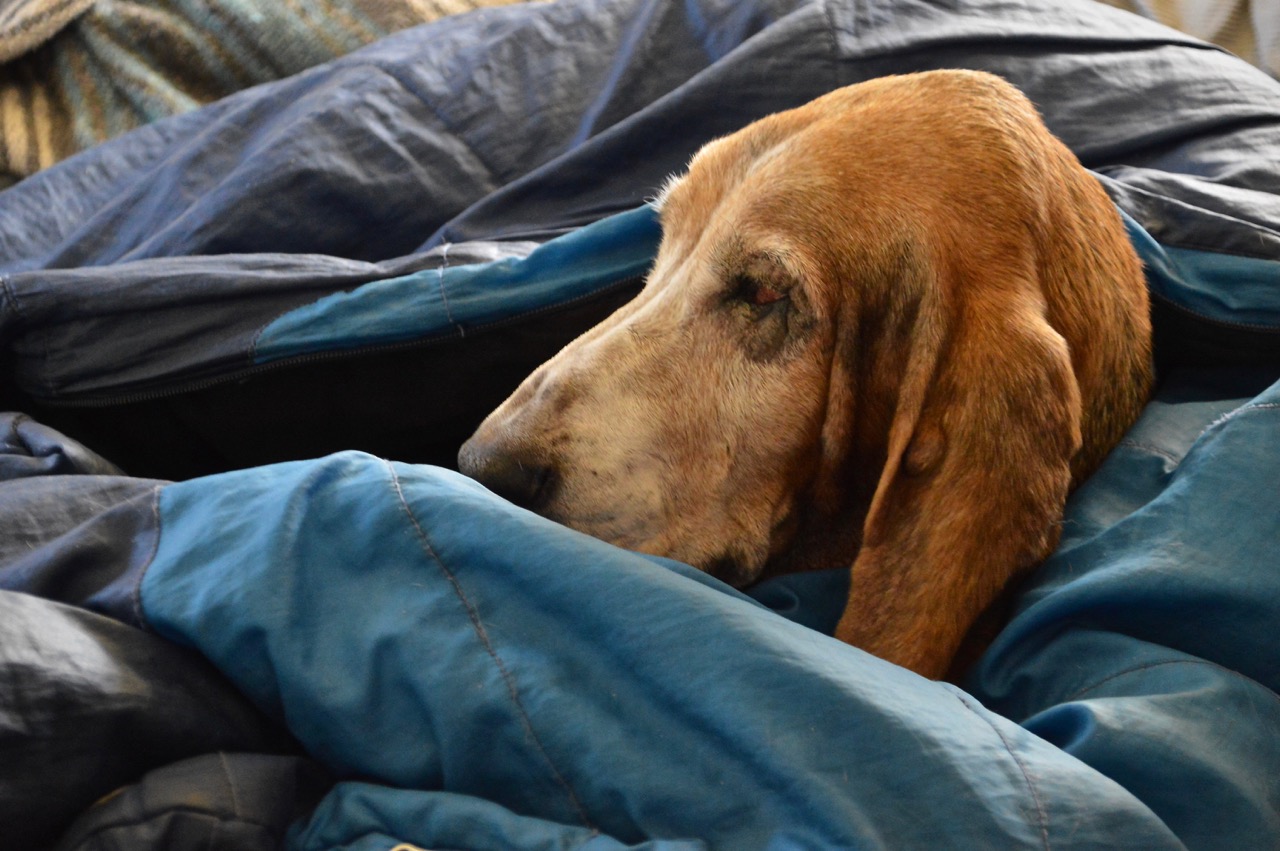 As usual, every morning I tell Heidi we are going for a walk but she has never been into morning walks. With only one Mexican wool blanket left to wash and then hid in the closet due to recent increase in redness on her legs ... I donated my Marmot Trestle 15 sleeping bag to ween her away from the wool blankets. When she heard me talking she slowly raised her head out of that pile of sleeping bag and without looking at me, telling me there was no way she would go outside in 56° weather.

It was a few minutes later when we started the walk. Stella had her wet tall grass for the morning, Sadie was already sprinting into the field. It felt like perfect weather at 56° for cargo shorts, North Face snow boots to keep my feet dry and a sweatshirt. 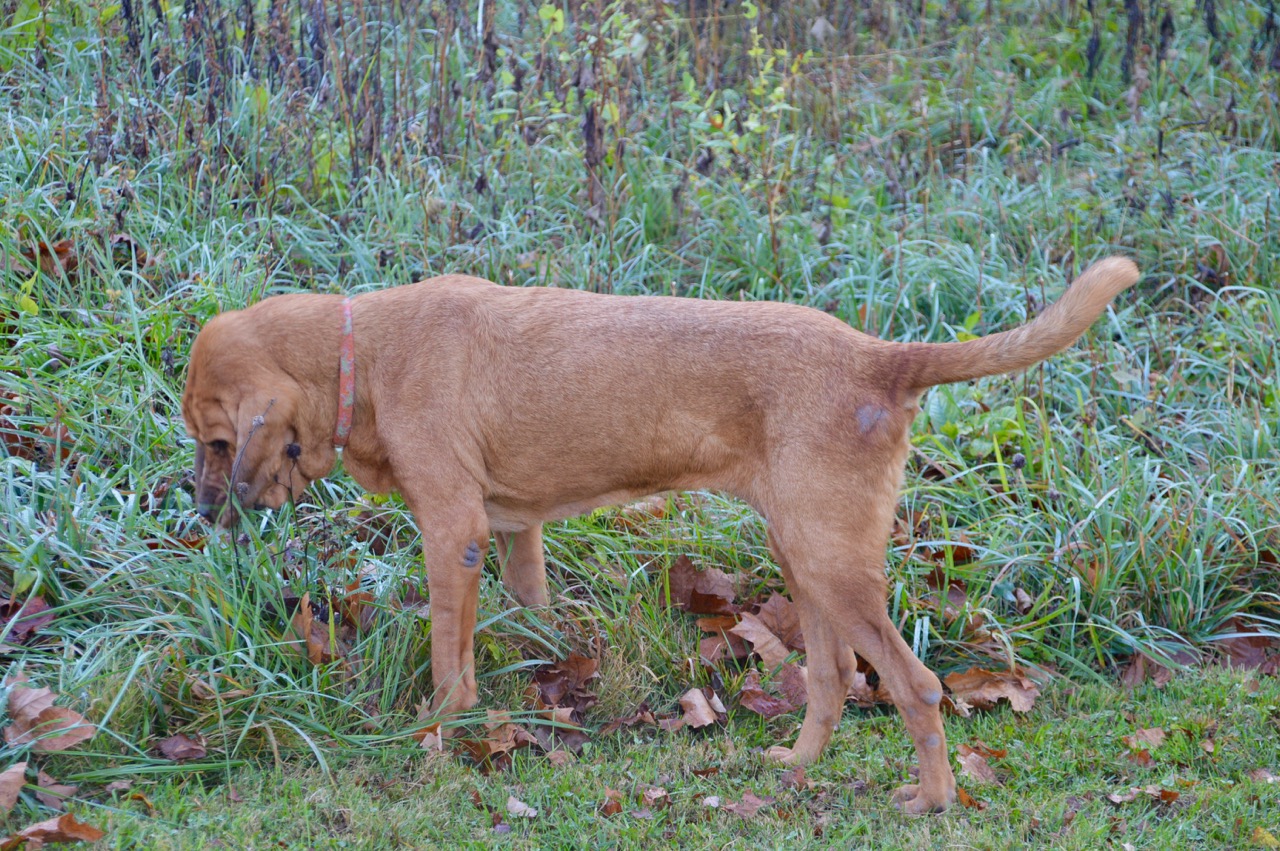 I don't think there were any deer in the area but I am sure Sadie had smelled or heard a rabbit escaping into the safe zone of the woods. What ever she heard or smelled, it definitely had her interest. 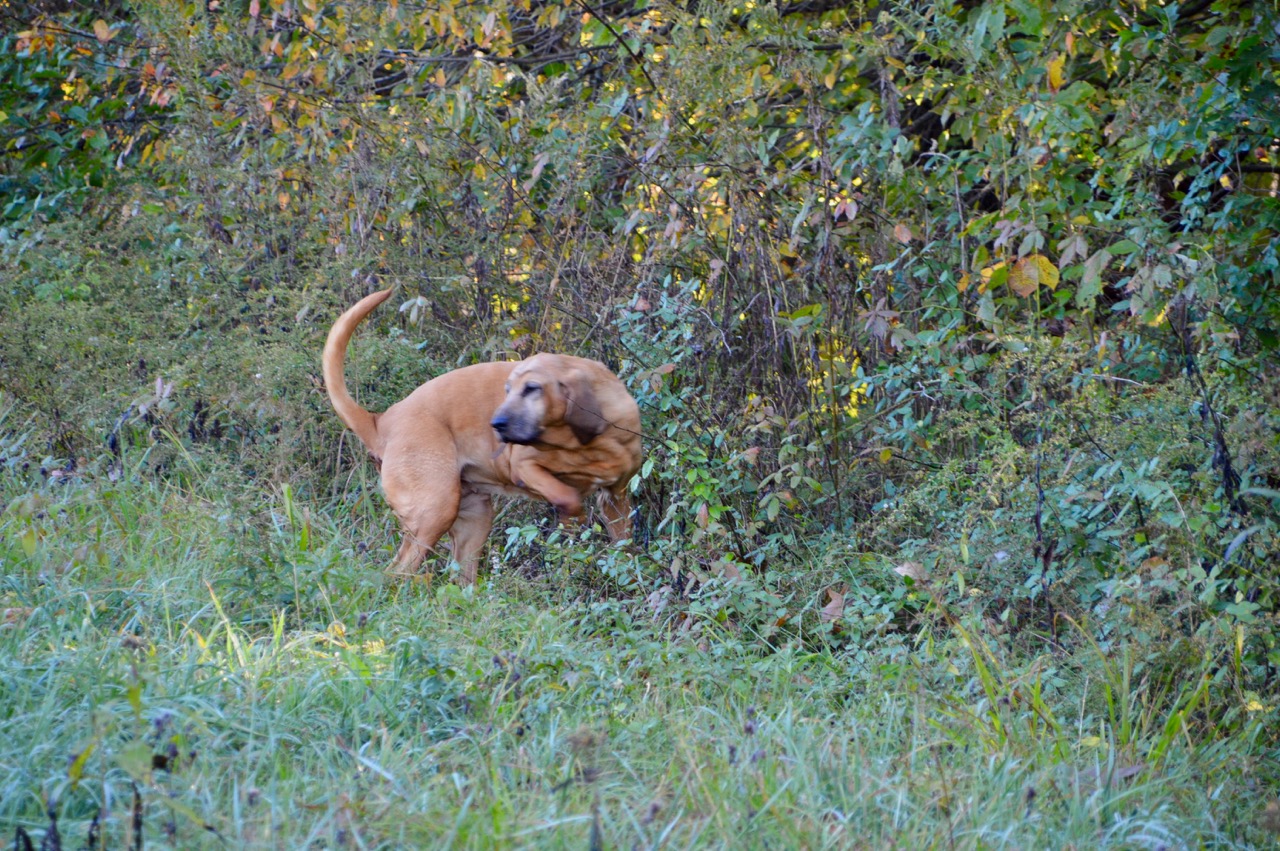 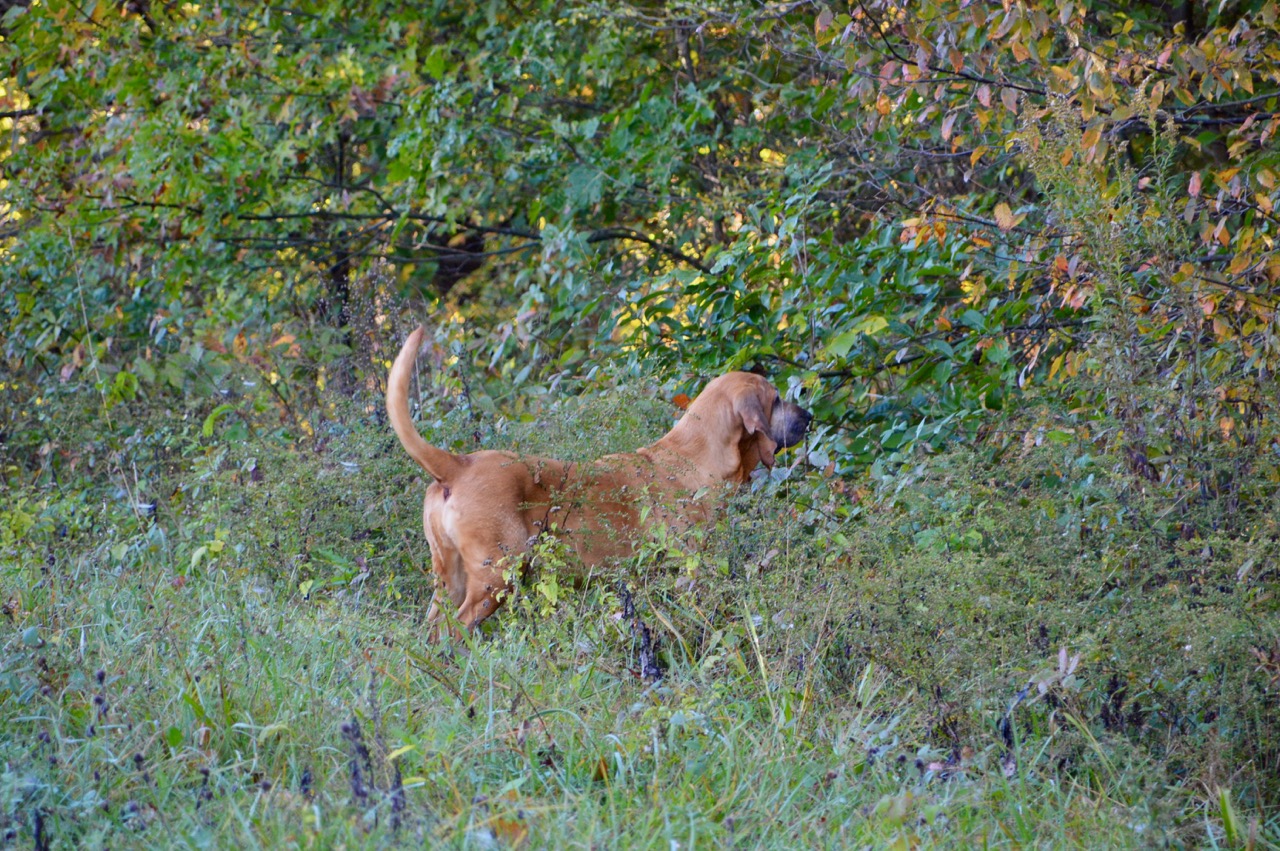 We proceeded on without Sadie. I realized it was Friday with a high of 77° forecasted this afternoon. I have BIG plans for this afternoon probably after the hounds have their lunch. Besides cutting toenails of all the hounds I am going to burn my huge burn pile with expectations of flames over 10' high. I'll try to take photos if possible ... otherwise my hand will be on a running garden hose to control any unexpected turns of the fire. 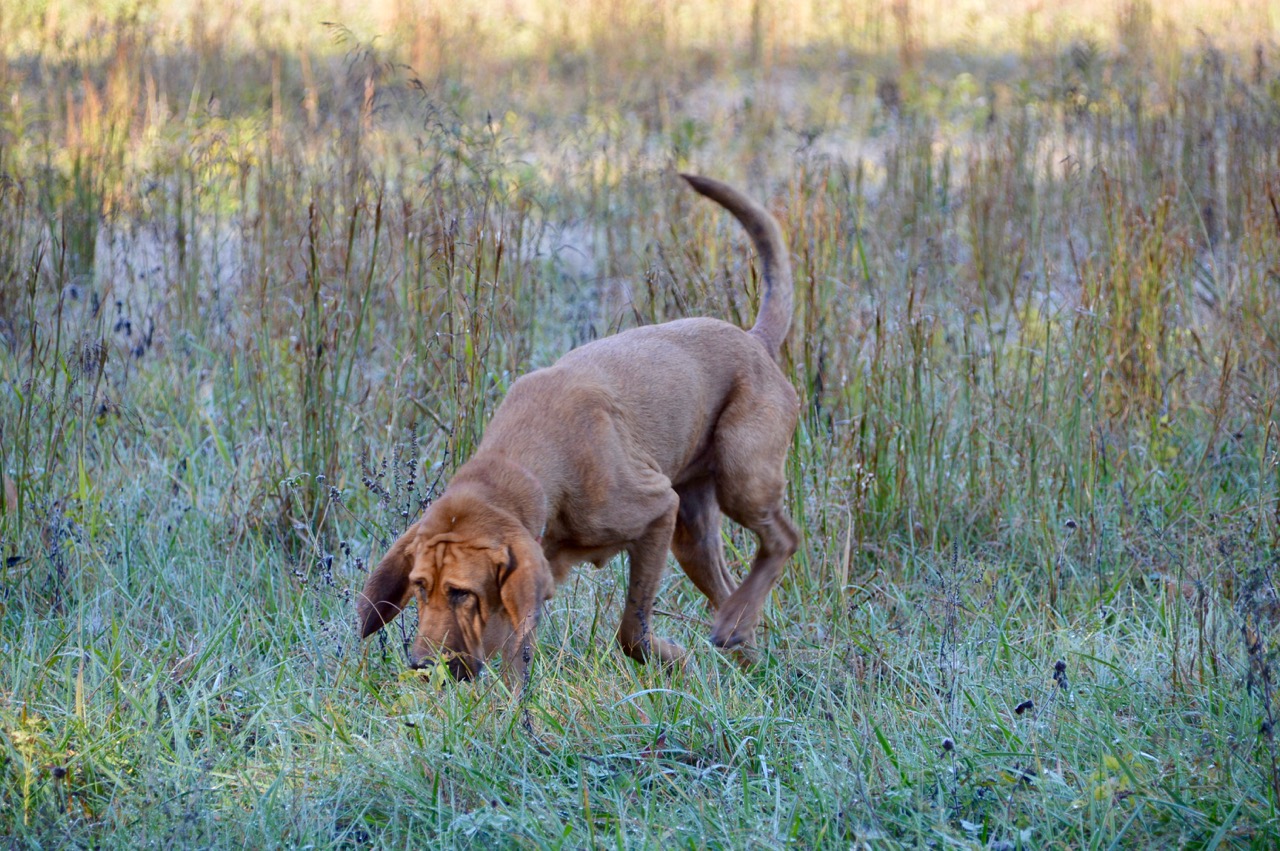 Stella was more than happy to spend time tracking scents today and running enough to keep up with Sadie. They spent more time side by side than apart so I guess they thought with all the new scents out today that two noses would be better than just one nose. 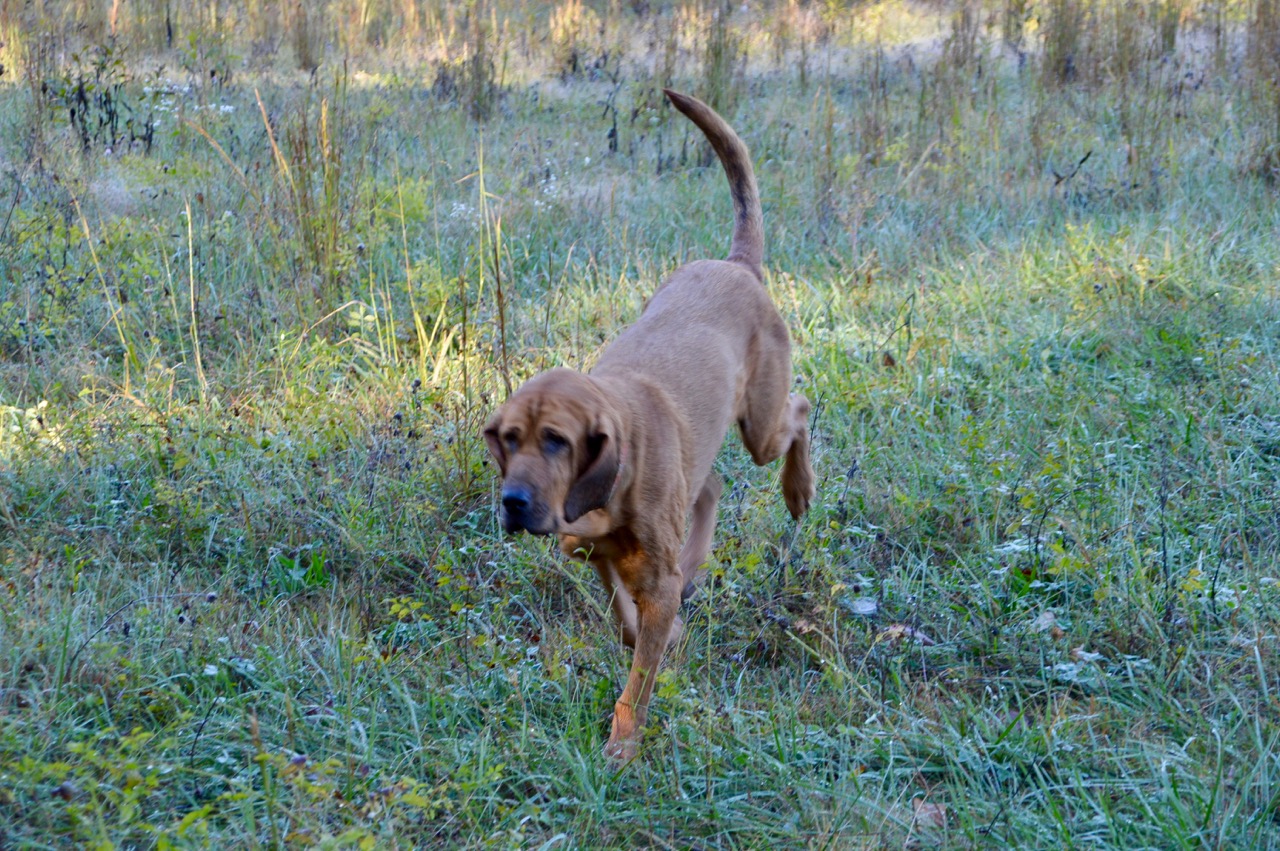 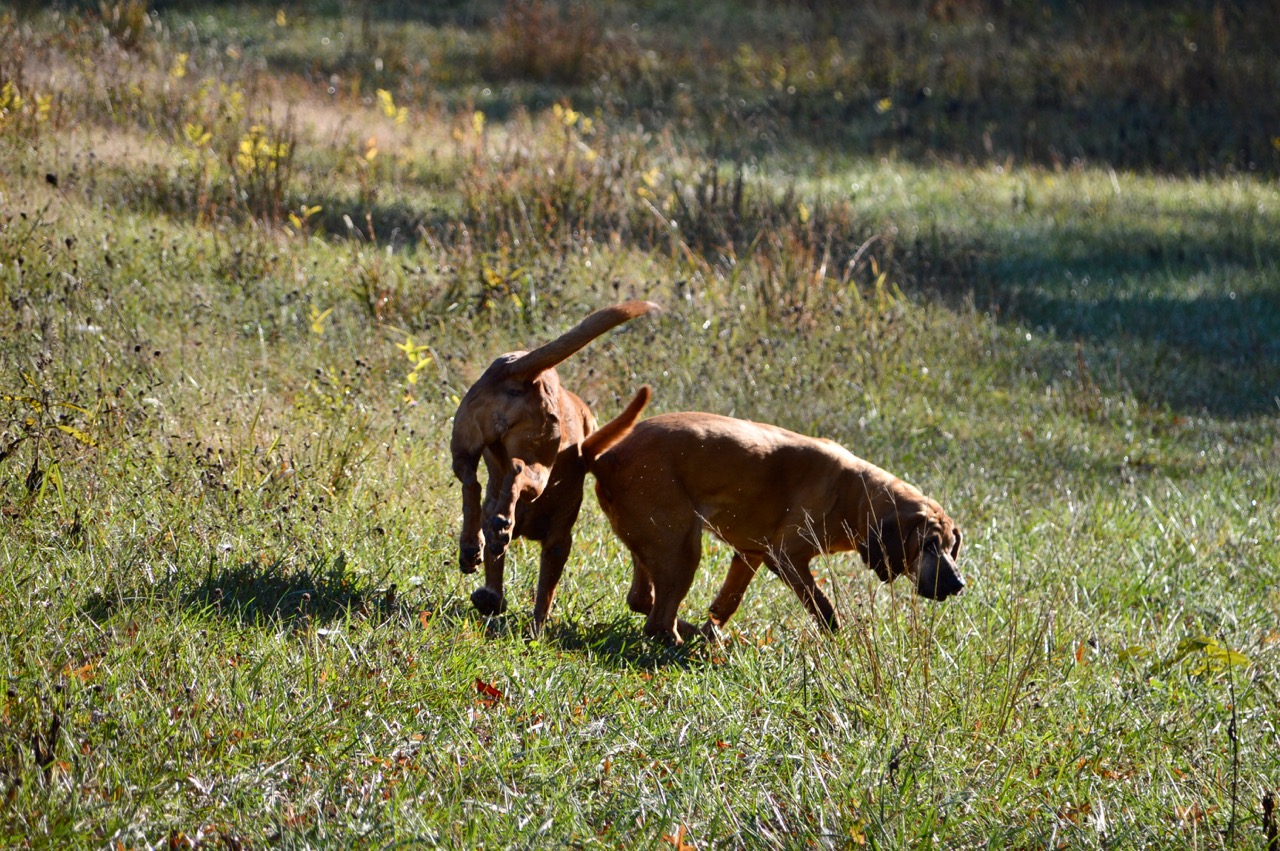 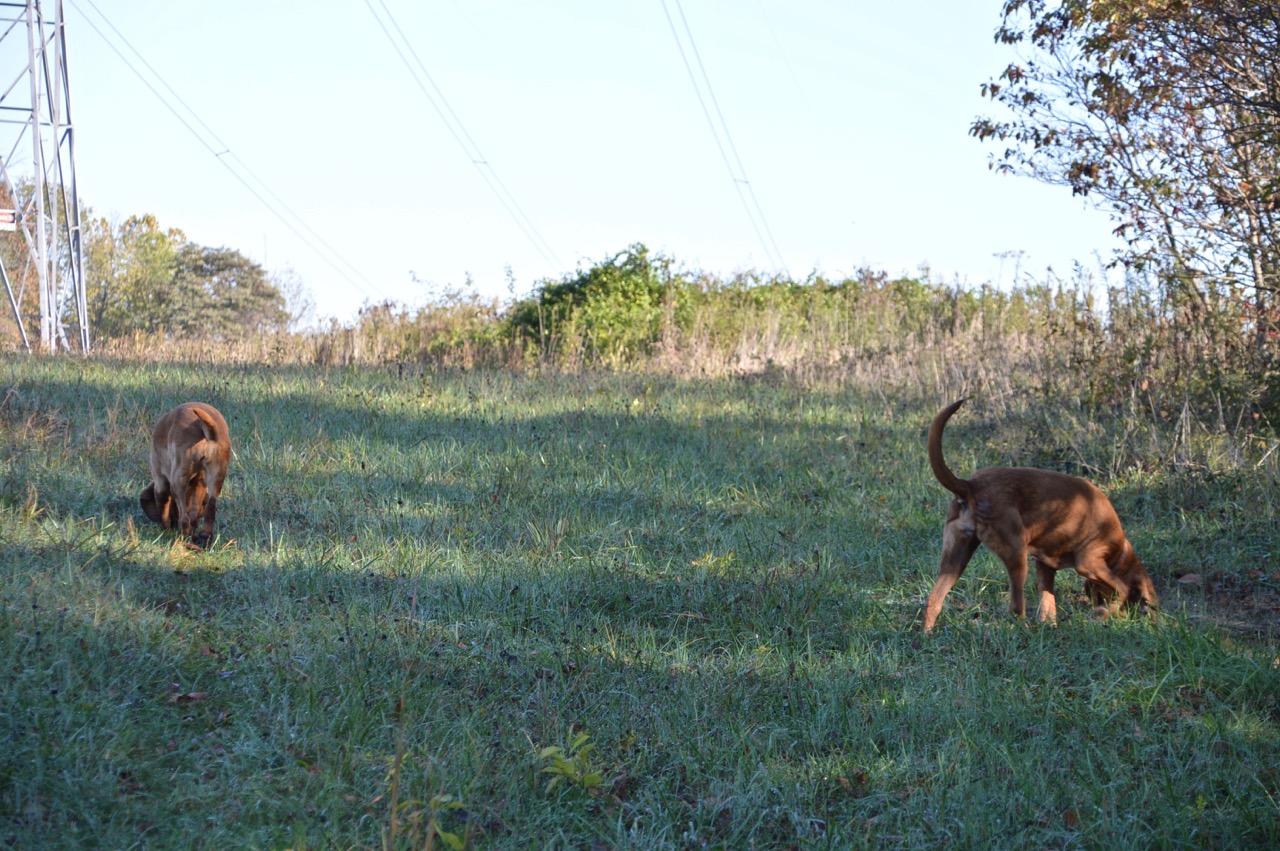 This had this pose a few times during the walk. That always has me scanning the horizon completely around the field for any deer that might be out late in the morning. It has happened before. You can click the 'label' on the right sidebar on "Deer Chase" and see photos of past times where deer had the hounds sprinting after them. 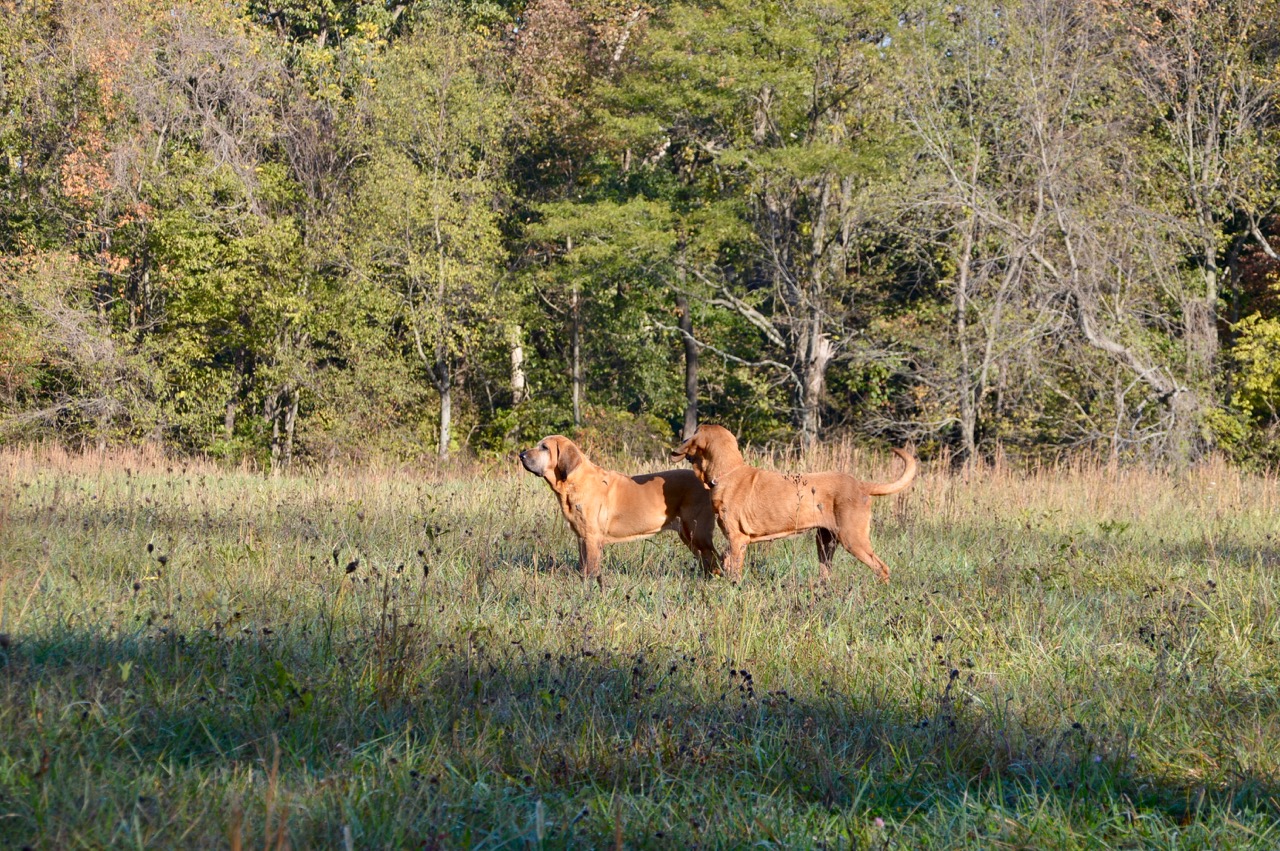 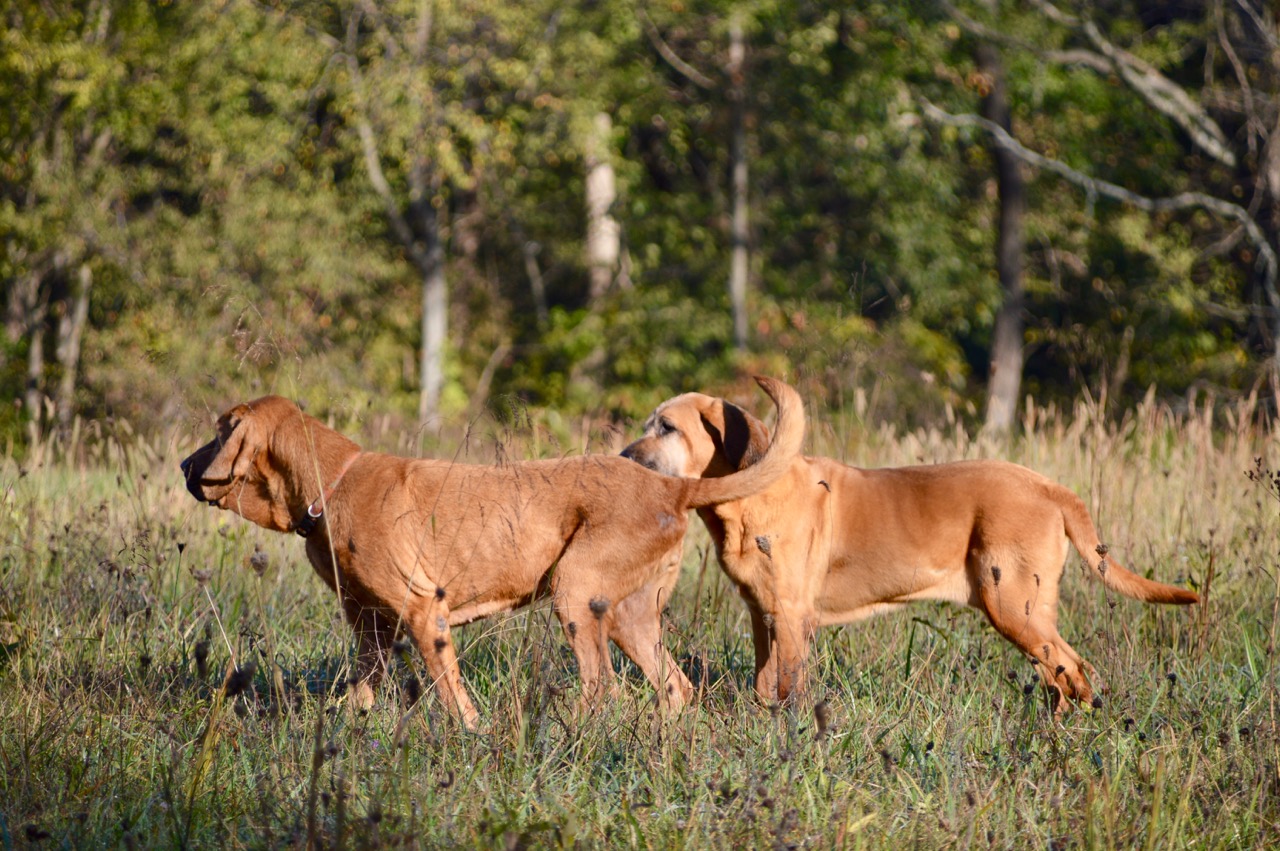 It's when they suddenly take off running after scanning the air with their noses that puts me on alert, that I might be running after them whether I want to or not. 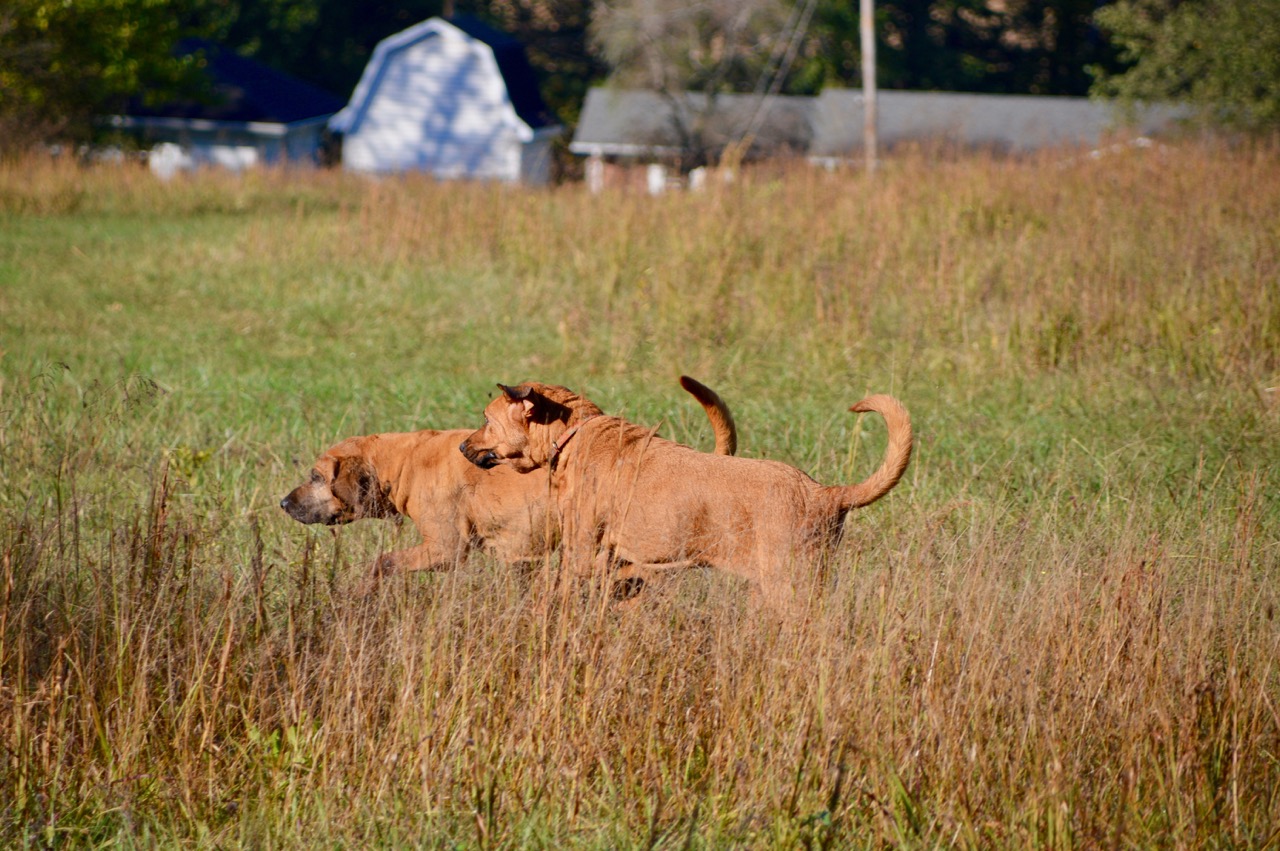 They were just moving to a different part of the field instead of chasing whatever they found. 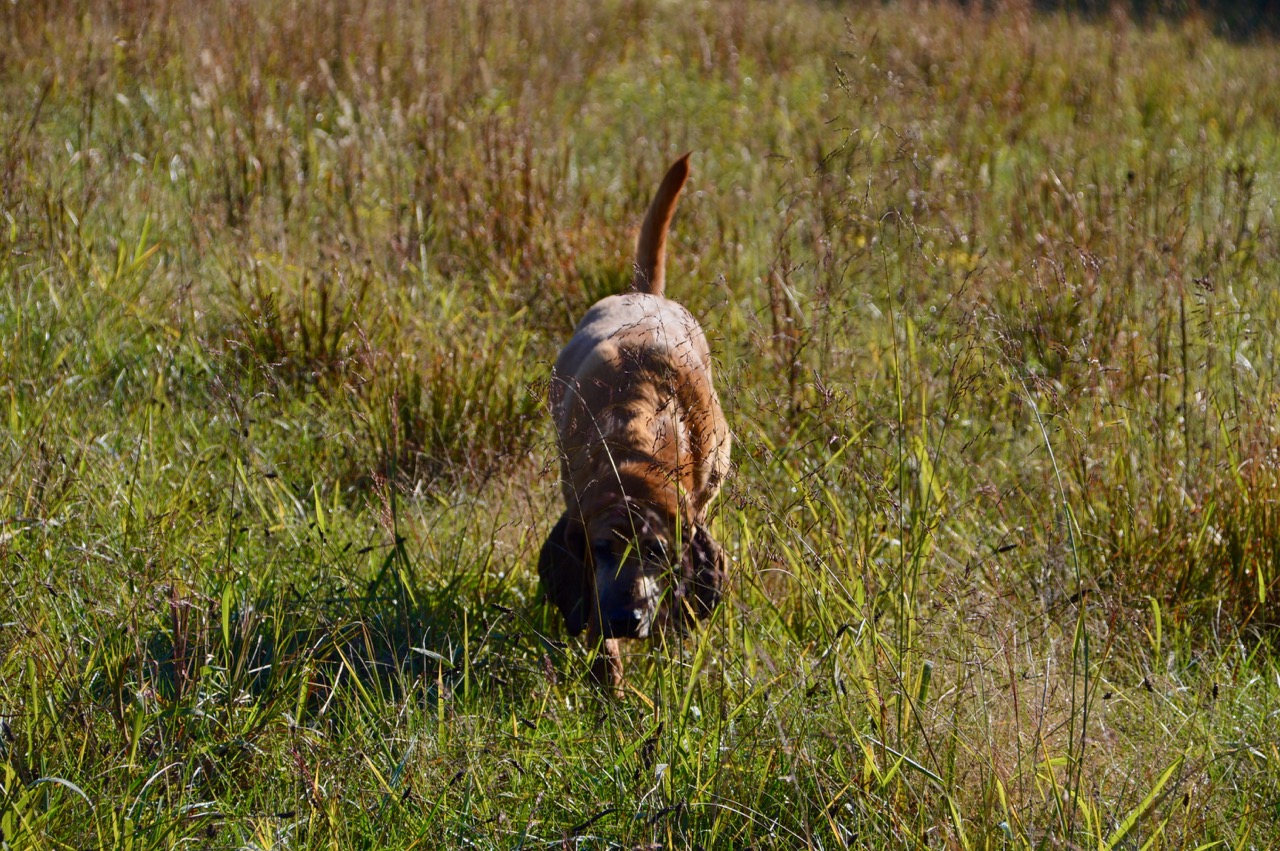 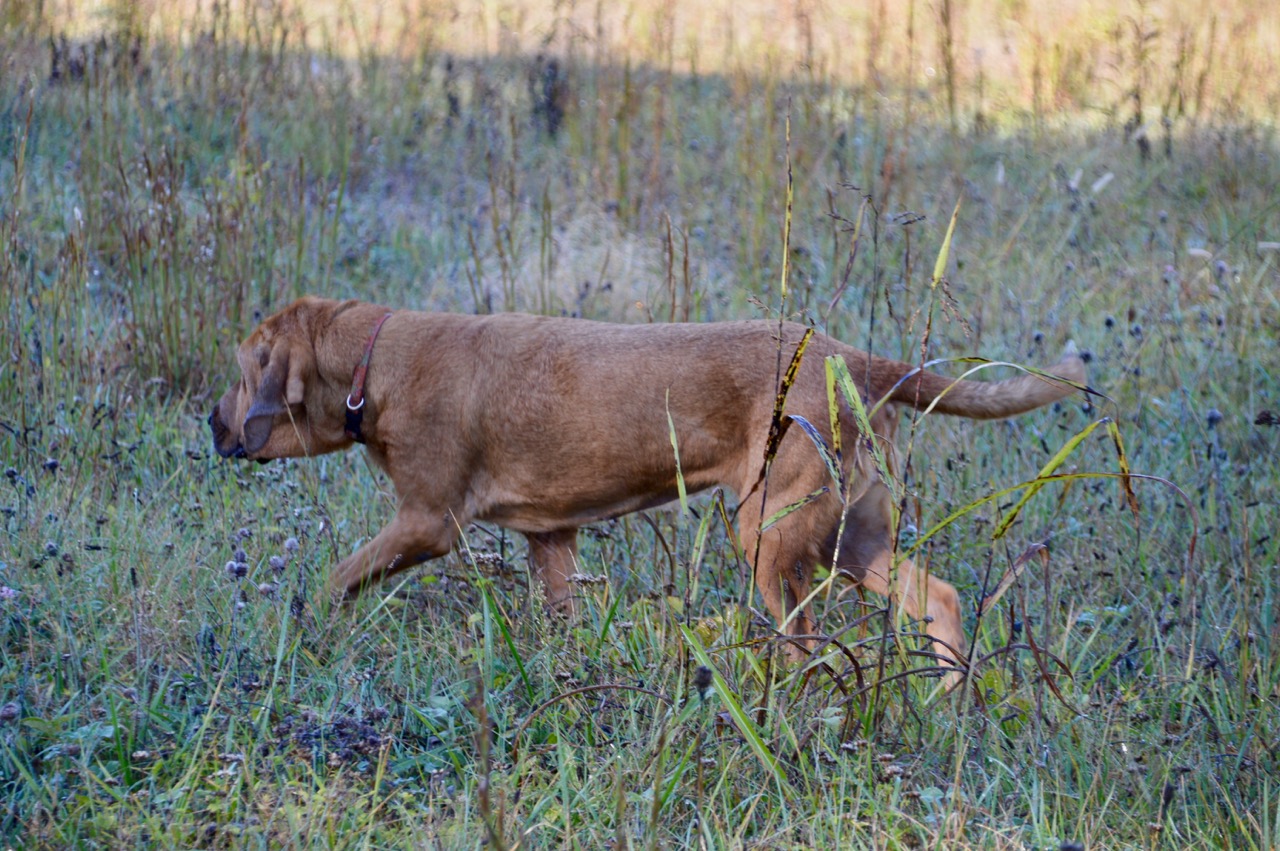 They locked their noses onto the 'alternate' path this morning. Was it the cat they smelled? What makes me ask that is because only a field cat would be this close to the trees in the backyard. 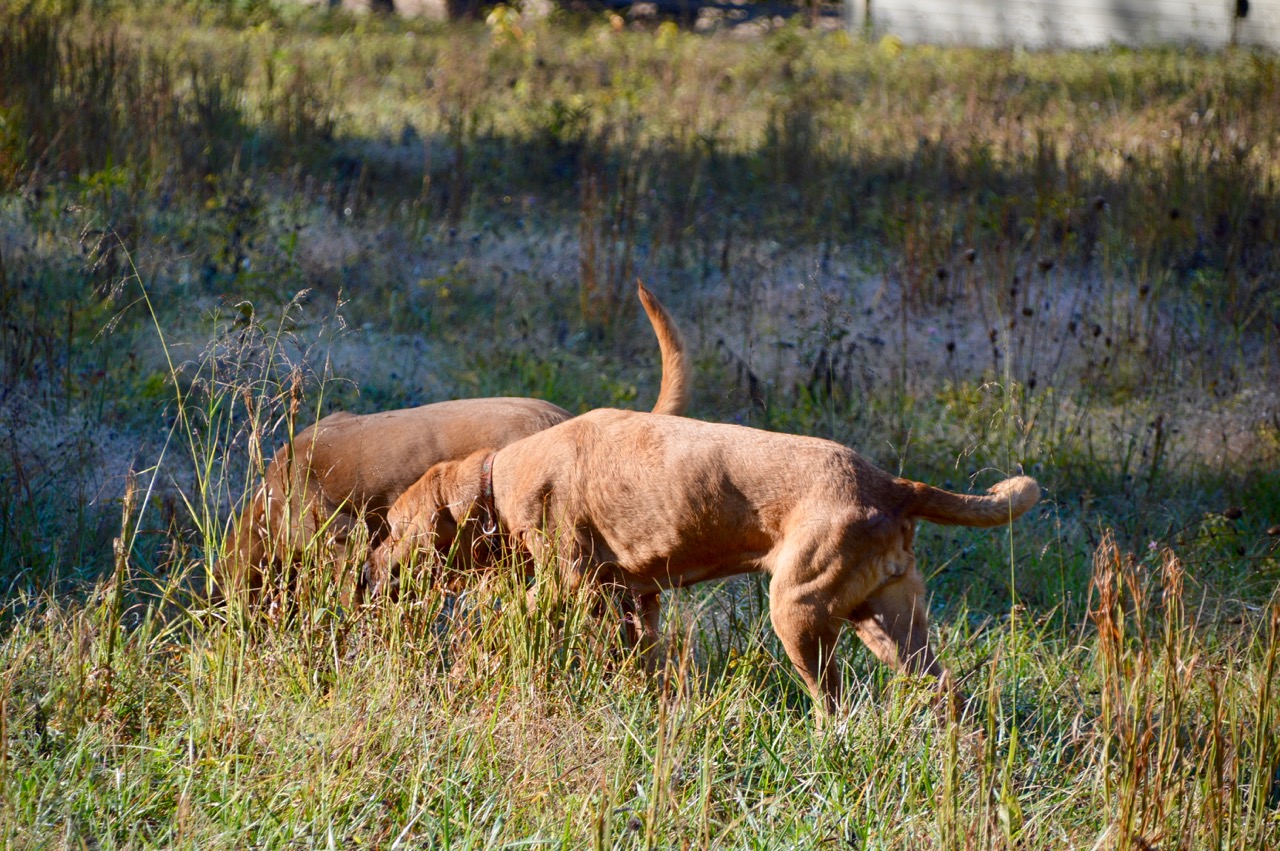 By the time we stepped inside, I had my afternoon plans laid out in my mind. I'll pull the weeds in the front flower beds, get the leaf blower out and blow what leaves are left around my house and driveway bank down the hill toward the highway and let fast traffic take care of disposing them. I need to make another trip on the roof to clean out any dry leaves from the gutters before it rains in the next few days.

After that ... Operation Hound Nails which is always challenging with Sadie sprinting around the yard trying to escape the clippers, Stella rolling on her back wanting a manicure as does Heidi. All three will be bribed with dog treats.

The big excitement will be starting that fire to burn down as much of the burn pile as possible. Fallen limbs this winter will start a new pile for next springs burn.

I tried to sneak quietly to catch a picture of Heidi sleeping when we got back. She heard me just in time to look at the camera. 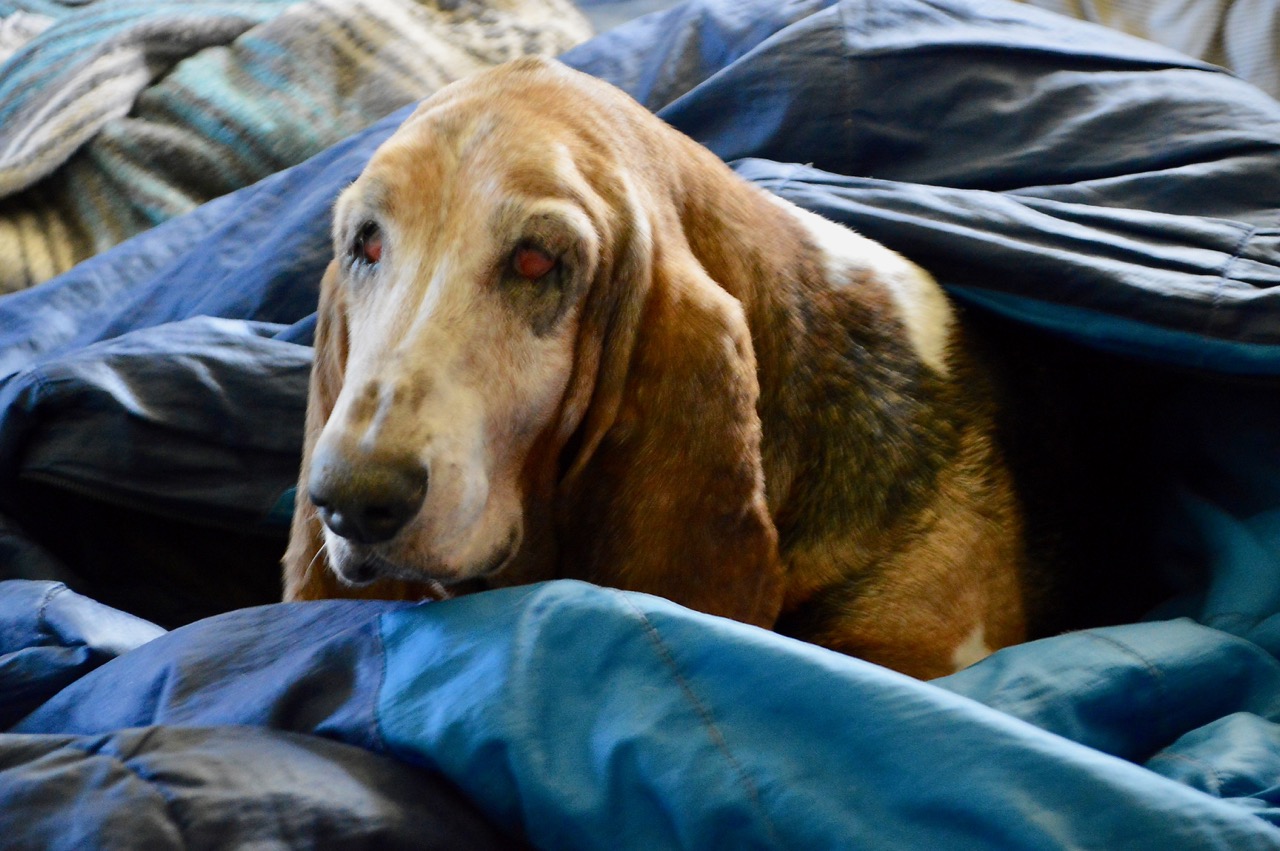 Thinking I was going to get some good fall colors this year, I started a new folder inside my Photos program named 'Fall Colors' just like I did for 'Butterflies' last year. I take the same photo every Friday of three different areas. As you can see from the comparisons below ... not much has happened this year for bright vibrant colors.

Top photos of each were taken September 15 ... next photos were taken this morning, October 20. 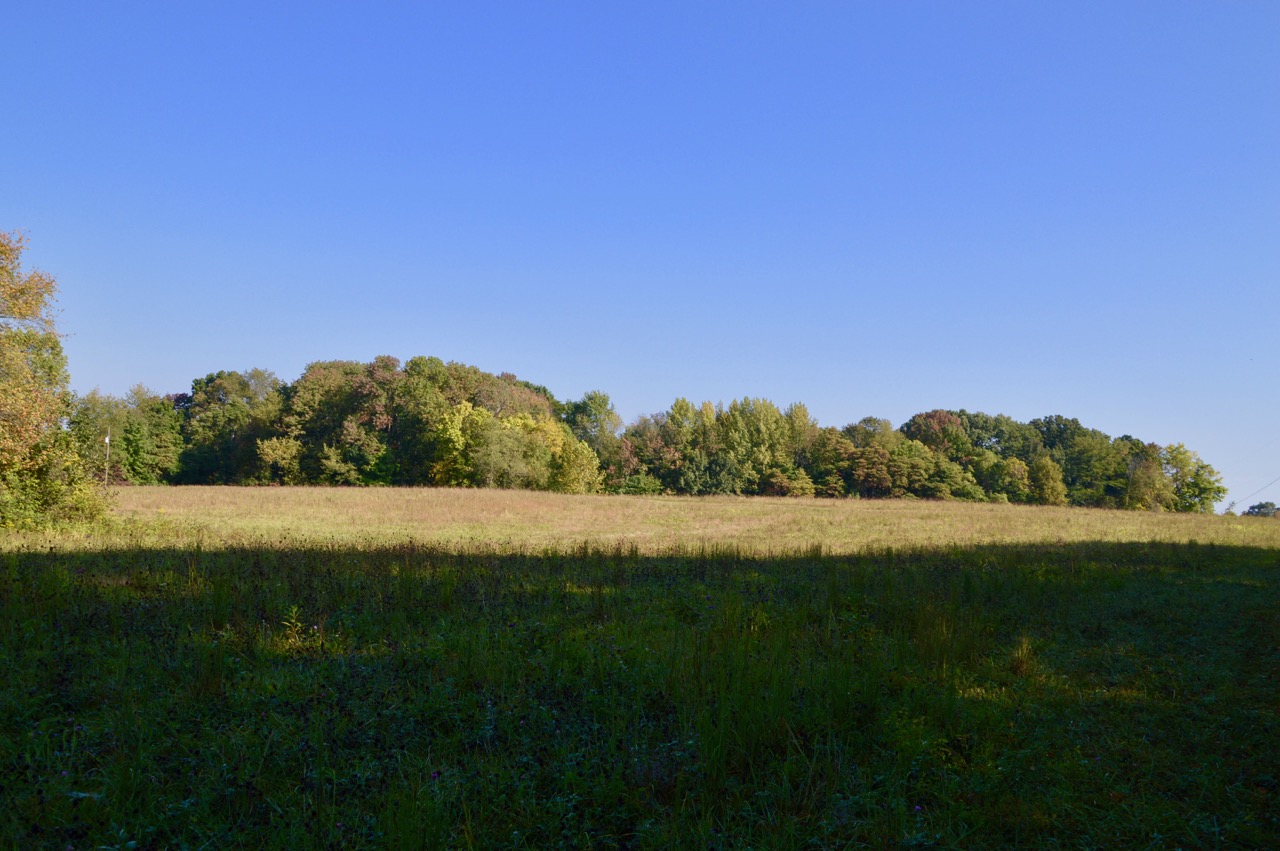 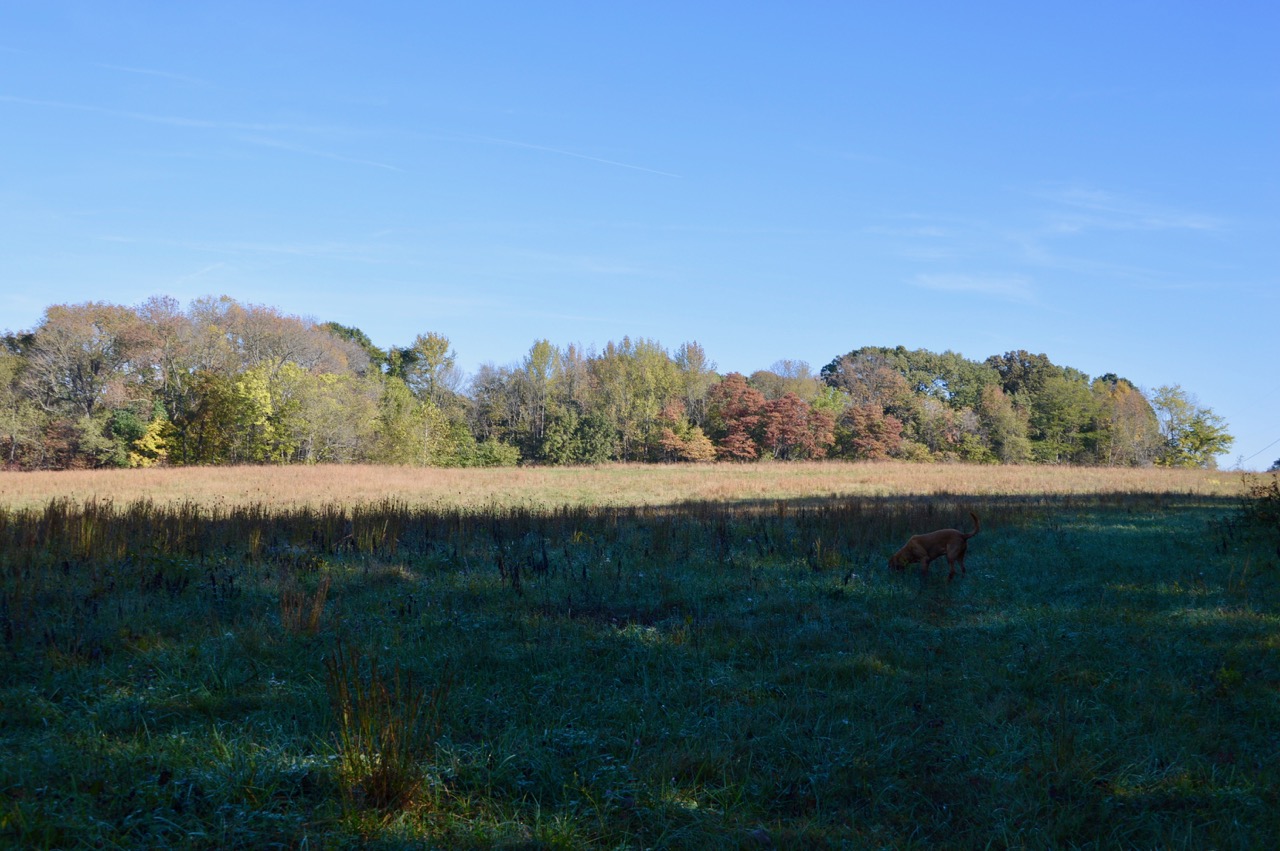 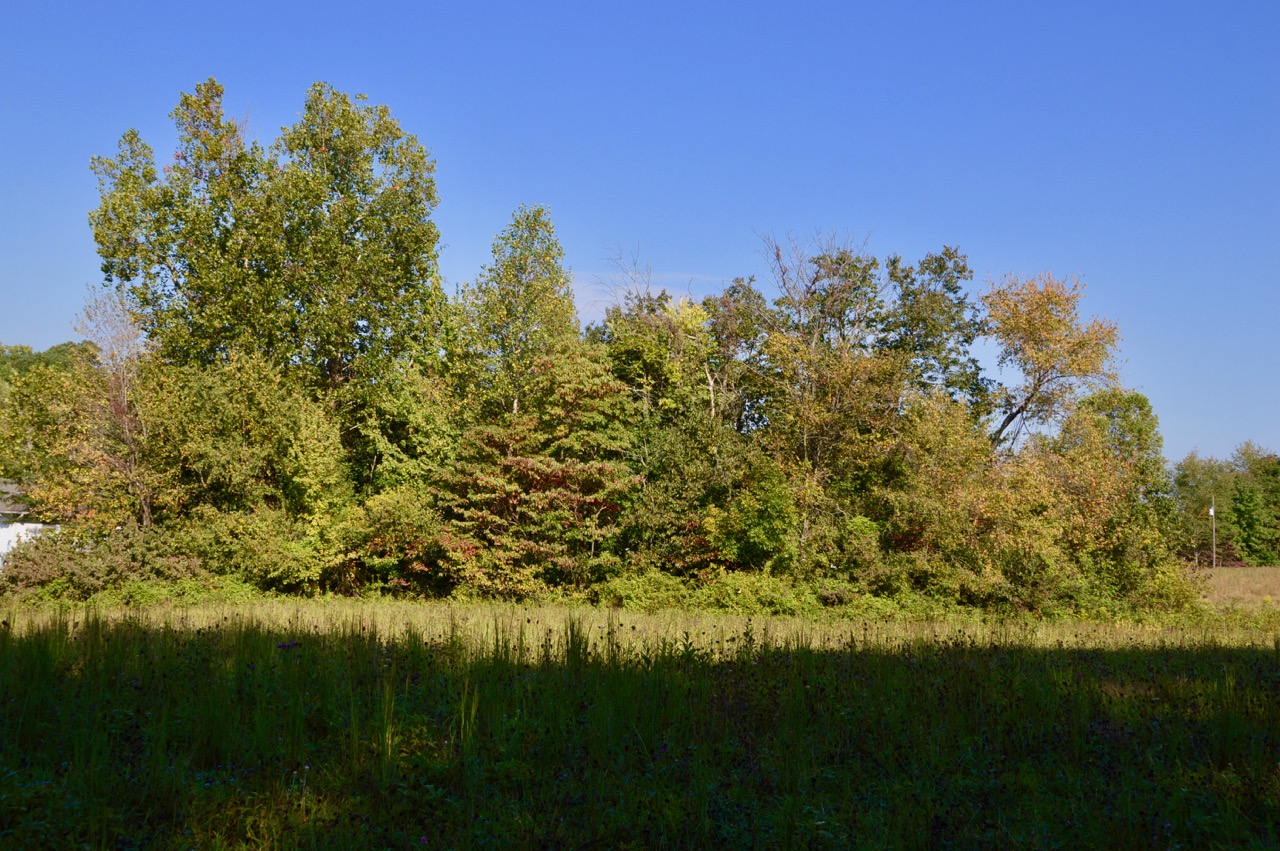 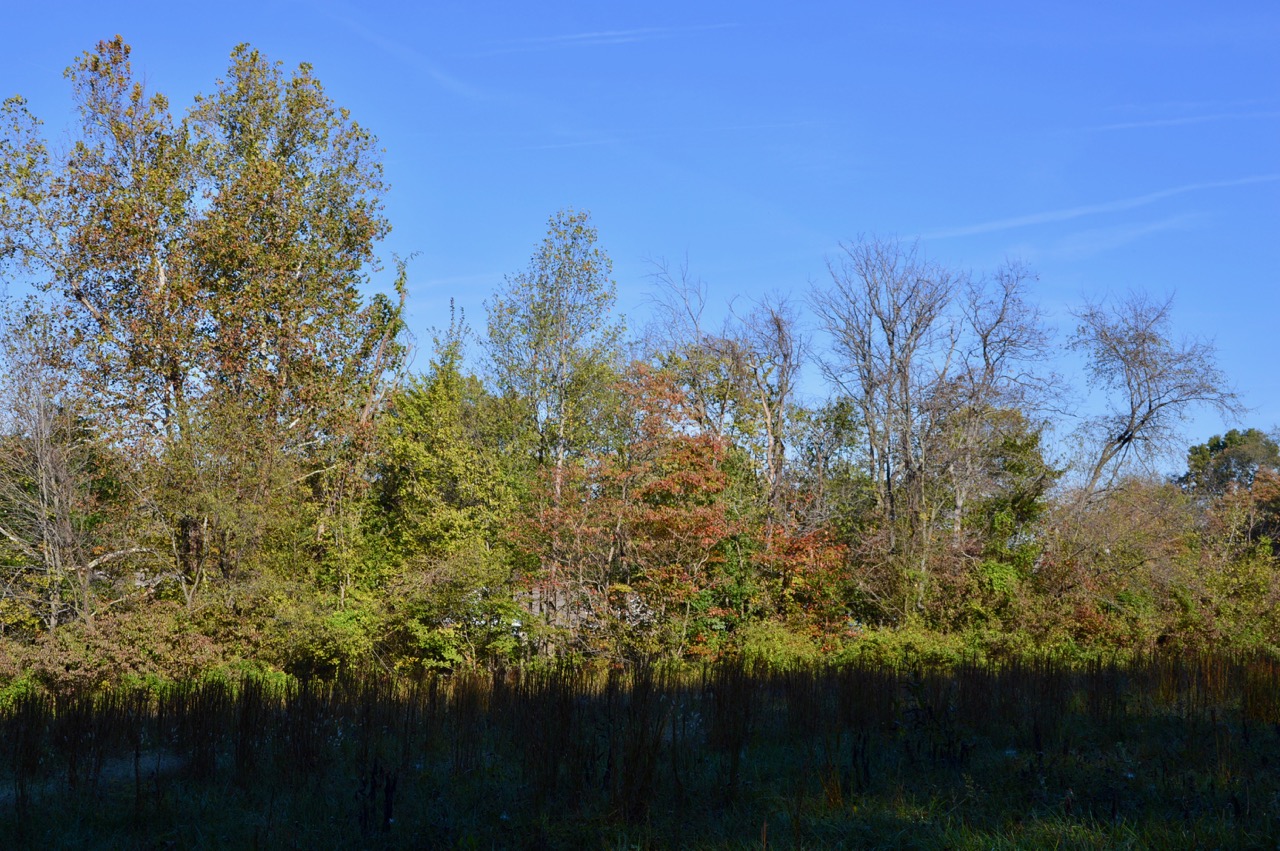 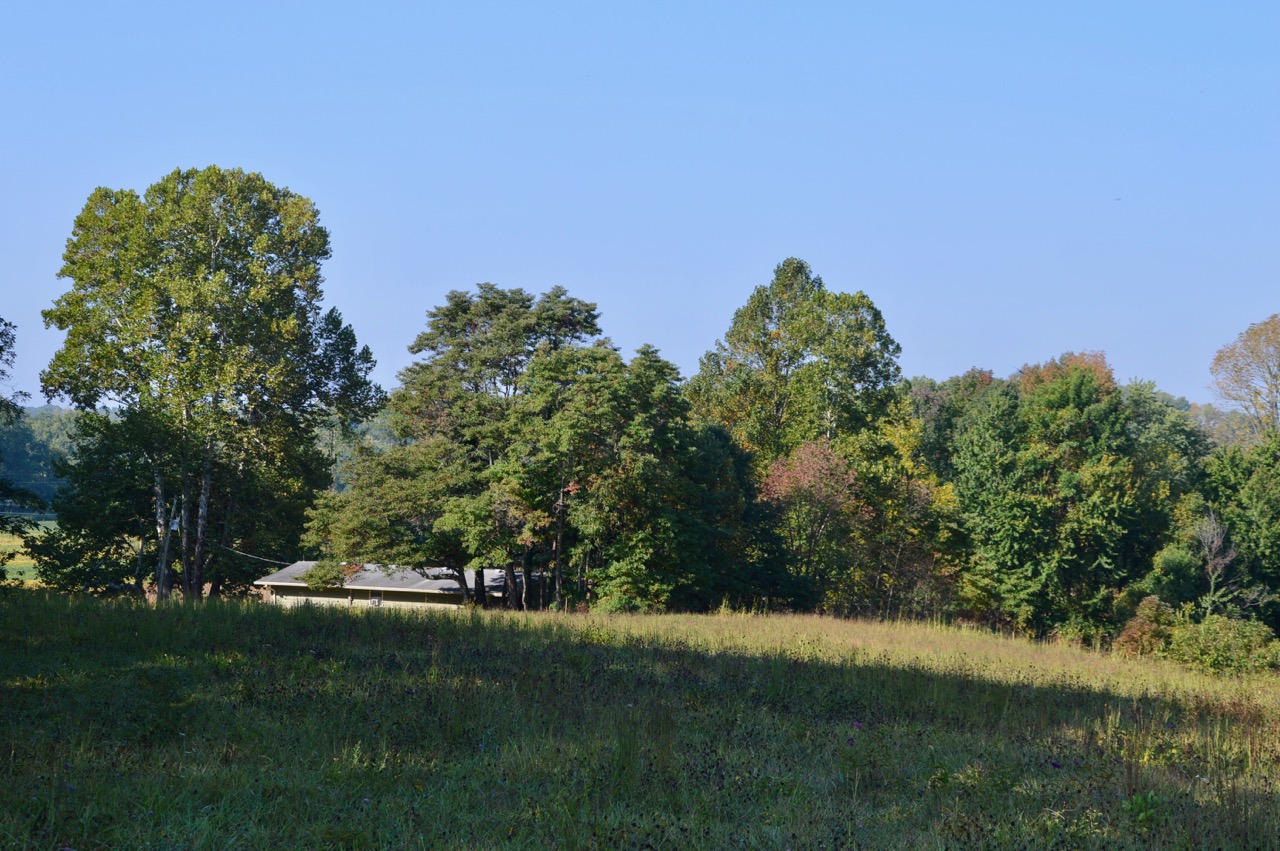 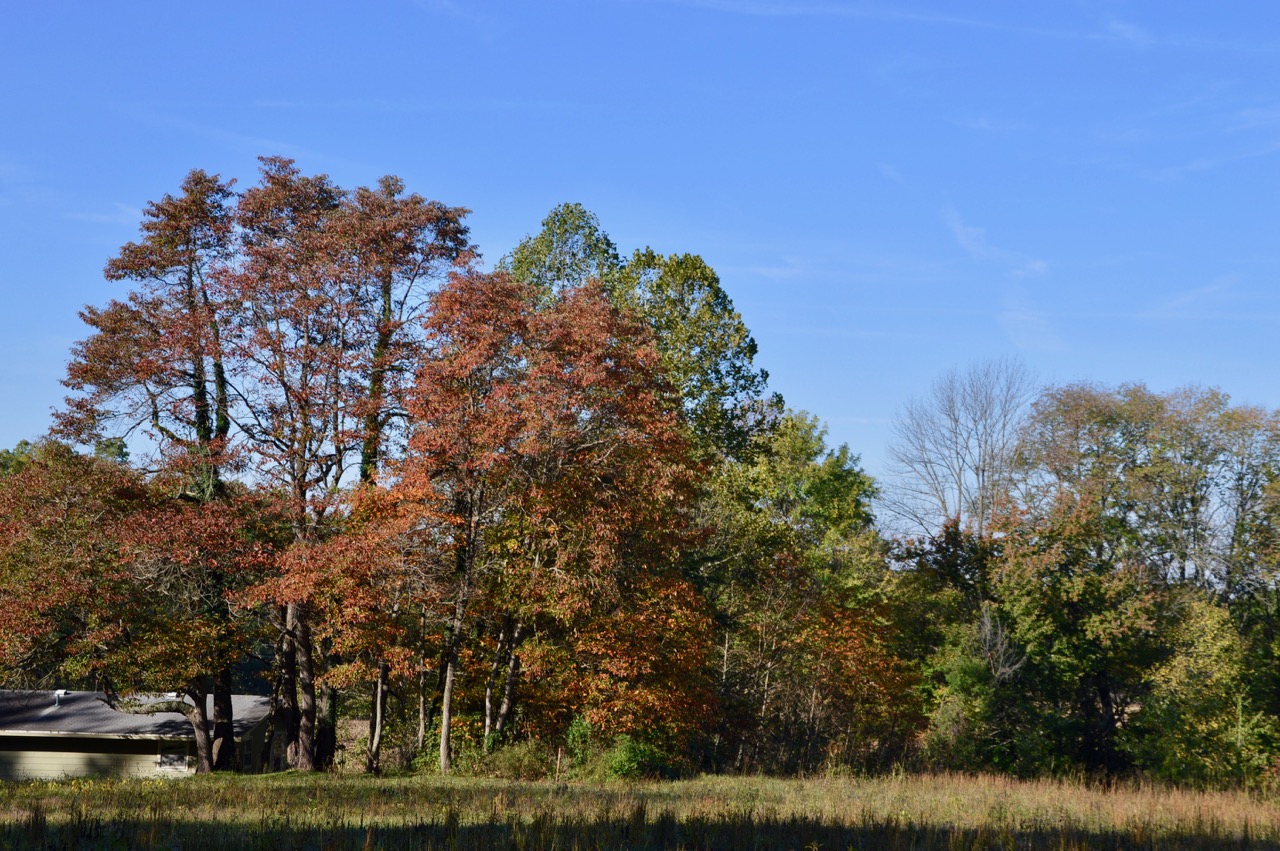 A few weeks ago when I was visiting a friend that has a bigger lot with a backyard that is heavily wooded. He told me he never rakes leaves and mulches them with his mower. I tried that last Friday with some pretty good results but at the time I was having mower problems. I did not find out later my blade had slipped and turned on me after hitting a large rock hidden in the leaves I was mulching on my driveway bank.

Yesterday with my old blade put back on the mower and the rubber mulching shield to block the side shoot ... the mower mulched a lot of leaves faster than I could have raked them. Ill keep doing this until they last leaf has fallen, even if the grass is not tall enough to mow later this month. 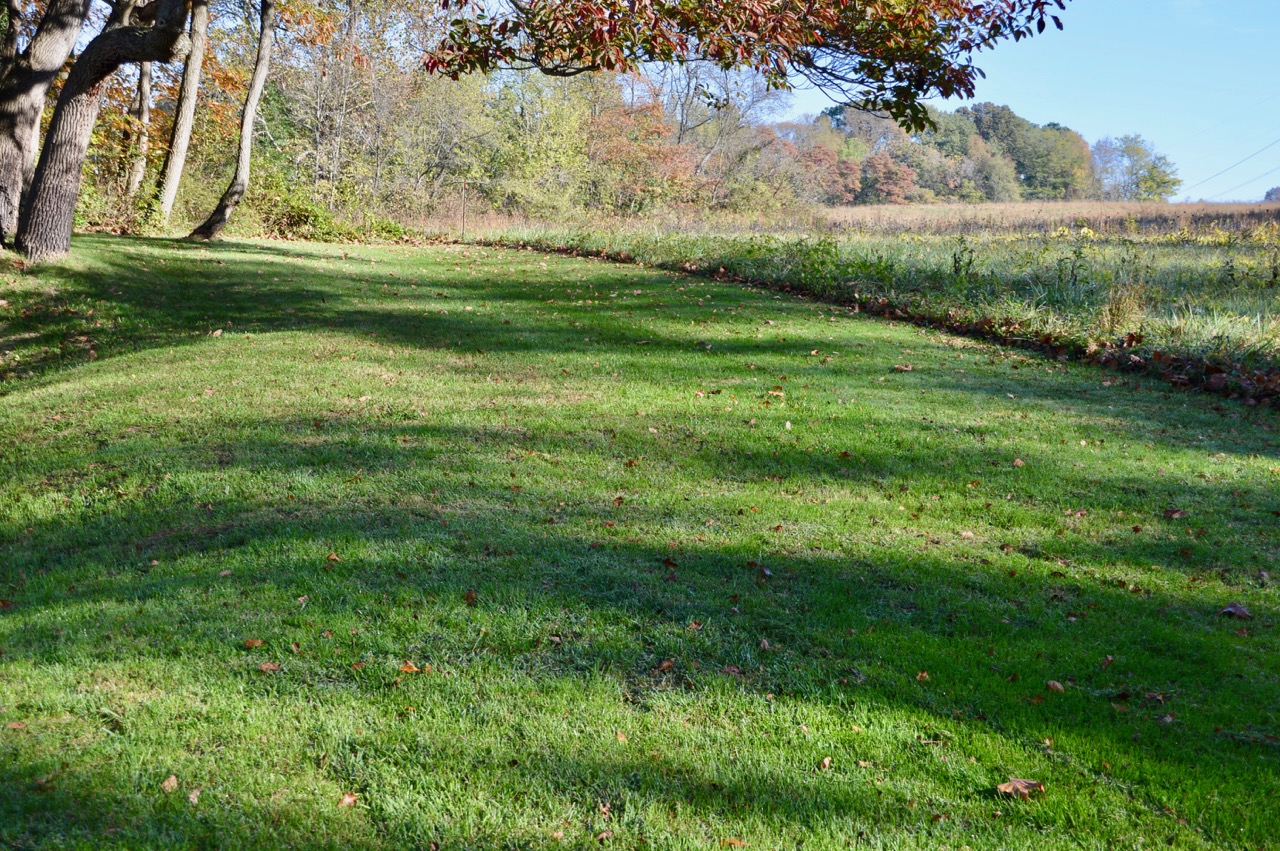 It's another fine morning being retired here in 'the tropics' of Southern Indiana.
at October 20, 2017