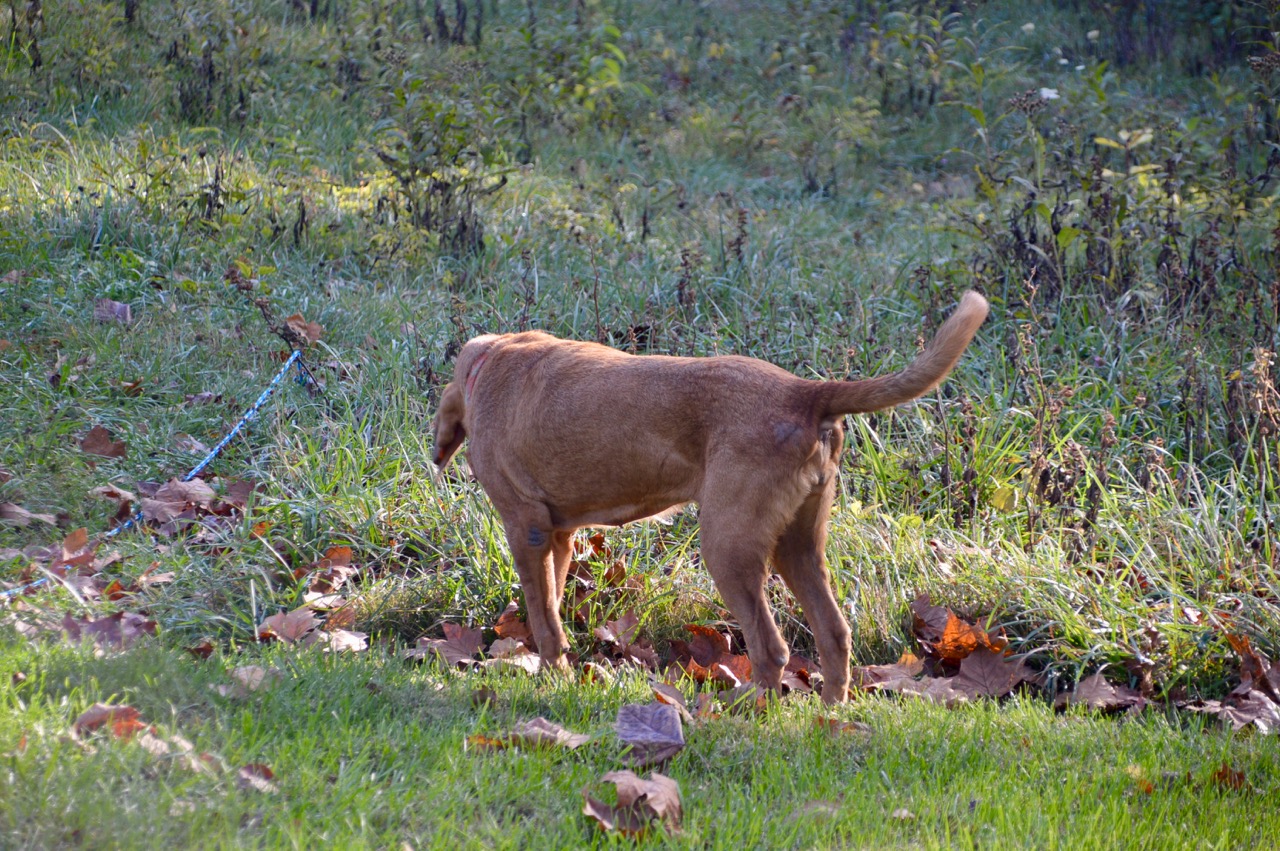 With another late night (early morning hours) with MLB Playoff games, computer work and not being able to sleep ... once again our day started about 9am as I felt a wet bloodhound muzzle poking at my hand hanging over the side of the bed. It was Stella standing there letting me know she wanted her breakfast. Whenever Stella wants something or just stops by to say hi ... she pokes you with her nose.

So it was the normal routine that long time readers know ... coffee, internet reading update then the first hound walk of the day. Stella has been starting her walks lately with a nice snack of wet green grass at the edge of the field. Late afternoon yesterday as she and Sadie roamed the field while I walked around mashing down fresh mounds of grass developed by the mole traffic ... both hounds picked up a lot of these small burrs that are on every dead, dark brown weeds you see in my field pictures. 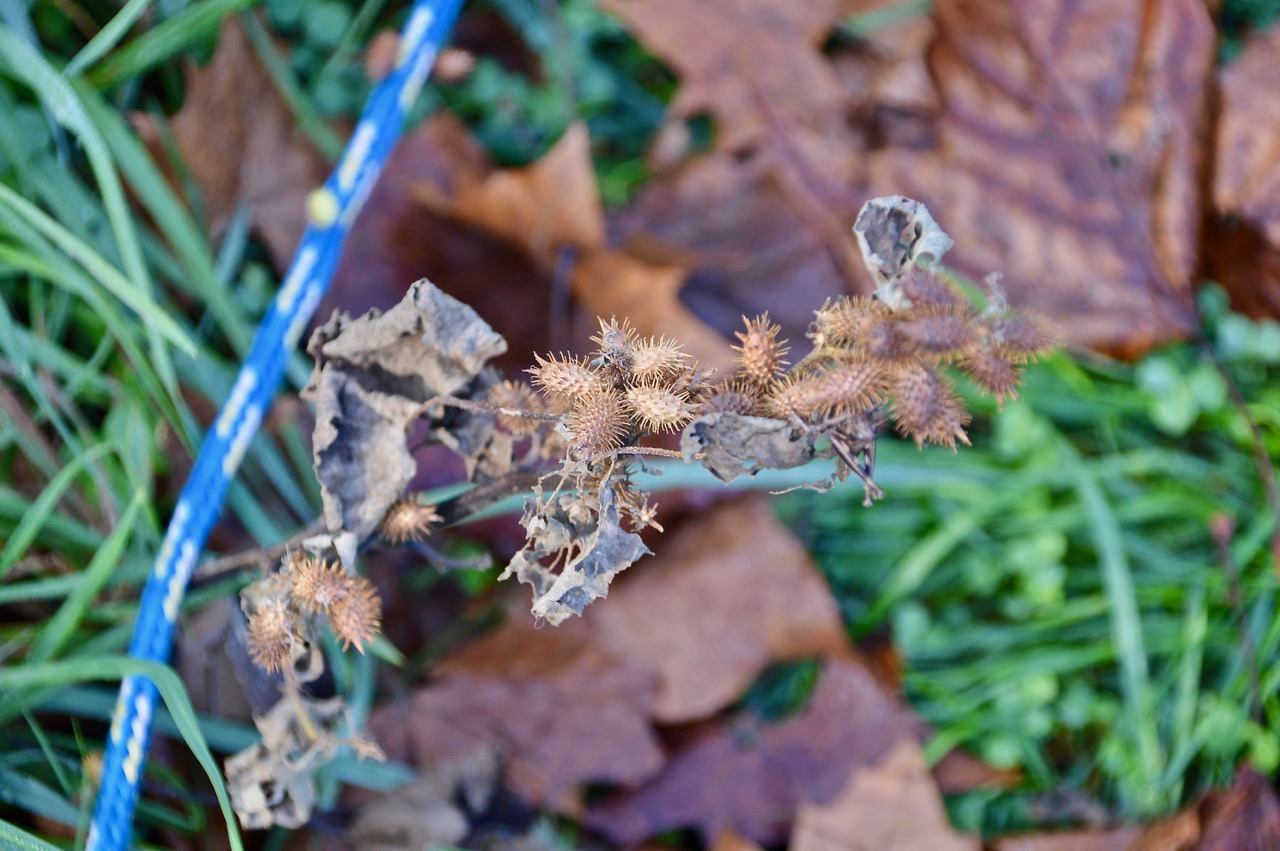 They even stick to my jeans sometimes as well as my fleece gloves when it gets colder. It's one of the hazards in the years they do not mow the field for the second time before winter. The hounds don't mind them but I am not a fan of pulling 3-7 of these out of each hound's coat after each of our 2-3 walk per day. No matter what, with perfect temps this morning at 61° we were off for the first walk of the day. 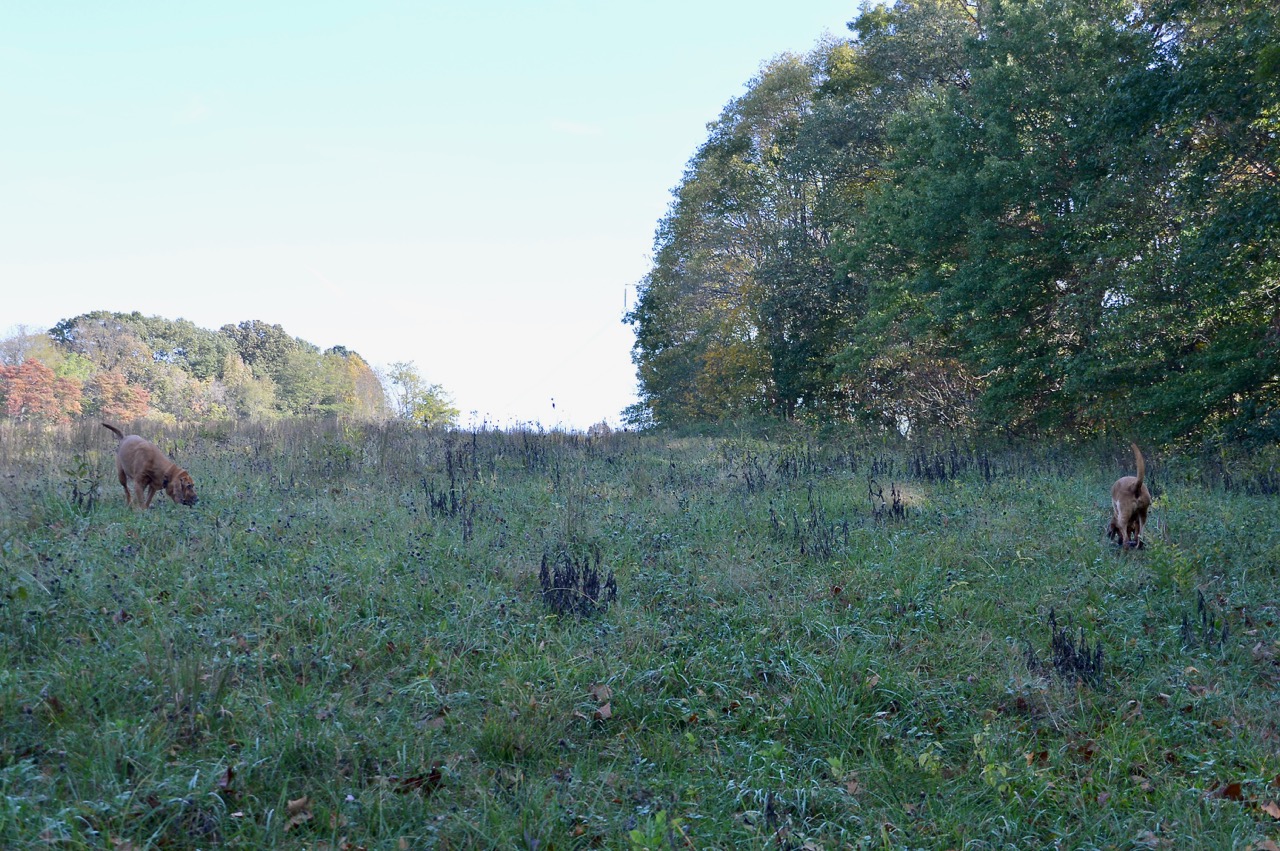 Stella was going to get all the freedom she wanted this morning but again she was more than happy to follow along with Sadie and I ... just as long as it was at her pace. When you see the excess skin slide down over her forehead she is in deep concentration trying to identify what her nose has picked up. No diet supplements today for either hound ... just straight pure scent tracking and identification. 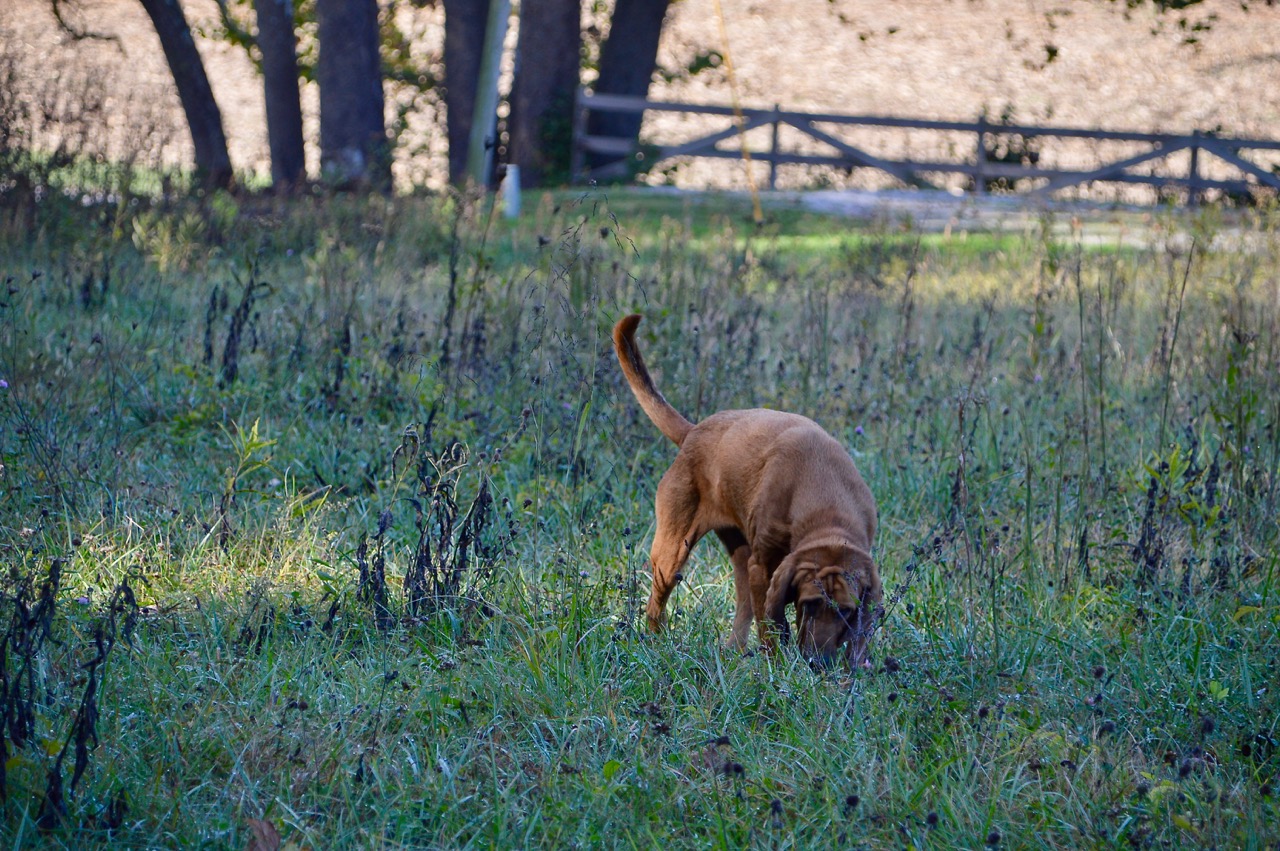 It's good to see Stella back to her old self. She has not done the full-speed sprint she use to do but it's good enough just to see her have the ability to run faster than a trot. It's hard to think sometimes about how each hound is basically the same age at 8 and 9 years old. It's part of dog ownership but it's always hard to deal with old age issues when they happen. 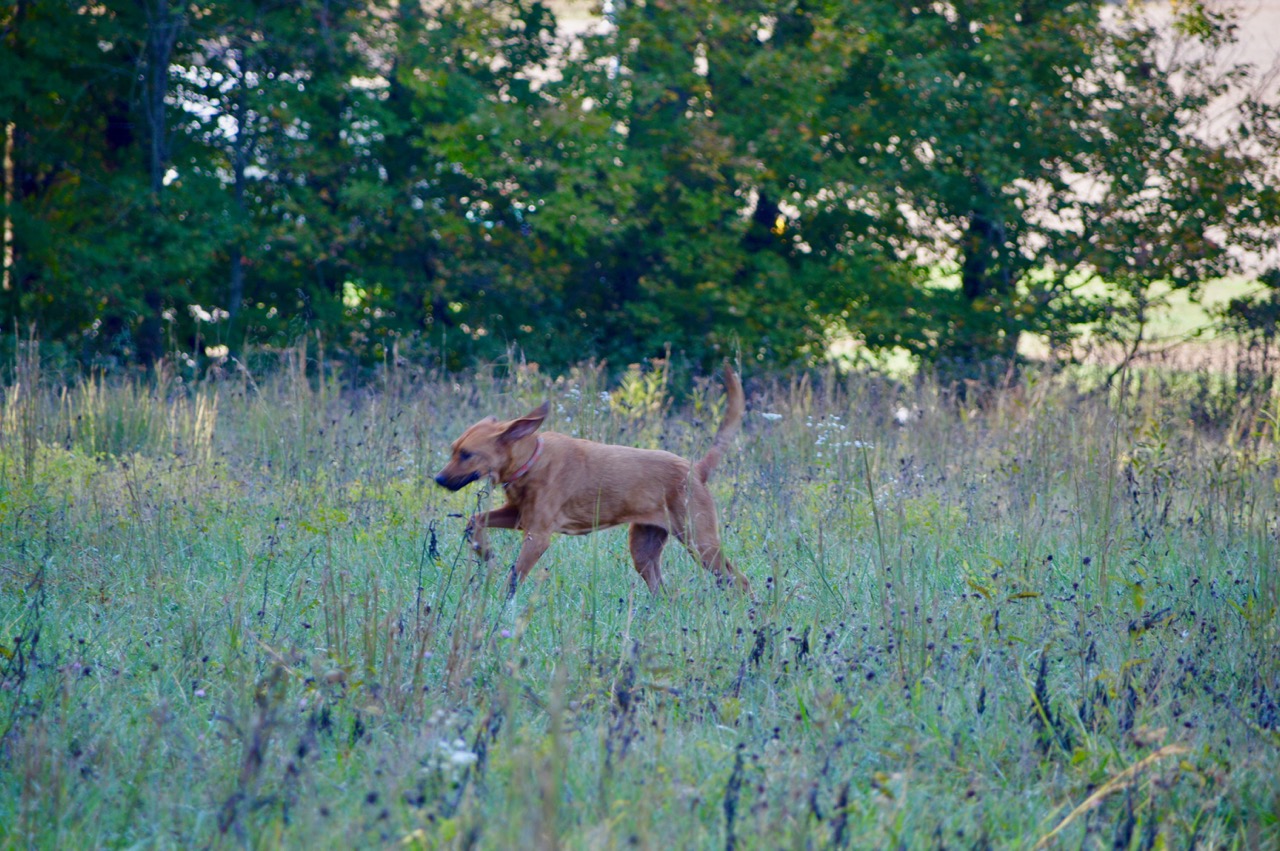 With her ears flapping and going in directions that few breeds can match, it wasn't long before she ran by me with her non-intentional act of taking out my knee with a 'chop block' or 'clipping' that NFL players are penalized for. There is 7 acres of field around me and she has to run into me ... LOL 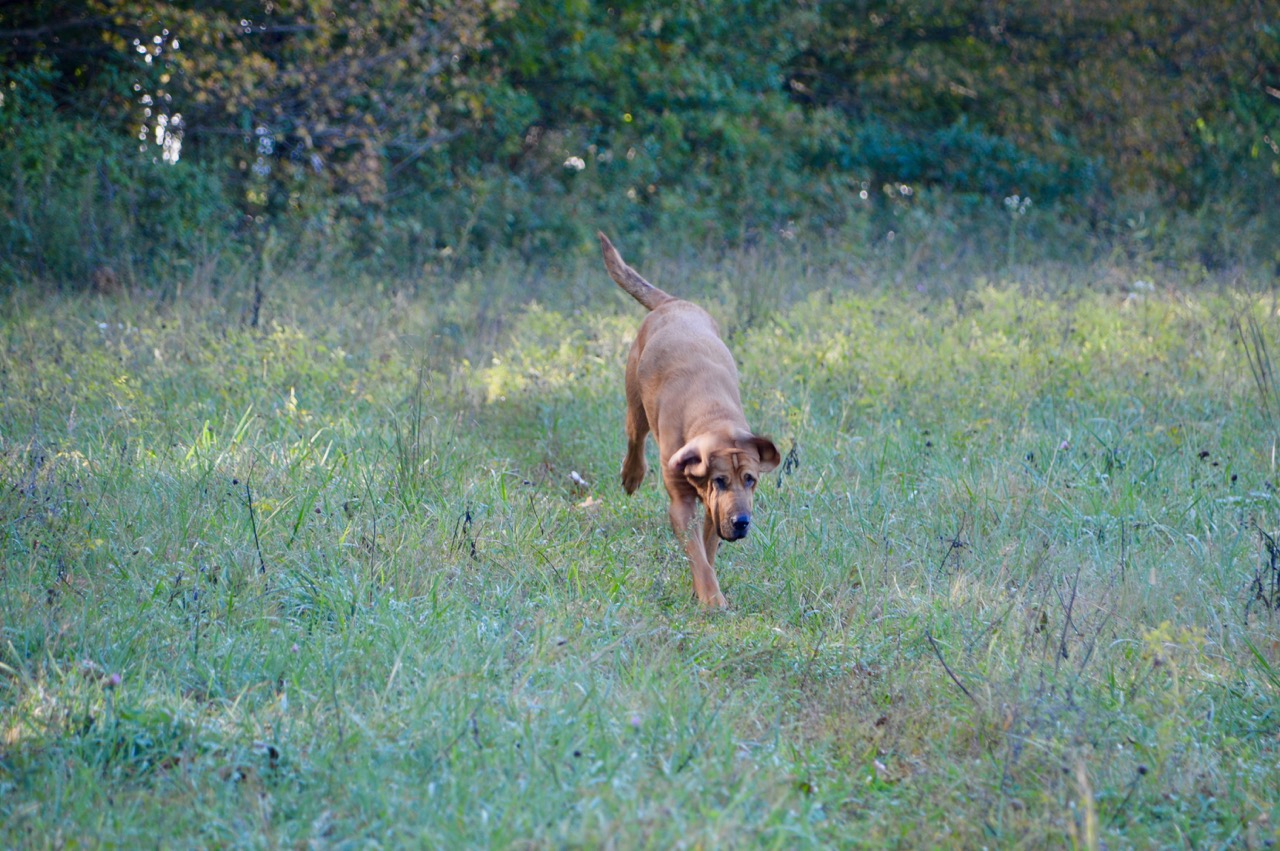 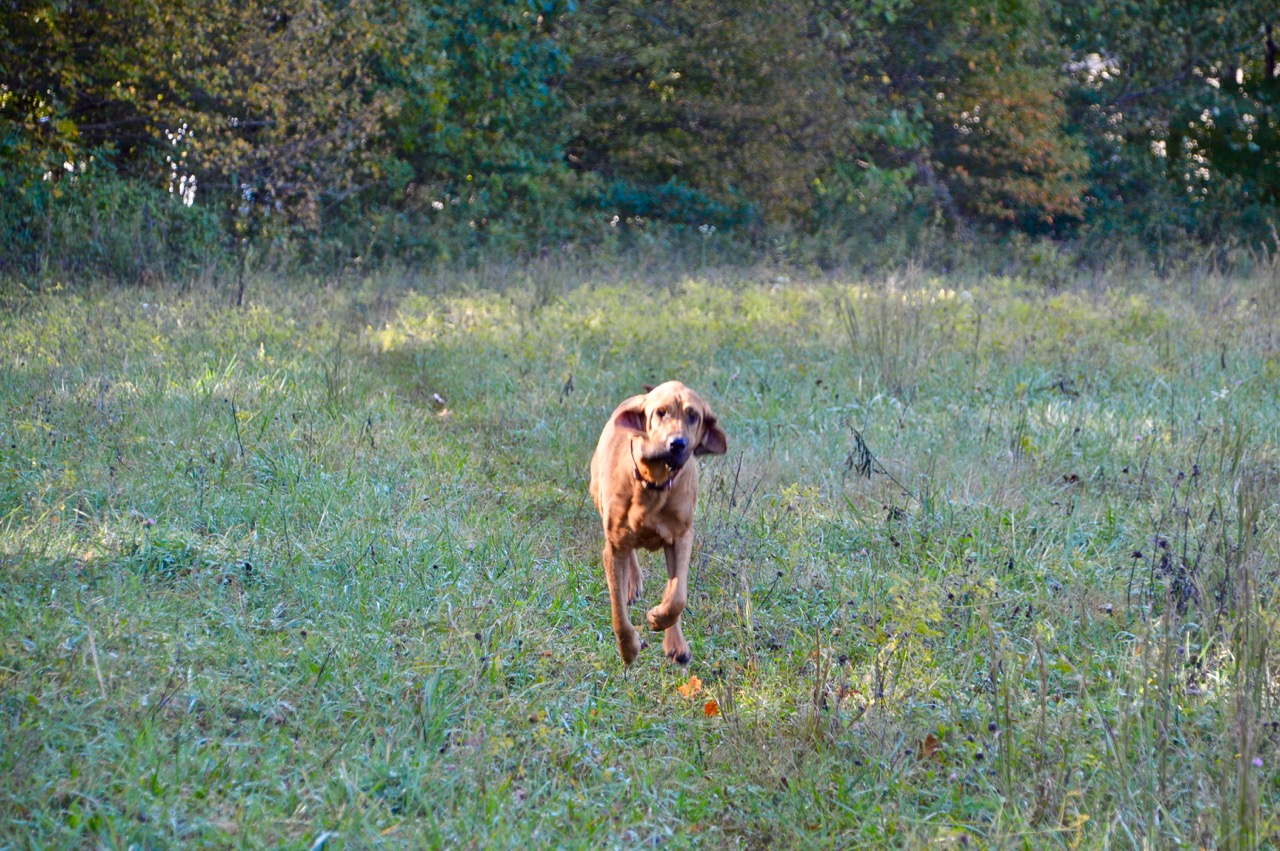 While the hounds headed west away from the woods and before the first turn ... I heard something running in the woods to the right of me, something big enough that was breaking tree limbs as they made their escape. Obviously the animal escaping had a better nose than the two hounds pictured below. Maybe they had programed their noses for only certain kinds of animals. 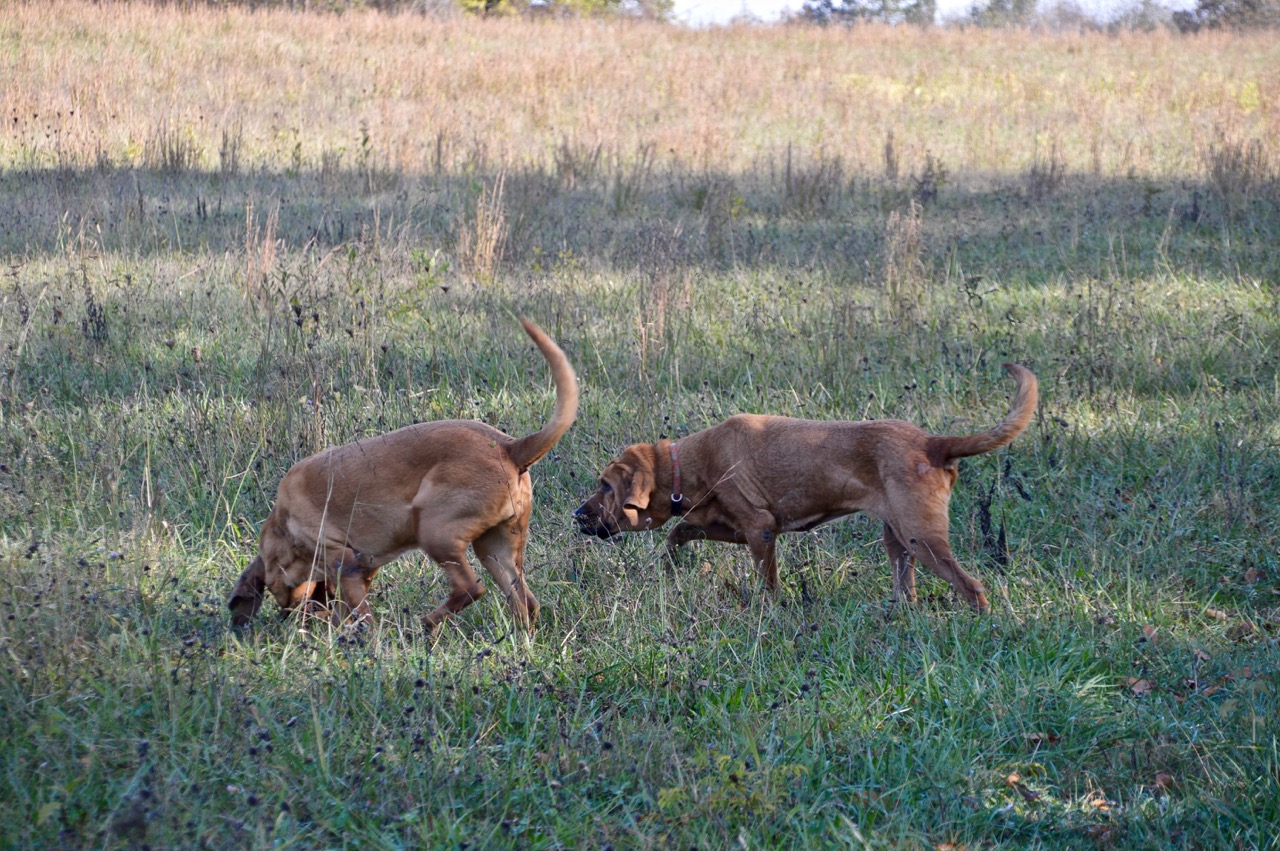 As I walked the normal path I noticed my jaw was not hurting this morning, just like Wednesday but I had the strangest feeling on my lower side of my lip ... on the right side ... same side as the pain on Tuesday. The lower right half of my lip felt like it was in the early stages of numbness after a dentist shooting you with a dose of Novocaine. How strange is that? 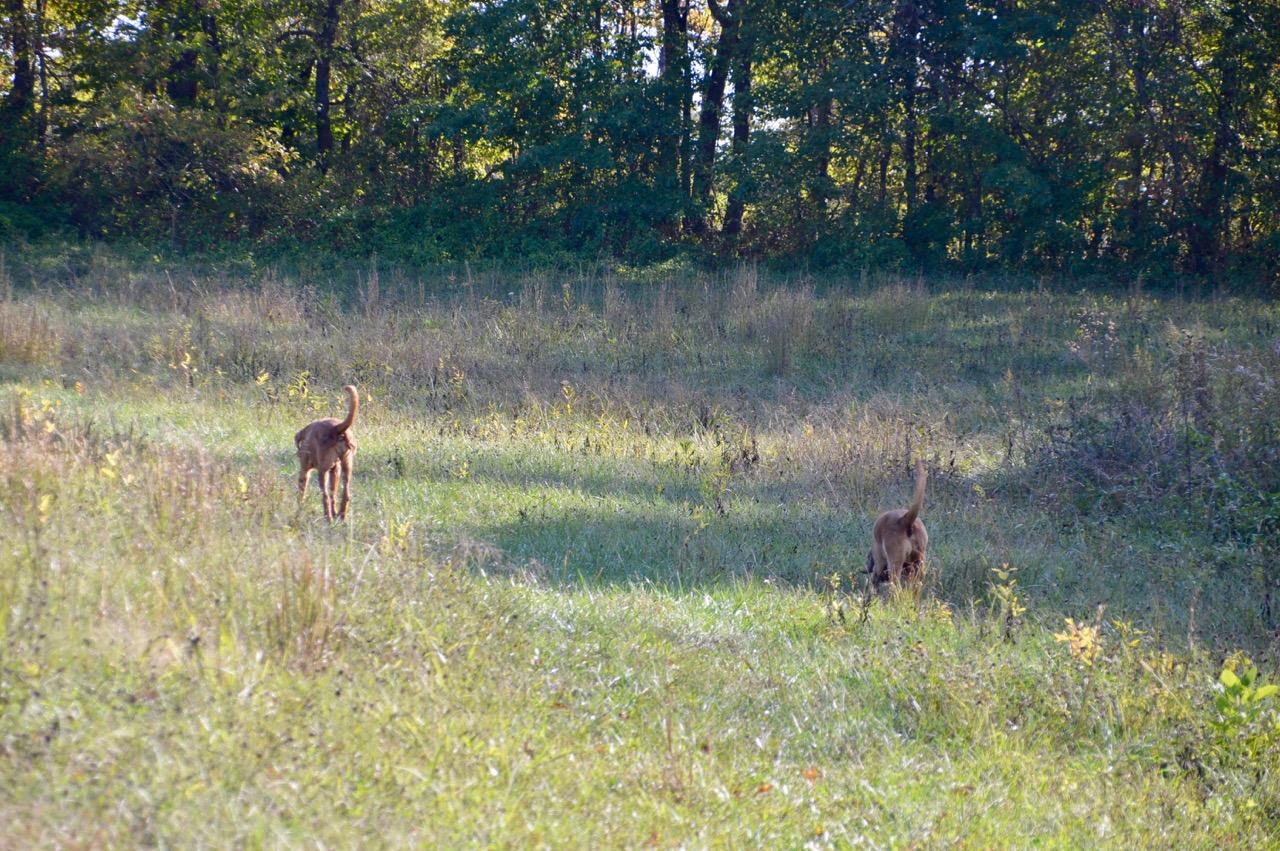 There was no need for me to march up into the far right corner of the field to get the hounds moving ... they were on a fairly fast pace along the back edge of the field. No deer in sight but they didn't know that. By the way they acted you would have thought their noses were only a few minutes behind the latest deer. 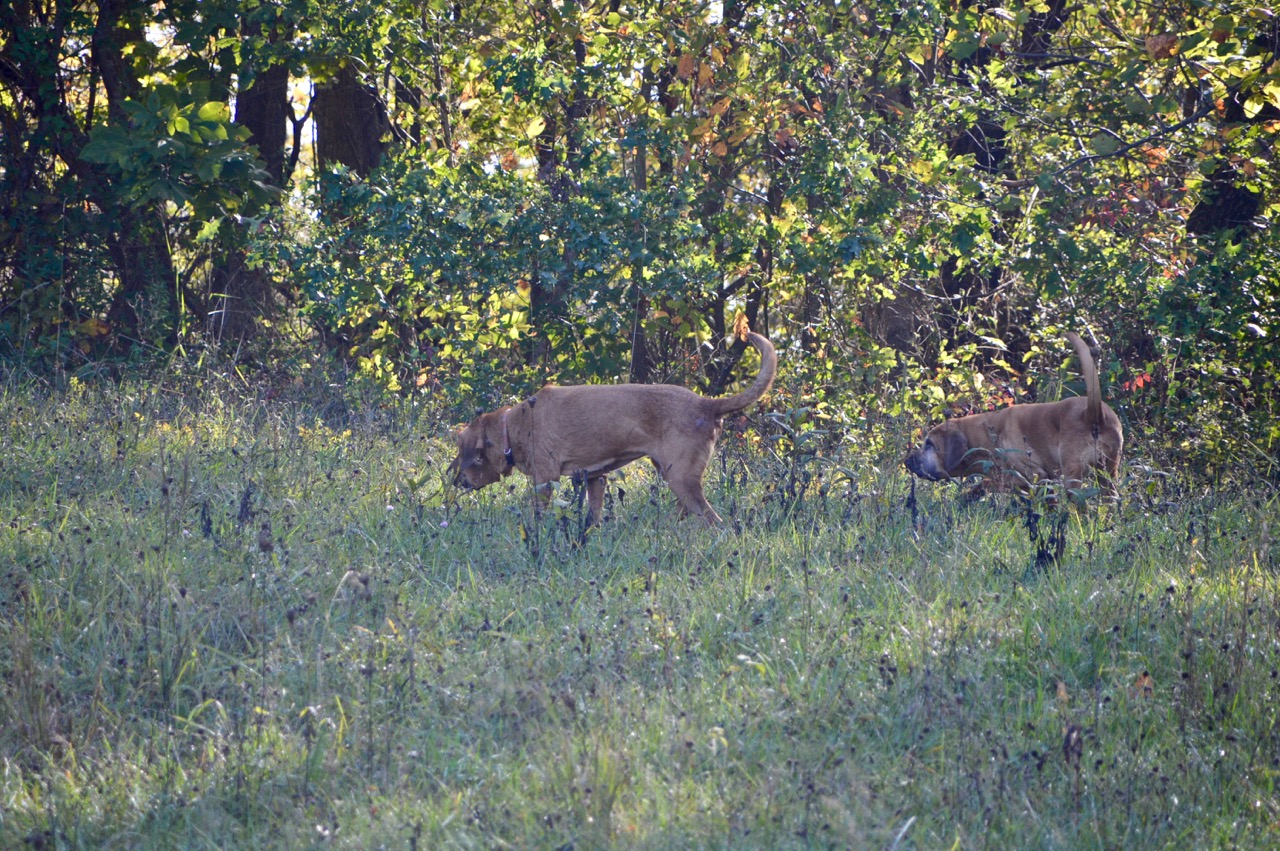 Sadie trotted though the taller grass. 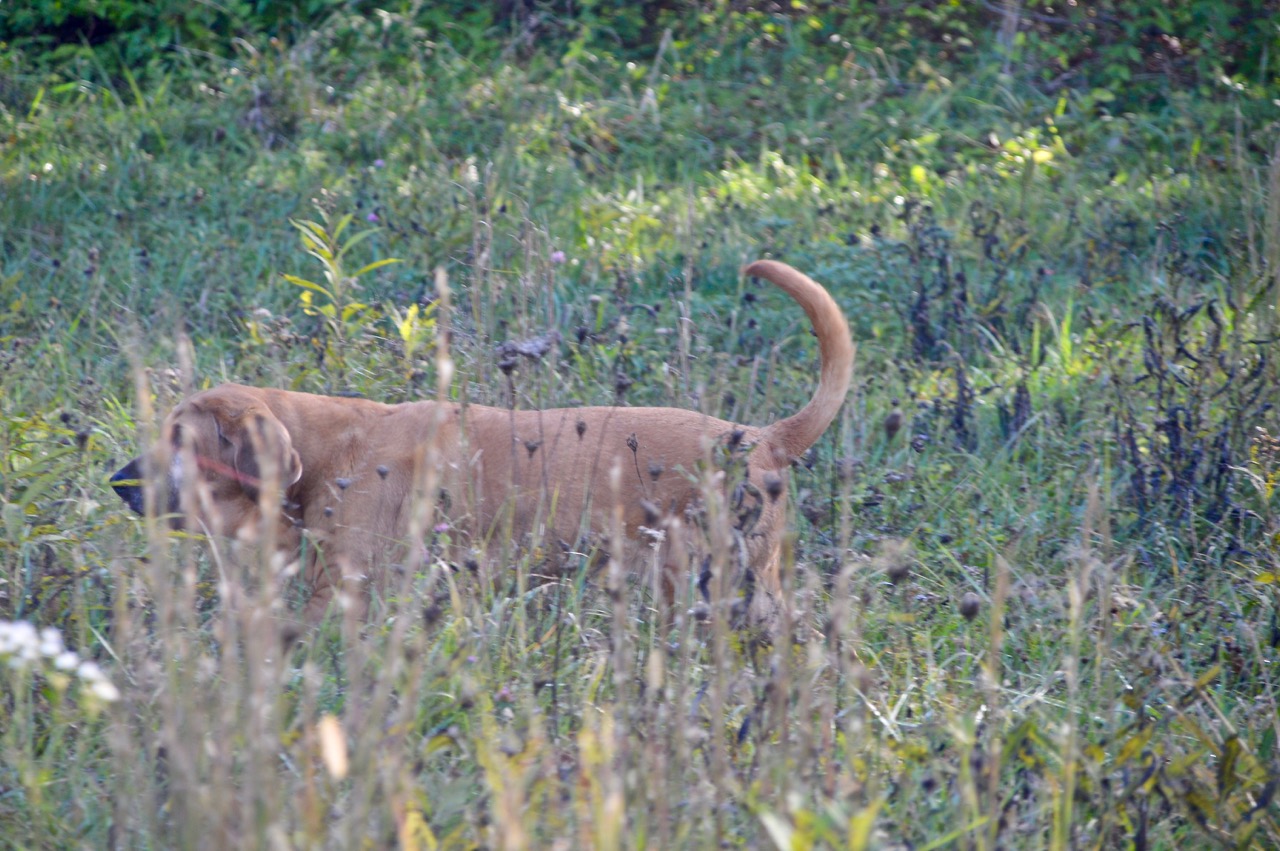 You could tell she was on to something important and totally focused. 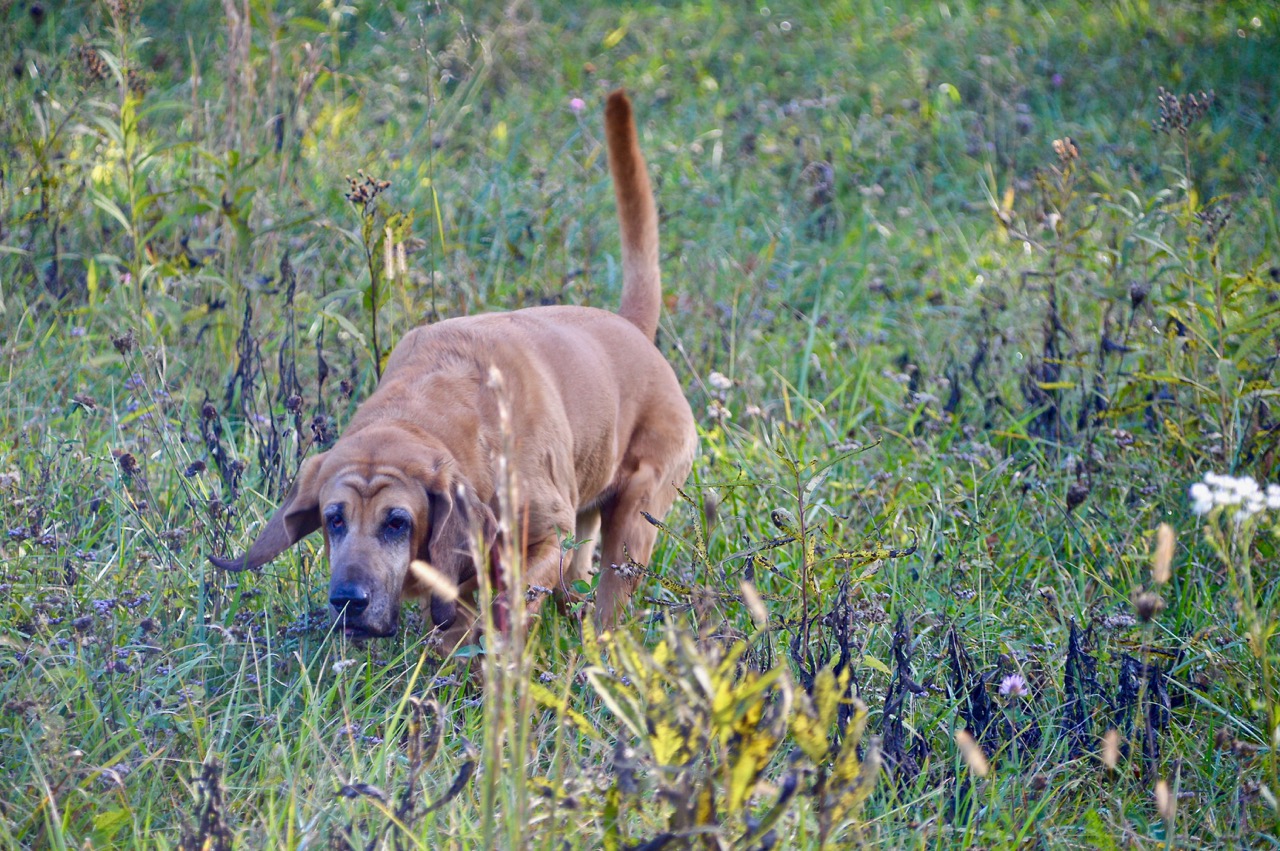 Same thing for Stella but she was gradually heading in a different direction as usual. 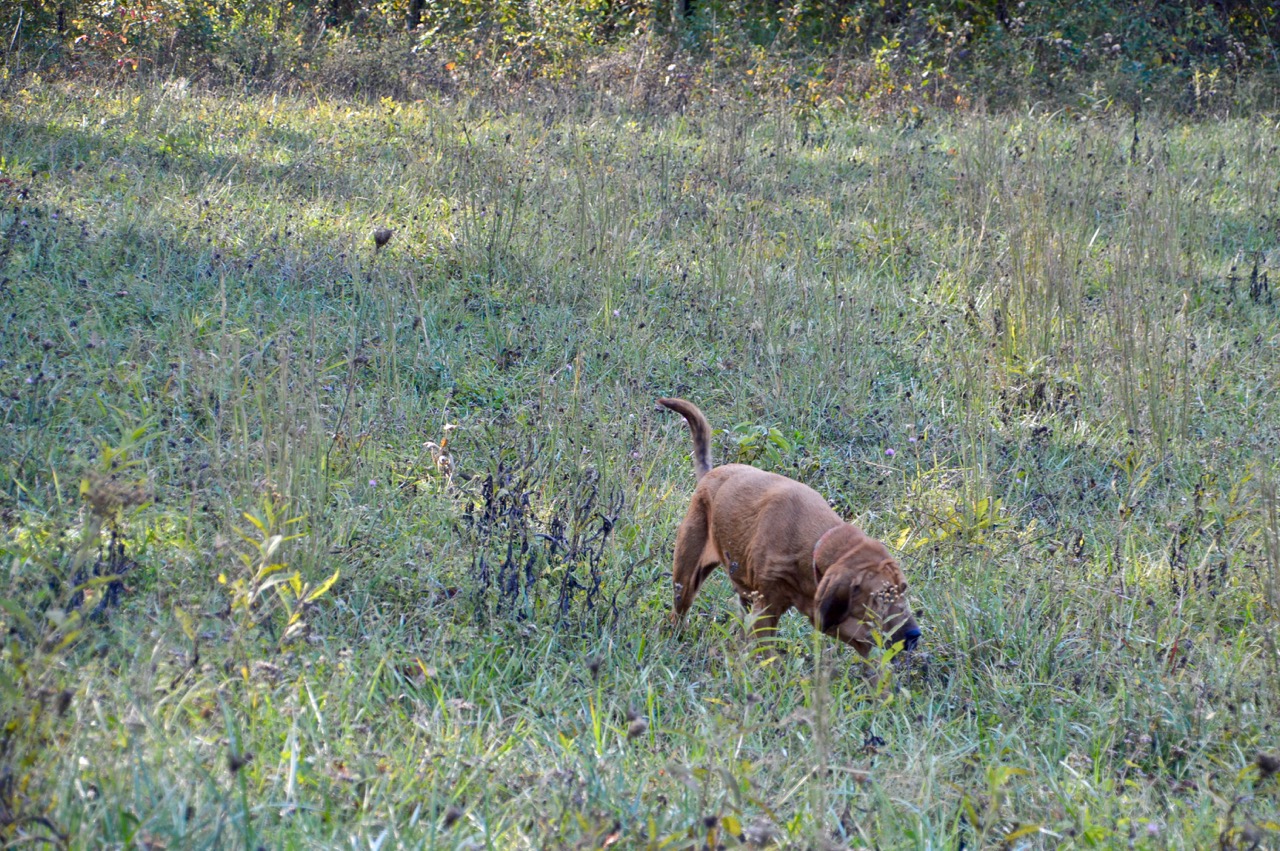 She trotted back to the larger path made by the ATV and I was almost certain she was going to try to escape right before my eyes. She hit that path, headed north and picked up her pace. 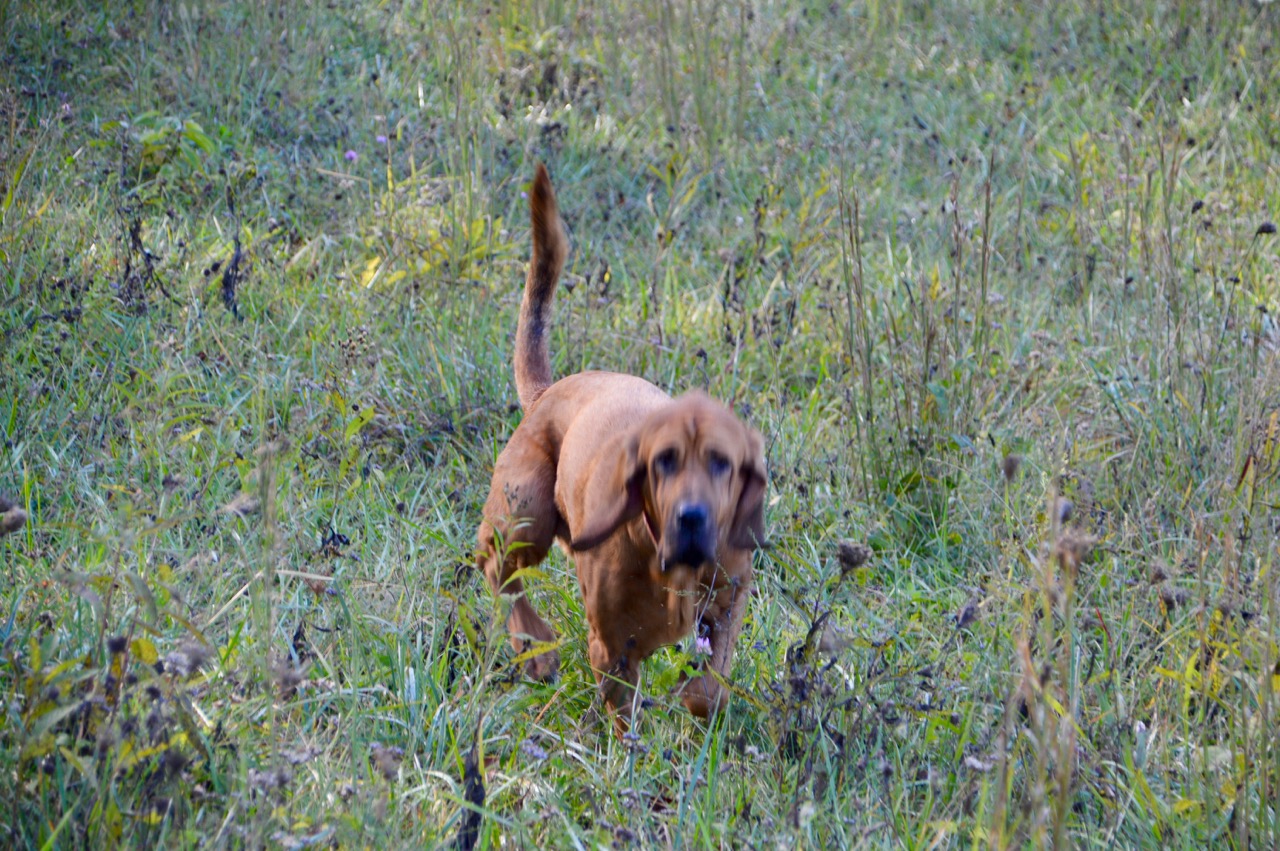 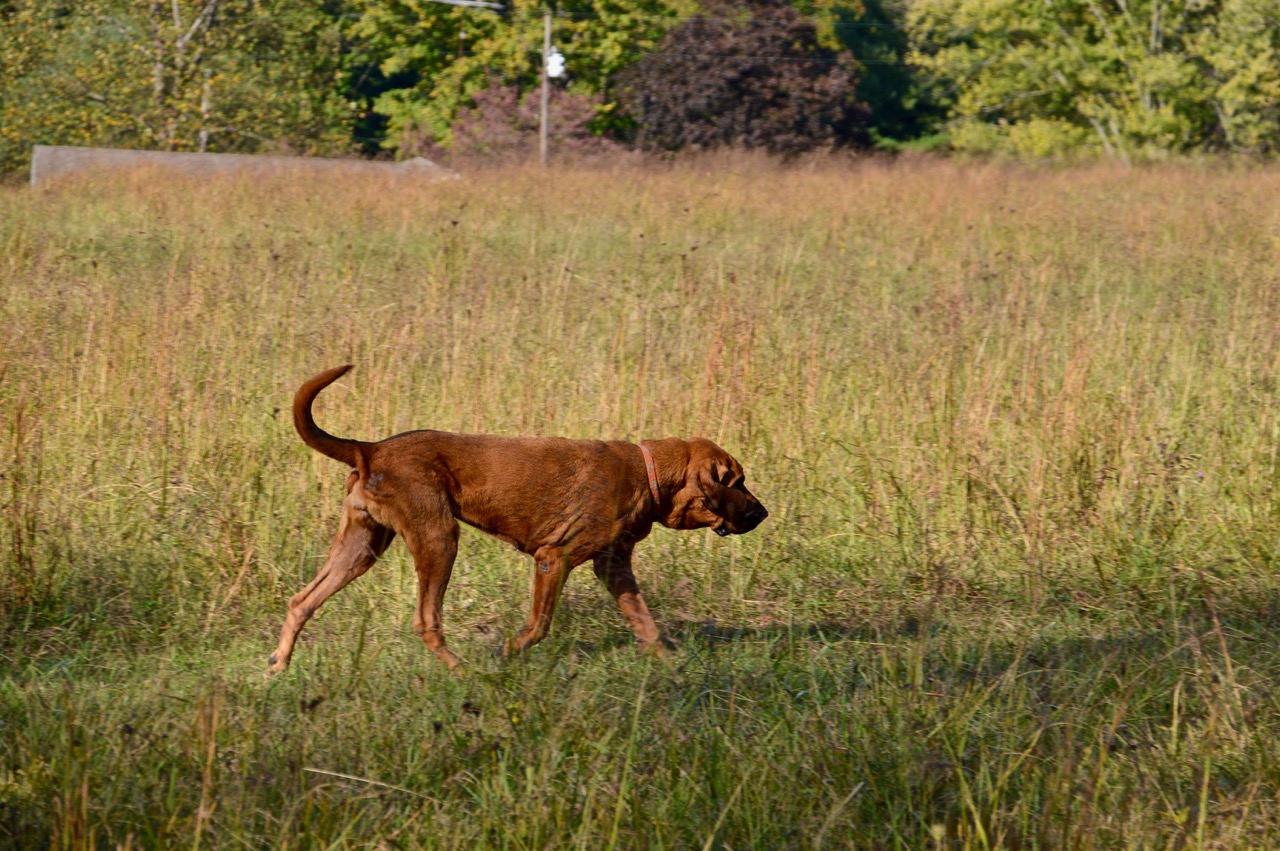 I had not said a word when she abruptly made a left turn on the path home and was joined by Sadie leading the sprint out in front of me, leaving me behind once again. The weather was so nice I wasn't running anywhere so I continued enjoying my walk. 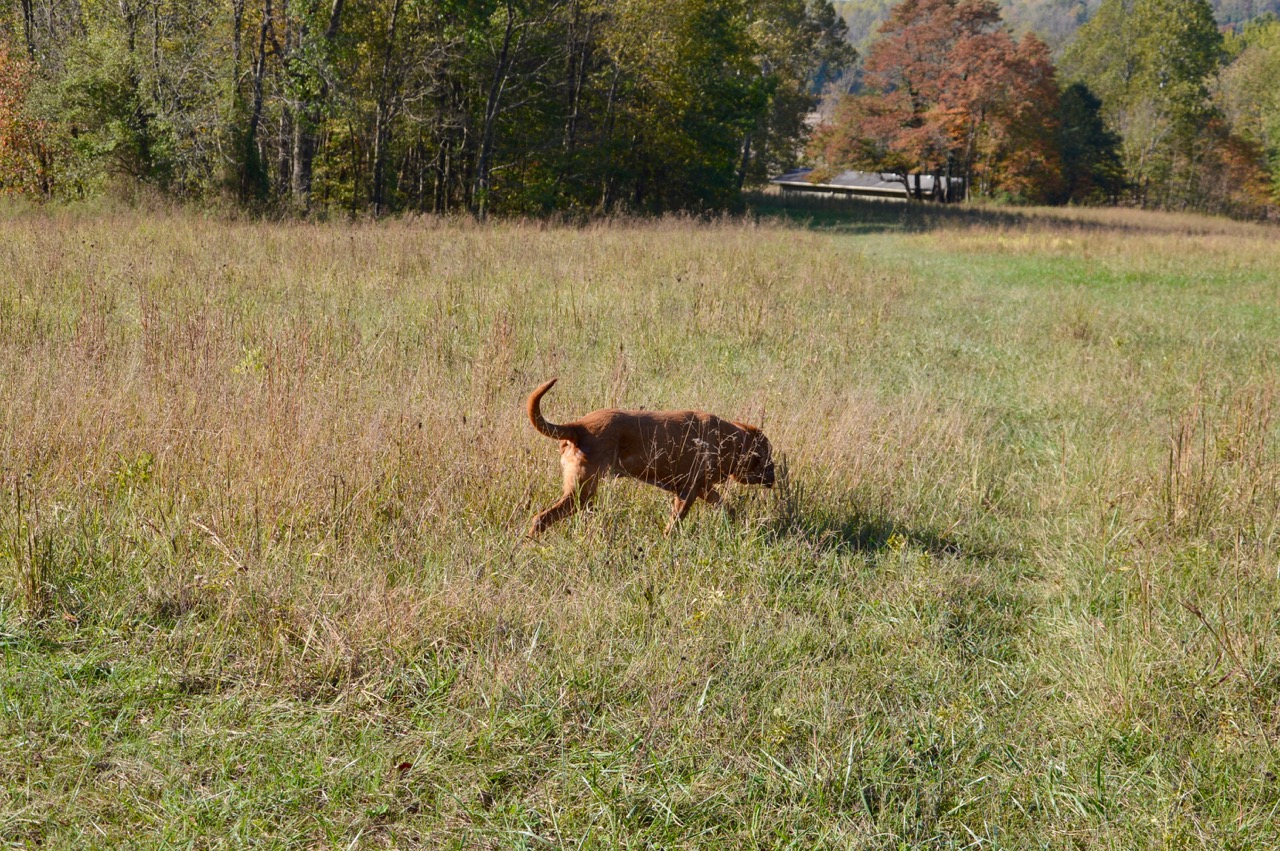 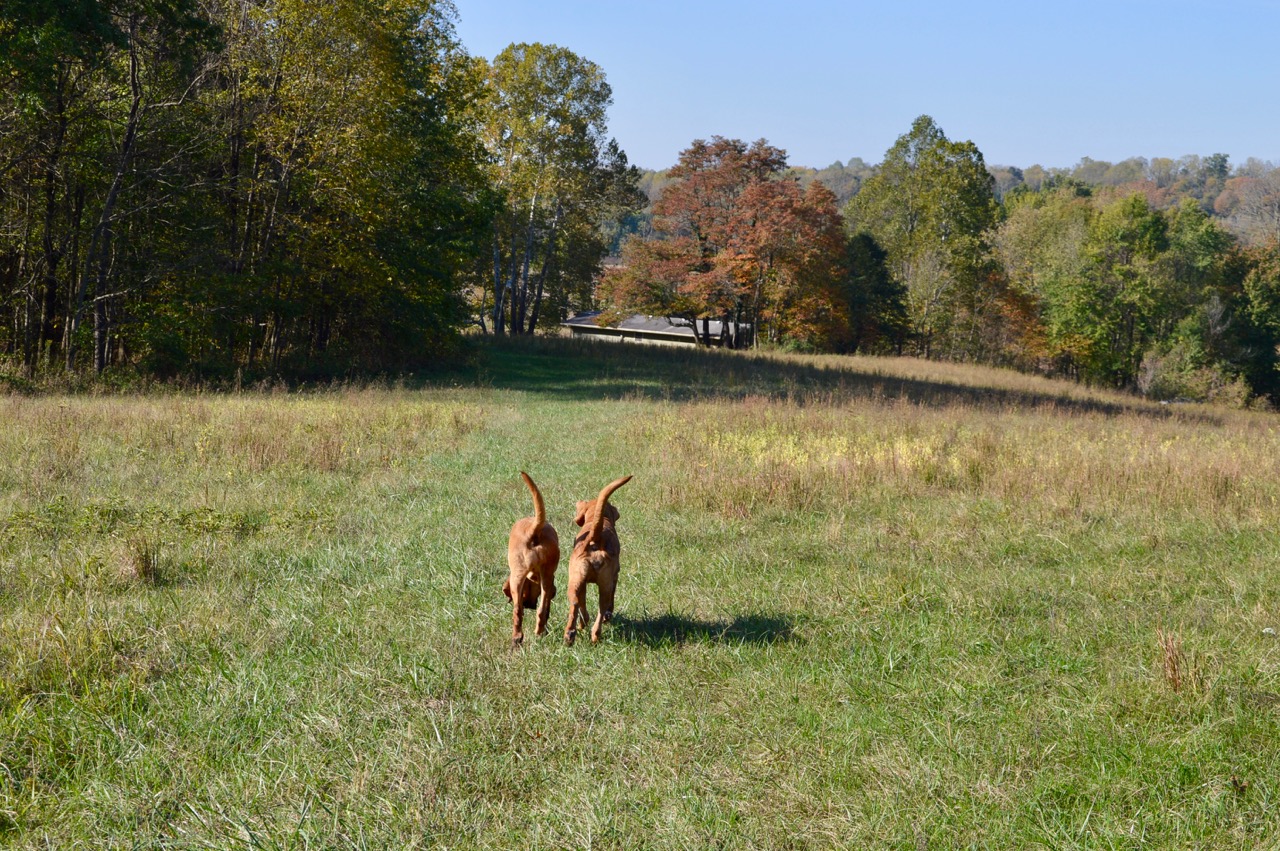 The picture of this hound compared to last February or March is an amazing difference. No ribs are showing and her hip bones are not prominent, looking as if she was starving. The vet at the time thought she might be having problems processing the protein in her kibble and told me it would take a long time for her to regain the weight, if nothing else was wrong. 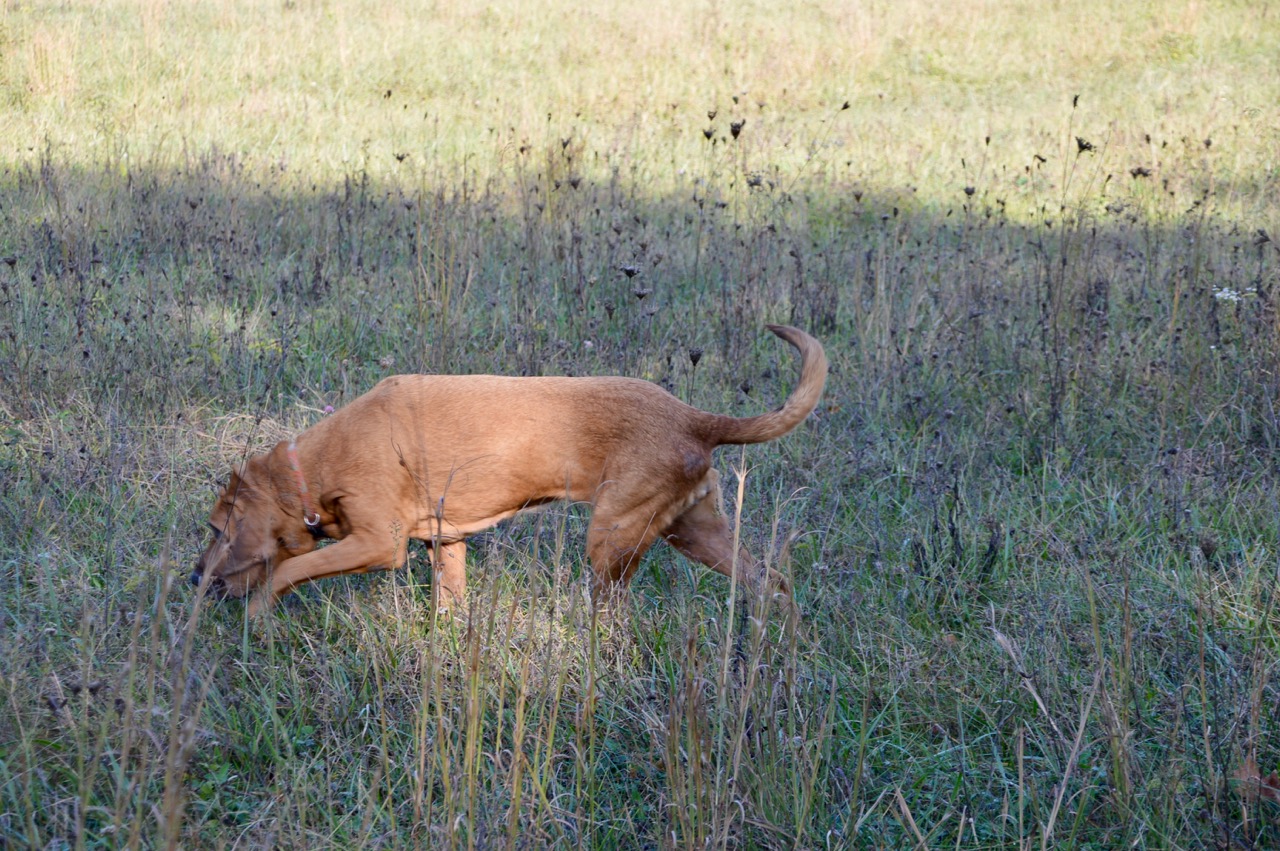 They were searching all the way up to the yard and Stella was going to get every last drop of her exploration this morning. 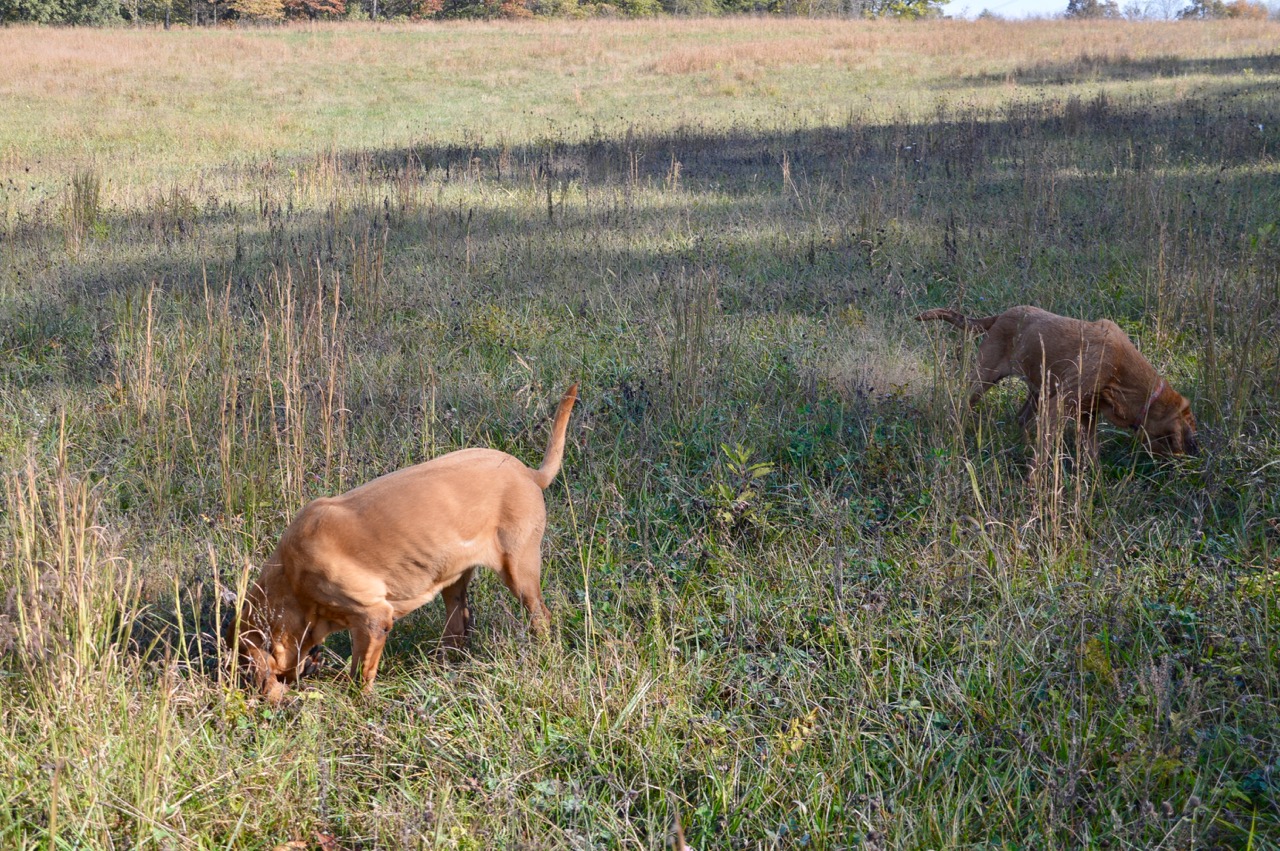 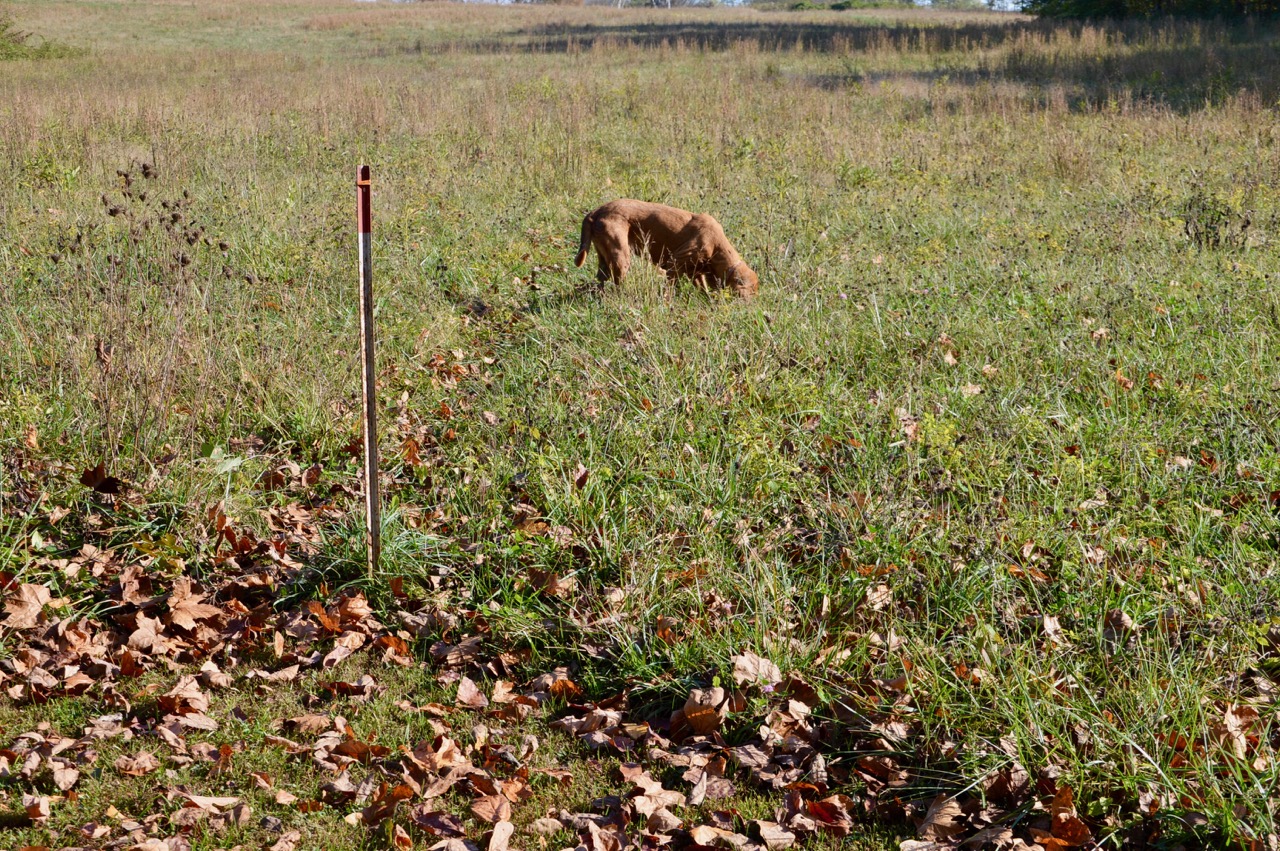 The only bright leaf colors I have seen are the trees right in my yard, just a few feet away from the property pole in the picture above. 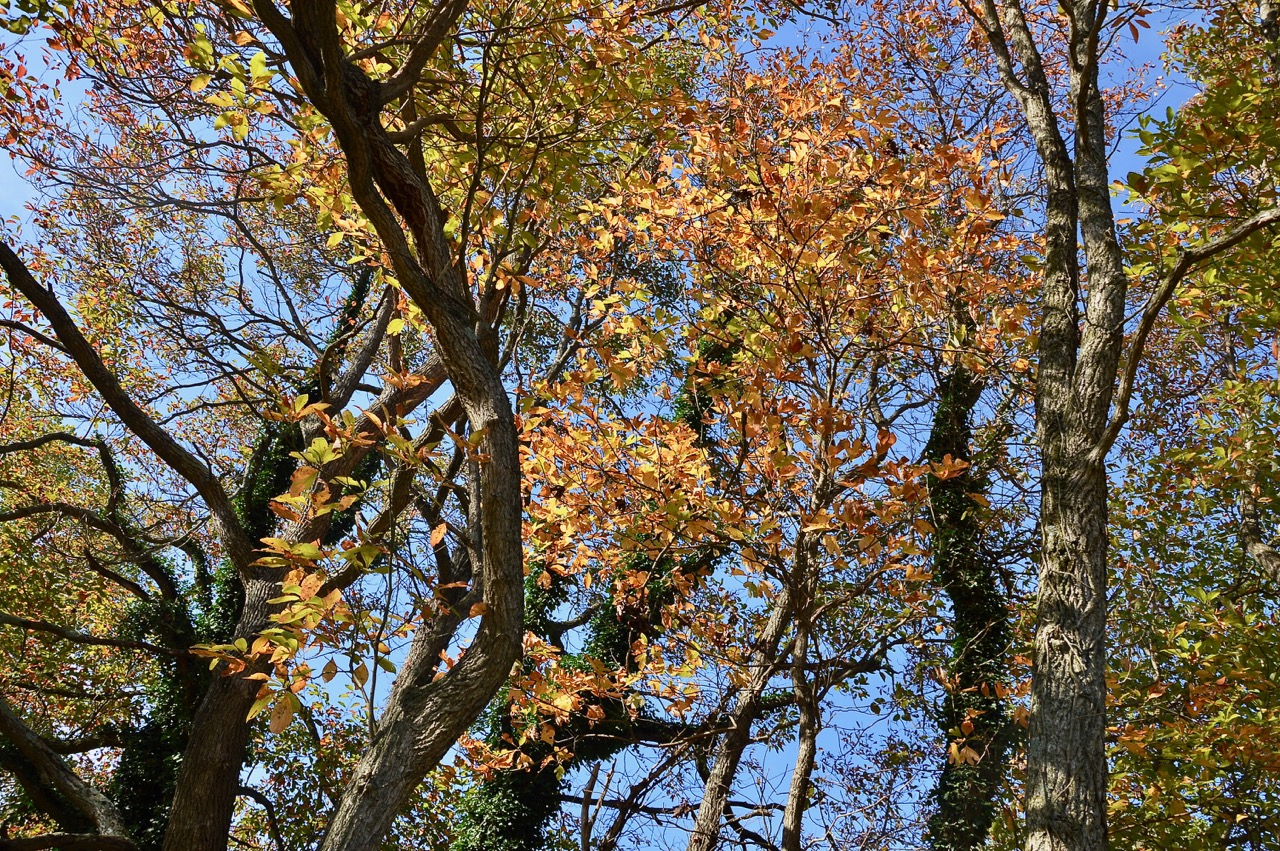 I was going to wait to post this but with 21 images I thought I'd go ahead and post it now. I will be getting on the internet searching for a few things after this. I need to find out something about the lip numbness. Obviously somewhere a nerve is being touched on the right side of my face.

I need to search not only the internet but a Mac Forum for some issues a friend is having with her new iMac. She has things going on that I have never experienced before. Computers new or old are nice when they work but so frustrating when out of the blue they decide to ruin your day or night. I guess I am lucky since I have had very few problems with my computers since move from an Windows PC to Apple computer in October 2010.

With cool temps and bright sunshine, the yard I cut twice last week in two different directions on the same day ... is tall enough in spots to mow again. With me losing track of time with all the baseball and football games I watch, I did not know it was Thursday but could see it was the reason for the grass to be blowing in the wind after 6 days. The week has flown by.

I am headed for some self massage and heat treatment on my jaw by the way it feels. Nothing major, no pain but some tightness. I woke up in the middle of the night with the jaw bone hurting so who knows what was taking place while I was in a deep dream state with the strangest dreams I had in a while.

I had a friend tell me some things to do for my jaw. It was good to see that some of the things she (a PT) was suggesting I had done on my own on Tuesday night for no other reason than it relieved the pain I was feeling at the time.

Well I just felt a wet bloodhound nose nudge the back of my arm while I type this. Stella has obviously had a drink of water and now feels it's time for her lunch ... Sadie and Heidi are not hungry yet since both of them are sleeping a few minutes past noon.

I know it sounds like a broken record repeating myself ... but it's another beautiful day here in 'the tropics' of Southern Indiana.
at October 19, 2017