Stella Sneaks Away This Morning 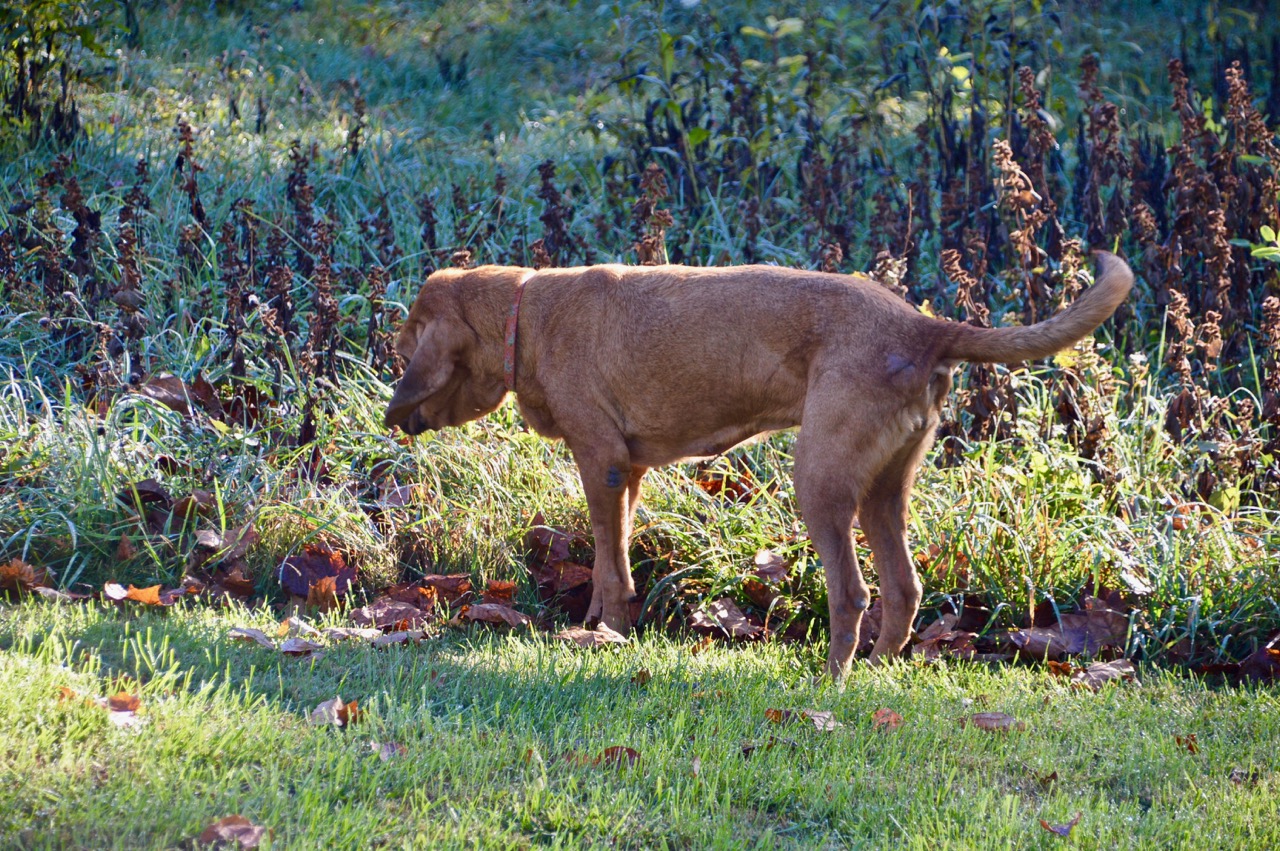 You have to admit that Stella is very persistent with her attempts to travel solo when outside. Of course with her huge desire and at least a million attempts in the 26 months she has lived here to 'escape', you could bet all the money have have that once those hunger pains hit her stomach she would be back at the house trying to nudge the door open so she could eat.


Her latest attempt at total freedom was so quiet and sly this morning, that I didn't notice she had disappeared until it was almost too late. You will see later that Sadie notified me with her stare toward the north. 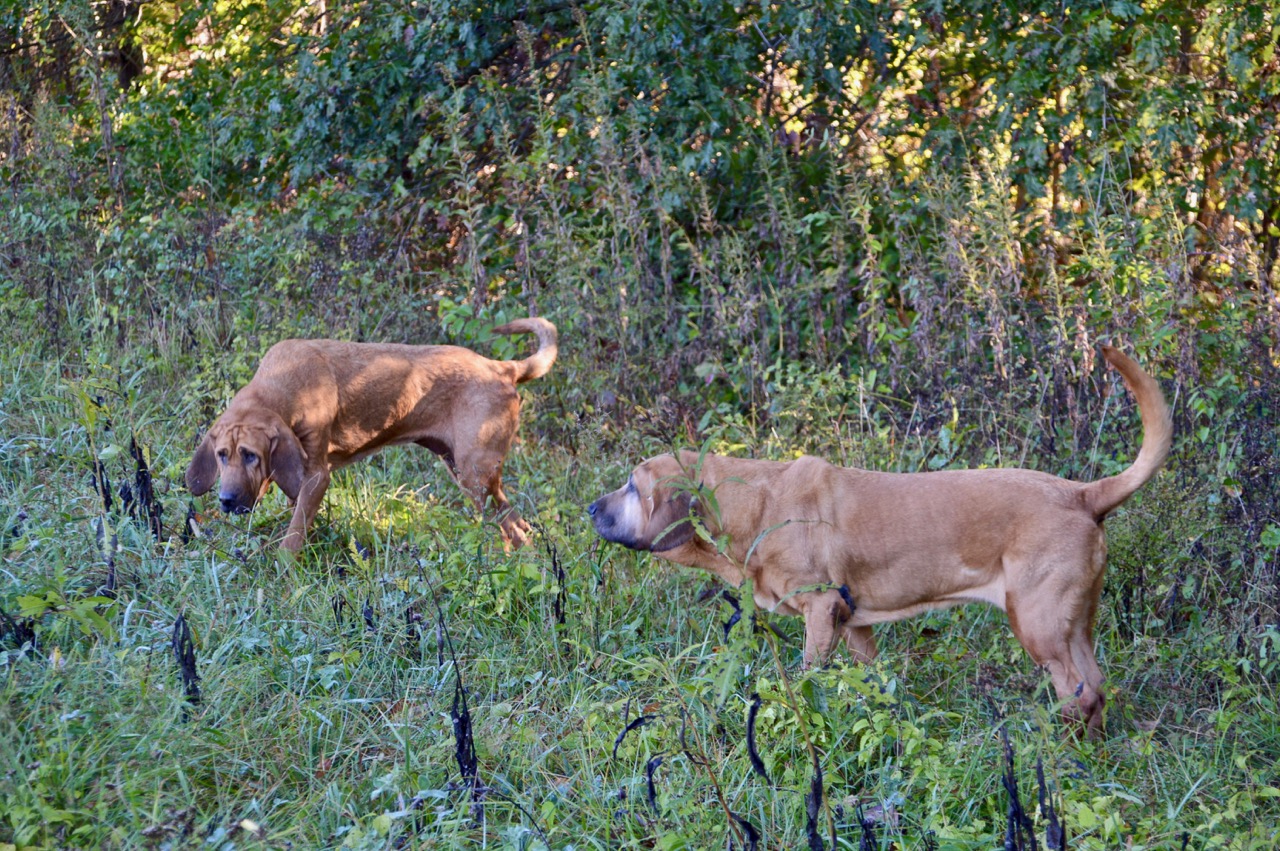 After yesterday's post where I did a little ranting, I found from the comments and the emails that zipped to my inbox ... that might have been one of the most popular posts in a long time. I know it wasn't the most visited post in the 6 years of the blog but it was a Top 5. It will be hard to come up with better humor than that, including some very good and funny comments.

As you can see it didn't take long after we started our walk where my waterproof hiking boots were soaked. You may notice those are jeans I'm wearing and not my normal shorts being worn which tells you just how cold it was this morning after a late start. 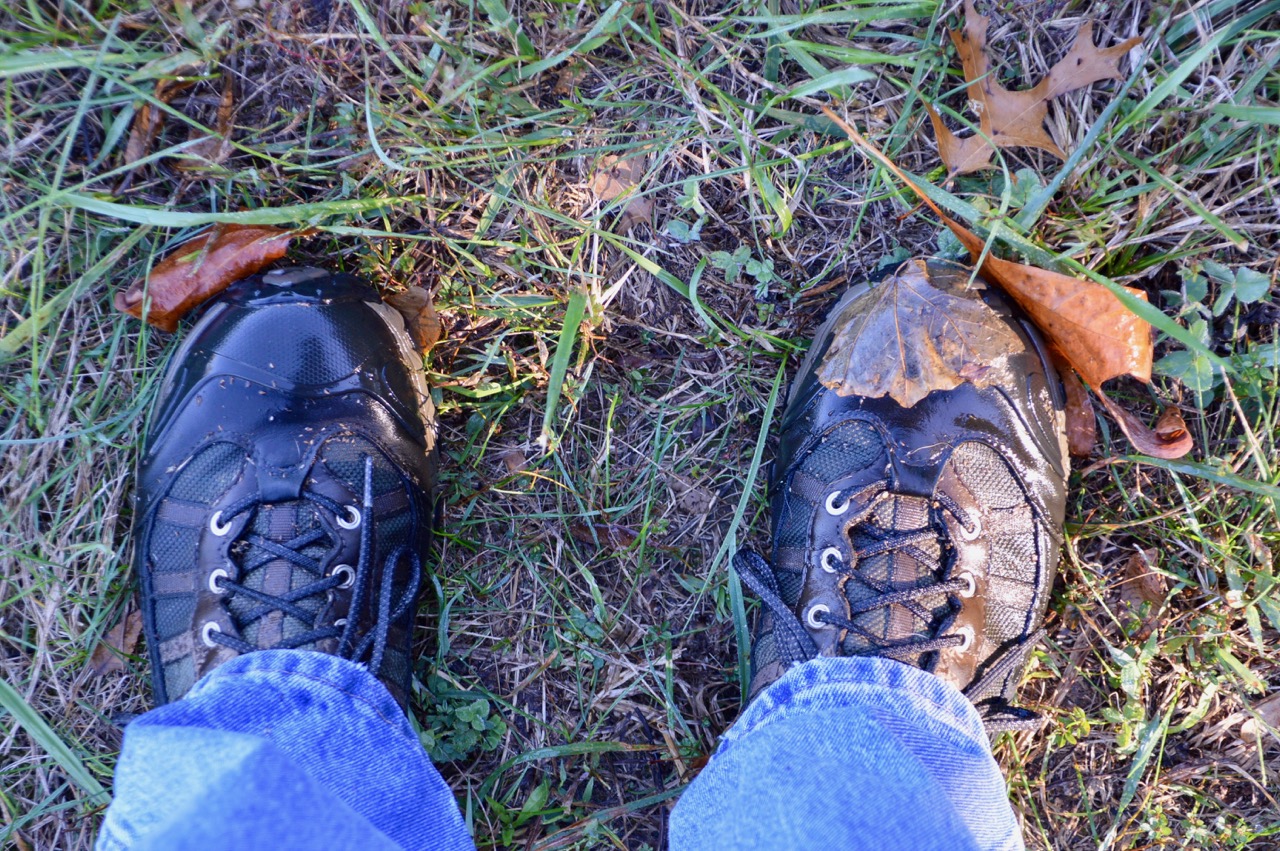 I am going to have to do some digging today on the internet to find out the weather predictions for this winter. The Farmers Almanac is pretty accurate but the Russian Scientist winter prediction last year wasn't. It's only been the 2nd day in a row where I felt that rush of cold air hit me as I open the door to let the hounds out while I pour out their breakfast of kibble but I'm a little concerned. 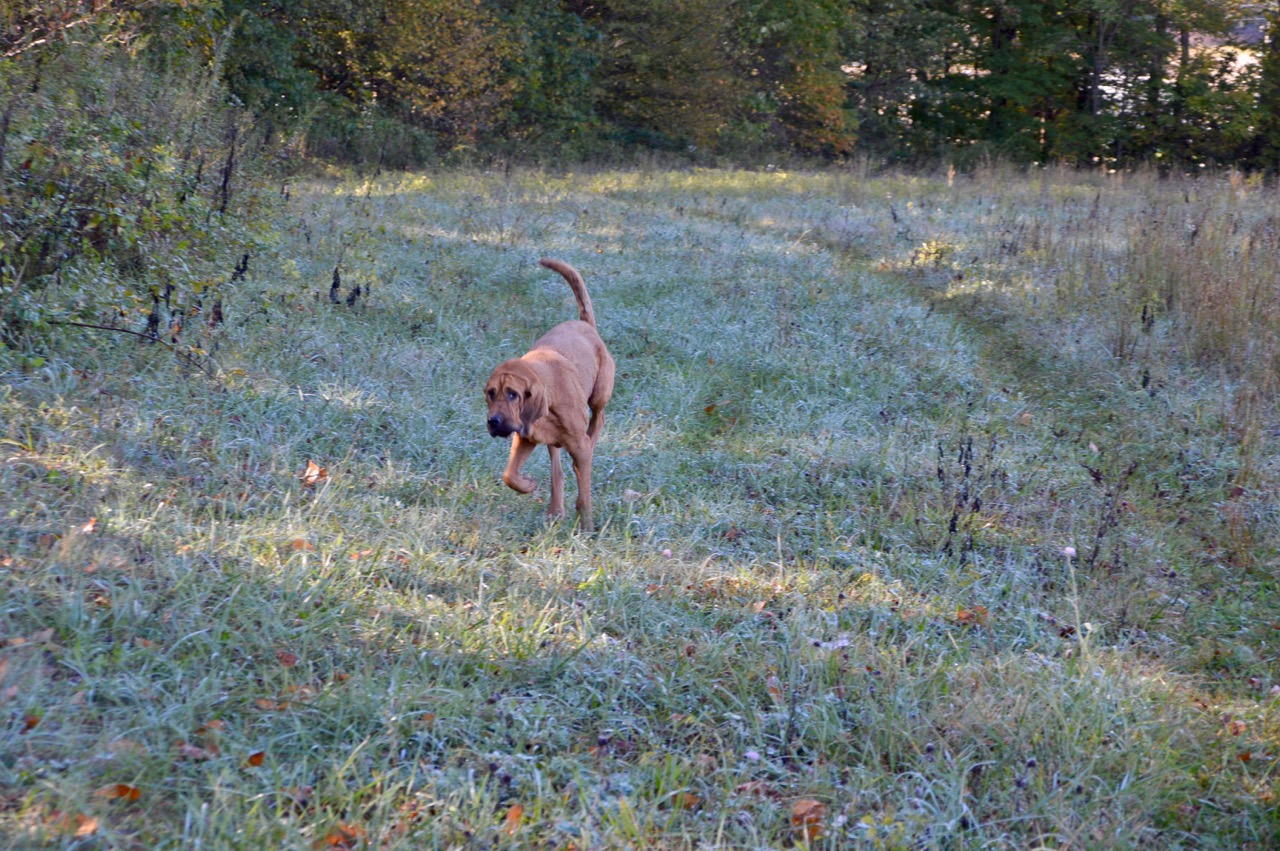 You have to look hard in the the picture above but in all of that grass with heavy dew you see my worn path on the right side but you can barely see other 'green' paths among the dew which are not the hounds ... but deer.

That is why Stella came running to catch up with Sadie ... who was long gone and out of view from where I stood. 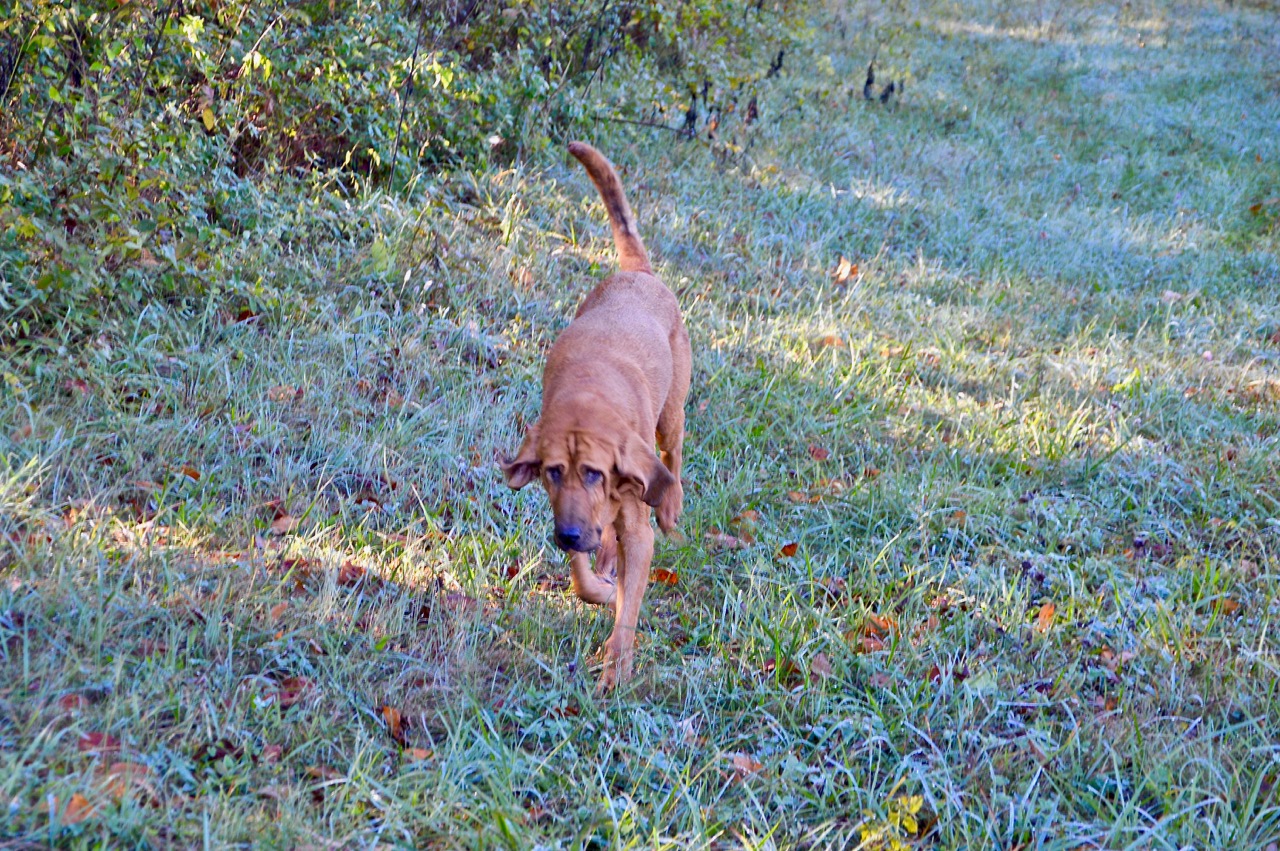 Just as I turned the first corner I barely caught Sadie up ahead charging into the brush ... only to run back to see if Stella and I were ever going to speed up and not miss all the action. 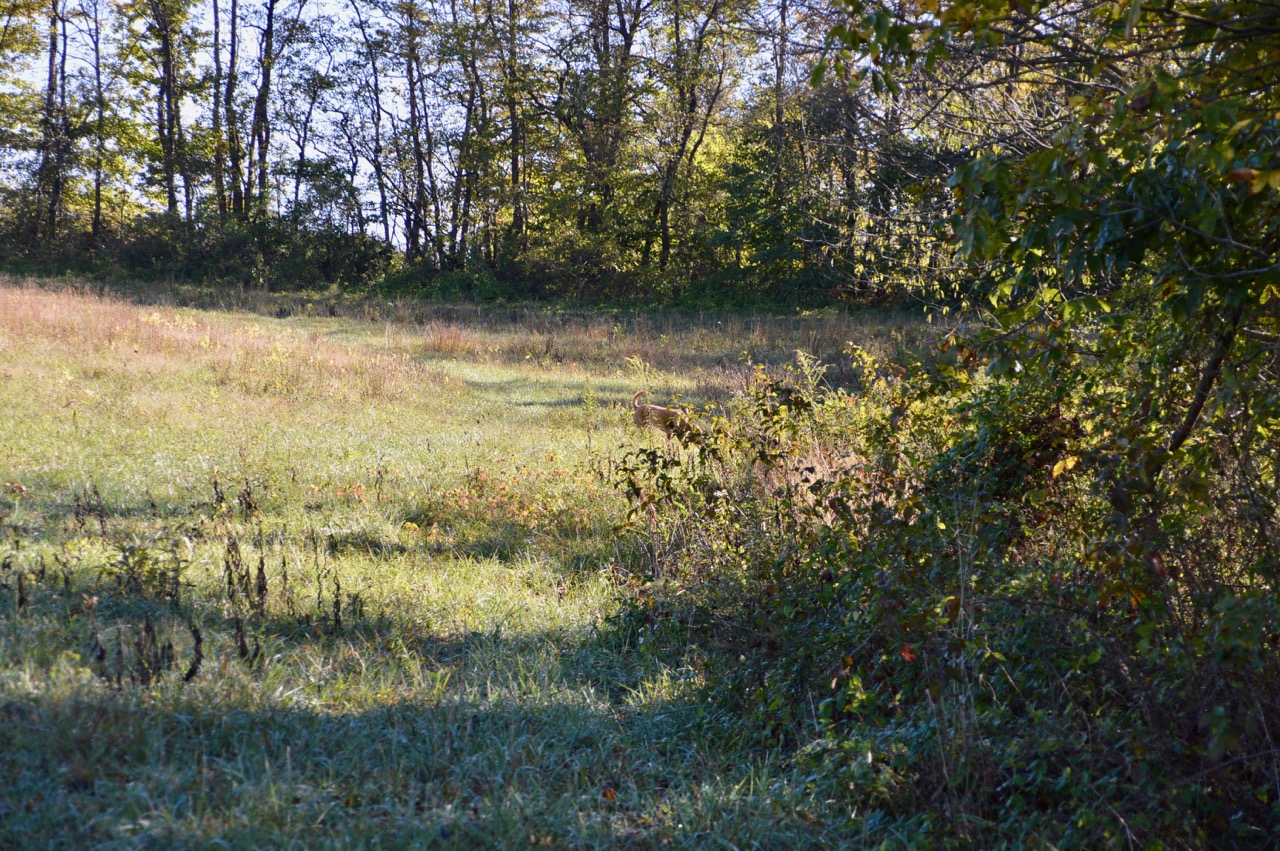 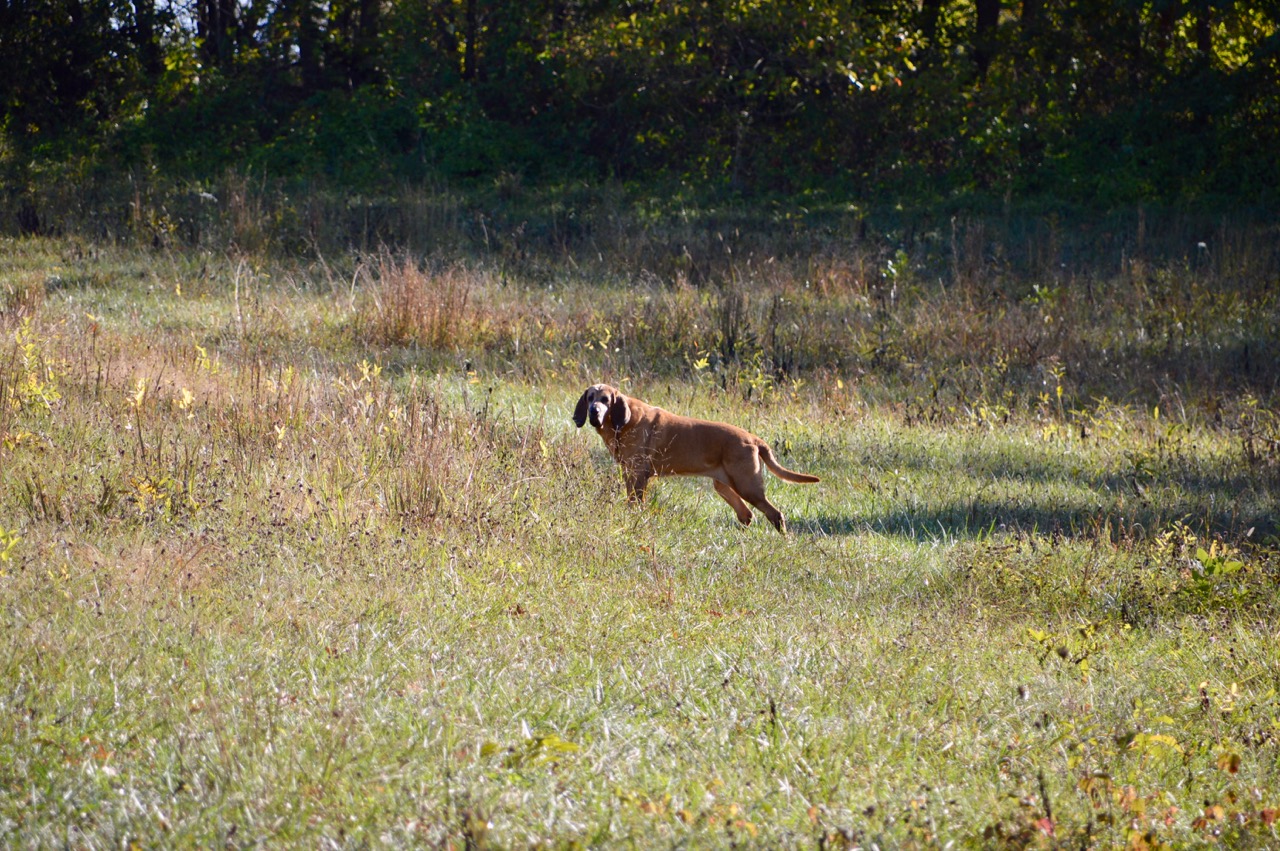 That is Sadie on the left, Stella on the right. I adjusted the lens so I could fit both hounds in the picture as well as show you just how much roaming room they have as I walk the same path every walk and have for years, plus or minus a foot or two either way.

What is a surprise I later found out ... with them being this far apart I saw no way that Stella was going to sneak away ... I mean she is there right in front of me within view even without looking through the lens of the camera. I thought she would catch Sadie but nothing more. 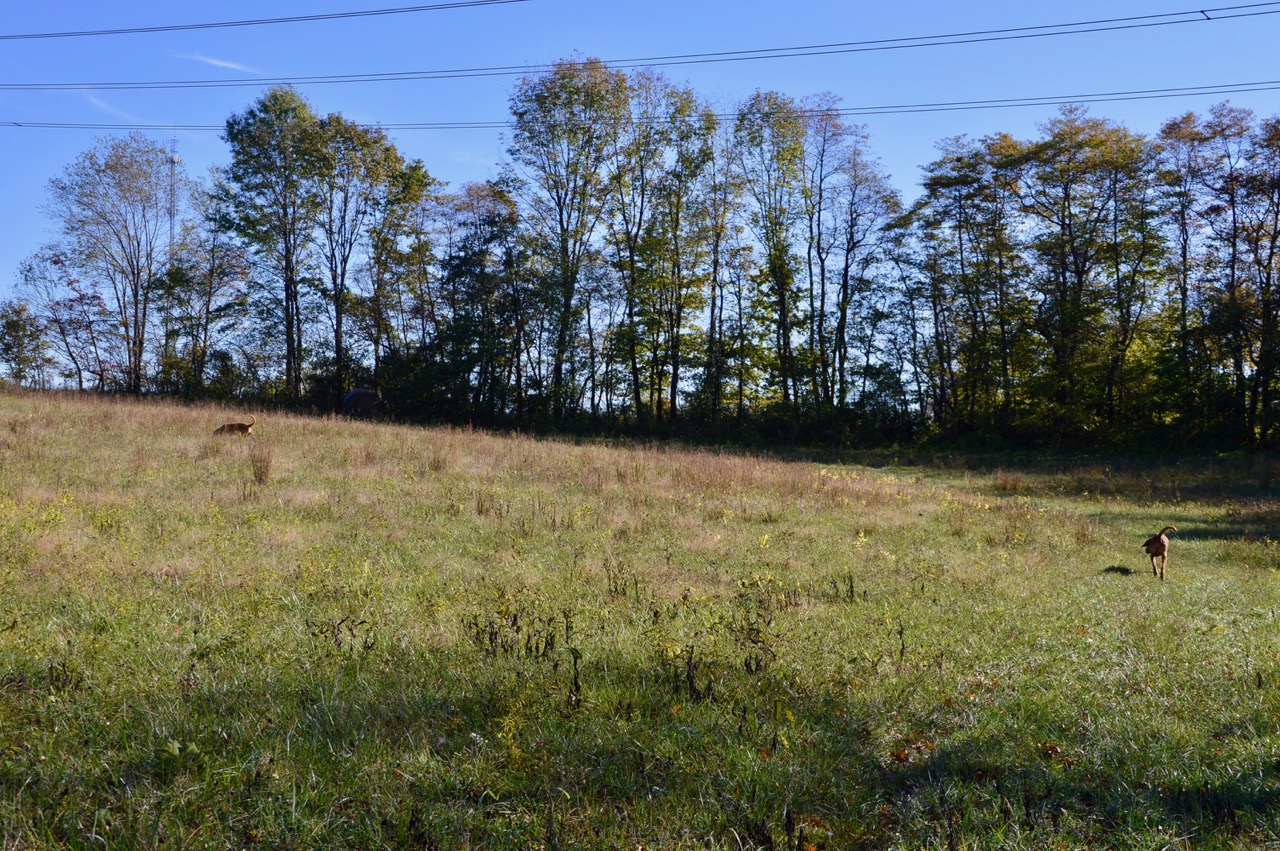 Sadie eventually changed direction and came back sprinting to the path right in front of me. I continued to walk looking to the left, up at the sky, the trees ... meandering slowly on the walk ... really not paying attention. 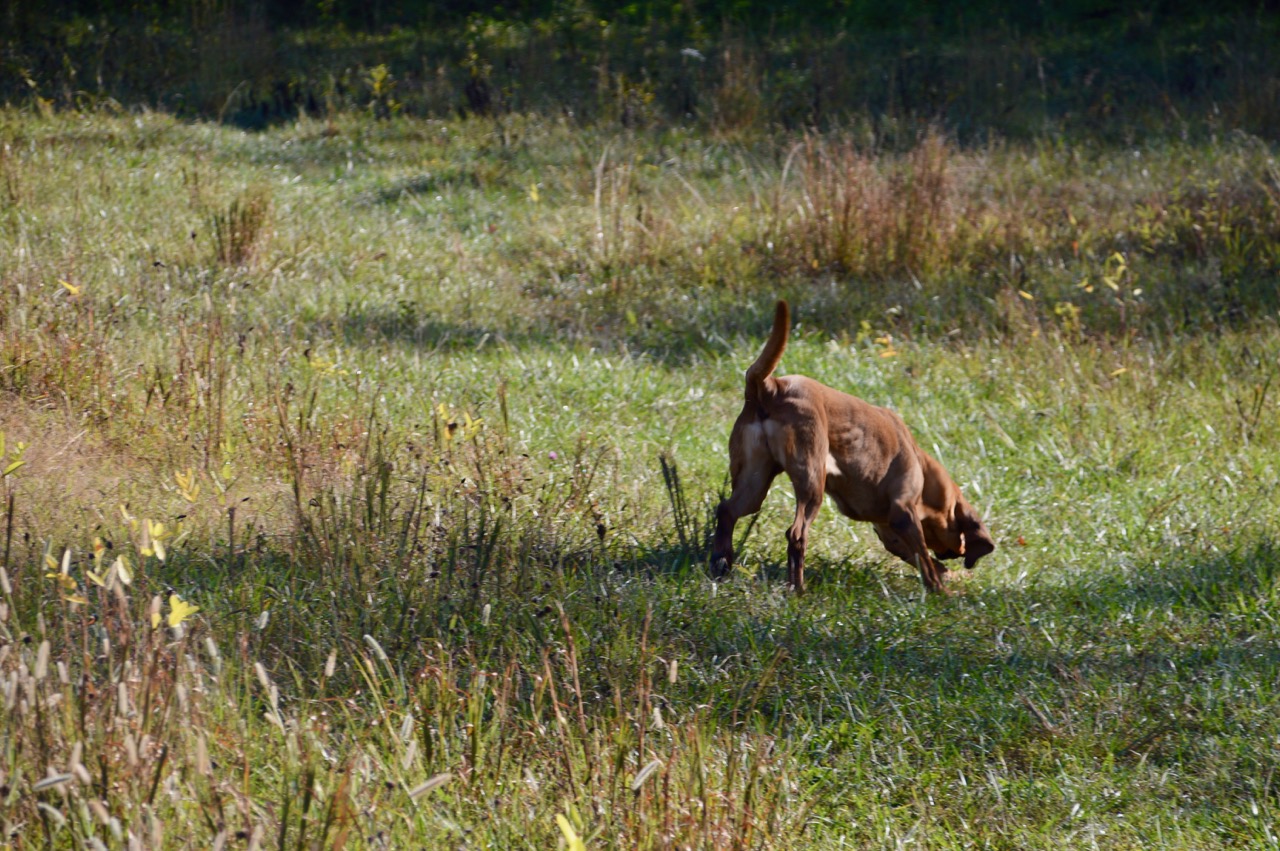 It wasn't until I picked up Sadie's stare inside the 200mm lens that thought of "where's Stella" hit me upside the head with a jarring force. Stella was NOWHERE !!!! That's where Stella is .... nowhere in view ... but Sadie was once again giving me a clue where she 'might be'. Although this field looks flat, there is a lot of small hills in it, where a red bloodhound can camouflage itself amongst the few tall dried out strings of hay. 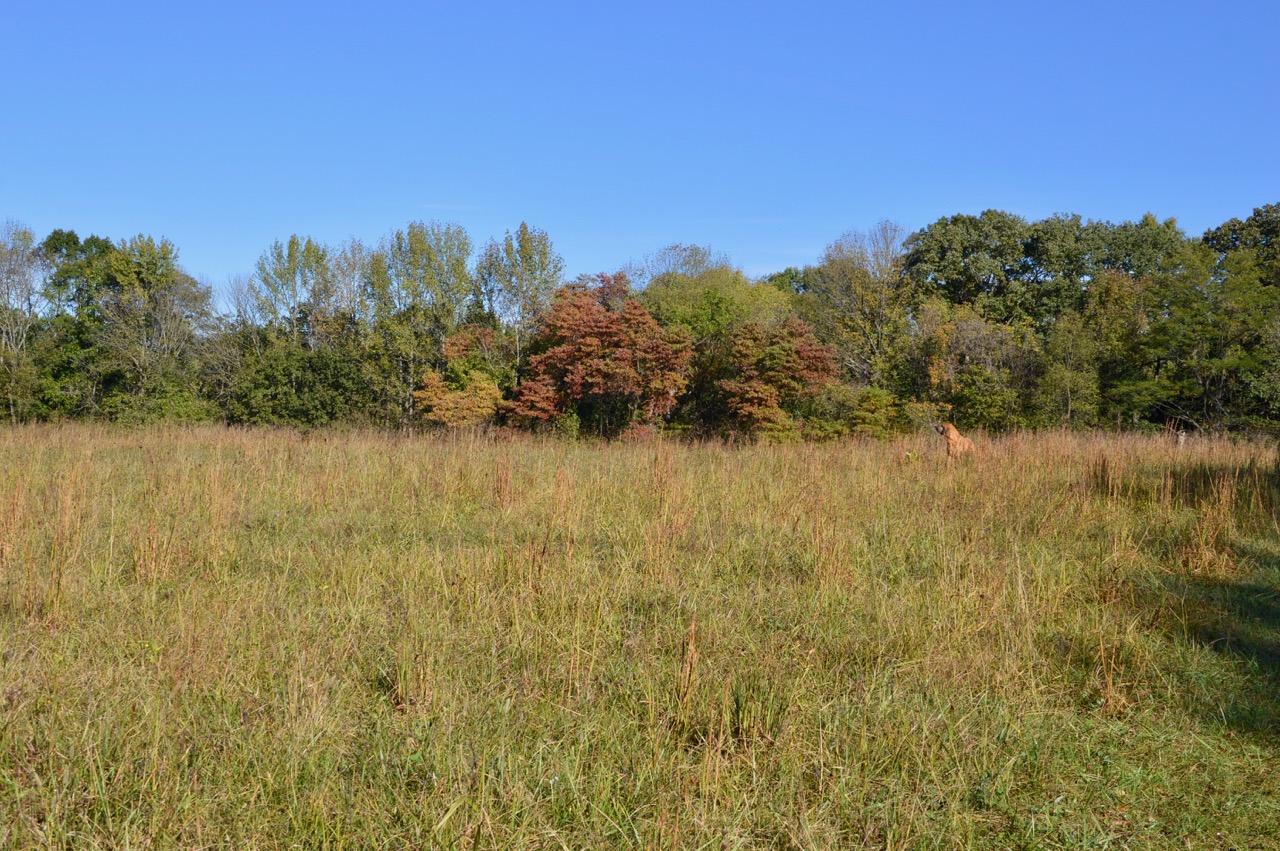 I wasn't going to run this morning, not even trot to the top of the small hill to see Stella. I'd let Sadie keep an eye on her and if Sadie started running then I guess I would have to also. Luckily as I crested that small incline ... who did I see? .... Stella. 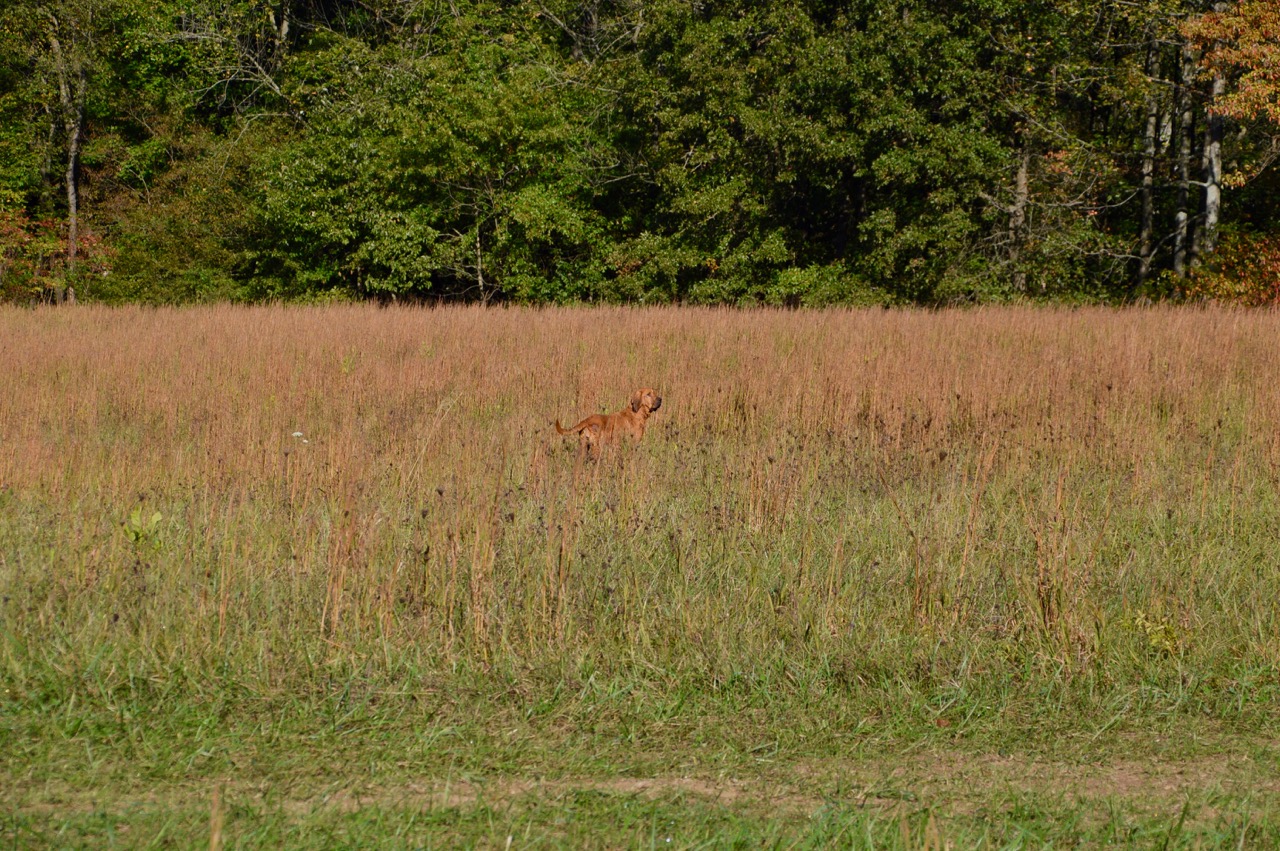 How she covered so much ground, so fast is hard to figure out. I never saw her running and in fact I never saw her head that direction. I guess that is what I get for 'daydreaming' about how am I ever going to get through this cold weather this winter .... for some reason this fall it feels different, like we are going to make up for that abnormal warm winter last year with more snow and freezing temps this year. 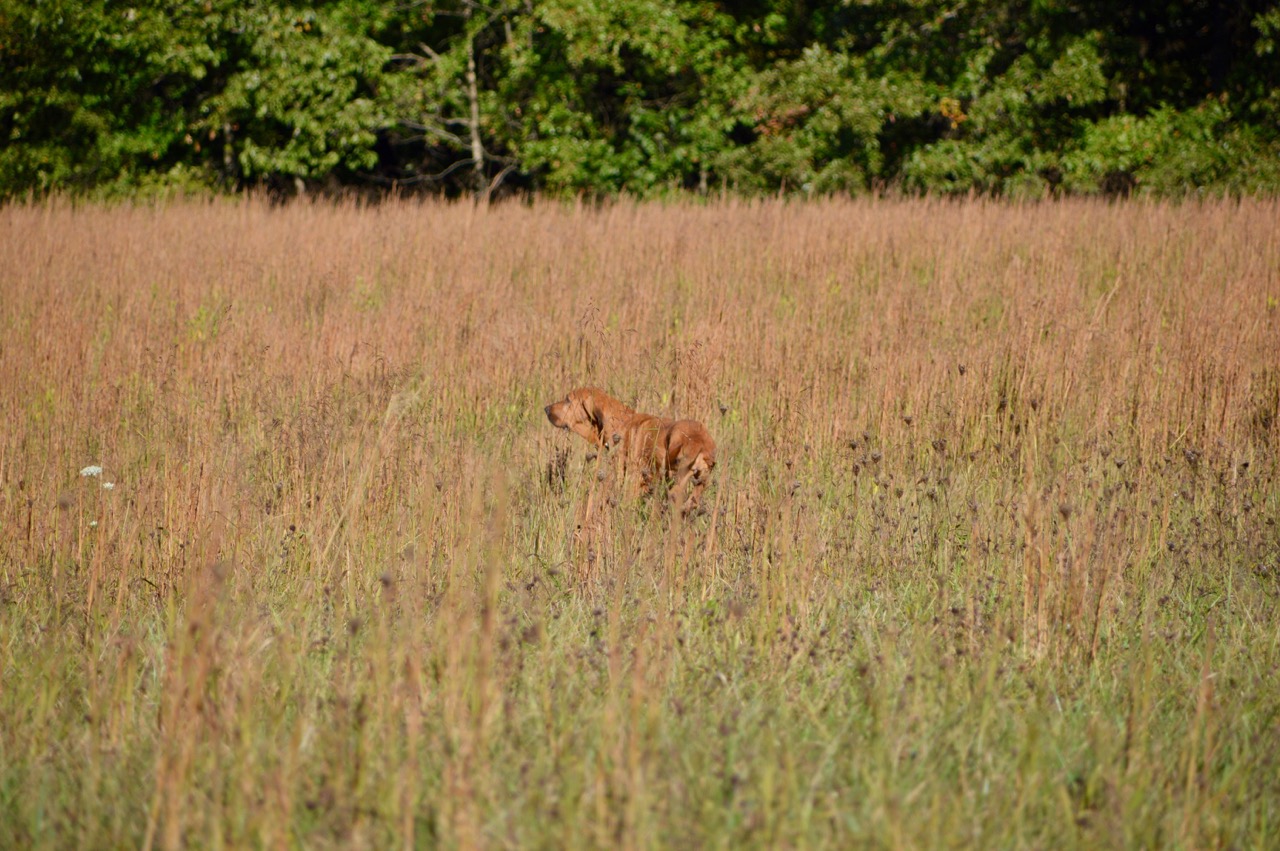 Stella definitely heard me calling her name but that didn't mean that she would sprint to me, admitting that I had caught her with a wagging tail and hear her baying. All she meant when she raised her head hearing my voice was that she did hear me and she was too busy to leave. 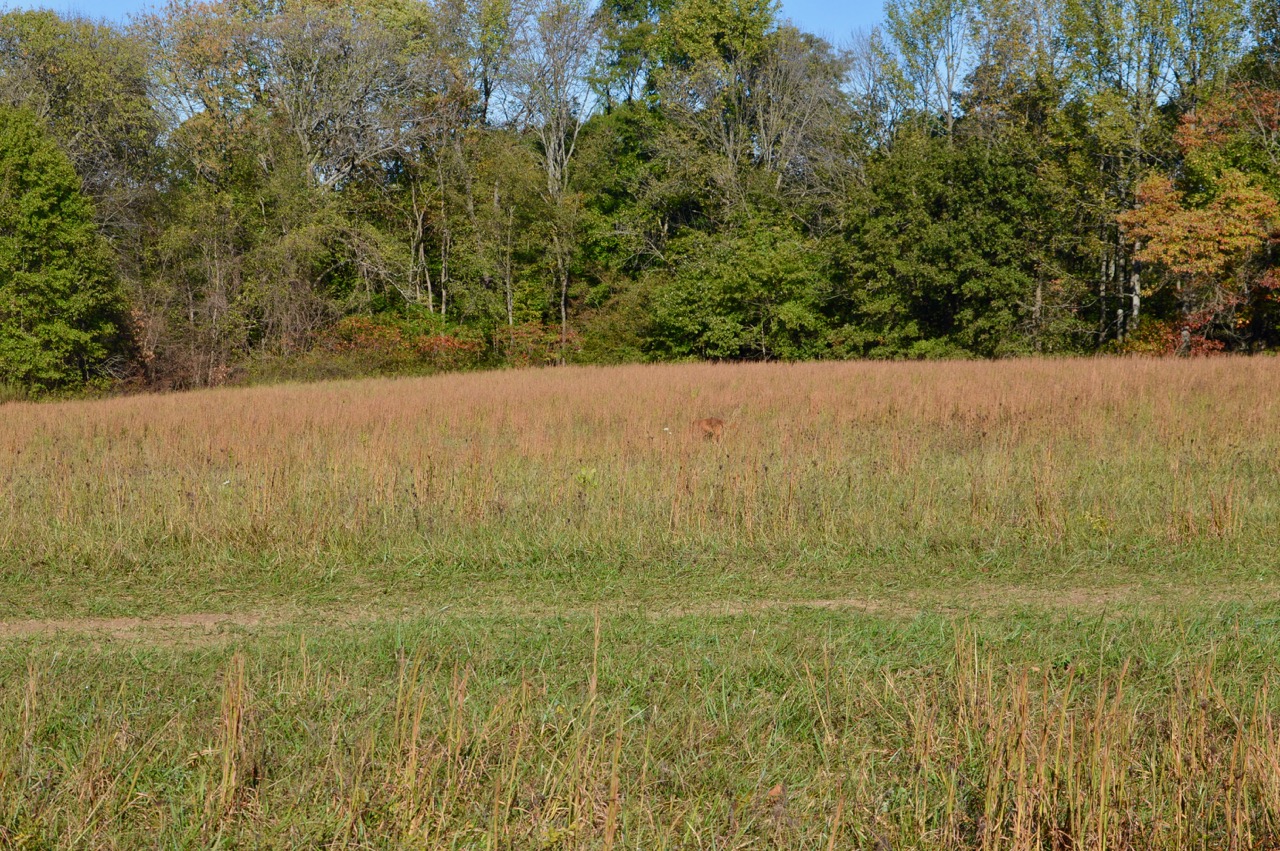 I slowly walked across another wide path made by the numerous ATV trips, Stella didn't move. In fact she let me walk all the way up to her and take her collar to lead her in the right direction ... within sections after I touched her collar she takes off sprinting to meet Sadie and off they went ... leaving me behind again. 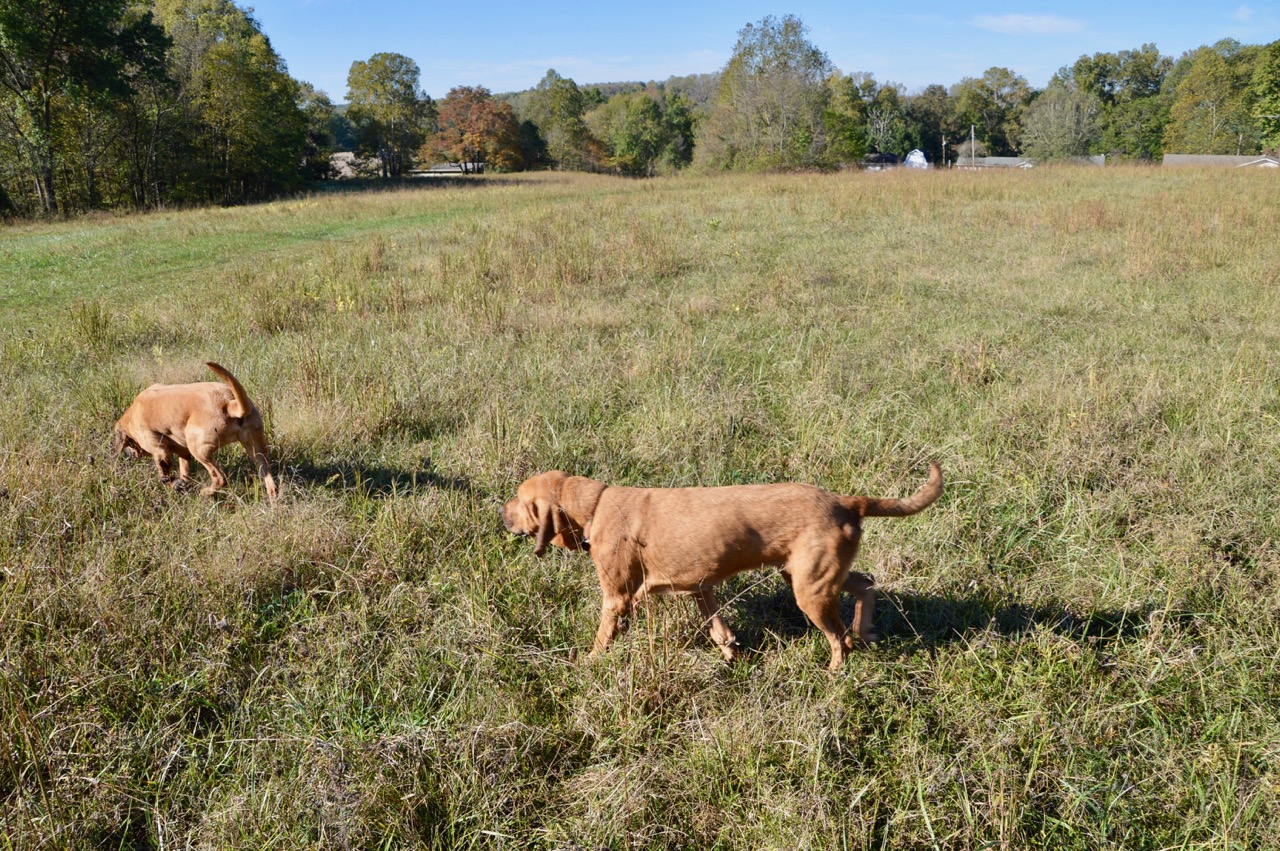 She turns dull days in 'rural america' into surprises right around the corner without a normal frequency or limit on how many. Let's just say that she keeps me on my toes. 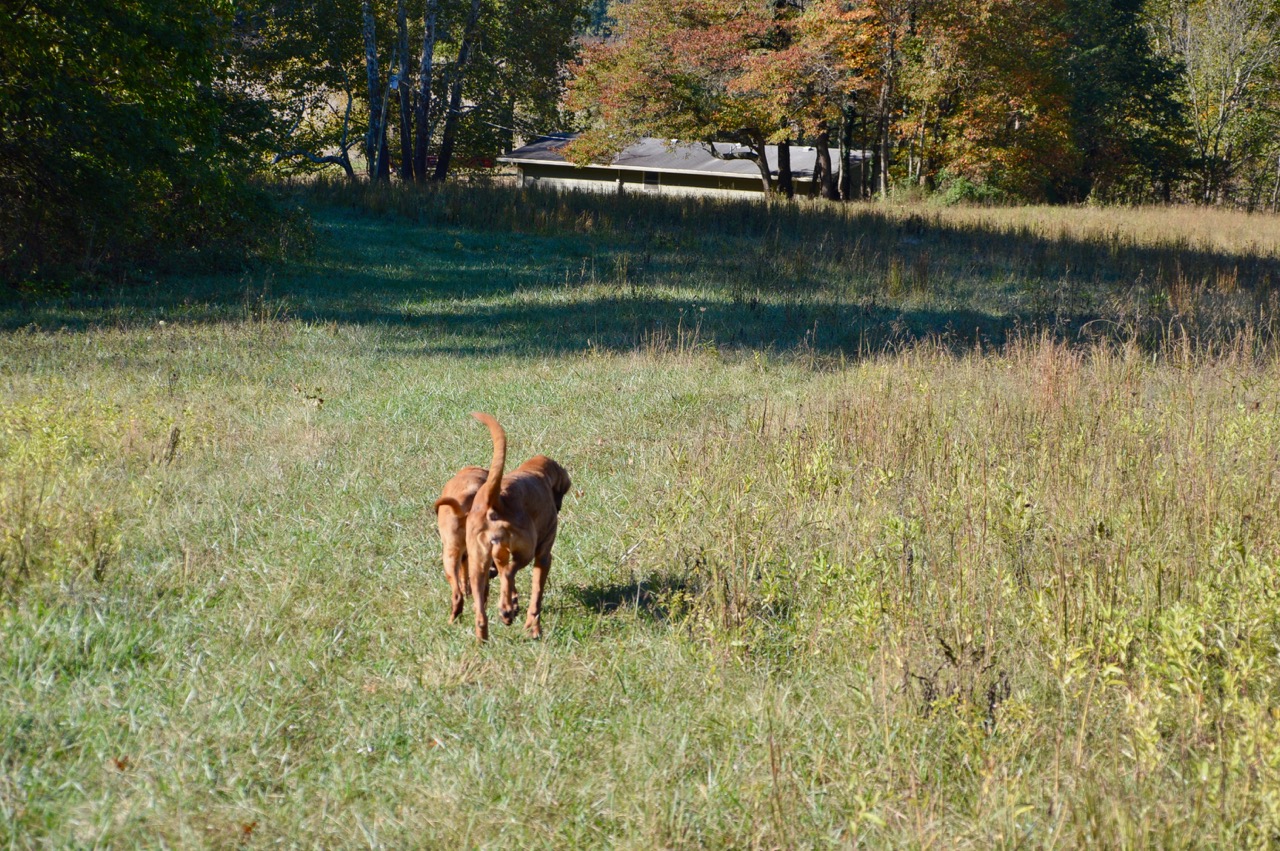 As they took off running they would decide for me if I took the normal return path home or our new alternate route started about a month or so ago. 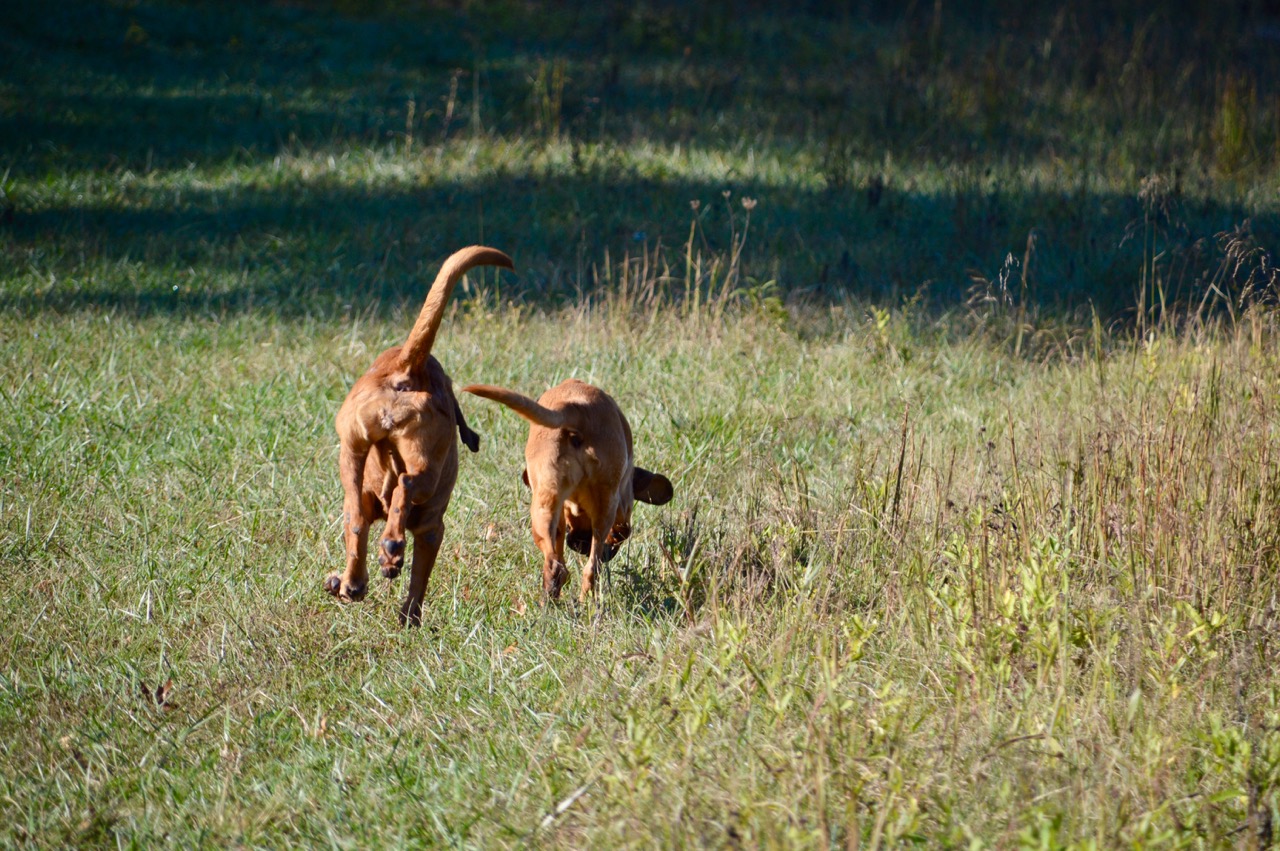 They both headed down the oldest return path. It may have been 51° when we started this walk but it sure did feel like the 30's by the time we finished this walk. I am more agitated about the colder temps than I normally am during October ... I've never been a 'winter person'. 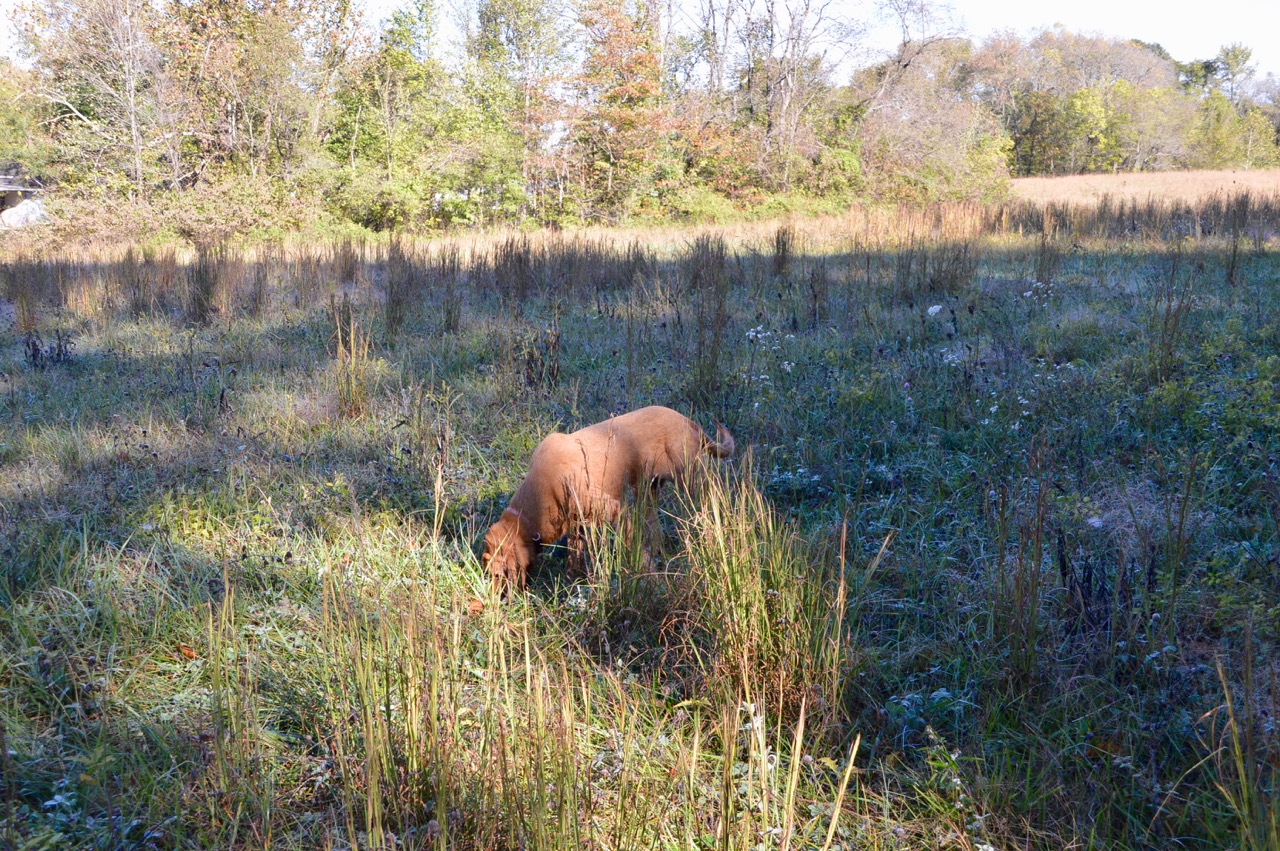 With all the trees resisting changing their colors to bright colors and becoming vibrant enough for weekend leaf seekers ... this is almost the only thing with color I could find this morning ... about 20' from the yard. 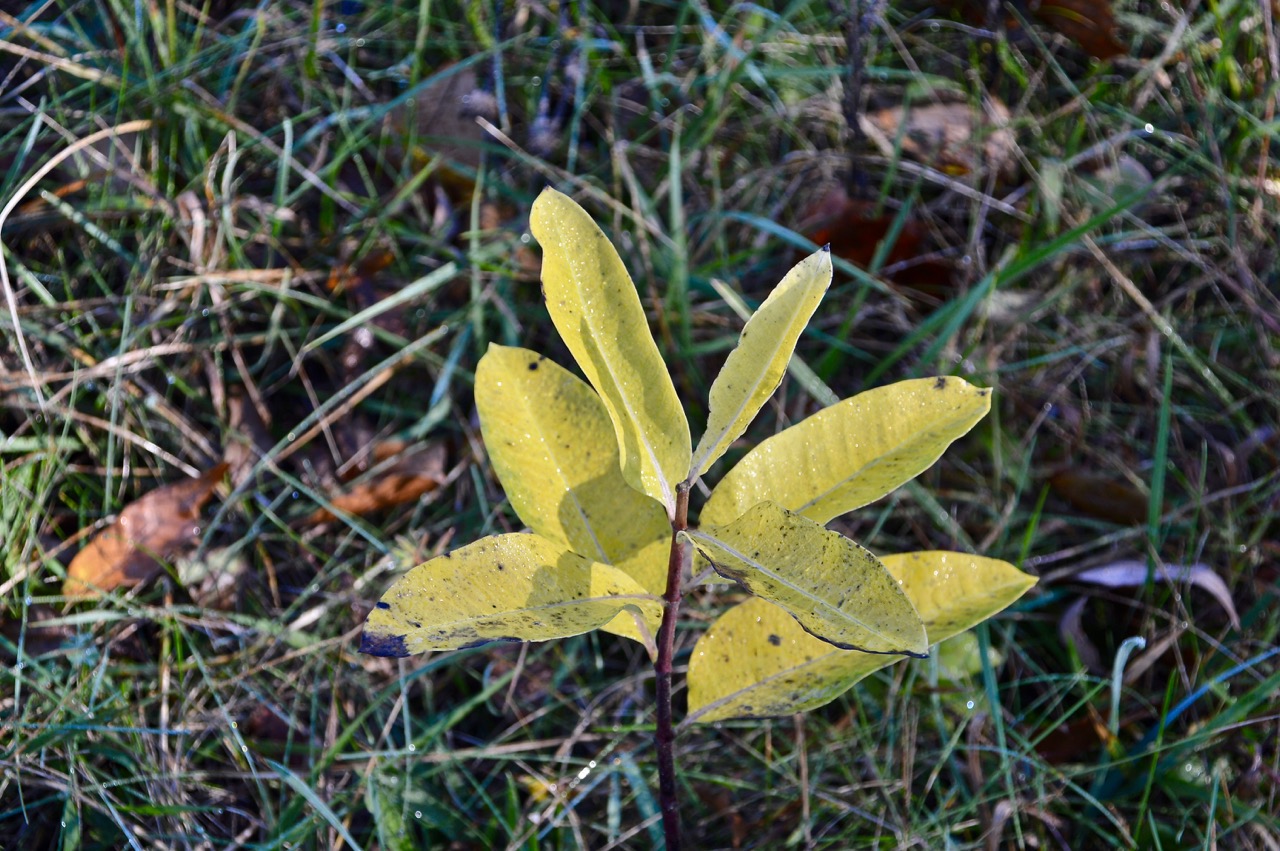 This post is a perfect example of what I talked about the other day. Most bloggers post once per day, some once per week, once per month or whenever.

Since I like to talk and can't keep my mouth shut I usually come up with enough photos in a 24-hour period that I could fill 2-3 posts per day but try to keep it at 1 per day.

Since I popped today's post out automatically at 6am this morning ... you really didn't think I was up that early did you??? I now have this post with 19 photos and the normal morning commentary  that I could post now for the 2nd post of the day ... but could have more pictures of the hounds later with better lighting but that would be 3 posts in one day.

Traffic reports or post visit counters show me that whenever I post more than one post per day, the earlier posts of that same day are missed for some reason by readers.

I have my front page set up where each post has an abbreviated intro paragraph so you can see there are more than one post per day but those reports show that somehow readers miss the previous post of the day.

I have to make a quick decision though ... it's almost 1pm and all three hounds are gathering around my desk chair letting me know their lunch needs to be served. They will be thrilled with the time change that happens soon but I can't remember exactly when.

The sun continues to stay out and I continue to hear heavy big farm equipment going by the house here in 'the tropics' of Southern Indiana.