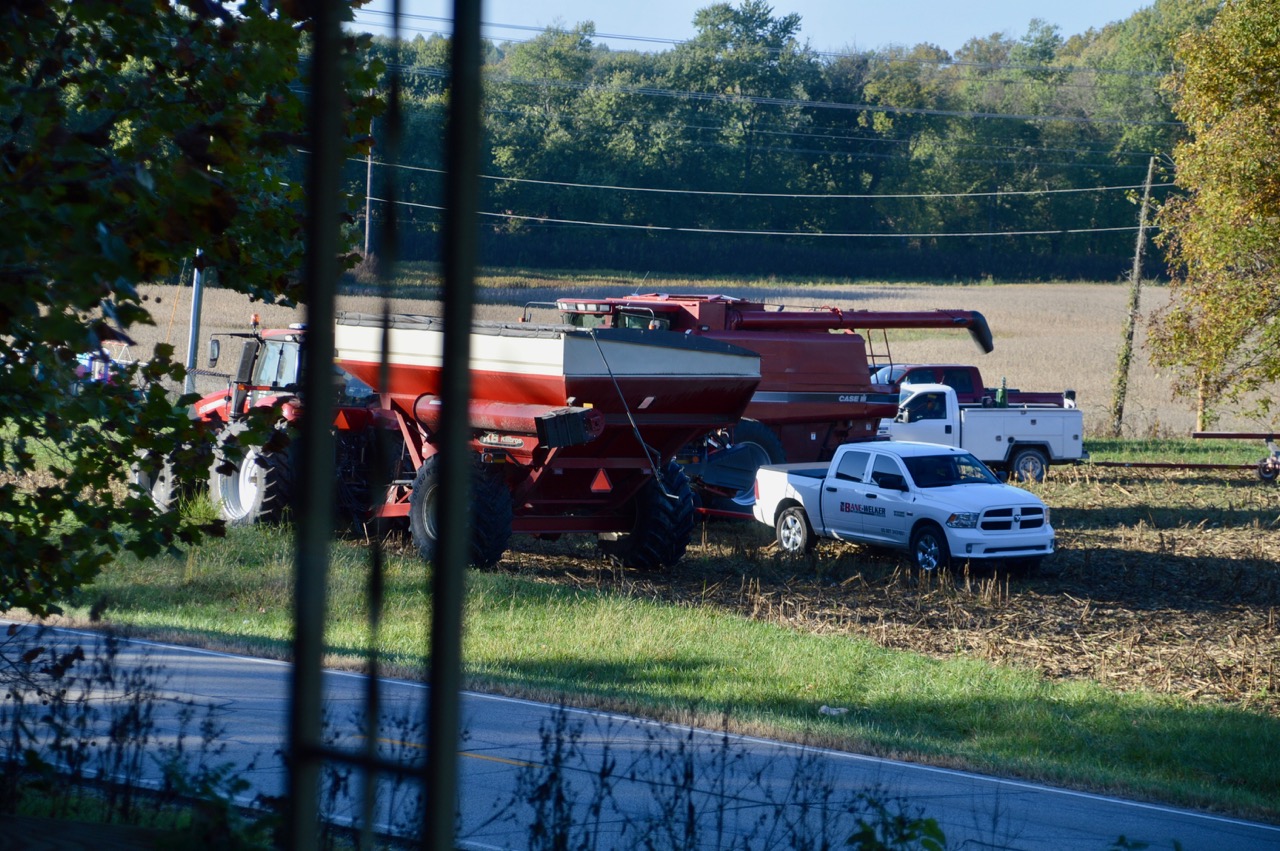 They proved once again they know what to do before the rains come and delay their harvest by a week or more until the fields dry out. I had started my 'thorough' detailed house cleaning Saturday morning to burn off some nervous energy I had for the football game kicking off at noon. The farmers had moved their equipment into position sometime Friday night. With a chance of rain today they were going to finish picking the back half of the cornfield that they replanted in May after the flooded area dried.


Depending on the direction of the winds, there is always a chance of dust from the corn picked and loaded into truck trailers might blow my direction. That's never good when I have all the windows open. Luckily as I glanced at the first load of corn being loaded I could see the wind was blowing north, parallel to the house ... all the windows stayed open while I cleaned. 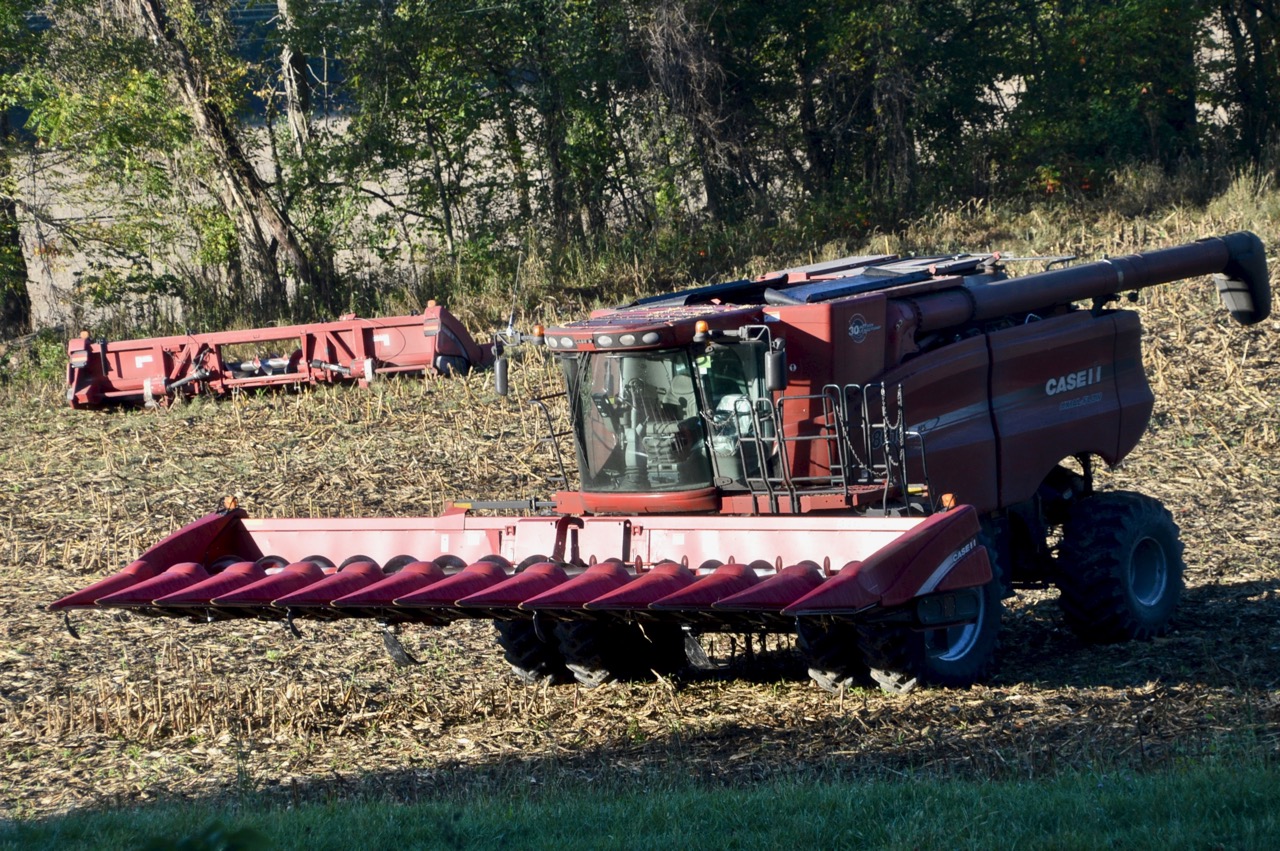 By the time I was finished and was ready for 14 hours of football on tv, they had completed their job. The field that I can see from the house is only the far end of the field. It curves right behind the trees and goes for almost a 1/4 mile behind the houses of my neighbors.

So after a bright sunny day on Saturday ... this morning had other plans with gray skies, rain off and on and those temps in the upper 70's yesterday had dropped to the low 60's for a high today. 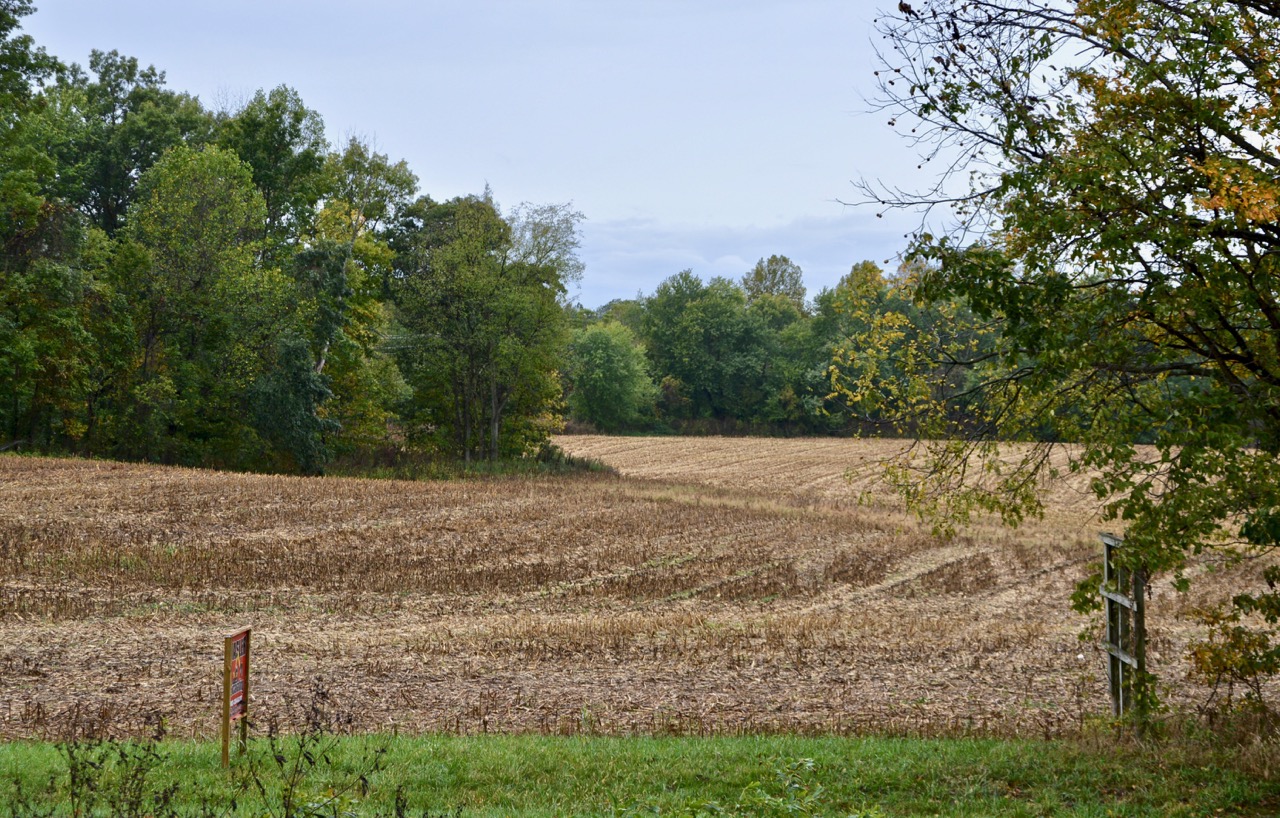 All of that doesn't matter to Sadie. She doesn't want a lot in her daily schedule but food, sleep and a few walks. So after the strongest storms blew through around 8am, with little rain for us, Sadie sat in the doorway of my computer room giving me the stare down to let me know it was time for the fist walk of the day.

It was raining lightly outside by the sound of it hitting the leaves. I waited a little longer while she didn't move and kept her eyes locked in on me in front of my computer. I'm not sure she even blinked the whole time she stared at me. 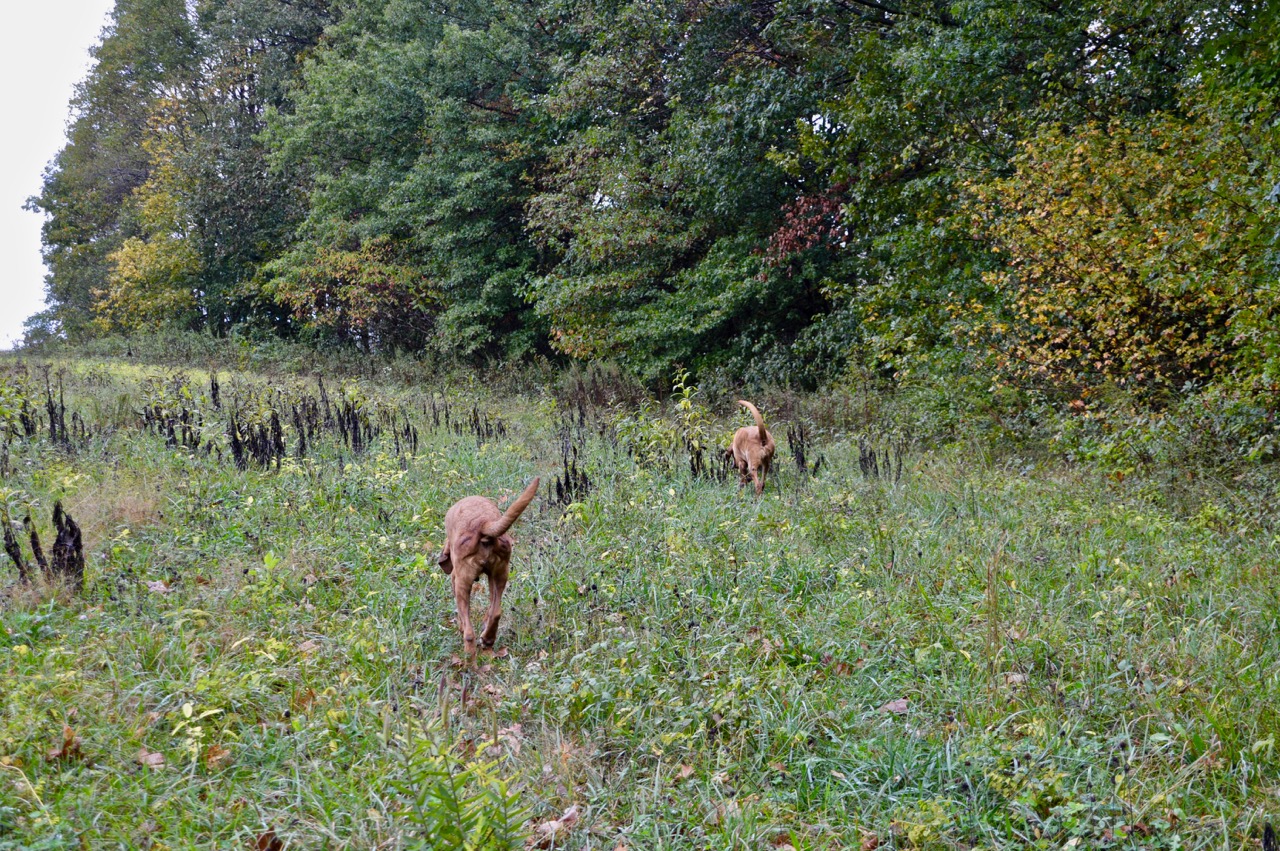 She won ... just like she always does. Those eyes of hers and persistence are pretty convincing. The map of the weather radar had our location pinned right in the middle of greens, yellows and some oranges showing us it was rainy or could rain. I slipped on my snow boots that double up as rain boots, a light rain jacket ... hearing Stella howl and see Sadie hopping up and down when they saw me put my ball cap on. That's cap is confirmation their walk was going to happen. 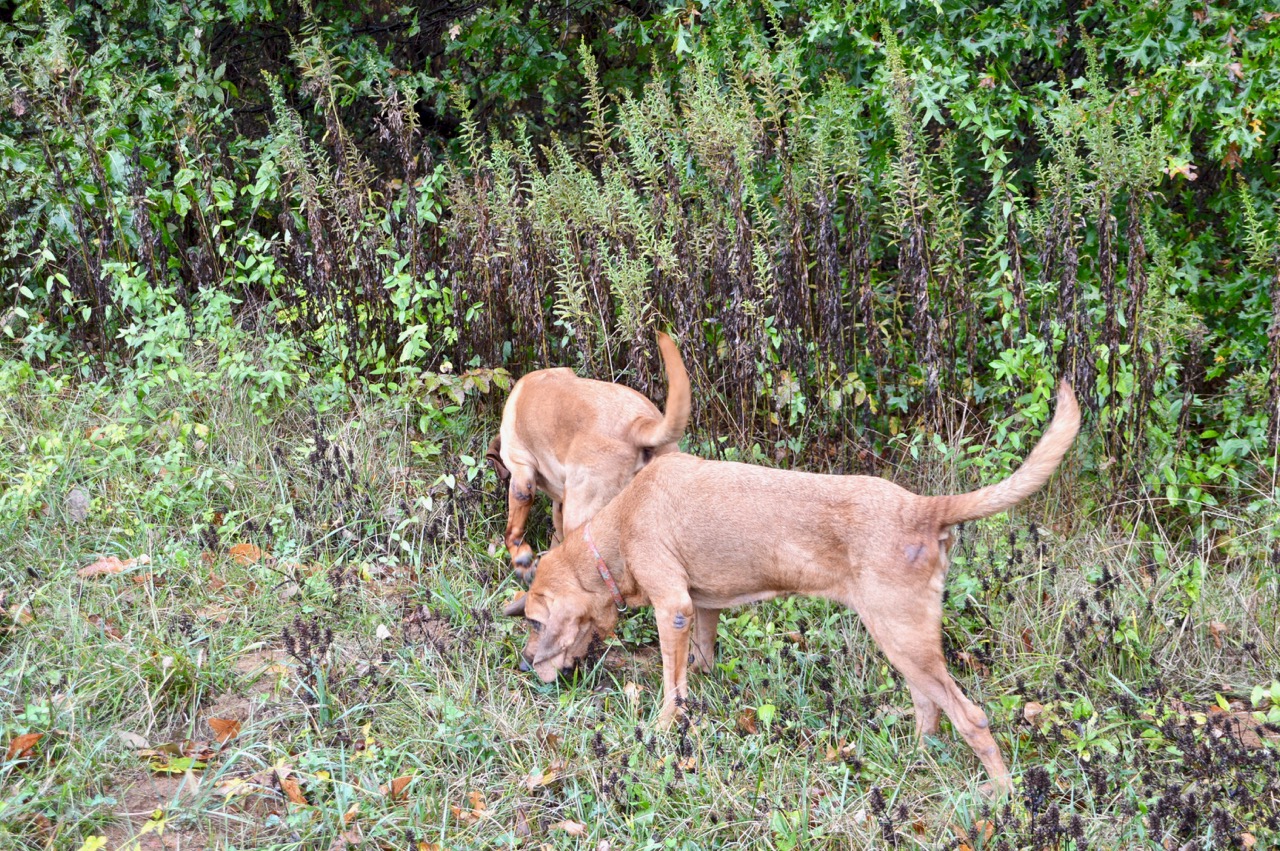 As with any time after a rain there is a lot more exploring by both hounds. Heidi had already cancelled her day with the mention of the word rain or the sound of rain outside the open window. She was stretched out as far as a basset hound can stretch, on 'her' leather couch sleeping. With a look at me that I was to wake her when lunch is served, but in the meantime she was sleeping. 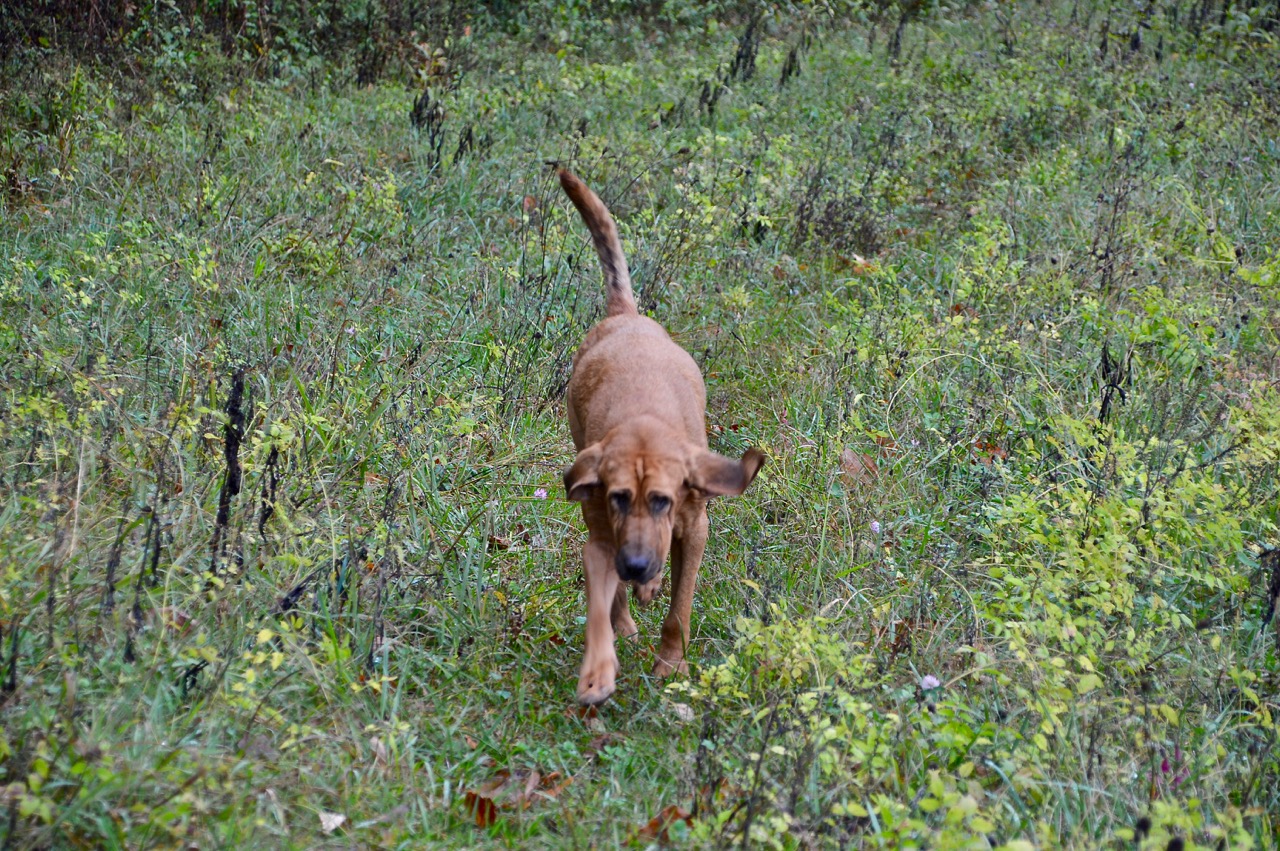 Stella didn't feel like wandering this morning and stayed either close behind me or with Sadie. 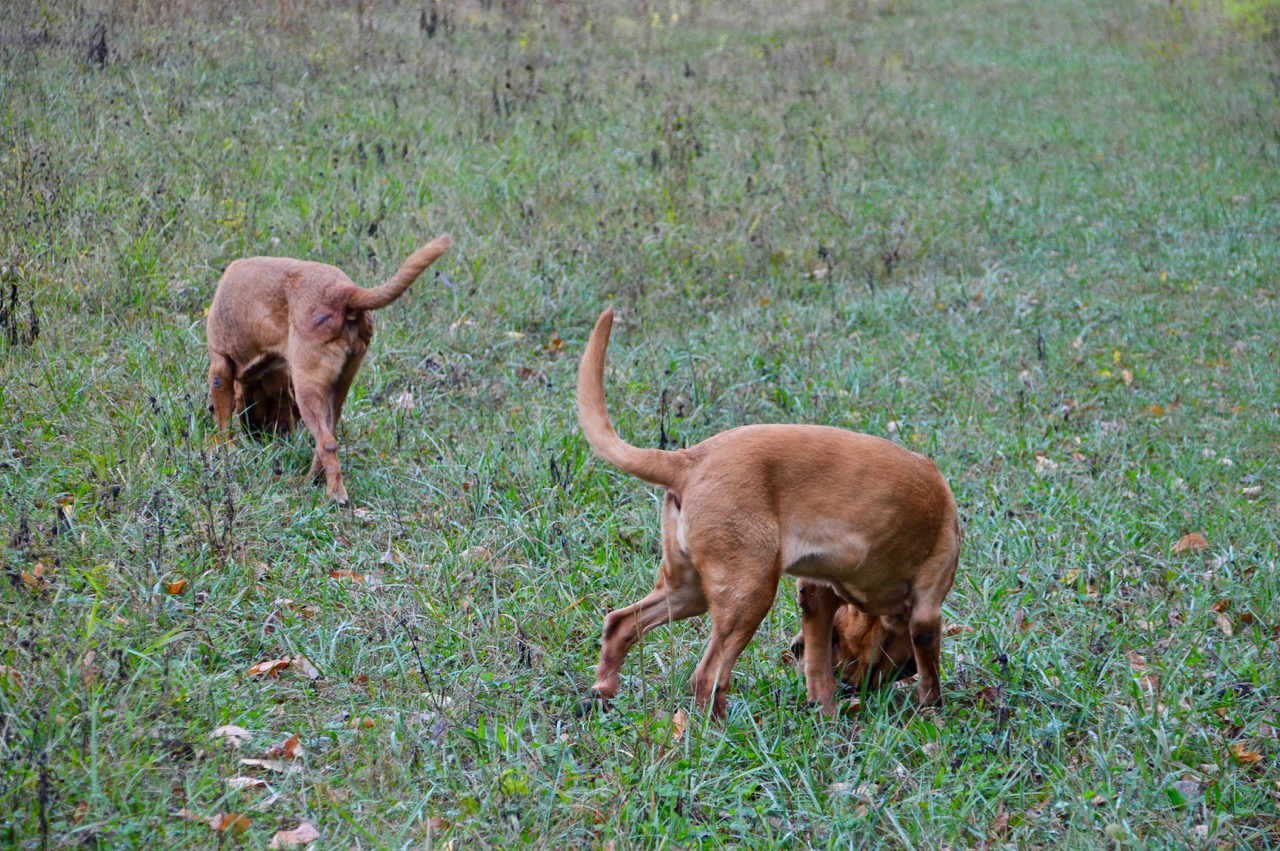 With the raindrops getting larger and more frequent but no more than a light rain ... I cut our turn short in back of the field and took the recent path created by the ATV traffic from the neighbor. There really isn't a lot of difference in distance of our walk by doing this but always feels like a shorter walk.

Stella was almost positive with decision to take this path meant she and us were going straight ahead ... where she ran off to last Thursday, back into those woods up ahead. She is hoping for that anyway. 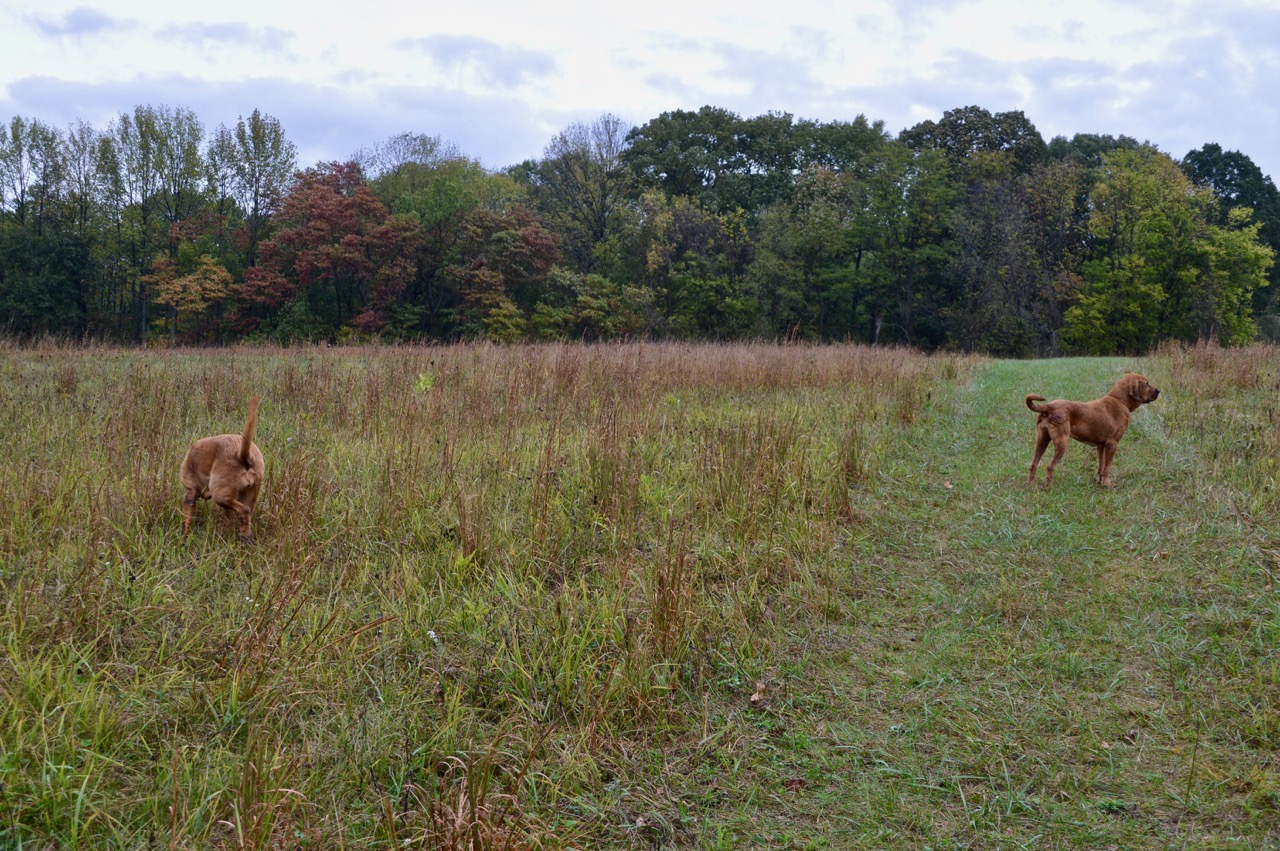 When I said "no, over here" she immediately walked in front of me pouting like she does when she doesn't get her way. 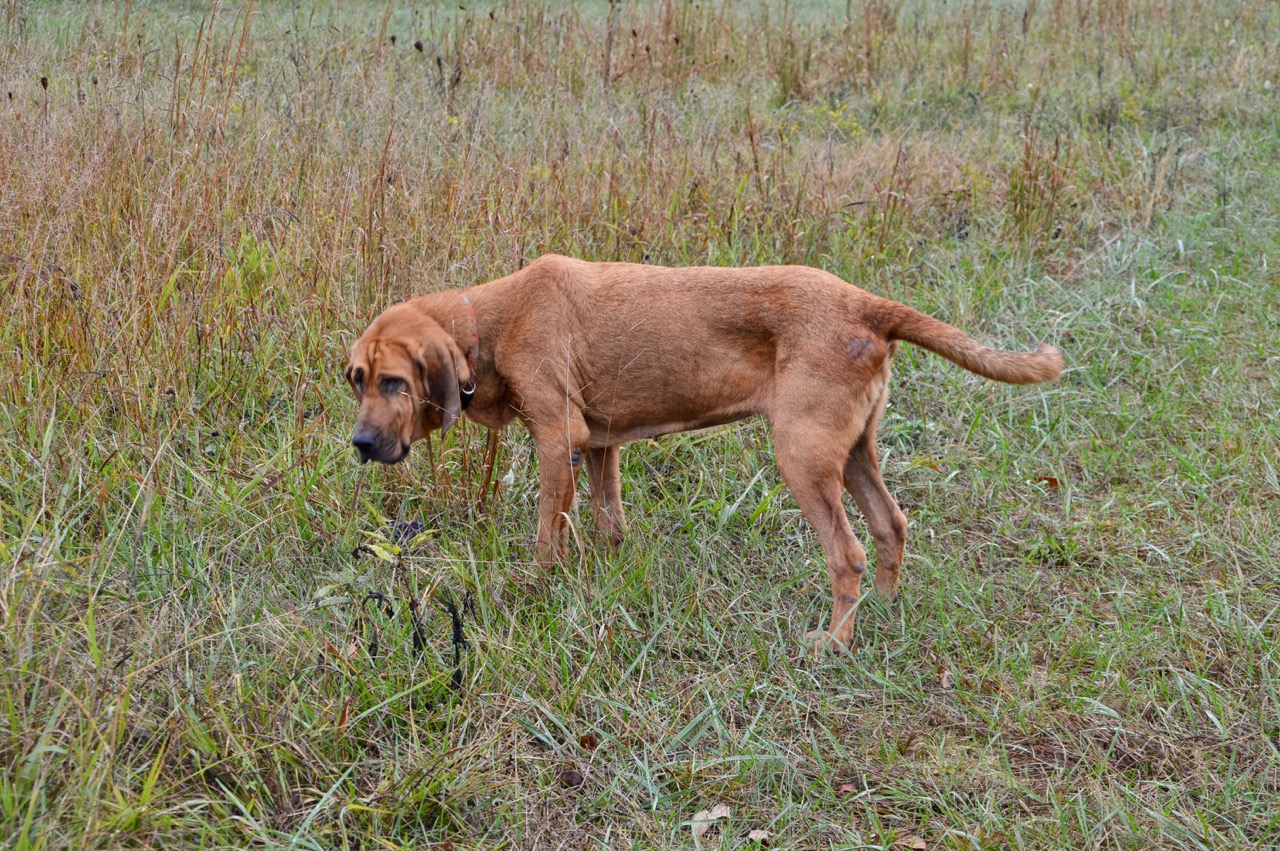 My camera was barely able to catch the high speed ATV on Friday afternoon but this gives you an idea of who and what has made the new worn paths that may be a thing of the future next spring and summer. We cut our walk short when we heard the sound as I can't afford an accident to happen with the hounds and a speeding ATV. Especially since Stella and Sadie show an interest in chasing that new unidentified vehicle. 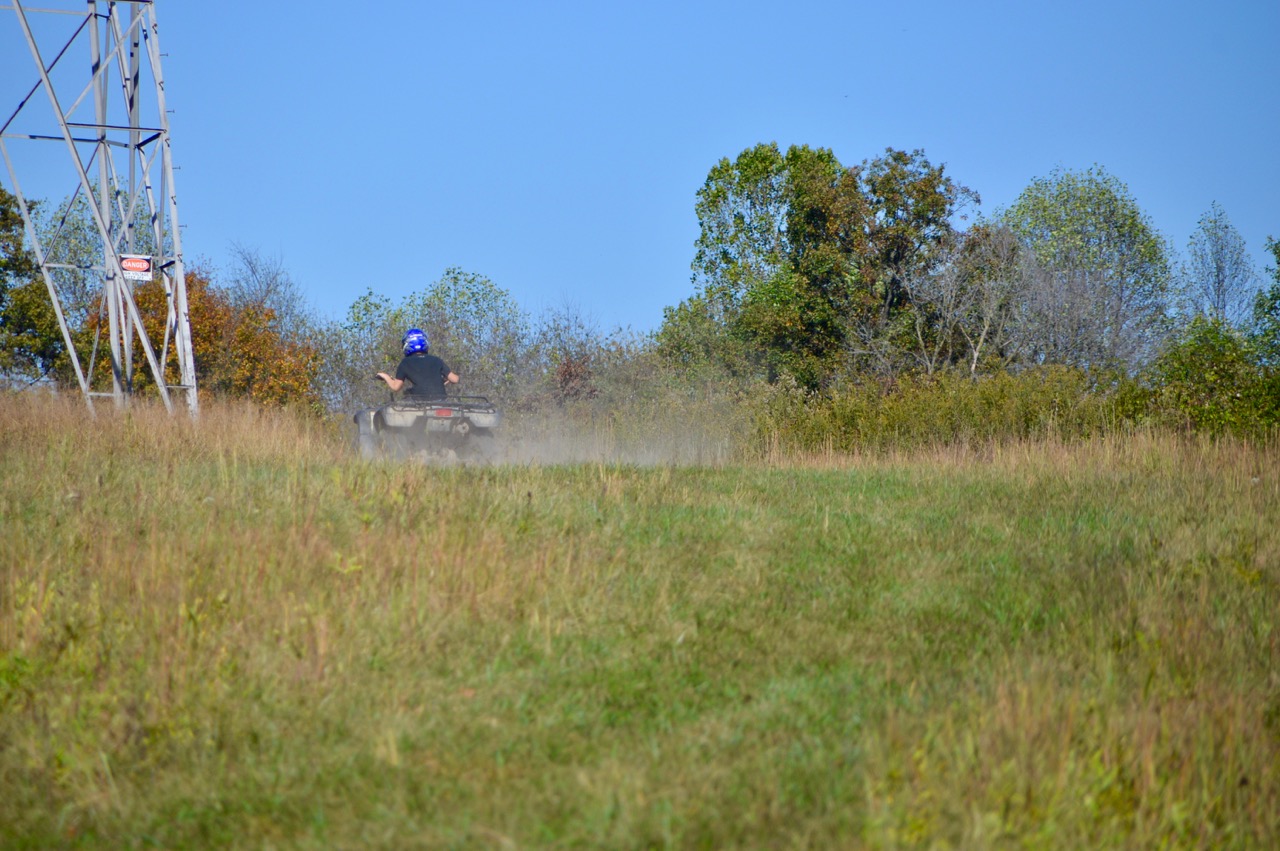 This morning though as the rain increased they were just happy to jog to the house with a few stops in between. 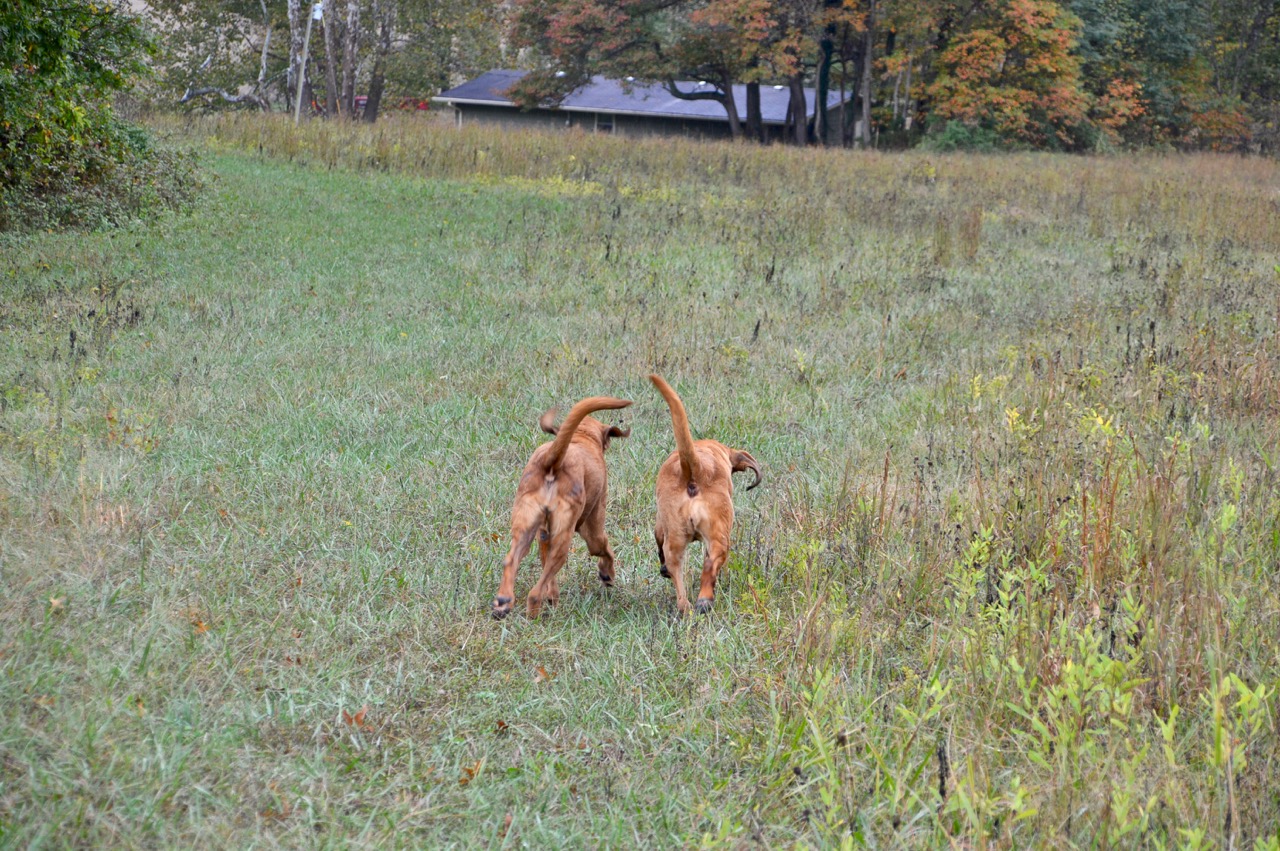 I wouldn't have taken a picture of my boot and this leaf until I saw how bright and colorful the leaf was. It might have the most color we see this fall unless we get a string of days with bright sunshine. 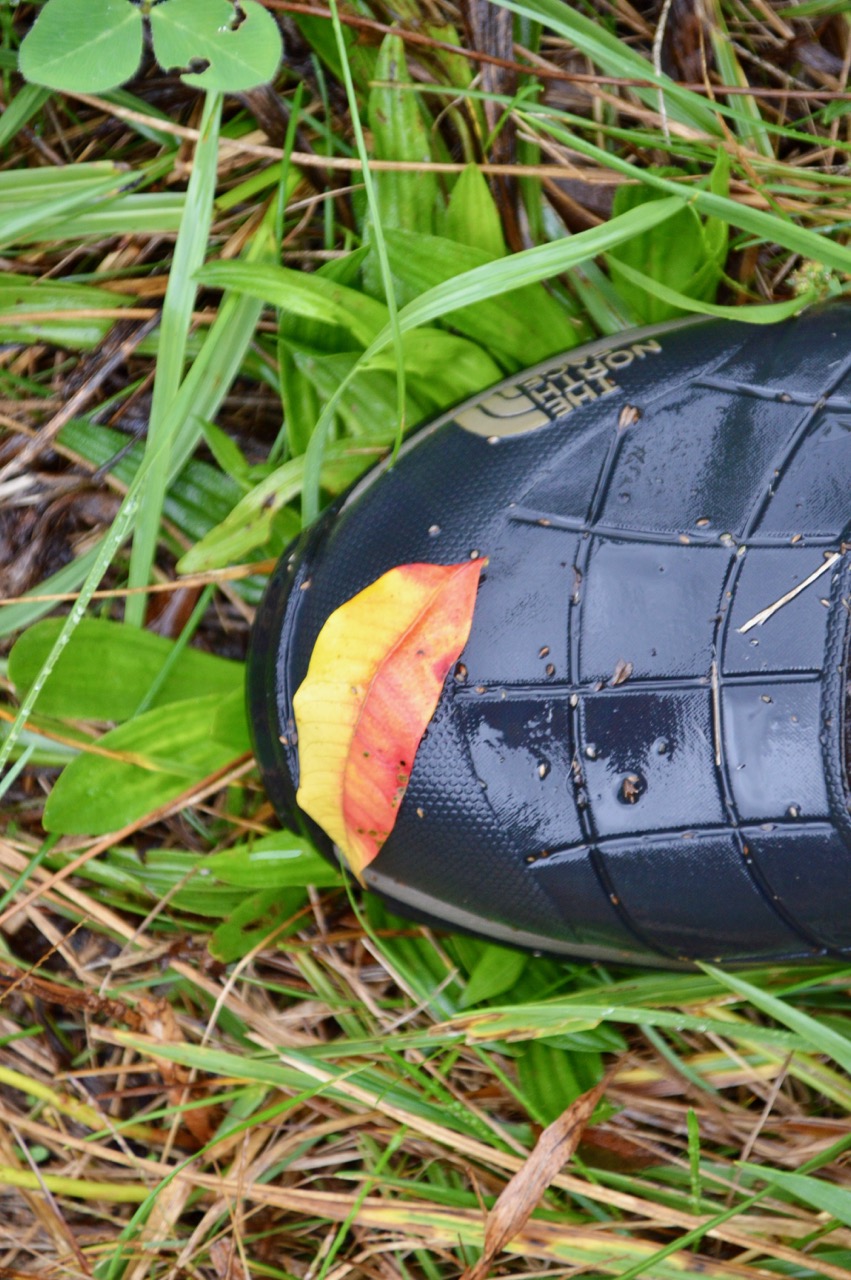 As the sound of the rain hit my jacket, Stella walked slower toward me in no hurry. Then looks at me as if to question why am I trying to get her to walk faster. 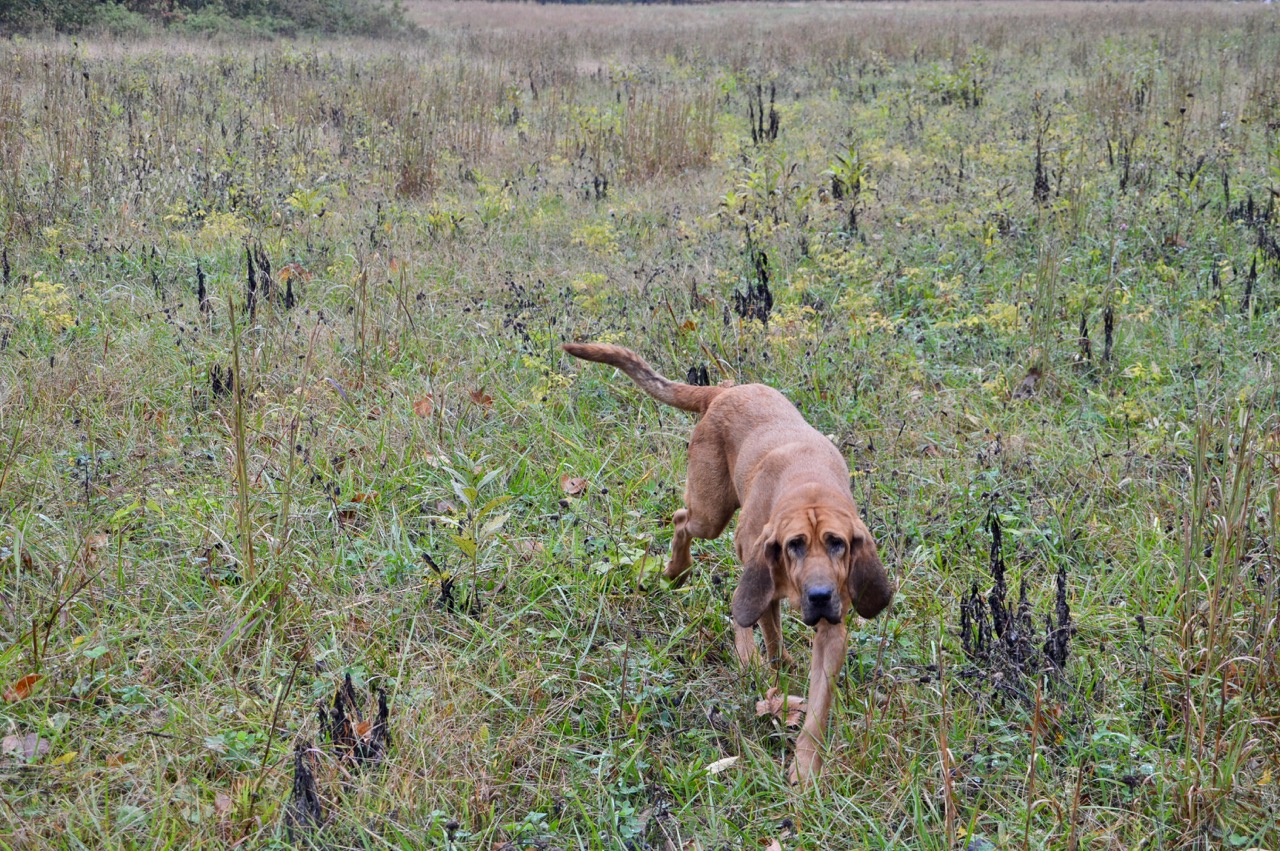 It's because these clouds are west of us, coming our way and the rain drops are now starting to fall faster. 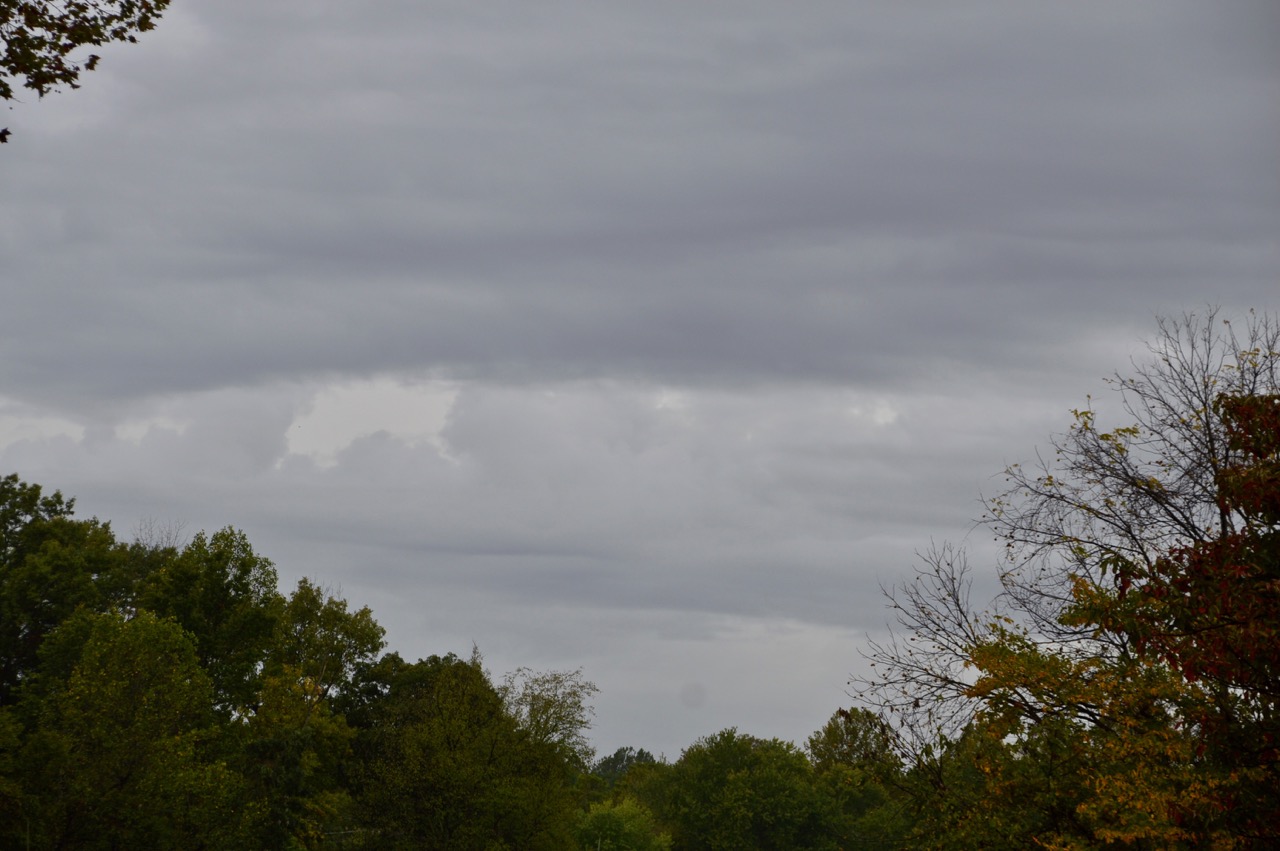 Sadie was also walking slow not wanting her walk to end. Yet, within minutes of returning inside, she was sound asleep protecting her water bowl from Stella sneaking in and drinking 'her' water. Stella and Heidi share their own water bowl in a different room. 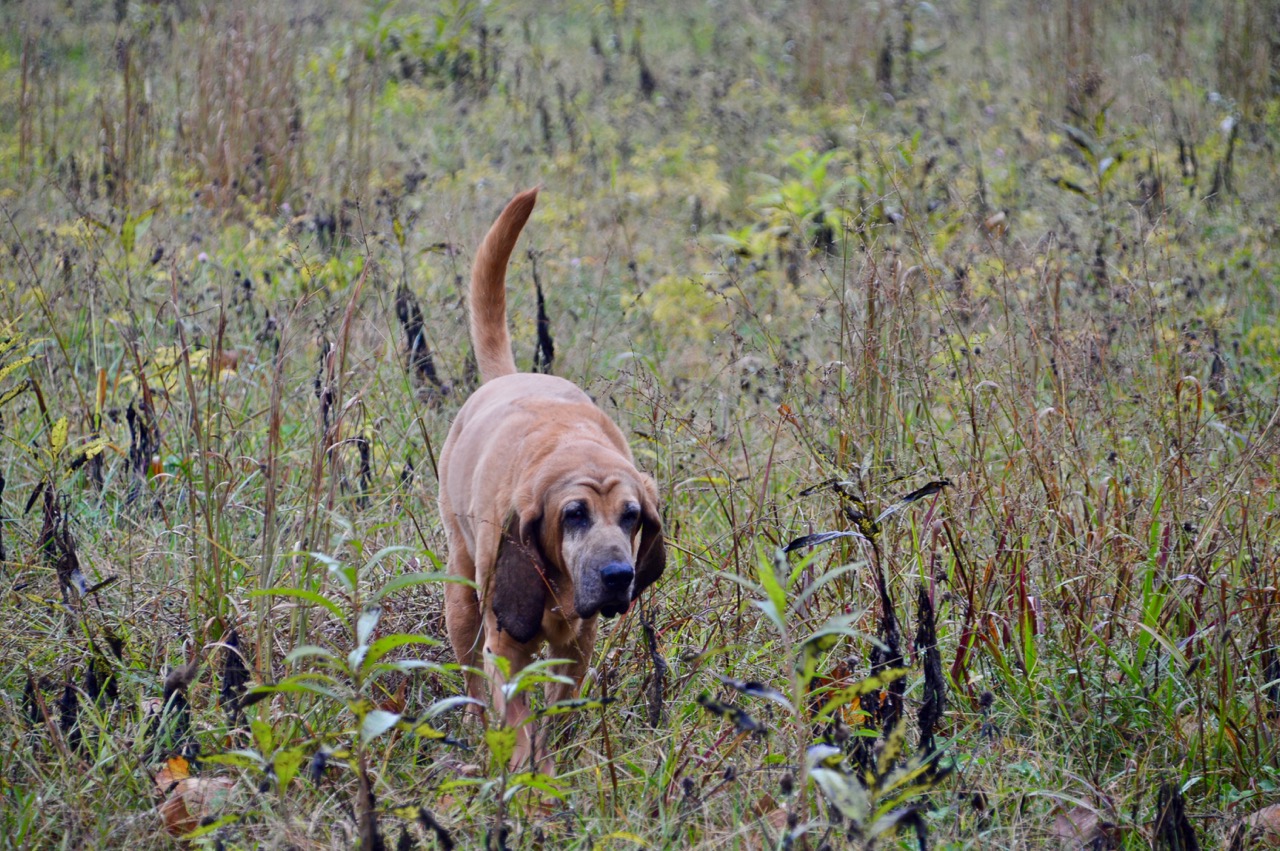 It's very very rare when both hounds lead me back to the yard at the end of the walk so I had to take a picture of this historic event. 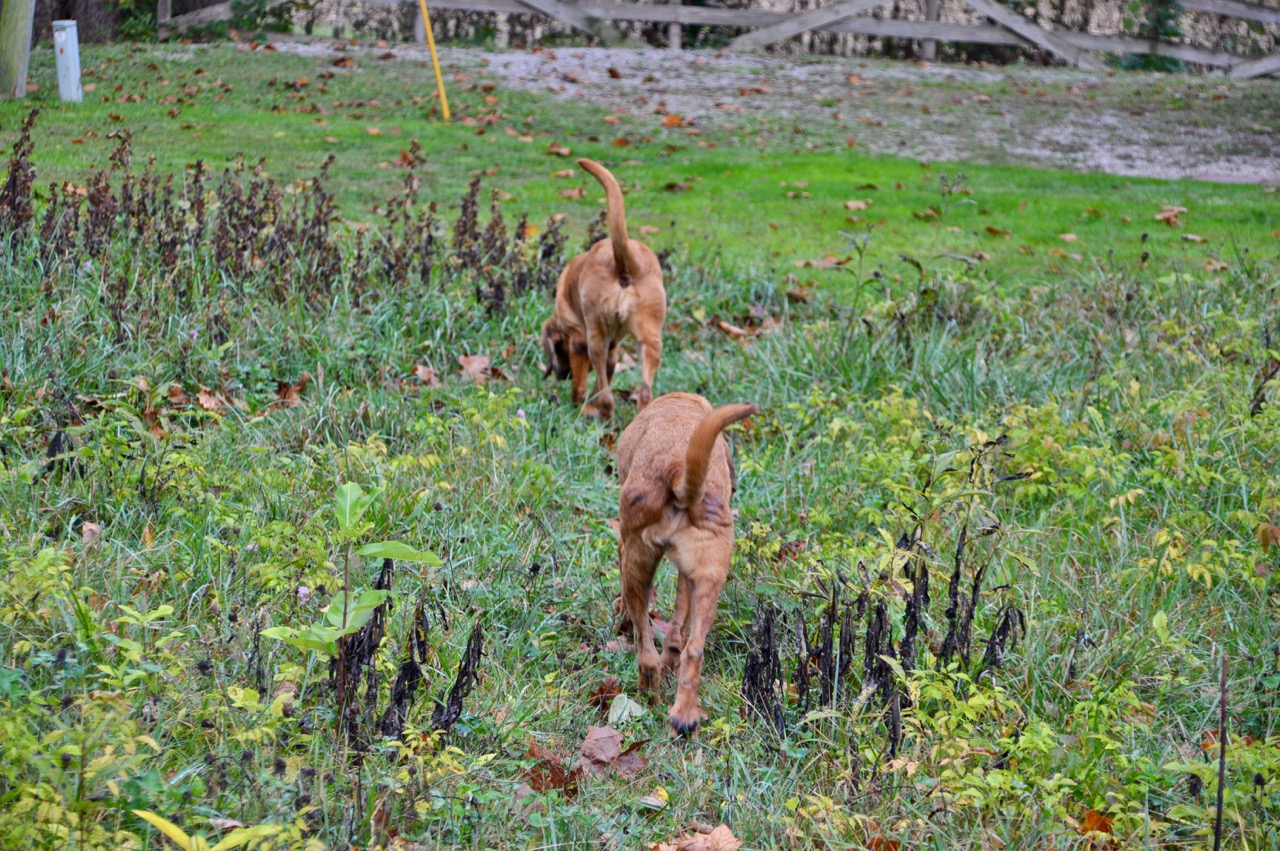 It's feeling like a quiet Sunday is ahead of us with a few NFL games scattered around a siesta later this afternoon, a couple more hounds walks and food. I might even read my owners manual on the Tamron 18mm-200mm lens I use to see what I have forgot or to find something I have missed with hopes of better quality photos in the future.

Hard to believe it's the middle of October here in 'the tropics' of Southern Indiana.
at October 15, 2017