The Hounds Were Active This Morning 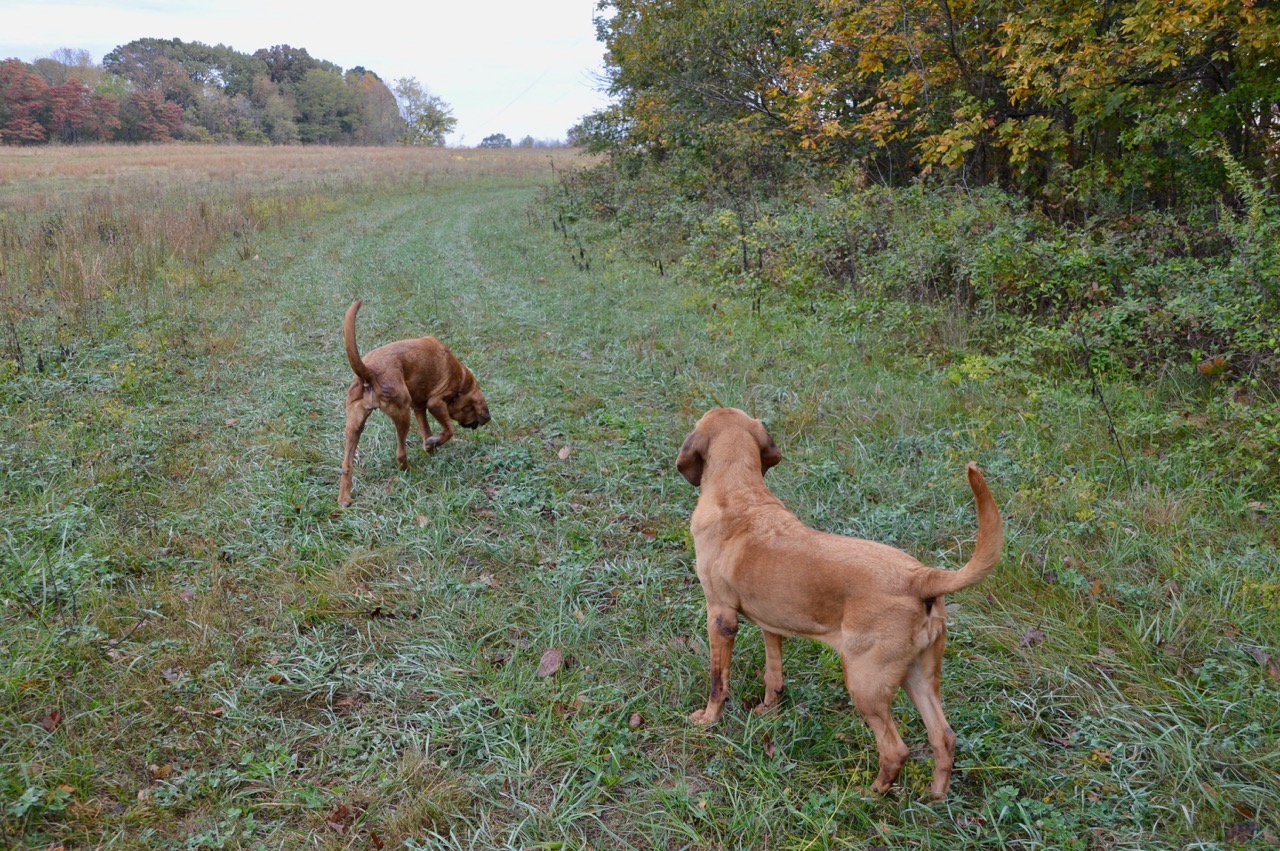 Weather Underground is telling me we have only two more days of highs in the 70's. By Tuesday we will be back in the 50's and 60's and the toughest decisions of the day will be whether to keep wearing shorts or change to jeans. As you can see, we have some new truck tire prints on the path this morning ... visitors last night were all over the field in a pickup truck and a speeding ATV.

It looked like someone was either getting driving lessons in the truck or the chance to drive without a license ... which is normal around here in a farming community. With that traffic stirring up all kinds of scents ... Sadie and Stella had a "field day" this morning.

All that beautiful sunshine yesterday was hiding behind some clouds this morning. It felt like rain could be on the way, but that is not scheduled until Sunday night. This year has not been a good year in my location at least, for weather forecast accuracy. We will see what happens with clear gutters and a lawn that is mowed. 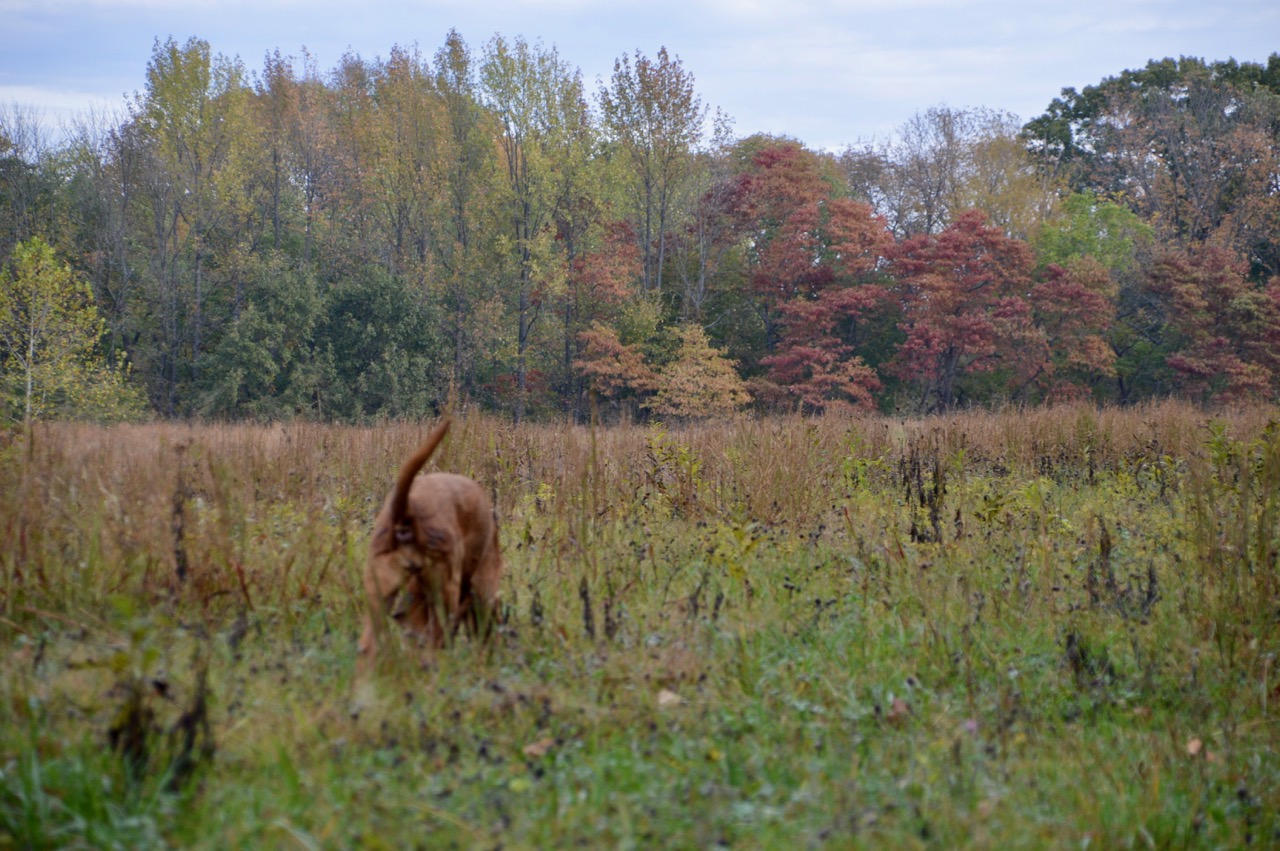 The air had a slight touch of smoke this morning. I am not the only one burning stuff around here and the campfire last night, next door, lasted well past midnight so that fall smell of smoke is a common occurrence. With Stella showing some energy early this morning and Sadie doing her normal darting from one scent to another I could tell they were going to be pretty busy on the walk. I kept my eye out for deer just in case. 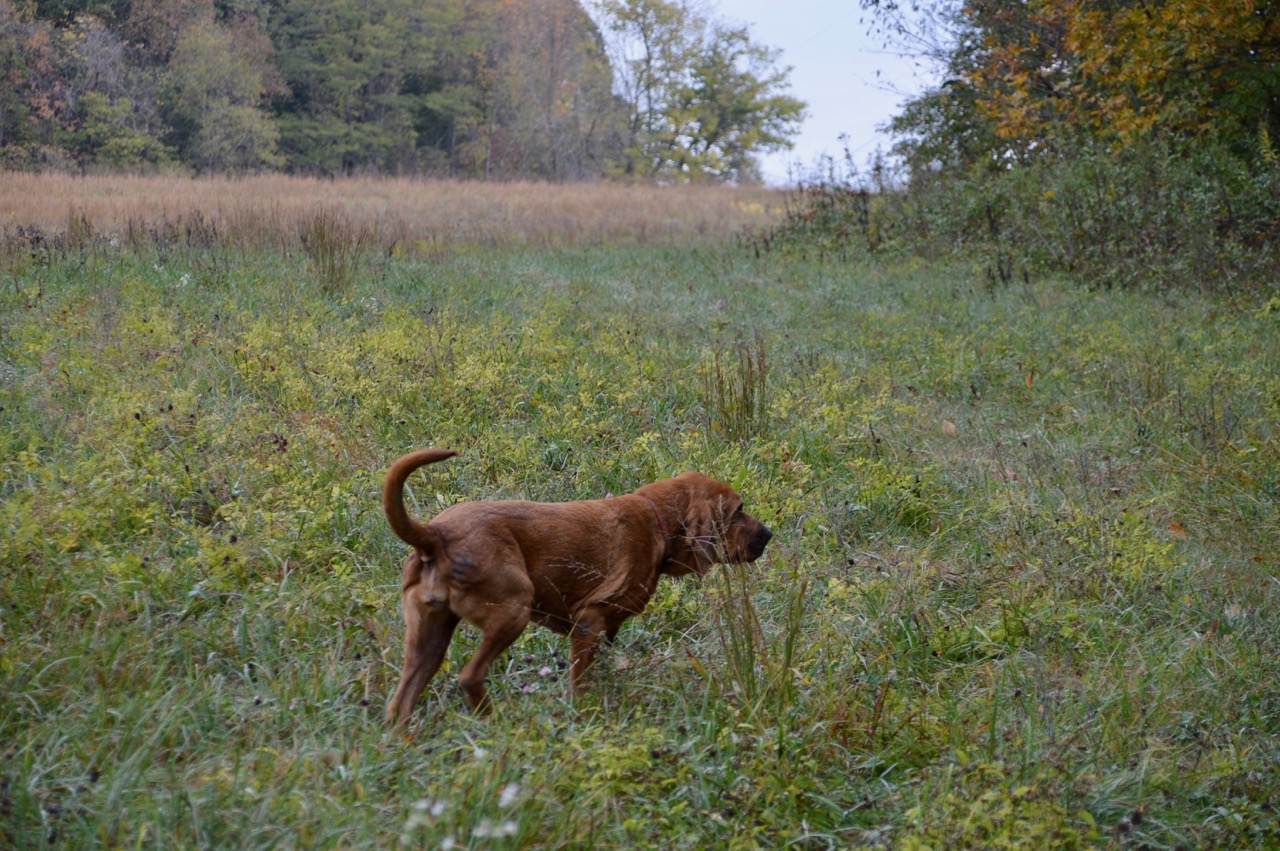 When they suddenly stopped their jog at the first time, almost in unison, I knew something was up ... they were serious this morning and were definitely going to catch anything they could find that had been trespassing. They 'think' they own this field just like the Bloodhound Laws state at the top of this blog. Yet it is owned by a neighbor that doesn't care what we do in the field except catching it on fire like he did years ago. 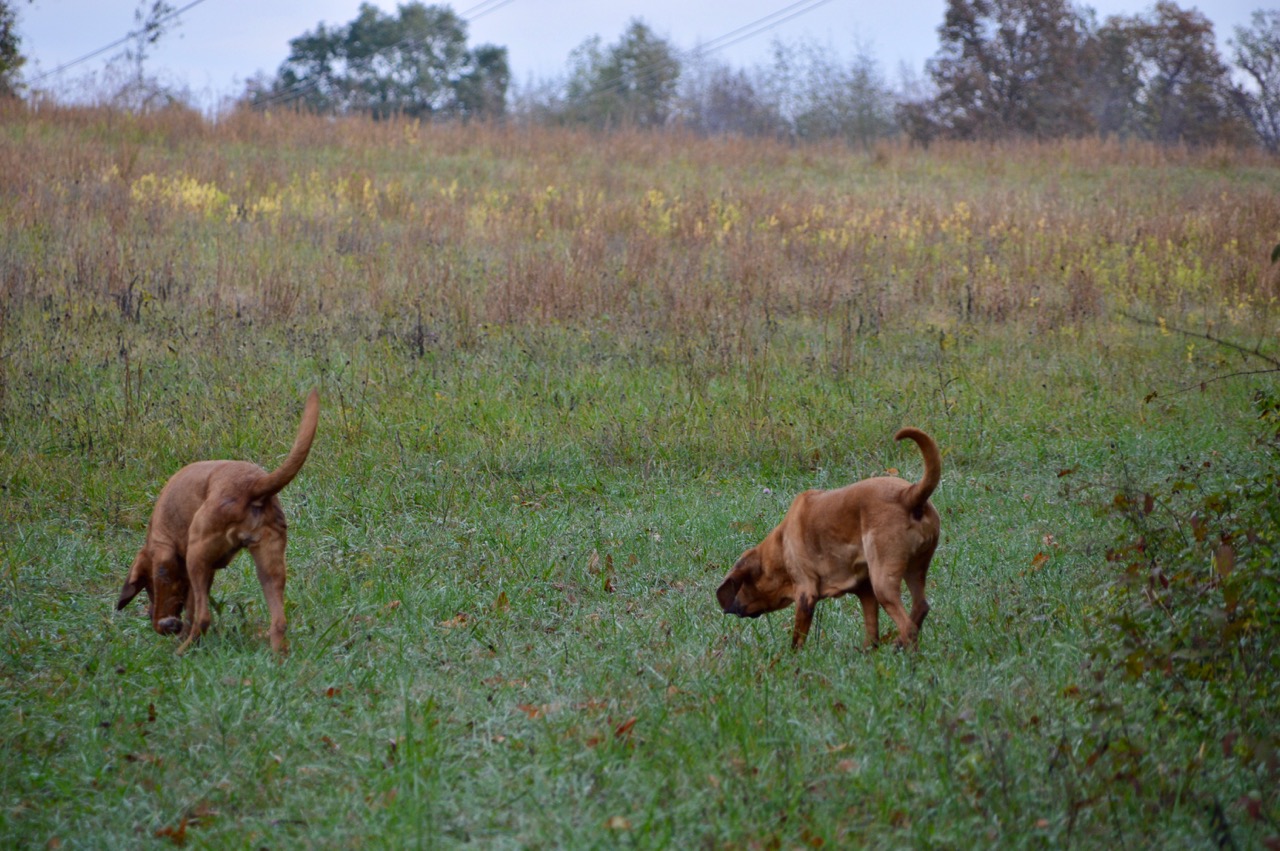 The hounds went from noses to the ground to an all out sprint to the middle of the field, including Stella. I saw no signs of deer anywhere but I thought they both were headed for the woods to the north and had 'seen' something I had not. I wasn't running yet and hoped I didn't have to. After my productive day yesterday there are a few unknown muscles feeling it today ... like soreness. 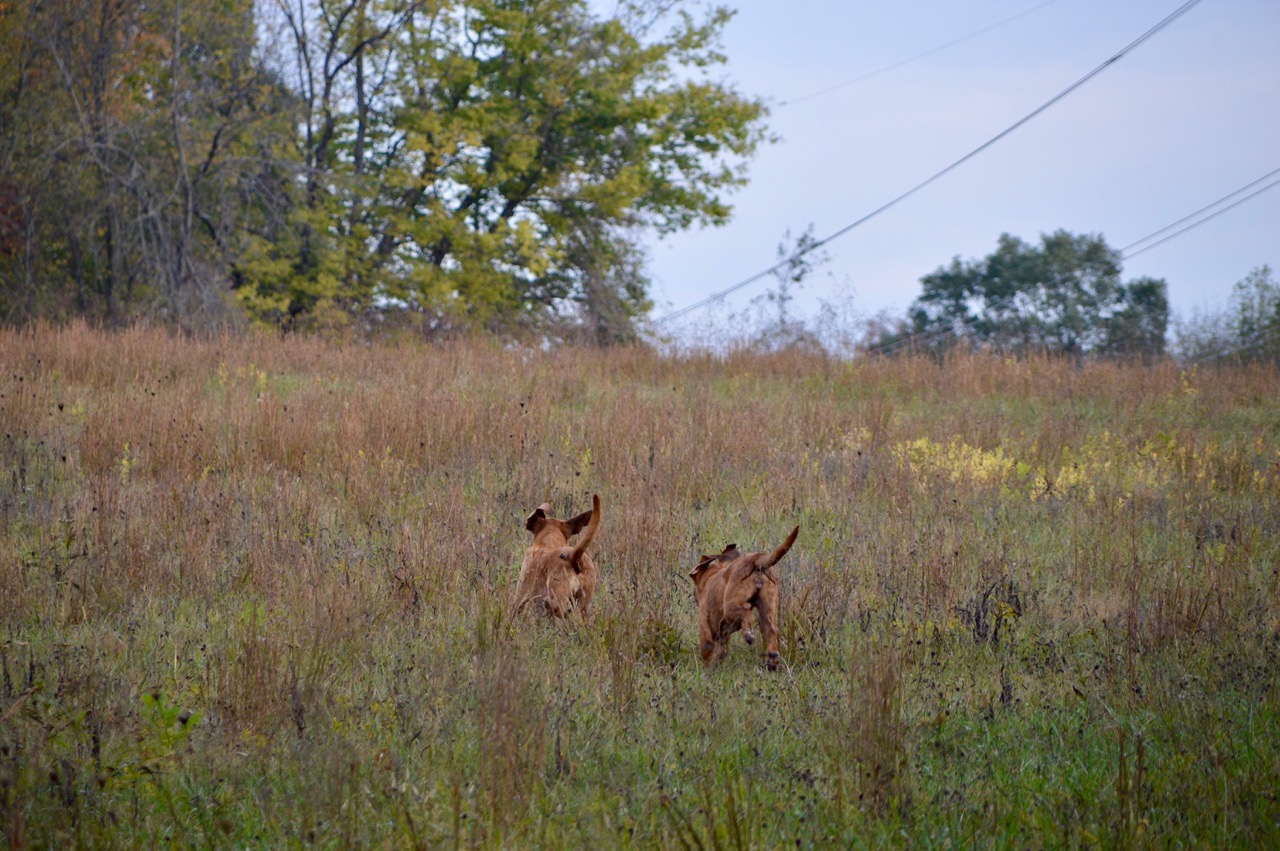 Could it be that one of the new truck tire tracks is what stopped them? That doesn't seem right by the way the took off sprinting. They are not really rabbit hunters like Heidi is so that couldn't have been the reason. Whatever it was they both stopped as fast as they started their sprint. My 200mm lens could barely pick them up ... being a long way off I was happy to see them stop when they did 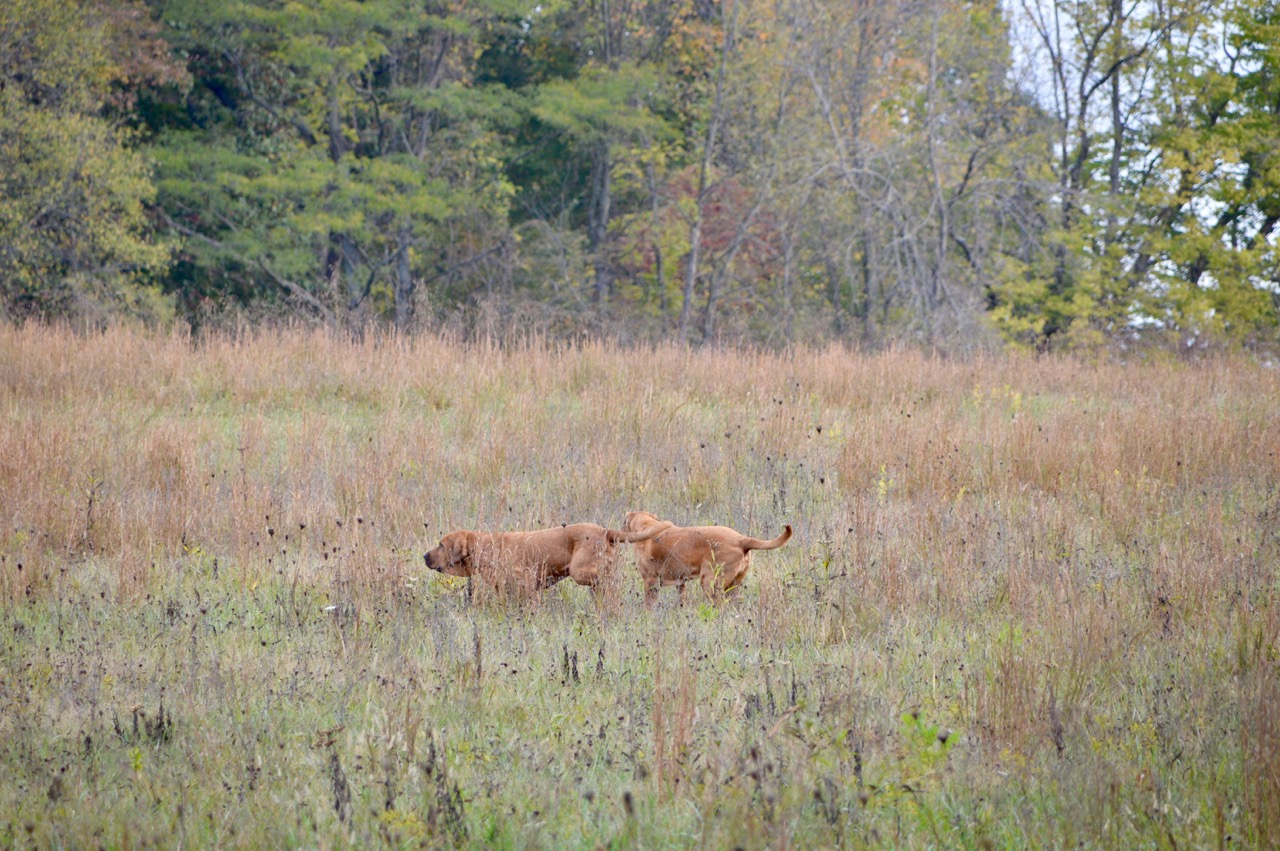 I yelled loudly "hey, over here" ... Sadie came sprinting to me as always ... Stella need more time to identify what they had found. 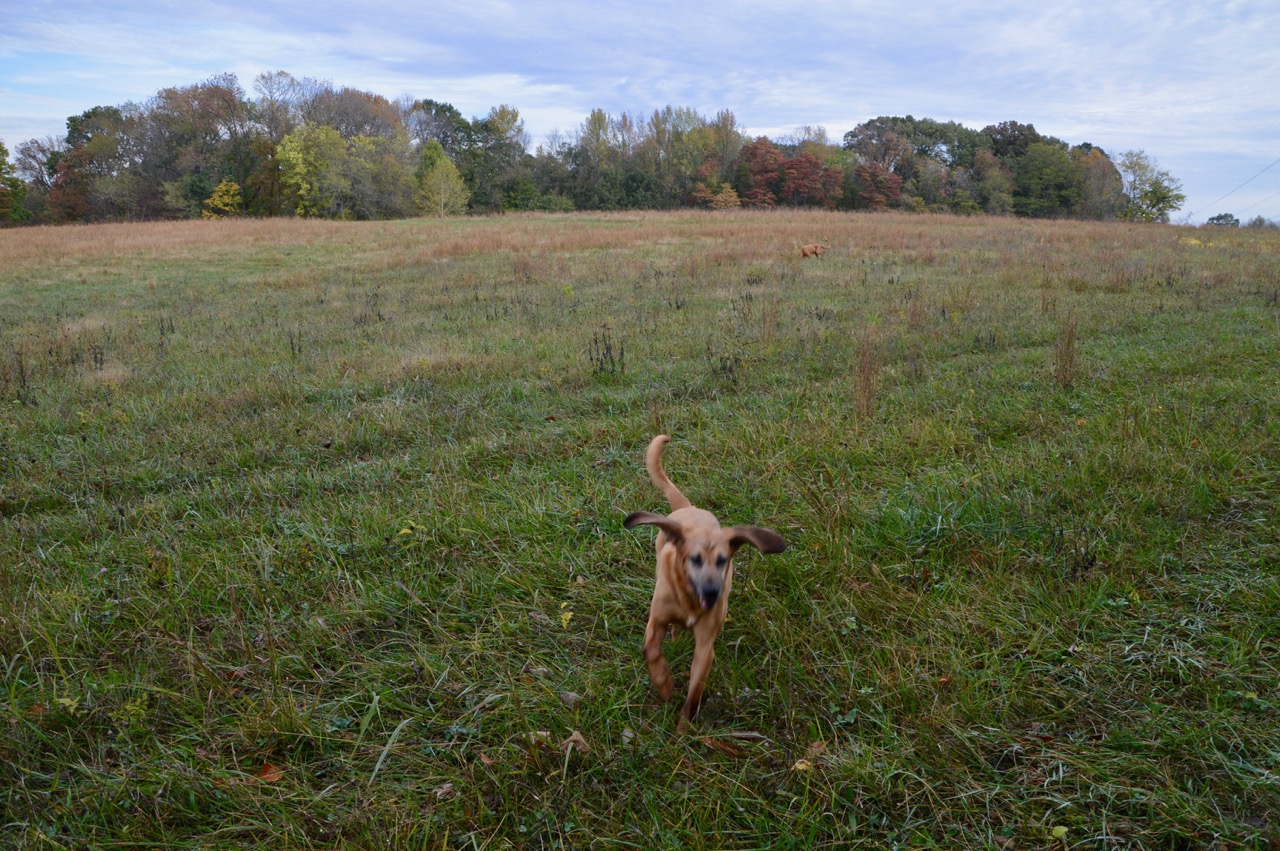 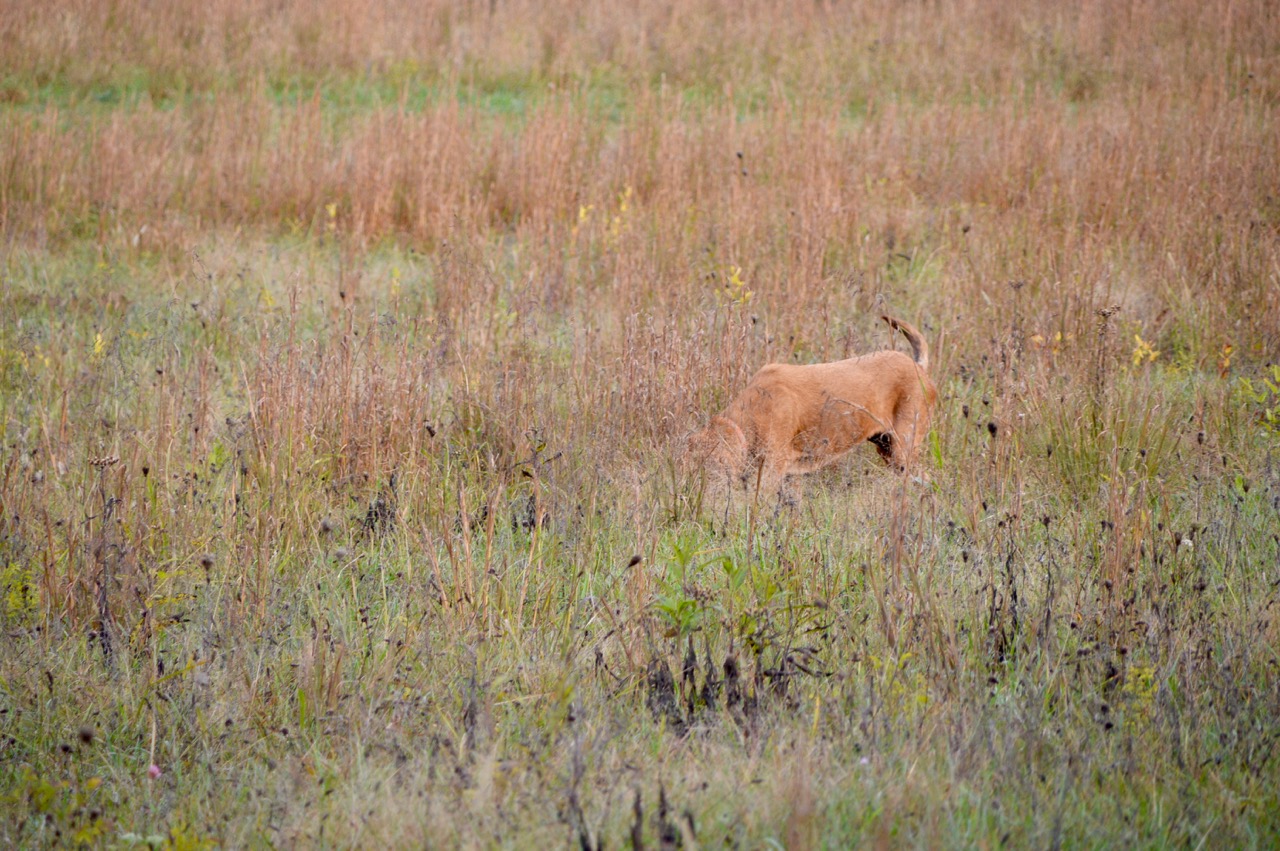 She decided she had enough and wanted to get back to Sadie and I ... without calling her ... here she came, running faster than she had in many months. 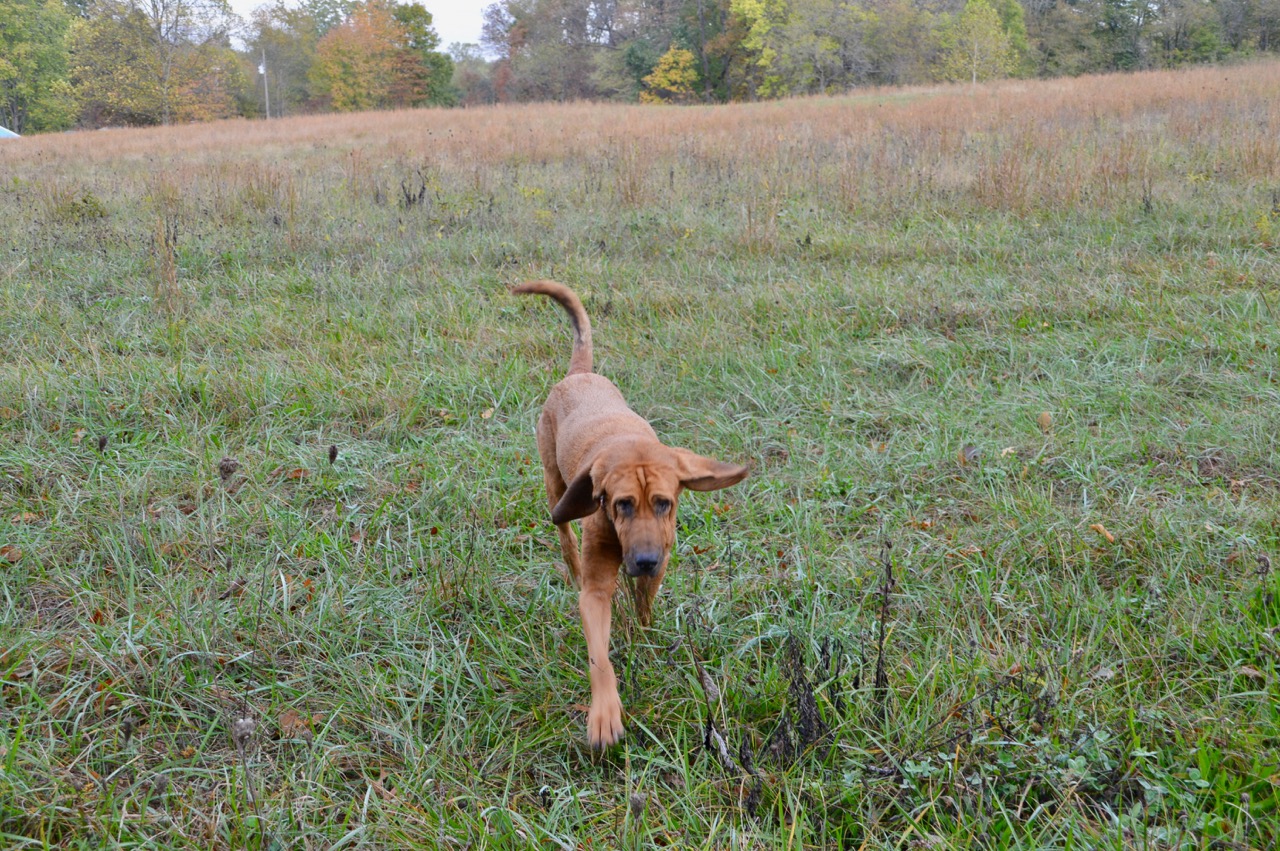 They both didn't hesitate in getting back on the task at hand ... search, and identify. 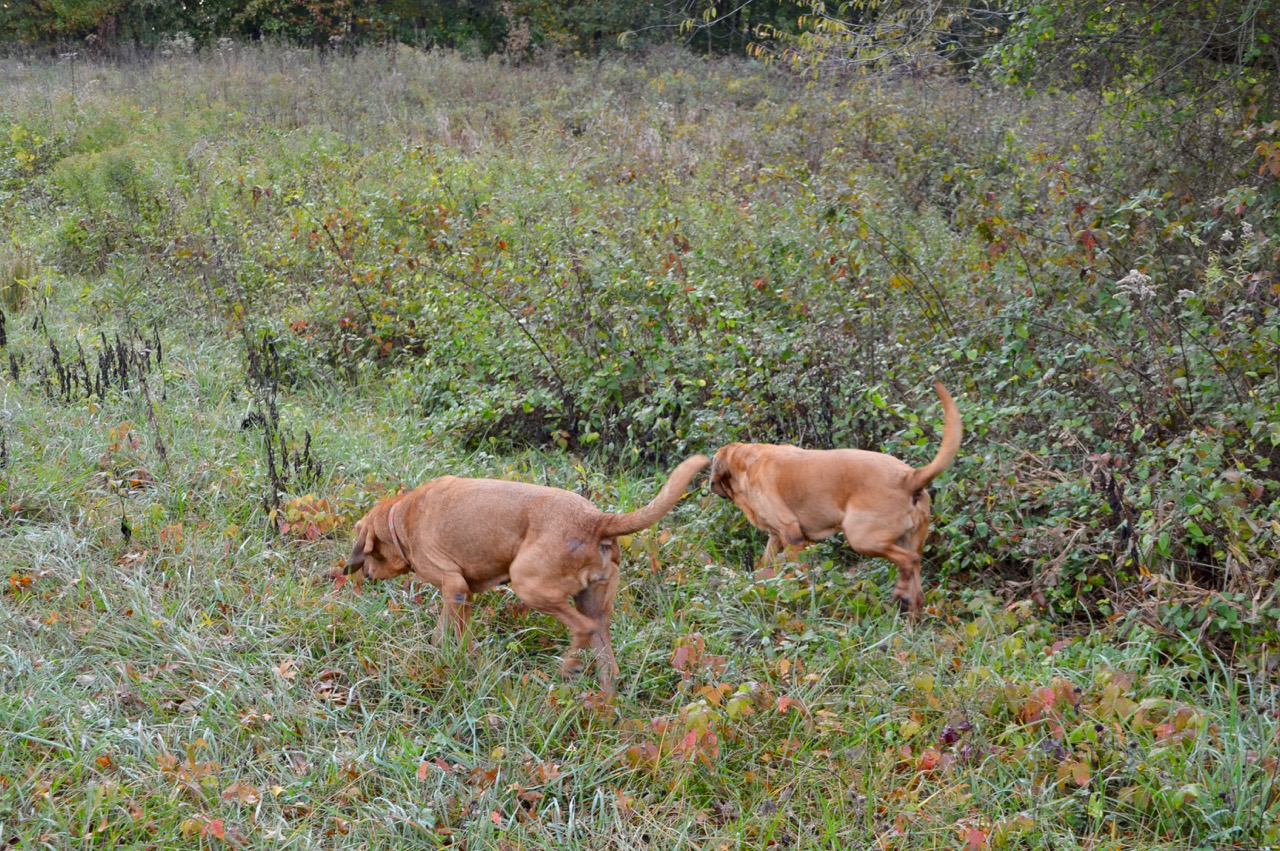 Am I correct thinking that these are a small saplings of some kind? All future trees in the field and so close together. This patch was right behind the hounds in the picture above. 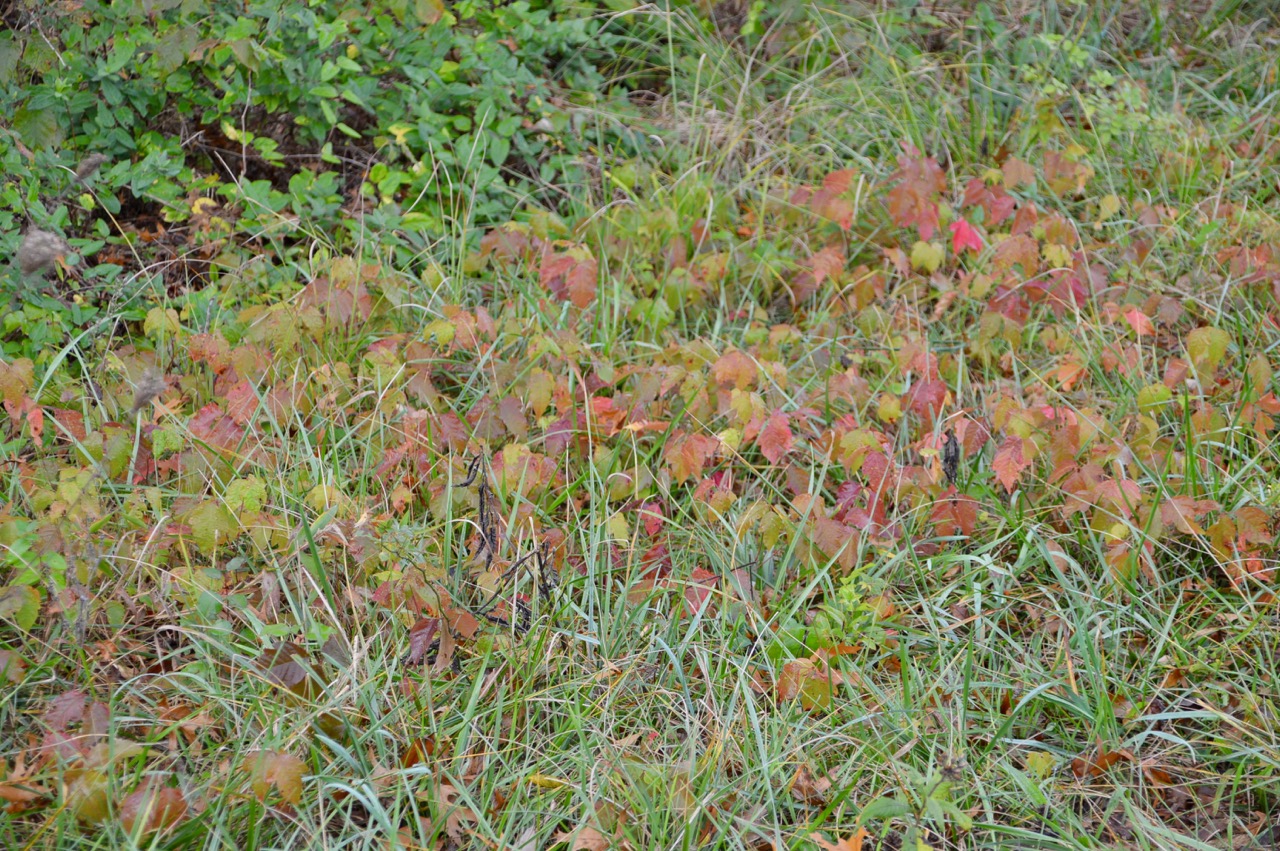 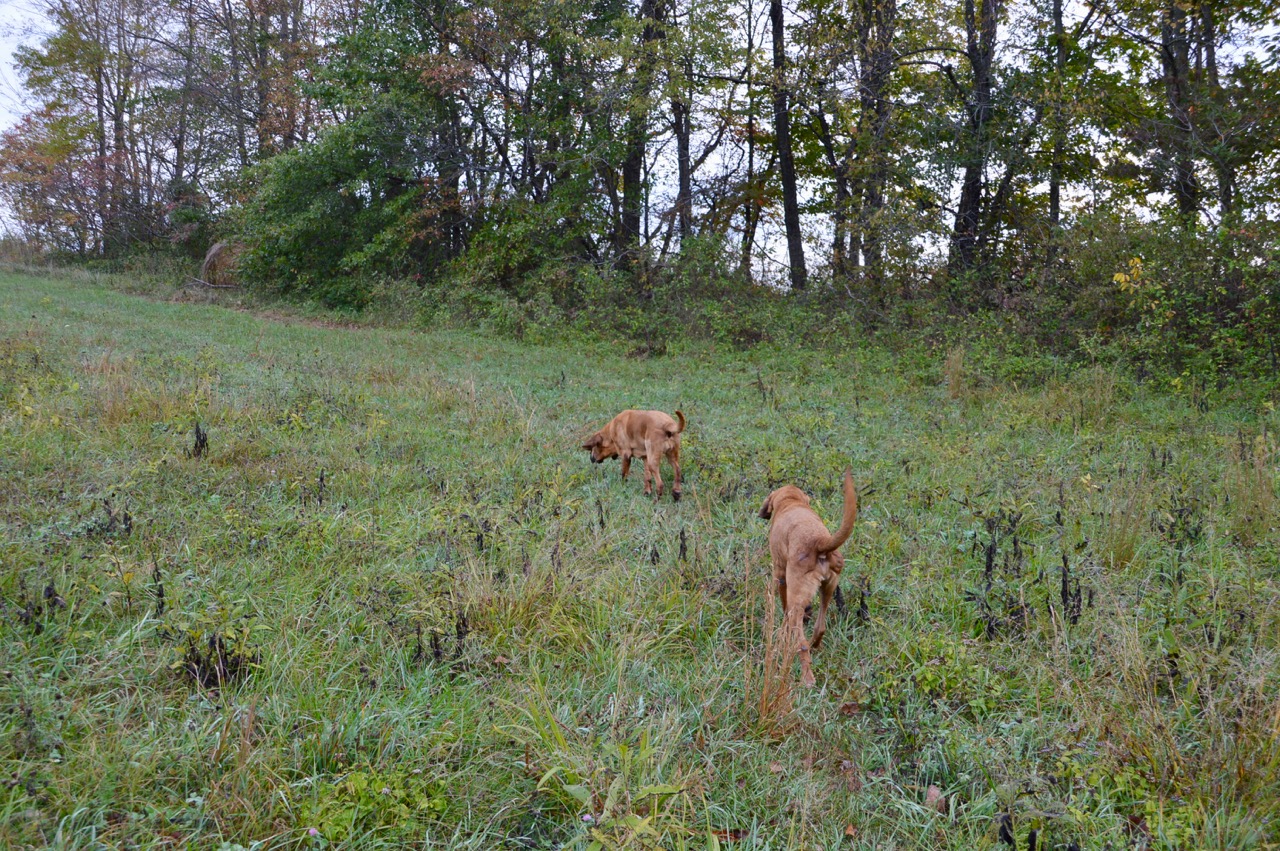 This is one of her favorite spots to stop and scratch ... if the rolls of hay were there, she would be just in front of them or up by our final turn home. 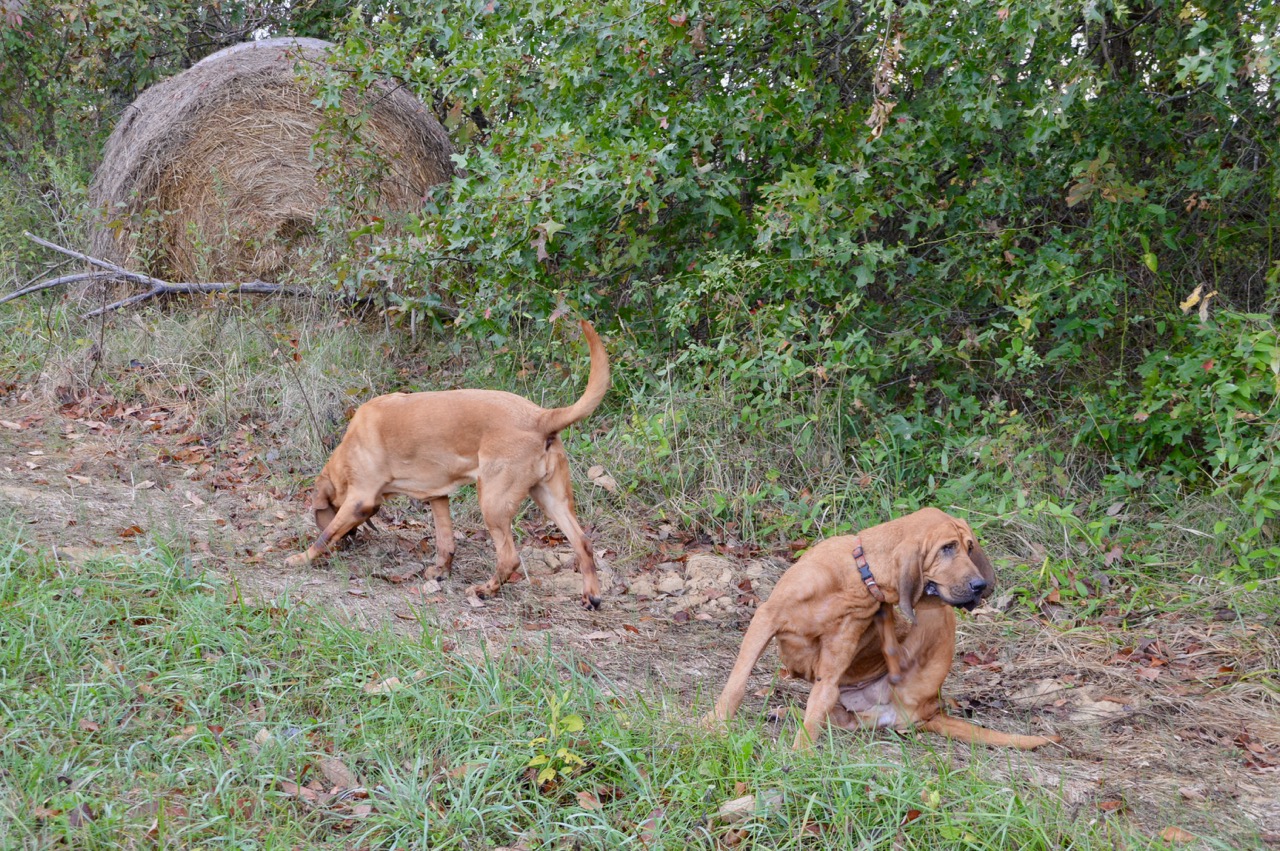 Since the back part of the field had been checked out, they both ran in the direction of the house again leaving me way behind. It's good that they can run off leash, something that many bloodhound owners have told me they would never do, no matter how big a field was. 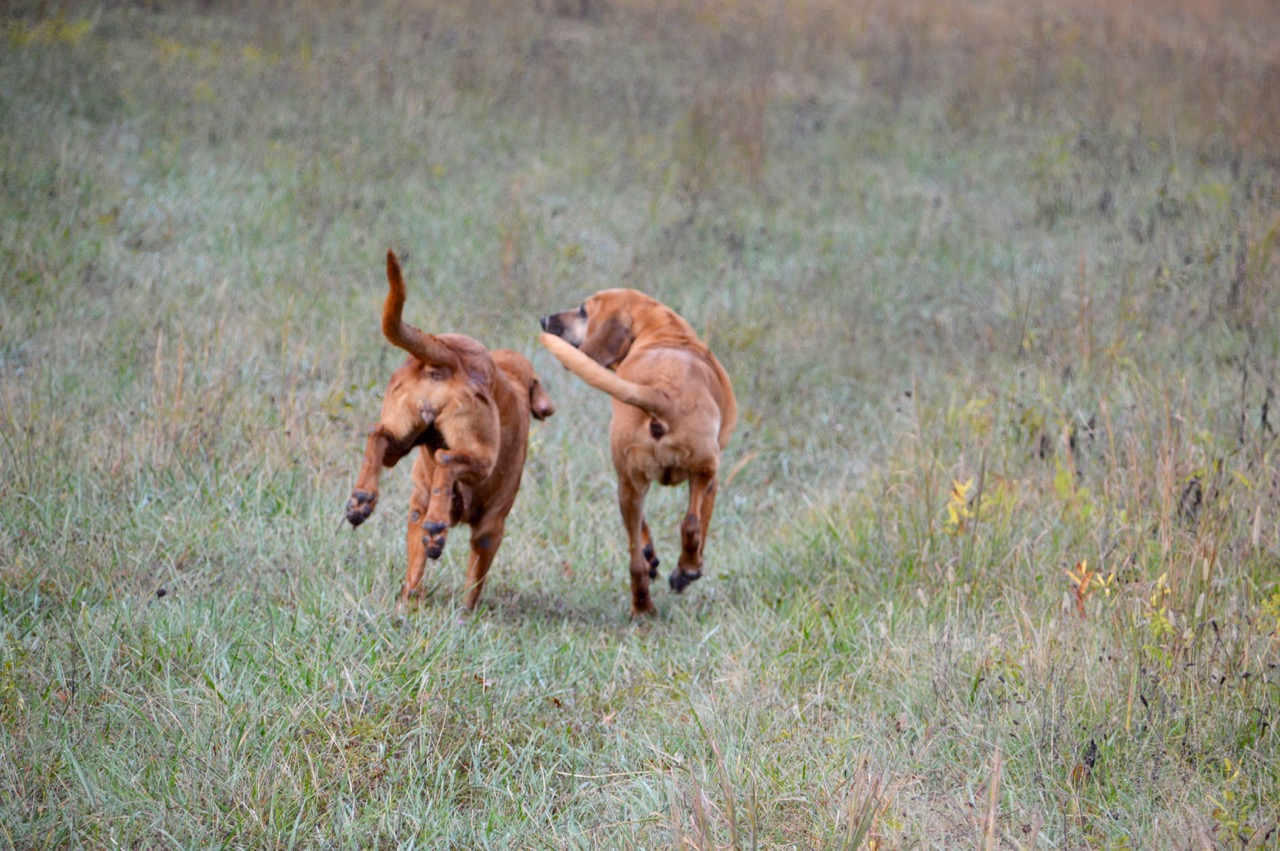 Luckily the alternate path home puts me pretty close to Stella on the right side of the picture. 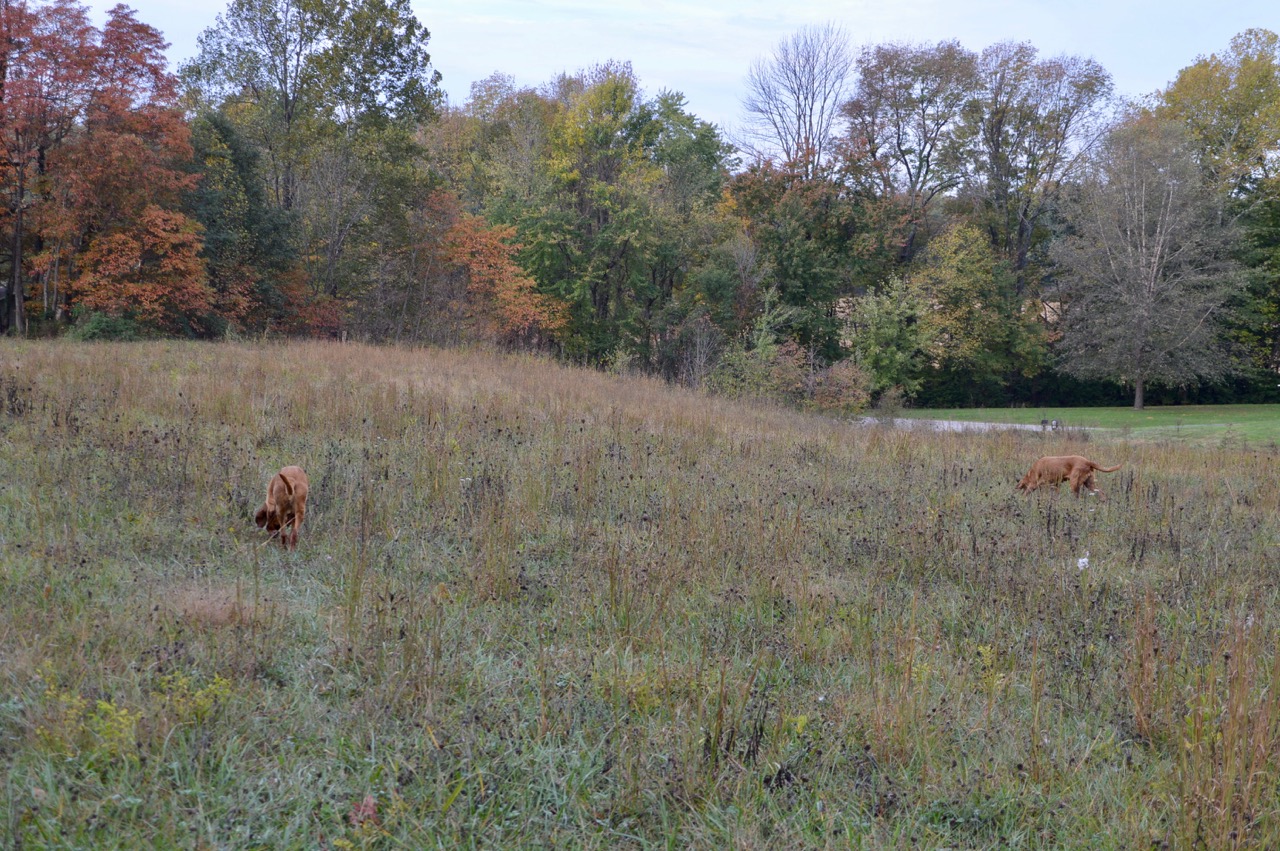 What I wouldn't give to find out what these two are thinking when they stop like this. 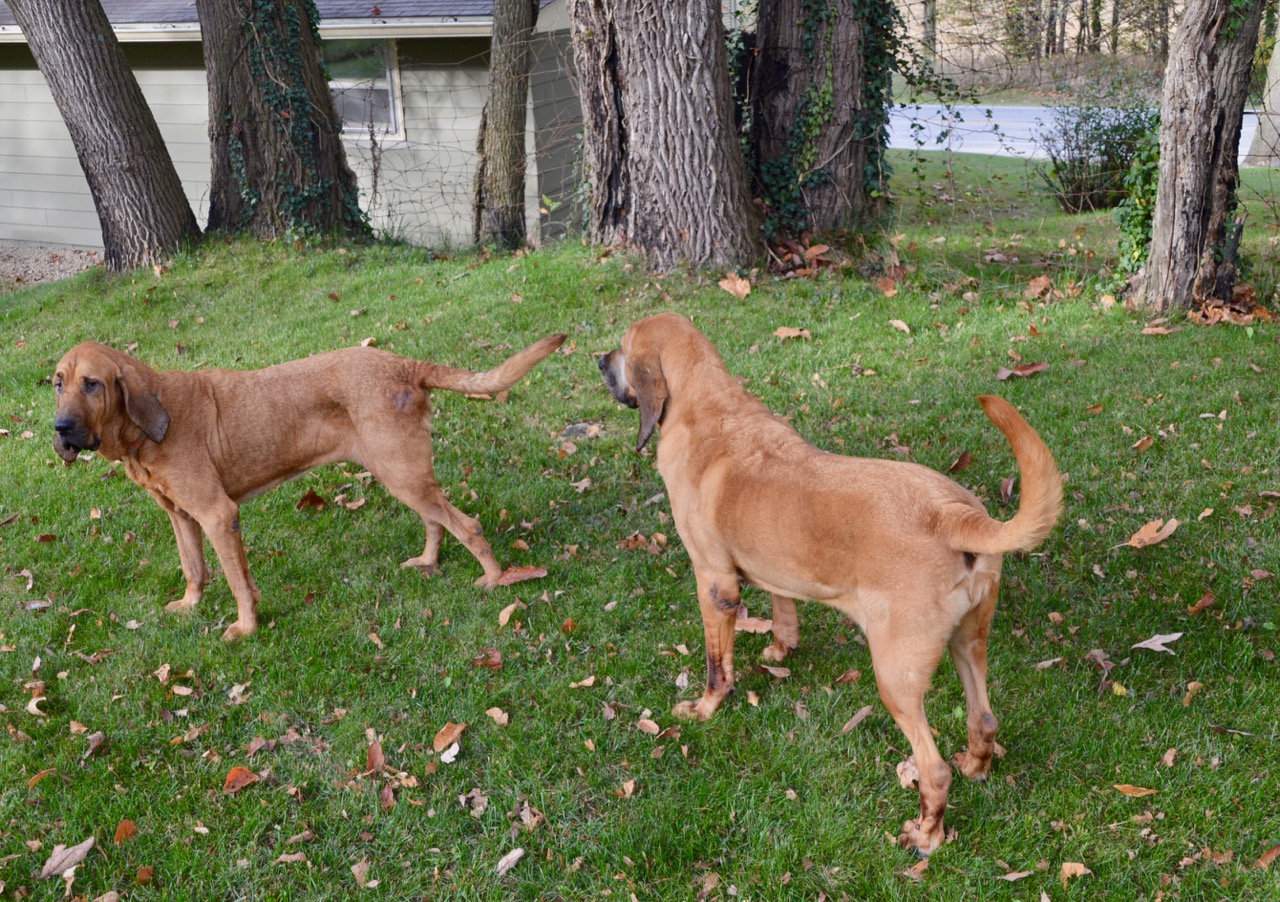 The bright colored leaves are few this year but right next to the yard. 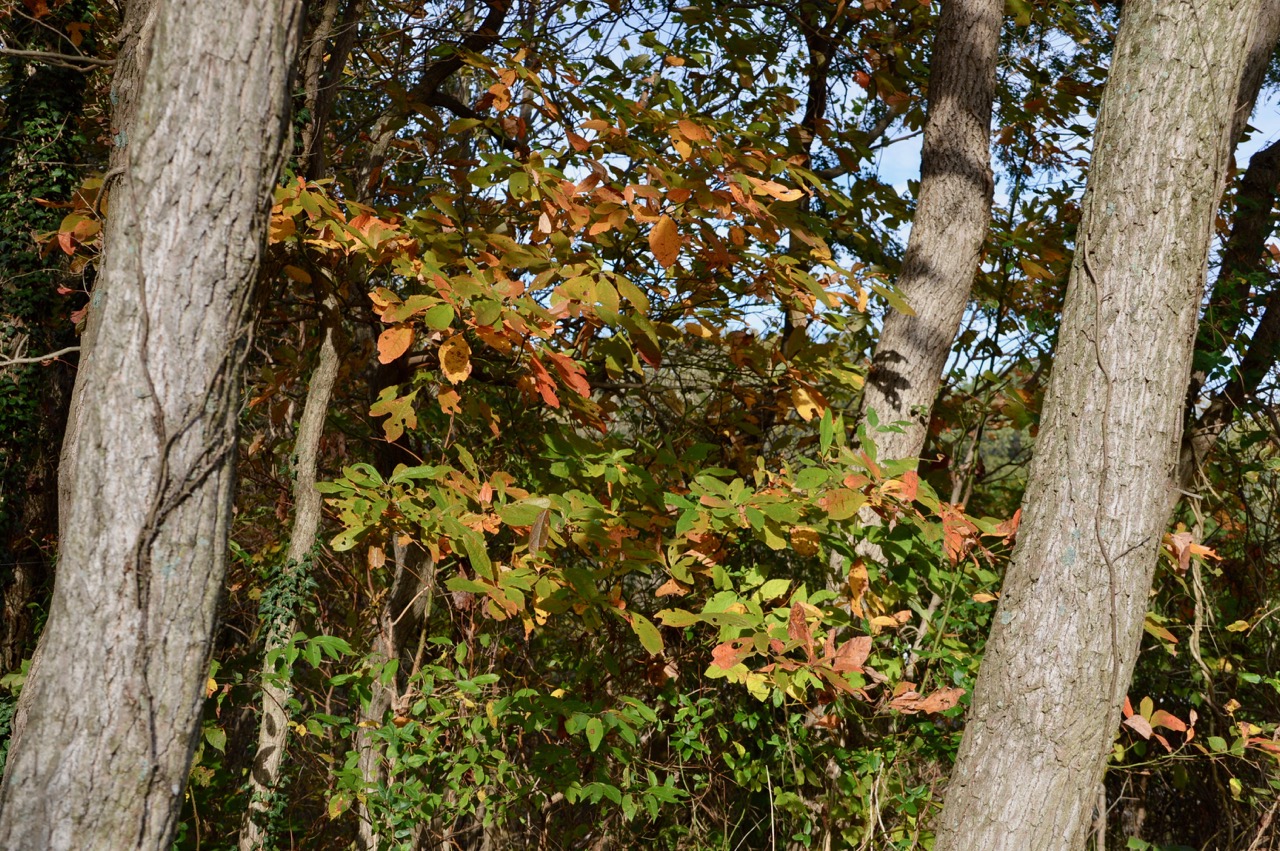 In early September my burn pile looked like this. A lot of those green weeds had died this past month. The taller ragweed on the left side out of the view of the photo has really died off. Ill not burn them but will do what I did last year ... cut them down with the mower. Jim was happy to have it cut but it gives Sadie a clear path into the woods. She liked doing that last winter. 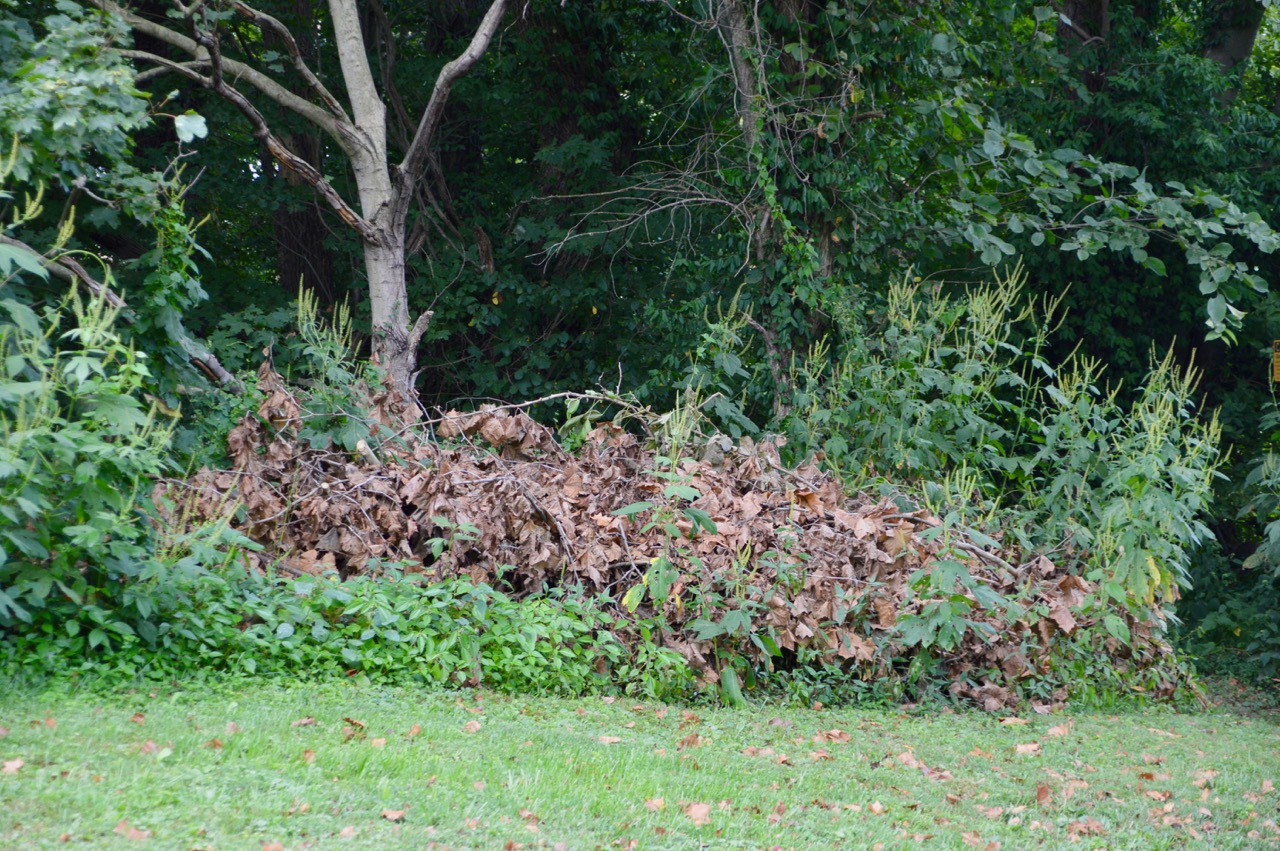 While taking the hounds out for their last trip of the night last night around 10:30pm I noticed one small ember in the pile of ashes. I walked over to check to see if anything else could spread while I slept.

So yesterday with some matches and help from a rake, that burn pile went from the picture above to the one below. Over the winter a new pile will start with fallen tree limbs from the high winds and the winter storms we get. There have been some years the burn pile has grown big enough by March or April that I have to burn again. 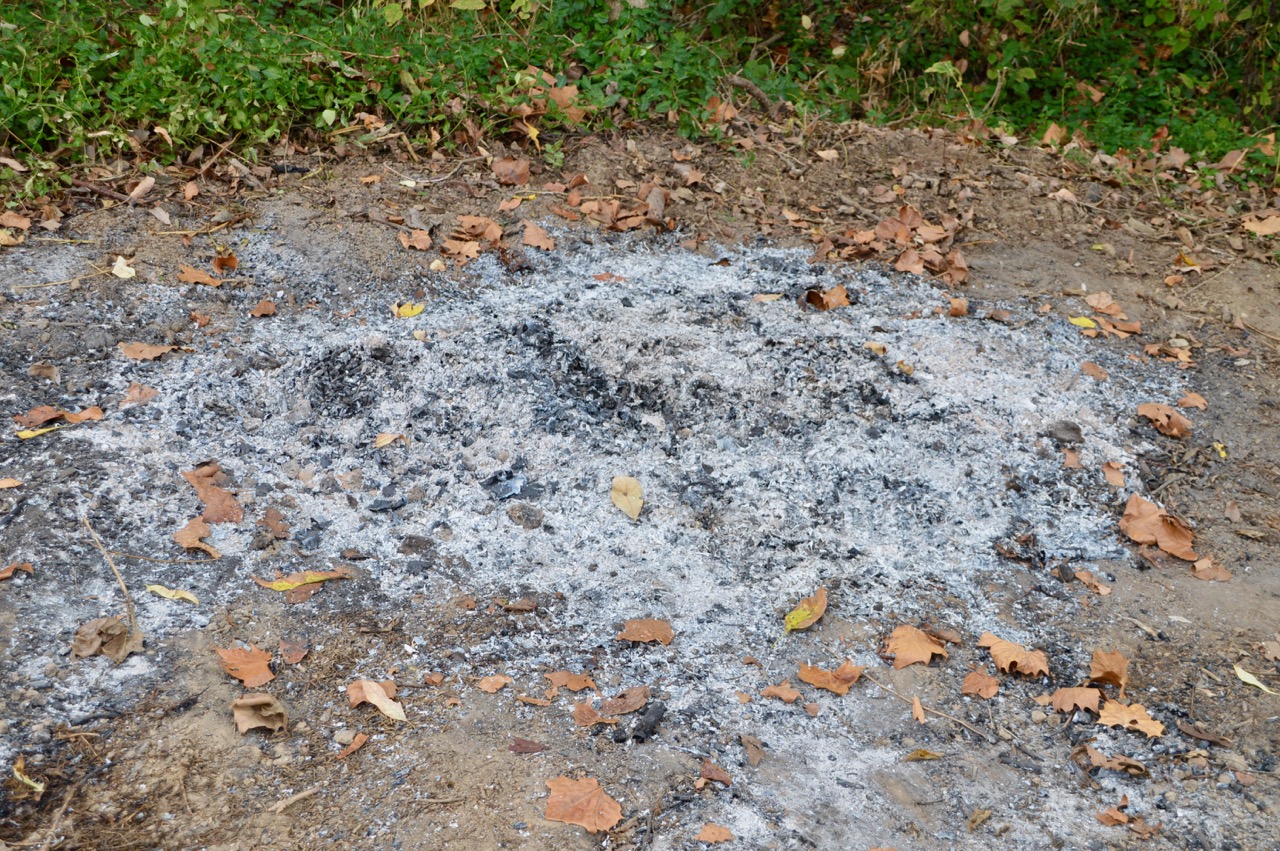 I doubt that I will have another blog post tonight. I start my weekly football marathon at noon and will finally turn off the tv and the lights around 2:30am, after the last west coast game is finished. The hounds will still get their 2 meals, 2-3 walks, same amounts of sleep in their normal places while I watch the games.

I am glad that Tom recommended the GarminVivoSmart watch last May. It is accurate and provides a lot of information ... at times too much info. It vibrates telling me to "move" if I have been at the computer too long or on the couch watching games. It can sort out my deep sleep from light sleep plus show me the times I get up during the night if I do. It will even tell me who is calling or sending me a text ... by name. If I forget to stop the timer after our walks, it will stop it for me later, then I can go into their app and edit the time and distance for that walk.

I bought it mostly for tracking my resting and active heart rate.

Not much else is going on this morning. It's cool with the windows open. Stella has spent the last hour licking her paws and legs dry ... she cannot stand leaving them wet after we do our morning walk. Sadie always lays by her water bowl protecting it as she sleeps until lunch is served. Heidi has not moved since breakfast, as usual.

Oh, I almost forgot ... I've added a few new blogs to the blog sidebar on the right. One has a basset hound where the title of her latest post was "Basset Hibernation" so Heidi is not the only basset that knows what time of year it was. I am slowly getting back to the 50 or more blogs I listed over the years here. It is the easiest way to see new posts by bloggers I follow but also gives blog readers a chance to read other blogs. I like the side bar more than I like them listed in my Feedly account.

The "labels" were changes yesterday to around 90 topics now in a list format instead of a cloud format. The times I have tested the search box in the upper right doesn't give me the accurate results as the Labels list does. Right after I post this I am changing the title from 'labels' to 'topics'.

I admit after almost two weeks (tomorrow) of blogging again, it's nice to be back blogging and taking photos.

It sure sounds quiet today, almost too quiet for a Saturday here in 'the tropics' of Southern Indiana.
at October 21, 2017