Hounds Test Winds From The NW 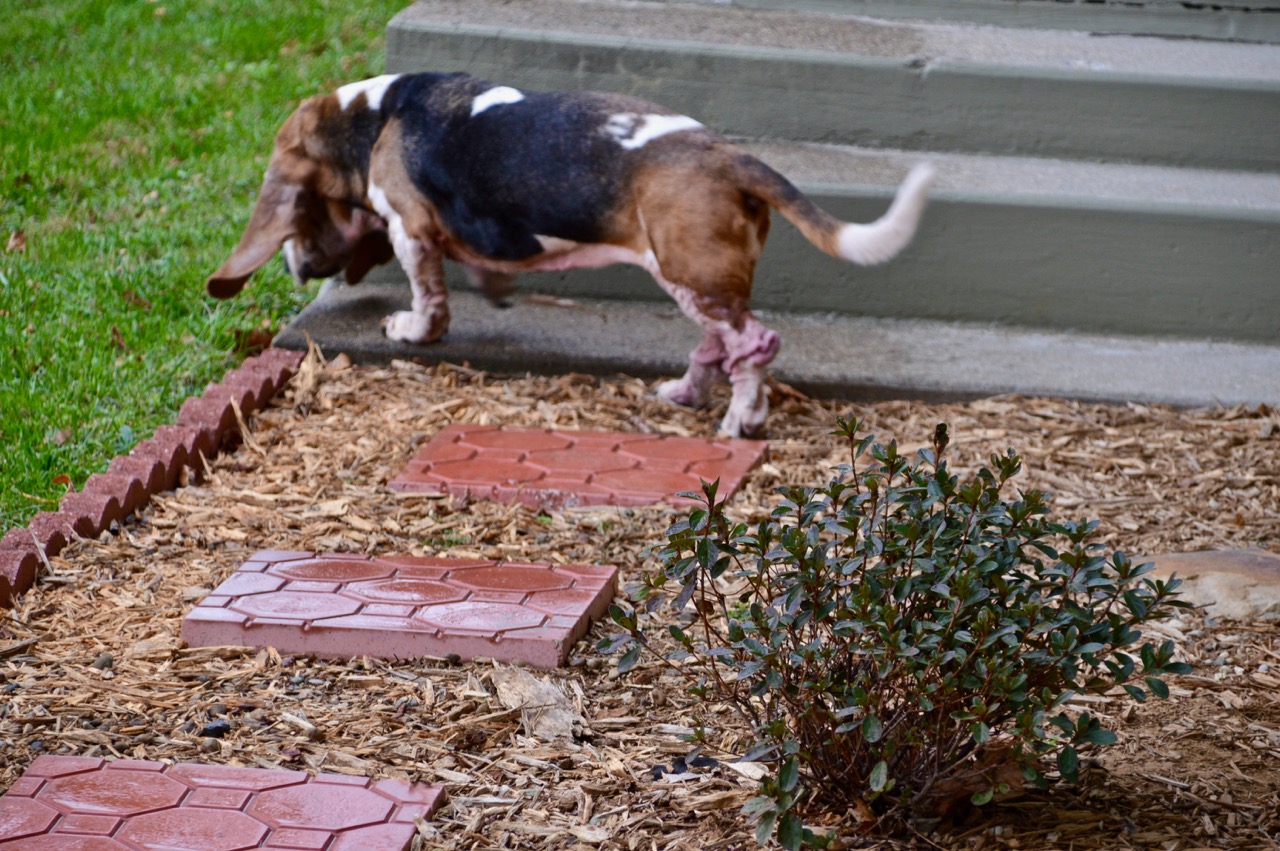 With yesterday afternoon having light rain off and on, we didn't do much. The hounds slept, I played Mahjong and started a new book. You'd be surprised how much faster a day like that goes compared to the days I worked. The hounds and I were in for a shock this morning and it was coming from the Northwest. 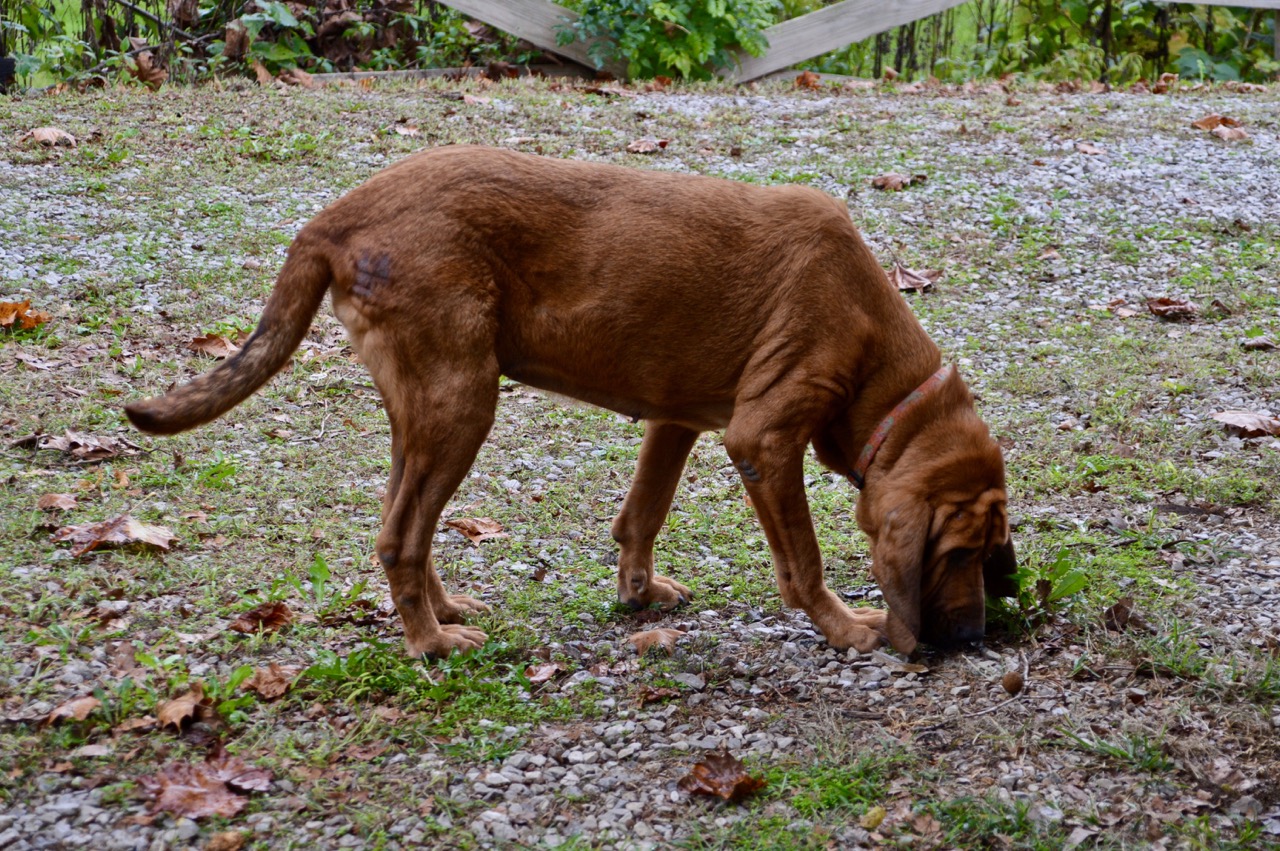 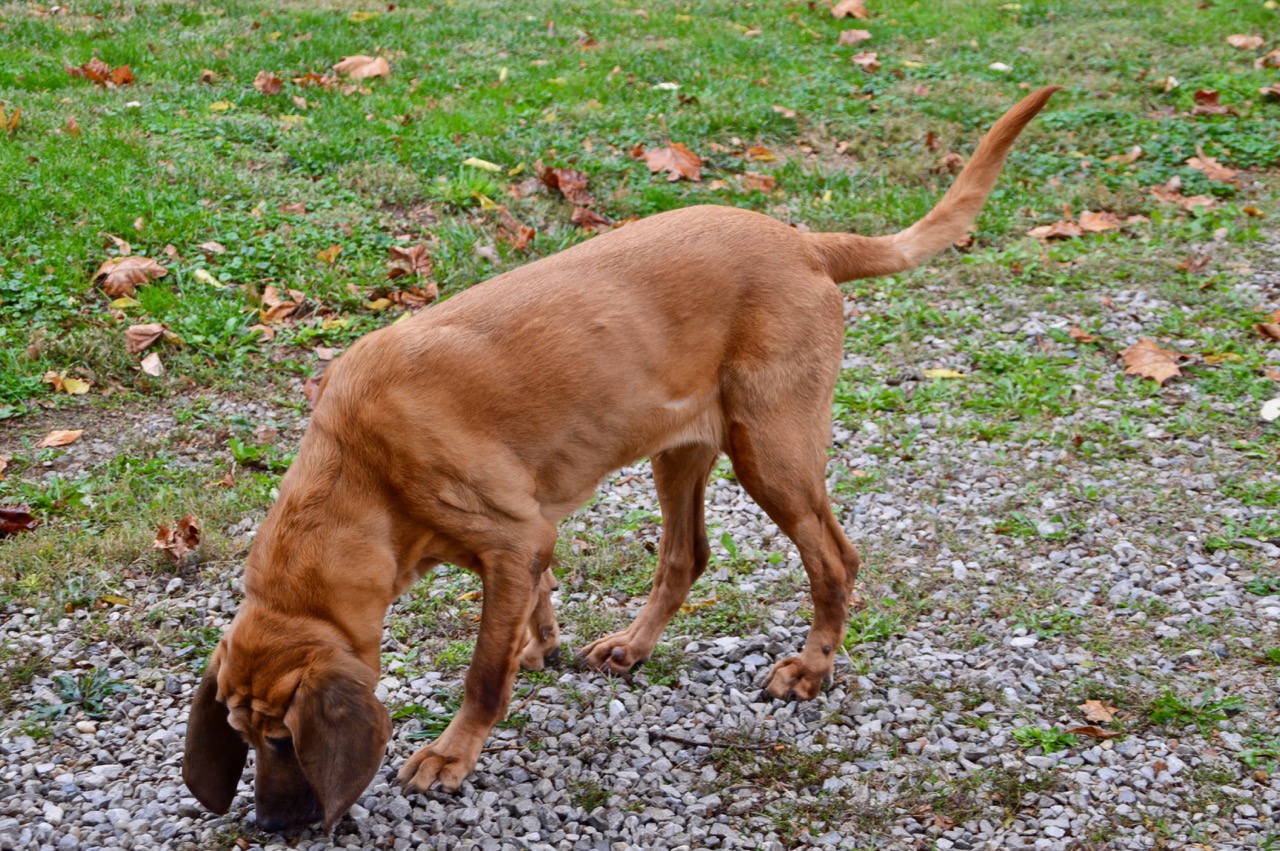 I could see by the way the hounds were sleeping last night, it was getting quite cold outside. How do they know that? Their sleeping positions change from being stretched out in the summer to curled in tight balls during the winter. Heidi is the only one that demands a blanket. 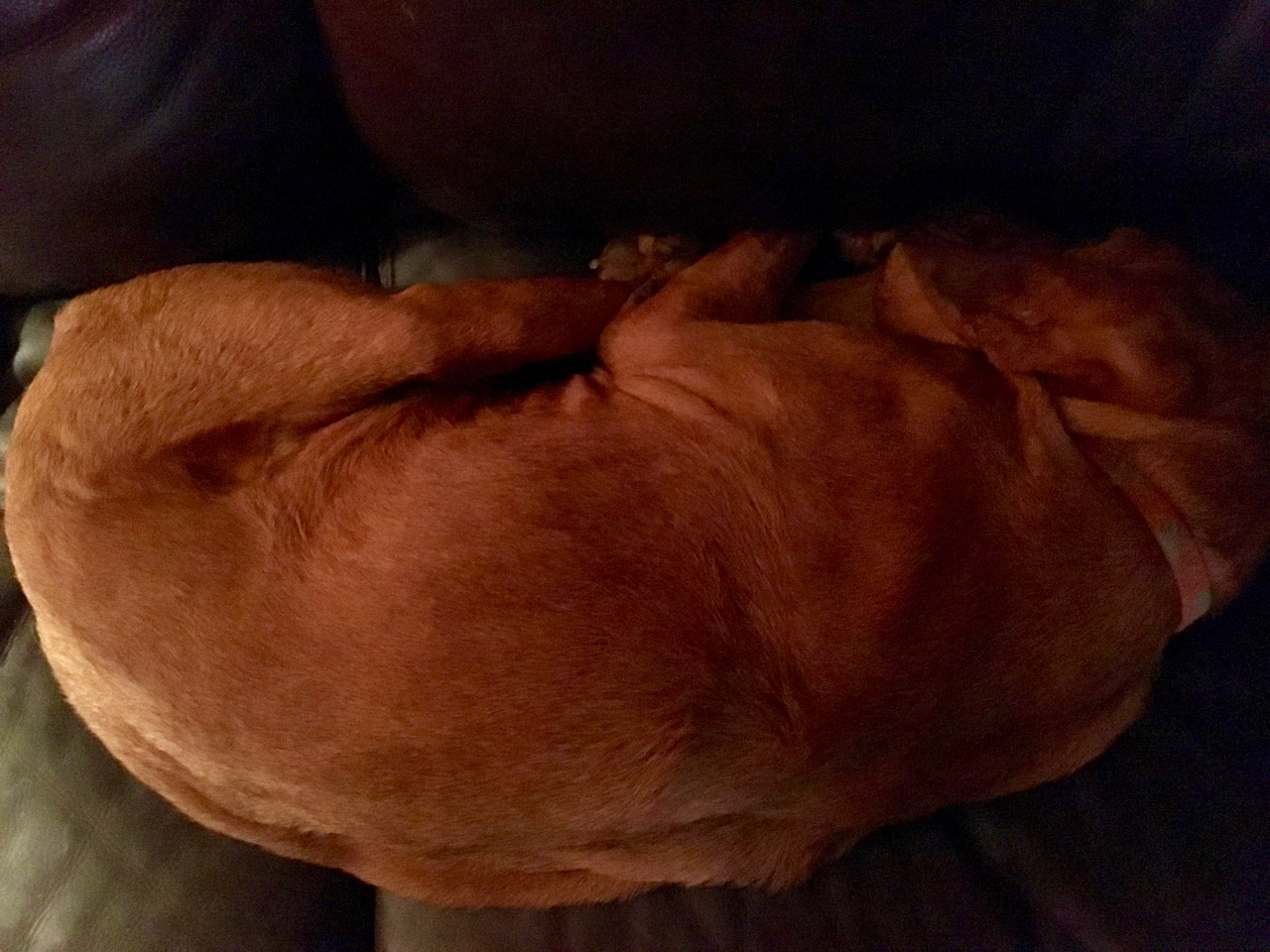 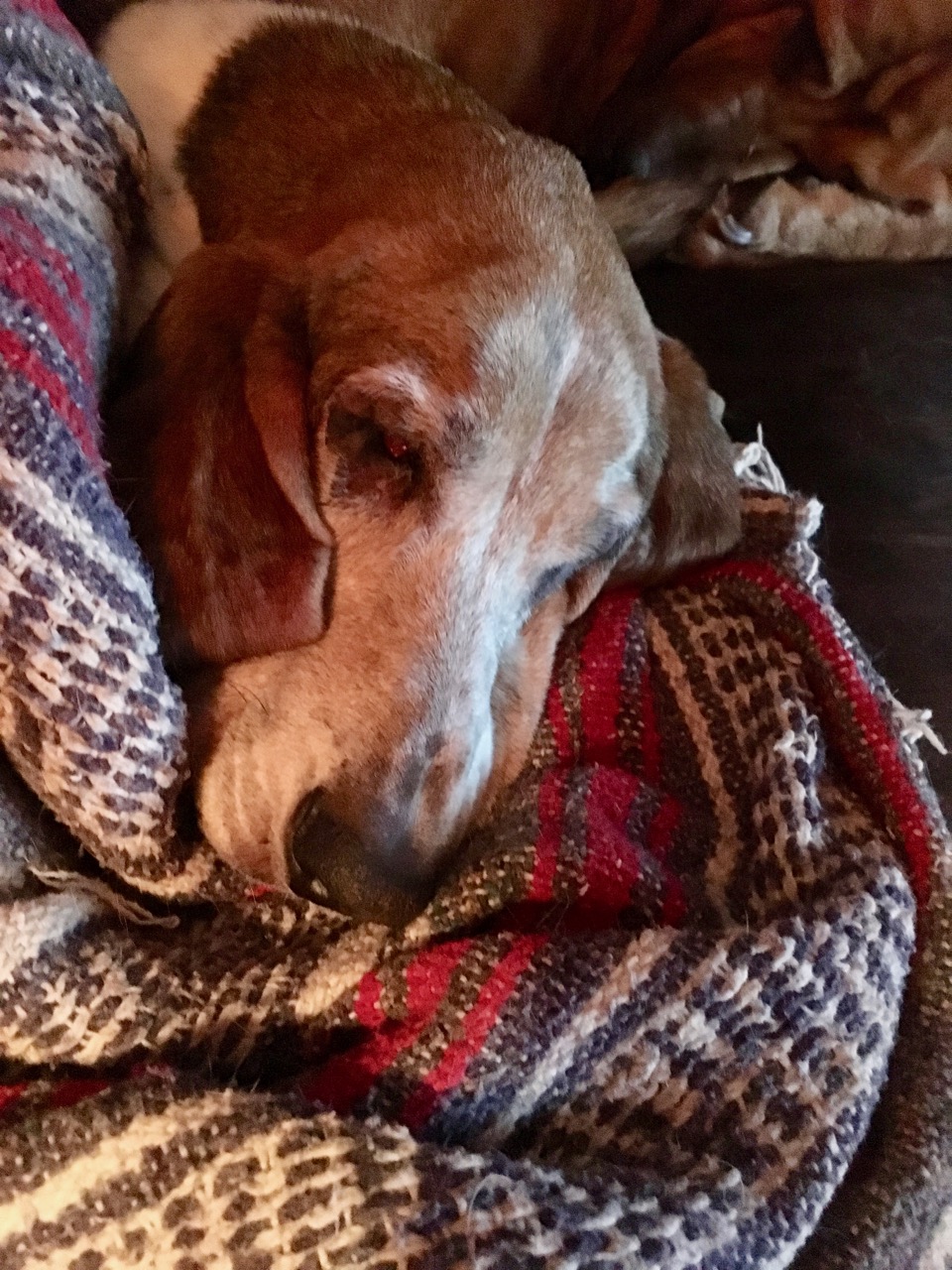 So when we glanced at Intellicast weather radar this morning, I saw that 'light blue' of snow had moved across the northern part of the state 150-200 miles north of us. We dressed accordingly and started our first walk of the day a little past 10am. 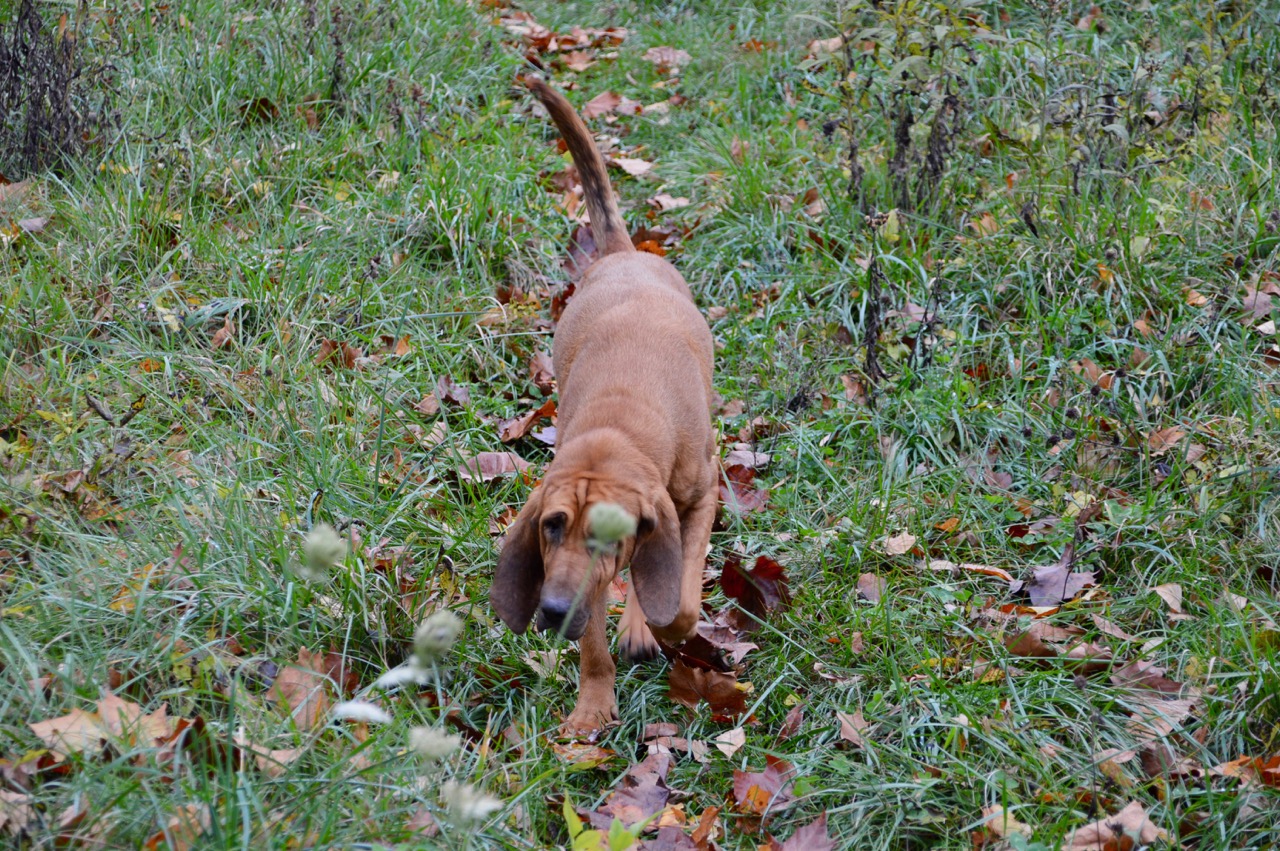 For some strange reason it felt warm, no wind as we started. In fact it felt too warm for the light gloves I was wearing. With Sadie taking off on her own and Stella veering off on her own to the left of me ... I continued to walk under skies that looked like snow was on the way. (not in the forecast) 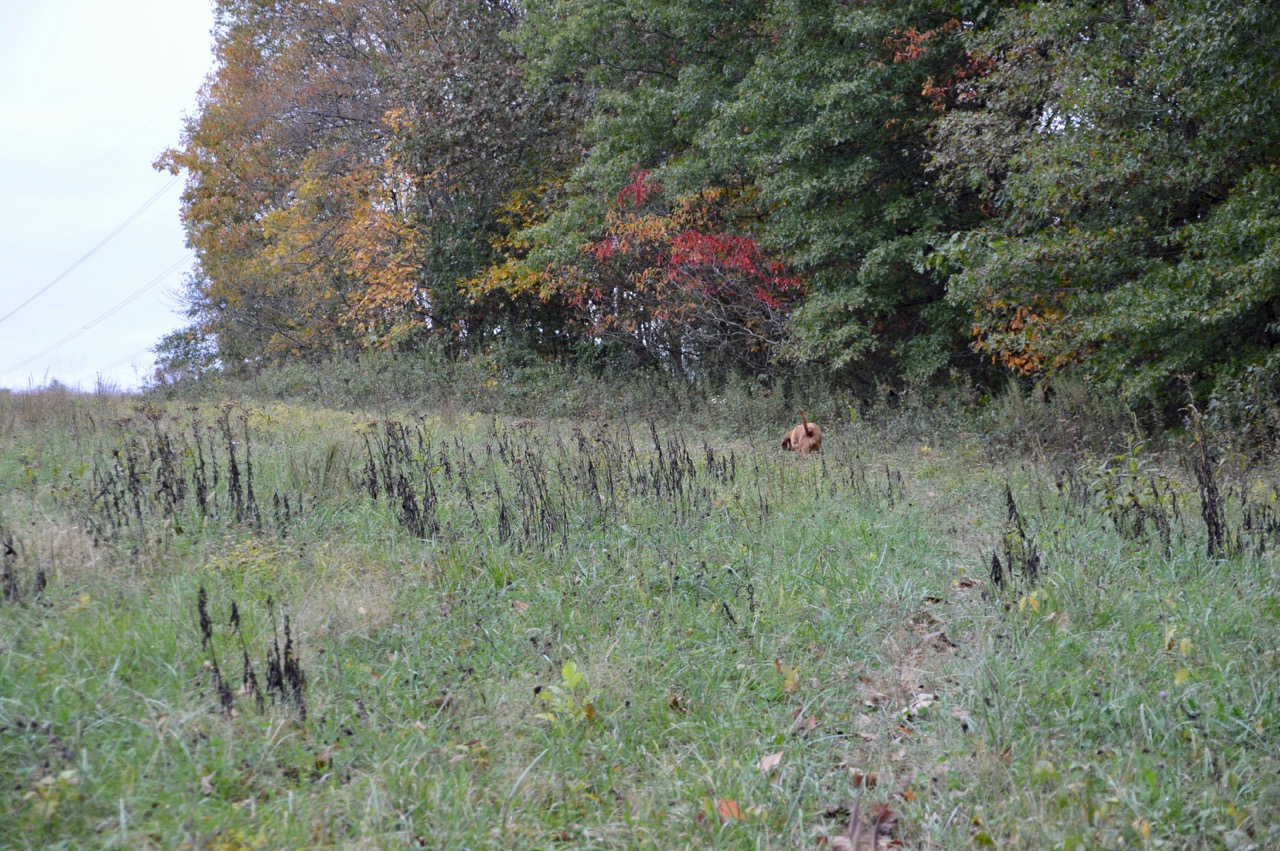 I decided while putting my coat and hiking boots on that Stella would have free reign this morning. She took a path that was totally unexpected ... she followed Sadie and I for most of the time. 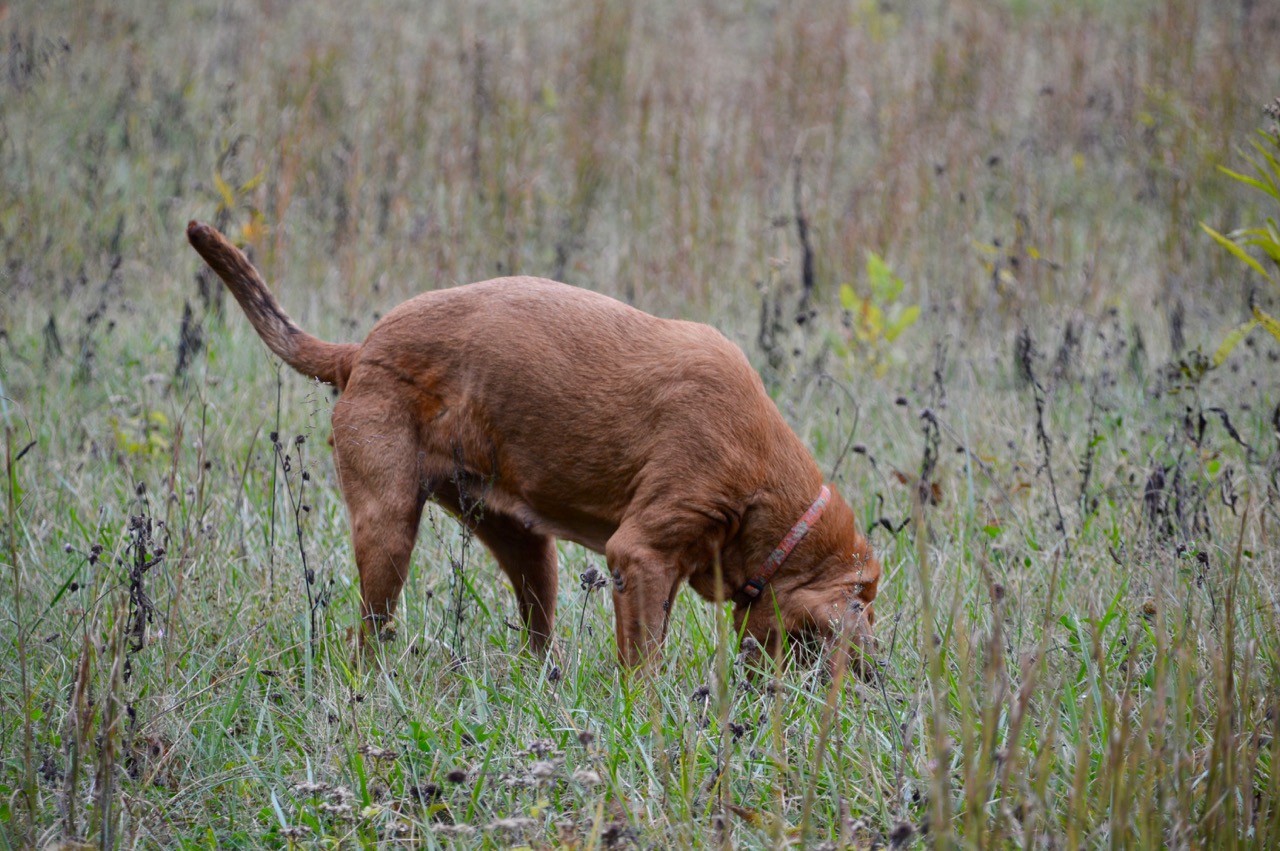 I could tell by their nose activity this morning, there was a lot of deer traffic while we slept. Both hounds stopped at numerous places to smell and identify what was in the area. 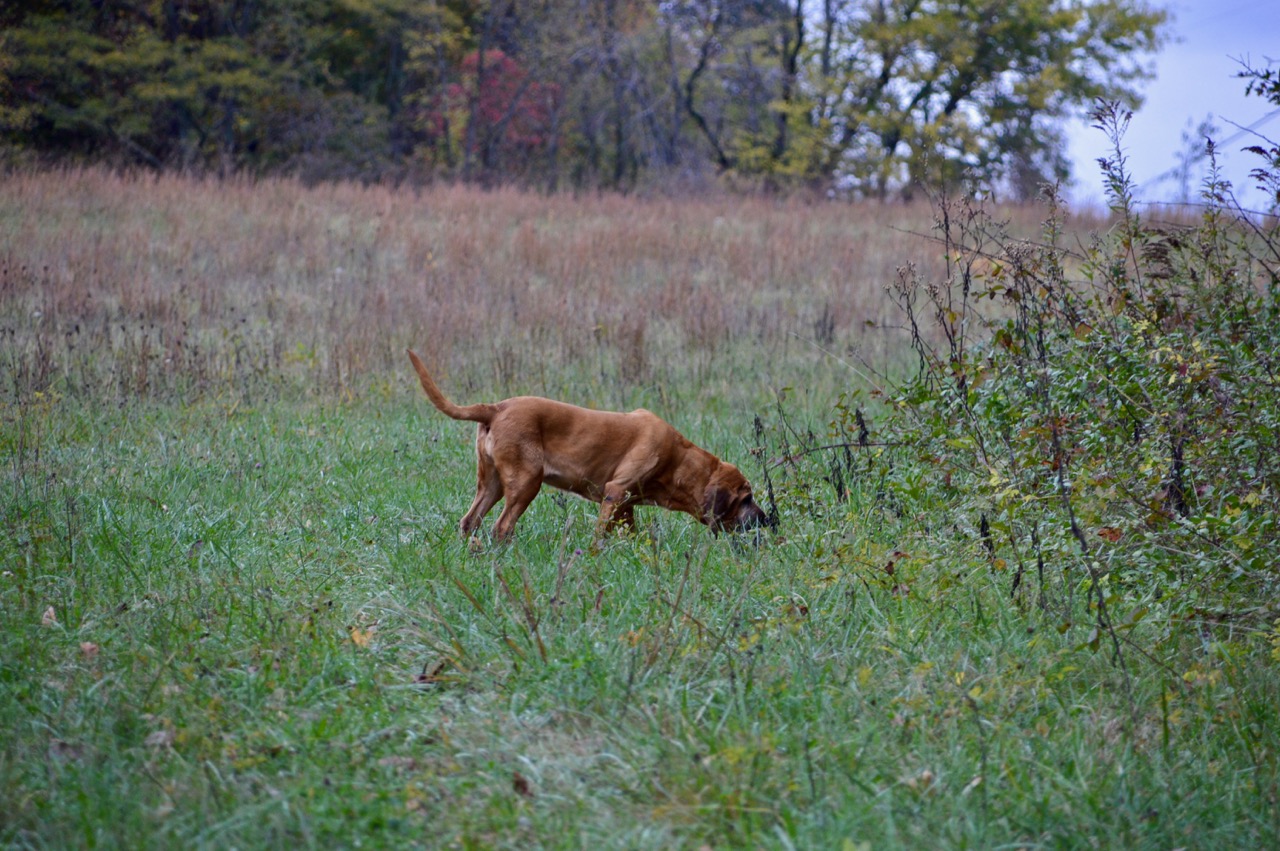 It was about right here that I felt just how cold it was. Even though the cold freezing winds were coming from the NW or left side of picture ... I had not felt anything until I got to the first turn. Had the neighbor's woods blocked the wind? 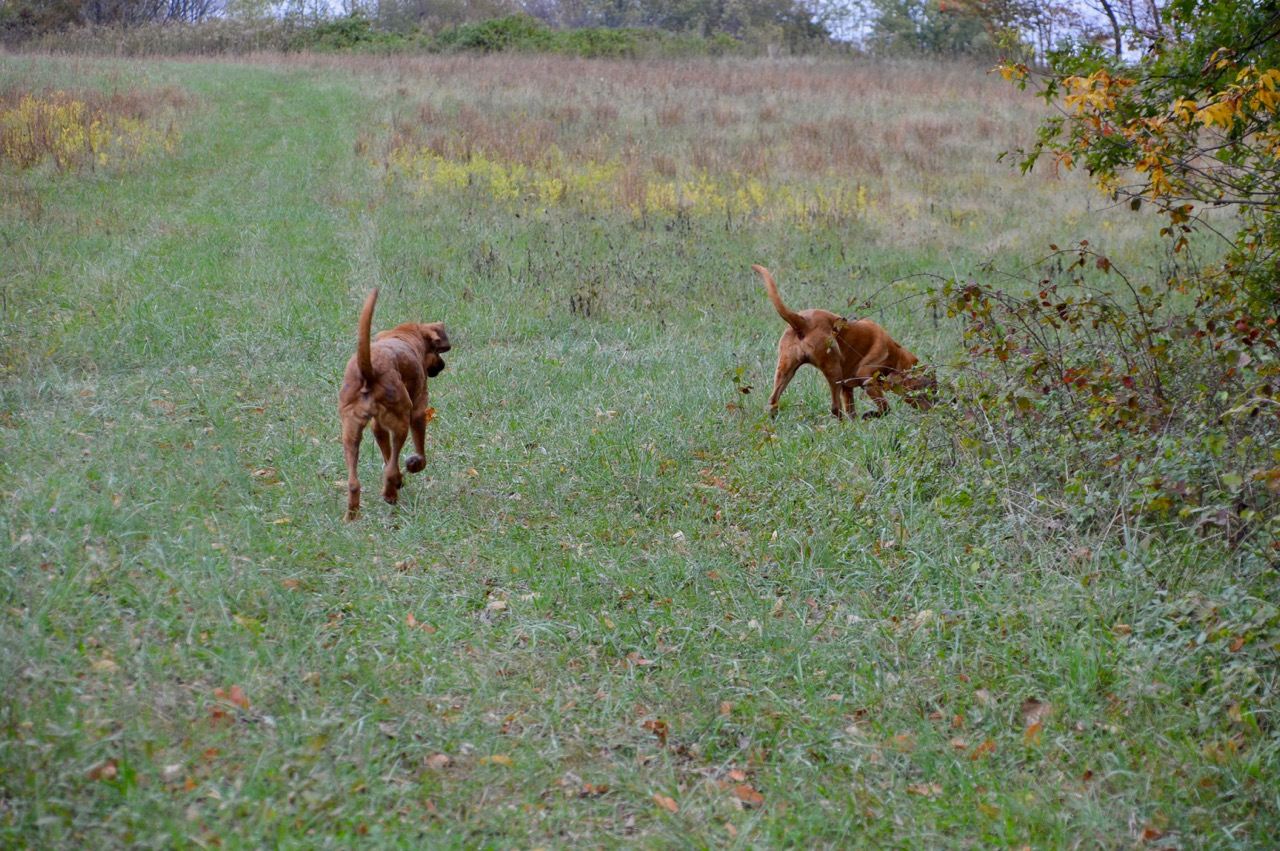 The wind a was mid-January freezing type wind. Wasn't it just a couple of weeks ago I was making this same walk at the same time of day in cargo shorts and a t-shirt??? How many days until Spring?? 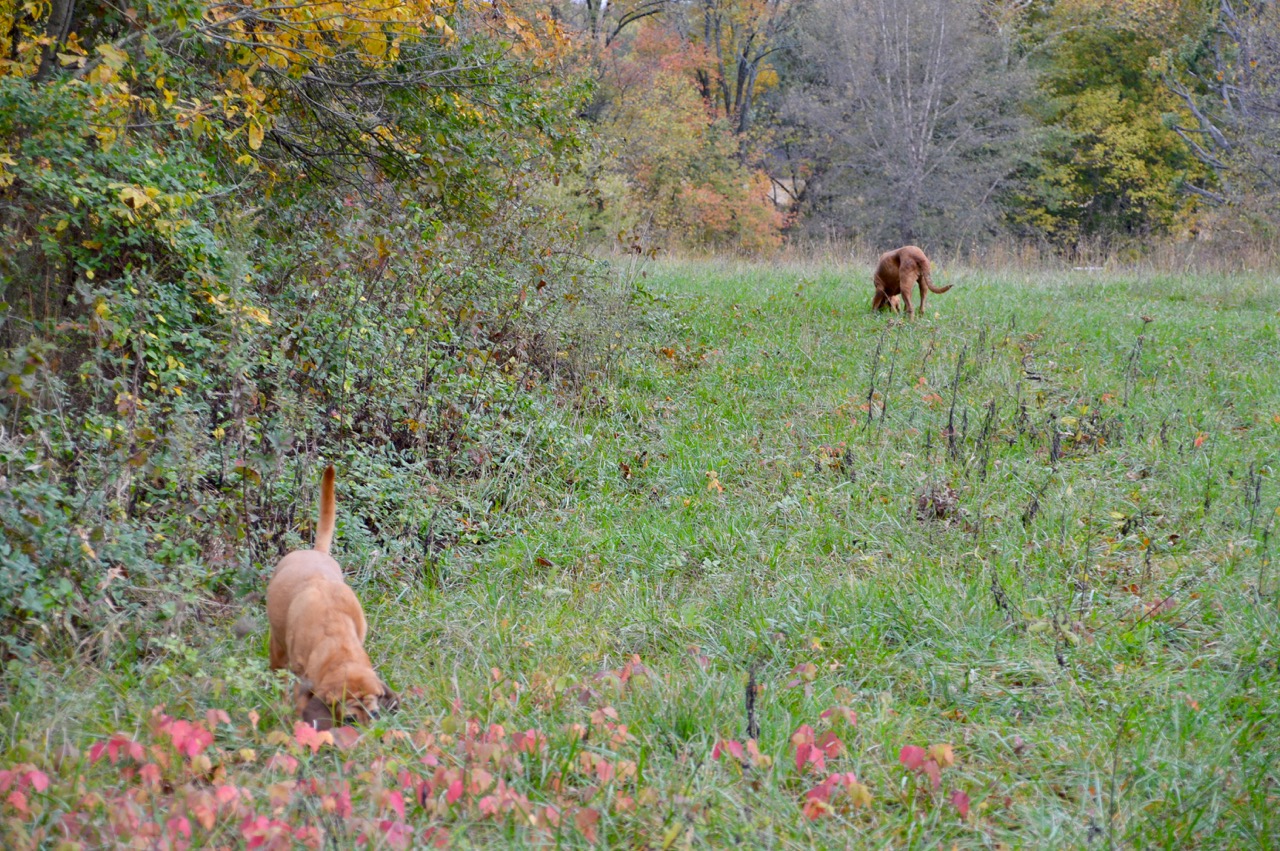 Sadie charges past me at a high rate of speed ... she loves this field. I've been letting her out on her own in the afternoons for close to an hour. She can explore and roam as she wishes. I do check on her by looking through my binoculars just to make sure she is within view behind the house and not in the field to the north of our house. (too close to the highway) 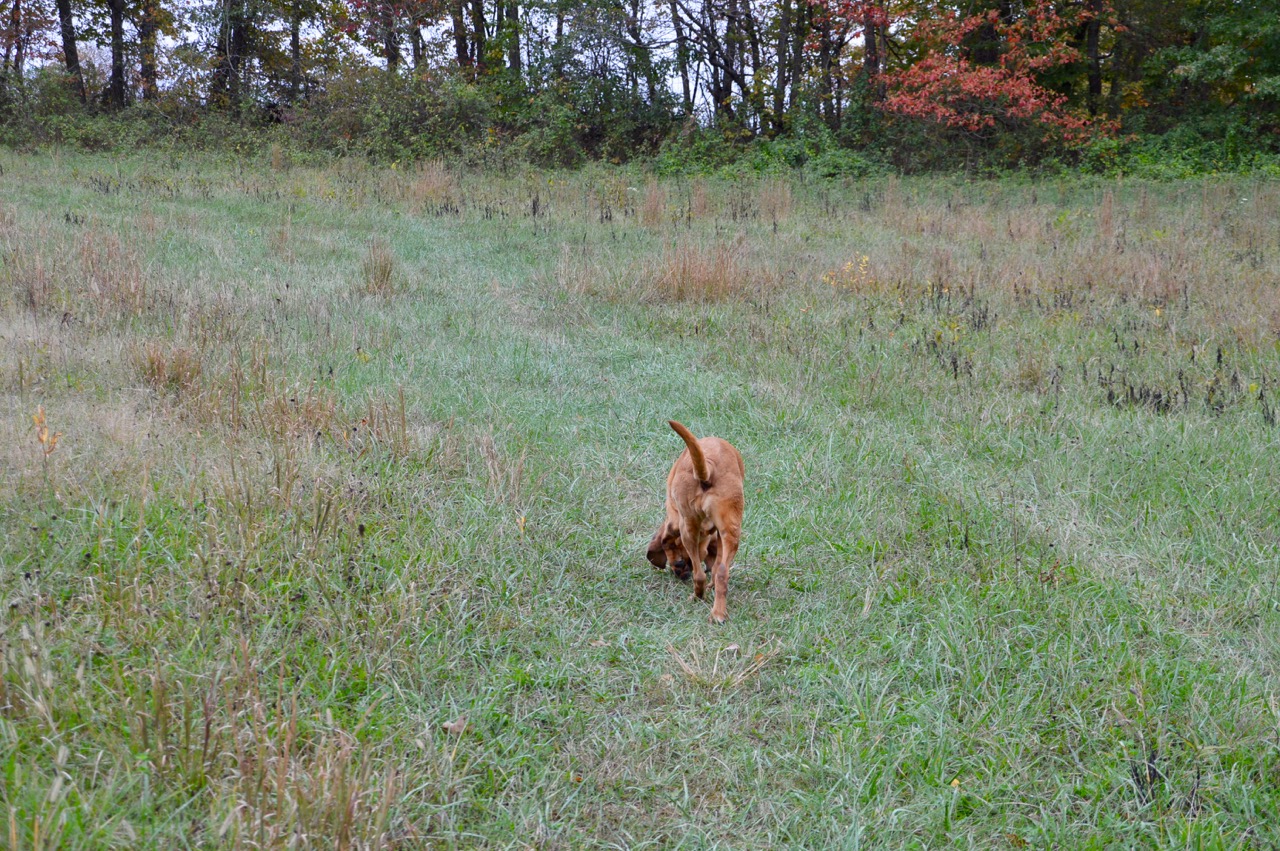 She never cares if Stella is with her not ... she will explore the field in detail. 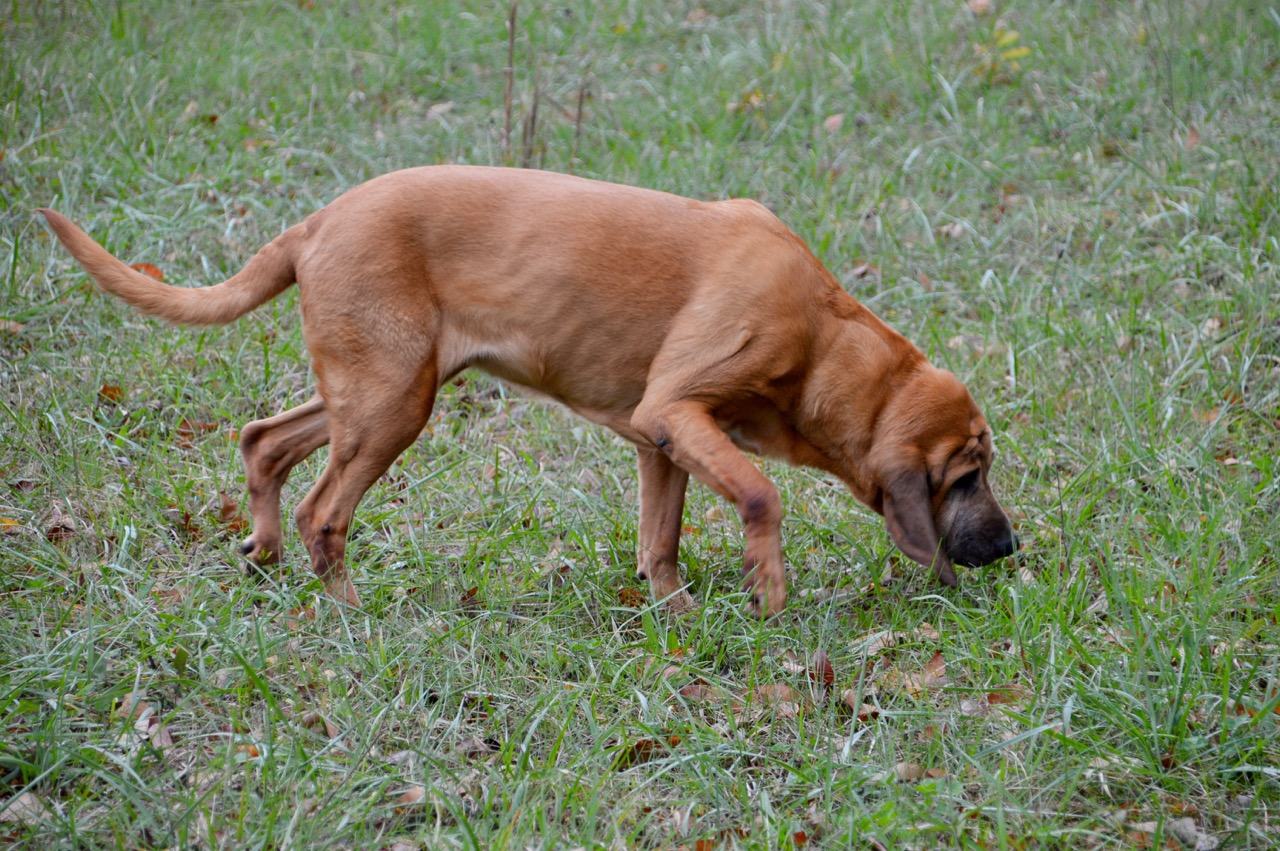 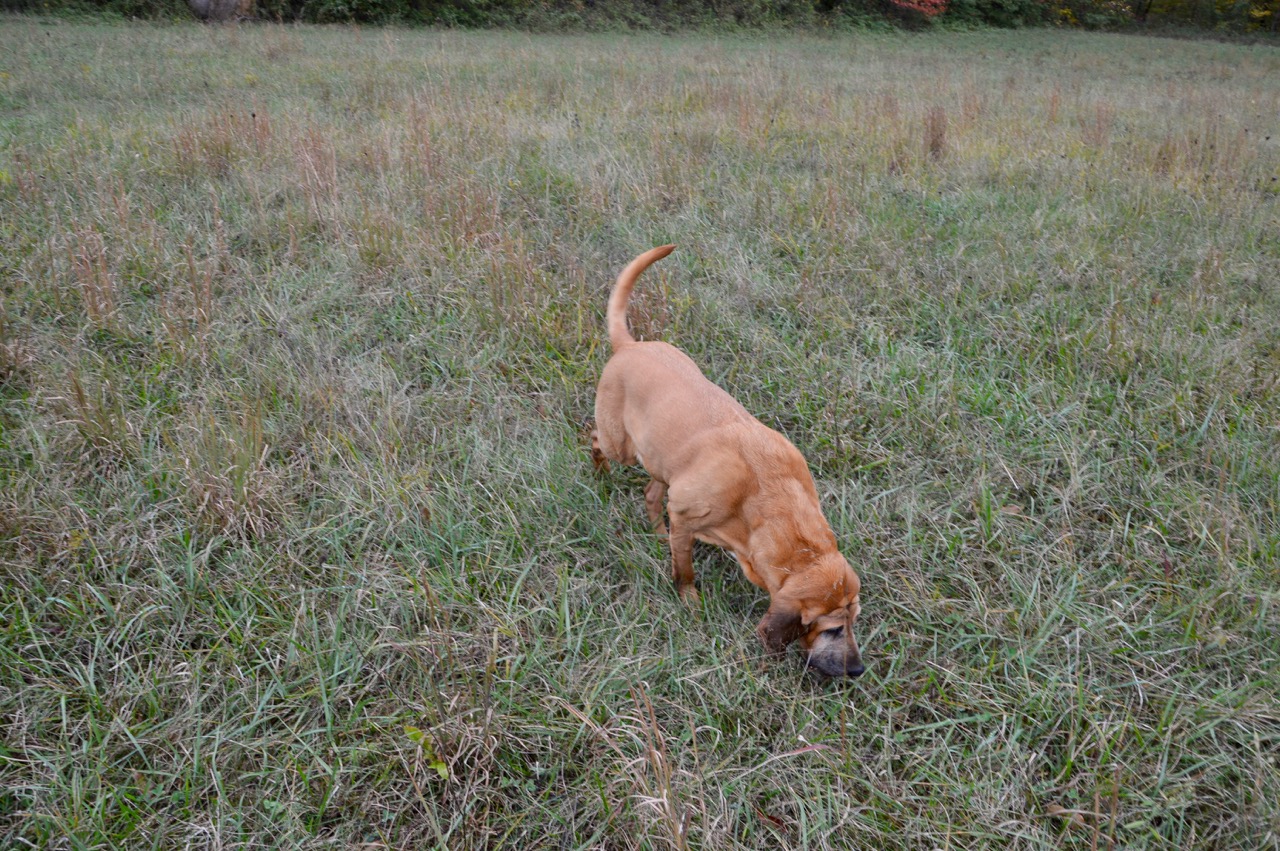 Just as I made the final turn home, I could barely see Stella walking across the field heading north while we were going in a southwest direction. I just assumed I'd find her over by the neighbor's woods and kept walking.

Out of nowhere, Sadie bolted in front of me and started running to the right of me while I was looking for Stella up ahead of me. There were no birds launching from ground level. I didn't see any deer. What made her do that? 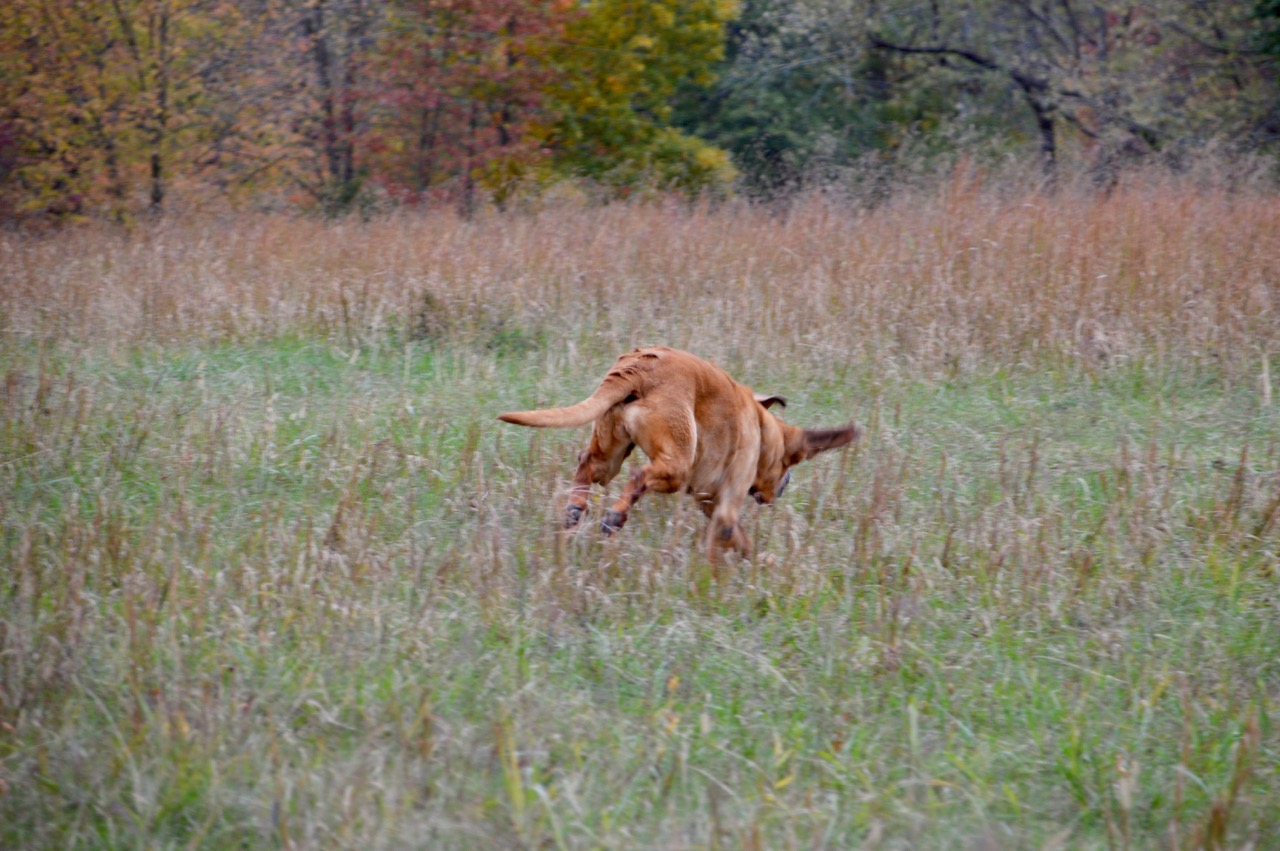 It wasn't until my camera lens focused on Sadie that I saw Stella. She was not up ahead of me by the woods but way off to the right side of me past the main "ATV Racetrack" ... I cannot remember a time she had been in that part of the field ... except the deer chase she was on last year. 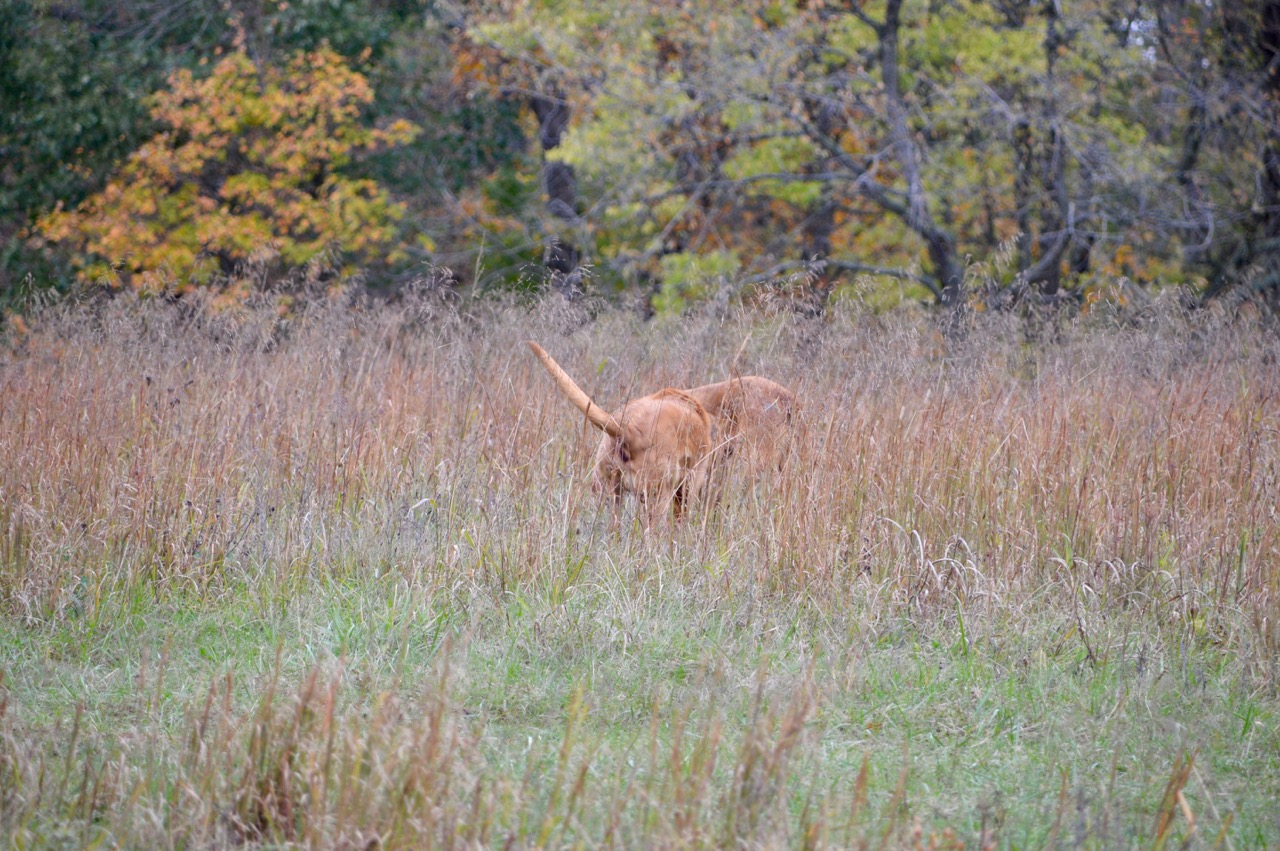 Of course neither one was going to leave that spot with me just calling their names. I walked all the way over to them and about the time I reached them ... they both headed back toward our path without me saying a word. 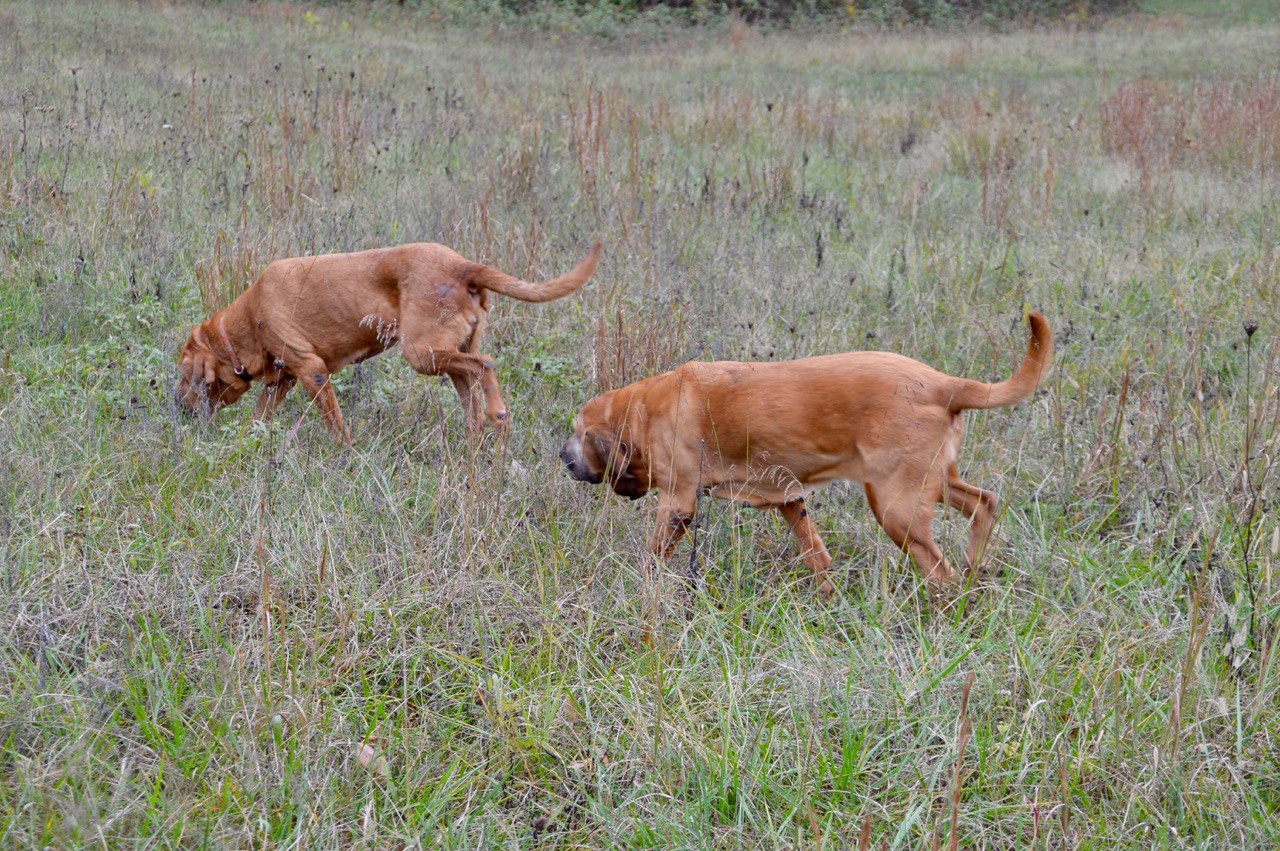 We took the normal path home all because Stella had decided that was the way we should go today. She likes to make her own decisions. I was not quite to the yard when I turned to see where the hounds were, possibly getting a picture of both of them from the front of them instead of the back or side of them.

Here is Sadie rolling in something but was fast enough the camera didn't catch the full roll. She jumped back up and looked at me to see if there was a chance of another roll ... luckily I saw nothing nor smelled anything that she might have rolled in. She ran up to me very proud after her gymnastics exercise and let me know she did not stink nor was there anything to wash off her soft coat. 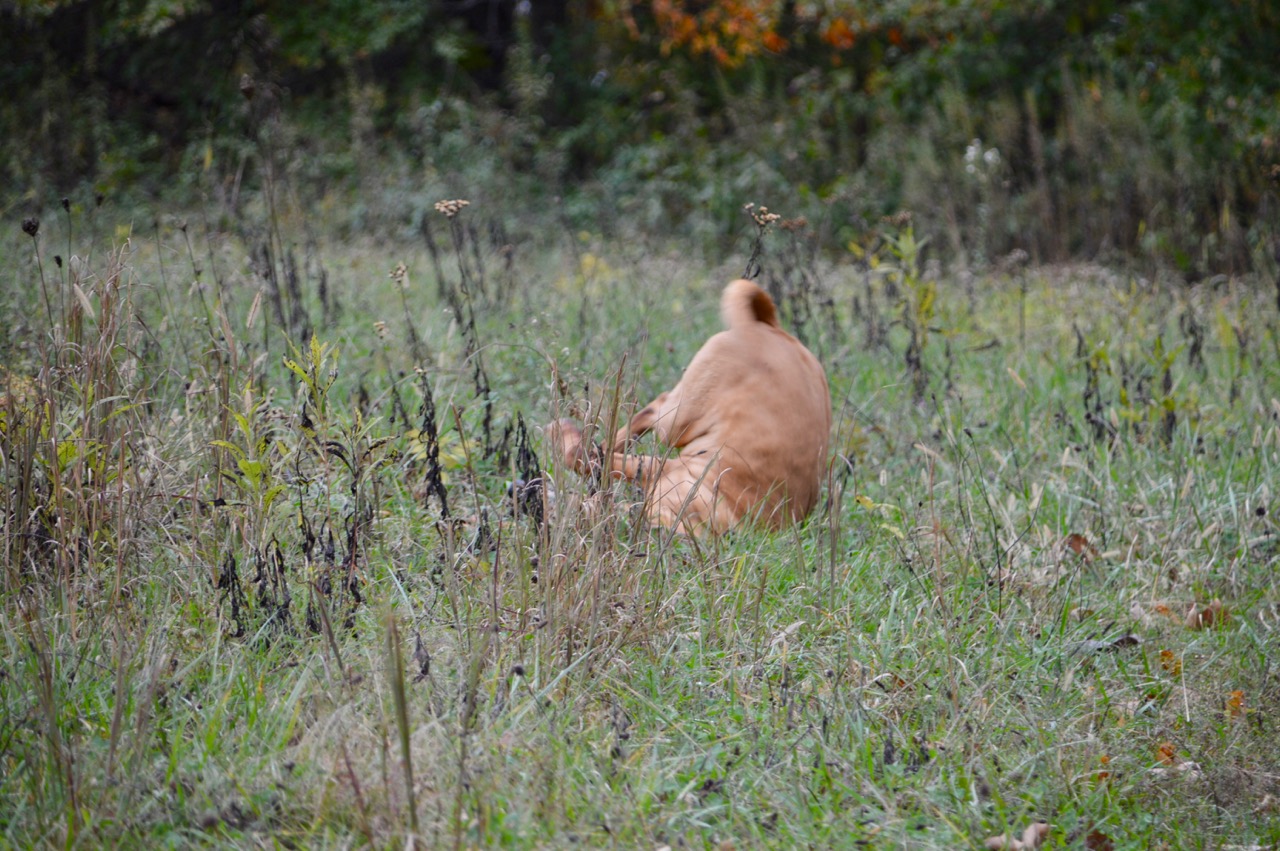 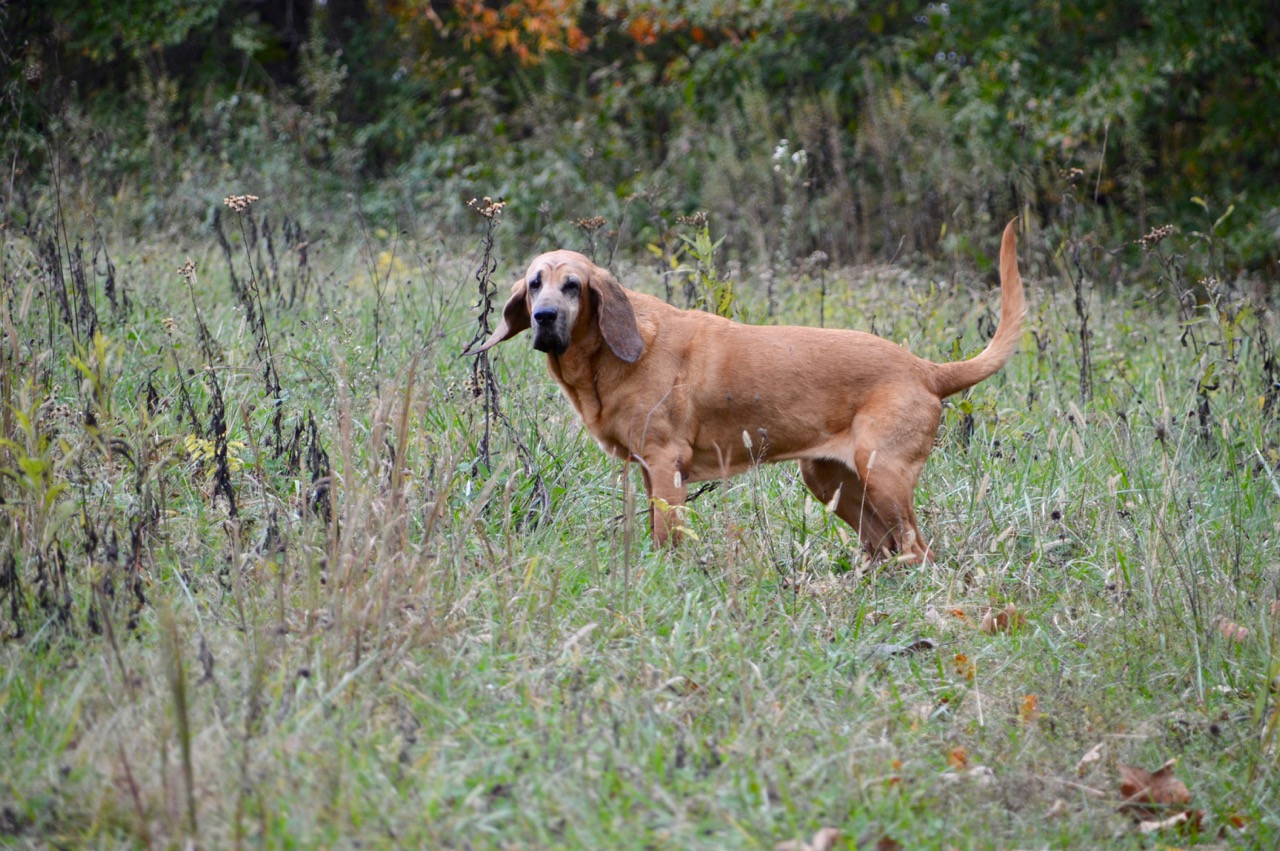 So another successful Saturday morning walk ... freezing temps ... and a full day of college football along with another World Series game tonight. Luckily a lot of the sports channels will replay some of these games this week so I will not need to tape them while watching another game.

Here is a 'highlight' from this past week. I took this with my iPhone camera and forgot I had the 'live' setting turned on. I don't know if that feature will show up on the blog but from my computer I could not only see a 3-4 seconds of her but HEARD her licking the bottom of the ice cream container. 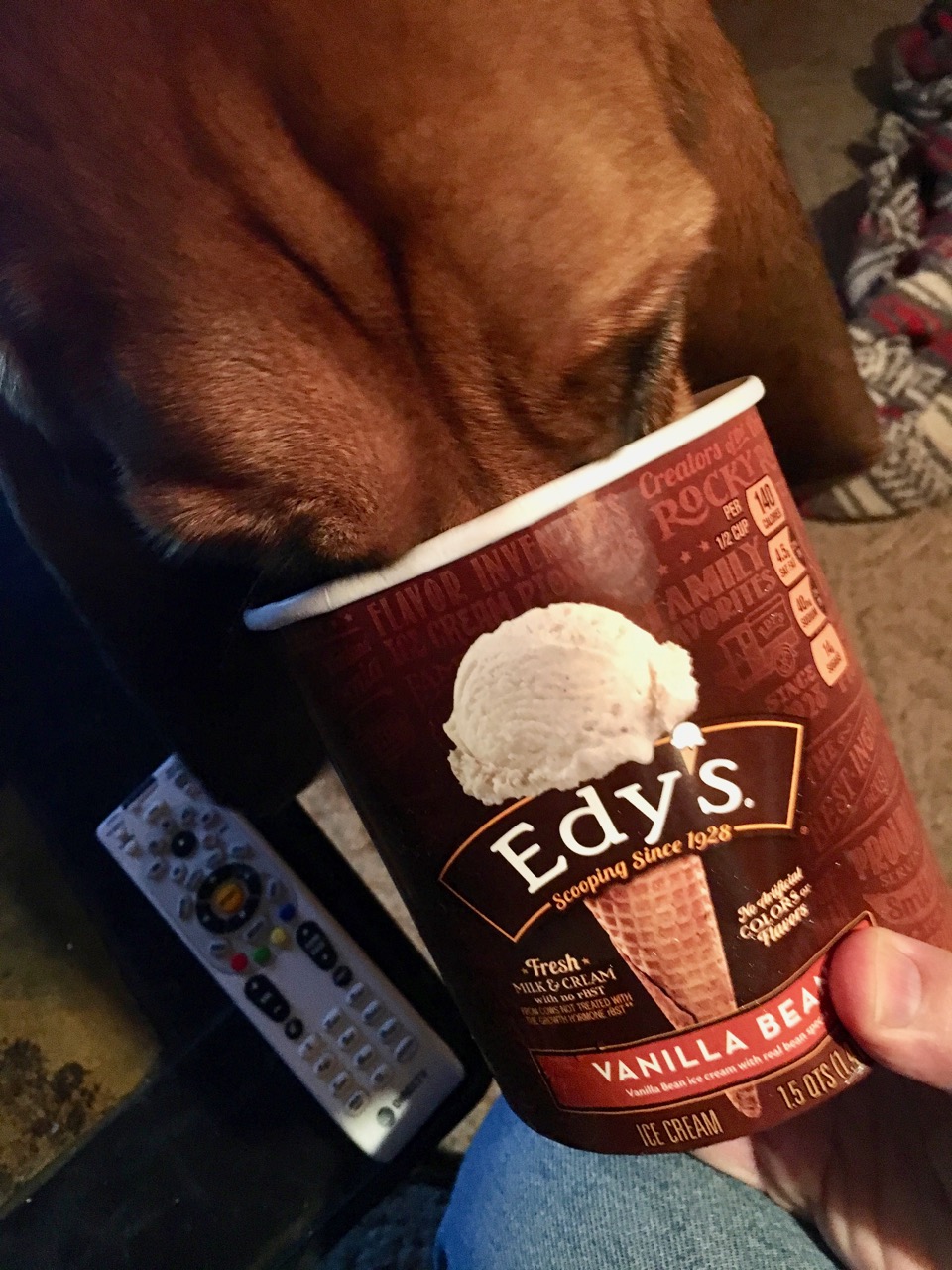 Sometimes when you can't get to that last drop of ice cream, you just have to dig a little deeper. 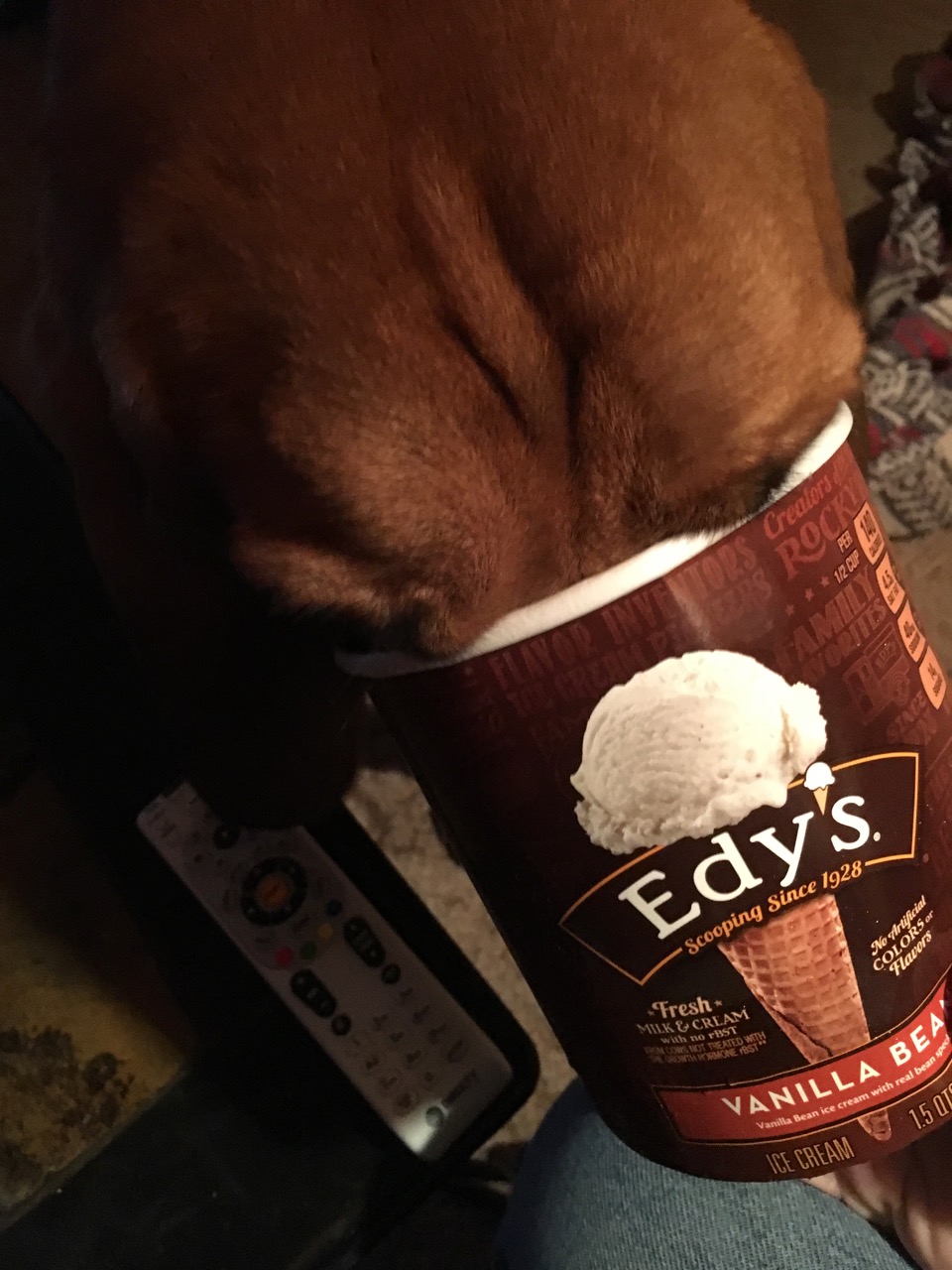 I have a cluster of good games on at 3:30pm and maybe a clear schedule for the MLB game at 7:30pm before my late night Pac12 games that start at 10:45pm. It's a typical Saturday for a 'sports addict'.

Firefox took a call third strike for me this morning and has  been put back on the self in my apps folder. Their icon is no longer on my 'dock'. It's a consistent problem I've had with them over the years and one of the reasons I always stop using them.

So I have made the full circle this morning and have gone back to Google Chrome.
I have an insurance appraiser coming to my house next week to tell me what it will cost to fix the Z4 grill and shields underneath the car. I have a good body shop a mile away from me, one that I know does good work. Of course the insurance company tells me they recommend body shop that is 30 miles from me which will guarantee their work plus they will pay to tow the car.
I have priced out what I think needs replaced with BMW OEM parts and the total cost is not quite what my deductible is. One way or another the Z4 will be fixed but I am interested in what cost the appraiser comes up with.
The way TV is viewed in today's world is changing rapidly. I will not list all the companies that you and I know are getting into streaming tv shows. That is all good, except when you live in 'the tropics' of Southern Indiana, in a rural area, all of those that offer unlimited data to do this 'streaming' is not available in my area.
I wonder what changes will be made in the next 1-2 years because in the past 3-6 months the number of companies advertising their tv services is increasing rapidly. Like "YouTube TV" ????
That is about all I have for today. I have to wonder if it is just a coincidence that after I posted pictures of my burn pile burning last week, then was reminded about the California Wildfires by someone making a comment on that post ... that my blog traffic dropped around 50% this past week, starting the day after those fire pictures.
Interesting.
Still ... blog traffic does not determine how exciting days are here in 'the tropics' of Southern Indiana.
at October 28, 2017