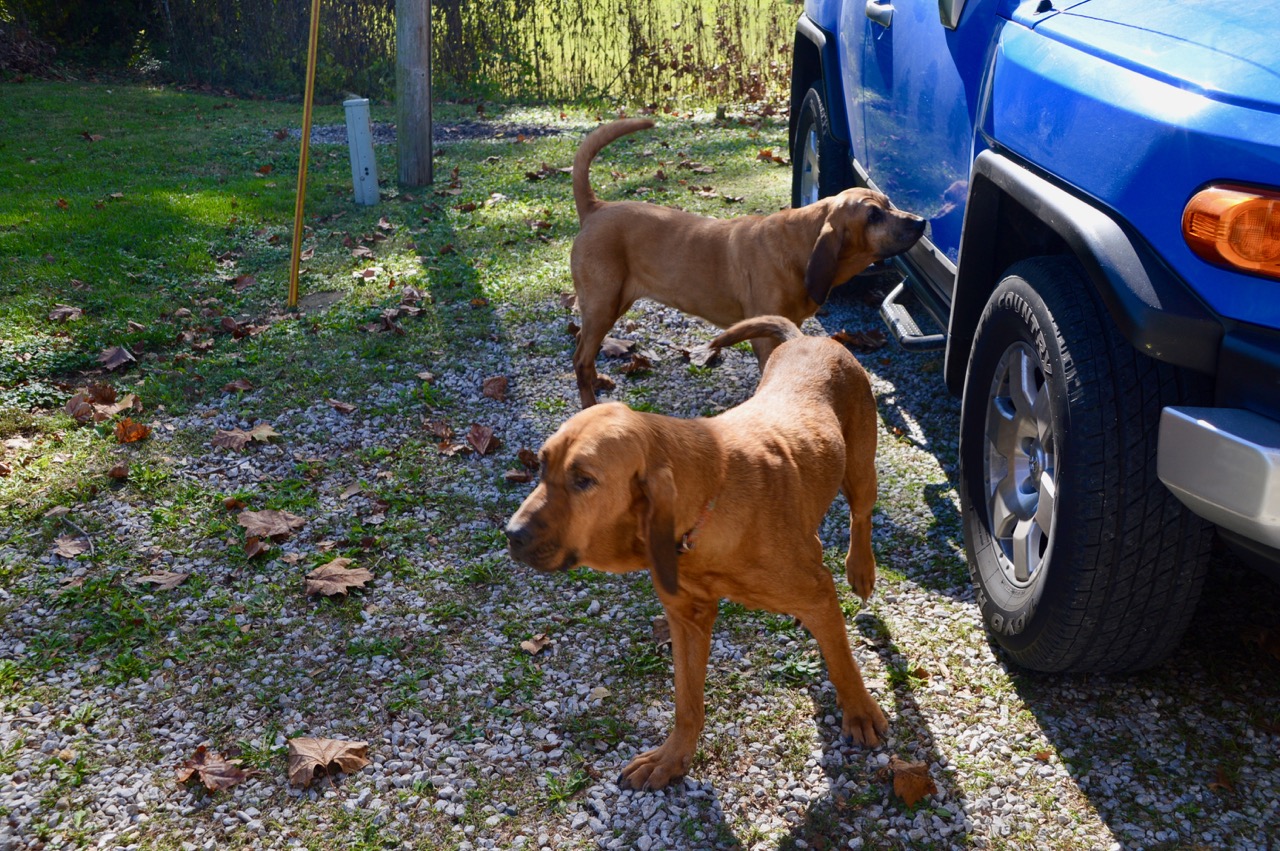 For me to pull the ladder out of the carport shed I need to back out the FJ. The hounds always think they are going for a ride when that happens. Once Sadie and Stella decided we were not going anywhere, Stella headed for the back yard for a nap, Sadie went to the field to roam and Heidi wandered all parts of the yard. I was preparing to go on the roof to walk along the edge and clean out the gutters full with leaves. I finished everything I wanted to do this afternoon except Operation Hound Nails was moved to Saturday morning before the weekly college football marathon.

For some reason Heidi always finds the edge of the bank interesting enough that she will slowly walk the full length with her nose to the ground. With the temps up to 77°, she spent all afternoon outside. 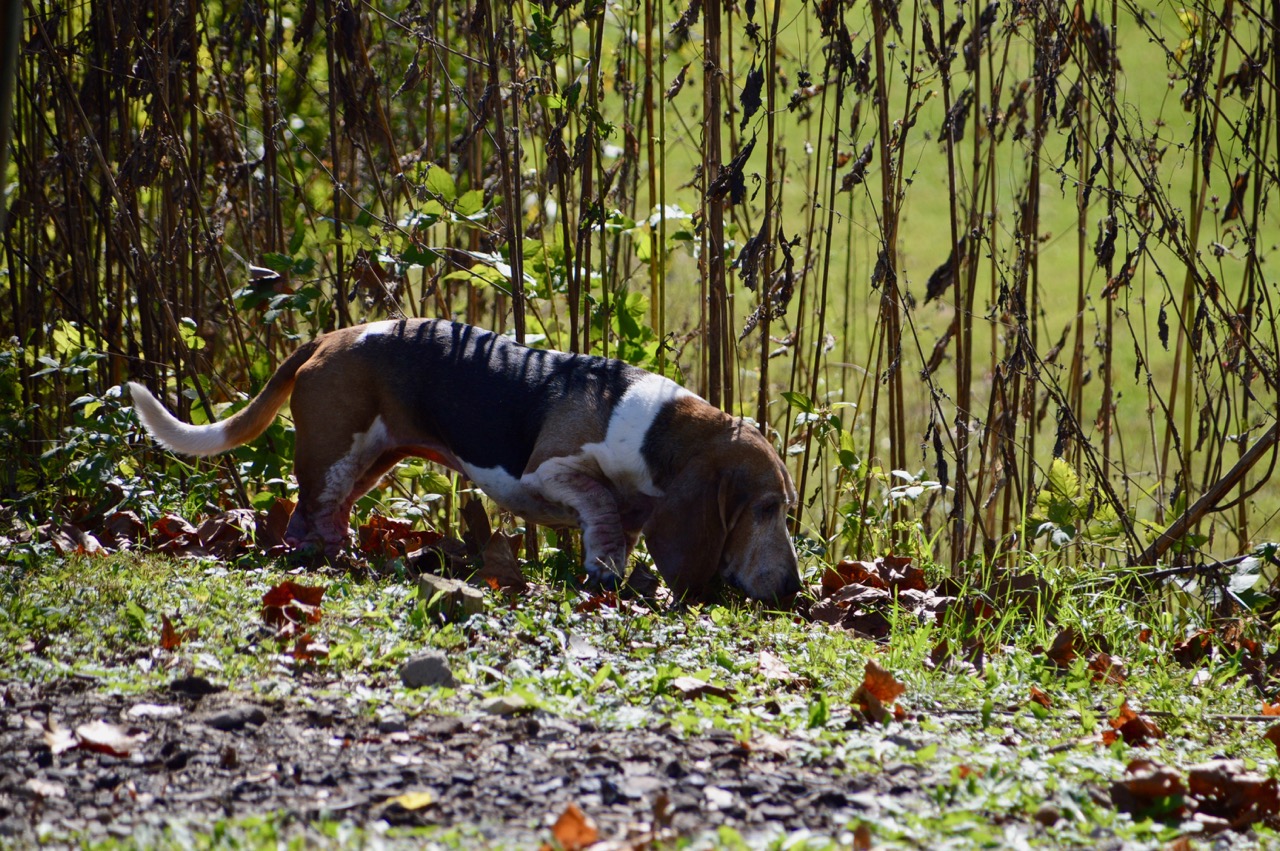 Since I live outside the "city" limits, this burning is legal. The pile was started last fall with tree limbs the had blown down over the winter. In March when I cleared the bank small saplings were added and then added again with large tree limbs and leaves when REMC trimmed the trees around their power lines. I was surprised how dry the pile was after 7 months. A match held to a few leaves and within a minute I had a large flame. 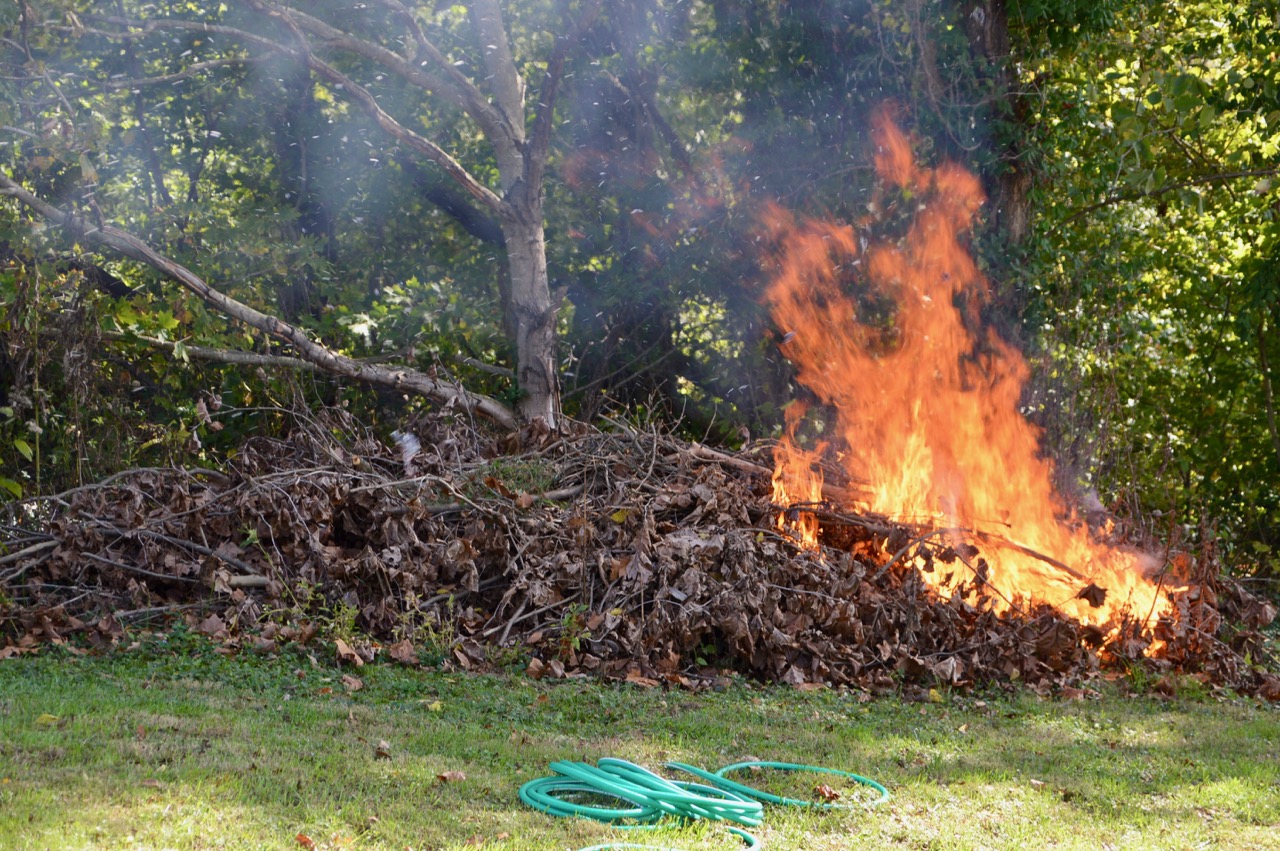 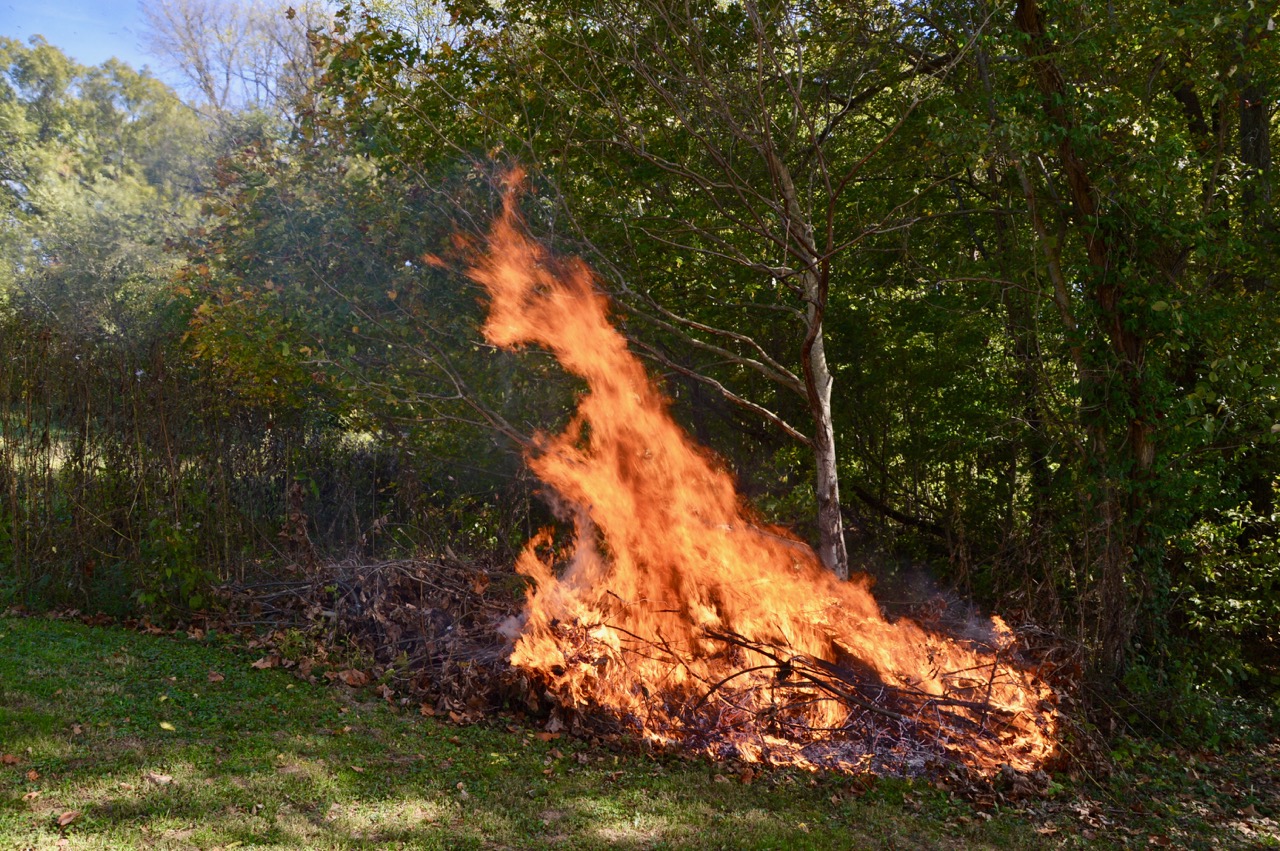 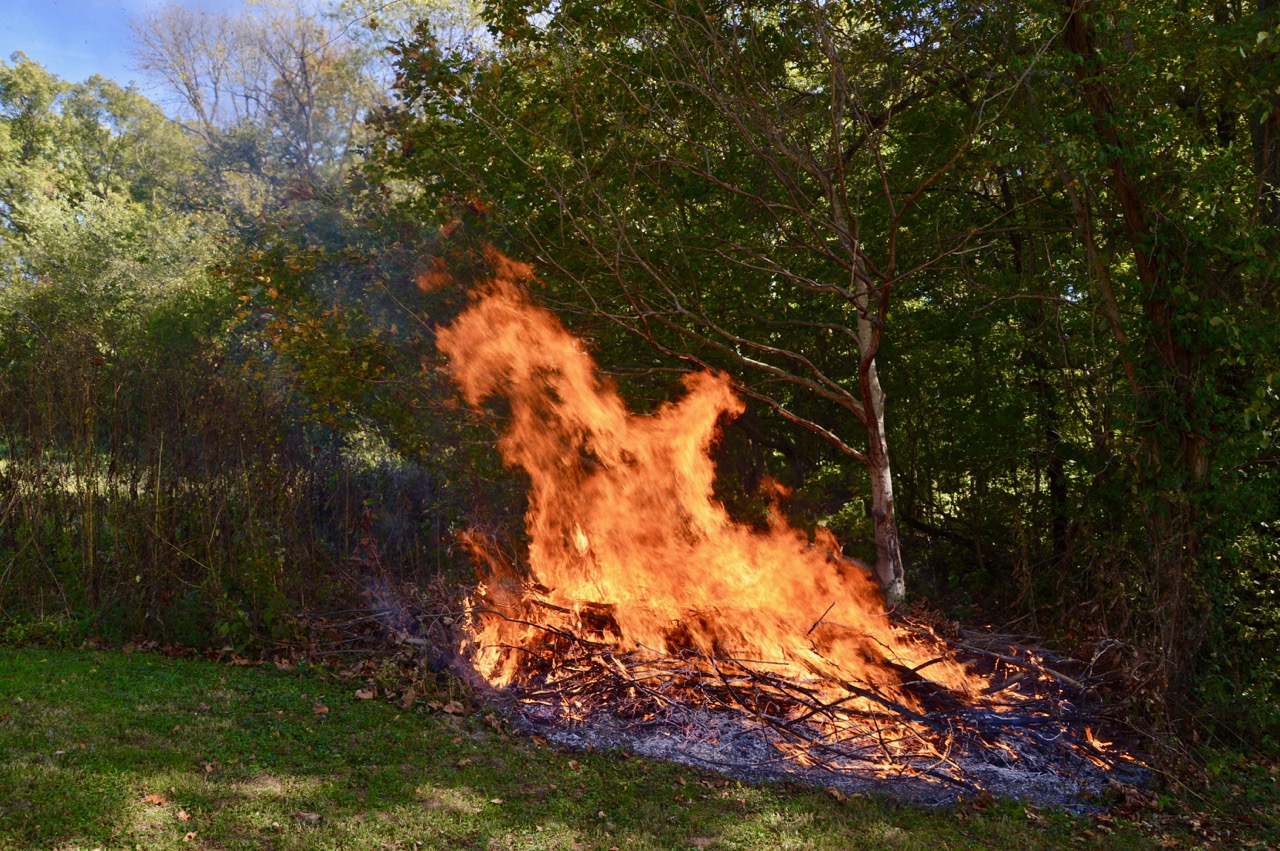 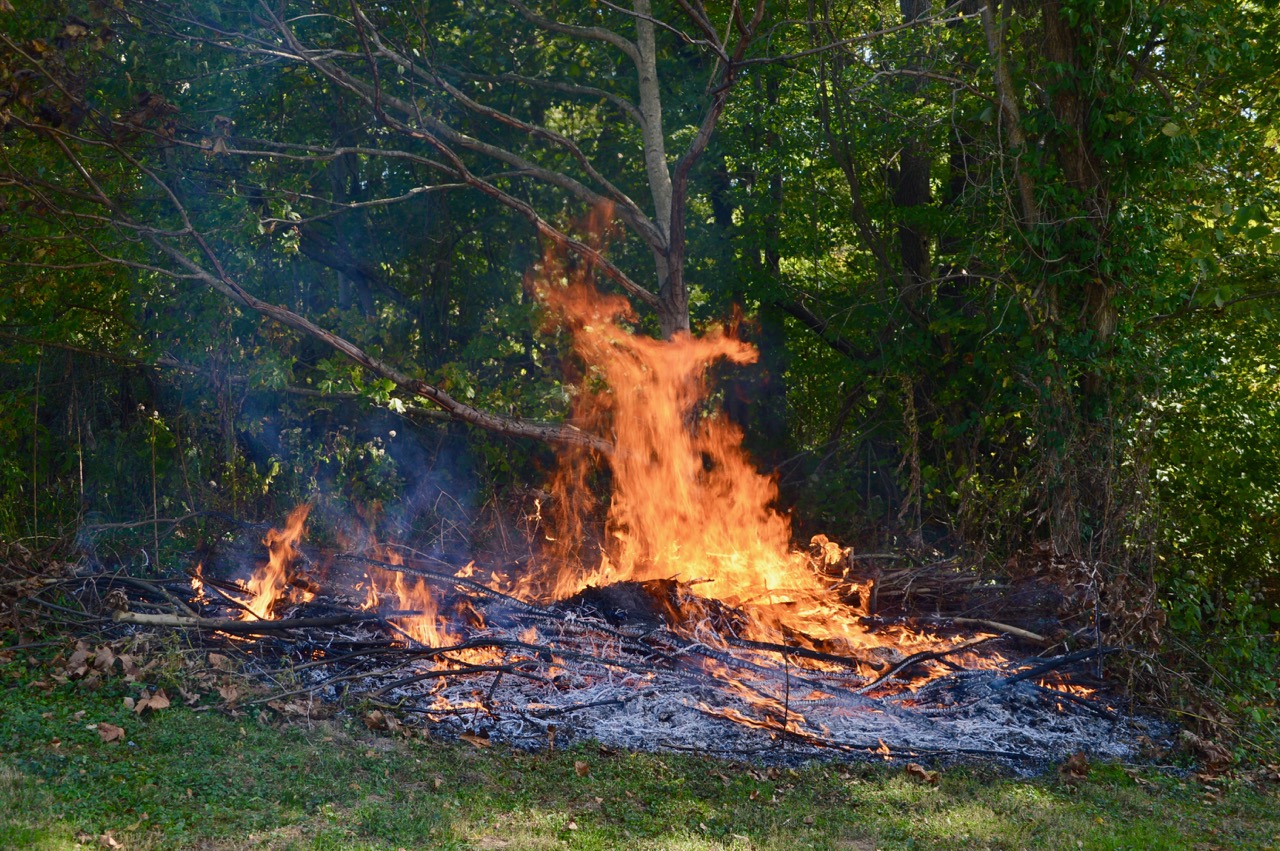 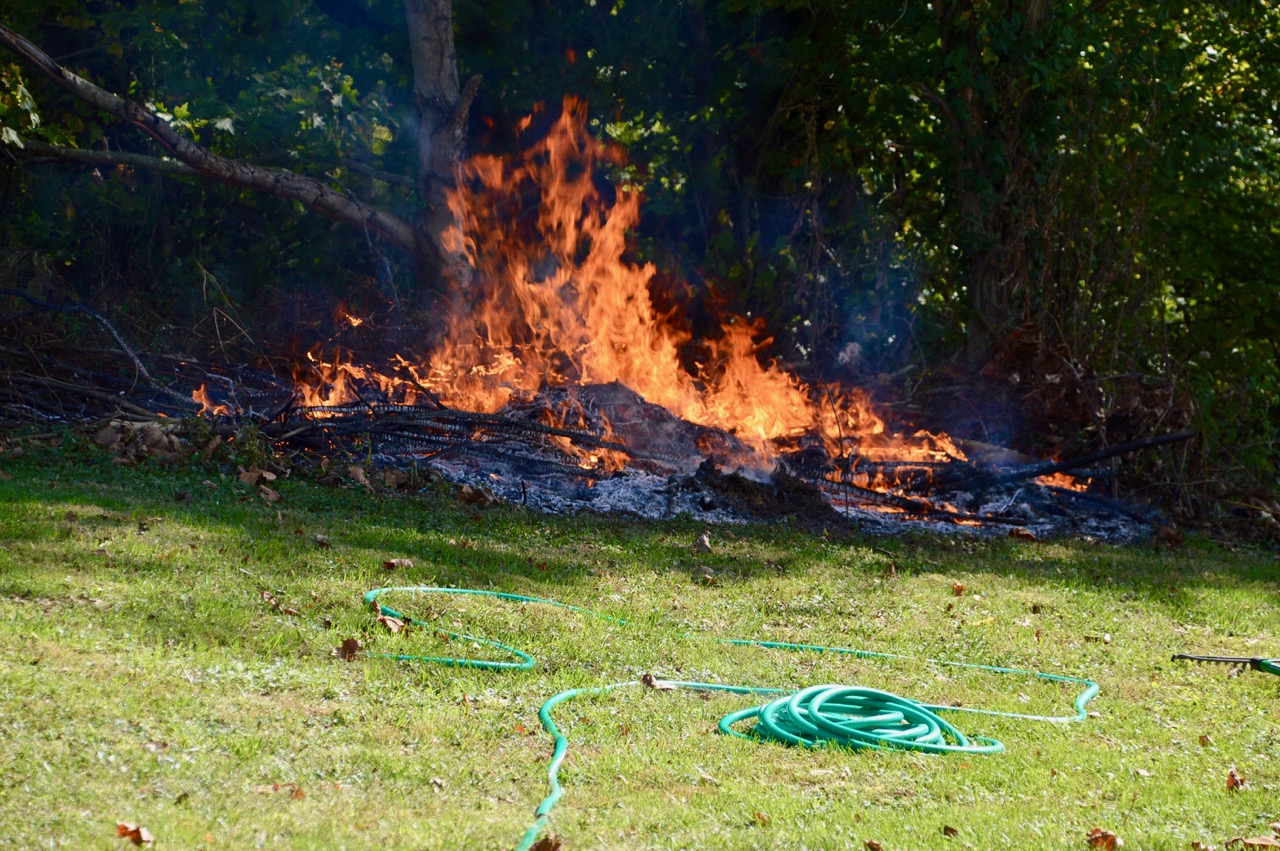 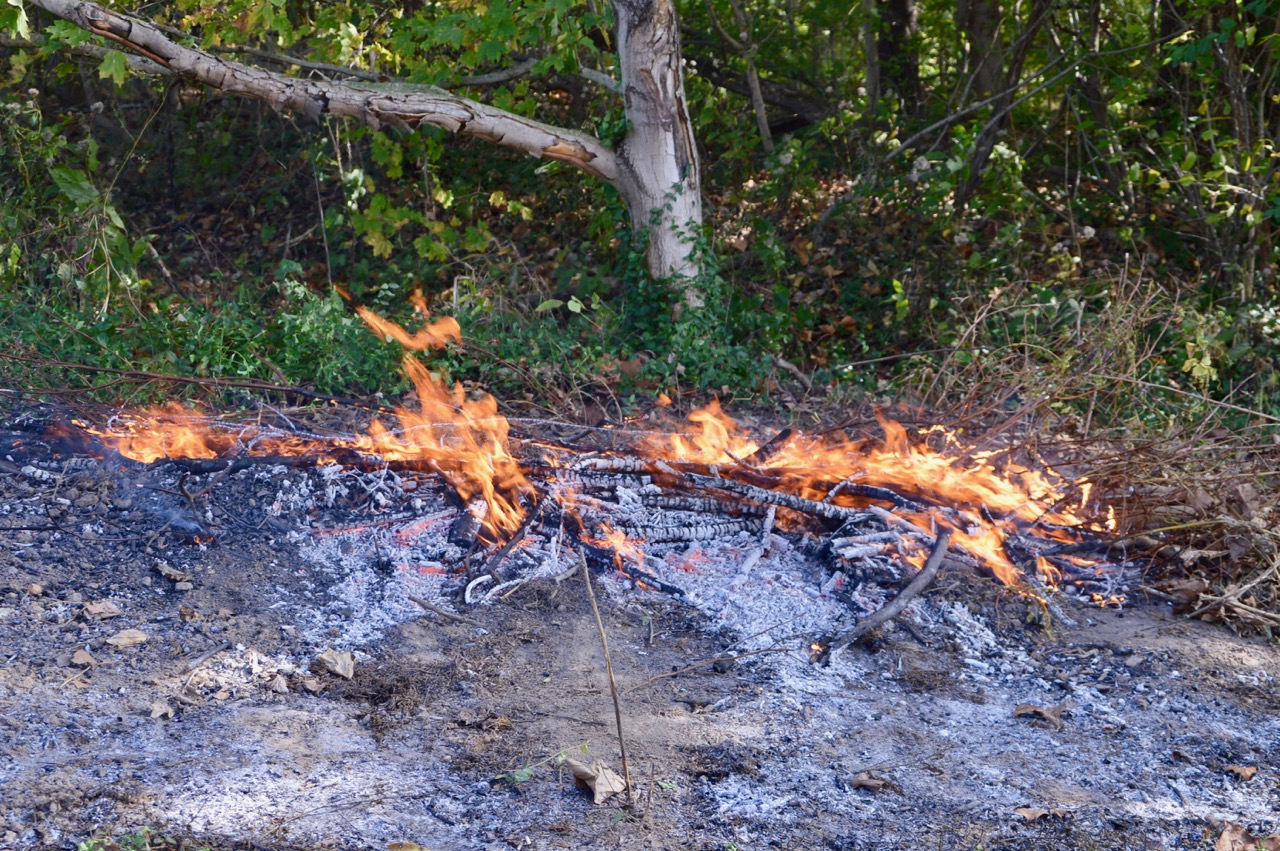 These leaves never caught fire but they were smoldering ... I watered them down with my hose while the pile burned below. I also sprayed water on the dead ragweed and all the green growth behind the fire to keep it out of the woods. 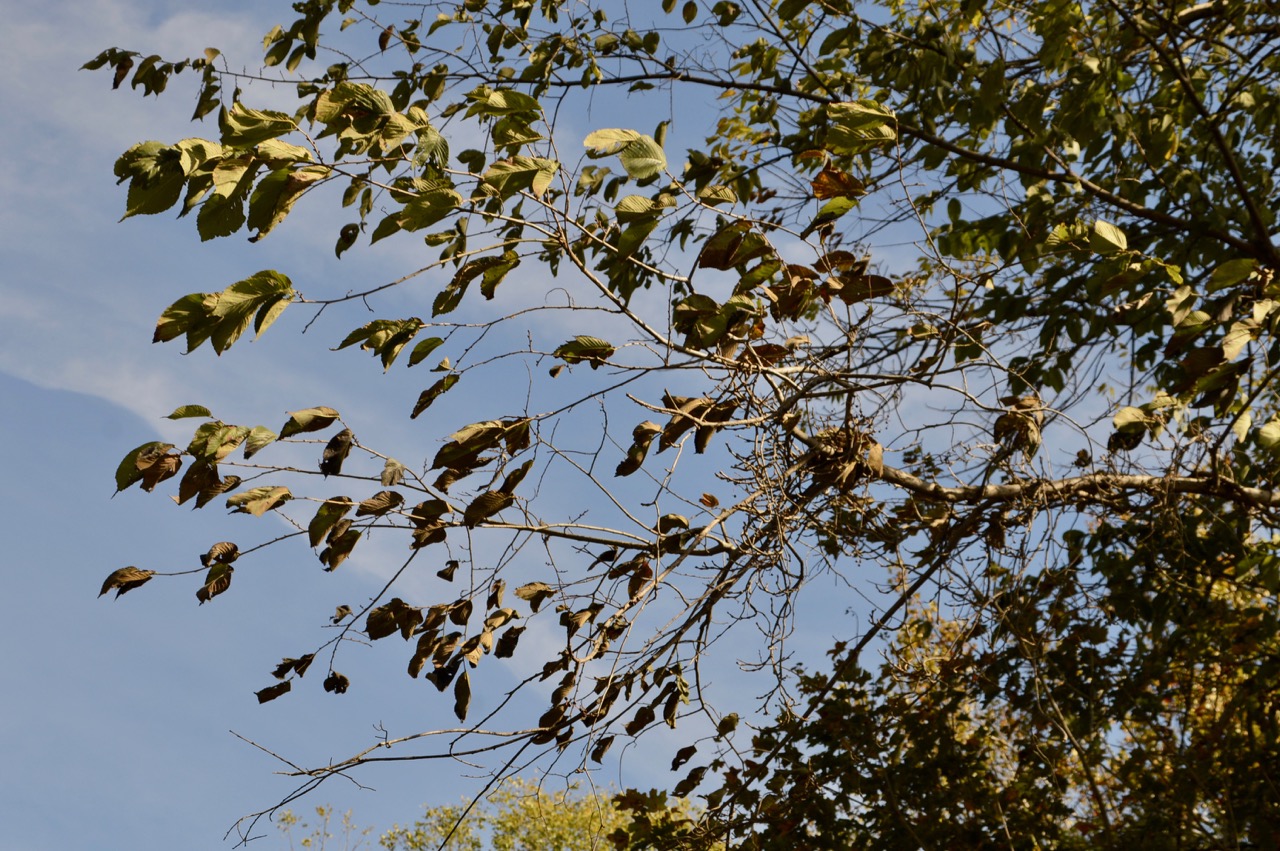 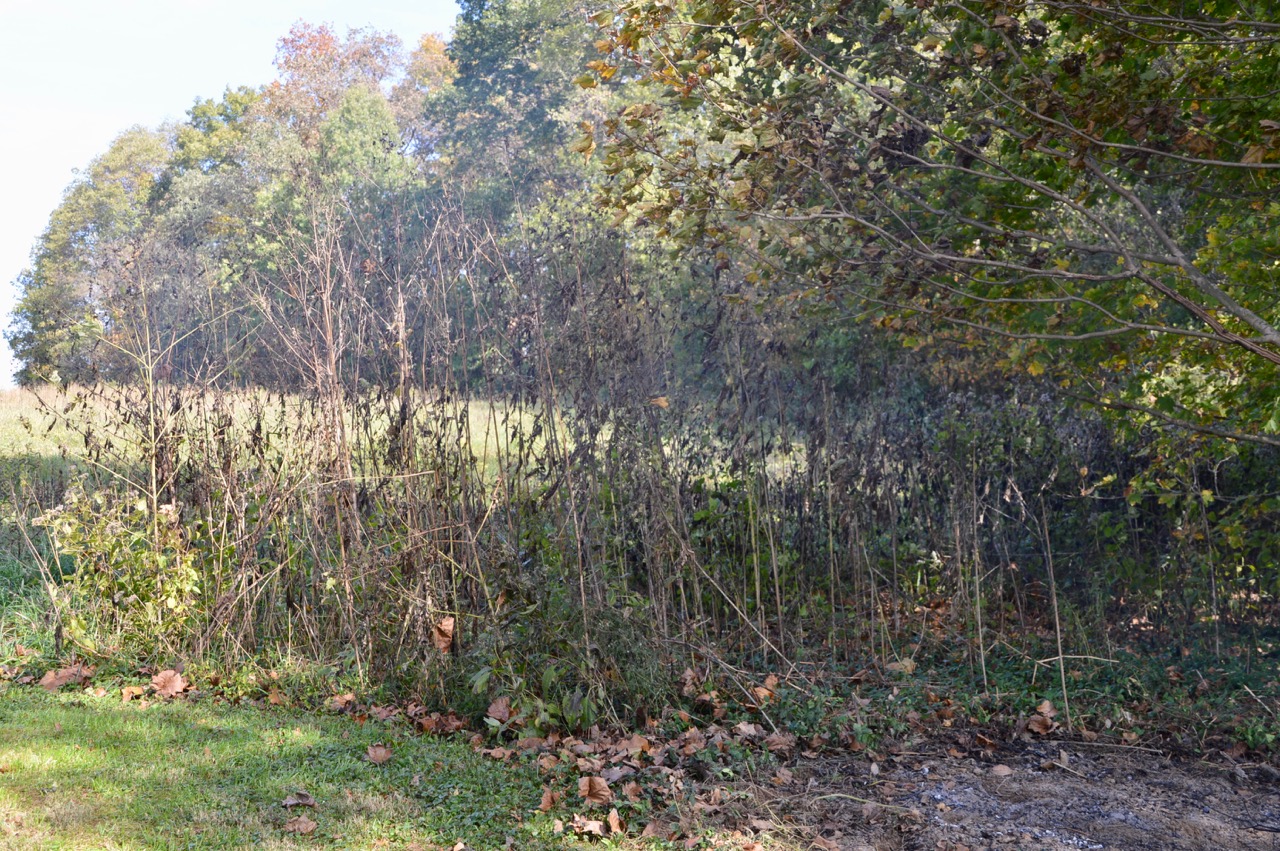 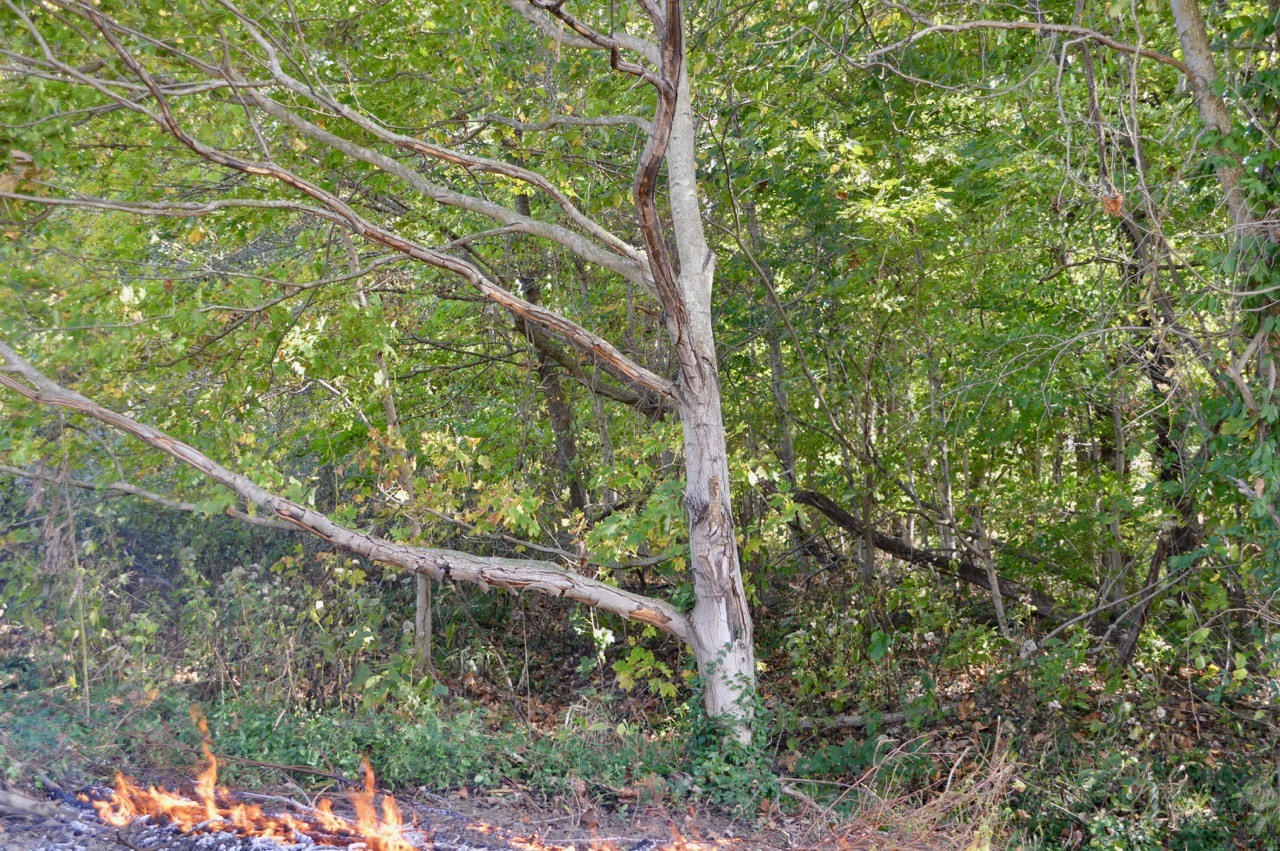 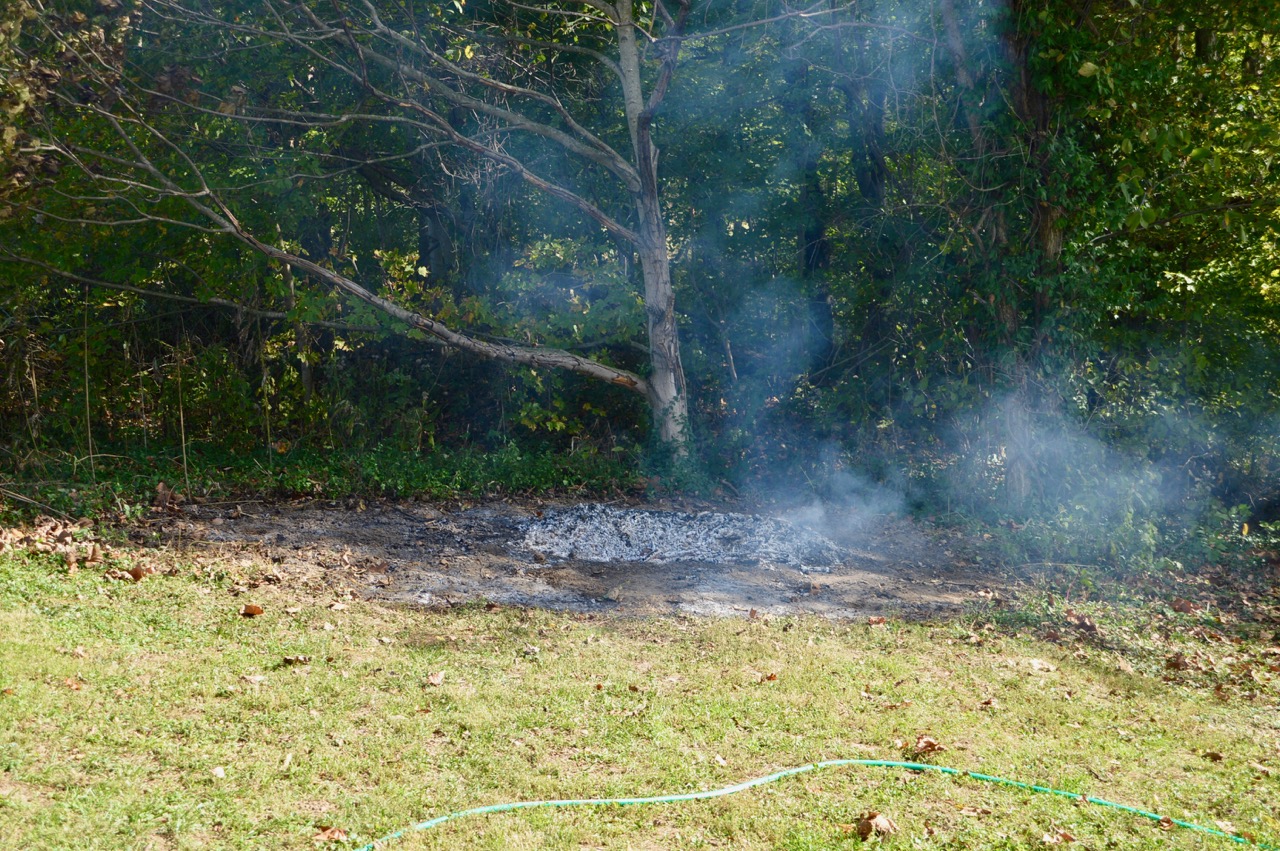 I glanced over into the field and found Sadie staring back at me, checking to see if she could continue roaming the field. She had been out there for more than an hour. I needed to put up the hose and the rake, then clear out all the leaves that had blown up next to the house. I was going to rake them into the yard and mulch them with the mower but thought the easiest way was rake them and then after 3 barrels (32gl) full of leaves I could burn them. 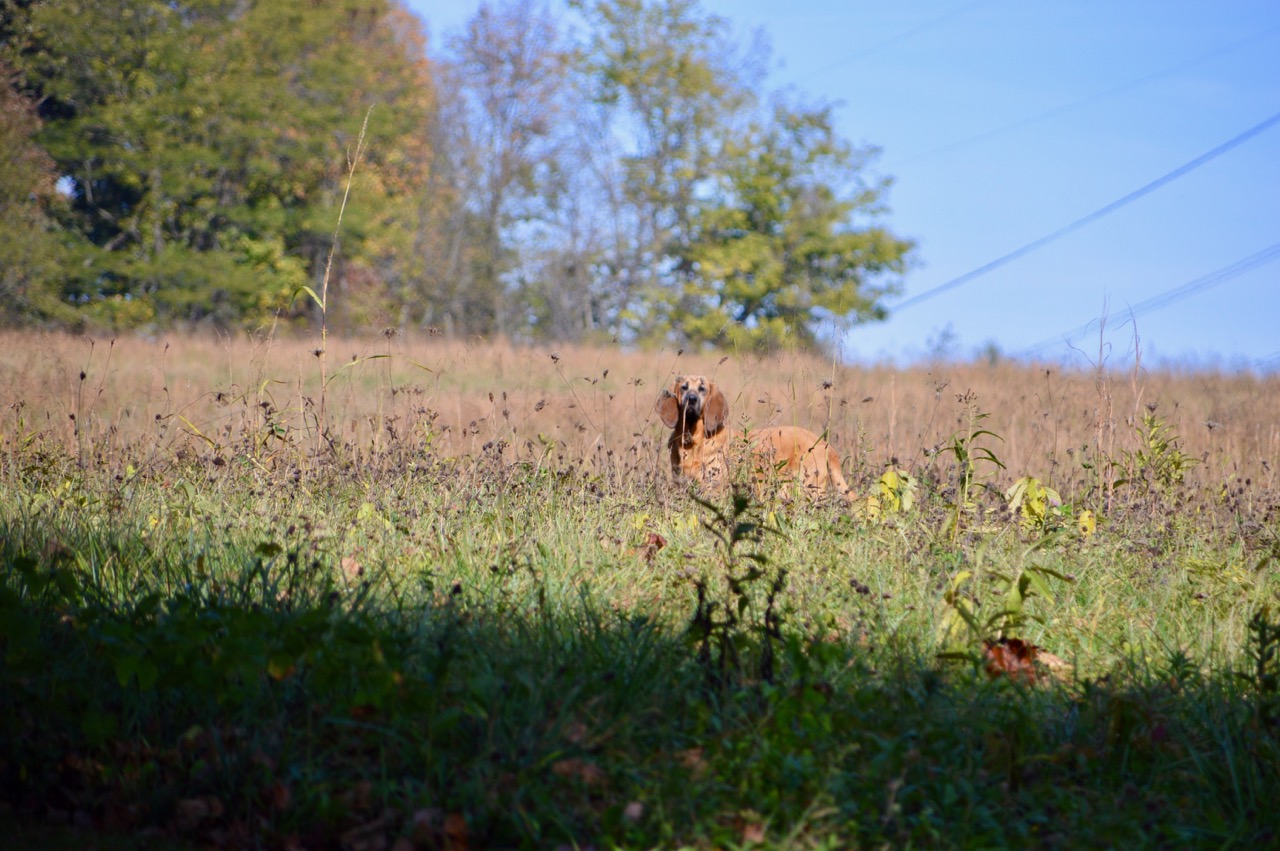 I put Stella in charge of watching the last of the fire just to make sure nothing shot out of that pile of ashes while I put all the tools up and pulled the FJ back into it's parking spot. She must have thought everything was under control because after a few minutes sitting and staring at the burning pile she decided a nap was the better option. 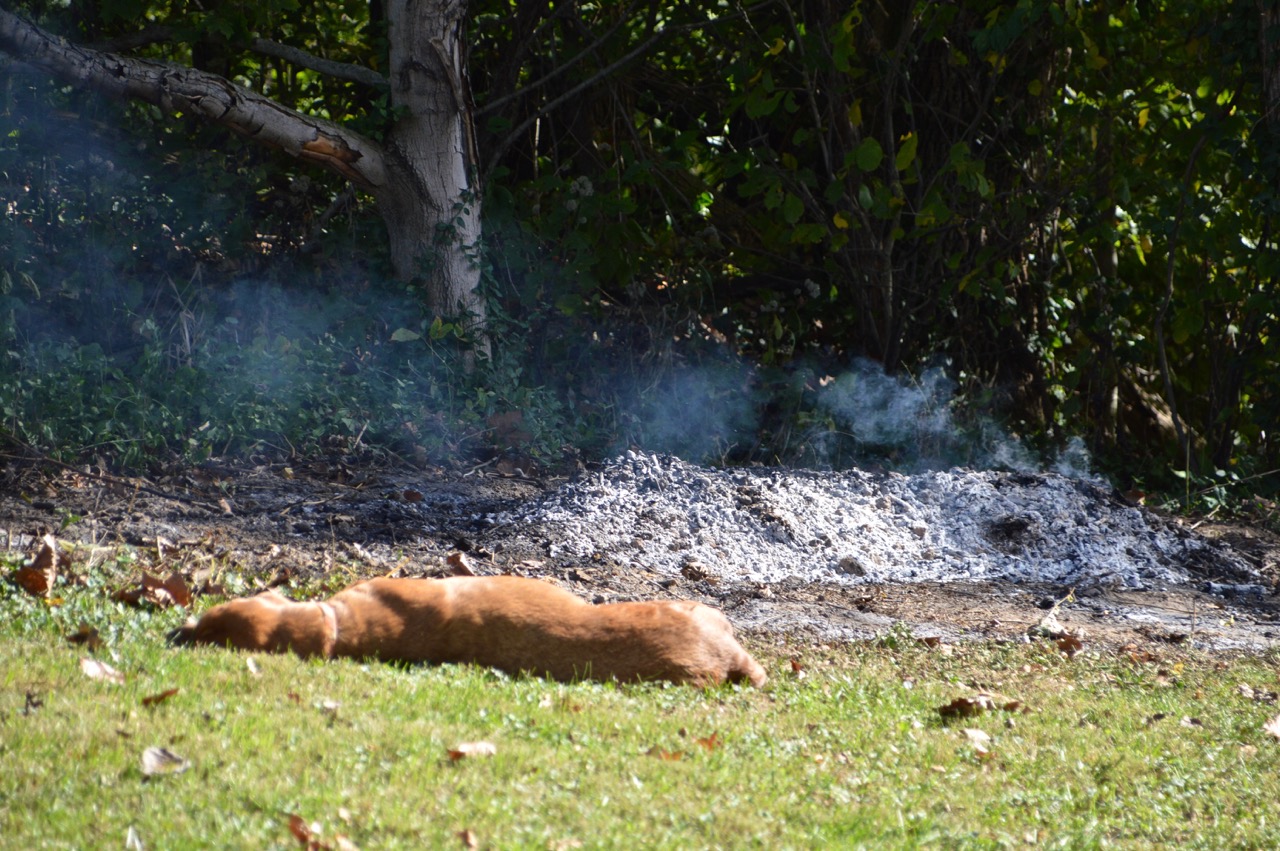 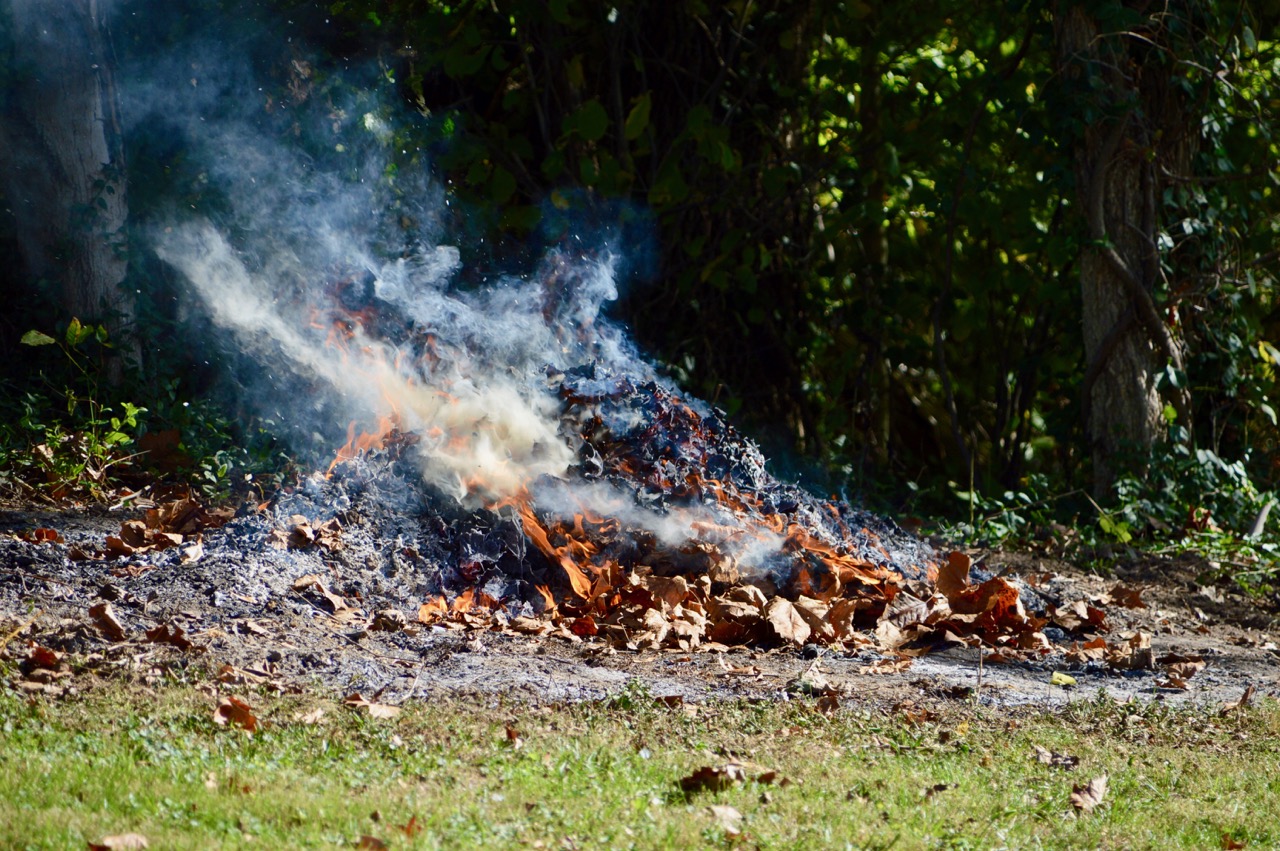 If you look closely you will see the butterfly. 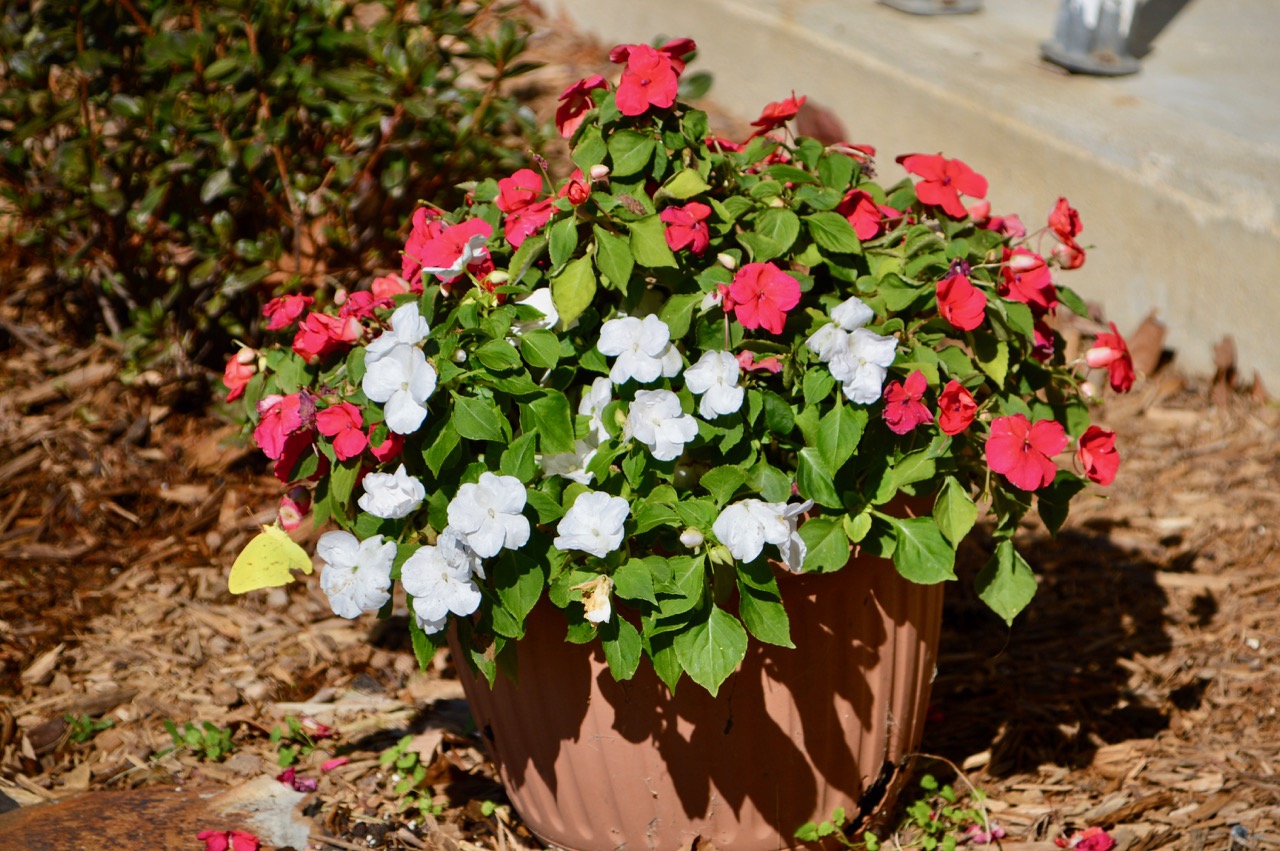 Another thing on the list for this afternoon was buying some new Cyprus Mulch to fill in this side over the older stuff. On the side opposite the carport it was mostly dirt after the Japanese Yews were pulled out. The holes they left were filled back in but there was hardly any old mulch left.

Of course Stella and Sadie needed to make sure I had estimated the correct amount of mulch. 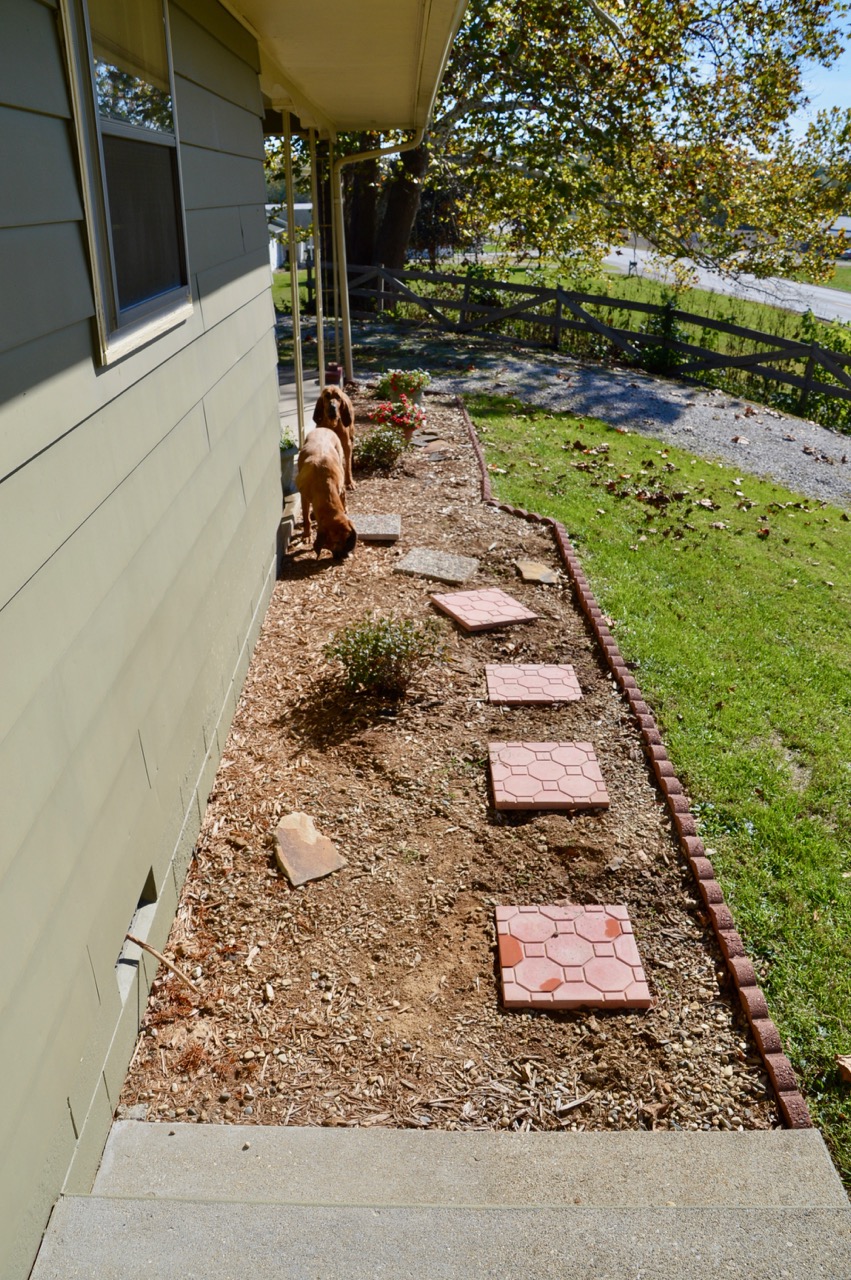 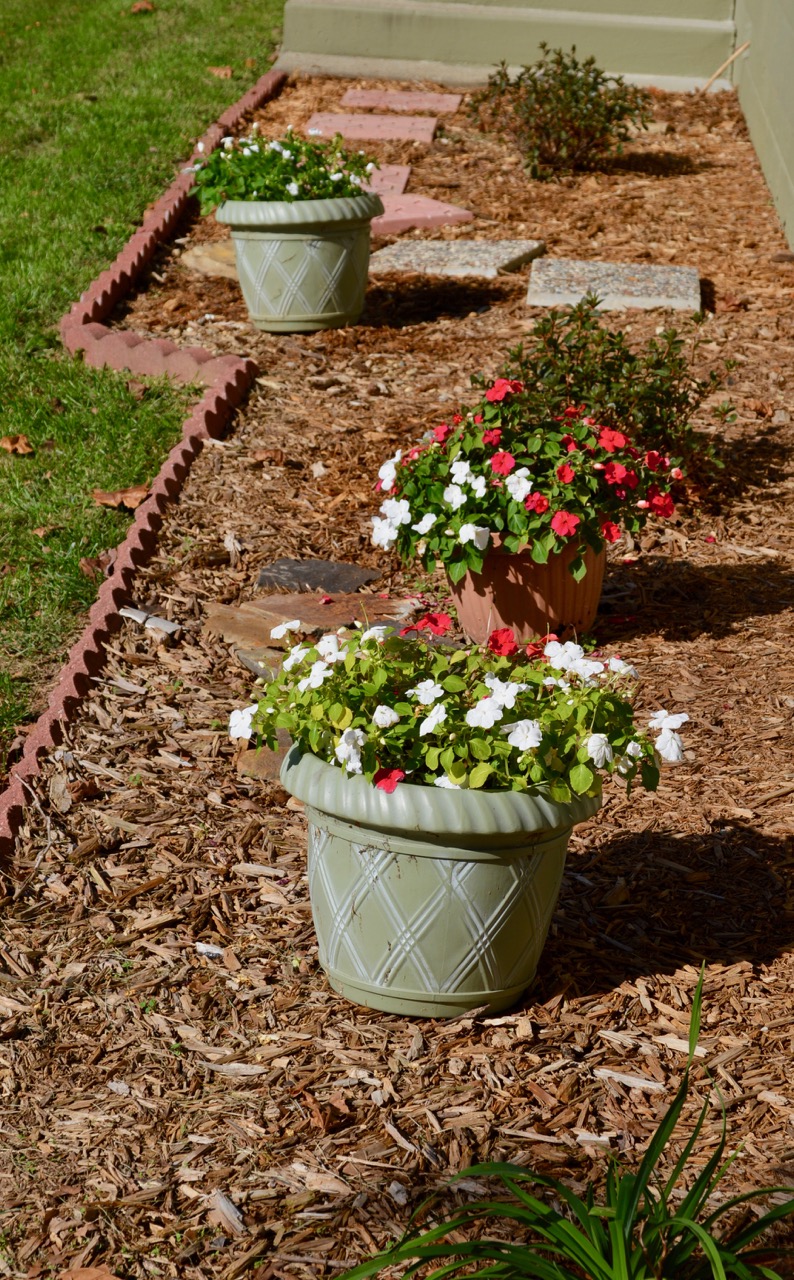 I will sand that rusted steel in front of my crawlspace and paint that the same color as my front door ... a dark brown or maybe a light utility gray. I am still undecided what I am going to plant here next spring. Here are the before and after photos. 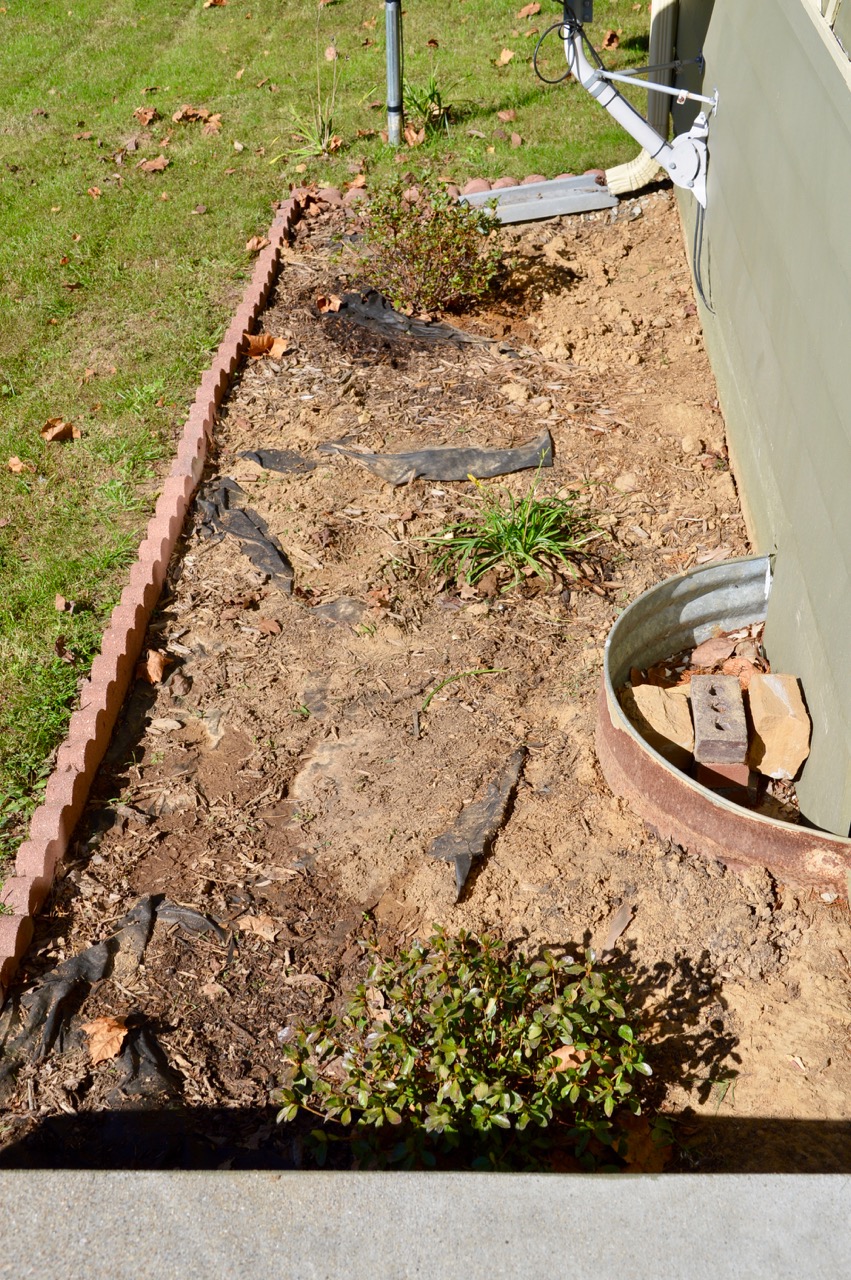 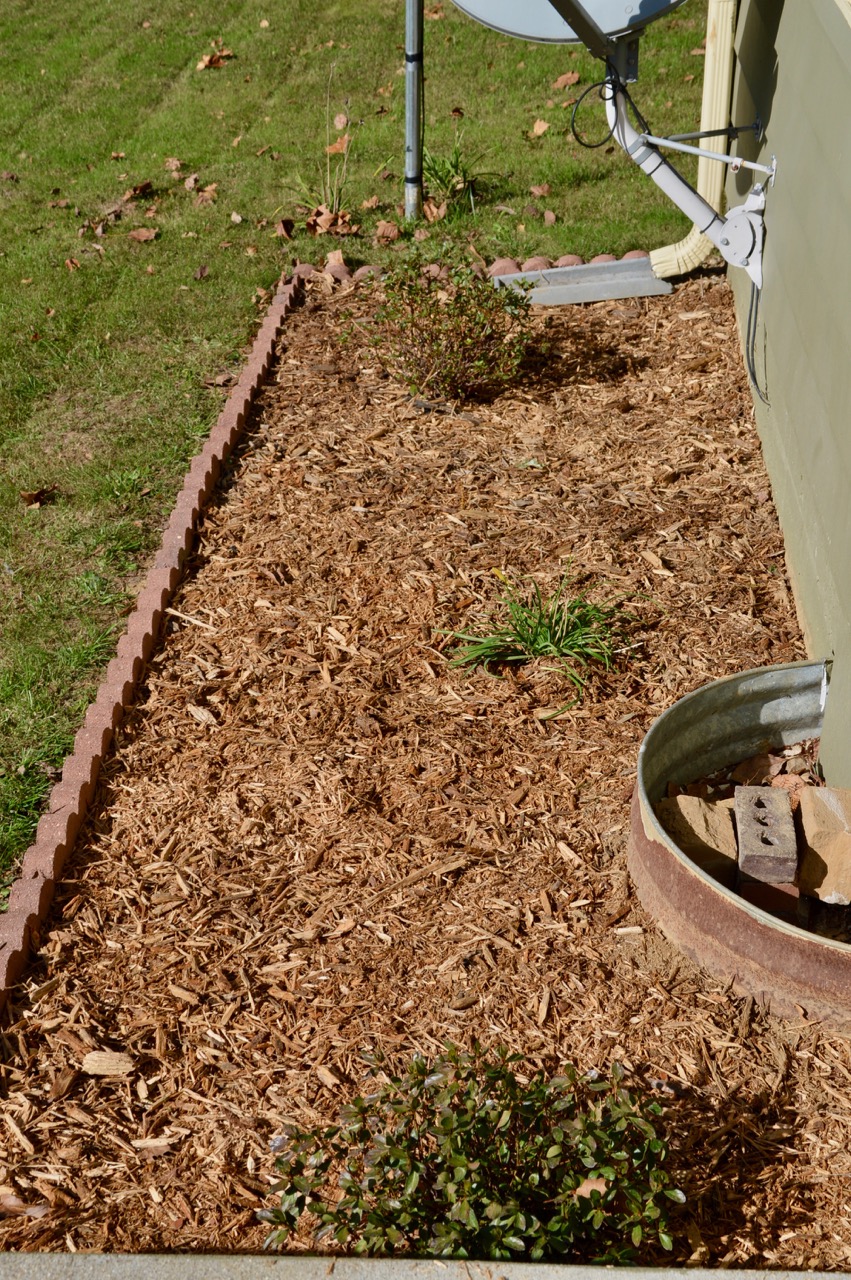 I am concerned the Azaleas will not survive the winter. To keep them living so far I had to water them every few days because they don't get enough rain water. A few of them in front of the carport are too far under the wide overhang to get the full amount of rain. I am pretty sure you will not see me blogging about being out here in the middle of winter, in 20-30 degree weather watering them.

I liked that the Yews had a great green color year round and the only thing I had to do was trim them a couple of times per year. The problem was this last time I trimmed them, their stems were getting so large that my electric trimmers could not handle the diameter of the stems. Plus I did not know if their root system was deep enough that it was damaging my septic tank system.

I do like the open space in front of the house. It's easier to get into the crawlspace since I don't have to crawl through and under the Japanese Yews that were blocking the entry. It will also be easier to to drain the septic tank from the inlet side.

We fit in 3 hound walks today by 5:15pm, plus the yard work, etc ... I am tired but have only one baseball game to watch tonight. It will be early today bed tonight (~midnight) so I will be rested for my 14 or more hours of college football on Saturday.

My jaw was killing me last night between 5pm and 1am ... today there was no pain at all. Strange.

It was a successful afternoon here in 'the tropics' today ... gutters cleaned out and I didn't have to call the local Fire Department to put my fire out.
at October 20, 2017