The Hounds Battle Frost This Morning 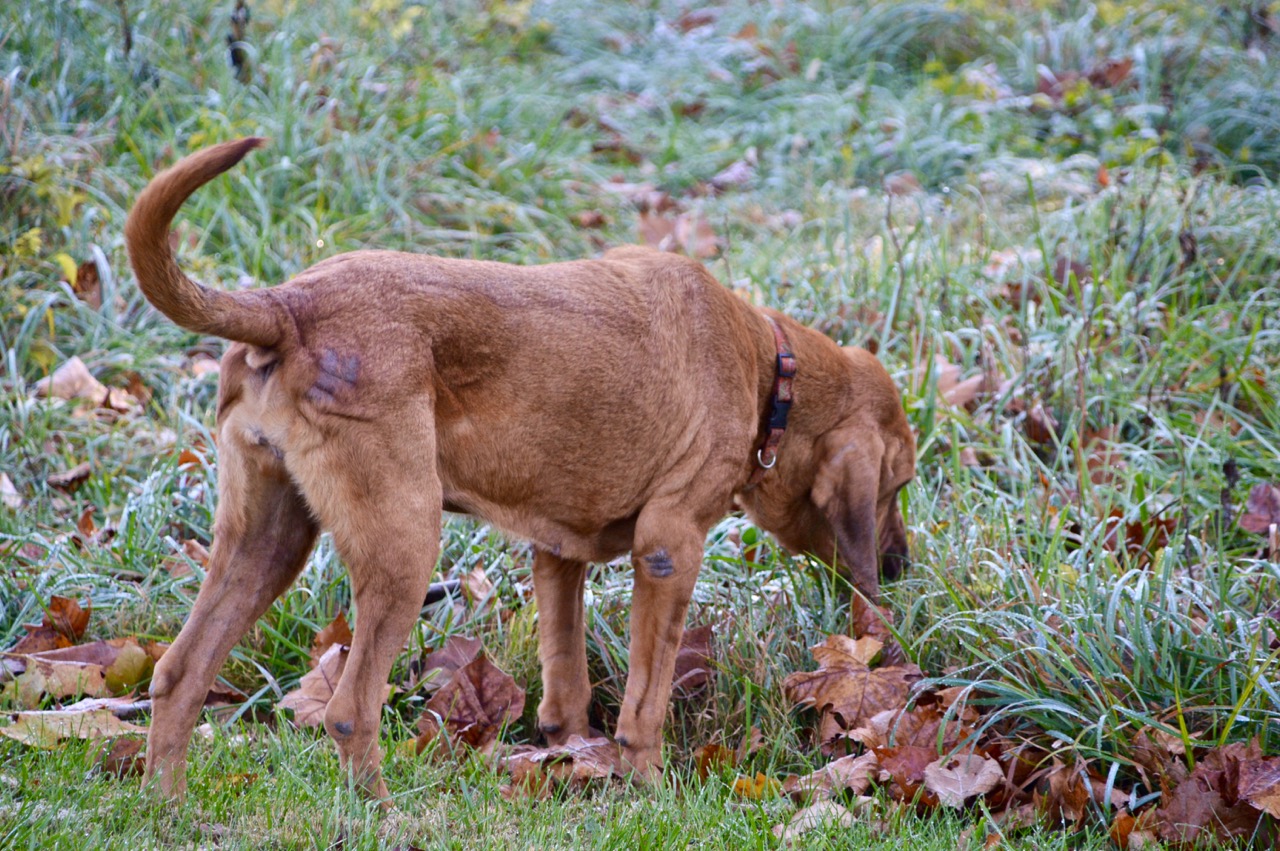 With my iPhone weather telling me it was 30° outside I decided to try something different with my North Face jacket that is for warmer temps ... I wore a down vest under it, keeping me warm and freeing my arms to move more than if I had worn my ski parka. With the combination of frost and heavy dew I did not hear the grass and leaves crunching under my boots. Stella enjoyed some frozen green grass before she started her walk this morning.

Also for the first time I turned the heat on low last night while we slept. I keep my house temps pretty cool but I knew it would drop below our threshold since it was going to drop below freezing while we slept. 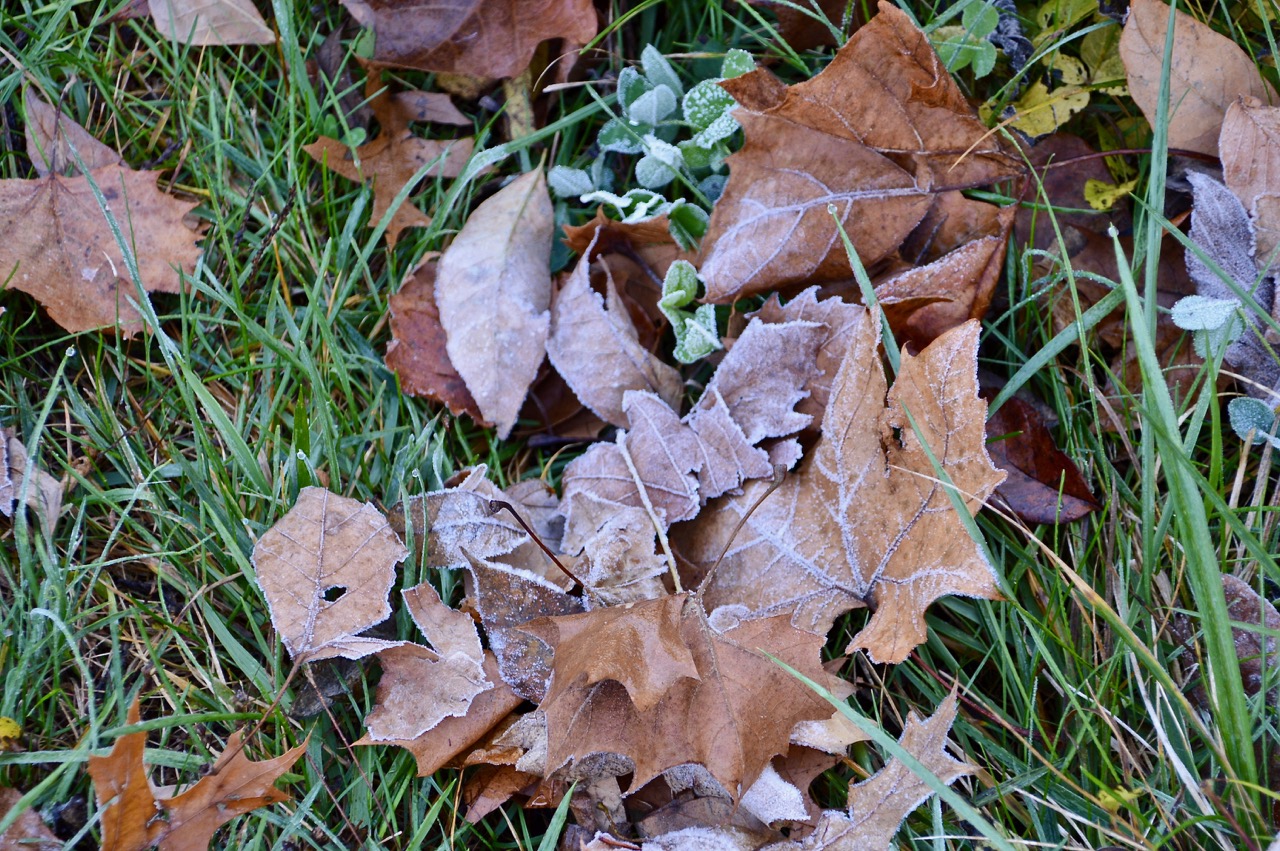 Contessa made a comment on yesterday's post that none of the hound walks were routine, that each was different. I forget that sometimes since we walk the same path in the same field and seems to be the central point of this blog anymore. I guess I need to get out and drive the local area more, taking photos of that. 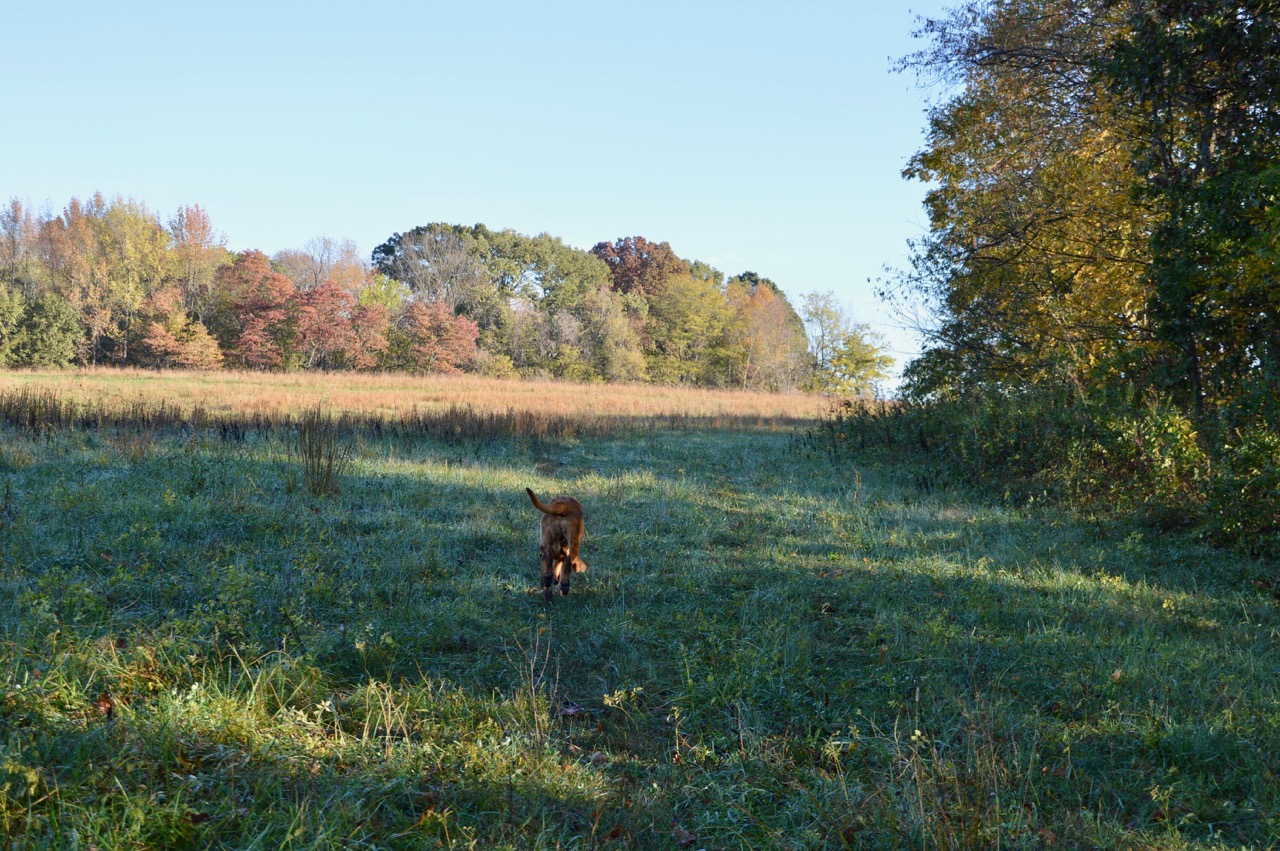 This walk was started off entirely different than recent walks. From the start Stella headed north while Sadie and I walked out into the field due east. For some reason I didn't want to let Stella head that direction on her own today. I found out the reason until I came back at the end of the walk.

On the way back, taking the alternate path to the corner of the north property line, both hounds stopped and stared next door and was almost starting to run after the neighbor. He had backed his pickup truck down the driveway to pick up his trash cans by the highway and bring them back to his house. Sadie and Stella thought he might need help.

I had to yell "No" to keep them with me and herd them back toward the house. If I had left Stella on her own I have no doubt that now only would she have been next door but down by the highway once she saw the neighbor step out of his truck. 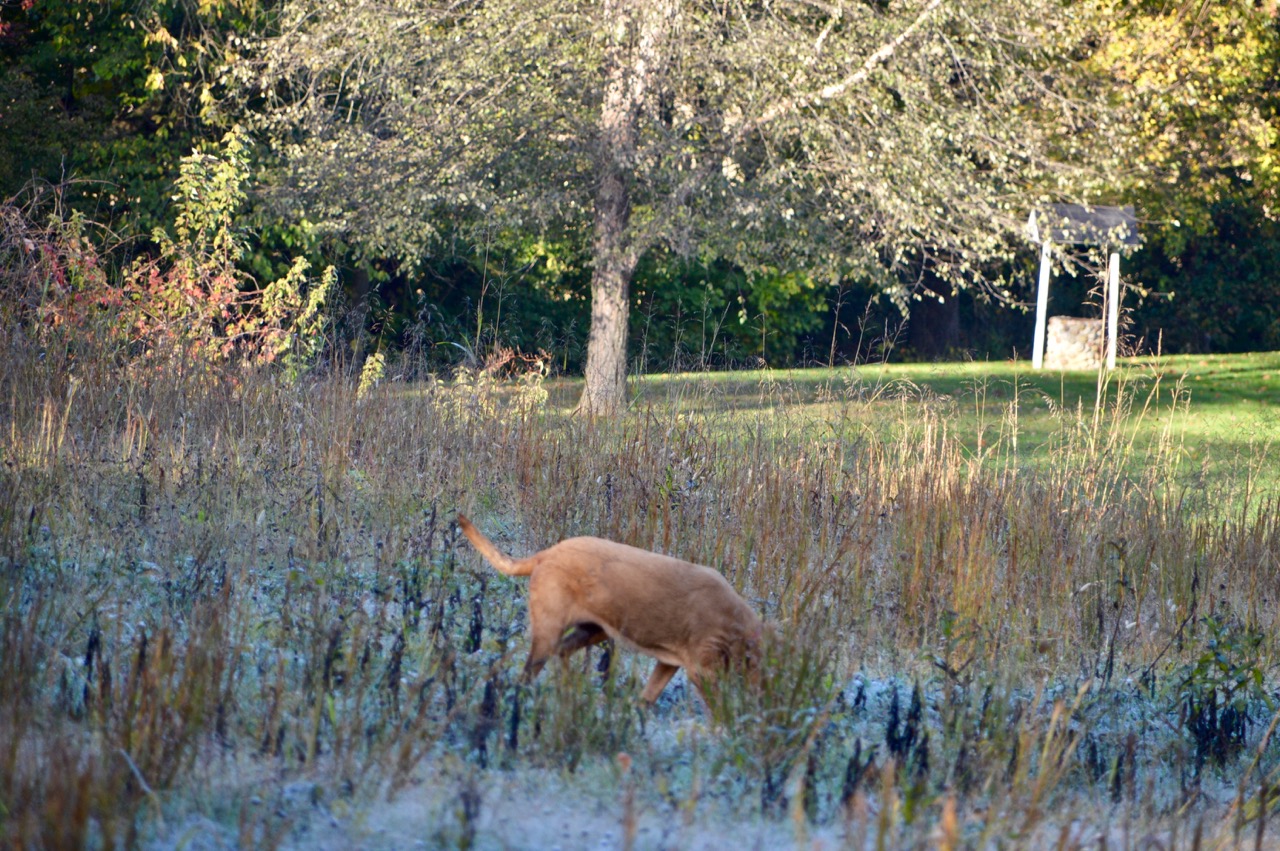 So I walked over to the middle of the lower field and told Stella she needed to come my direction. After a few steps with me back toward the path, she took off running to catch Sadie and both of them were off due to what their noses had picked up. 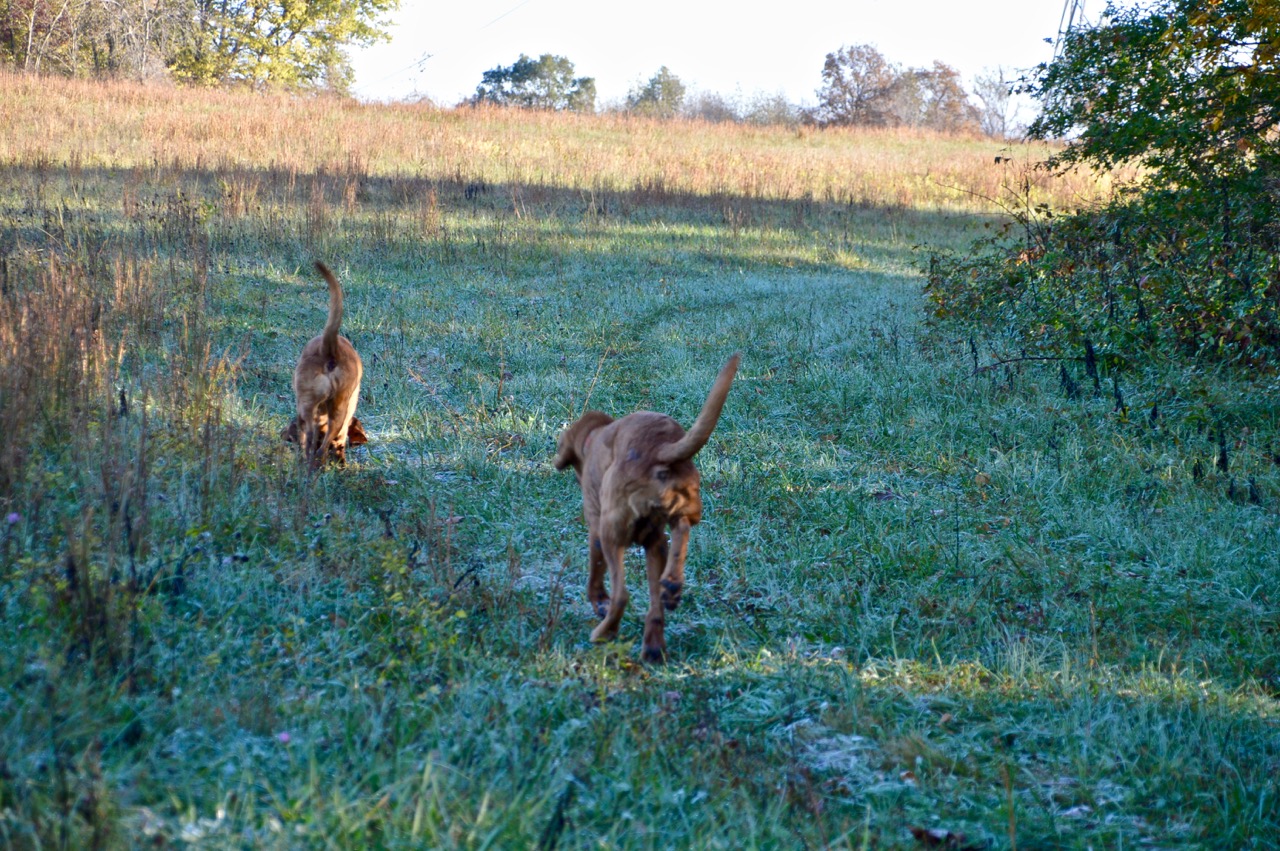 I had not made the first turn yet when I glanced down and my hiking boots were completely soaked. It looked like some of that dew had froze just a little. My feet were still warm and dry. 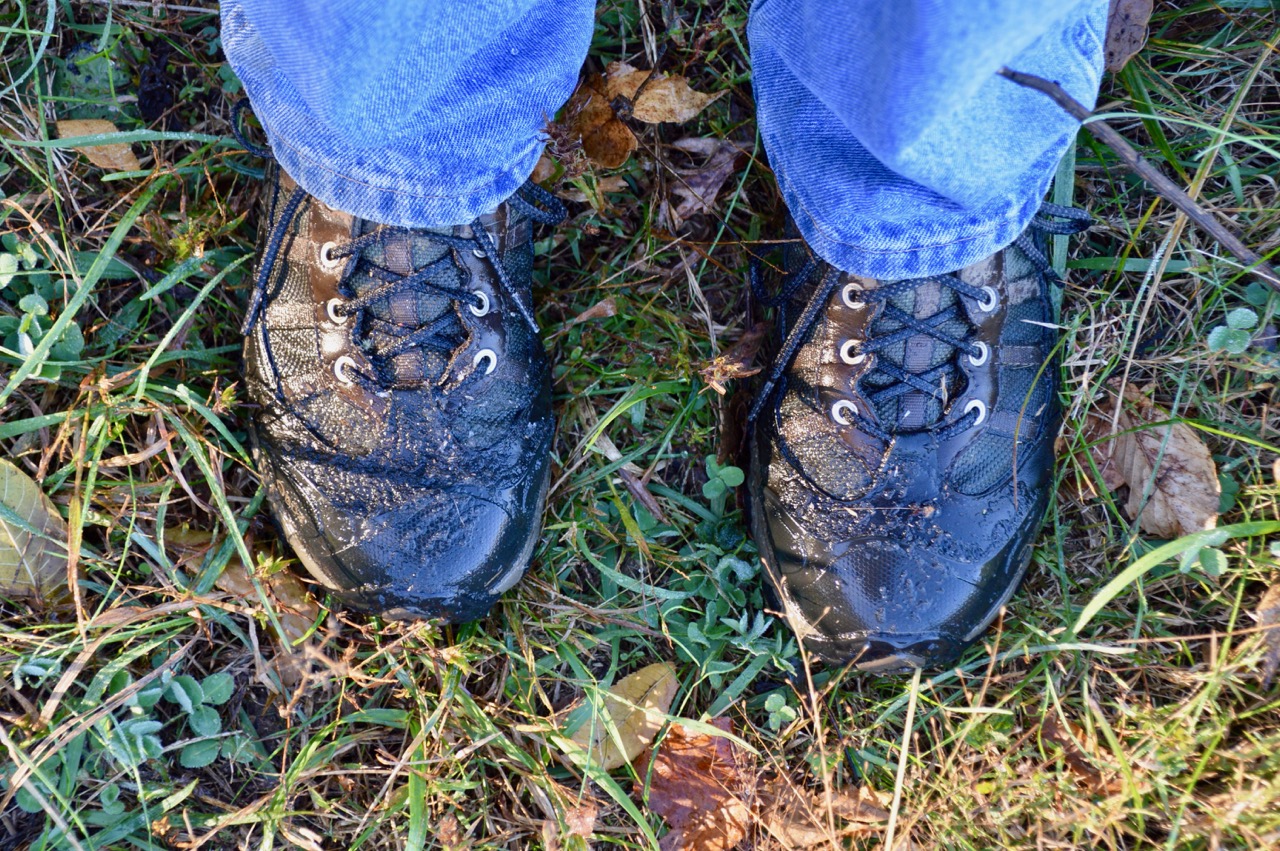 When I see a look like this from Sadie it's time to be aware of what might be in our area and I might have to take off running. 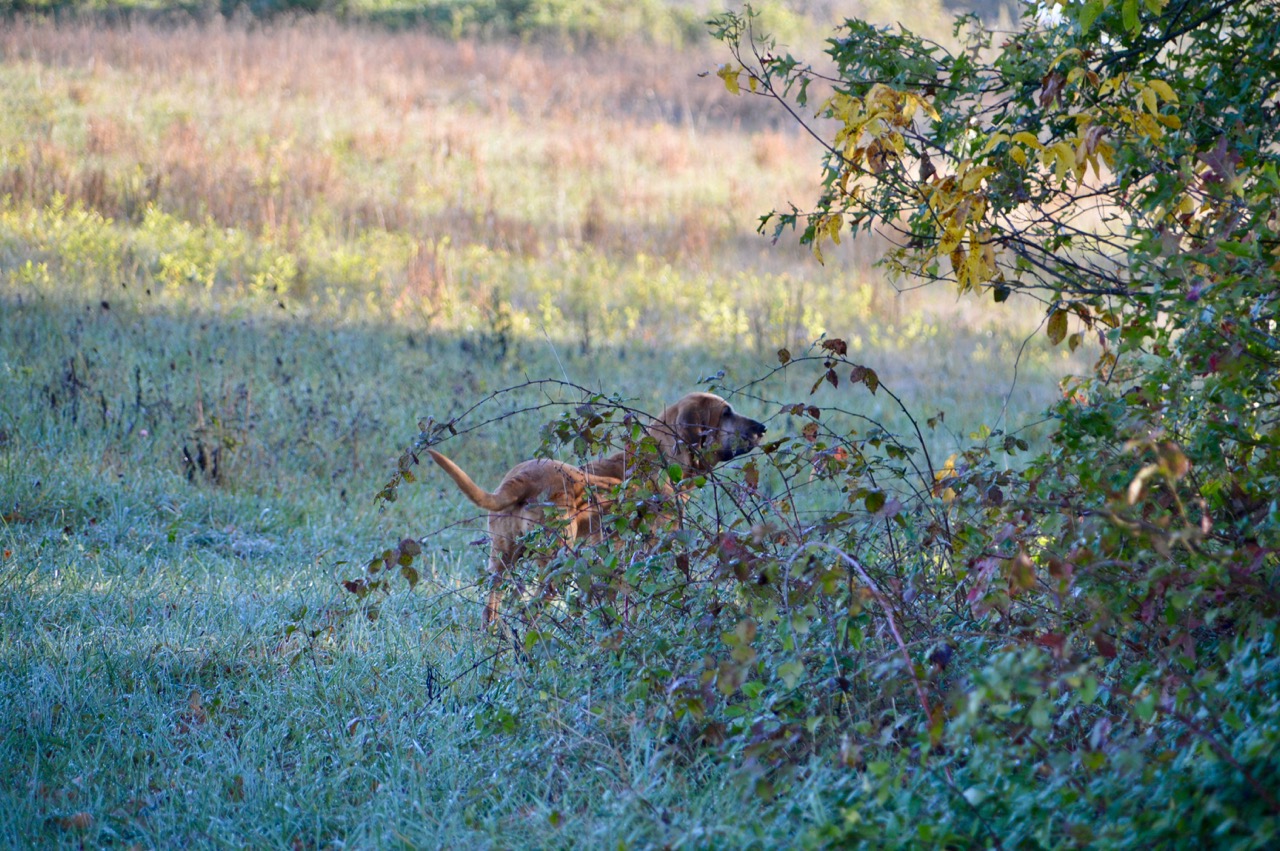 Then I see Stella in this pose and I am almost certain I am going to have to run after them this morning when I am really not in the mood to jog. I only jog to and from the fridge during a close game on tv and it's a short 30 second timeout. I only jog in this field when I am desperate in catching the hounds. 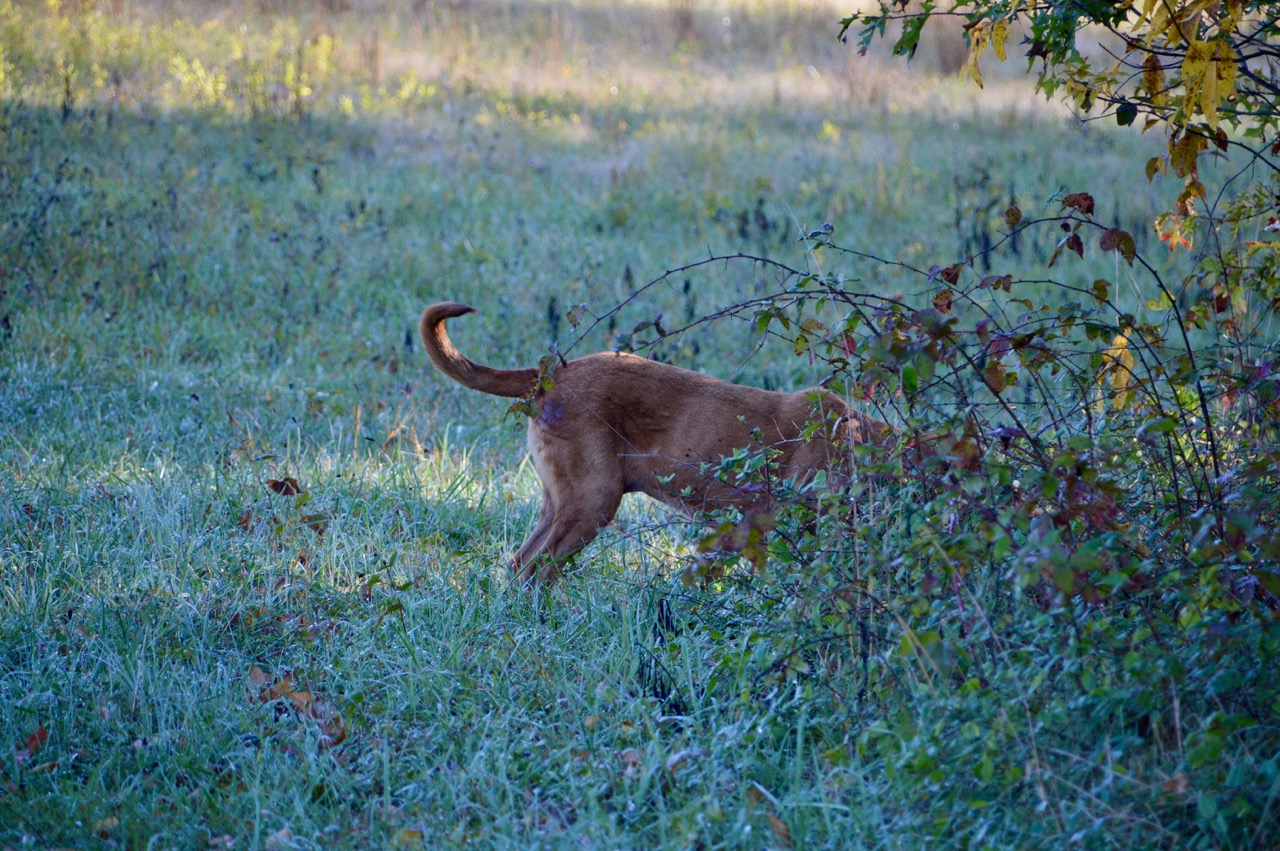 We must have missed the deer by minutes or just an hour. It didn't matter by the way the hounds acted. As far as they were concerned, deer were just ahead of them and reachable if they ran fast enough. 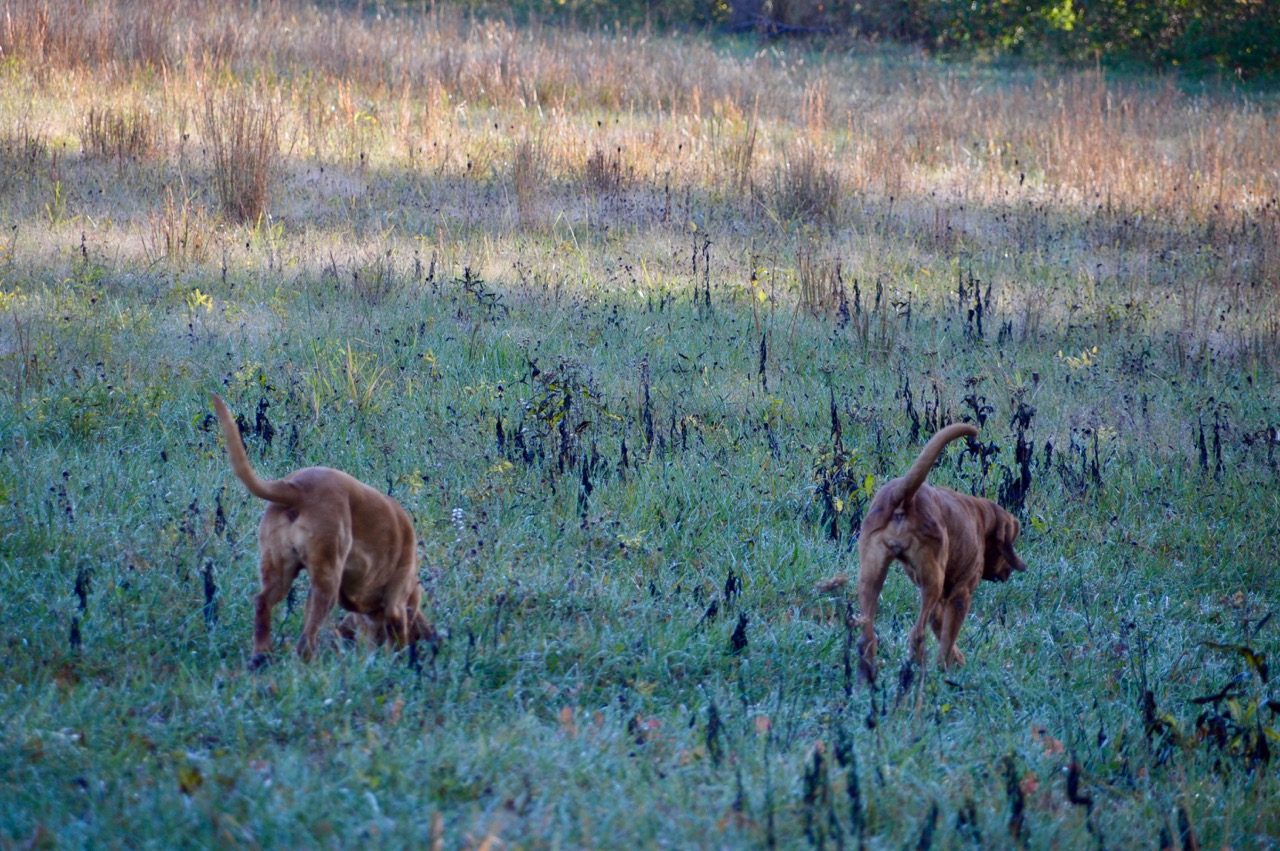 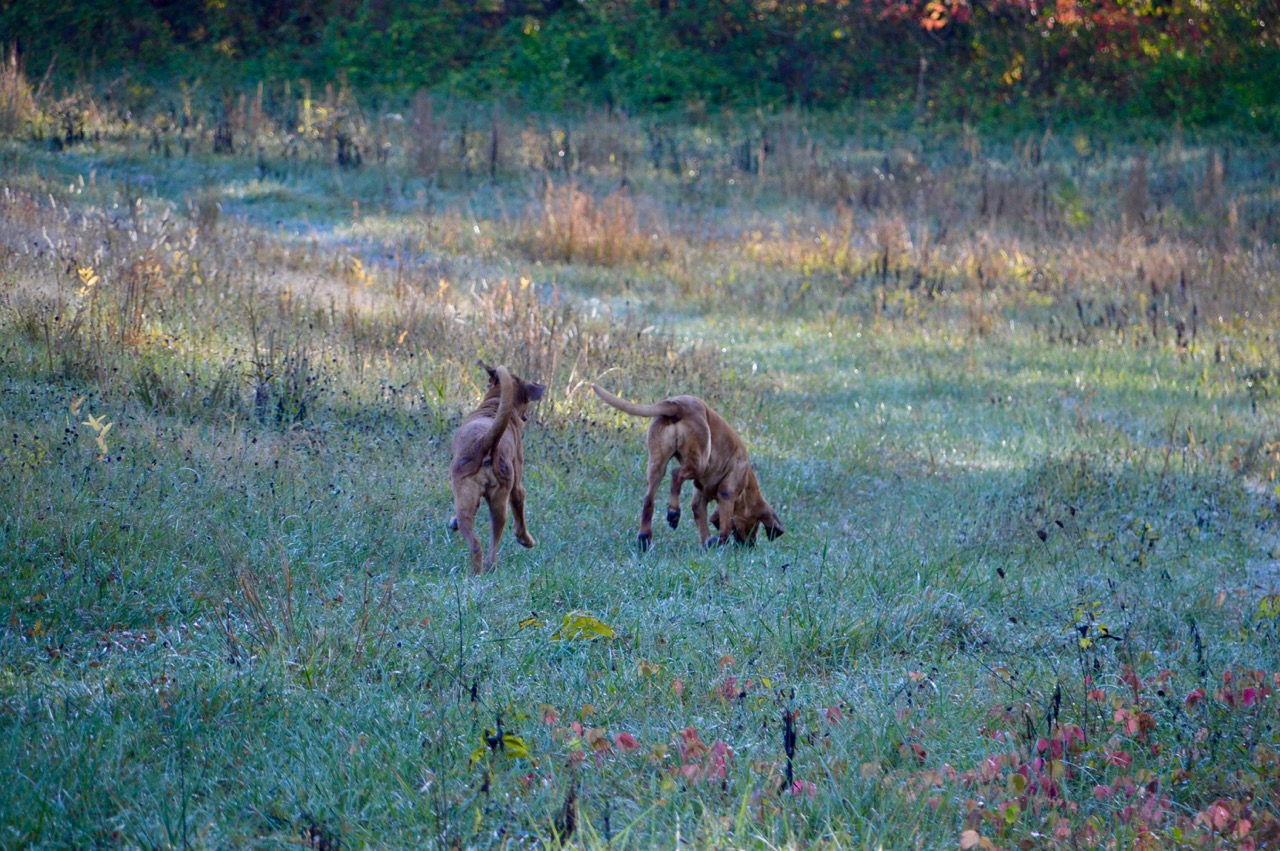 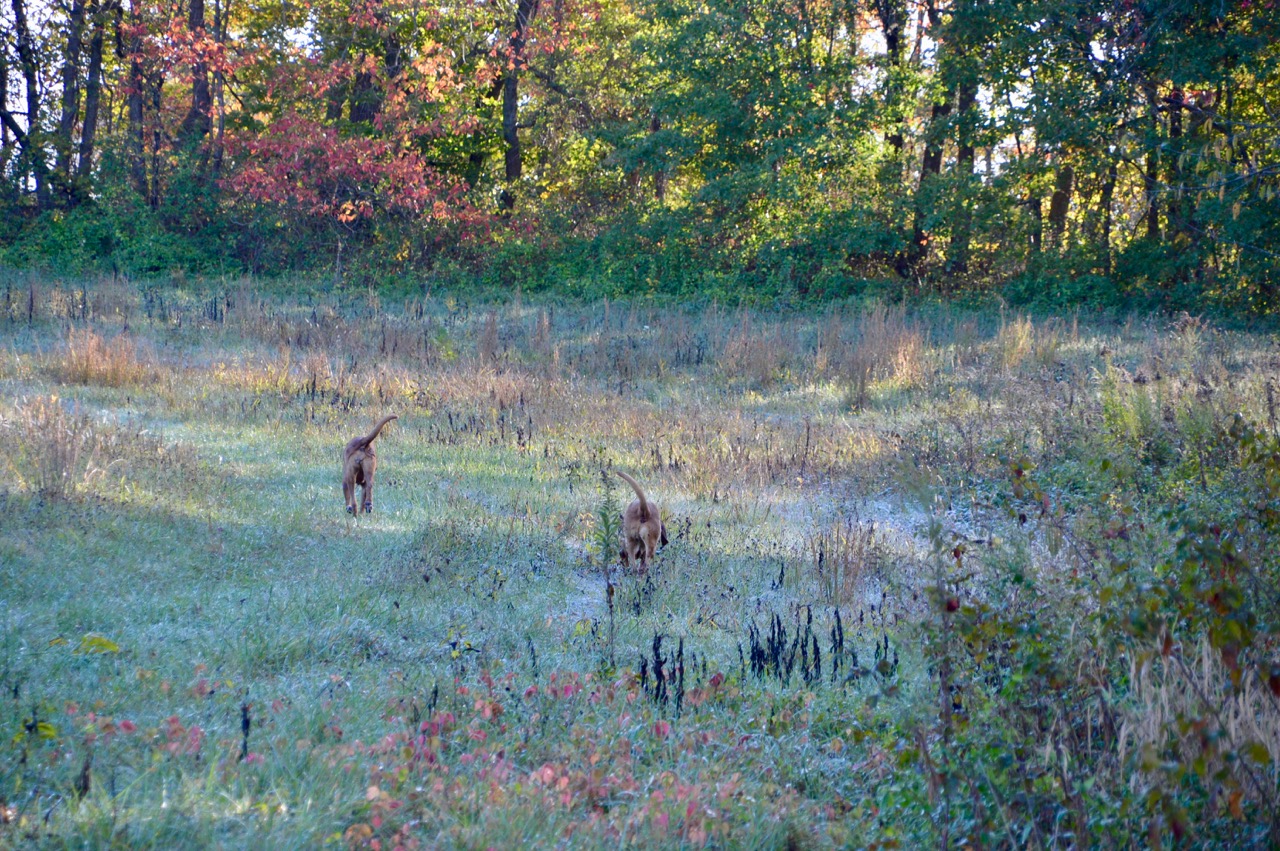 Consequently they were way ahead of me. 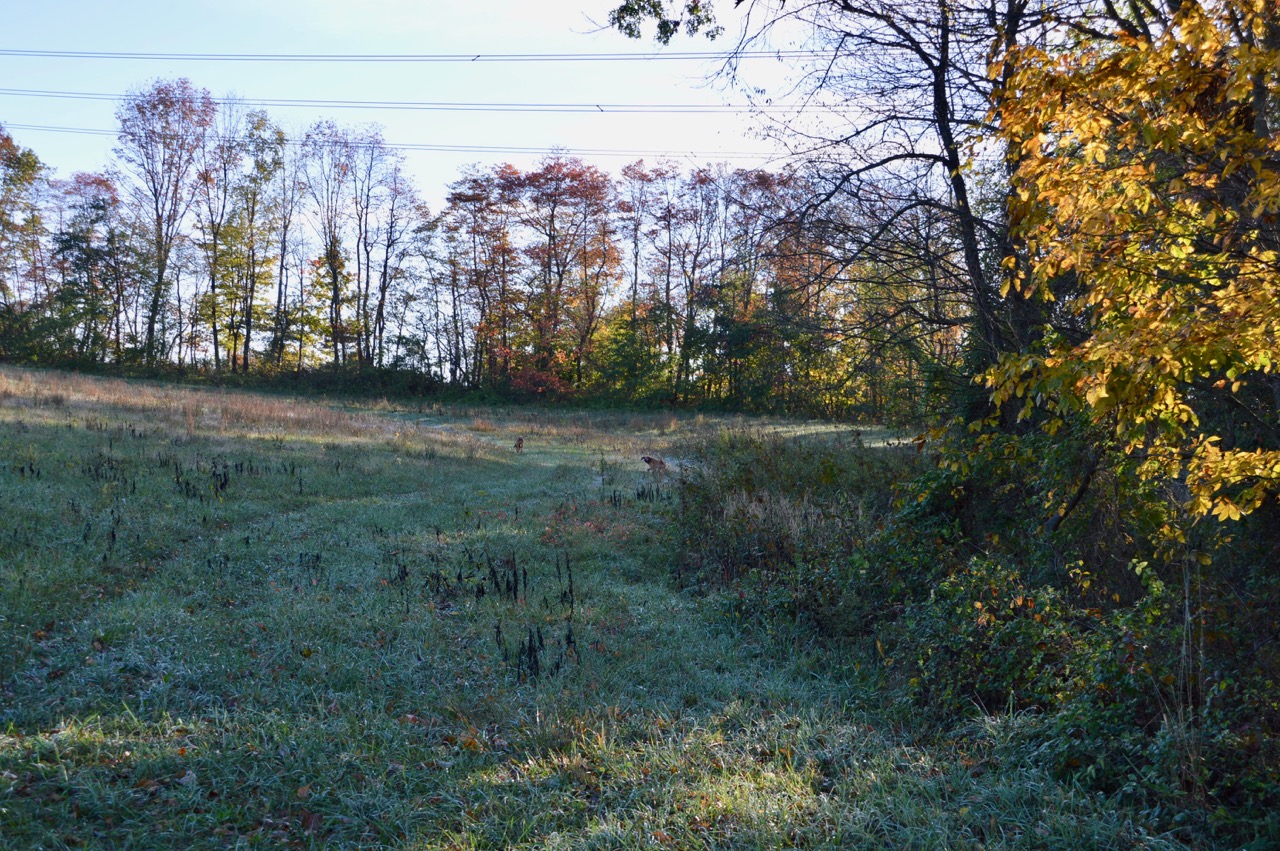 About the time I convinced myself that I would be jogging, then running along the back edge of the field heading north ... both hounds made an abrupt right turn into the far right corner where the deer scent was stronger. That was good for me as that part of the field would do the 'herding' for me. 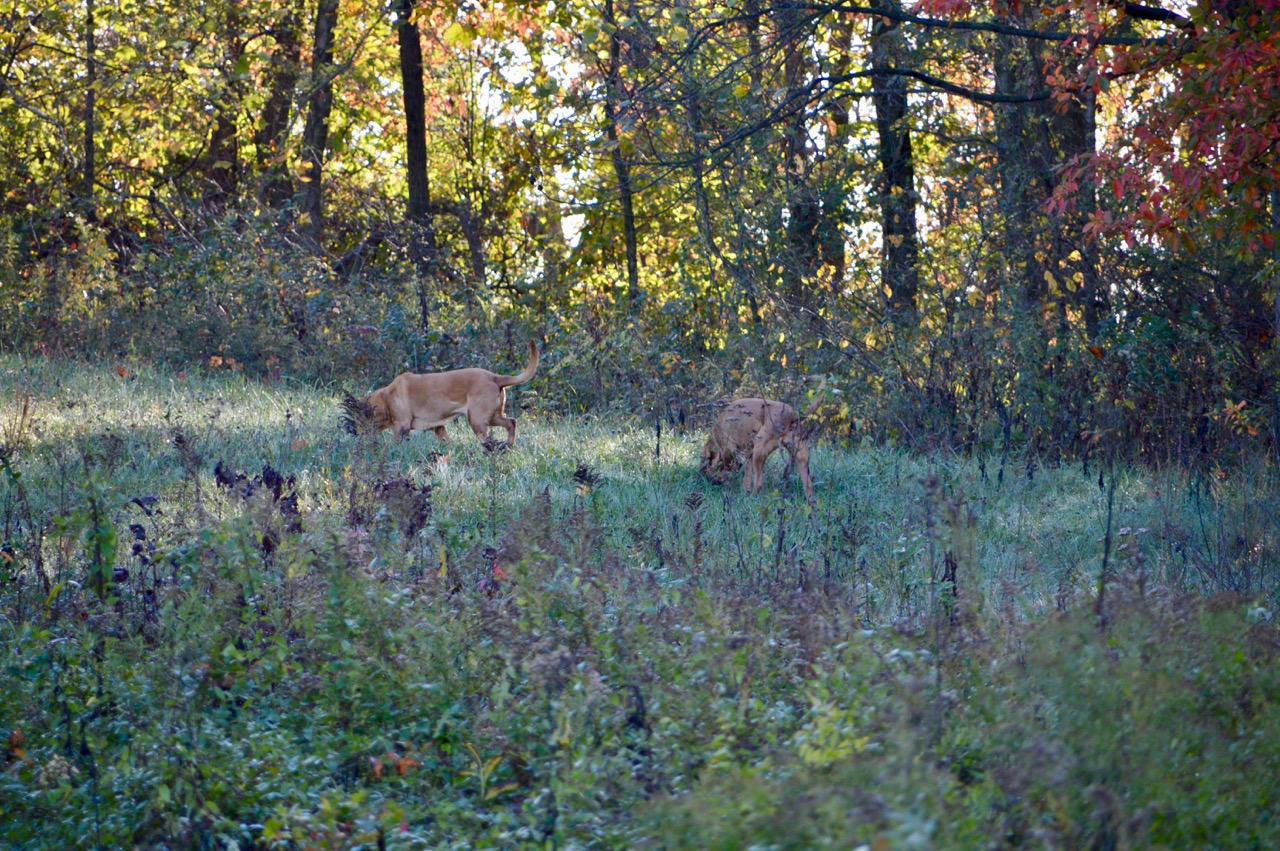 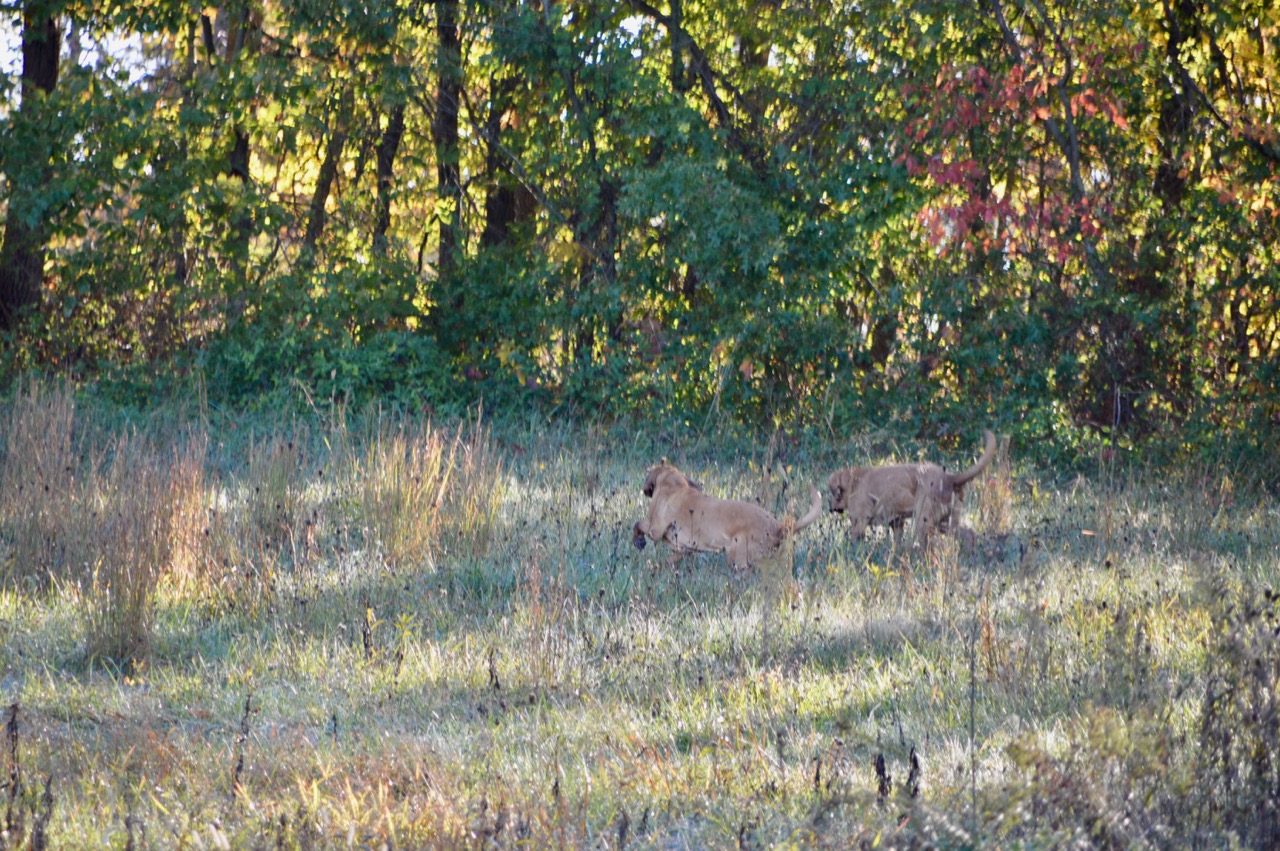 It was at this point of the walk with them picking up their pace that I yelled "Hey" ... getting both of them to stop and let me catch up. Otherwise they were gone. 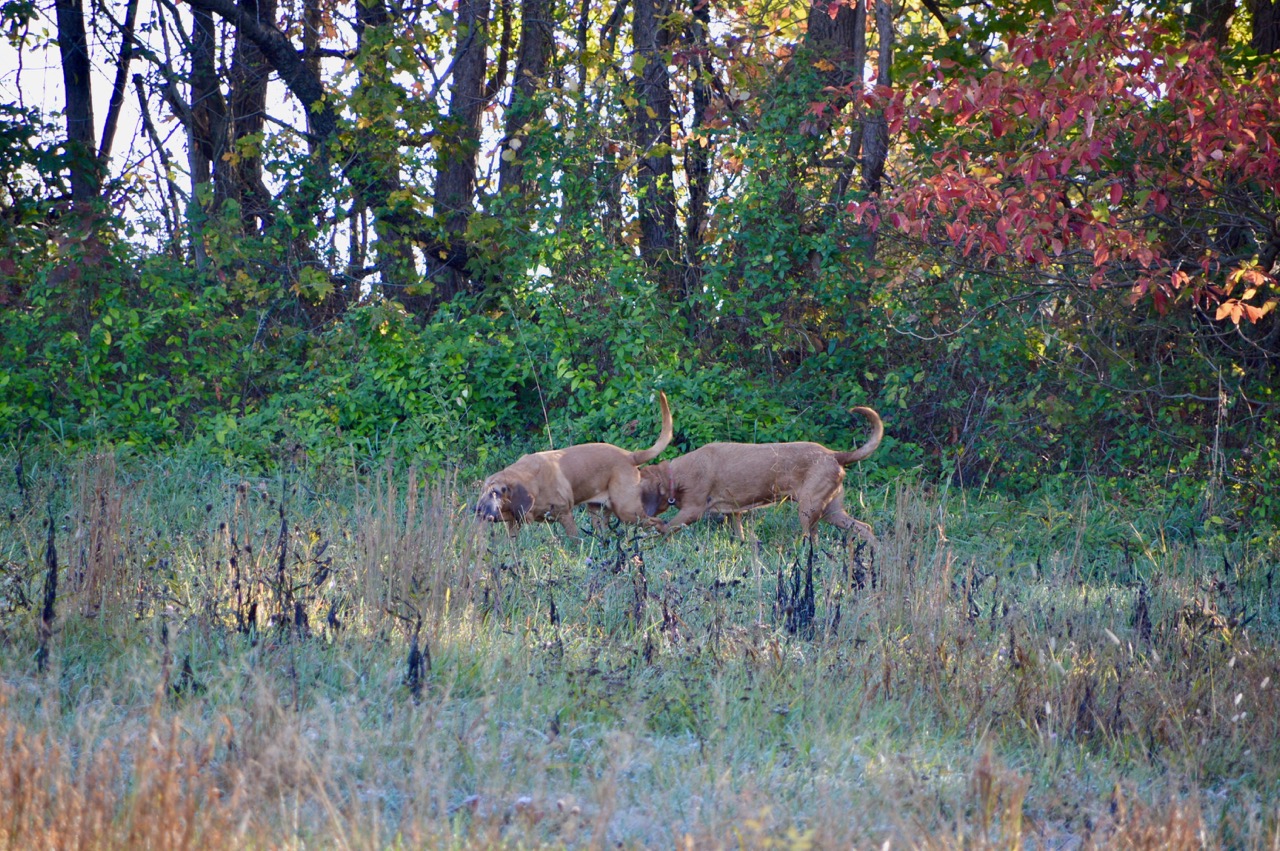 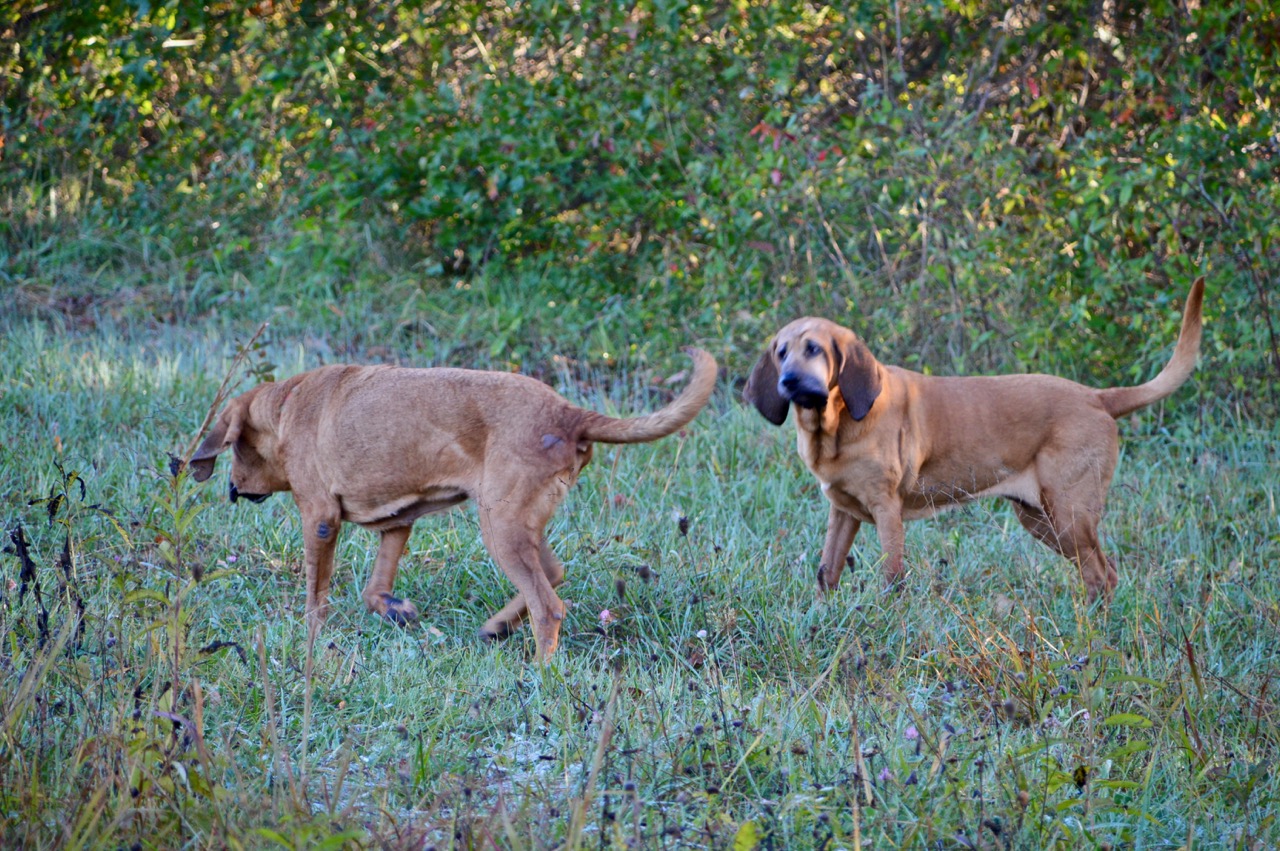 We were back in the 'walking' mode and the chase for potential deer was over. Their pace slowed to a walk, I did not have to jog or run and we were back to a leisure morning stroll in the cold air. Stella's nose and ears were telling her there was still something within reach ... luckily she decided whatever it was it was not important enough to take off running after it. I saw nothing on the north horizon. 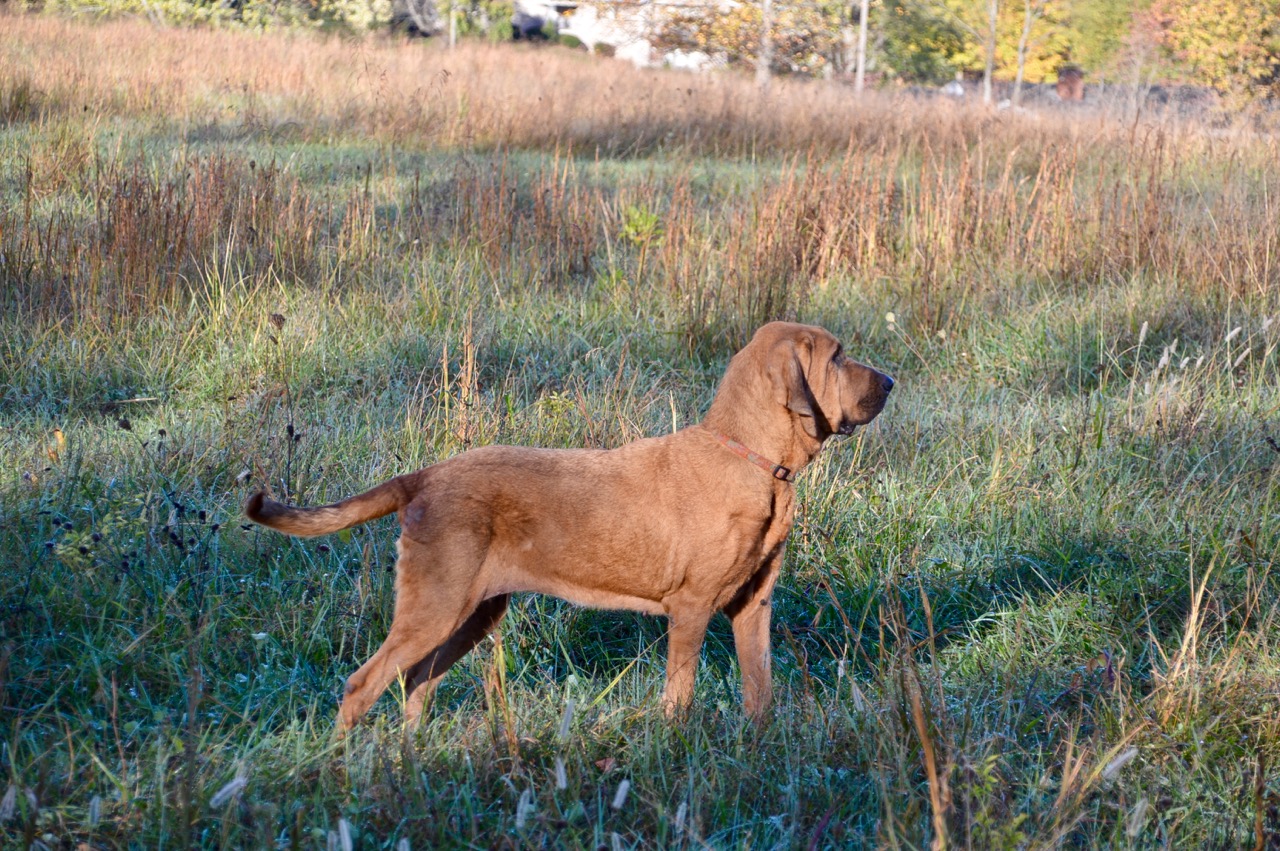 I have declared my Mahogany tree, a series of 3-4 trees making it look as one (red) ... the 2017 Fall Color Champion. I don't see the other trees making a comeback before their leaves fall off. 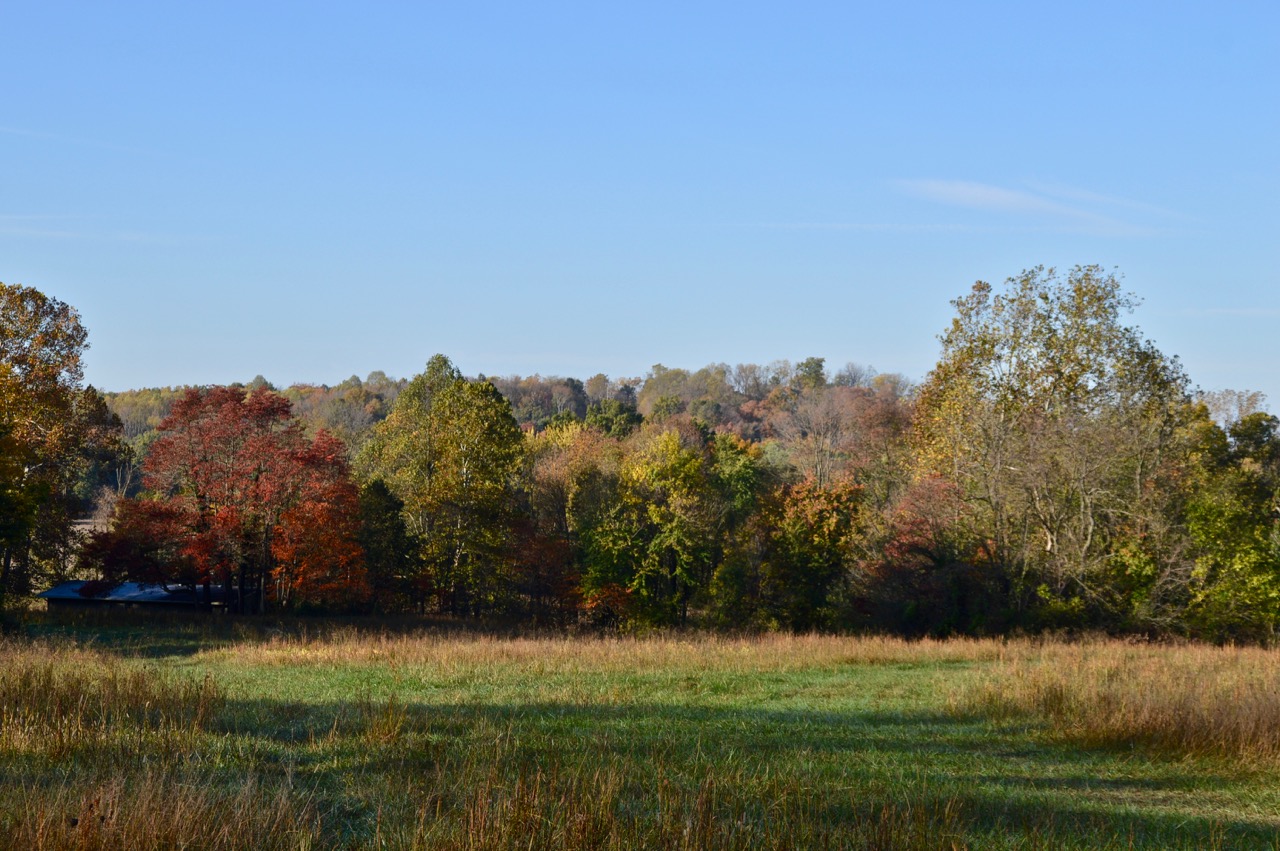 With the excitement of tracking deer scent over it was time to head back home. By the way my face felt I was sure the wet noses of the hounds were cold also. That doesn't even phase them though as they are built for cold freezing weather. 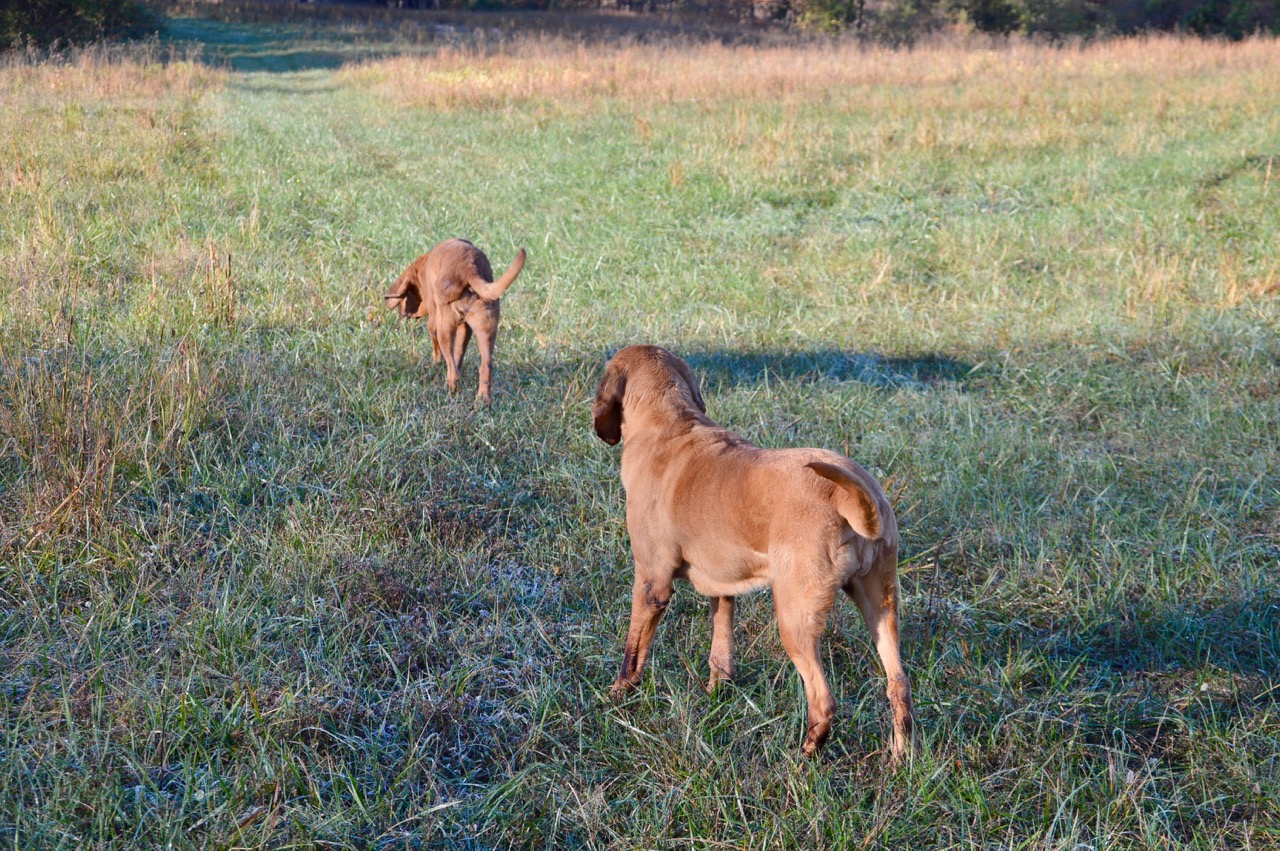 I wasn't sure how my photos of the frost were going to look on the blog as I took them, so I took a few different ones and posted them. 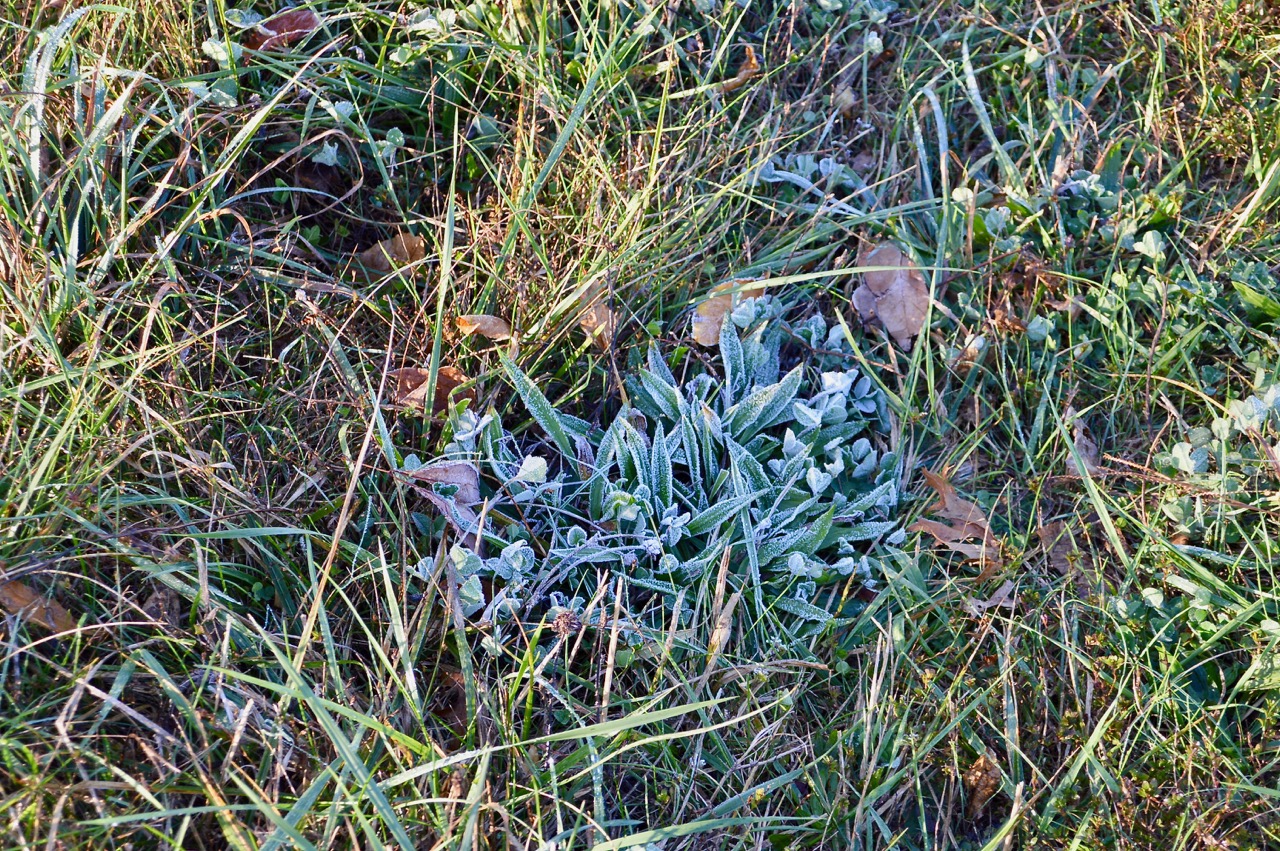 The hounds seem to be making the 'alternate' path the normal morning path back to the house. My Garmin VivoSmart watch tells me there is no difference in distance compared to taking the normal route. 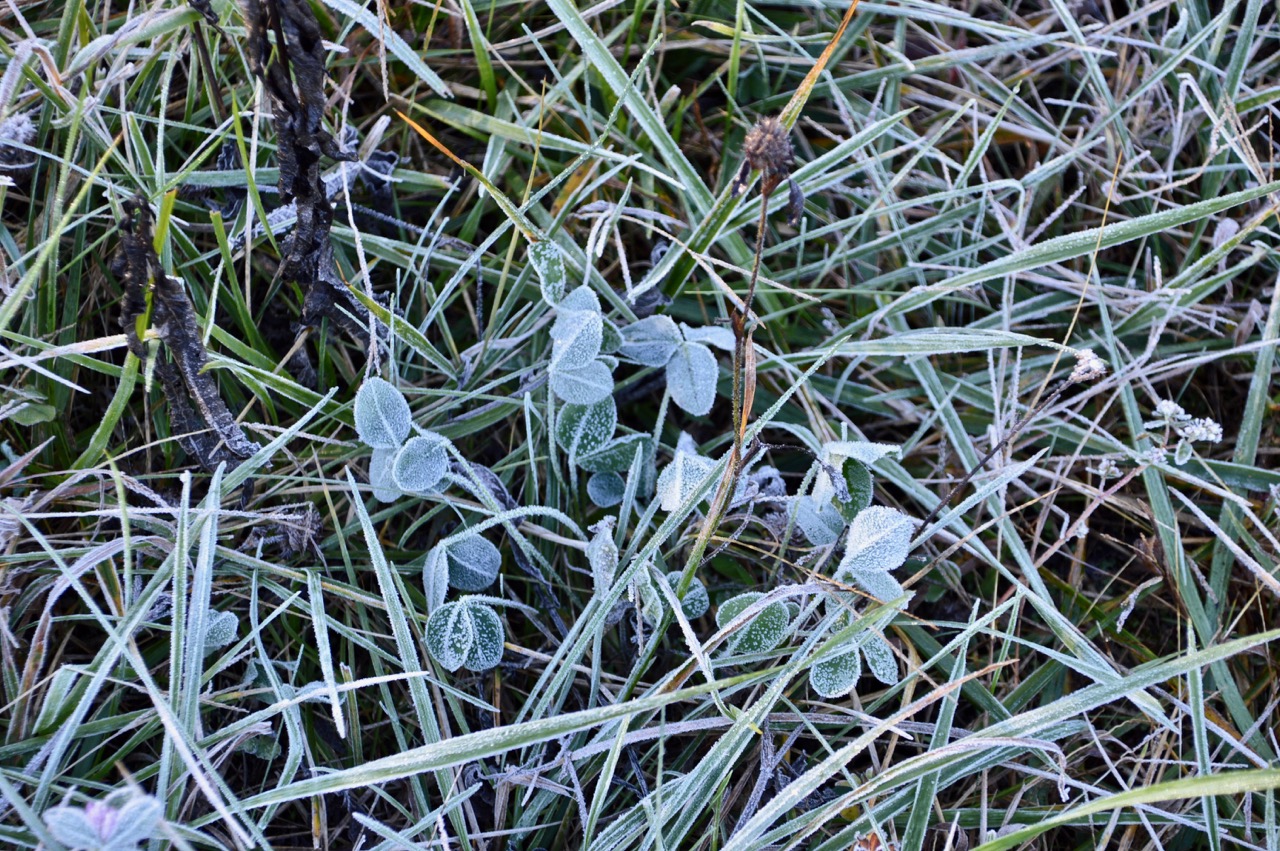 The plan was to mow the yard, mulching the grass and leaves later this afternoon when the temps are above 60°. The front yard grass needs mowing, it's tall enough but this picture made me second guess my decision. I might just rake the small amount of leaves and burn them on the burn pile, leaving the length of the yard as is.

That's the type of tough decisions you have when you are retired and doing nothing. 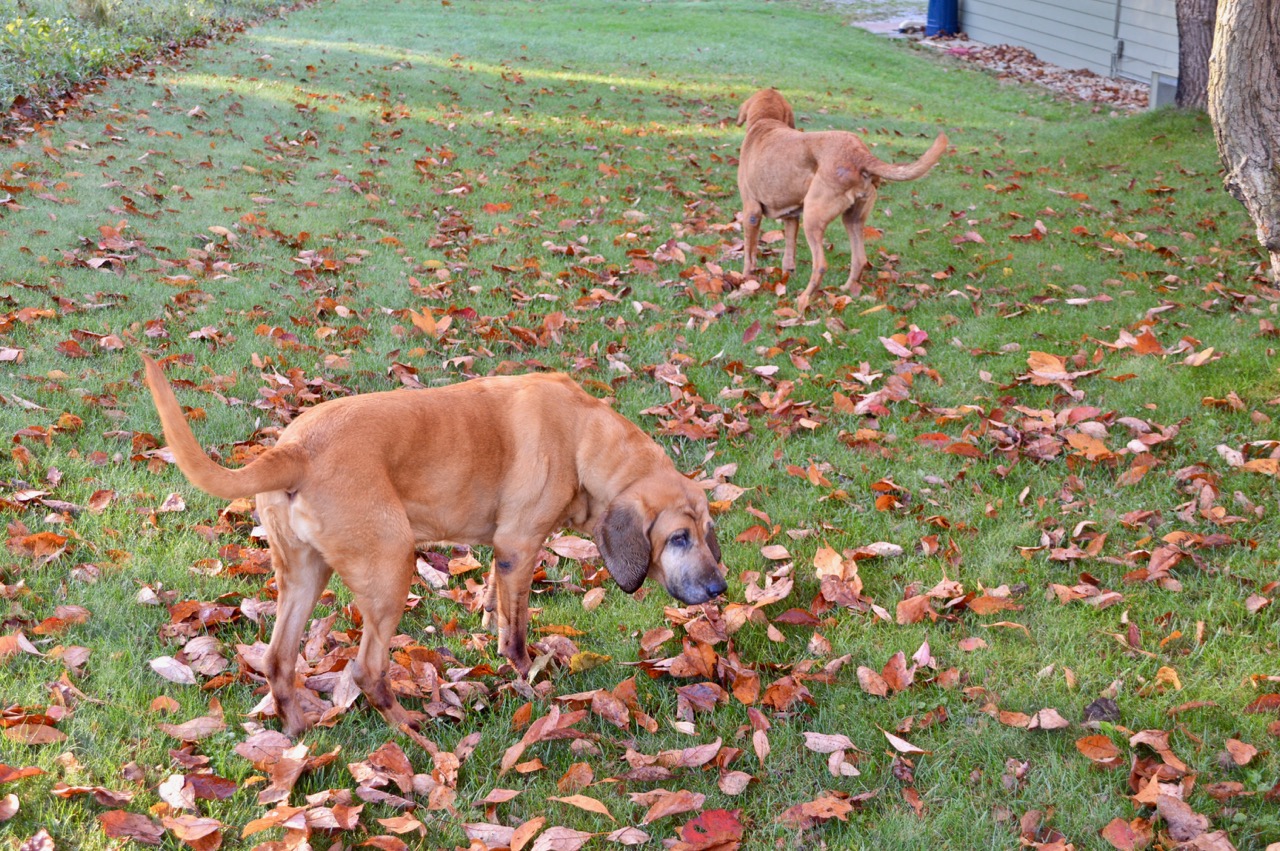 Could be scent from cats, squirrels, rabbits or even that ugly opossum I saw the other night across the highway as I pulled into my driveway. Whatever it was the hounds tracked it right to the end of the walk. 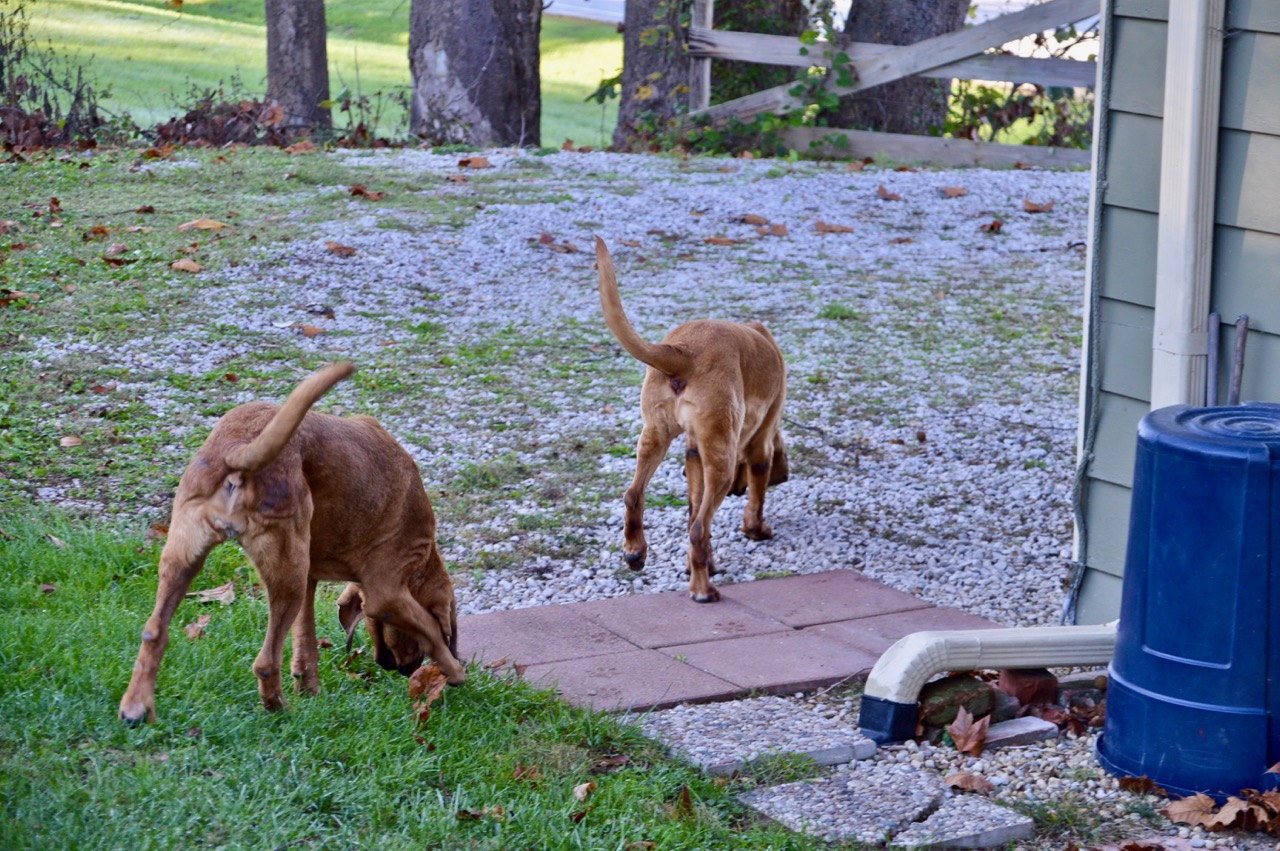 I have had no issues and good results in data use the past two days using Firefox as my browser. For someone that likes changing their mind a lot it's nice to have different browsers, different cars, and different jackets to choose from. My total data use yesterday and last night was less than 500Mb which is good to stay within my 20gigs per month.

The AT&T mail flyer told me they would pay up to $650 for me to switch from Verizon. They would let me upgrade from a iPhone 6s to the new 8's for very little money. I would then have unlimited data for my internet and streaming via DirecTv.

I had seen and heard of AT&T offers like that and already had been told in the past they did not have that service in my area in small town USA ... even with that tower you see photo'd in our walks at times being AT&T. Also, my neighbor told me his AT&T service paid for by his company that he works for, did not work well in this area but works great SW of Lubbock TX.

So I had to call them.

Same results ... they do not service my area with all of that unlimited data on internet, and streaming tv.

I am sure their internet service would never match HughesGen 5 speeds I have. It tested at 47Mbps yesterday afternoon. It's been that fast 99% of the time since I made the change 2.5 years ago.

I've done nothing to the Z4, so I can drive it to the body shop a mile away for an estimate and have them fix the damage I had the last week of September. It's all plastic under the front with a grill and air shields that need to be replaced. I just need to either take the broke pieces off or tape them with duct tap so they can see what the damage is.

A night off from the World Series will give me the chance to watch Stanford at Oregon State at 9pm. I am telling a few friends I am predicting by the end of the season Mike Riley will be fired at Nebraska and will go back home and take the Oregon State job (its open now) for his 3rd different time in his coaching career.

Sadie wants lunch but it's too early, even with her stare down right now. Heidi will come up for air from under her blankets around lunch time. Stella is not ready.

Another good day here in 'the tropics' of Southern Indiana.
at October 26, 2017