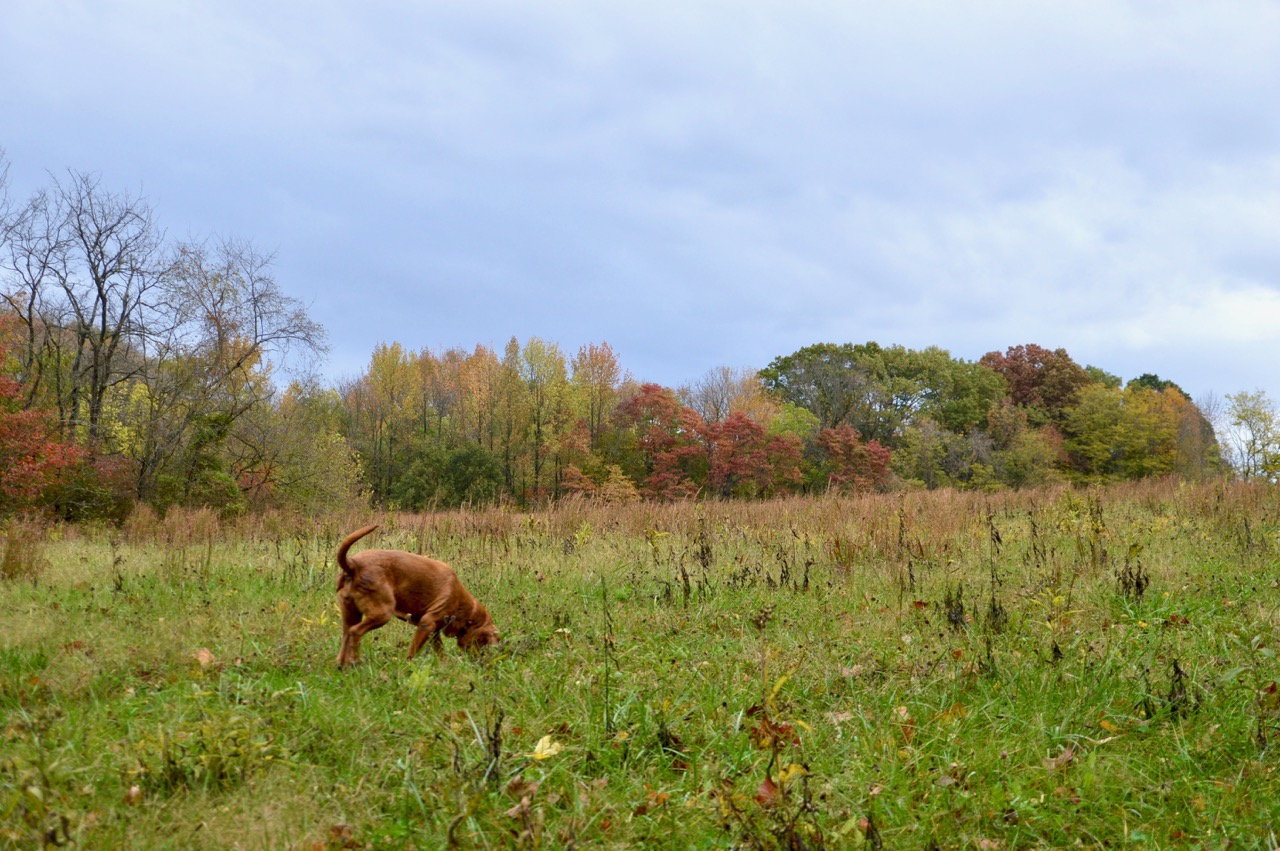 With the storm windows locked down tight for winter weather and all the windows closed, the hounds and I had a solid night of sleep and I could tell my mood was much better this morning than when I heard the salesman knocking on my door yesterday afternoon. It was the coldest morning so far this year as we stepped outside for our first walk of the day.

It might have looked like rain was near but we are not suppose to get anymore until later this afternoon. We should be able to squeeze in a couple of more walks before then, more photos and possibly another blog post tonight.

Hard to say what Sadie was hearing or smelling. She is facing away from the woods towards the neighbors and nowhere in the direction of Stella. 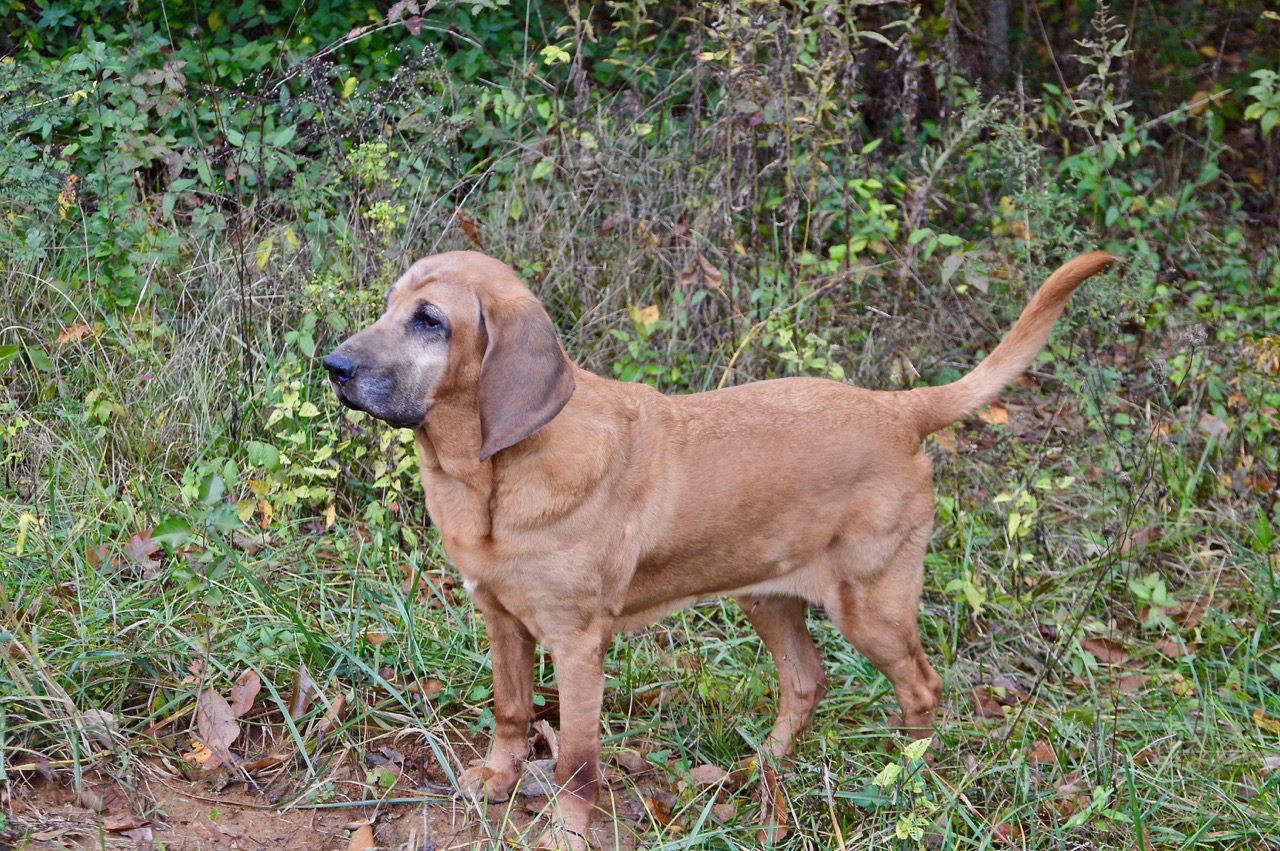 As you can see, Stella was on her own this morning. I had a feeling she wasn't going to go far by the time Sadie and I returned. 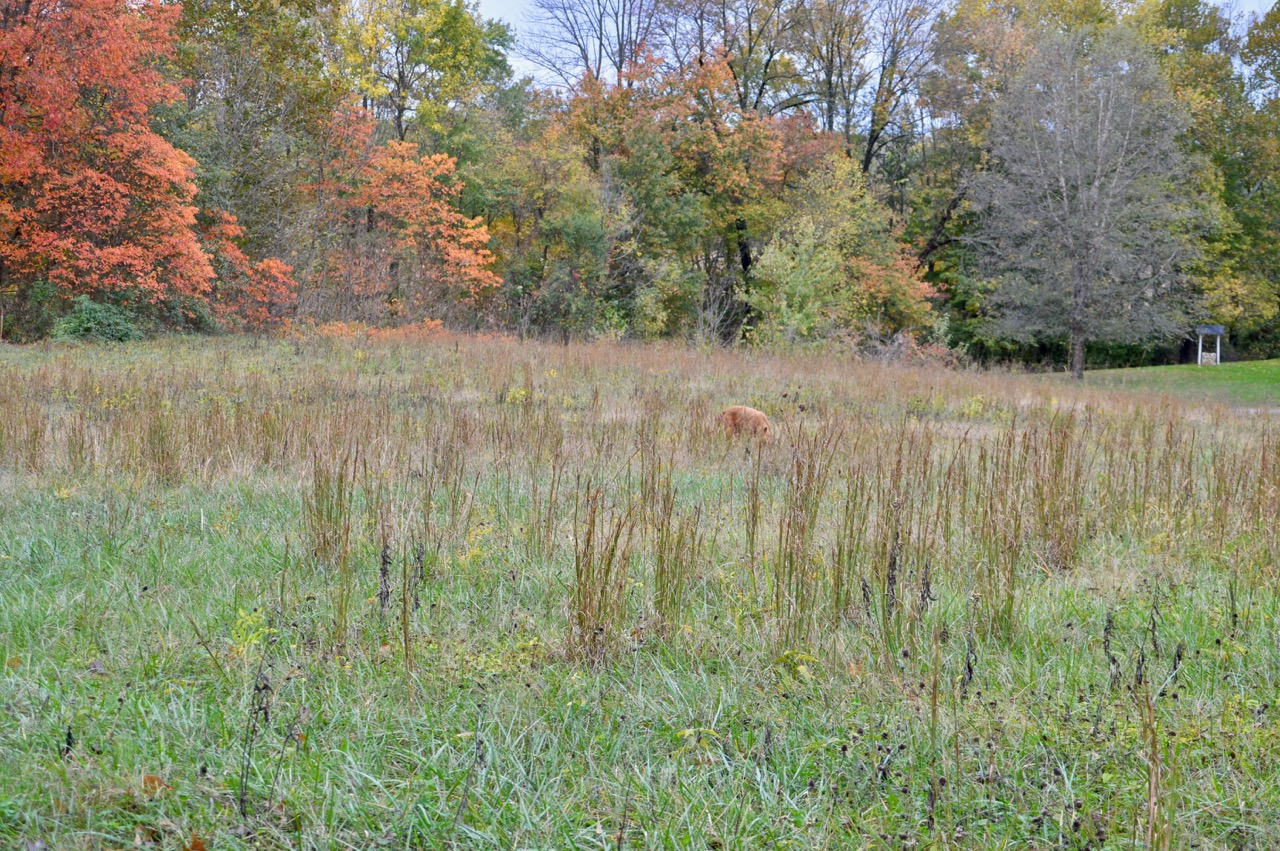 With it 46° and windy, I had a chance to try out a new Carhartt jacket a friend gave me. I can always use a different jacket but have always stuck to my down parkas and other down vests I have. This jacket will save some wear and tear on my other jackets and from the looks of it, it will do well as a hound hair collector and catching flying drool. 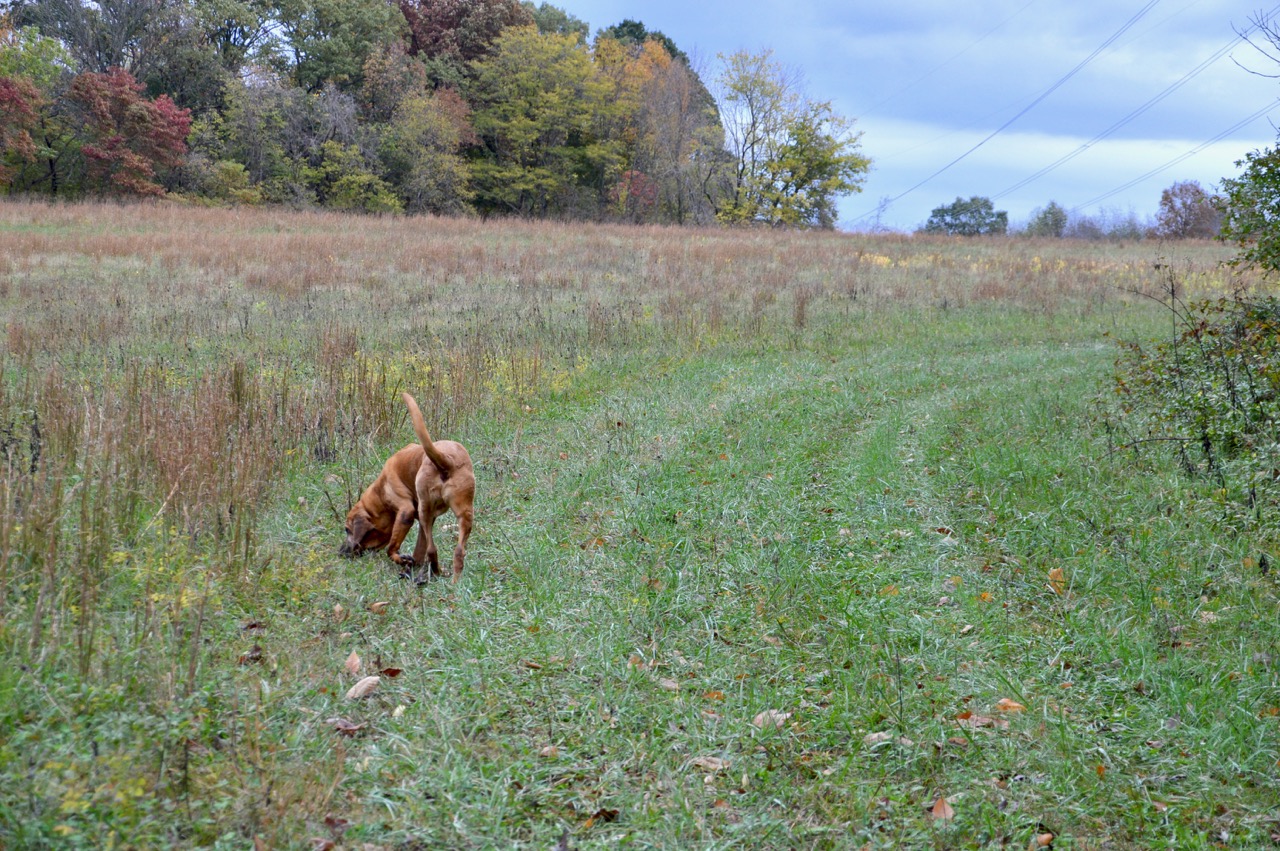 Those skies are to the north of us ... looks almost like a snow storm is up there. I still have not done any weather research on what the winter predictions are for this area. I have a gut feeling we will not be having a mild winter this year. 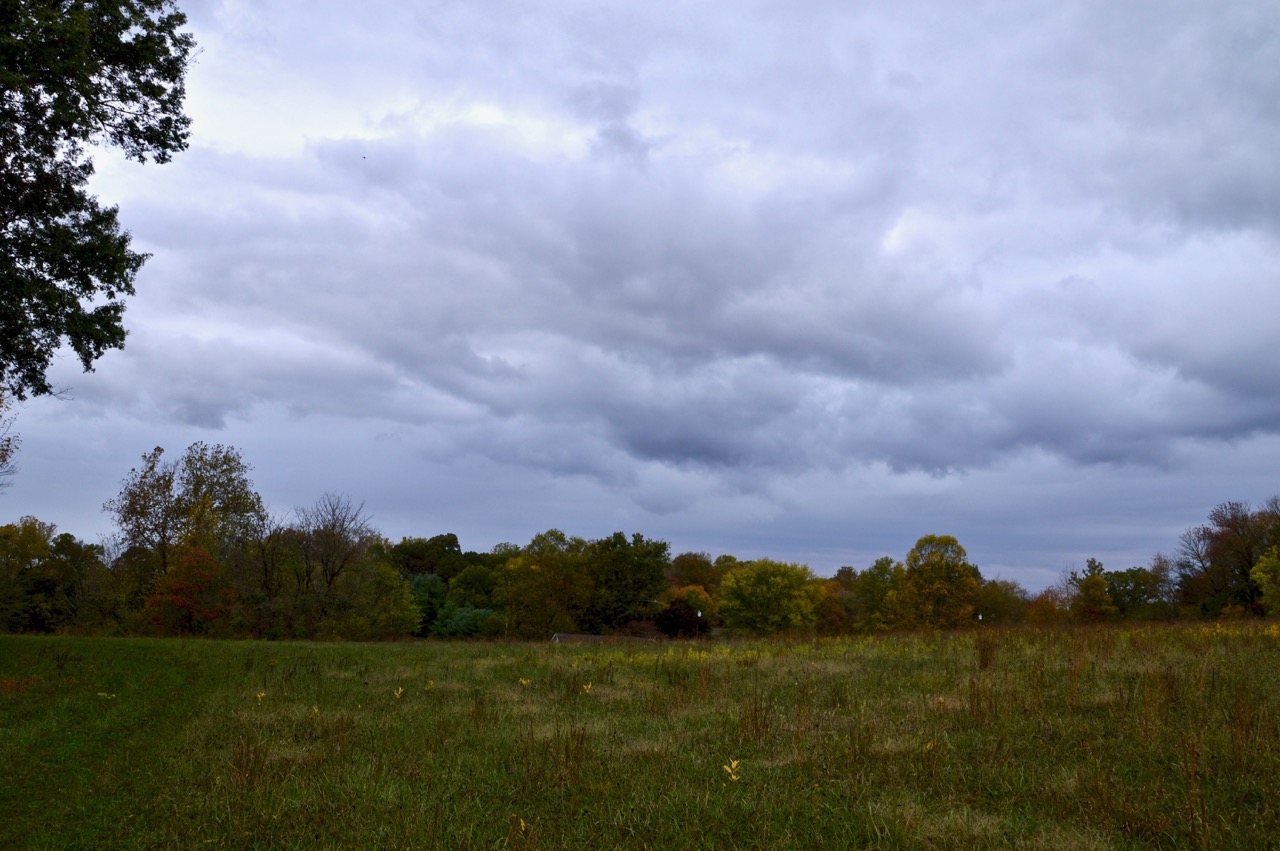 Sadie found out today as well as me ... what happens when you are eating dirt but due to all the rain it was really mud. I noticed once on the walk she placed her mouth on the ground and scratched with her paw. When she did that frantically back inside the house I decided to take a look.

All of that mud was caked up in her upper gums ... I cleaned that out in one step with a rag then brushed her teeth with some dog toothpaste and a toothbrush. I was shocked she let me do that ... but she seemed to like the result. 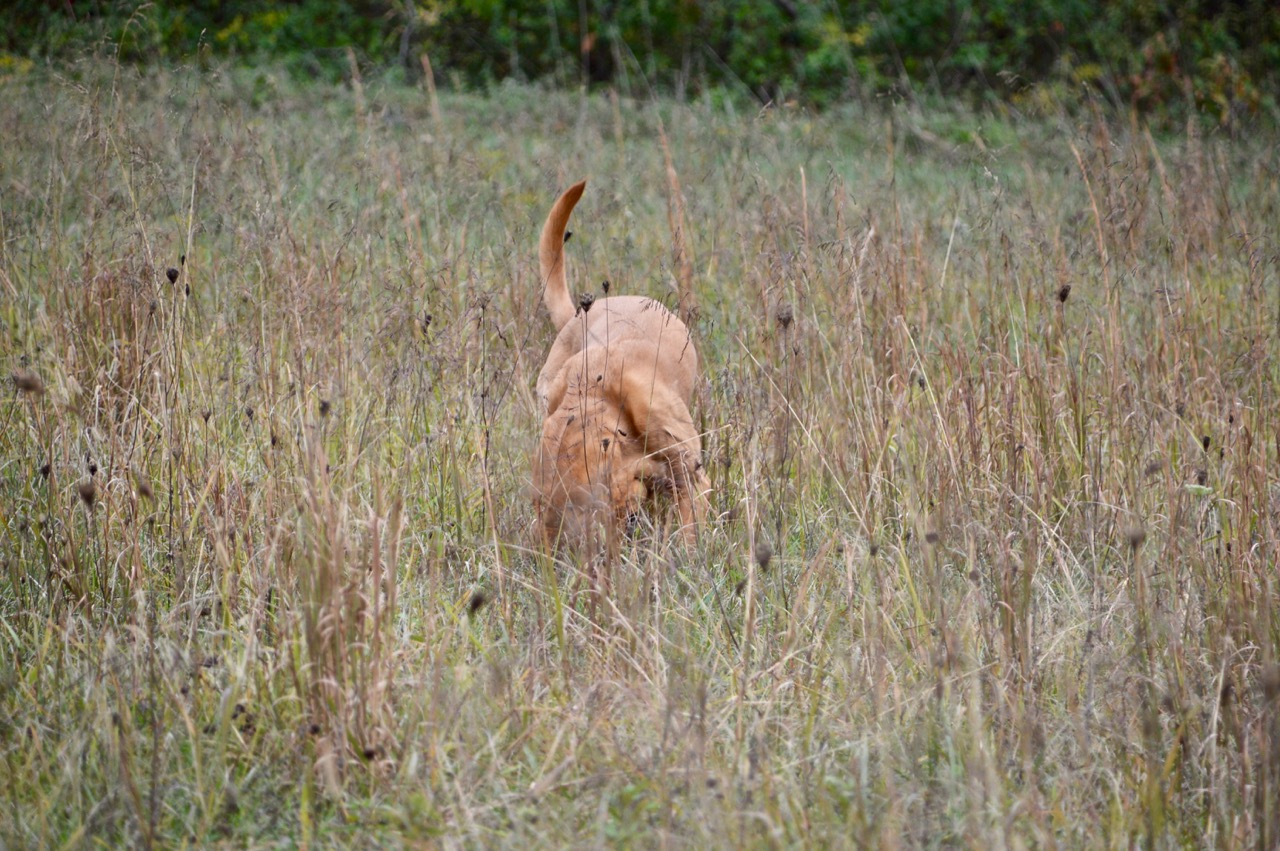 She never lets me get too far ahead of her, so once she saw I was not stopping my walk this morning she knew she had to run to catch up. After all she can't give Stella the chance to drink her water when we get back inside the house. 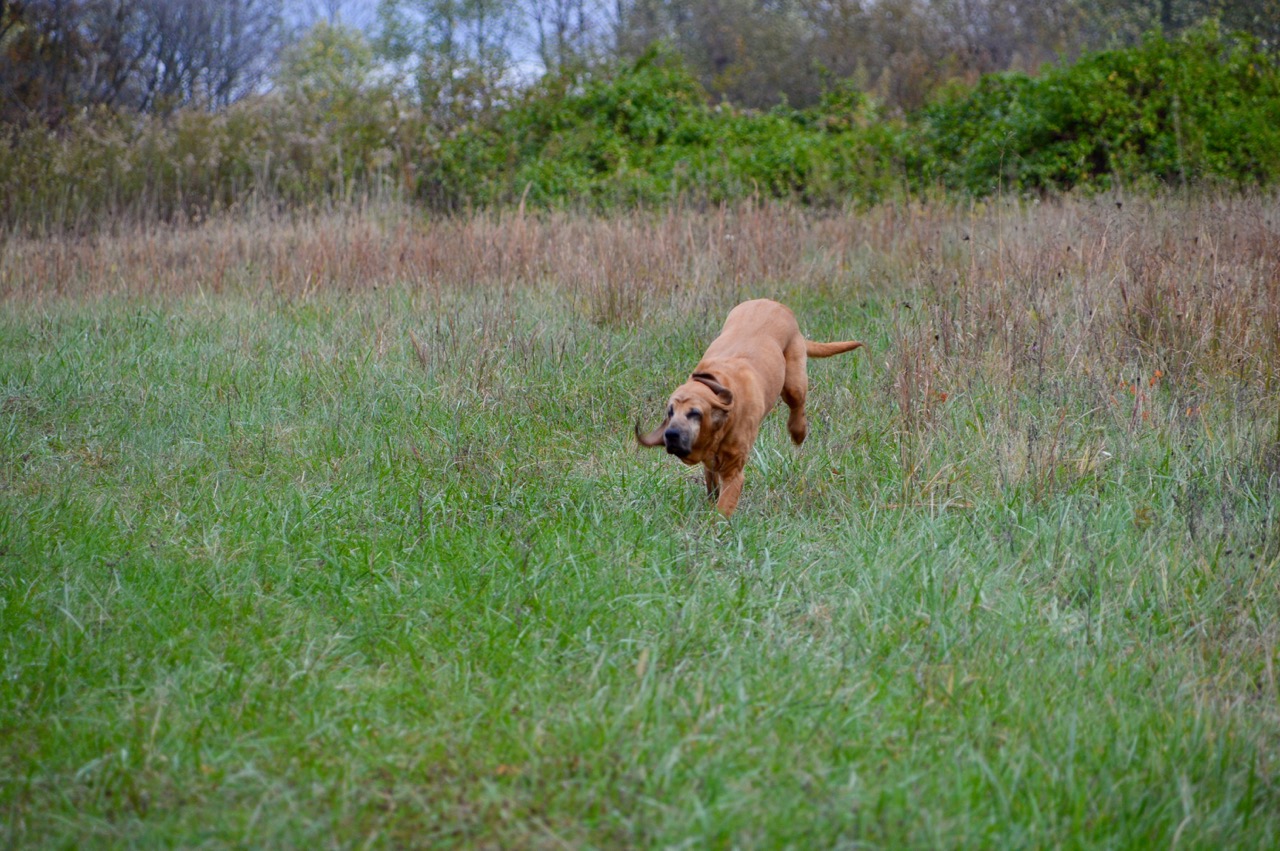 Poor camera work by the photographer but I think you can still see her ears flapping through the blurriness. 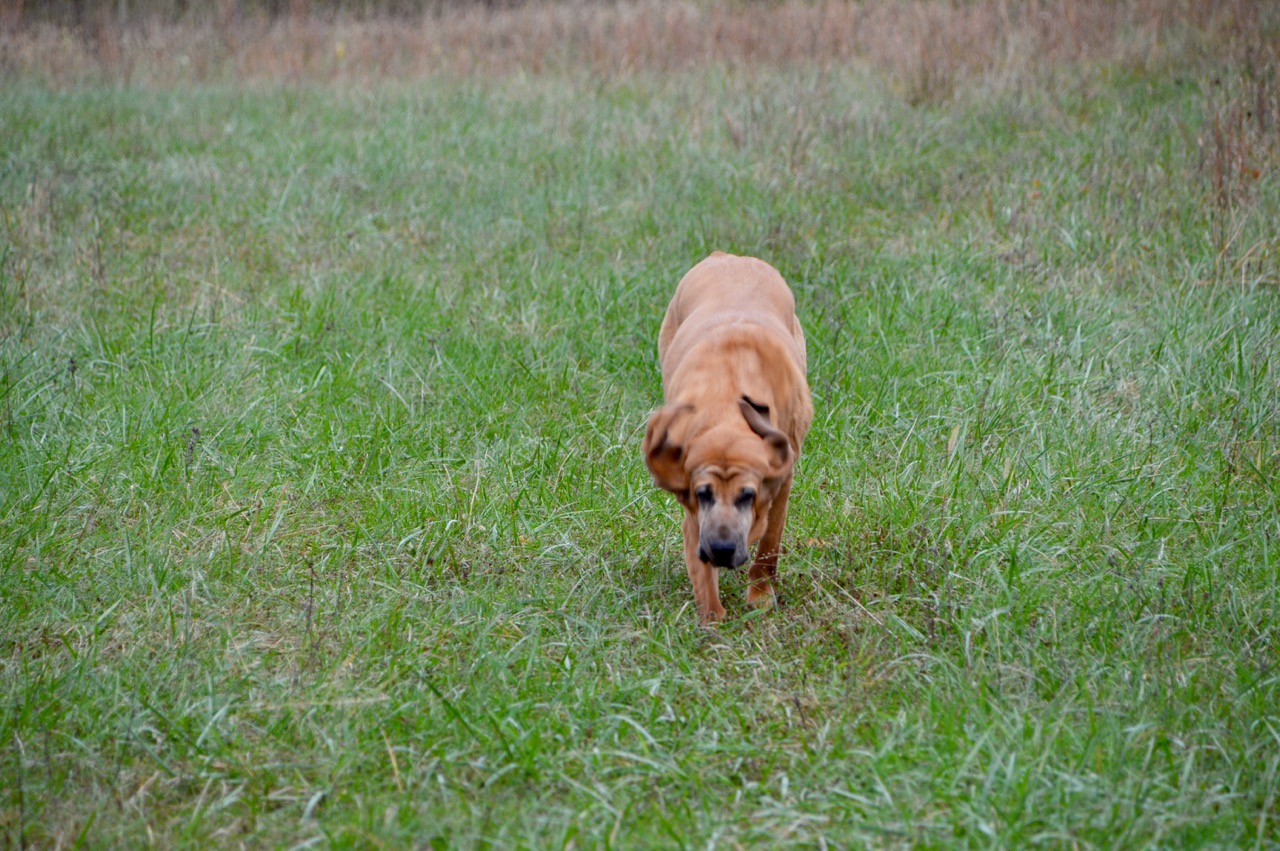 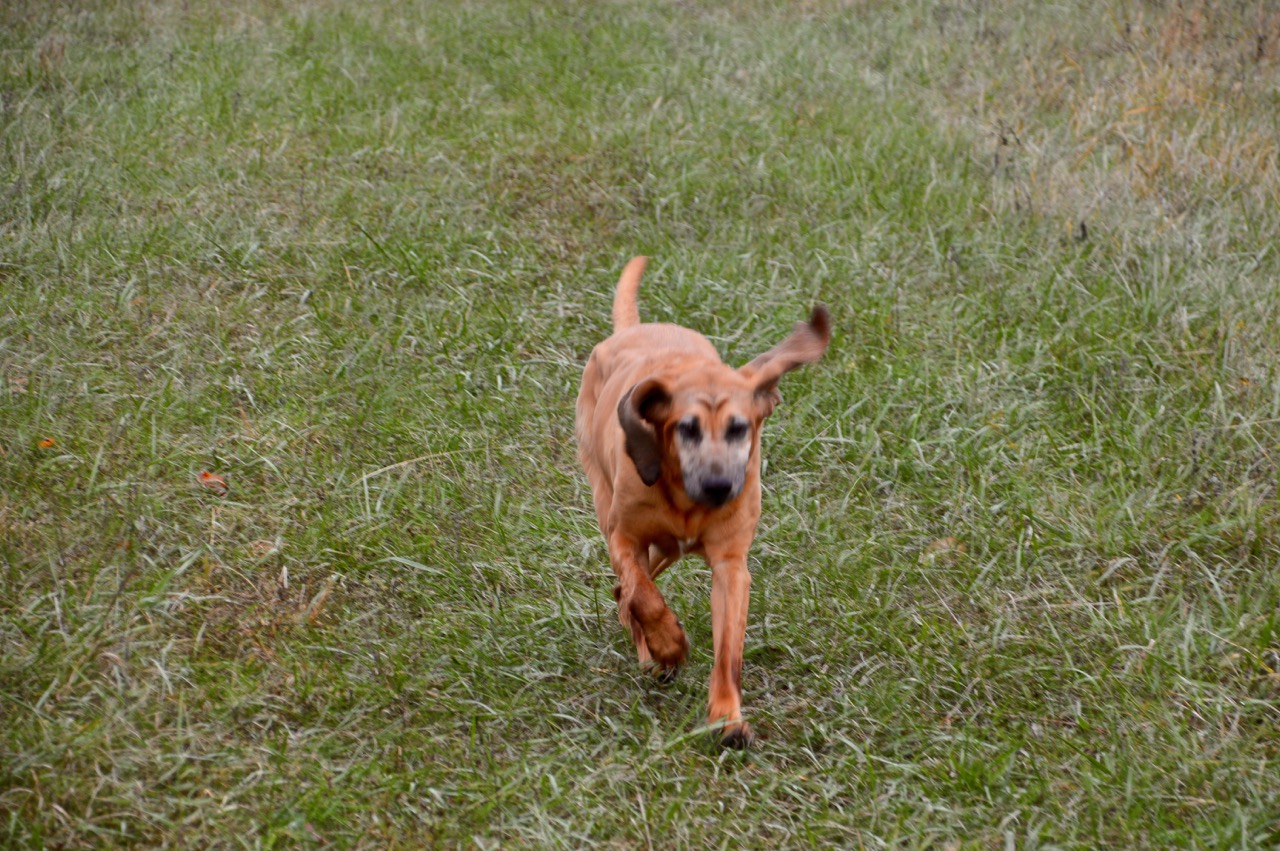 As usual as we approached the lower part of the field near the house, Sadie stood and surveyed the area with her nose and ears trying to find where Stella was. 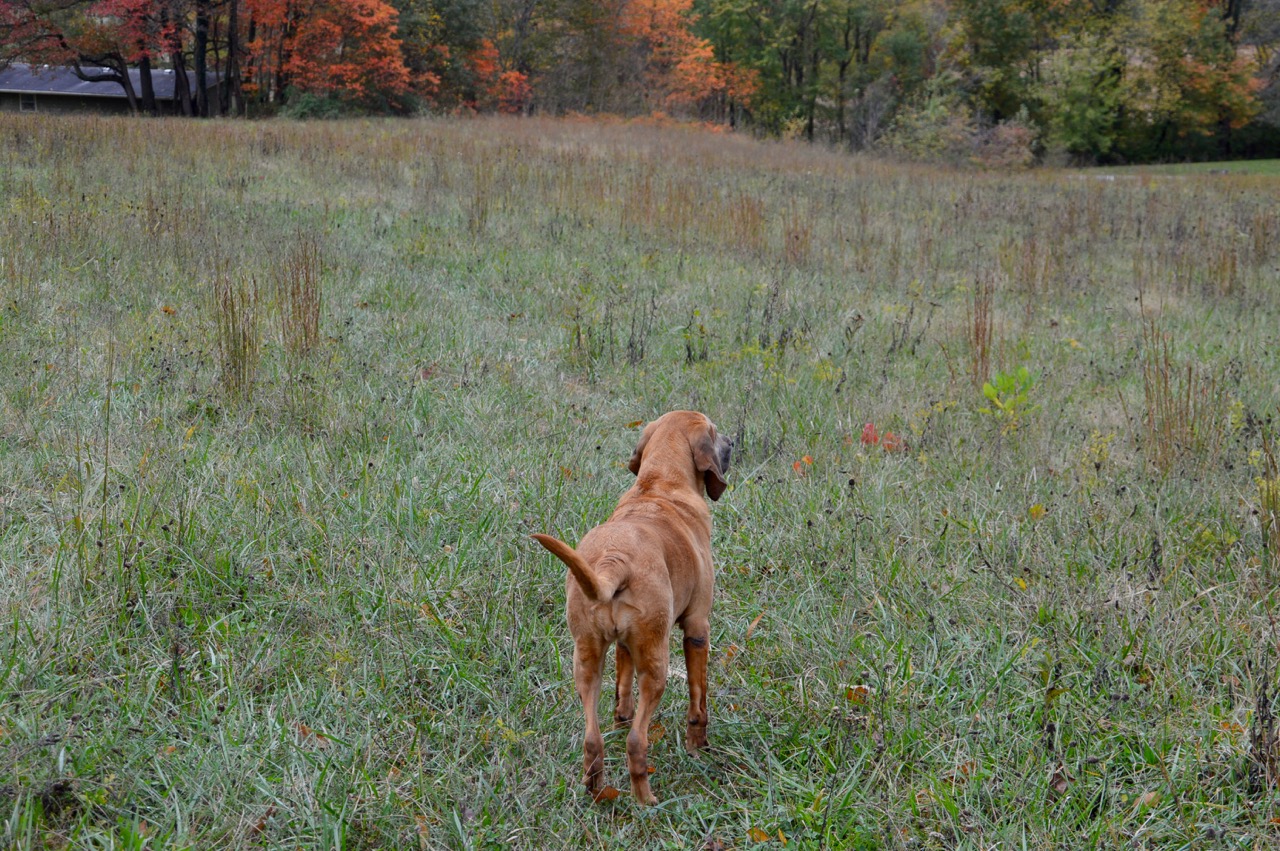 When I told her to "go get Stella" off she went. You can barely see Stella off to the left up toward the house. 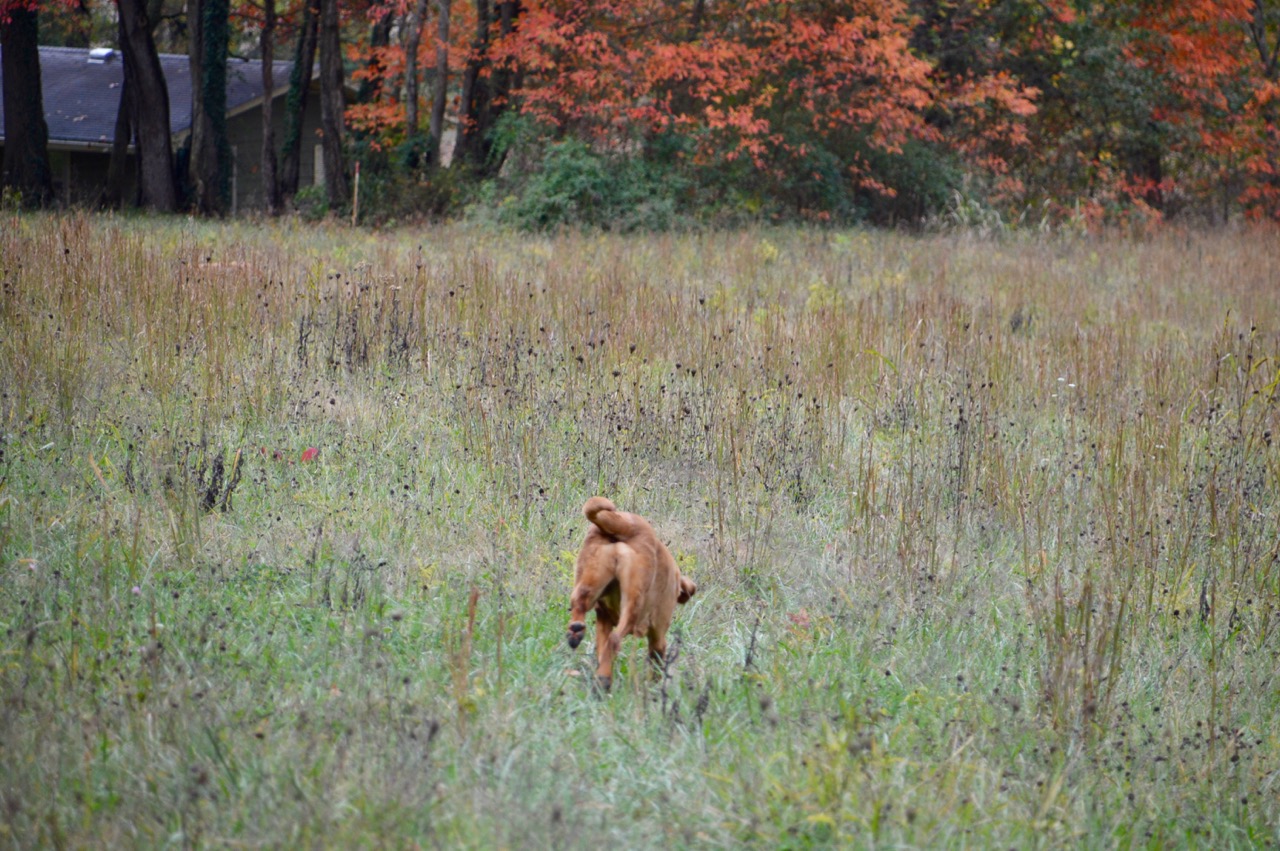 But bloodhounds get distracted easy when there is a strong scent picked up. I ended up getting to Stella before Sadie did, since she was no longer interested in finding her.

I guess the leaves are going to start showing their colors this year ... the trees seem to change every 24 hours and there are a lot of leaves left for a colorful fall season.

That is the most skin I have ever seen fall over Stella's eyes. 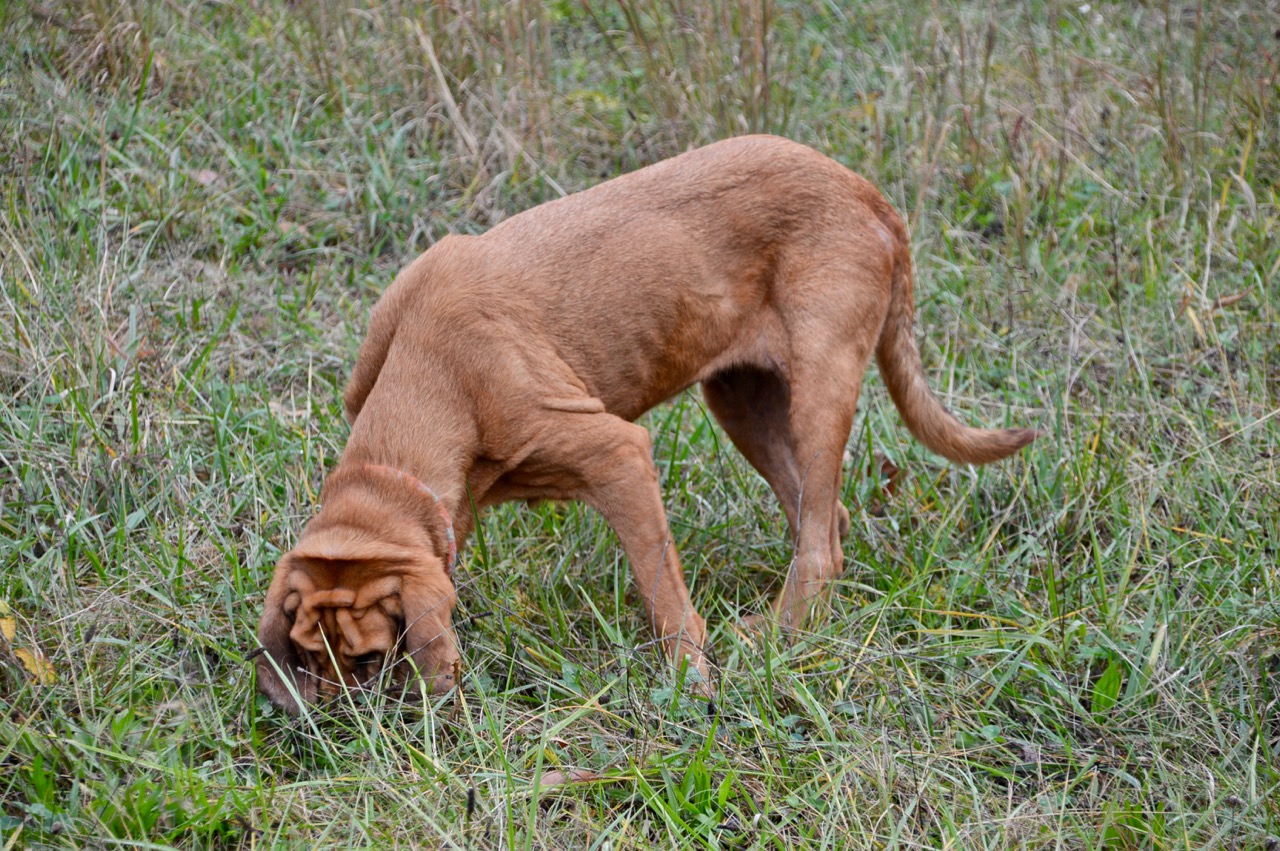 You might think from the wrinkles on Stella's forehead she is either in deep thought or stressed out. I just think that gravity is stronger this morning when it comes to her extra skin. 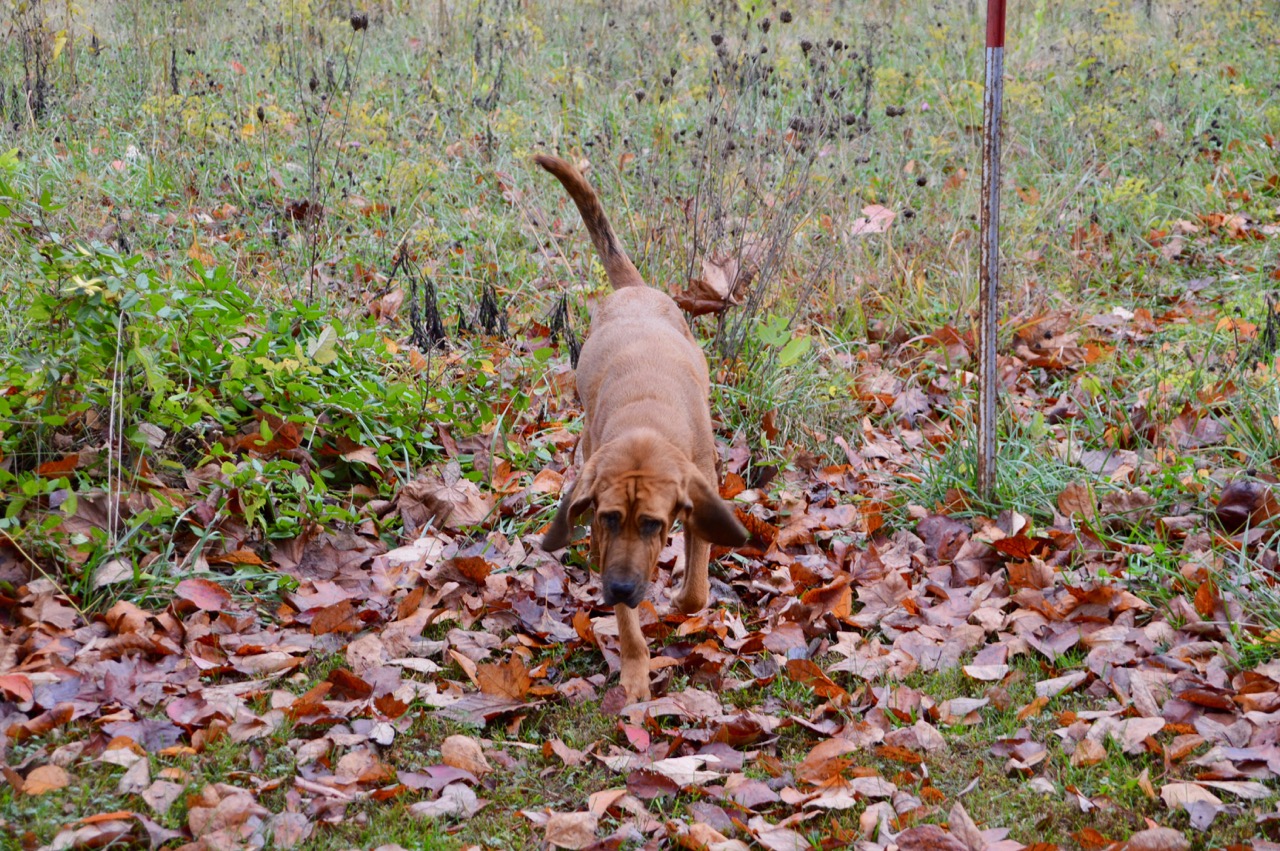 Well will be tuned into the first World Series game tonight. For some reason Los Angeles is having higher than normal temperatures. By game time they are expecting it to be in the high 90's, no retractable roof and no air conditioning like they have at Houston stadium. The starting time is great for baseball fans east of the Mississippi River but right at the start of rush hour traffic in LA.
I came back to Google Chrome this morning. For some reason while looking through my updated blog list and reading different ones, I glanced over at my Activity Monitor when I was shutting down Safari and saw in the short time I had been online, 248Mb of data was used. That is way too much for what I was doing.
I'll compare that to what I do here in the next hour or two. It might be the new update to macOS, but for some reason my Google Data Saver is no longer working. I deleted the app and reinstalled it but so far nothing is showing up. With the computer's Activity Monitor I will still be able to see how much data Chrome is using after I visit the same websites as this morning.
Heidi made it outside about 4pm yesterday. She didn't stay out too long, just long enough for what she needed. Then she trotted fast back from the front yard to the door. With temperatures even colder today it will be hard to get her to do much outside. She might move from her bed to the couch but not much else besides eating lunch. I hope to get some photos of her at our lunch break.
I am not ready for winter here in 'the tropics' of Southern Indiana.
at October 24, 2017