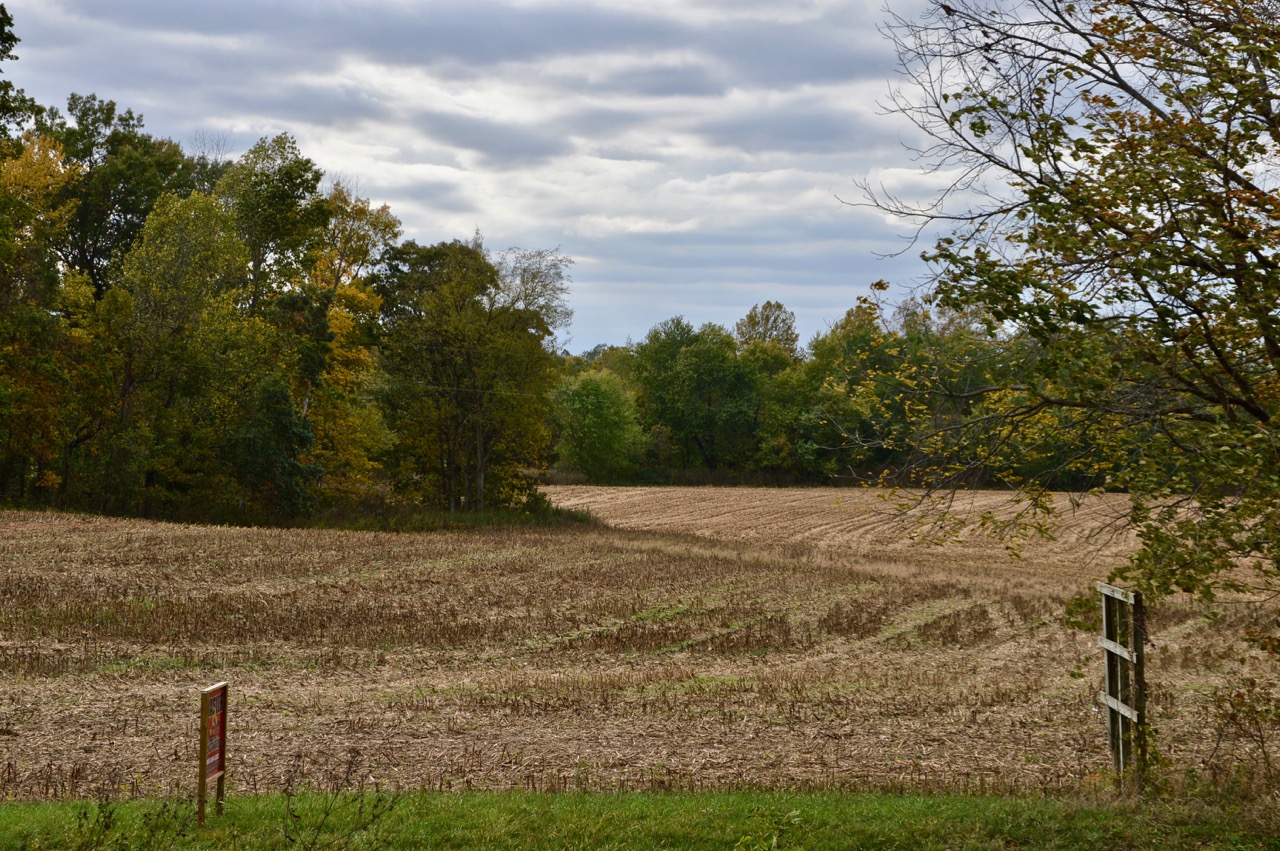 The thing about being single and retired, you can pretty much do what you want when you want. All three hounds are very adaptable so they slide with any schedule changes without howling or barking. Then never miss their two meals per day nor there 2 walks per day at a minimum ... unless it's a downpour of rain. We always take walks in snow or ice. Yet today was much different.

Normally this would have been a type of schedule where I would binge watch my two favorite tv shows that are no longer active. In this case it was college football, not having enough tv's, and a Directv DVR that will only record two programs at a time. Those two recordings lock me into those two channels and I can't have that while trying to watch multiple football games and a MLB Playoff game. So I recorded only one game that was later shoved to the side by my recording manager priority list to record the show Dr. Jeff - The Rocky Mountain Vet. 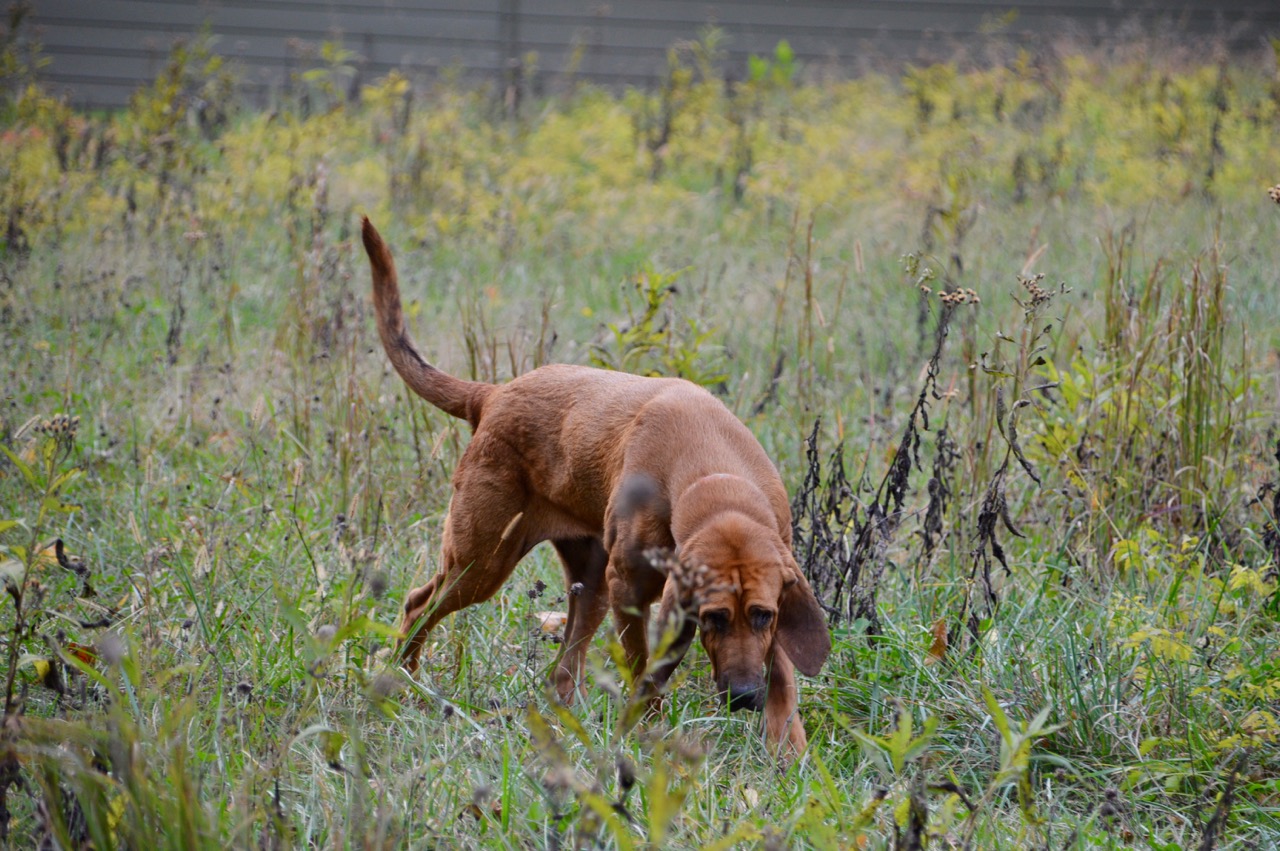 By the time I finished watching the last 'live' college football game out in rainy Pullman WA it was somewhere in the 2am range. I was wide awake. At that time some of the sports networks were already showing replays of earlier games that I couldn't tape or missed while watching another. As you can tell time kept on moving and before I knew it ... daybreak was showing itself outside my windows. 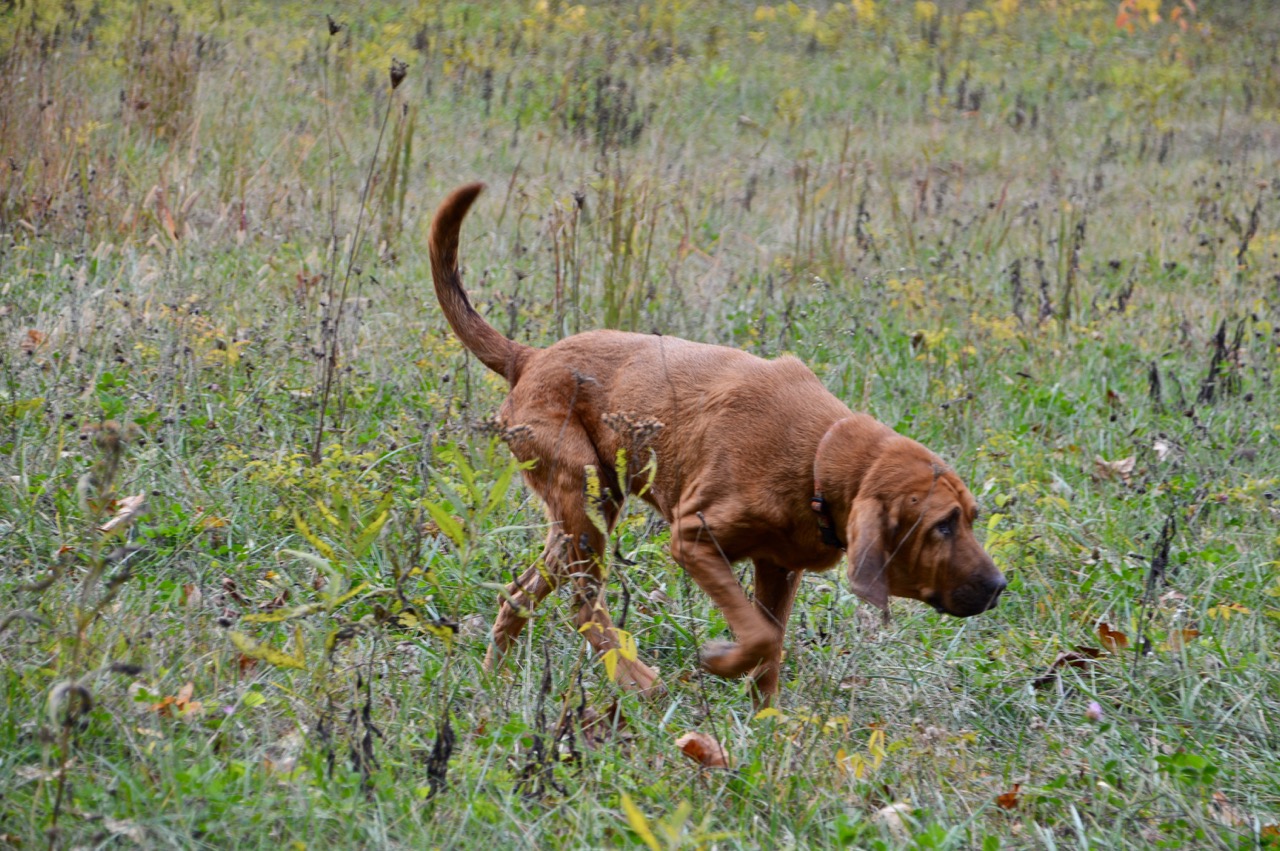 So the hounds were fed their breakfast about 30 minutes earlier than normal since I was still up. Yet, their lunch was a couple of hours past their normal time. We didn't take our first walk of the day until after 4pm but that didn't matter to them. They had been fed twice, had their normal daytime naps and still had plenty of time for a 2nd walk before sunset and after this post. 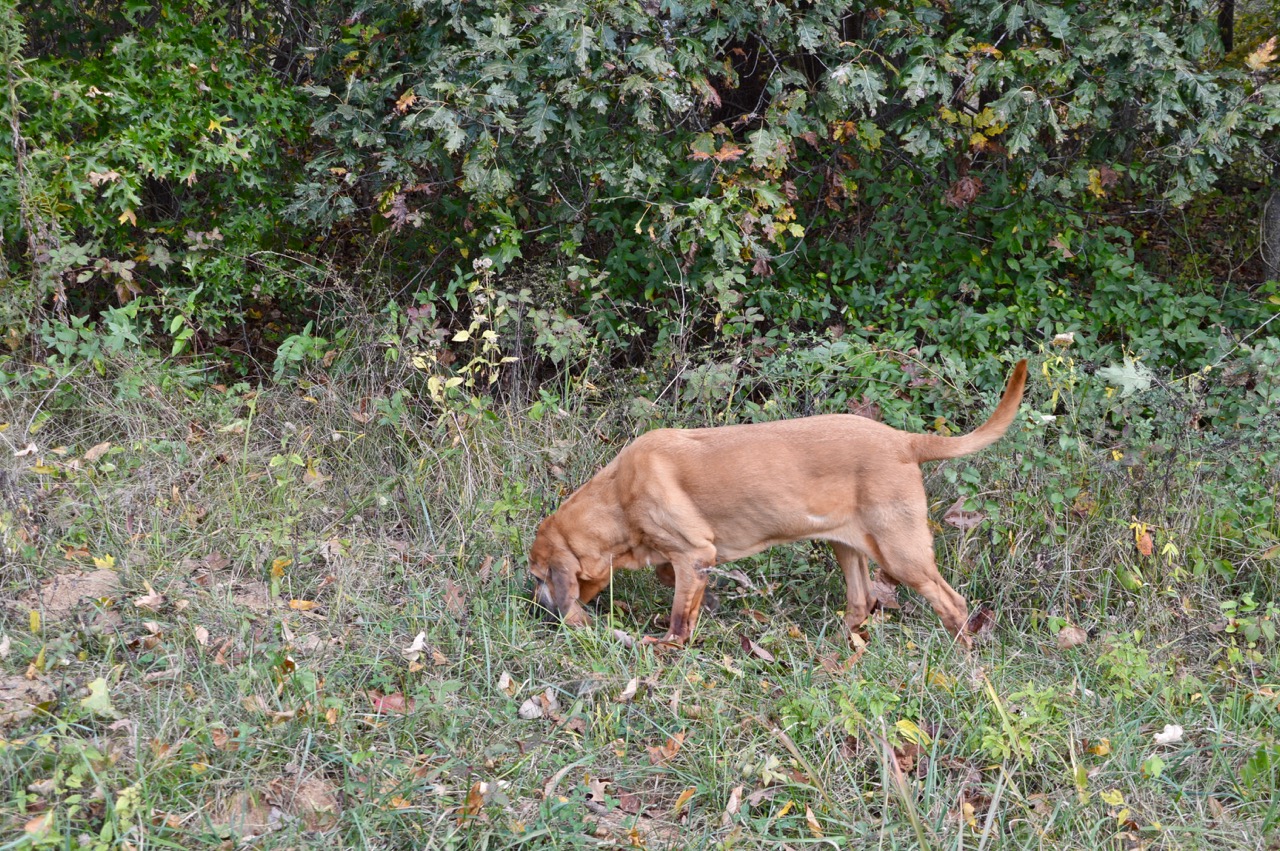 Sadie and Stella headed opposite directions. Sadie took her normal path doing what she does best .. tracking scent. Stella slowly moved from spot to spot in what I call the 'lower field' closer to home. Either I was still to tired after watching college football games until 7am, a total of 19 straight hours ... or it just seemed right to let Stella do whatever she wanted today. 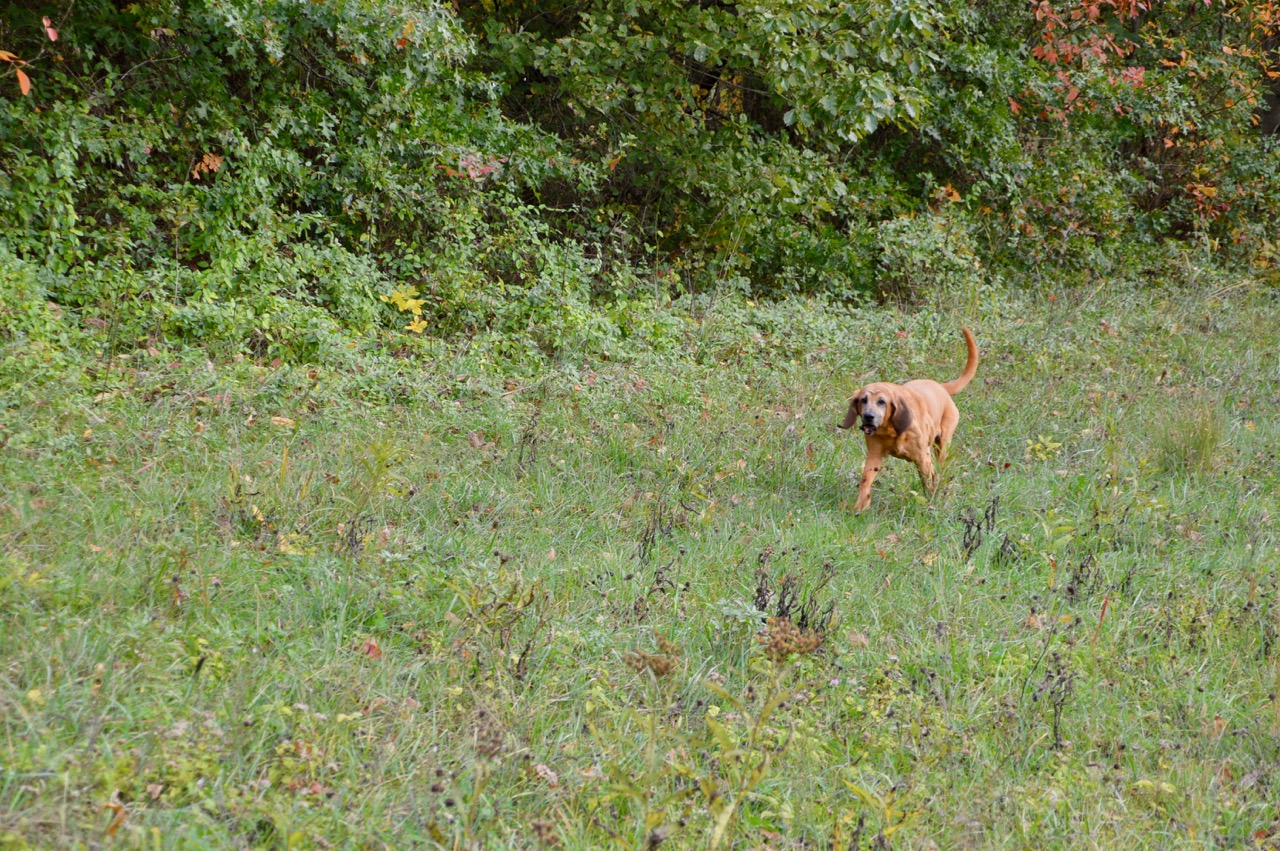 Sadie and I were walking along the back edge of the field before we knew it. It was nice to be walking on dry land without wearing the North Face snow boots to keep my feet dry from heavy morning dew. As I glanced around the horizon it looked like a strong effort by the trees to show some color changes that were brighter than just 24 hours prior. 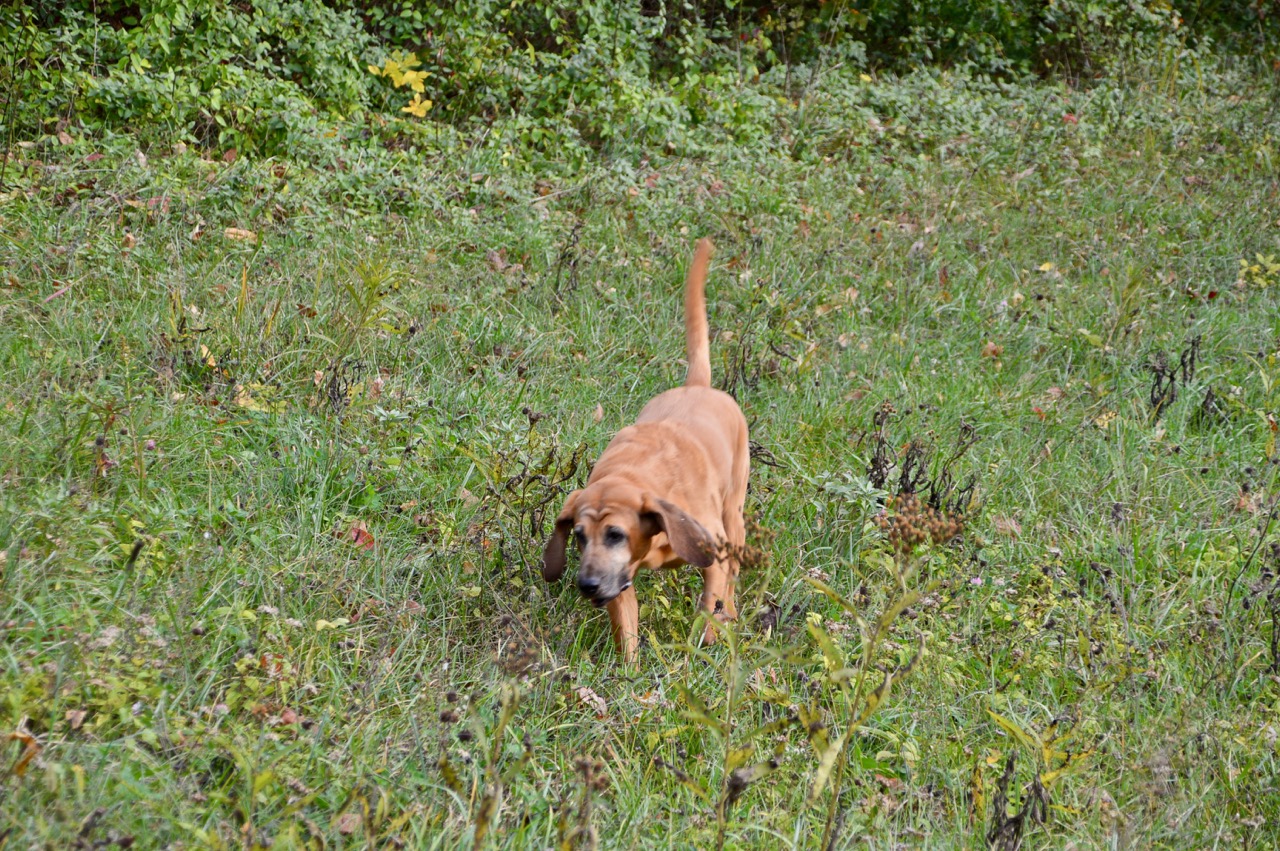 The yellows seemed to be trying to show their color in the north. 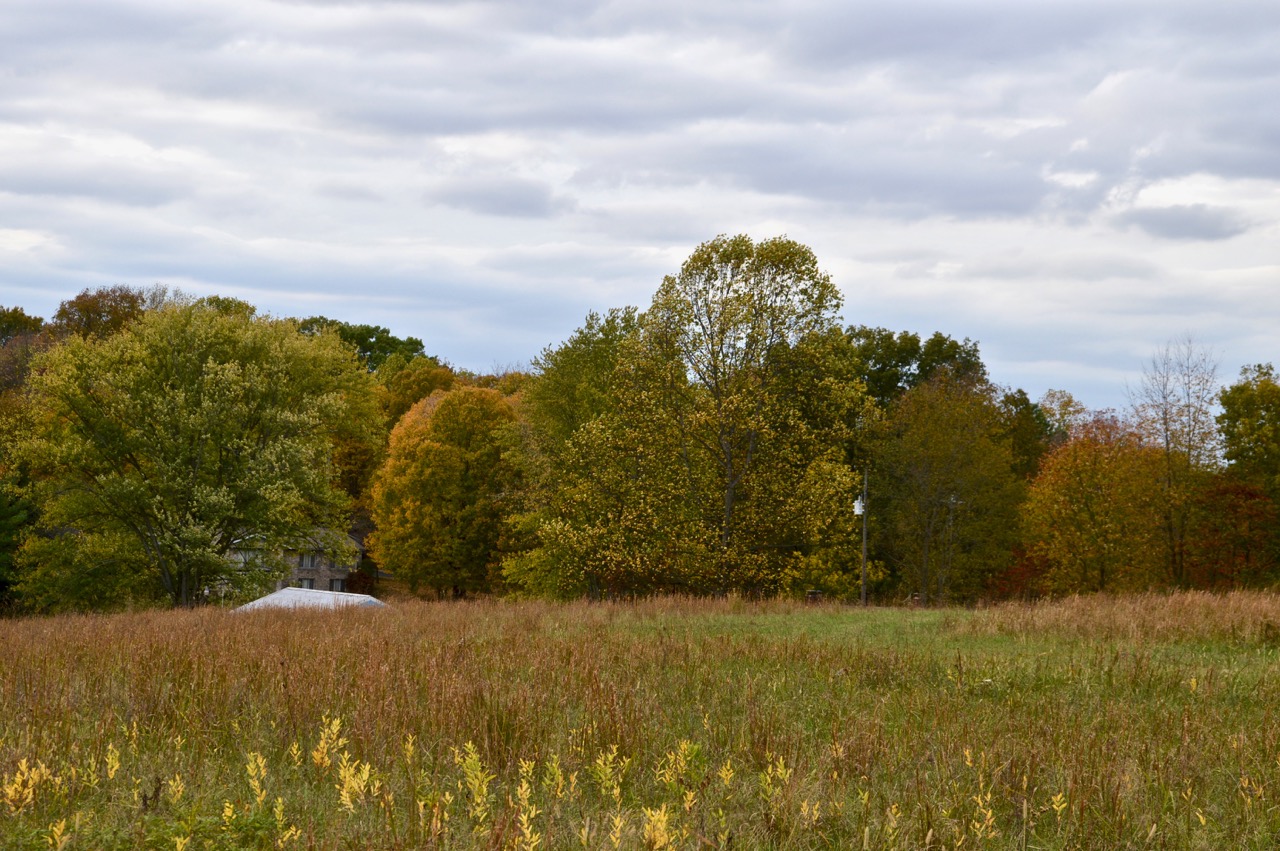 While the oranges were in the Southwest. 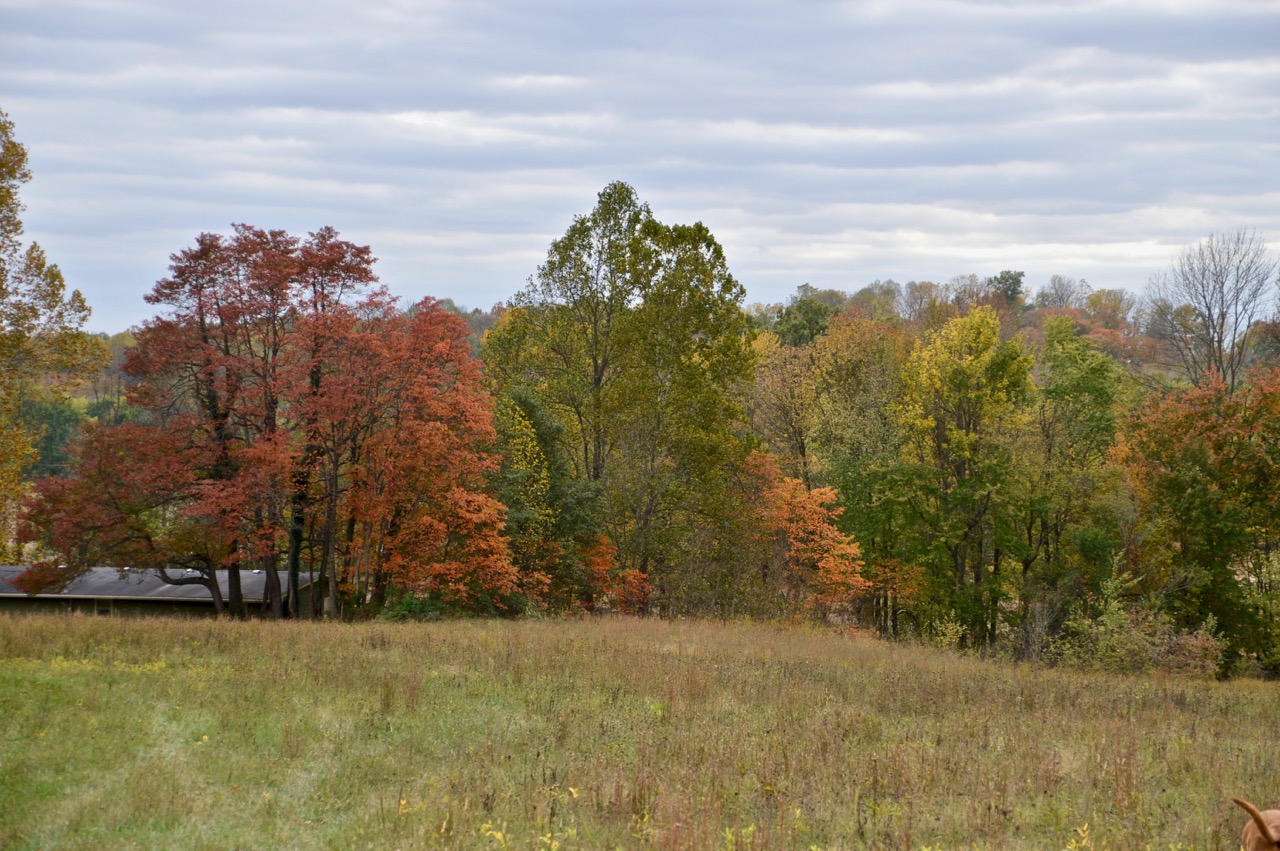 While looking at the trees and trying to decide what to take a photo of I did not see Stella anywhere in the field. With the color of her coat she blends in well with the dead dried out taller hay. Without saying a word, Sadie decided it was time to find Stella on her own and took off in a direction she thought Stella would be. 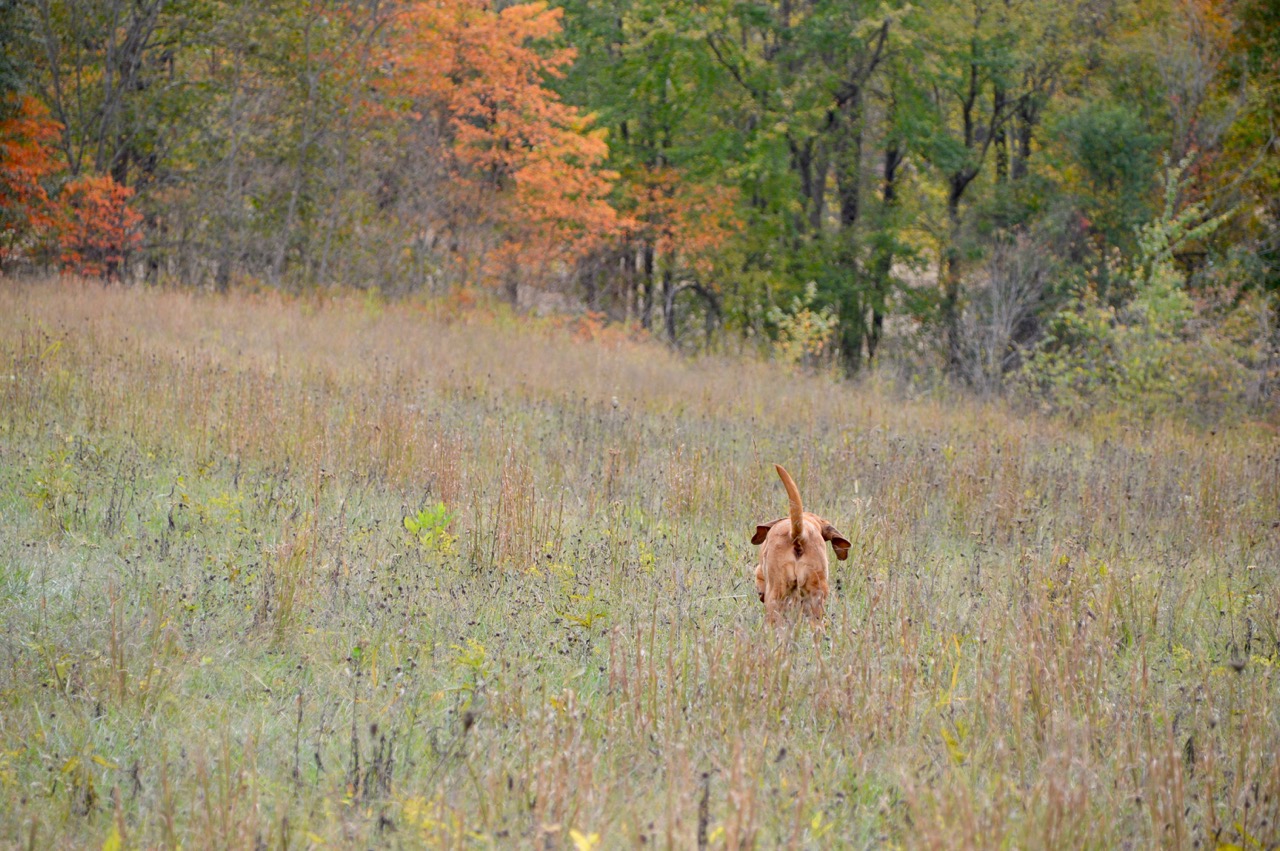 I backed out the lens for a larger area and didn't see Stella anywhere. Had she disappeared on me again? 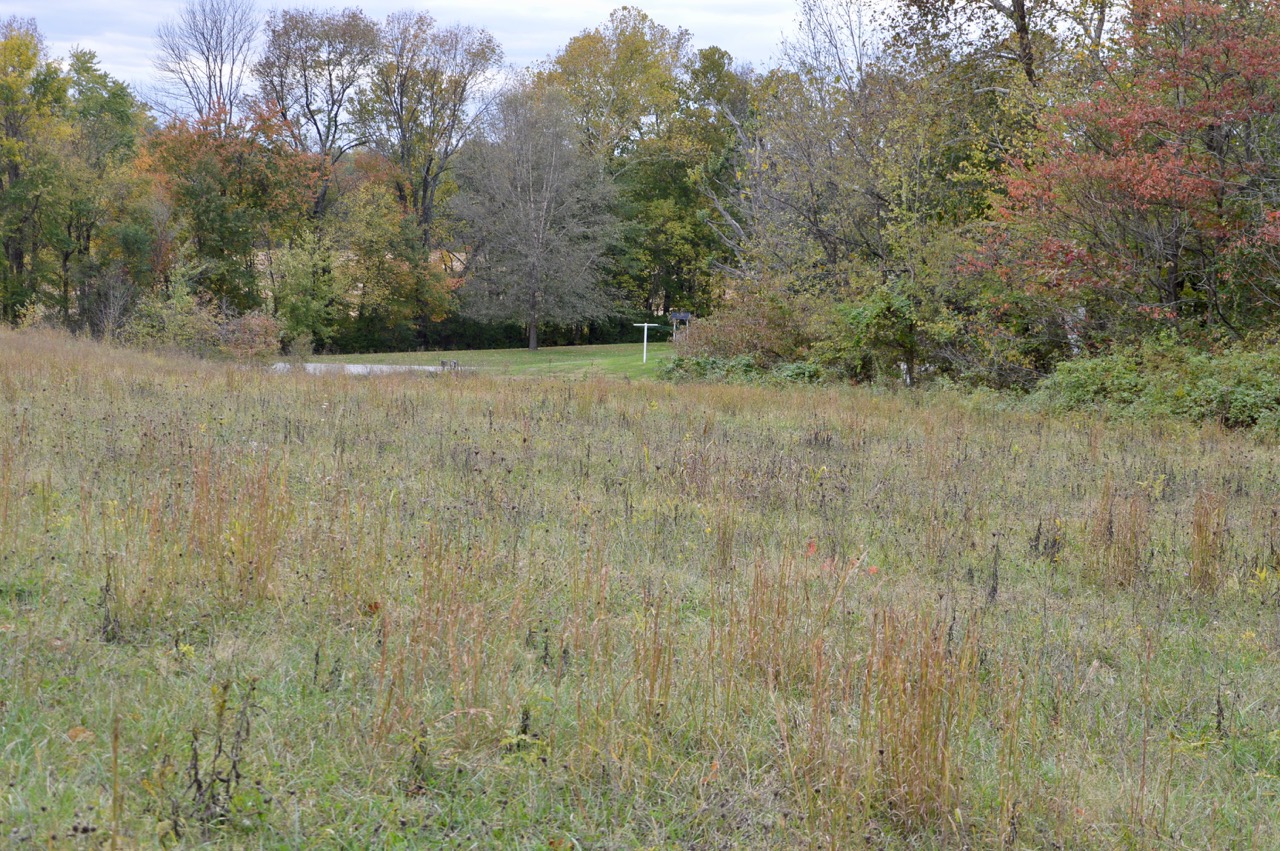 I zoomed my lens to the 200mm setting and started scanning the field from left to right ... there she was heading north but not far from the area we left her. She had barely moved during the time that Sadie and I made most of the walk. 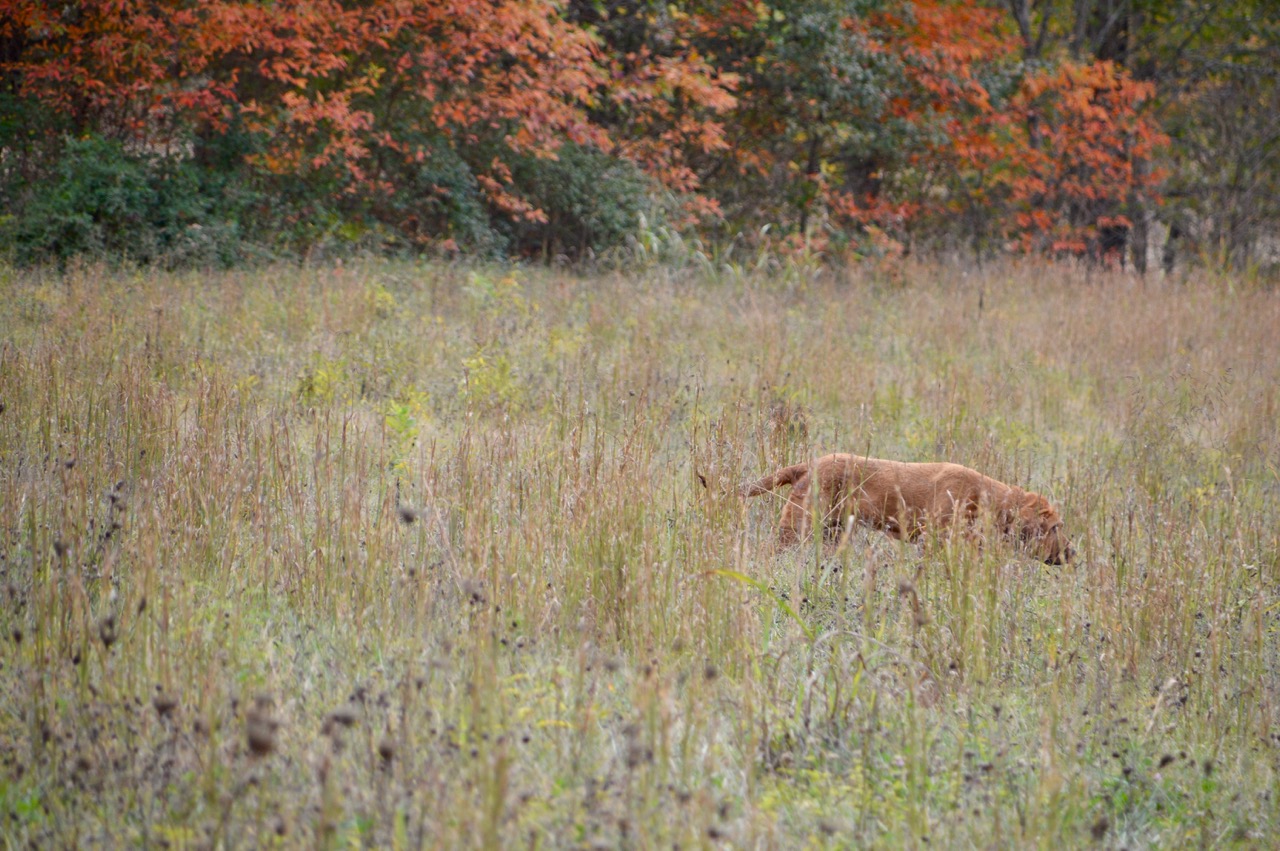 As I kept yelling the word "hey" ... she finally looked up trying to figure out where that sound was coming from. 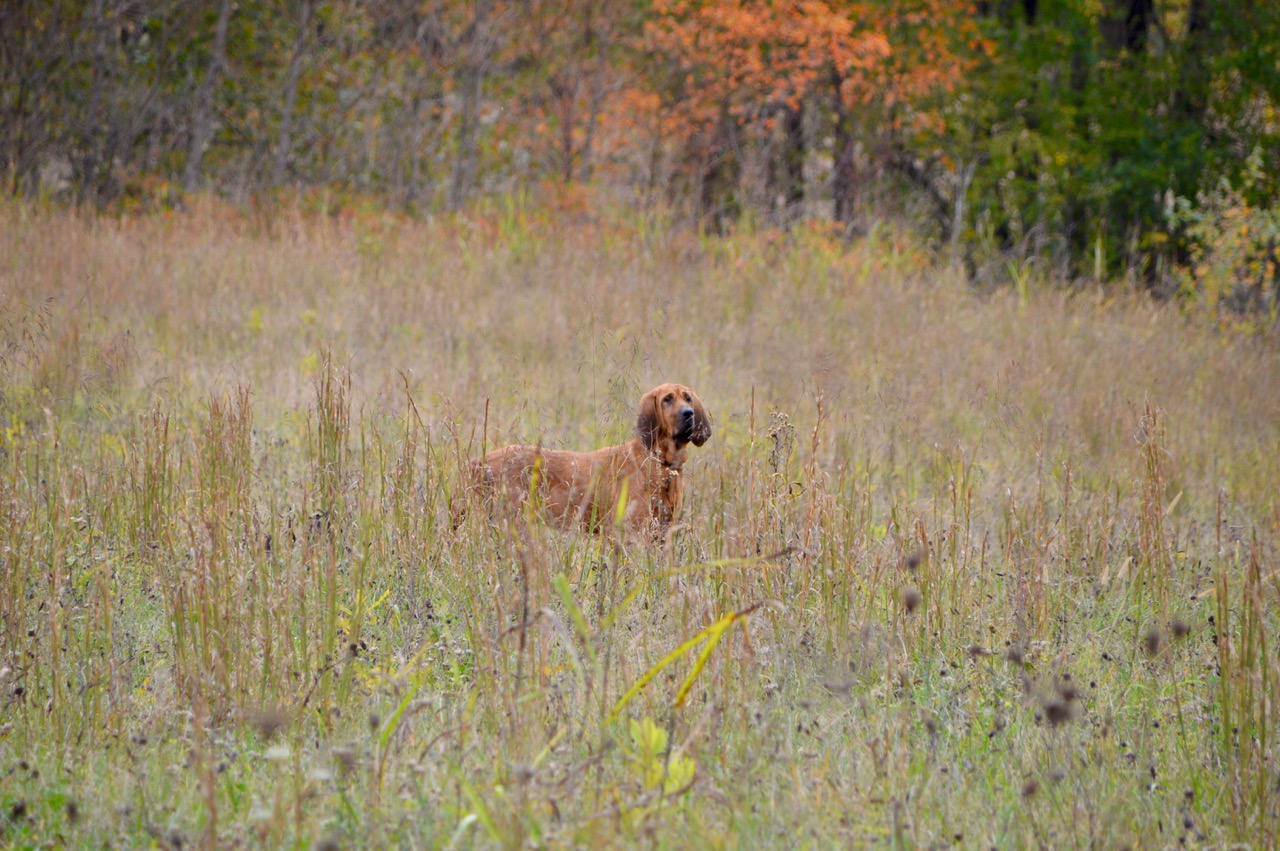 Once she recognized the voice she turned and headed our way back to the alternate path we were taking. 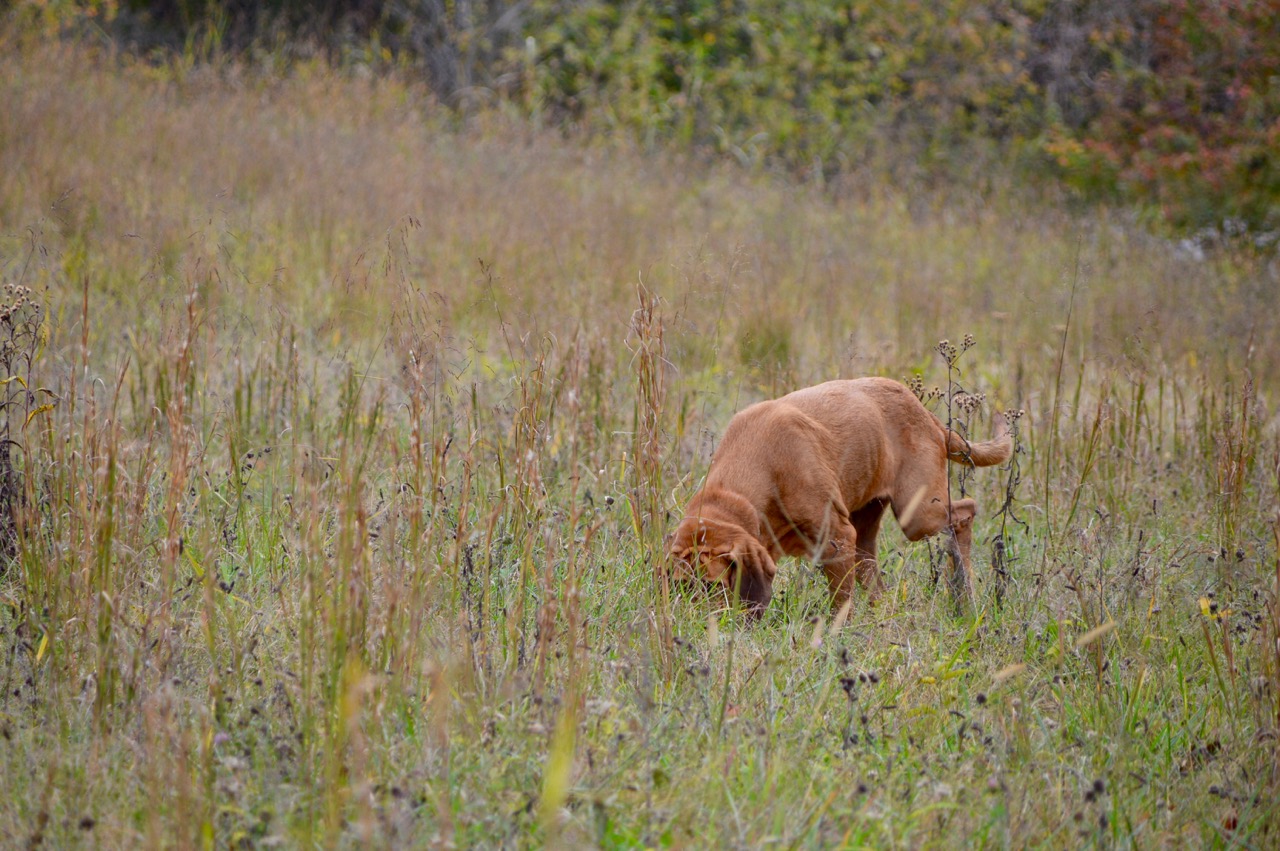 There was nothing exciting the rest of the walk. Both hounds were cooperative and seem to want to get back to the house as fast as I did ... they were both asleep next to each other beside my computer desk within minutes of walking inside.

I wouldn't call them high winds but it's been windier than normal today blowing the leaves off the tress and even out of the yard at the same time. It's most likely our last warm day at least the next ten days at 77°. I suspect that might be it for this summer. So we move into the fall with the 50s and 60's as temperature highs, every day or night has a lingering smell of fire smoke from brush burning or people having a fire at night. That still beats the oil drilling smell I had a few years ago.

Here are the first three tree limbs to start the 2018 Burn Pile. 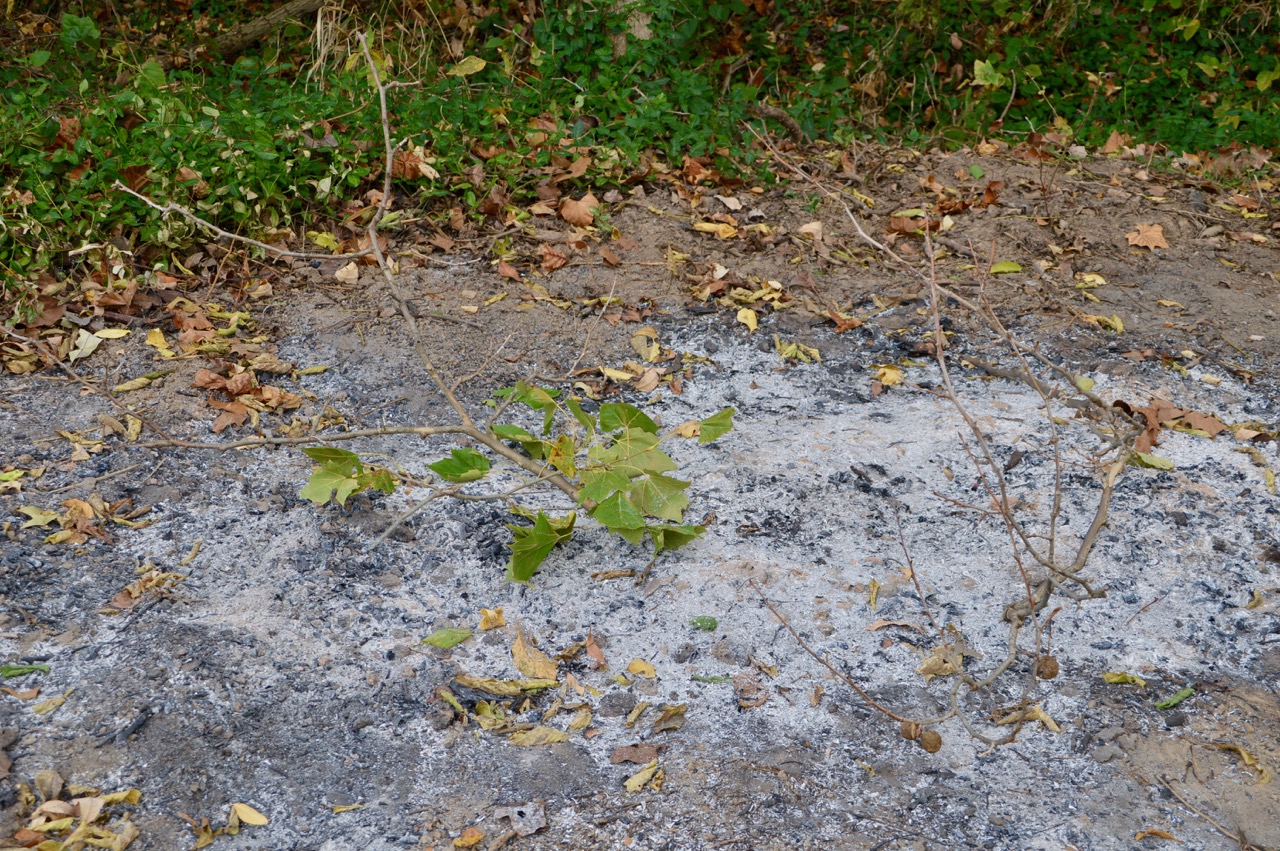 With an overdose of college football yesterday, plus a final Game 7 in Houston I had to watch last night, this sports addict was not in the mood for the NFL. In fact the tv has not been turned on and it's already after 5pm as I write this. It seems to me over the past few years my interest in the NFL during it's season has decreased. I suspect there are various reasons and I can't put my finger on any specific one. It's not just this year but has happened the past 3-4 years.

With college basketball starting in 3 weeks and college football playing 5 more weeks before they start December with a month or more of Bowl games and then the 4-team playoffs ... the NFL may get slid further back on the shelf until their playoffs and Super Bowl.

Besides, that show Dr. Jeff - The Rocky Mountain Vet has a higher priority in the recording manager feature ... and it's a great show.

Not much more to report on here in 'the tropics' of Southern Indiana.
at October 22, 2017