We Are Back To Blogging Publicly 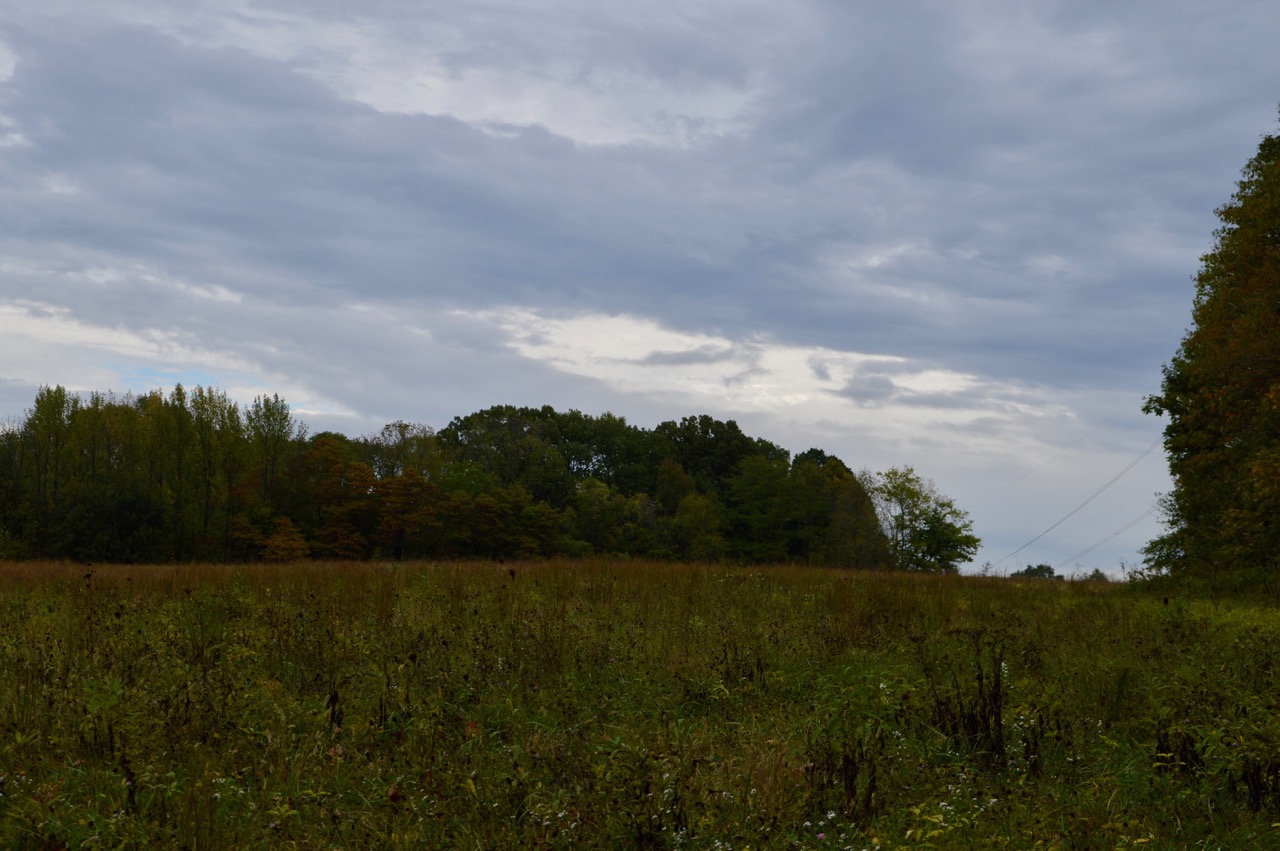 I cannot really go into why we are back blogging publicly since it's too in depth to explain, would take too many pages and I still might not have all the answers to the question 'why' ... but here we are back to blogging publicly with plans to continue. I am not sure about the frequency though but this is a start. I will say before I get started that all the hounds are doing fantastic and I think you will see that Sadie has not changed, Stella has gained all of her lost weight back as has Heidi. These photos were taken this morning, and Heidi's were taken in the past 10 days as she prepares for wintertime hibernation.

I can't say there are any drastic news announcements since our daily activity is about the same. The weather is trying to stay cool but it's still humid most days. We get 2-3 walks in per day yet Heidi is back to boycotting any kind of activity that takes that long to complete the walk. She is not into counting how many steps she takes besides from her couch to her food dish. 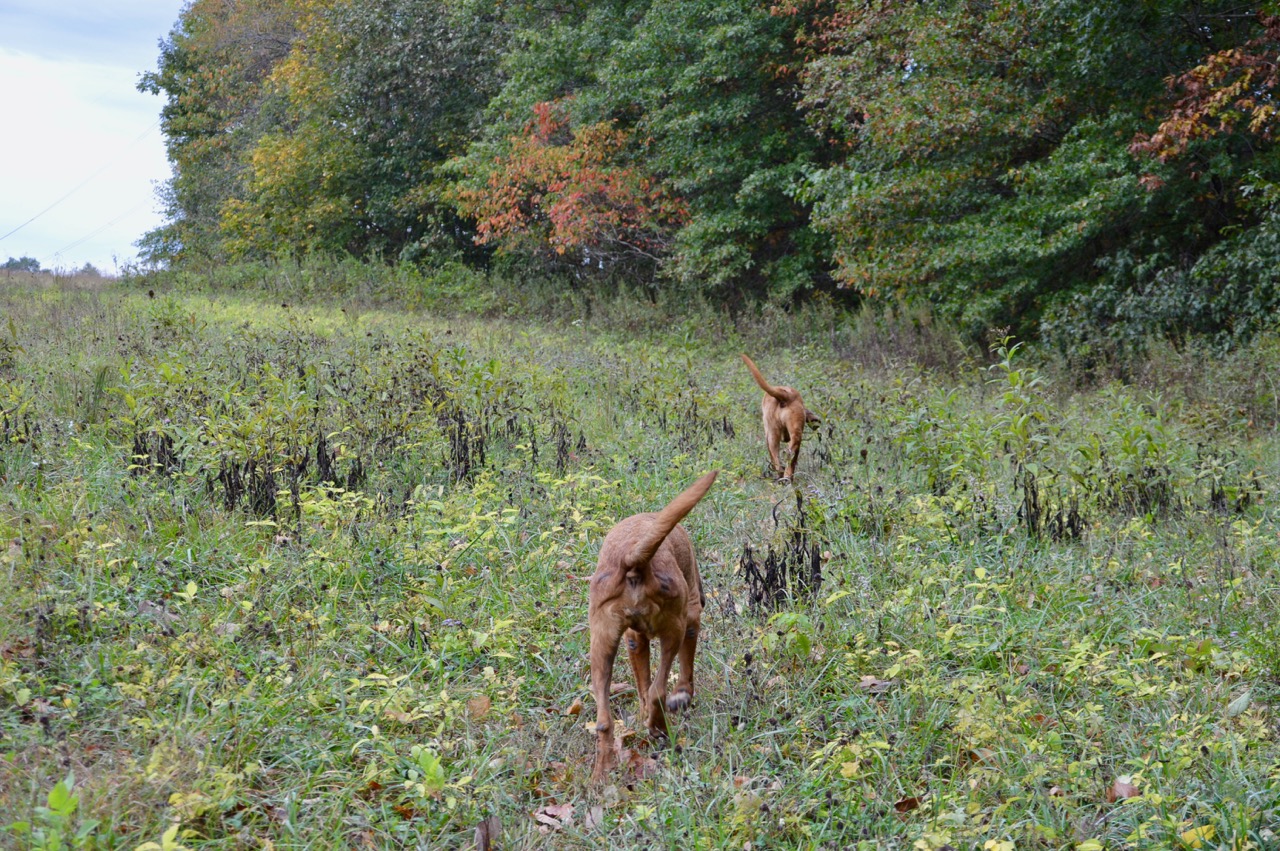 Sadie as usual leads most of the walks while I have been letting Stella do her own walk, letting her go where she wants as Sadie and I pick her up on our way back. As far as deer go ... their noses need calibrated. Last Thursday on our afternoon walk, with both of their noses to the ground I heard tree limbs breaking only to see as I glanced into the woods a large deer turning and heading away from us down into the gully. 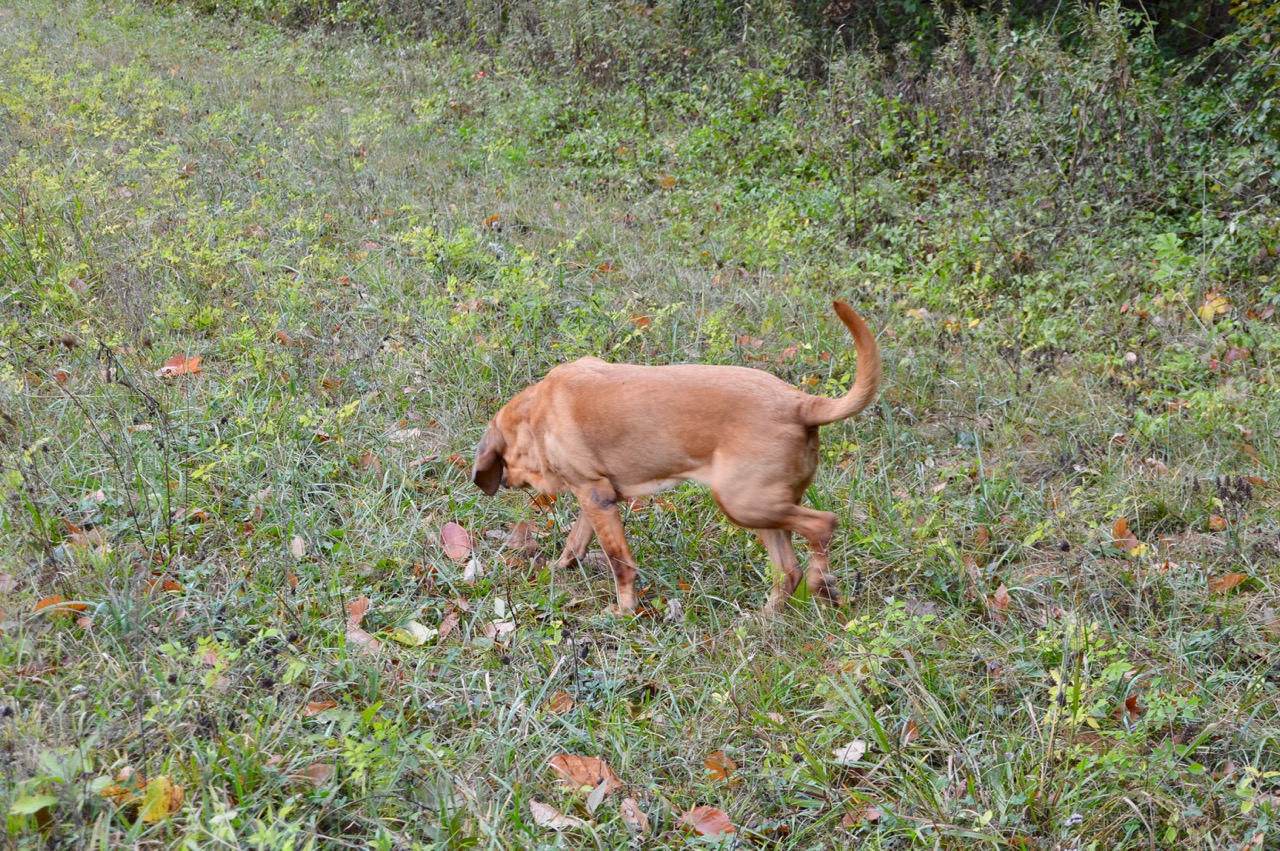 The hounds never knew how close the one deer was to them.

ATV traffic has continued but mostly only one neighbor riding late afternoon after school. I have a feeling that he has mounted some new field cameras that he checks daily. 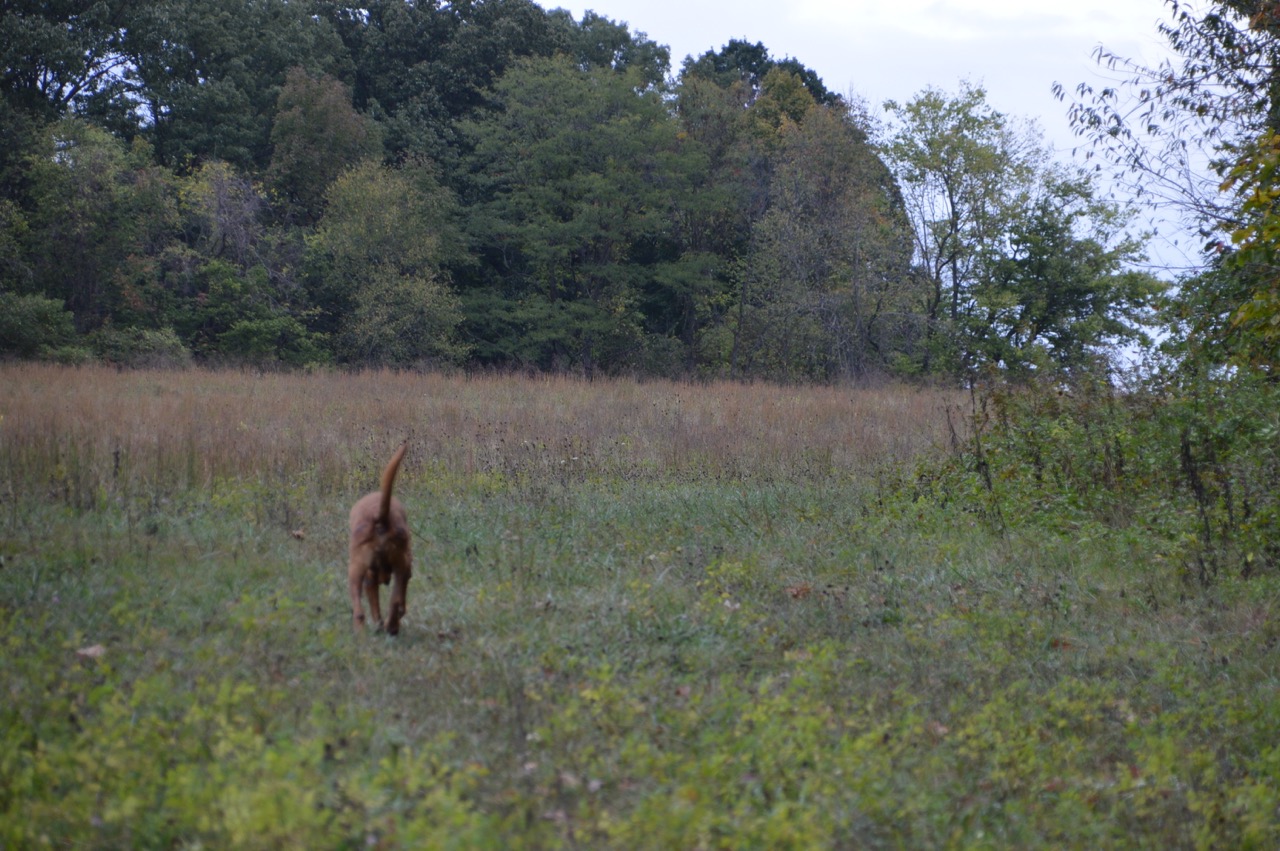 I feel really good about Stella regaining her lost weight. I think if you look at them from the side it is a little hard to tell which is Sadie and Stella ... only the collar shows it's Stella. Nothing has changed since February as far as kind of dog food and not too much of an increase in quantity. 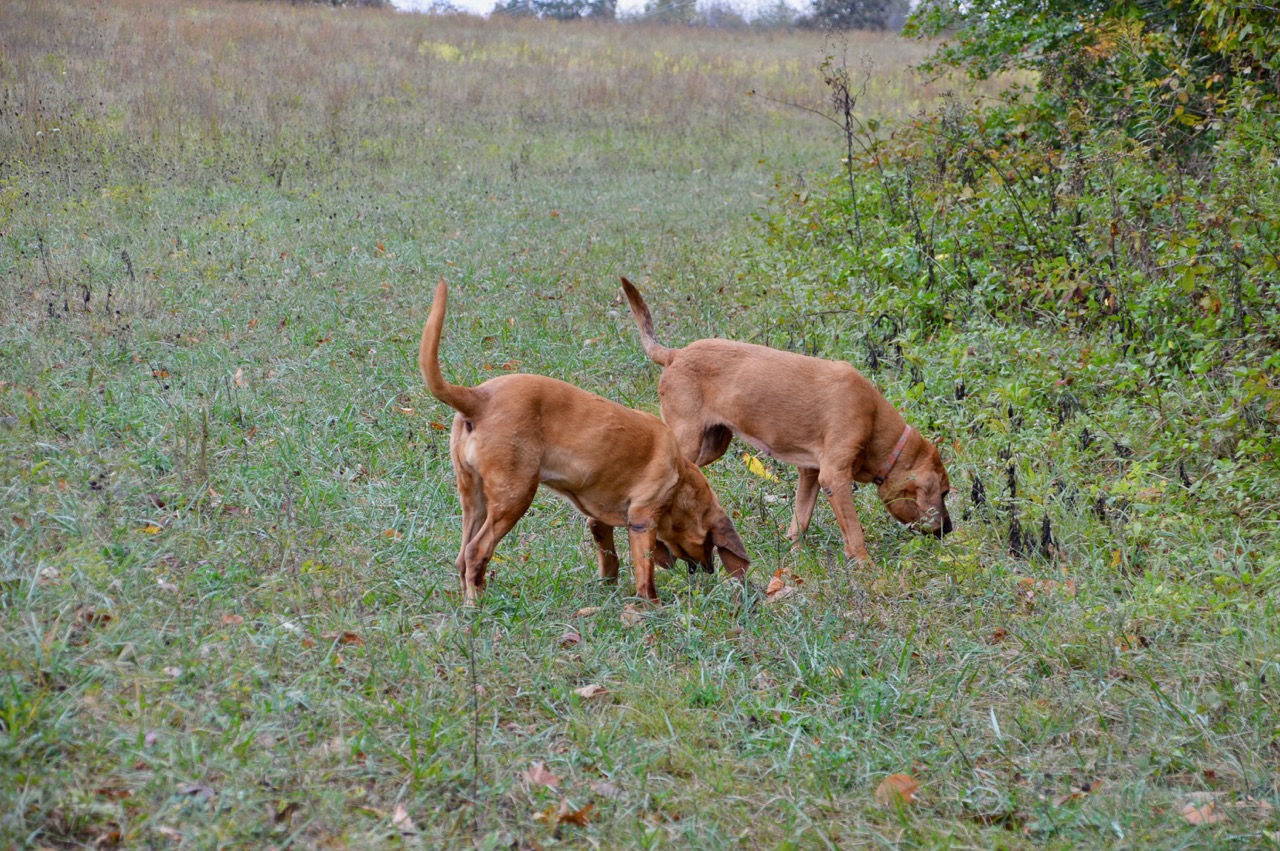 I can't say that I have finished and marked off many things off of my 'to do' list since we last blogged on the Wordpress blog sometime early September. When I went to reconstruct this blog, evidently I did not do a backup of that Wordpress blog that I was using as my main blog from August 1st until the middle of September. 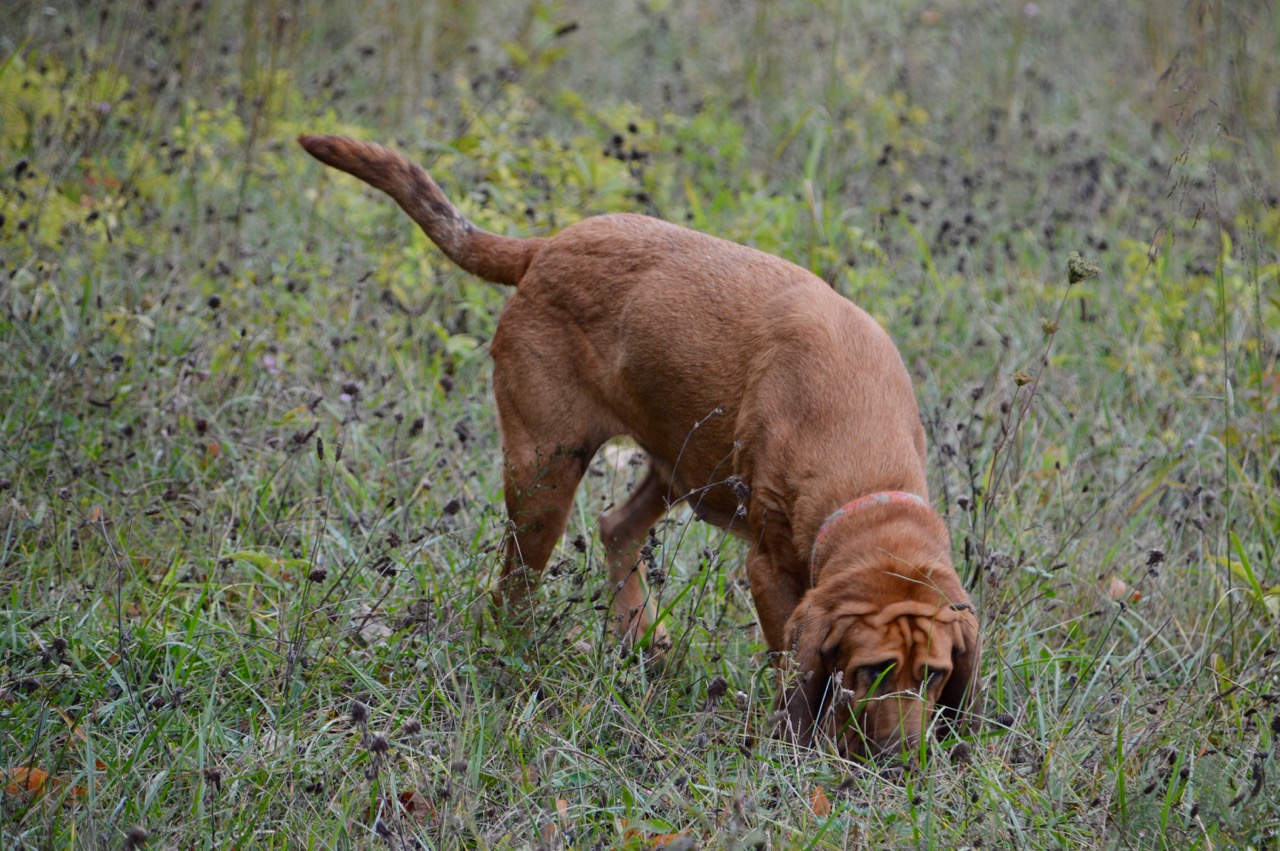 I did have a backup .xml file of my old Blogger blog that was dated September 15 ... yet that was only posts, comments and pages ... not the template nor settings. So I have tried to rebuild the template into the same Blogger blog I had before deleting it. I'll slowly be making more adjustments, getting it as close to the old format as possible. I have added the Blog List with as many blogs as I can remember that I was following. I'll more of them as I find their url's or remember them. 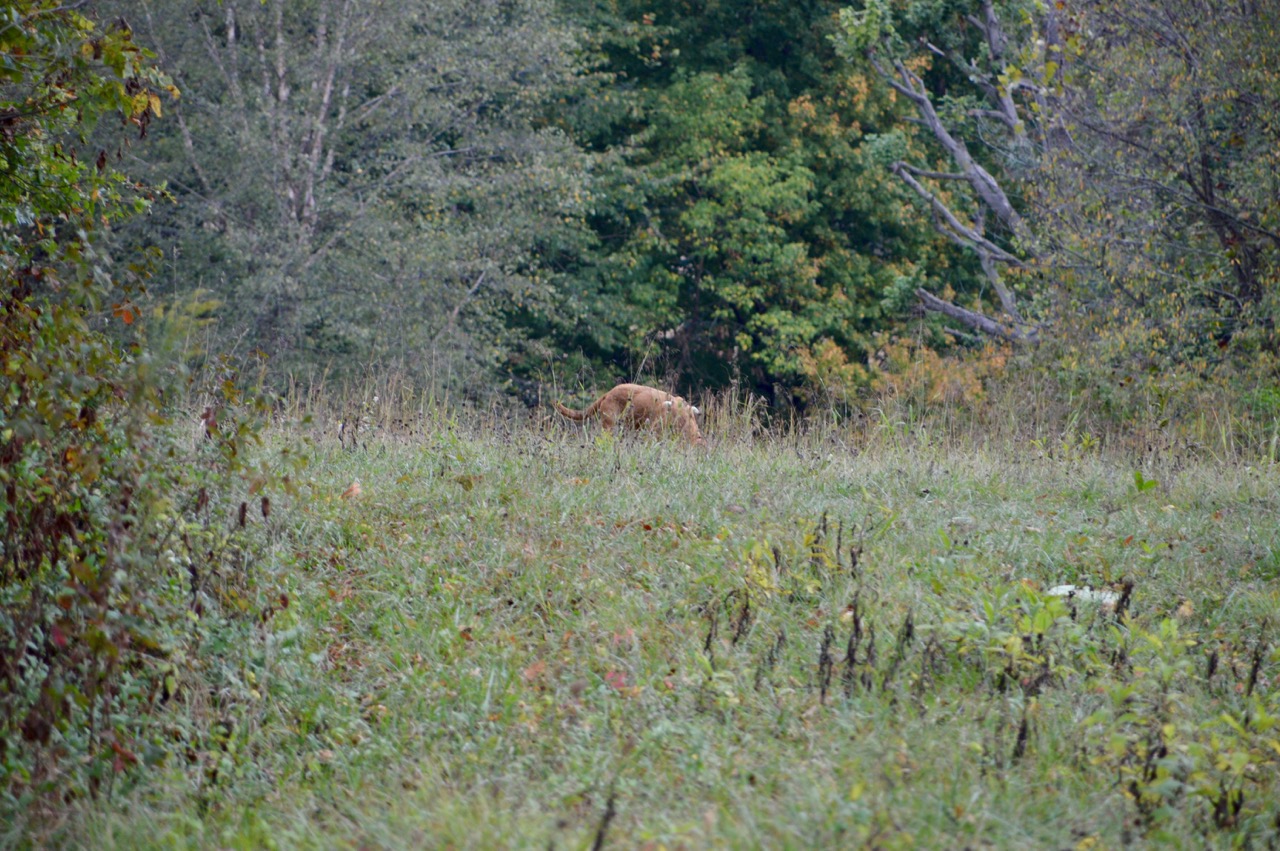 A few weeks ago they removed those 8 rolls of hay that were parked in back of the field. Sadie is checkout those parking spaces in this photo. There is never a walk, no matter how many per day where she searches and explores most of the field. 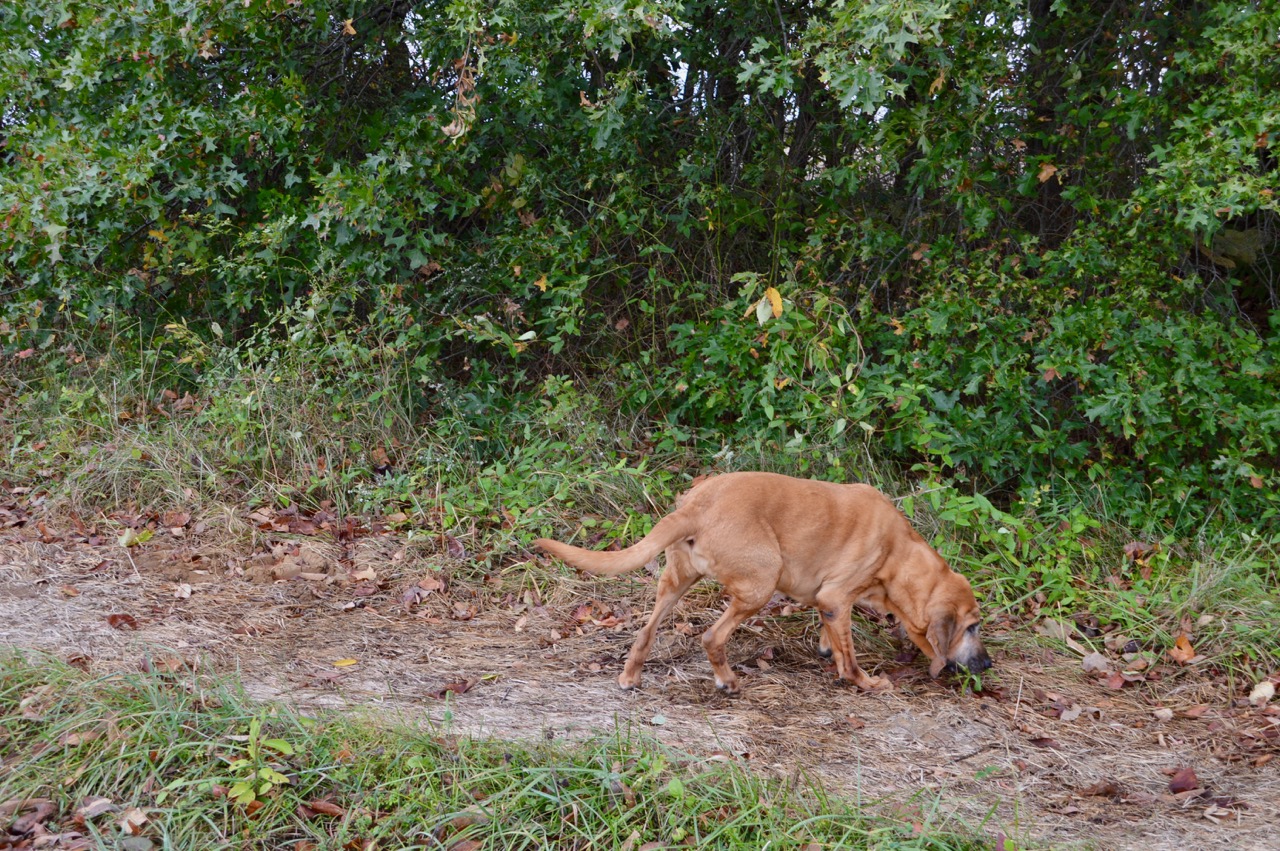 While we were walking along the back of the field, Stella was way behind us ... in the middle of the lower part of the field. 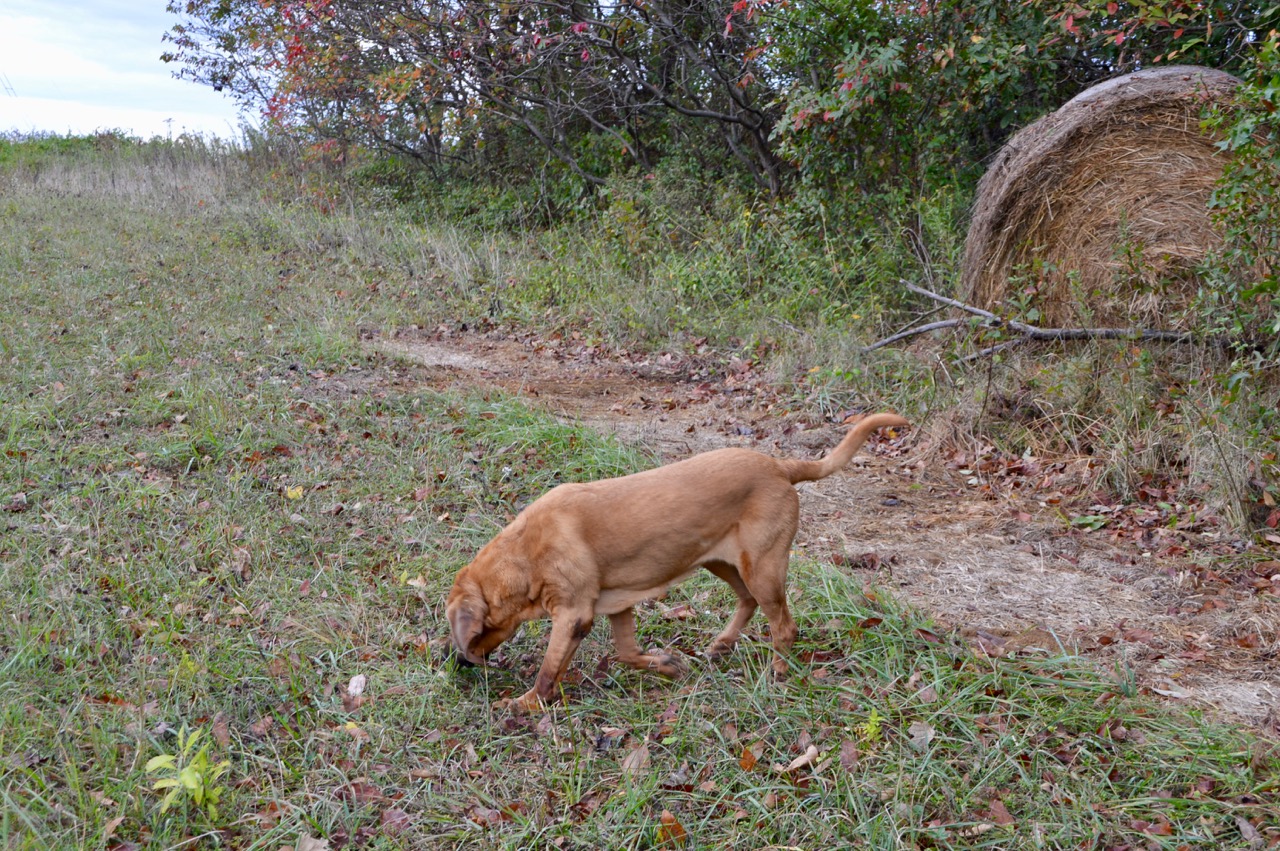 After a couple of days of rain and overcast skies, you can see we are not having a lot of fall colors yet. 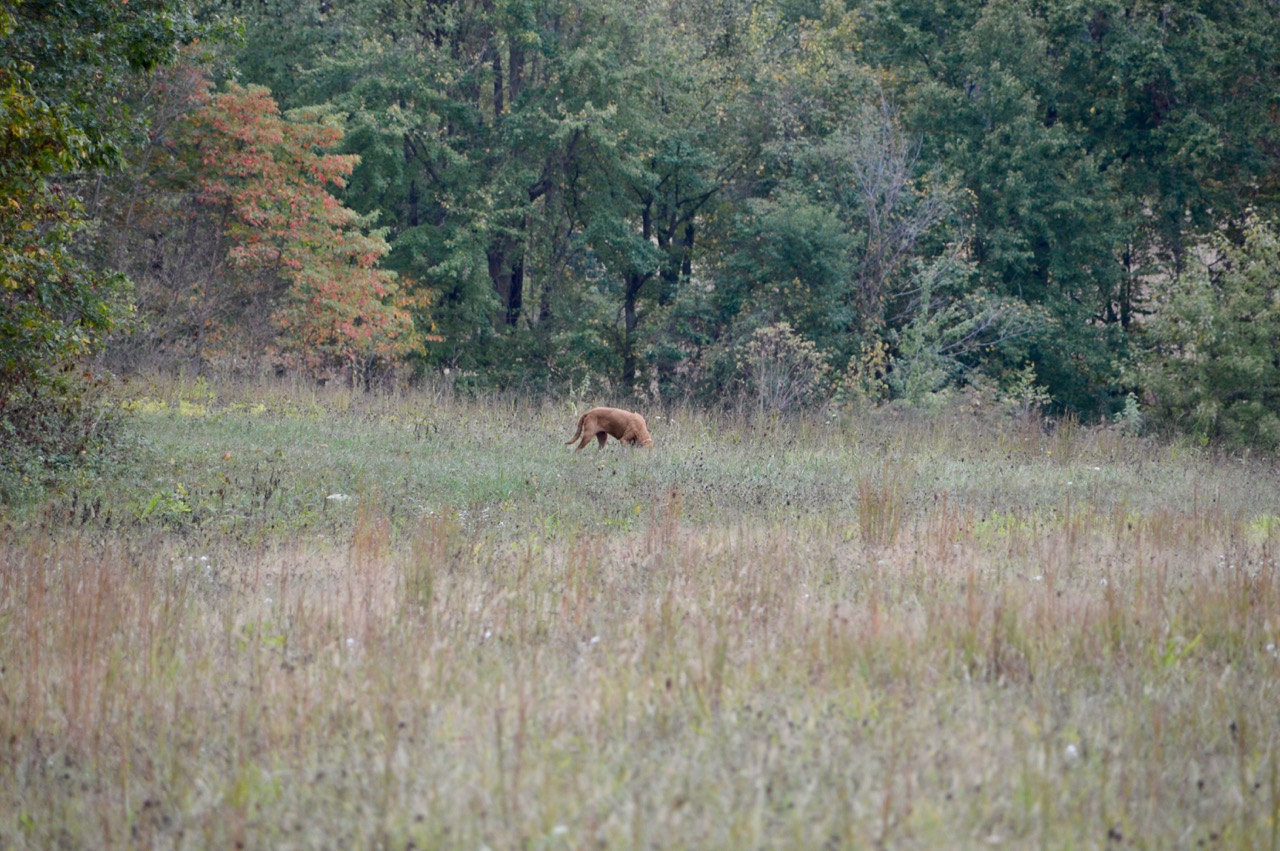 We have an alternate path on the way back now. I might have mentioned before, but it angles toward my north property pole. Luckily today when I called Stella's name, she turned around and headed our way to actually walk with us back to the yard. 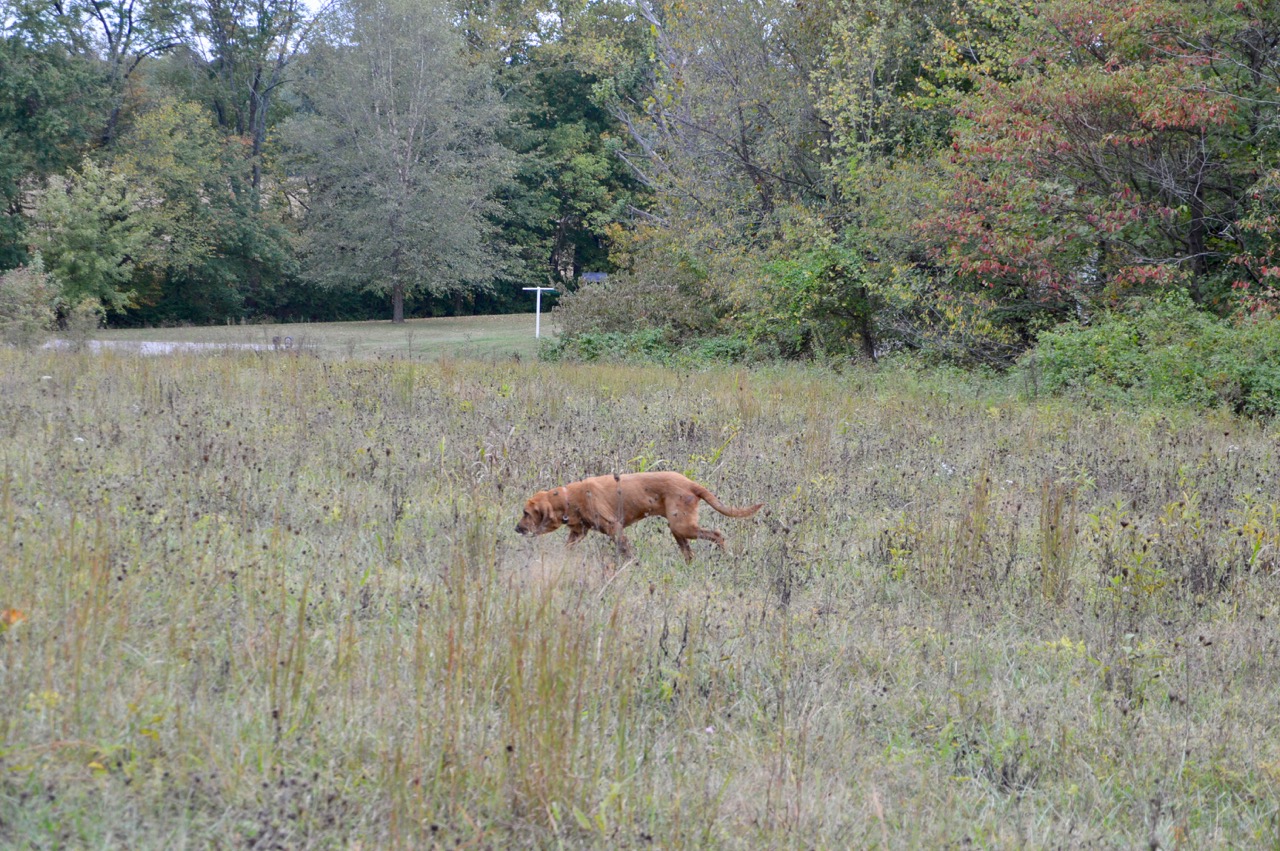 She went from this pose of ignoring me to trotting into the yard without me calling her. I was facing the opposite direction when she ran past me .... 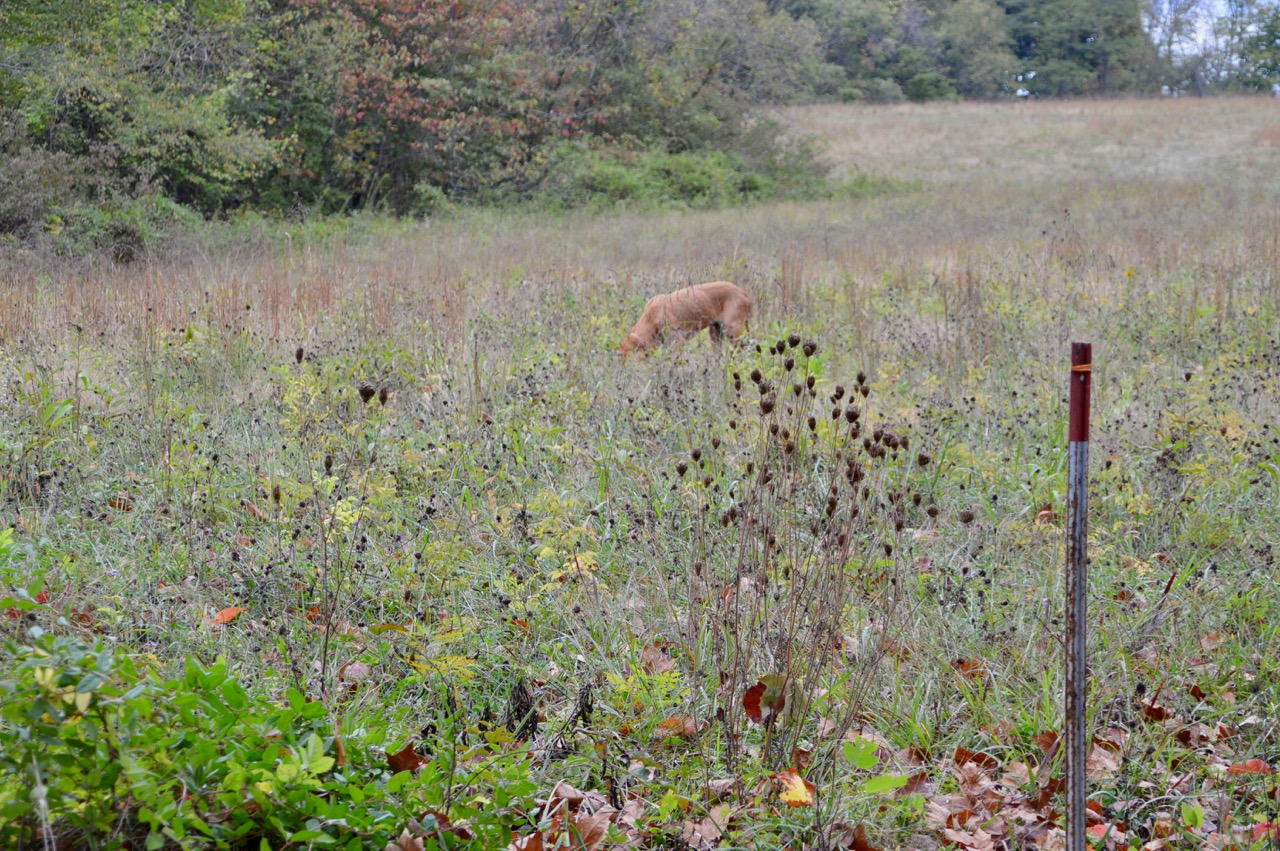 For the first time in 8 months ... she played, and wrestled with Sadie. Sadie may have felt it was time because as soon as Stella's front paws hit the yard Sadie rushed at her wanting to play. Stella returned the favor and they were off for a short period of time. I had to look back through the blog 'topics' of "Bloodhounds Playing" to see the last time I had blogged about her wrestling ... it was in February. 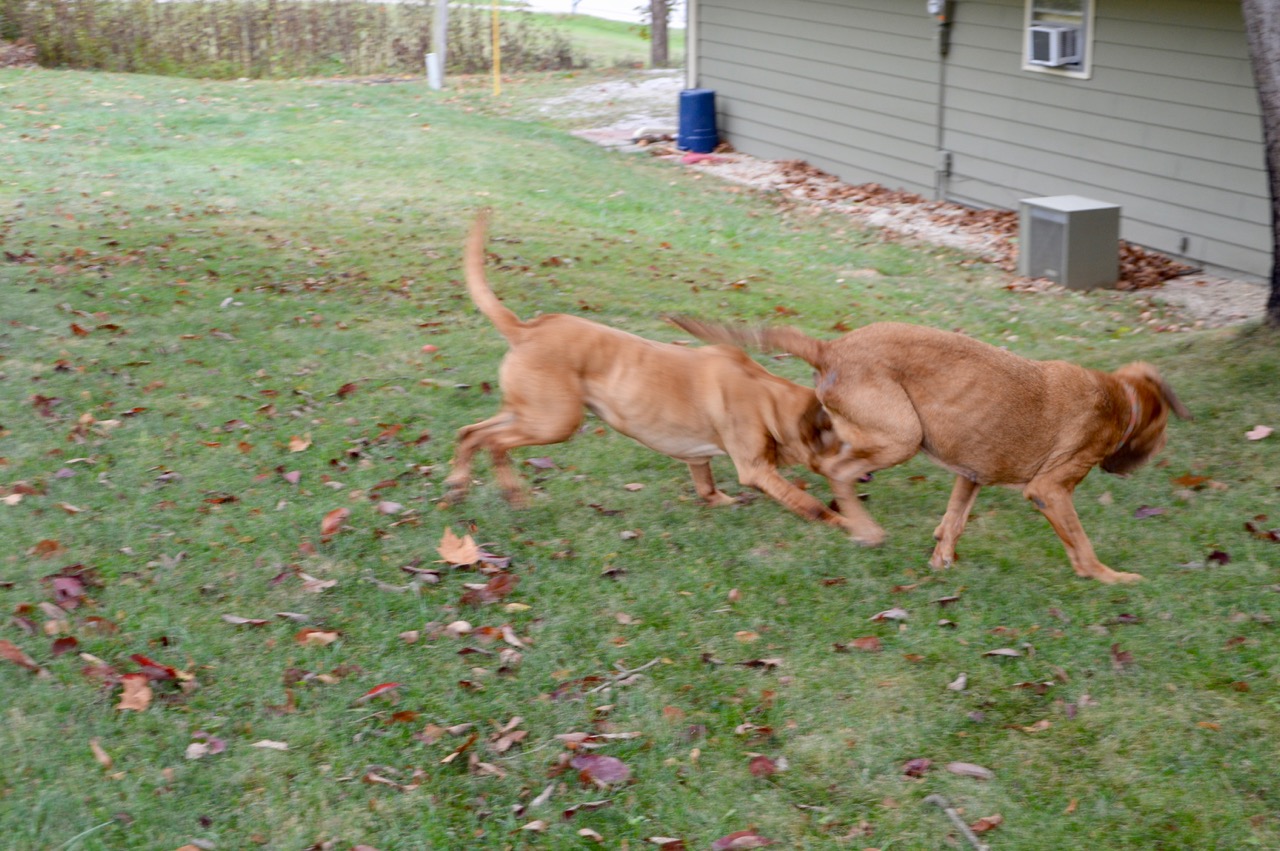 The high winds from last night cleaned up a lot of the yard that was full of leaves, although very few have fallen from the trees. 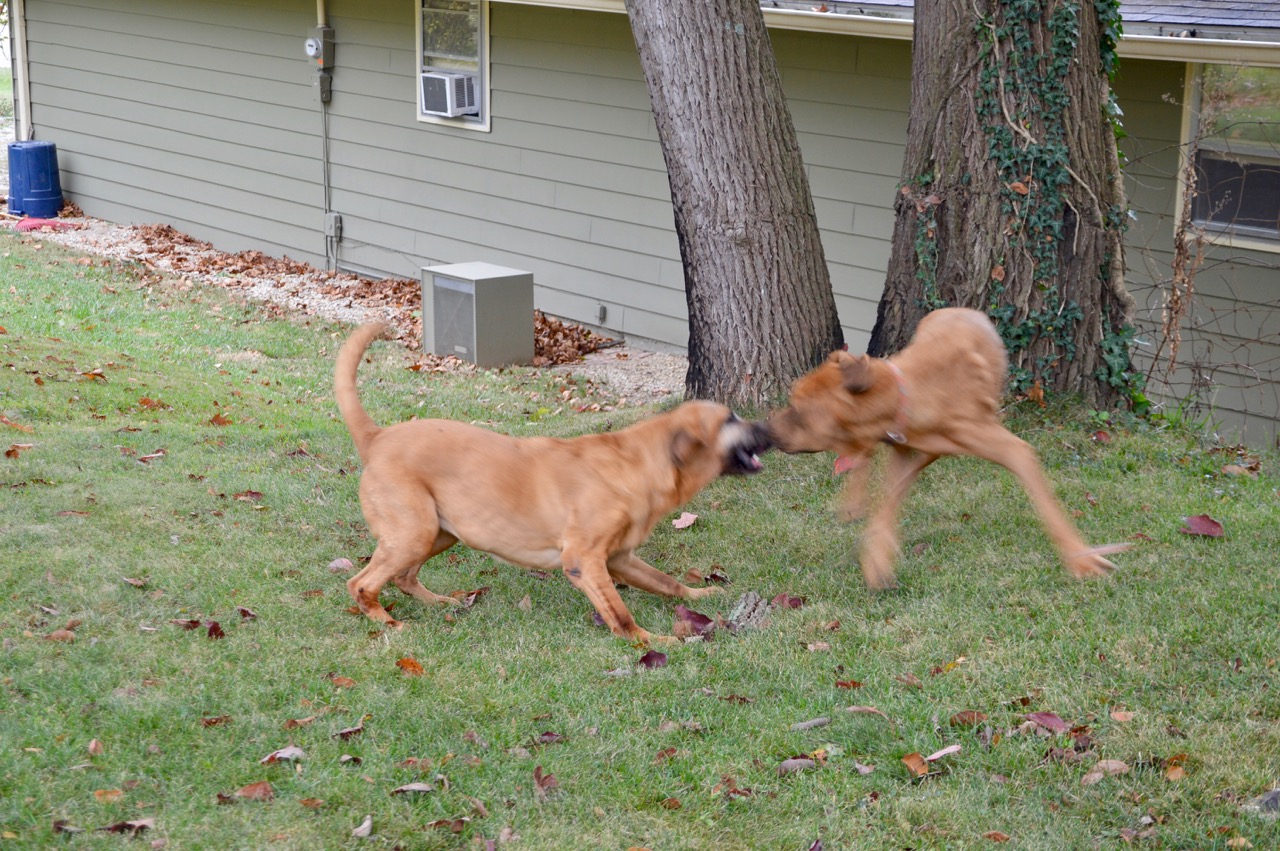 With my old Central Air Conditioner going on the repair list during the hottest days a few weeks ago ... I had to add a small window AC for my computer room. That small air conditioner pumped out more cold air than my older central air unit. Estimates are telling me it's around $3,000 for replacement. I'll have the fall and winter's cooler temps to come up with my next plan before next summer. 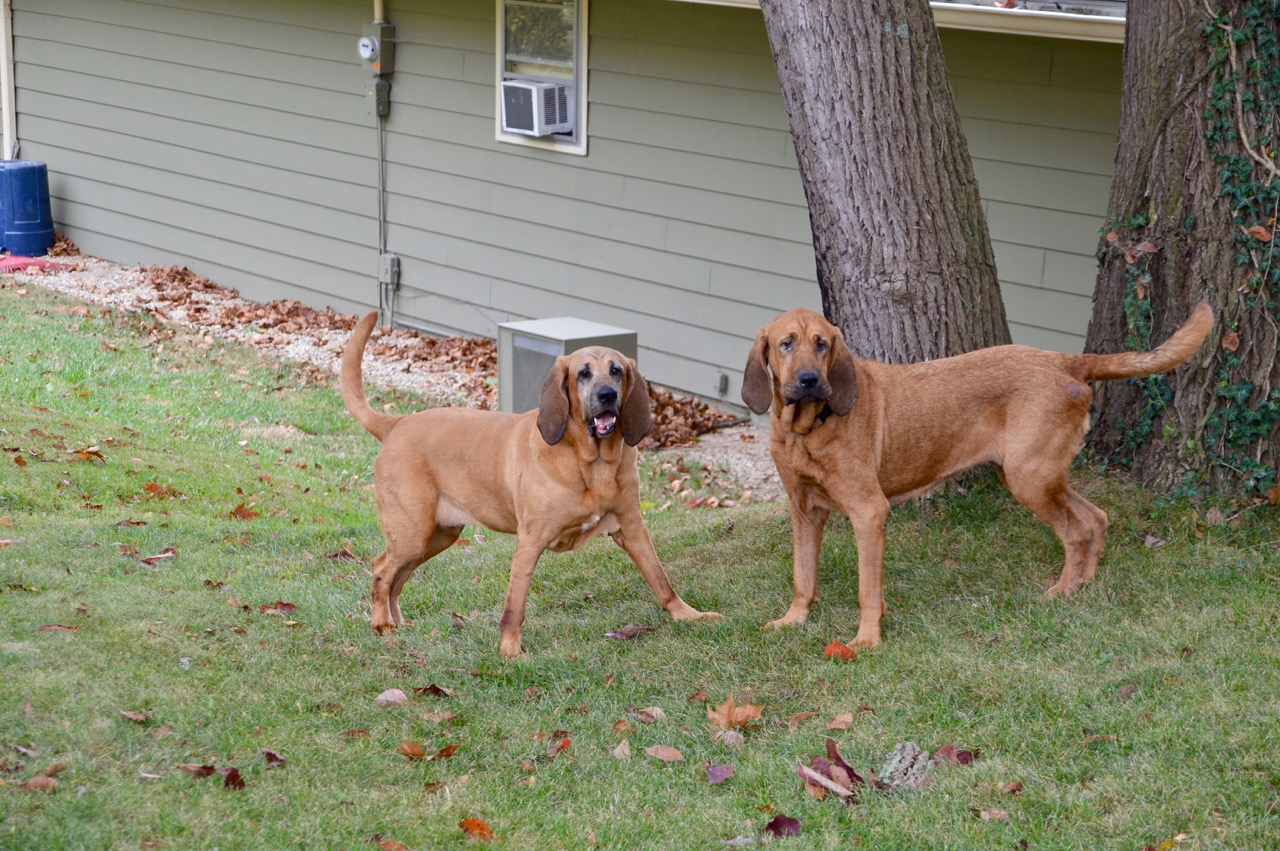 Since I was up too late last night watching college football from the west coast .. we woke up late and the hounds were more than excited to stop playing when they heard the question "do you want to eat" ... they stopped immediately and ran to the door of the house.
These next three pictures of Heidi were taken the past 7-10 days. She enjoys time outside by herself and will spend almost 1 hour outside before she stands in front of the door to let her know she is reading to come back inside. She never barks to let me know but knows that I am checking on her to see where she's at. 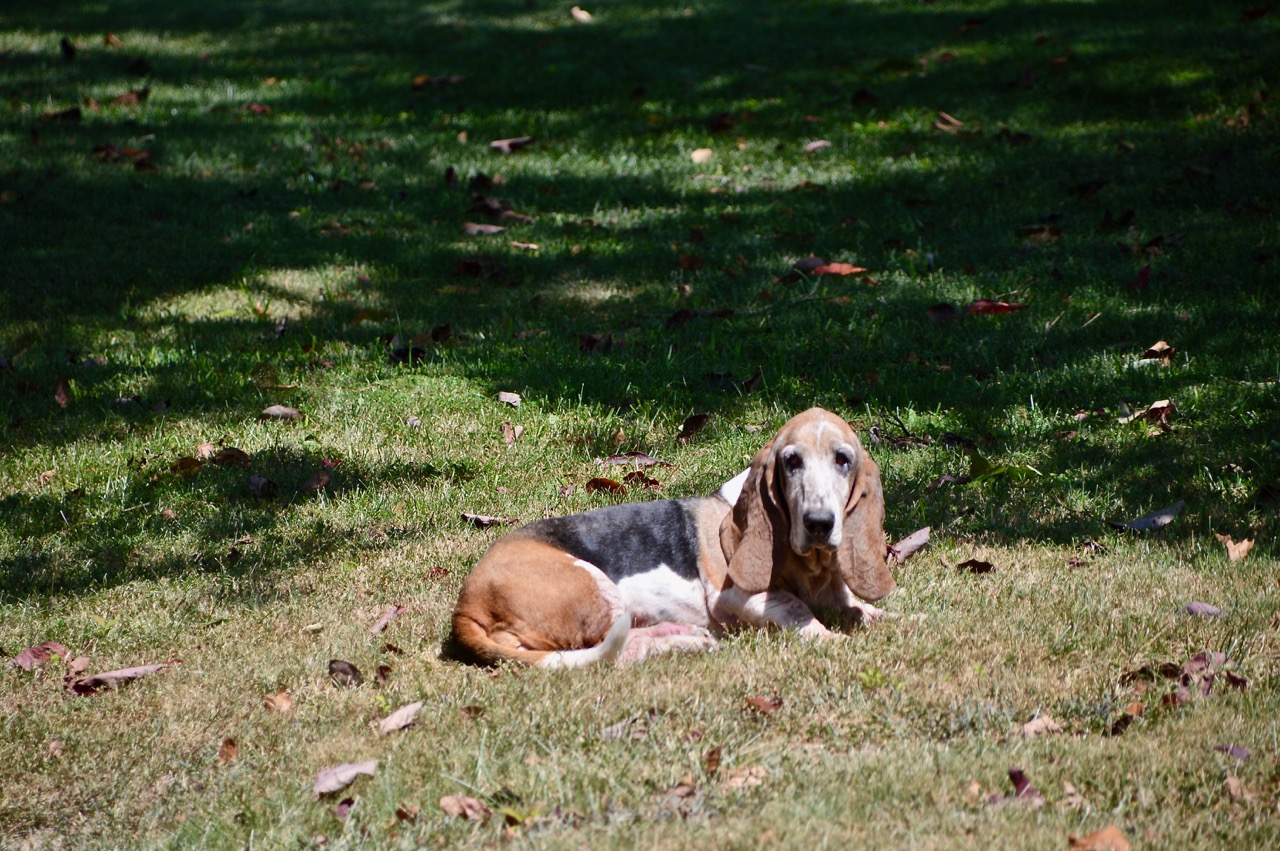 I have not taken her over to the vet to get her weighed but the times I have lifted her into the FJ, she 'feels' like 45 pounds, her normal weight from 2015. 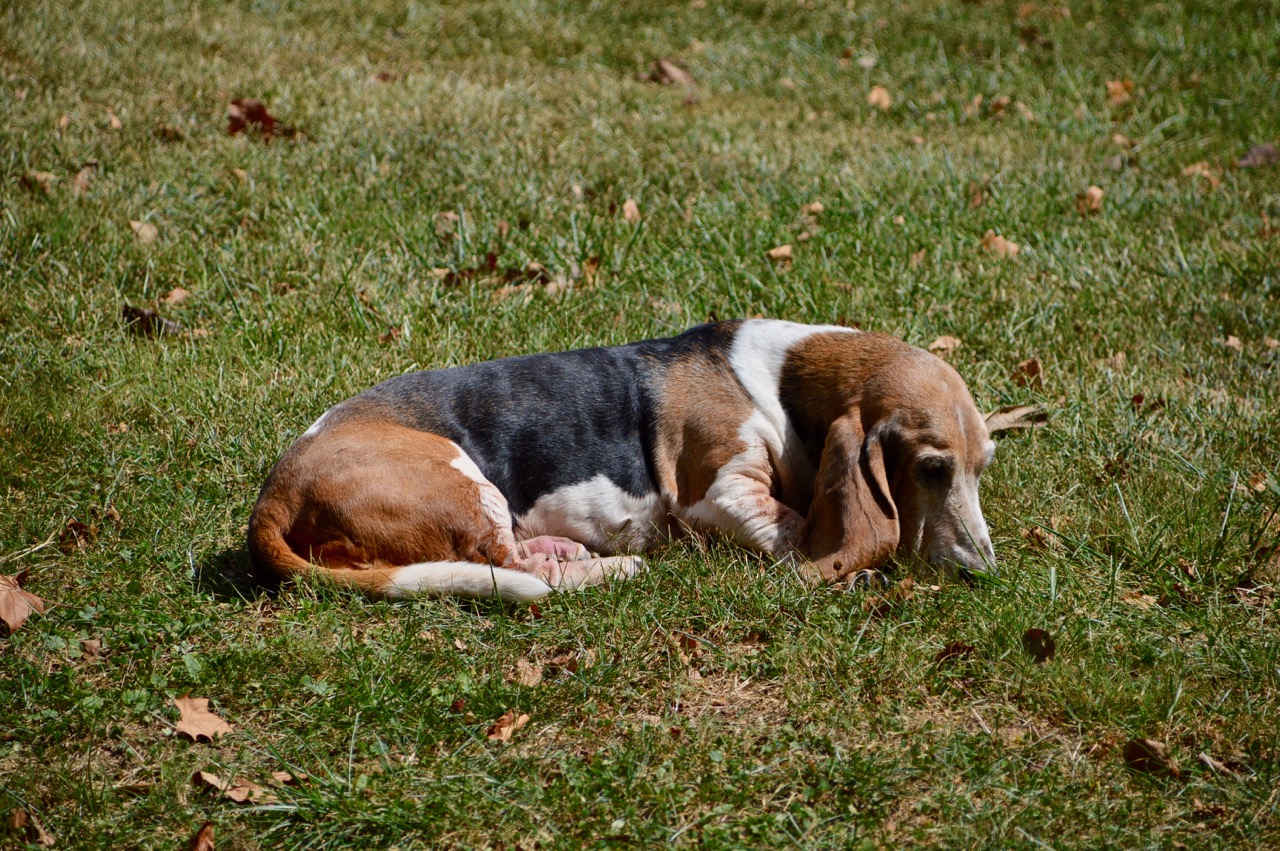 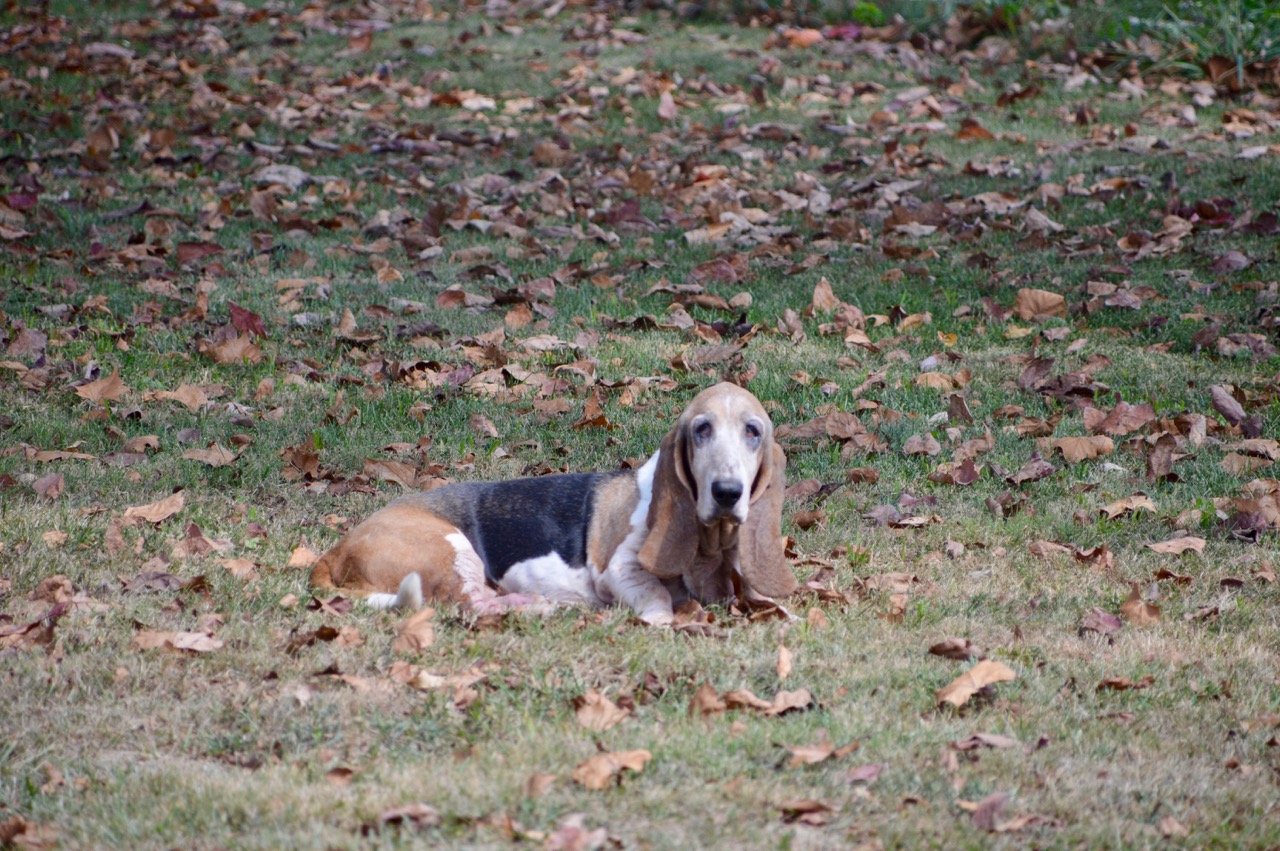 With a lack of sleep, another full day of NFL football and trying to rebuild this blog ... I'm a little tired. I'll add more information from the 3-4 weeks we were offline (blogs deleted) but really ... you didn't miss much ... daily routine stays the same.
All is good for all of us here in 'the tropics' of Southern Indiana.
at October 08, 2017