Stella Had Her Best Day Yesterday 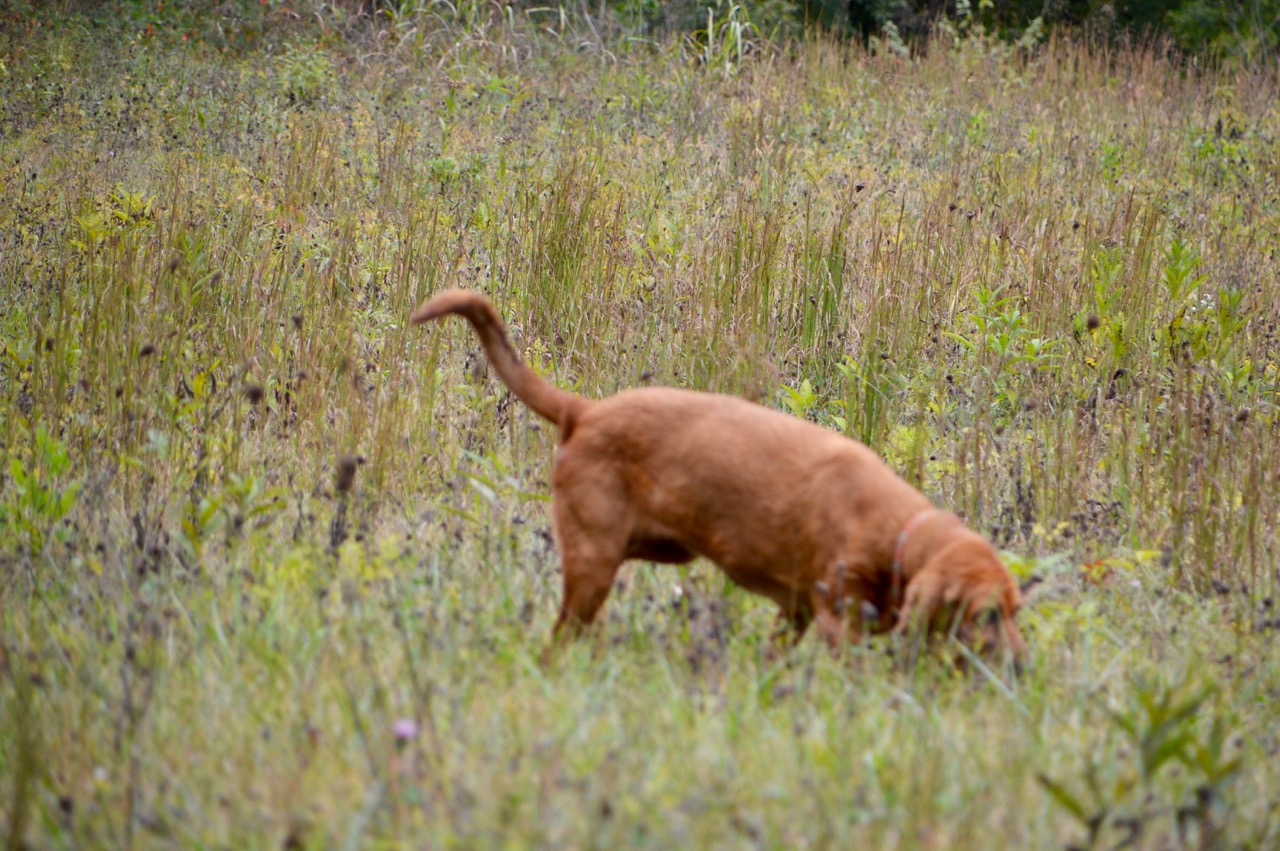 First of all ... to all the people that follow this blog "by email", getting new emails in your inbox each time I make a new post ... I APOLOGIZE !! One of those 'followers' emailed me yesterday to let me know that she had 56 new 'blogger emails' in her inbox for some reason ... finding out as she opened them plus reading my Tuesday blog post where I said I had gone back into my files and added 'old' post to fill in the blog date gap from August 2 - October 8.

I wasn't thinking at the time I was digging back into my blog backup file and adding those post ... I did not even realize that each time I posted an old post that you would receive a new email in your inbox. Almost like a blast of 'spam mail'. Believe me, that was not my intention. I just had a mental short-circuit I guess as I posted all of those old posts on Monday.
With my local electric company shutting my power off so they could move my service to their new lines they built last summer, about all I had to pass the time until my afternoon trip to help a friend out ... was taking these photos on the hound walk and playing Mahjong on my laptop. 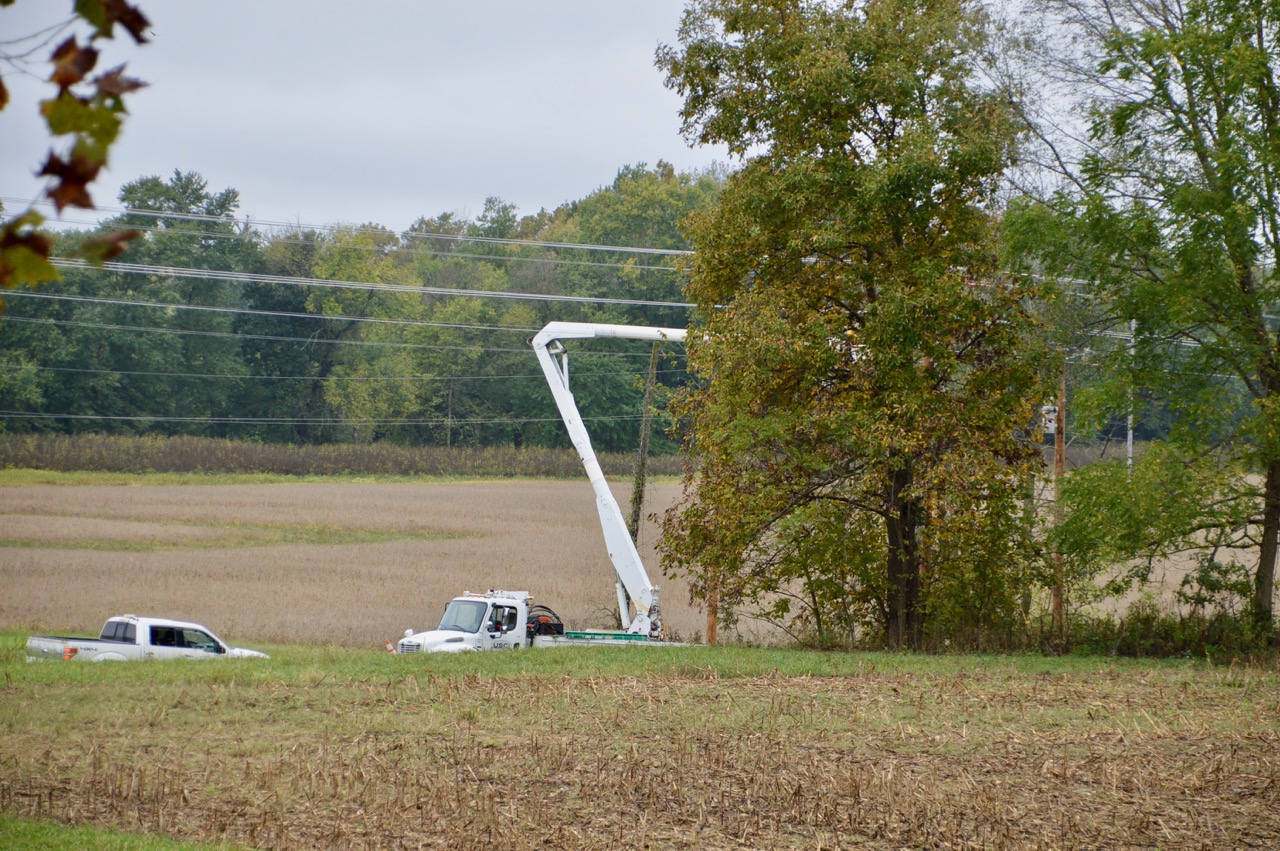 I couldn't believe what I was seeing before Sadie, Stella and I left for our morning walk under gray skies and cooler temps ... sweatshirt weather. Stella was nudging Sadie inside the house trying to get her to play/wrestle like she did last year. Sadie wasn't accepting the invitation because she was more focused on me getting ready to take the morning walk. But once we hit the yard and Stella finishing her short pee break ... she came running after Sadie and I just like 'old times'. She is definitely back to being close to her old self after not being well from February to sometime early this summer. Each day she is doing more running, playing and acting like she did when I first got her in August 2015. 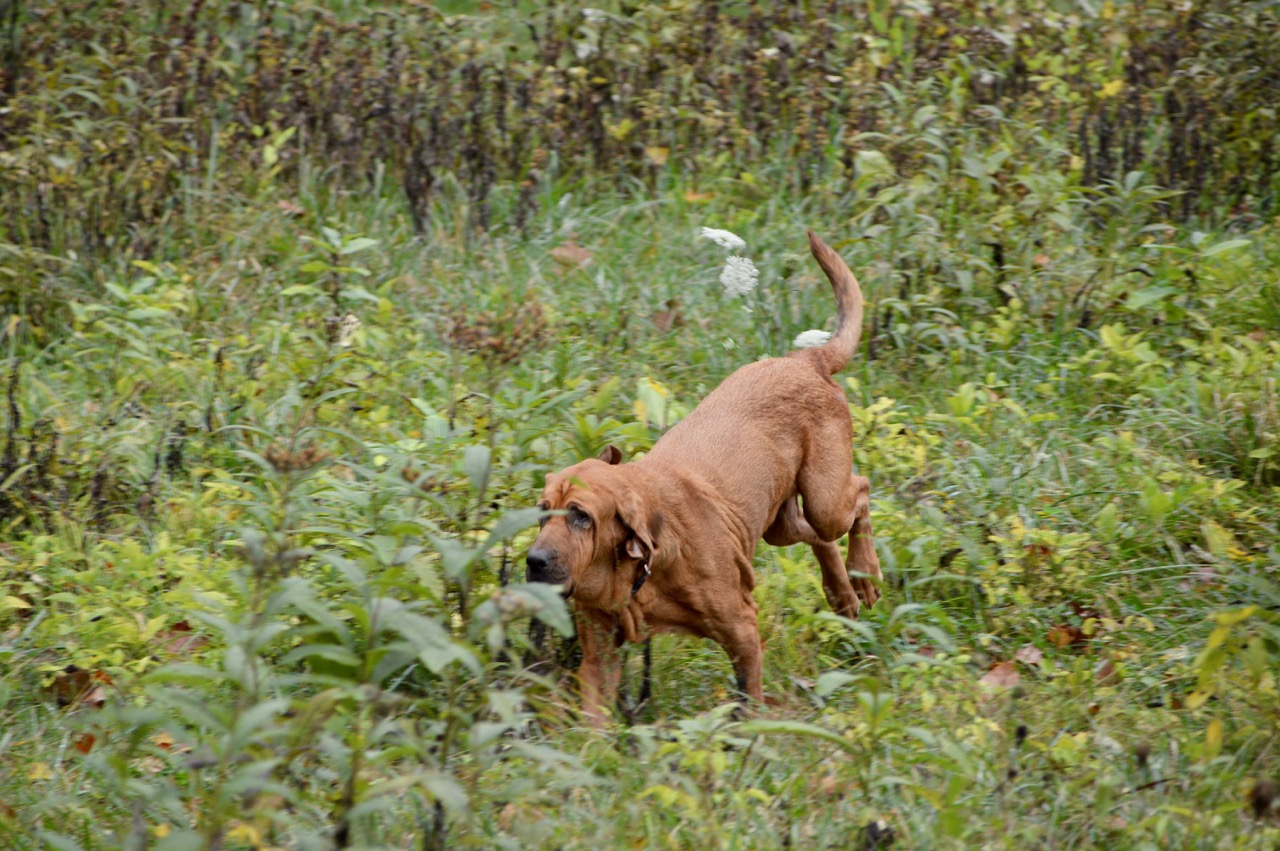 With the distinct taste of a new bag of Seattle's Best Coffee #5 running through my veins, I was able to keep up with these two bloodhounds. They didn't realize it but the hounds were also in for a little surprise like those blog followers by email ... later on last night. 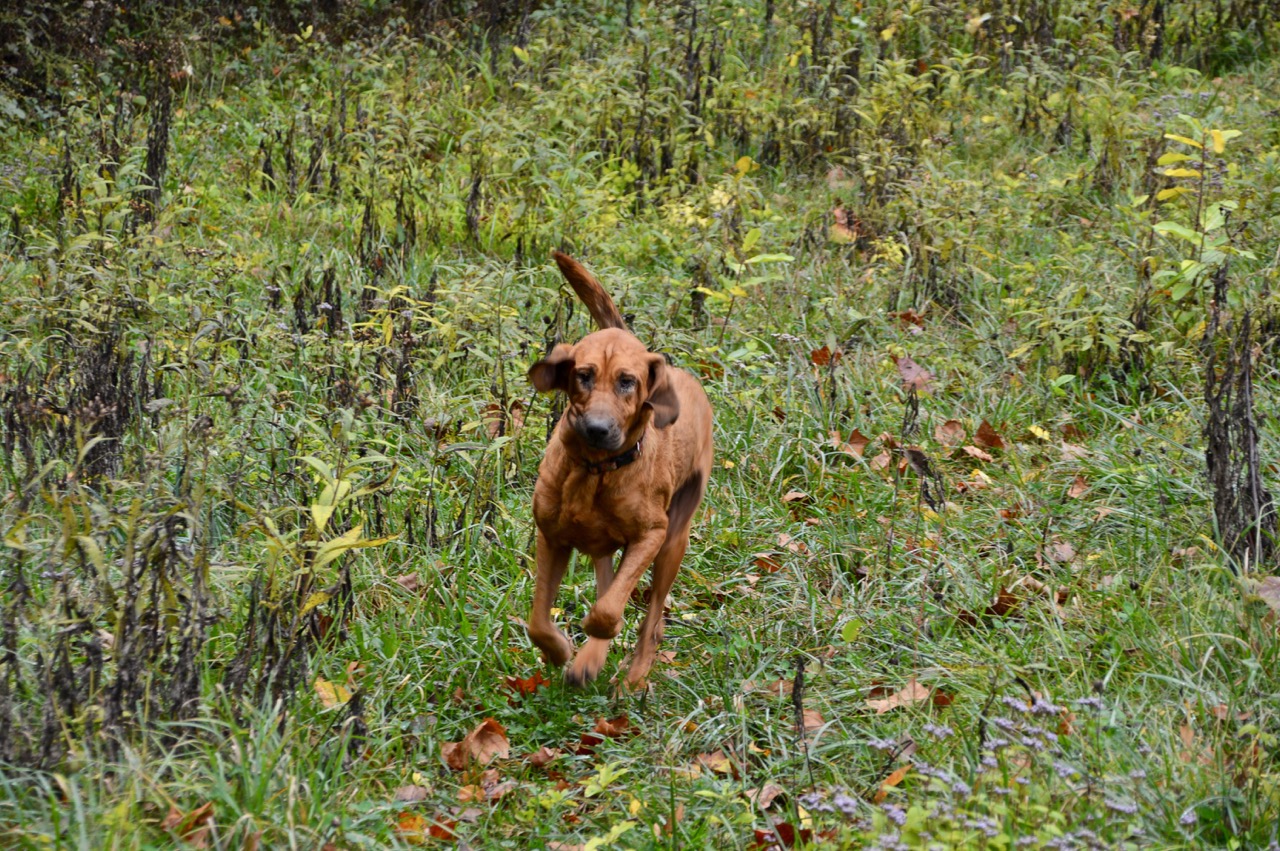 After ignoring Stella's invite to play inside, watching me put on the old green Sac State basketball cap, Sadie knows it's time for a walk when that hat is on my head ... along with the camera. She forgets about Stella and moves right into her exploration mode to track the latest deer scent. Stella may have started running our way when she started her walk but her nose once again took over and she wanted to take her own path ... with the direction she was headed I could tell "some herding" was going to needed. As I continued to yell her name and saying "over here" ... she slowly gravitated toward Sadie and I. She will always test me to see if she can sneak away. 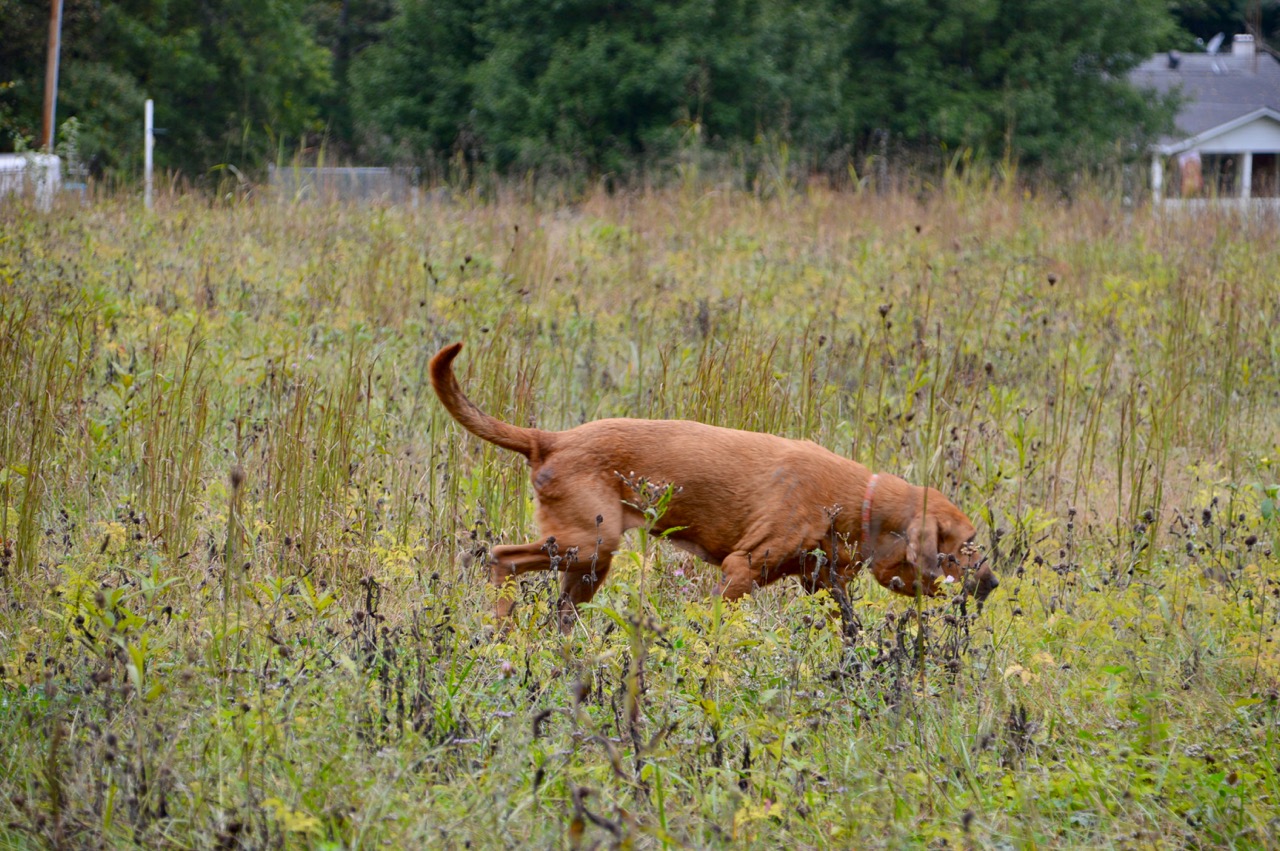 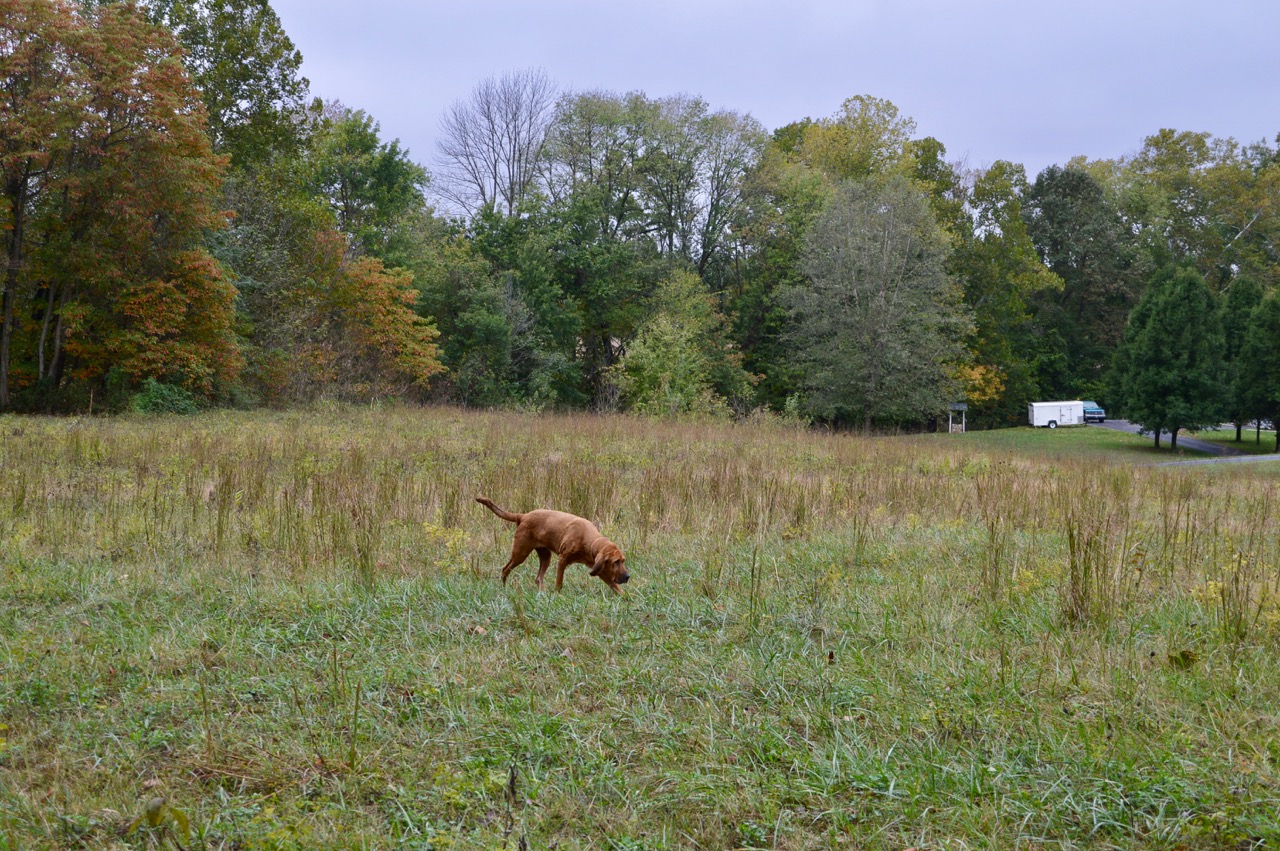 Once she decided she wasn't going to get her total freedom ... she SPRINTED past me and her and Sadie took off around the first turn. I was very very happy to see her running for the second time on this walk, only a 1/4 of the way complete. 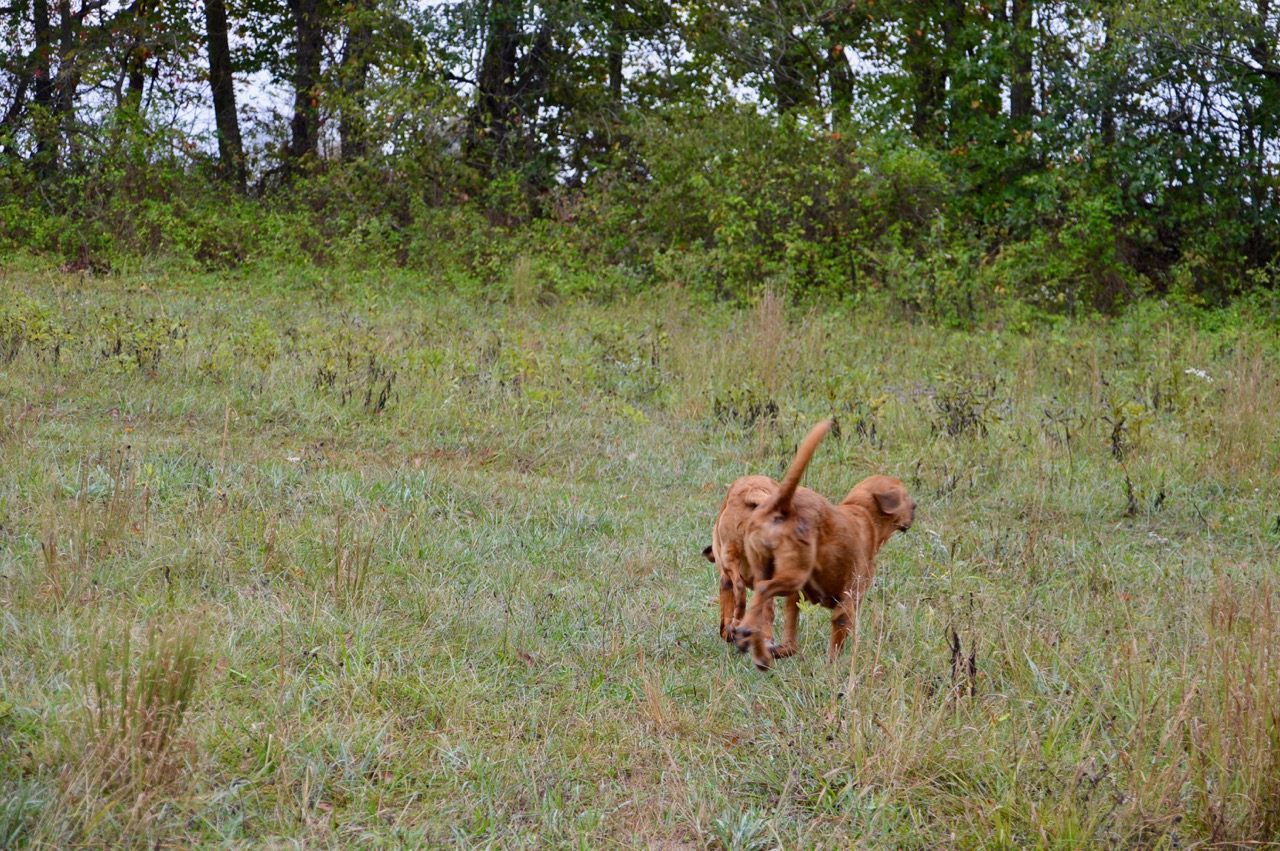 Most of the time they ran so close to each other as they explored, their bodies would bounce off one another in full stride. They might share the scent they track but that doesn't mean they don't try to get there first. 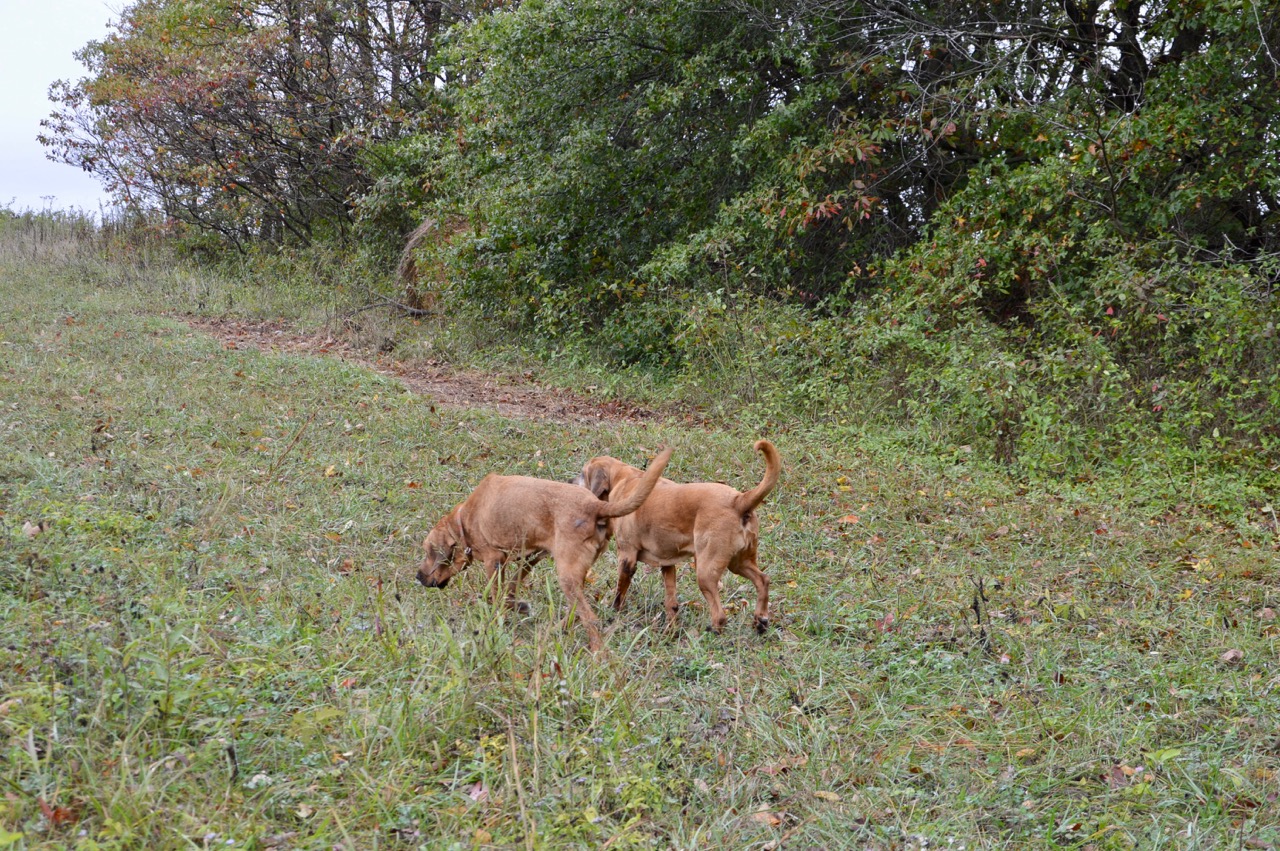 As we all approached the final turn toward home ... Stella jumped into Sadie's chest telling her she wanted to play. It was her 2nd attempt in less than 15 minutes. 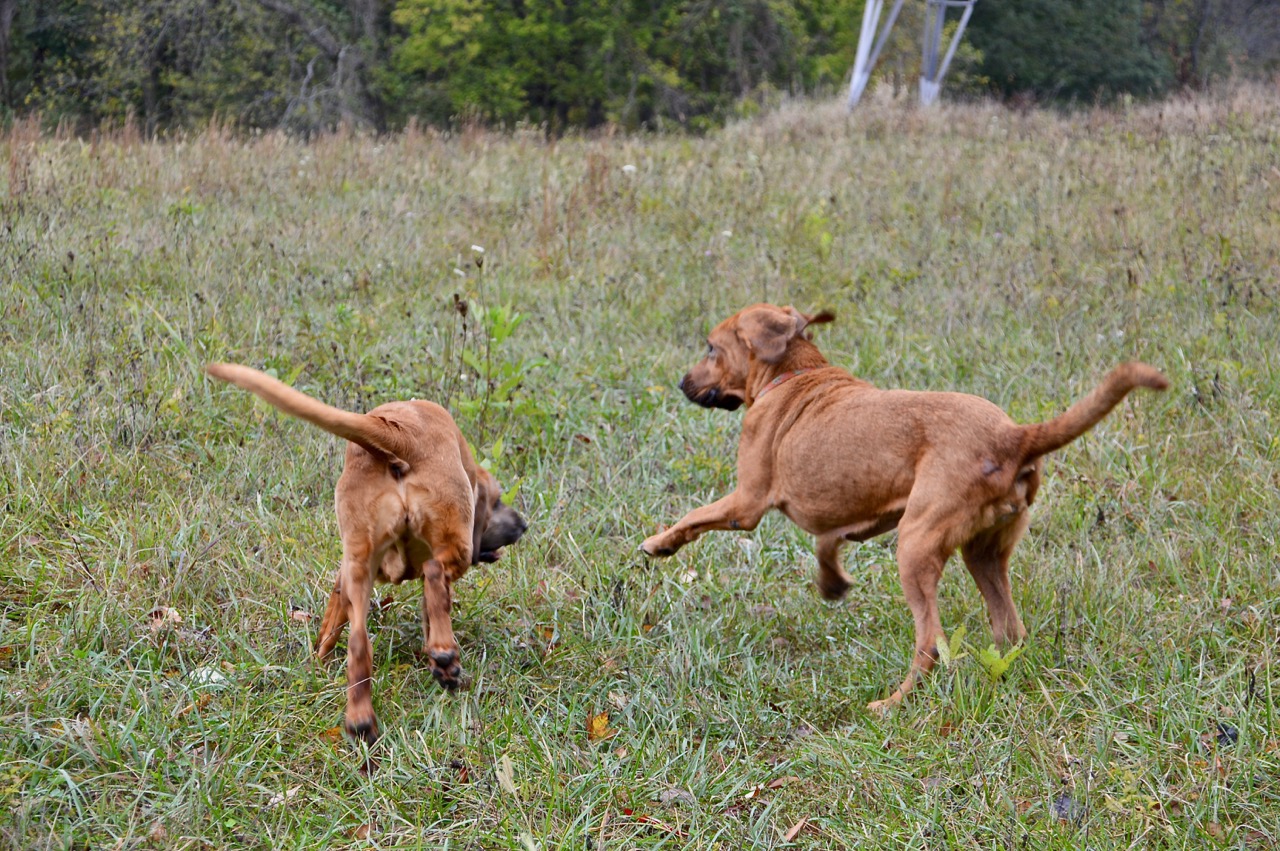 For the 2nd time since Sunday Stella was back to playing/wrestling ... something she had not done since last January. 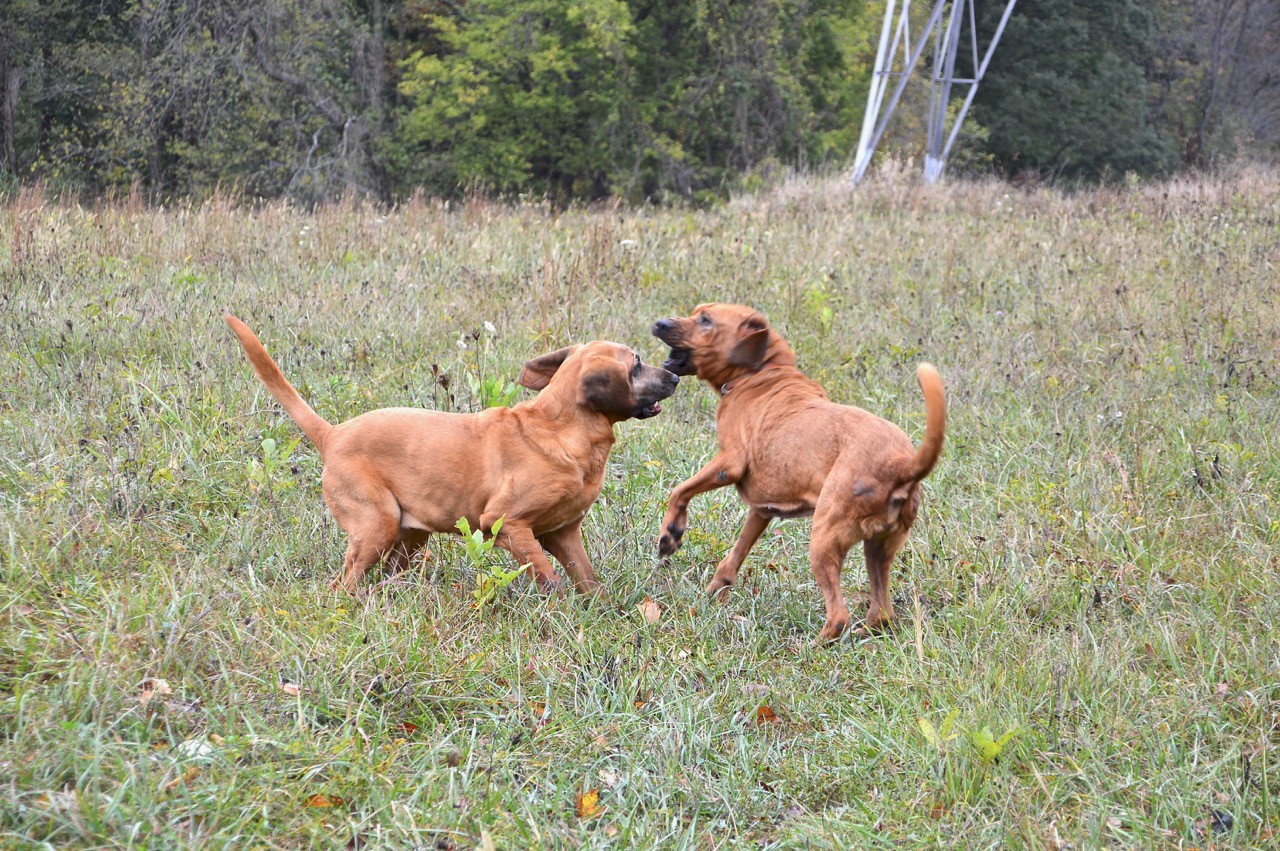 They always stop immediately to look just like this when they play. There is nothing to see or hear in that direction because its the same pose they do in the backyard when they wrestle ... it's just a move by each trying to get the advantage with their next wrestling move. 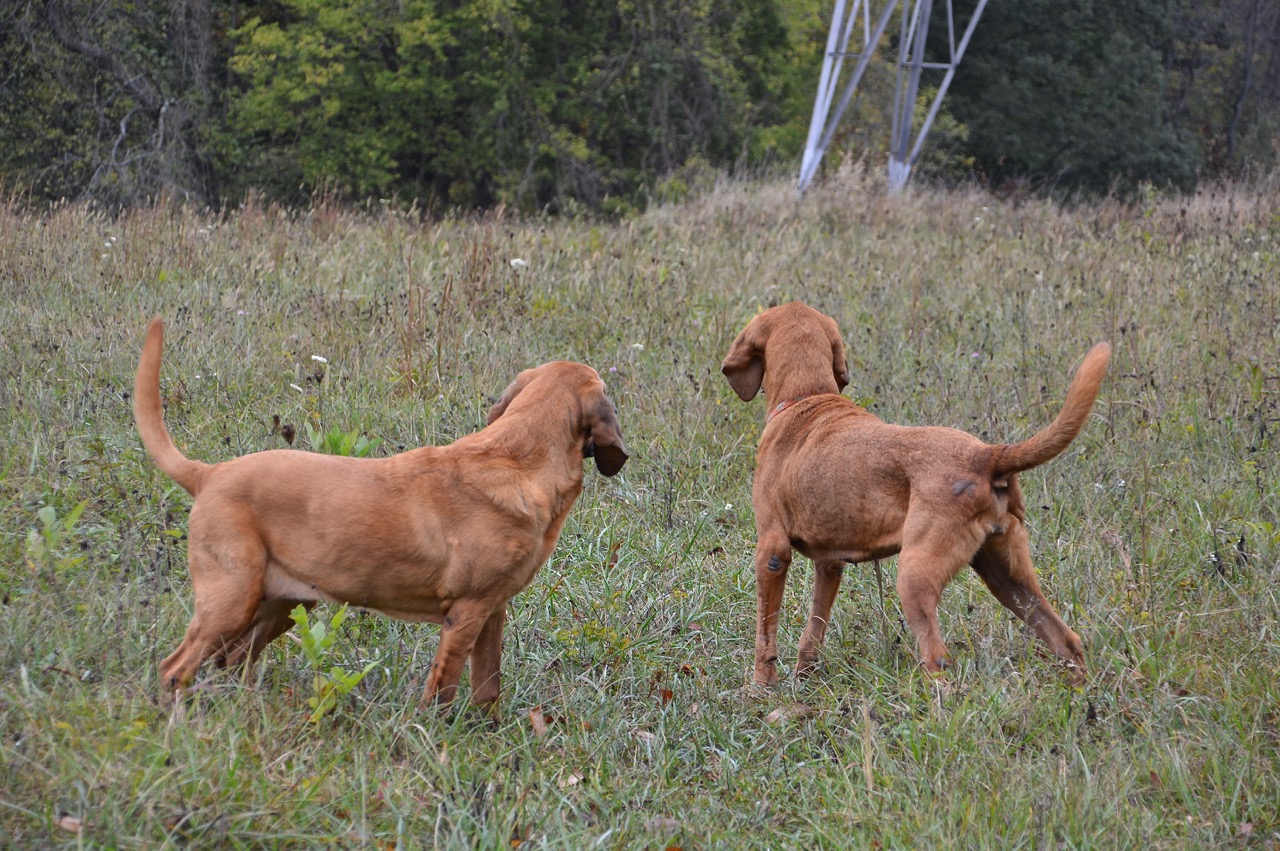 Just as quick as they stopped ... they started playing again. 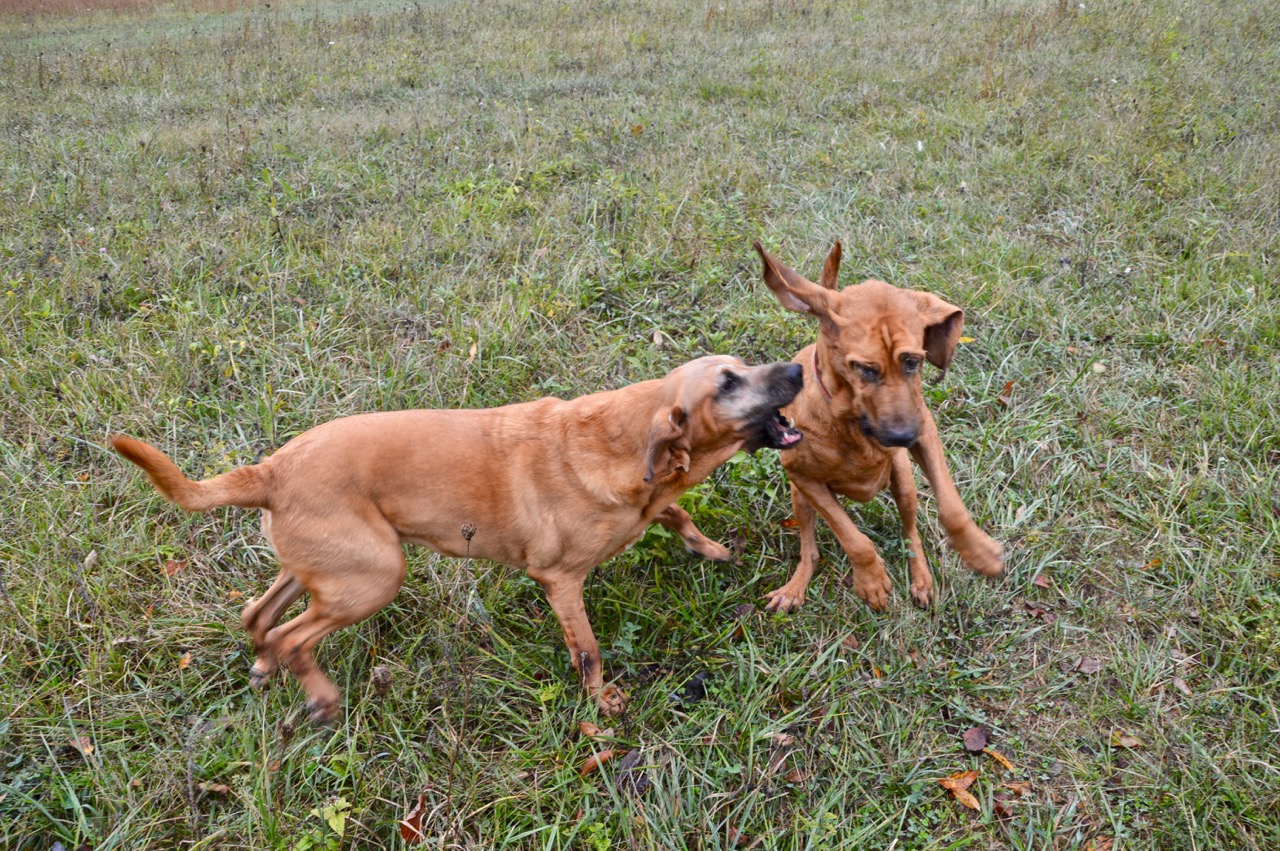 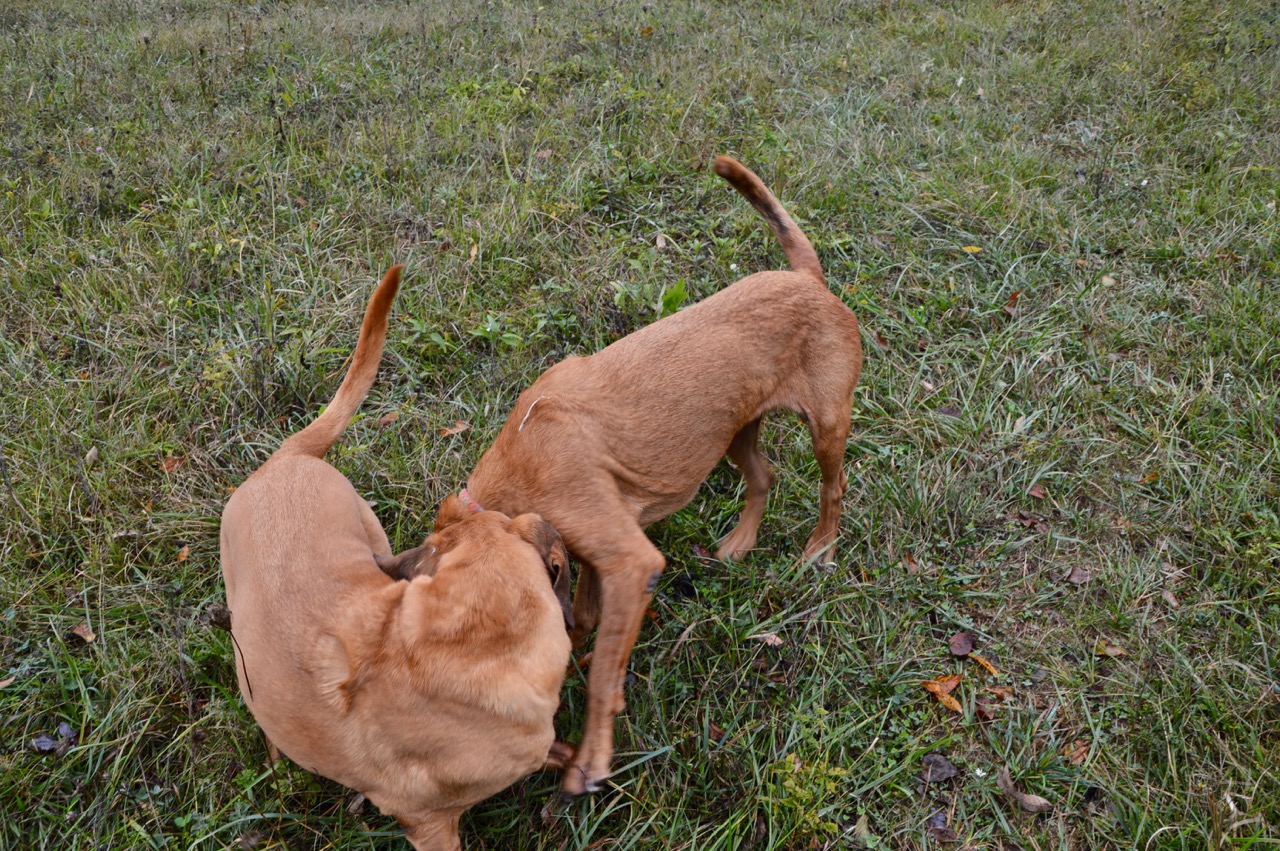 Then it was the sudden stop stare down ... letting each one know that the match was over and they had other stuff to do. 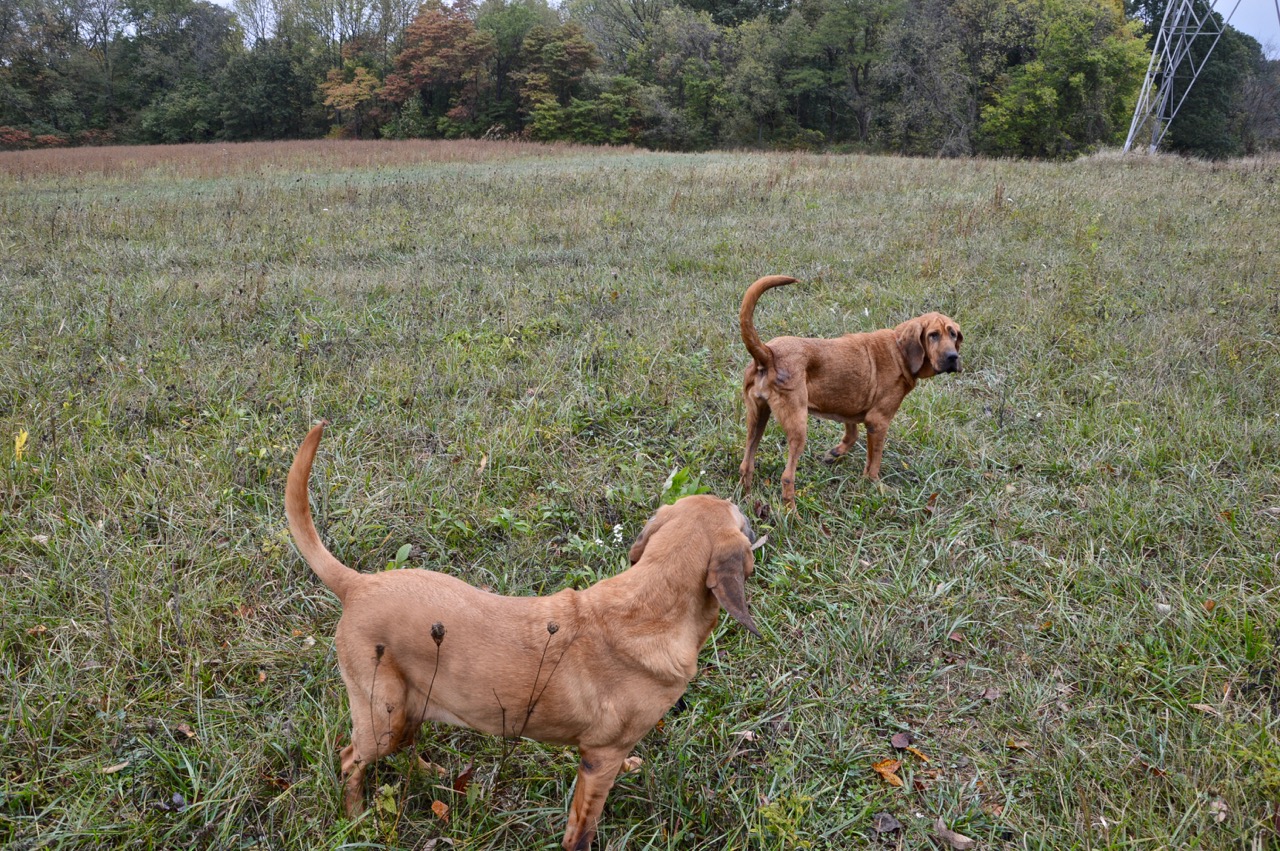 Off they went ... again happy to see Stella running fast enough that both of her rear legs are off the ground. 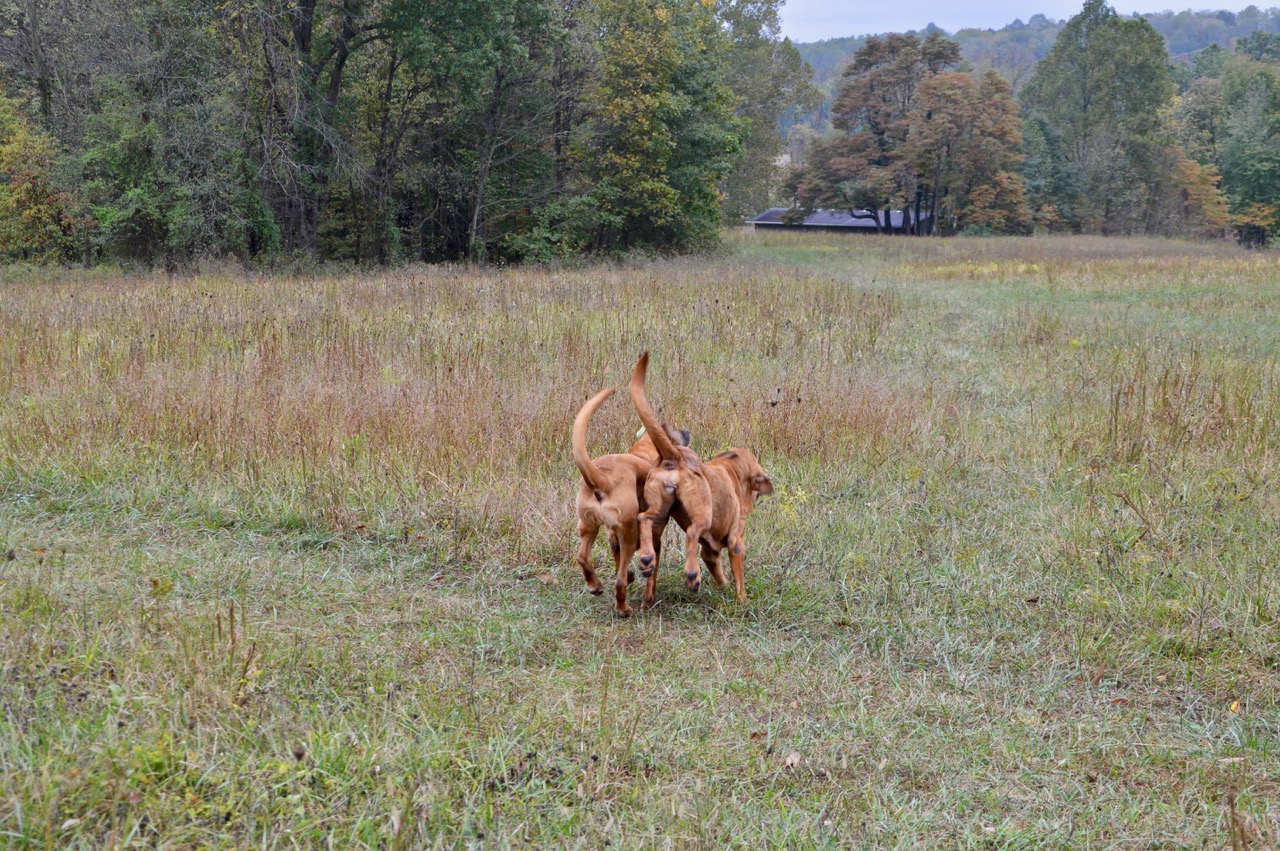 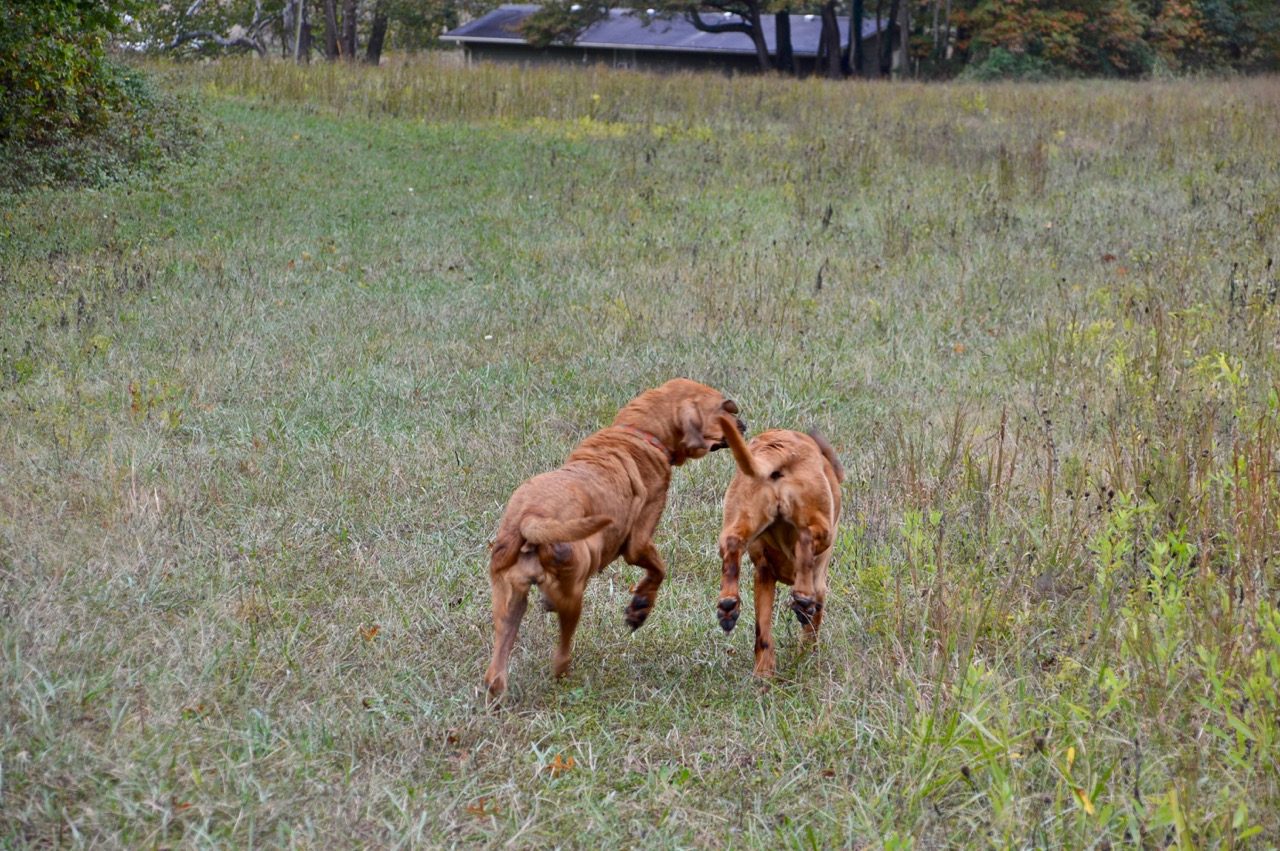 A good example of running so close to each other they bounce off of each other in full stride. 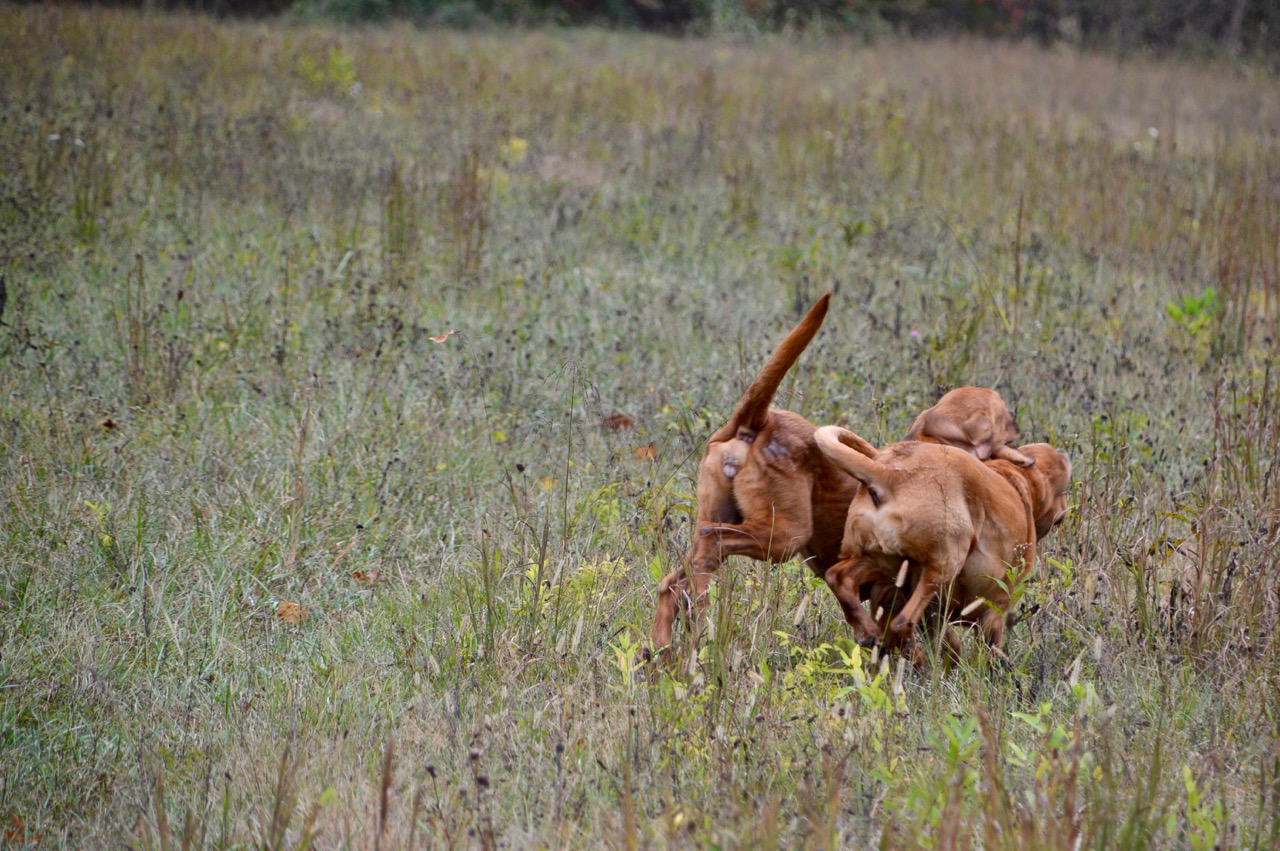 Tuesday night I had a call from my old friend that is semi-retired ... he had been spending the past month configuring his trailer from carrying two canoes to the original Laser sailboat. He is selling both and had the trailer finished but was needing one more person to help him lift the 135# sailboat up onto the trailer. His wife was busy with work ... his son that lives in town is even busier with a job plus bicycle racing and he thought I was too busy watching MLB Playoffs, College and NFL football that he ask me. I offered to help and I had an 'itch' for some kind of road trip. 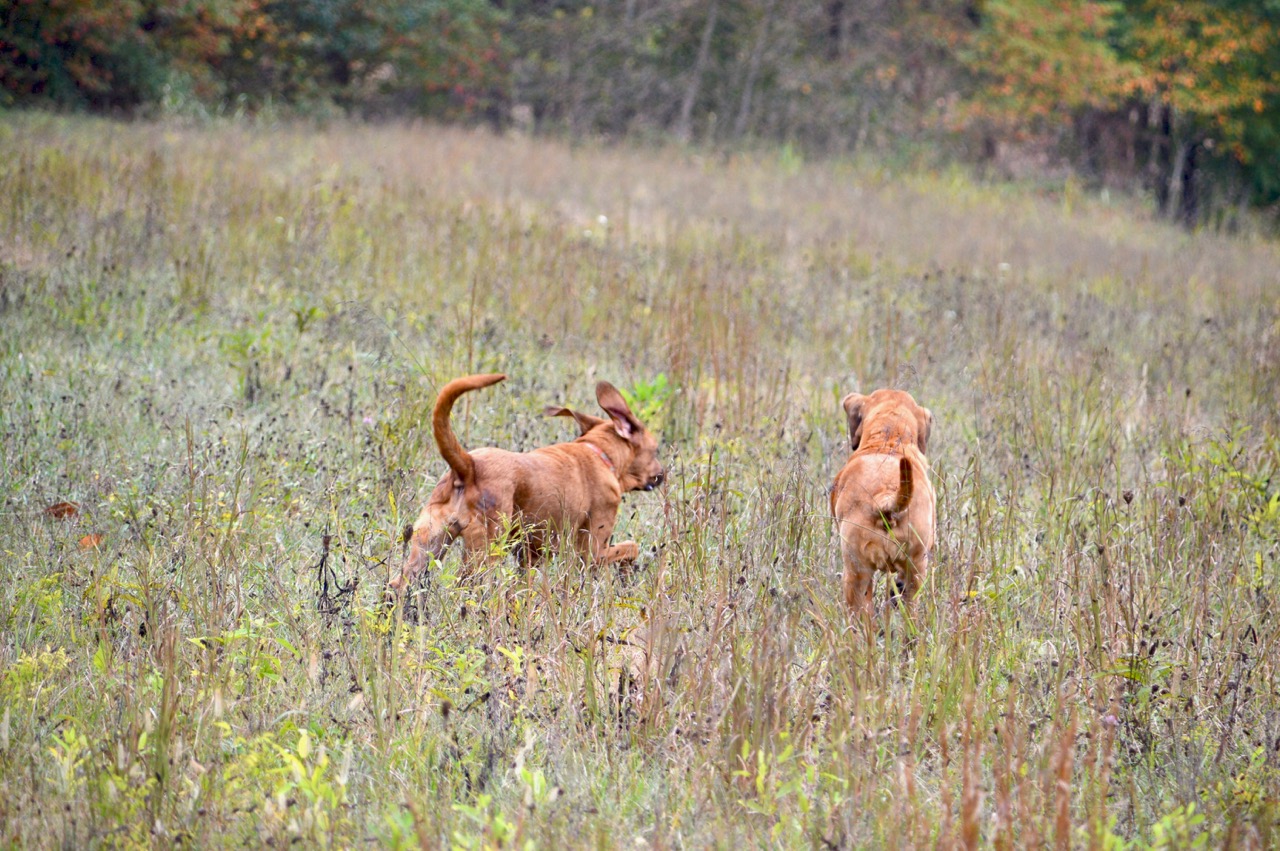 So I was planning to take off for his house around noon yesterday. I had these photos for the blog but no electrical power at the house due the utility company's repair work. The FJ needed a good road trip going the same distance and place my Z4 did at the end of September. I was hopeful I could return without having a plastic grill dragging the ground. (joke) 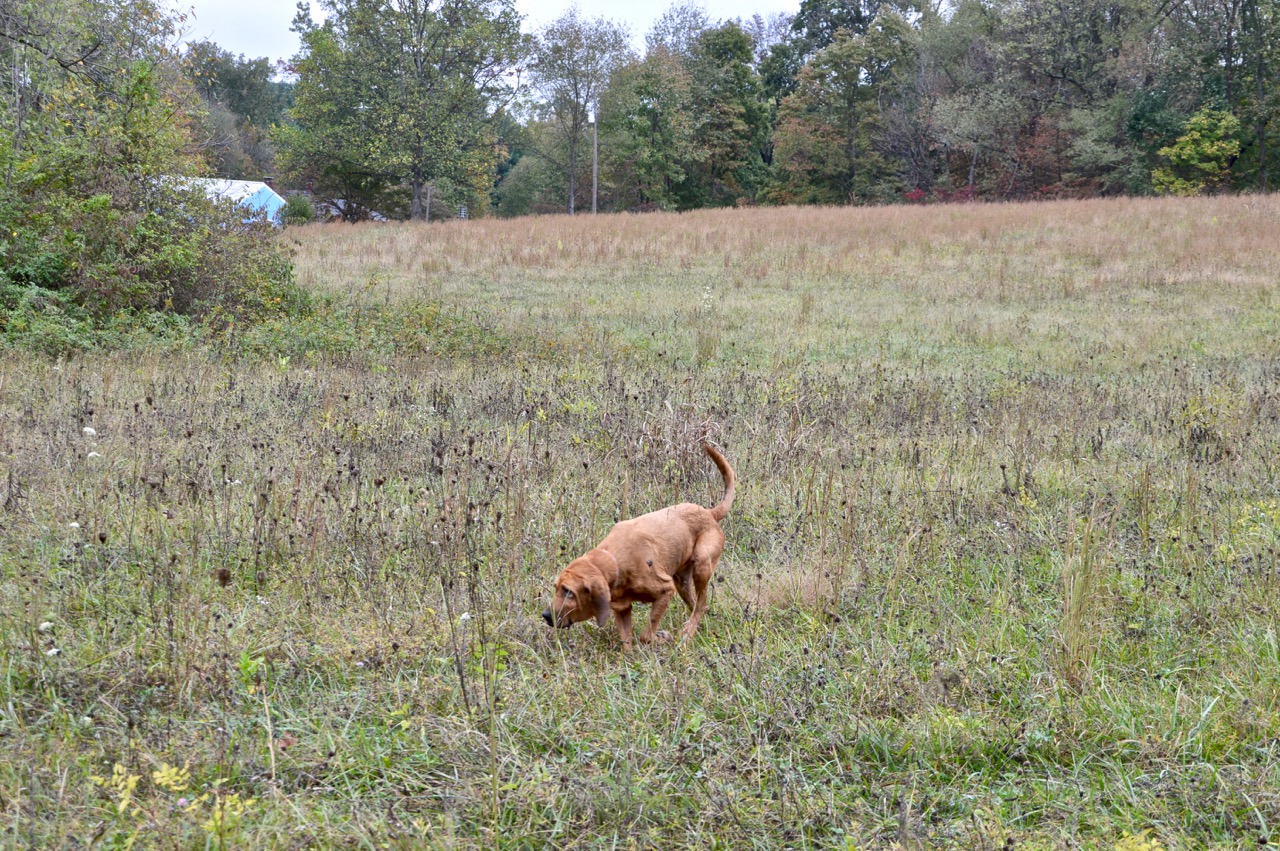 It was also another chance for Stella to show me that she was completely over her separation anxiety since I was gone for a solid 9 hours. It's been since December of last year since since she has done any damage while being shut up with Sadie in the bedroom. As I explained in November 2015, that room is the only room in the house that I have the least amount of things that she could damage and all of it could be repaired. Any other room has items I own that if damaged, would not be repairable but would need replaced, bought again. 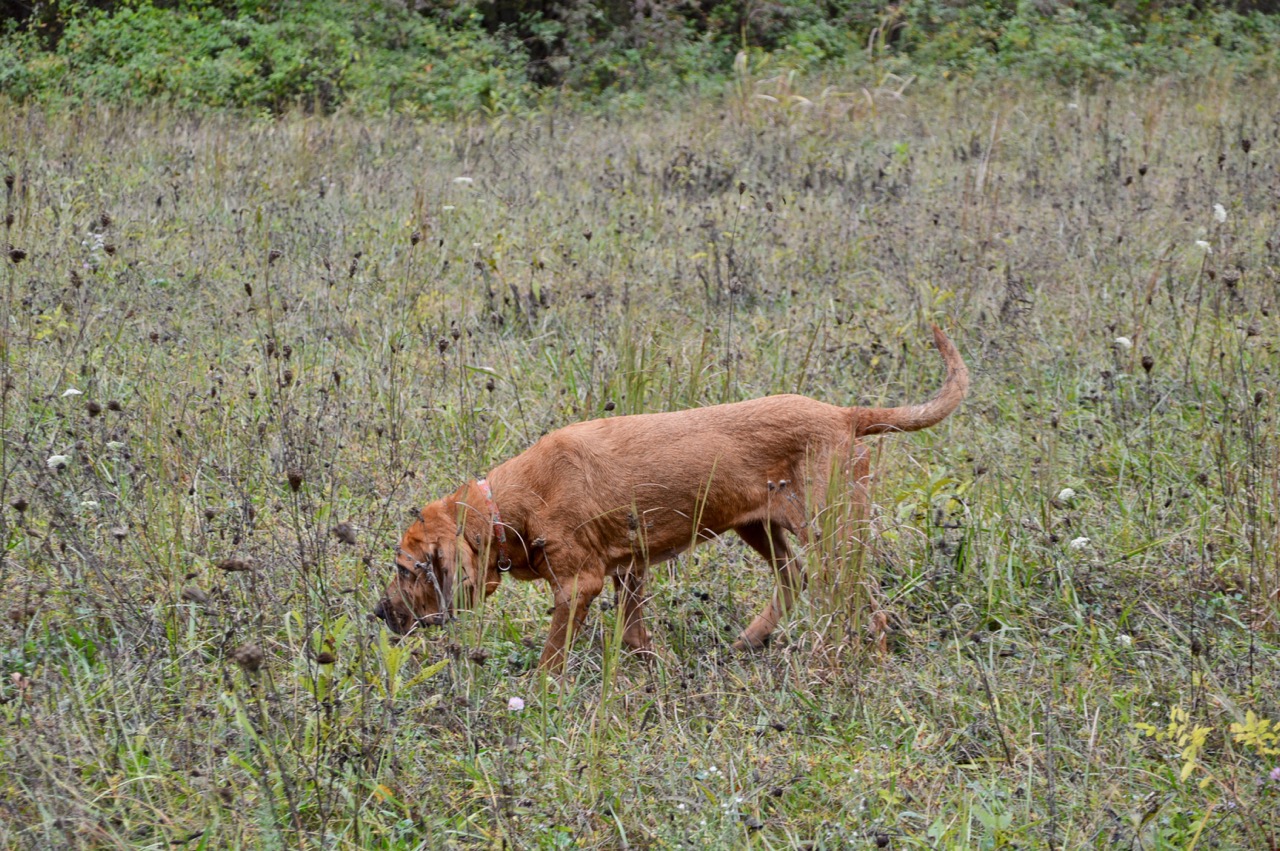 Just like two weeks ago she did fantastic, nothing chewed up, no window screens tore out (windows were shut closed), no digging through drywall, and no moving the bed and furniture around so she could climb up on and crawl out the small window.

Yes ... she did try moving furniture and climbing on top of the bed or end table so she would be at the same height as the small windows for her escape. She didn't escape that time, her first time where I was gone over 8 hours in November 2015 only 3 months after she arrived here.

The surprise for the hounds that I mentioned above was due to my mental short-ciruit. With their excited routine when I returned home, it's was the same routine they have when they are hungry and they are wanting lunch. I did not remember that I had already fed them lunch before I left, sometime around 11:30am. So just as I sat the 3 bowls of kibble down in front of each of them ... different areas of the room ... it dawned on me they had already had their normal two meals ... this would make their third of the day. Living proof they could eat forever if 'free fed' ... all dog kibble was gone in less than a minute.

With only one MLB game, winner take all to move to the next round, tonight at 8pm ... I have some time today to finally do a little house cleaning and post here later tonight of the pictures of the hounds I am about to take on our first walk of the day.

Again ... I'm sorry for those emails sent automatically with each old post that I added to this blog. I would not be happy seeing 56 new emails in my inbox all from the same sender.

It's cold enough for shorts and a sweatshirt on the walk this morning in 'the tropics' of Southern Indiana.
at October 12, 2017