A Rough And Humorous Start Today 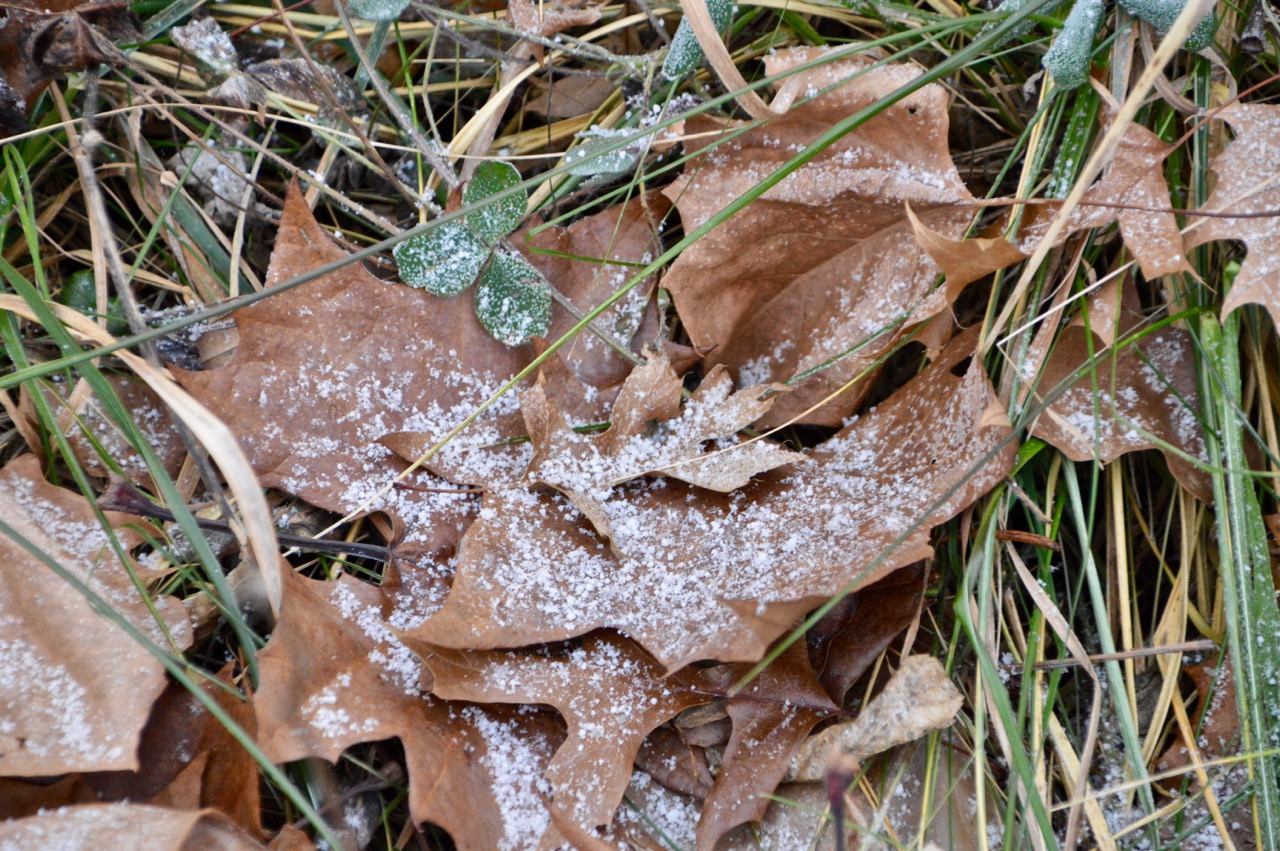 It's trying it's best to snow as forecasted but without much success. Here in 'the tropics' we are in kind of a 'pocket' where storms follow the I-70 corridor north of us and the Ohio River south of us. Radar may show we are about to get blasted with snow storms, thunderstorms or even tornadoes but they always seem to split at the Indiana /Illinois state line and follow those two routes or move around us within miles.
I haven't been up 2 hours yet and already there seems to be a feel that something is off today. Years ago when the fad of biorhythms were telling the us why we felt the way we do, it would be what they called "a critical" day for me today ... I just call it being grumpy and it's always caused by too much sleep. I work well with 3-4 hours of sleep but I am hard to live with when I get 7 or more hours of sleep.
Today I can feel I am hard to live with. 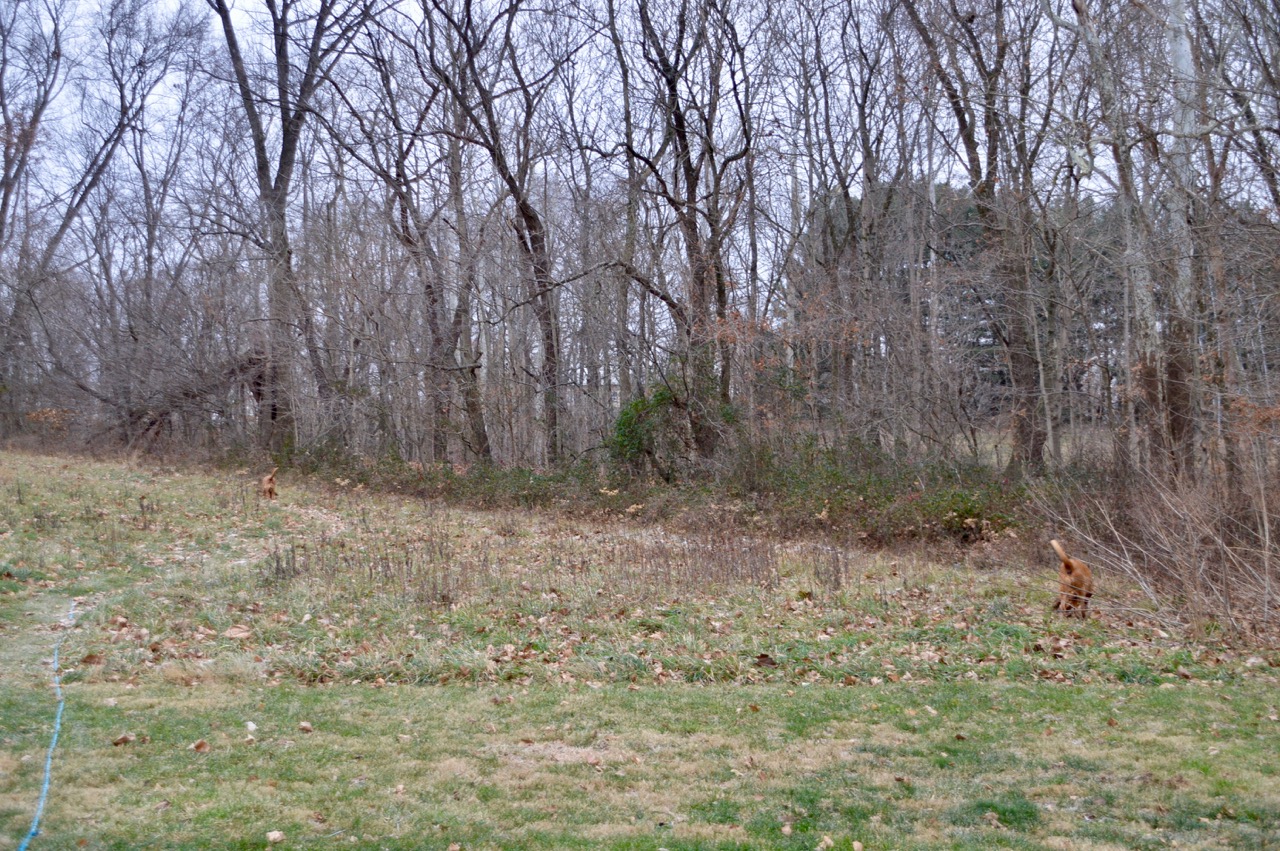 Yet, it might not have been too much sleep that started this 'off day' ... it could have been when Sadie was sprinting for the door as I let them out for the first time of the day within minutes of waking up. She ran into the back of my left knee causing me to fall and stumble as I caught myself before hitting the floor or running into the door head first ... that should give you a good idea.  LOL

Or it could have been 5 minutes later, where the same hound is so excited about her breakfast, as usual, and tips over a 3qt bowl of water when her paw came down on the edge of the bowl as she was hopping up and down. Nothing worse than having unexpected water everywhere within 10 minutes after you wake up. I swear I watched that water move in slow motion as it hit me and almost the ceiling. 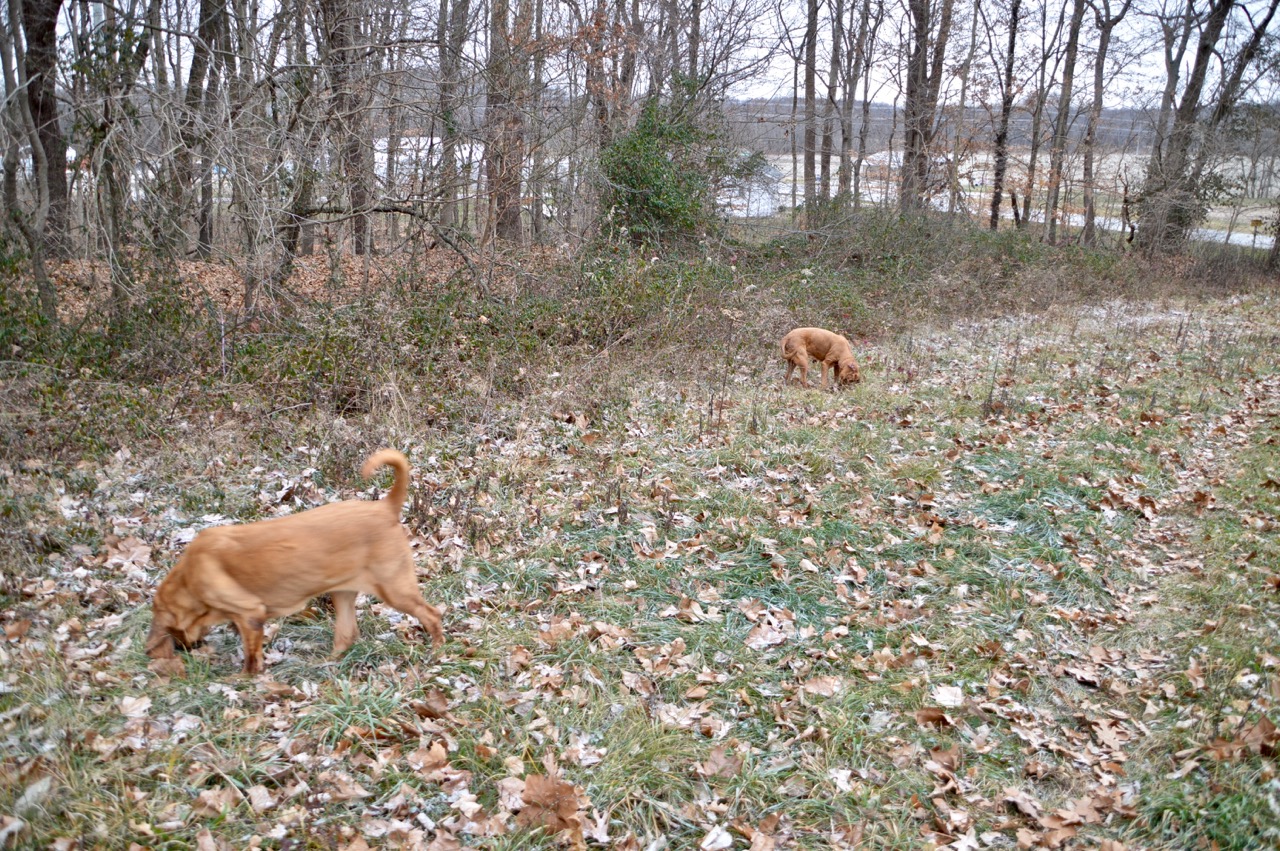 Needless to say, I needed a walk to 'cool off' because one cup of coffee had done nothing to change my outlook on life this morning. The weather apps said it was cold, it felt warm. It was suppose to snow but hadn't really. I could see that both hounds had their own agendas so they were going to get total freedom ... plus less chance of a 100# hound running full speed into me ... I had a feeling today wasn't meant to be my day, after my rough start. 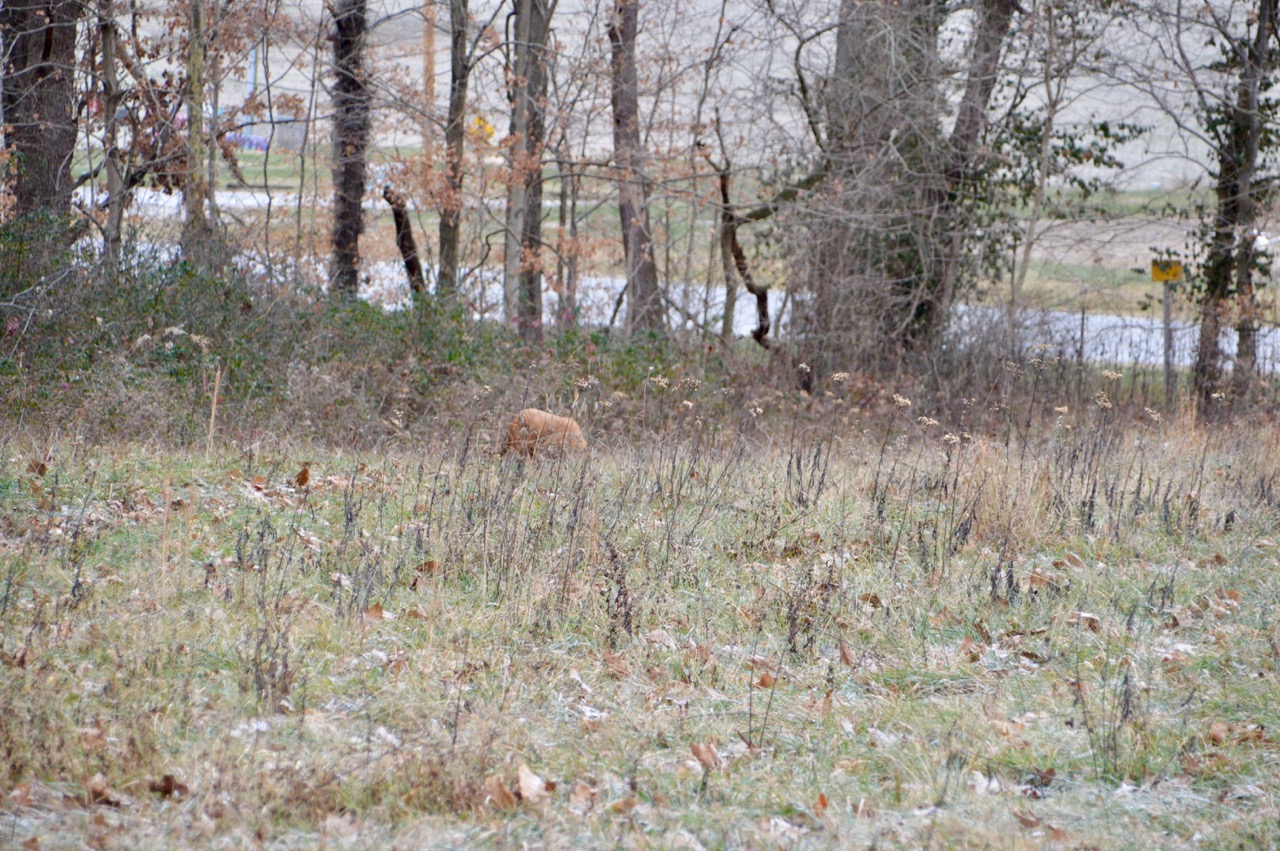 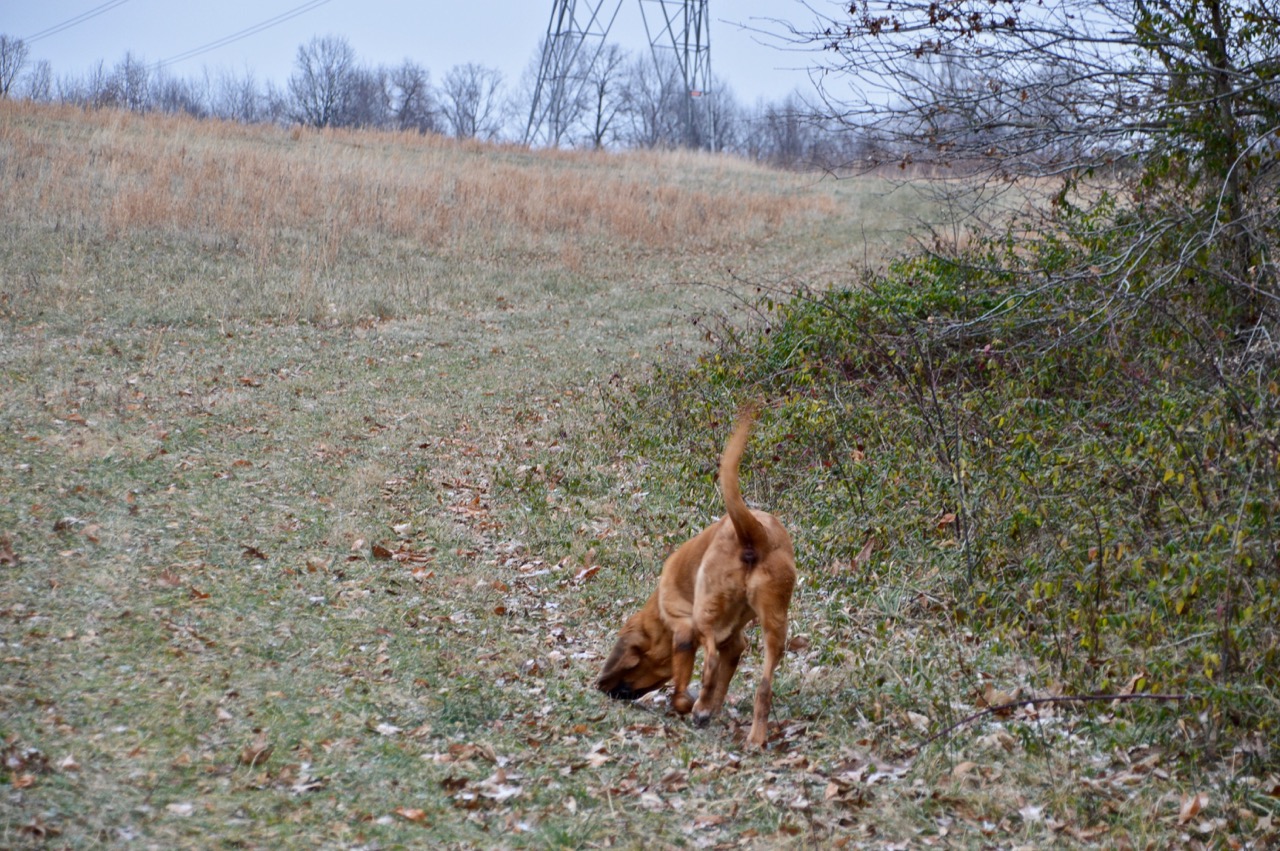 I could hear it but I couldn't see it. Even the camera couldn't see it. I could actually hear very small balls of snow hitting my jacket with my wool ski cap over my ears. When I glanced at my dark blue parka sleeve, it showed me I wasn't going insane today after all. It's always good to know that you haven't fallen over the edge of insanity ... but for some reason I could still feel water from Sadie's water bowl somewhere on me. 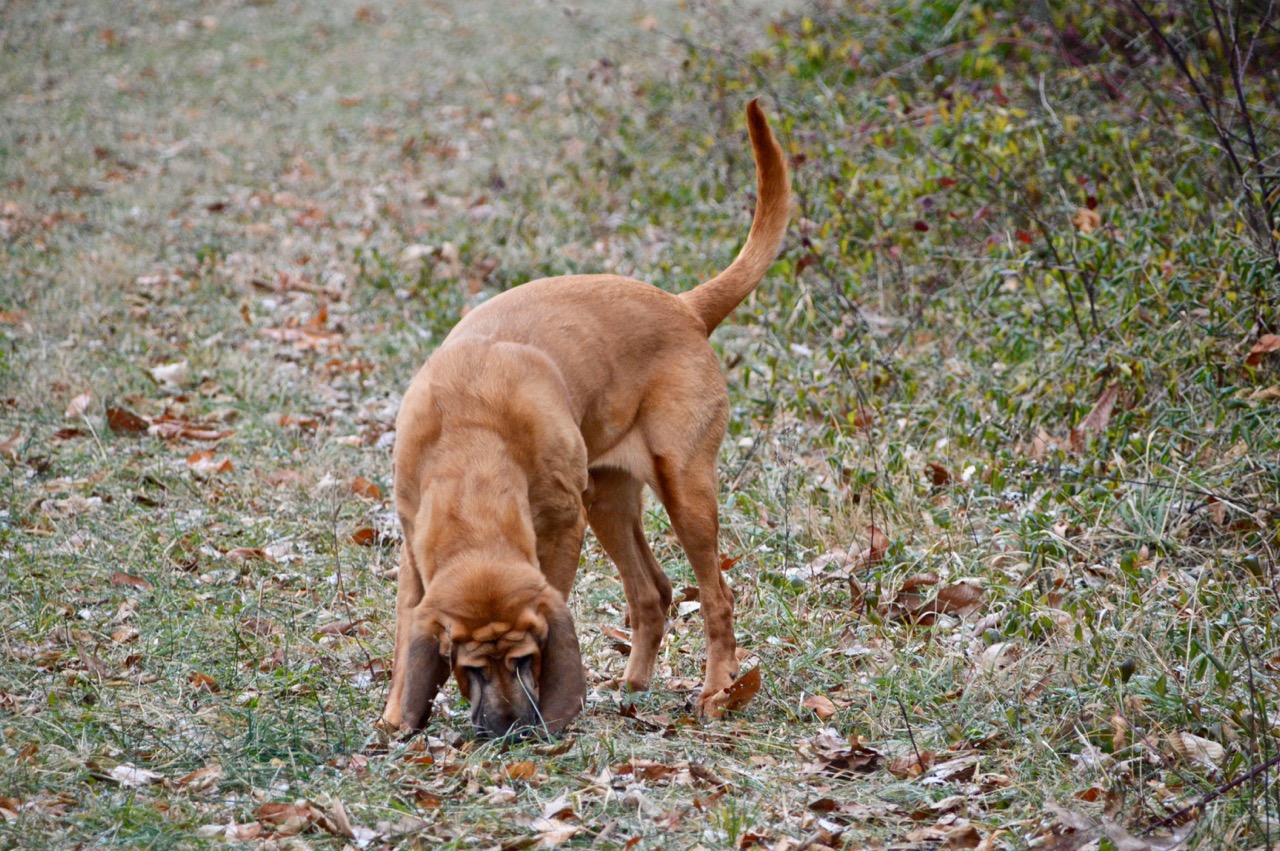 As usual she was oblivious to all that had happened this morning. If had not been in her way, she wouldn't have hit me in the back of the knee. If I would have moved the water bowl 6" away, she would not have hit the edge of it with her paws, sending her water out in slow motion as high as the ceiling.

So all was good to her ... she is outside on her walk and she is tracking scent. Nothing else matters. 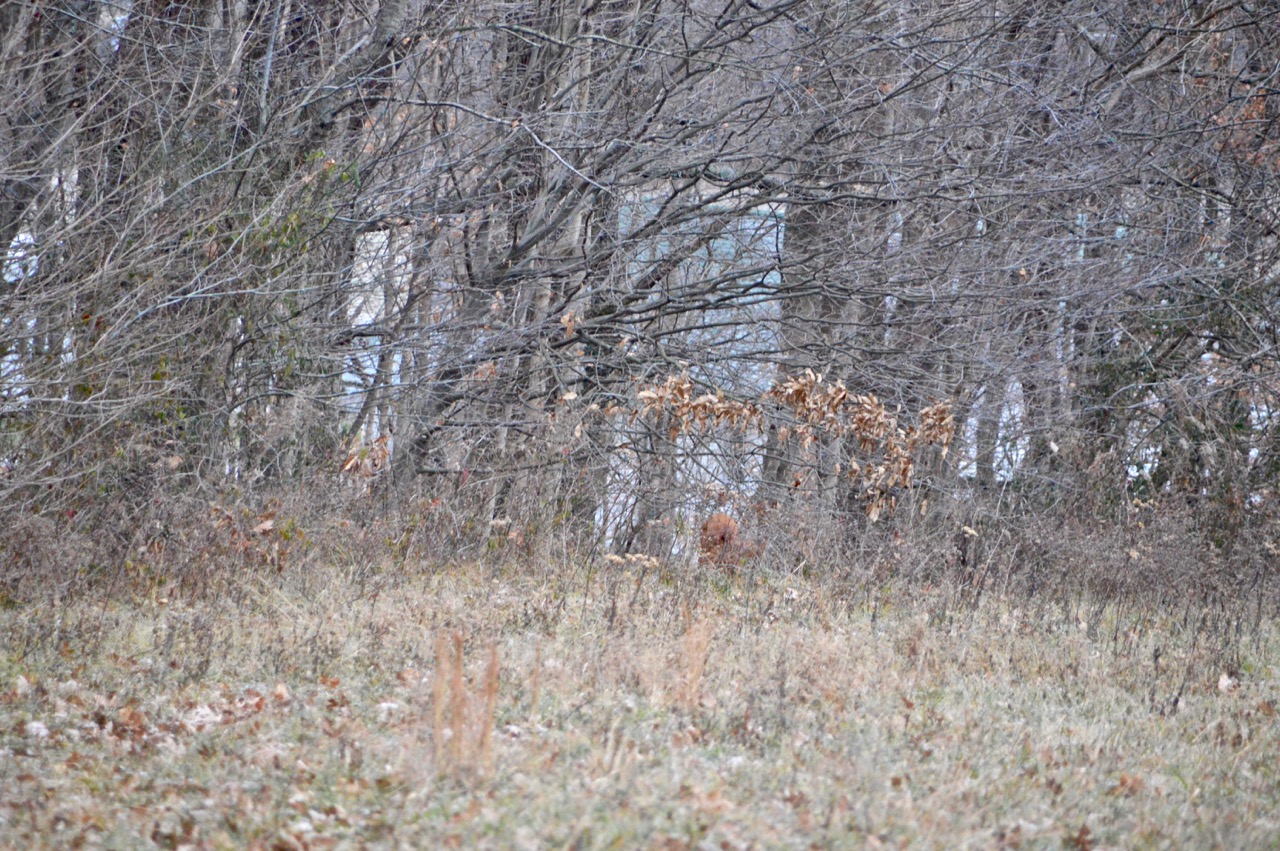 I turned to make one final look to see where Stella was as my camera lens, set at 200mm, picked her up walking INTO the wooded area ... I was certain she was going to disappear. 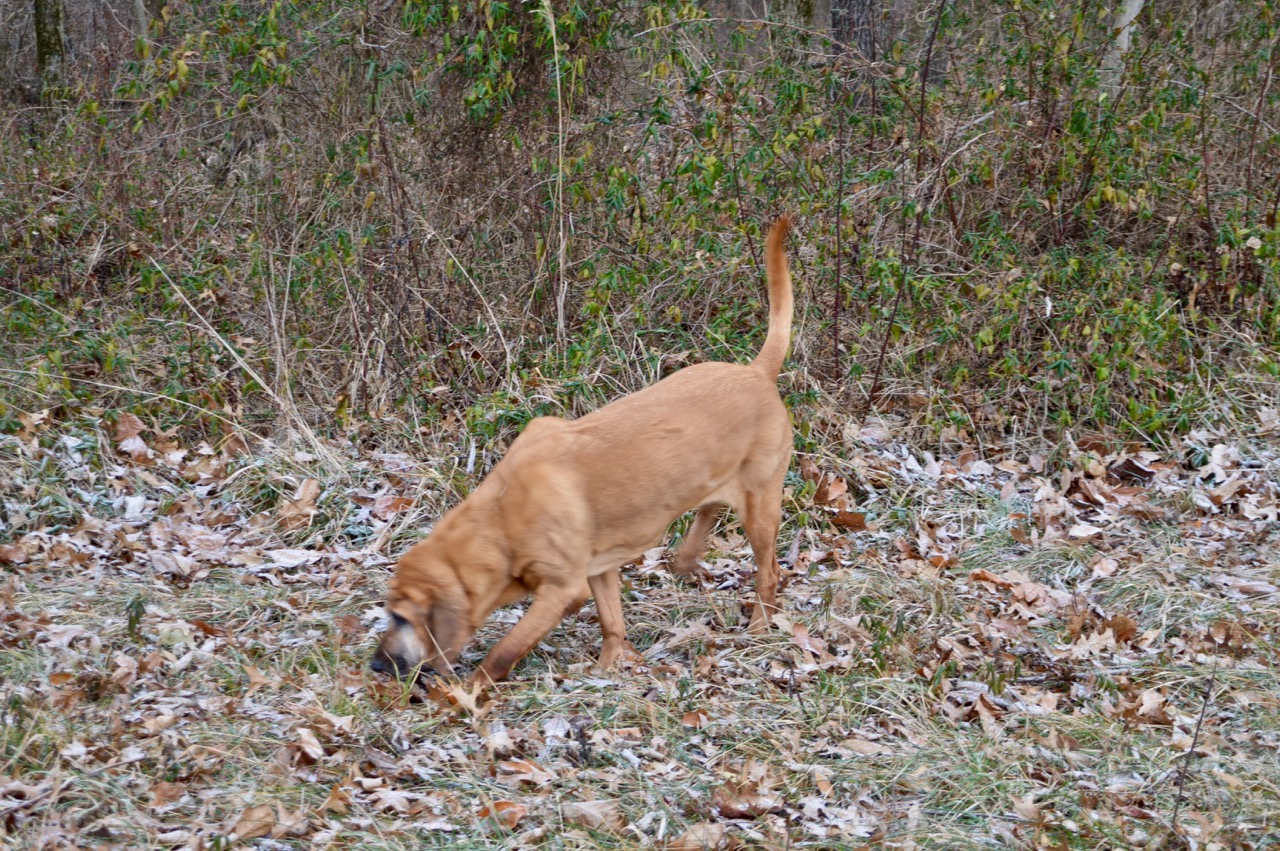 By now I am seeing snow flurries, and taking photos with it in the background in my view finder but not showing up on the photos. I could also see a little of it starting to stick to Sadie's coat. 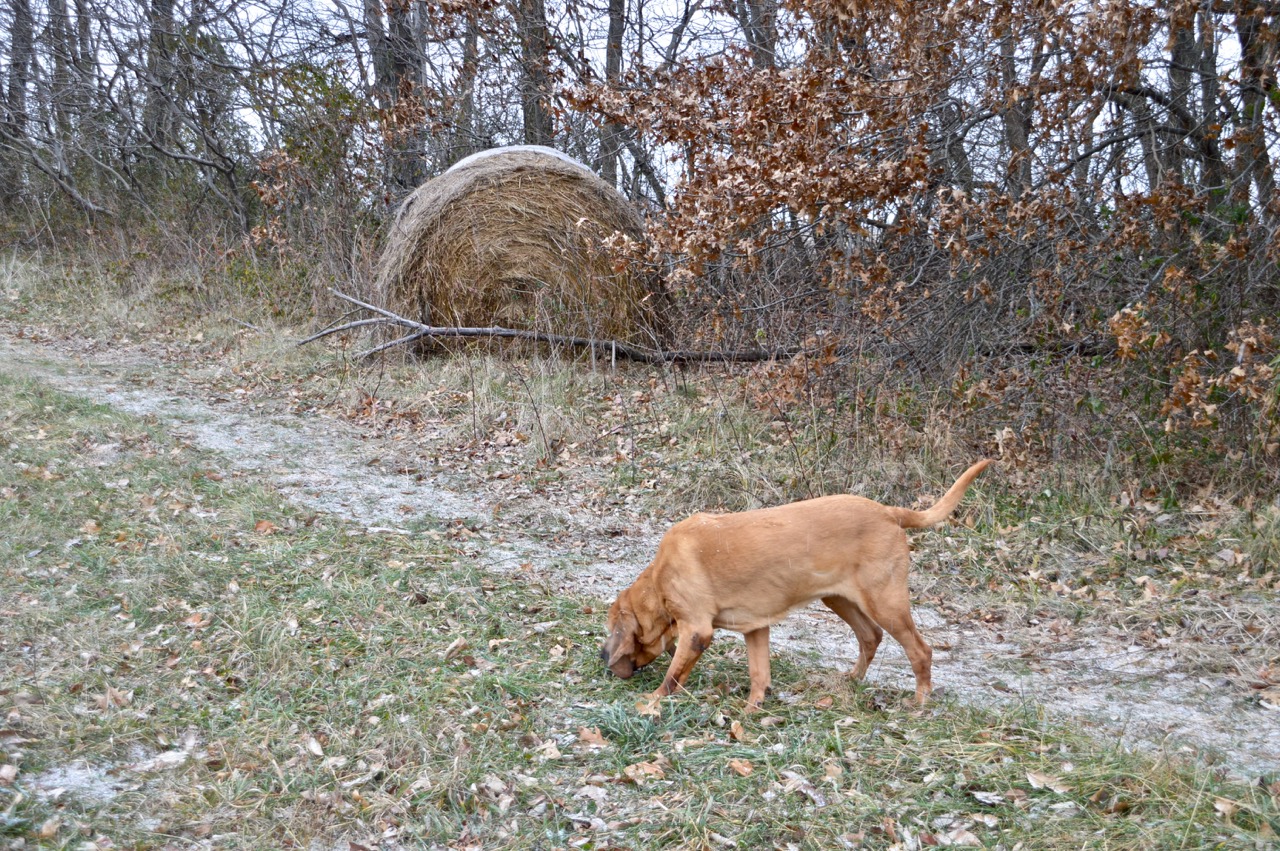 I don't mind cold temps as long as there is no wind. That makes a world of difference in how warm you feel. A little snow but nothing major. 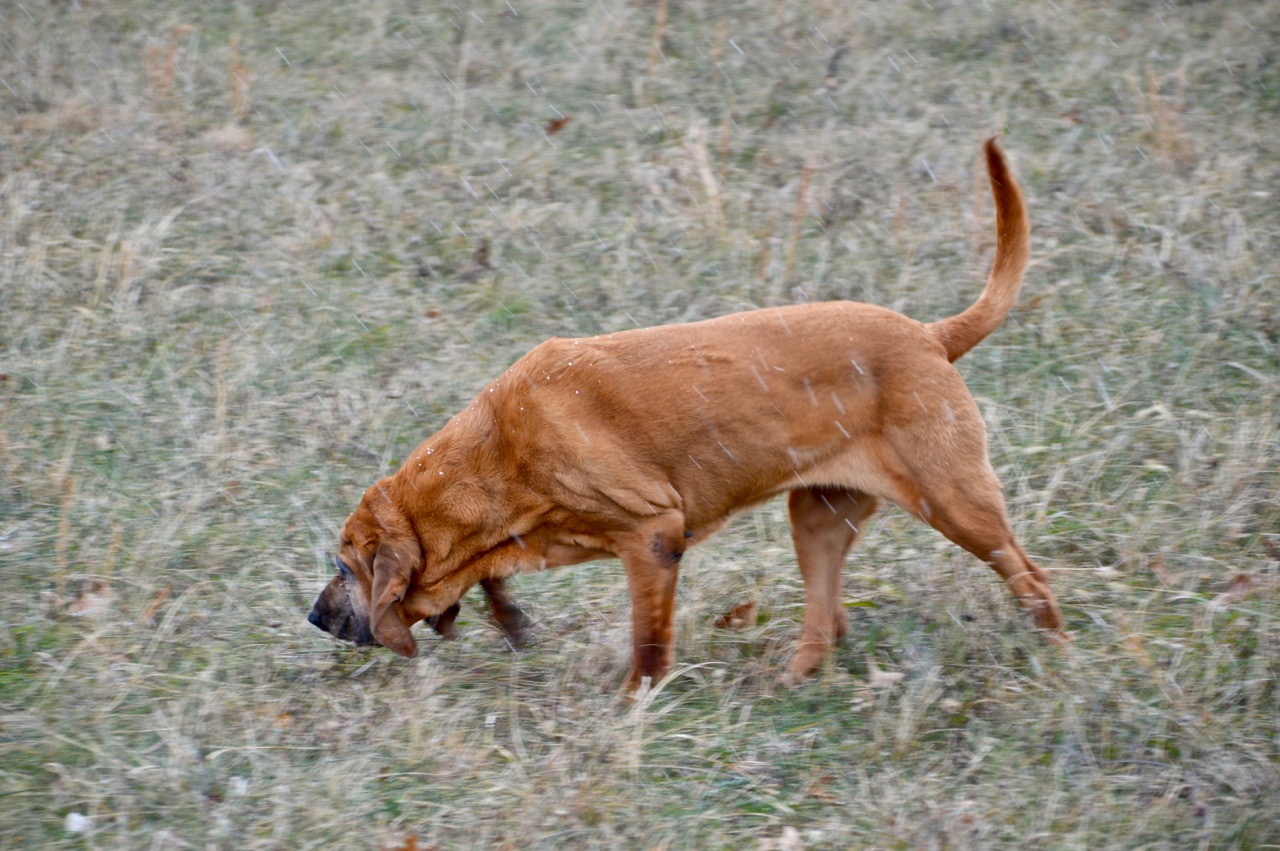 I can always tell when Sadie is really focused tracking scent because I can hear her jowls flapping with a noise that is hard to describe and one that only bloodhound owners can recognize. 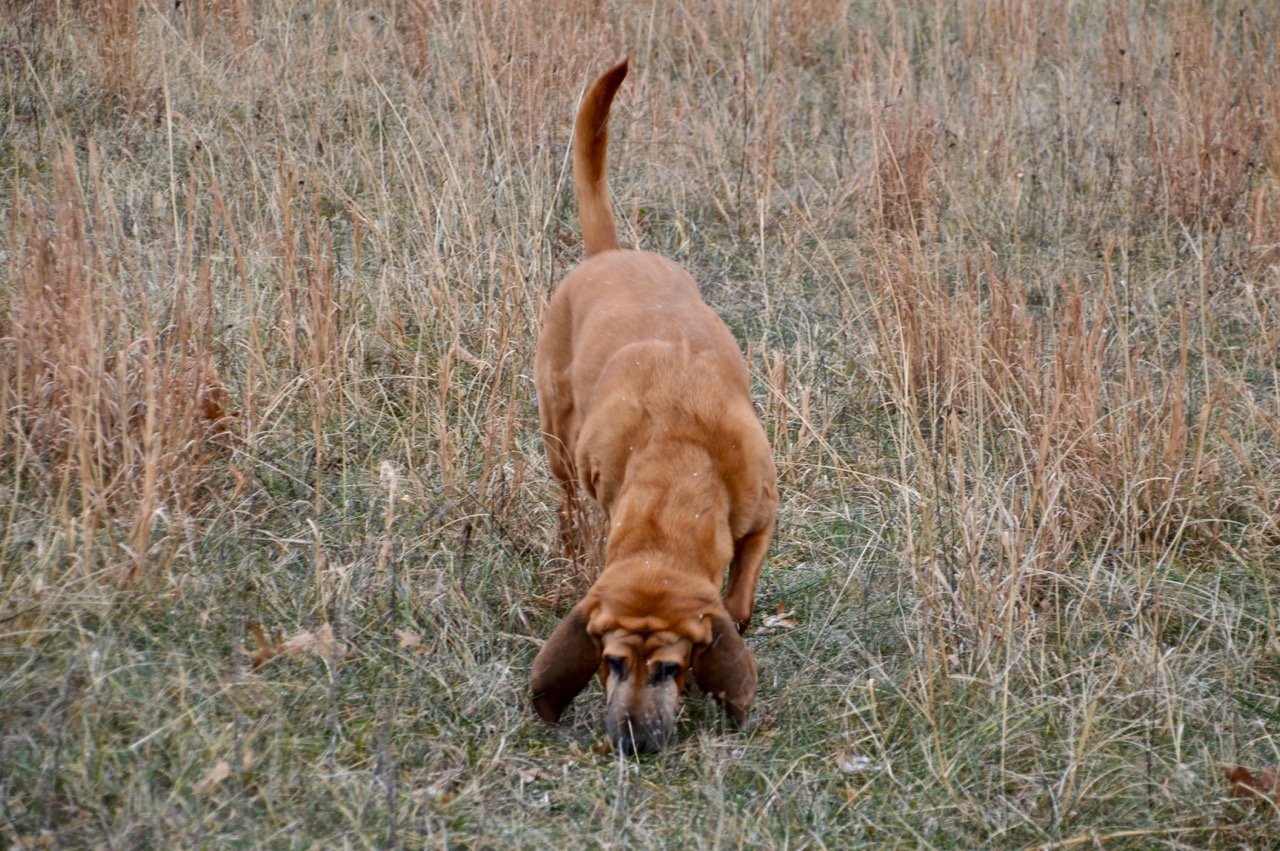 I would love to have an drone flying around this field taking photos 24/7 just to see the animal activity when we are not on our walks. 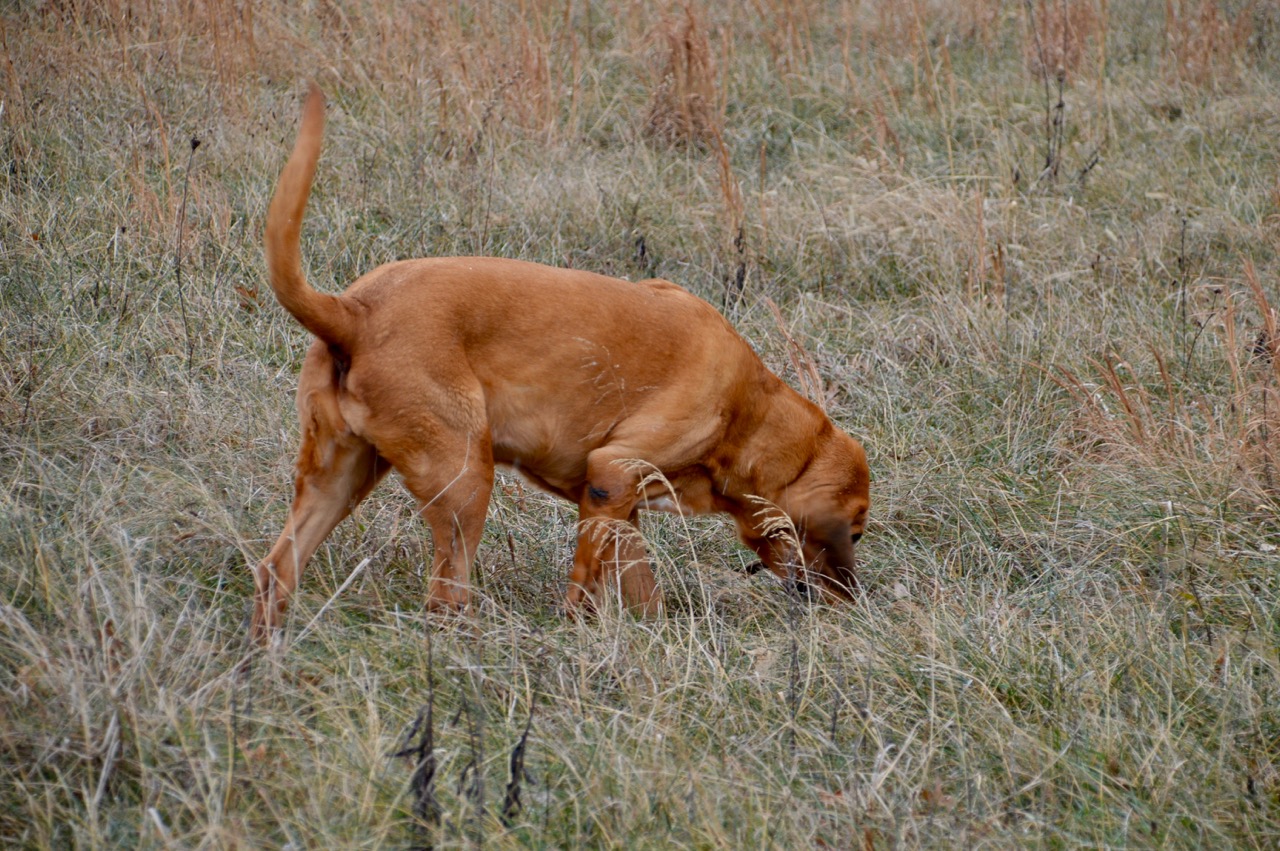 It was hard to get Sadie to leave but I told her "go find Stella" ... she took off running in the direction of the house with her nose to the ground. 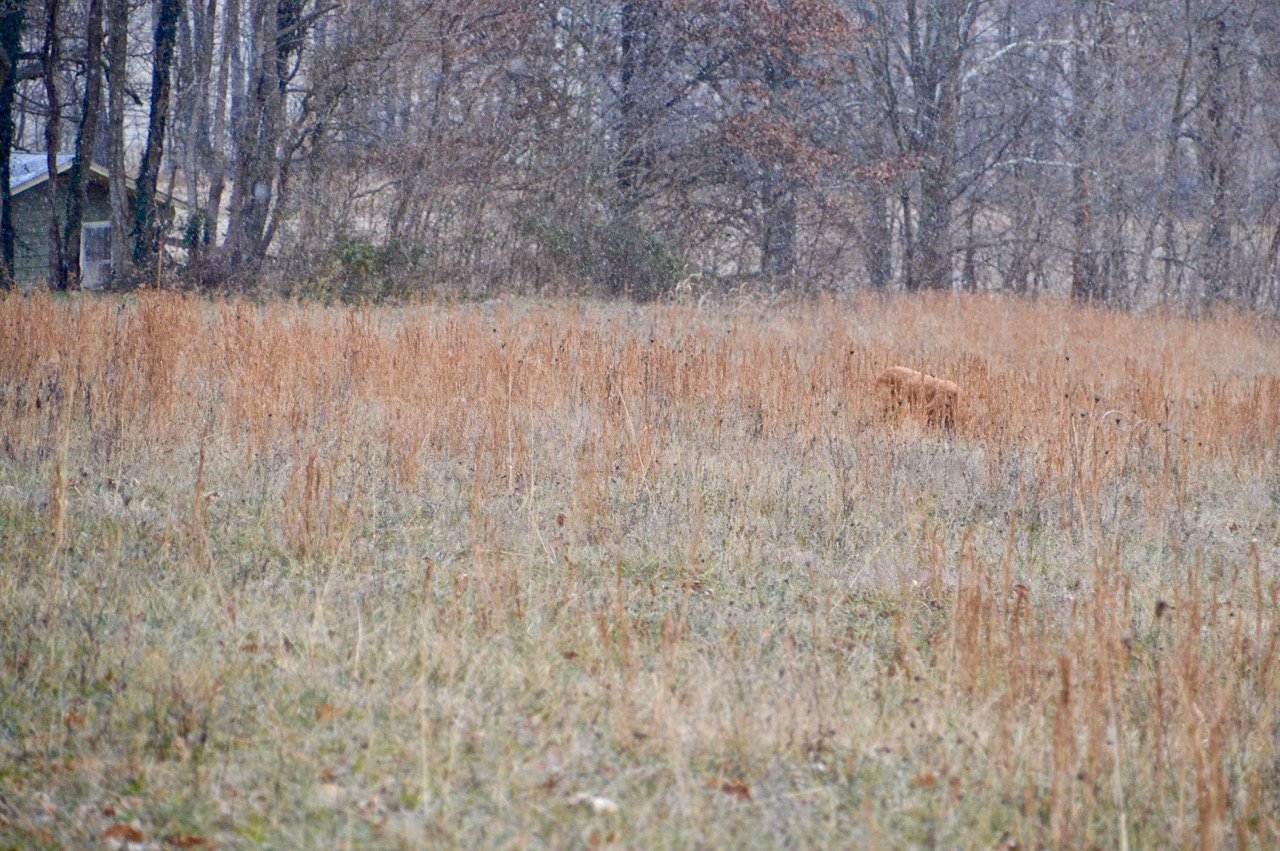 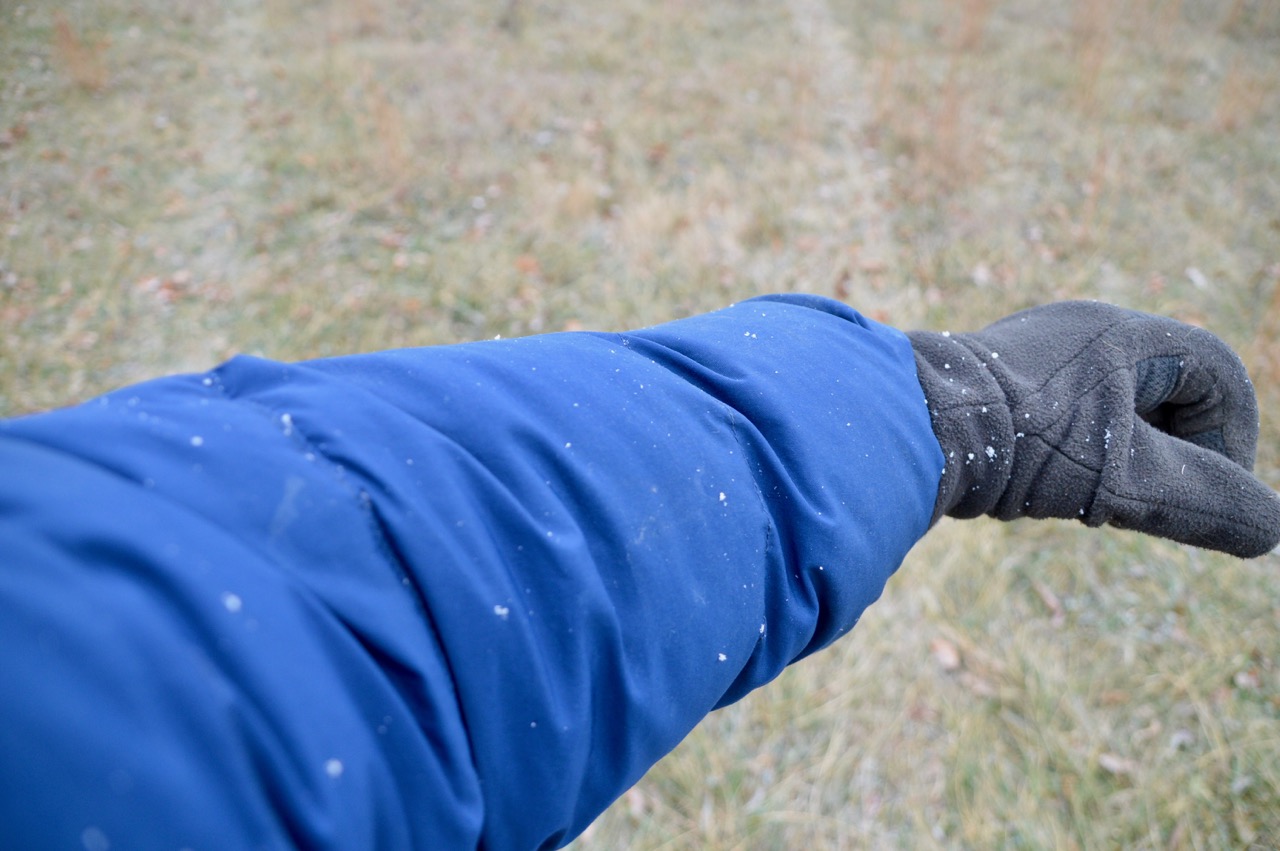 Here is proof of what I was hearing hit my jacket. Not a bad closeup photo with a Nikon camera set at 18mm. 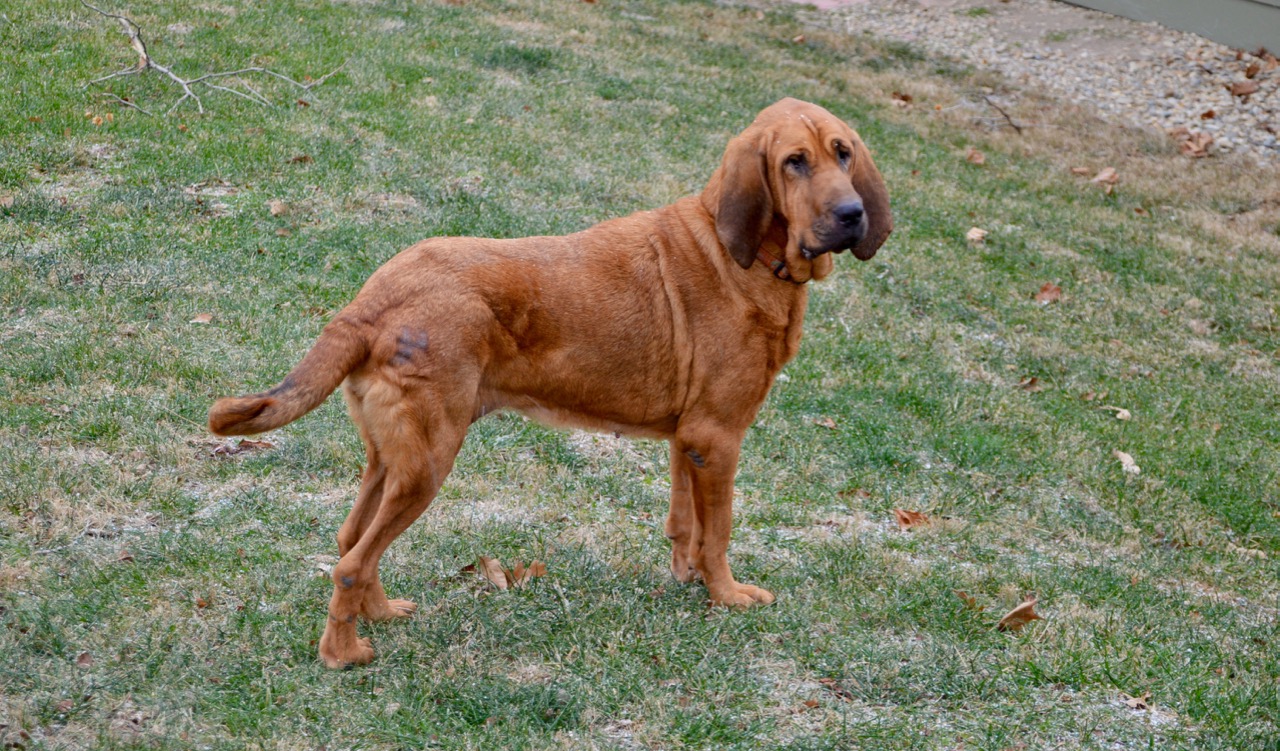 Stella was sure she could hear the snow drops too. 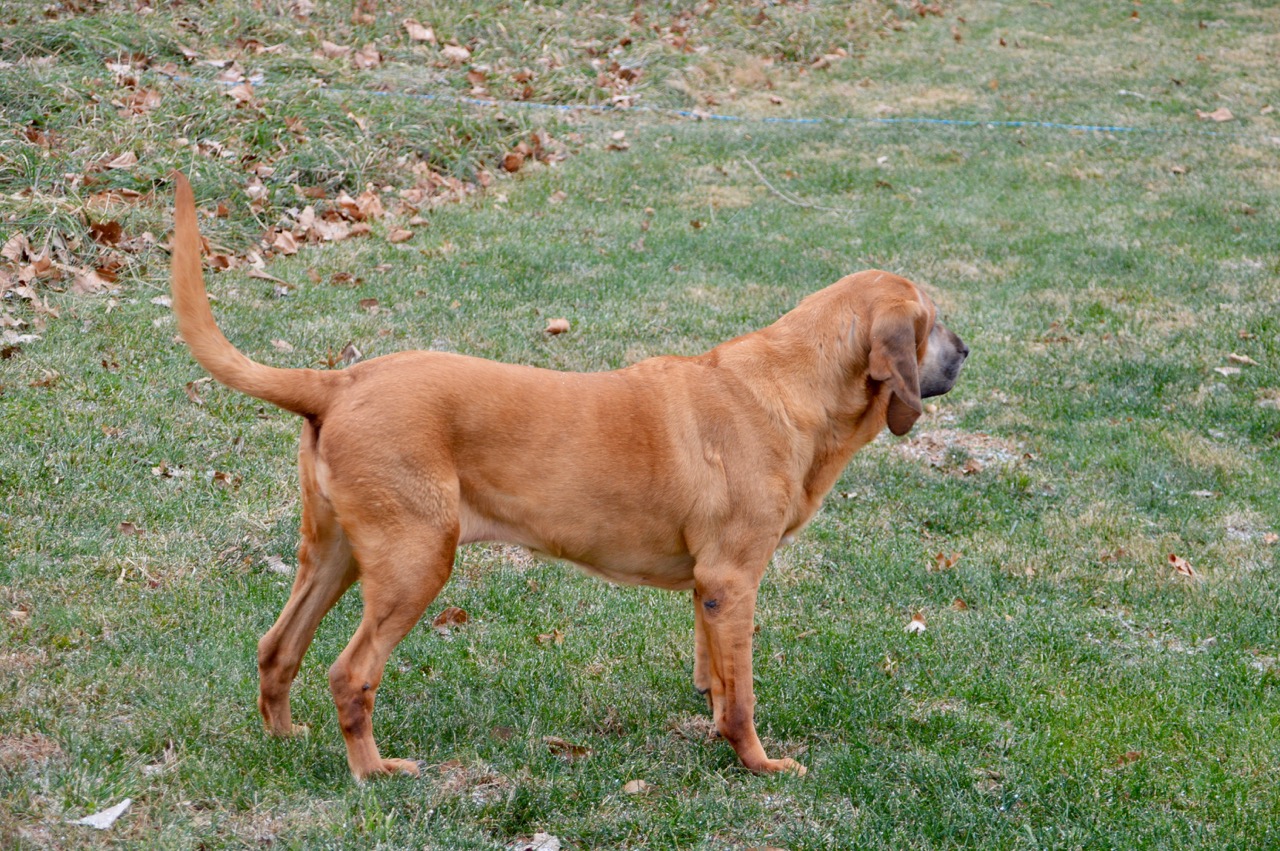 Sadie stopped trotting in the yard to listen for them too. 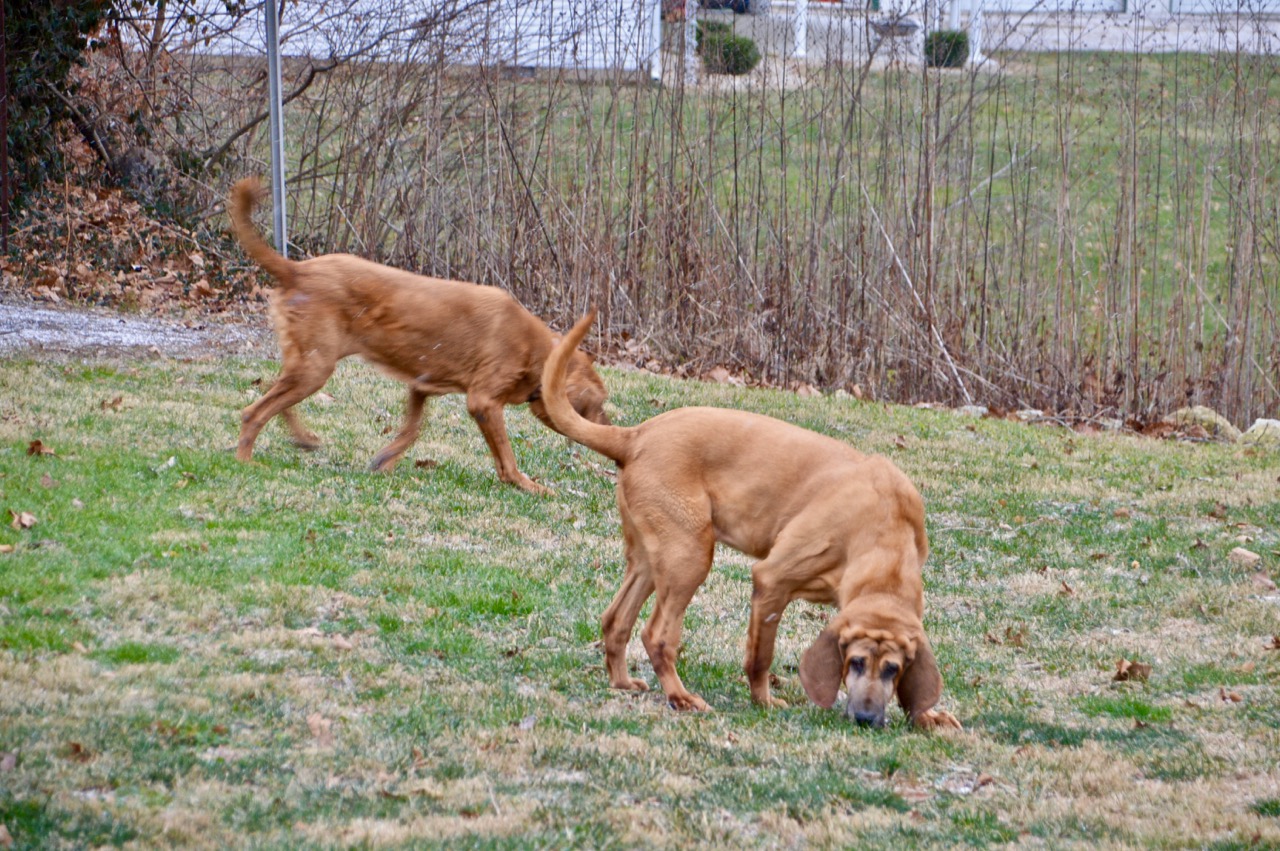 I thought they were getting ready to run and chest bump each other to start wrestling, but for some reason they both decided instead of continuing their path to the corner of the house and then going inside ... all of that small snow they 'hear' my be caused by the lawn moles that have been having a field day in warm weather, tearing up my backyard.

There is something about snow, in any amounts that make these two crazy. They will wrestle at times outside if it is snowing but since there wasn't enough, they decided to wrestle inside .... "that will make him more insane".

I forgot to mention that as I walked up to Stella in the field, we started walking back toward the house .... she ran from behind me, cutting me off right in front of me and then slowed or stopped in front of me where once again I am about to fall and stumbled enough to regain my balance.

See what I mean about the moon and stars not lined up properly for me today? Of course all of this might be caused by my brain knowing it will not be fed it's normal 14 hours of college football today for the first time since the first weekend in September.

No matter what, it will be another great day here in 'the tropics' of Southern Indiana ... this retirement gig is a great thing.
at December 09, 2017