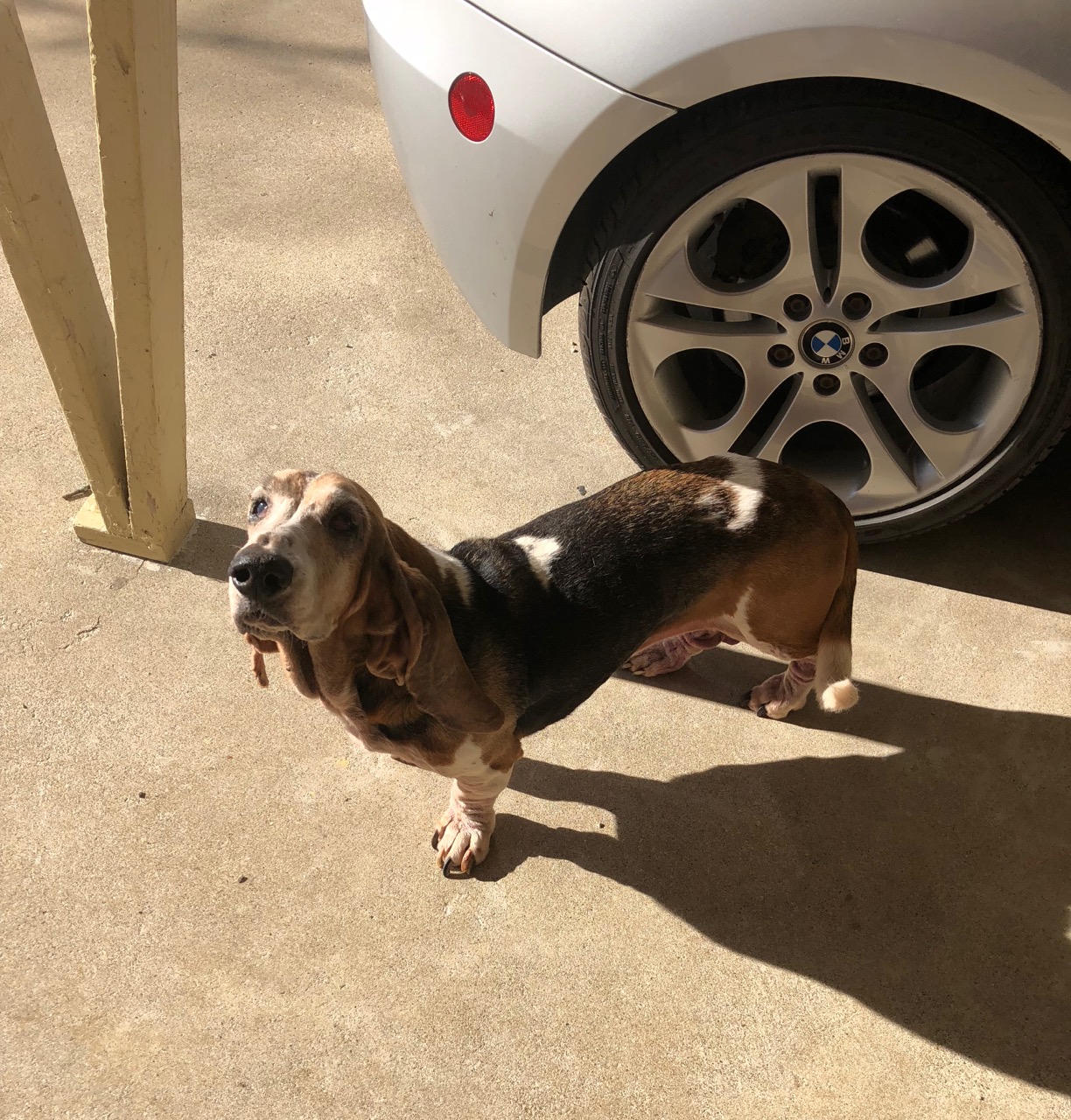 The needle on the old thermometer may have been close to 40° but it didn't feel anything like that. Windchill was in the low 30's. Still, right after lunch Heidi thought she would give me her first pose with the new iPhone camera. She doesn't pose like this too often but she seemed happy doing it ... or maybe she was just cold? 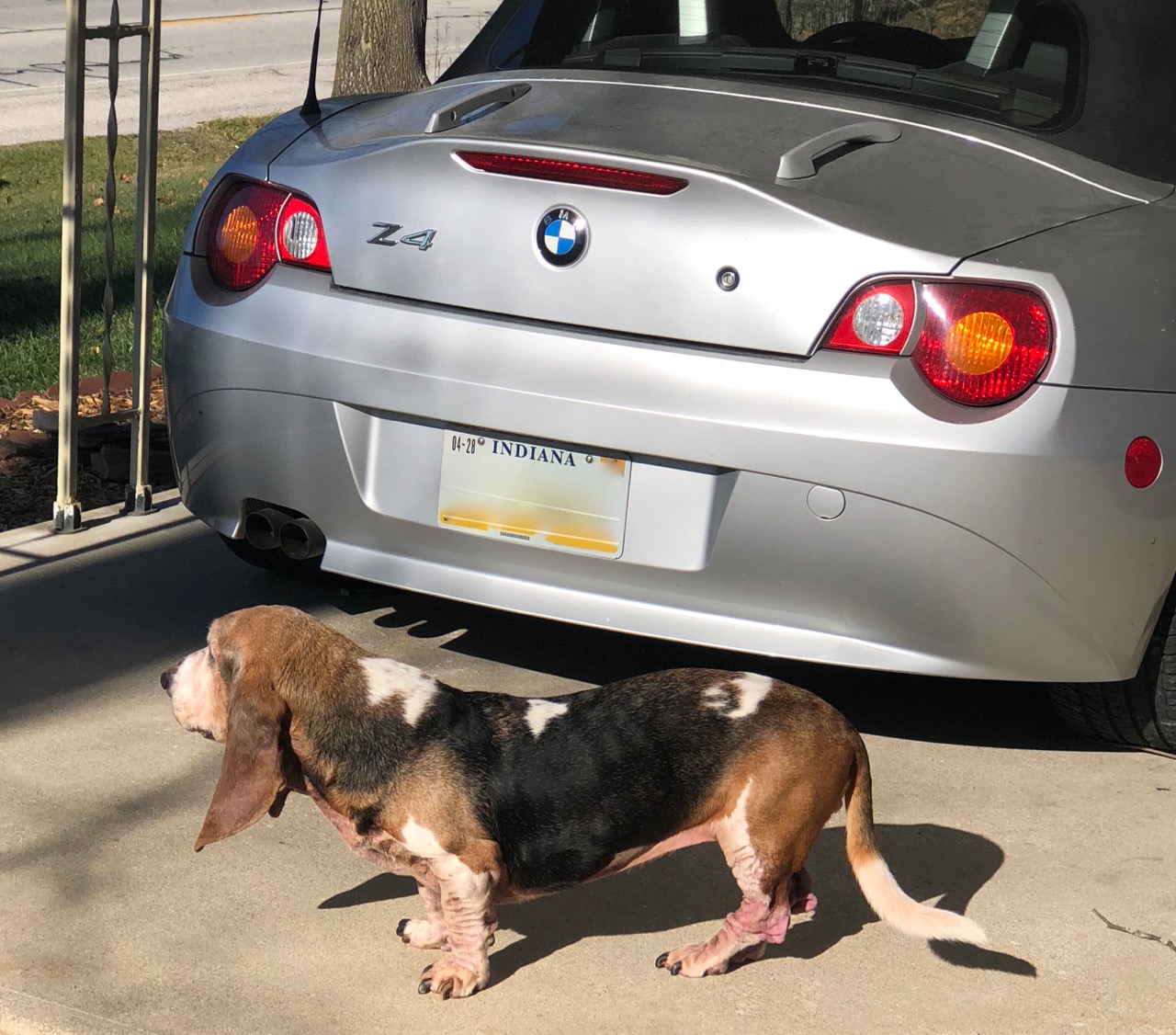 While doing some laundry and cooking tonight's dinner, I continued to read more and play again about the new iPhone 8 Plus. This phone probably does more than I will ever get around to trying or using. I cannot say at this time I am happy with the photos that I zoomed at 10x but that might have to do more with my shaking hands than the camera itself. 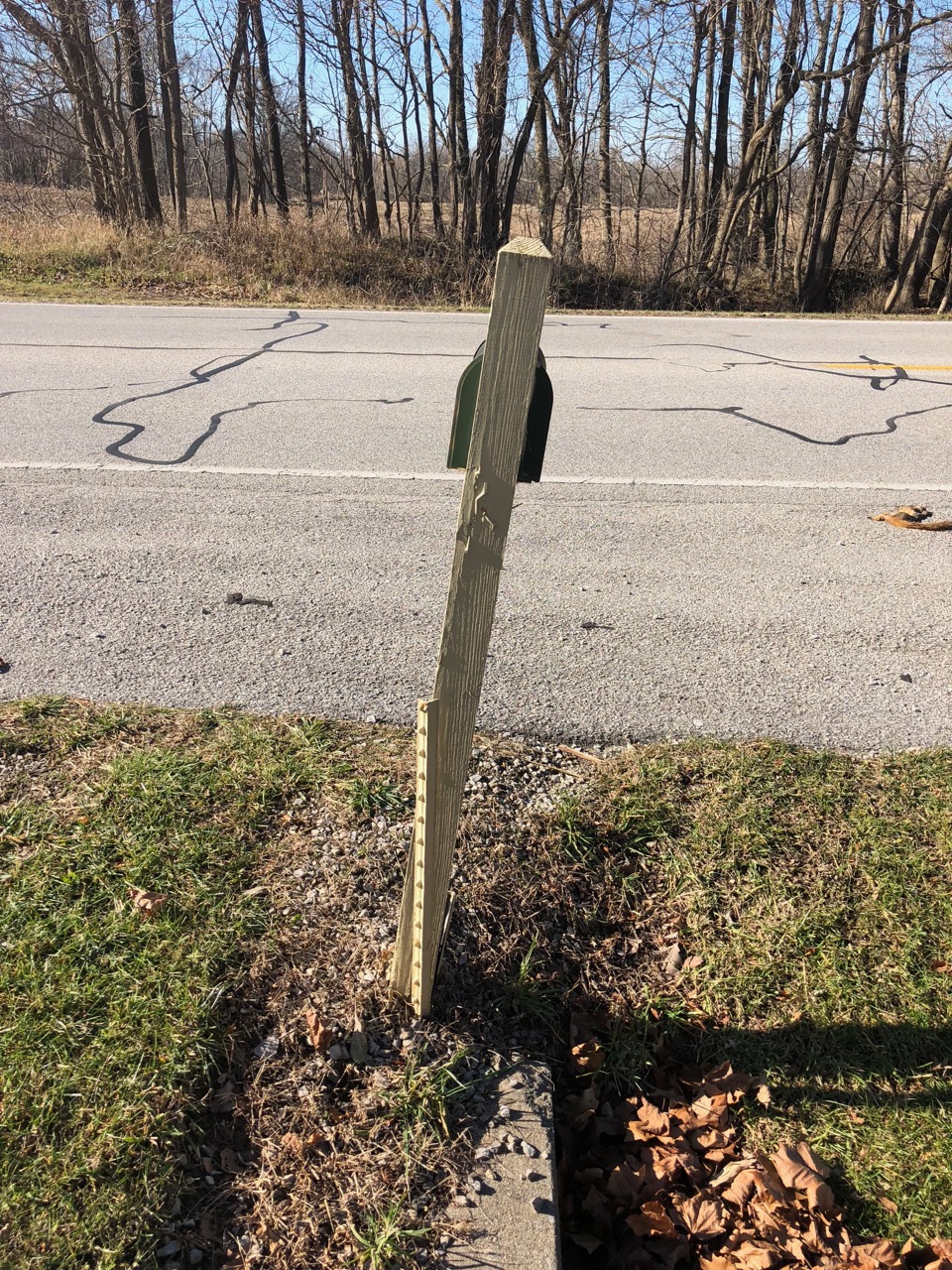 Yes, it looks unstable as hell, about to fall over, but it doesn't move an inch in either direction. Years ago I had it straight as an arrow, planted in some solid concrete and ir would have lasted for decades. The the Indiana State Hwy Dept decided the highway needed to be dug out and new asphalt applied with new shoulders at every mailbox for mail carriers to use when delivering mail.

That meant they dug up my mail box and moved it to the current location, no concrete was used. Consequently after 10 years or so, I have a leaning mailbox. That is probably caused by the soil sinking, just to the right of it. 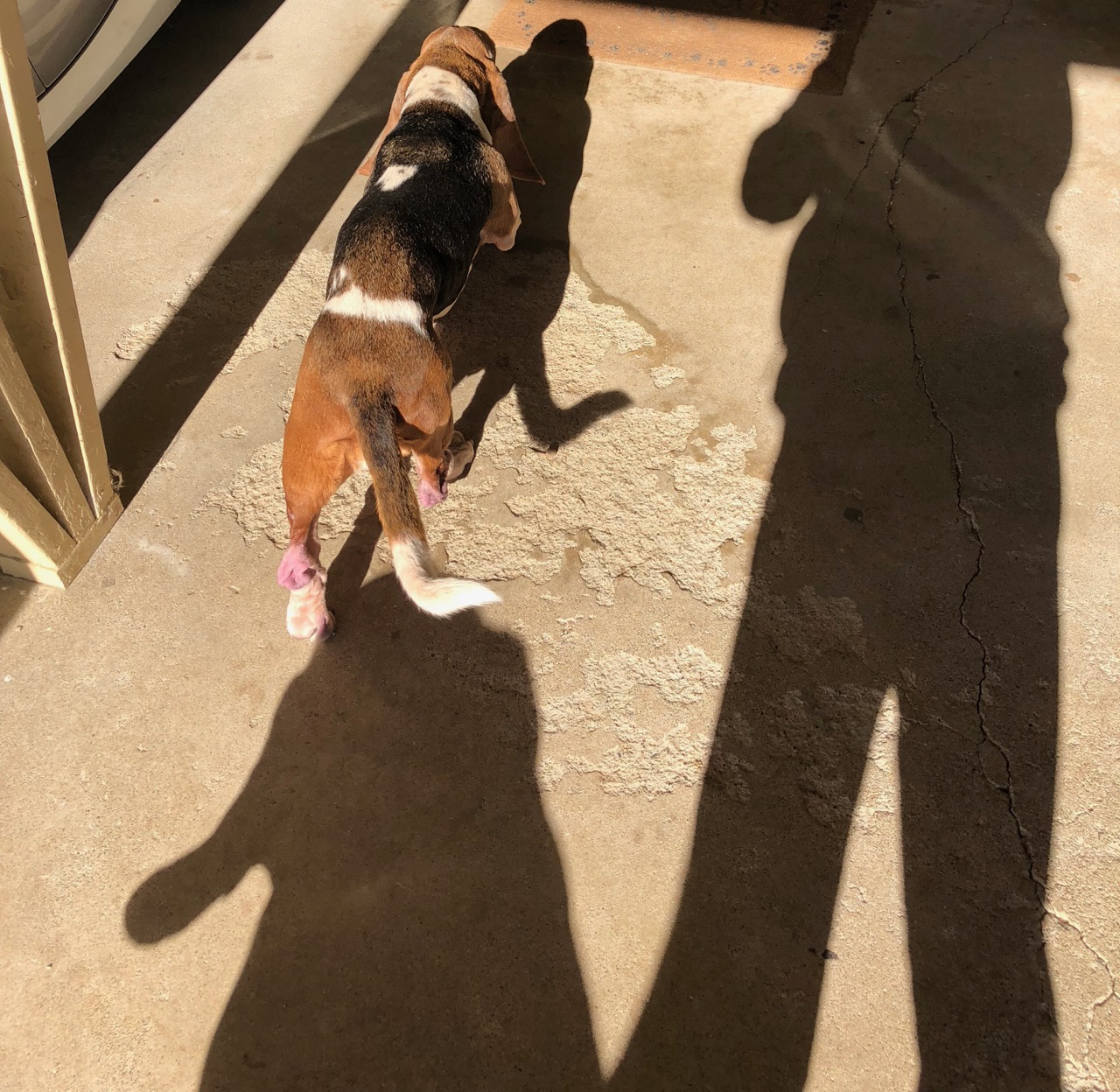 My idea of picking up sticks while the hounds were outside after lunch lasted all but 5 minutes. It was too cold with the wind blowing and I lost interest fast. Heidi lost hers to stay outside and beat me back to the door. She has been asleep under her blankets every sense. 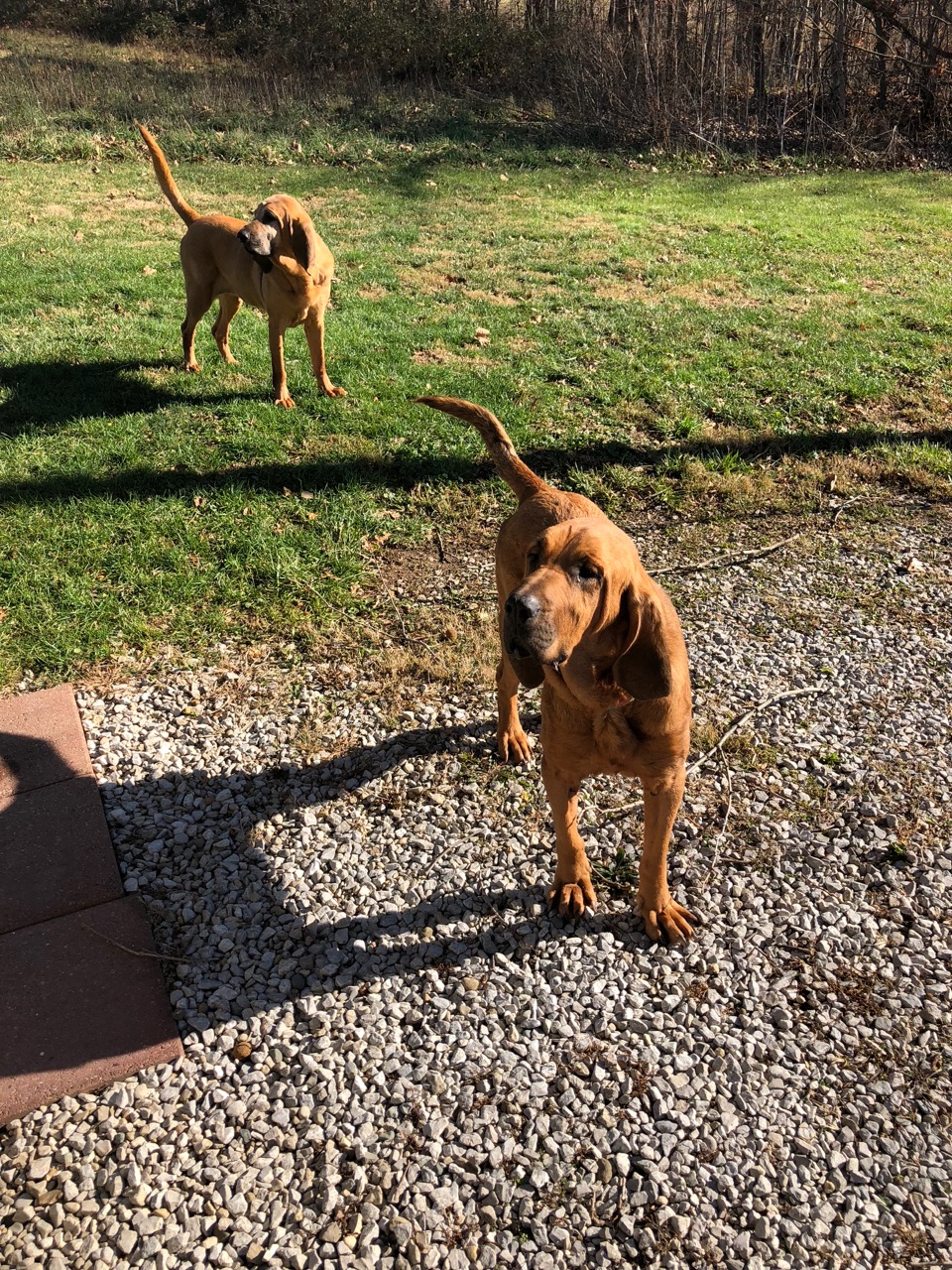 After the laundry was put in the dryer and the stove looked like it wouldn't burn the house down while cooking dinner, we thought we'd give this new toy another chance on our afternoon walk. Sadie is always ready for a walk while Stella quietly agreed. 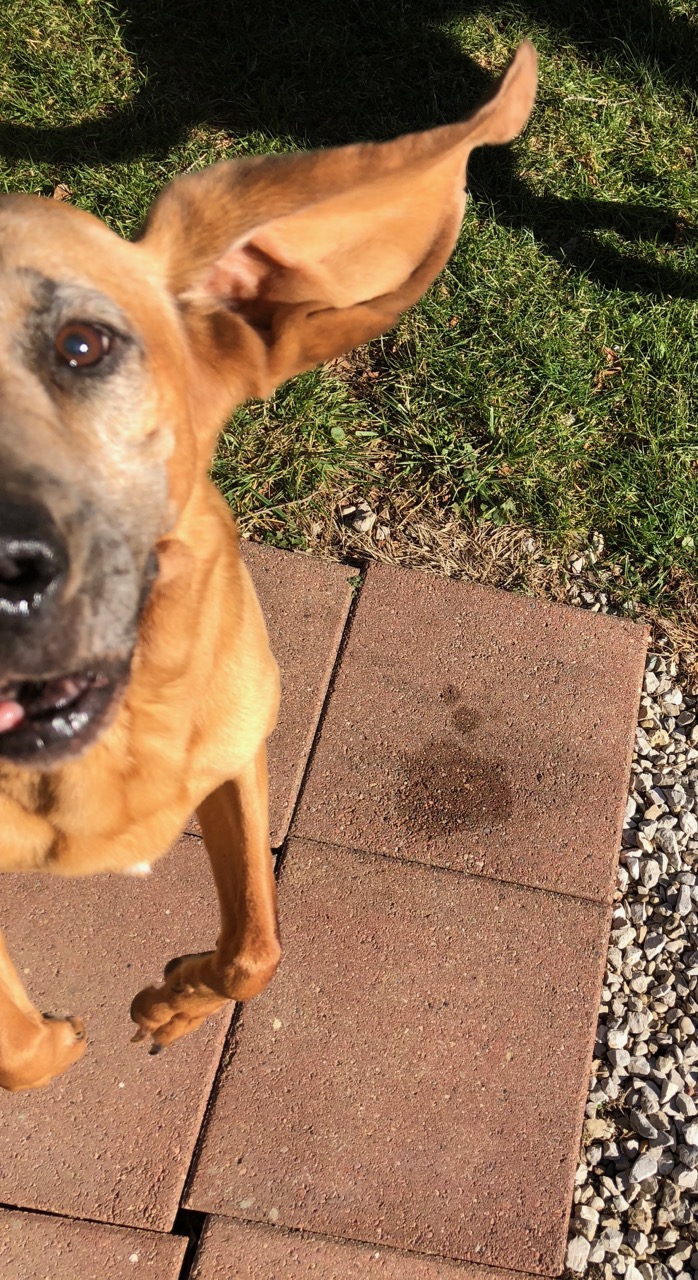 I've mentioned before that for the past 9 years and a  few months, Sadie hops up and down on two occasions every day of the year and year after year. Those two events are being fed kibble and going for walks. This is the best I can do catching her in that hopping up and down action. 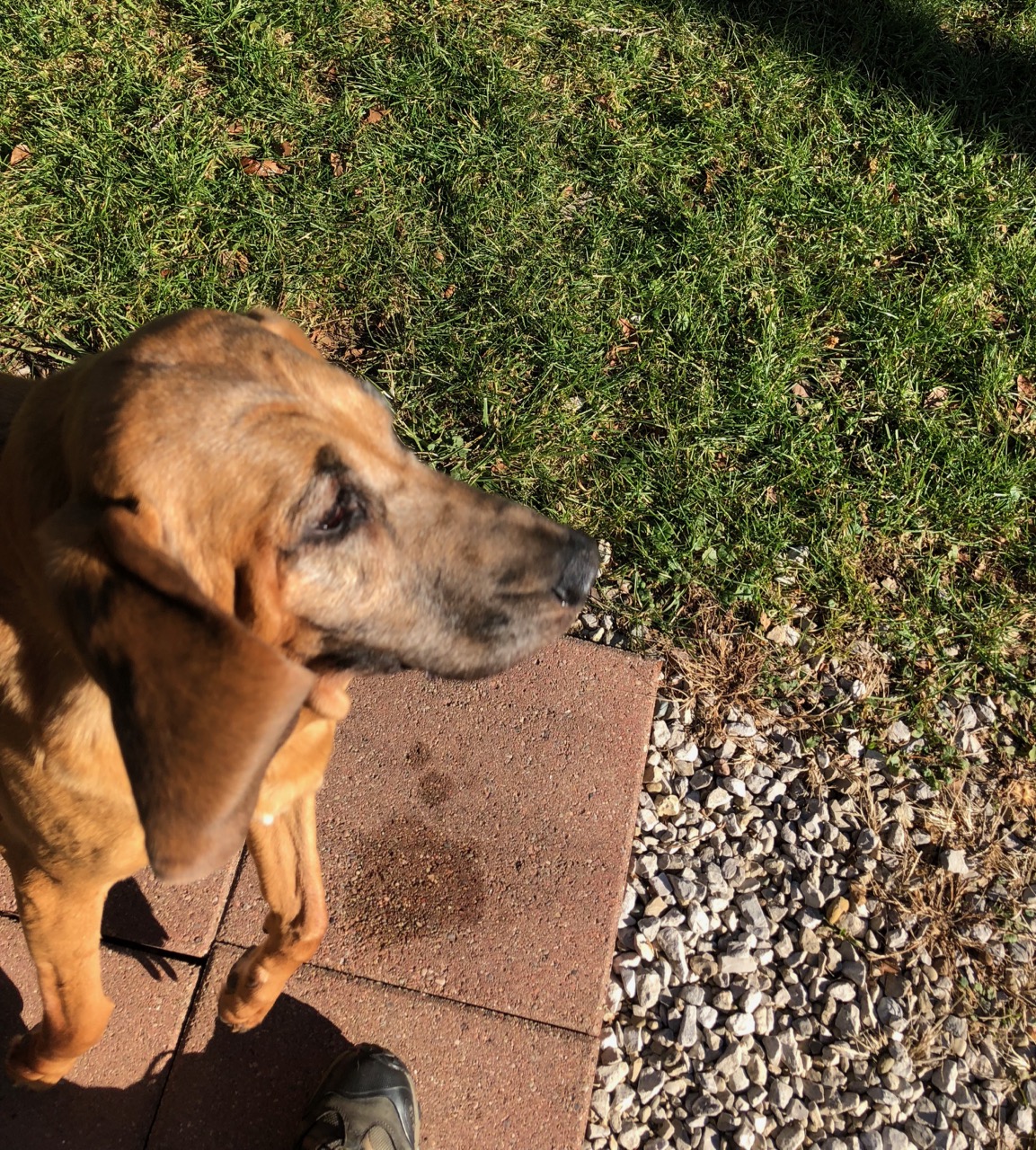 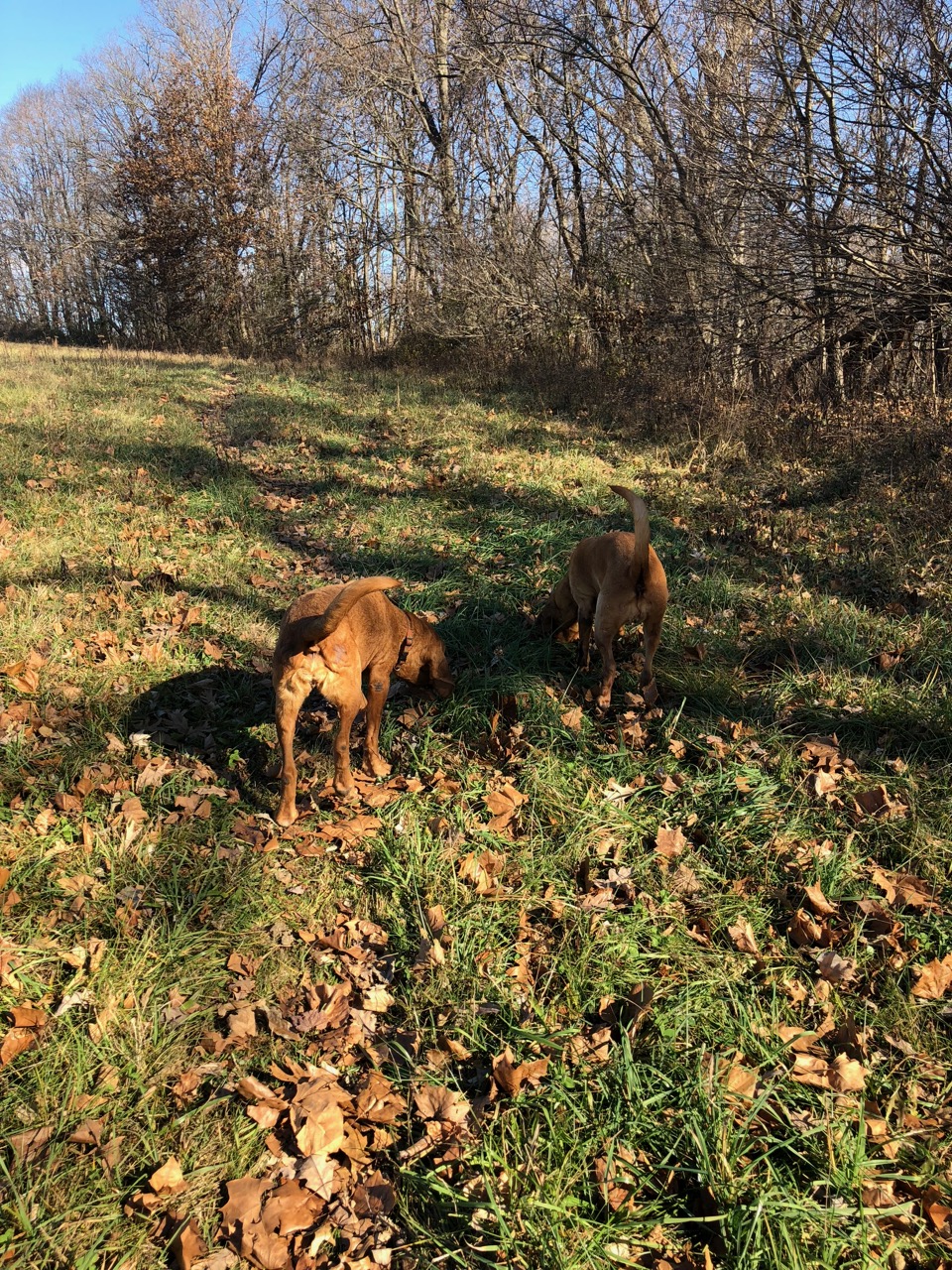 It might look warm in that picture with the sunshine out but it's nowhere close to jacket weather nor t-shirt weather. 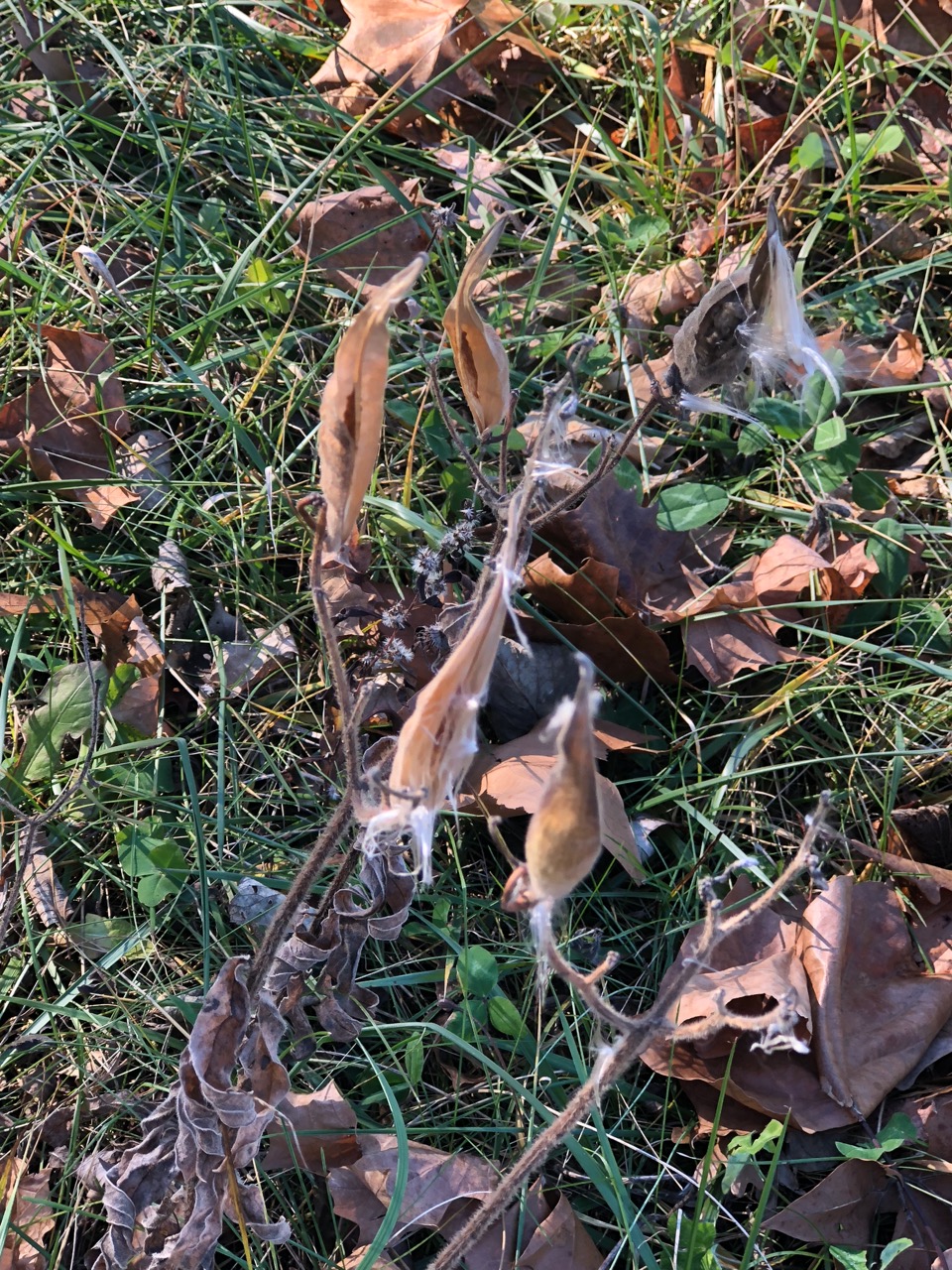 The phone does not have 'macro' capability but I wanted to see what it would do if I held it pretty close to the target of the photo. 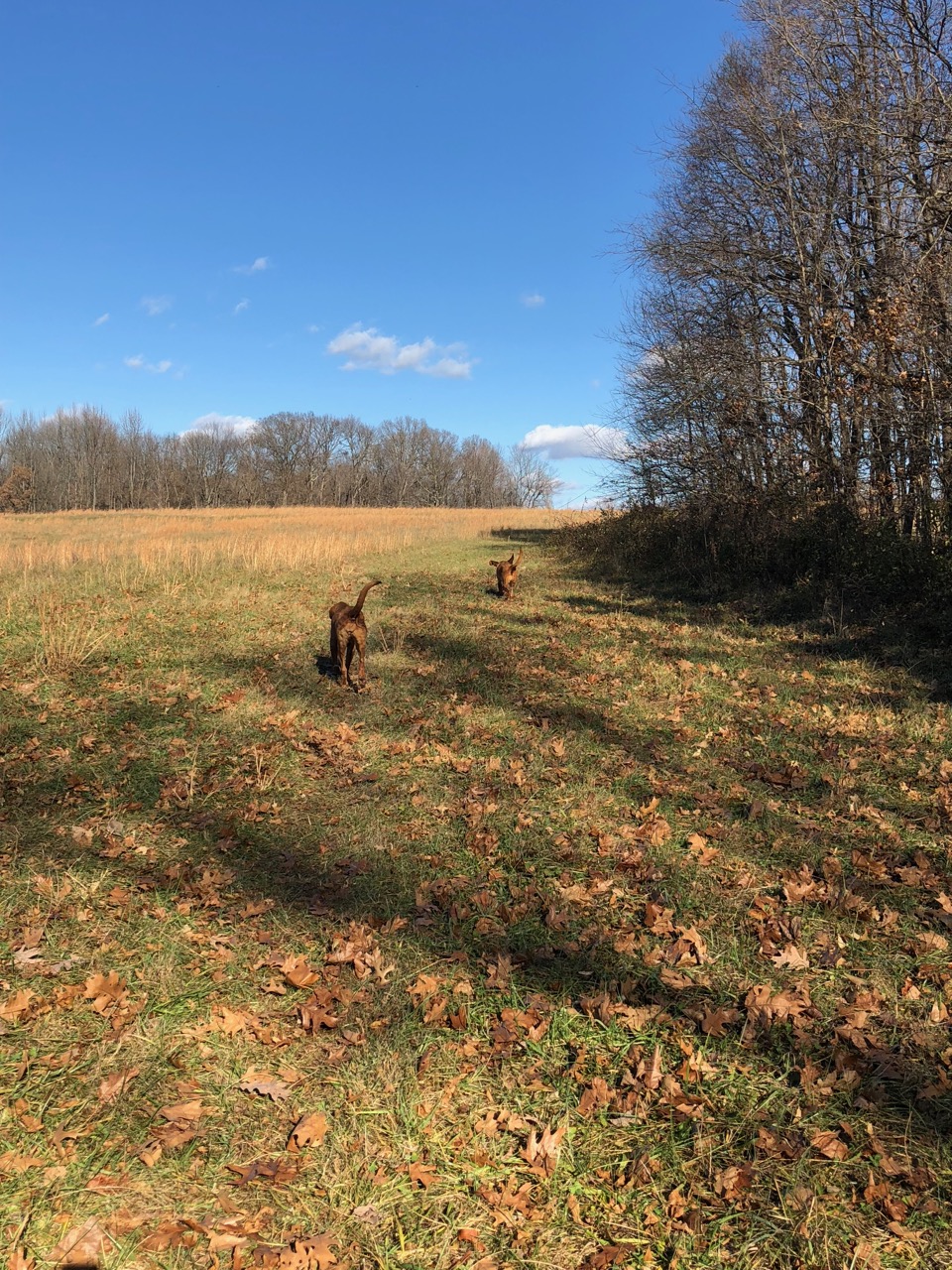 Again, I did not do any editing to color, sharpness, definition etc ... but I did crop some of the photos. 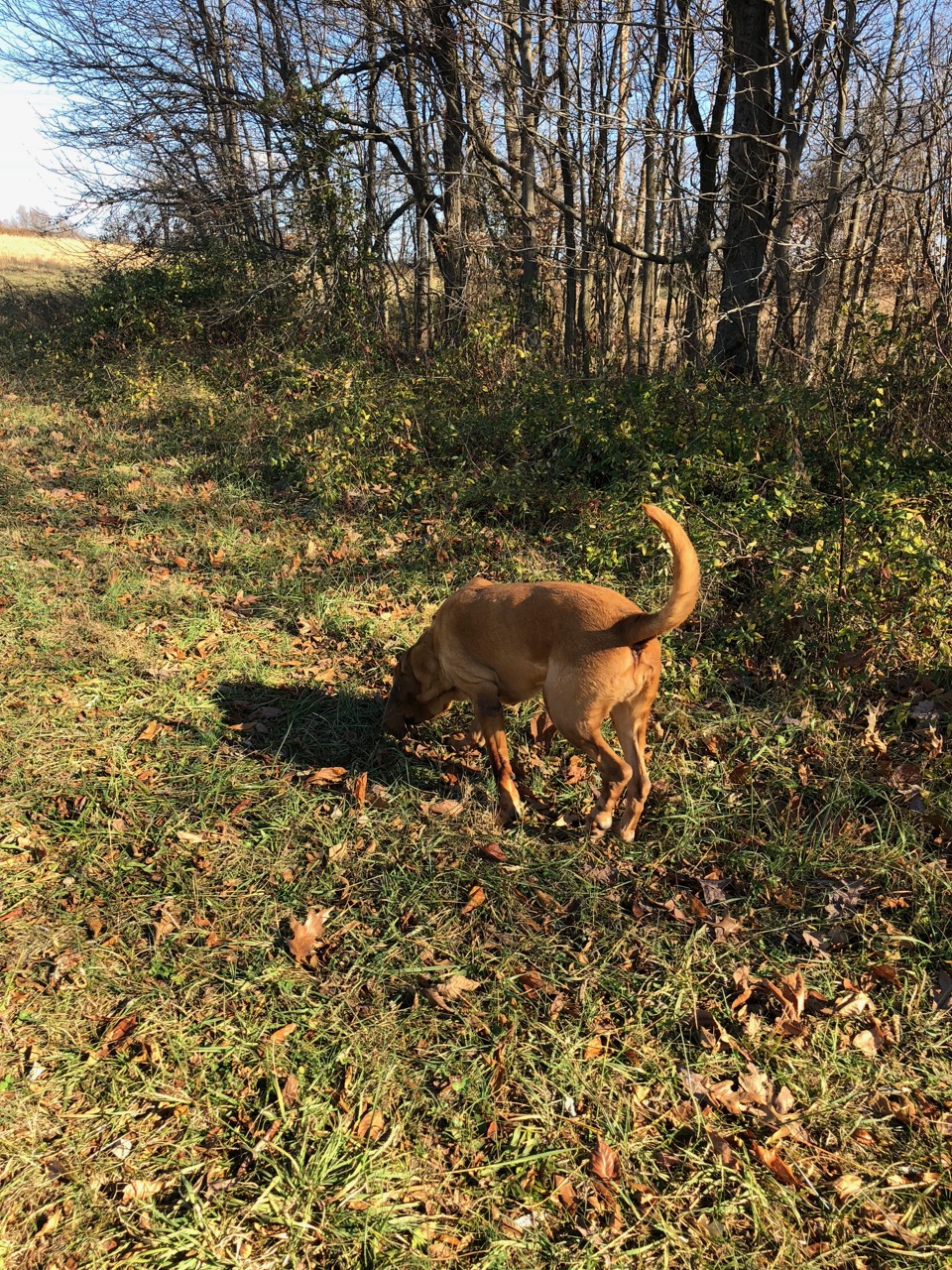 I am down to one problem that might not have a solution yet. After the phone was all set up and fully operational, my Garmin VivoSmart 3 would not connect. That meant not only would it not download my activity, sleep hours and heart rate throughout the day to the phone but also to the other devices I have with that app.

I went to Apple Support and read. I went to Garmin Support and read about that model of watch and it seems connecting by bluetooth became a bigger problem than normal, after Apple did their iOS 11 update. I was one of the lucky ones when I was able to connect it to my 6s after that update. Garmin says they are working on a fix. 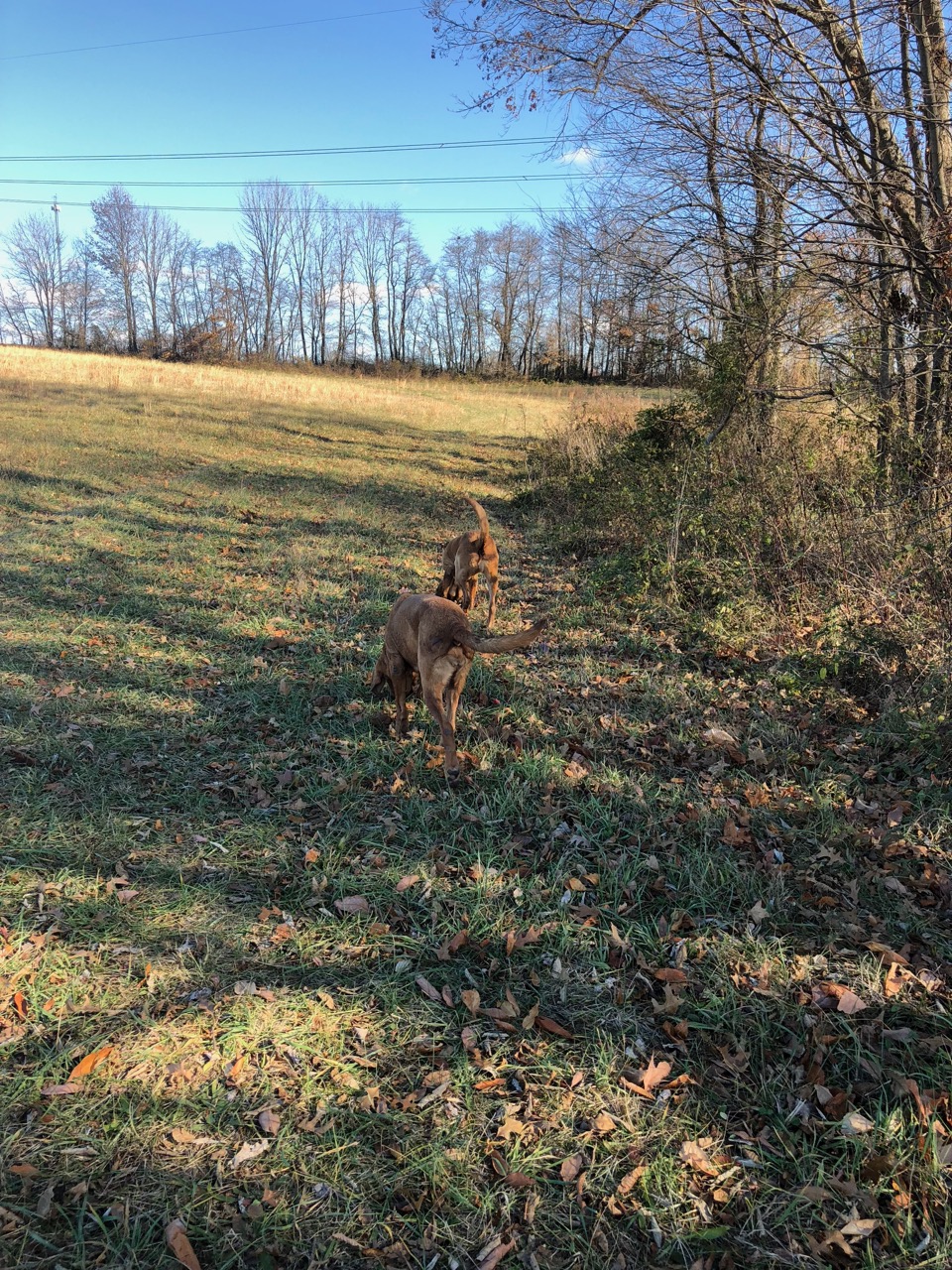 I forgot to mention this morning some of the other benefits I've seen in the short time of using this phone. My signal strength went from 3-4 bars to a solid 5 bars all the time with the same Verizon service. I had a call last night from a friend that was doing her walking for exercise while talking to me through her phone's mic ... the call was so strong and clear you would have thought she was in the same room ... much different that past calls.

I mentioned the A11 chip makes everything lightning fast and most of the time close to instantaneous. The battery life is so much better than the 6s I had. I've had it on since early this morning, have taken a lot of photos, surfed the internet, answered emails and I have used only 7% of the battery at 5:00pm. 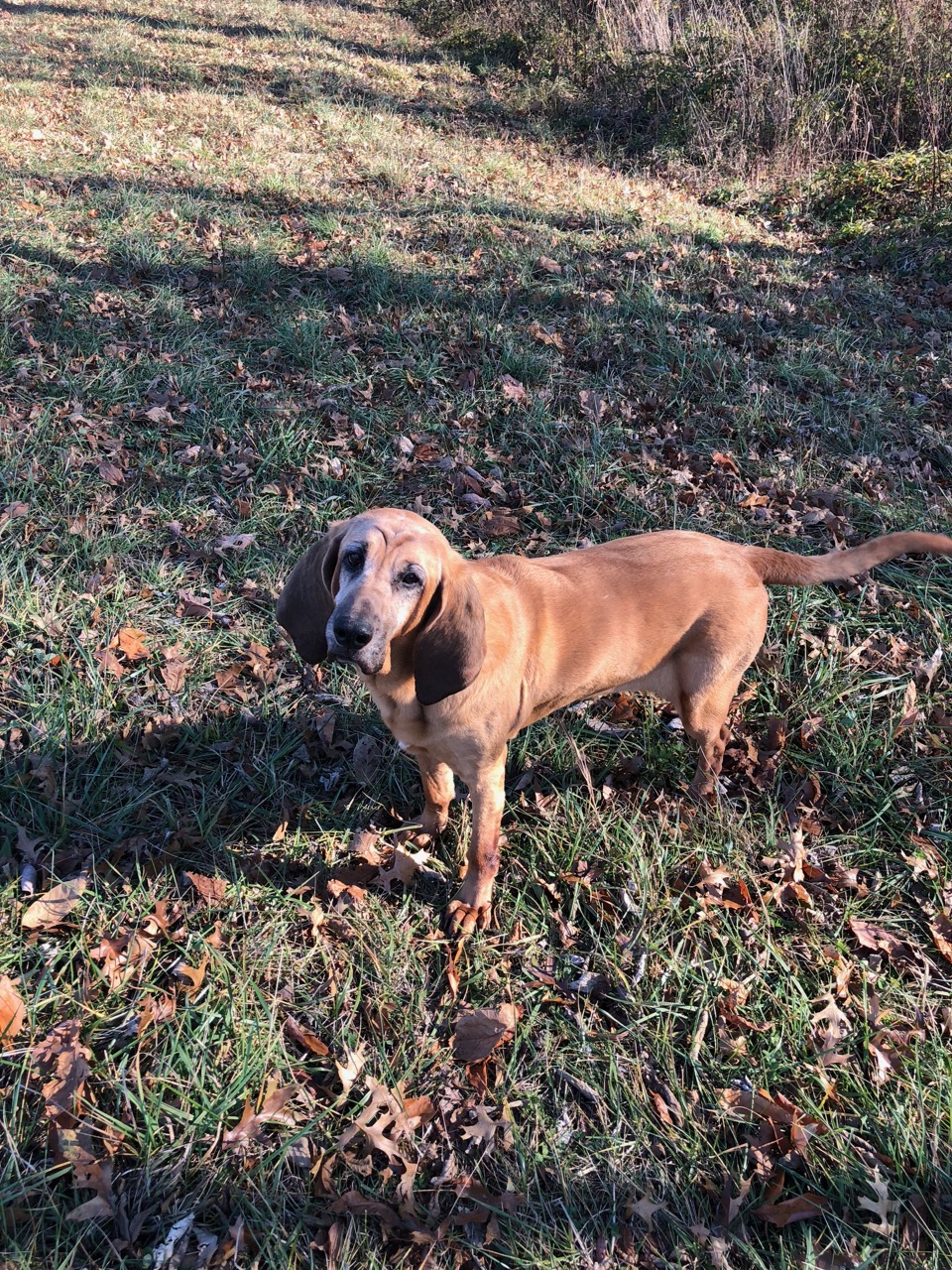 My journal project is progressing okay. I am in the stage now of scanning old photos that I took during that trip and will upload them into my Pages document once the scanning is complete. I still like the idea of using a page on this blog because I like the formats of blogs more than I do documents. I am probably missing something in all the design options I would have keeping it in Apple Pages. 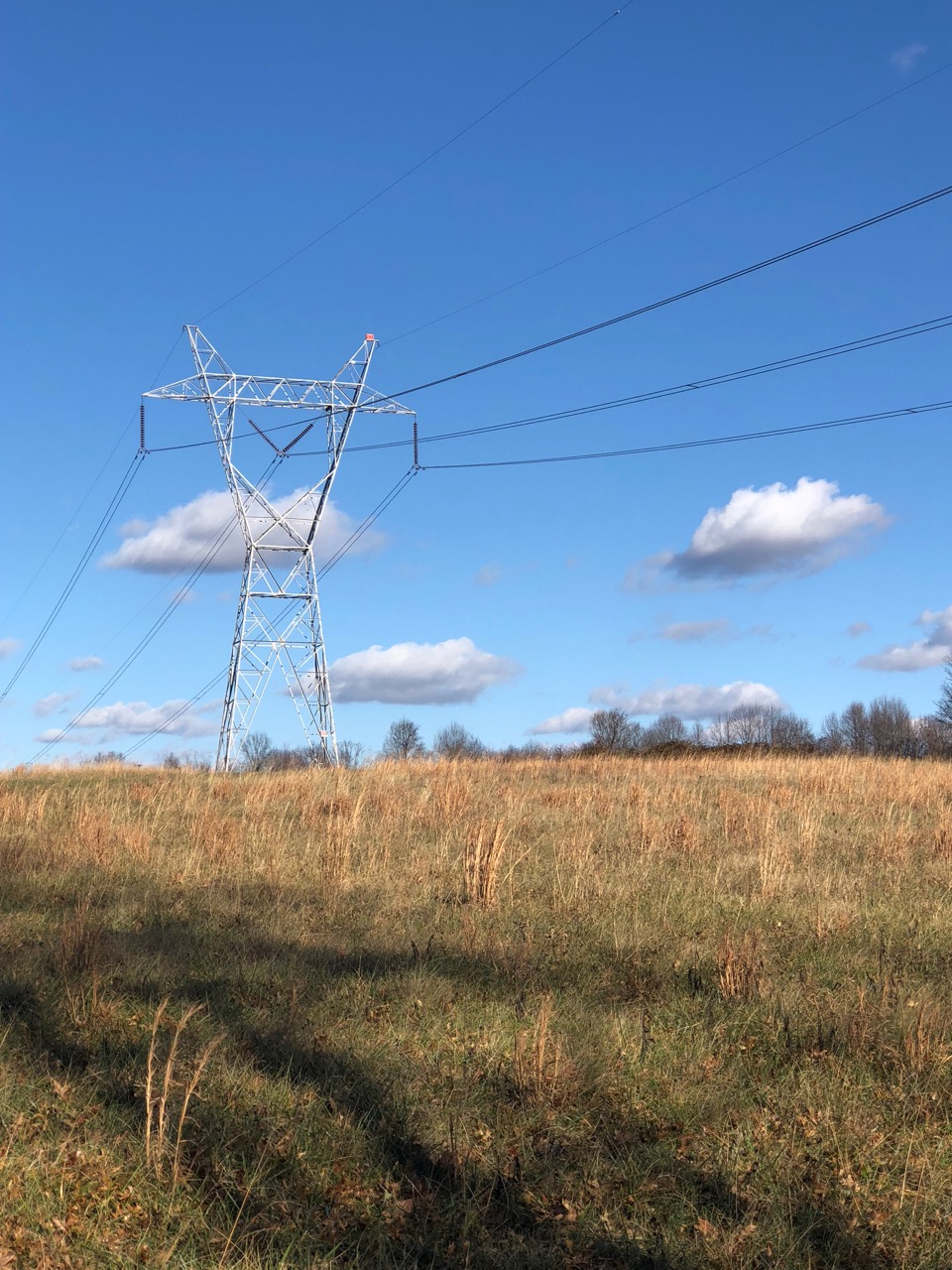 I thought the position of the clouds were interesting in this picture.  Once again, any blurriness is from my hands moving, not the camera. 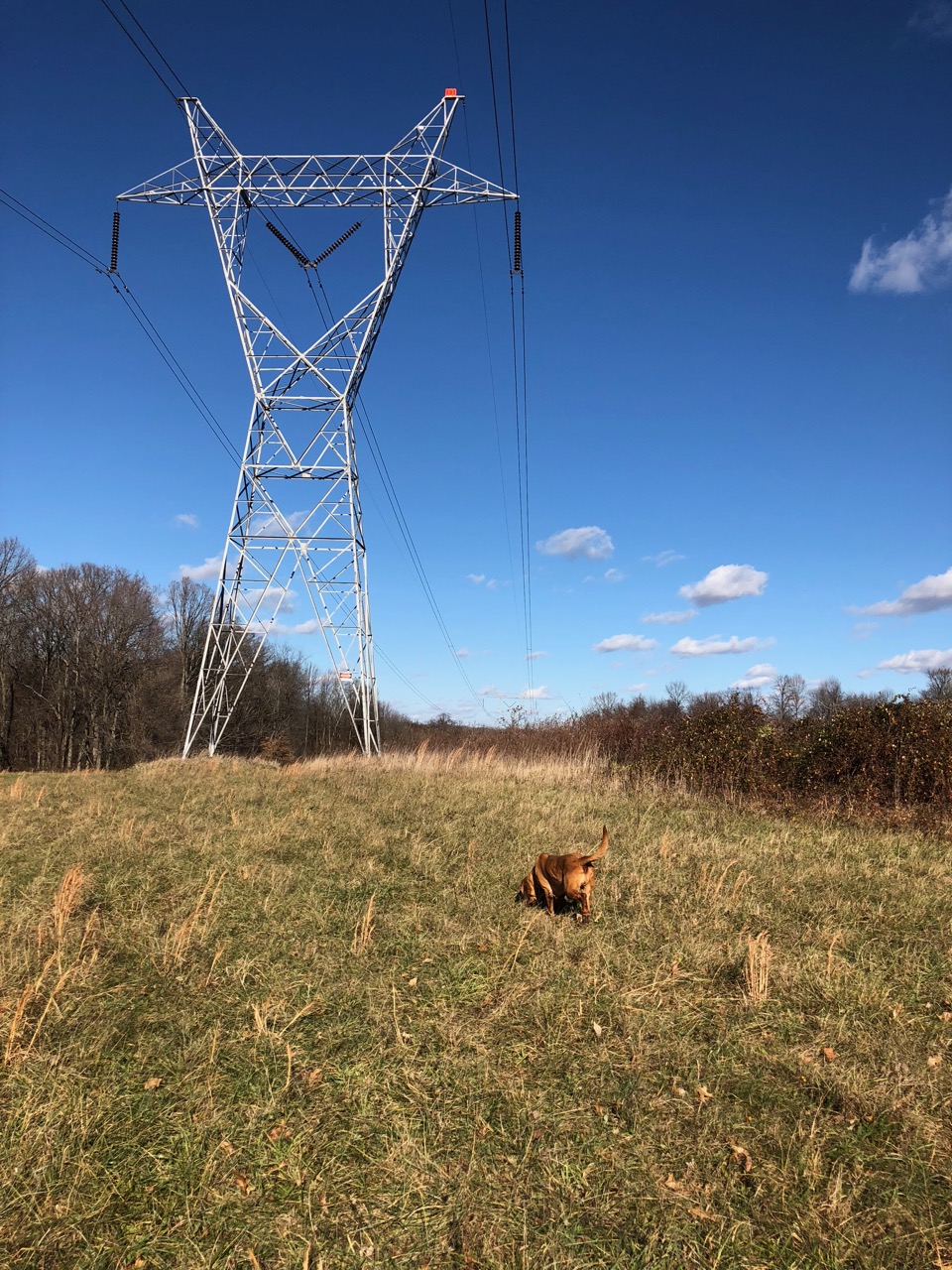 It was about this spot right here that Sadie would do what Stella does ... ignore my calling of her name. So I continued my walk home when she finally realized I was serious and wasn't going to stop. No zooming here, just trying to keep her in the center of the photos. 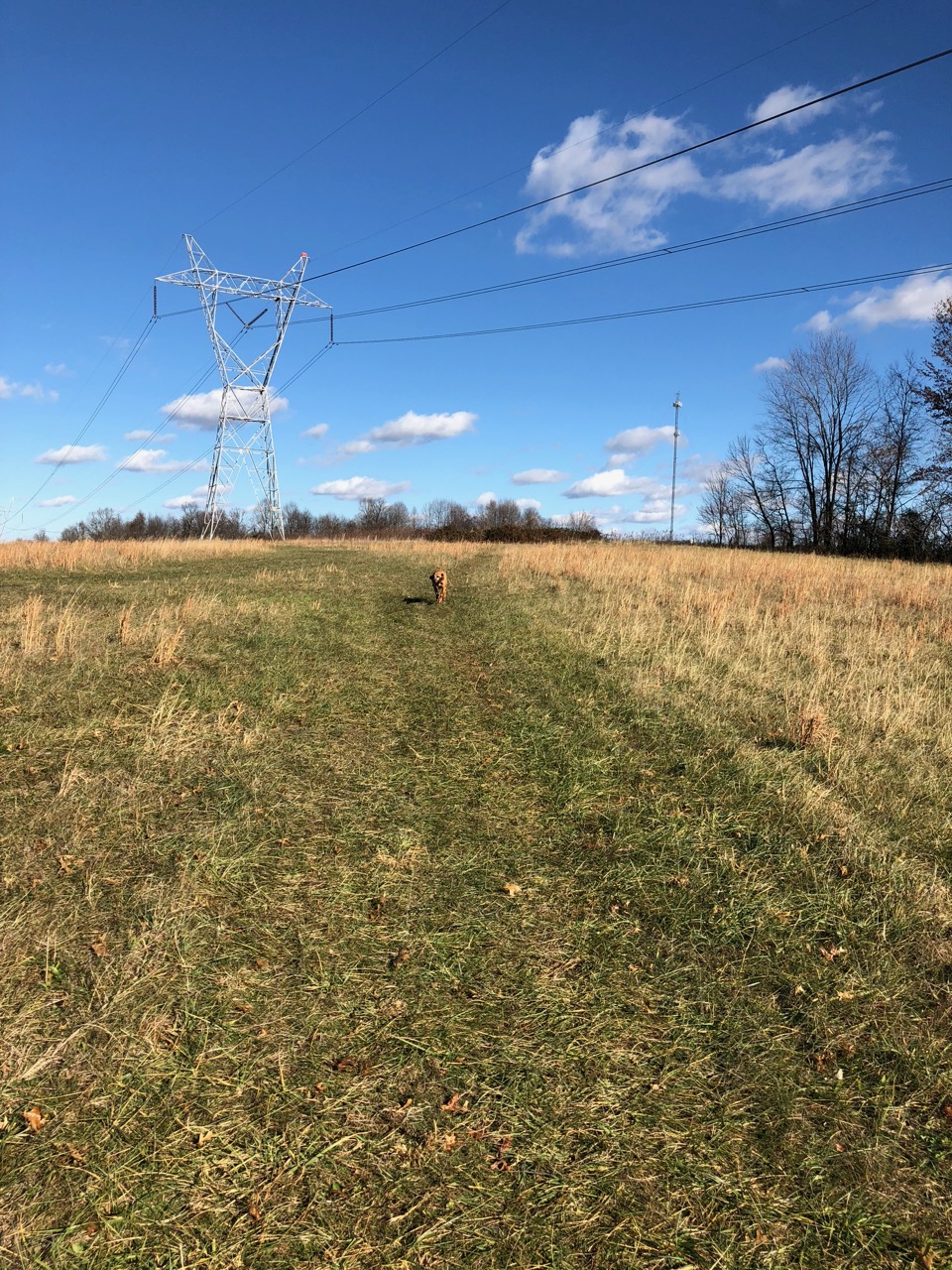 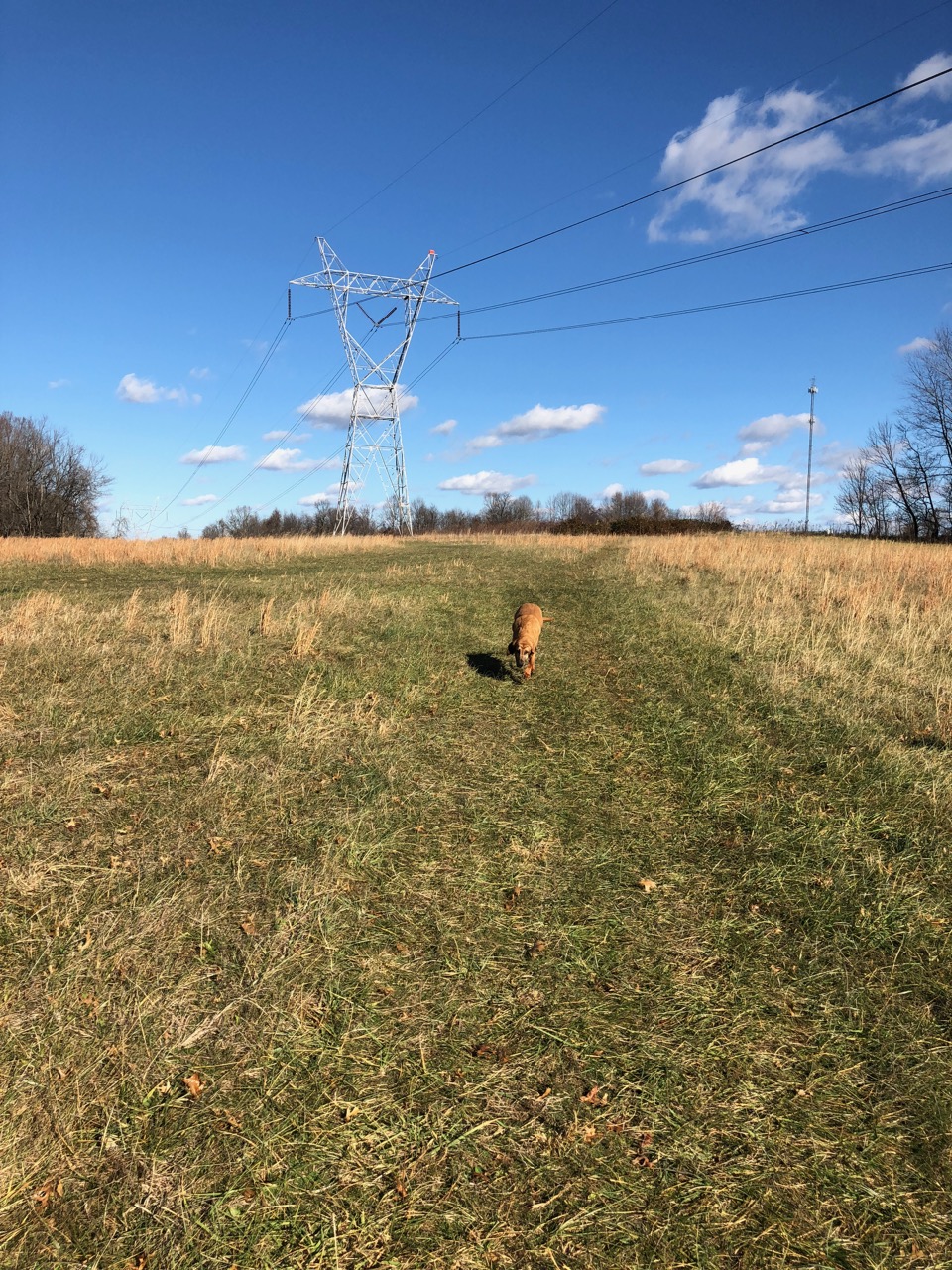 That gave her a workout for the day and to keep her in shape this winter. 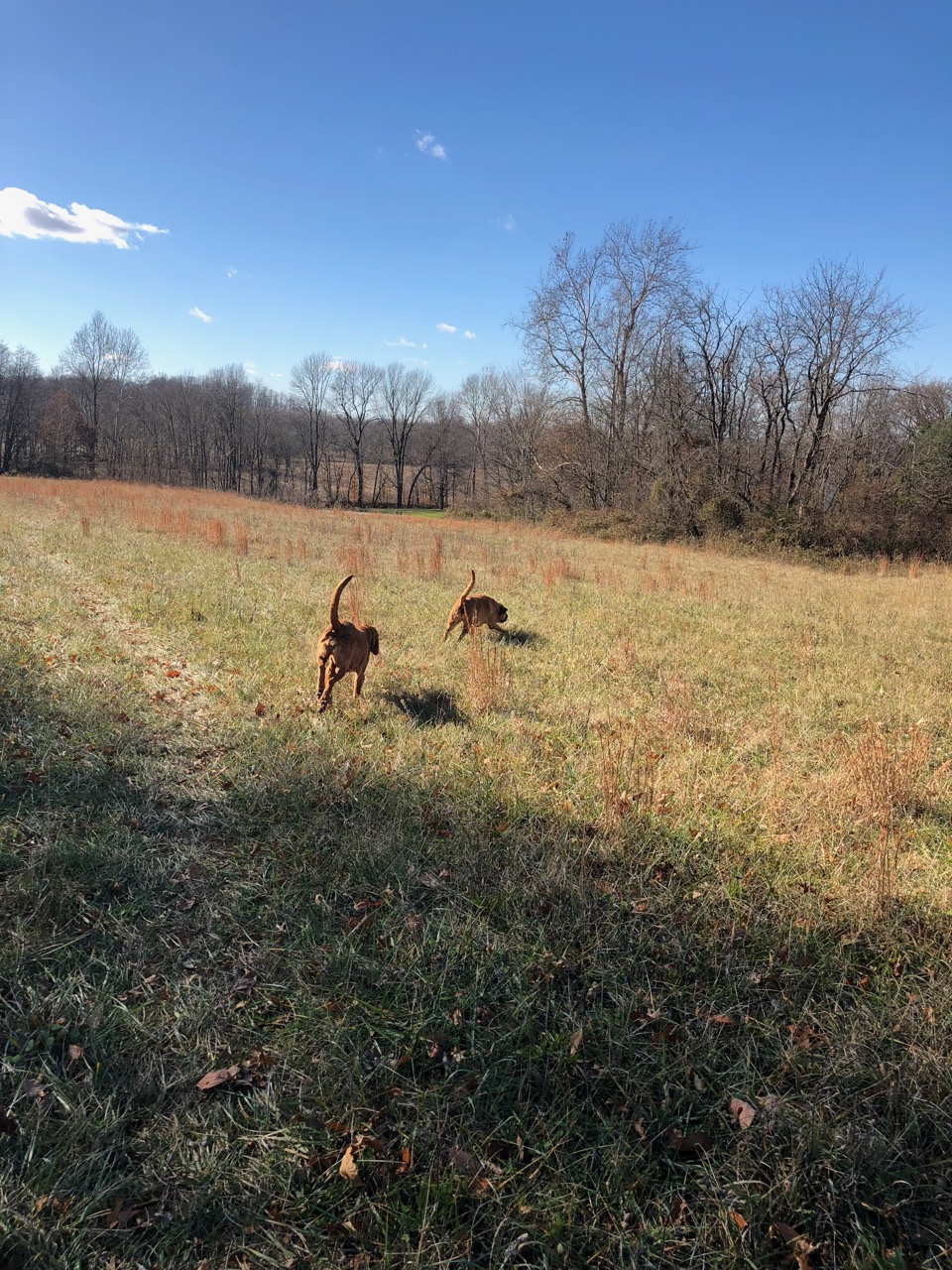 Stella saws us walking past her so she caught up with Sadie and escorted me back to the house. On a day like today they both wanted to make sure I was around to let them back inside a warm house. 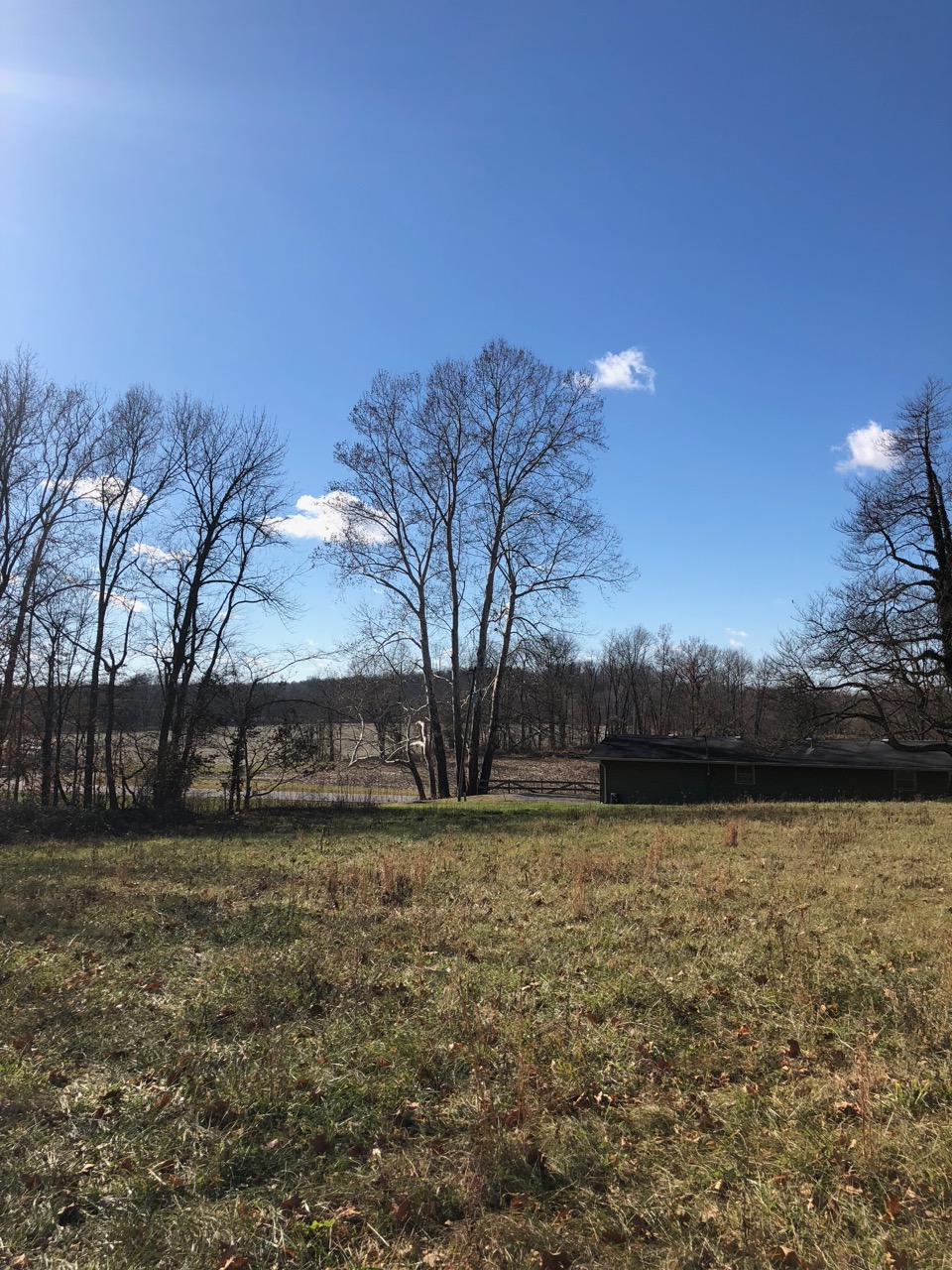 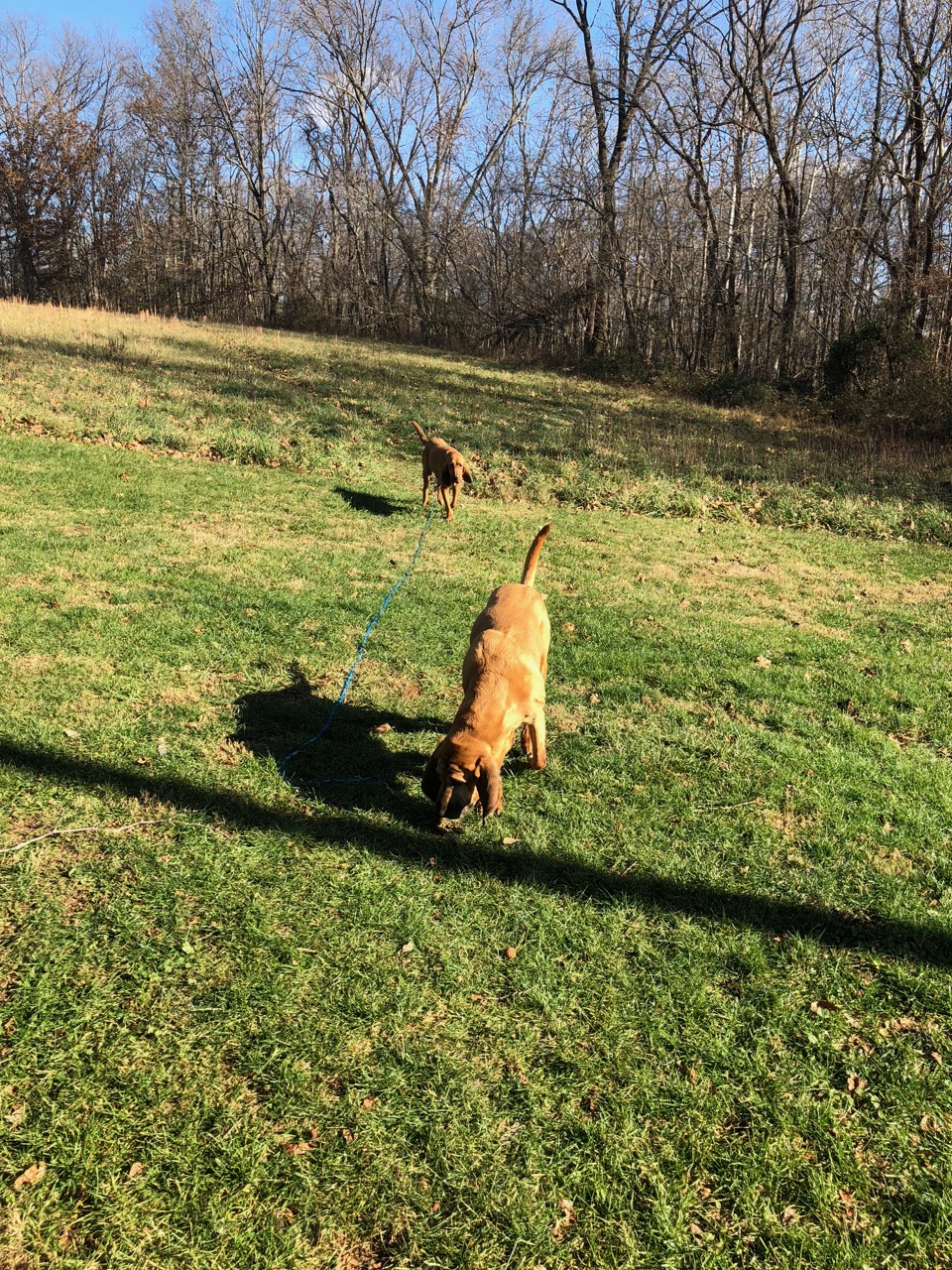 Another successful walk for the afternoon, the 2nd of the day and probably the last one due to me being a whiner when it comes to freezing weather. Cold weather makes me want to drink coffee in the late afternoon so I may pay tonight for the 12 oz of coffee I had this afternoon. 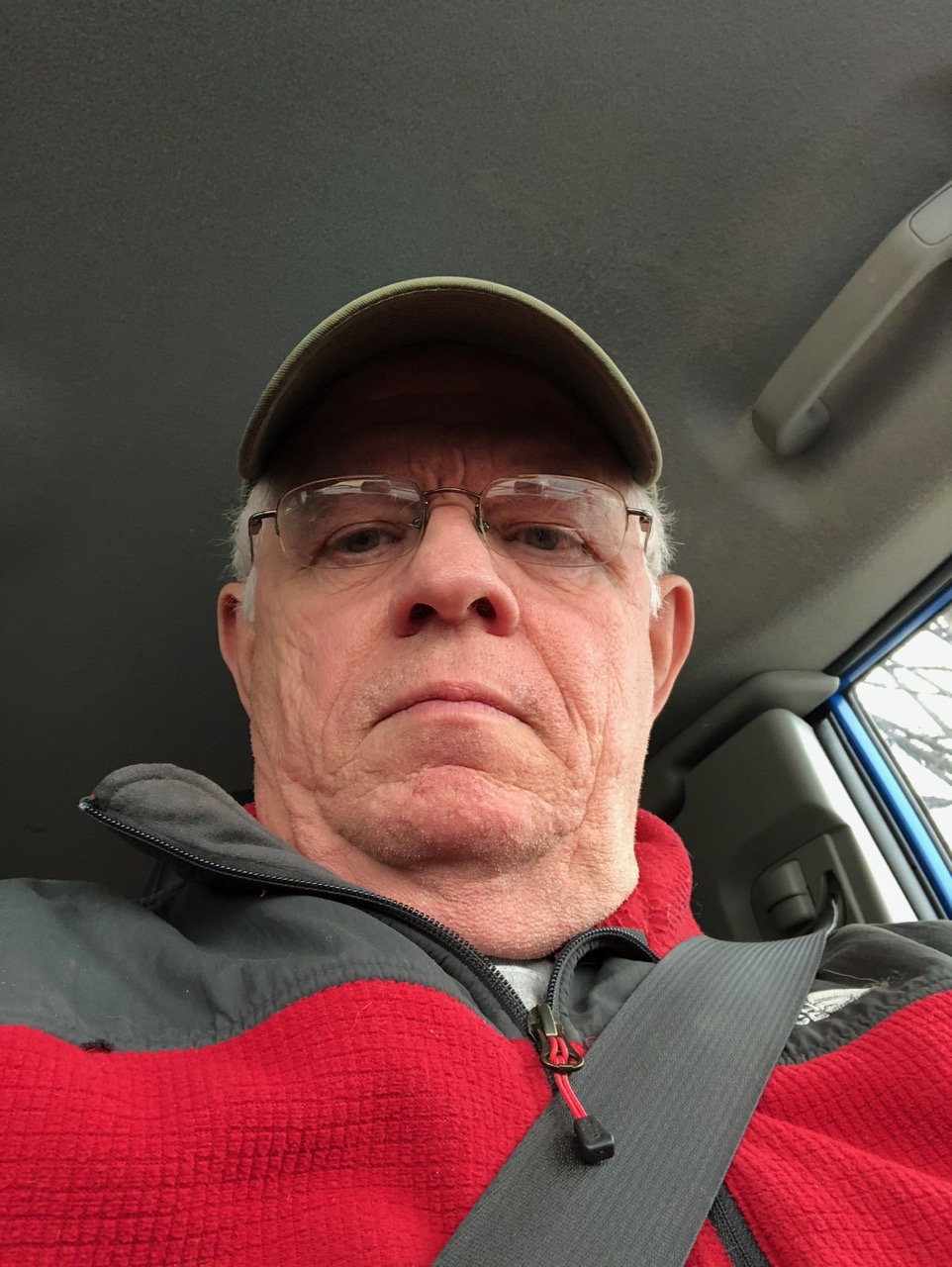 I guess if I can post one selfie I can do another. This was the very first picture I took with the new phone. I had just pulled into the parking space at Mother Bear's Pizza. I was honestly shocked at the quality of this photo and how real it looked.

On to more reading, researching plus scanning photos for the journal ... and a few games of Mahjong fit in between while I am on break.

How soon will the snow start flying here in 'the tropics' of Southern Indiana?
at December 06, 2017