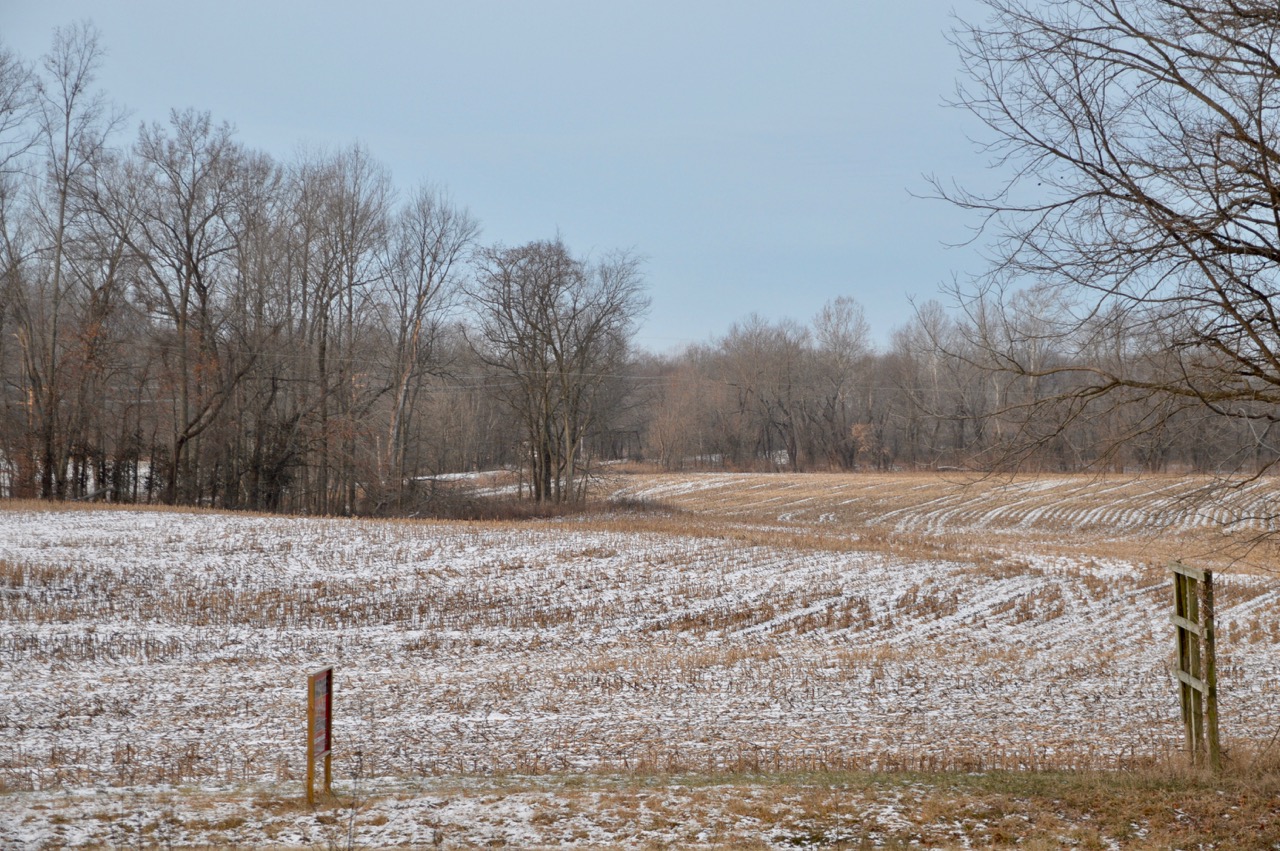 By 8:30am it wasn't much warmer than yesterday morning but I had two bloodhounds with cabin fever and Sadie had been pacing inside the house every waking hour since yesterday. We didn't walk at all yesterday because the temperatures never increased enough. I decided we would try it this morning and I'd let the hounds decide if it was too cold or not. It was 10° and wind chill -2 with no wind. 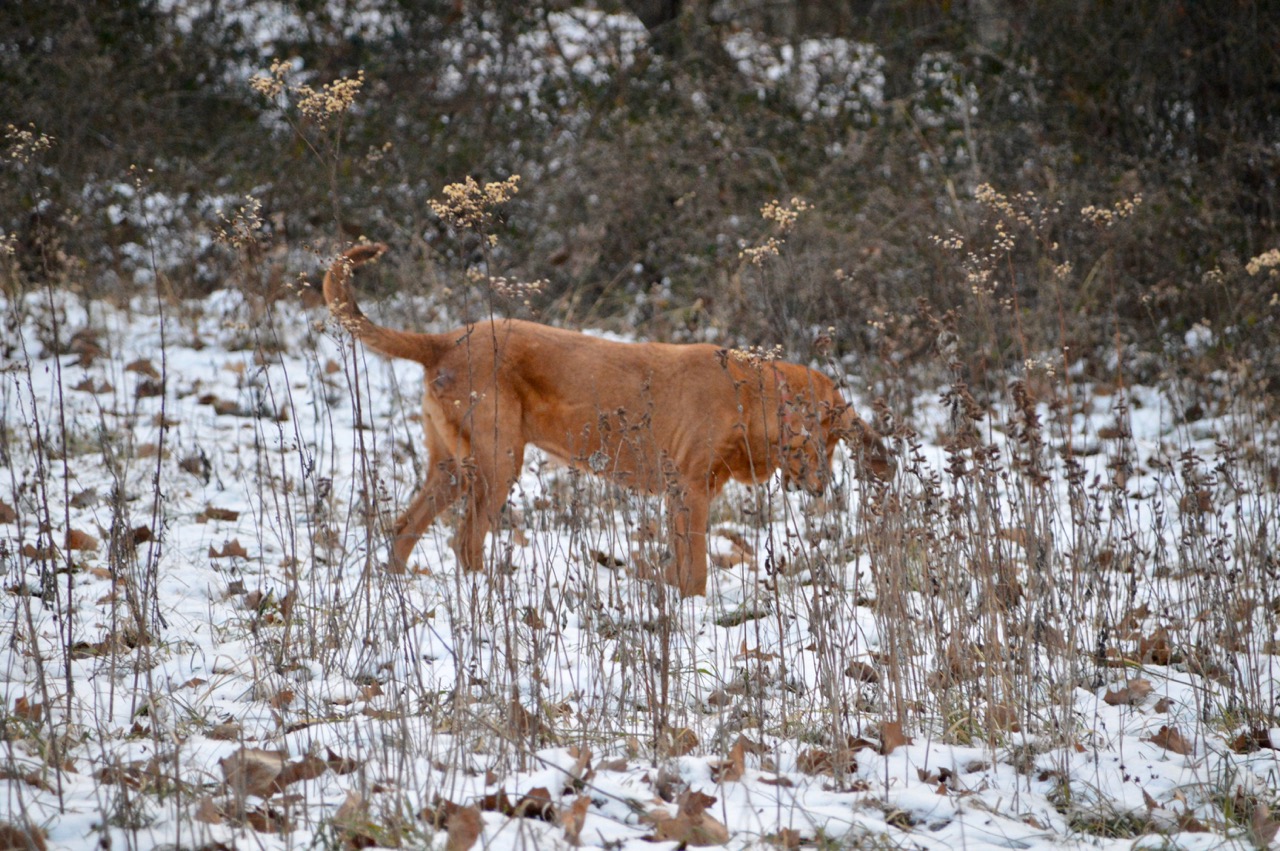 For any readers already yelling at me through their monitor, it's okay. None of our walks are longer than 15 minutes and almost every walk is finished around the 10 minute mark. I believe it's 30 minutes minimum in this kind of weather for frostbite to set in. Plus I trusted the hounds enough for them to tell me when it was time to go back inside. 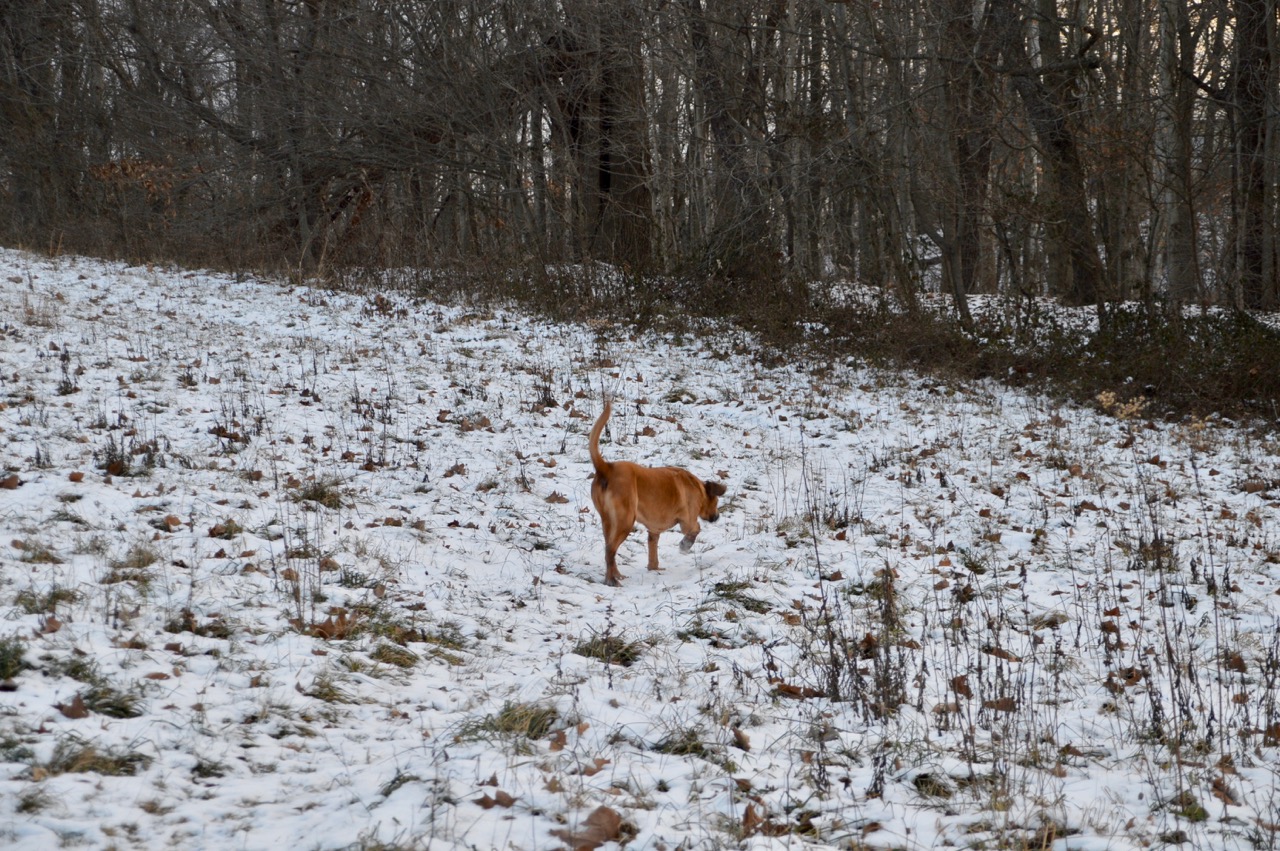 Sadie was thrilled that she was going be outside longer than just a few minutes to pee. Even Stella had moved way ahead of me ... so far so good. Yet I had a strong suspicion that we wouldn't get far today. The field was icy, slick for me when walking uphill. That -2° wind chill was stuck in my brain cells, possibly frozen there. 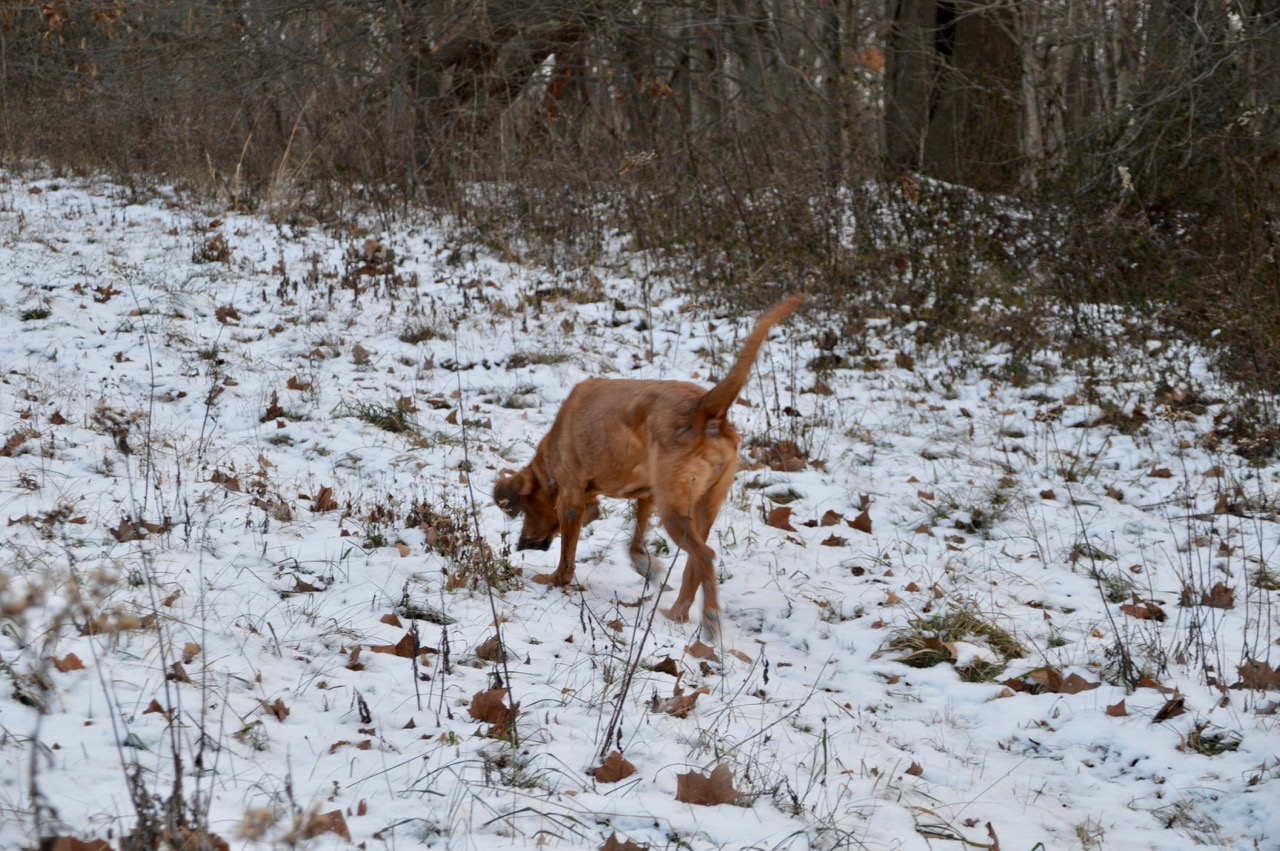 Stella was not only way ahead of me and Sadie ... she was trotting along the path. 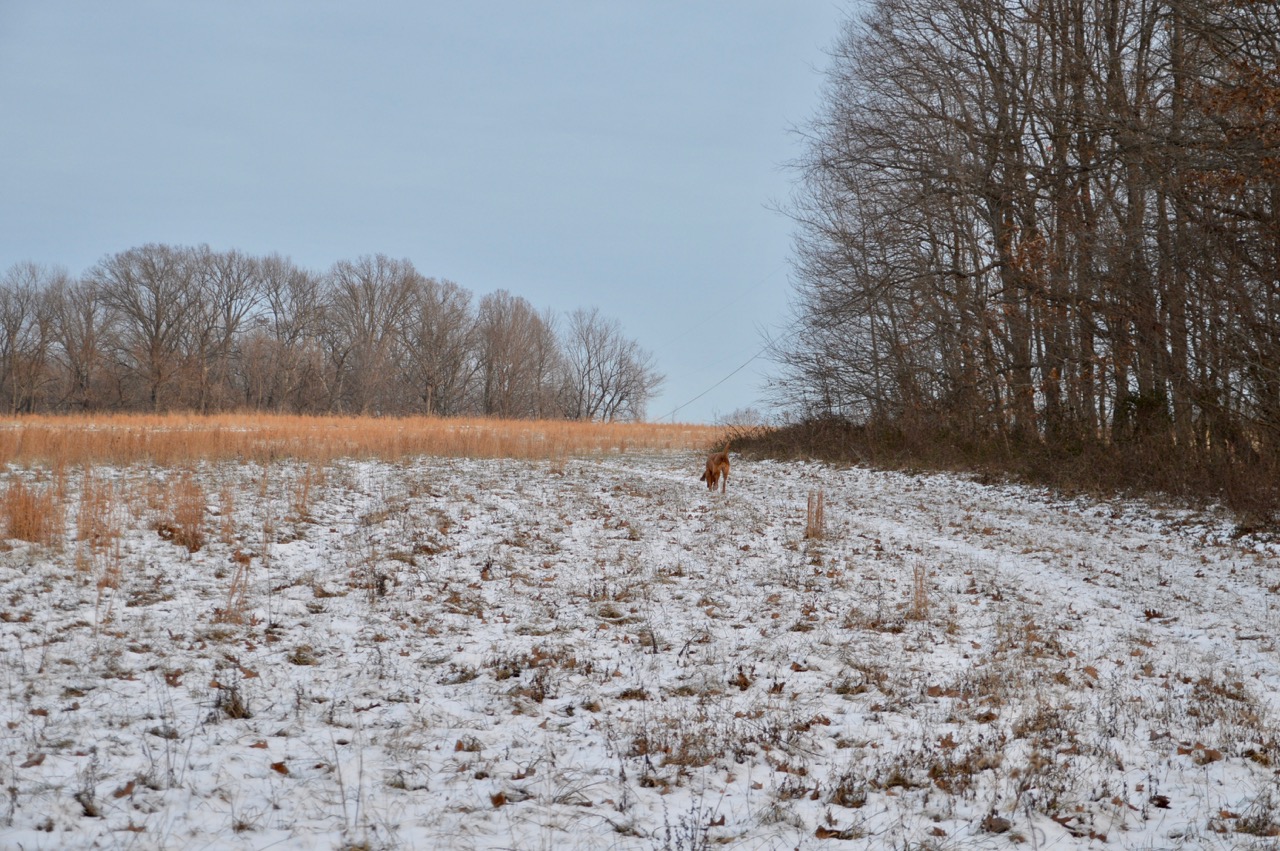 This gives you a better idea just how far ahead she was of Sadie and I. Yet it was Sadie who had been wanting to get on with her walk since 8am yesterday morning. So this was a little surprising to me, that Stella was the one that was leading the walk and was in a hurry. 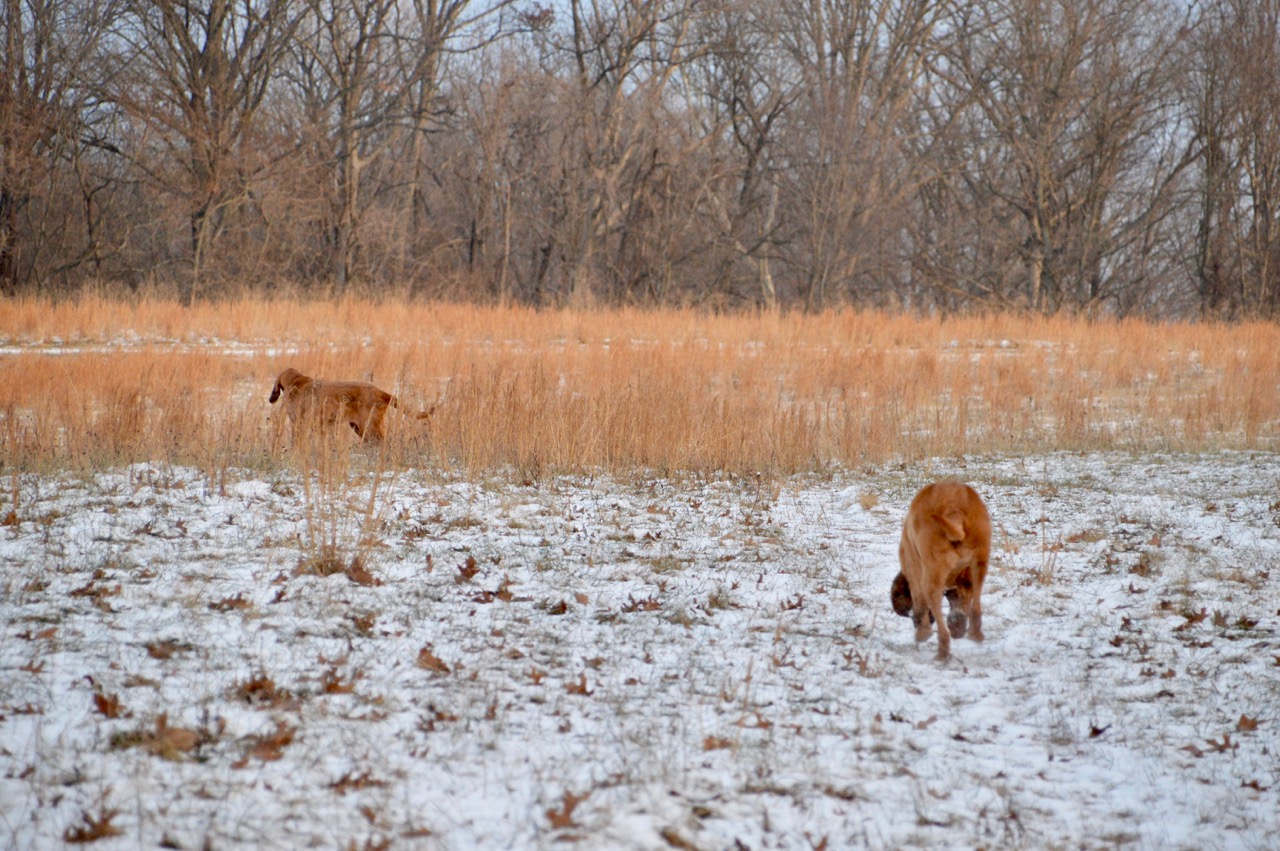 While I have written the past few days of our cold weather in 'the tropics' I know it's nothing compared to the 62" of snow in Pennsylvania or the -39° temps on the north border of Minnesota. Compared to those two places, we are having a mild winter for these 5-7 days. Once it gets back up into the mid 20's that will feel like a heat wave to us. 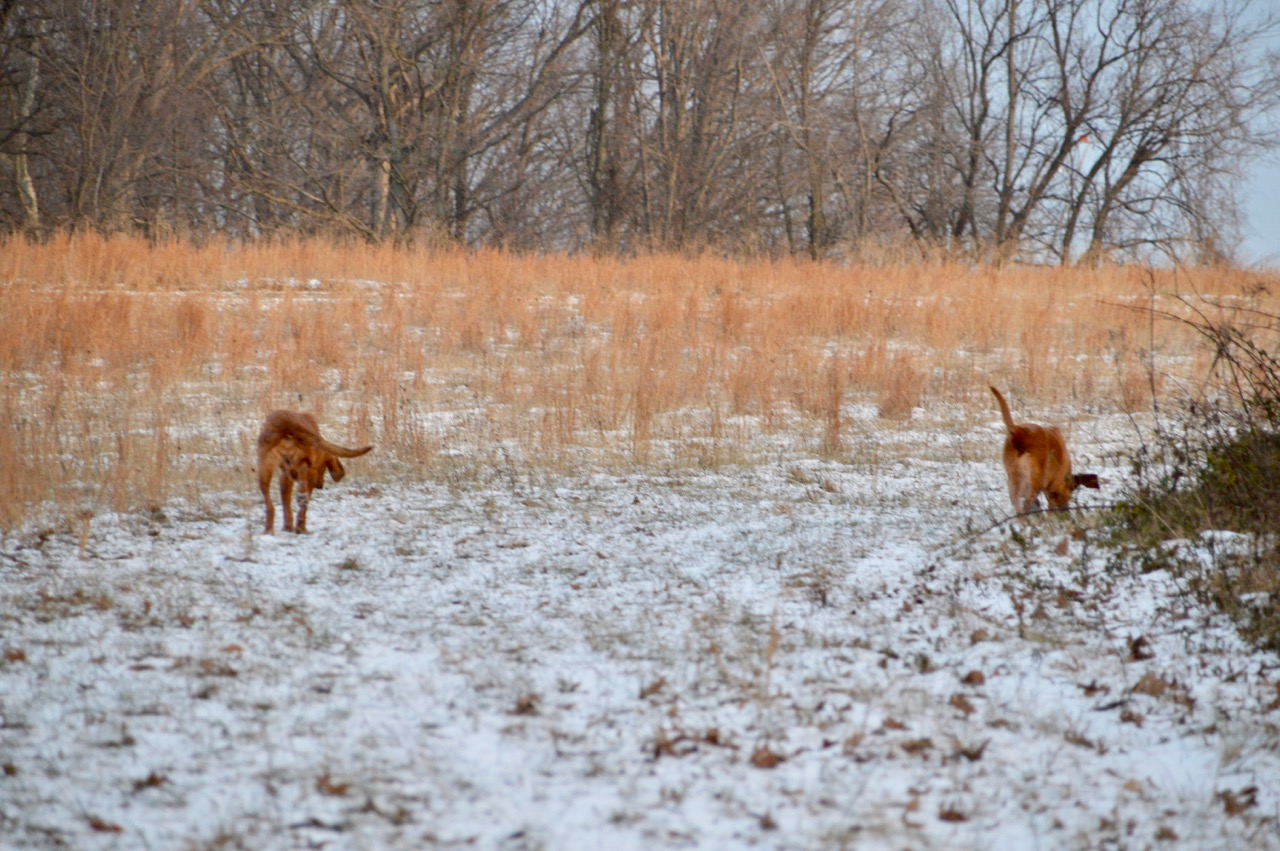 About the time we hit the first turn I was beginning to think the hounds were going to drag me through this half mile walk whether I wanted to come or not. That's Sadie on the right, with her nose down and high energy. Stella was in a slow trot. 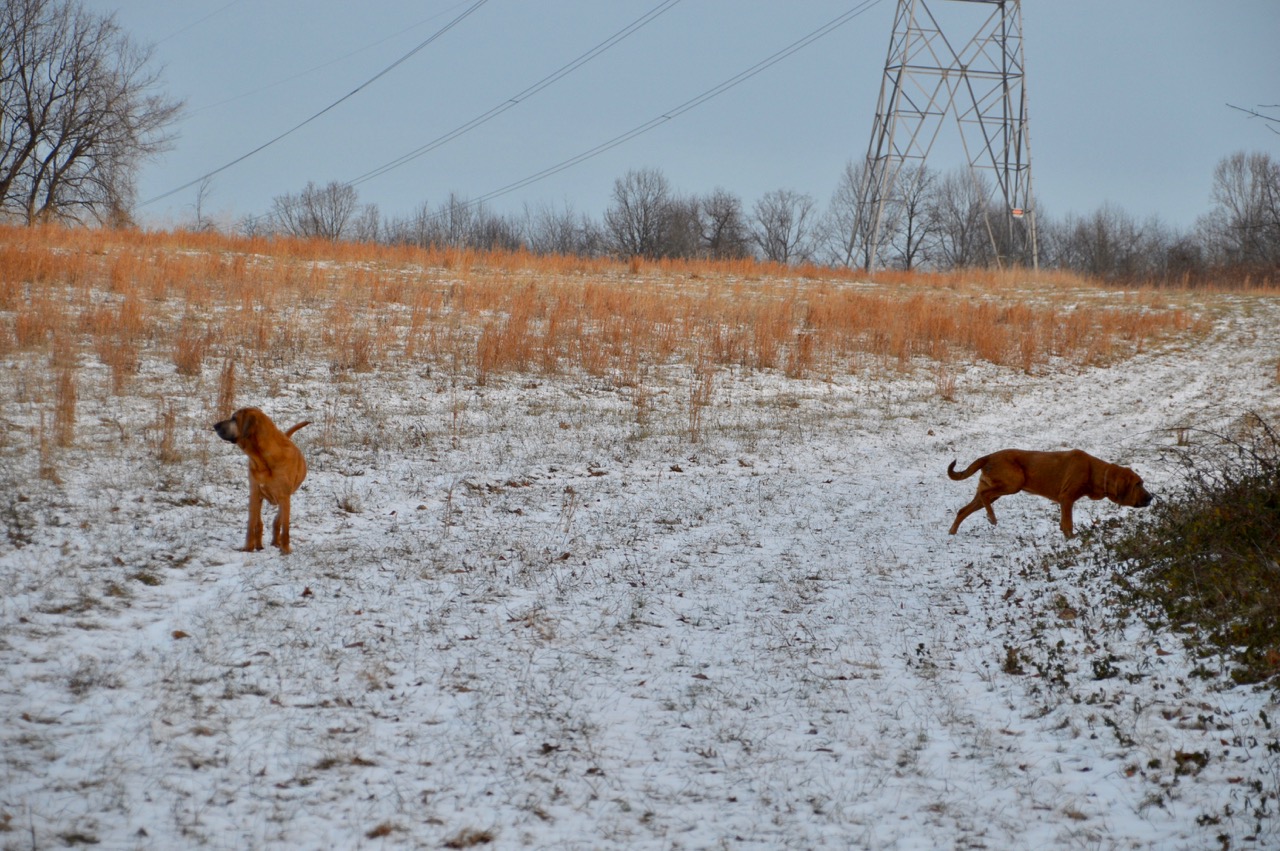 Then ... I saw the sign it was too cold. Stella wanted to walk into that brush but hesitated just a moment and raised her left rear paw. Just about the time she tried to walk into the brush raised paw and all ... I yelled her name and said "let's go home". 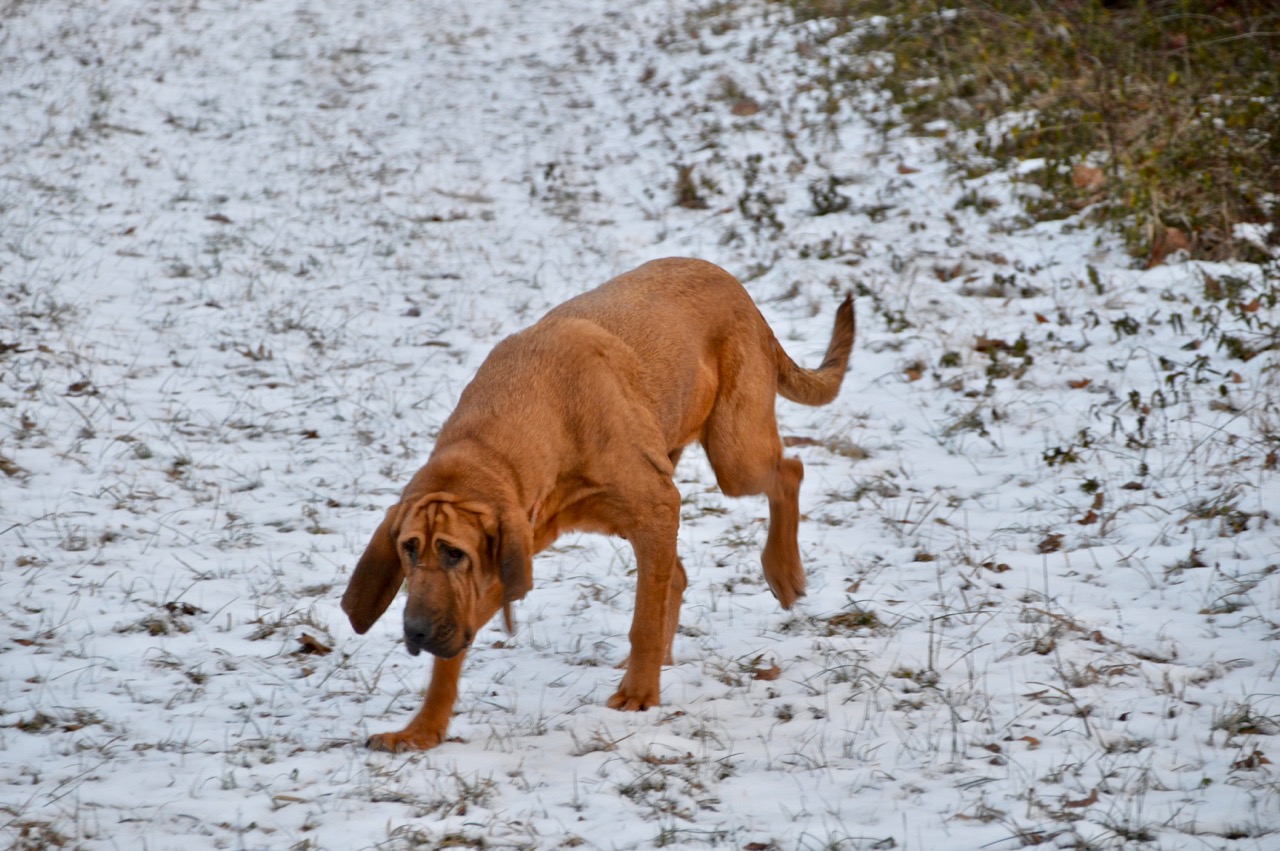 That's all she needed to hear. She turned toward me immediately and slowly walked my way on the path. With Sadie running in front of her to lead the way, Stella and I walked slowly back home. She wasn't limping and was able to put that paw on the ground while she walked but it took time to get back to the yard. 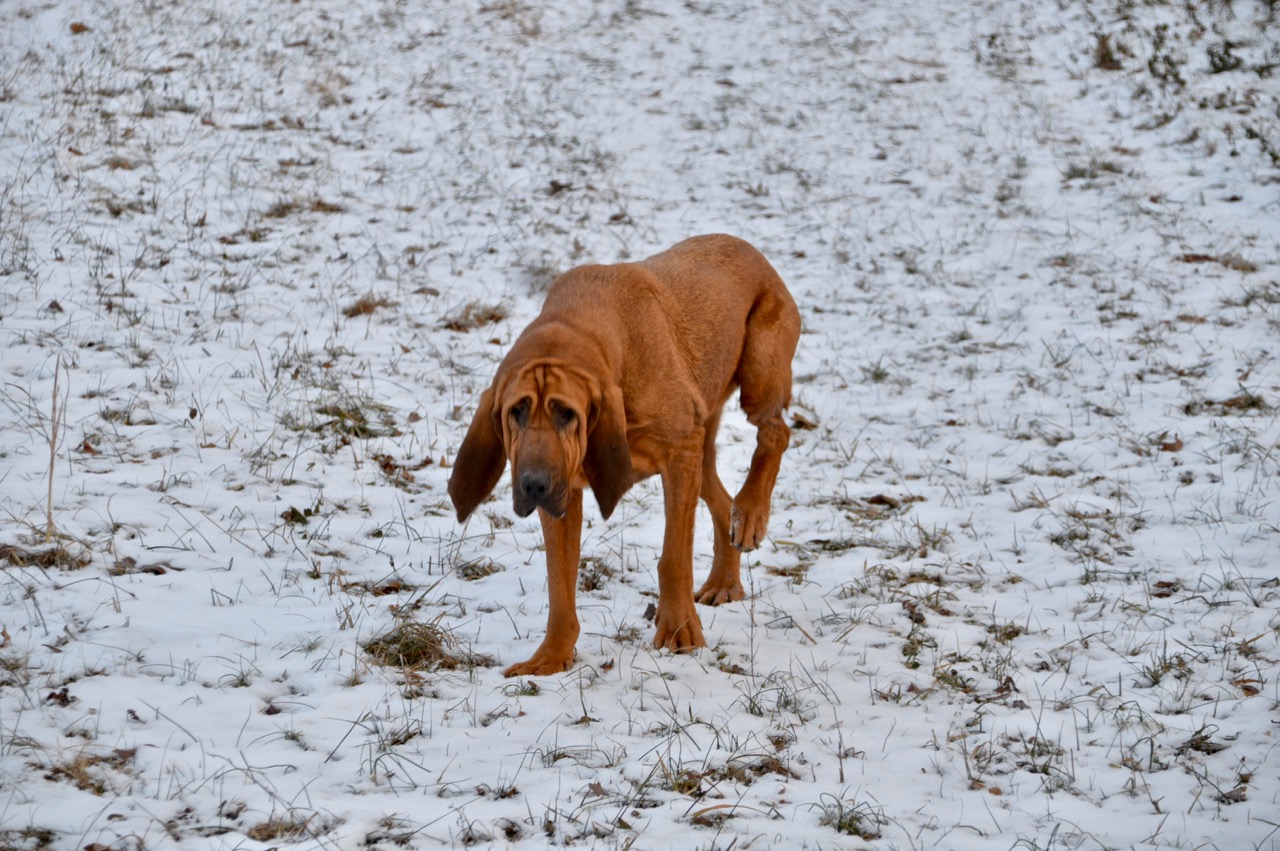 When we were about to the yard, she had to check out one more thing in the field. 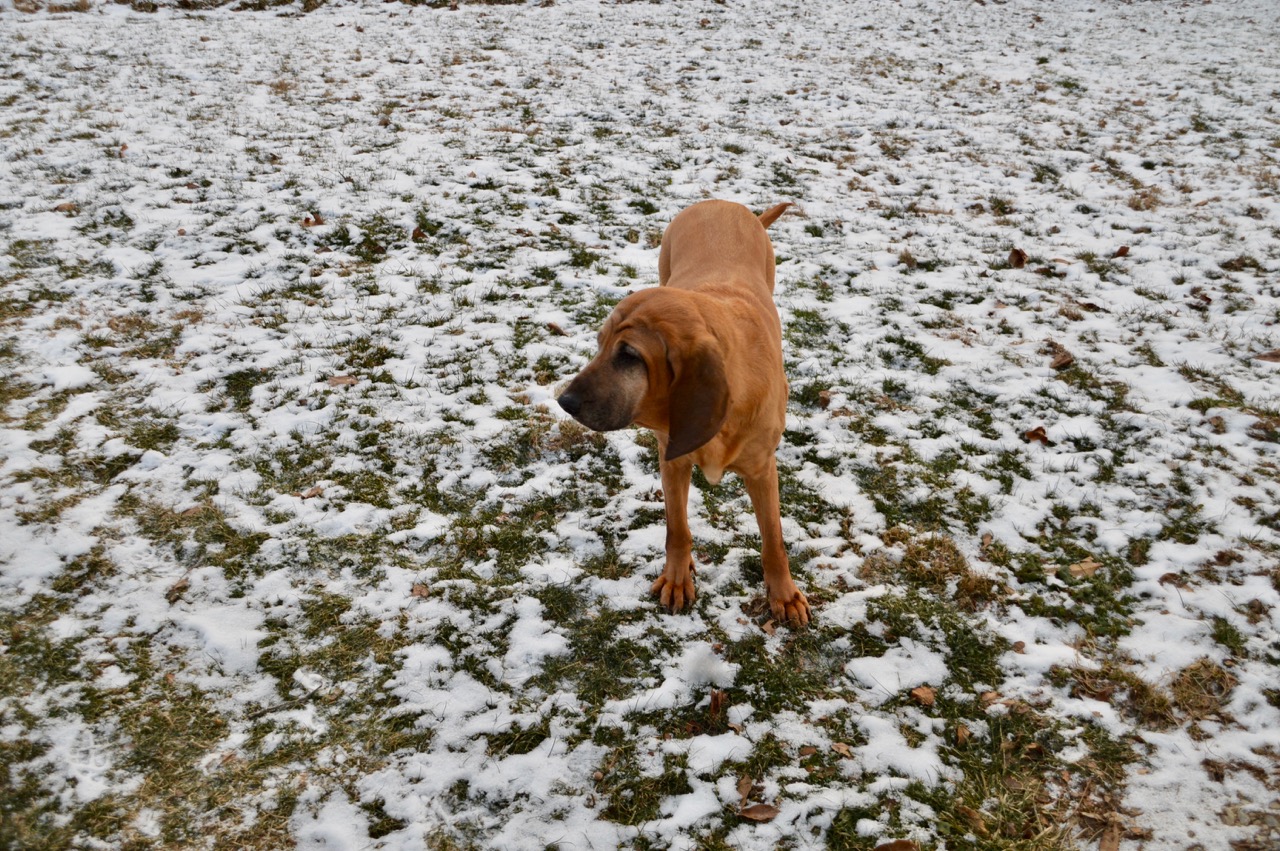 Sadie thought there was still a chance that we would go back outside to start the walk over again, but not this morning. By 1pm it is suppose to be up to 25° and we can walk then. 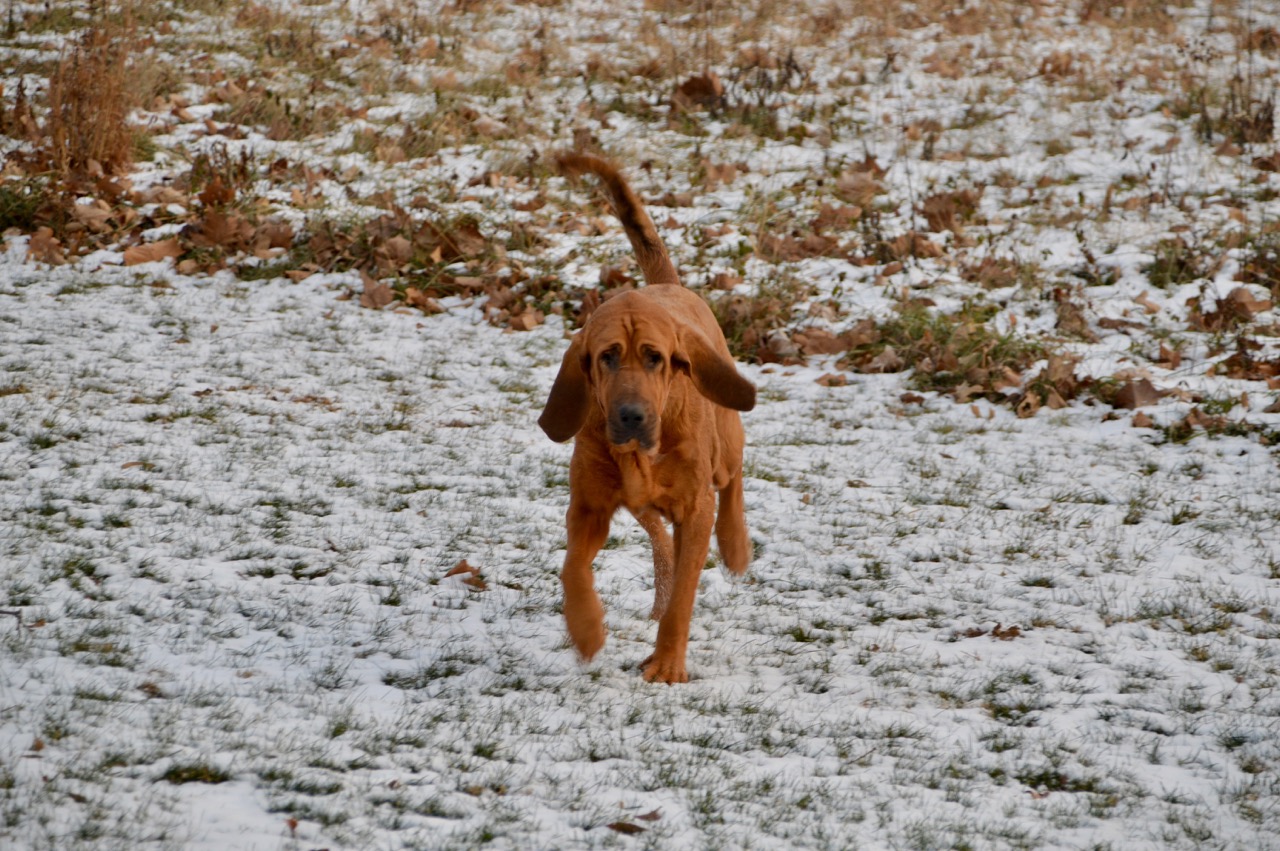 Once Stella saw me standing at the corner of the house, she was more than happy to move into a fast trot and didn't stop until she nudged the storm door with her nose, wanting to go inside.

I too had a little cabin fever yesterday. Tried to read different books but couldn't focus long enough to read. Nothing interested me on tv, and I didn't feel like watching any football games again last night. I haven't watch a bowl game yet mostly because I've had no interest in any of the teams or match-ups playing. Plus, I have finished my movie watching marathons.

I might be back later today with some afternoon photos. IF it gets to 25° from the 12° it is now, that will feel like a heat wave to me and Sadie ... we will have to get outside if that happens.

Thinking of Spring this morning in 'the tropics' of Southern Indiana.
at December 28, 2017