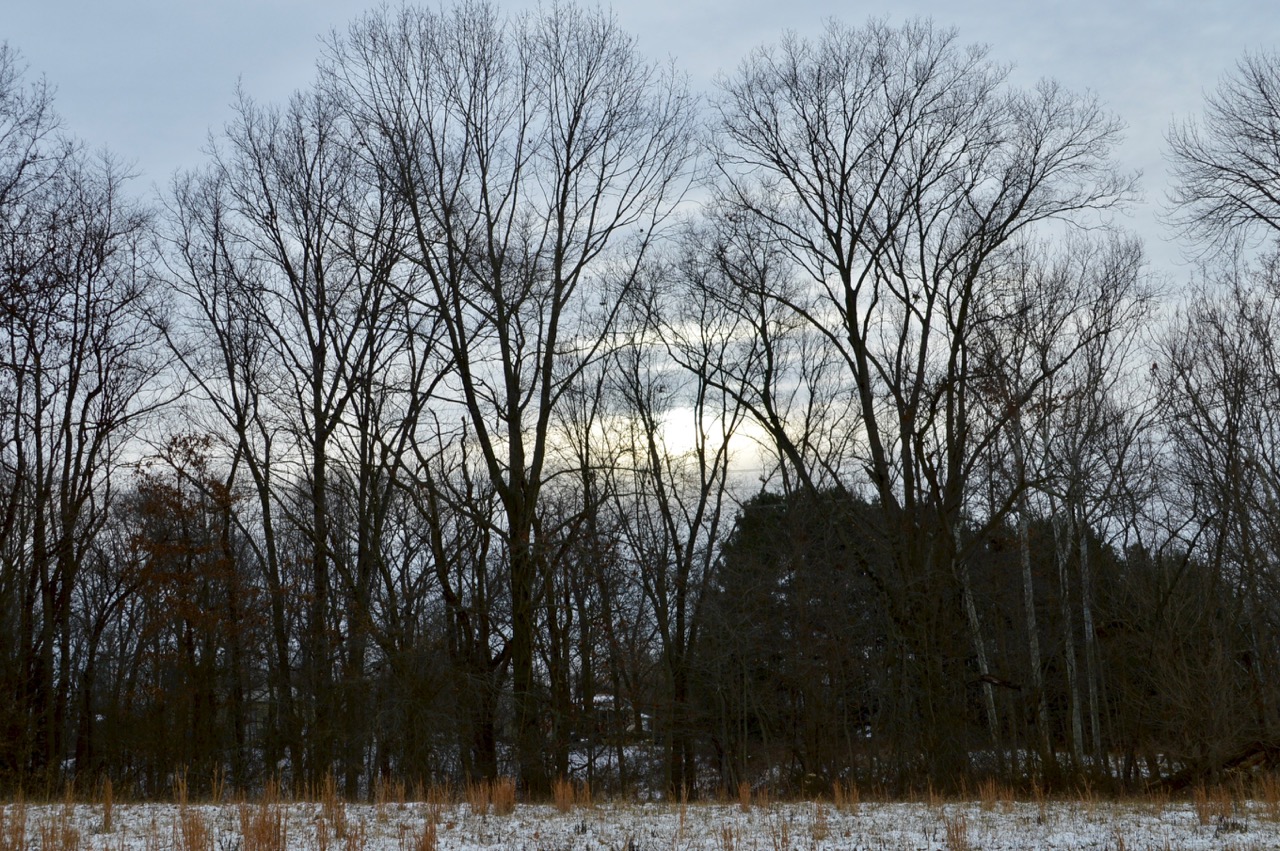 Everything outside looked freezing cold this morning and it was. It was a few degrees colder than yesterday so I was interested in seeing what Stella would do this morning. We took a walk yesterday afternoon a little after 4pm and 3° warmer and she completed the walk with no issues. I am guessing she may have picked up some frozen snow between her toes yesterday morning and that made her turn around. 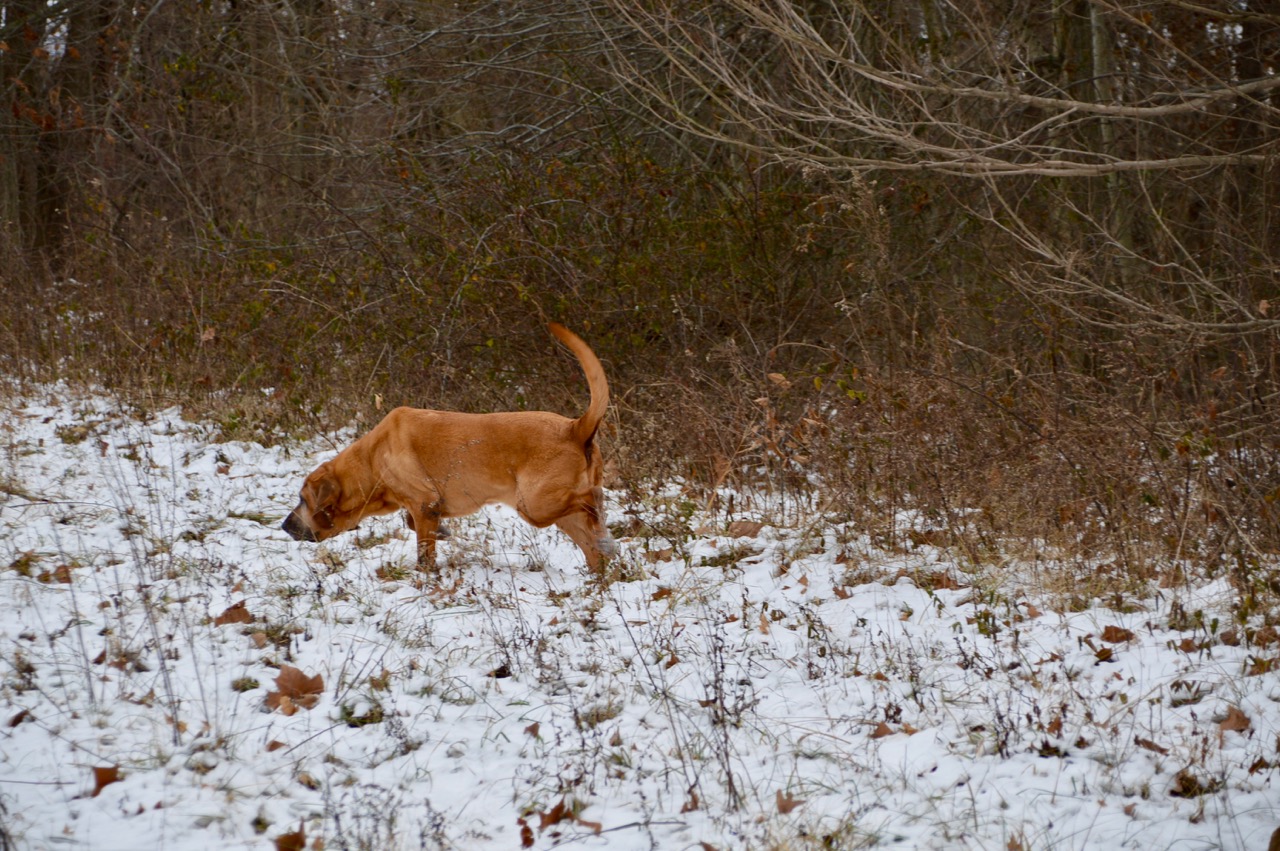 I find it a little surprising that I really don't mind this cold weather. It's part of living in the Midwest, happens every year, and I am just as comfortable in cargo shorts and t-shirts in the summer as I am in a down parka, ski cap and ski gloves in the winter. Sadie doesn't seem to mind either. 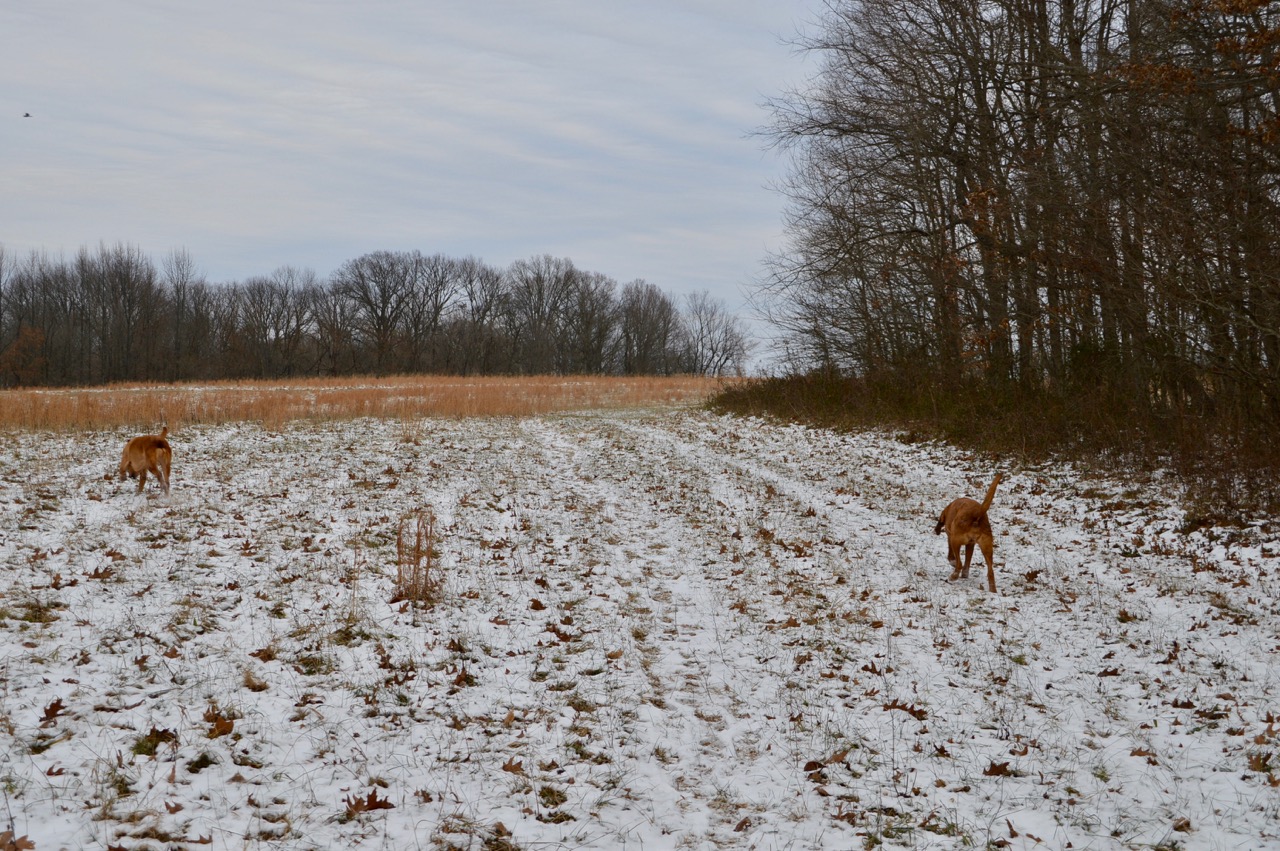 With the frozen snow crunching under my boots the hounds headed out with new scents in front of them. The deer traffic is taking place when we are not around. I could see a few new deer tracks as we started our walk. 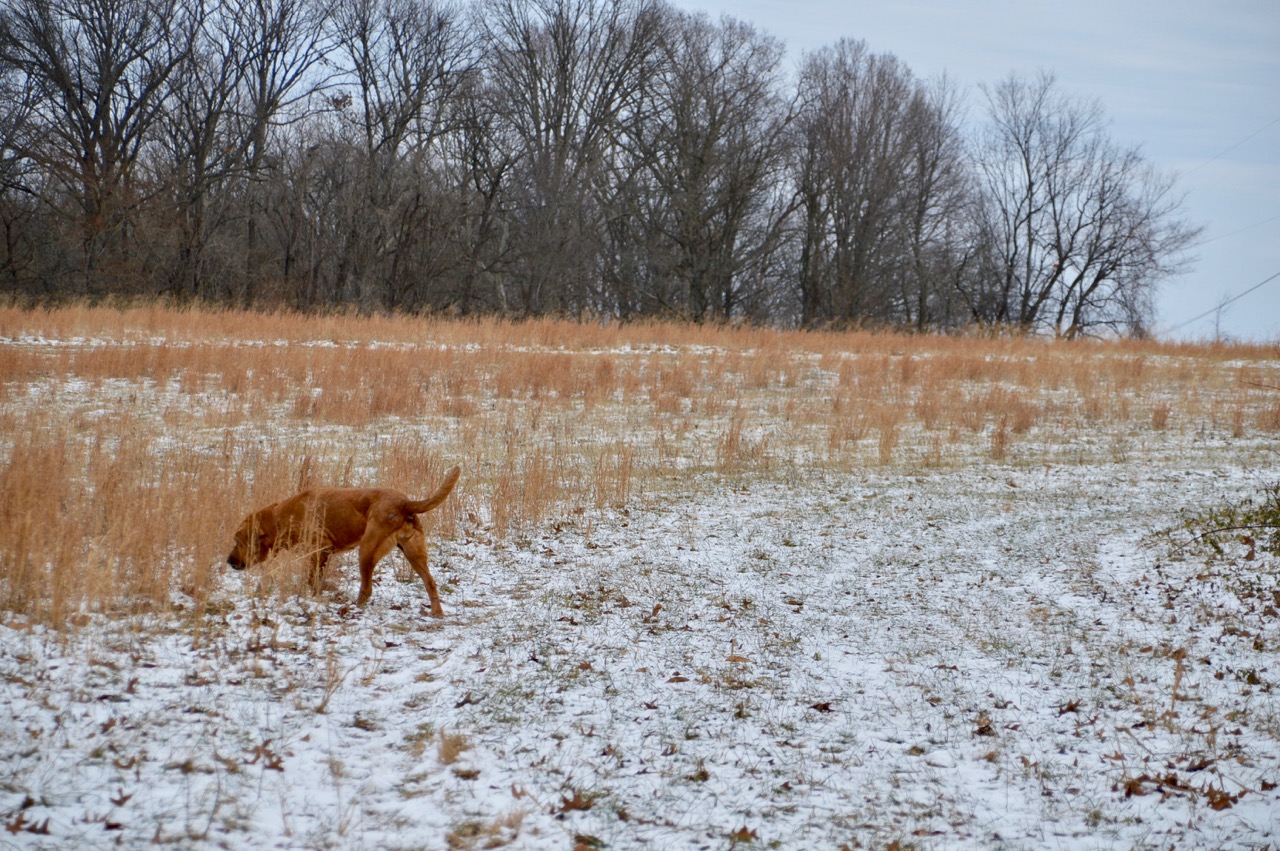 While both hounds veered left to the middle of the front field, I followed my path and kept an eye on Stella to see if she was showing any signs of being cold. It was 16° this morning at 9am. I had a feeling that Stella was not going to join us and was hesitant in going on and leaving her behind. 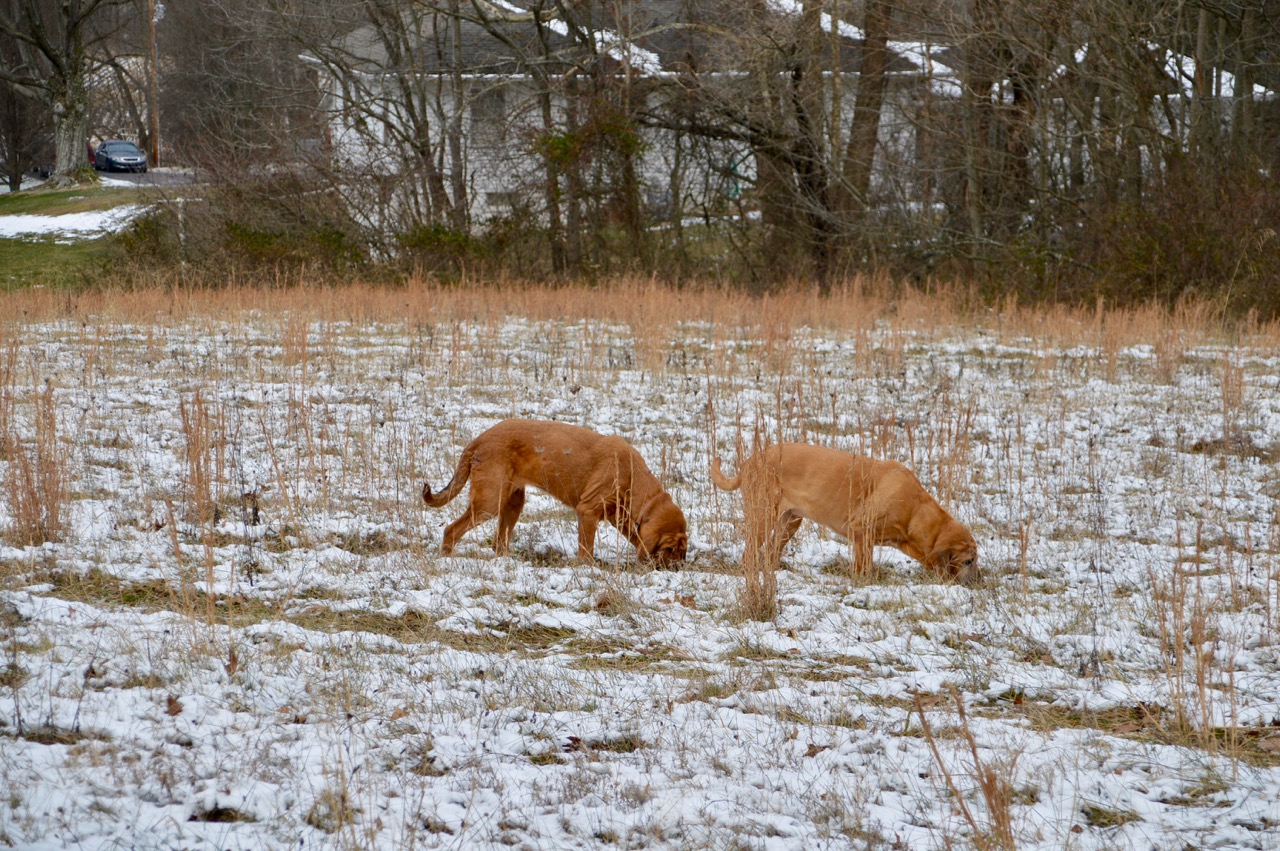 It was a pretty quiet Christmas Day here in 'the tropics' yesterday. Nothing was open in a 12 mile radius except for one Chinese restaurant. My local Chinese place took a two week vacation over the holidays for the first time in 15 years. This other restaurant was also a buffet, a lot more seating and shocked me as I walked in ... the place was 3/4 full. By the time I returned home, all the carbs put me in a nap mode ... I found no problem sleeping while it was bright and sunny outside. 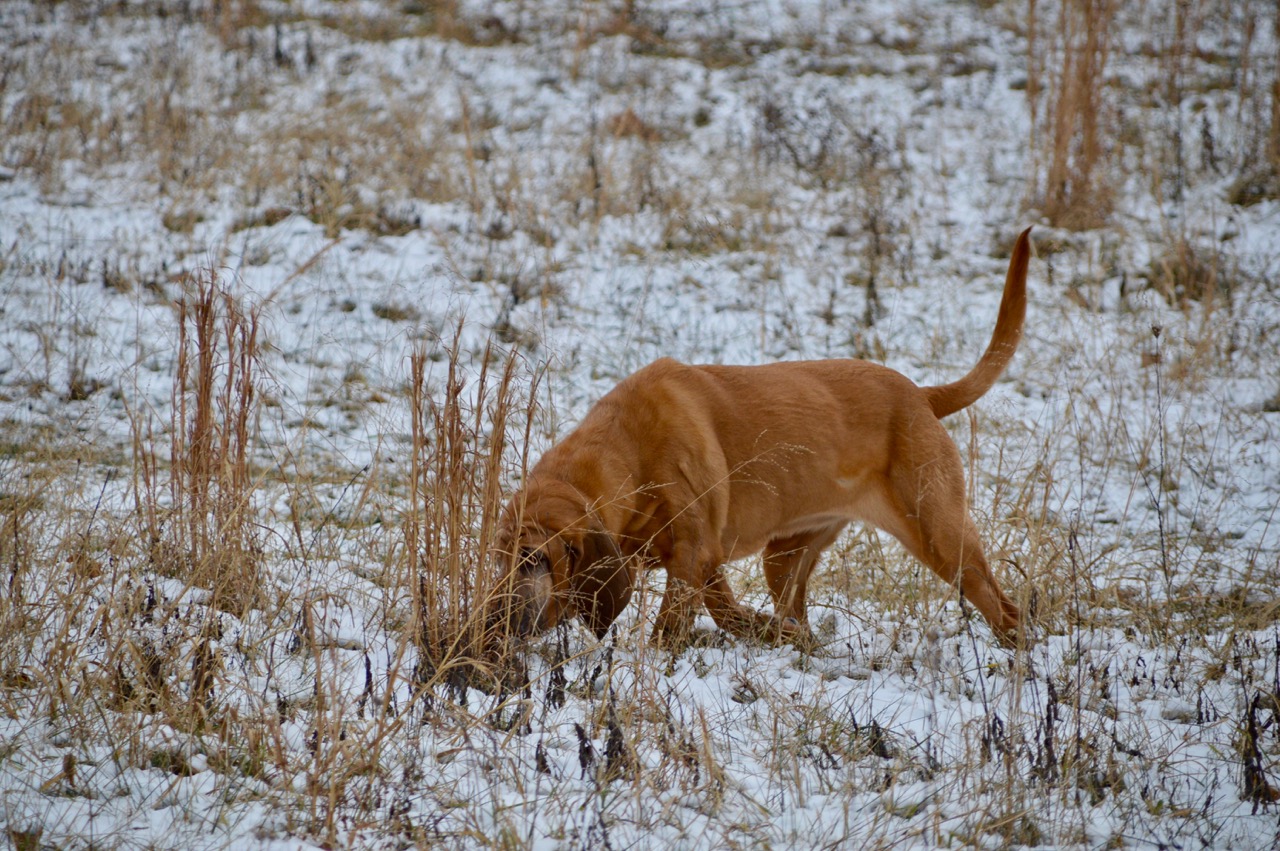 Sadie did what she did yesterday in her exploring. She was everywhere, running from spot to spot. 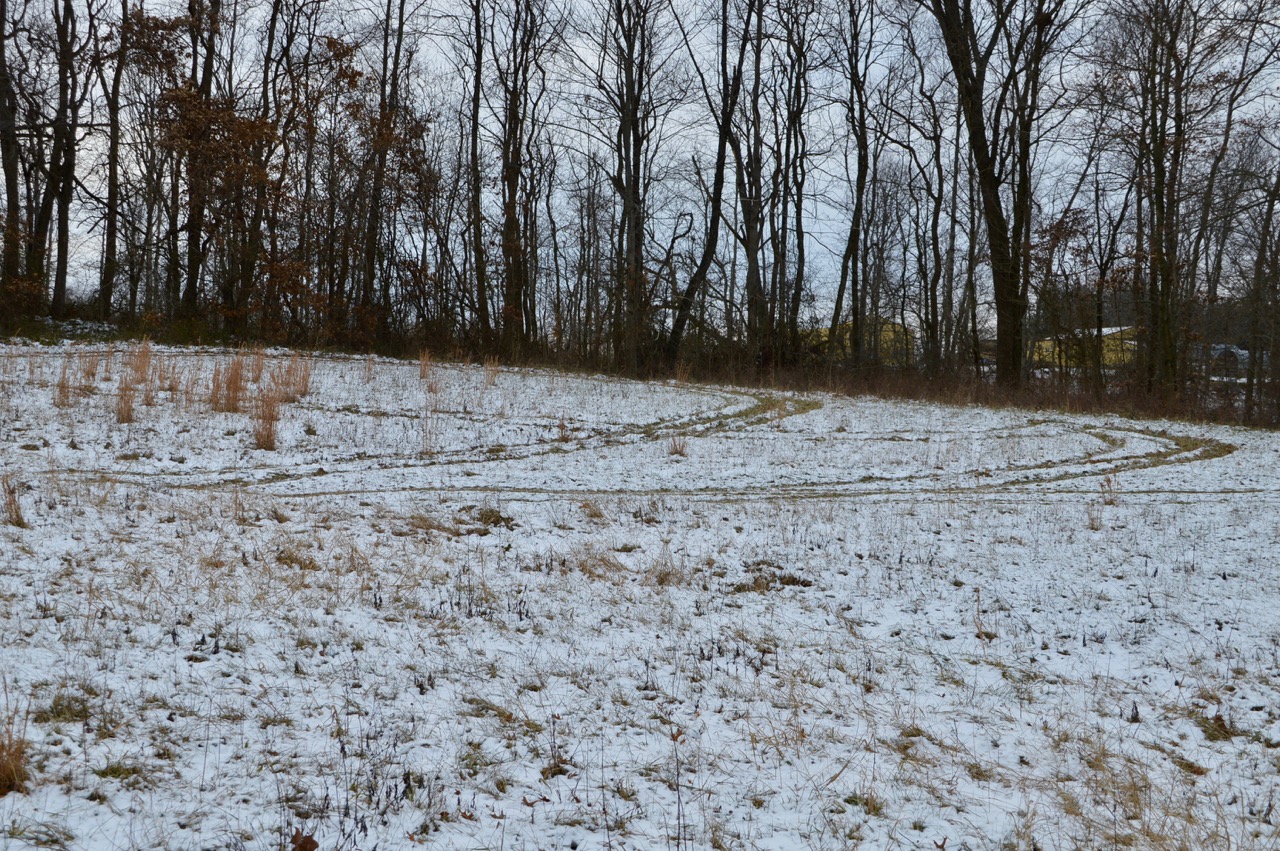 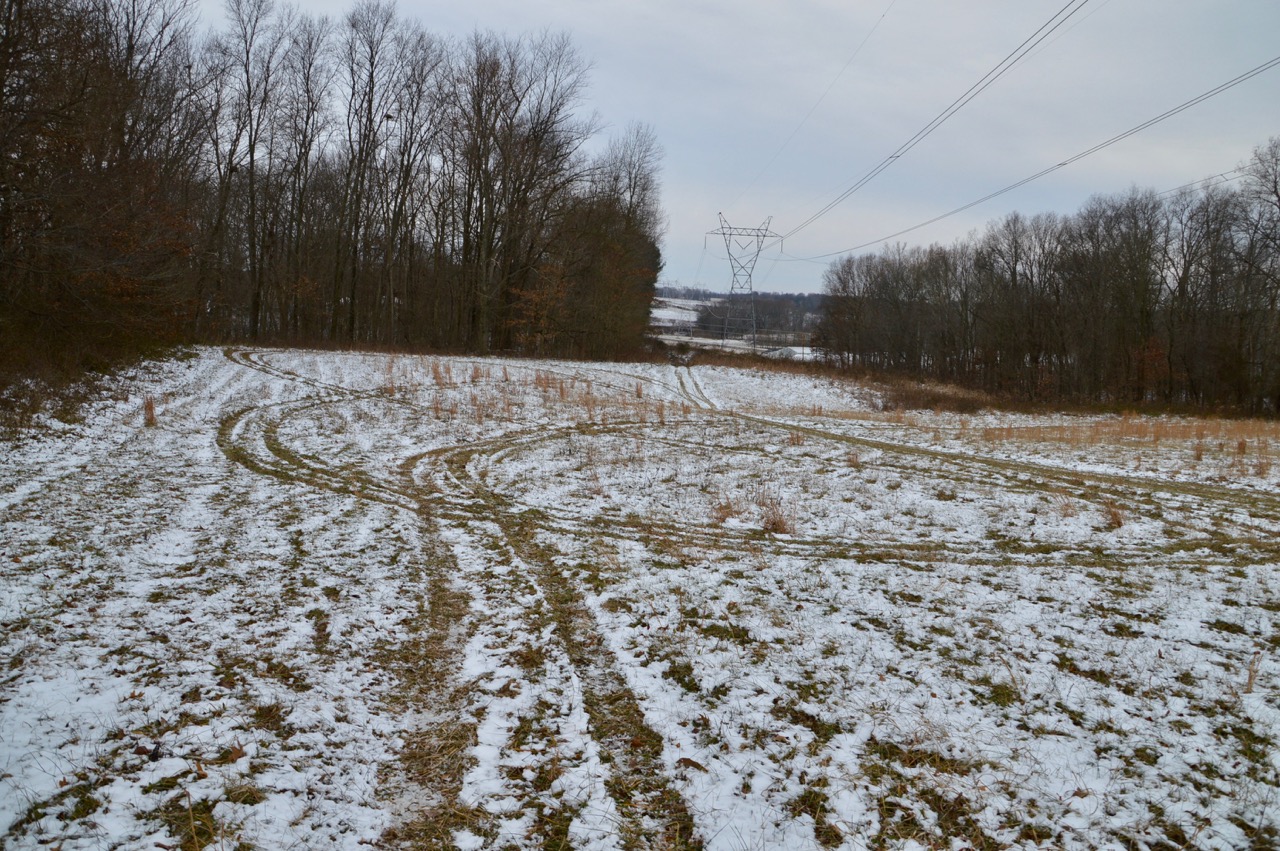 We noticed yesterday afternoon that the neighbor had been doing a lot of ATVing on Christmas Day. I wondered if he got a ATV or new gear for Christmas. 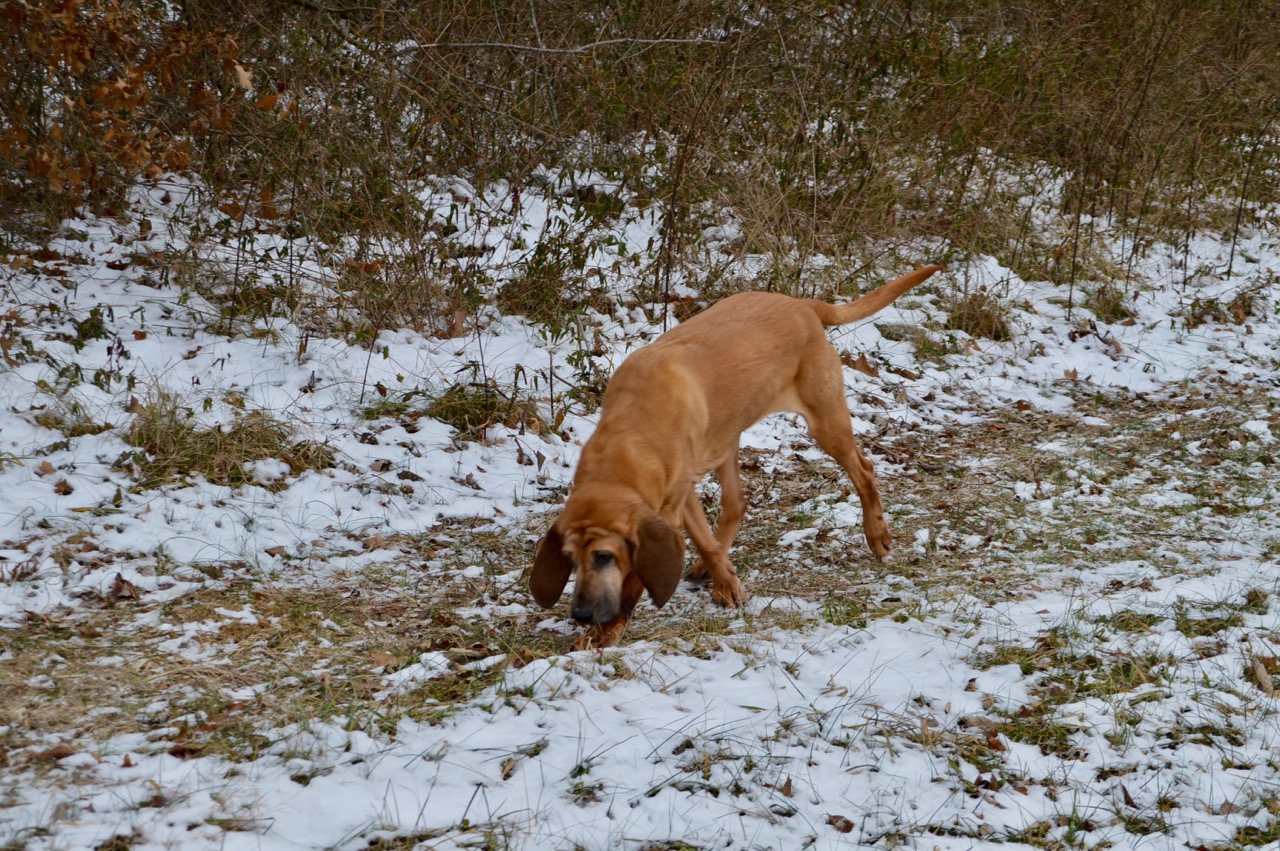 Sadie continued to follow her nose along the normal route of the deer based on some of the tracks I have seen in the past. It's along the back edge of the field heading north past the electrical tower and into the woods. 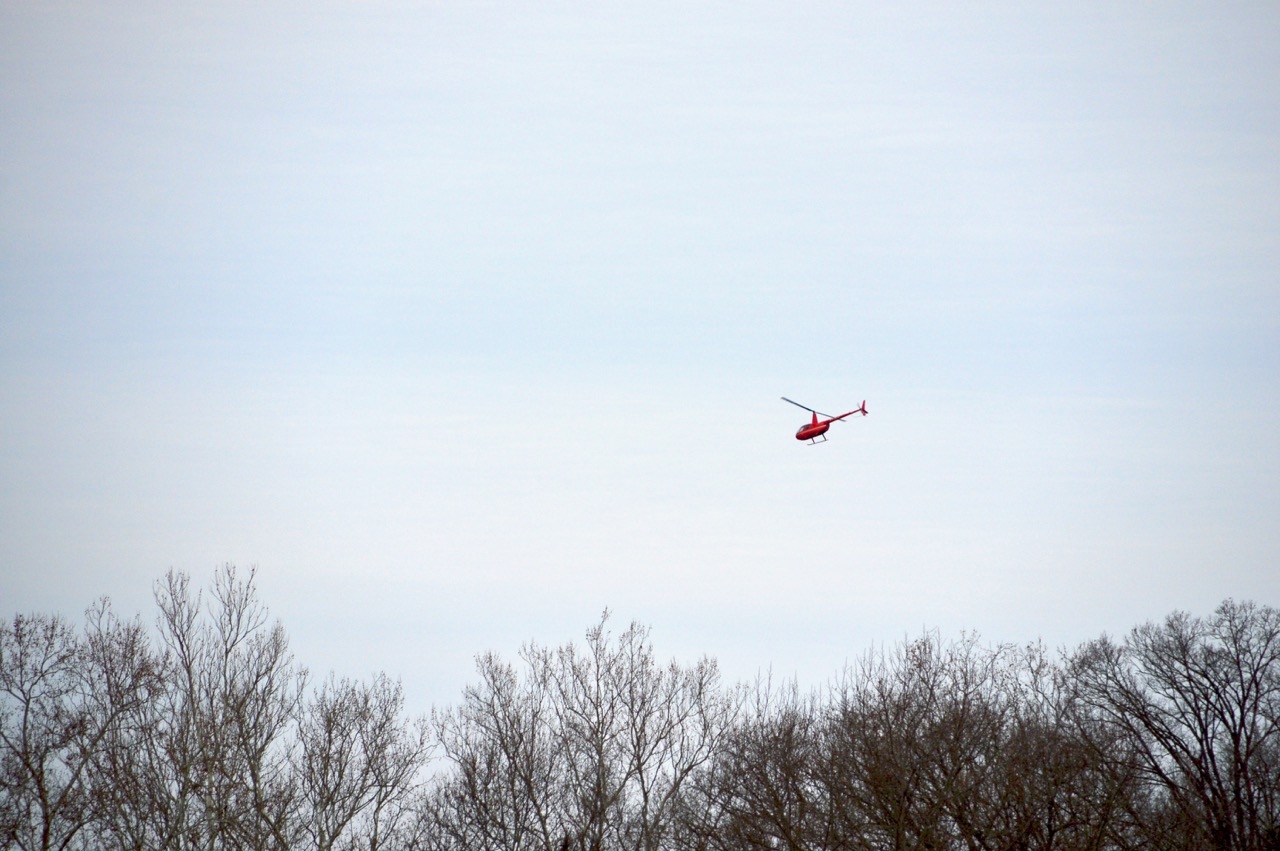 I guess the red helicopter we saw last week had nothing to do with Santa Clause since it was back today, surveying the same area as last week. 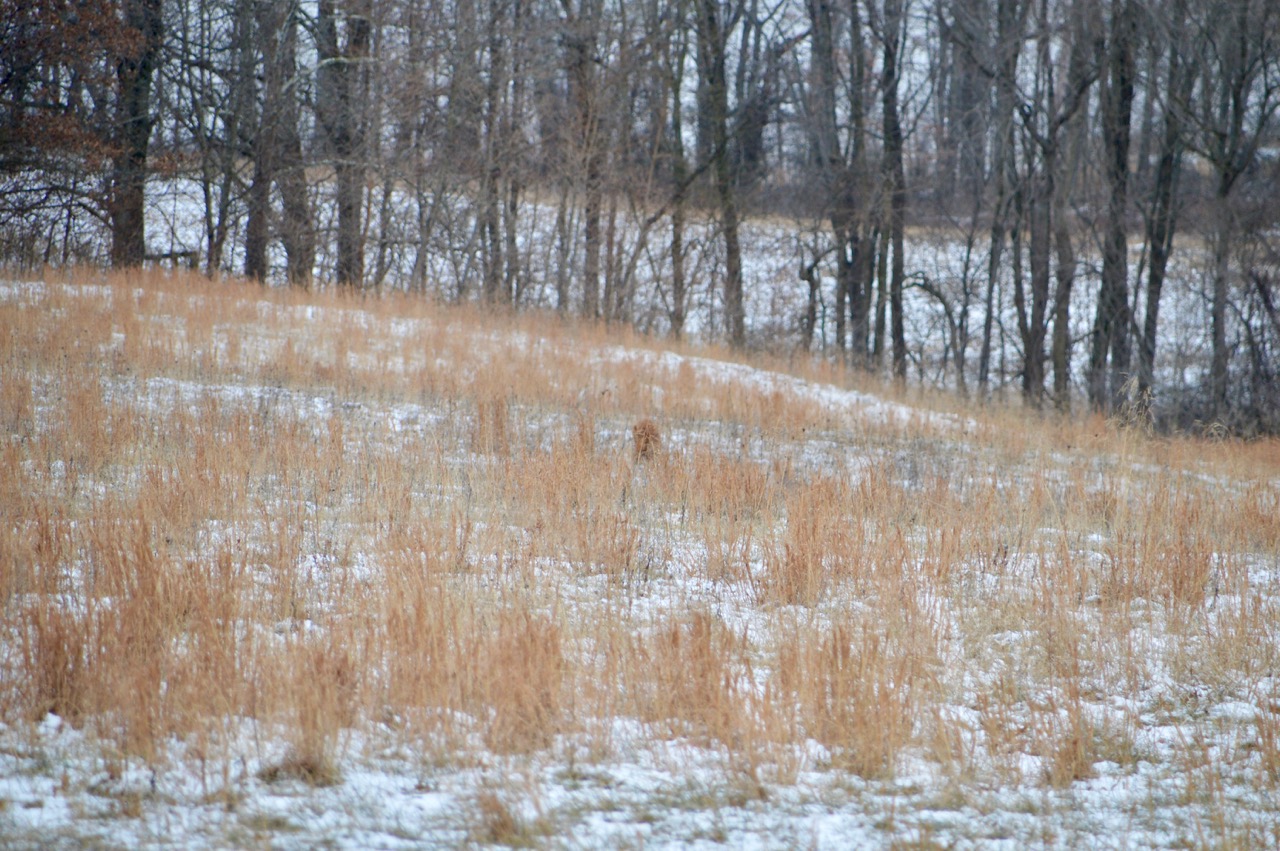 I was happy to see that Stella was in the general vicinity and reachable when we used the alternate path we take home. Of course she ignored all calls of her name, never even raised her head to acknowledge that she heard me. It took a while but she gradually meandered our way the closer we got to her. 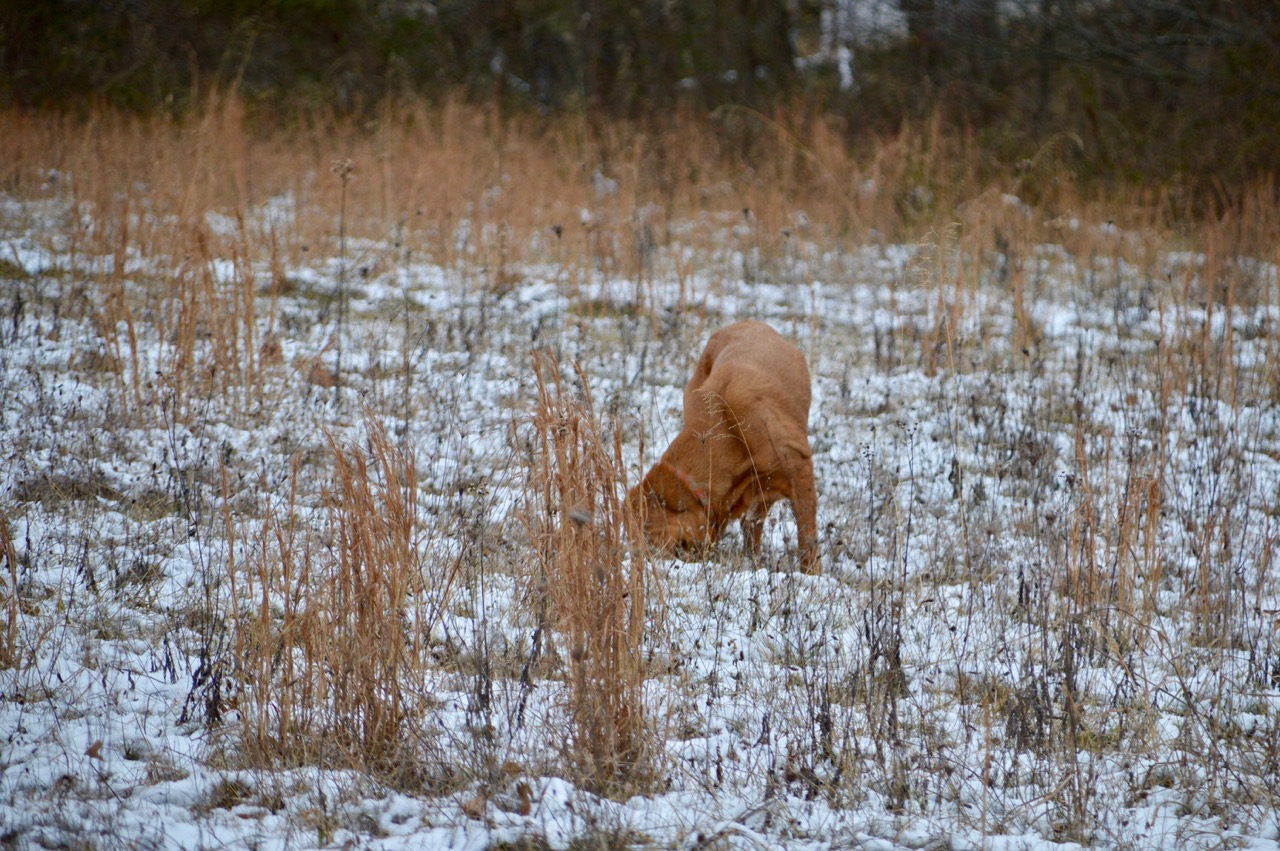 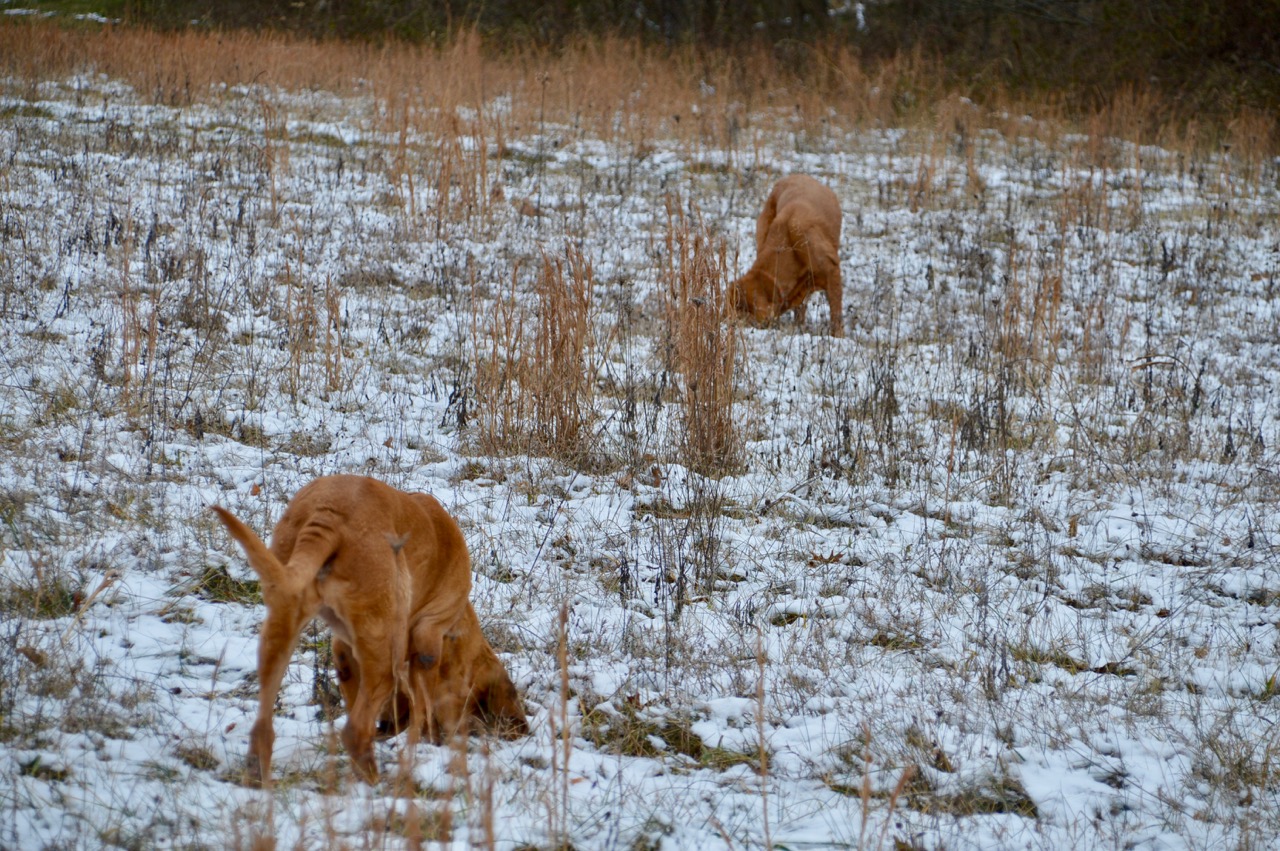 As I walked past both hounds I was beginning to think that neither one of them was going to come back inside but with the temperatures in the teens and a single digit wind chill factor, leaving them outside was not an option. 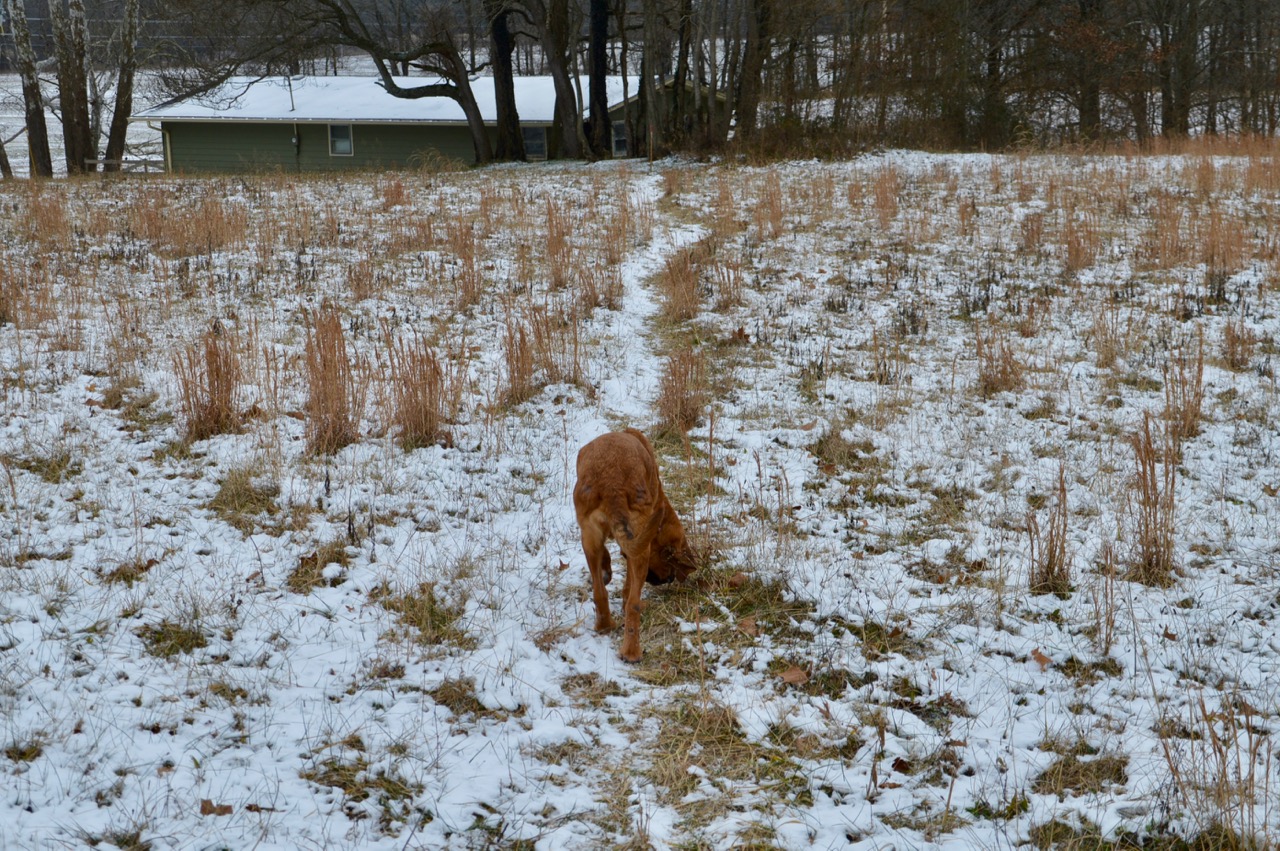 It wasn't fast but Stella finally made it back to the yard.

With the temperatures never warming up, it was still 18° at 4:35pm, we didn't make it outside the rest of the day. It was an afternoon of watching movies and trying to stay warm.

It was a good day here in 'the tropics' of Southern Indiana.