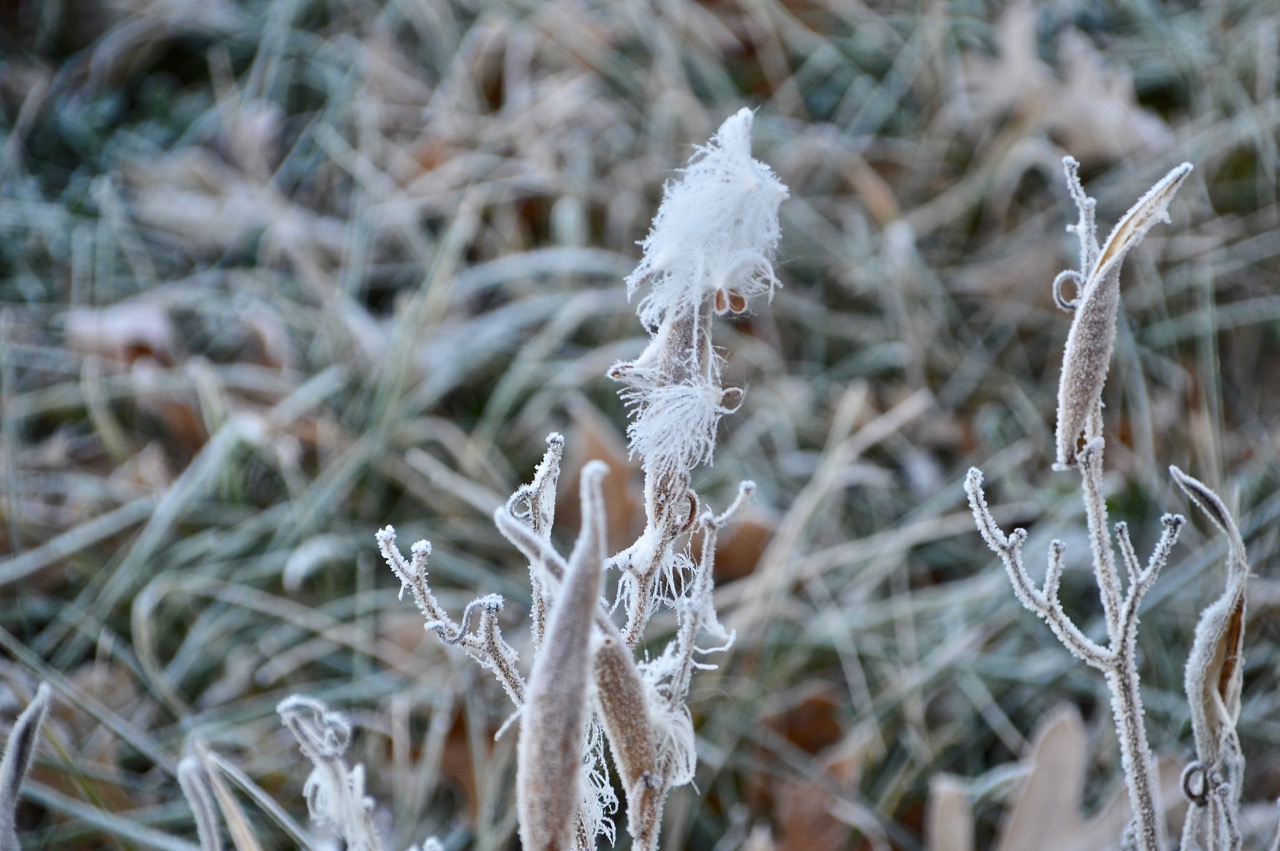 Looks like December was trying to bring in some winter weather this morning. I could tell it was cold, the bloodhounds acted like it was cold because they were energized more than normal. Heidi was too ... she used her energy to crawl deeper under her sleeping bag. No way she goes outside in this stuff ... until lunch was served. 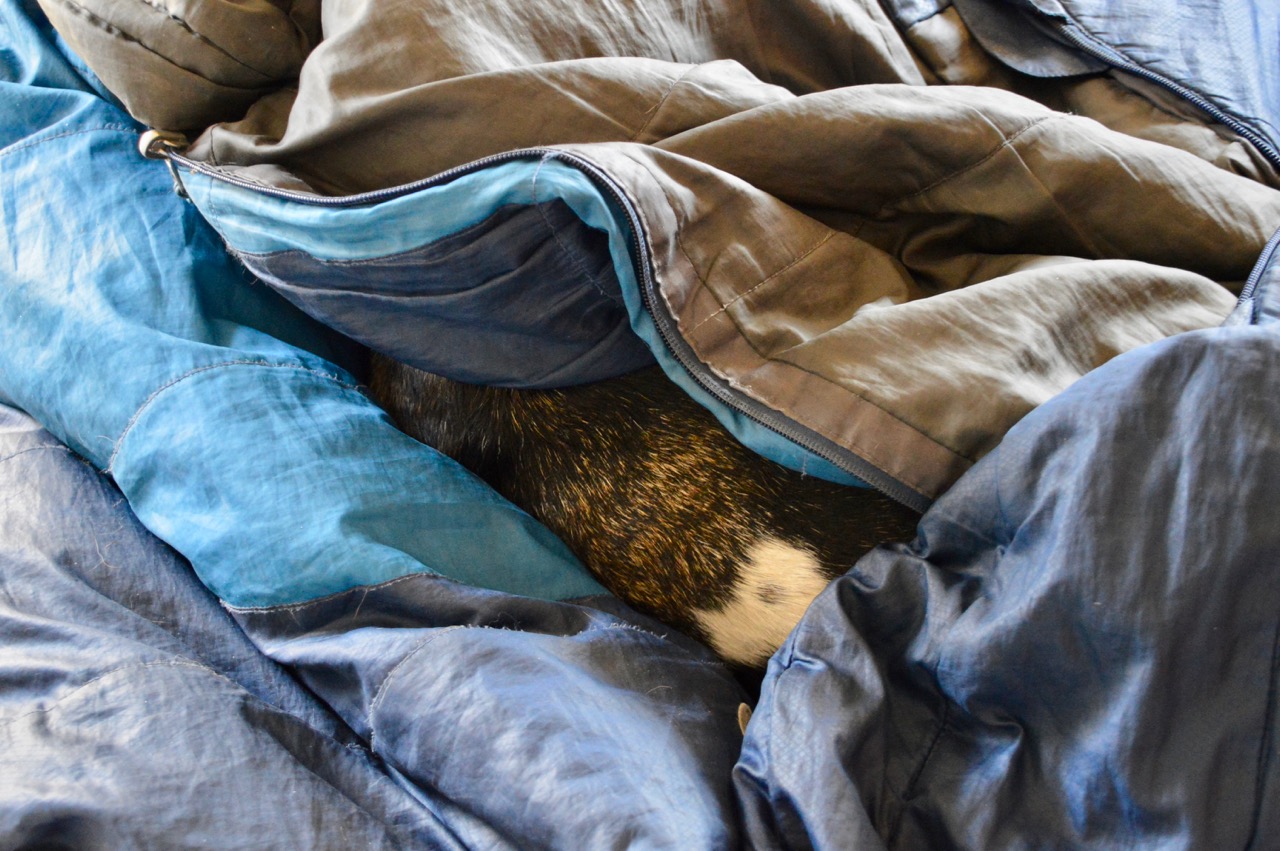 Although I had not left the yard yet, I could hear the frozen field crunching under the heavy paws of Stella and Sadie running. There is something about feeling the crisp freezing air during a morning walk. 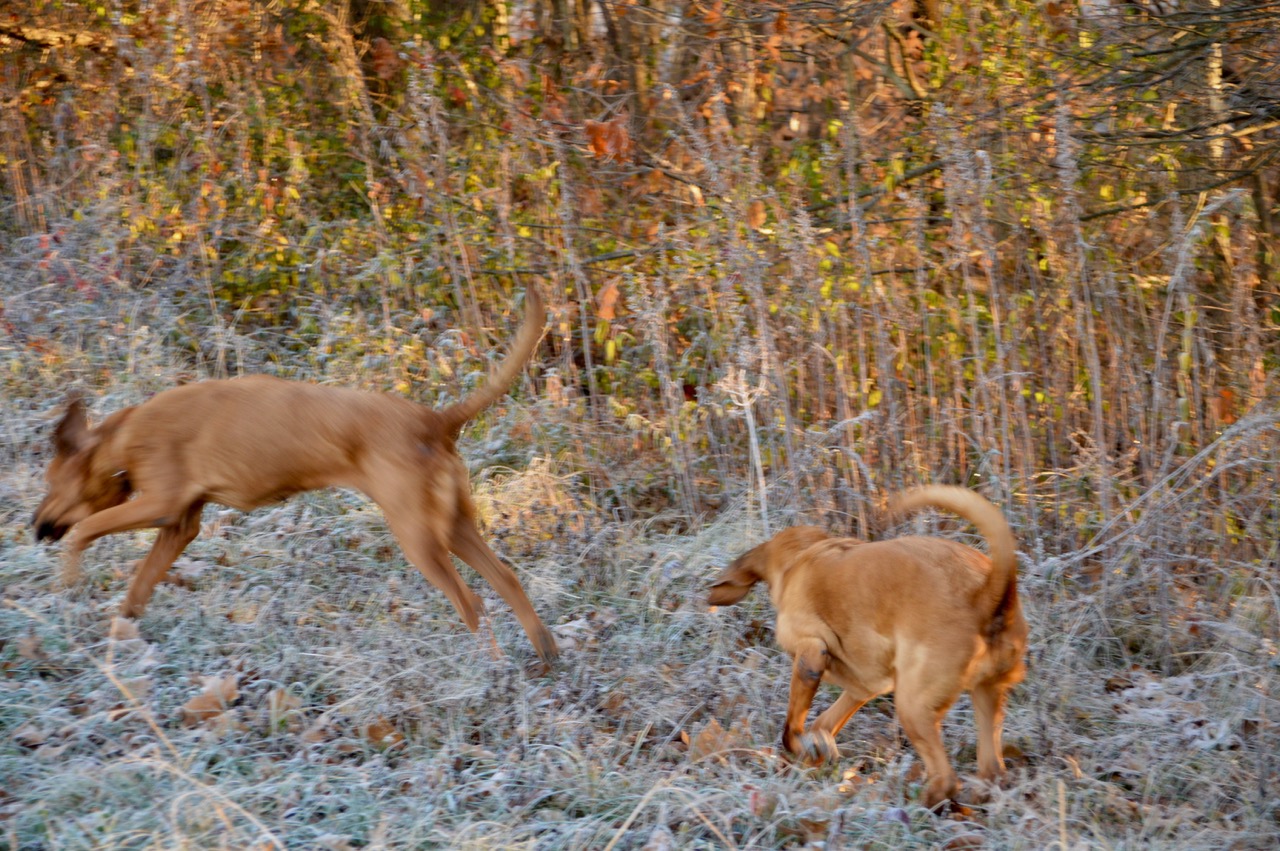 Neither of them were going to wait on me. They knew where they were going and I did to. I wonder if Stella will ever take another morning walk any further than this first turn? Her routine will change eventually ... I think. 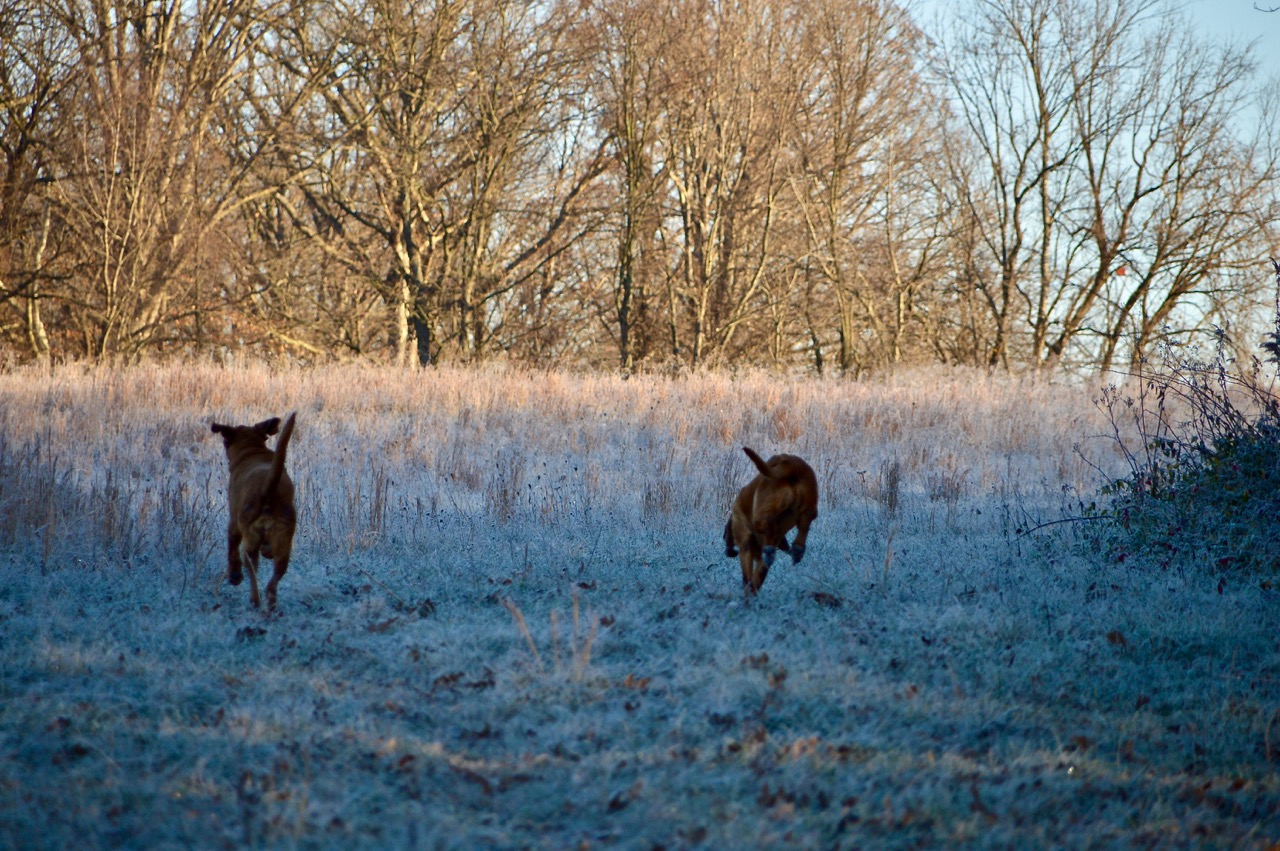 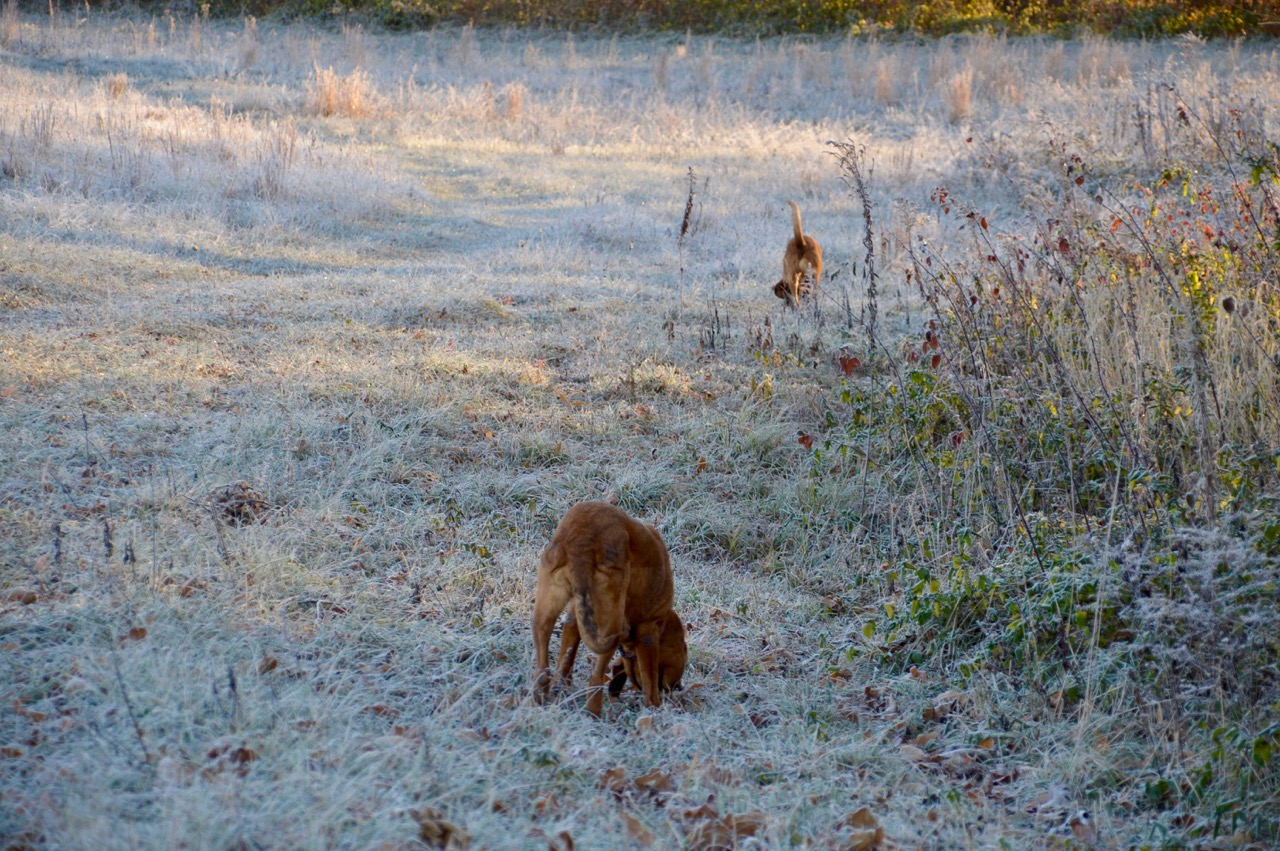 I stop calling her and telling her to "come on" at this point, it's a lost cause. Let her do what she wants. 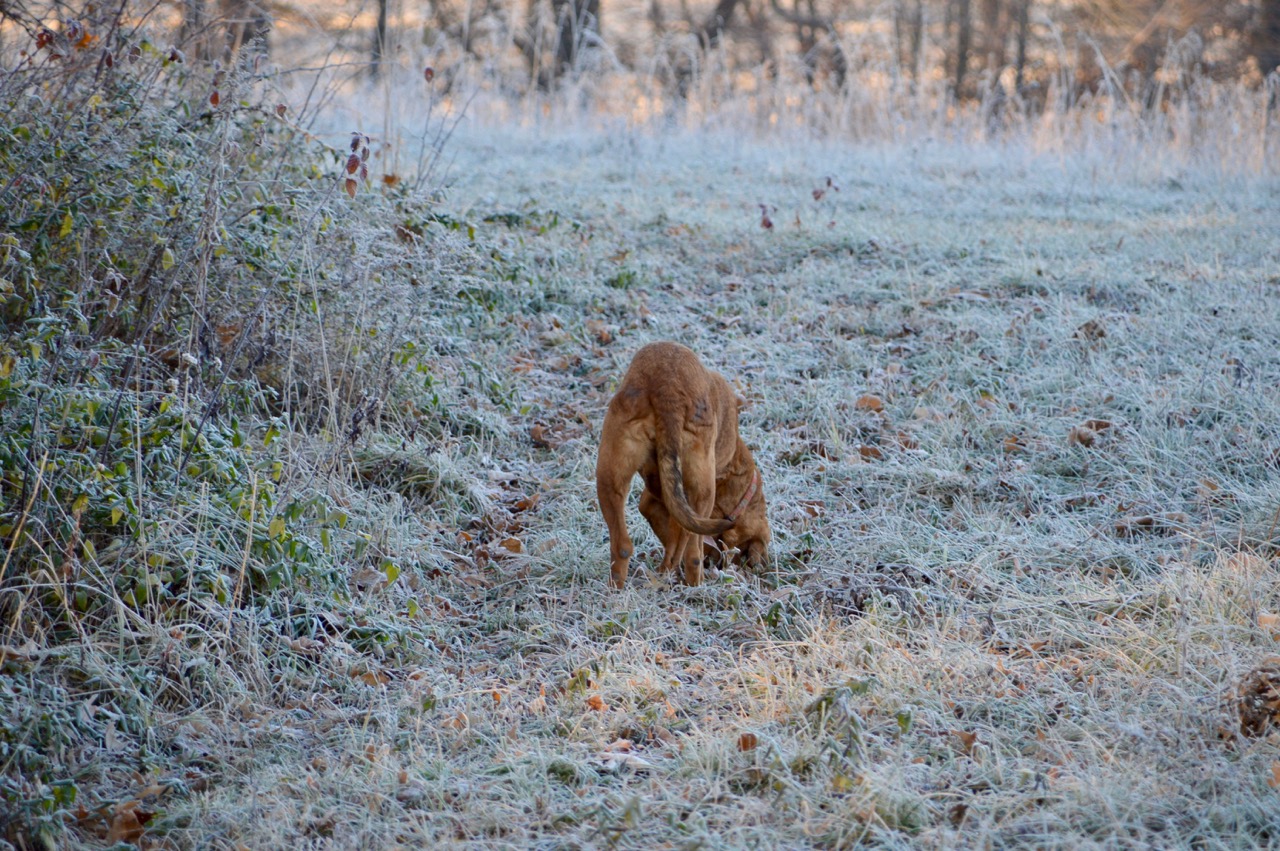 Sadie in the meantime is onto something more important and by the way she is acting it has to be near. I could hear her jowls making noise as I walked past her. Only once in 9 years has she ever snorted something inside her nose where a vet trip was required to get it out and some anti-biotics just in case. 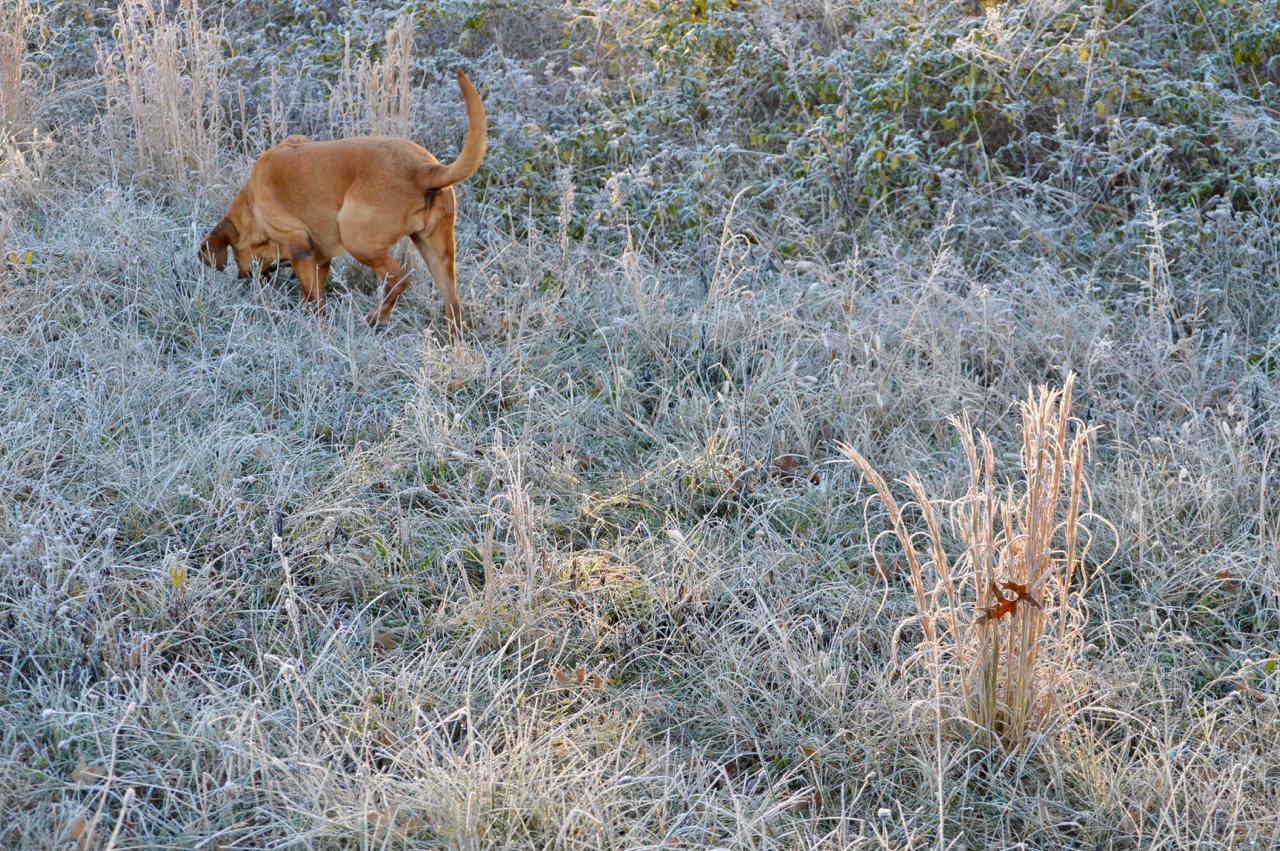 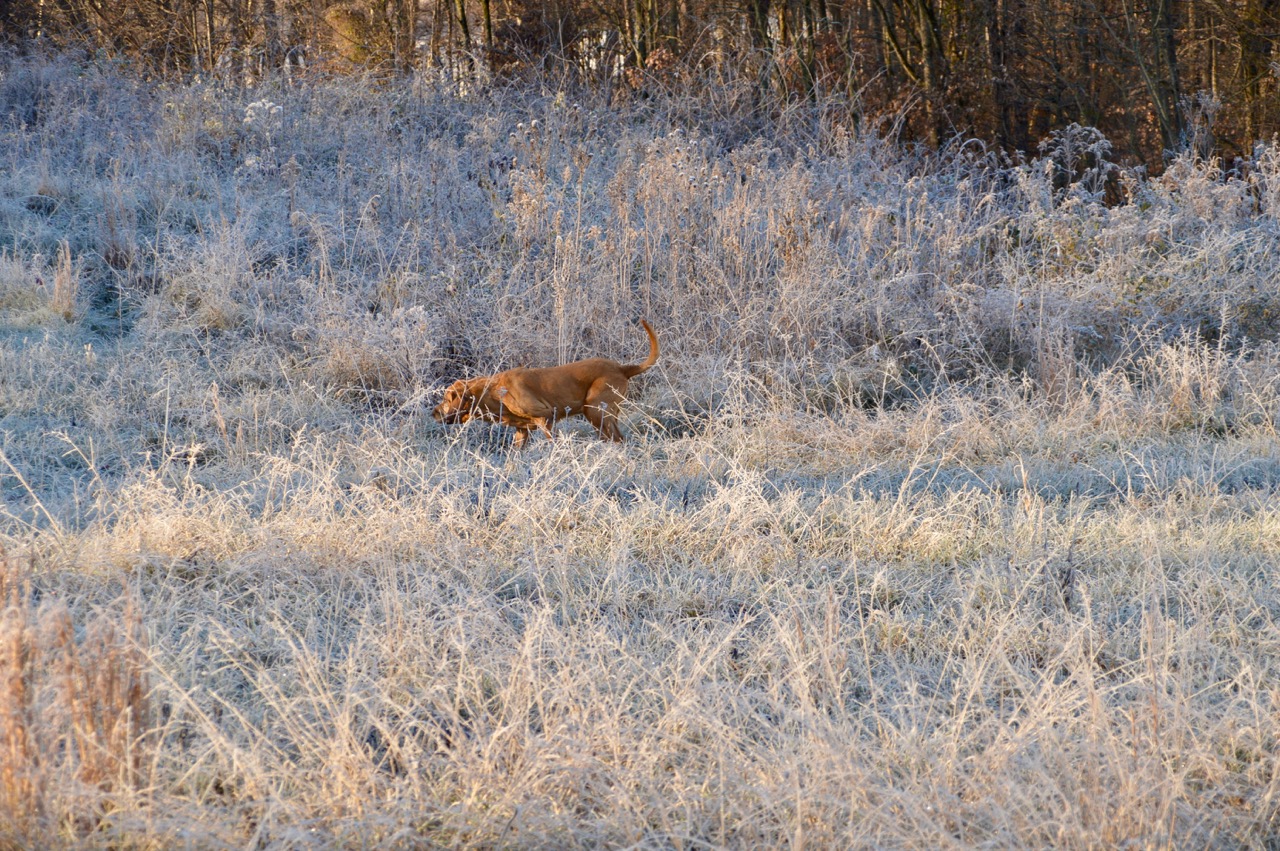 It was good to see that I'll be watching College Football tonight. I wasn't sure if I could wait for the big day on Saturday when all the questions about who will be in the playoffs will finally be answered. Of course the committee will keep fans like us hanging until Tuesday night before they release the teams. Or will they do that on Sunday since the season will be over? I can't remember. 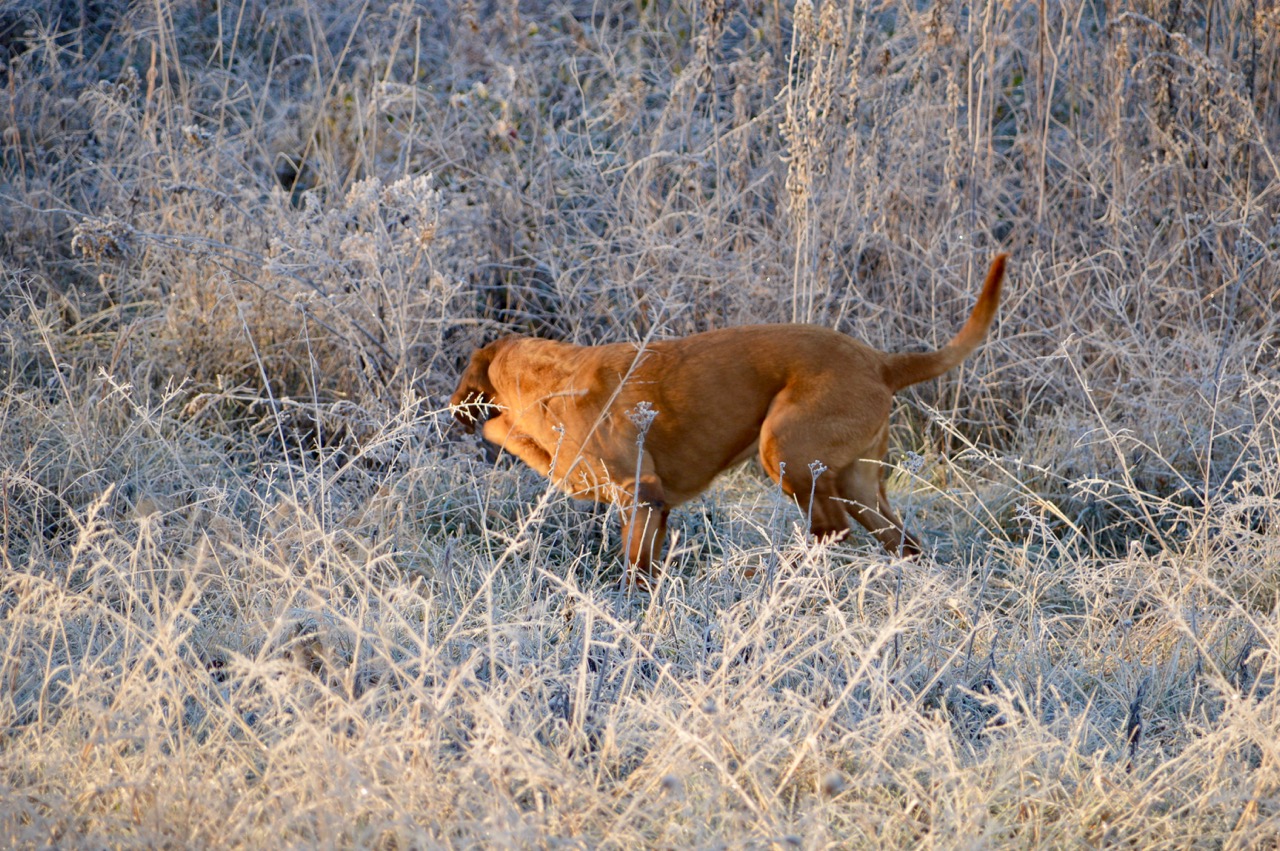 I pulled out my pdf file last night for Apple Numbers manual and figured out their complicated way of starting new charts and getting the correct data points. Microsoft's Excel is so much easier. Still, I figured it out, played by their rules and finished all the charts I need for my 2018 spreadsheets. 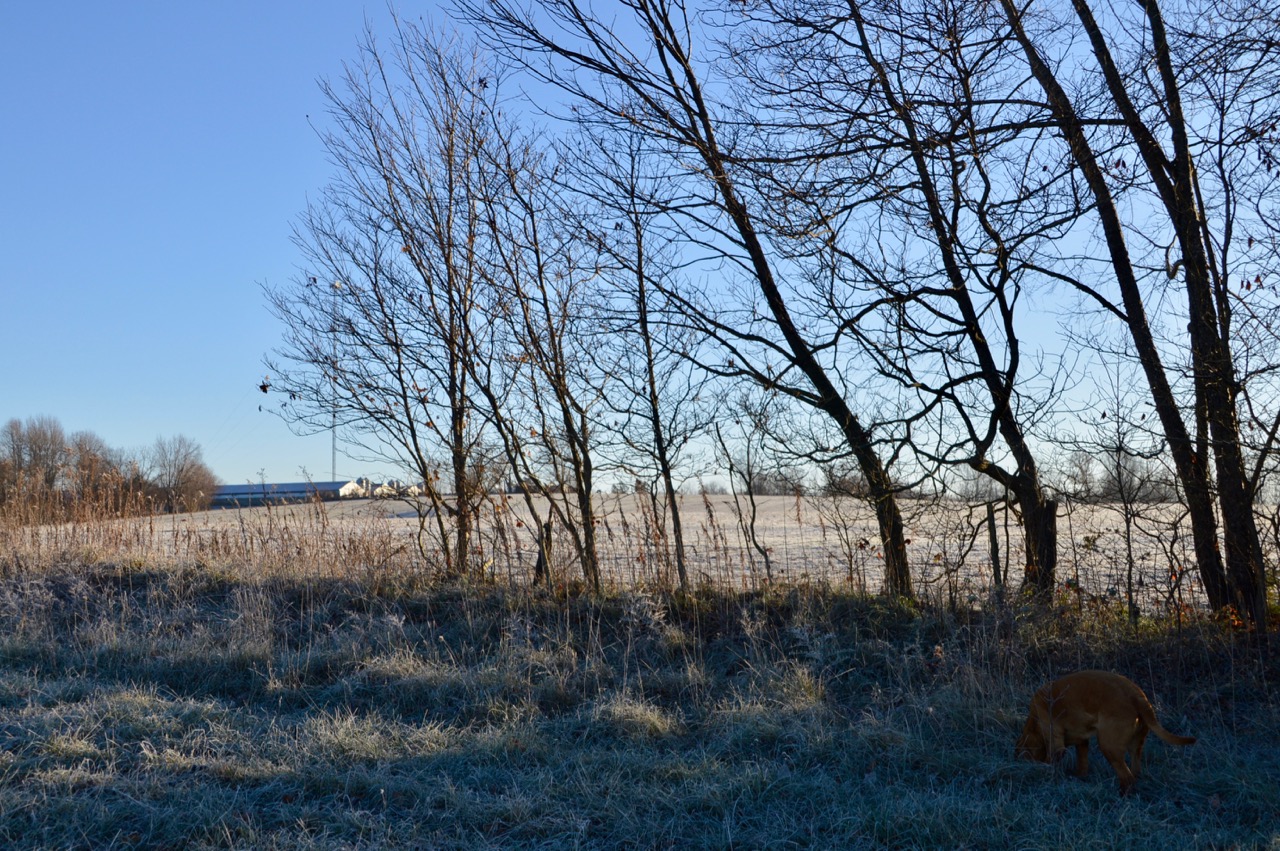 I didn't have to ask this morning but Sadie was more than curious where Stella was. She was sure she was headed in the right direction and even had her ears out wide to catch as much scent as possible. 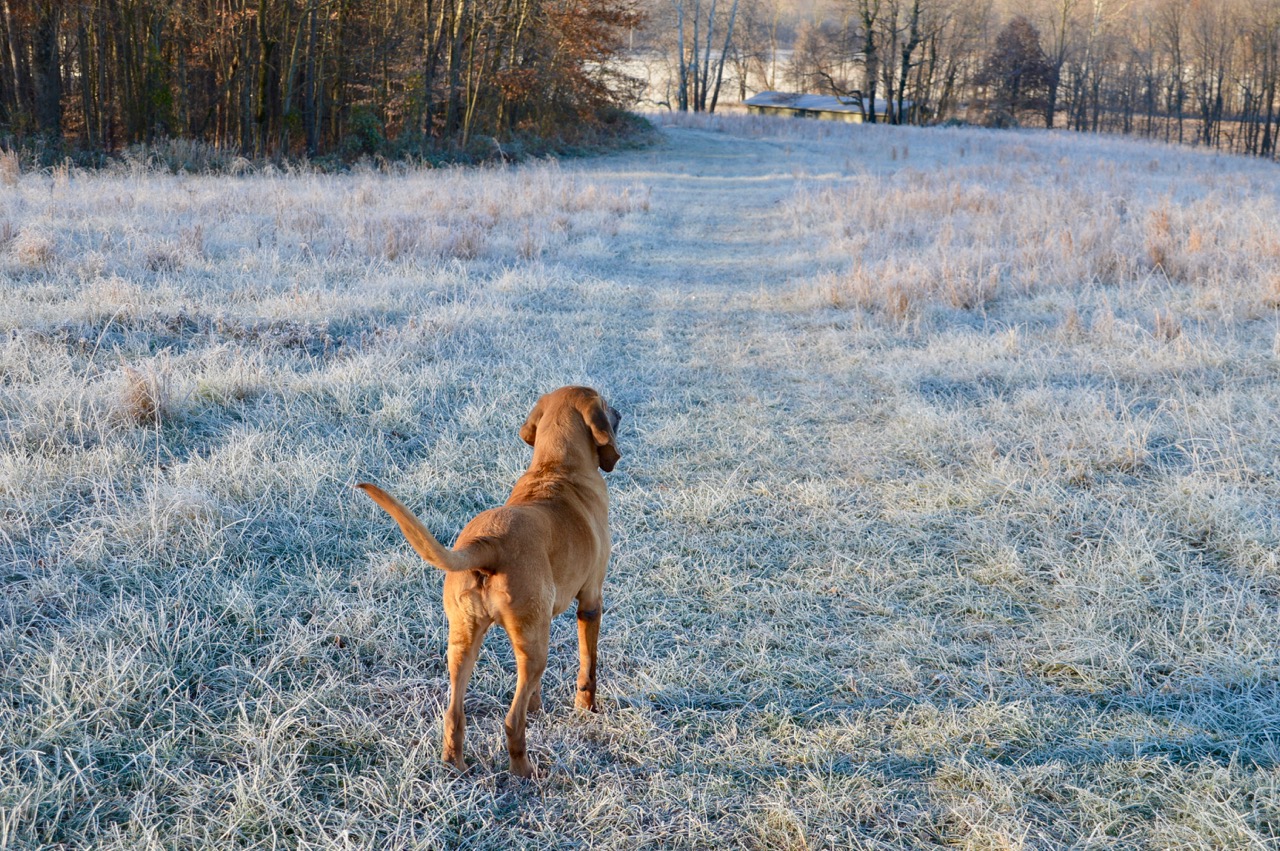 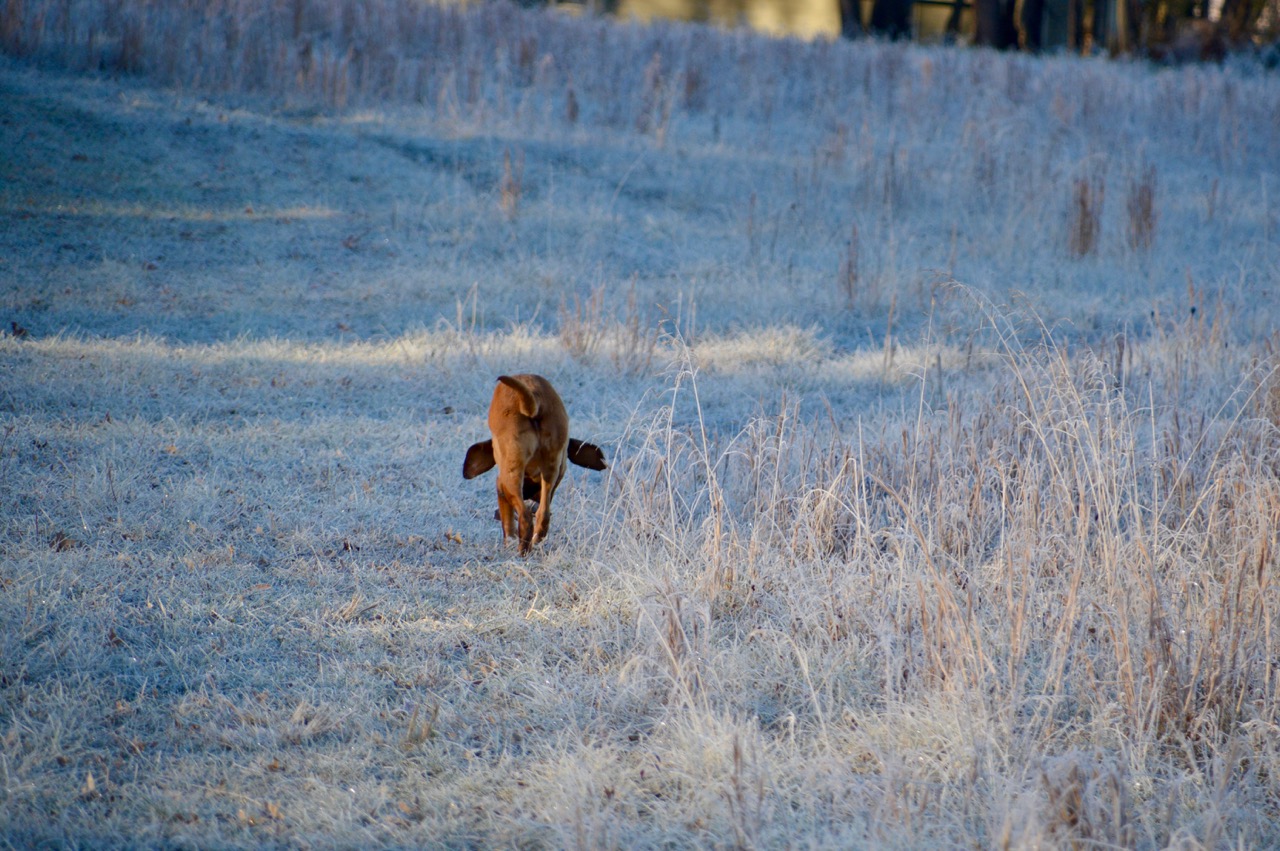 Looking through the white frosted field I didn't see signs of Stella anywhere. Had Sadie misjudged where she would be? I took a closer look from left to right and didn't see her anywhere. 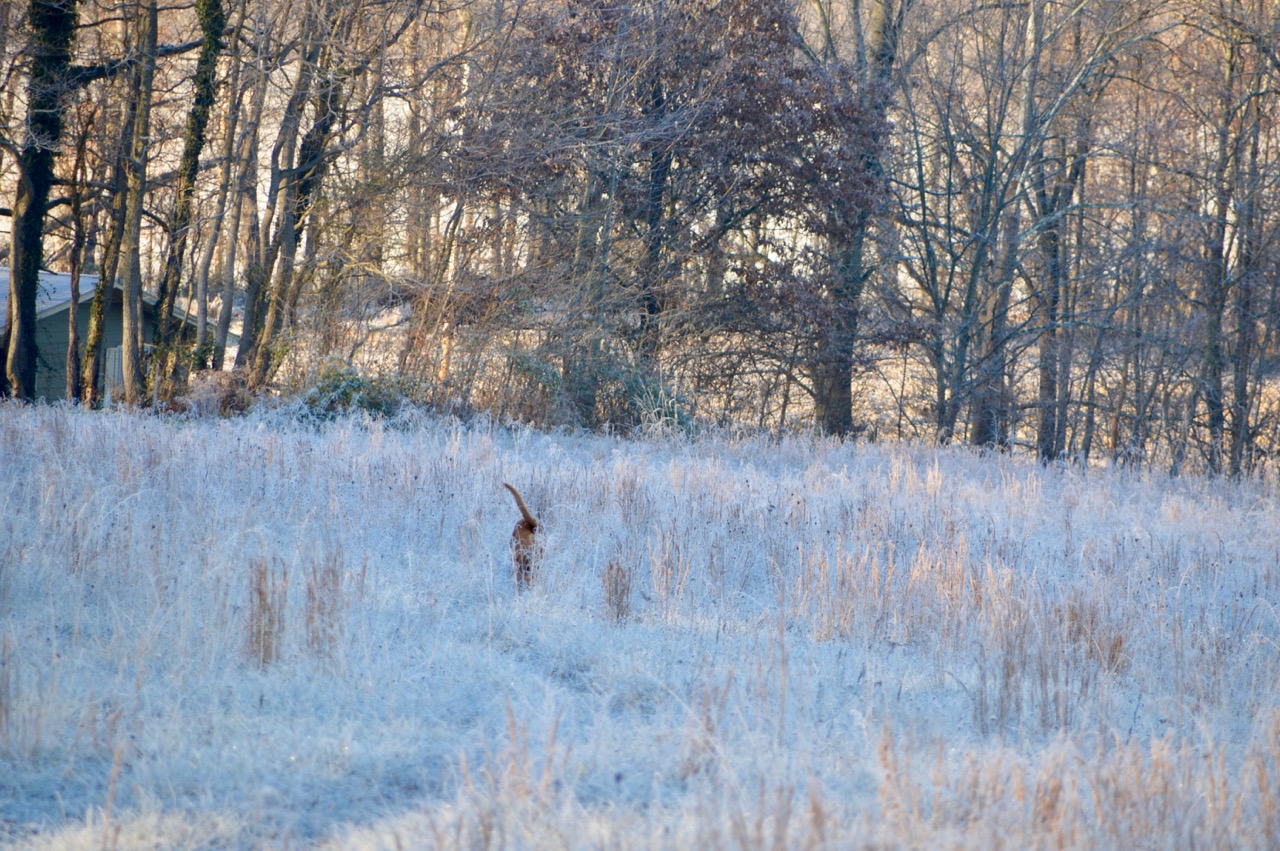 As I started that scan again from left to right using my camera this time ... there she was. She hadn't moved 10' and was to the far left of me and nowhere close to where Sadie was going. I had a feeling that Sadie had changed her focus from finding Stella to enjoying some frozen deer scat. Maybe to her it's like me eating M&M's with peanuts. I love those so I can understand how the bloodhounds love what they do, although it's a habit I wish they would get rid of. 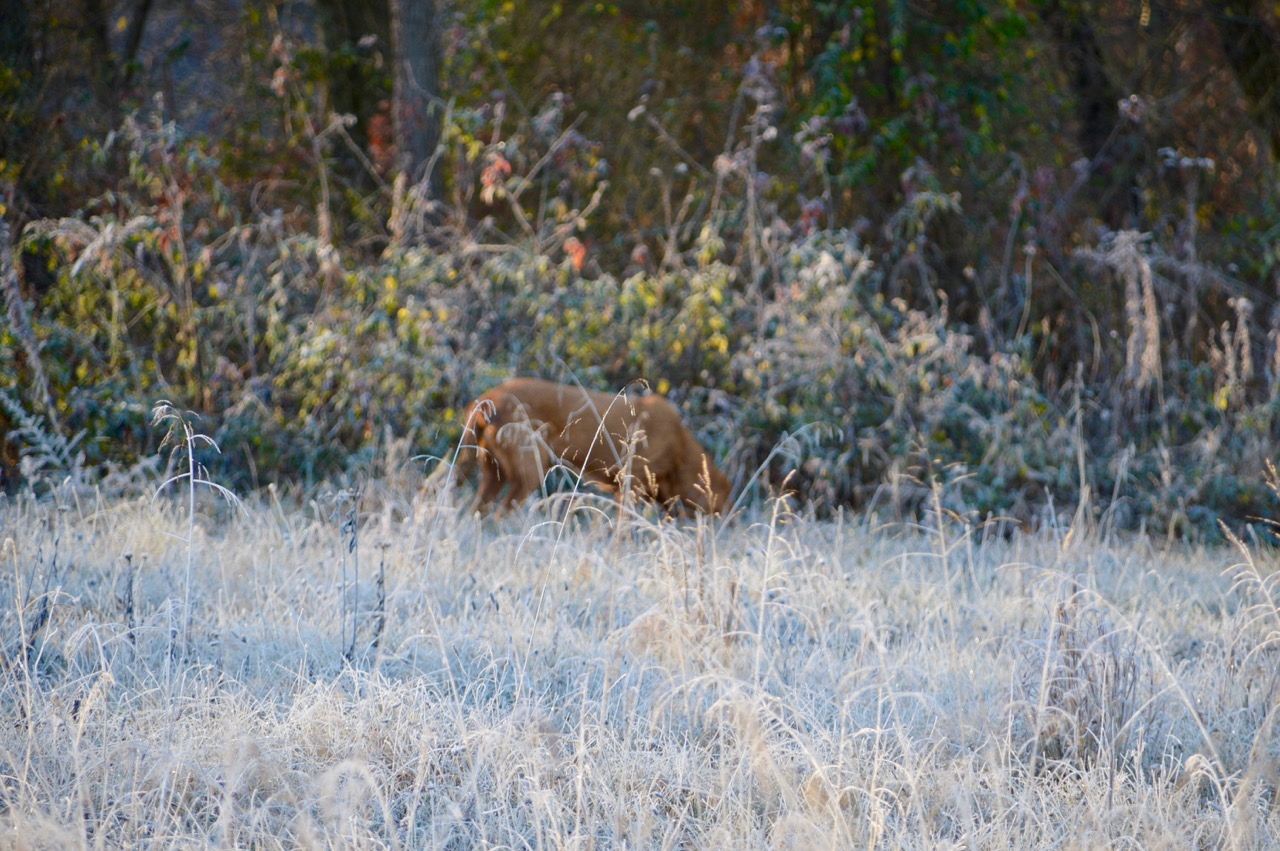 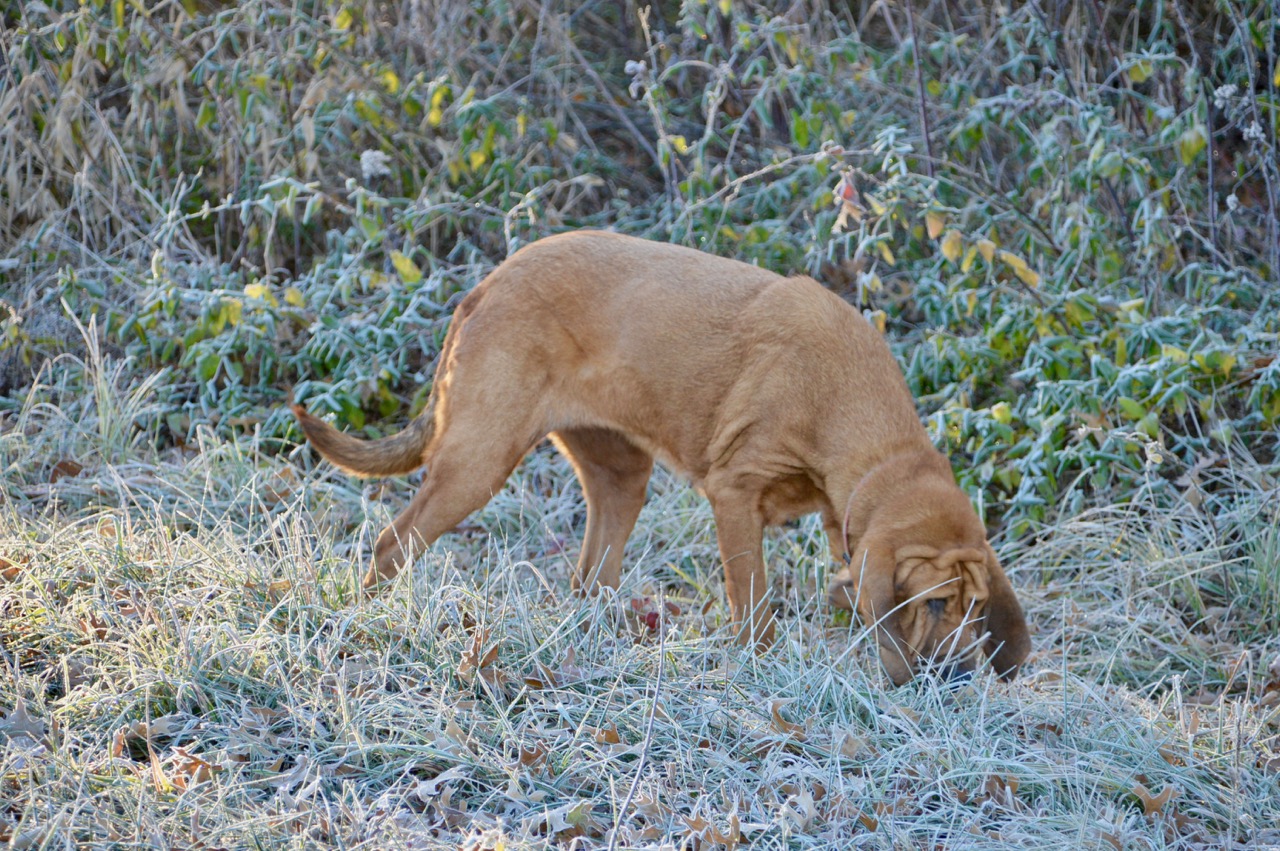 This picture accomplished what I wanted. I wanted the sun and that jet contrail to be the main focus. I think the blacked out trees makes everything look much different than the time of day it was taken. 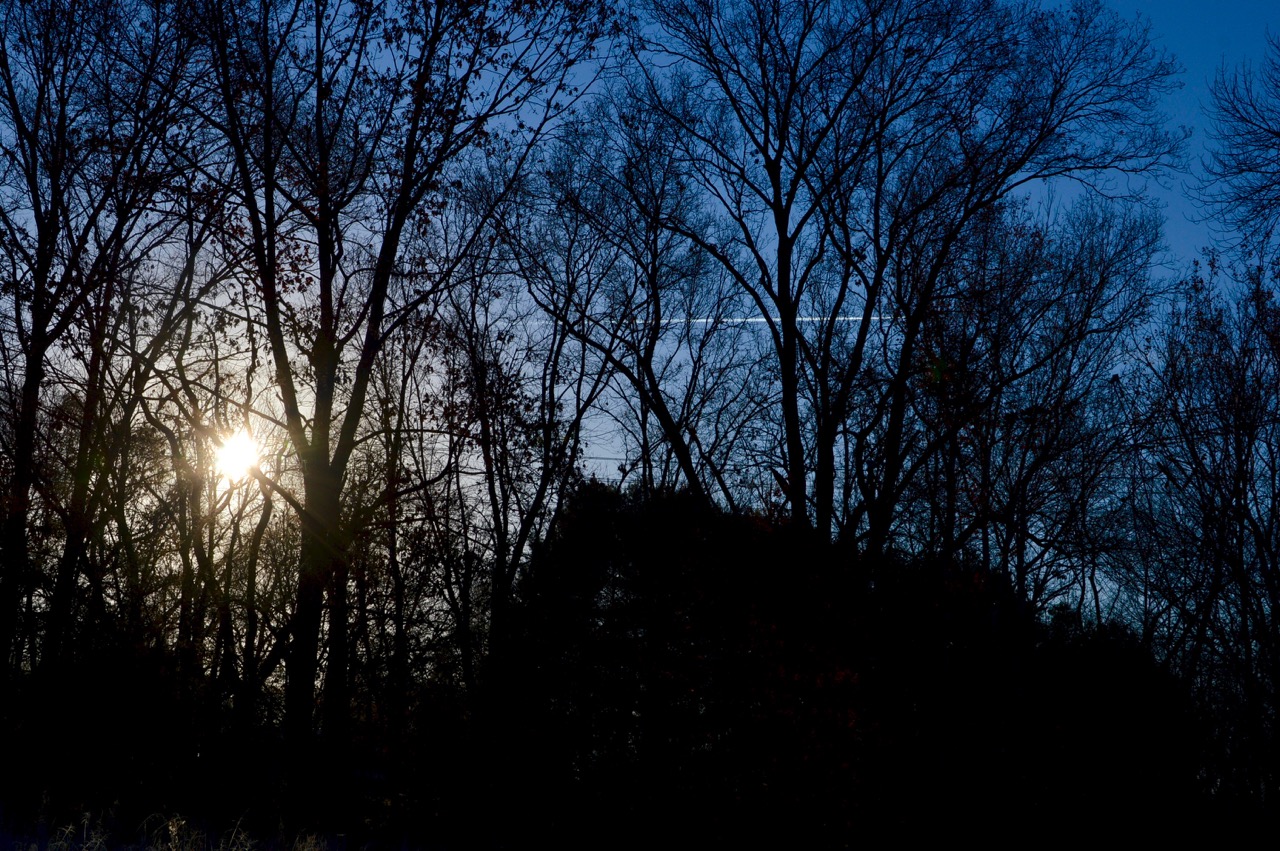 With my face freezing cold we finally made it back to the yard but they were not really finished with their inspection. I doubt that deer are this close to the trees but maybe a field cat, raccoon ... something has been in their yard while we slept. 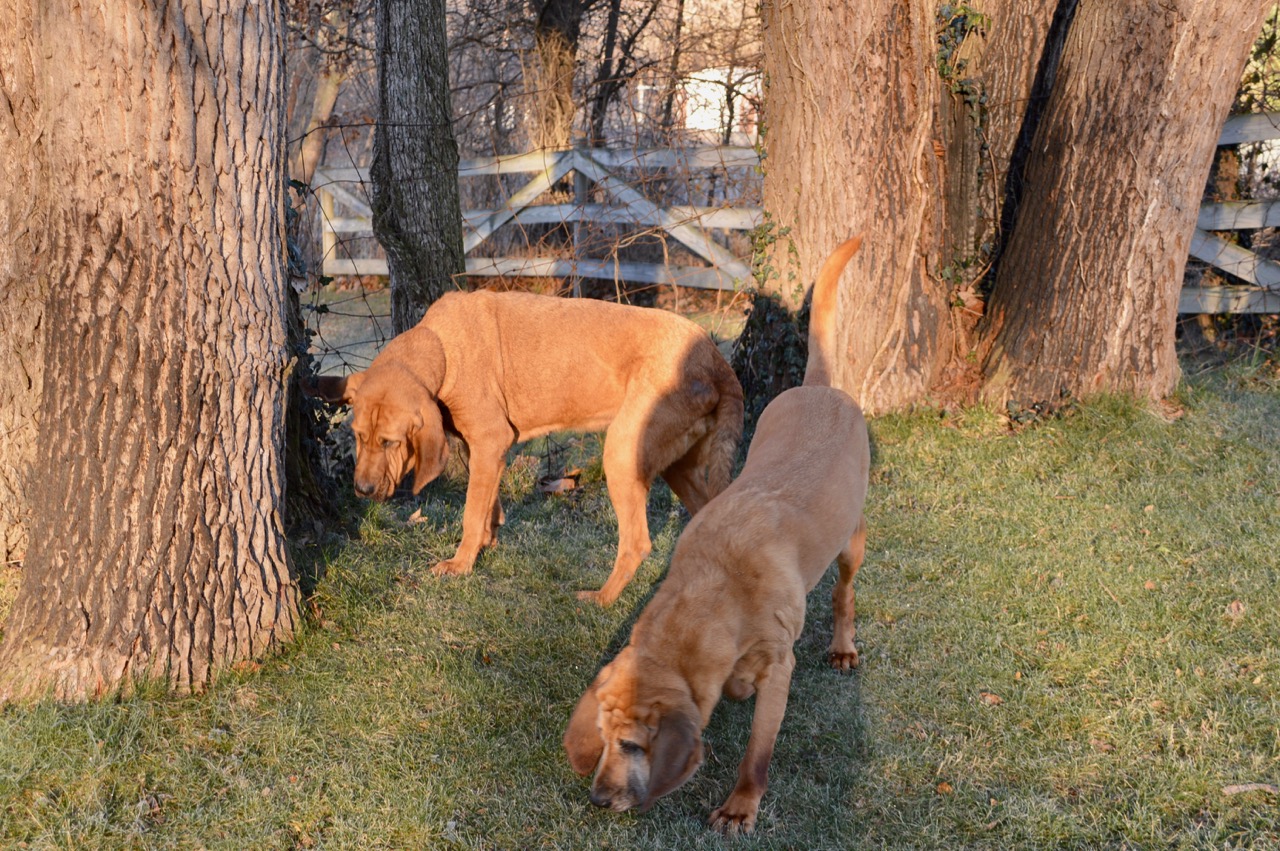 By the time lunch was finished, the temps were above 50° and it seemed like the perfect time to take our second walk of the day. Actually Sadie kept staring at me long enough that it was easier to go for a walk than me trying to explain to her that I was a little busy at the time.
By that time I had already gone out to replenish the food supply and add some fuel to the FJ. It was really interesting and nice to see that as I told the hounds "I am going grocery shopping" ... Stella got up from the floor where she was sleeping and walked to the bedroom knowing that she would be staying in there with Sadie while I was gone. 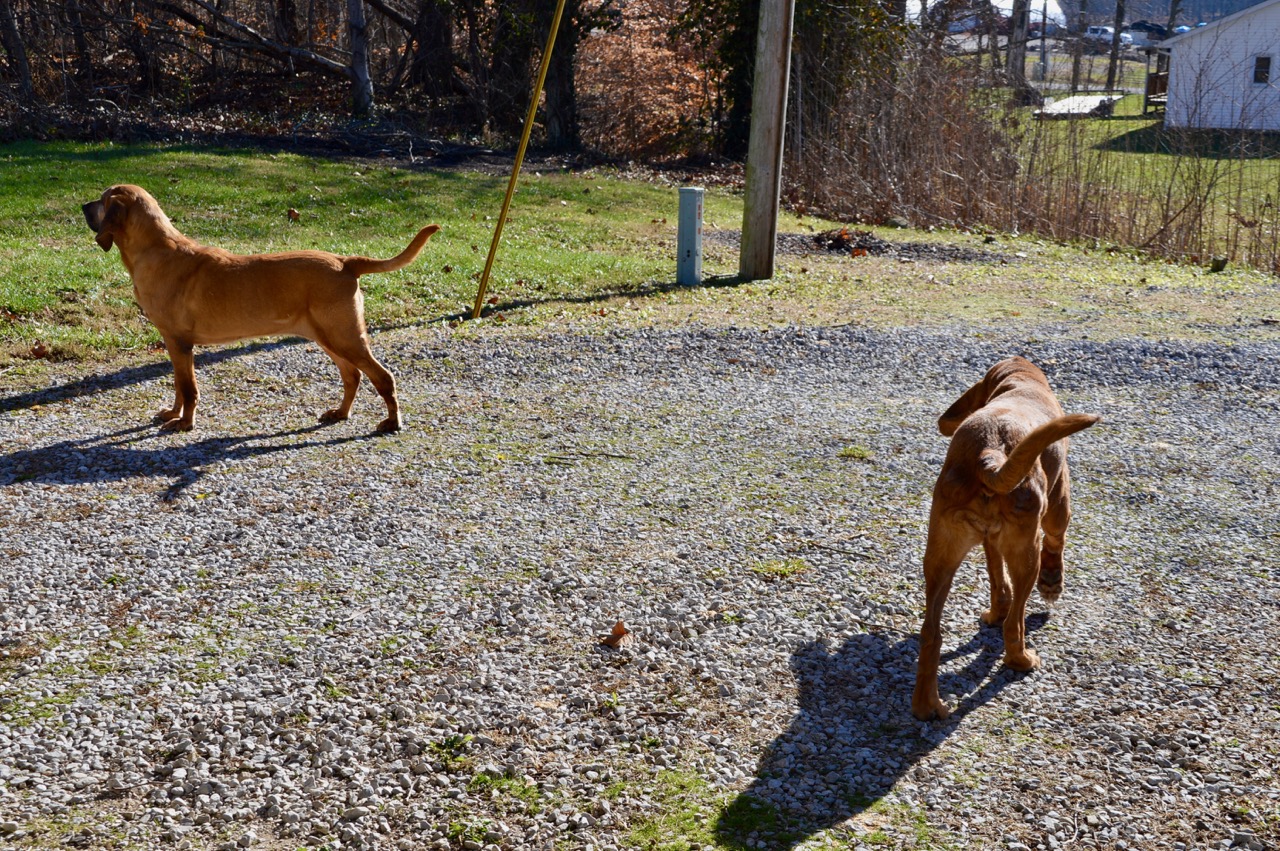 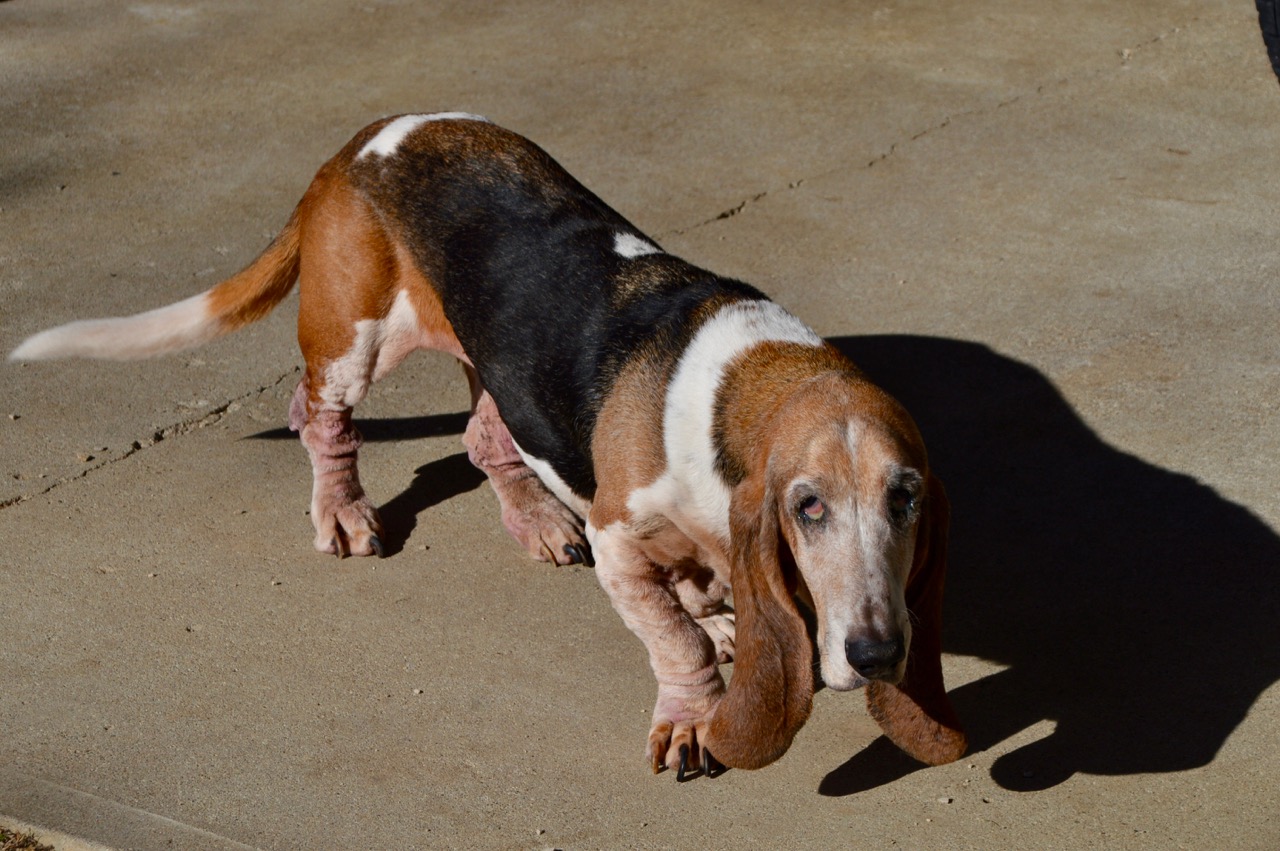 With all of the wild ragweed gone for the winter, that gives Sadie much more room to walk into he woods that is behind the burn pile. It's not bad if that is all the further she goes but her boundary is that ridge right behind her. 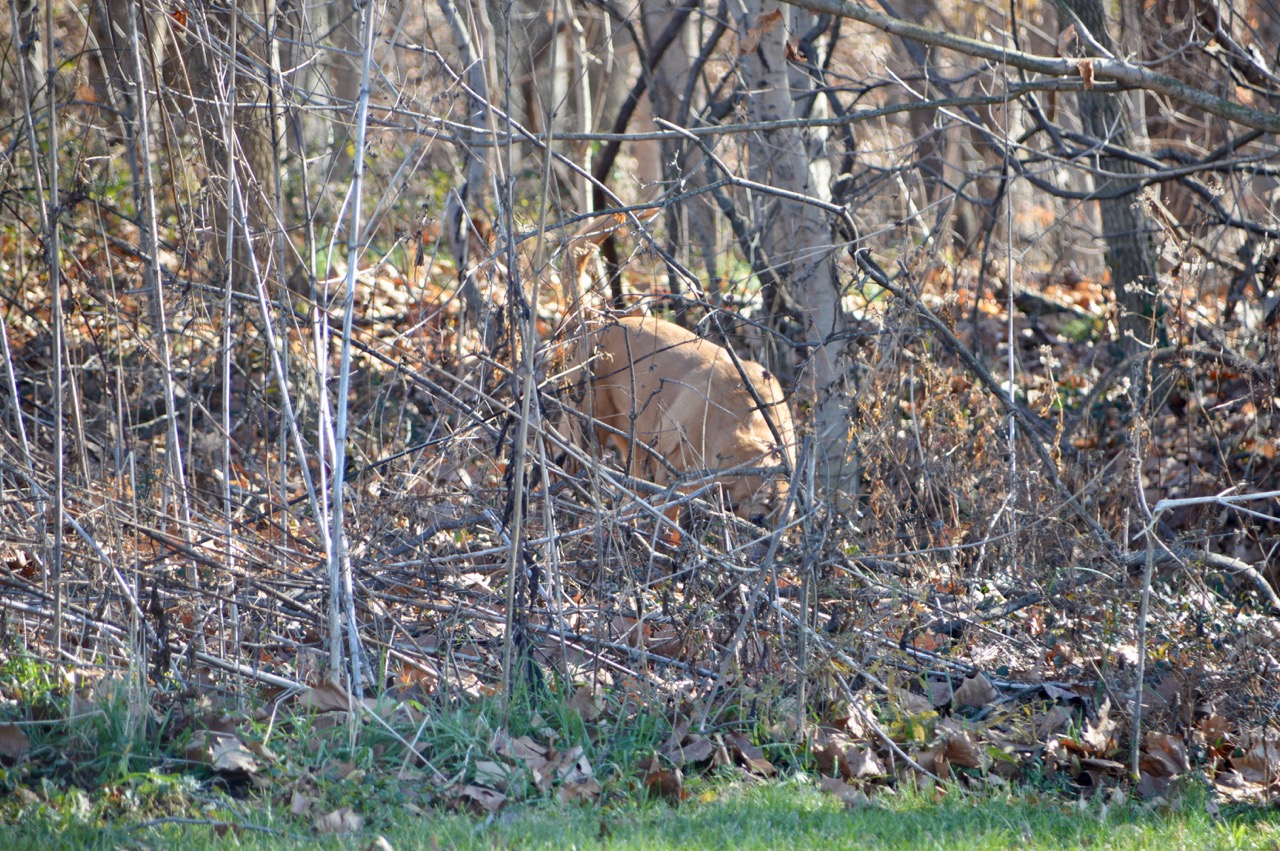 Once she saw I was headed to the field, she sprinted out of the woods, passed Stella and headed around the corner. 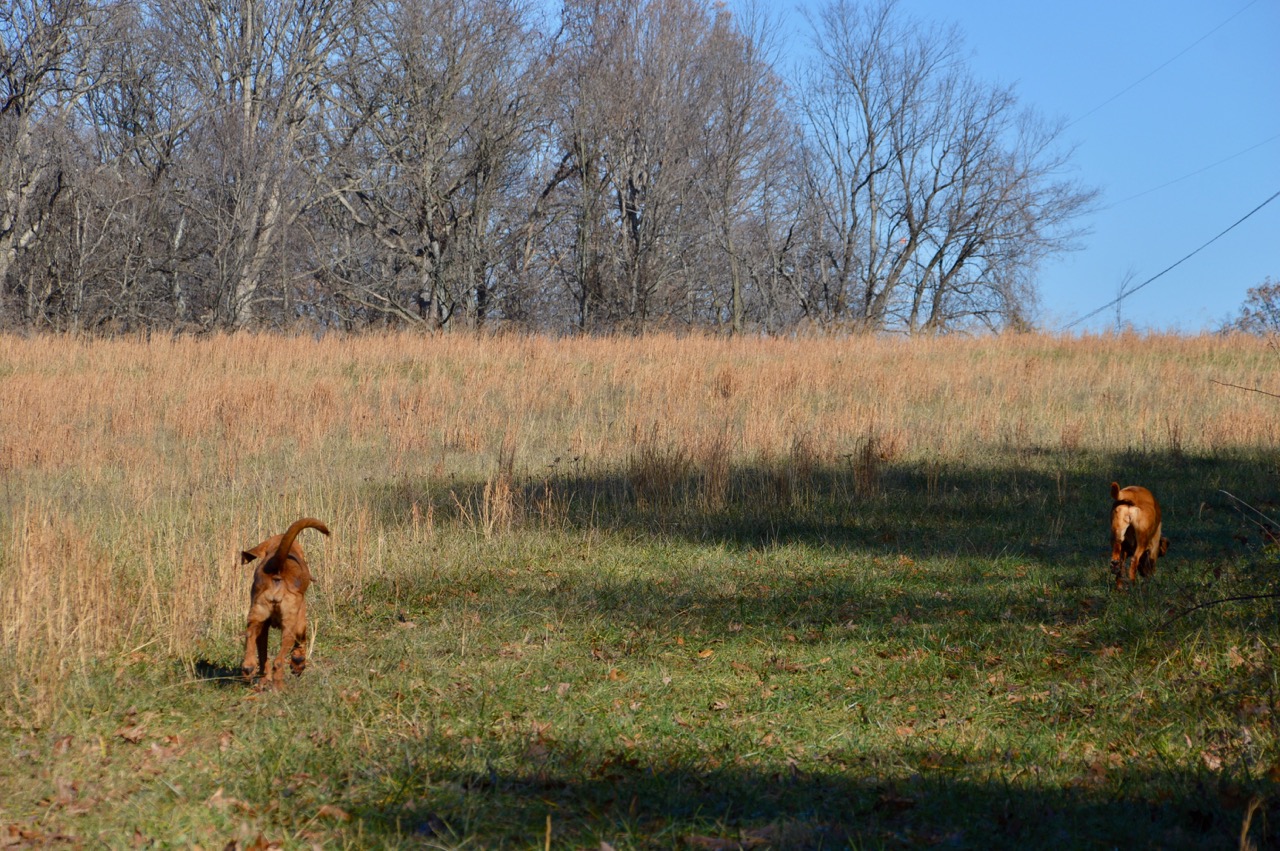 While I was looking into the woods to the right of me, then toward the sky, I didn't notice which hound had taken off to the middle of the field. When I saw a bird take off from ground level, I thought it was Sadie because she is my bird chaser. So for the longest time I thought it was Sadie and I was far enough away that I could not see a collar. 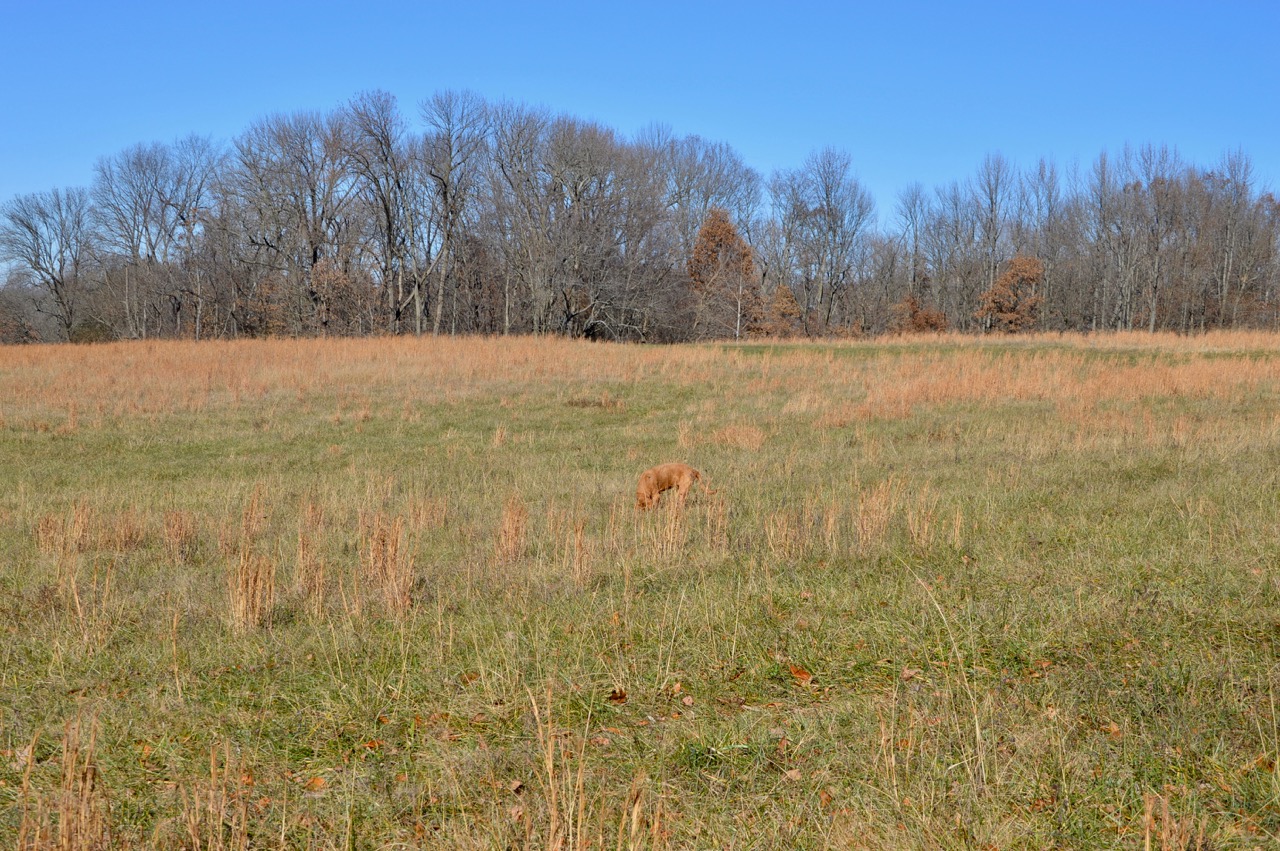 Not until she turned and started trotting toward the path did I realize it was Stella out in the middle of the field. 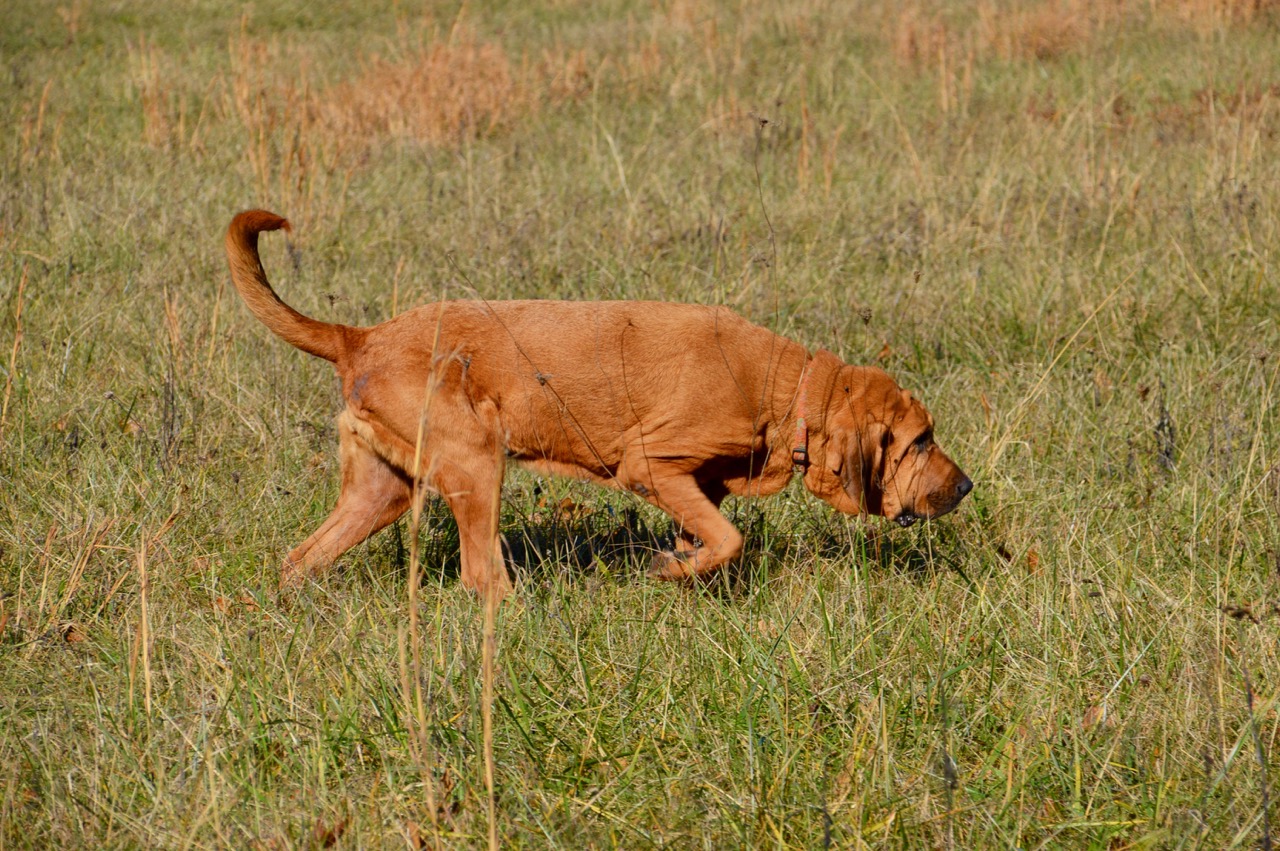 I could not believe the change in temperature since our walk earlier the morning, not 4 hours before. We were up over 50° and I could walk without a jacket on. 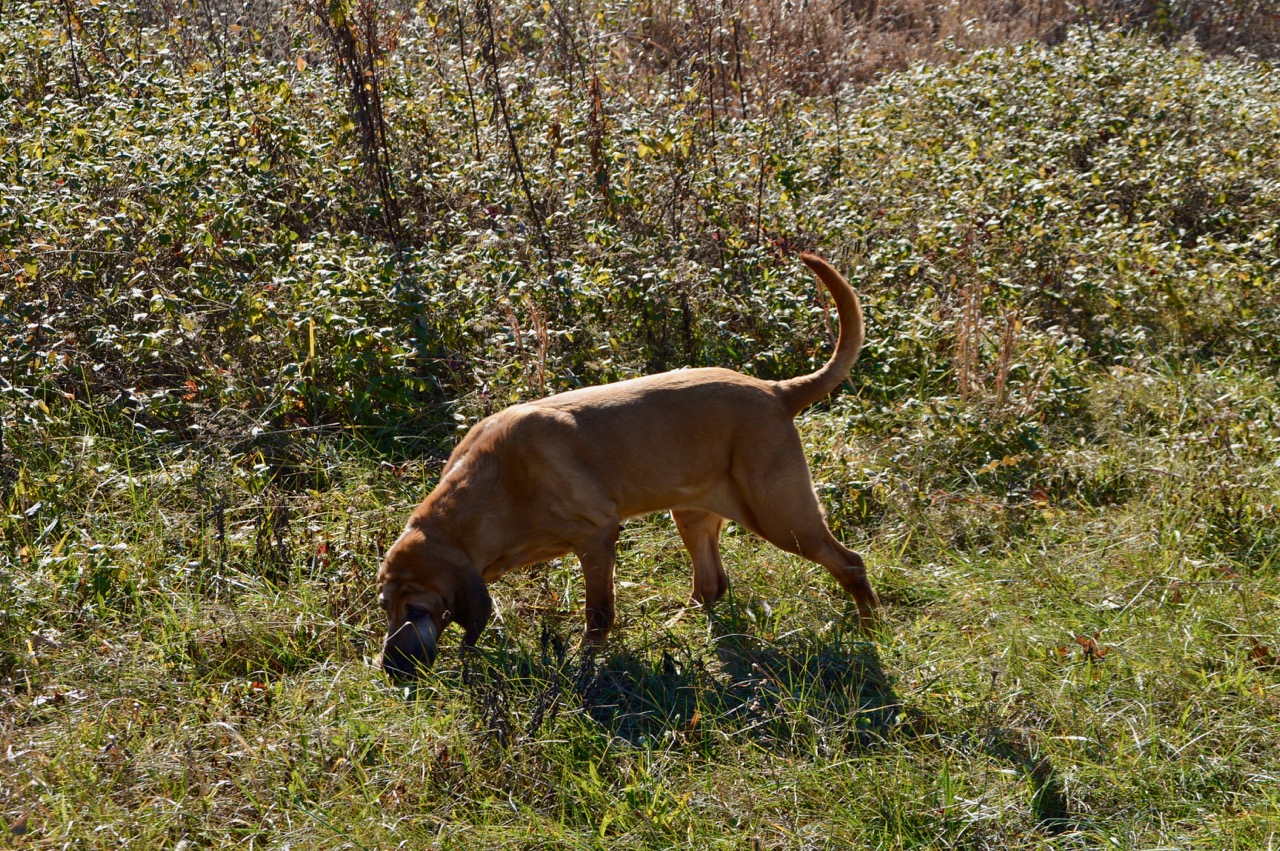 Here is living proof that Stella does walk the full walk in the afternoons. A different routine for different times of day. 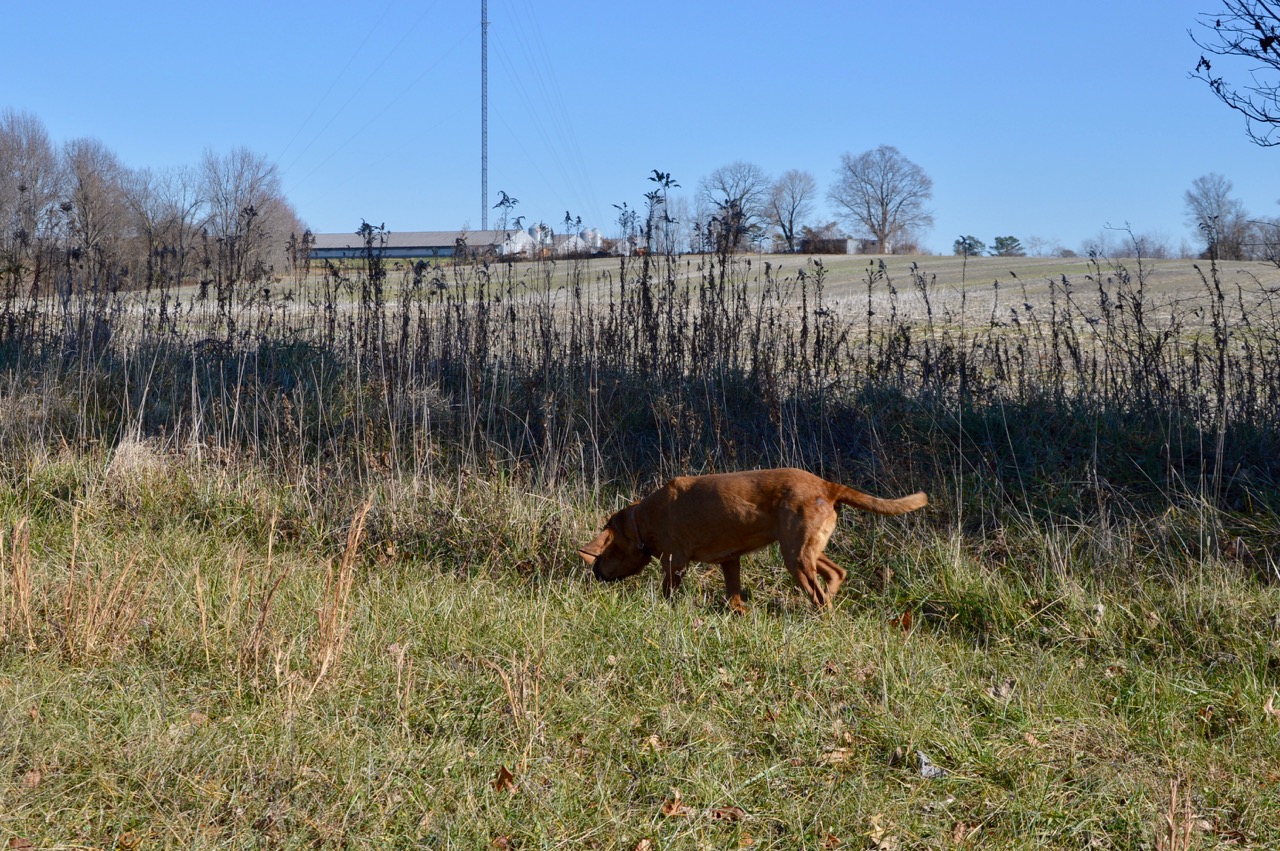 With Sadie, she will want to go back outside 5 minutes after she is inside but Stella always sleeps in the afternoon as she slowly migrates from the computer room floor, to her favorite spot by the kitchen island and then out to the couch for a night of football or basketball. 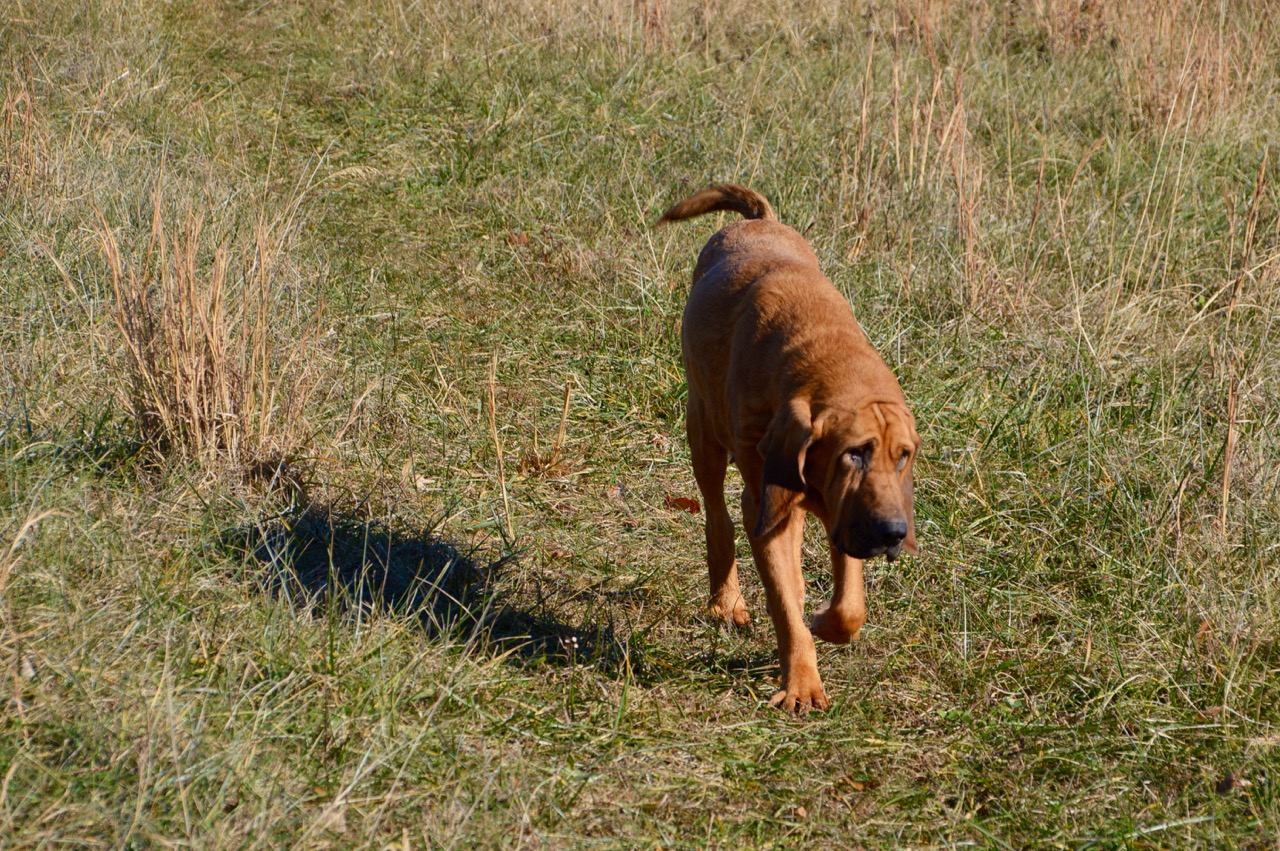 They were happy, I was happy with how nice the day had turned out. It was time to get back to the house. 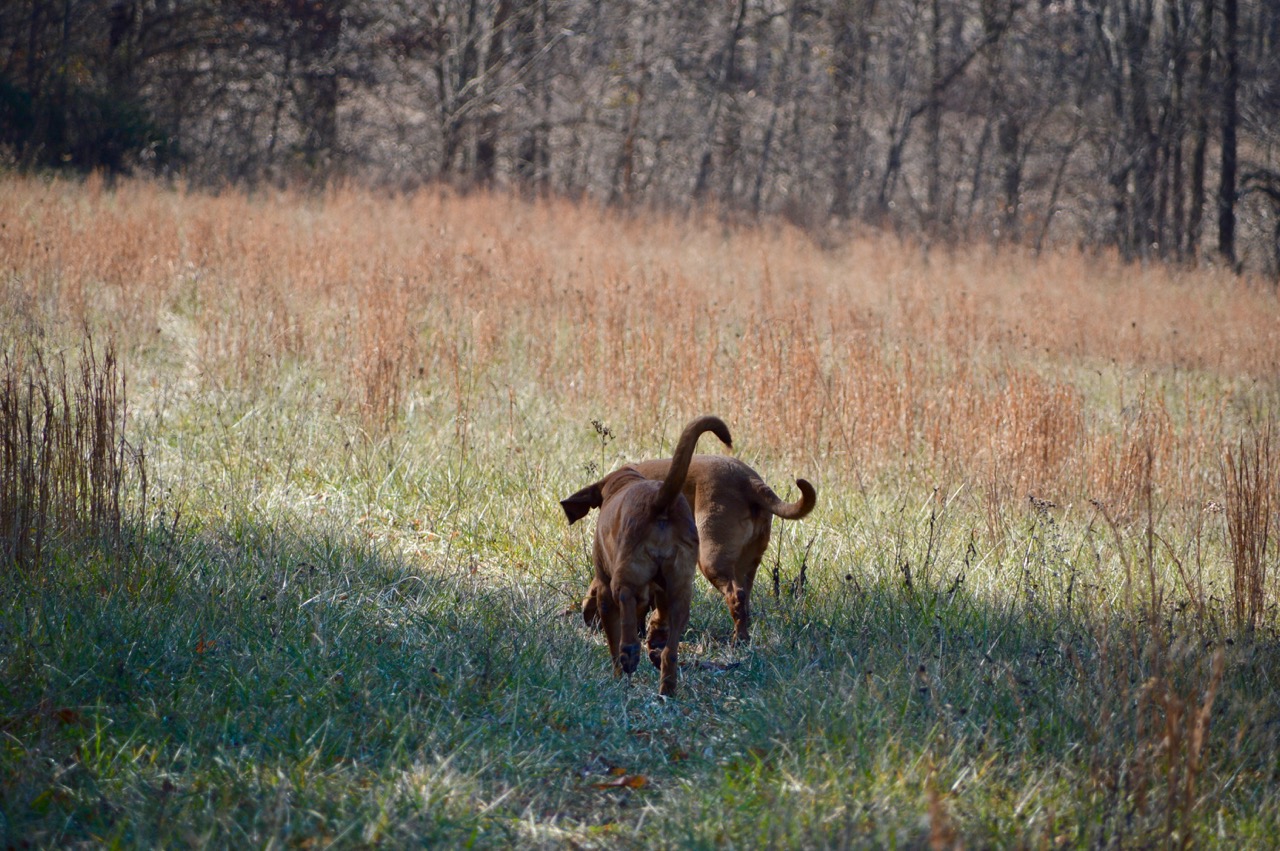 For some strange reason as I was about to put premium gas into the FJ today, I noticed on the gas pump the price had dropped over 20 cents per gallon since the last time I bought it. Some people think I am crazy for putting premium gas in that type of vehicle but I like following what the owners manual says. The design engineers know more than I do about stuff like that.

Stella can smell food (yogurt) a mile away, as she stands right beside my computer desk chair to see if I happen to drop any or if I give her a spoon full of it. She will have to wait until the container is gone before she gets any of it. Her and Sadie always get the last of the container of yogurt and cottage cheese.

Heidi also can wake up from a deep sleep if there is some sort of food she is interested in. She is a little more particular in what she will get up for, than the bloodhounds.

Today has been very nice and a great way to start the month of December in 'the tropics' of Southern Indiana.
at December 01, 2017