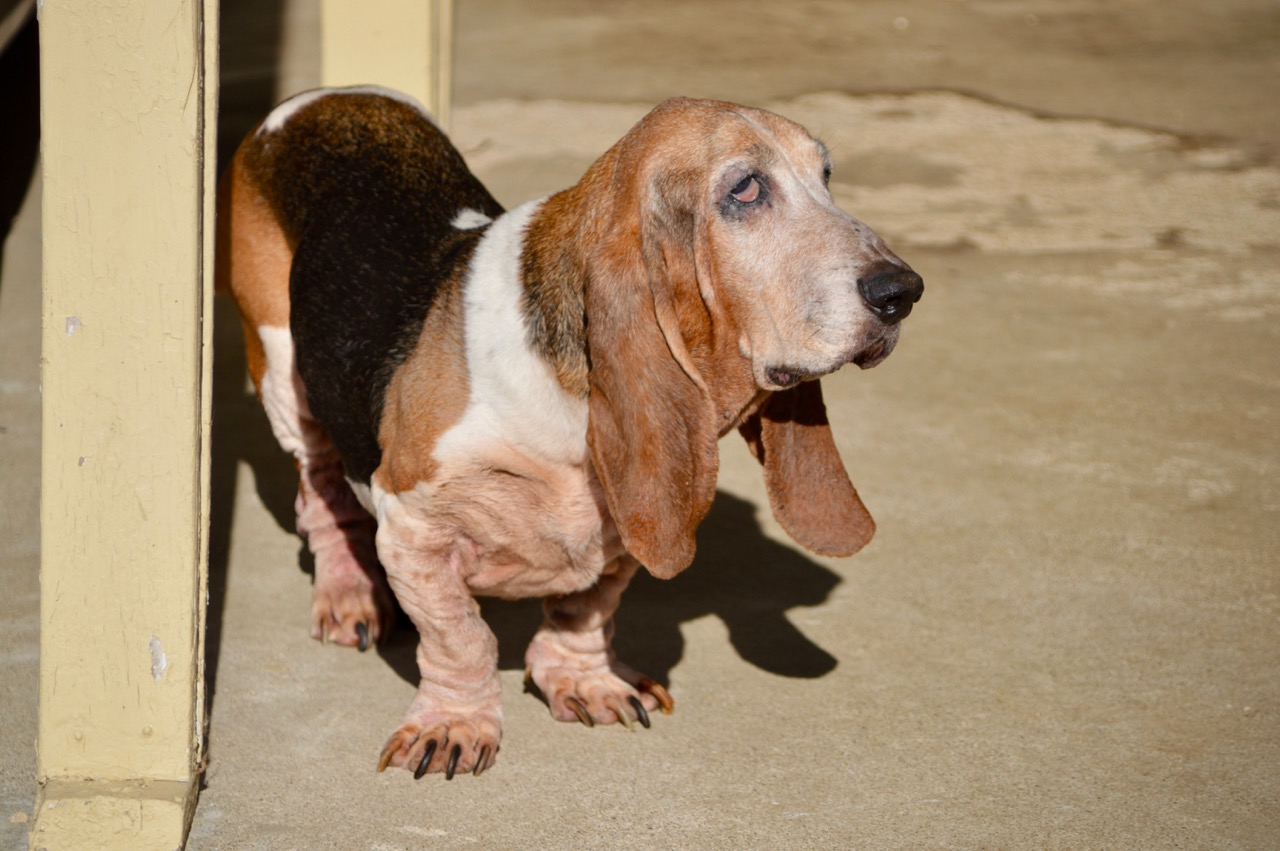 After weeks of hiding inside, only coming outside long enough to relieve herself ... yesterday the weather was so nice that Heidi came outside and stayed outside. She enjoyed herself. She doesn't know it yet but as soon as this post is published she is headed to the bath tub for a warm bath and a manicure afterward. 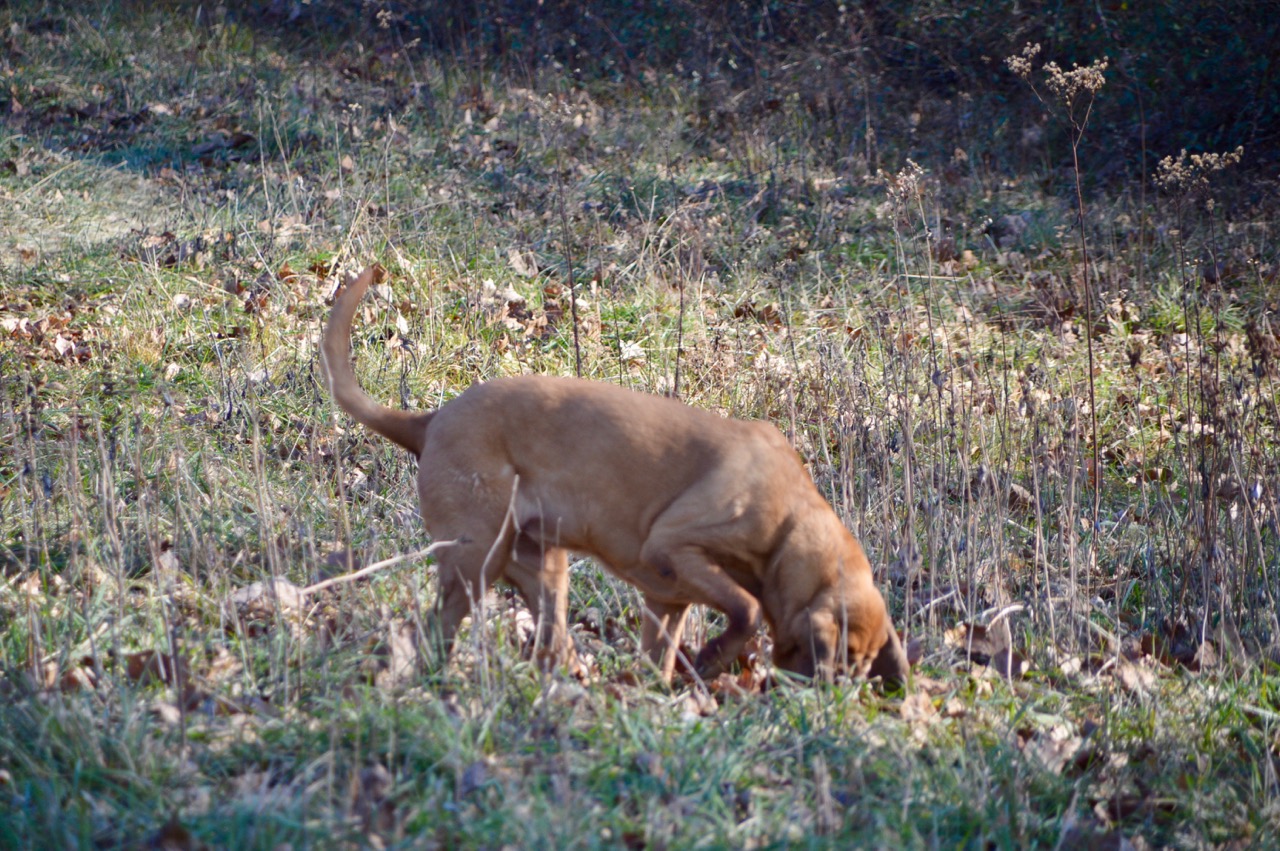 While I walked around picking up those small tree limbs in the yard, all three hounds roamed and explored on their own. Of course Stella had to test me and disappear. I stopped my tree limb expedition and changed it to a 'hunting' expedition. She can sneak away so fast. 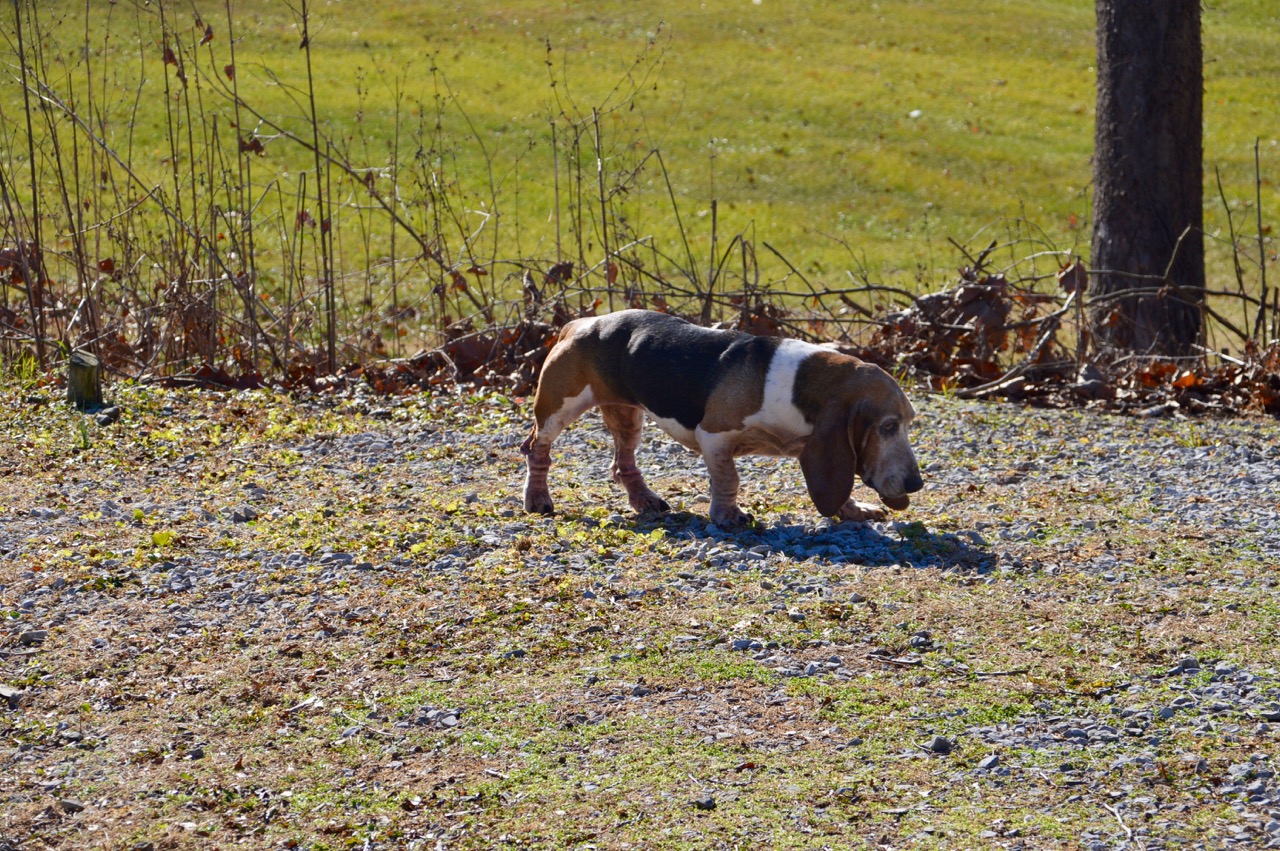 Heidi did a lap around the house slowly, then inspected the outside border of the backyard and driveway. It was so warm that I think we could have stayed outside all afternoon yesterday. I thought it was unbelievable weather but I remembered yesterday when I took a picture of Winston on Christmas Day in 2015 and it was just as warm. 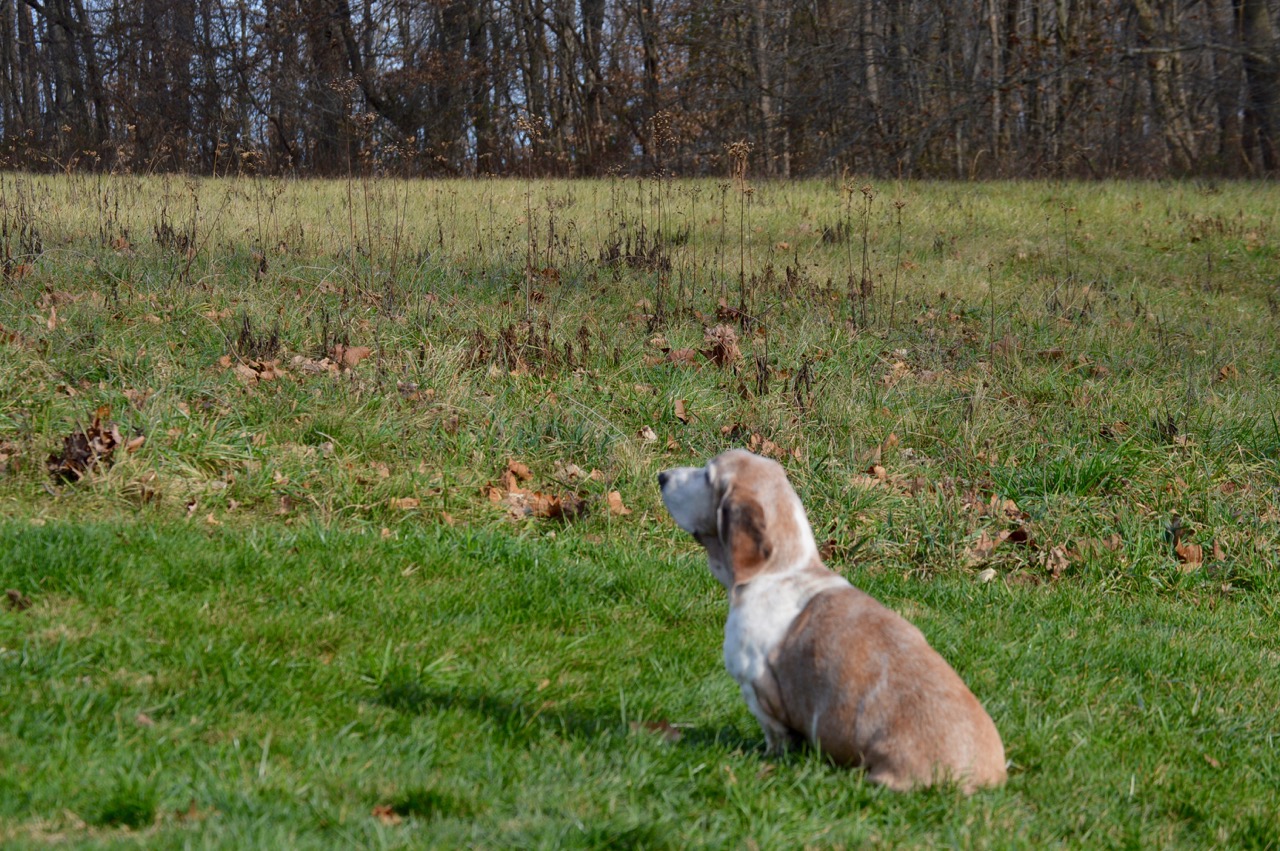 Here is a picture from that day. He had hurt his back 6 days before and could no longer walk. Even after two years I still miss that basset hound, he was the greatest. Yet by midnight tonight there is suppose to be snow showers until 6am, so we will be seeing colder weather. 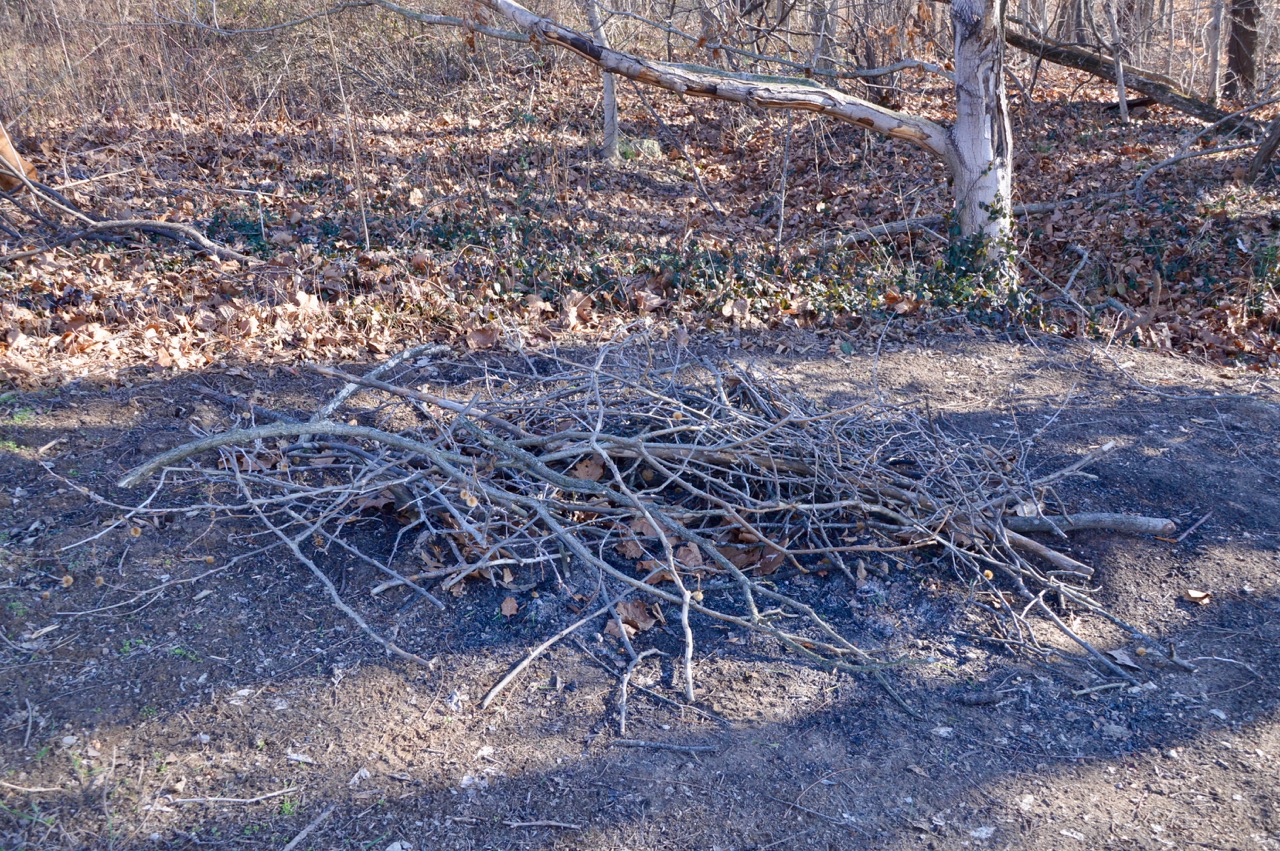 I didn't pick up all of those limbs but almost filled my 32gl trash can to add them to the small pile. It doesn't look like it now but by next spring I'll have a good size pile to burn. 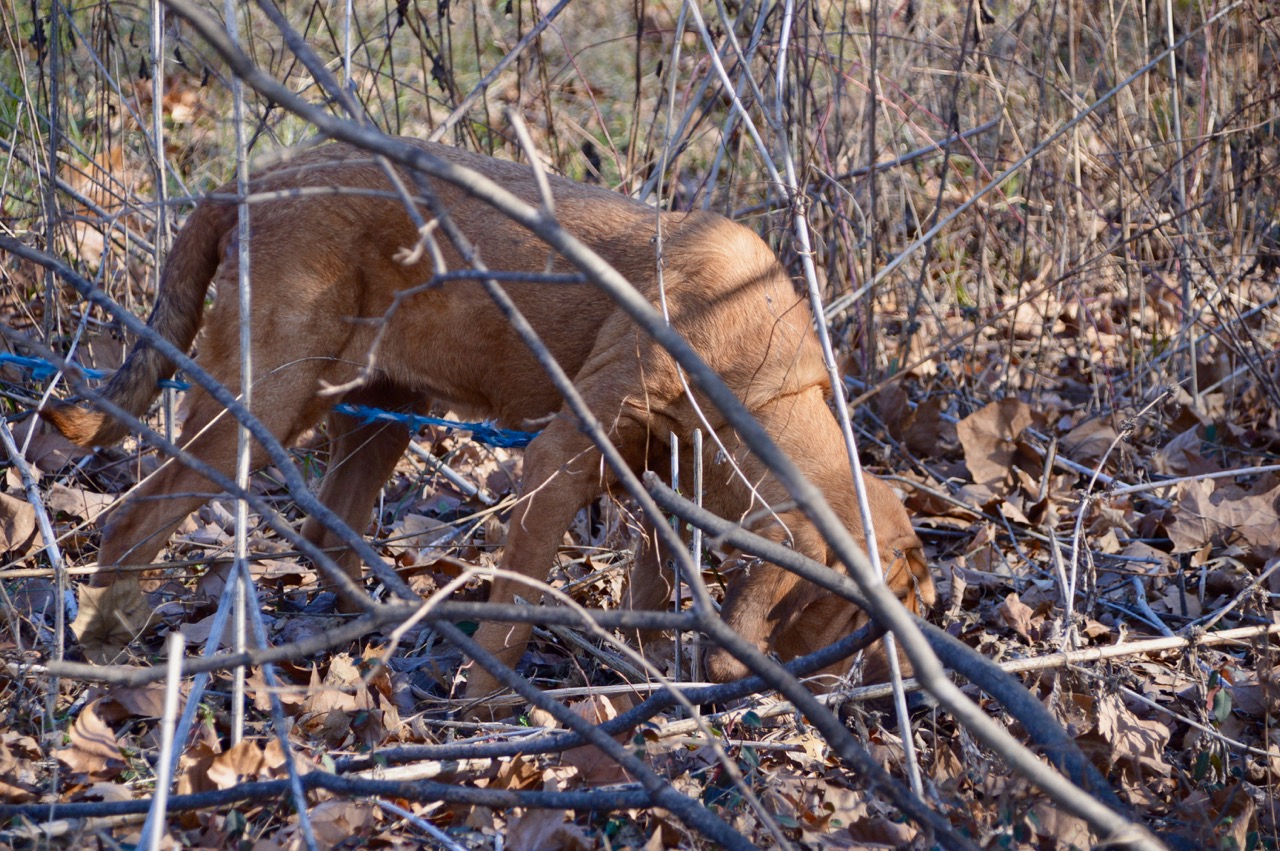 After I rounded up Stella as she walked out of the woods in back of the house, I had no choice but to put her on the 80' tether that is anchored in the field. It keeps her in the area within my view but gives her enough room to room. As you can see she had no problem walking into the brush and dead ragweed just behind the burn pile, getting tangled up. 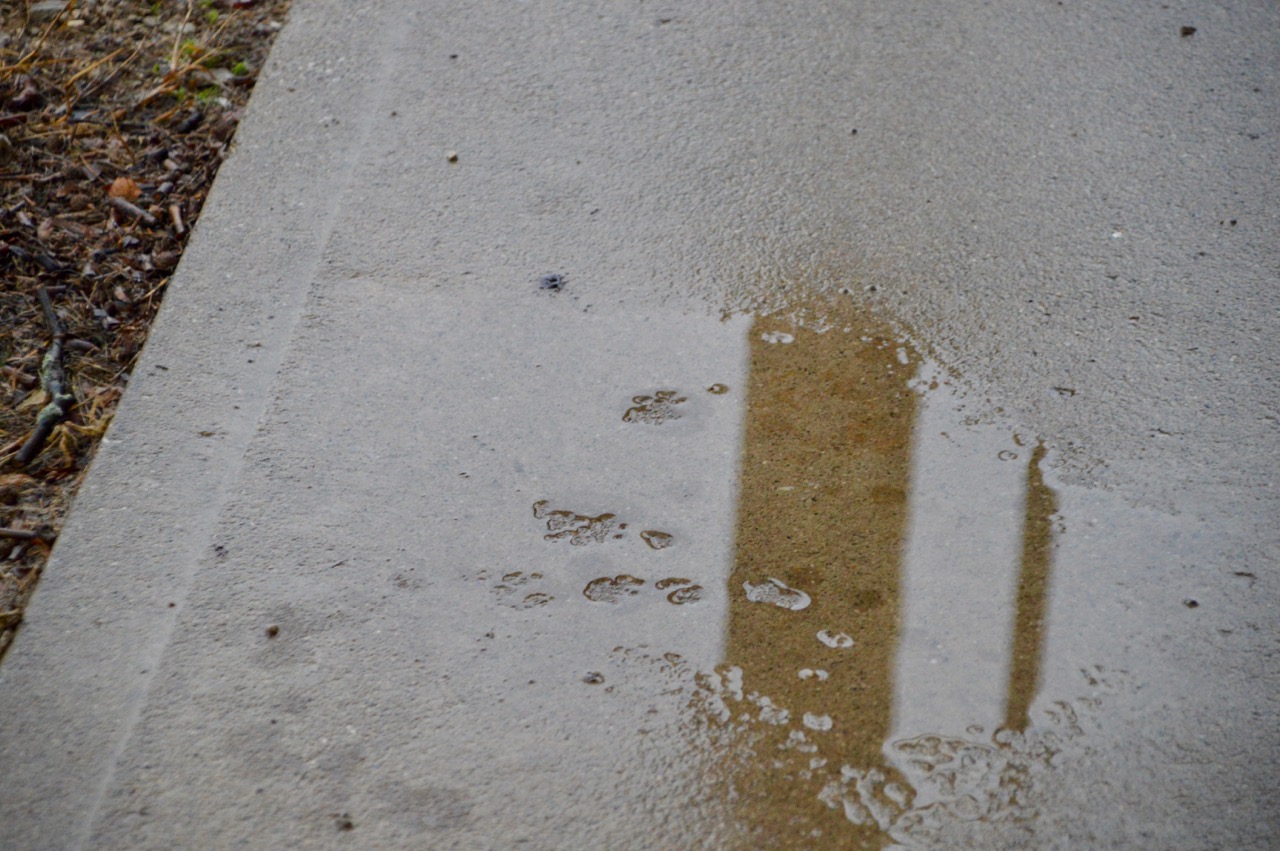 I never heard a thing last night during some solid sleep but there was evidence this morning it had rained pretty hard last night. It was very warm this morning as we headed out on our walk. I can always tell if it's raining lightly before we go out by looking at the passing cars from inside to see if they have their windshield wipers on. This morning it was safe enough to try a walk through the wet field. 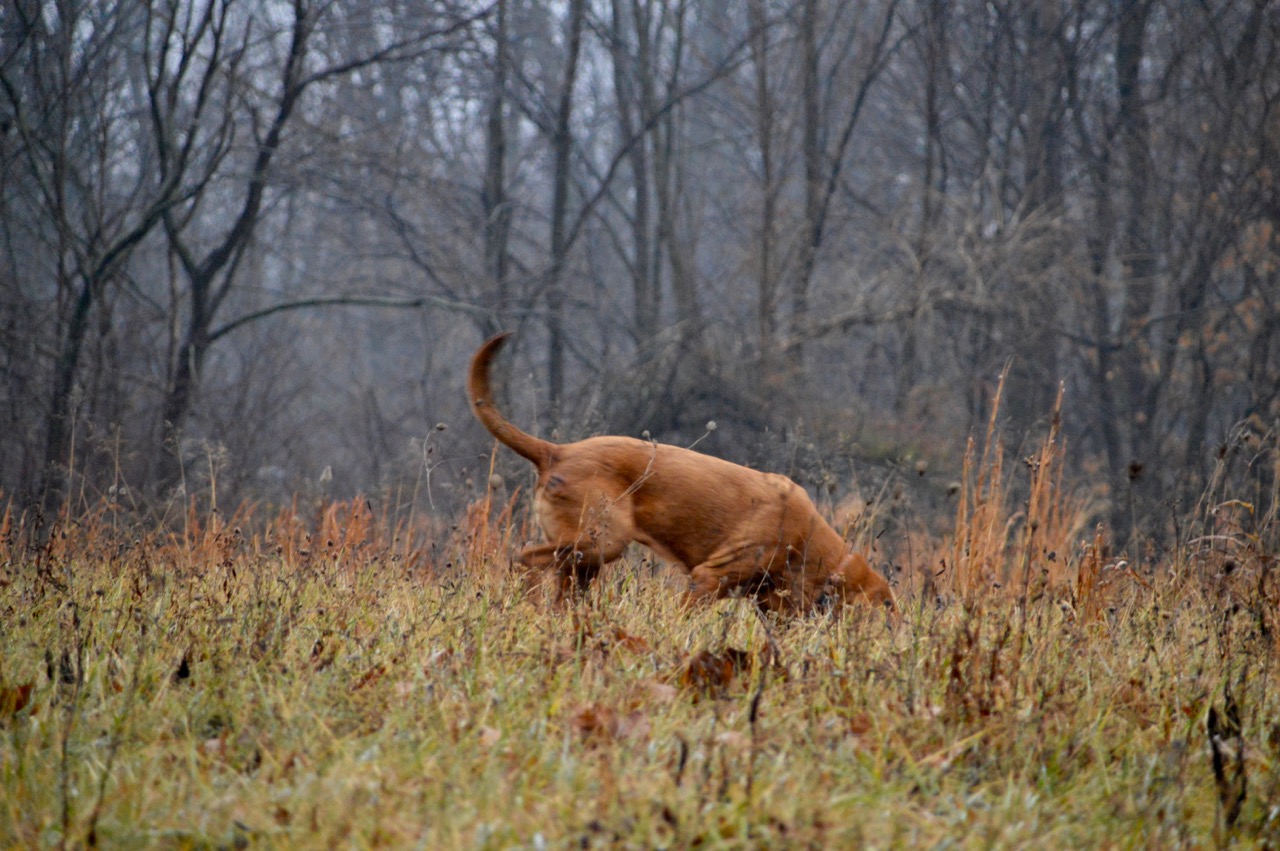 Stella surprised us all by taking off north in the yard ... opposite from Sadie and I. As I called her name she gradually turned and walked toward us. It took a while for her to get even close to us,  plus a little nudge from me to move her into the right direction. No doubt the most stubborn hound I've ever had in 30 years. 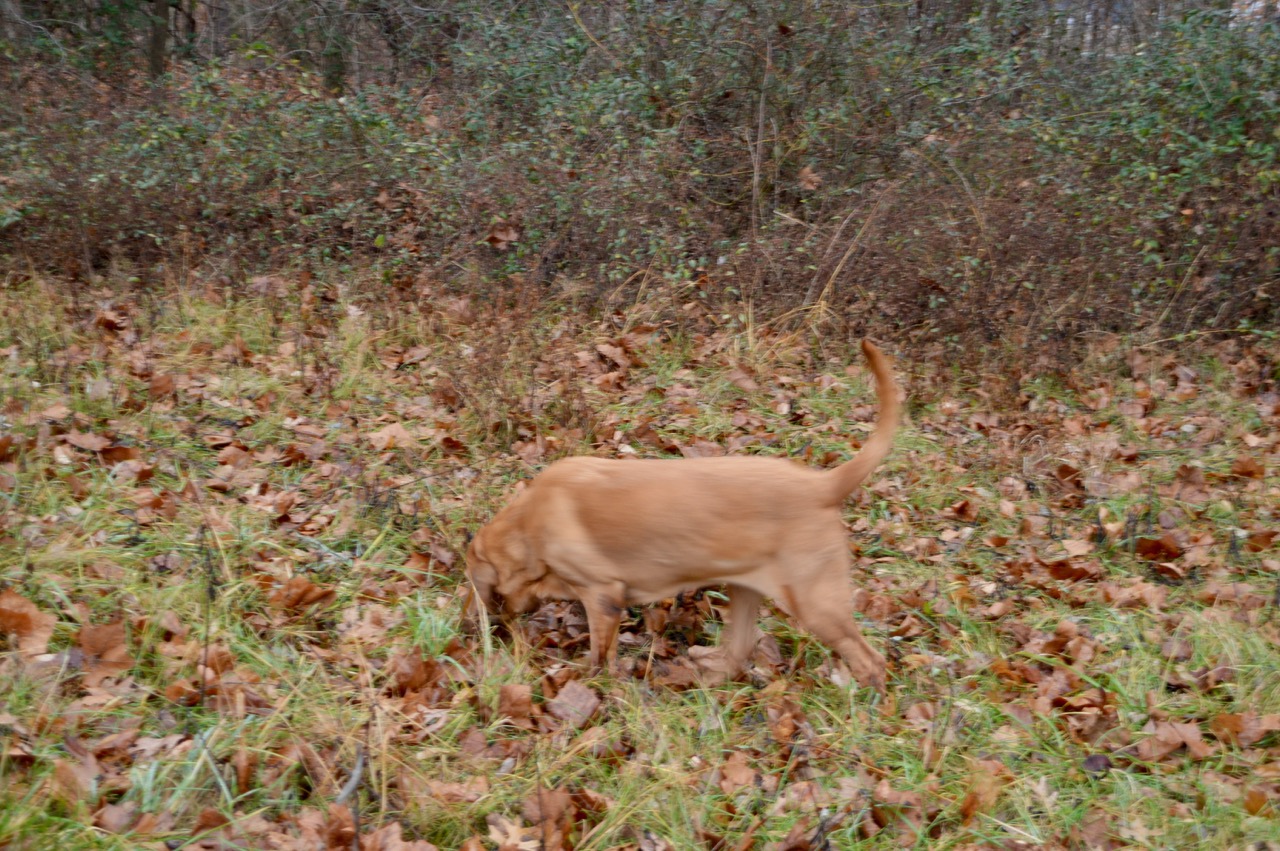 Sadie was moving fast enough with her nose to the ground that she was faster than the camera. Once Stella hit the path ... she and Sadie were running around that first turn. They know it will take me a while to catch up to them. 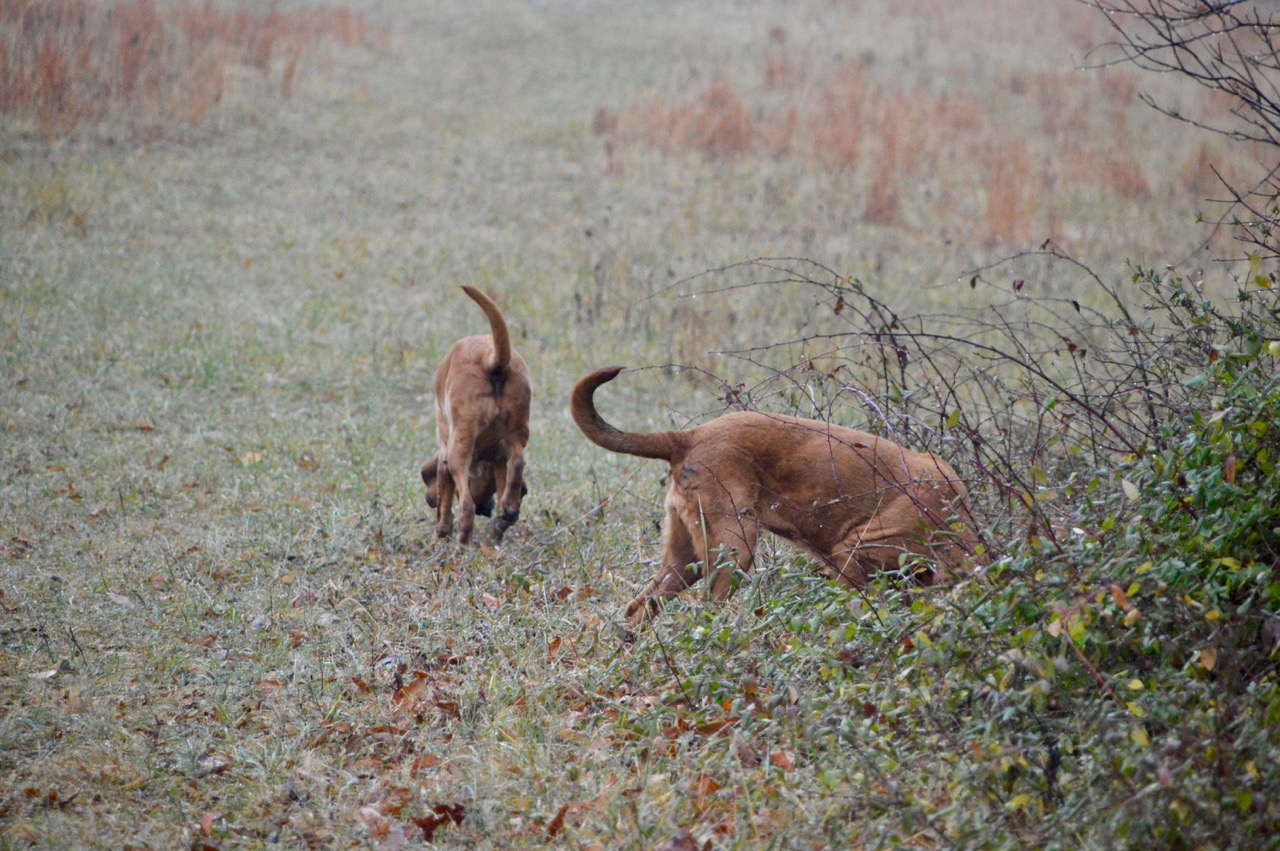 It's hard to tell but this is one of the worn paths into the woods the deer take. It goes through the brush and after about 10' will change to a steep gully. When she walks out of this area or any part of the woods there are still thorns that grab her coat and tangle her up at times. 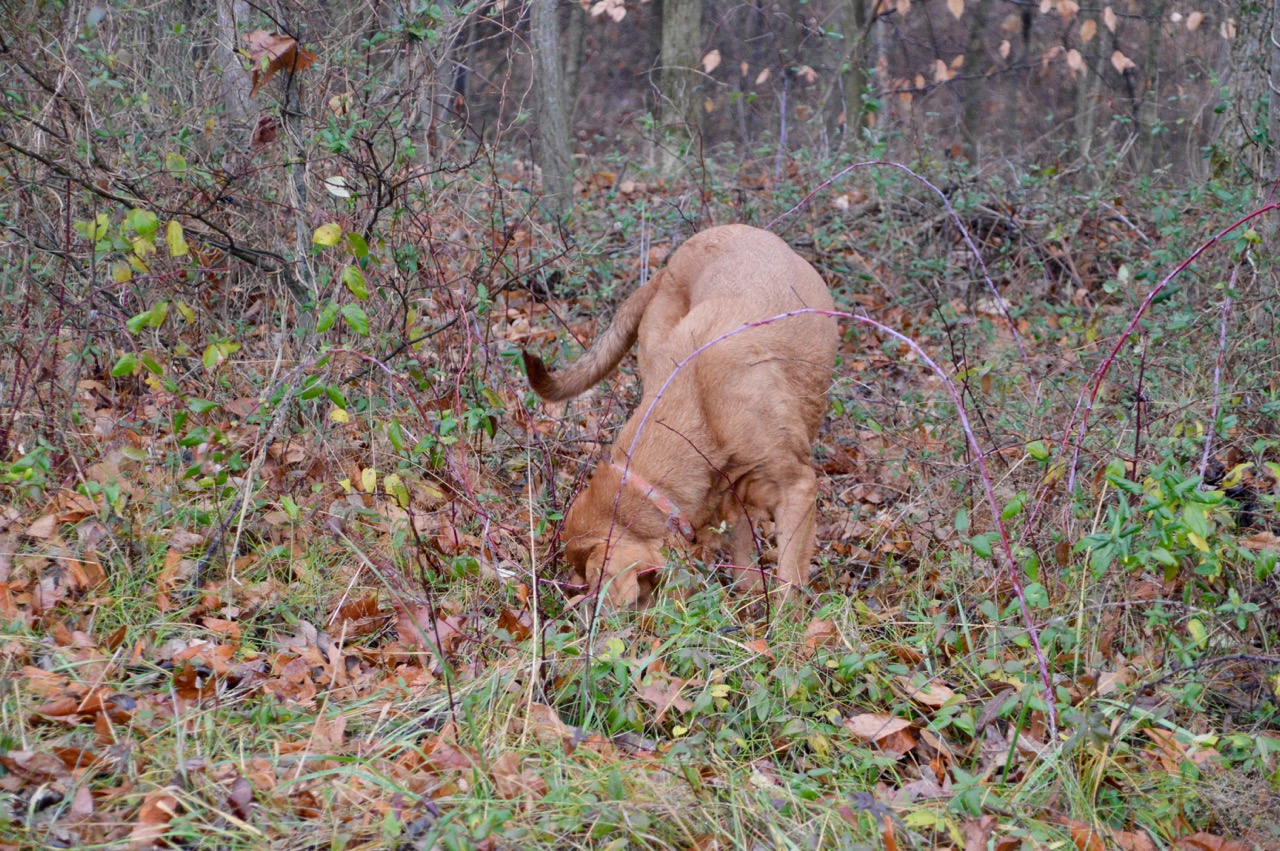 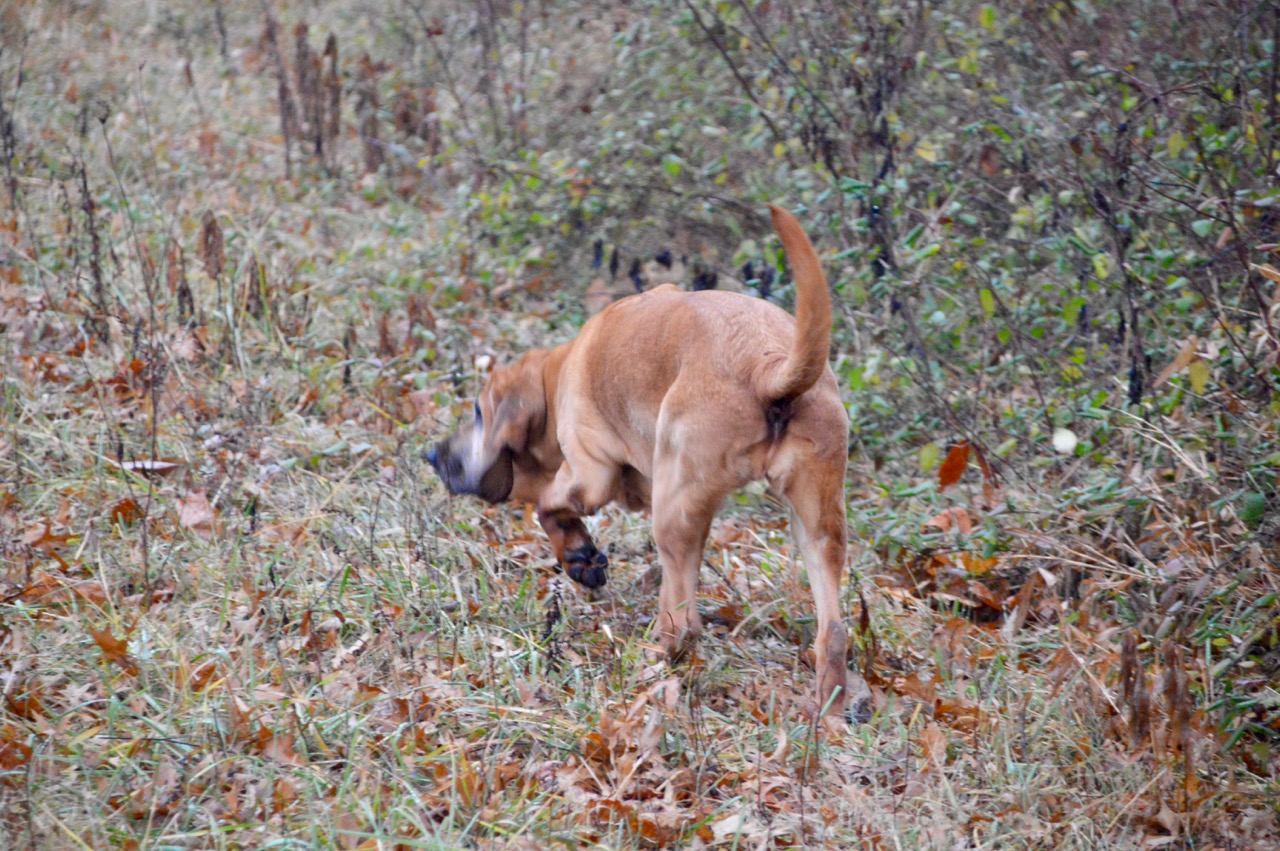 Sadie of course is on a scent and is focused on that ... nothing else. 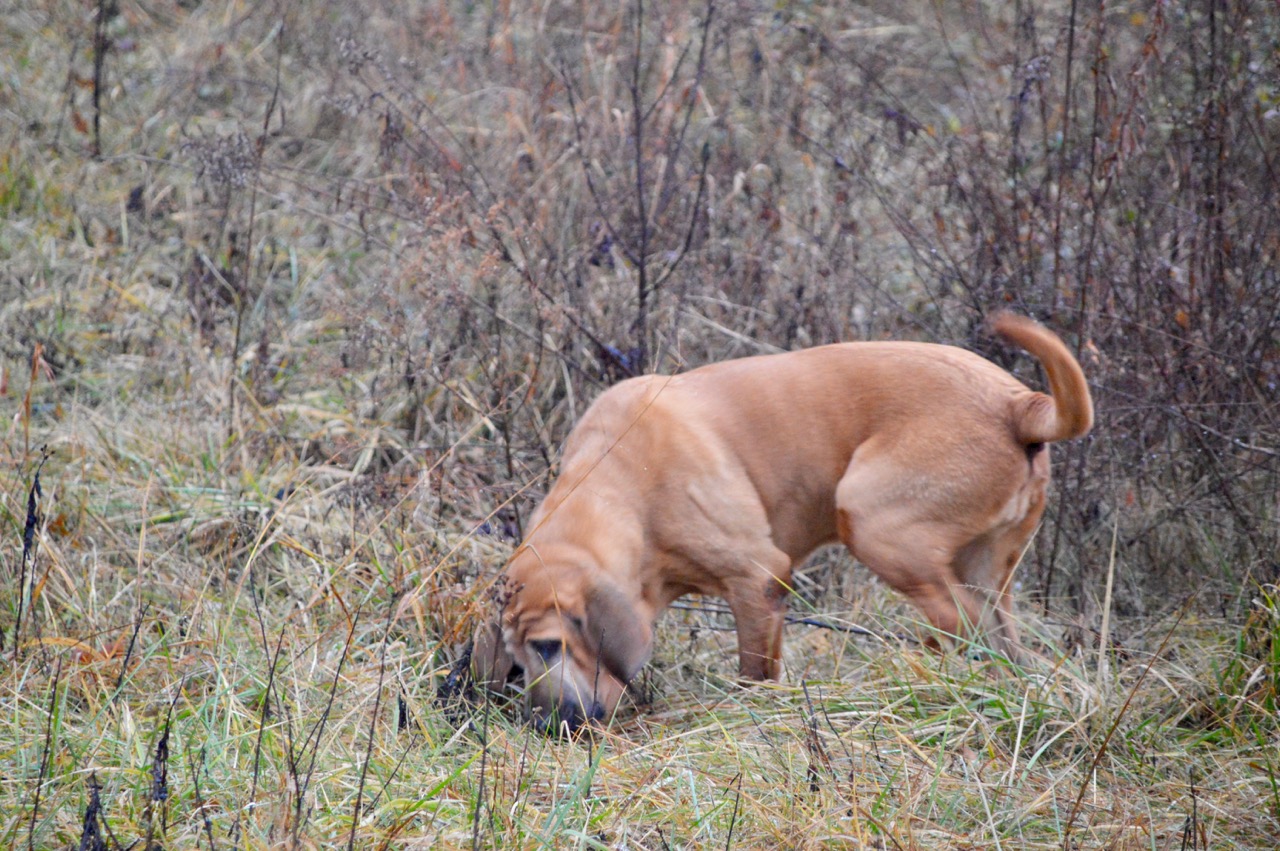 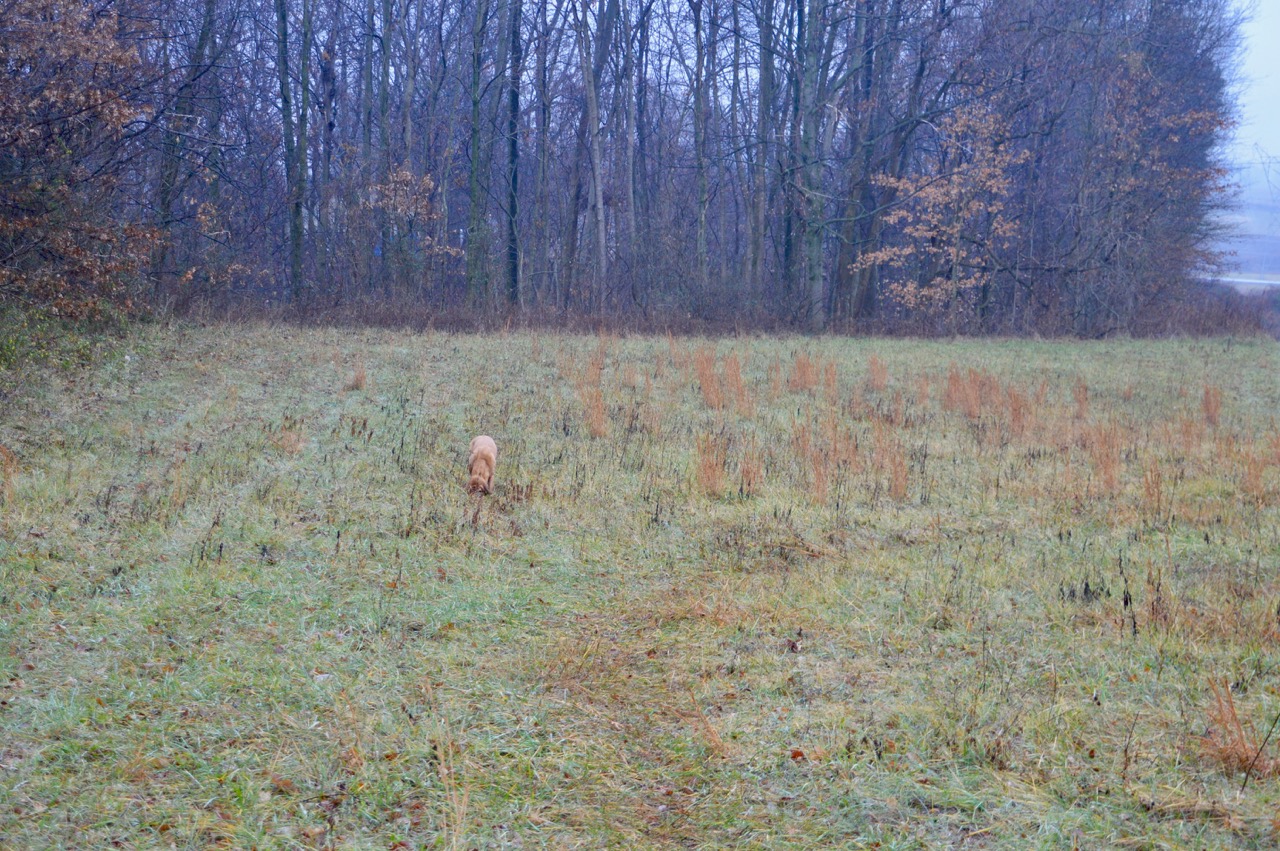 By the time I was walking about halfway down the back side of the field I could feel a drizzle of rain hitting my face. None of that made a difference to Sadie. She had a lot more area to inspect. 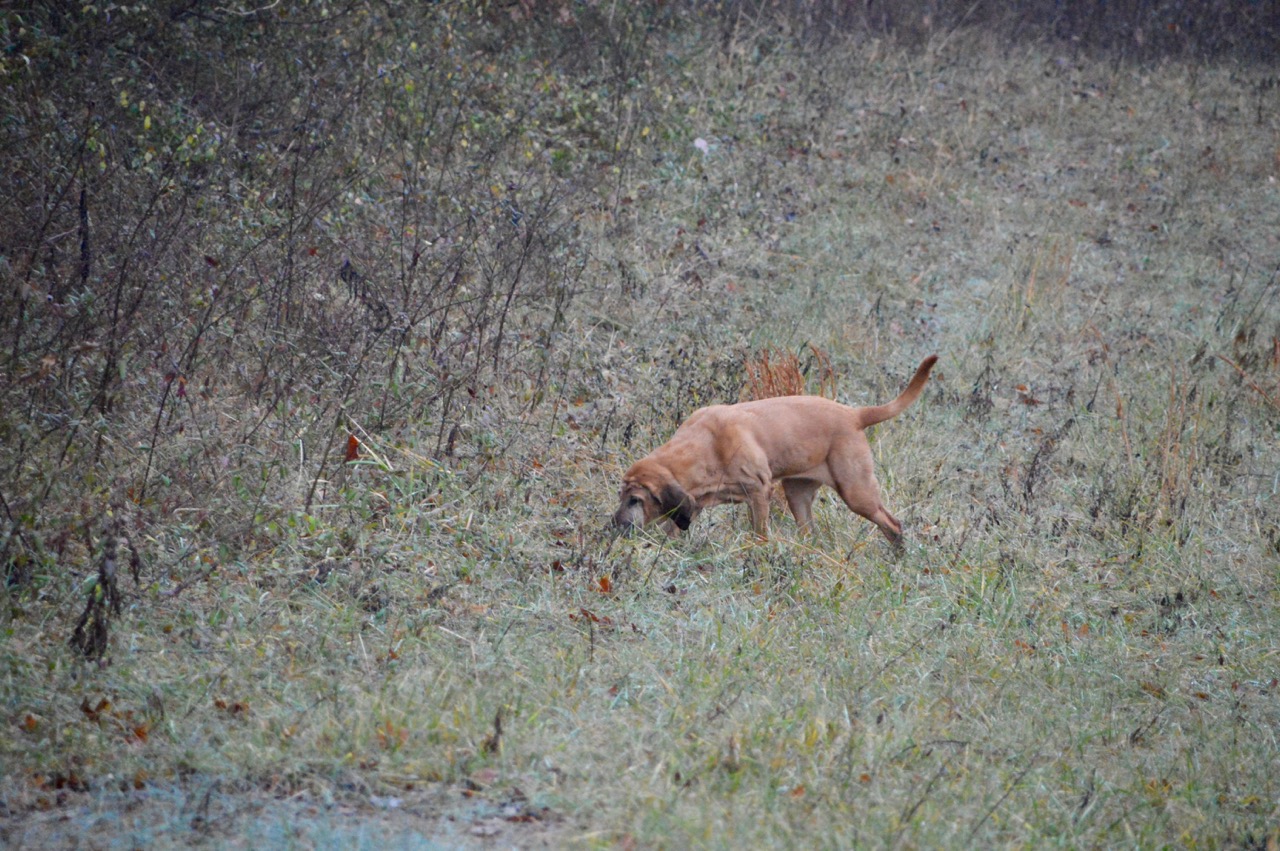 Sadie continued to inspect an inch at a time, along that back side of the field. 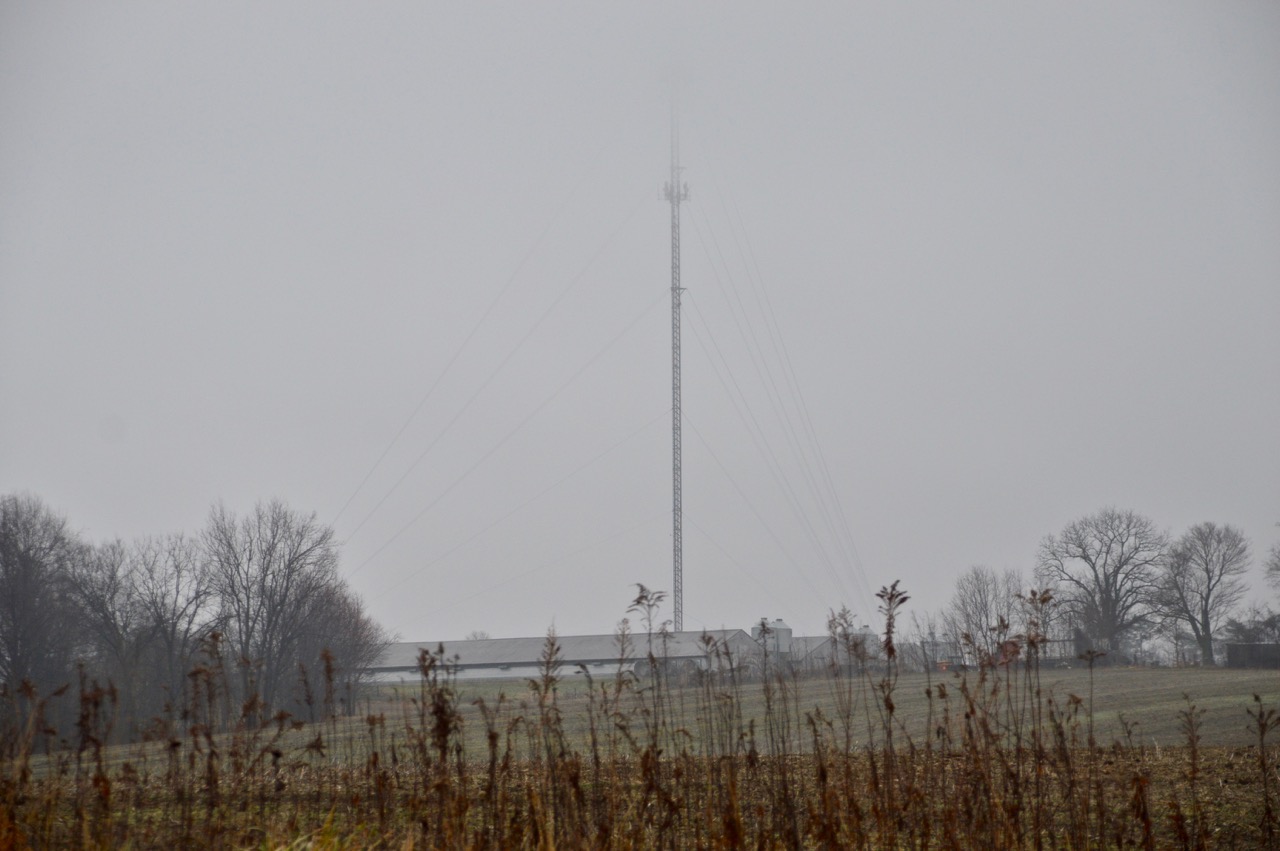 I didn't take this picture today to check the camera alignment but to capture the fog. It was almost 8:30am when I took this, so there is no chance of any sunshine today. 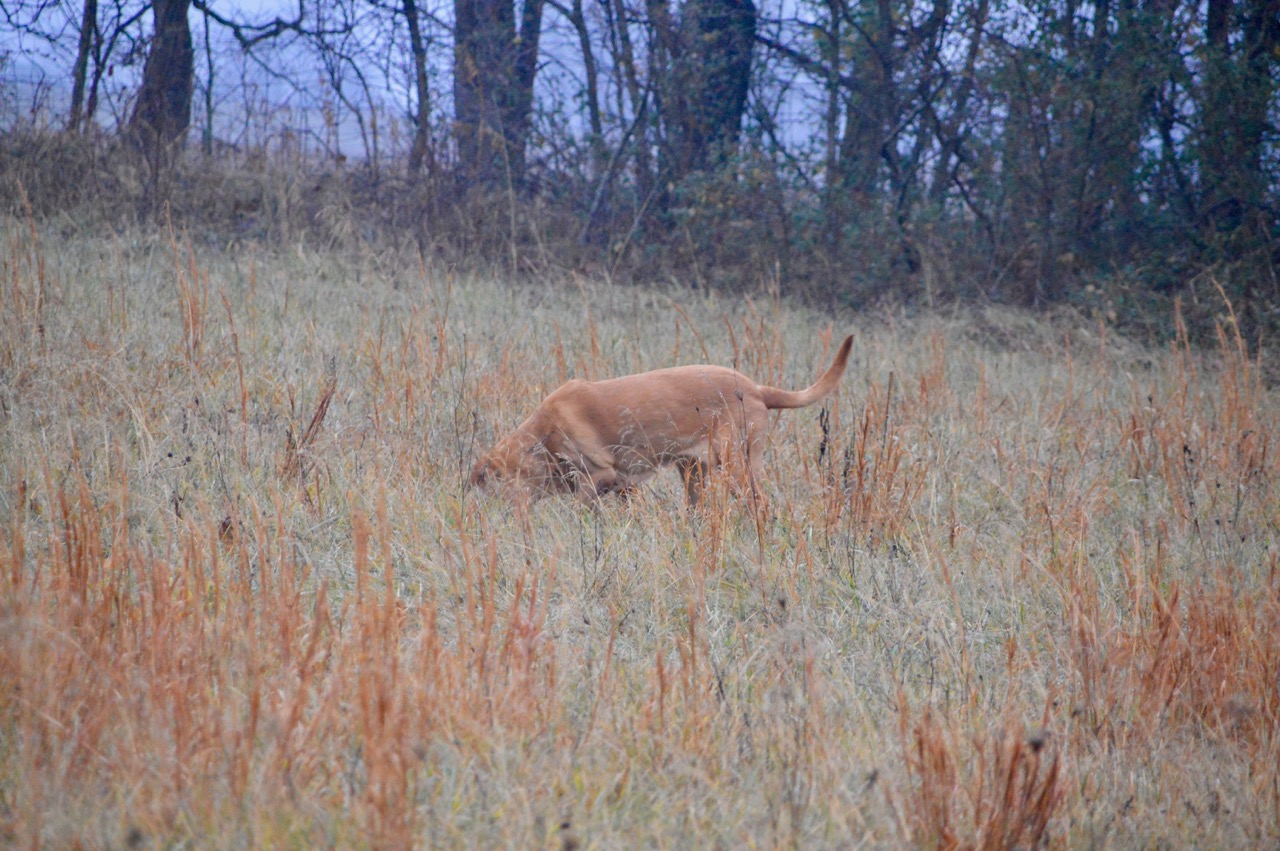 Turning toward home, the wind from the SW increased and was blowing light rain in my face. I could hear it hitting my rain jacket. 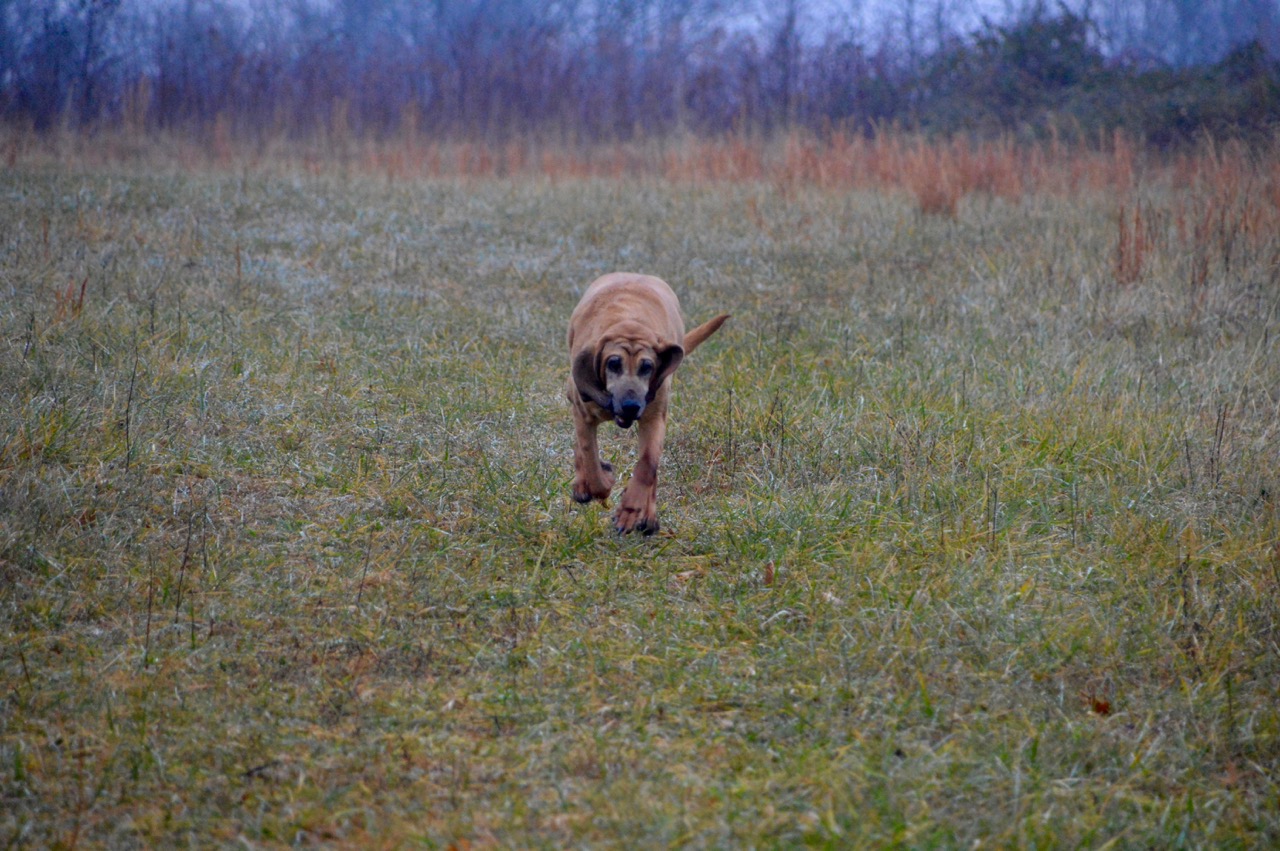 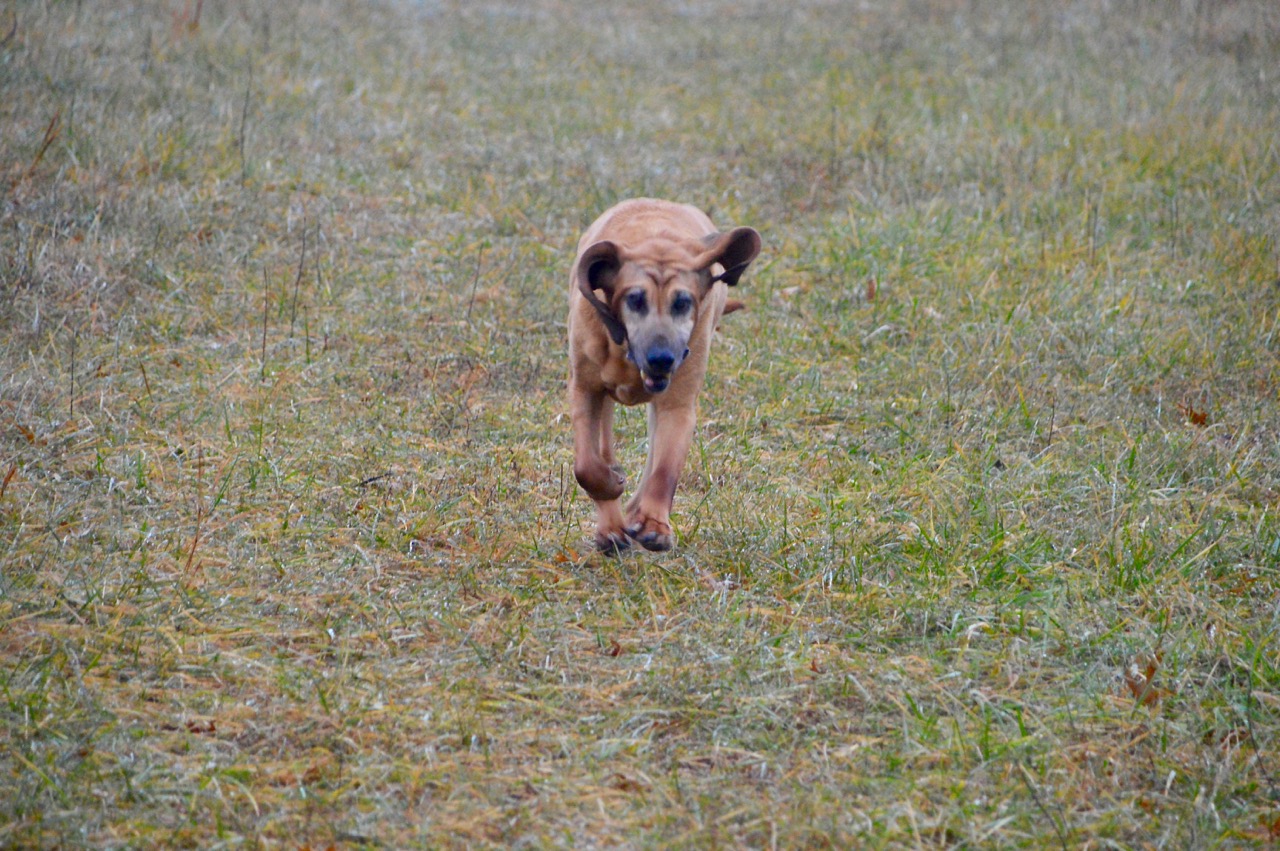 Sadie thought she was feeling the same rain so she started her sprint toward me without me saying a word. As I snapped the camera shutter as fast as the camera would focus, I came up with only four photos from the time she started running from the back of the field. One of them was too blurred to post. They will never run directly to the yard non-stop, no matter what the weather is doing. There is always something they need to check out before ending their walk. 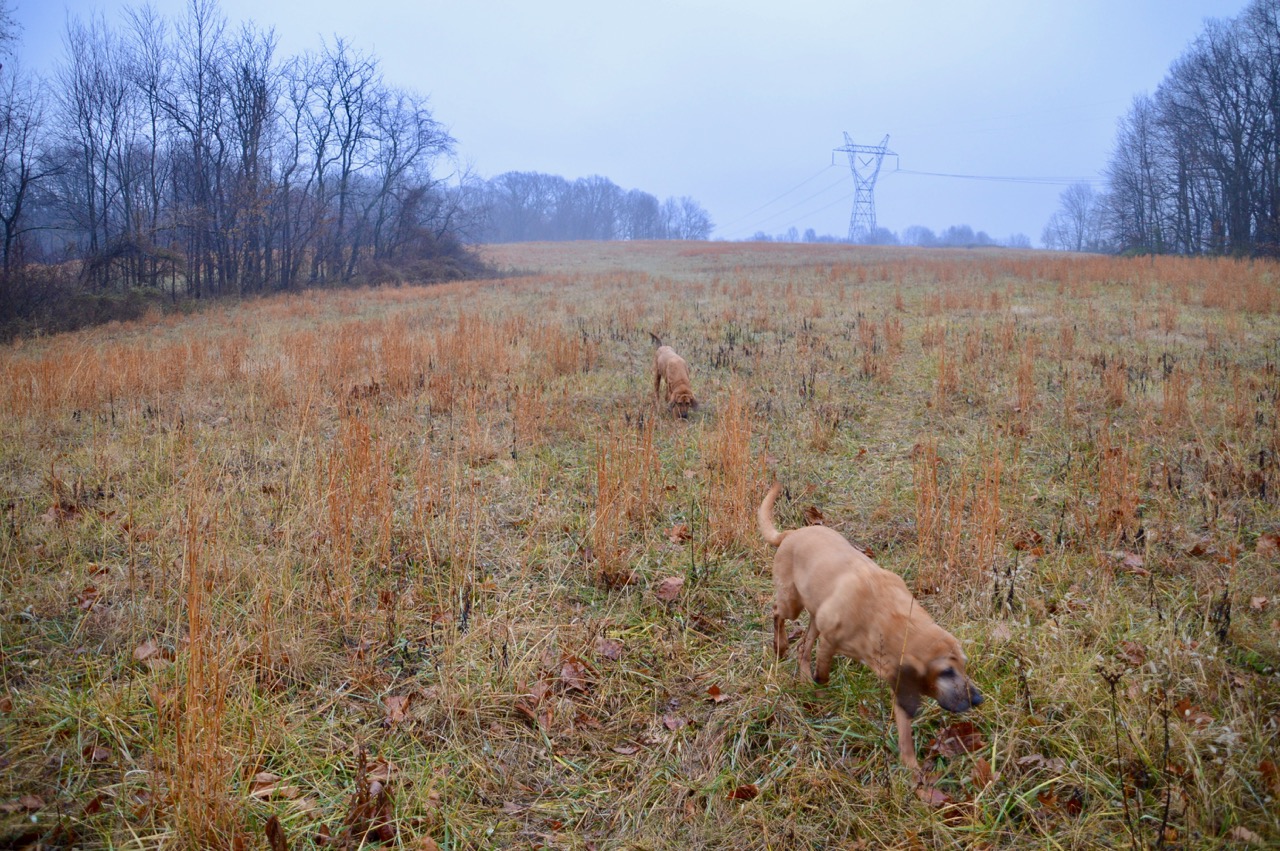 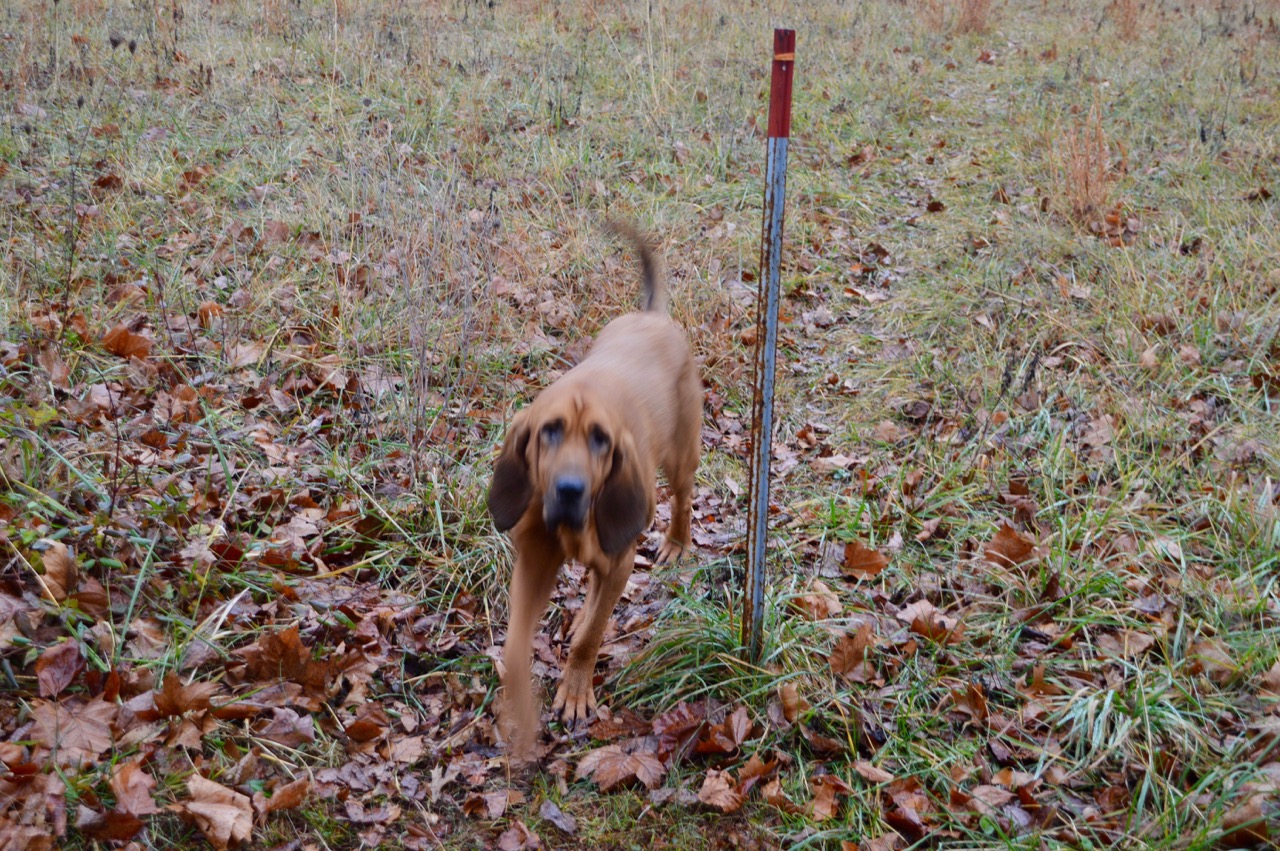 To Stella it's just another day ... no worries in the world ... just food, sleep and walks. Pretty simple life.

As expected, I found out after my first day of riding my bike inside for 30 minutes on a trainer yesterday afternoon, that I would need to take today off to recover. It will get better but it's always hard to start riding again and getting into bicycling shape. I have enough muscle pain today that even Ibuprofen is not working.

The Garmin Connect App sent me a new update the other day. Along with a new Apple update for the iPhone, I was hopeful that my Garmin VivoSmart 3 would connect to the new phone like it did with my 6s. So far this morning it has not. I'll find out later since I just turned the phone off to reboot it. I can download the Garmin data to my computer with no problem but it makes it so much more convenient to see that updated data on the phone.

I had something I was going to ask all of you on this post but now I can't remember what it was. Typical isn't it?

It's foggy, it's warm and only 3 days till Christmas for those that celebrate it. It's hard to believe how warm it is in 'the tropics' of Southern Indiana.
at December 22, 2017