Sadie Gets Irritable When Walks Are Canceled 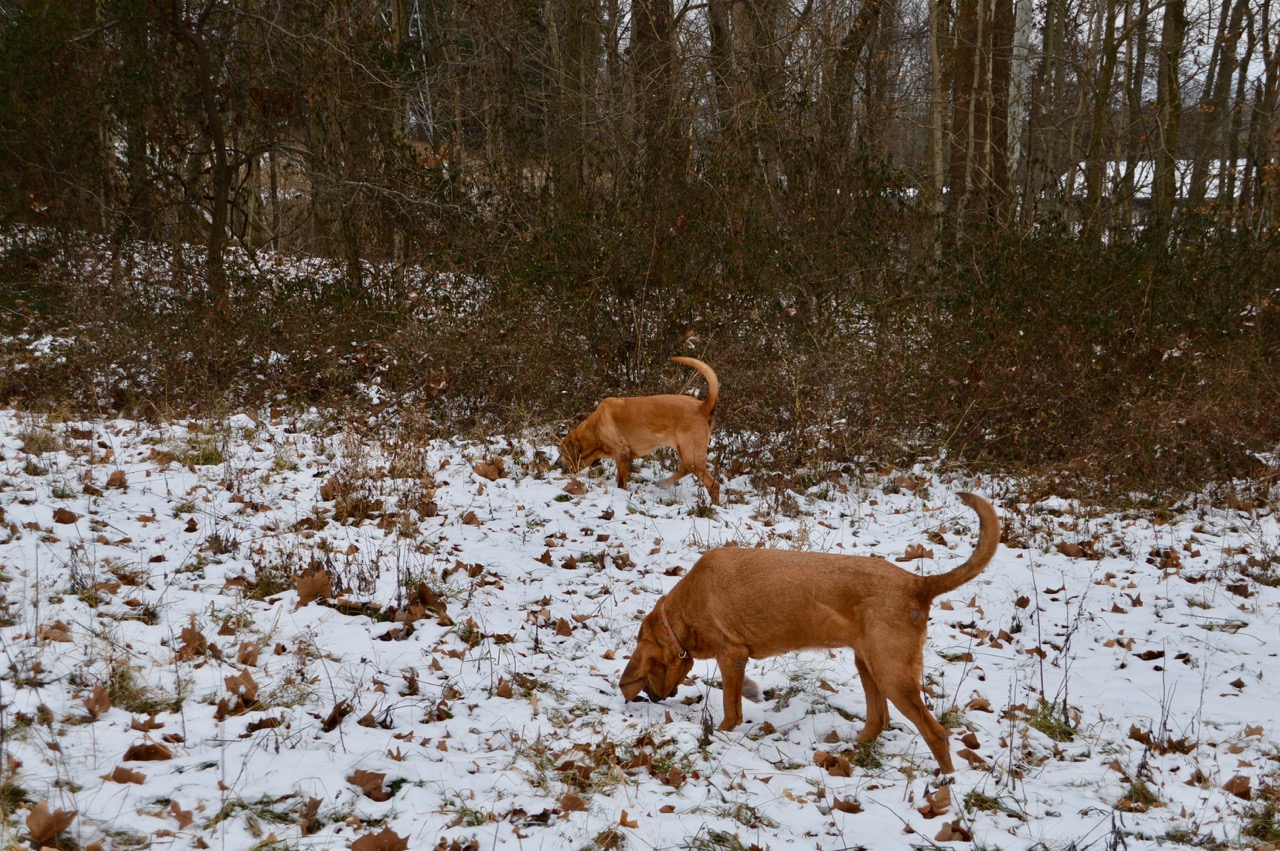 It seems to happen more during the cold weather we are having compared to the extremely hot days in July or August. Before Sadie gets her first walk of the day or her second one after lunch, she gets irritated. She jumps up thinking we are going for a walk every time I get out of my chair or off the couch. She can't relax, until she has her walks. That could be a problem this afternoon and the next few days with the arctic push arriving later today. 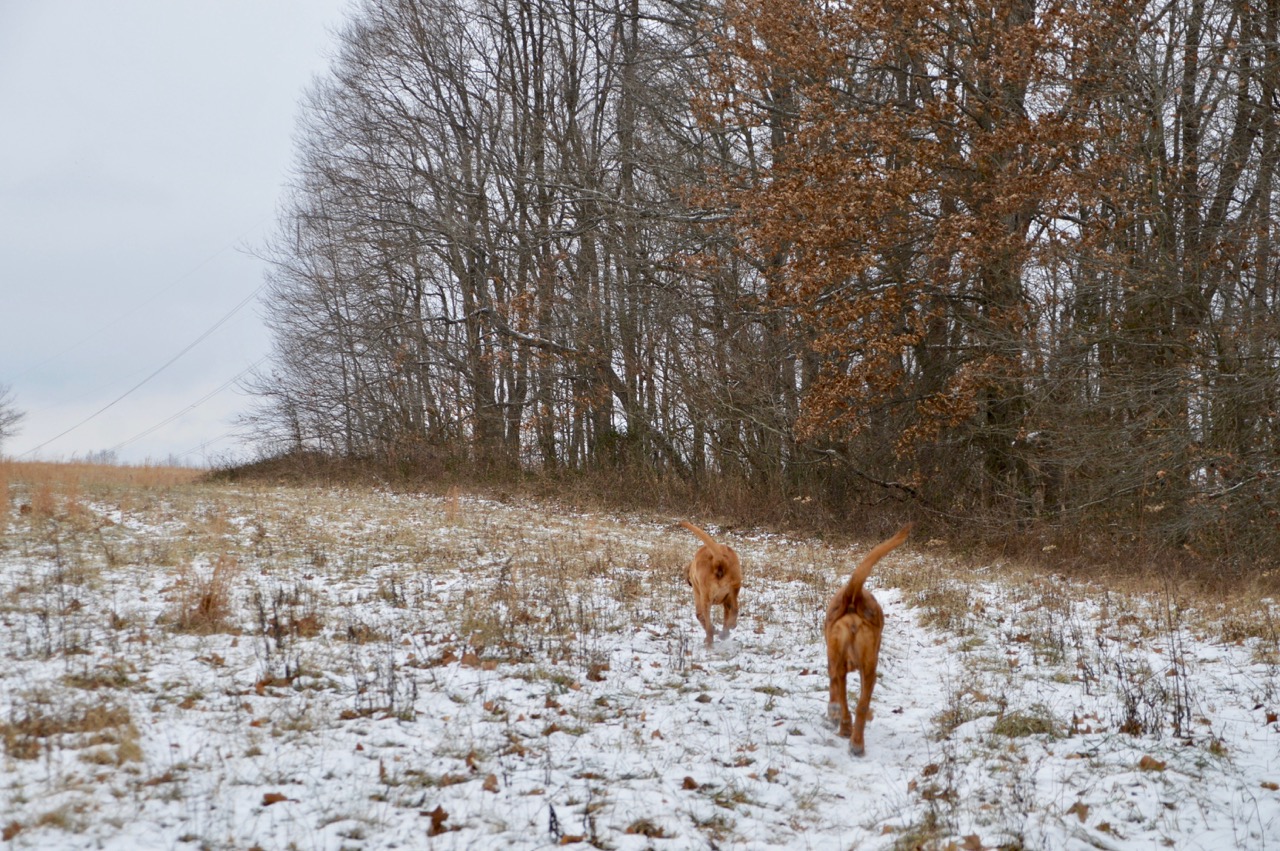 So, she won the battle this morning and we finally got outside around 9:30am with a windchill of 10°. Winds were strong out of the NW, freezing the left side of my face and nose on the first half of the walk. It felt like the forecast was going to be correct with the arctic storm blowing into town sometime this afternoon and dropping our temps from 20° to 5°. Sadie trotted, Stella walked slowly. 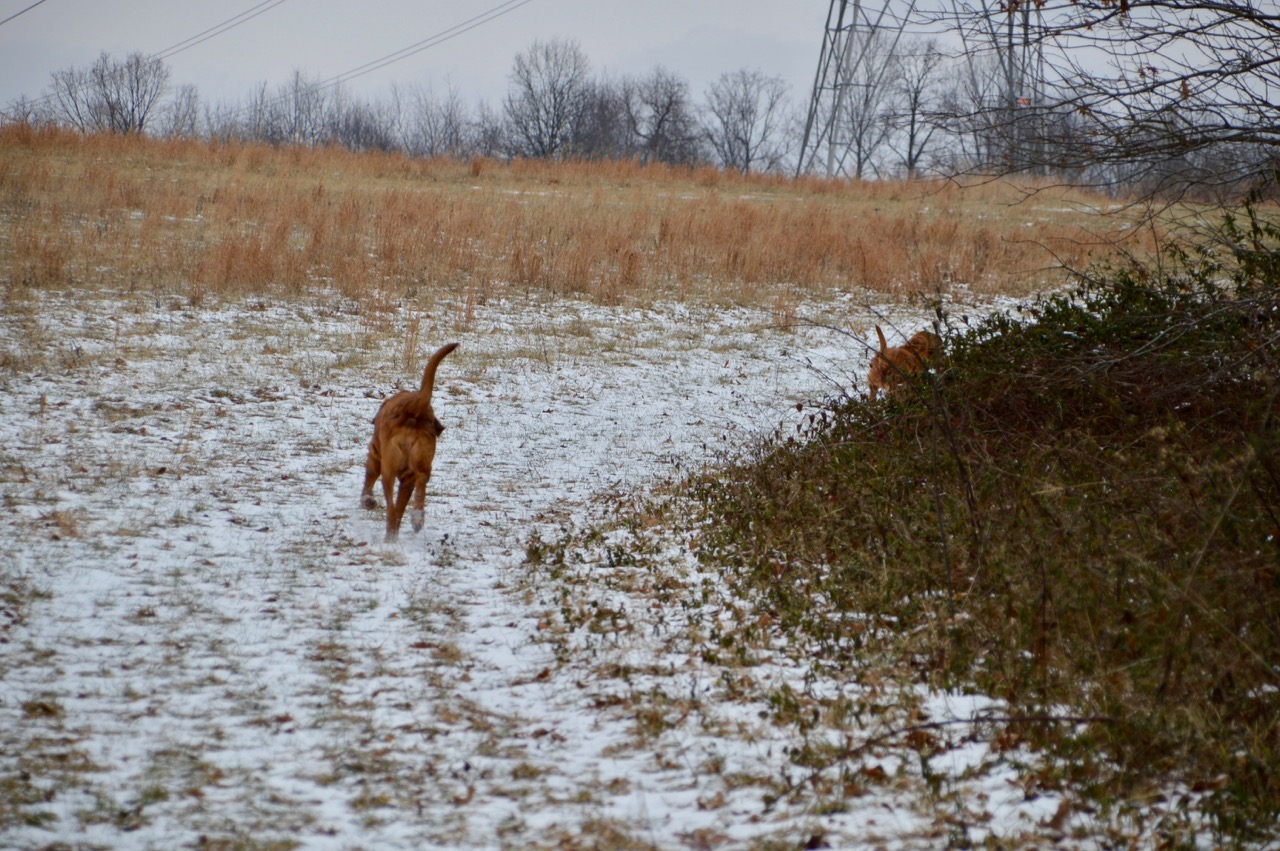 The hounds enjoyed this morning's walk, each doing their own thing. It was a pleasant surprise that they walked side by side on the path toward home, then ran toward the house passing me by in the backyard. I would have never guessed that just at the point of the first turn. 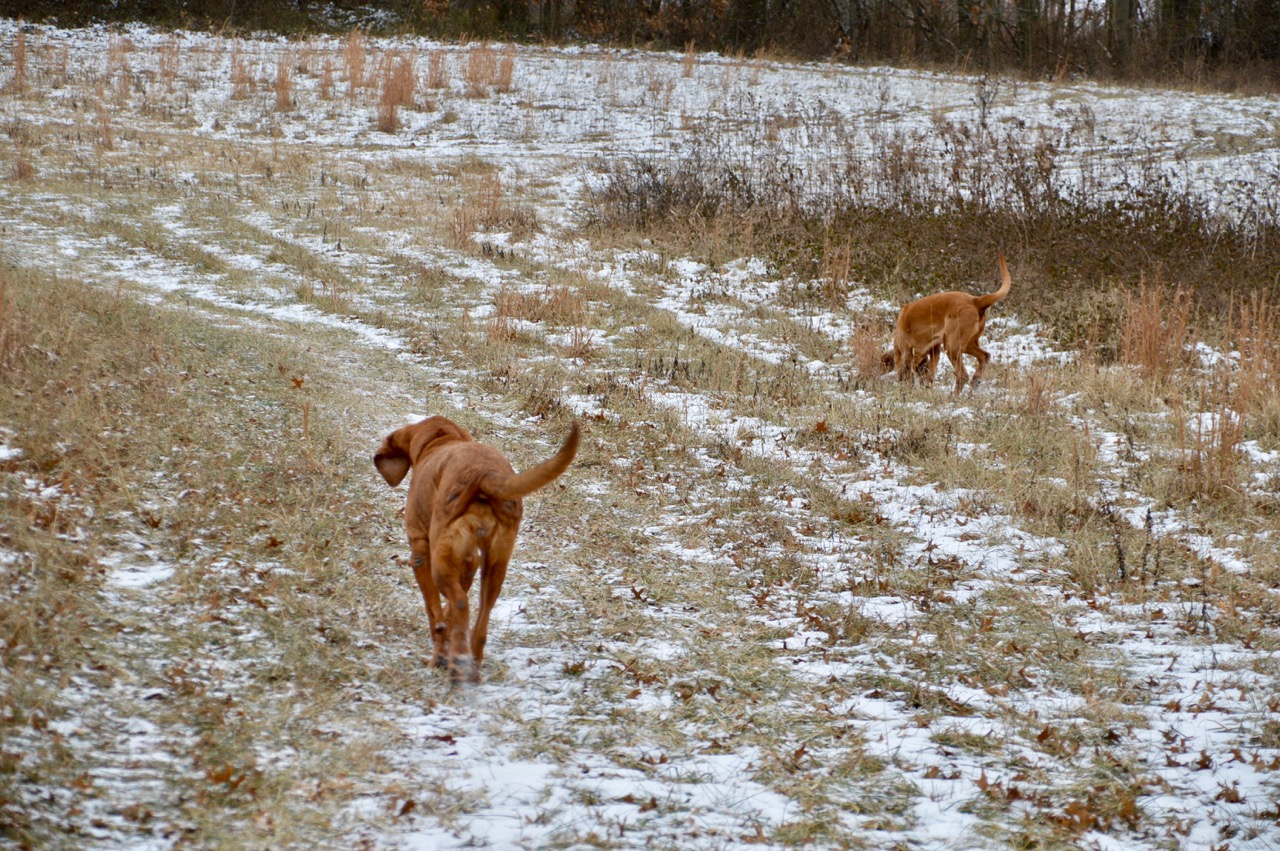 I know, another weather update but that seems to be about all to write about lately. I did get to watch two football games last night while the hounds slept in their normal living room positions. I watched part of and taped a basketball game that I will watch after I post this. There is not much planned for the rest of the day, except staying warm. 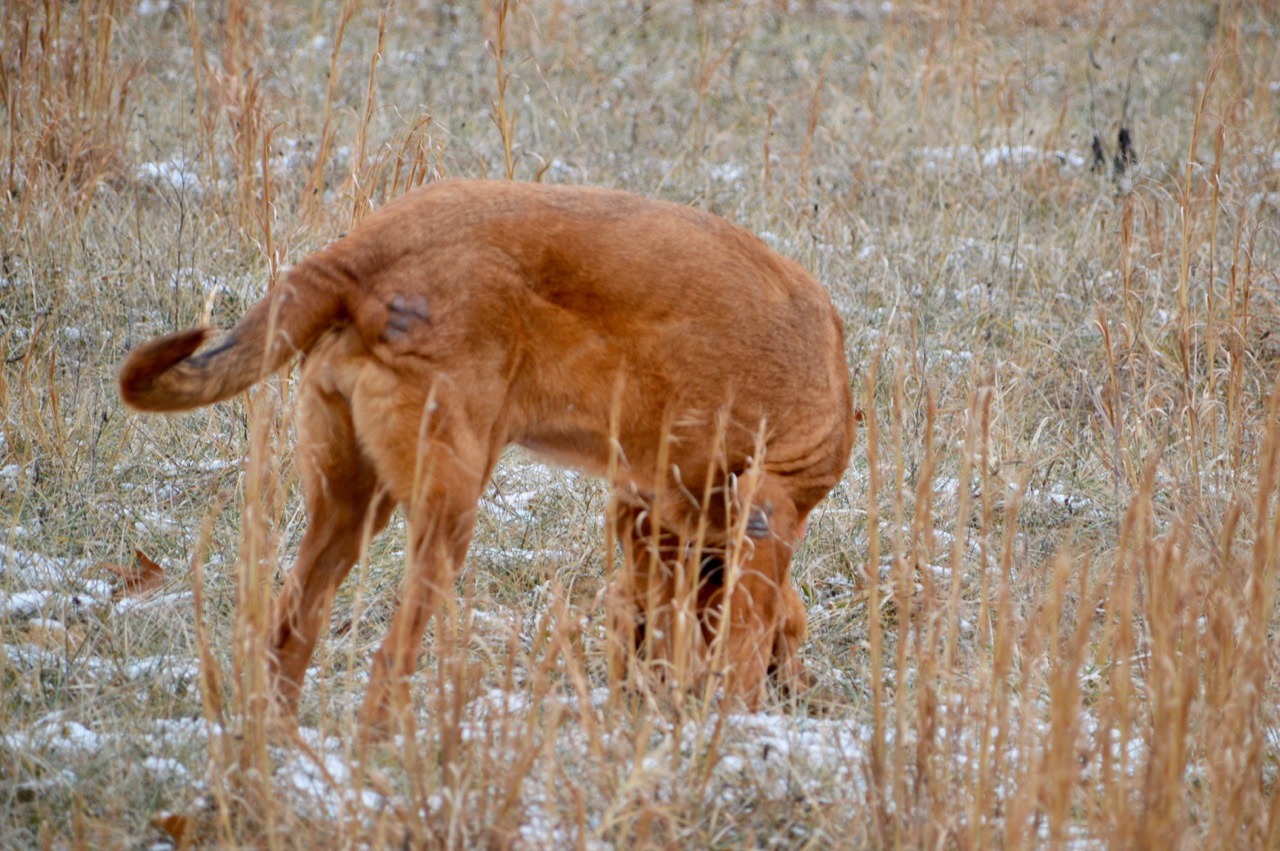 When the hounds split up running in the back field and headed opposite directions I knew I was going to have to herd them back together on the way back home. There was no way I could leave them outside on their own. Stella was exploring the middle of the back part of the field. The wind was stronger and much colder out in the open. 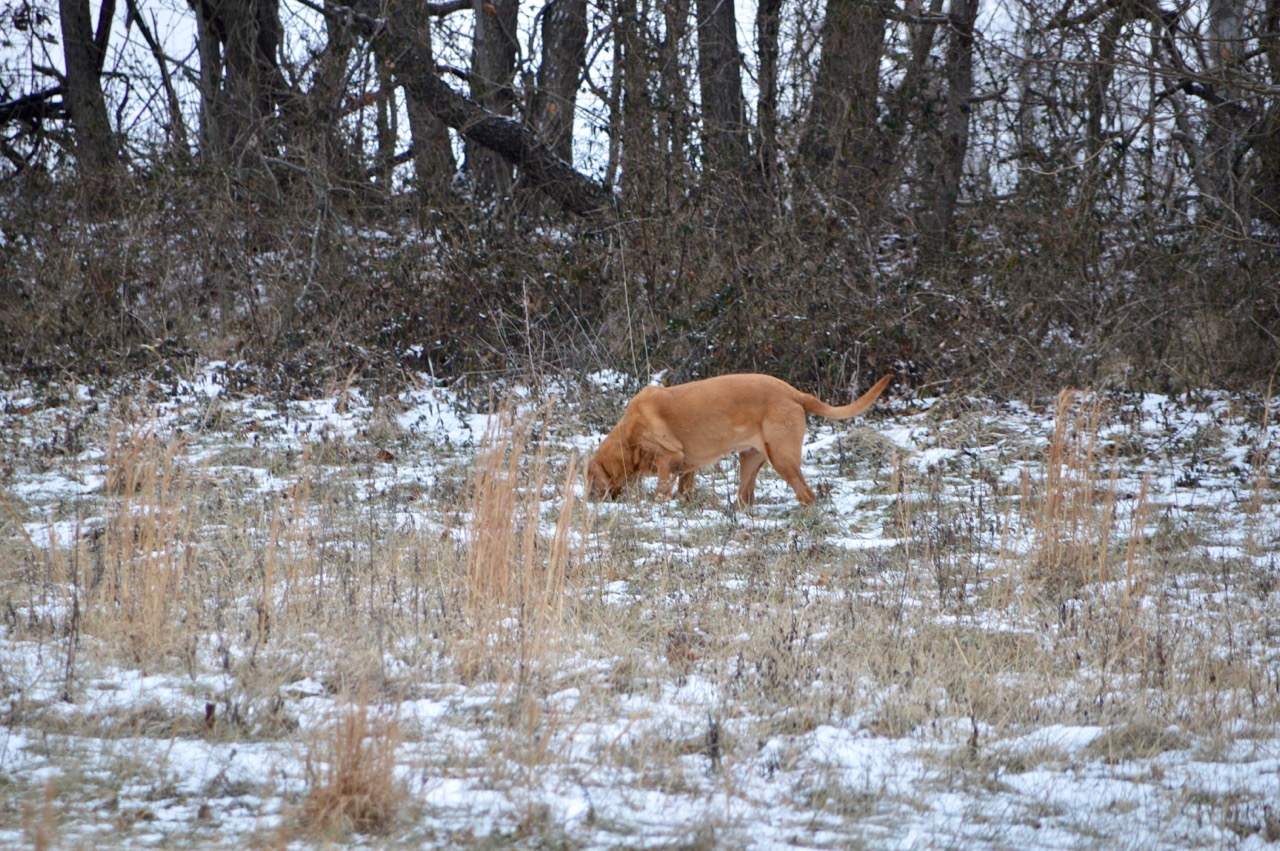 Sadie had sprinted to the back right corner of the field then started tracking along the edge between the brush and the field. I wasn't even close to the back of the field yet and she was already there. 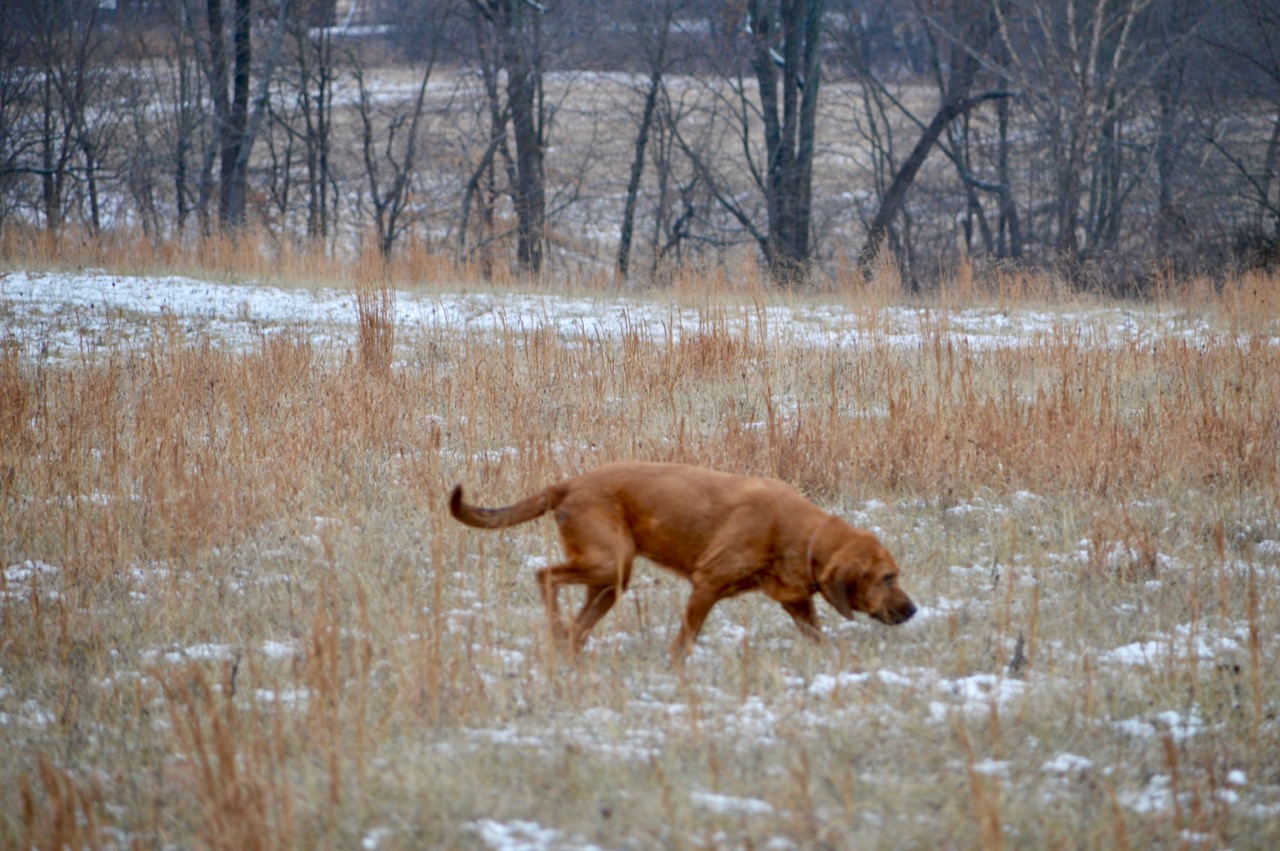 Stella was actually heading toward our return path ... she must have felt it was warmer than my iPhone weather app was telling me. 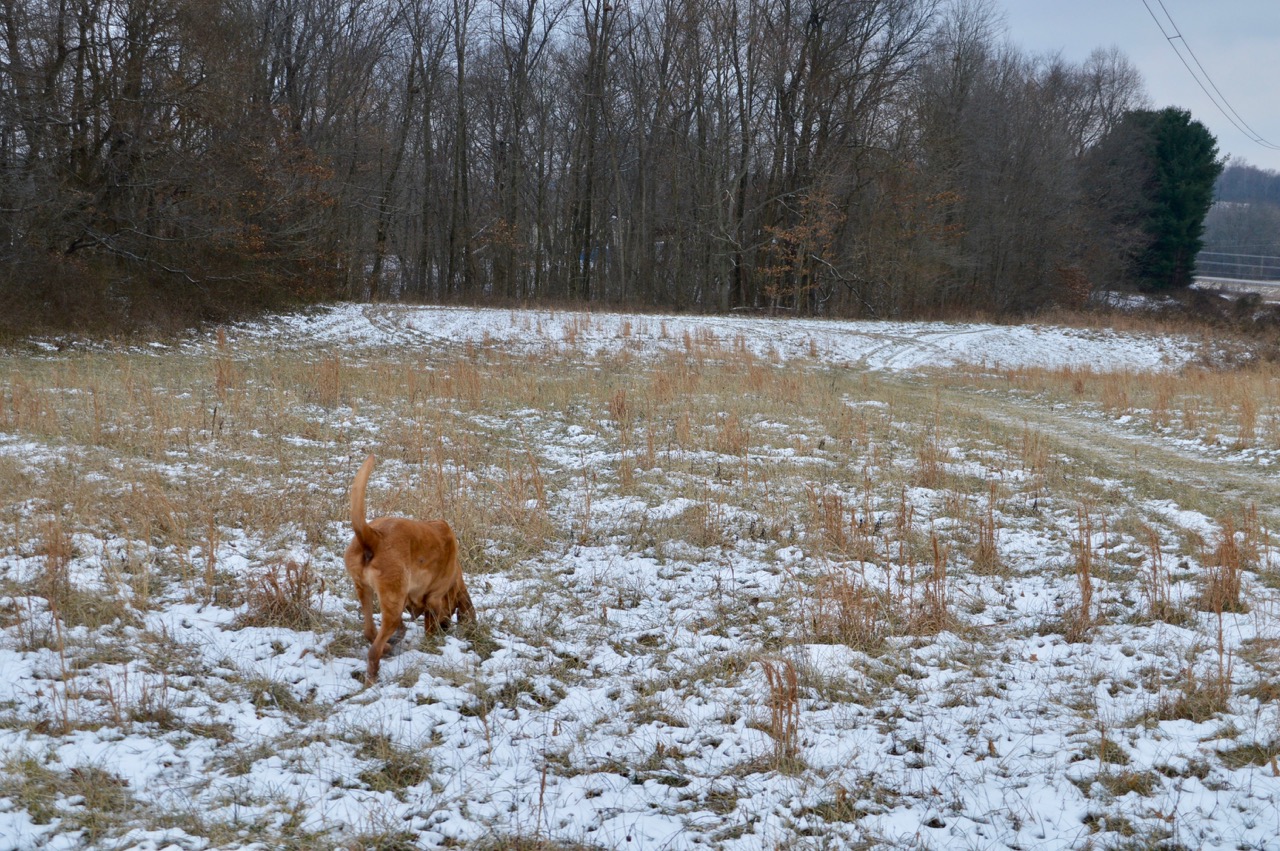 I have not heard nor seen the ATV since earlier in the week. I am always on the look-out for the sound or sight of it while we take our walk. Chris is pretty good about not getting close to us the few times I've seen him but it's always good to be safe when hounds and moving objects are involved. 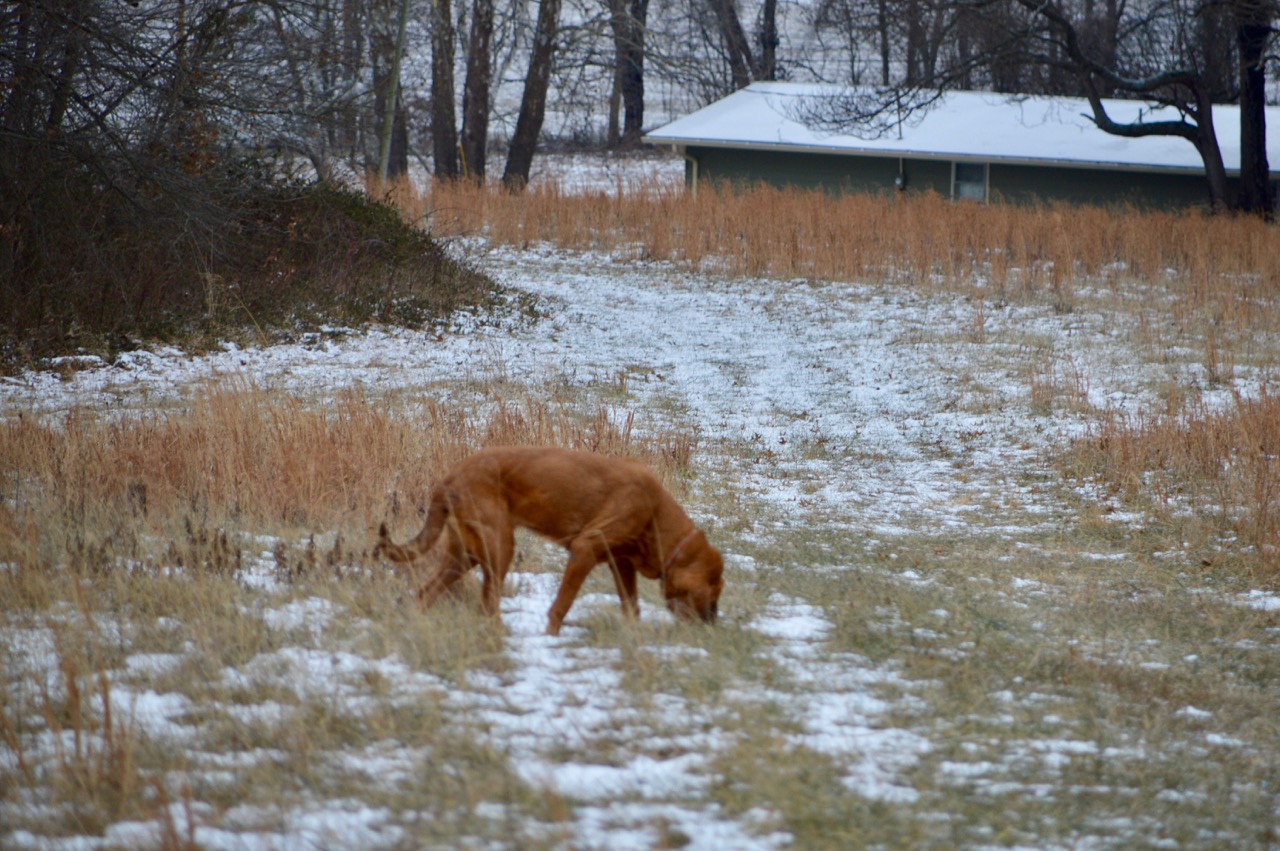 I had to zoom to 200mm to get this close to Stella. 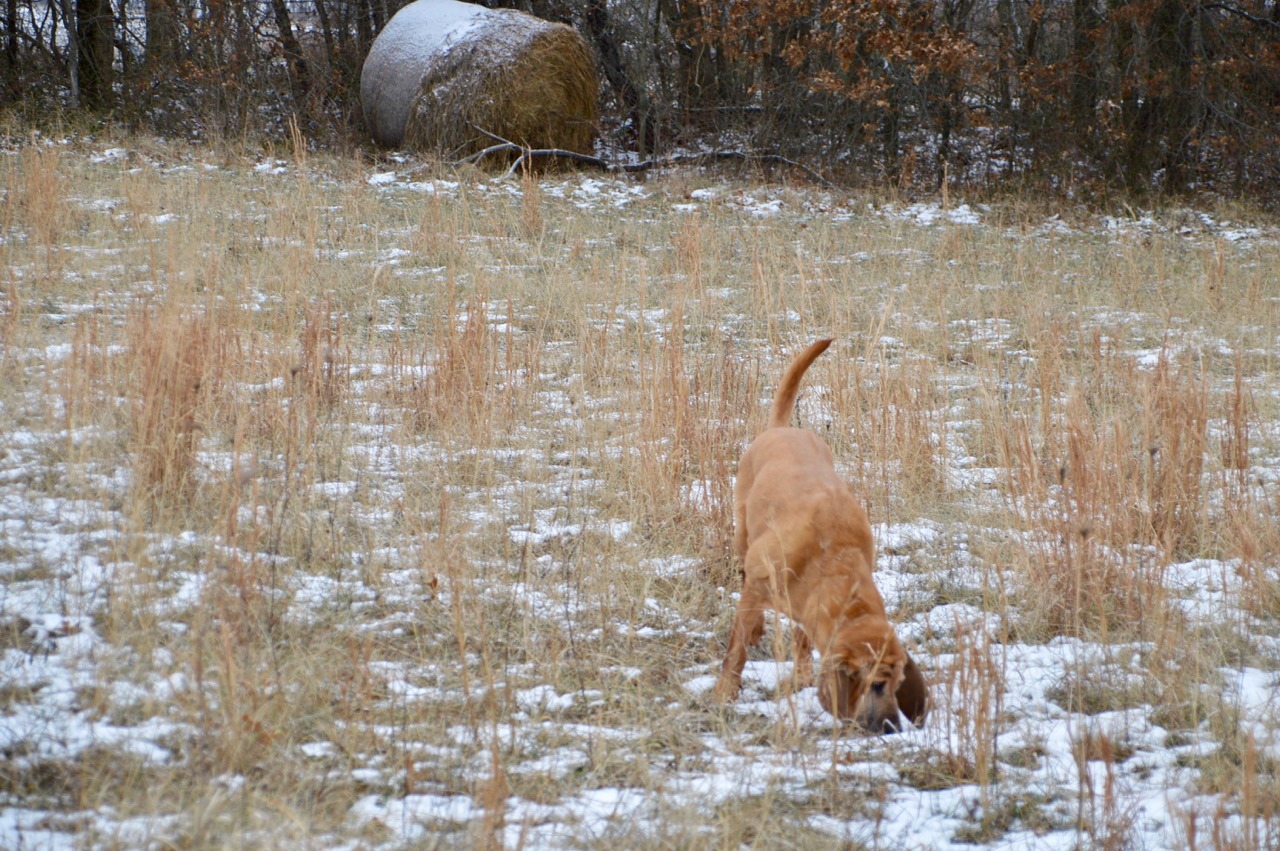 Plus Sadie was still pretty far behind me, where the 200mm zoom was also required. She would eventually start running toward me but not until she was ready to, not when I called her. 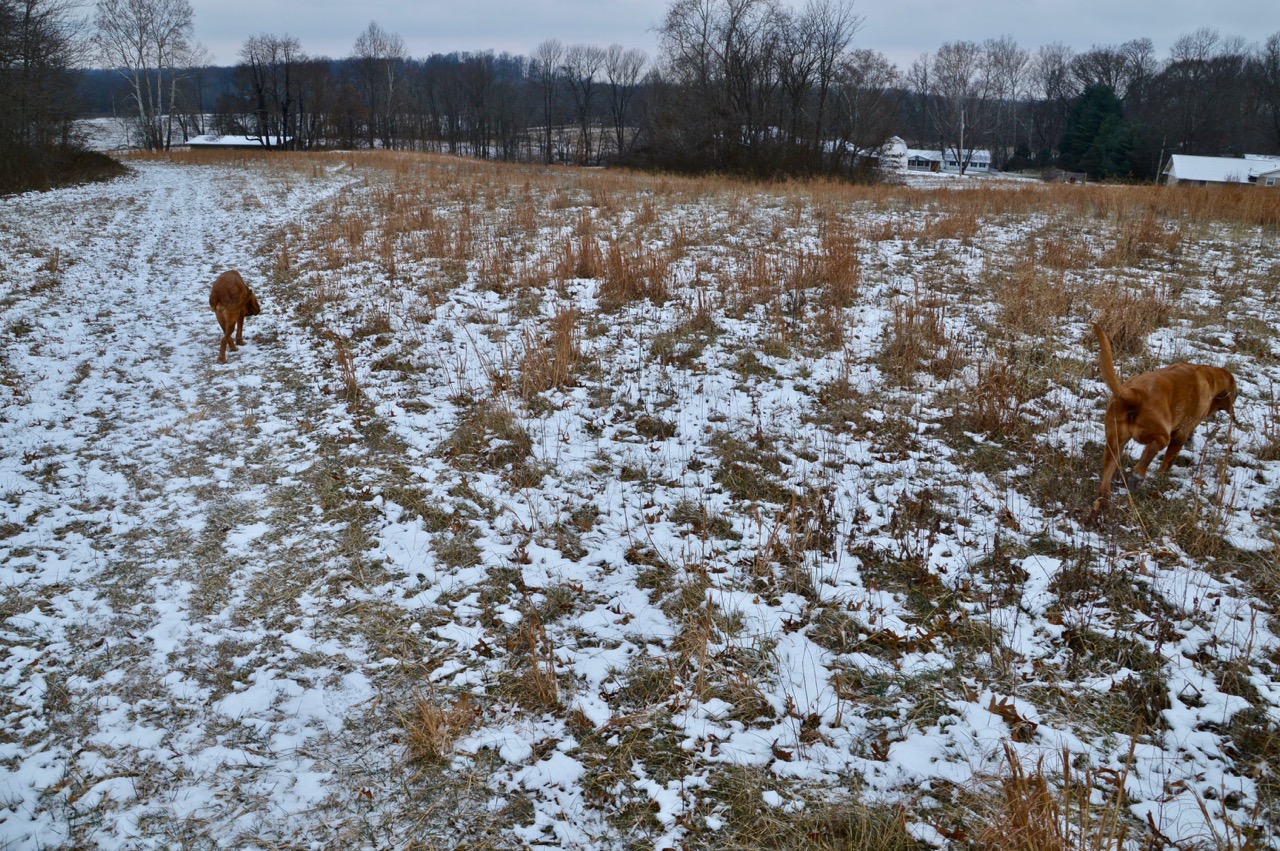 When I told them "let's go home" they both headed off in the general direction. 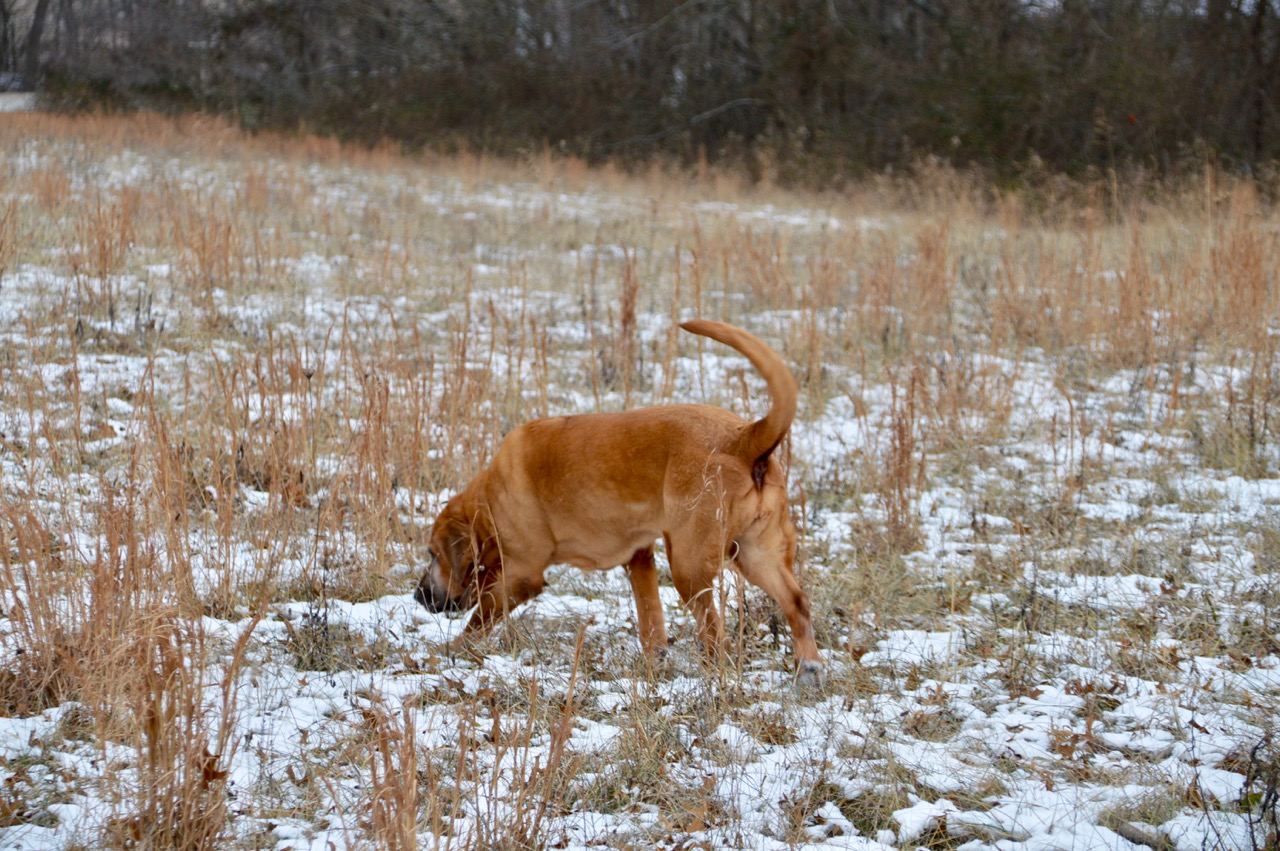 Sadie continued her exploration. I really think she would stay outside in all of this weather all day if I would let her. She is probably more of an outside dog rather than a house dog. 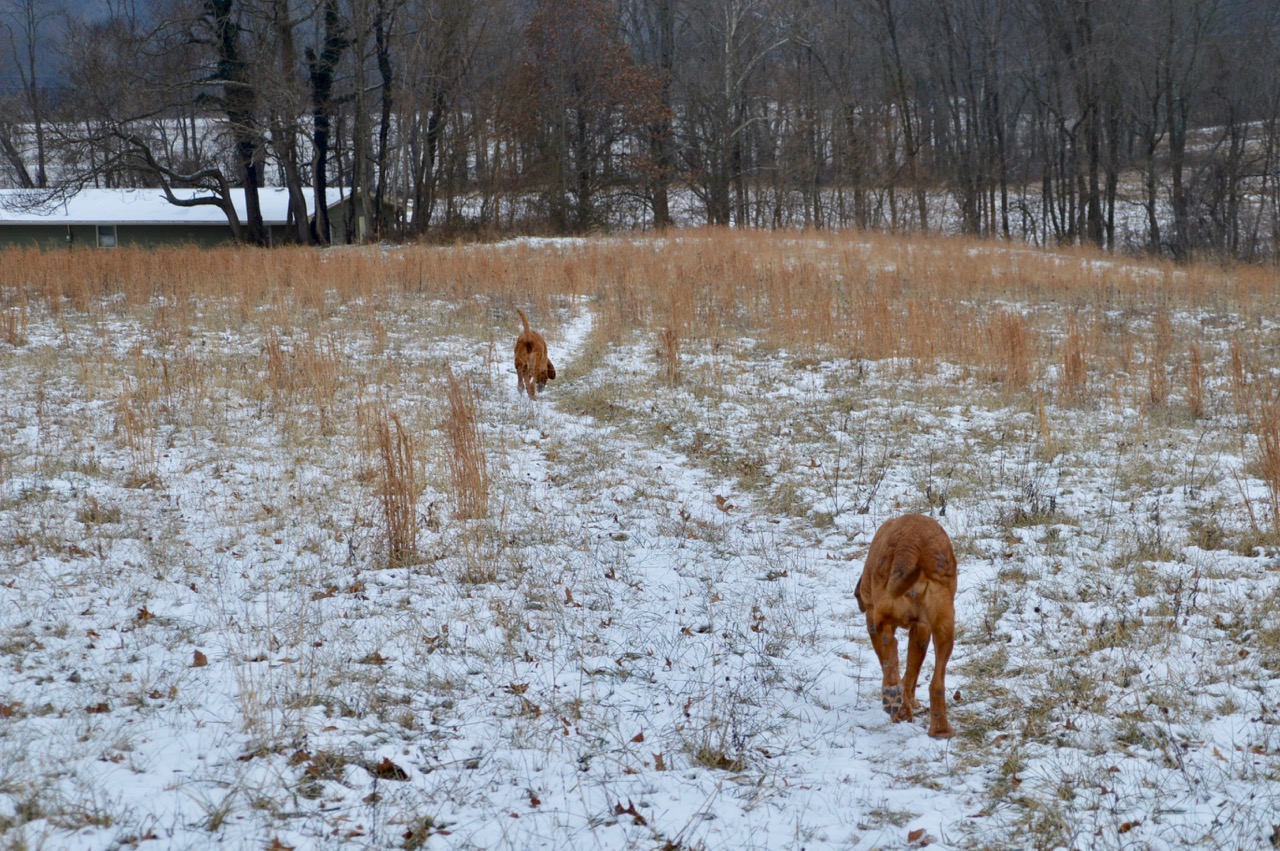 Stella might have been taking her time walking toward the house with Sadie up ahead of us but all of the sudden she decided it was warmer there than where we were. She took of trotting after Sadie. 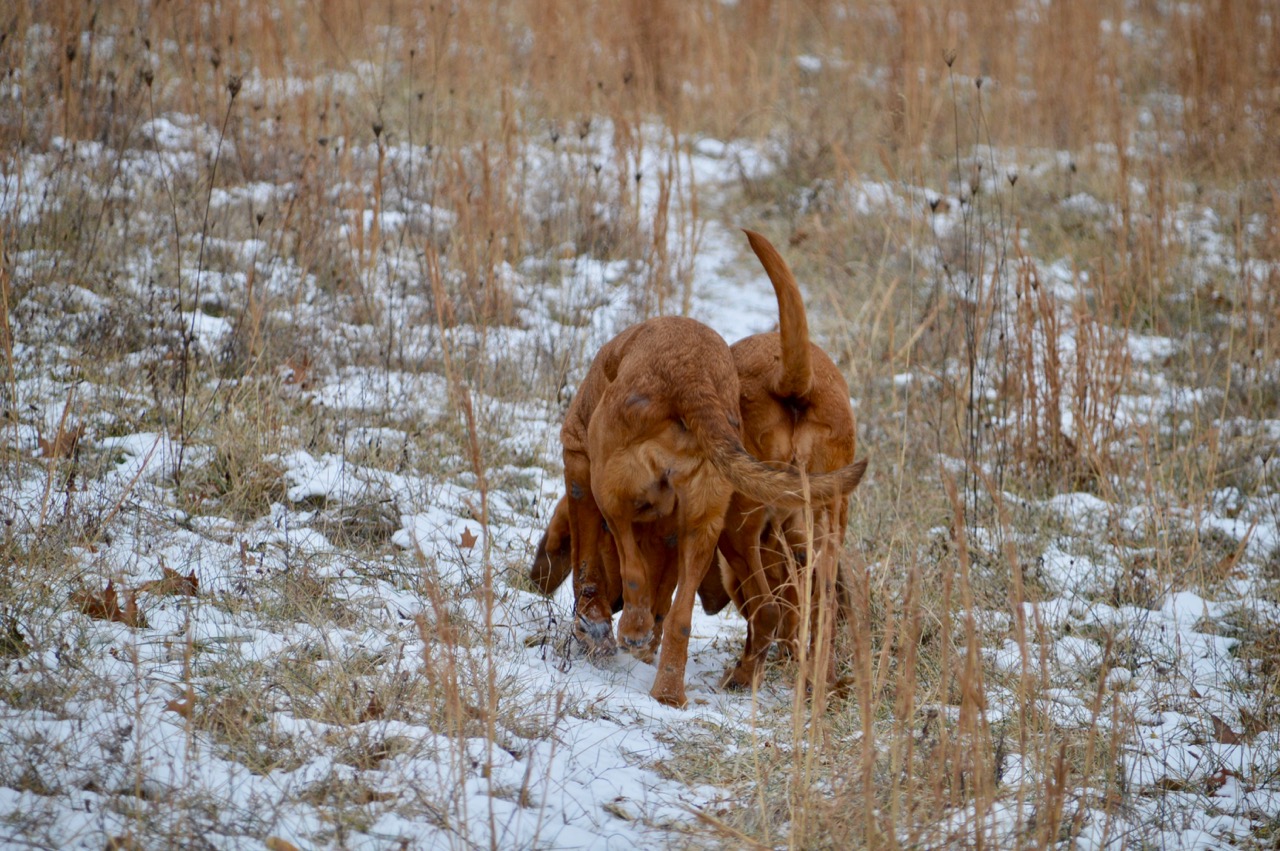 It was about this time during the walk that I realized it was Saturday instead of Sunday. I've lost track of time all week. Neither hound waited for me this morning. They followed the path to the backyard and then ran to the house to wait on me. 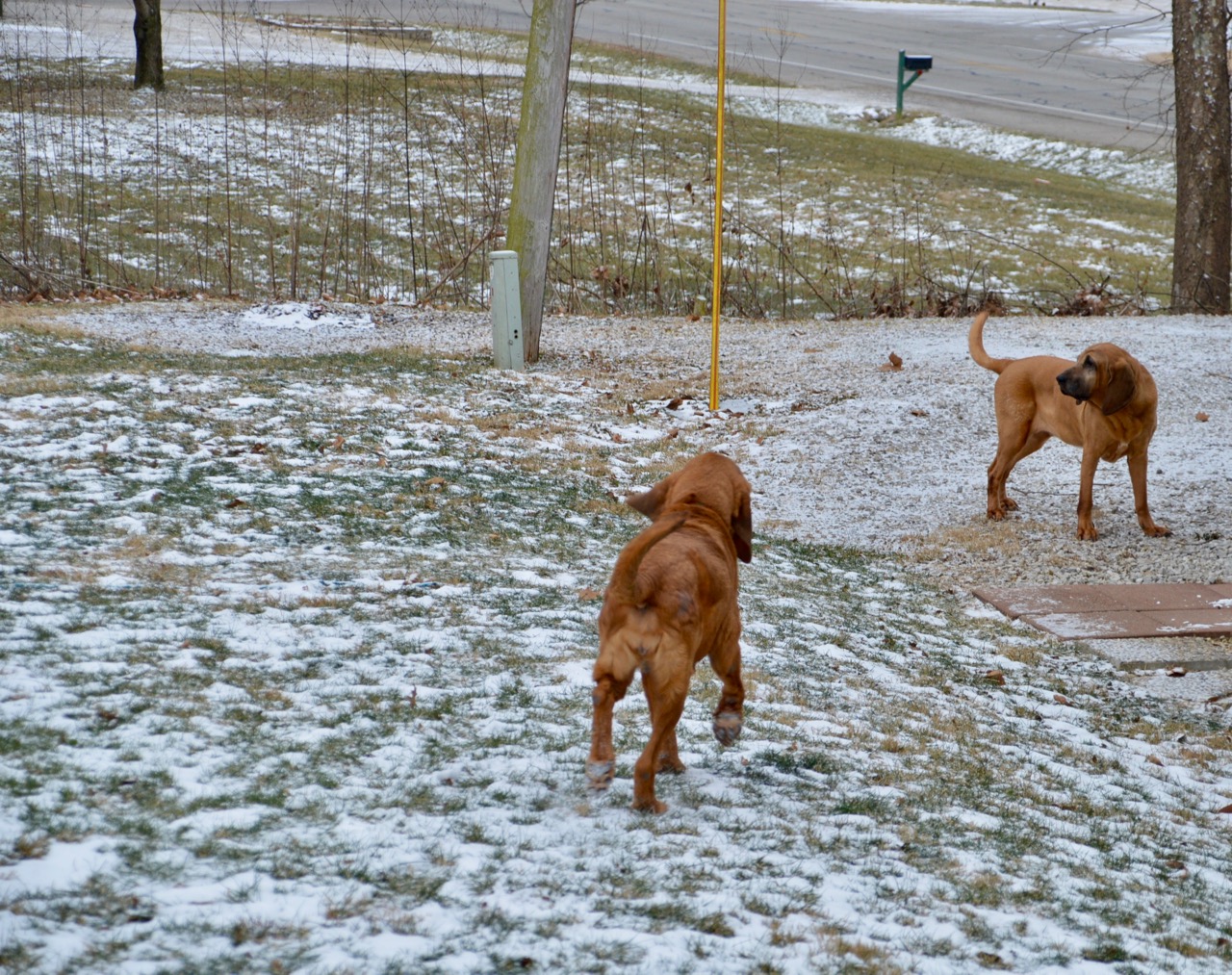 It was an interesting read over on Ara's blog this morning. He has included some quotes from two of the major developers of Facebook. Take a look for some interesting thoughts about social media and how these two men feel they may have made a big mistake in making Facebook so huge.

That word 'programmed' reminded me how I was not going to turn on my computer this morning as I poured my first cup of coffee. I wasn't going to blog and take a day off from the computer world. It rarely happens and what I say when I go to bed the night before about doing that that never happens the next morning.

I guess winter is officially here ... not because of the weather ... but because Sadie and Stella are in a full out wrestling match inside the house. Sadie is on the offense ... Heidi?? She is wrapped in her sleeping bag sleeping of course.

I have hope. The weather app says a week from Monday the high temperature will be 40°.

Hibernating again in 'the tropics' of Southern Indiana.
at December 30, 2017