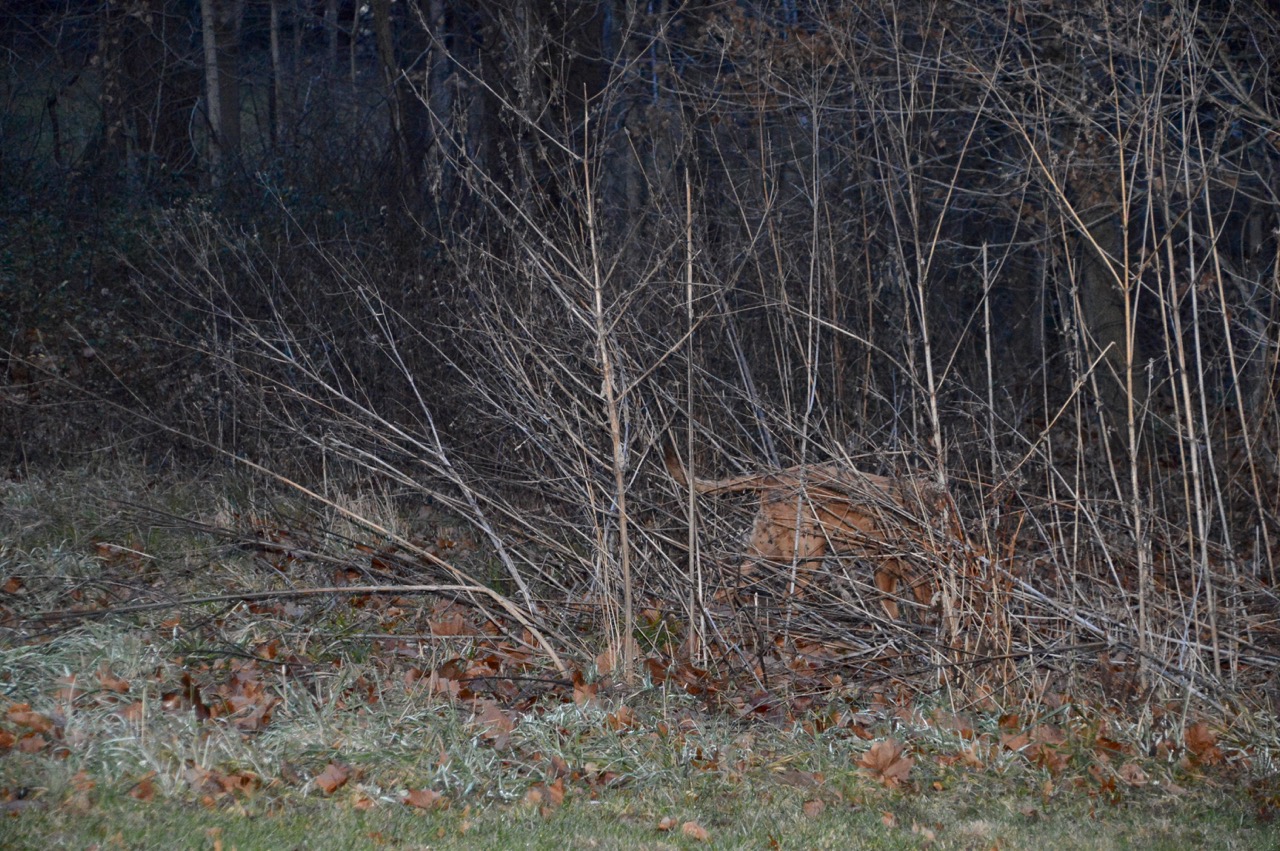 Like I said the other day, the hounds are still on Daylight Savings Time for the spring and summer. They failed to change their inner clocks in November. That means they want to take walks earlier, howl and bark for their meals earlier, then wake up earlier. Sadie was whining for her first walk of the day and it was still dark this morning. 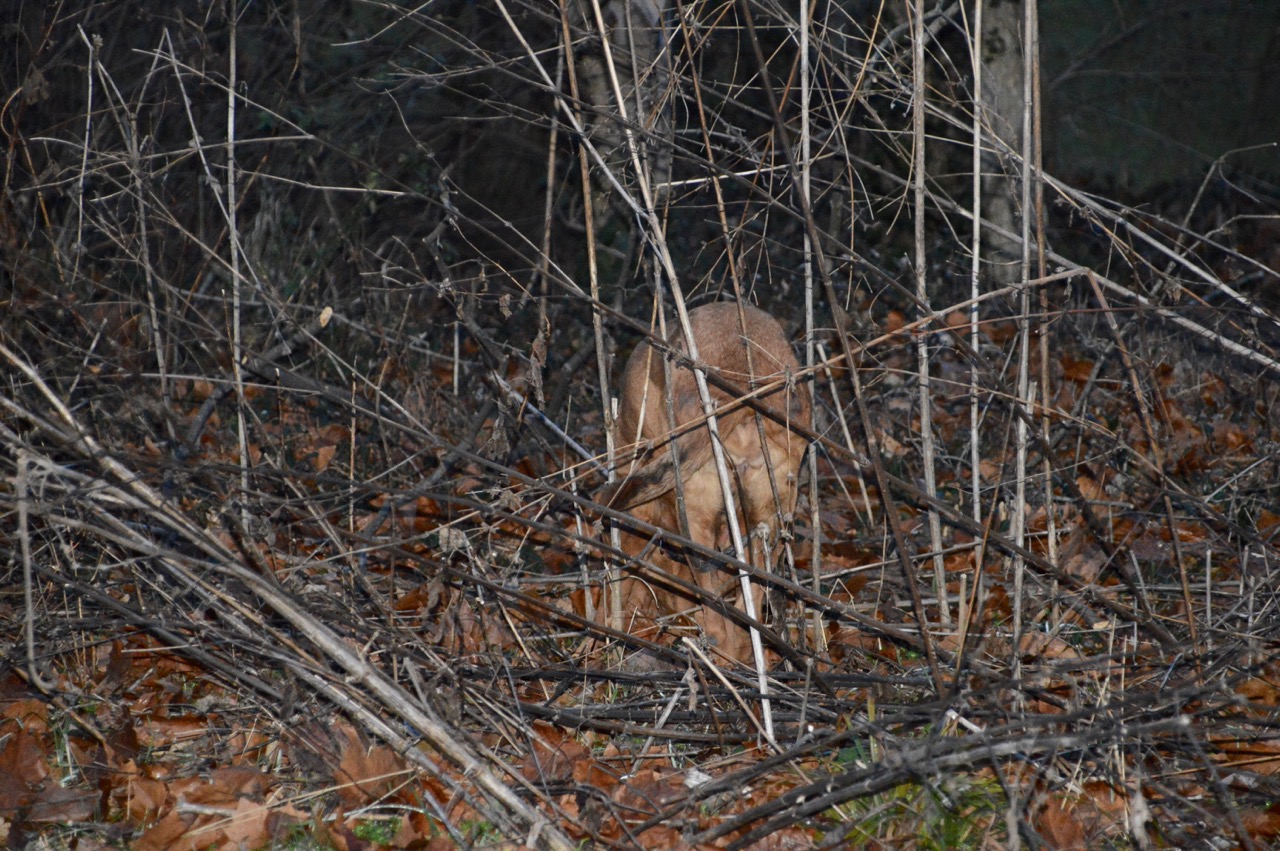 So there was no delay when the clock struck 8am. We were outside feeling quite warm in 36° taking our first walk of the day. I tried using the flash for the first few photos. That's Stella just behind the burn pile thinking there were deer in that area. I can't say if there were or not. 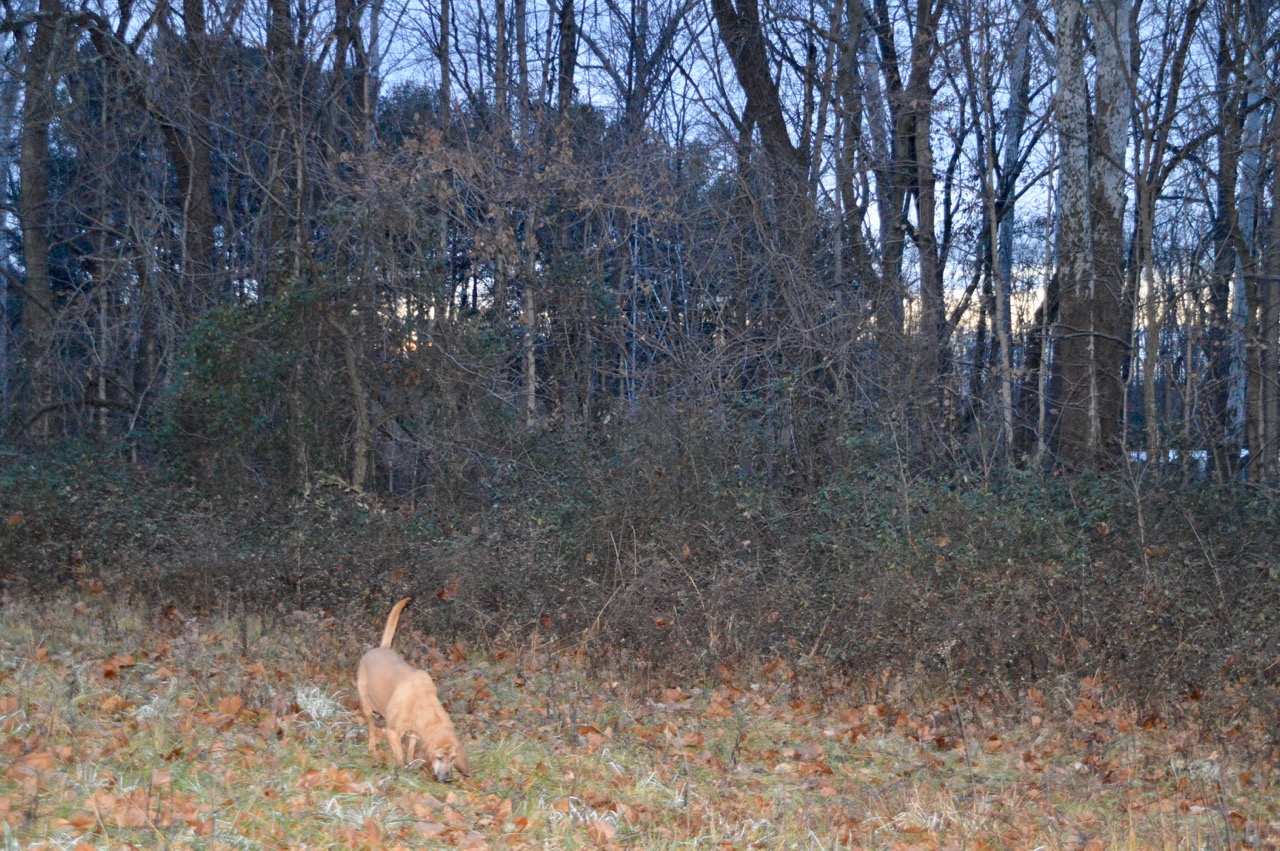 Sadie was thrilled to be outside. It was her 3rd time this morning and the day had not even started yet. You can barely see the sun rising in the background through the woods facing east. 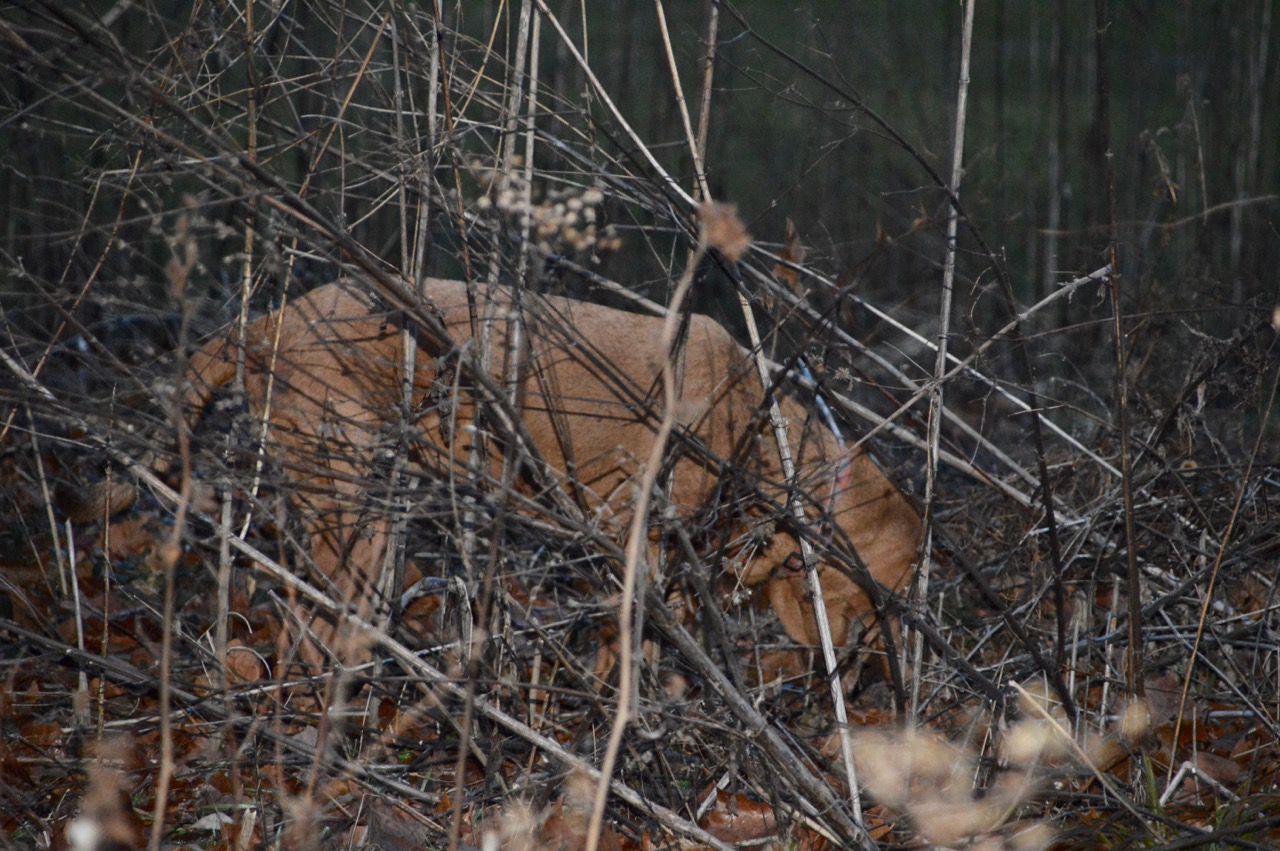 I wasn't sure if Stella was ever going to leave this area, just barely in the field and not a foot away from the backyard. I kept walking, concentrating to hold the camera still with each shot. I still ended up with a lot of blurred photos this morning that I did not post here. 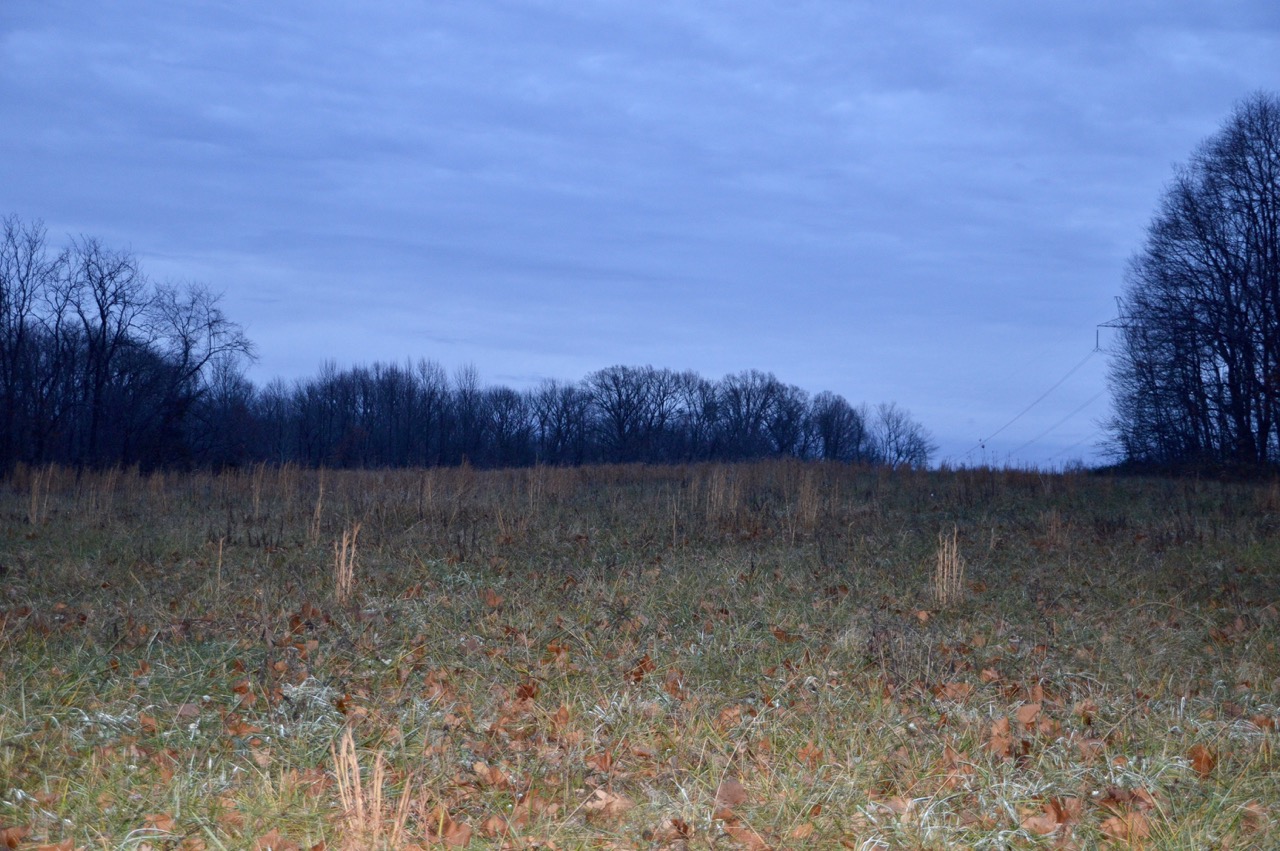 After this photo I decided to turn the flash off. It does give you some idea just how early we were outside. It is not as cold as it looks. 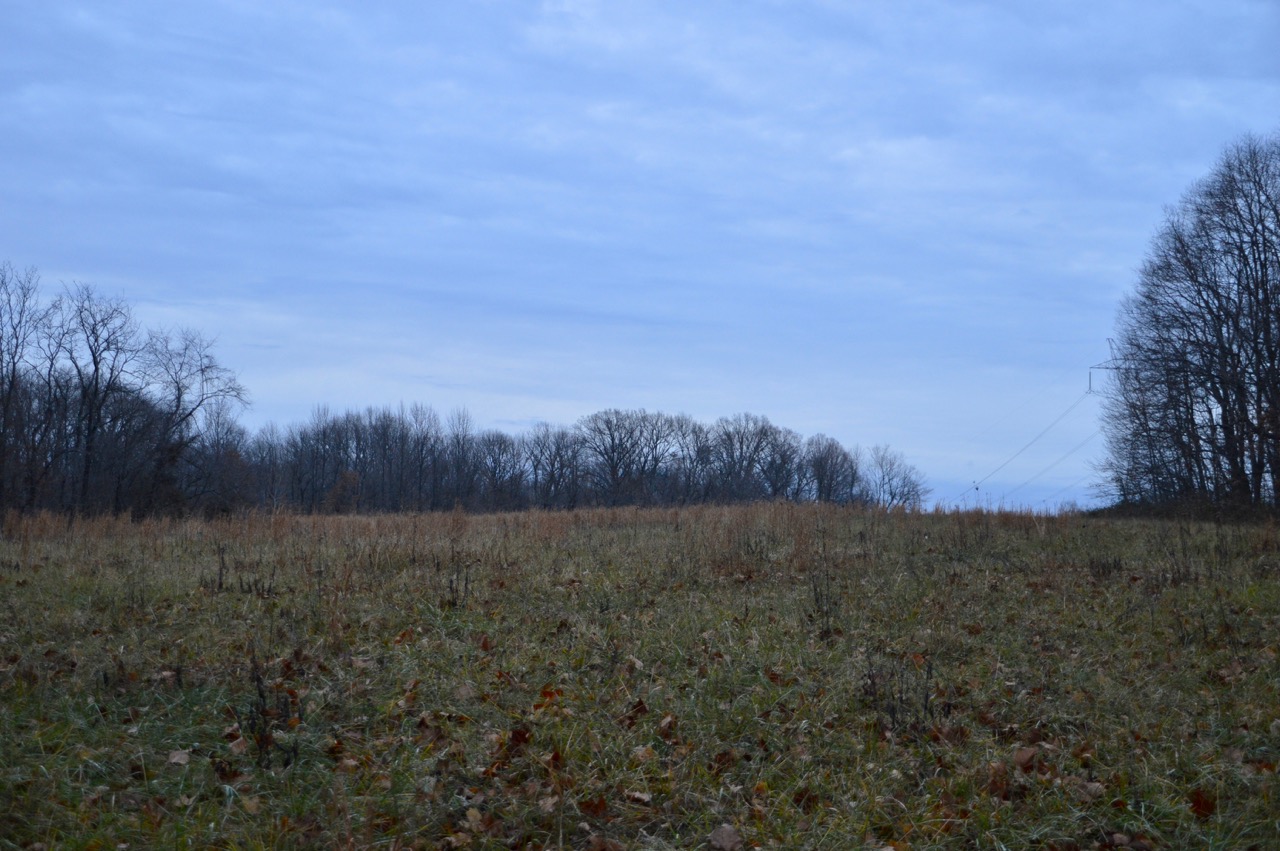 I took the same photo immediately after turning the flash off and decided it was light enough to take photos with a slower shutter speed. 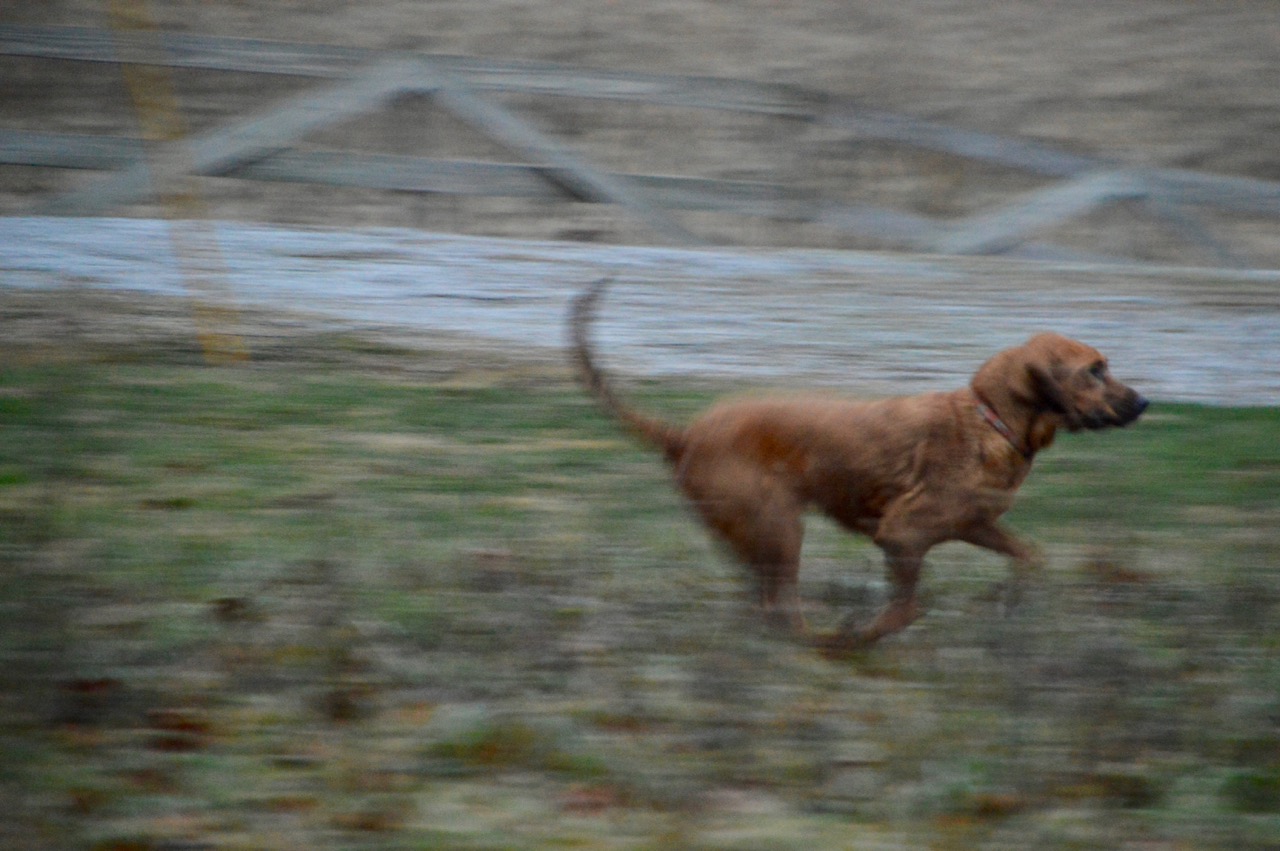 Stella decided Sadie and I were getting to far away ... zoomed in at 200mm and with her running speed it was hard to catch her before she turned the corner to sprint after us. 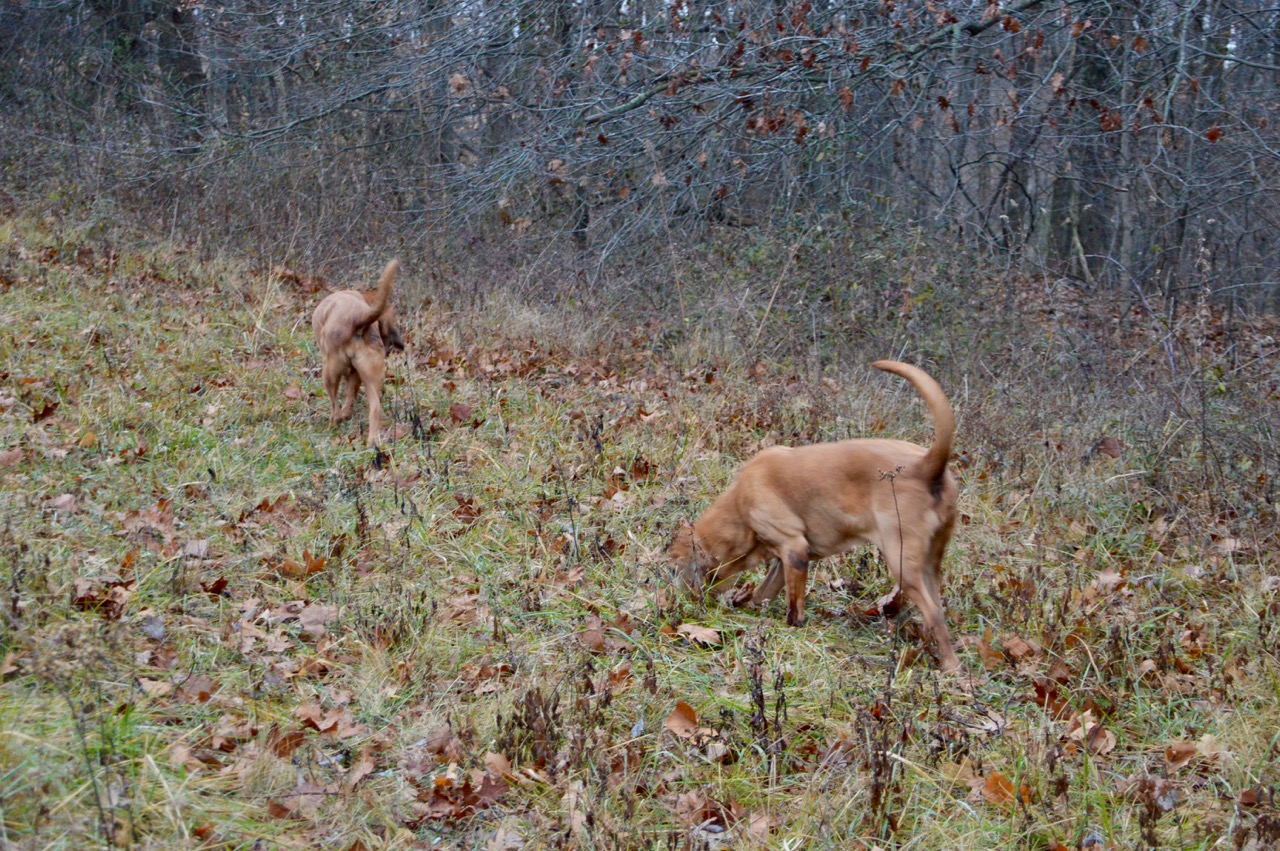 By the way both hounds were acting I assumed the deer scents were strong. I can't remember the last time we had a deer sighting on the walk but it's been a while. 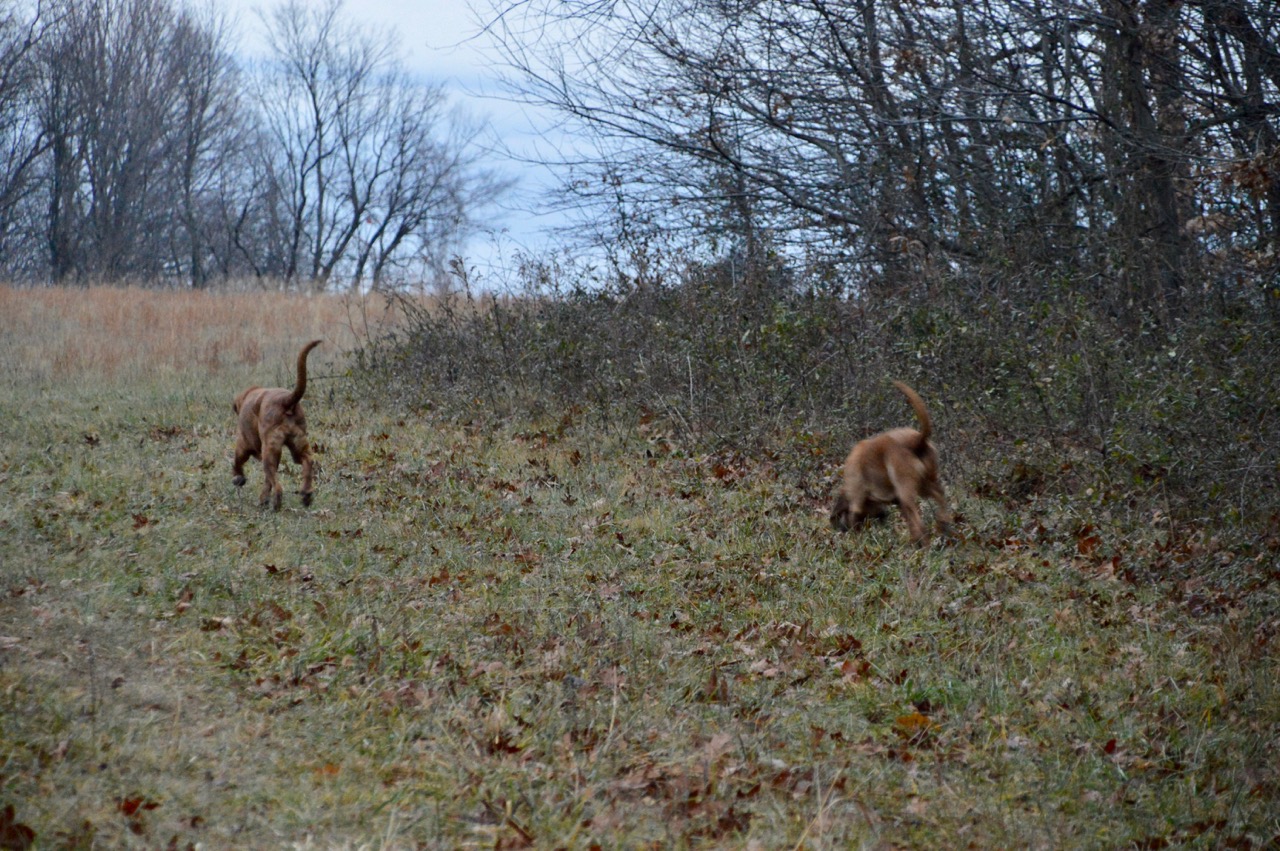 With yesterday's skies being dark and a constant drizzle, this photographer took a day off. I didn't take one photo outside nor with the iPhone. Consequently the weather pushed all of us into a deep hibernation mode with a day full of movies. I also transferred a lot of movies and ballgames from the DVR to DVD's. If I clear my older DVR player of all the saved tapes I can either upgrade to their newer model of DVR or threaten to switch to DishNetwork for some 'retainer discounts'. 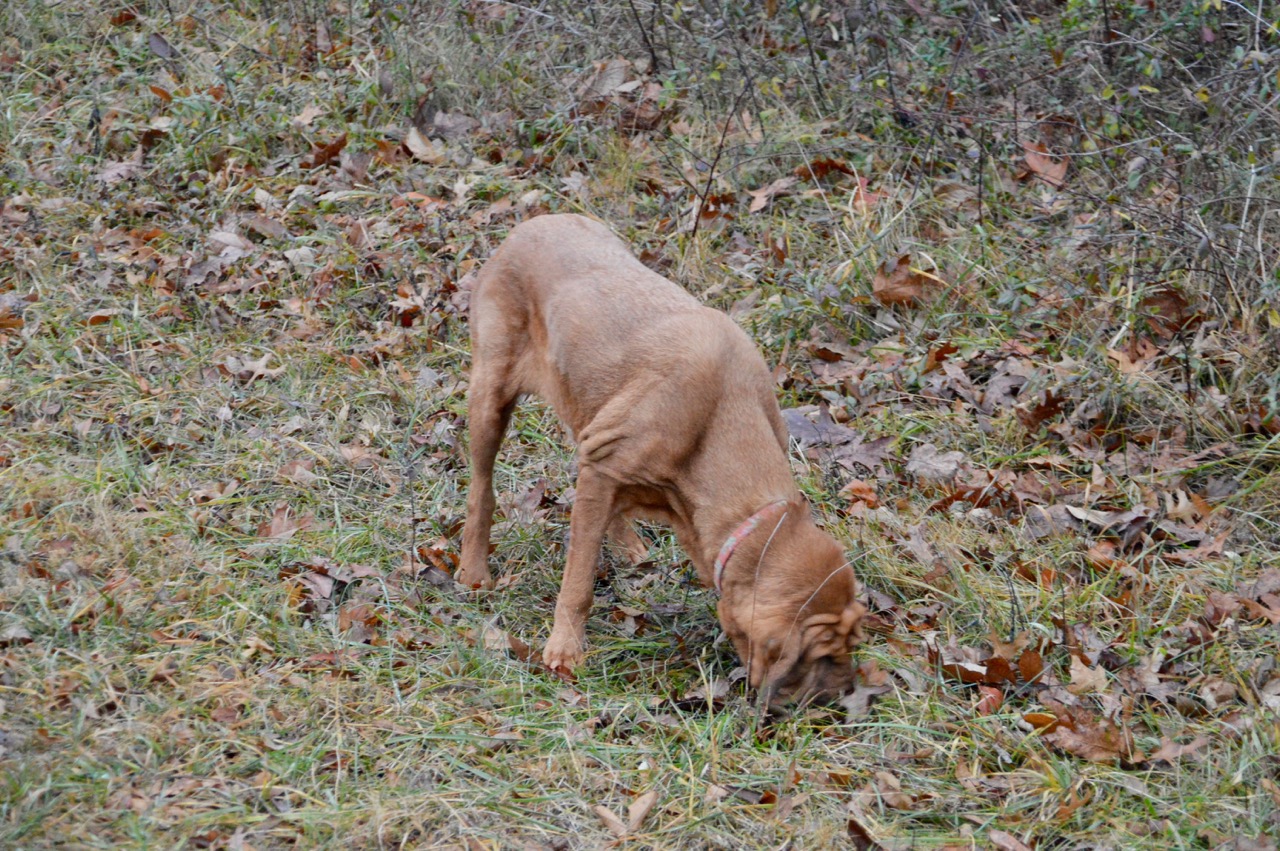 I knew Stella wasn't going to get past the first turn today. Sadie and I continued our walk and headed for the back of the field. You can see the sun is starting to rise. 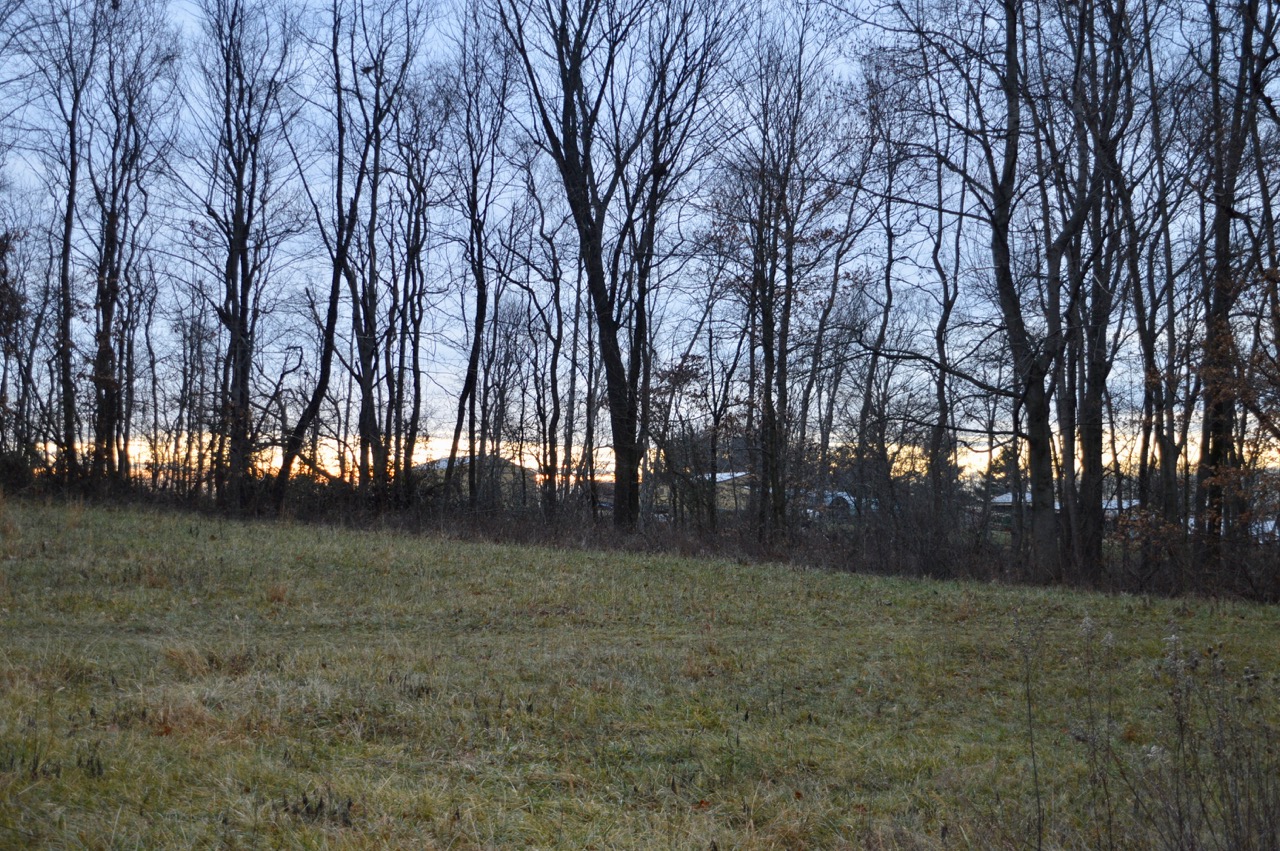 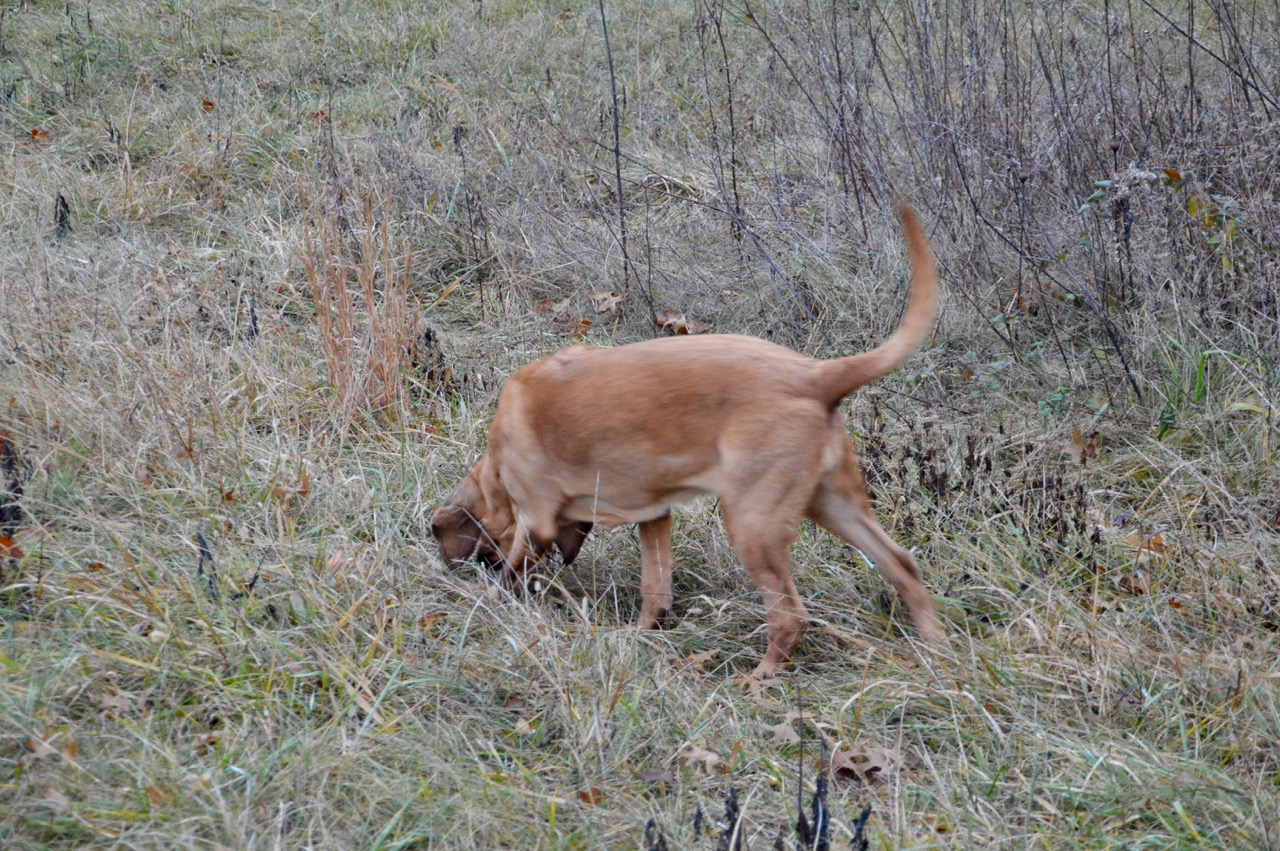 With the highway dry today I'll be taking the Z4 out for a spin. I continue to check my repairs each time I return home and find that everything I installed is still tight as new. 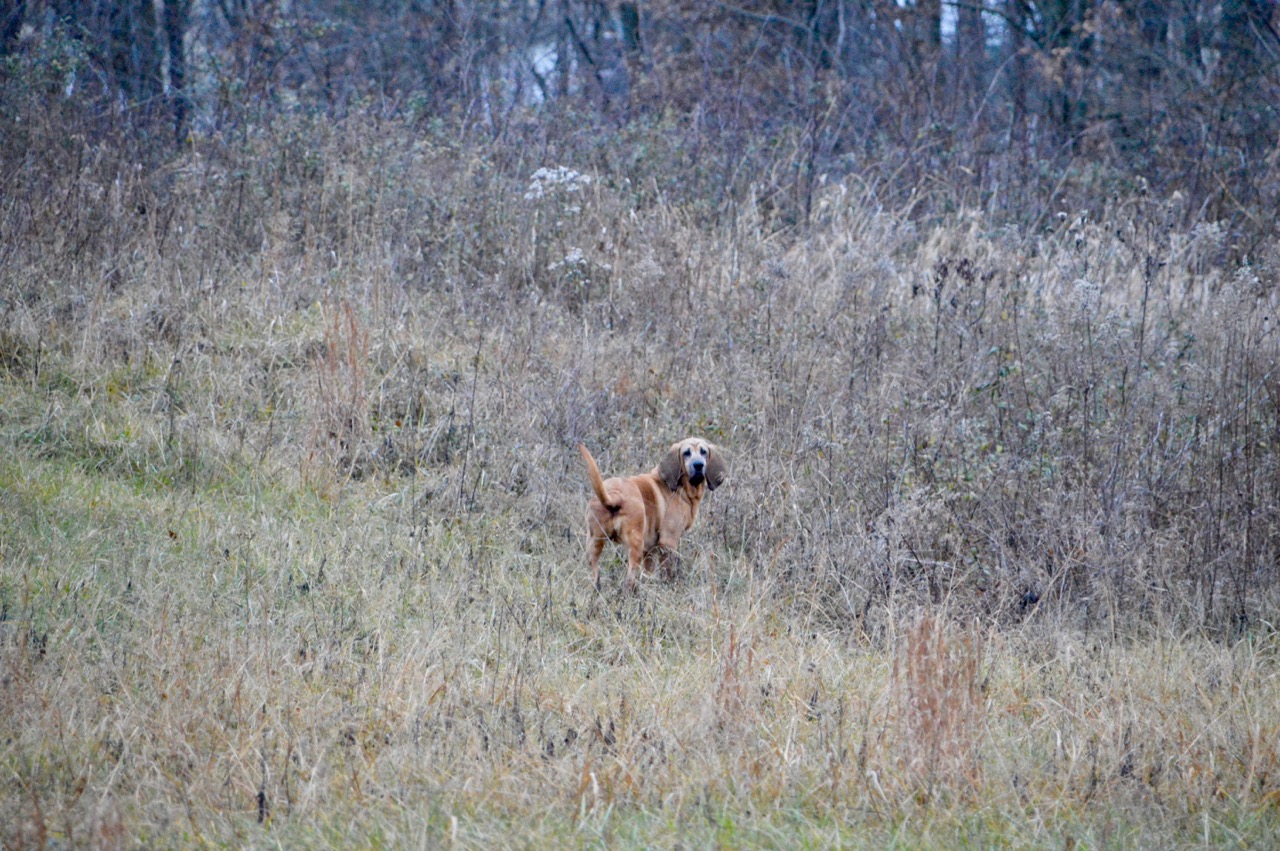 You can't really see how far away I am from Sadie but I am close to making the final turn home. 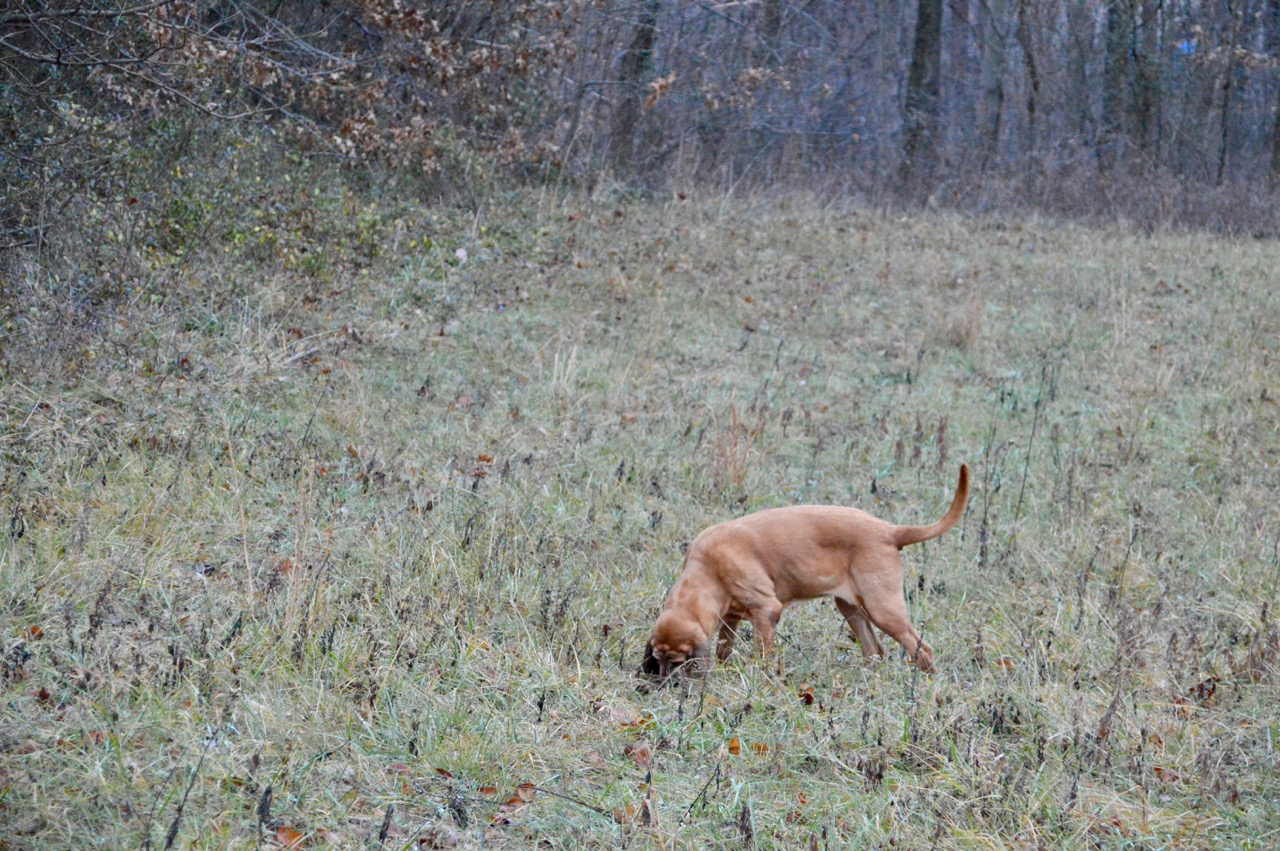 All of the photos of her sprinting to the back of the field were again, blurry. I can't remember having this much trouble as I have had recently. Of course it's dark and with the slower shutter speed I have to keep the camera steady on the hounds longer which is the perfect condition for operator error. 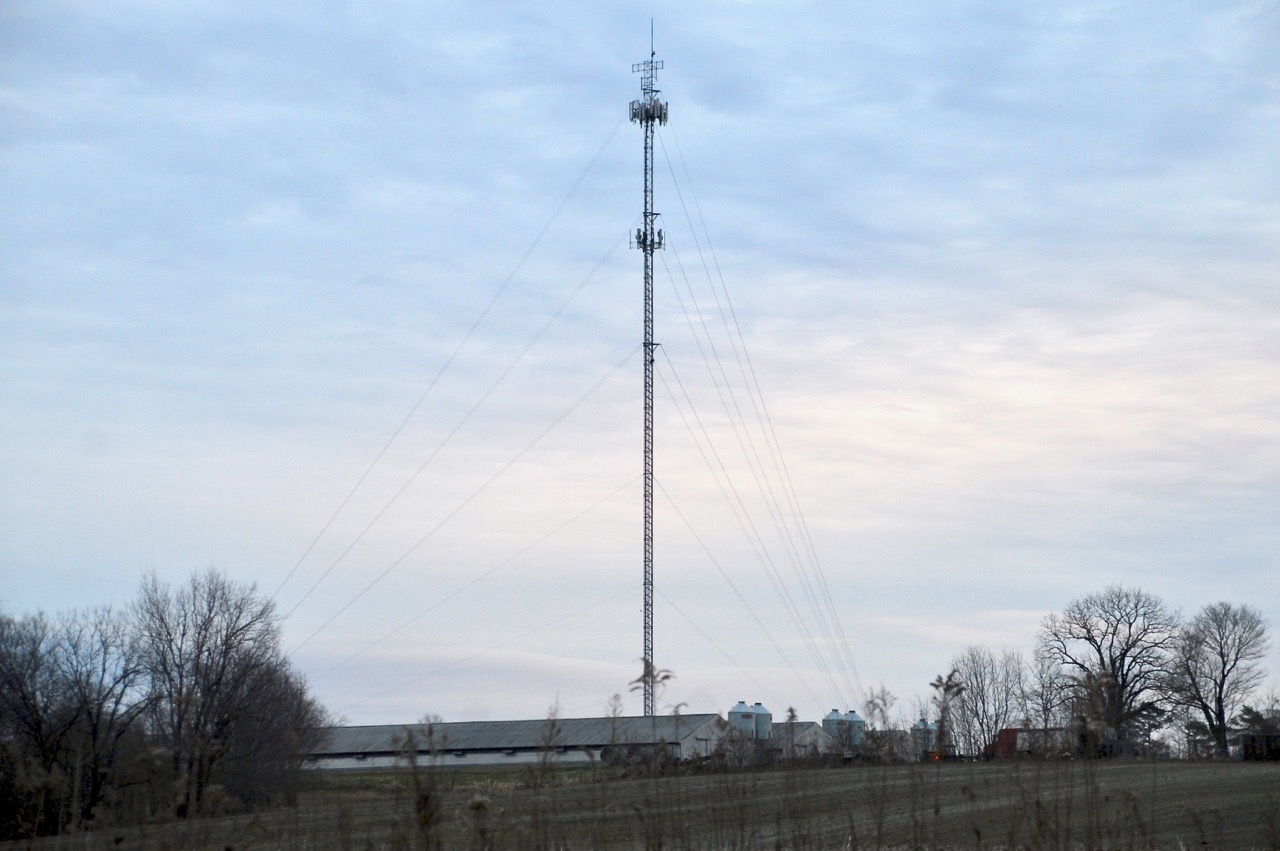 This was my test today. I had the tower lined up with the three vertical marks inside my viewfinder. By the time this photo reached the editing room, I had to straighten it 2°. 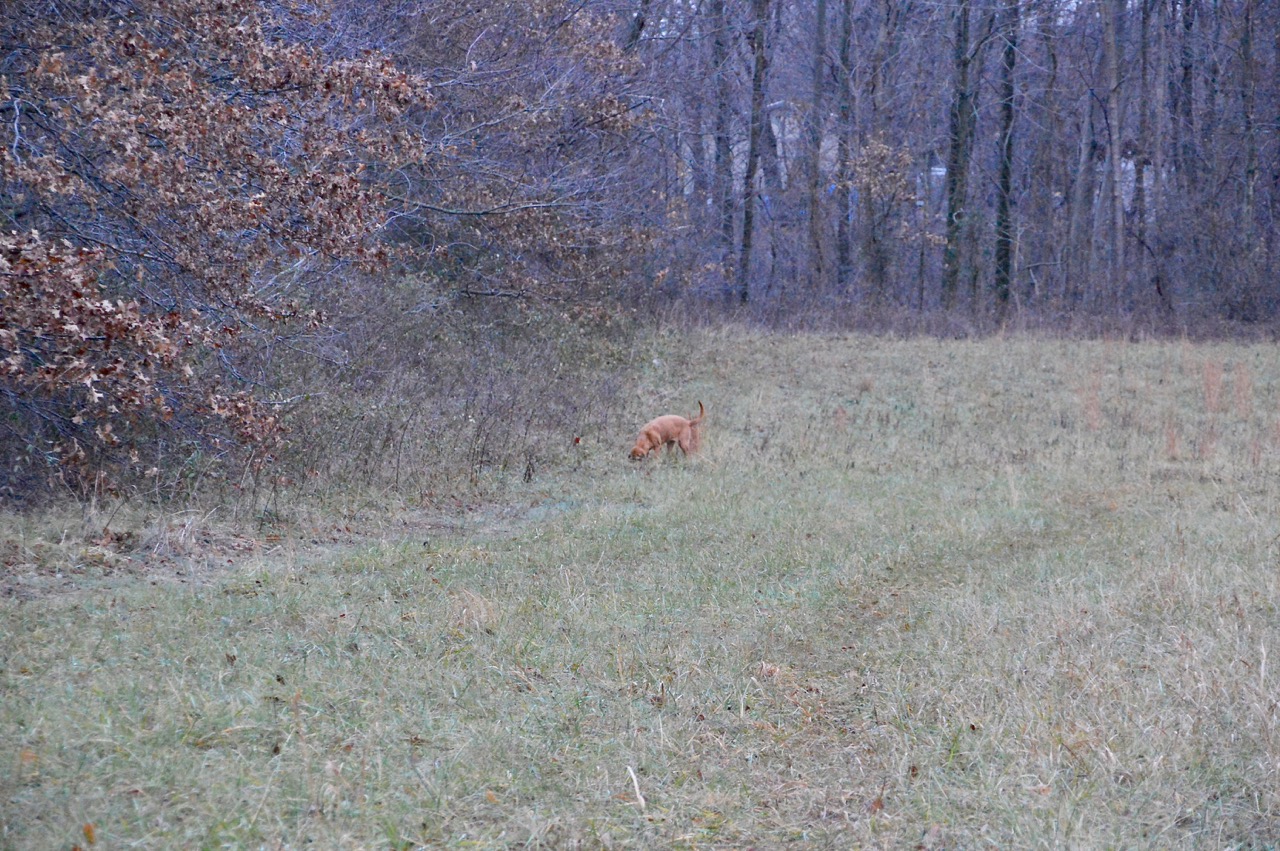 Sadie also hung back more than she normally does. Unlike Stella, 99.9% of the time she will come running to catch me without me ever saying a word. I remember once last summer where that .1% occurred and I had to go back out to find her after 35-40 minutes. 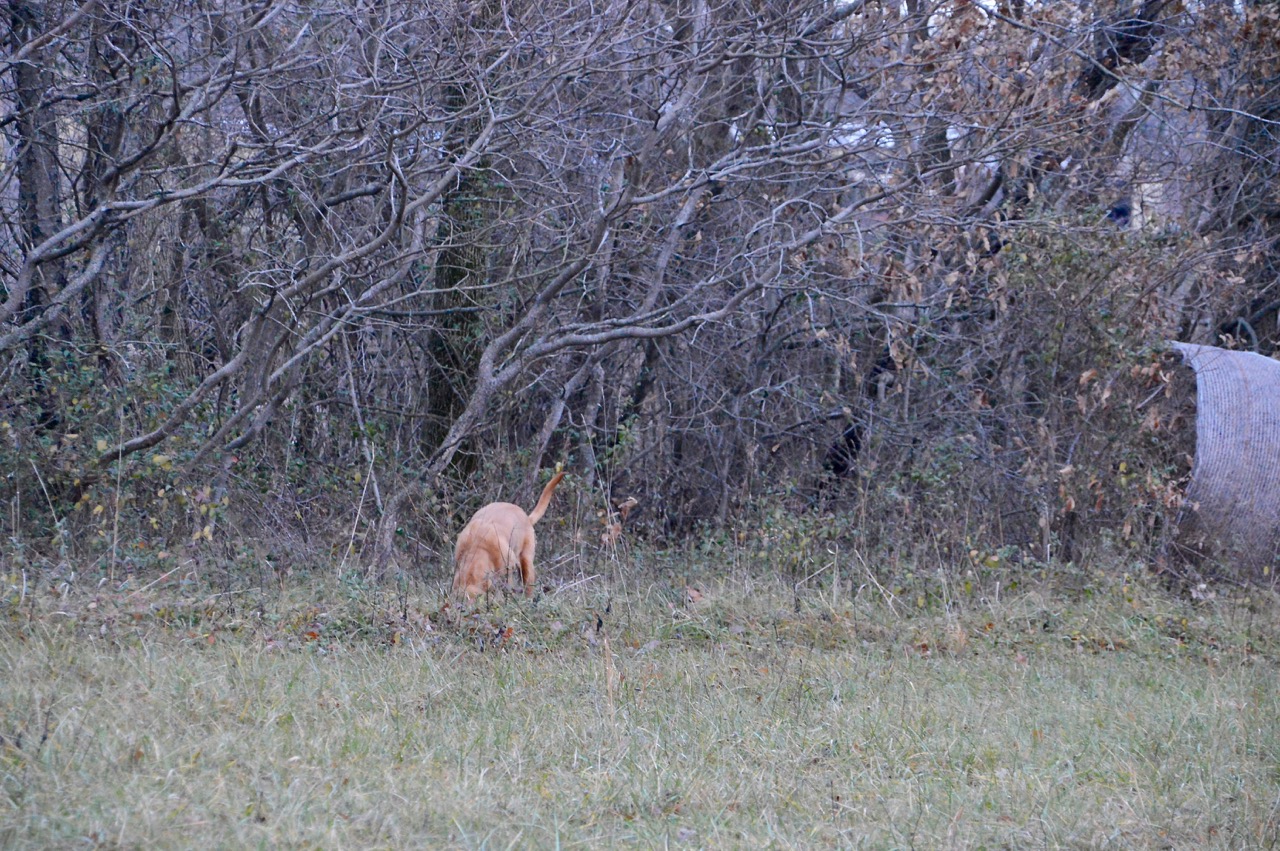 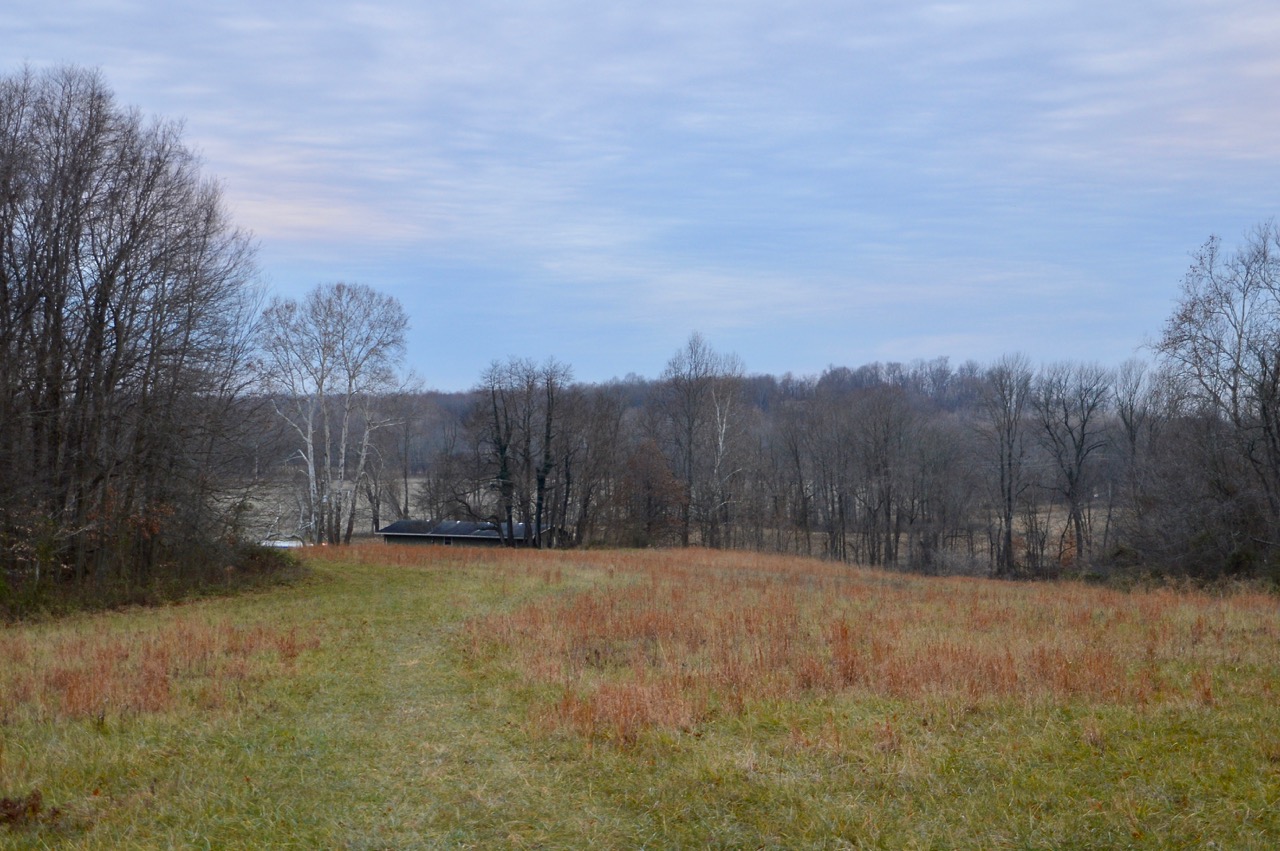 It's hard to believe it's 5 days till Christmas. Last night on the local weather, they said it had not snowed on Christmas here since 2010. It looks like we will only have cold temperatures for the holidays with Saturday spitting out some rain/snow showers that will barely amount to a 1/4 inch. 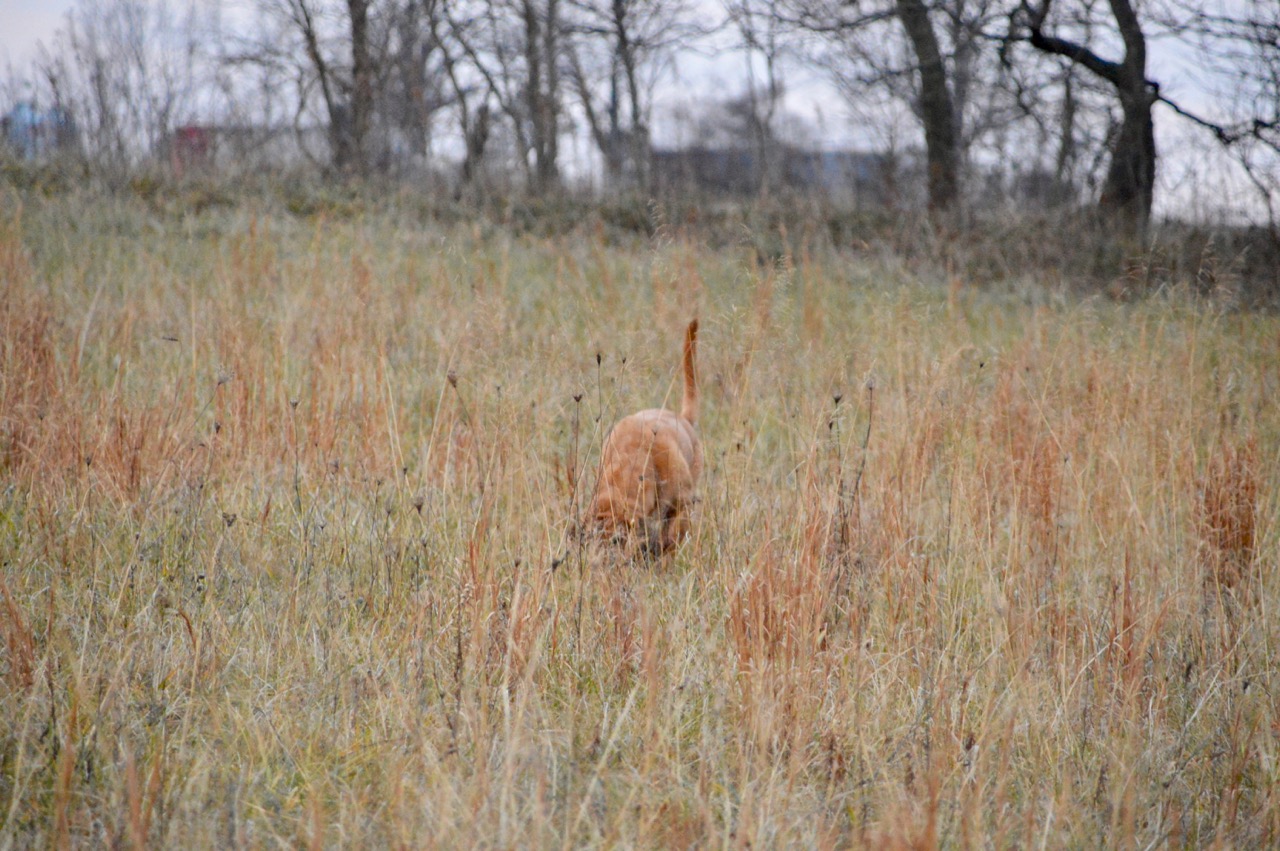 I have printed out my College Football Bowl tv schedule. Counting last night there are 13 straight days and nights of college football games, except for Christmas Eve and New Year's Eve. Add in the NFL games and college basketball games, all 15 of my tv sports channels will get a good workout the next few weeks. 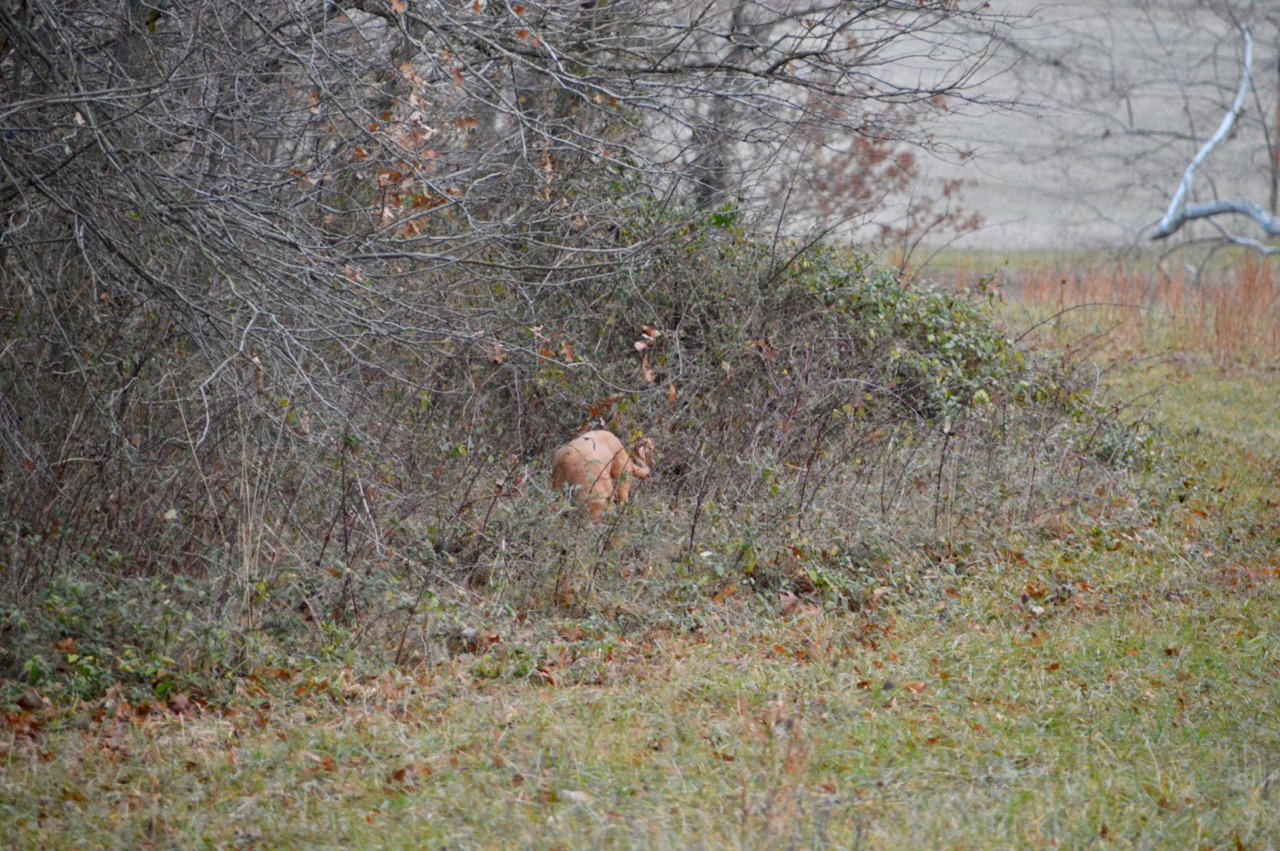 Without glasses, at times it's hard for me to find Stella from a distance. The camera lens set at 200mm helps me do that. Today I saw she had not moved 10' from the last time I saw her this morning. In the spring, summer and fall that area she is standing in is solid overgrown brush full of sharp thorns. 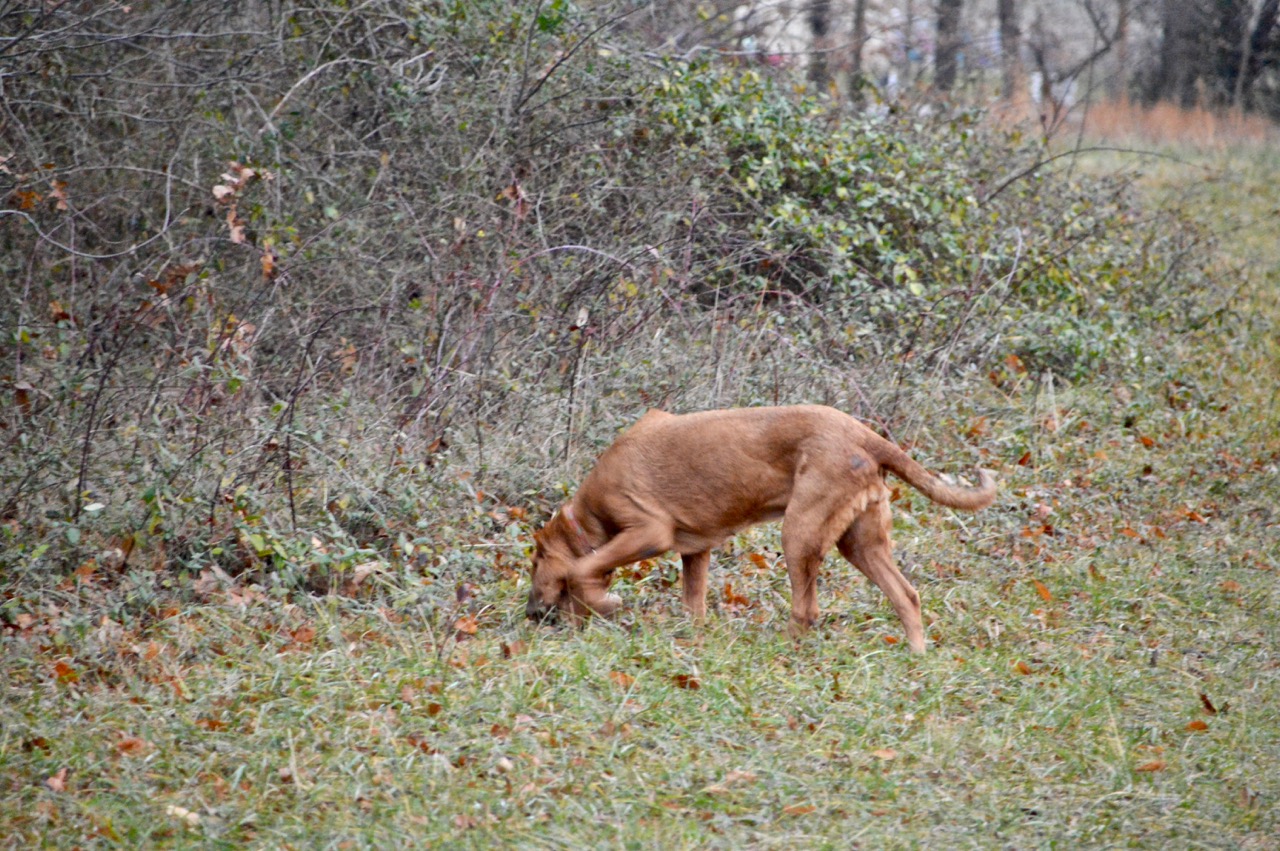 Once she heard me call her name she stepped out like she was going to meet me but had to turn around one final time before heading home. 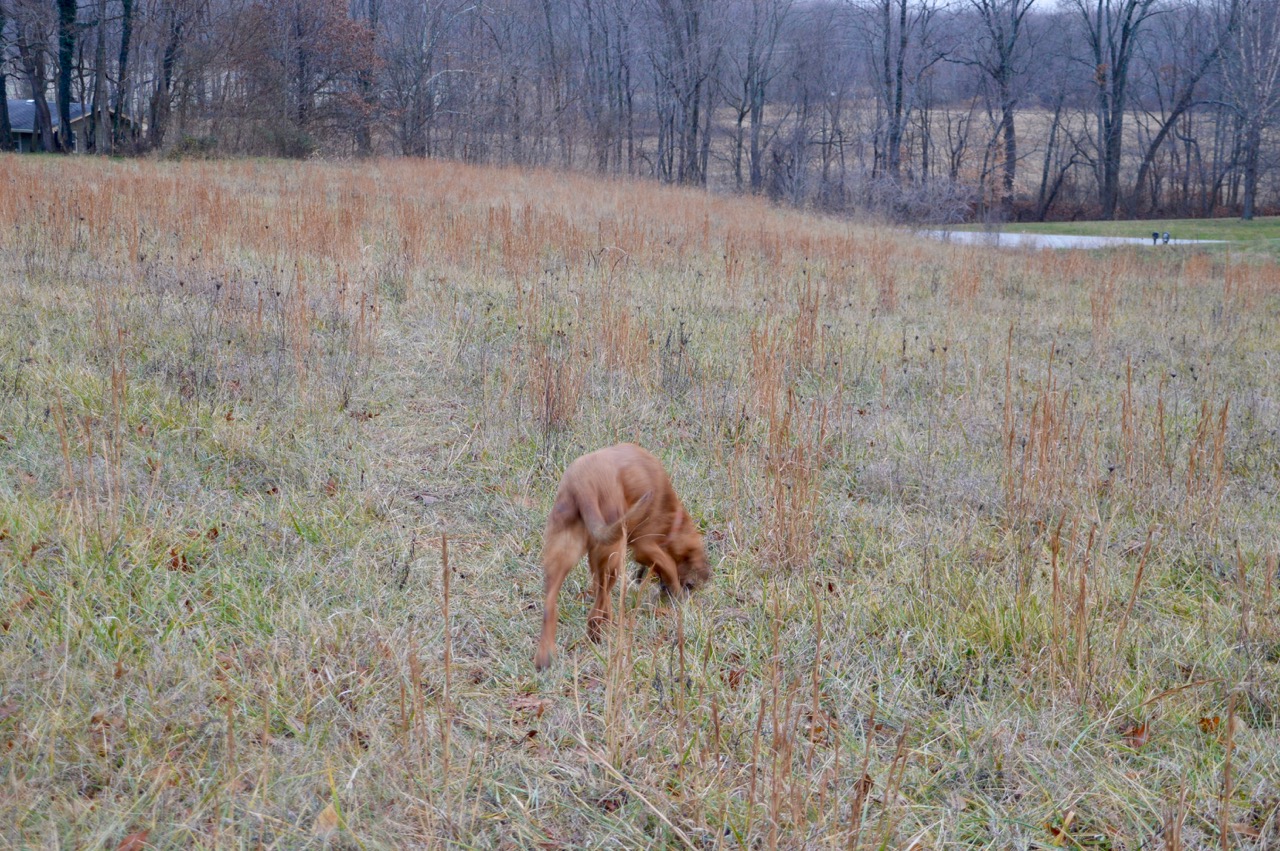 She chose the 'alternate' path so that is the one we took. It wasn't going to be a fast trip though. The house might be in view but this part of the walk from here to the backyard may take almost as much time to cover as the distance we have walked up to this point. 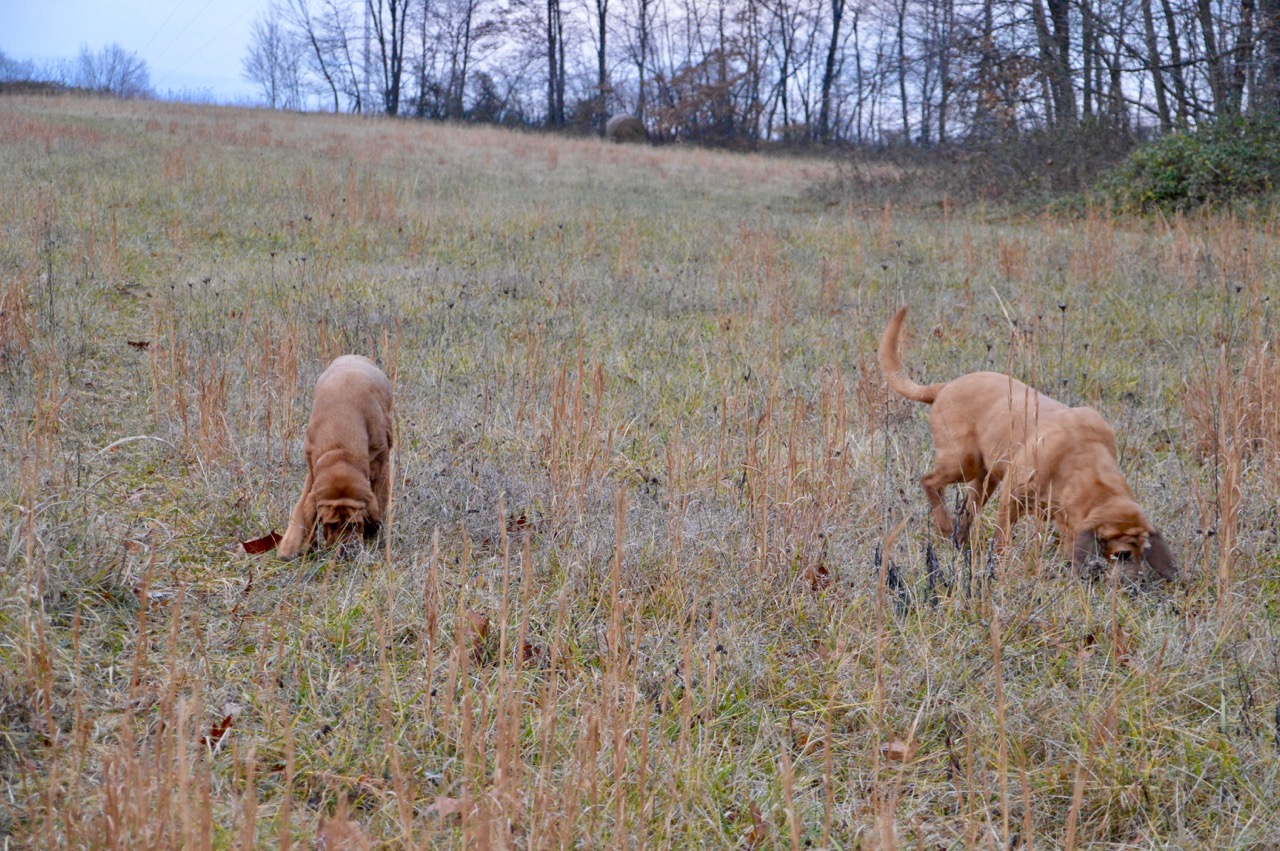 It's because they do a lot of this. Deer and cat scent must be identified for them to be happy ... moving slowly inches at a time. 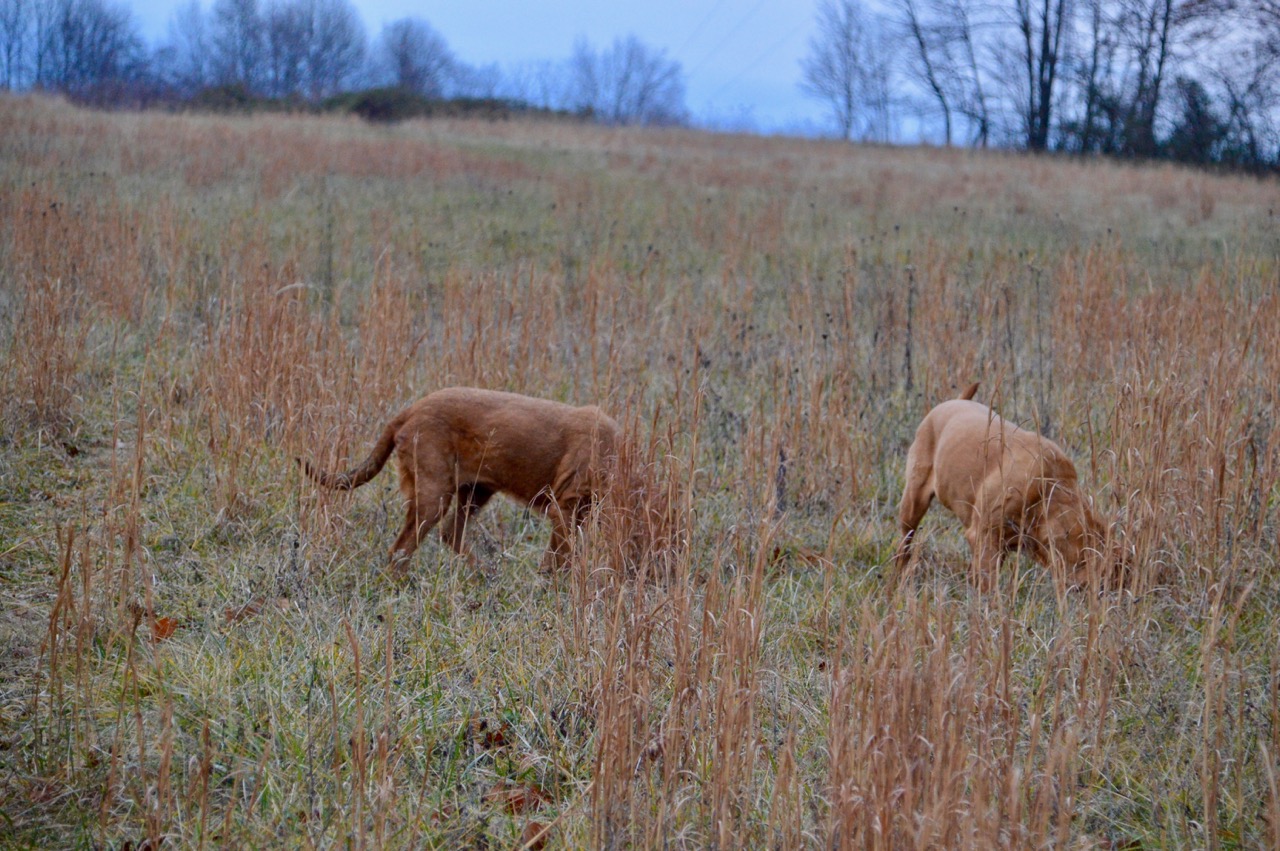 There are times I think I might have time to leave them where they are, go inside and grab a cup of coffee, then come back to watch them. I am pretty sure though if that were to happen, I'd find Stella over by the neighbor's woods or yard. She knows when I am not around, and she never hesitates to expand her horizons.

Without any wind today it will be a good day to get outside this afternoon to pick up more of the small tree limbs that have blown into the yard. I'll try to get Heidi outside for longer than 5 minutes and take some photos. I might have a blog post later today with just photos of the afternoon.

After that Z4 drive, maybe during, I'll be heading to the store to buy all the ingredients I need to make chocolate and peanut butter fudge. The urge to have some of that was so strong last night that I almost made a late night run to the store. The urge has not gone away so far this morning, so it's a requirement now.

Doing very little in 'the tropics' of Southern Indiana is a good thing.
at December 20, 2017