The Hounds Are Back After A Day Off 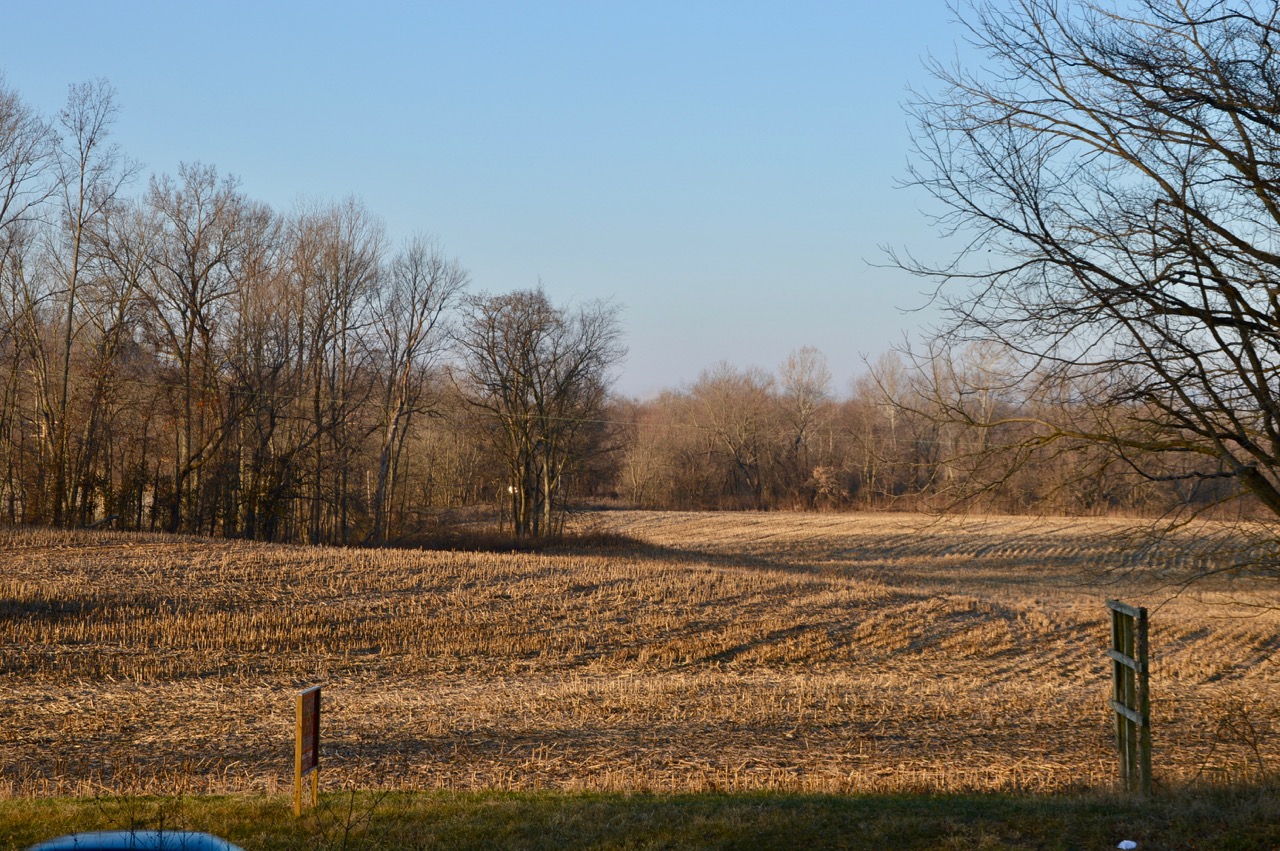 That glimmer of sunshine this morning proved to me that yesterday's post was missing not because of writer's block but overcast skies. It has been hard to come up with words lately, so yesterday after I deleted what I has written and saved, I just thought it was because of lack of words. It was the sunshine or lack thereof. 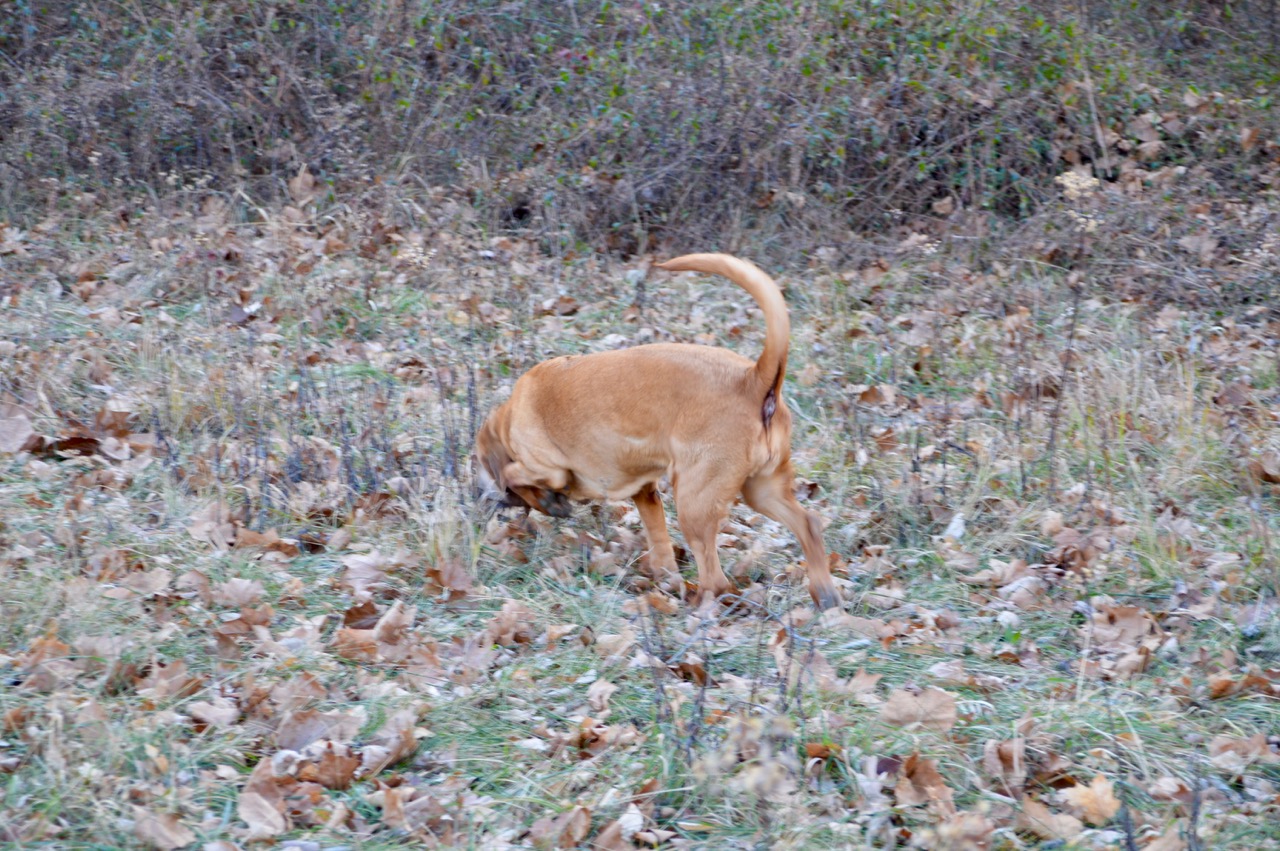 Neither type of sky bothers any of the hounds. Sadie is always ready to go for a walk, no matter what time of day or night. She hears that word and she immediately starts hopping up and down and making a noise somewhere in between a bark and a pant.

Stella's nose is nudging the round door knob trying to get it to open while Heidi is buried deep inside her winter sleeping bag. Why a sleeping bag?  I've noticed she doesn't have any kind of skin rash sleeping on the sleeping bag compared to wool blankets. 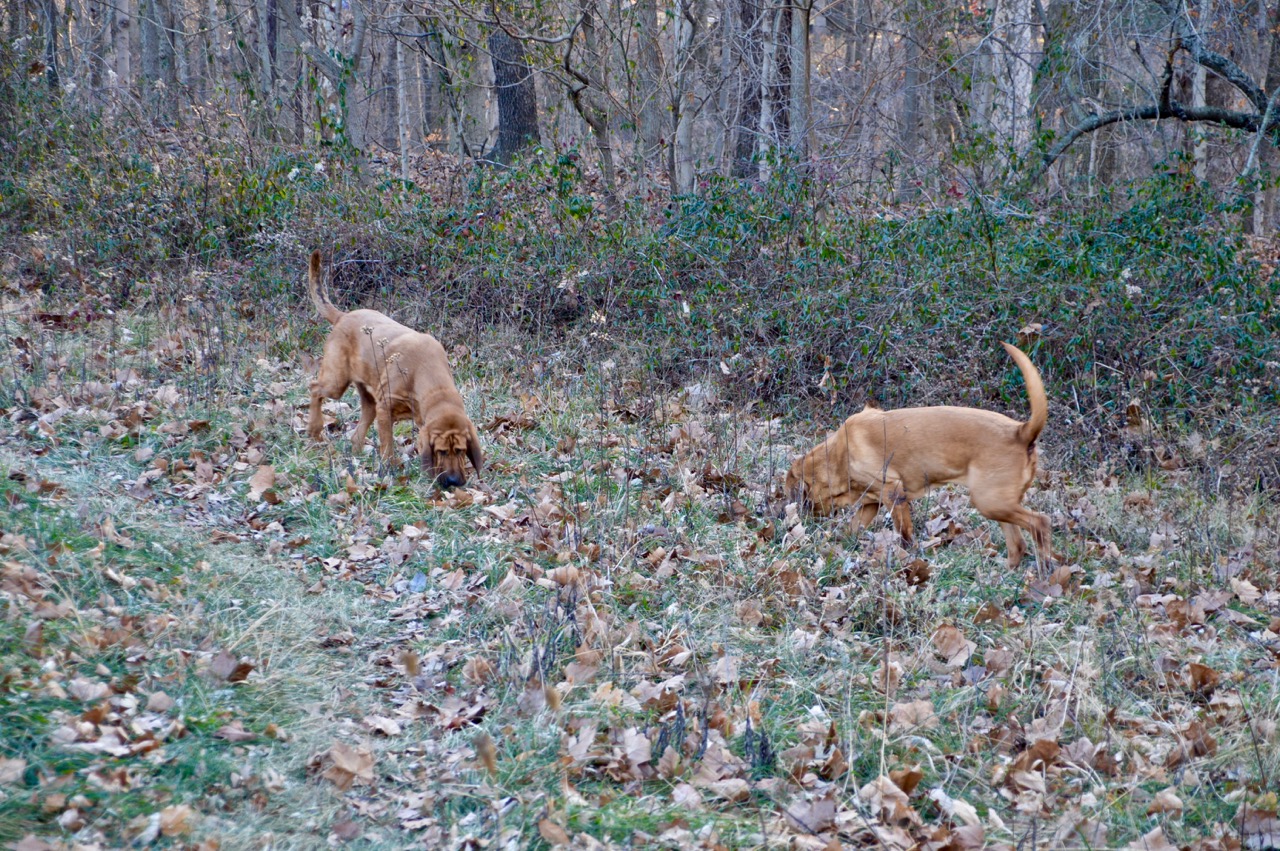 Unlike yesterday where I let Stella hang back, this morning she ran past me to catch up with Sadie. Maybe the sunshine makes her feel different also. 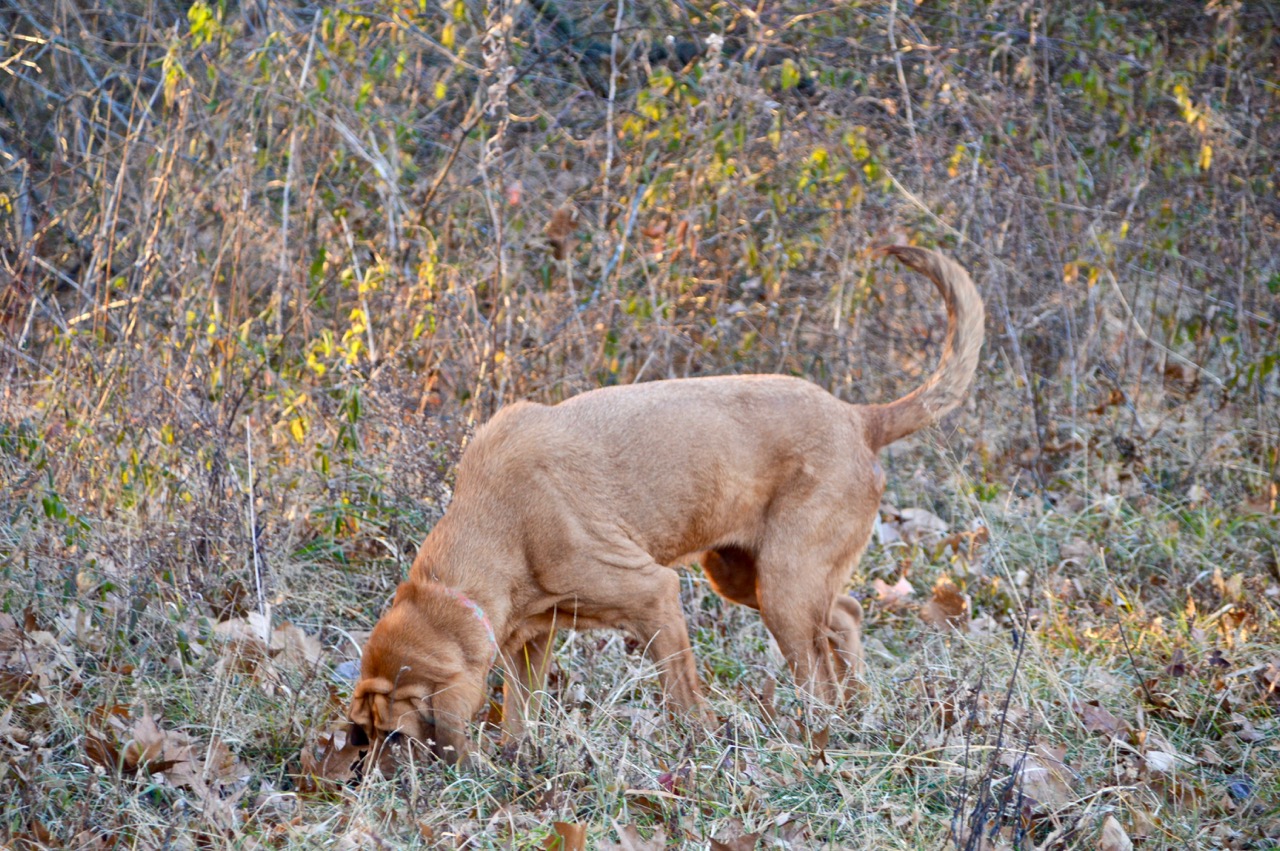 There is still enough stuff to investigate whether you stay behind or lead the walk. 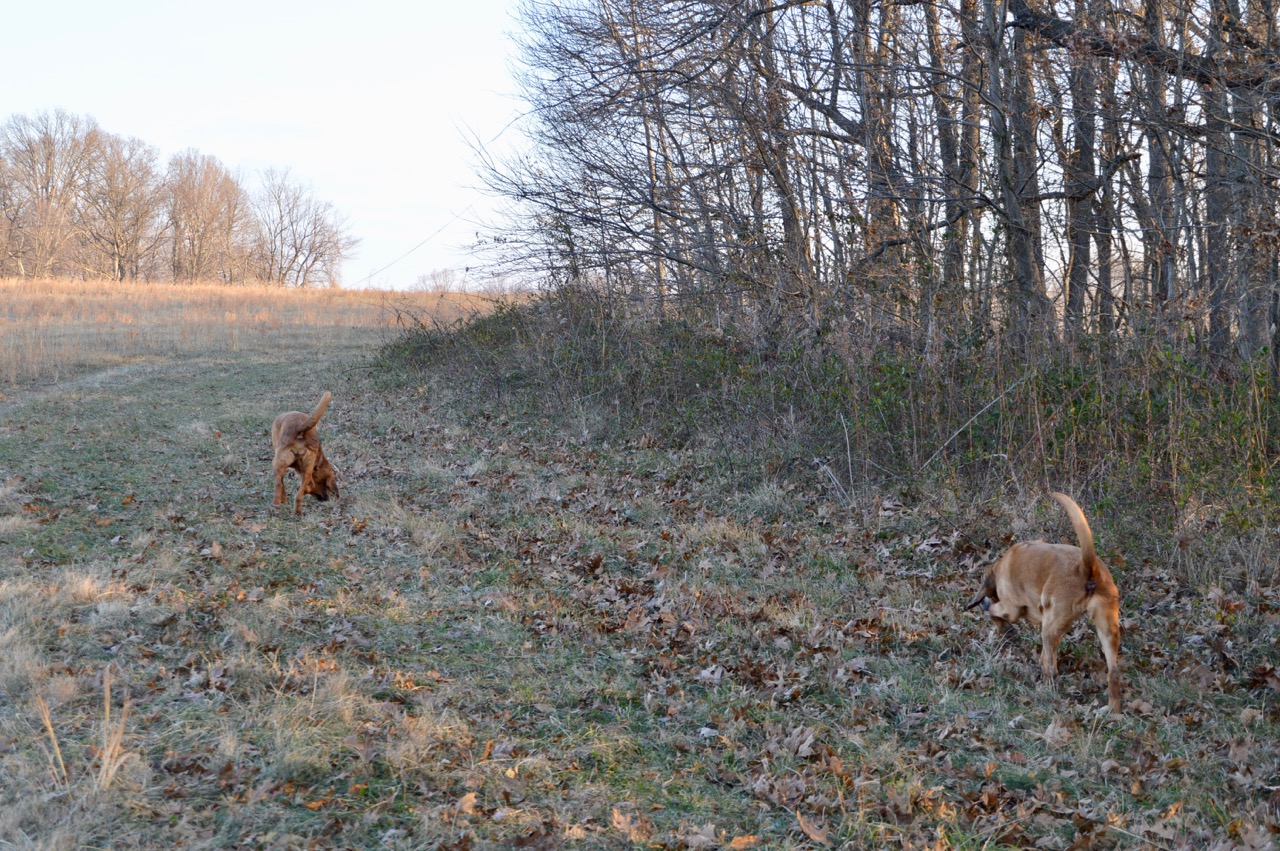 Again it's nice there is no wind. That makes the temps much warmer, tolerable and the only thing different in the walks from six months ago is the amount of clothing worn. 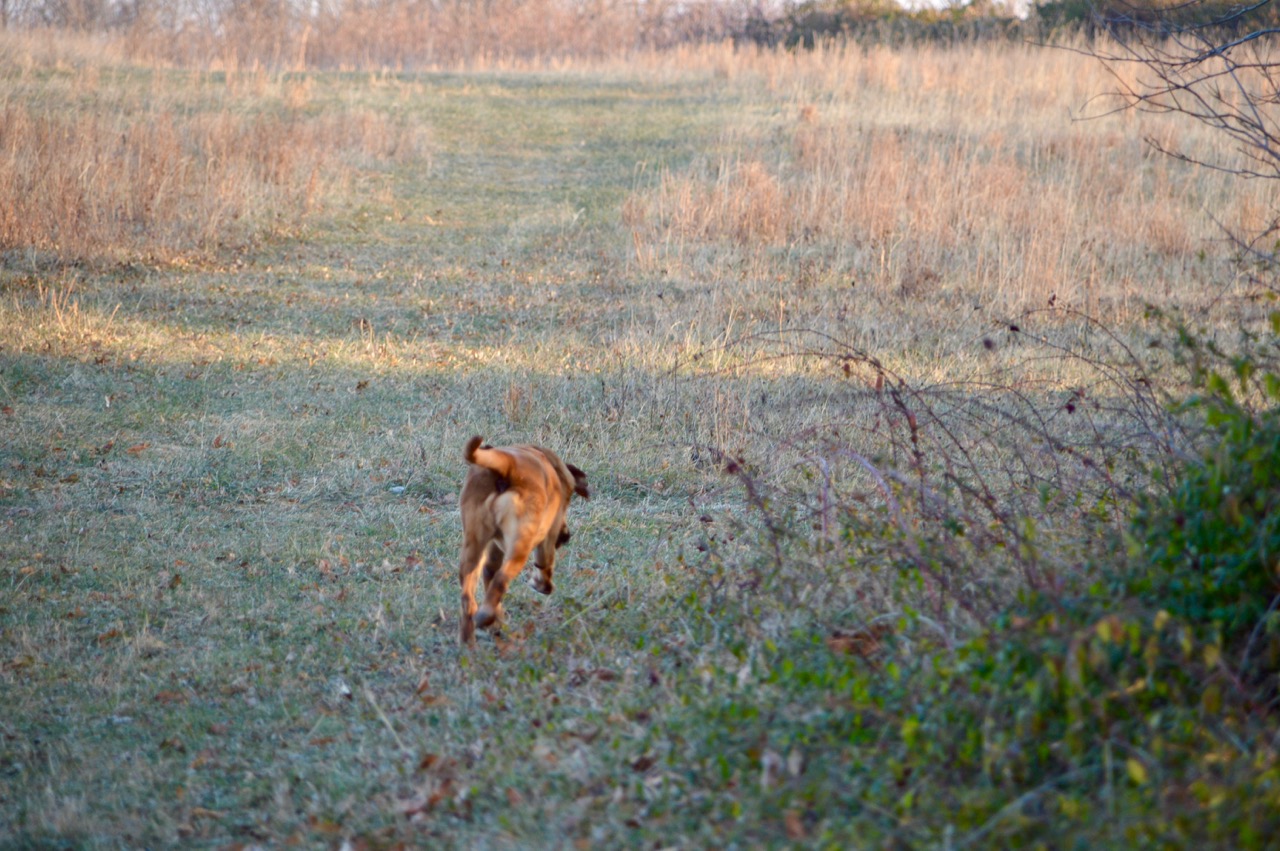 No signs of deer in quite a while but Sadie always seems to sprint around the first turn as if there were. 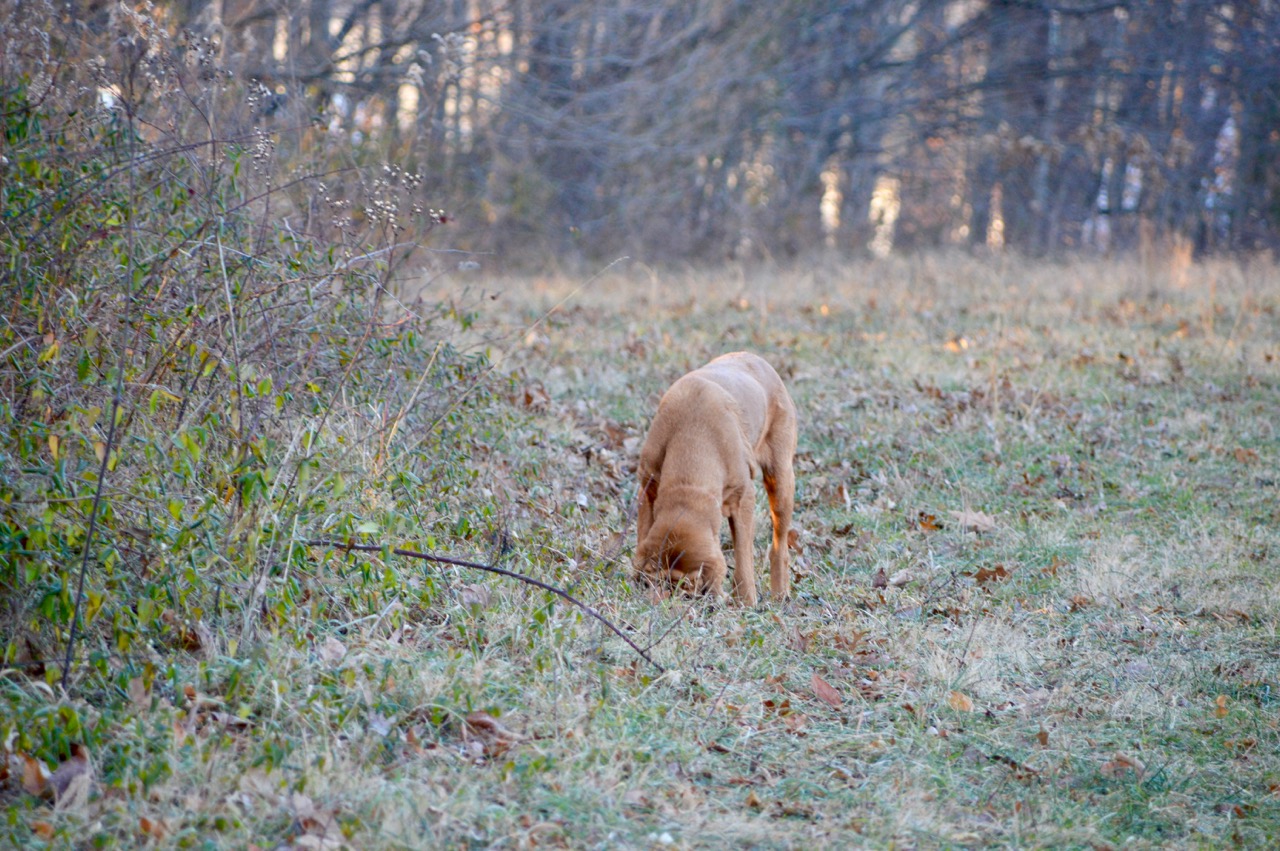 If I can get Stella to this point in the walk, it is usually safe to assume that she will not disappear into the wooded area. It is just past what I call the 'first turn'. 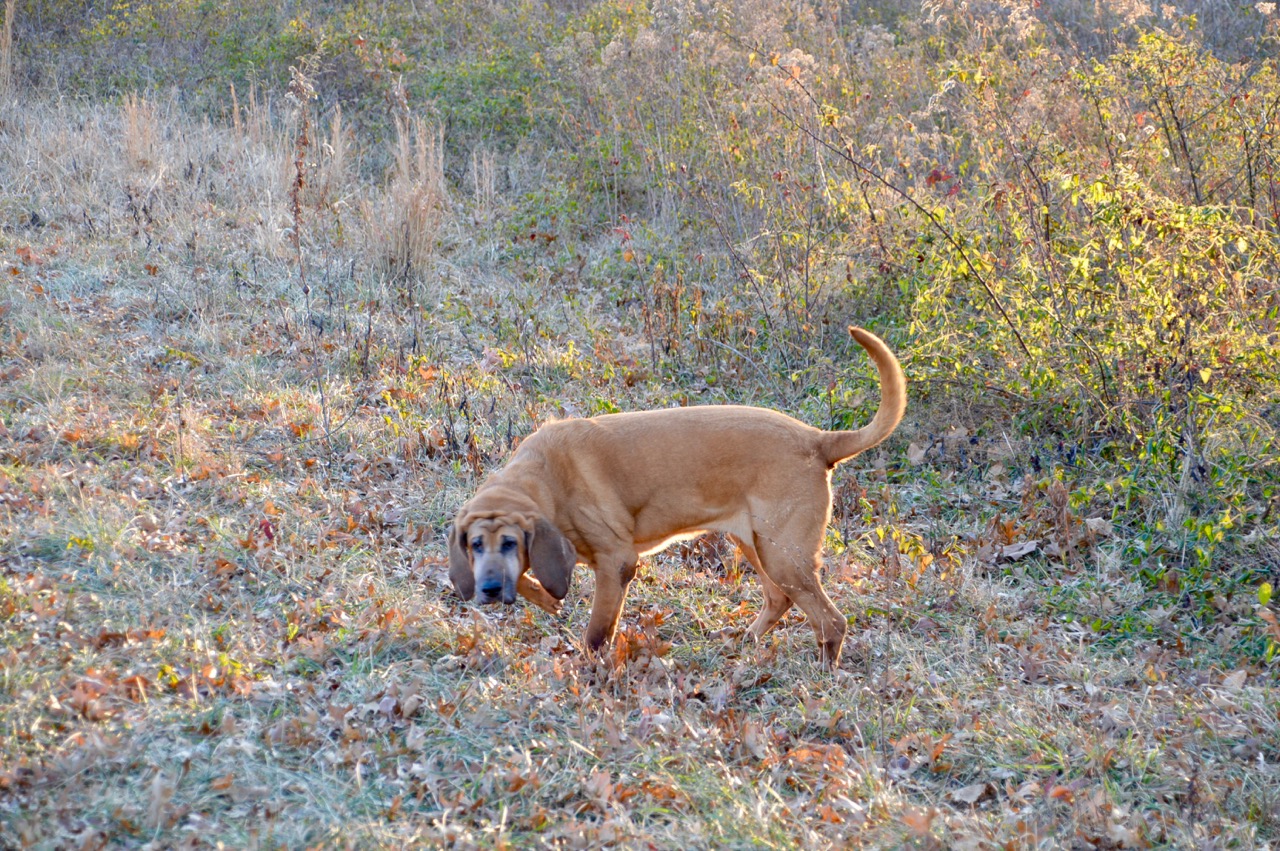 Looking back through my photo library for the past year looking for one particular photo that was not coming up in my search, it's neat to see what the weather was like this time last year. We had already had our first light snow and it was much colder than this year. If the weather of the past few weeks is going to be our winter this year, I'm all for it. 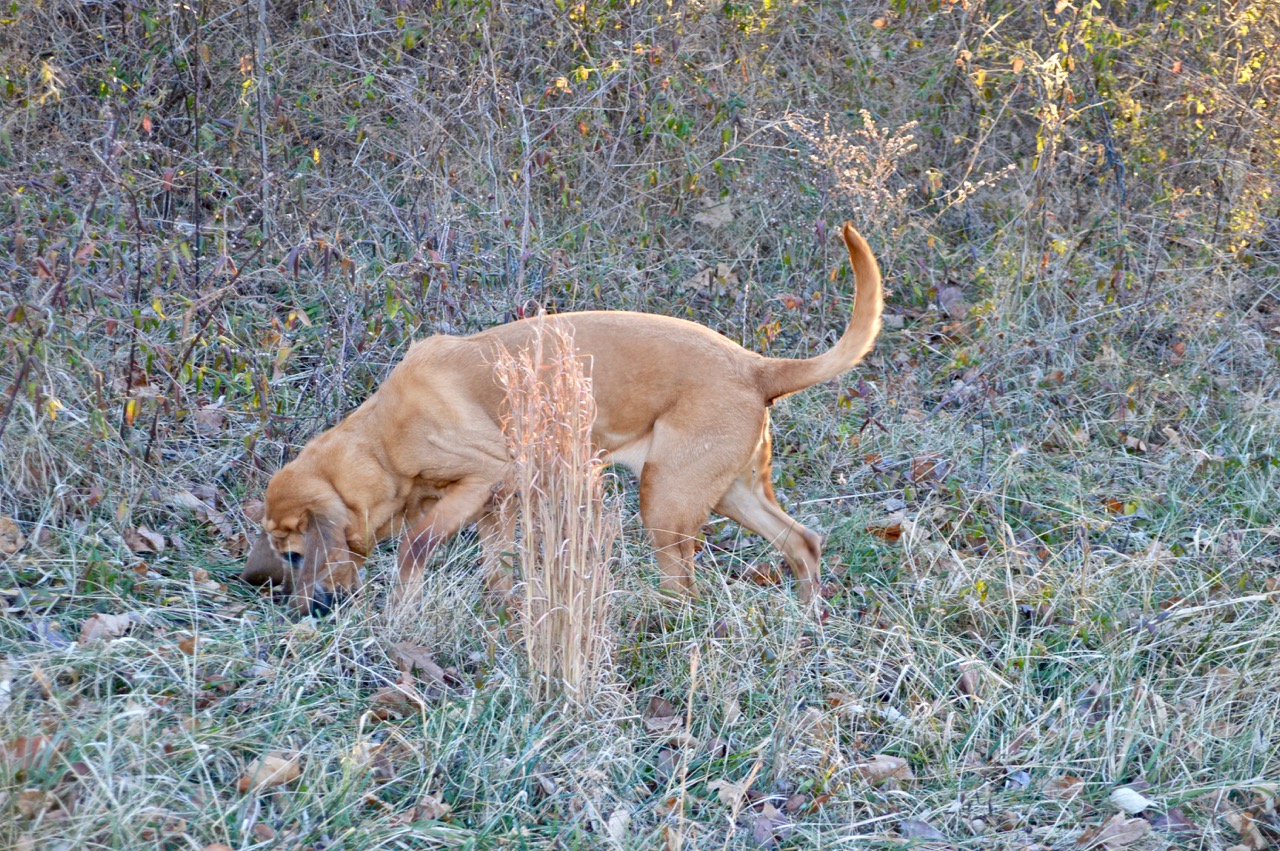 I heard the thundering sound of Sadie running up behind me as I walked along the back of the field. She has been faster than the camera this week. Which reminds me, this morning I adjusted my auto focus setting to 'single point' from 'auto area'. I did that because it seemed to me a lot of my photos lately were burred when I would try to focus in on the hounds. 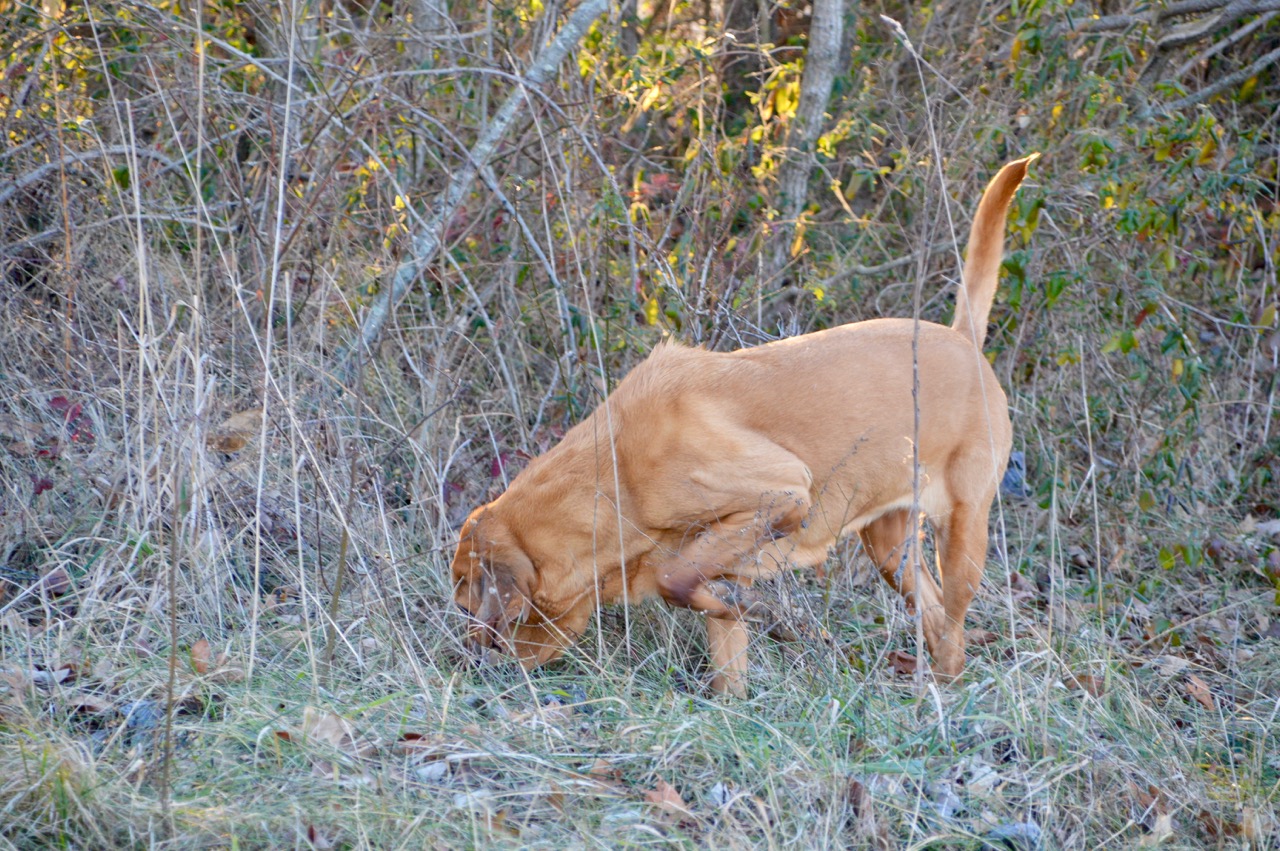 When Sadie has her left paw raised while standing that usually means she is even more focused processing information her nose has found, than she normally does. 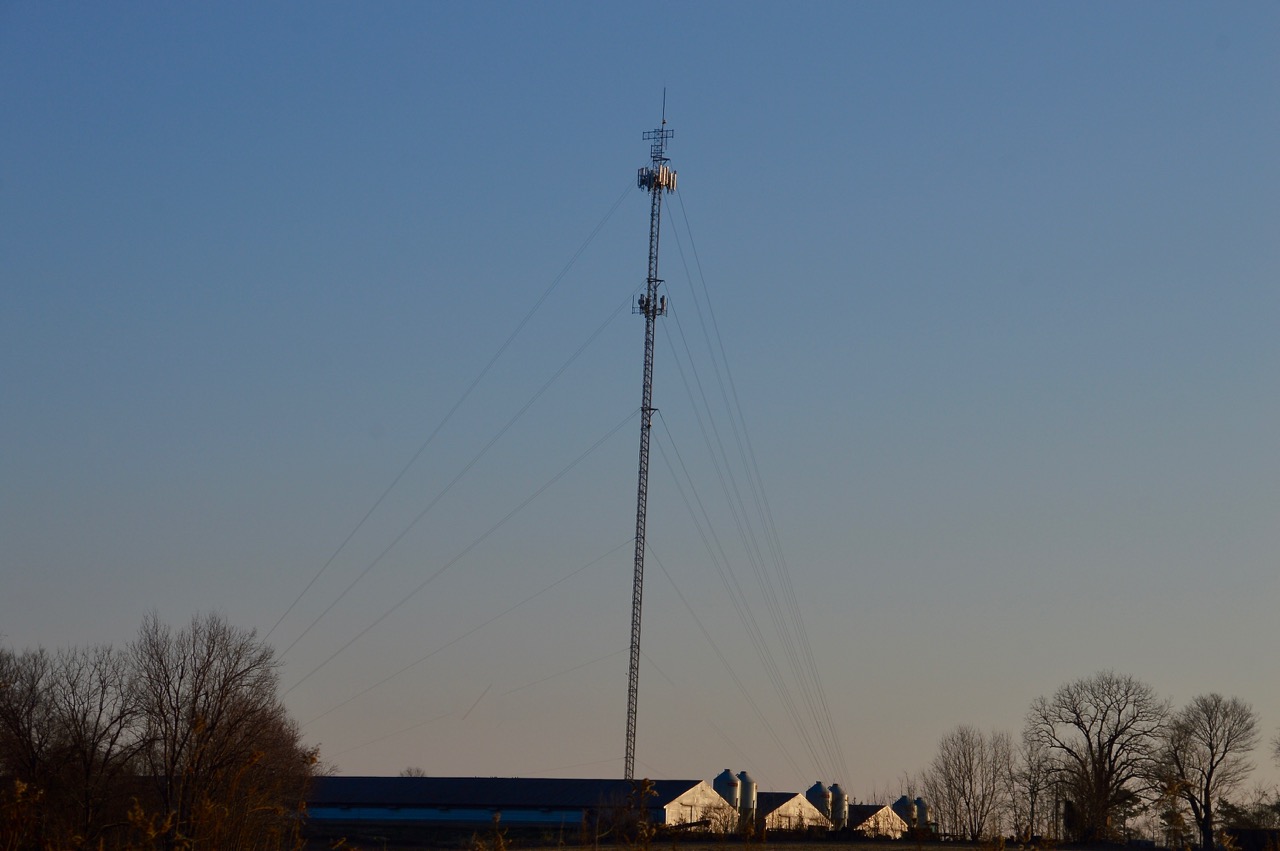 I need some help from the camera or photography 'experts'. I left this photo as is, with the tower leaning to the right. When I looked through my view finder, this tower was lined up straight with he vertical markings inside the view finder ... but came out leaning around 2°. I've seen this in my other photos the past month or so.

Is my camera or lens out of adjustment for some strange reason or is it an 'old thing', much like feeling your ball cap is on straight but the mirror shows it's on your head crooked? 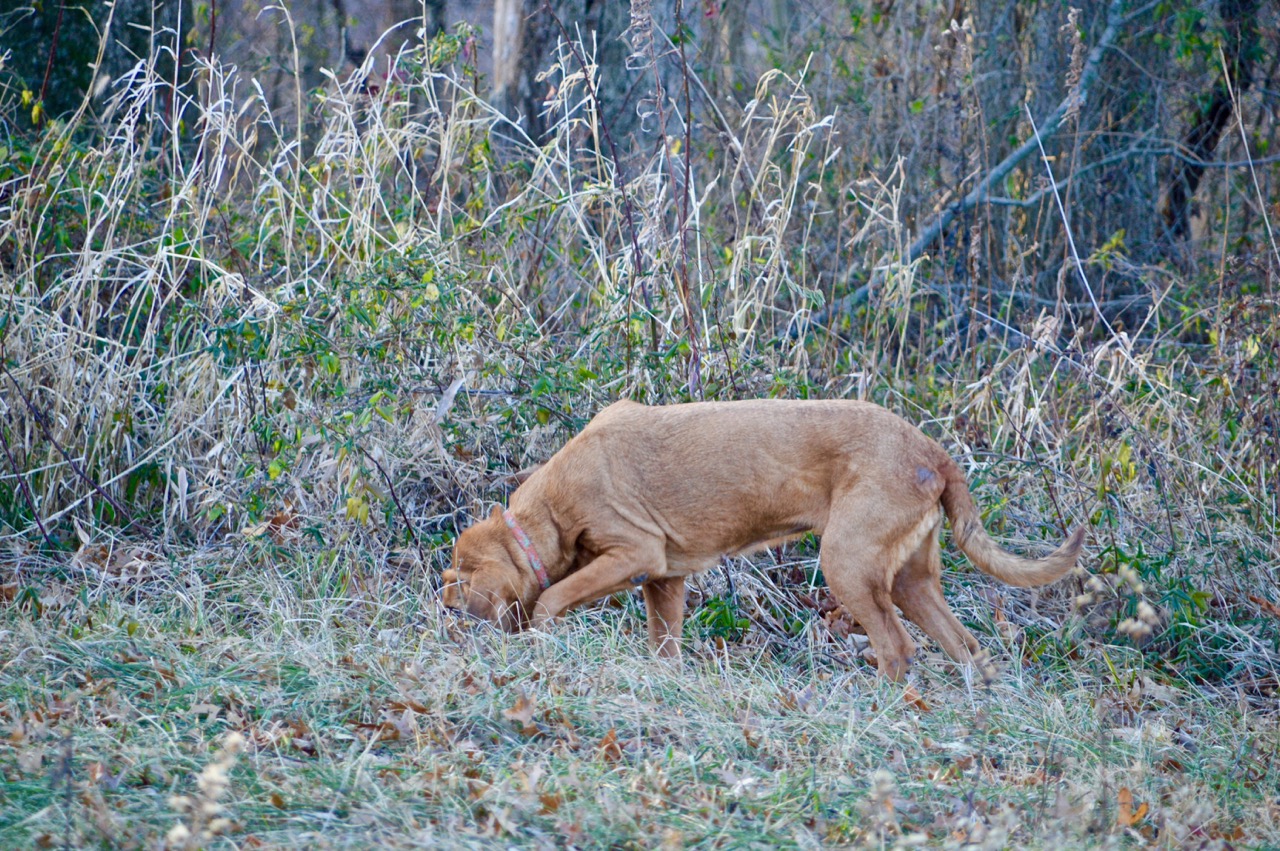 I was shocked to see that Stella had made it 10'-20' feet past the first turn and was within view. That meant I would not have to send out the search teams for her. 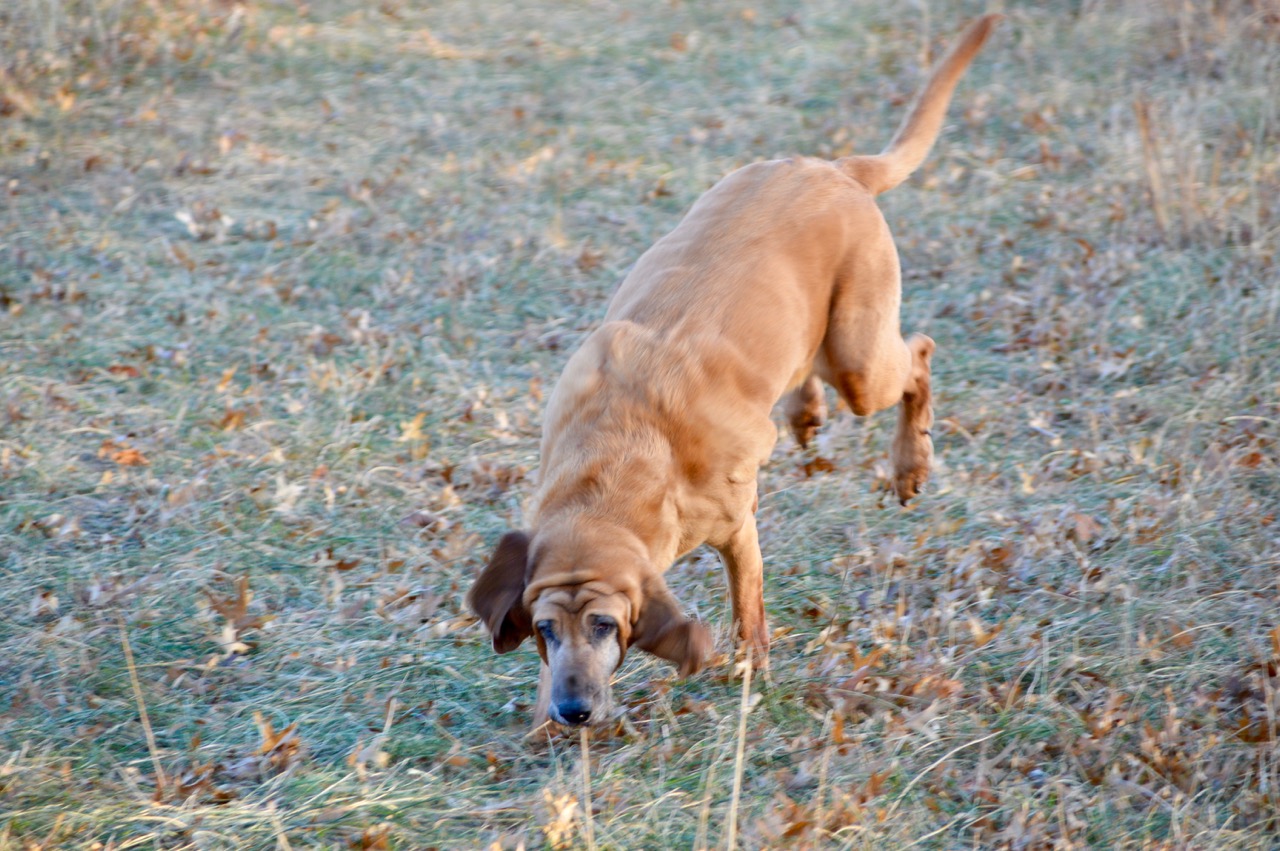 When I told Sadie "we're going home", she was all for it and started running immediately toward the path. 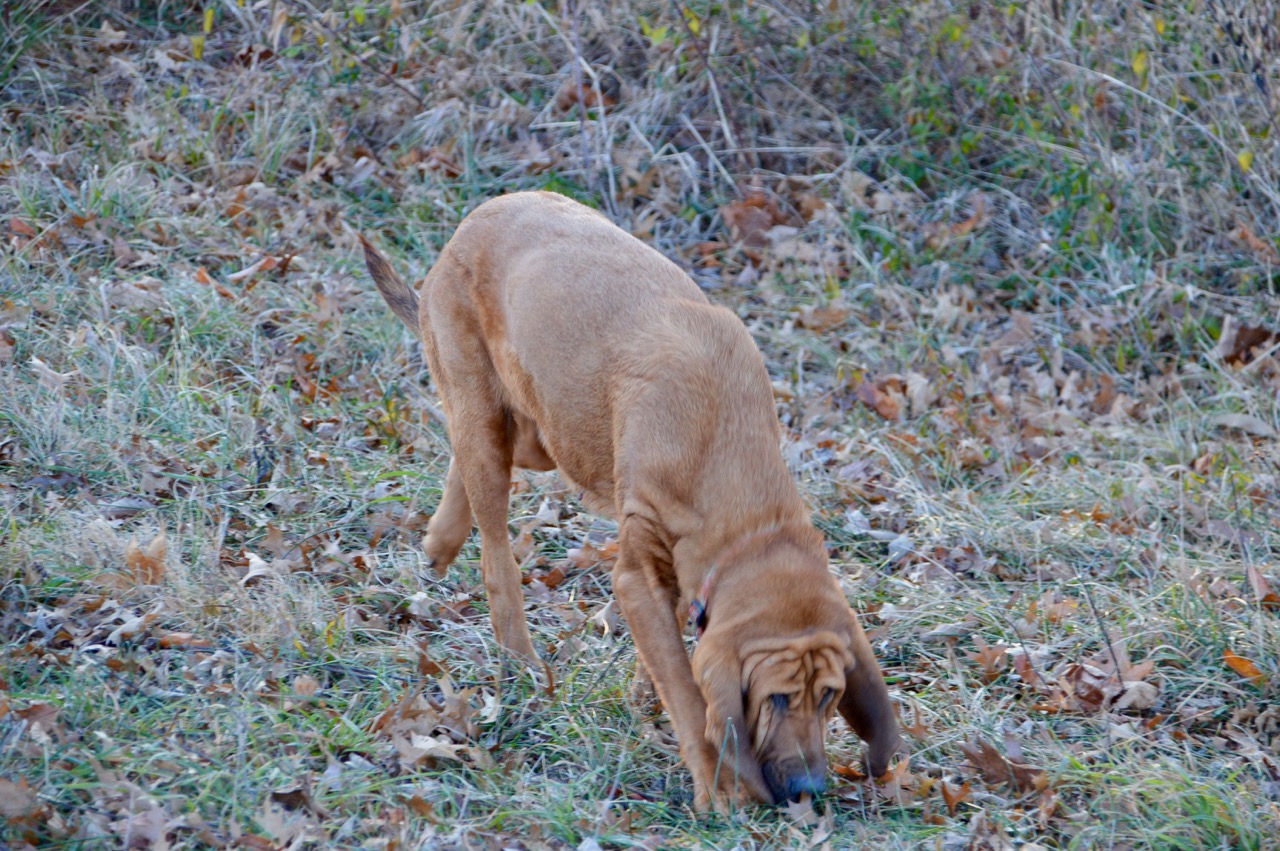 Stella of course acted like she didn't hear a word but was at least headed in the right direction. 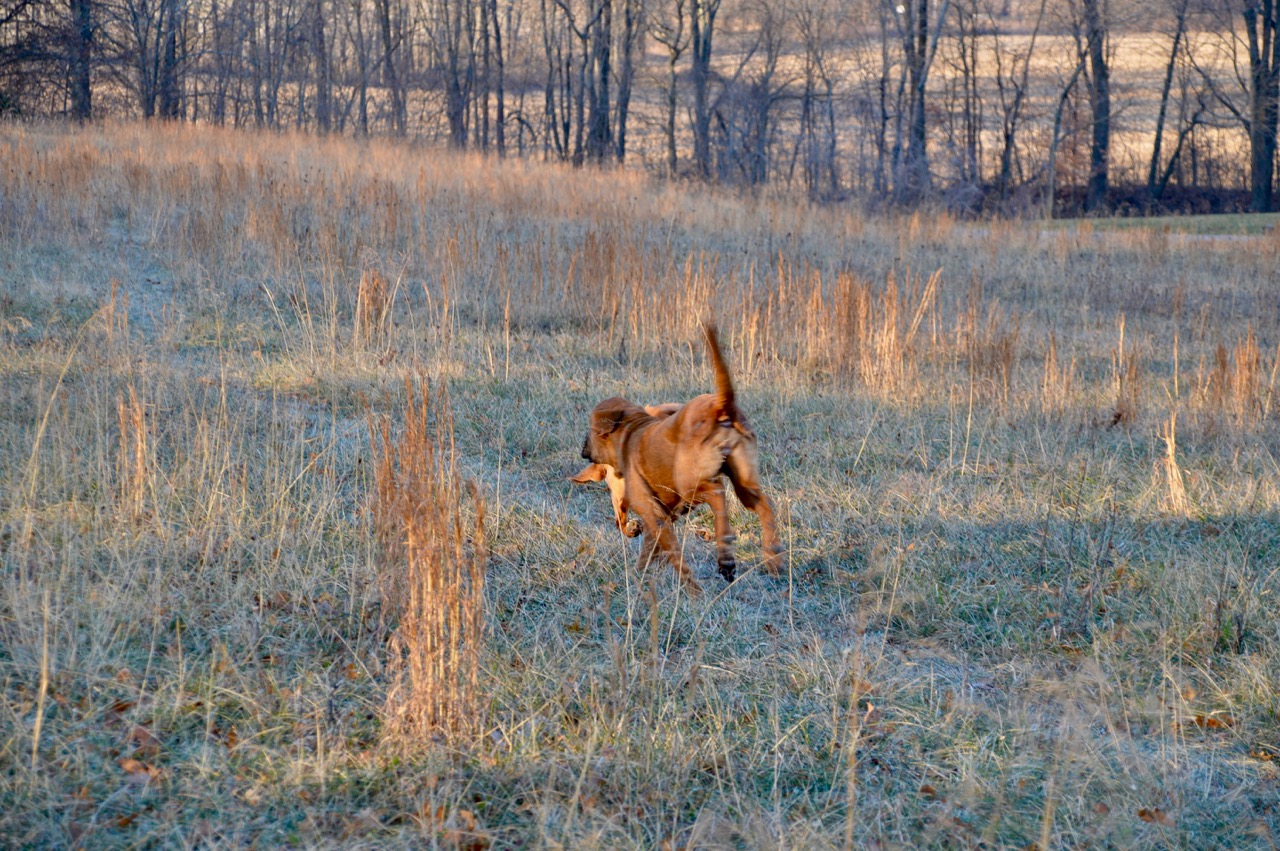 Once she saw that Sadie was getting away and might find things before she would ... she took off sprinting. 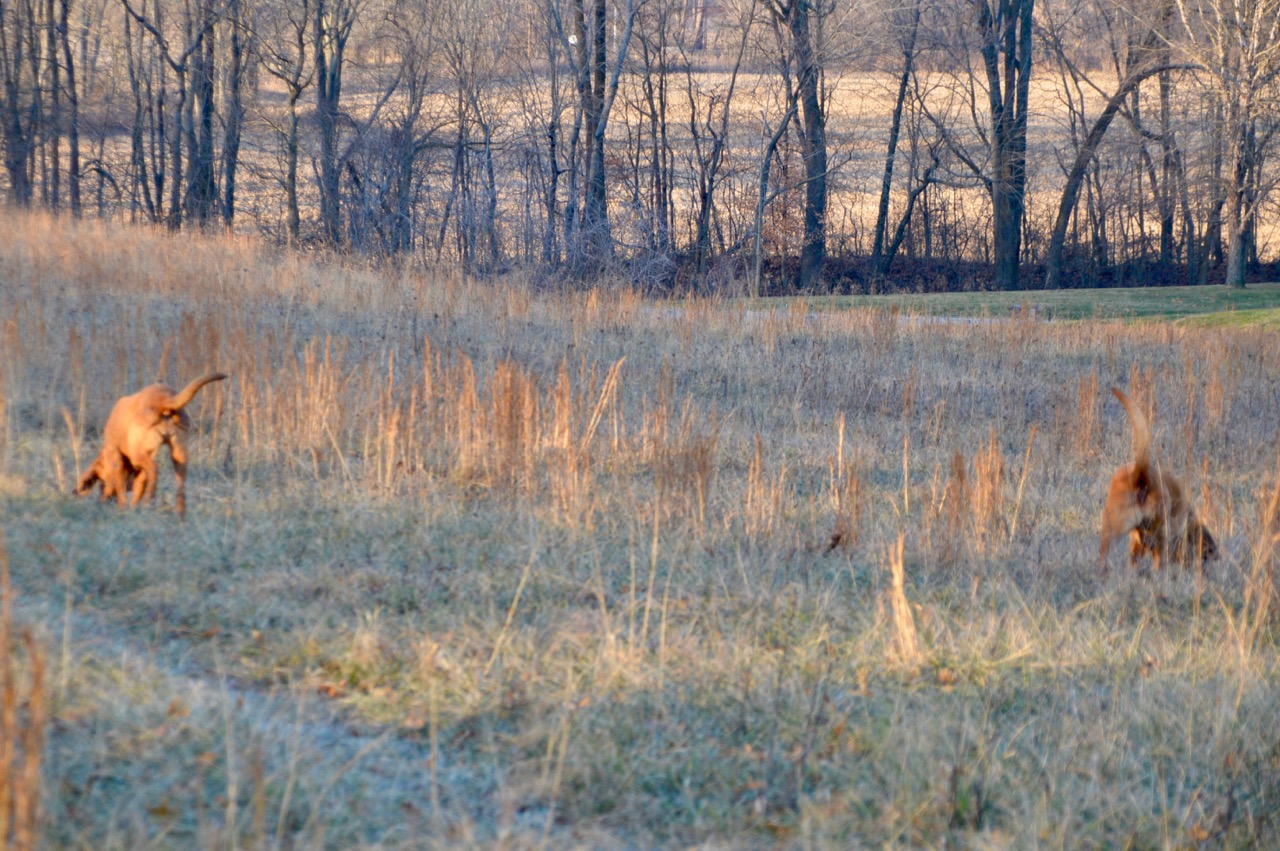 This photo is one that I adjusted 2° to show the highway that I know is level, was level in the photo instead of going downhill to the right. 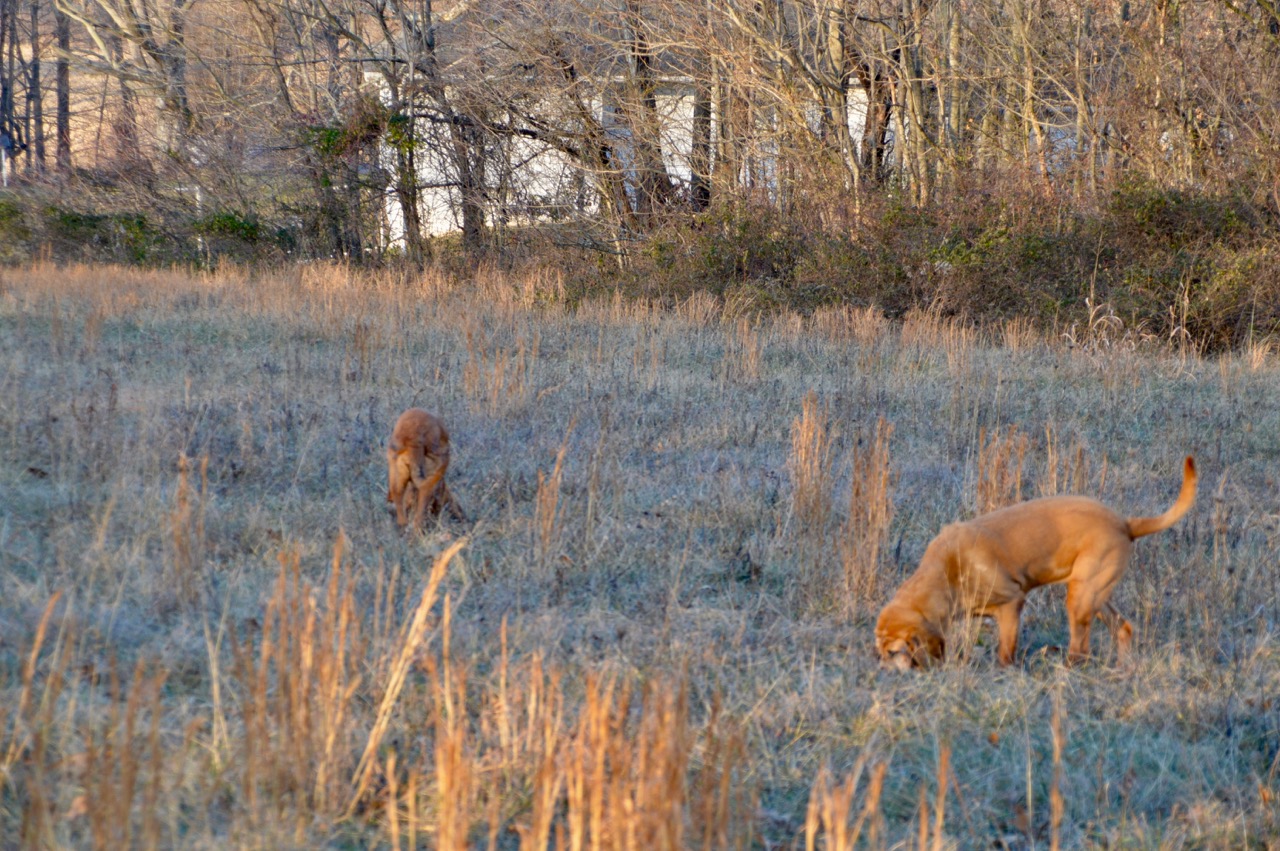 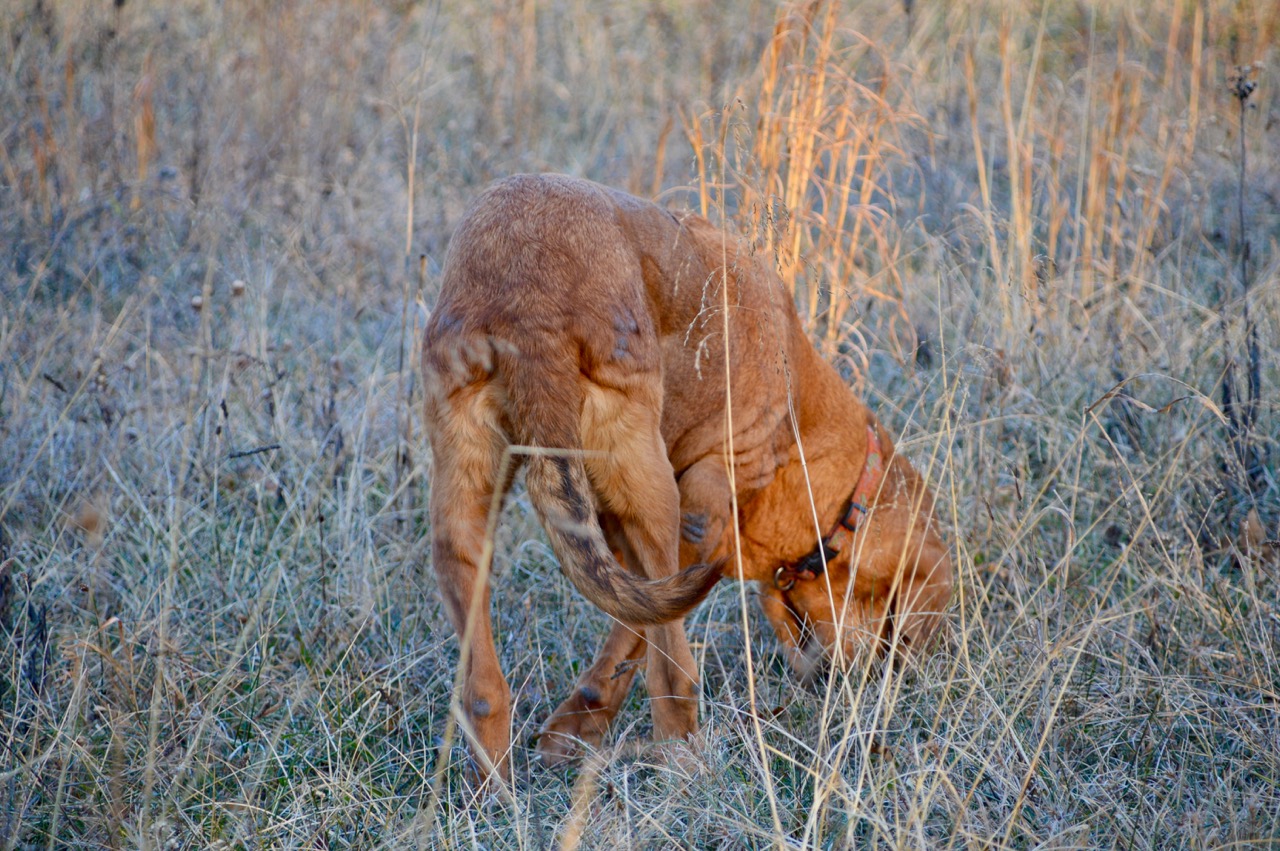 From Stella's tail I am sure one of her parents was a 'black and tan' bloodhound. It's also the reason her original owner named her 'Dipstick'. Changing her name was one of the first things I did when I brought her home in August 2015. 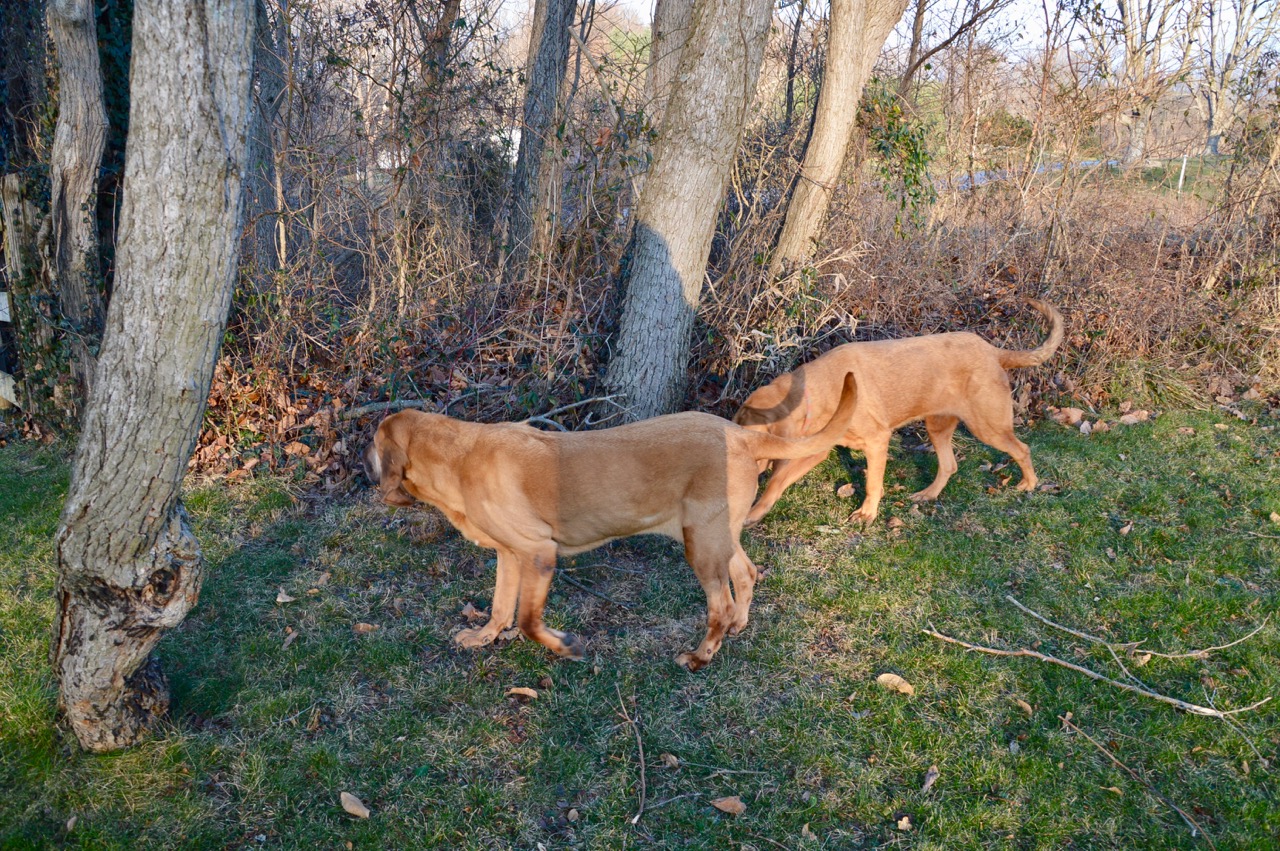 With my flashlight finding the cat eyes in the dark this past week, we now know that is the scent the hounds pick up in the yard. With the sun out today it might be the right time to bring 32gl can with me and pickup tree limbs laying in the yard from the recent high winds we have been having at night. 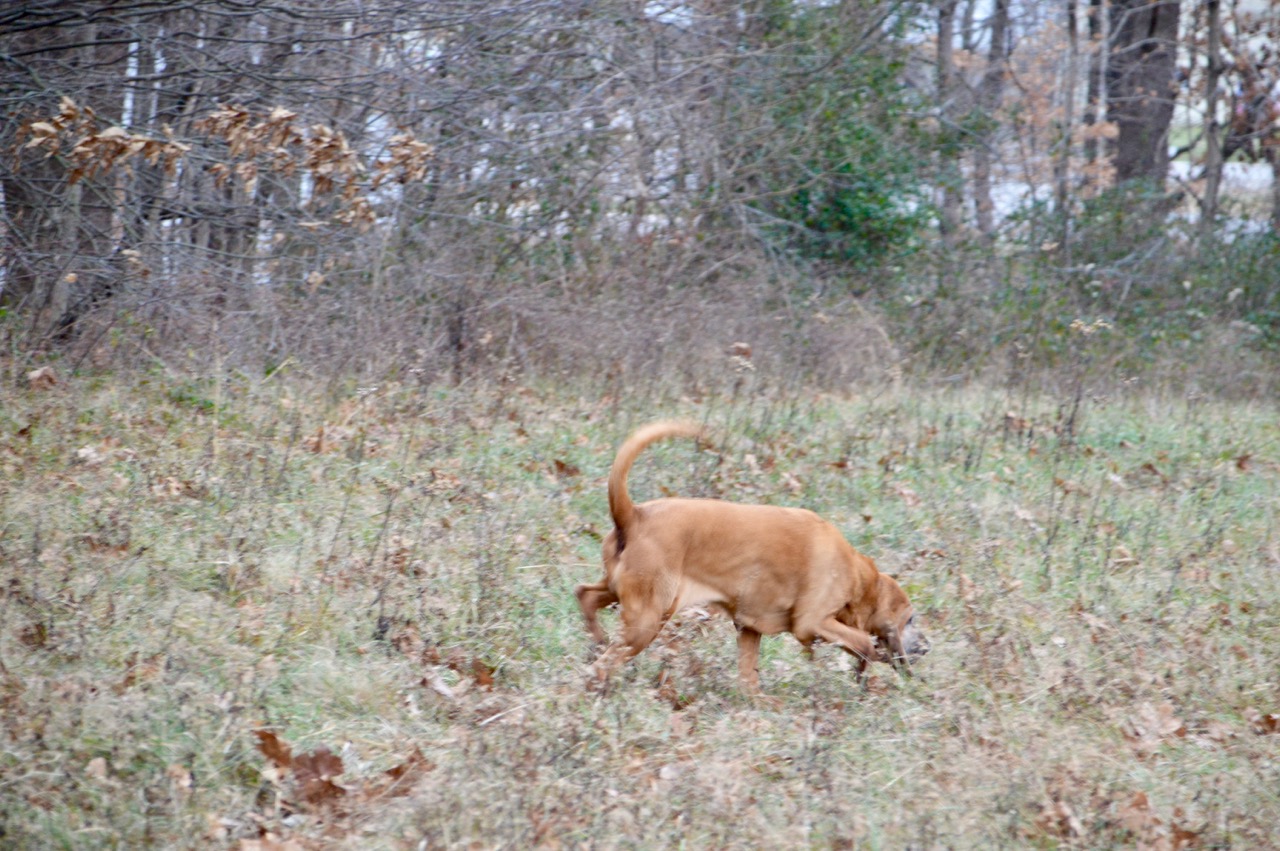 Here are some highlights from yesterday morning's walk. I did post a few pictures on my Wordpress blog yesterday but only a short intro for content. The rest of the photos were taken in overcast skies and an auto focus setting of 'auto area'. 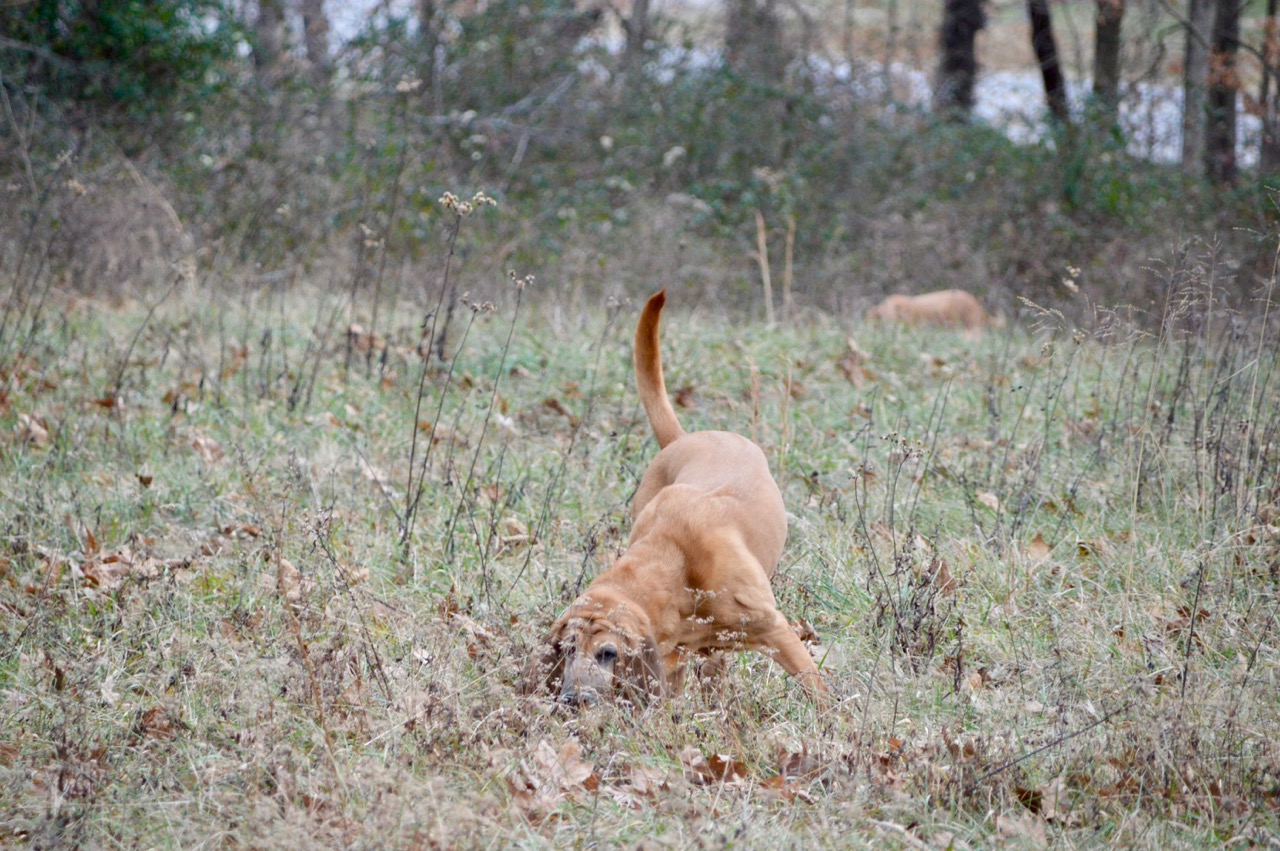 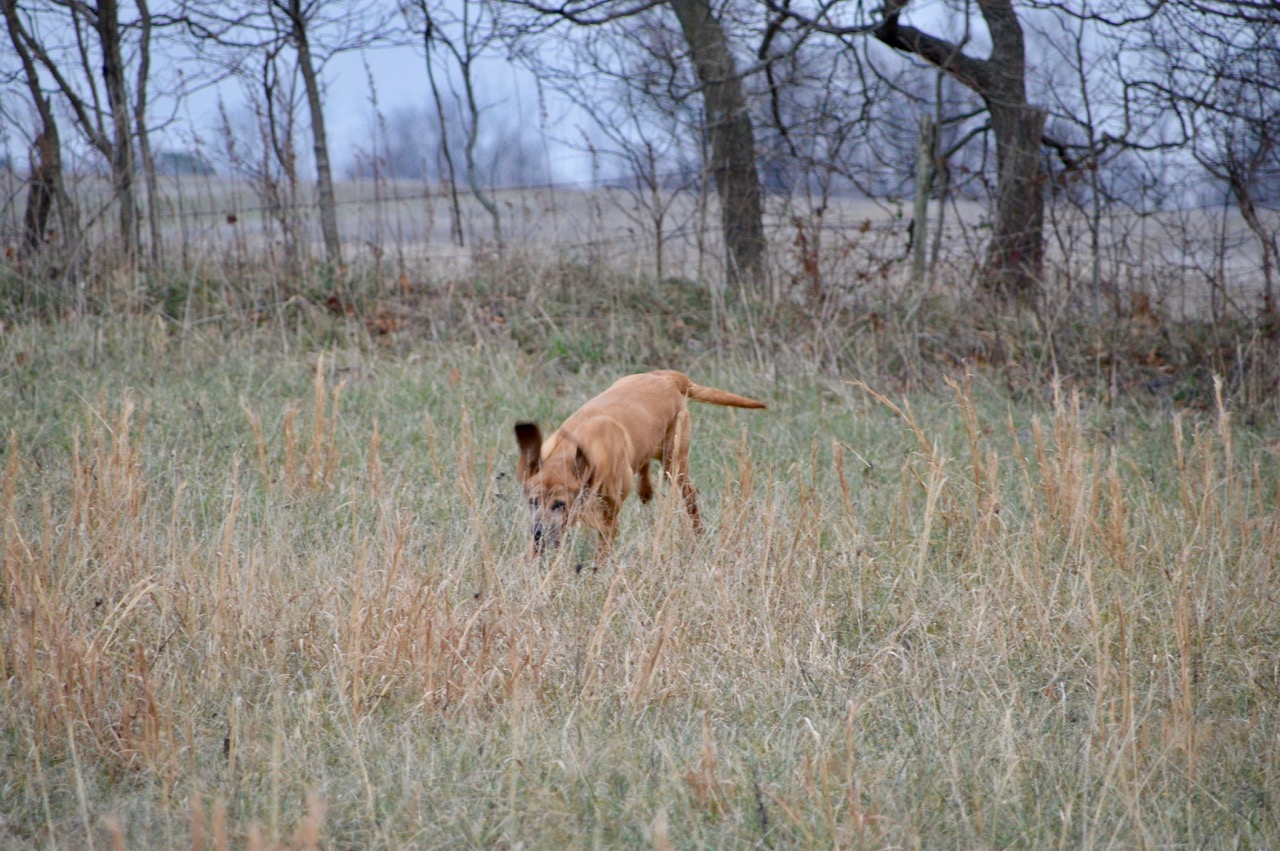 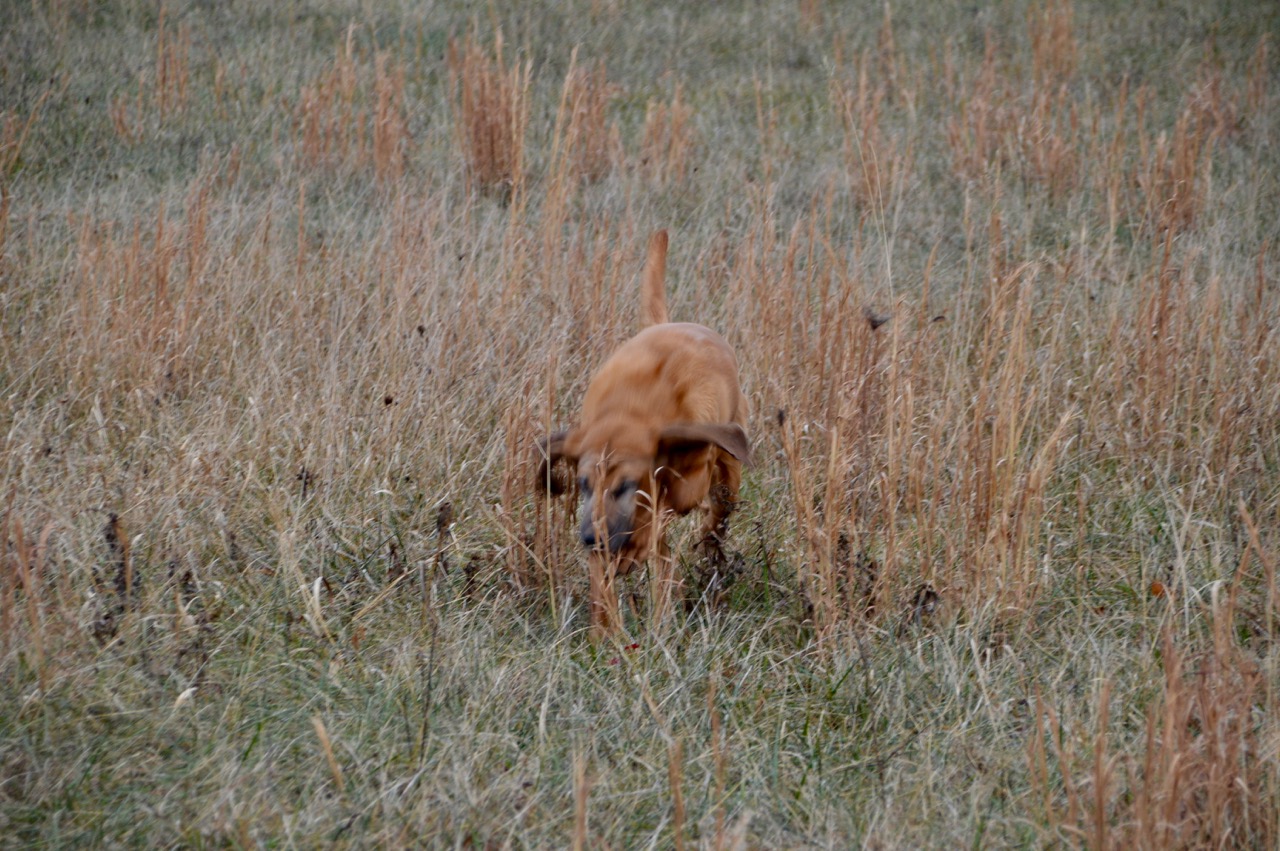 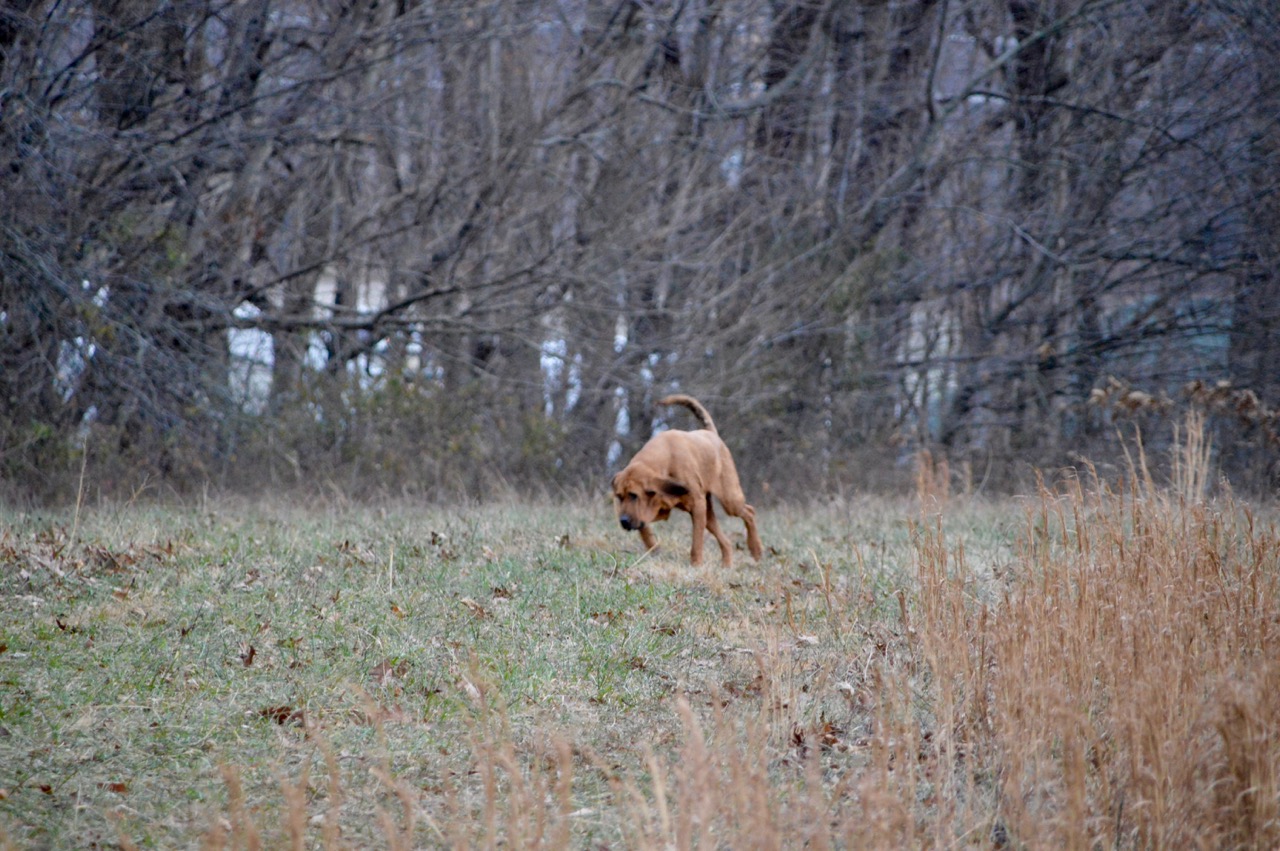 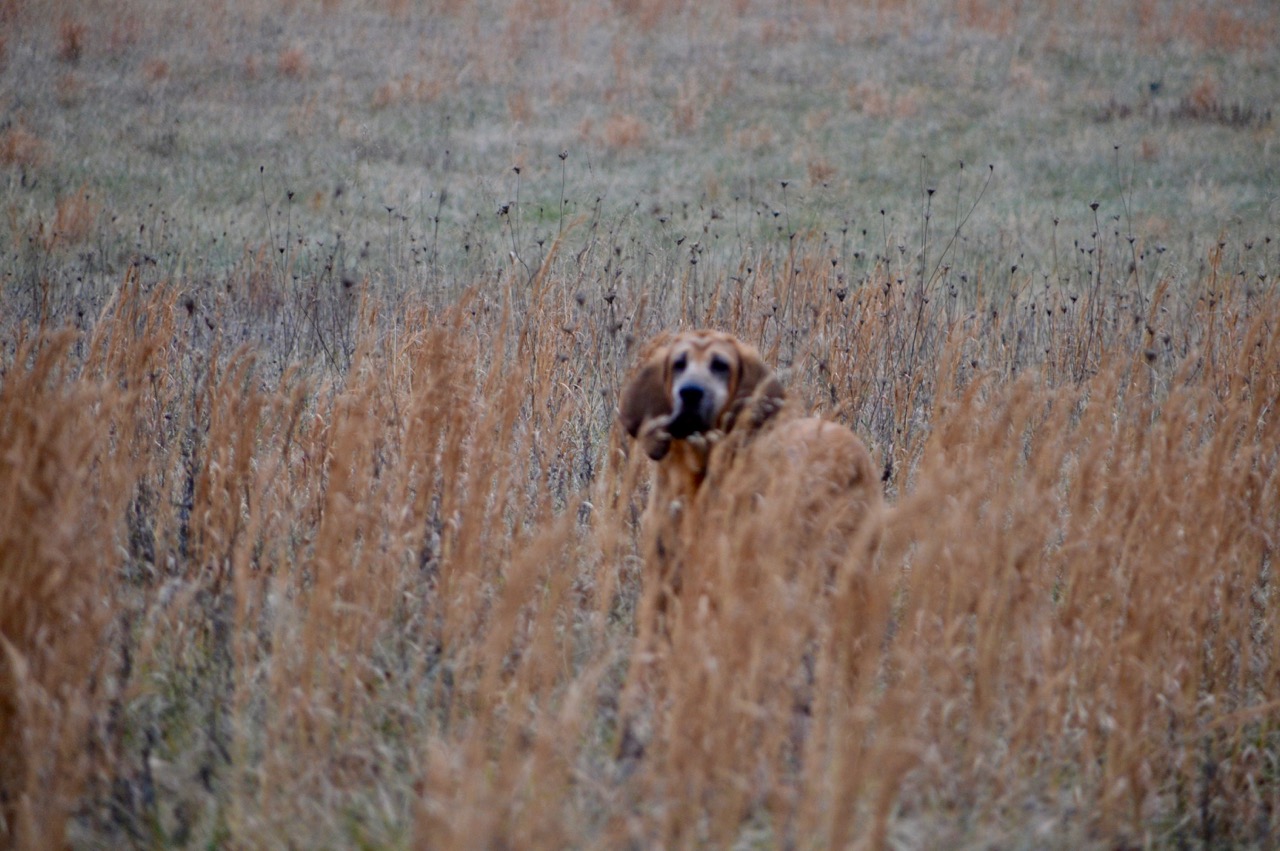 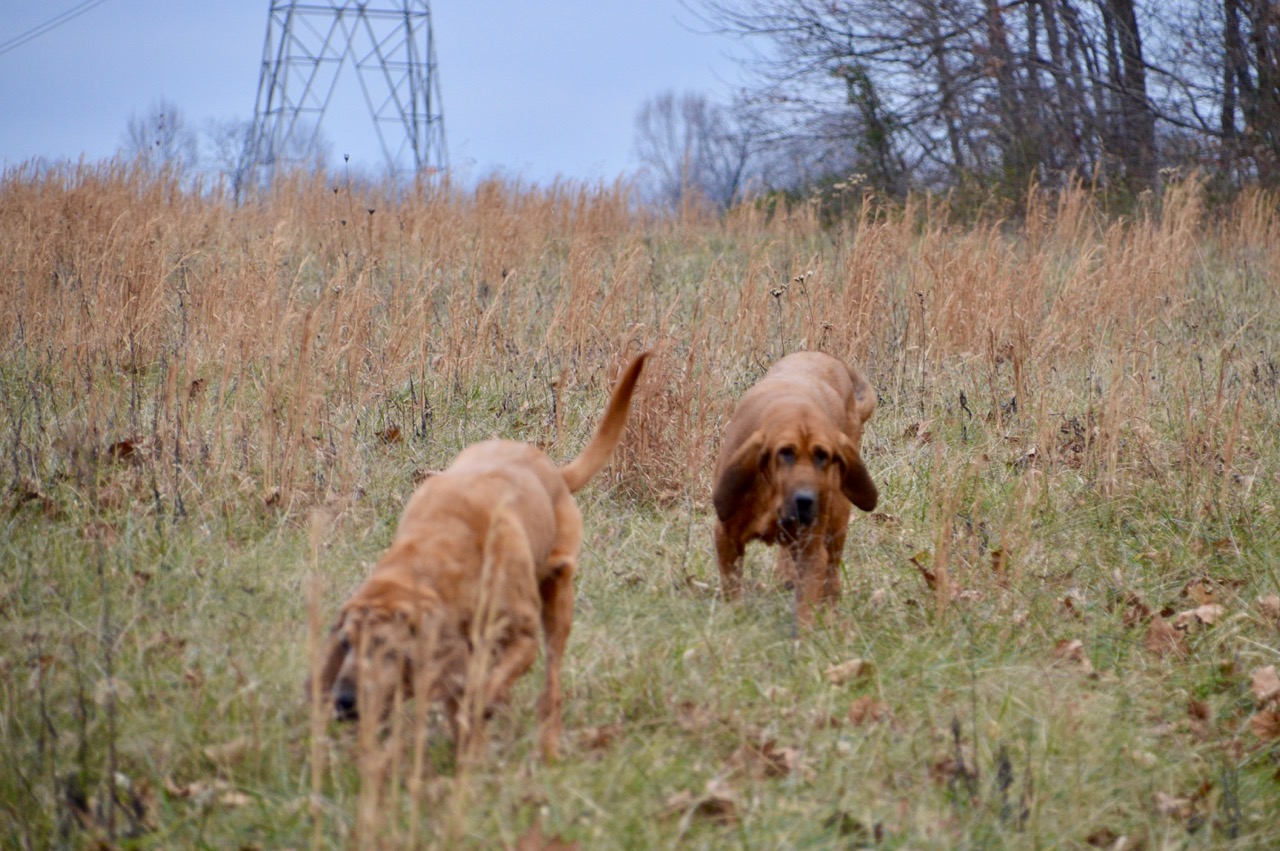 Only three photos were taken after yesterday's lunch. With the cold wind blowing all of the hounds were not out longer than a few minutes.

Hard to believe it's Friday already. For doing nothing everyday the week sure flew. The recycling bin is loaded in the FJ so I'm headed to the recycling center right after I post this. I'll take a few photos along the way and post them later today or add them to tomorrow's post.

It's a cool and sunny day this morning in 'the tropics' of Southern Indiana.
at December 15, 2017