Coldest Day Yet But The Hounds Love To Walk 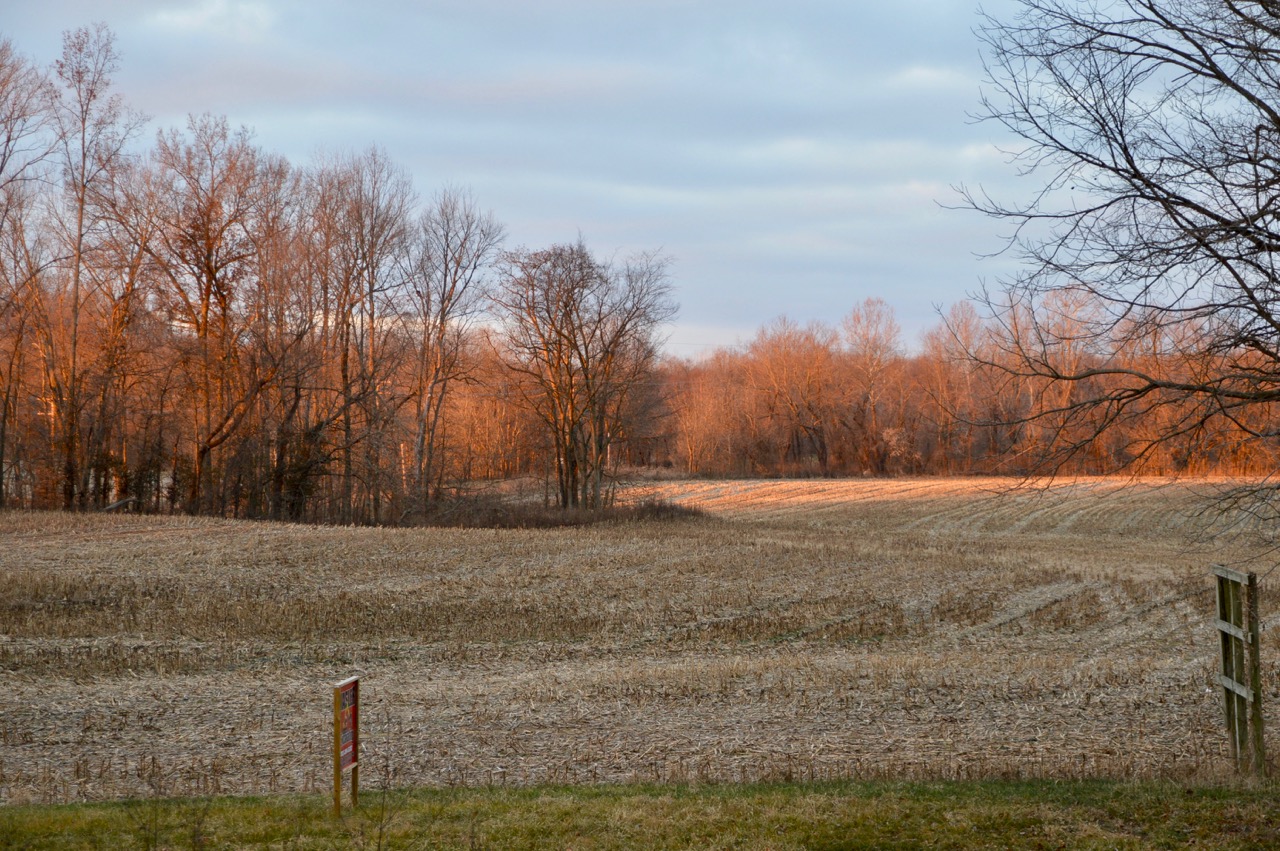 It was nice to see that sunshine but don't let it fool you. We were out the door before 8am and my WeatherBug app was telling me it was only 25° but was going to feel like 17°. Sadie started her 'stare down' around 7:30am from the doorway wanting to walk and started whining by 7:50am ... I knew I didn't have a choice. So I dressed as if I was going to spend all day on the ski slopes, grabbed the Nikon and took off. Only my face told me during the walk just how cold it was. 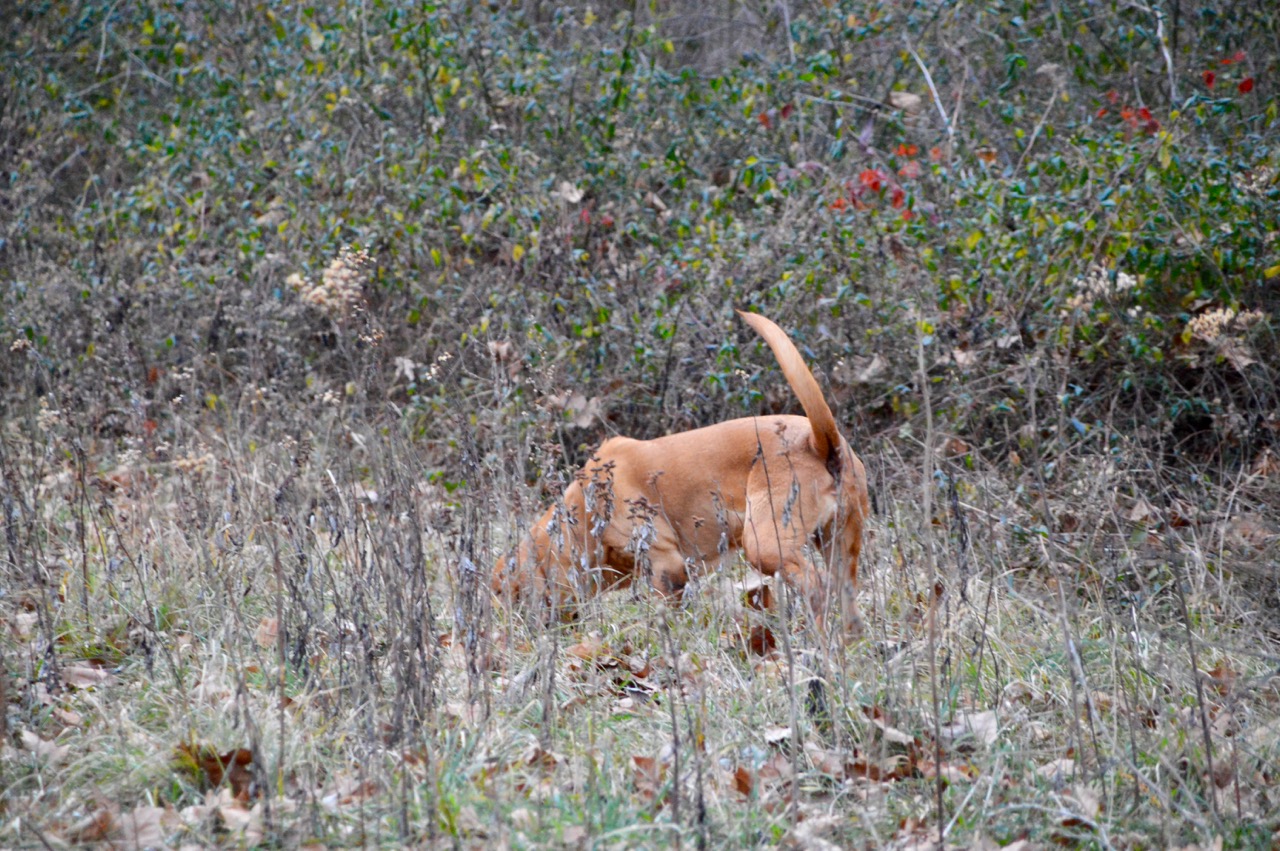 To not confuse, I have changed to writing content that goes with the photo below it, instead of switching in the middle of the post. Feels like the right thing to do, so I'll go with it. From the time Sadie had hit the field for the 3rd time since she woke up ... she was all action. There would be nothing but high paced tracking for her today. 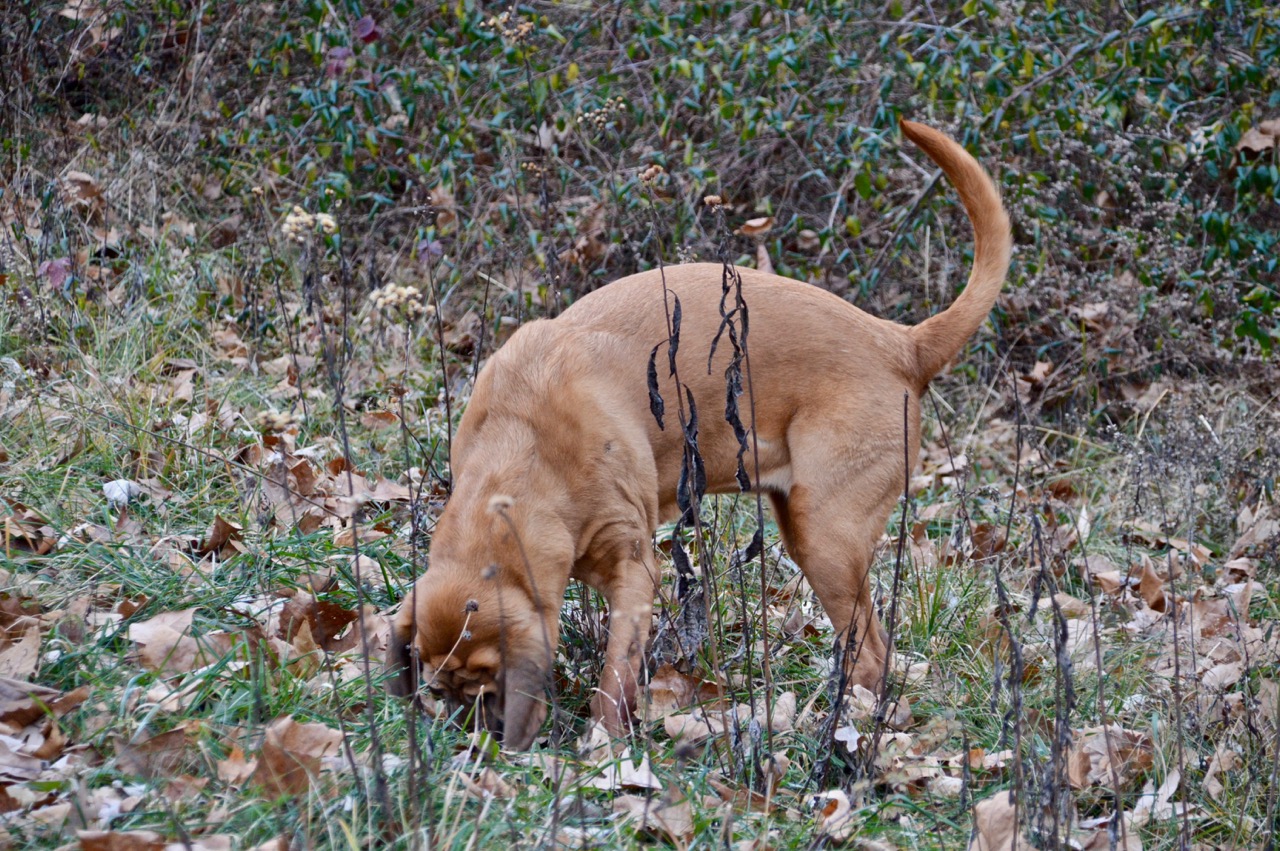 There were a few spots where more intense research had to be done for her to identify what had been there. She can never miss anything when her radar is locked in, otherwise known as her curled tail. 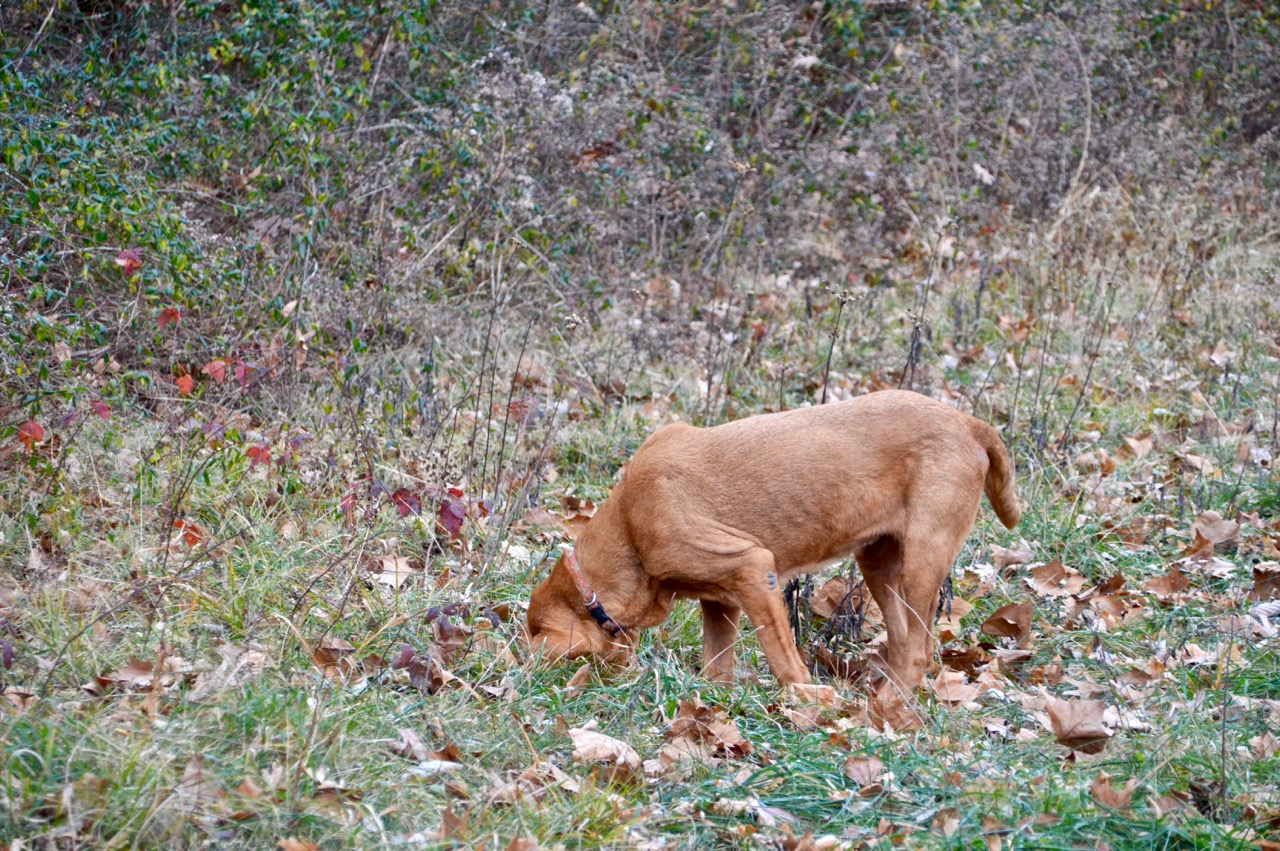 Stella is just ... well Stella. She was on her own today. With the temps below 20° my jaws couldn't handle repeating "come on" to her a hundred times during this walk ... so she was on her own. I had a sneaky suspicion I would not see her on our way back and would be spending some time looking for her. 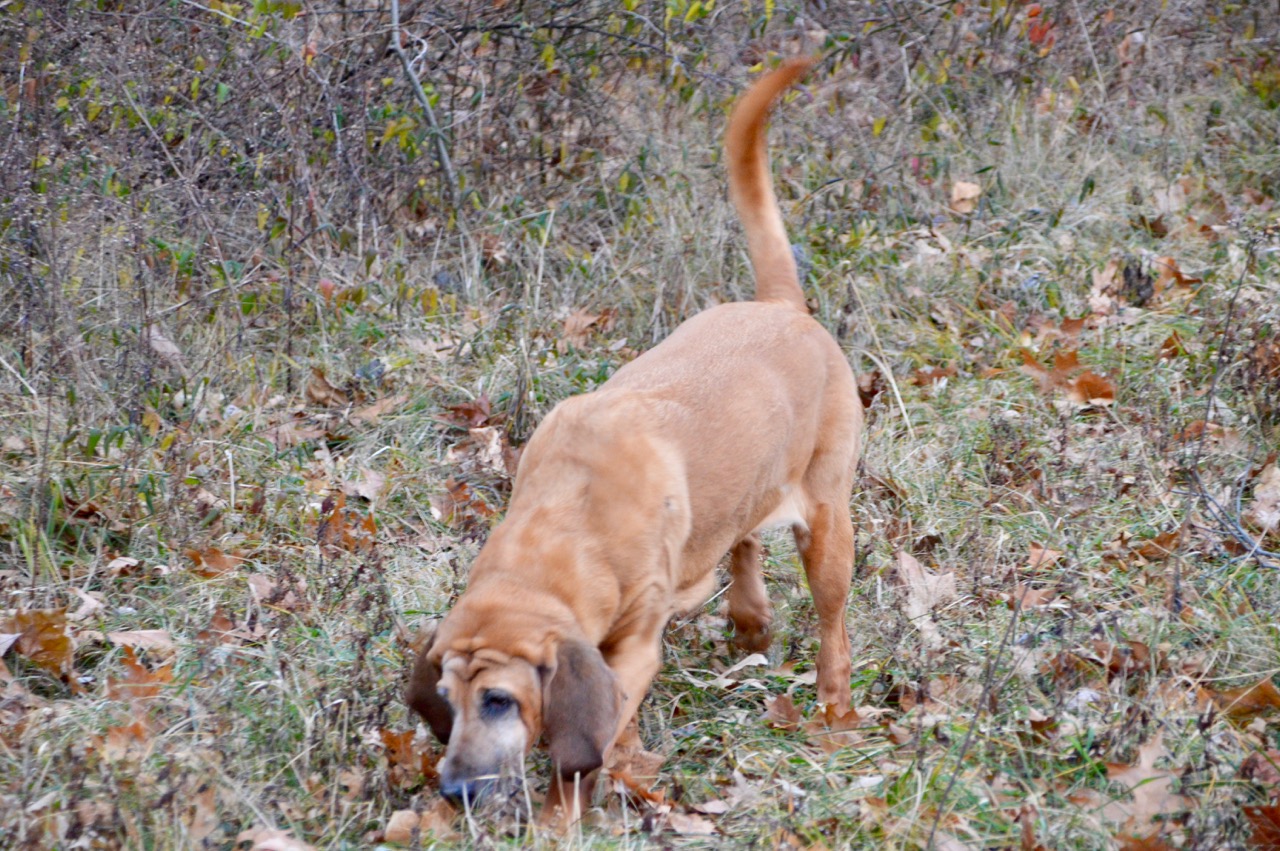 By this time Sadie's jowls were making noise to let me she was still nearby. I'm wondering if the colder temps make the scents stronger. 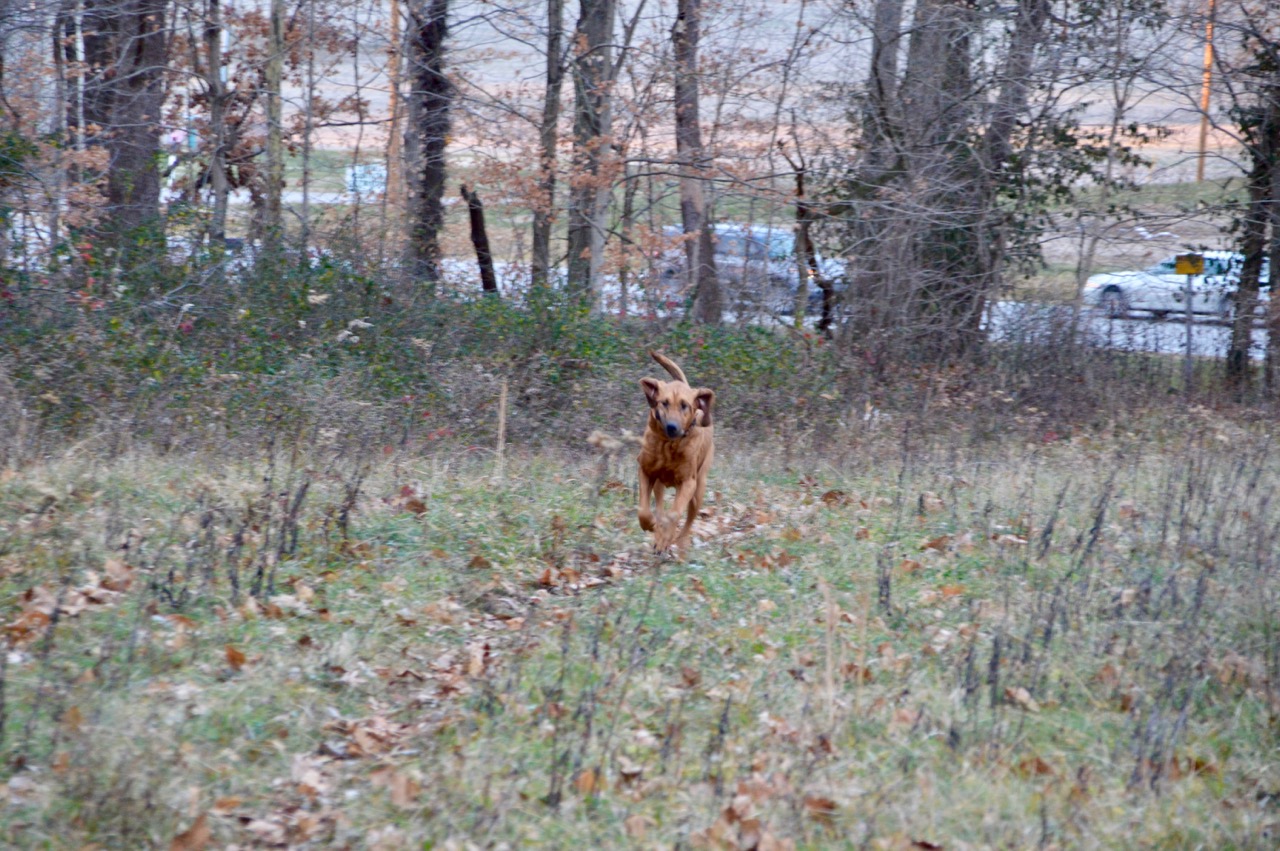 I was shocked to see Stella running our direction when I turned around to check on her but don't let that fool you into thinking she is going to walk with us today. I'll tell you beforehand, Sadie and I were on our own today. 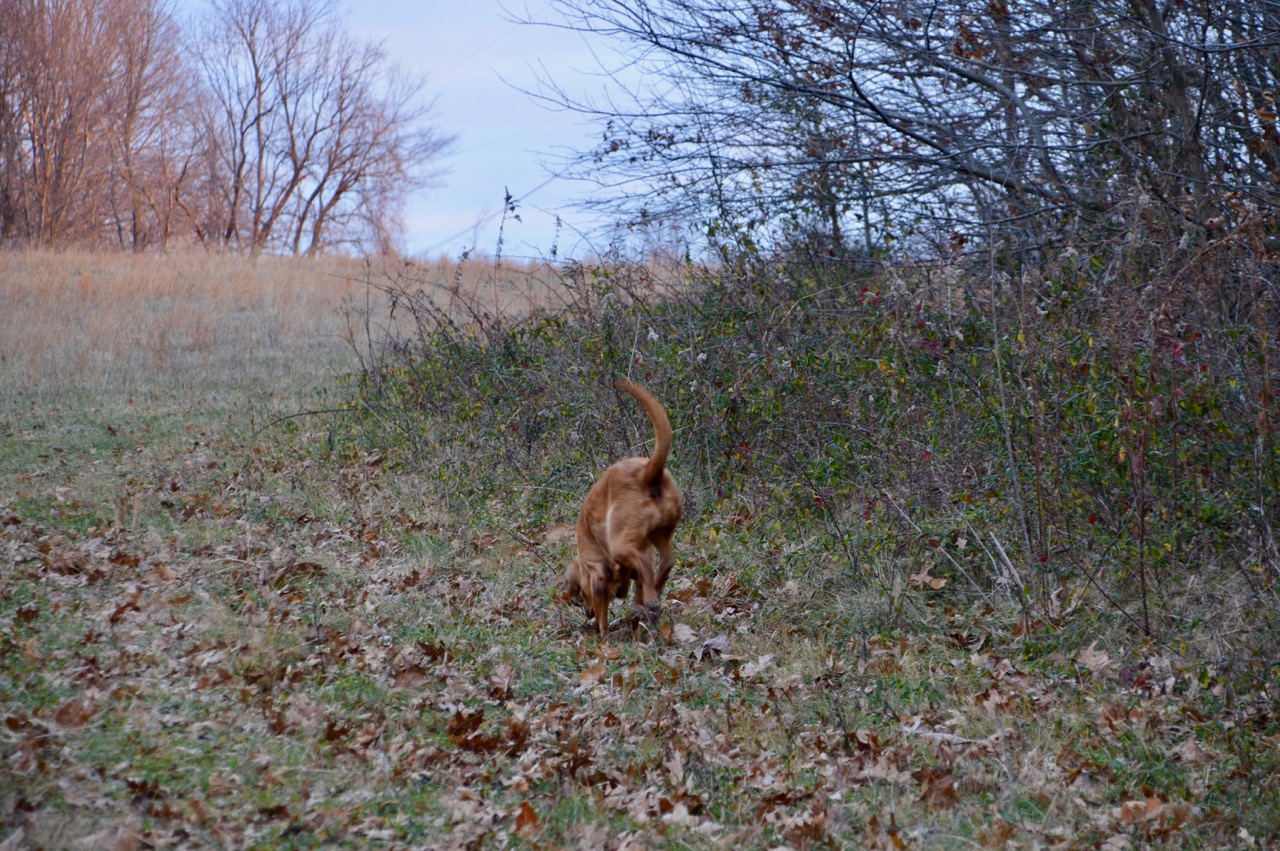 As you can see Sadie was pretty oblivious to everything else going around her, and it did not matter who was or wasn't walking with us. 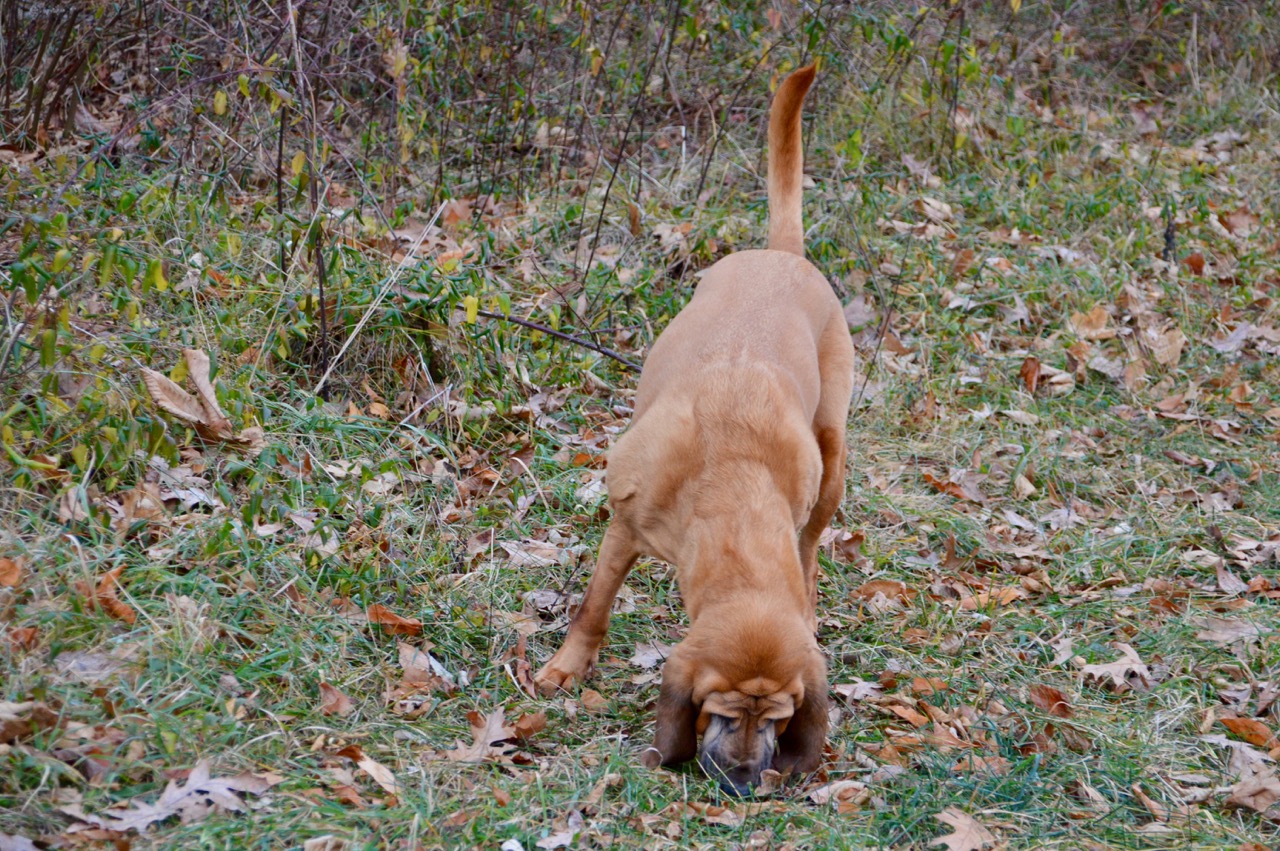 There was no eating this morning just pressing her nose into the ground a little harder and you can tell by those folds in her forehead she is doing a lot of analyzing about what she has found. 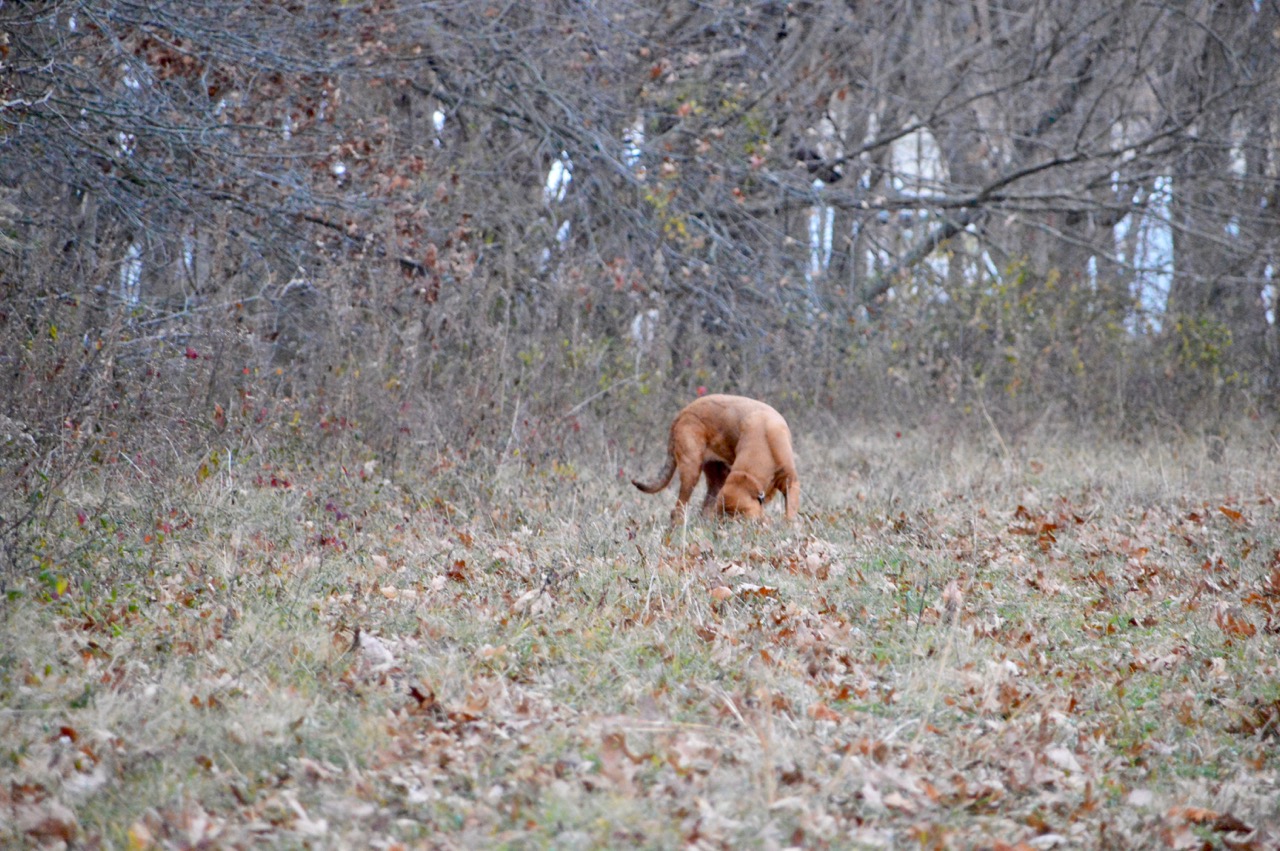 Who knows, maybe all the 'natural protein' Stella has eaten over the past 8-10 months has helped her regain all of the weight she had lost early last year. 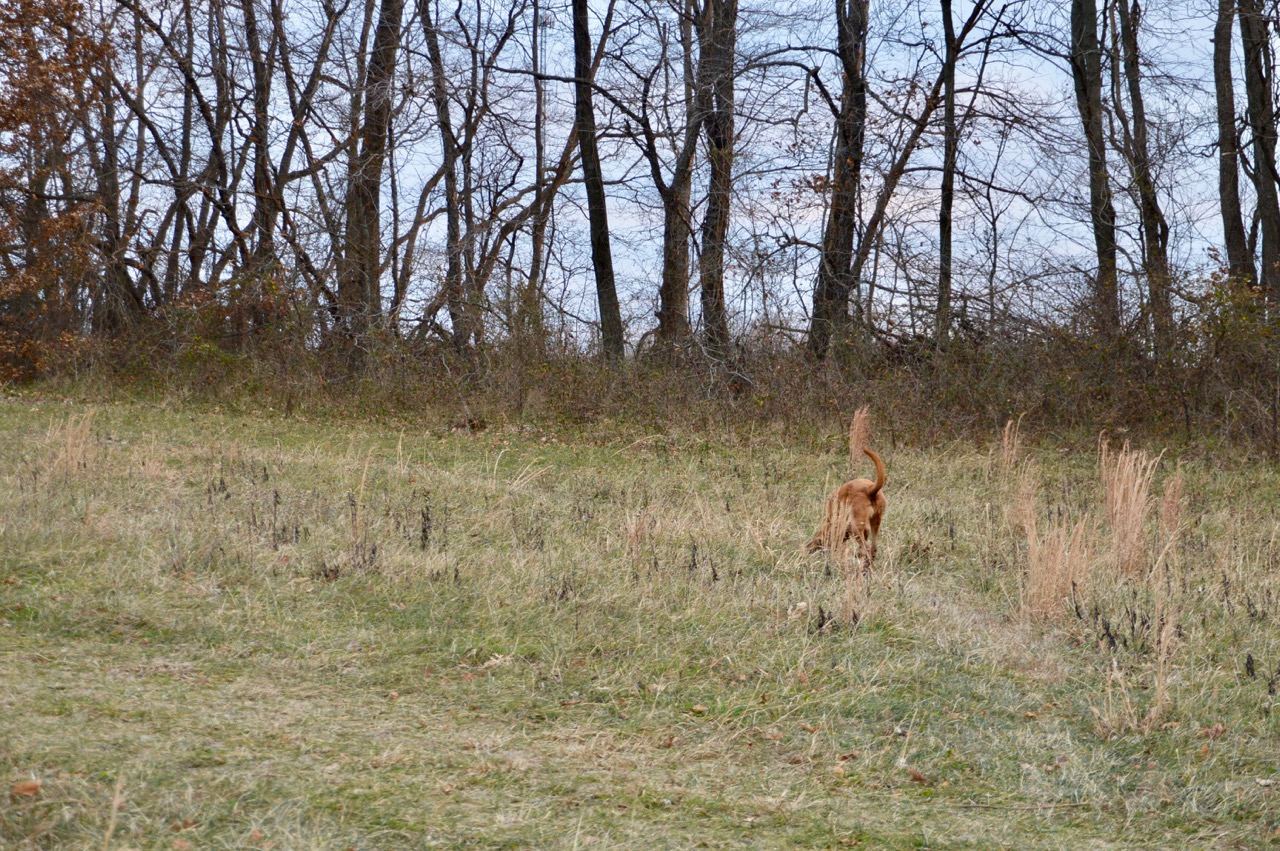 By this time my exposed face is frozen. Watery eyes made it hard to see through the camera's view finder and the freezing wind had really picked up coming out of the NW instead of our normal SW direction. Everything else I had worn was keeping me toasty warm. The ski gloves were pulled out this morning for the first time this winter. 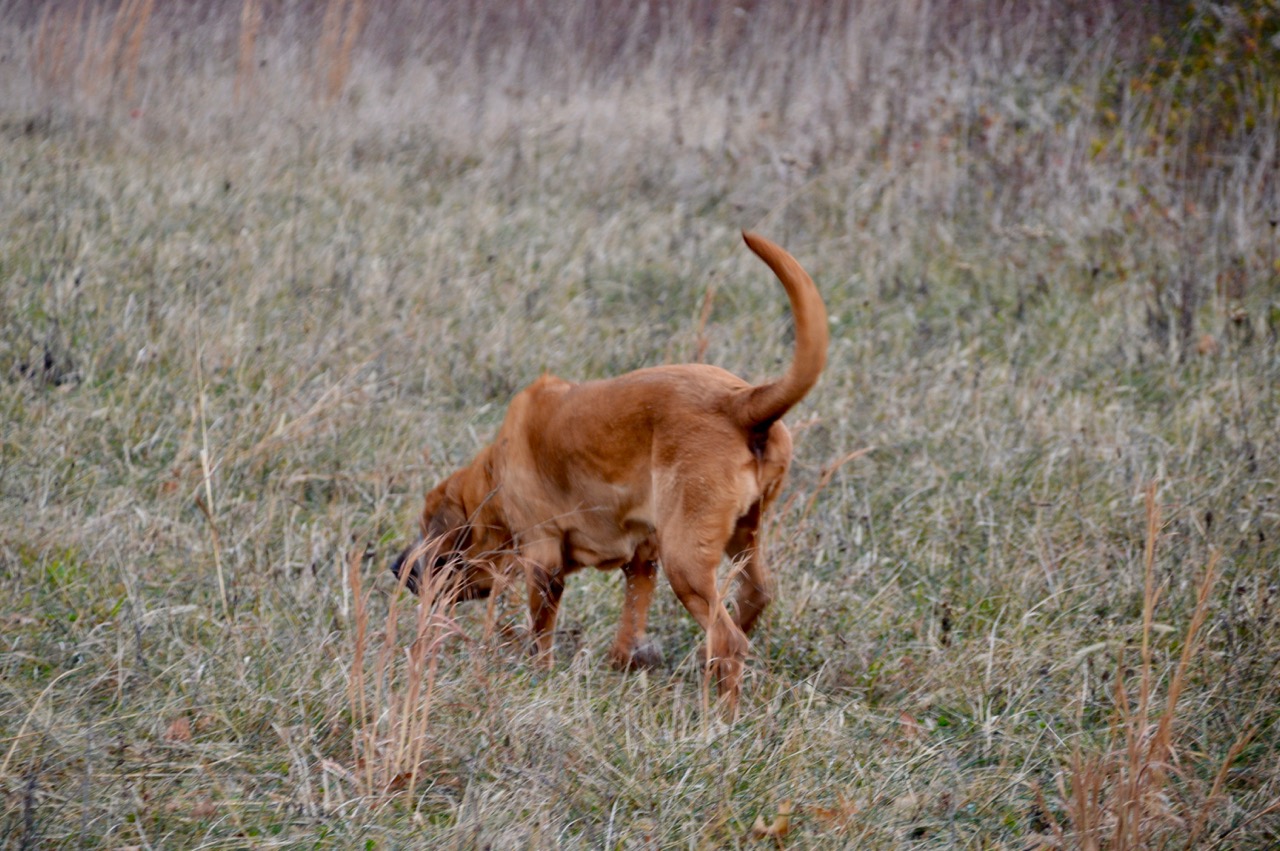 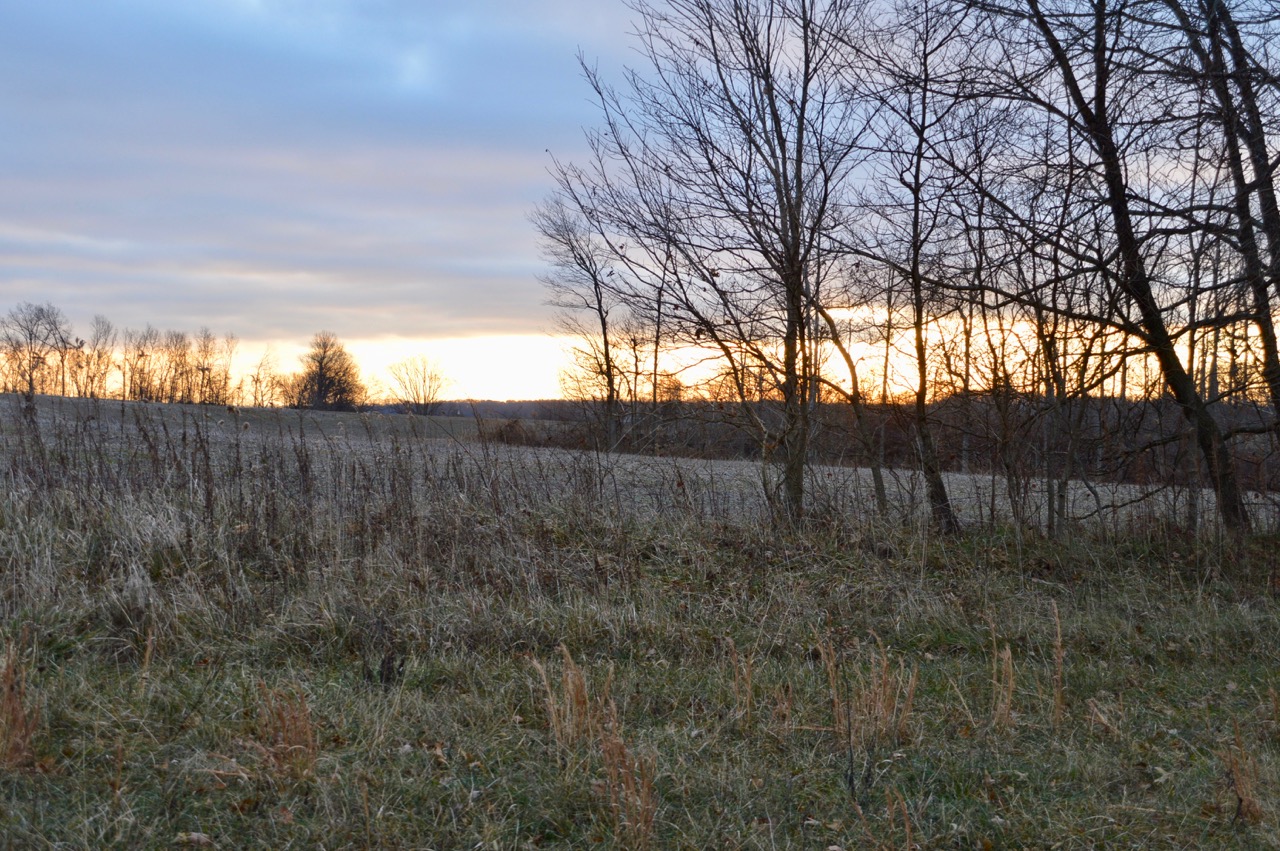 I am not sure what is going on with my pictures this morning, with being a little out of focus at times. It's hard to imagine that my hands are that unsteady when I hold the camera. Anyway, you can see the sun had not been up that long this morning when we took the first walk of the day. 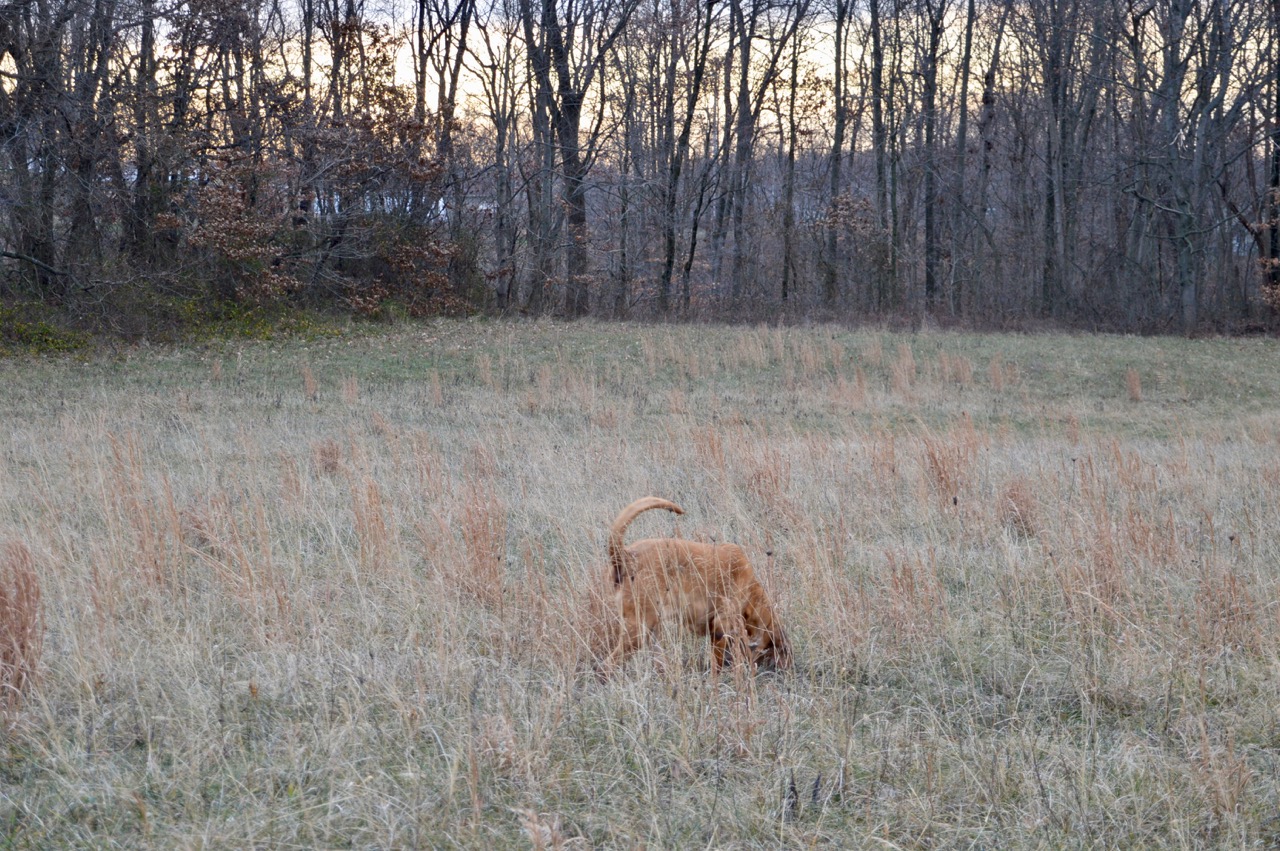 Sadie continued her torrid pace exploring as much of the field as possible. 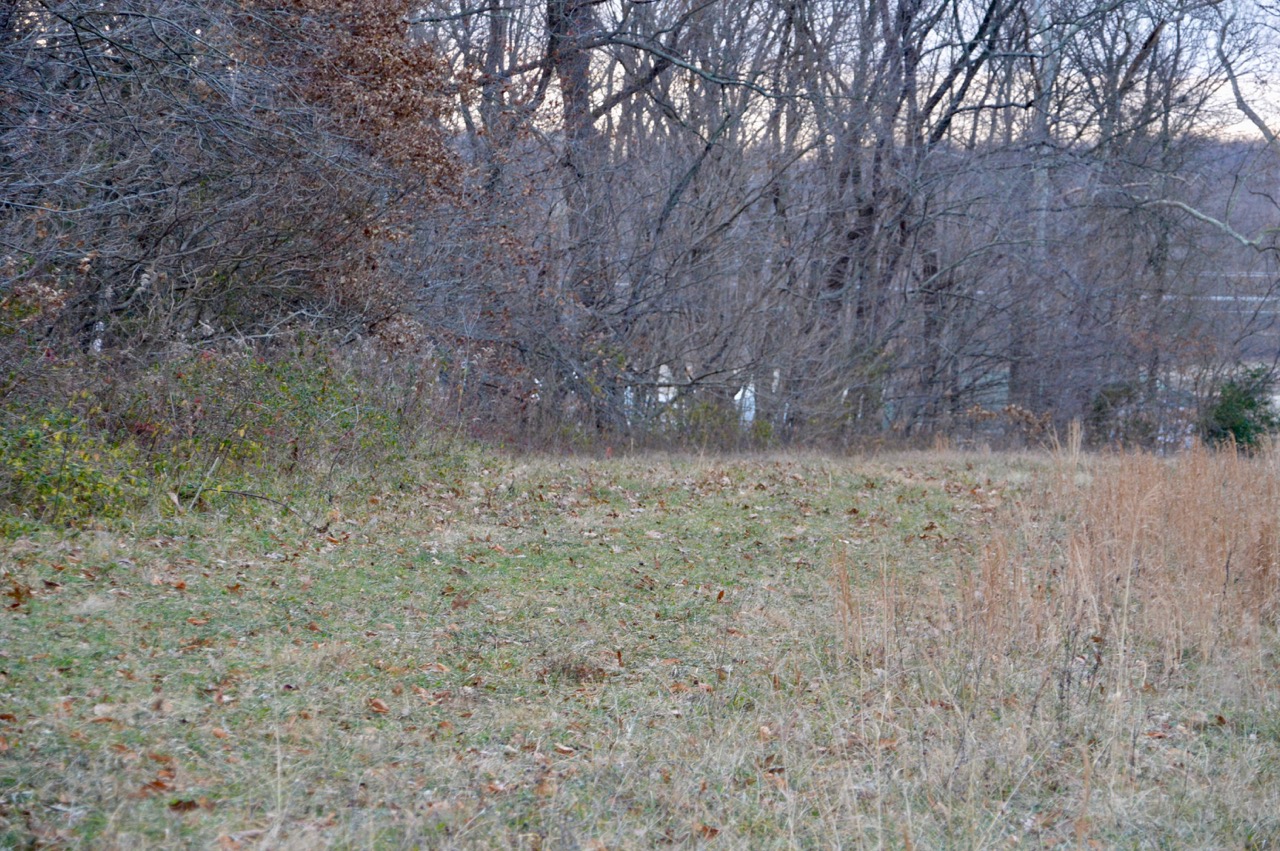 Just as I expected, as I passed the first corner on my way back ... Stella was nowhere to be seen. Based on the part of the woods she walked out of the other day I decided I would walk into the woods in the same spot. 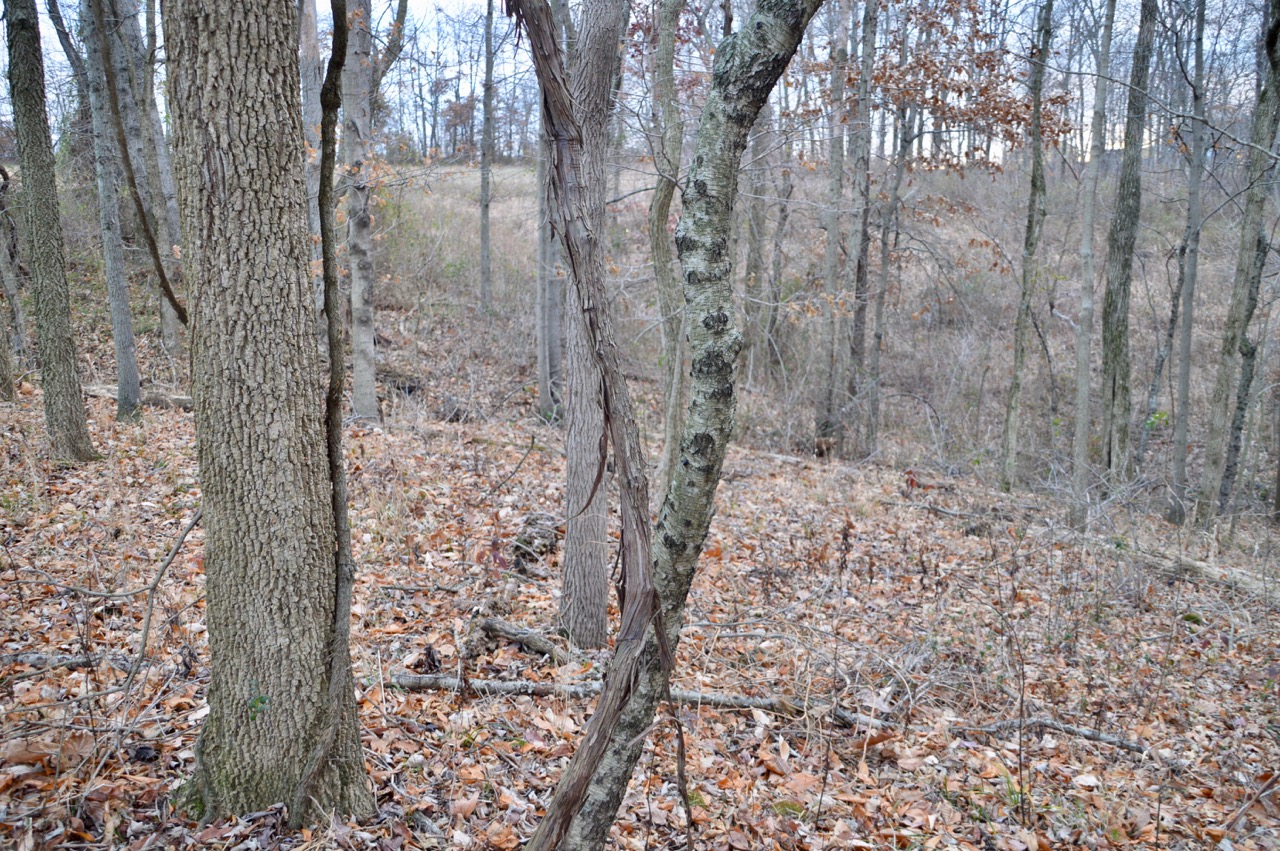 As you can see as I looked down into the gully, looking left and right ... no sign of any red bloodhound. How can she disappear just like that and not be seen? 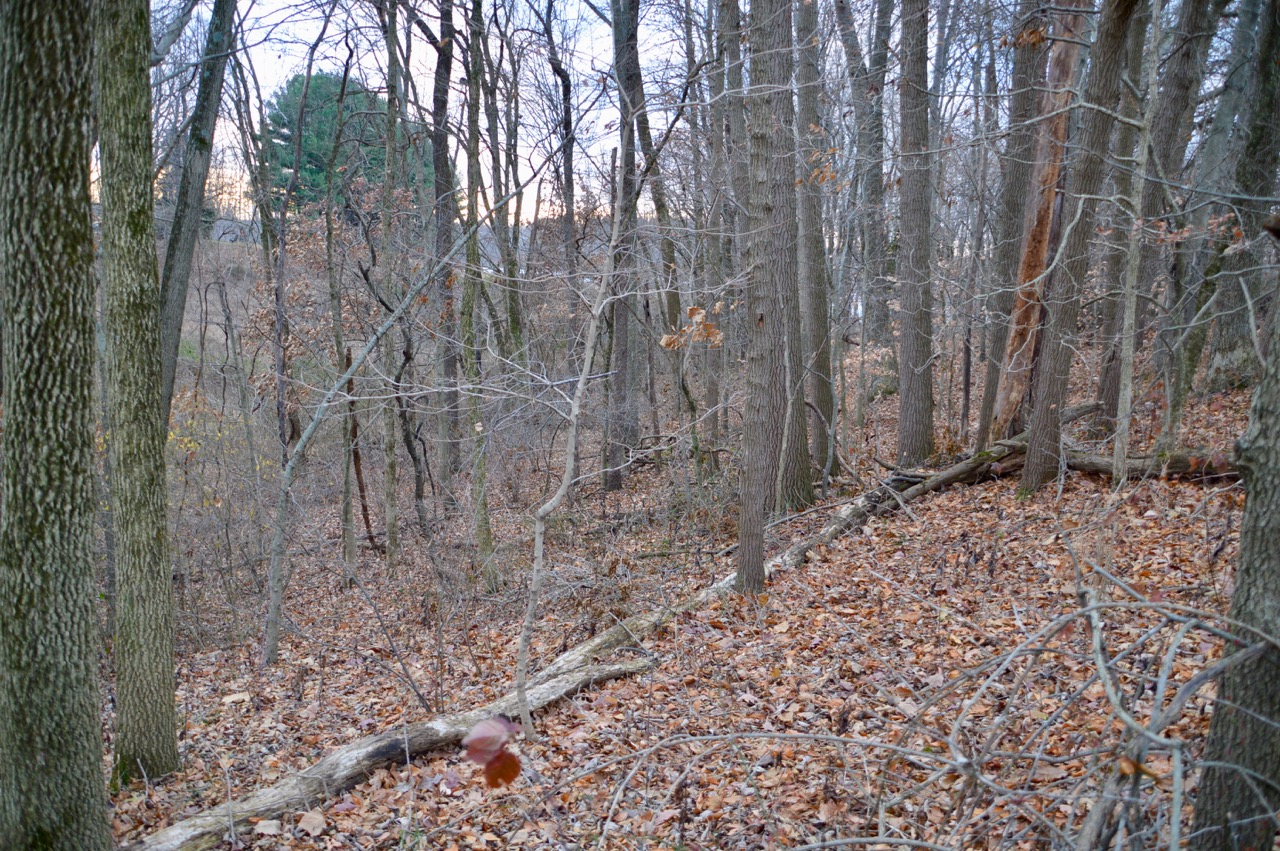 I still continued to yell her name, thinking I would see her moving among the trees and along that big bank of dead leaves. But ... nothing. 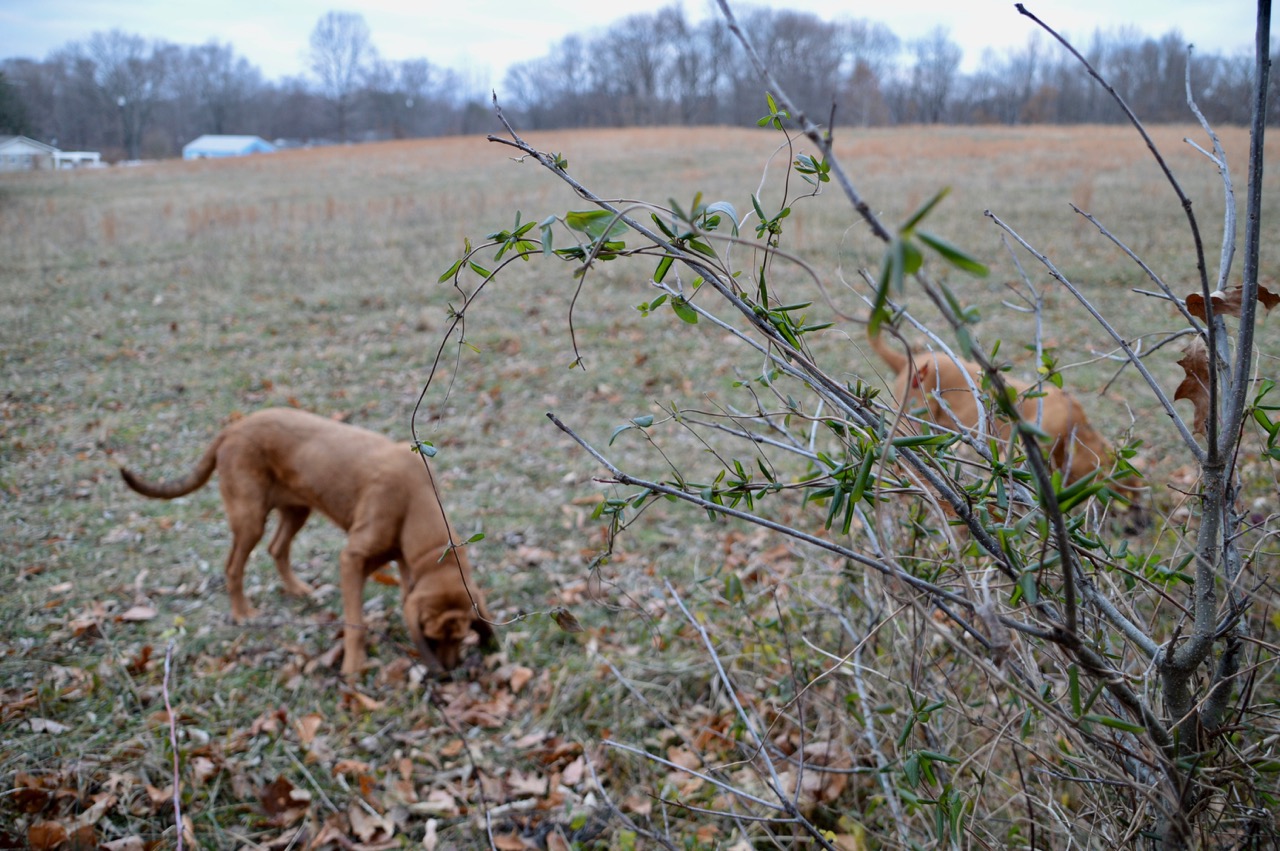 As I was walking back out into the field, there she was acting as if she had never gone anywhere and was there the whole time. Once she saw me, she started wagging her tail and trotted toward the house with Sadie following. I'm glad it was only a few minutes before she showed up. It was too cold just to leave her outside alone. 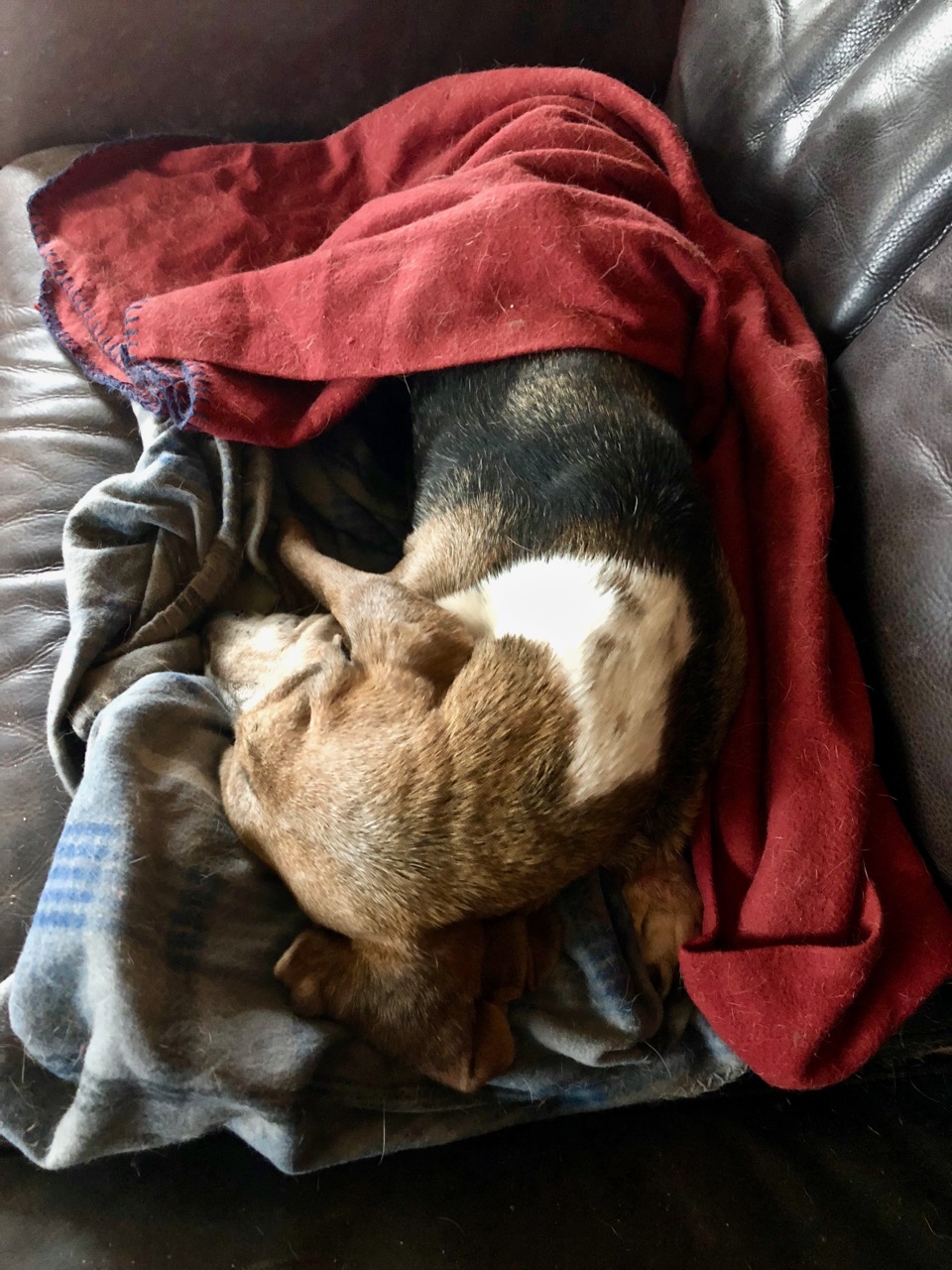 When we came back inside I wasn't sure that Heidi was even going to get up for lunch. This is her way of beating the winter cold. She set's all time records in that position for never moving. For some reason this year, she has moved from the bed to the couch for her all-day sleeping marathons. 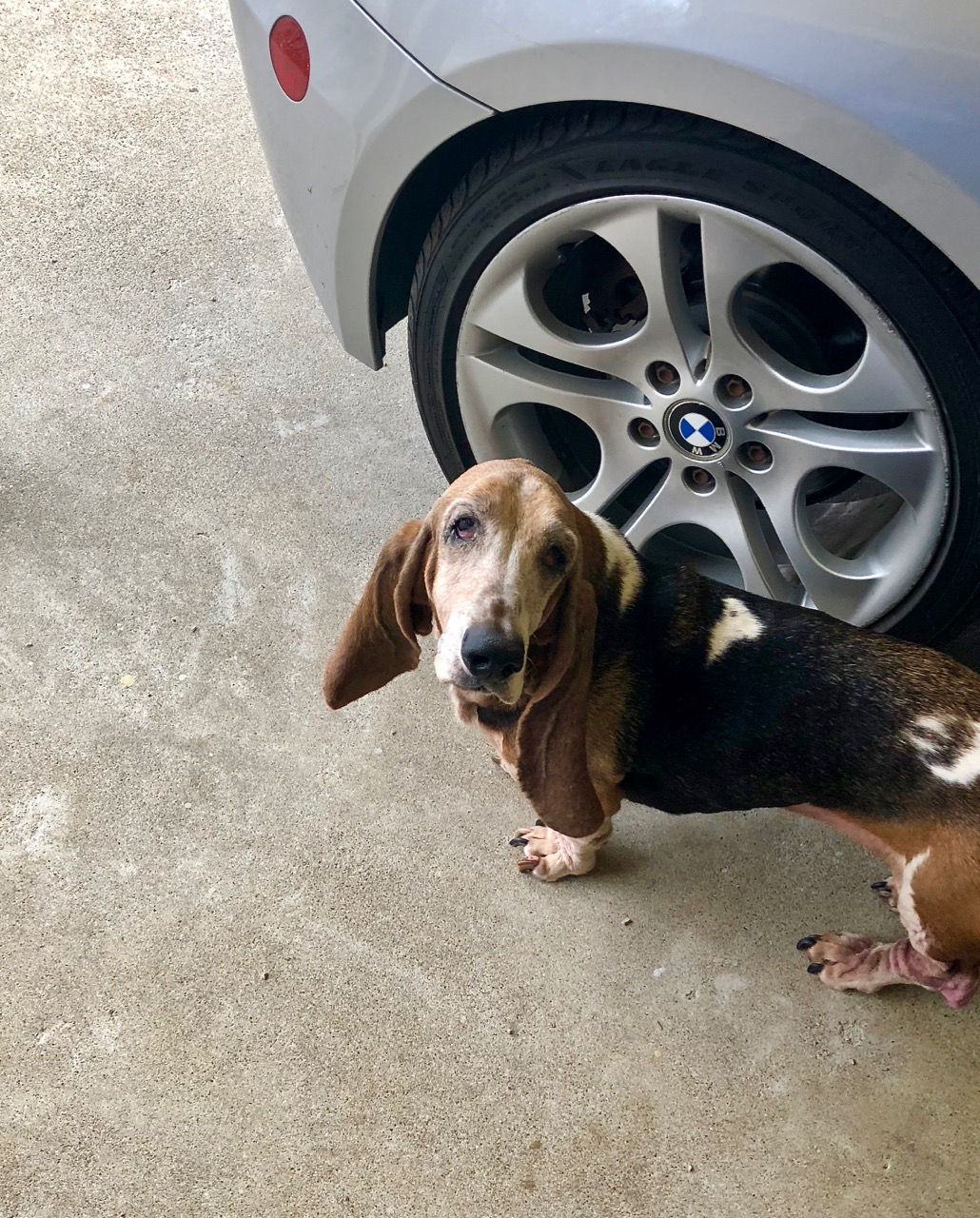 All it took was a few hours to pass and hearing Stella howling for lunch, that she raised her head, jumped off the couch and came sprinting to spot I set her dish of kibble. She posed for the second day in a row for the new phone camera but didn't stay out long in the temps like they are today. 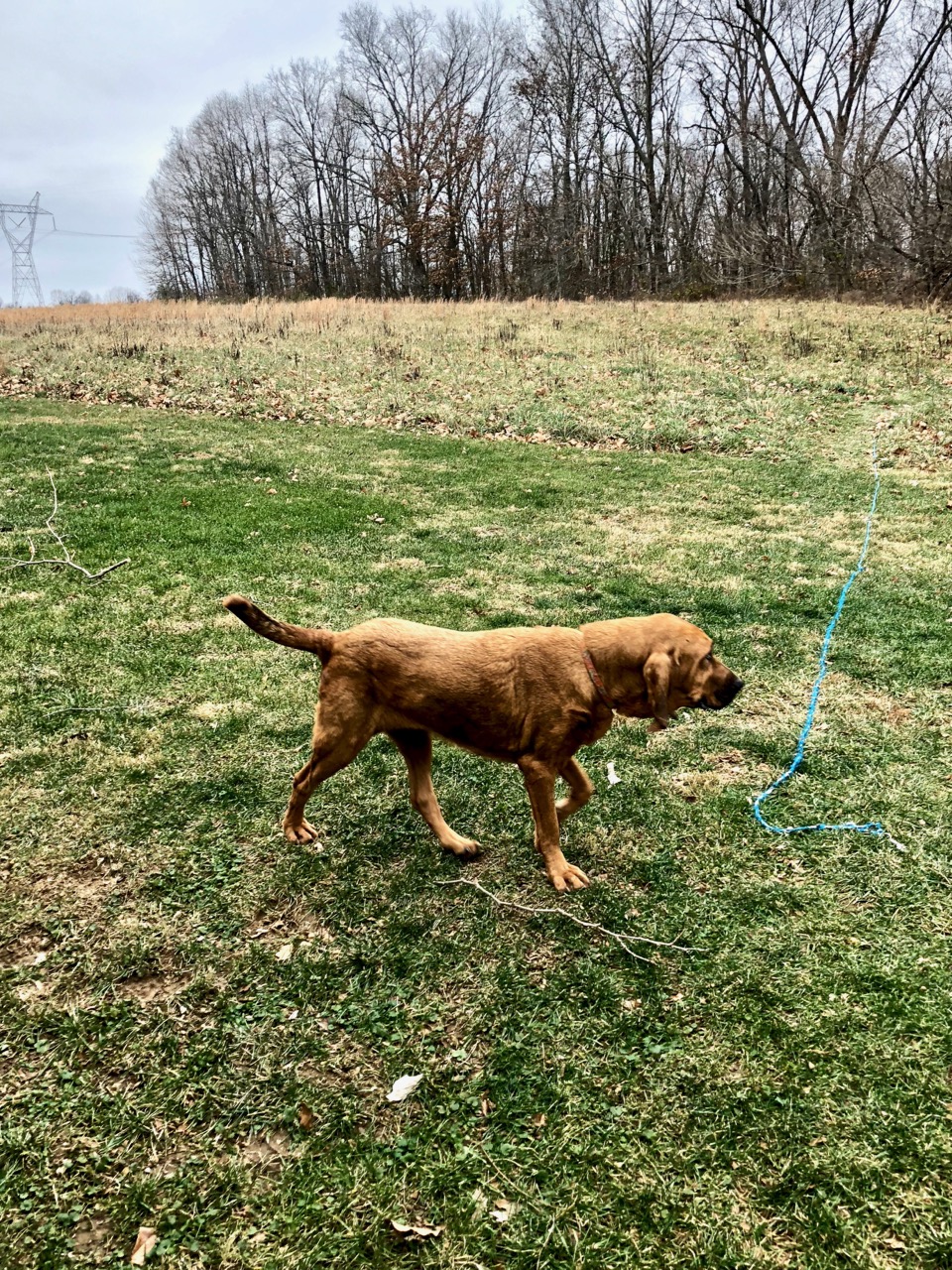 I am reading online today on how to take the best iPhone 8 Plus photos. That research covers improving the texture of a photo like the one above or the zoom photos I have tried to take. I have a feeling it is more user error than anything. 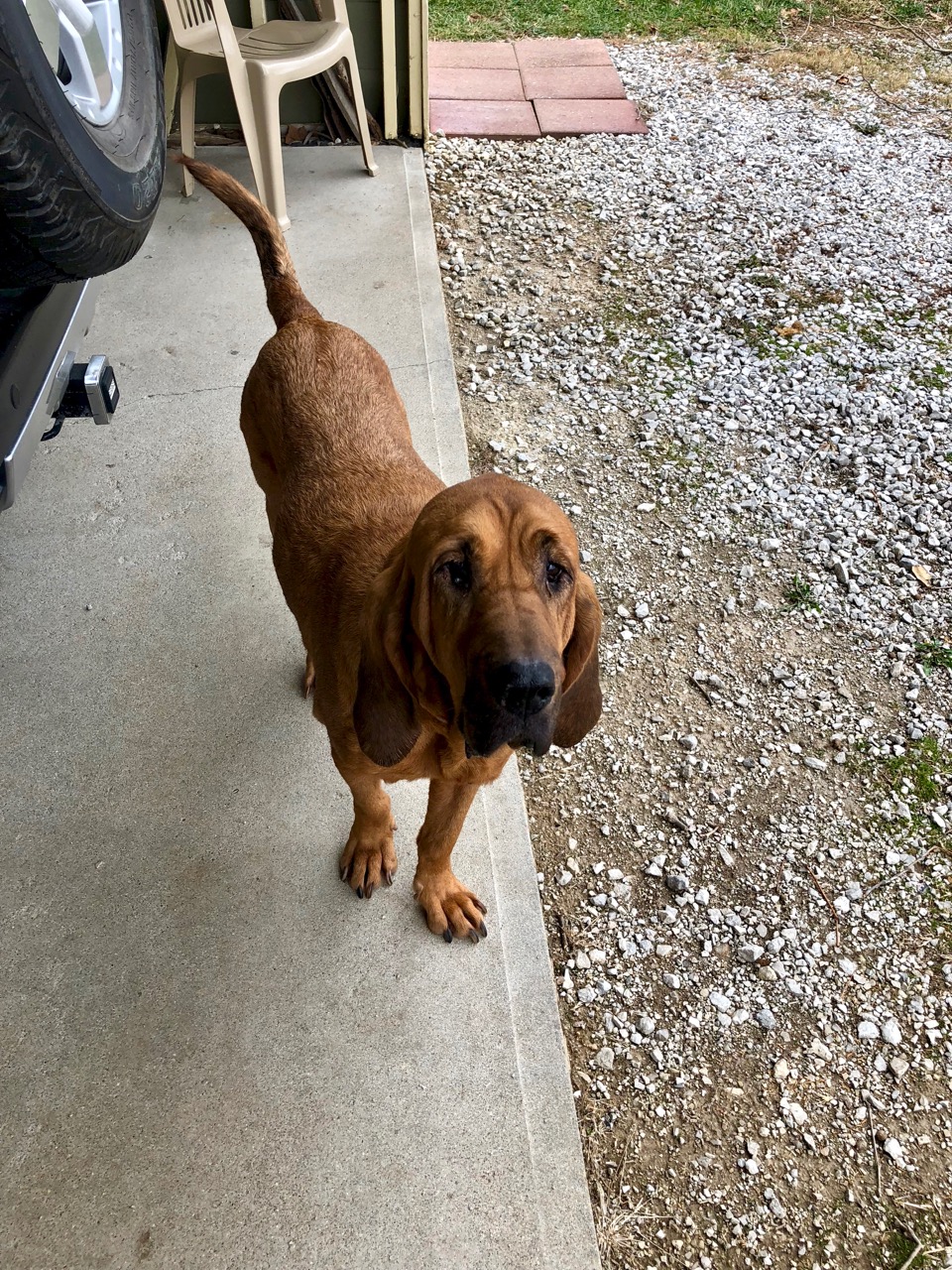 Stella wanted me to ask, if you were to look into those eyes would you even imagine that I can destroy a room if left too long along with Sadie or that I can disappear in a matter of seconds and never seen nor heard? 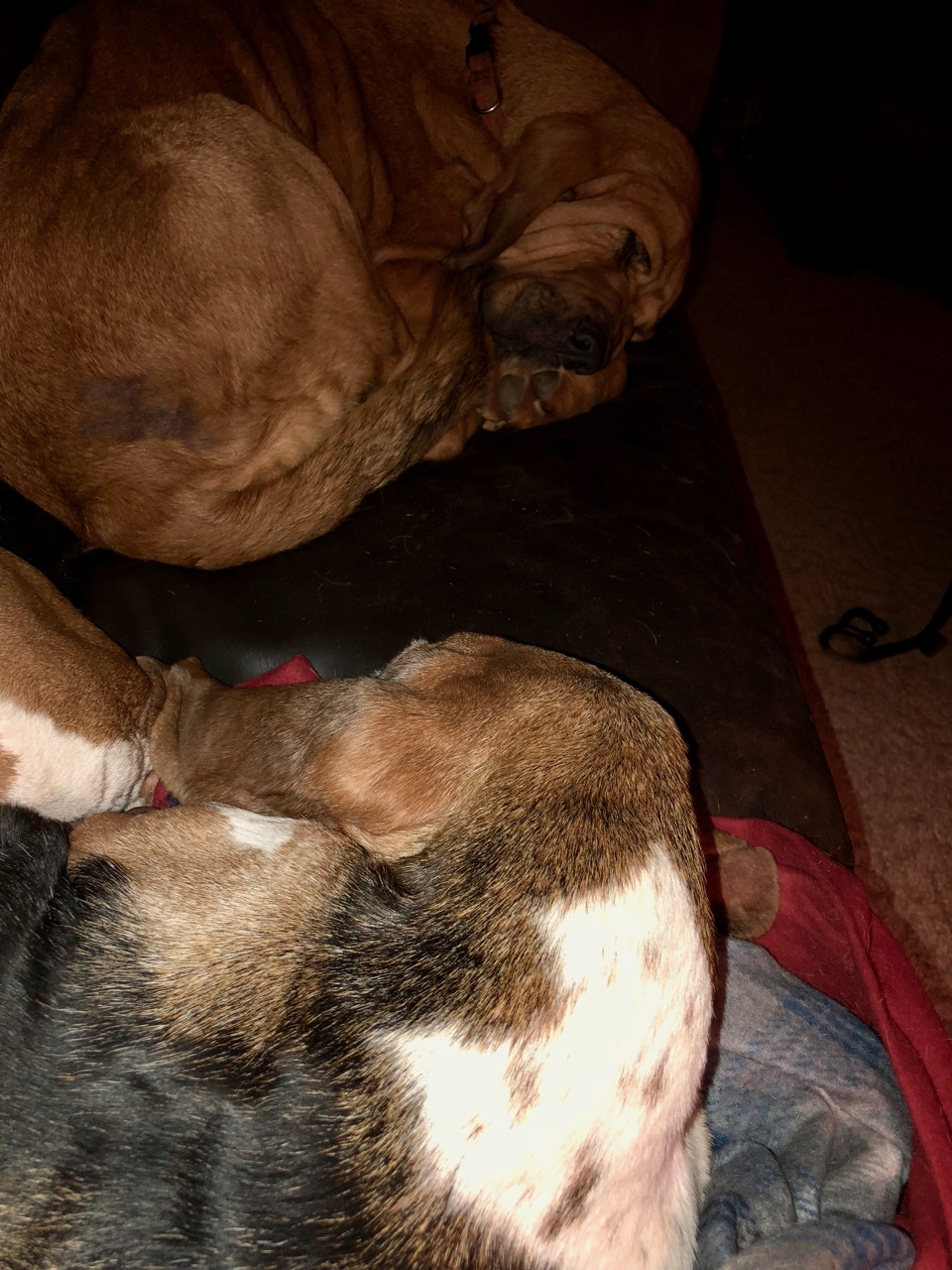 This is the normal position for Sadie and Stella every night whether I am on the couch or not.

There were two things I wanted to get accomplished today. I wanted to find a way where my Garmin VivoSmart 3 would synchronize with the  new phone. I had tried every suggestion on the internet, Garmin forum, Apple forum and MacRumors forum without any success. I was about to write it off as a lost cause and forget about it.

Then I decided I could see the same information the watch collected during the day and downloaded into Google Connect on the phone or to Garmin Express on my computer. Evidently months ago when I stopped using the Express I deleted it and today I had to reinstall the program. That put me in a mode to reload my Garmin VivoSmart2 as if it was a new device.

As expected all of the data automatically downloaded to my computer as soon as the watch was recognized. Out of curiosity I picked up the phone and tapped the Garmin Connect icon and within seconds it dowloaded all the data as if the watch had never been disconnected.

So the first goal of the day was reached.

I am now at the stage of wanting to know more on how to take better photos with the phone, so while the wind is howling freezing air outside I am inside searching and reading information where I can tweak the zoomed photos to make them better, etc. I did find out that Apple uses a file named .heic instead of .jpg for photos taken after their iOS11 update.

Same quality but that .heic format will take up less space to store your photos. For those of you that have Apple phones and Windows PC computers, you will have to get a free converter downloaded so you can work with your photos taken with an Apple phone.

I did find out I was using the zoom wrong and the reason a lot of my zoomed photos were blurry.

We ended the freezing day with a walk a little after 3pm without the phone or Nikon. It wasn't any warmer this afternoon than it was early this morning. It might be time for a short siesta like the hounds take every afternoon.

Another week is about over here in 'the tropics' of Southern Indiana.
at December 07, 2017