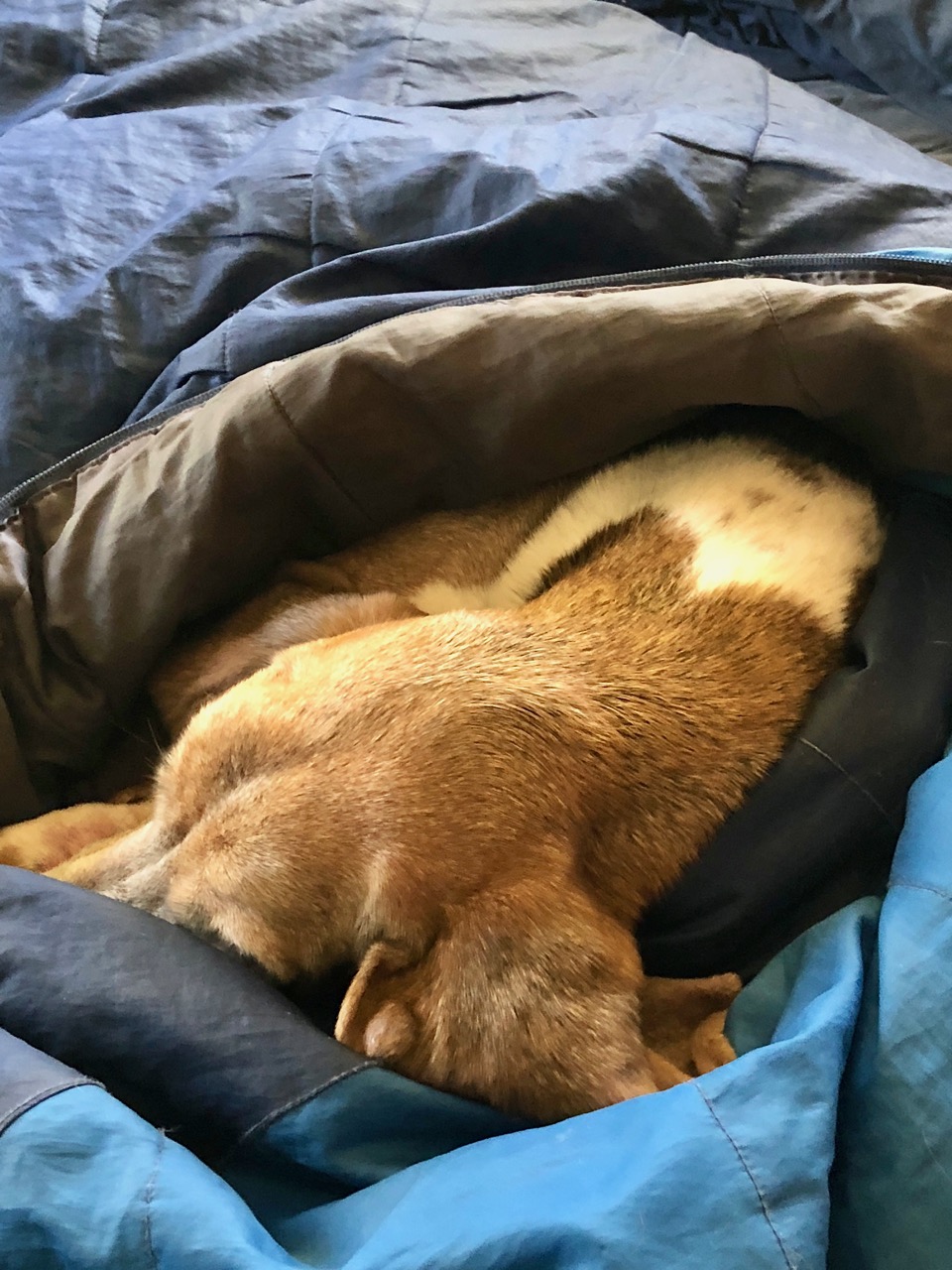 It's nothing out of the ordinary for Heidi. I've seen it for 6 winters now. She moves into the deeper winter hibernation as the temps get colder outside. It's like those hibernations you read about bears. Probably the only difference is, she gets fed 2x per day and she is the most active before and after those meals. Today was no different with a wind chill of 14° outside at 10am ... it wasn't even close to her temperature threshold of 70° 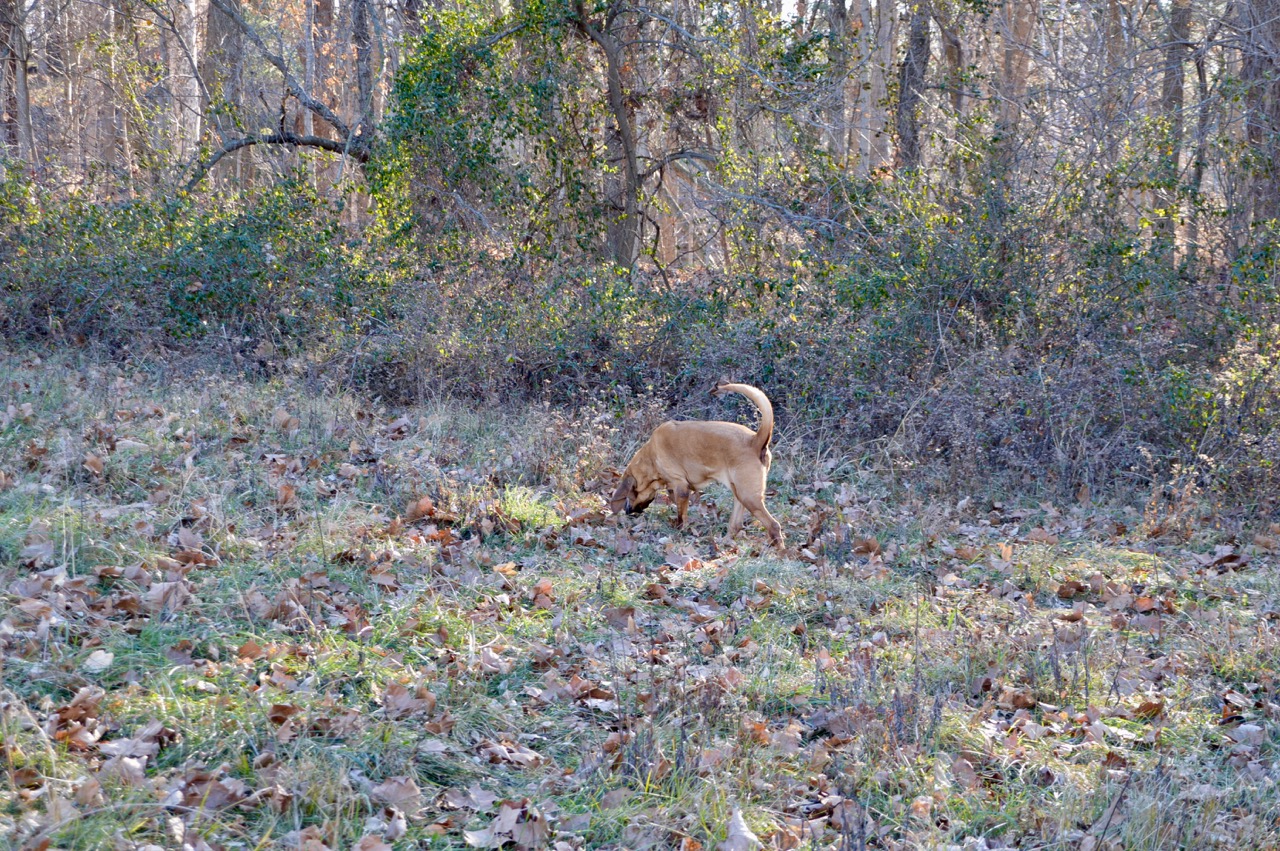 Sadie wanted to go out as soon as her 60 seconds or less breakfast was over. It didn't matter that she had just been outside right before it was served. I am not sure, as some have suggested over the years, that she would be a hound that would enjoy staying outside 24/7. She is pretty addicted to 'her' large leather chair and ottoman. It's a place she spends every night while movies or ballgames are on the tv. 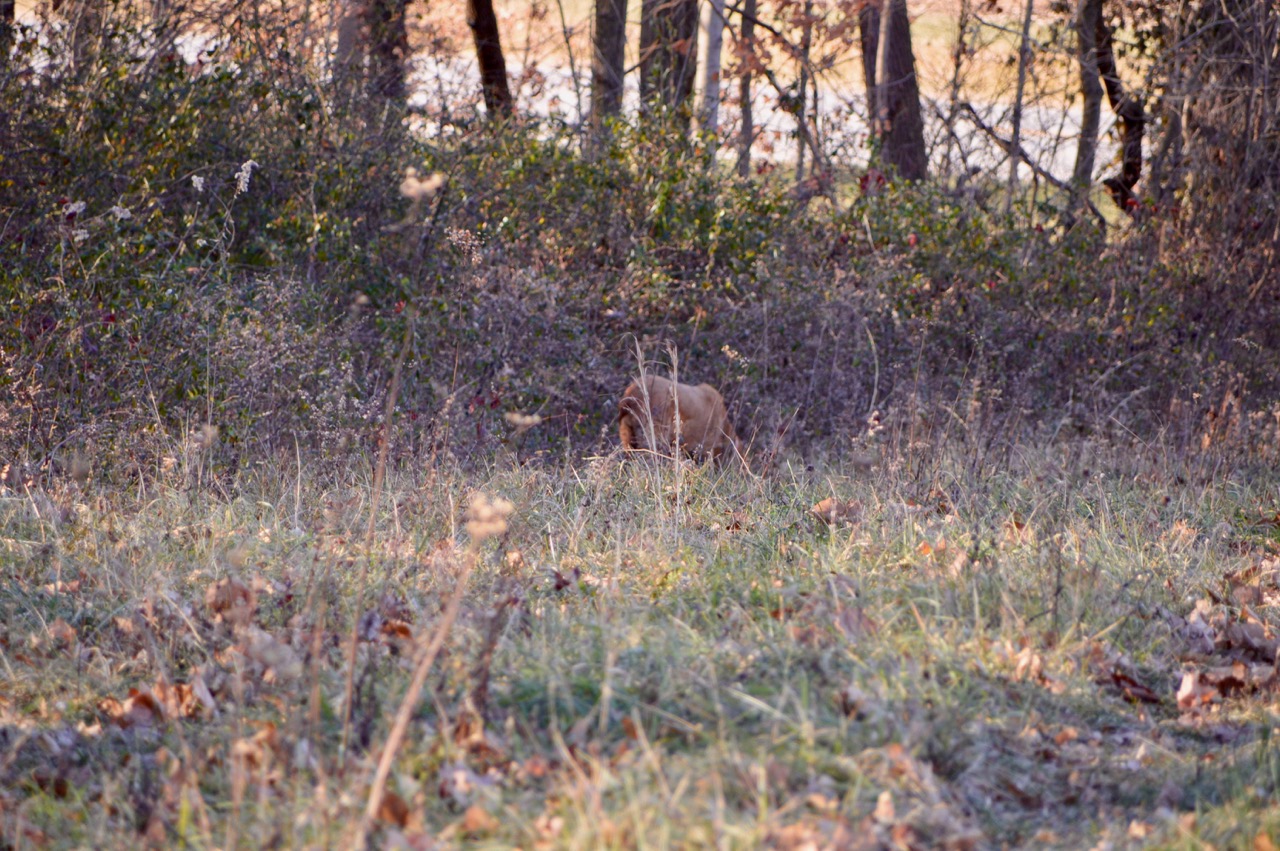 Stella let me know very early in the walk today she wasn't interested in covering much ground. Sadie and I continued on knowing we could pick her up on the way back, hopefully somewhere within view. 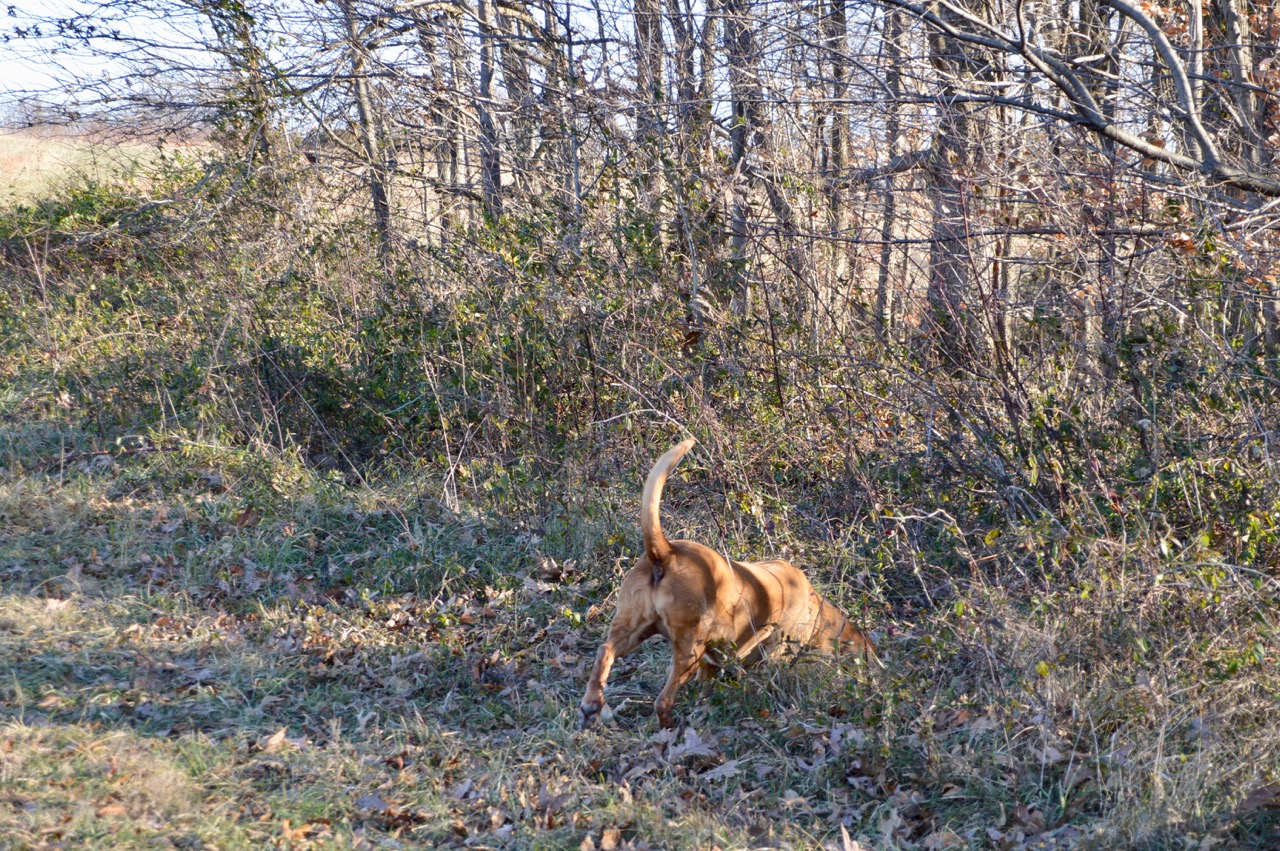 Since buying the new iPhone my Garmin Connect app is working off and on. More off than on. From reading on both the Apple sites and Garmin site, it seems to have started with Apples update to iOS11 a month or so ago. I am finding out I was one of the lucky once to have consistent connection on my iPhone 6s. I can still download the Garmin data to my iMac but it's really convenient to see everything with a 'tap' on the Garmin app on the iPhone. 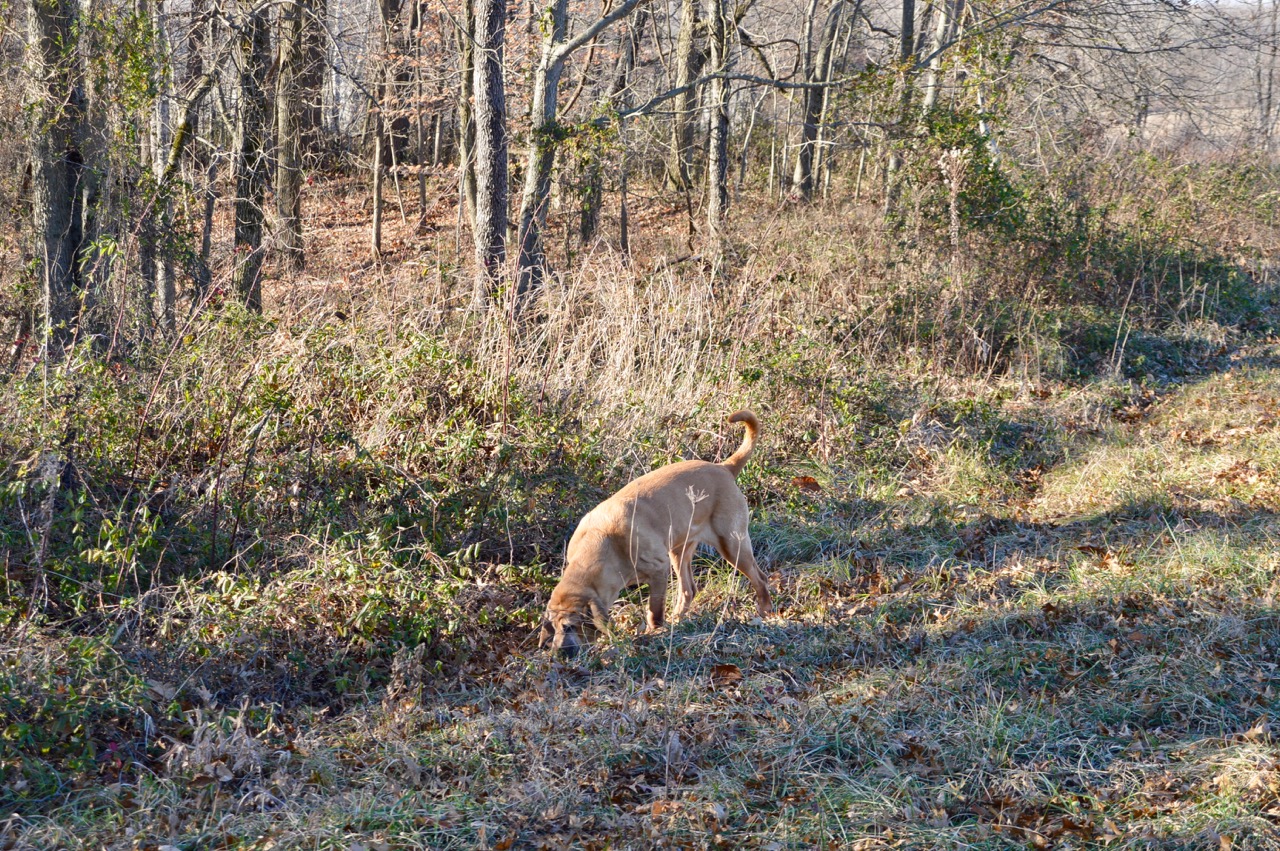 I said something in passing yesterday about possibly adding a page on top with nothing but photos of the 'ears in motion' of both bassets and bloodhounds. It looks like from the emails I have received, there is enough interest for me to make that happen. With it freezing and too cold to pick up sticks in the yard, this might be the day to do a little 'page building' and get all of those ear photos in their own page. I'll let you know when I am finished, or keep glancing at that row of pages on top of this blog. 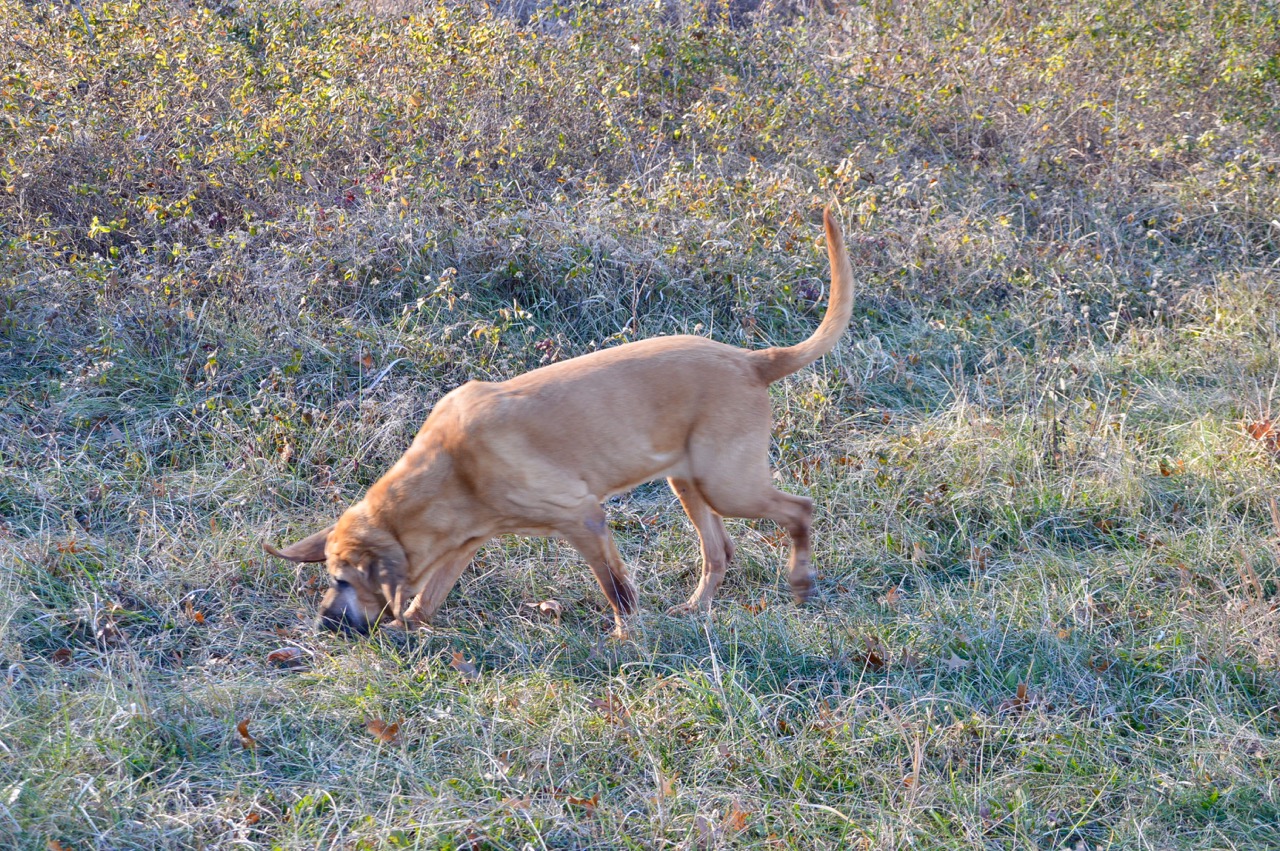 Giving Stella her daily morning massage that she requests by walking into the computer room and standing next to my desk chair, shows me that she is back to her normal self. She has gained all of the weight that she lost sometime last February thru March. Those two big knots that were visible on her hips are gone and have been for a while. She can handle a massage on her lower back and hips without yelping in pain. Plus seeing her sprinting full speed yesterday morning was a plus. 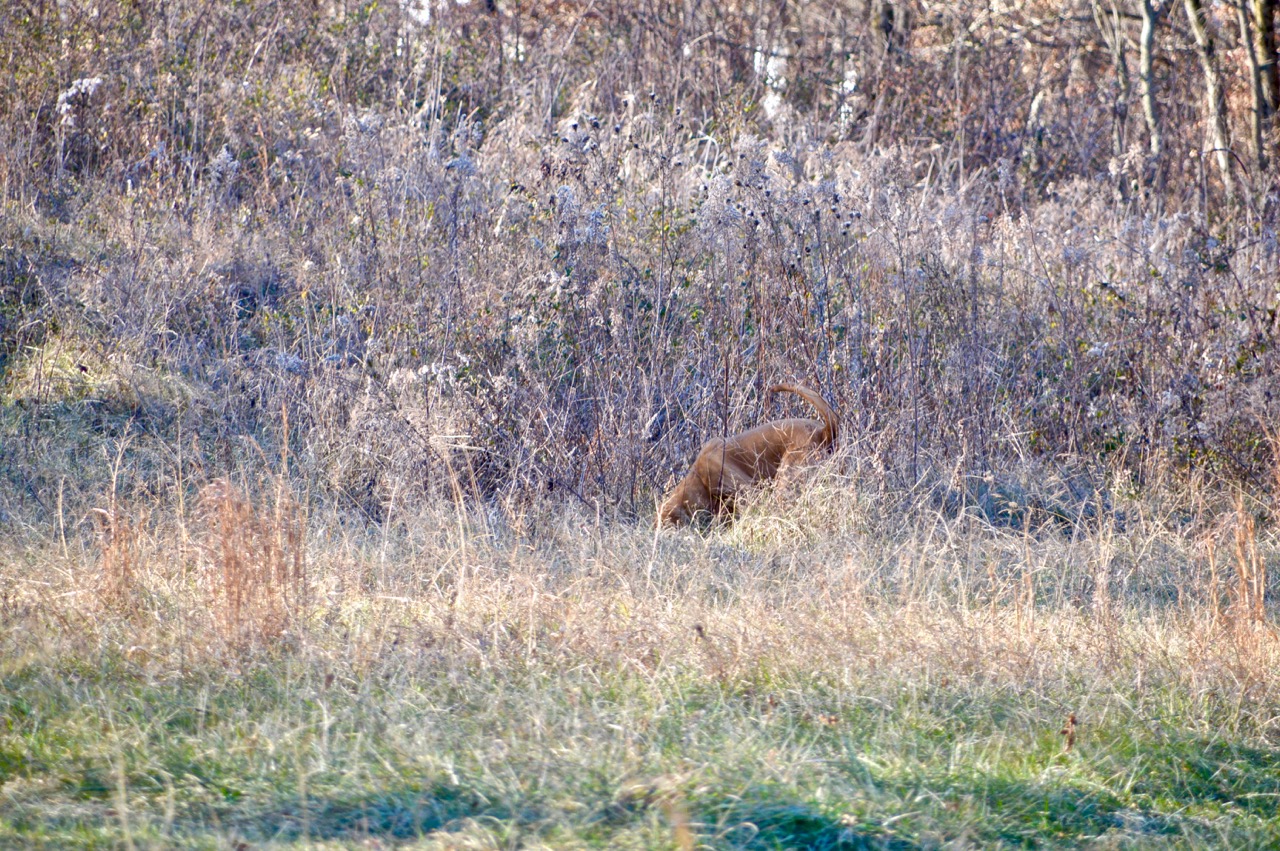 Sadie was back at the corner of the gully, just on the border of the far right corner of the field. This morning she was too fast for me and did her sprinting to catch up before I turned around to captured it with my camera. With it getting colder I had picked up the pace of my walk. We get most of our winds from the SW but like today, when that are out of the NW I can expect freezing cold air hitting my face. 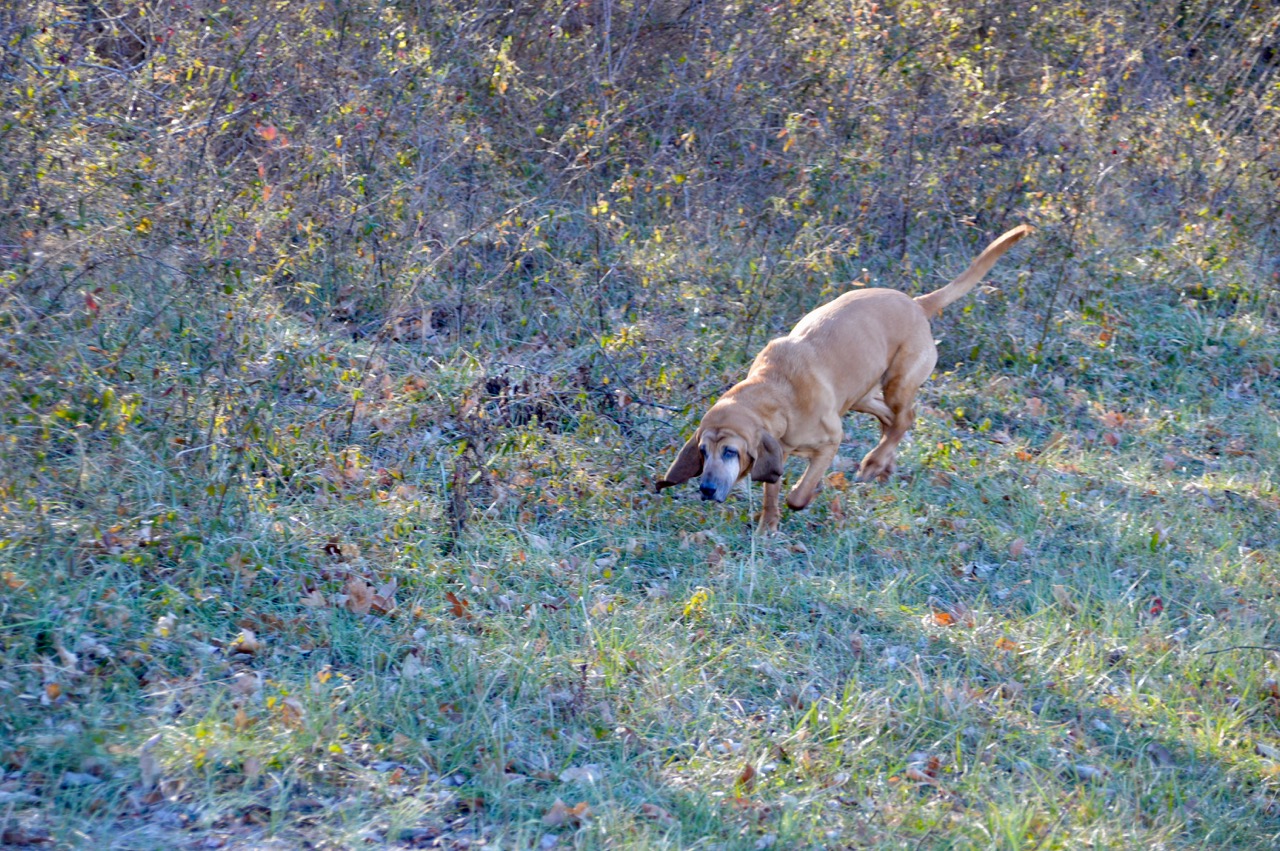 I don't get many visitors on my Wordpress blog but at times I enjoy that blog more than this one. It is simple and fast to put a blog post together. I imagine the Google and Bing bot crawlers don't care for the generic url name that comes with a free account, thus not many ways to generate traffic. It is interesting though that both blogs have their own audience, with very few viewers looking at both blogs. 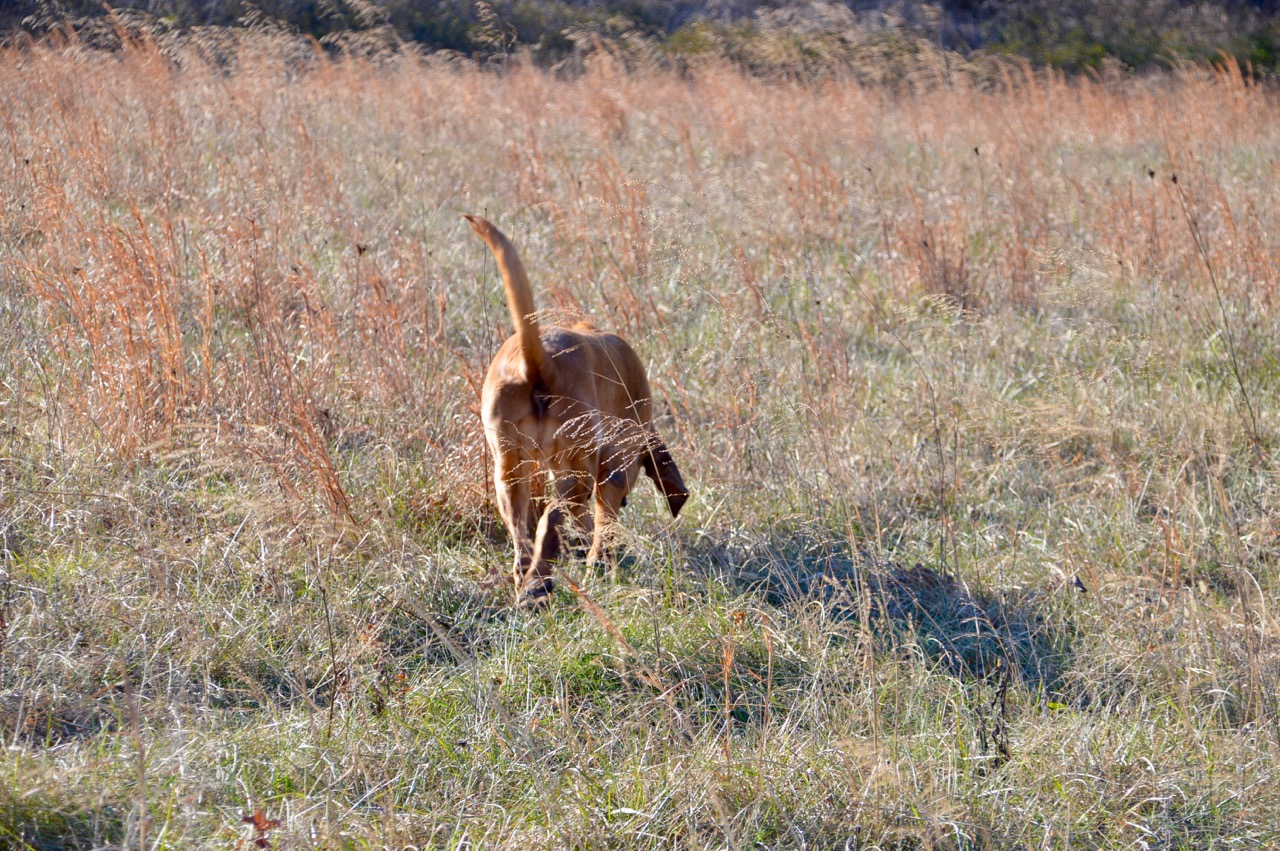 Sadie had locked onto a single worn path that is deer traffic. It has to be that since there isn't a second track parallel to it for it to be a truck or ATV track. Again this morning she was very active in her tracking. There isn't a walk she takes that tracking isn't her number one objective. 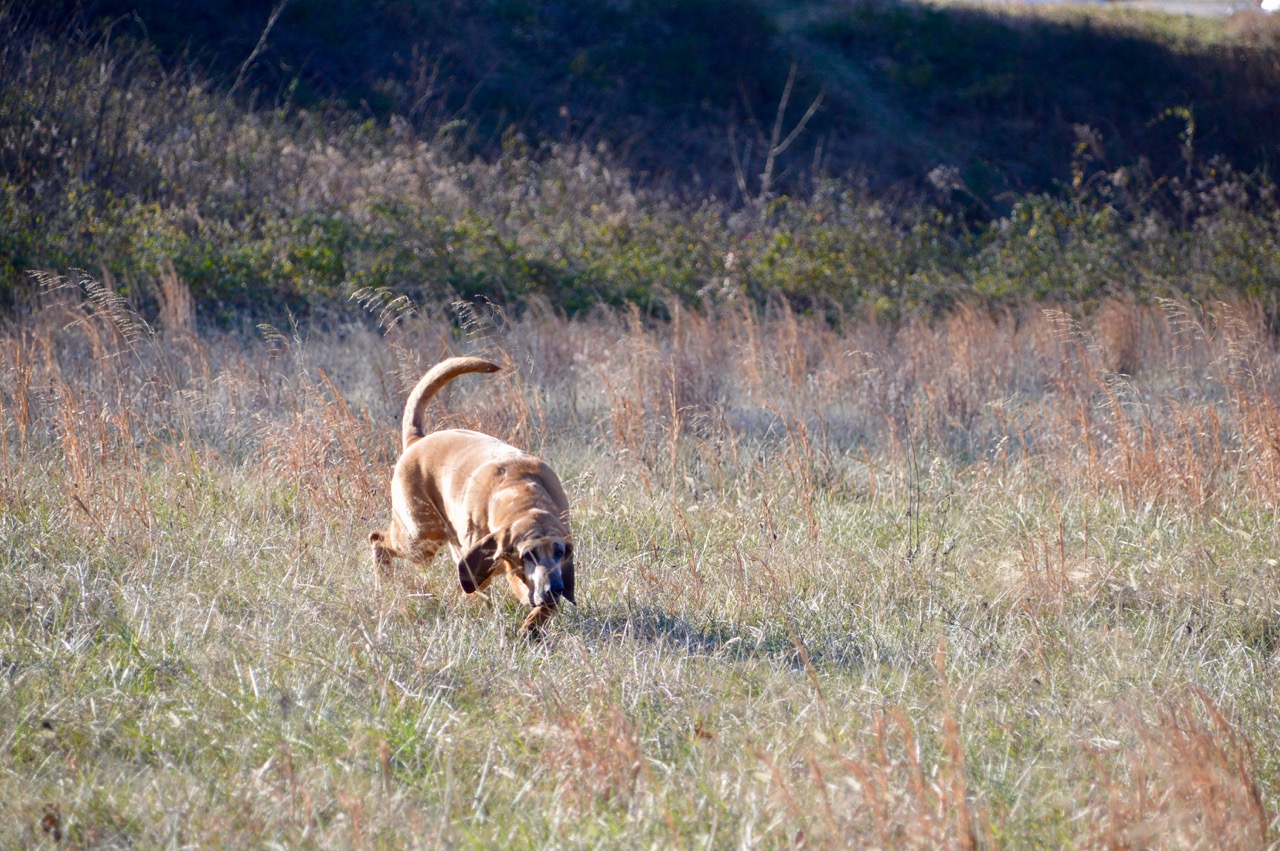 It's amazing to see how much ground she can cover with her nose near the ground. 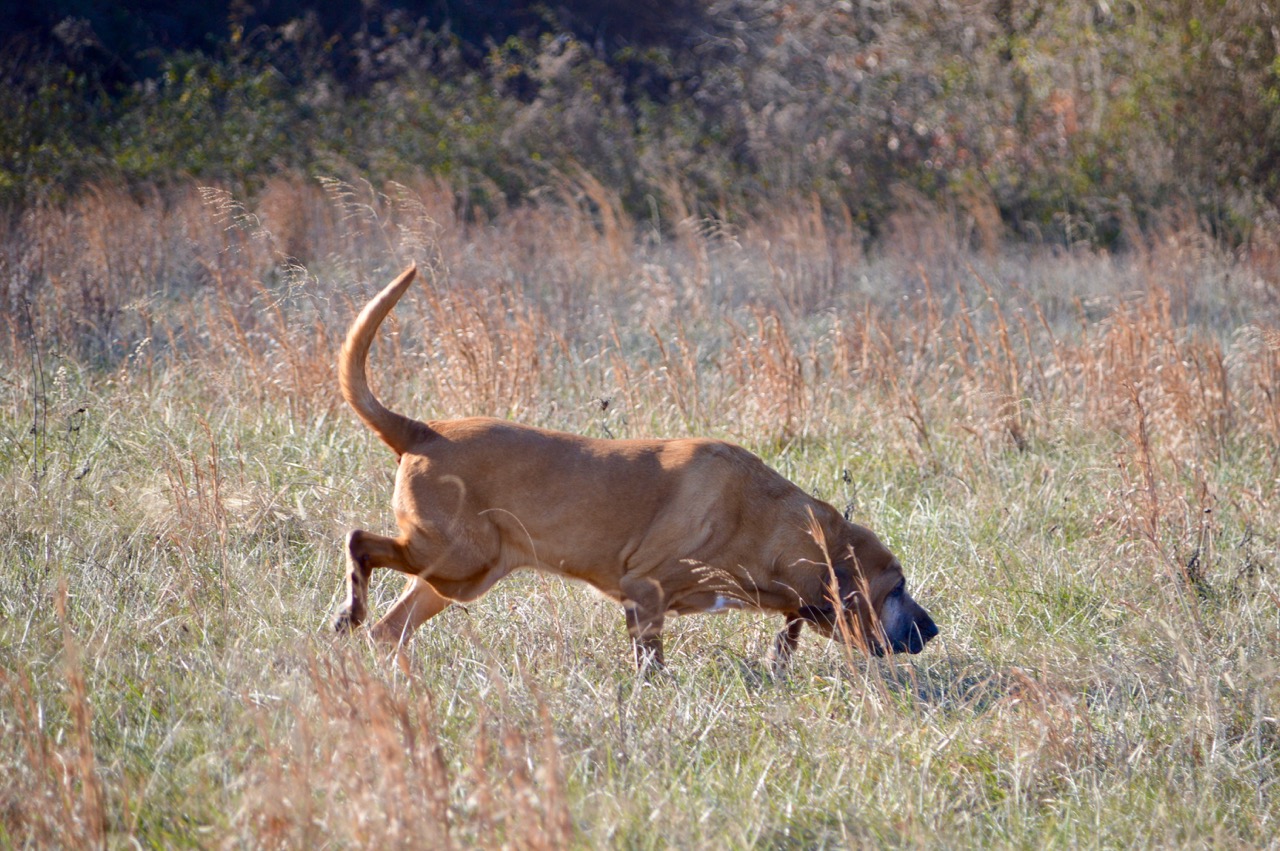 I would guess this is almost the perfect form for a tracking bloodhound. 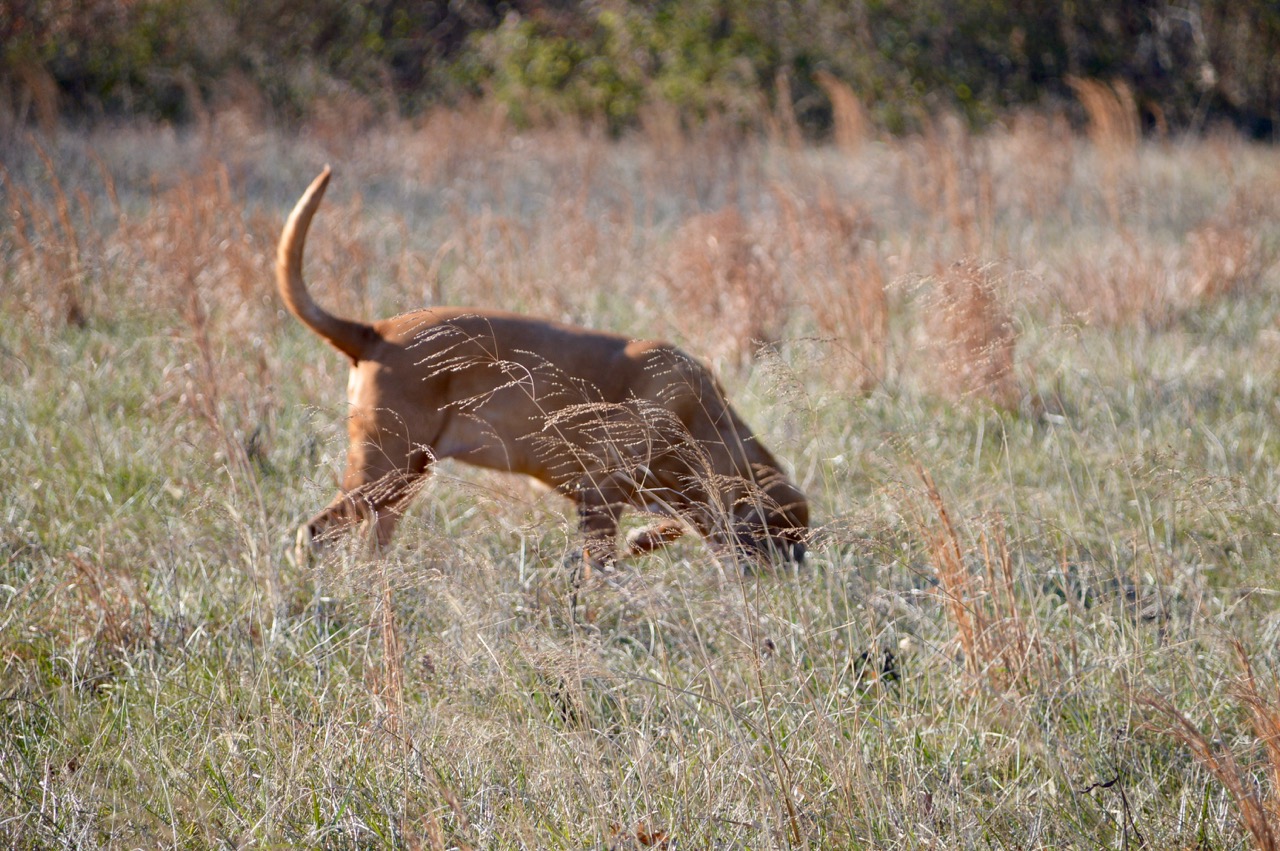 I almost forgot to mention I saw the field cat late last night. Really it was the eyes of the cat that my small camping flashlight picked up as I scanned the yard, field and along the backside of the house. While the hounds were doing their thing in the yard, I wanted to find out what I heard hit the house due to the high winds that were rattling the storm windows.

I was going to walk around to the front of the house, starting with scanning the area on the backside of the house. Right next to the NE corner of the house were two small eyes staring back at me when the flashlight moved to that area. The cat was gone within seconds and with the hounds on the opposite side of the yard they saw nor smelled anything. 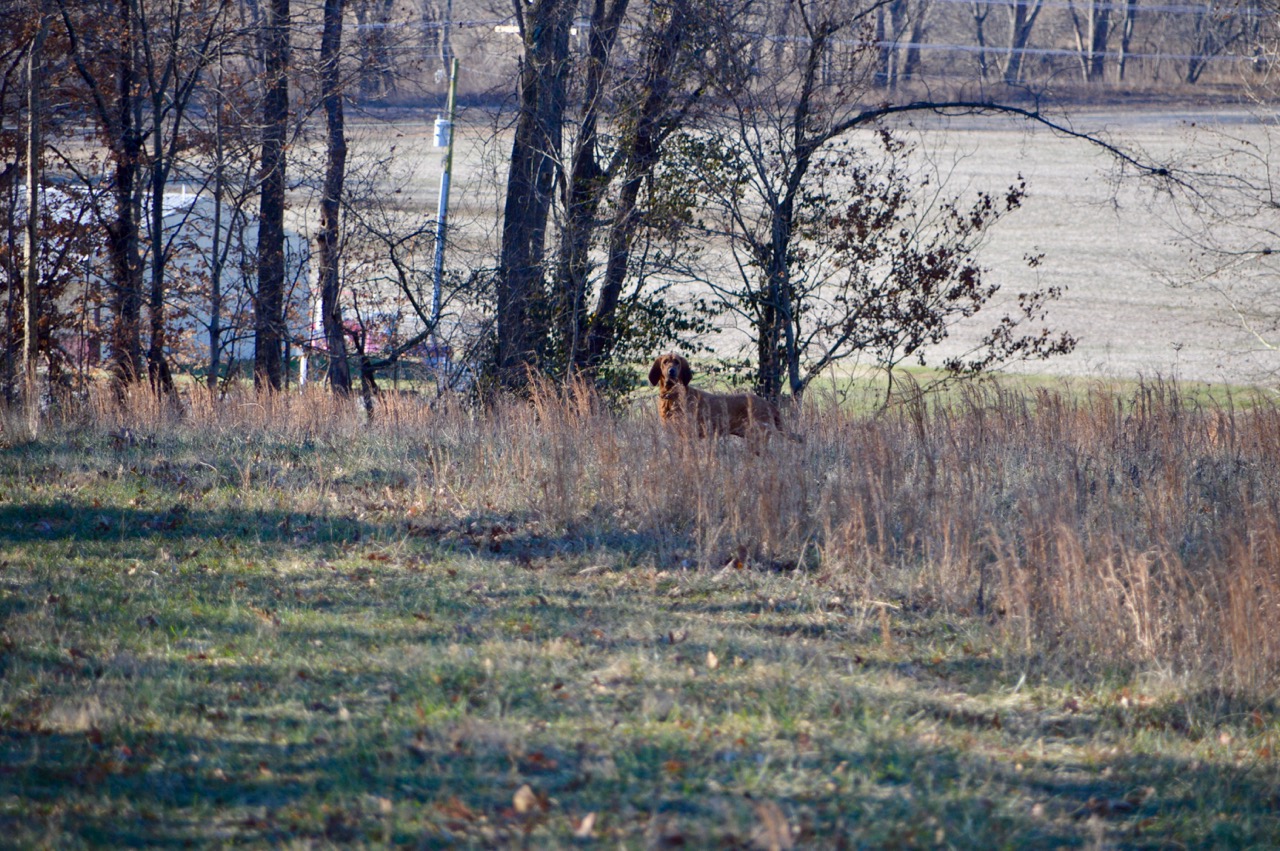 It took 200mm zoom to see this, but Stella did hear me calling her name on our way back. She hears me when she wants to I guess. 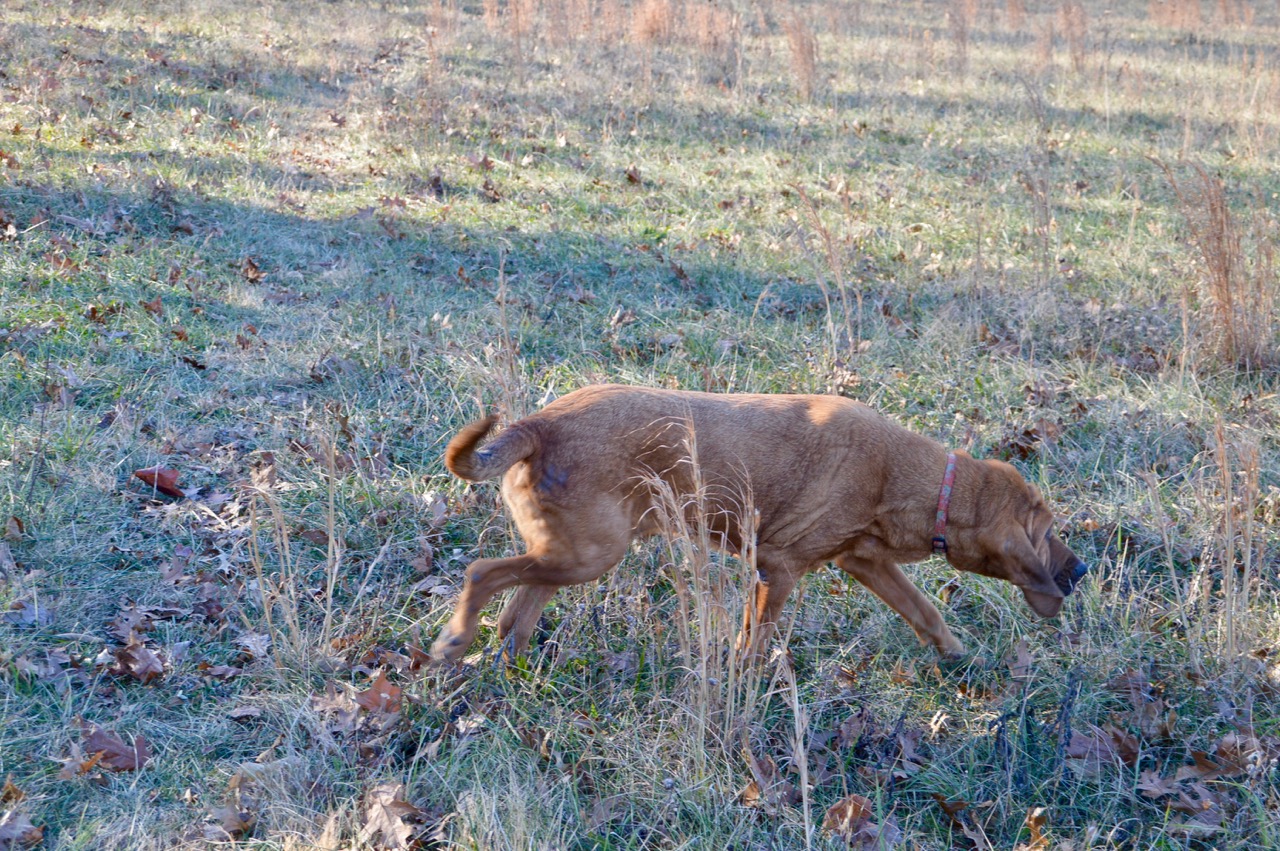 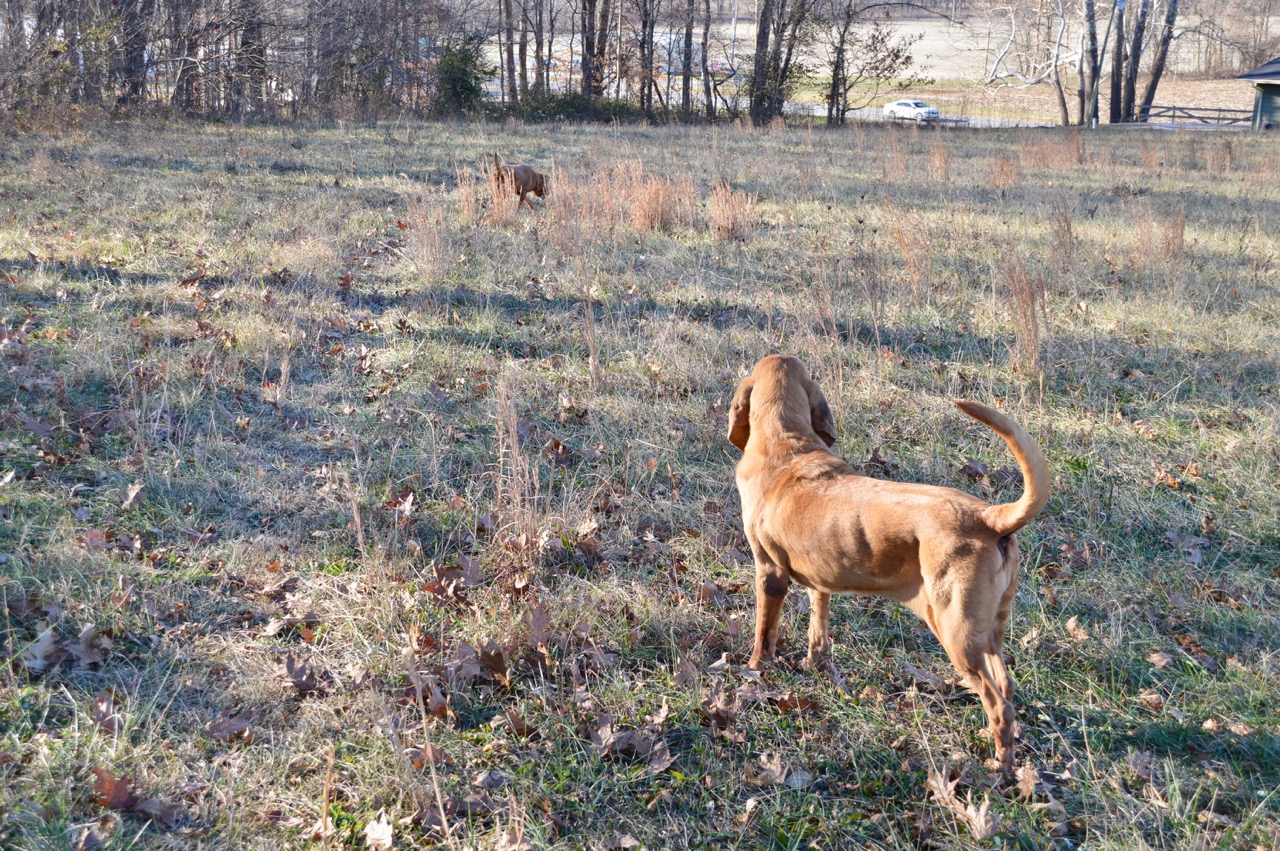 Maybe the freezing temps were making Stella a little more motivated this morning to get back home since she was leading Sadie and I in that direction. She is usually behind us, not in front of us. 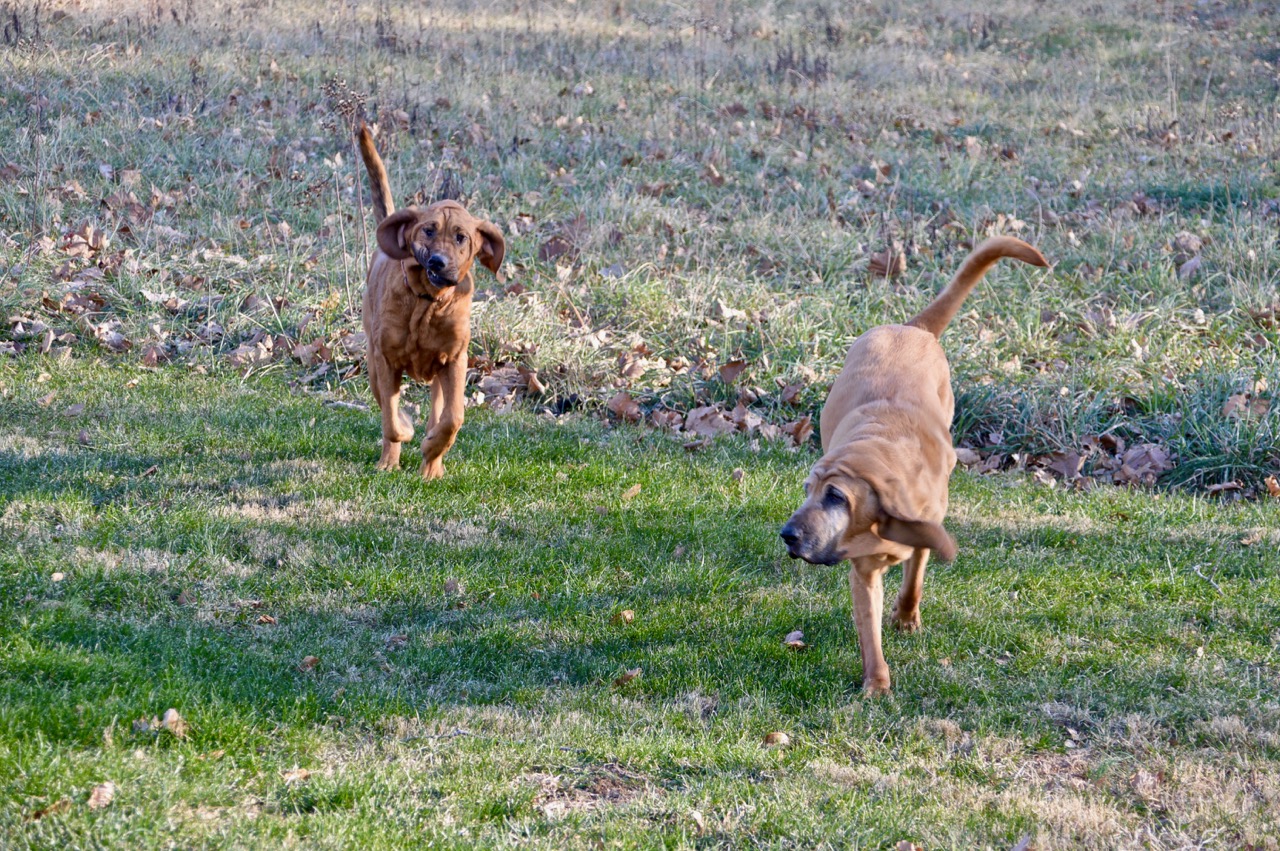 A rare sprint to the house to complete the walk.

In the meantime, Heidi never knew we left the house.

Not much is planned again today. I did take the Z4 out Sunday around noon. It doesn't mind the cold weather as long as the roads are dry and the sunshine is out. It has a great heater. The front lower grill I replaced along with the other air ducts and plates under the car, are still tighter than tight.

I am feeling my annual winter urge to start my book reading marathons. I still have a lot of them on my bookshelves to read for the first time. I might also build up a free library of ebooks to read on my table or phone. Either way, it's going to be a winter full of book reading.

It's another fine day of retirement here in 'the tropics' of Southern Indiana, with college football bowl games starting on December 16th. In the meantime the College Football D1-AA playoffs will keep me occupied.
at December 12, 2017