Stella's Back Under Control Today 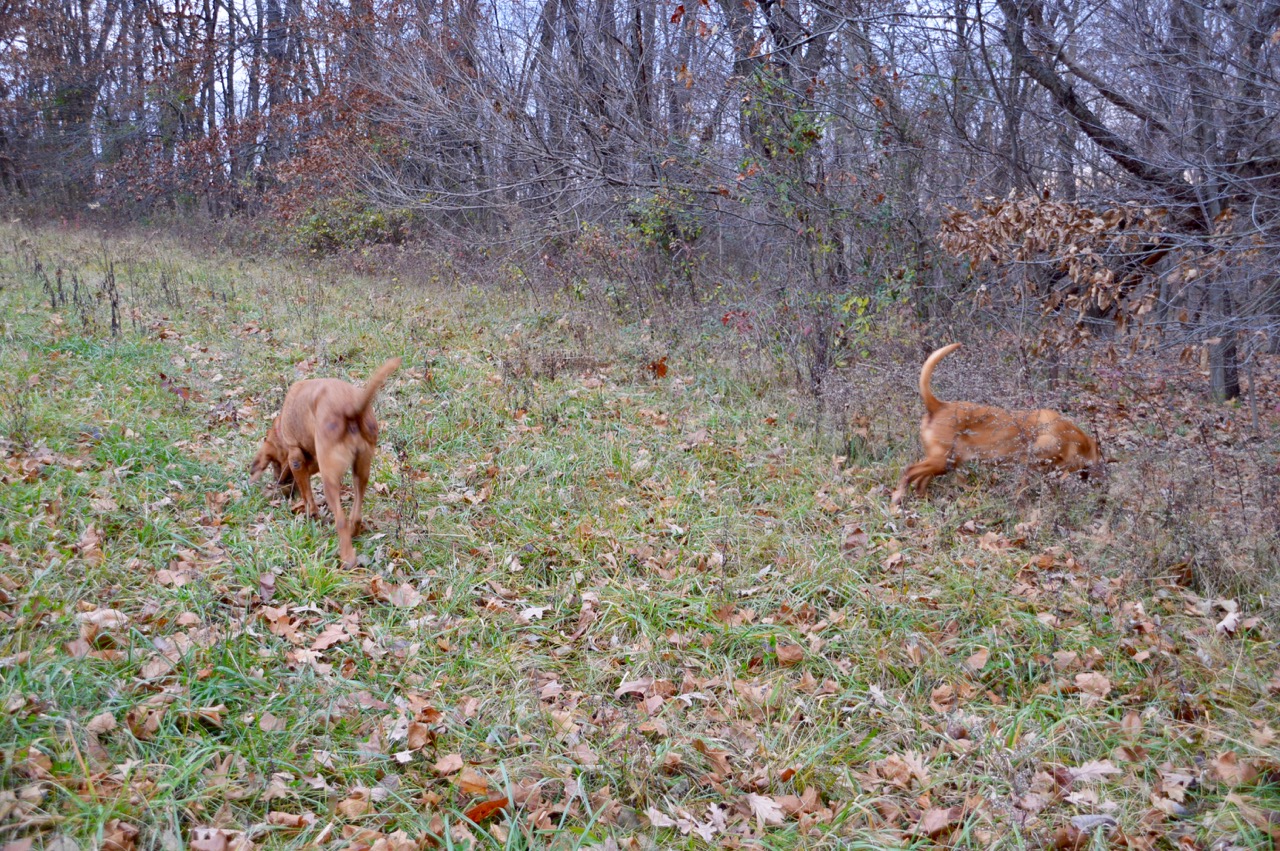 The day started off too strange for all of us, getting up and starting our day in the dark. While I made coffee and did system downloads and app updates during my 'free' data (50Gb/mo) period, the hounds continued to sleep. Sadie was curious only for a few minutes before she turned and went back to bed. I could hear Stella snoring in the next room. Monday's always remind me how much I love retirement.

I'm not sure what is on the agenda for the day, with rain forecasted late this afternoon and early evening. I have plenty of typing to do though. I finally pulled out my handwritten journal from the box in the closet that I want to turn into a electronic document. I kept this journal on my 1976 cross-country bike trip. I thought I had typed a lot yesterday. By the time I quite I was as far as Phoenix Arizona on my trip but it looked like like I had only 1/3 of it finished. 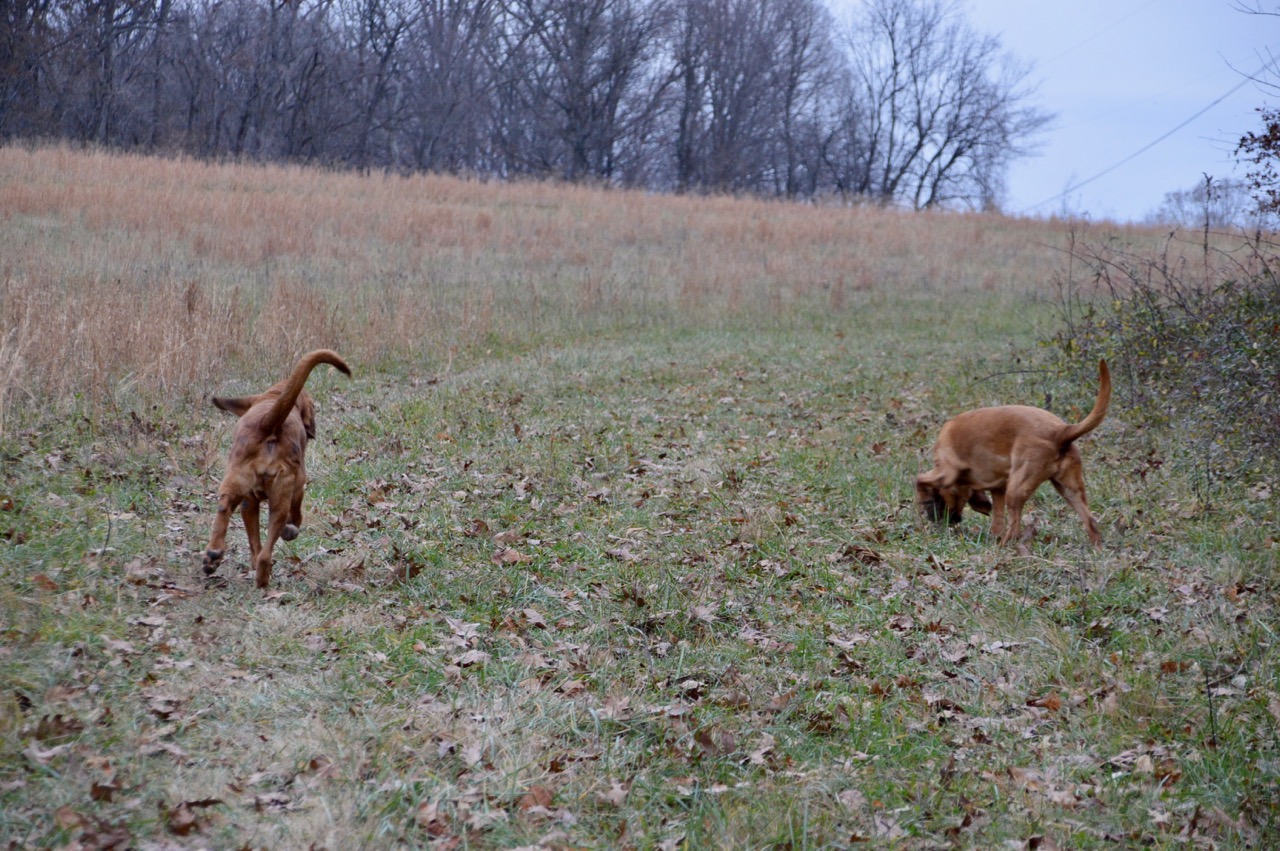 Just in the pages I typed, I found a few things I had forgotten about. I can't say it was written as well as some of my blog posts are but it's interesting enough that I didn't want to stop reading it. After a little research I decided to write the journal in Apple's Pages. That's Word Documents to all of you Microsoft users. I do have some photos that I can scan but at the same time I have some slides from a camera that was taking 8mm film, if that is possible to even remember. I'll talk more about that trip later or may make a separate post about the trip with photos, after I am finished transposing everything. 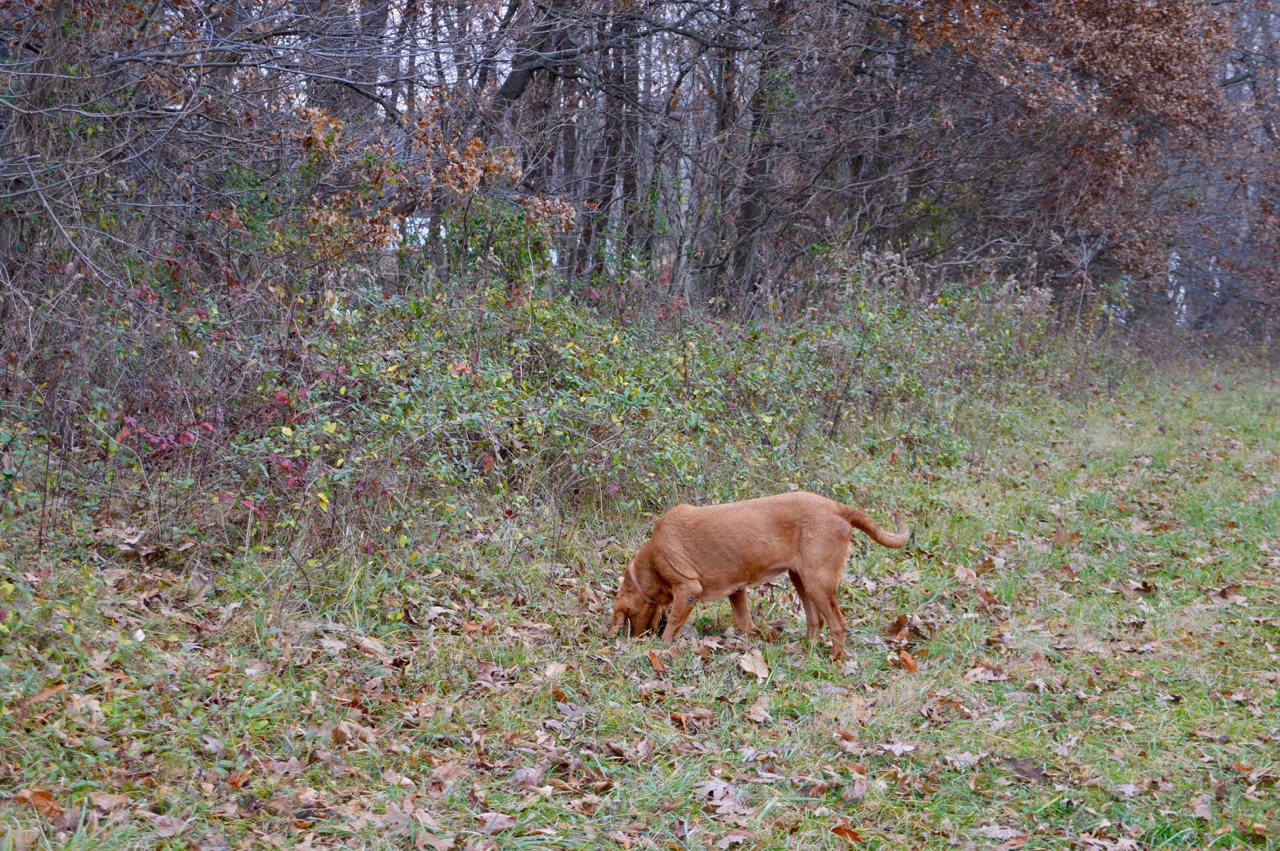 As you can tell by this mornings photos, Stella was urged to follow me and Sadie. That is the normal protocol after she does one of her disappearing acts. She didn't mind too much and would usually start trotting toward Sadie by the time I reached her. 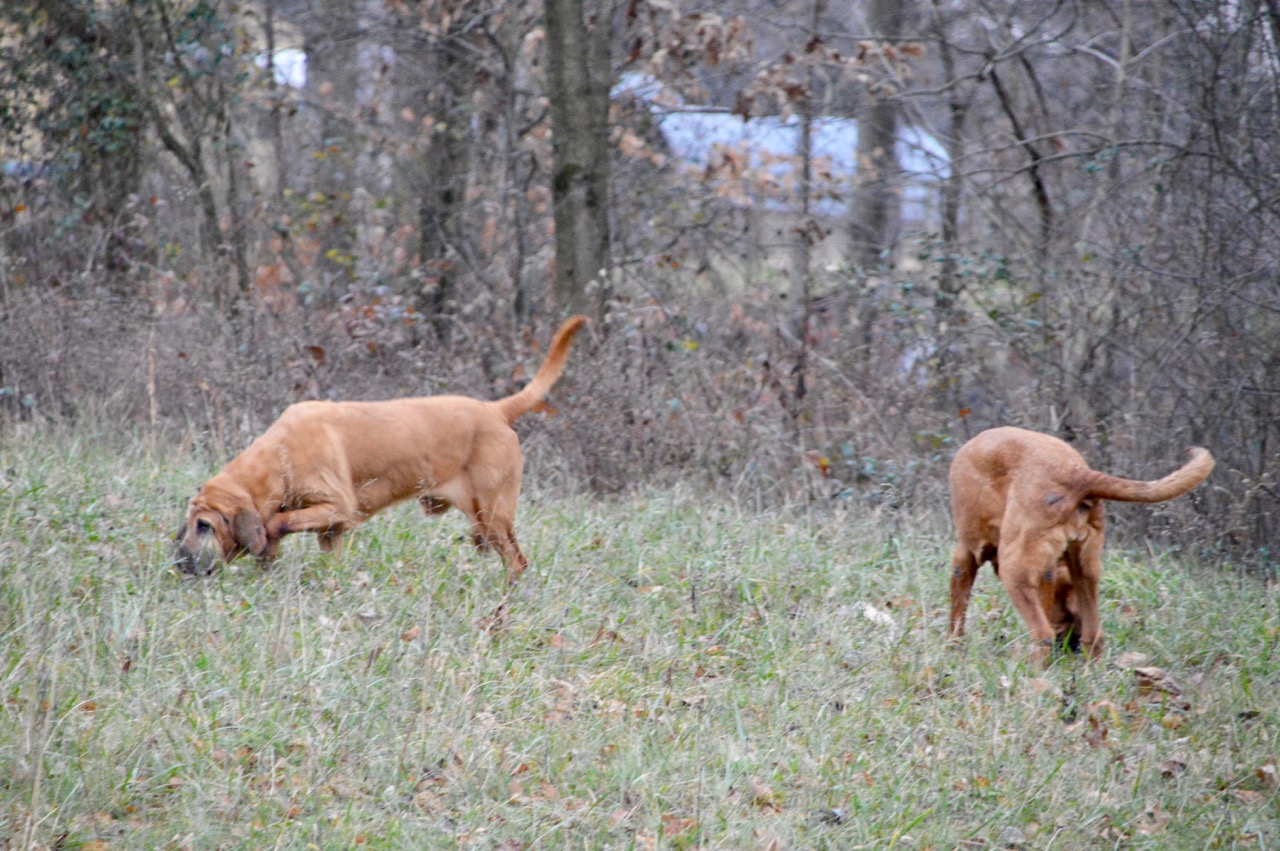 During our afternoon walk yesterday, I heard the loud engines of ATVs. I was able to see them when I glanced into the woods but by the time we reached the first corner of our walk, they were speeding along the path they've made over the past few months at the back of the field. Stella was on the 25' retractable leash, otherwise she would have sprinted after them based on her reactions. Sadie started to chase them but turned around when I yelled her name. 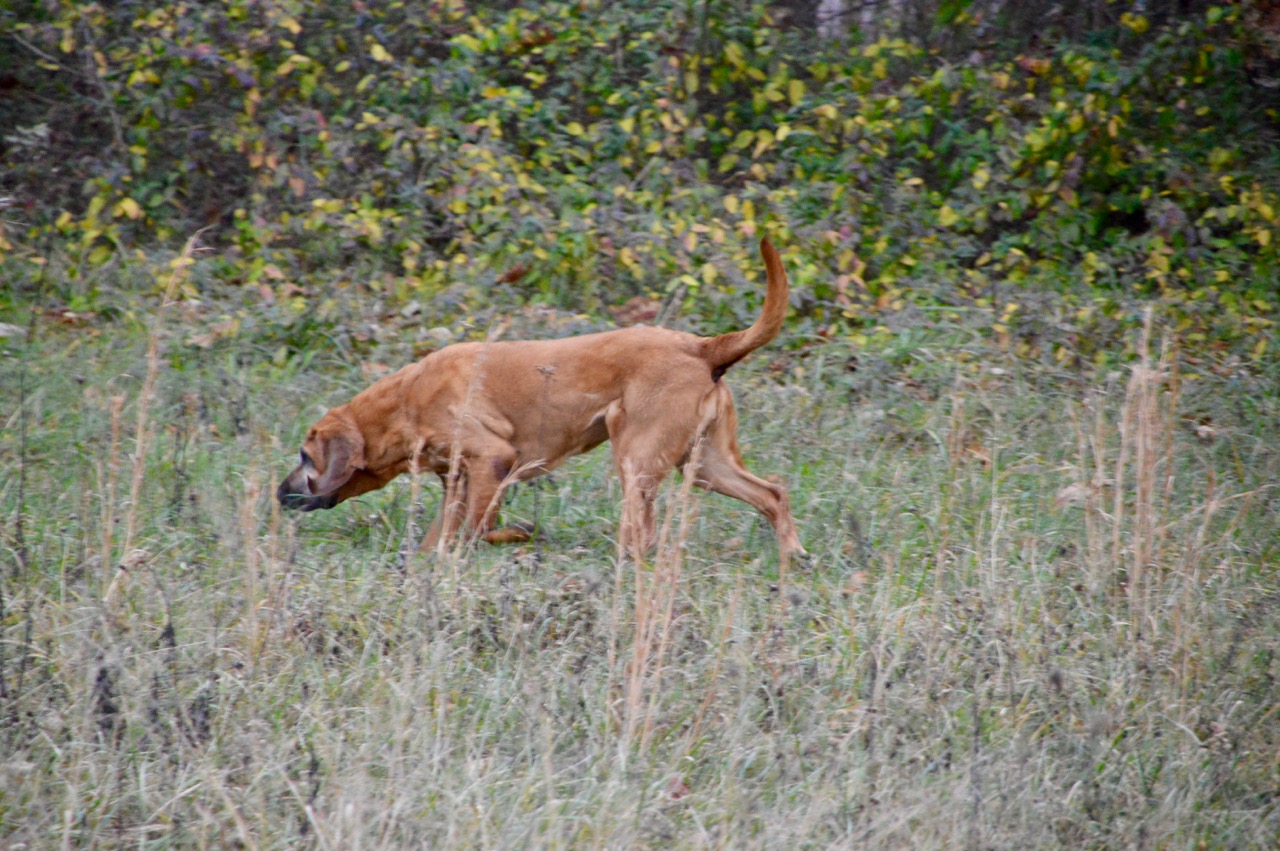 Consequently there were a lot of things both hounds needed to inspect up in the far right corner of the field. That is the entry point for the ATVs going from the field to the deep gully. Why do I have a feeling that next spring/summer will bring more ATV traffic? I also don't think they will bale it anymore based on the farmer's were doing the owner a favor by baling and taking the hay ... based on what their son told me.

I guess it could be worse. When my neighbor bought the land through an estate sale a few years ago, he mentioned to me he was thinking of plowing it up and planting corn. If that were to have happened I would be long gone by now, I would have sold the house and left. So, I guess I can live with some ATV traffic as long as they stay in the other side of the field. 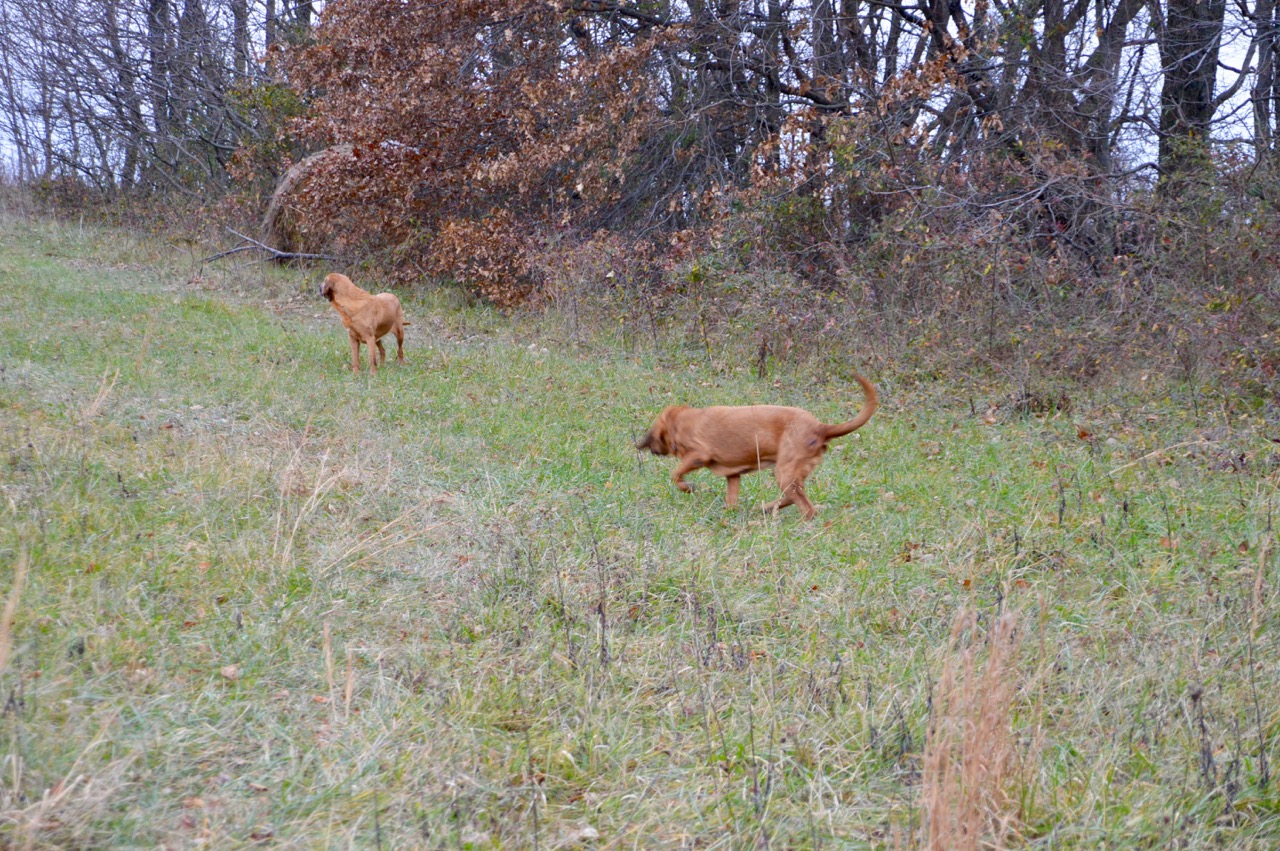 I had to call both Sadie and Stella to stop this morning. They were trotting with their heads down and heading right below the high power tower, leading them to the woods to the north. It was the fresh new ATV tracks that were getting them motivated. Luckily both of them stopped and waited for me to catch up with them, when I called their names. 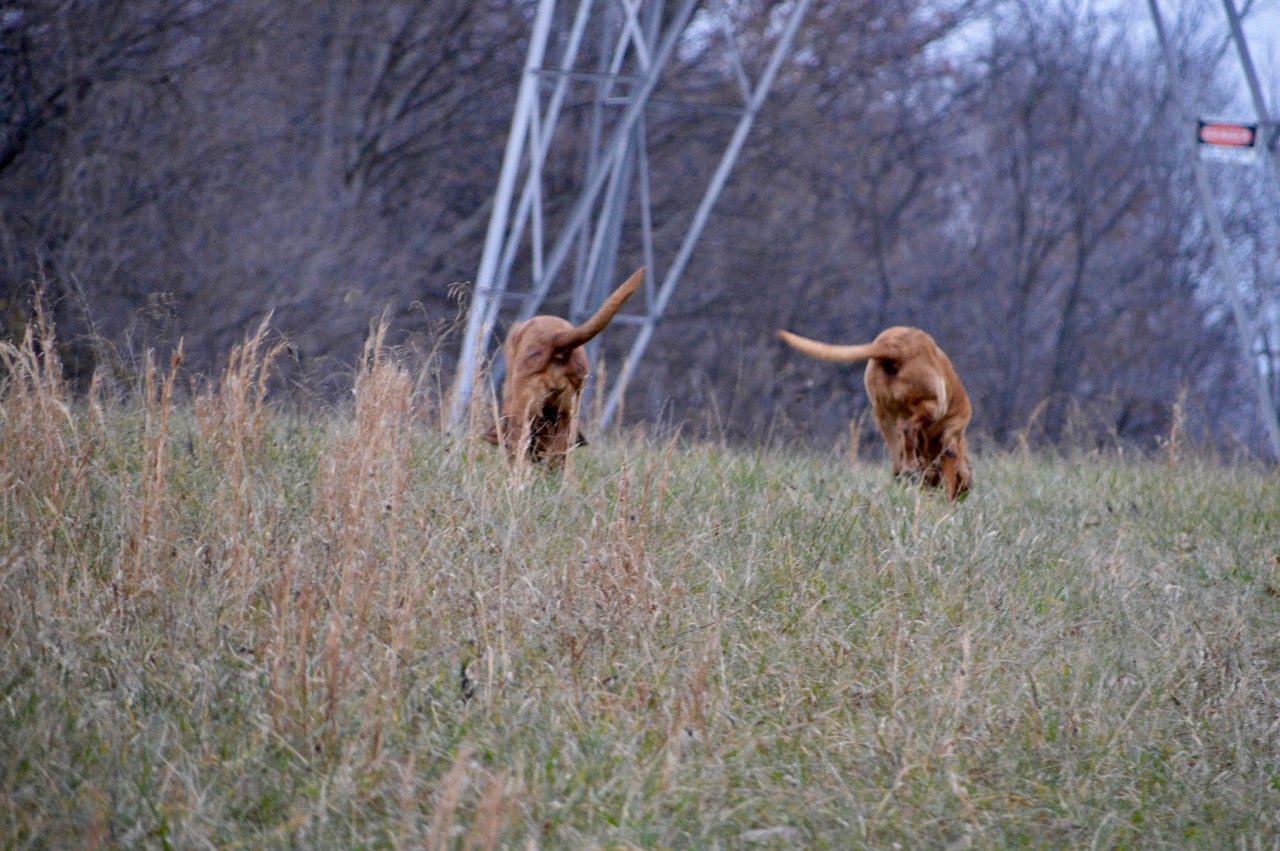 I'll not say at what time I decided to get out of bed, but I will say there is no doubt that a siesta will take place later this afternoon. I received my first of two refund payments on Saturday for the Z4 parts/hardware I returned last week. I wonder how they liked the itemized spreadsheet I sent with box full of parts/hardware?  LOL 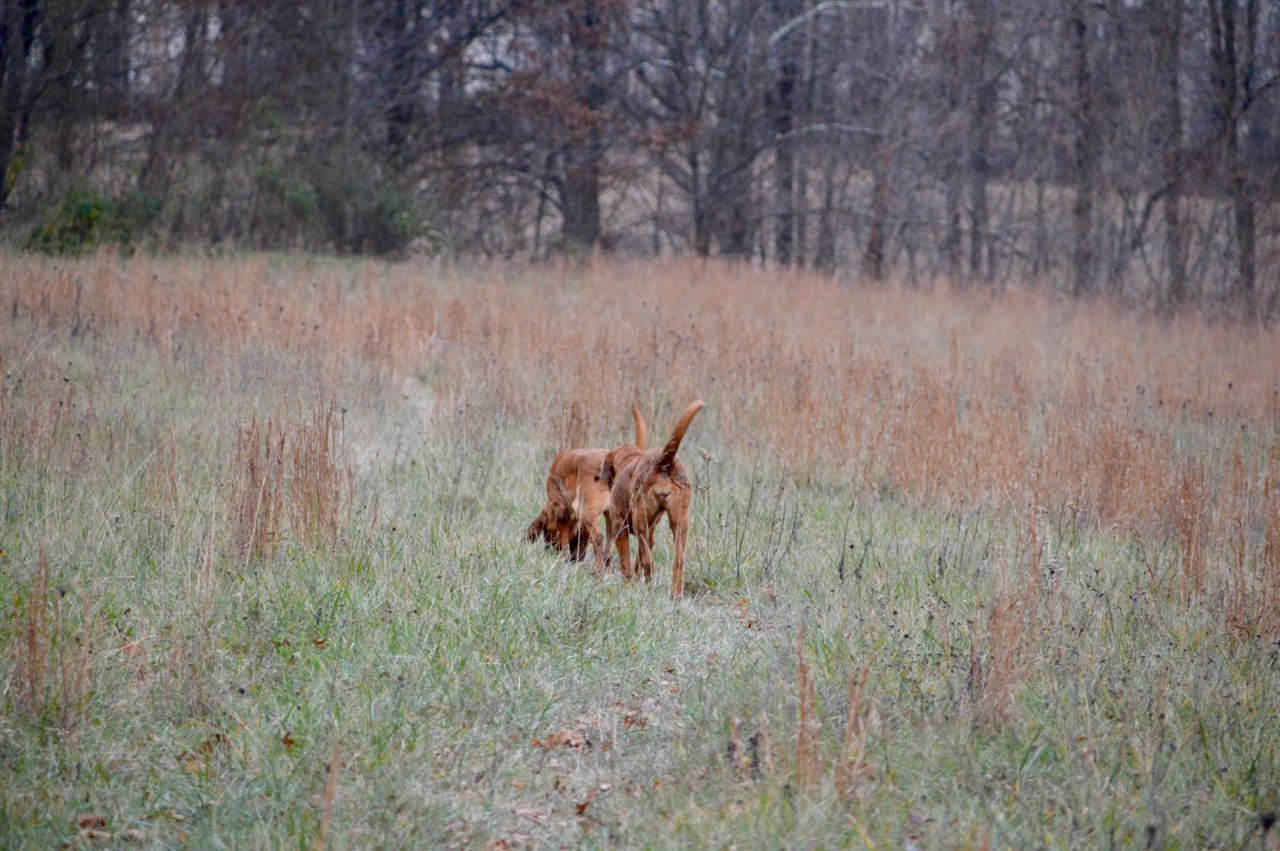 The hounds were pretty laid back the closer we got to the yard this morning. Within minutes after walking inside they both had joined Heidi in a morning nap. Stella sleeps as close to my desk chair as possible. Heidi is still on her sleeping bag and Sadie moves the large chair/ottoman in the living room. They will usually stay that way until they decide to tell me to feed them lunch. 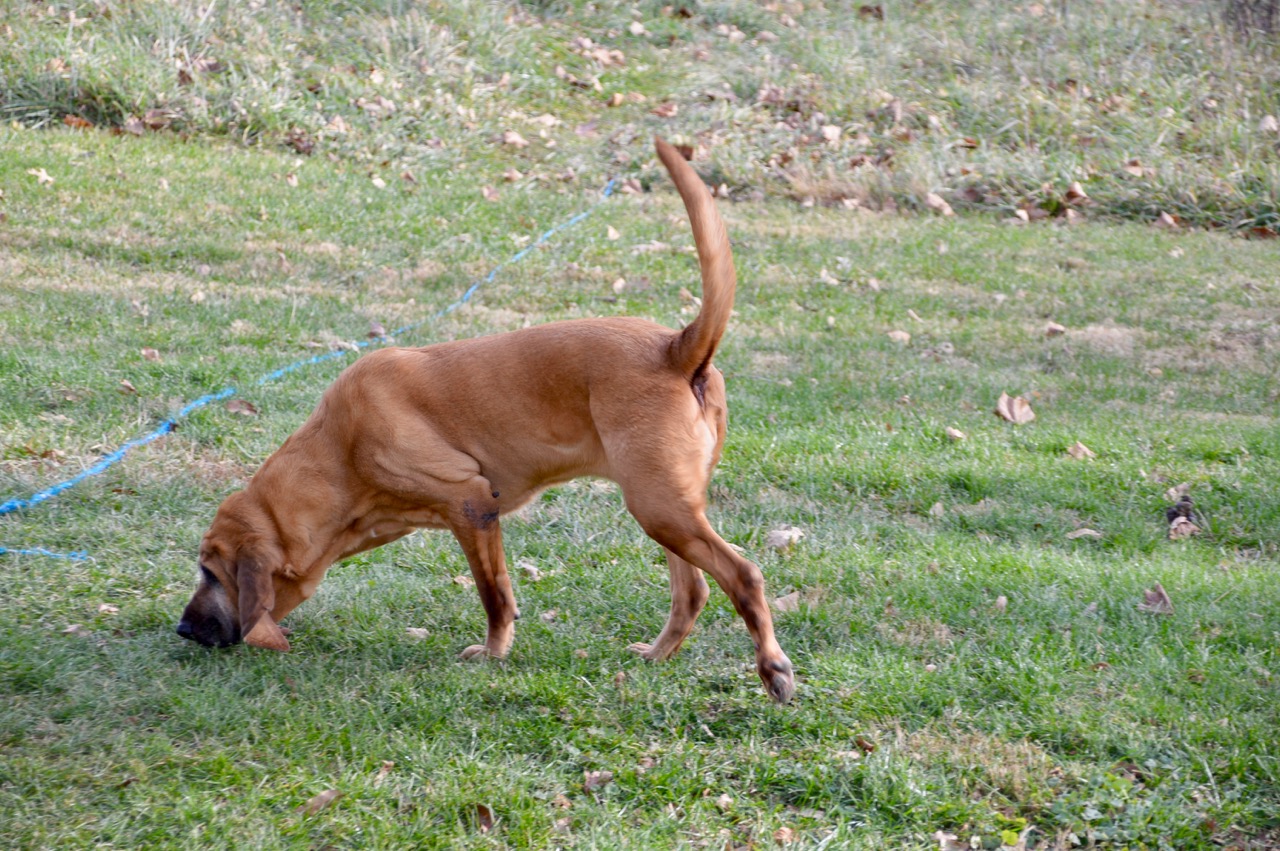 It wasn't long before I had Sadie standing in the doorway giving me her stare and Stella at my elbow, nudging it with her nose. That's when I knew it must be time for lunch. The normal routine is with Heidi not moving a muscle off the couch until she hears Stella howling to be fed, then she will chime in with basset hound barking. After that, there is no way I can not feed them their lunch.

I couldn't believe it could be that late already.

I had been typing from my journal since we came back from the walk. I had lost myself reading it while I typed. Before they came to get me to feed them, I had ridden from Phoenix Arizona and was now riding up the coast highway just north of Santa Barbara. 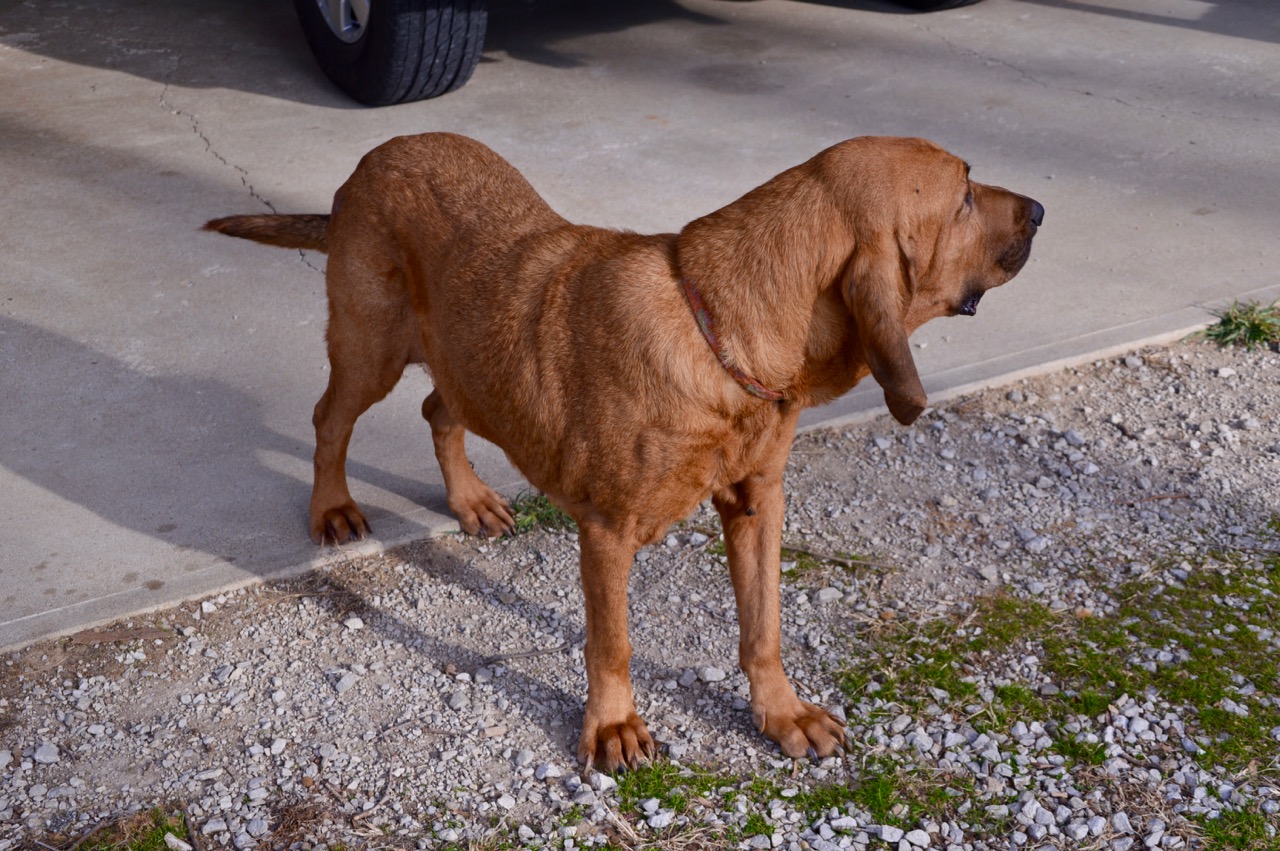 Stella wasn't sure if it was a good time for a walk or not. She rarely, if ever goes on the 2nd walk of the day within minutes of finishing her meal. It's one of the ways to prevent bloat. I've never had a bloodhound bloat before and I no longer follow Bloodhound groups, so I don't know how common it is anymore but I'm taking no chances. 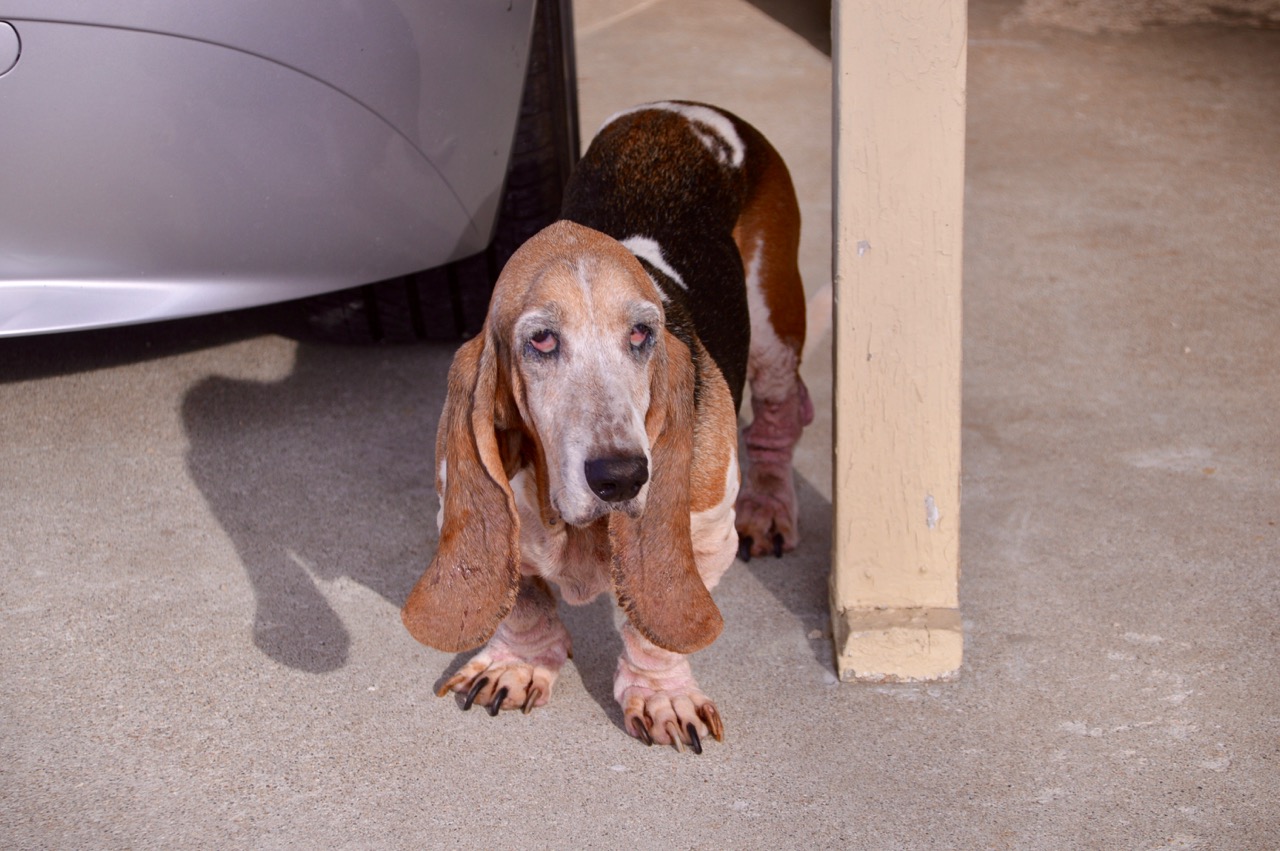 Heidi came outside long enough to sniff the air and feel that the temps moving across her nose was not warm enough to spend any more time it would taken than to use the bathroom. She was sprinting for the couch by the time Sadie, Stella and I were at the door. 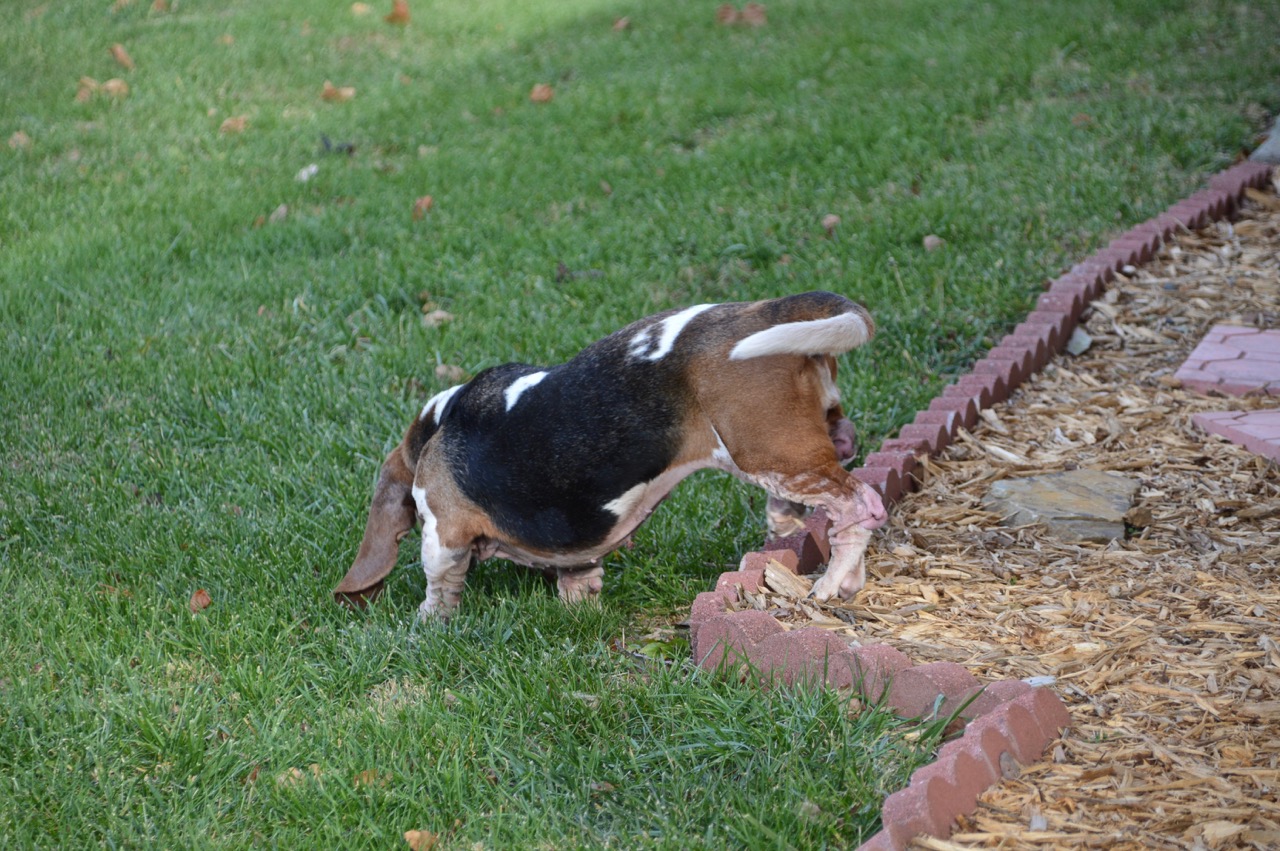 Hard to believe that yard is that green for the 4th day of December. 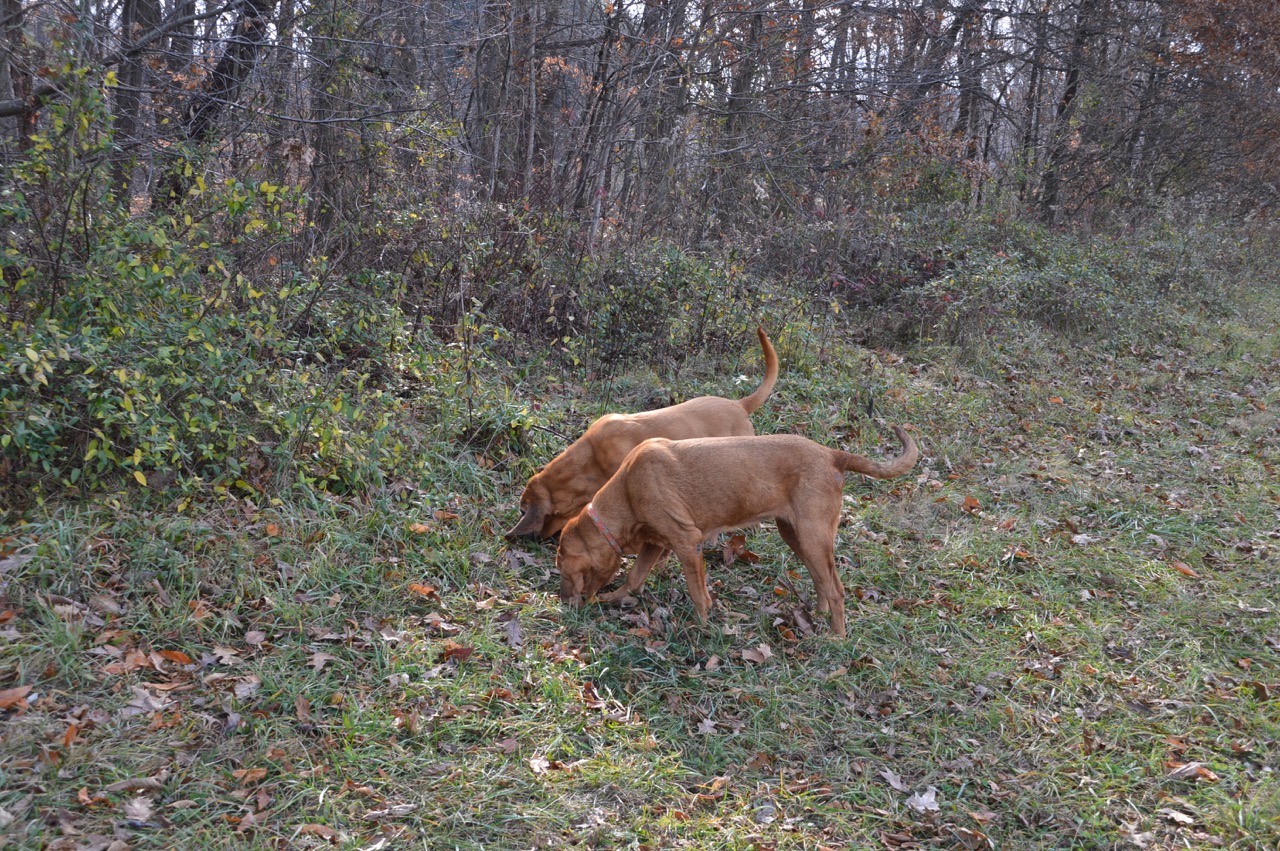 After the mandatory wait period for them before we started our walk, both of them took off running toward the edge of the field. I didn't hear any ATVs and shouldn't have since the kids are in school today. I saw no deer on the horizon but the wind from the south had picked up and it's possible that had something to do with them taking off. 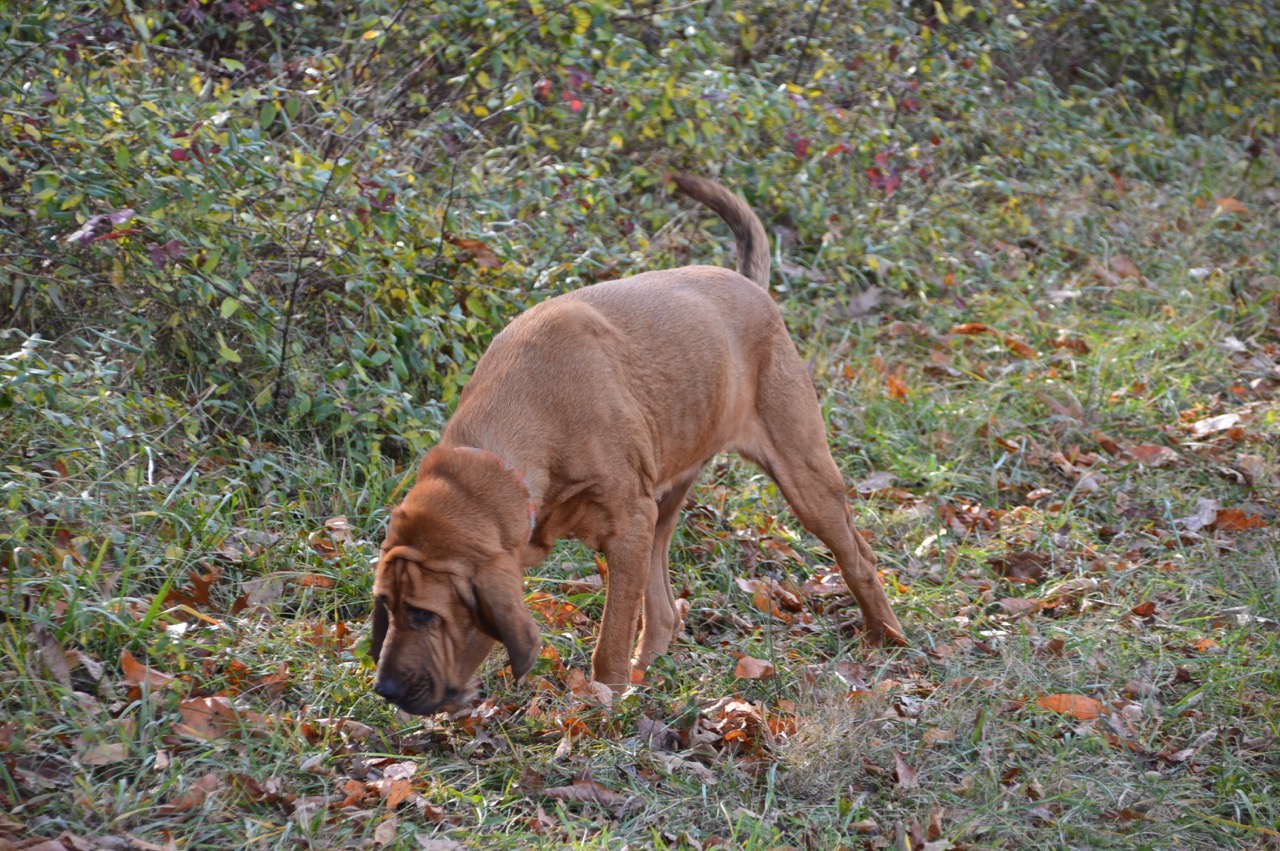 (Yes, I know I changed in the middle of the post and started typing content that goes with the photos UNDER them instead of BEFORE them.)

I normally have Stella on the leash for the afternoon walk but I didn't have enough photos after our walk this morning so the camera took the leash's place. That did not mean I was going to let her hang back and give her a chance to wander off again. It took a lot of "come on" to get her to move but she gradually followed Sadie and I. 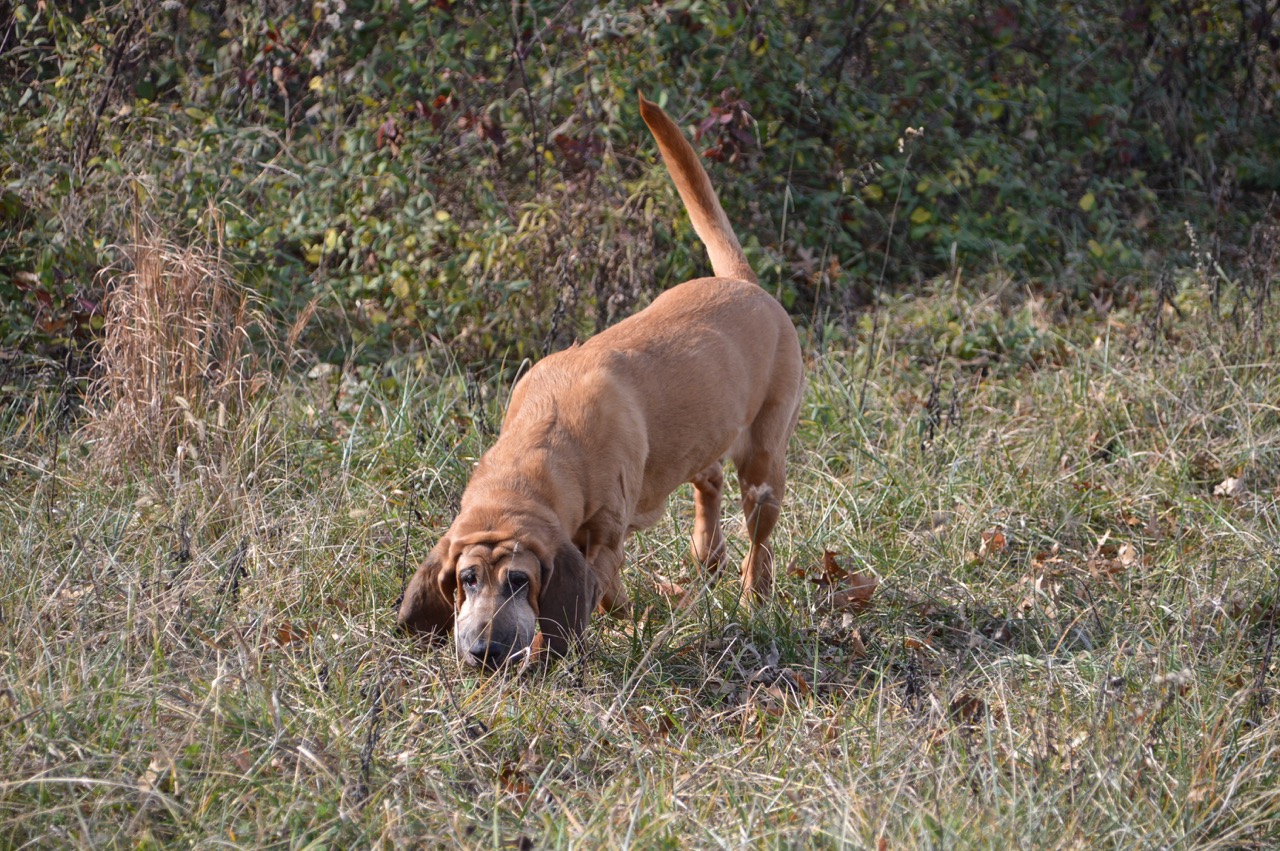 Sadie is just Sadie and when she is outside anywhere it's time to track scent. Here you can barely see her on the full inhale as her jowls have filled with air as she sniffs the ground. 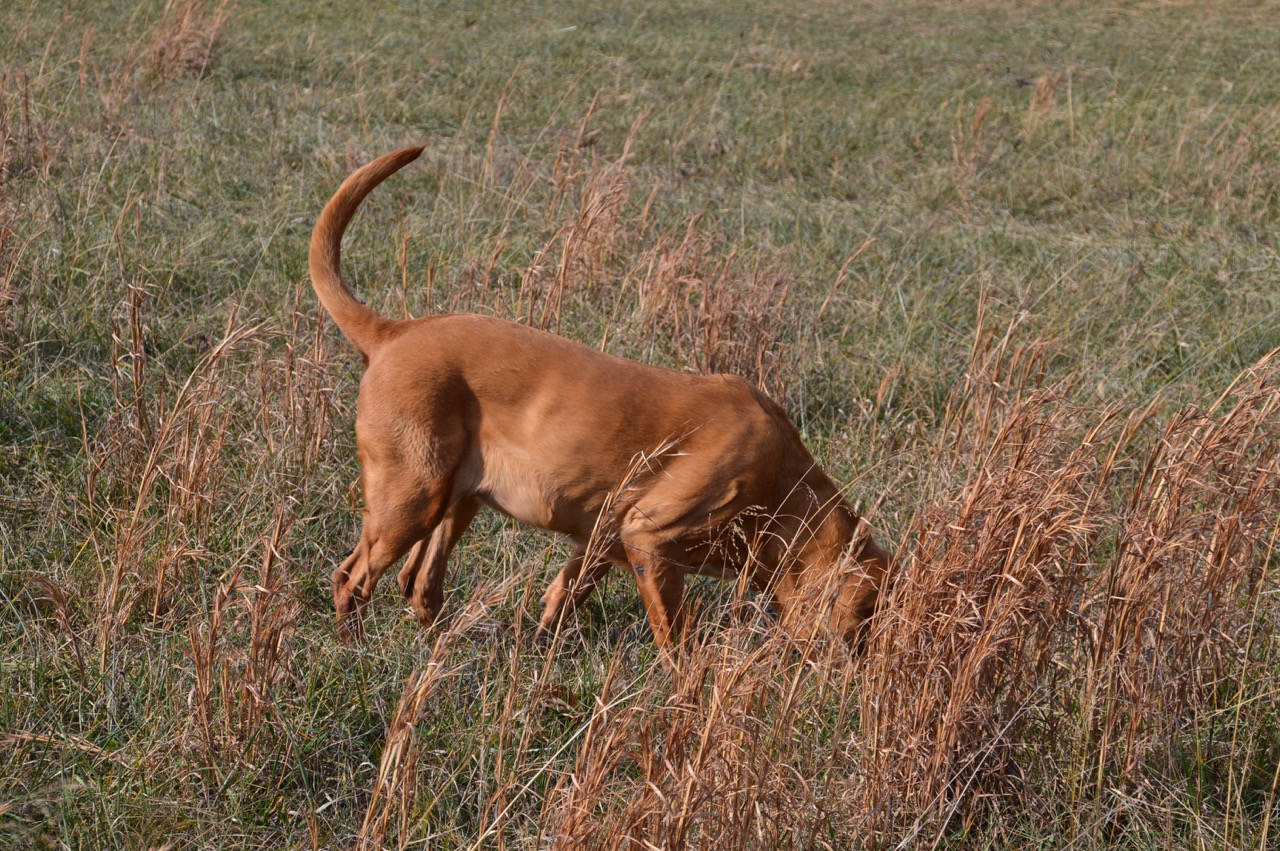 I could see how the rain could blow in later this afternoon based on how strong the winds were from the south. There was a lot of cloud movement that my camera didn't catch but it should be a nice rain later today and then freezing temps in the 30's by Thursday. 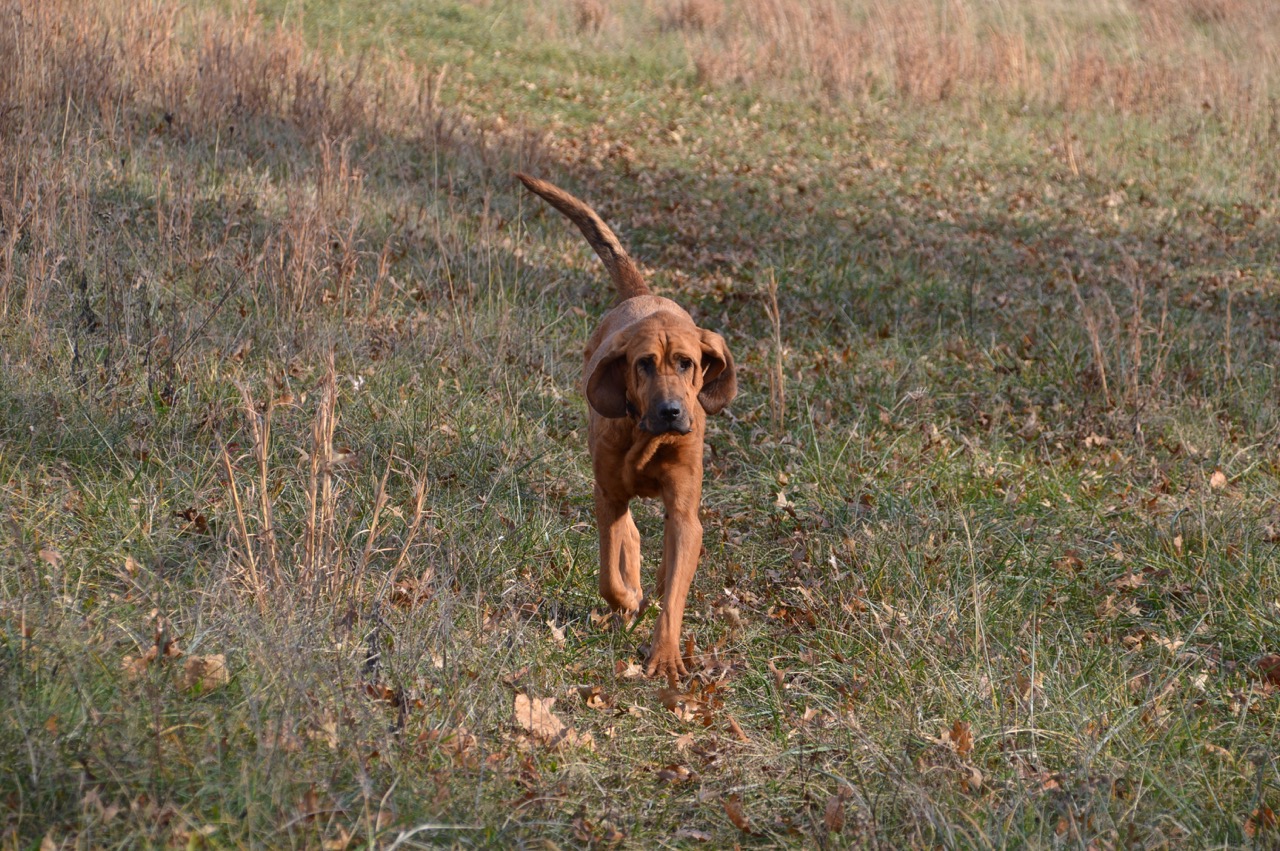 It surprised me to see Stella trotting to catch Sadie and I. She will follow this same path for any walk she does after the morning walk. Again, it took some verbal commands as "come on" to get her back home, probably more of them than I wanted to say. Yes, she always wins and gets her way. 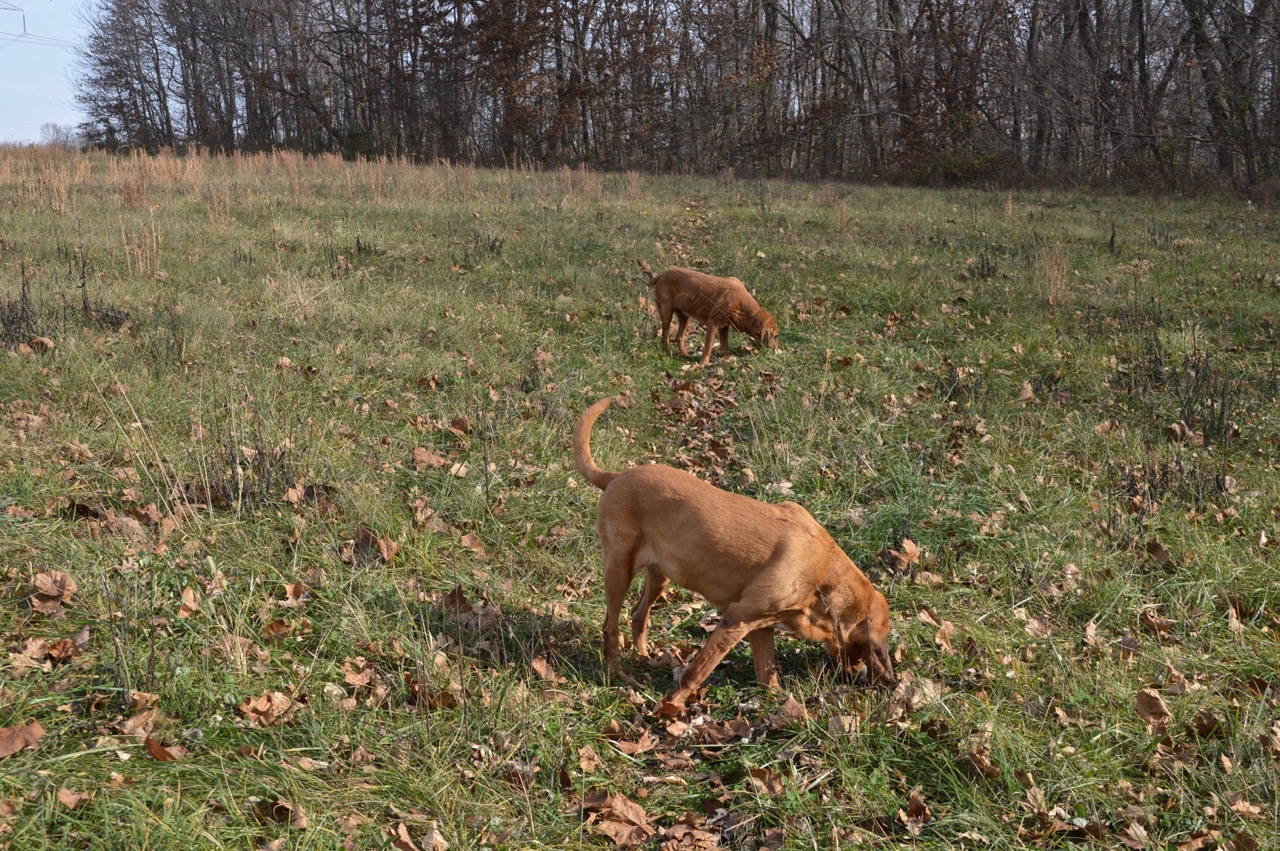 Just because the wind has picked up speed, the temps are a little warmer than this morning and I am already standing at the corner of the house does not mean it's time to finish this 2nd walk of the day. There are scents to check out all the way up to the yard and beyond if I have the time to wait on them. 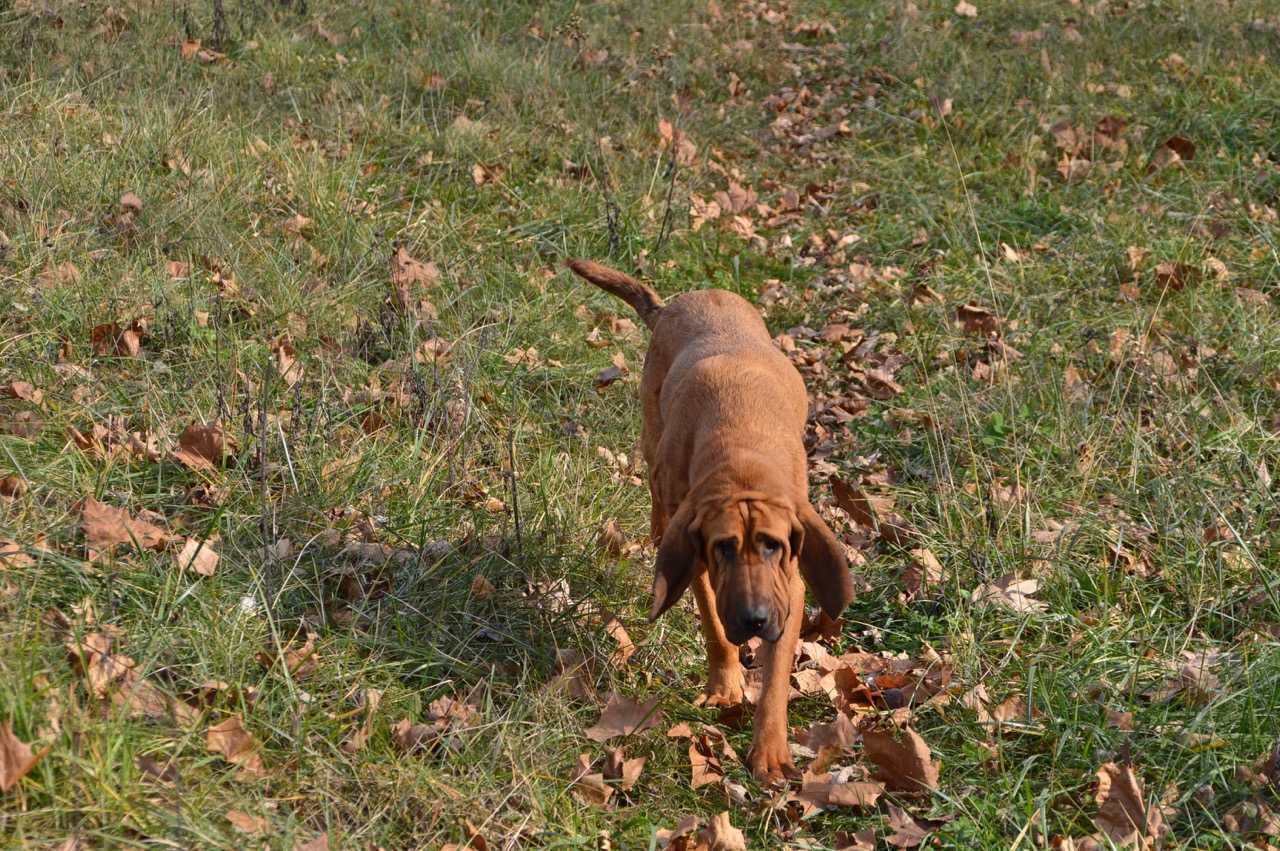 This is the look she has when she is tired and is ready for her afternoon siesta. 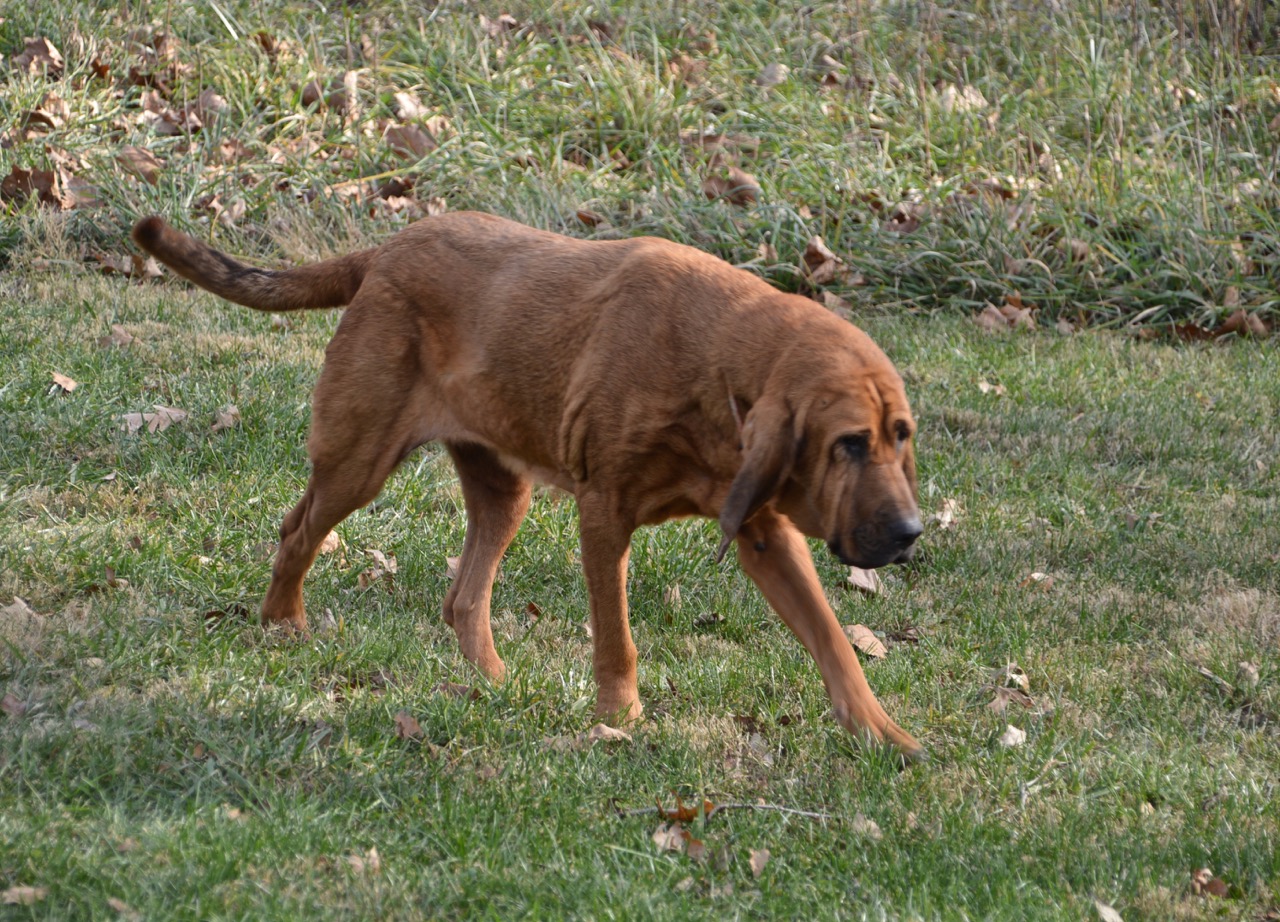 Once she feels that way and decides she wants to sleep, THEN she can't get back into the house fast enough.

I'll go back to typing the journal and forget I'm not back riding my bike up the west coast on Hwy 1 heading toward Seattle. I am still amazed as I type from that journal just how much stuff I forgot about the trip.

I'm sure you know that Christmas is only 3 weeks from today? That is hard to believe, just how fast time is flying right now.

Another sunny day in 'the tropics' of Southern Indiana.
at December 04, 2017