The Hounds Check Out The Snow 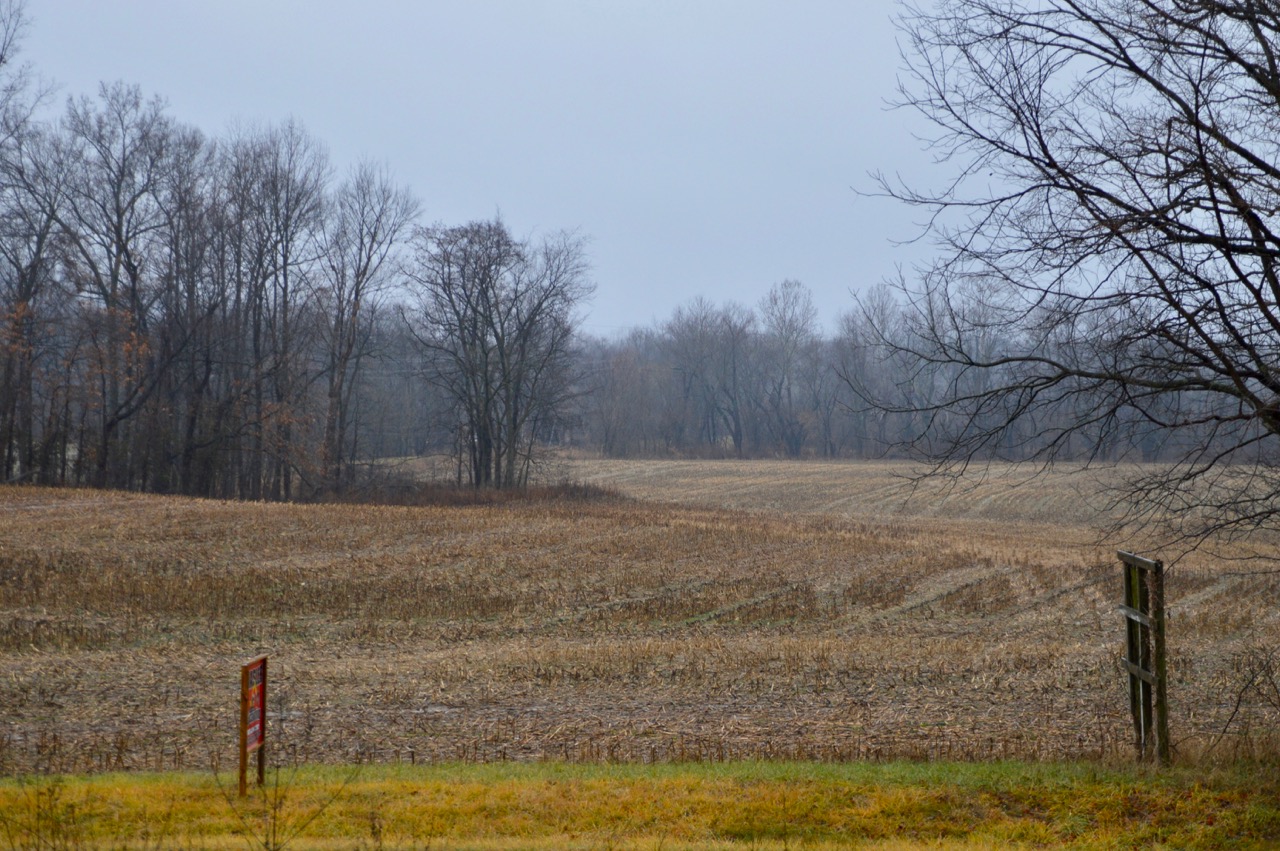 For once the weatherman was right last night. It rained a lot over night and by the time we hit the field for the first walk of the day, water was coming up the sides of my hiking boots with each step, plus it was freezing cold. Snow showers were suppose to start about the time we went outside. 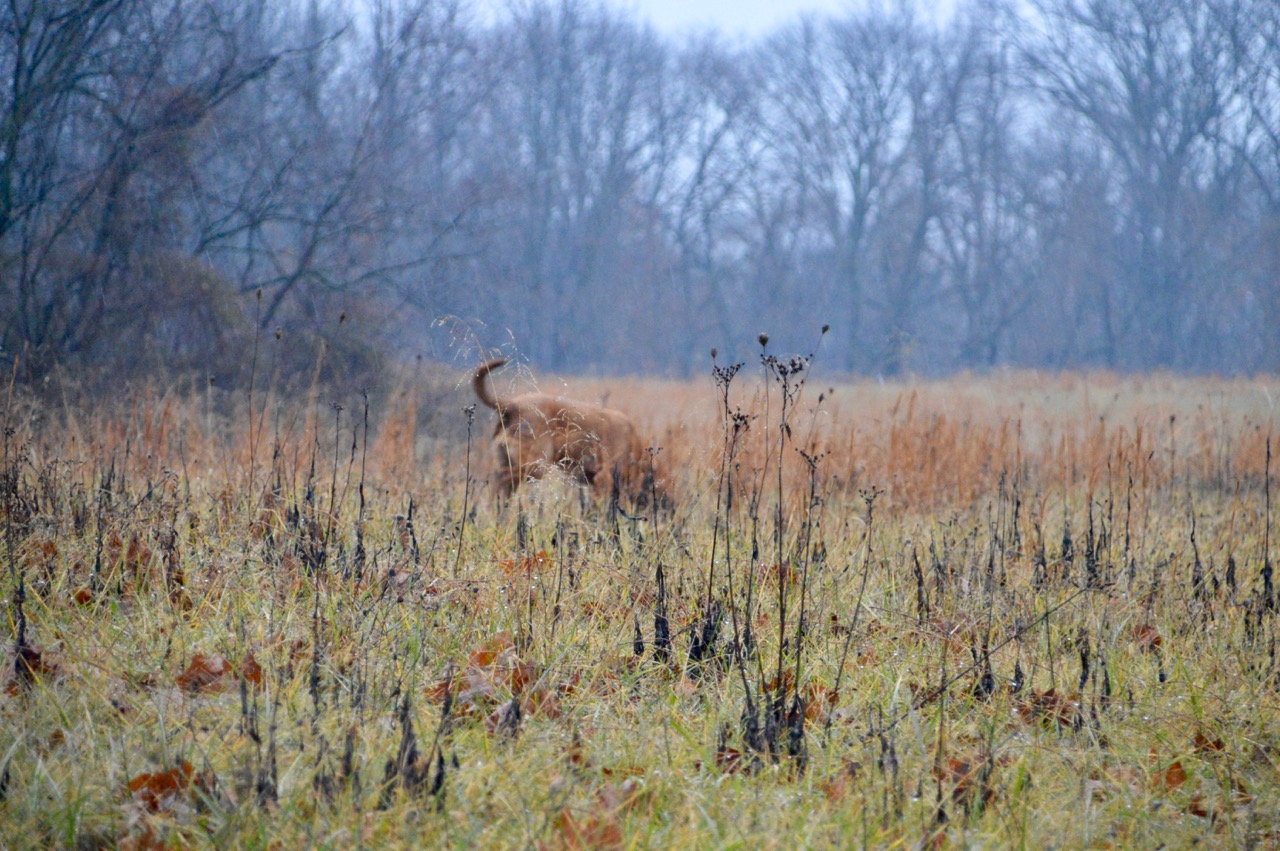 While the hounds split up and went different directions I was hearing water going down the gutter downspout but saw no rain of any kind on my sleeve. Some of the path I take had standing water but Sadie had to get her walk in. 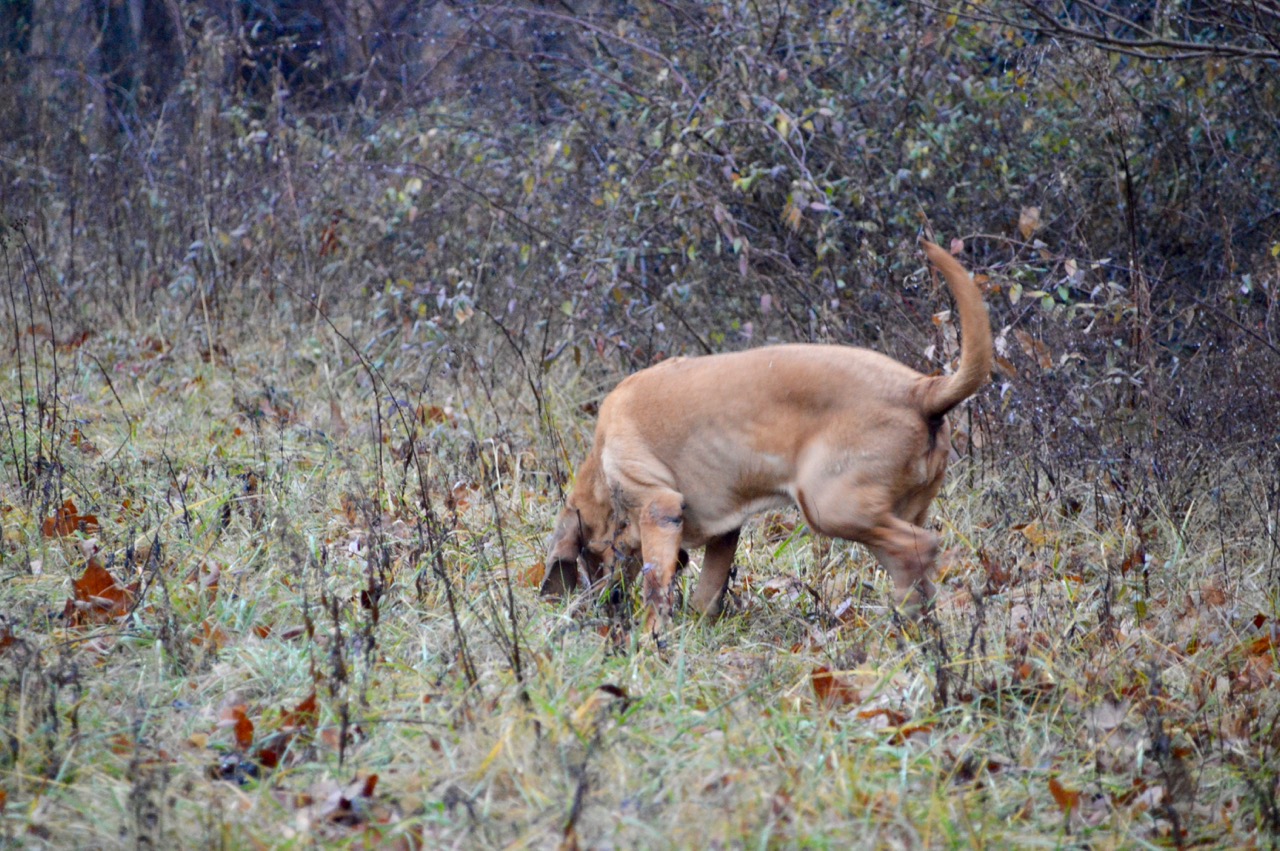 It was borderline freezing with a windchill in the 20's. I was now seeing small balls of snow hit my parka sleeve but couldn't hear it. Sadie marched through the high grass with water trails behind each of her paws ... this was going to be very wet walk. 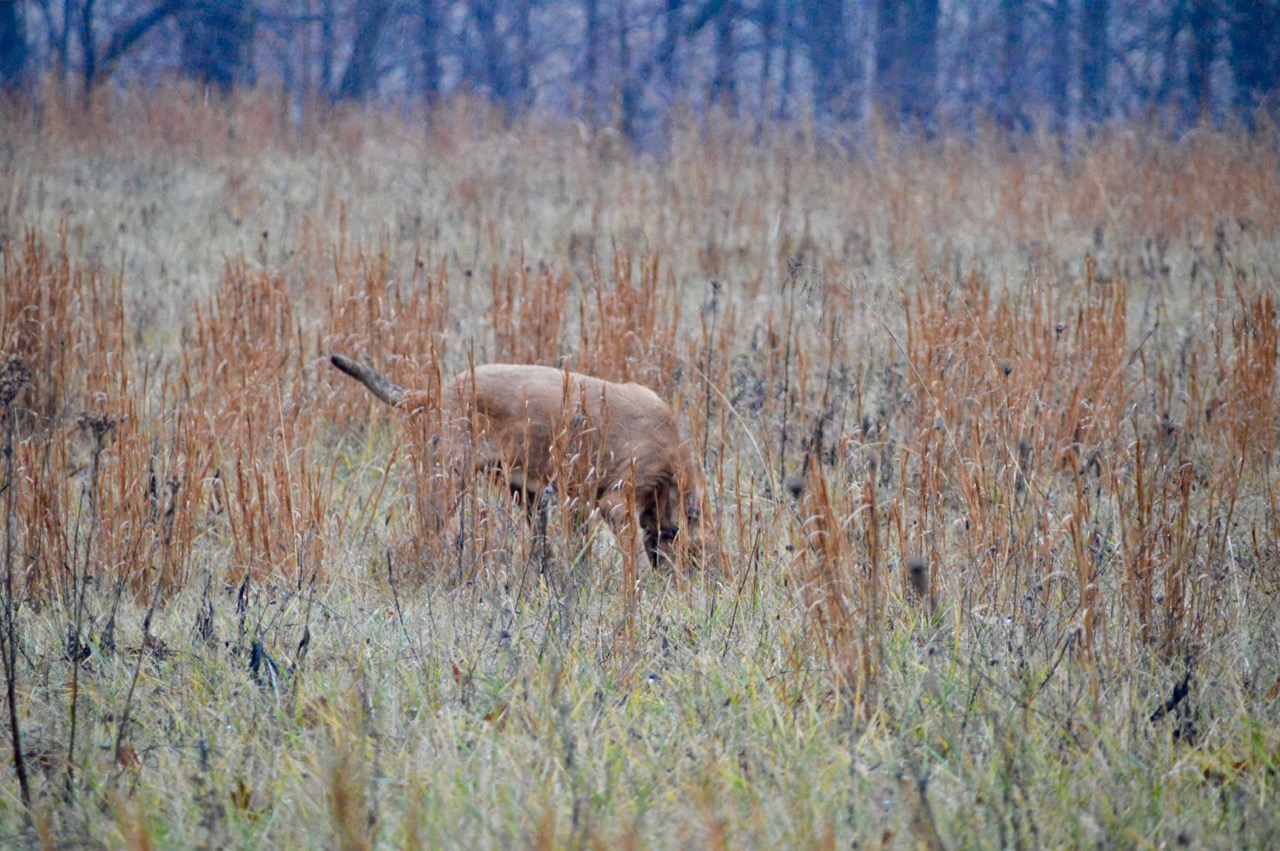 I left Stella where she wanted to be. That was not far from the house, out in the middle of the field between my house and the neighbors. Sadie had ran and disappeared around the first turn and I could hear a snow/rain mixture hitting the shoulders of my parka. Too late to turn around and if nothing else, I had to go get Sadie. 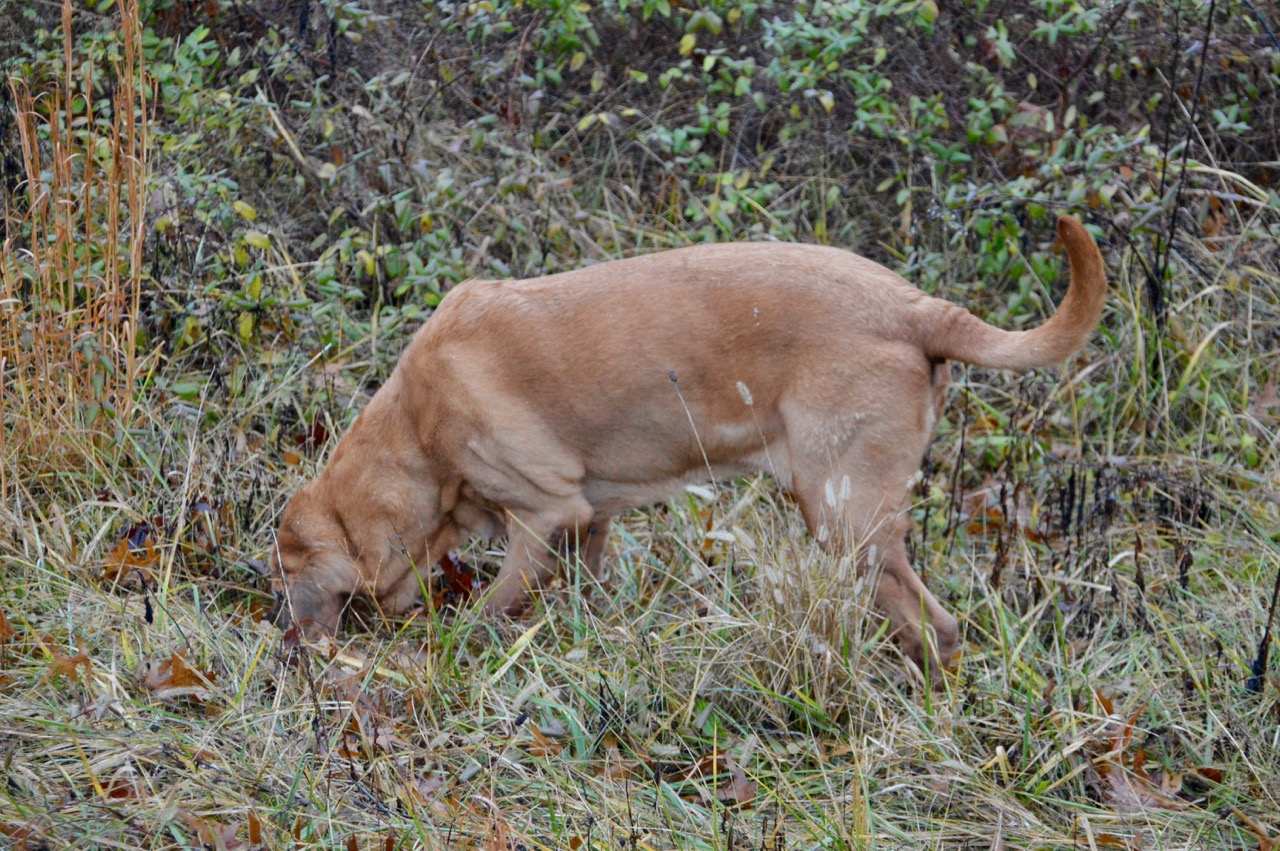 By the time I caught up with her she was almost to the far right corner of the field. I had dressed for freezing temps but my face was telling me just how cold it really was. The sleet was starting to come down a little harder. 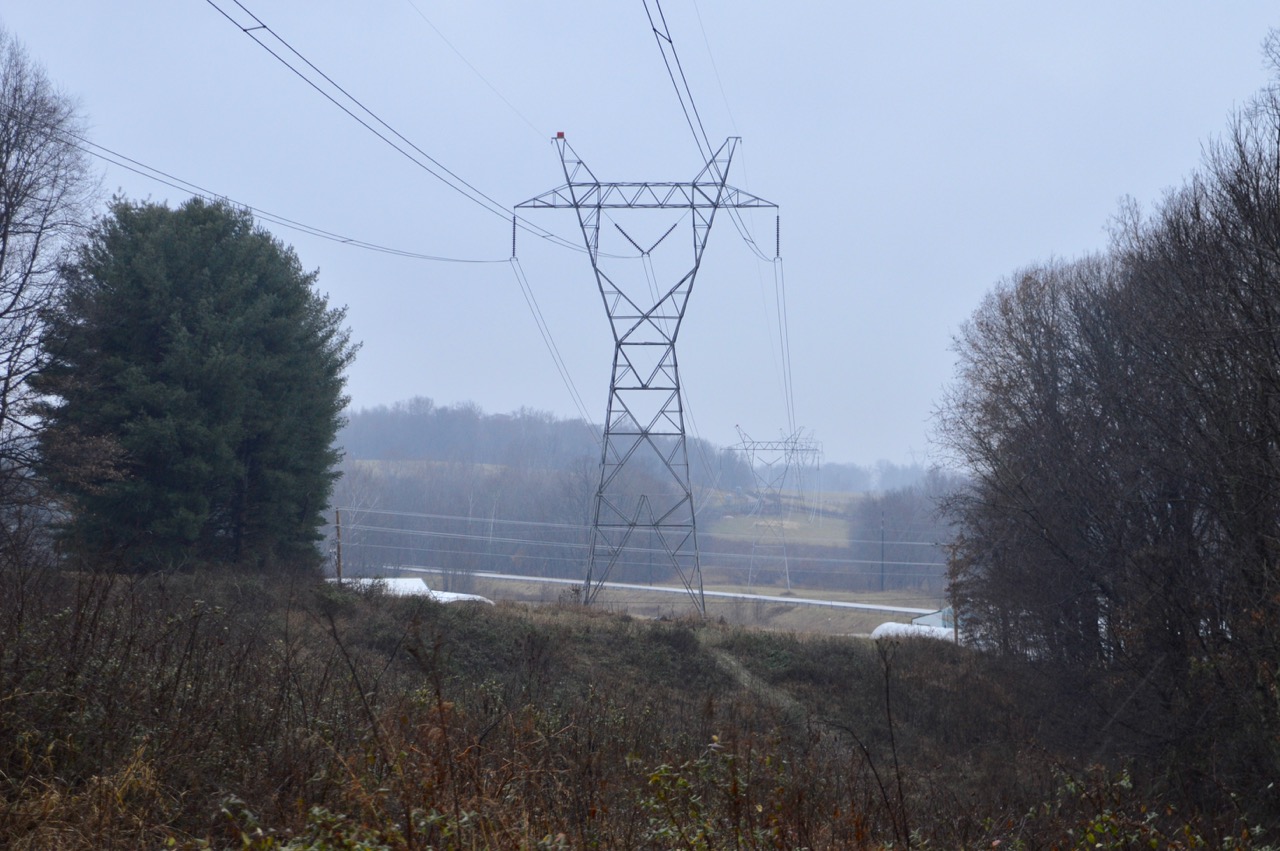 It was darker than this photo shows but you can tell it's a dreary day but maybe not how cold it is. 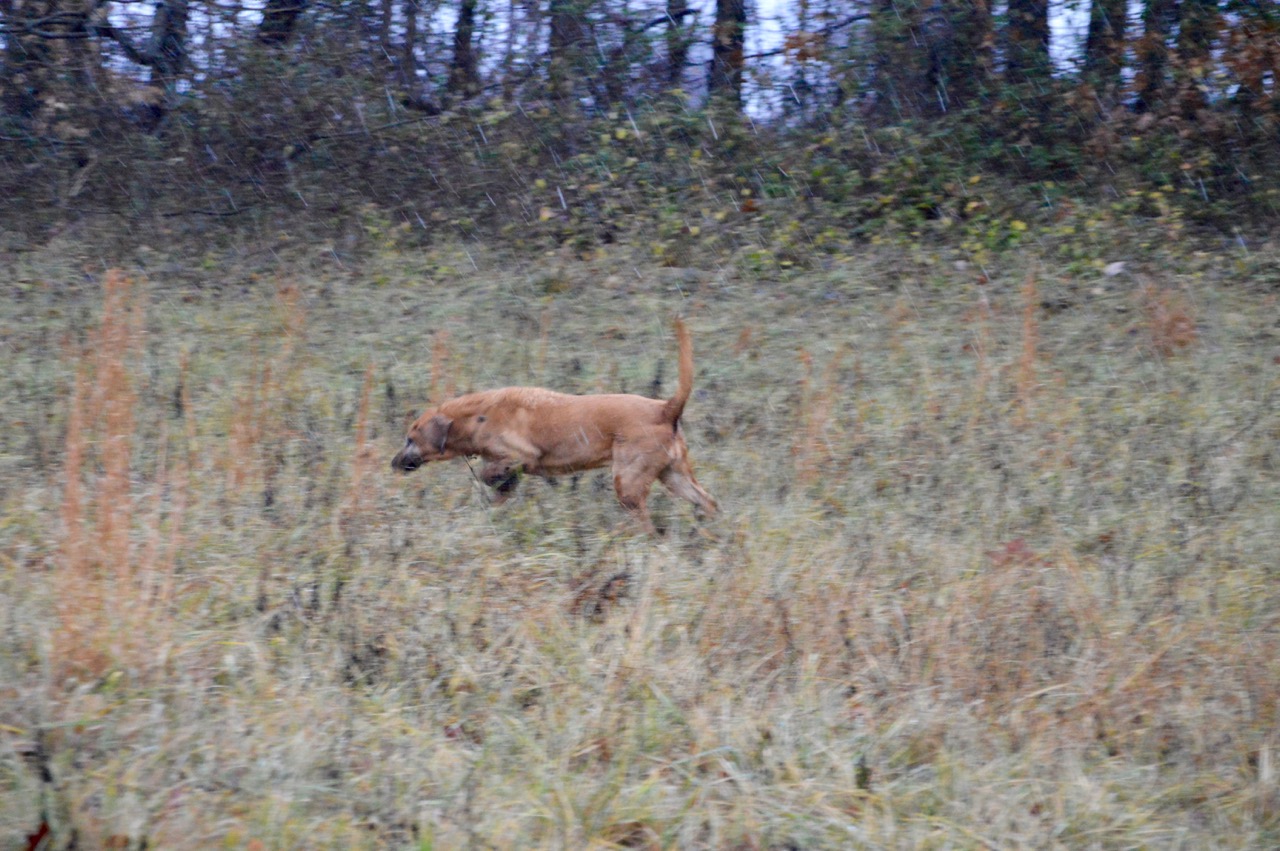 That did not matter to Sadie ... she had a lot of ground to cover yet as I kept telling her we had to go home. 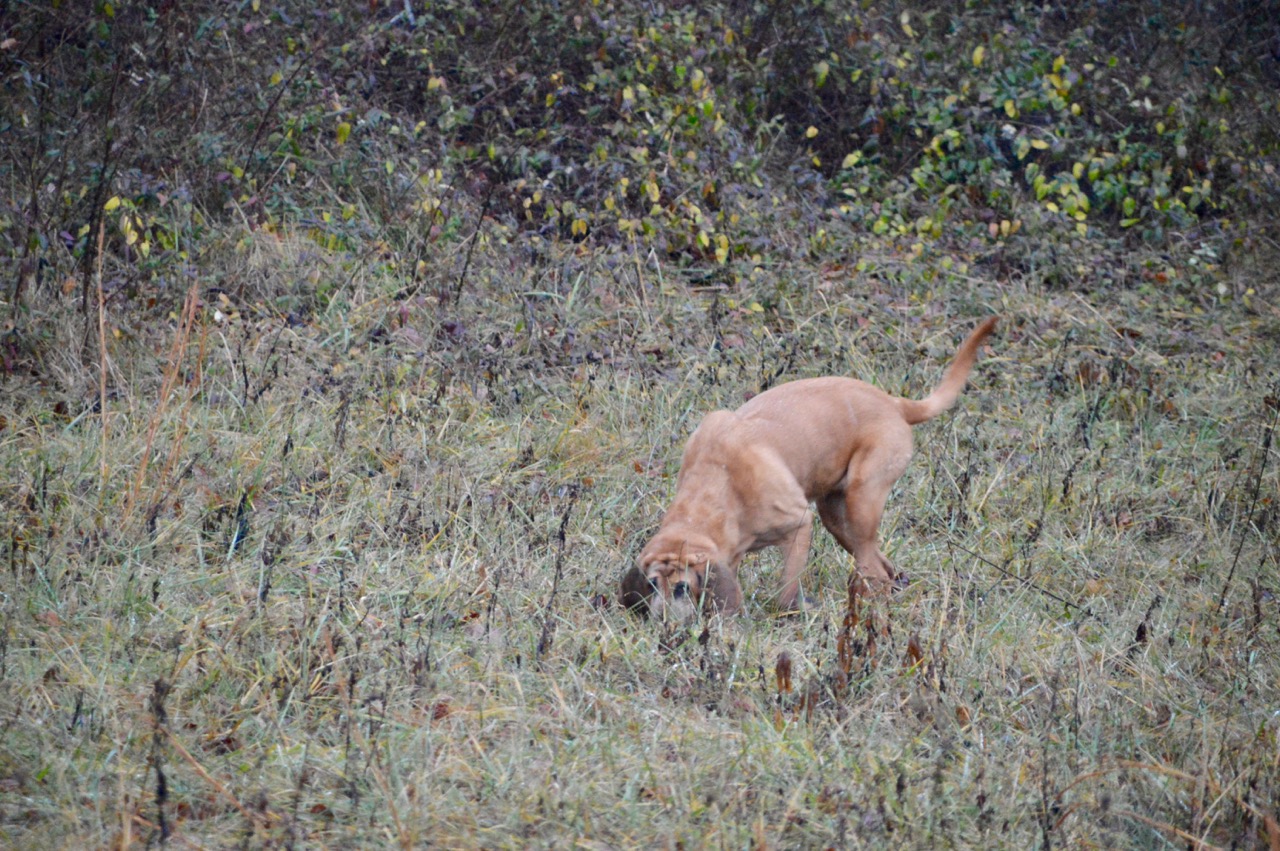 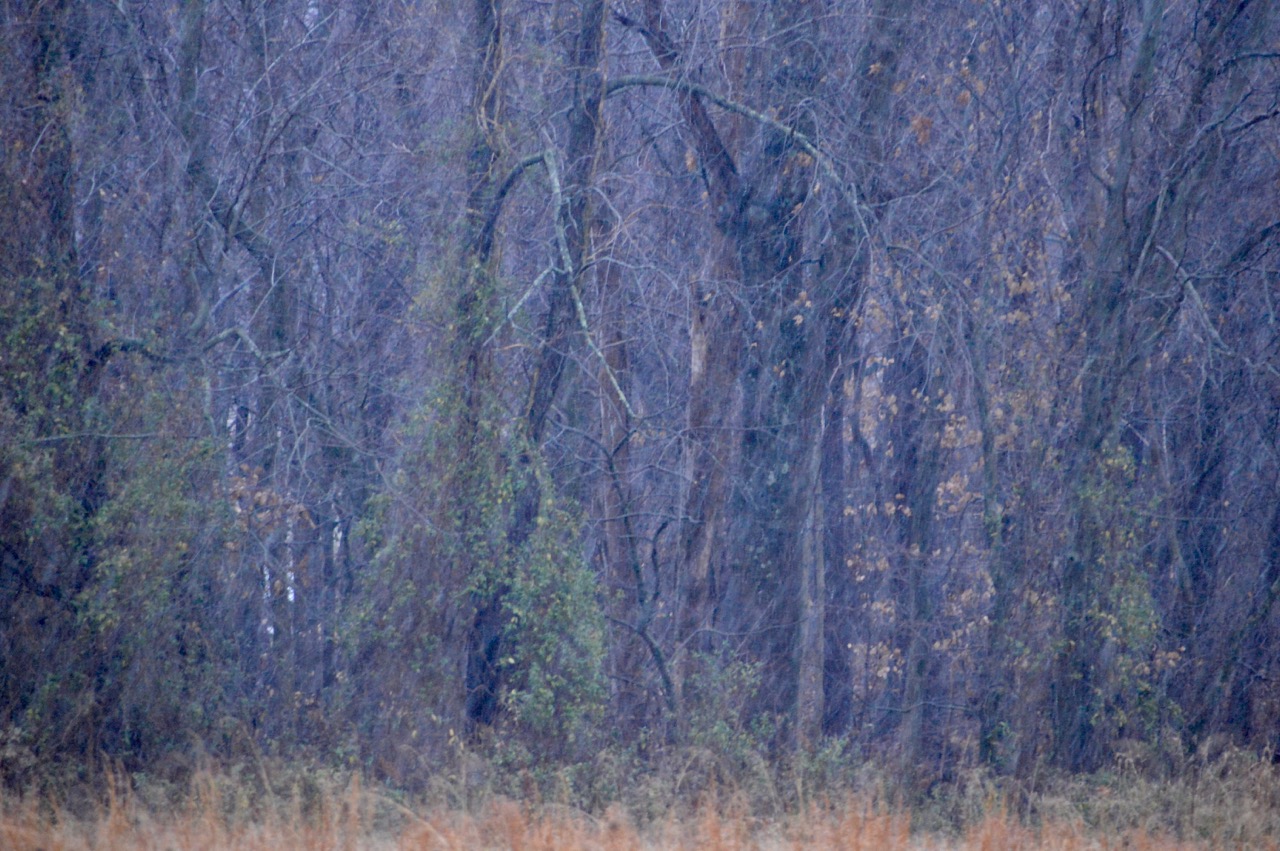 You can barely see the sleet coming down with against the background of the trees.  As it hit me in my face I increased my walking pace with Sadie trotting right beside me. Stella was no where in view from what I could see. 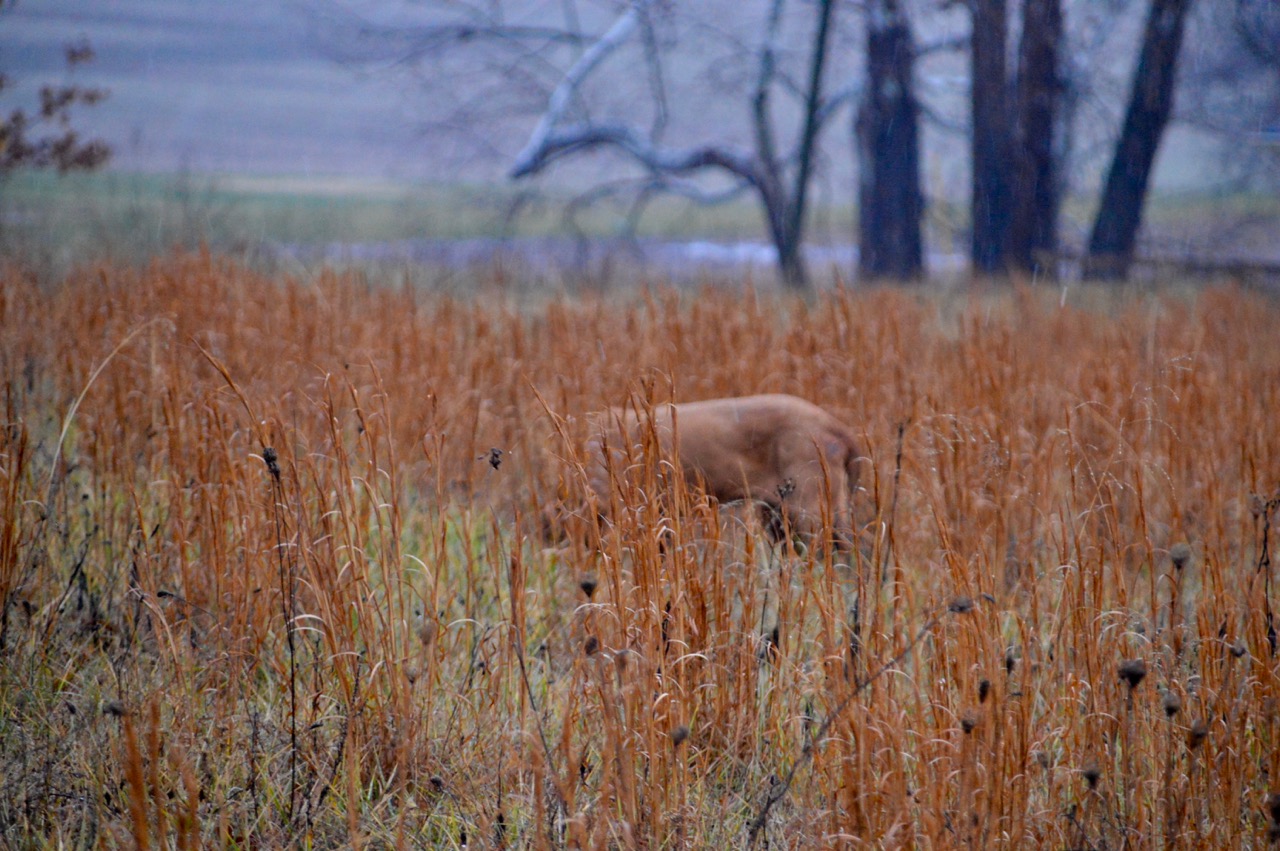 About the same time Sadie and I caught the alternate path home, I saw Stella over to the left of me and it didn't look like she had moved from the place I last saw her while we began our walk. 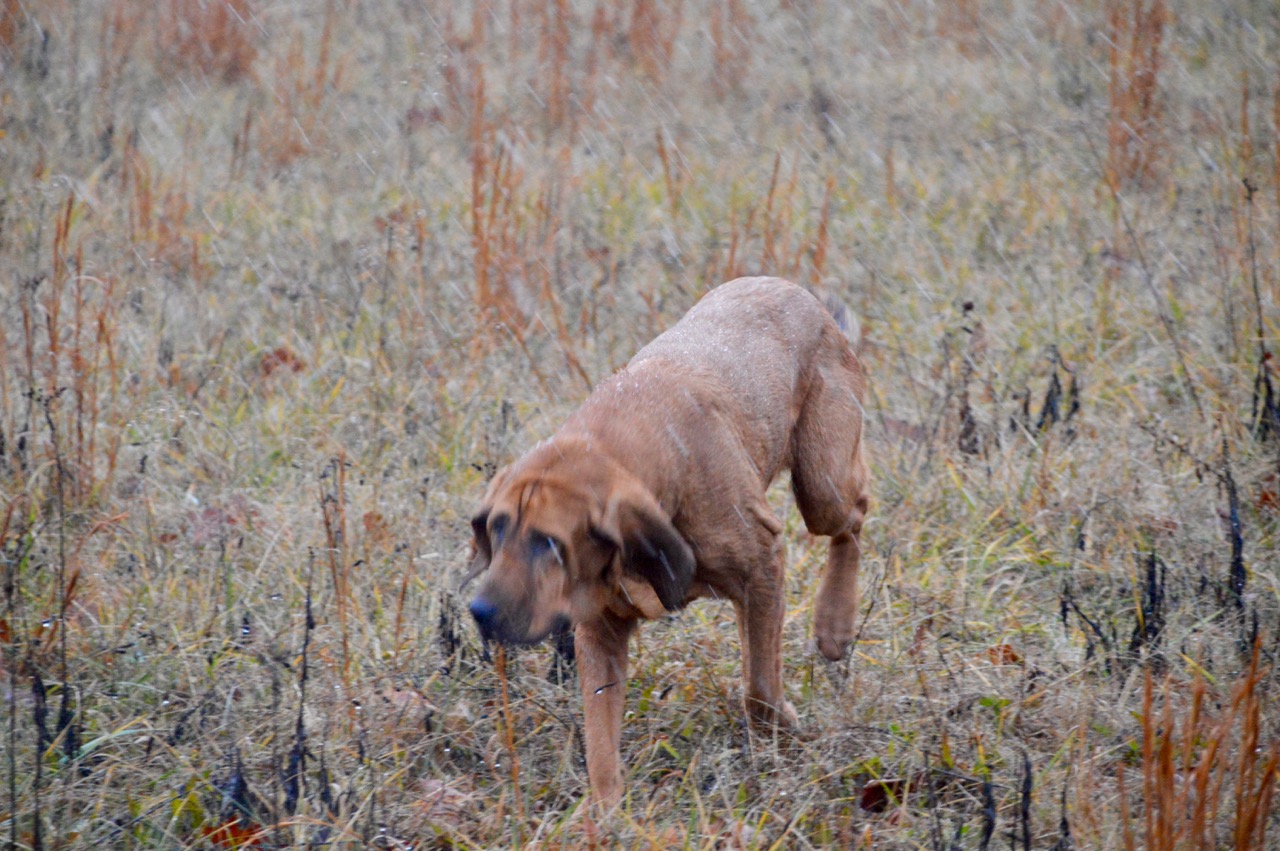 She wasn't happy about it but decided to trot toward the house as Sadie and I ran to the house. It was more rain than snow at this time. 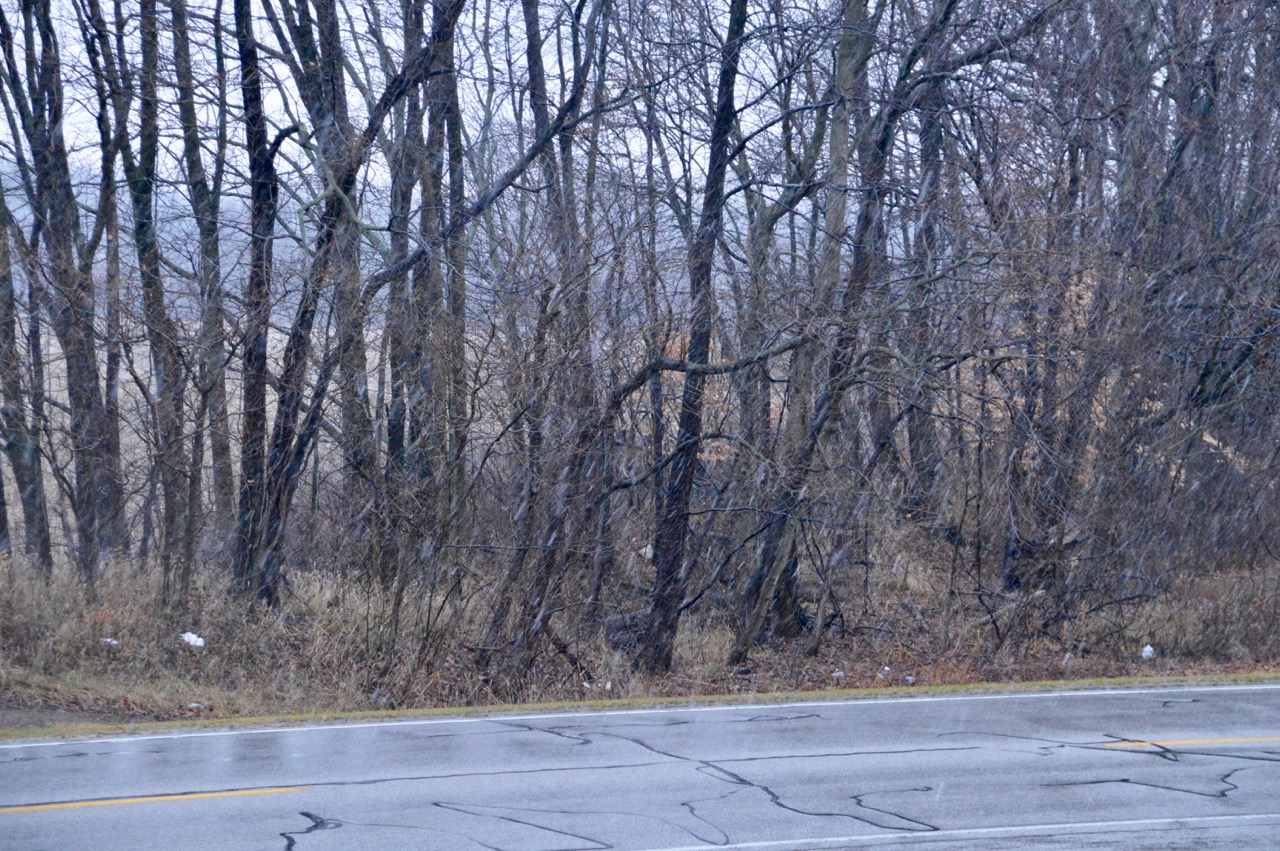 It's hard to tell from this photo, as you can see the sleet ... a little after 9am, just like they forecasted. I poured another cup of coffee once inside and sat at the kitchen table watching the weather. A pot of chili was started right before we went on our walk. 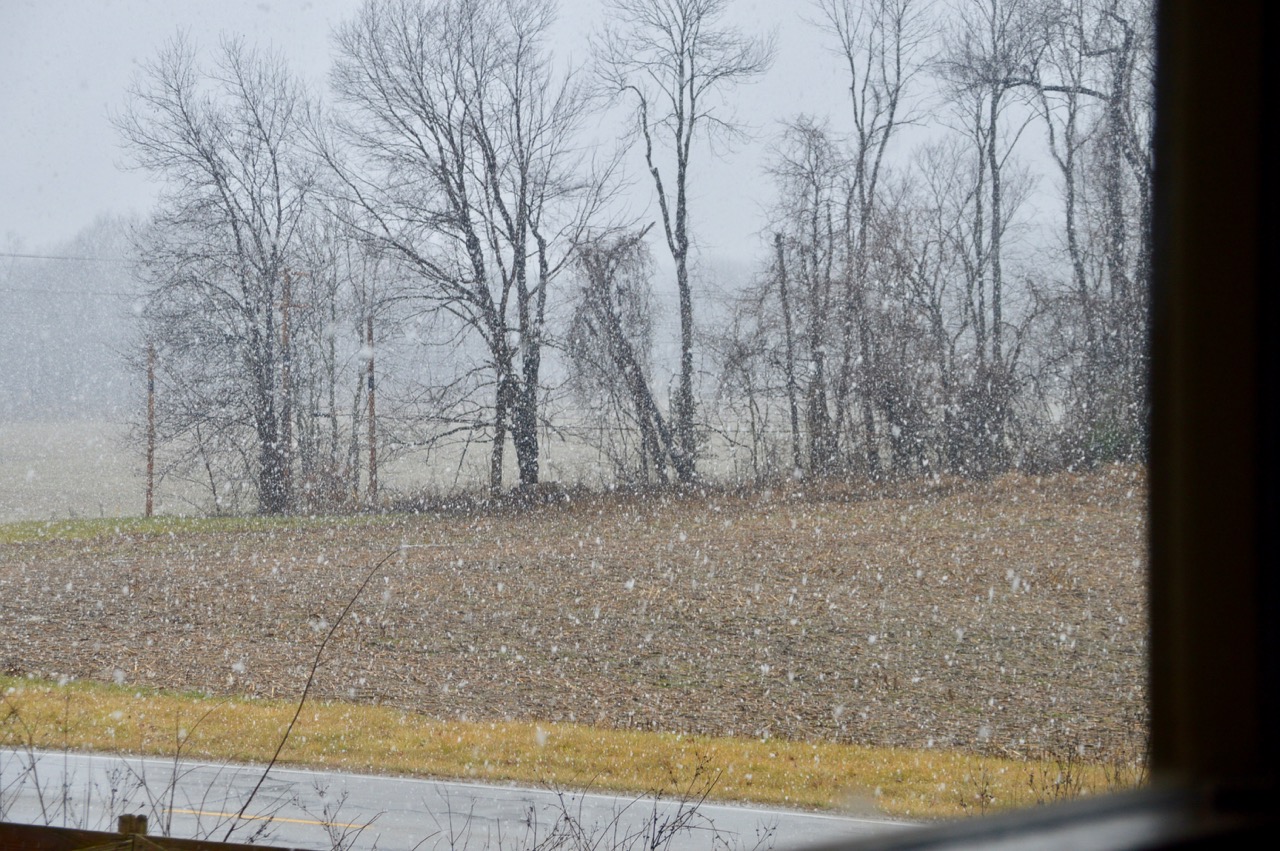 About an hour and a half later it started snowing hard with huge flakes of snow. Based on what I heard on tv last night, this would not amount to much more than a 1/4 inch where we are. Once again, north of I-70 would be getting 1"-3" accumulation, which is 75 miles north of us. 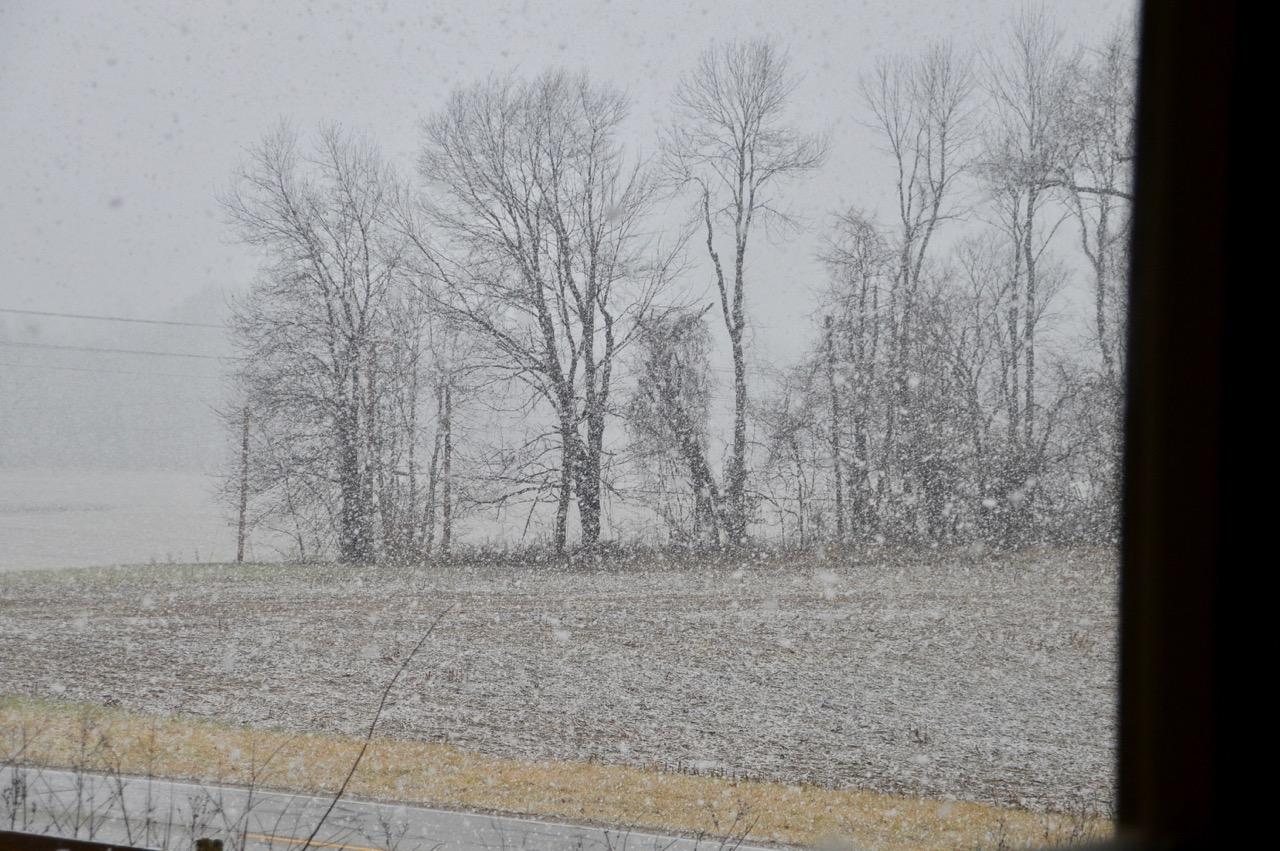 With the temps dropping, it started to stick. It kept coming down harder and I was beginning to wonder if the weatherman was just a little off in his prediction from last night. 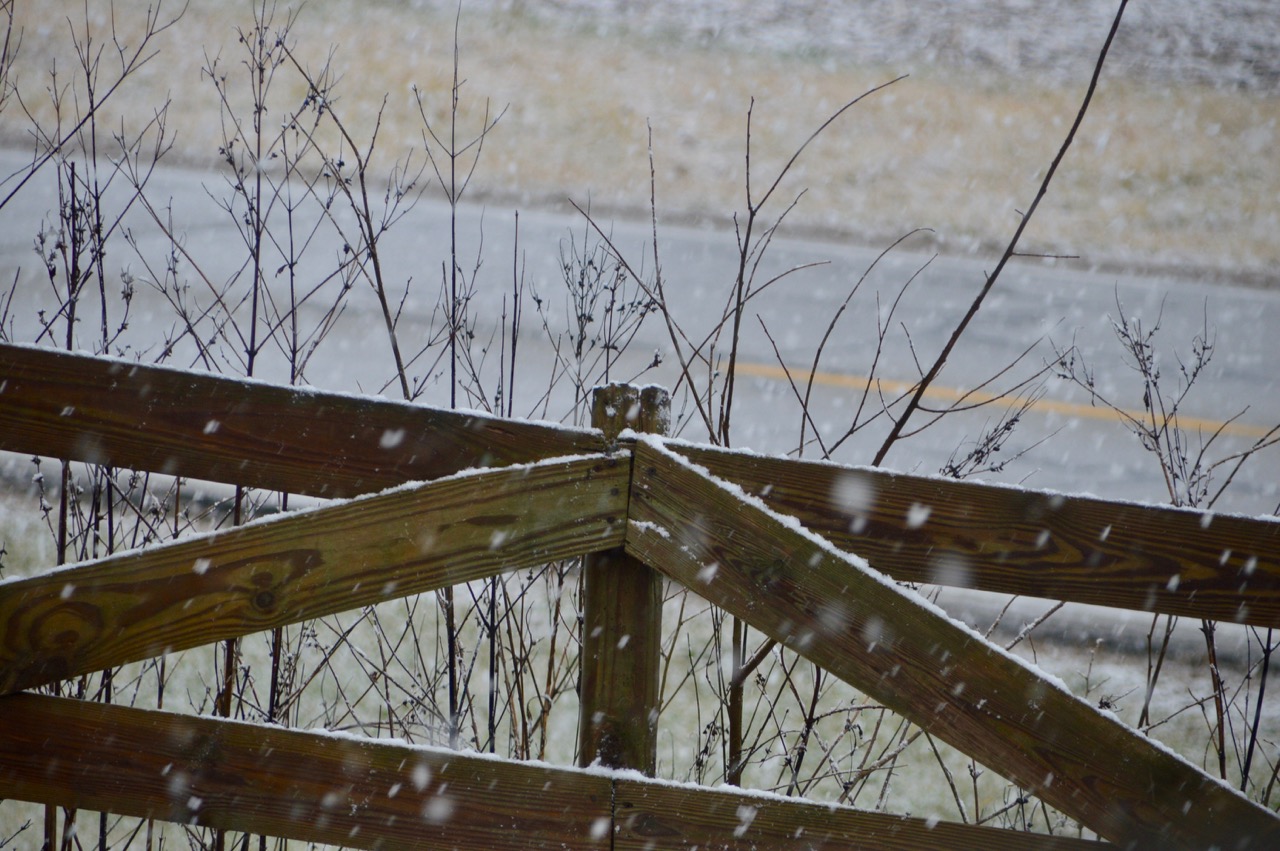 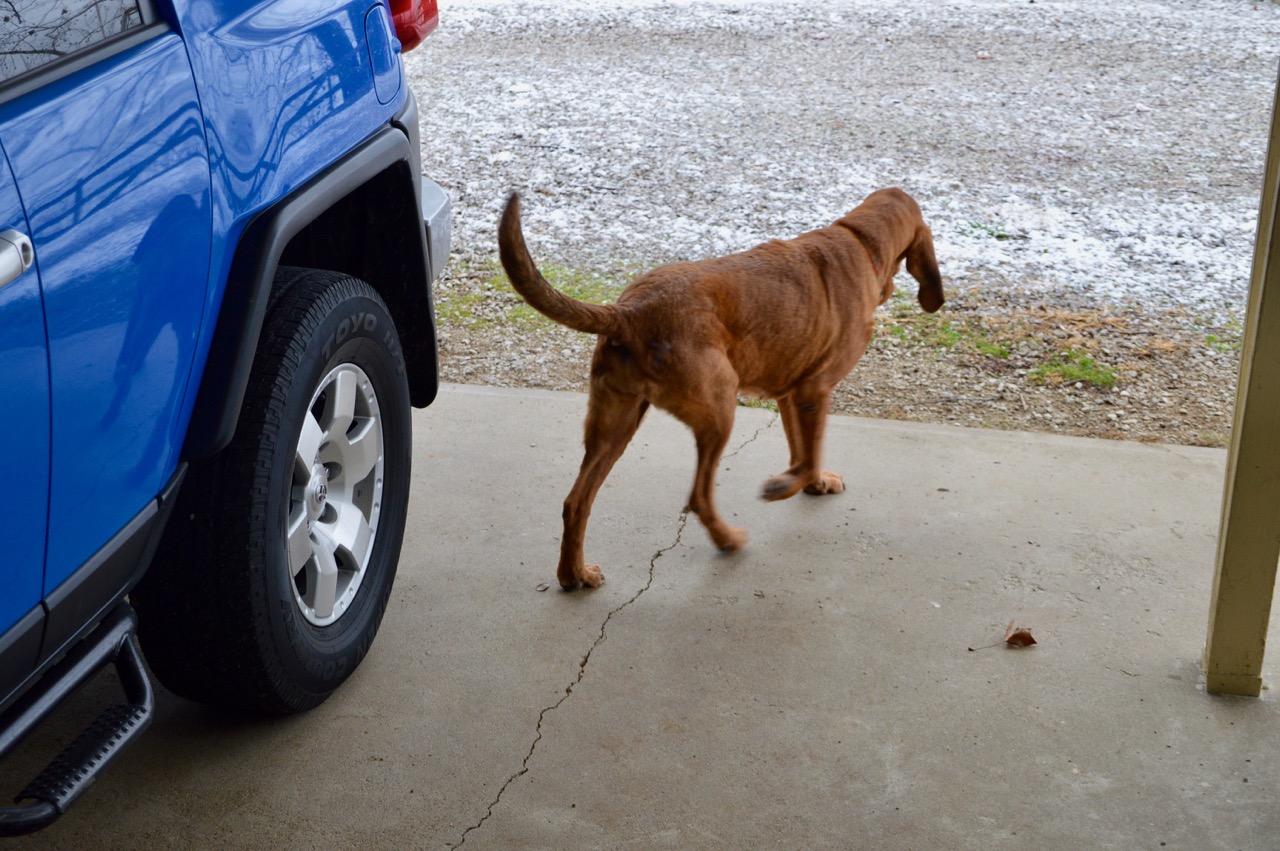 With the snow sticking I wanted to take the hounds outside to check it out before they had lunch. Normally the snow will energize them into playing or running around the backyard but not today.  Even Stella wasn't sure that she wanted to go any further than the carport. 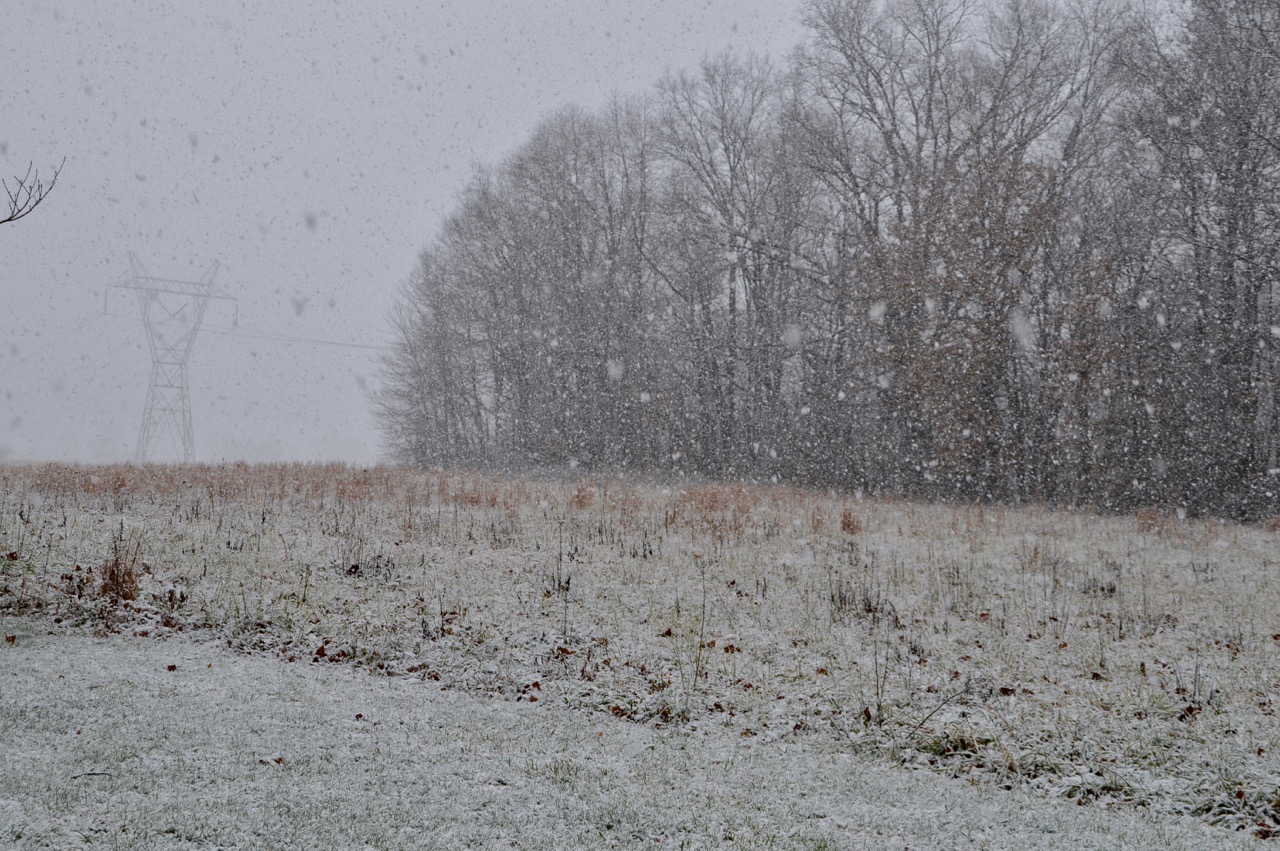 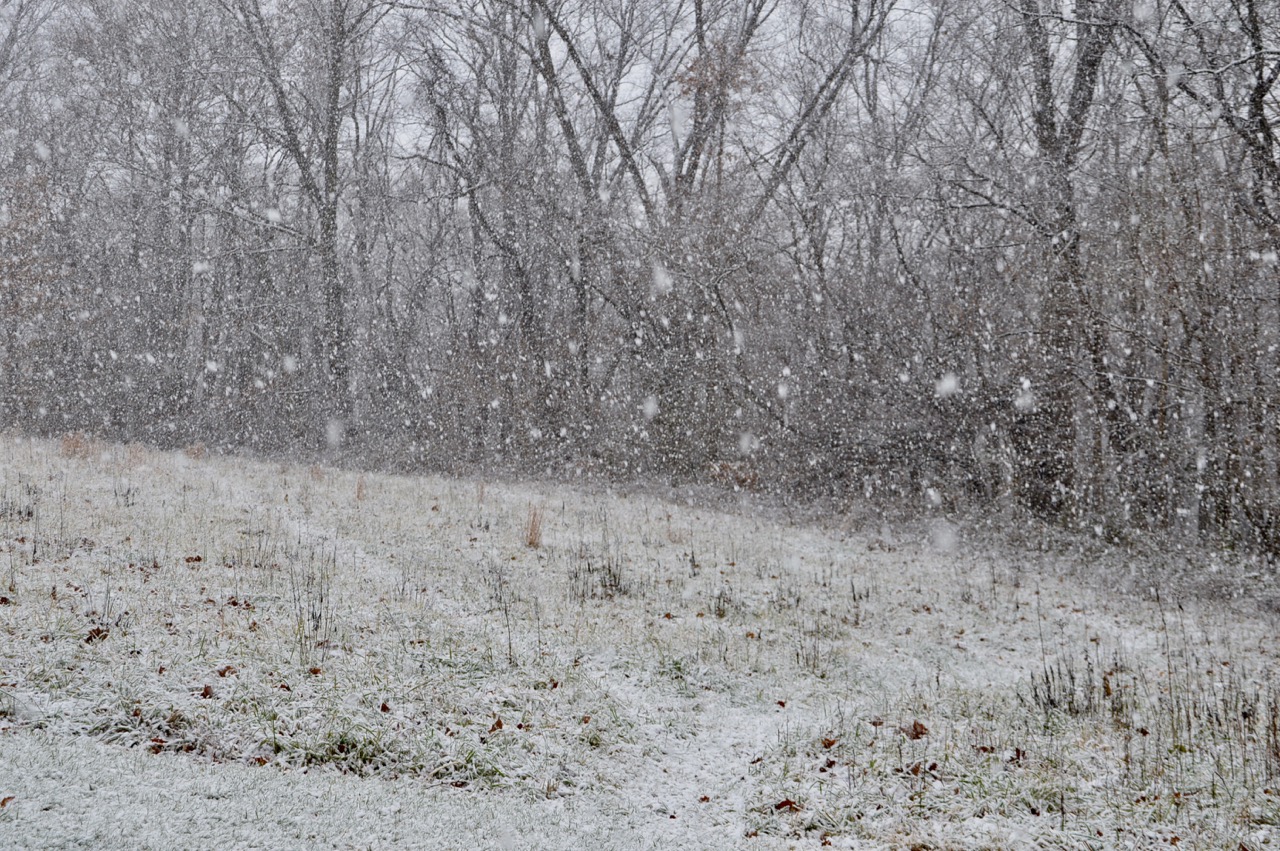 Stella was more interested in frozen natural protein laying around, while Sadie acted as if she wanted to go back inside and continue her late morning nap, and wondering why Stella didn't follow her. 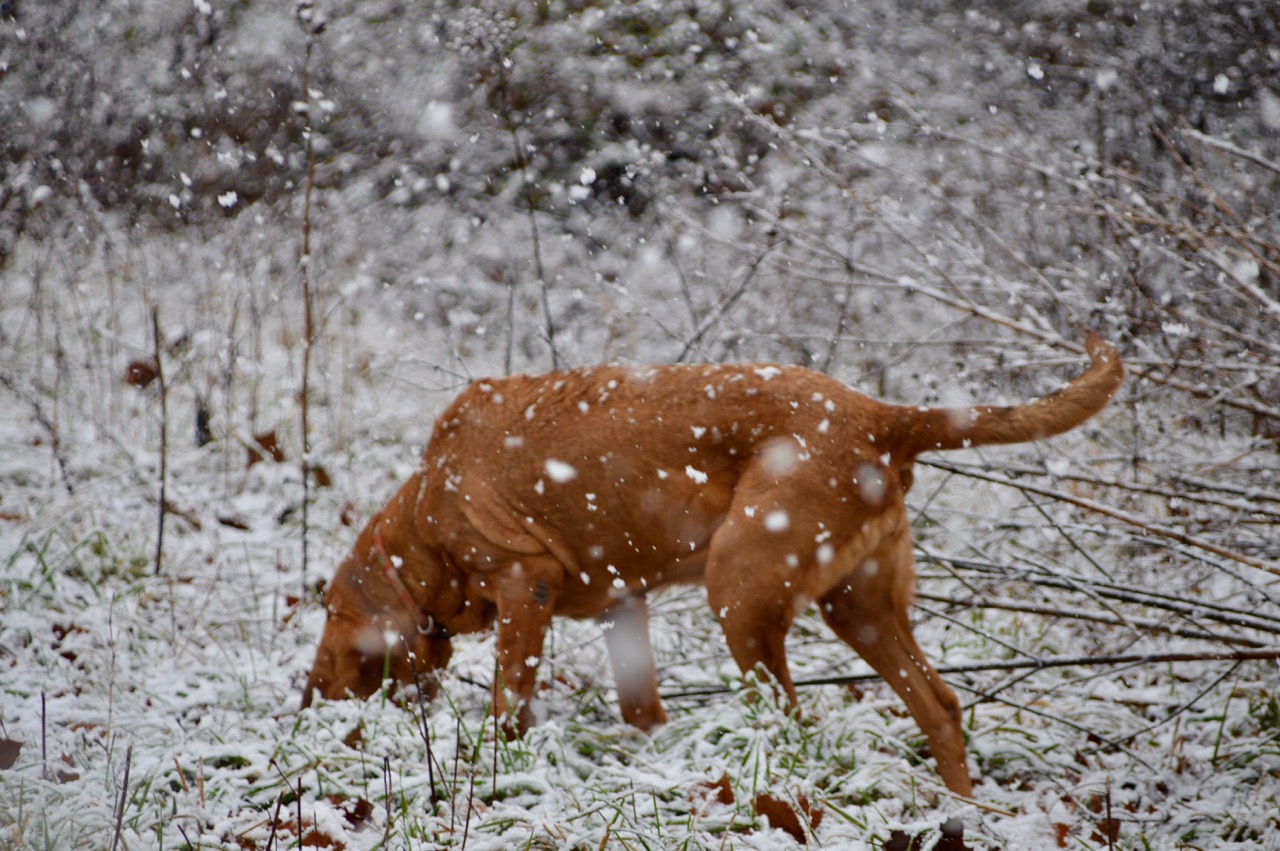 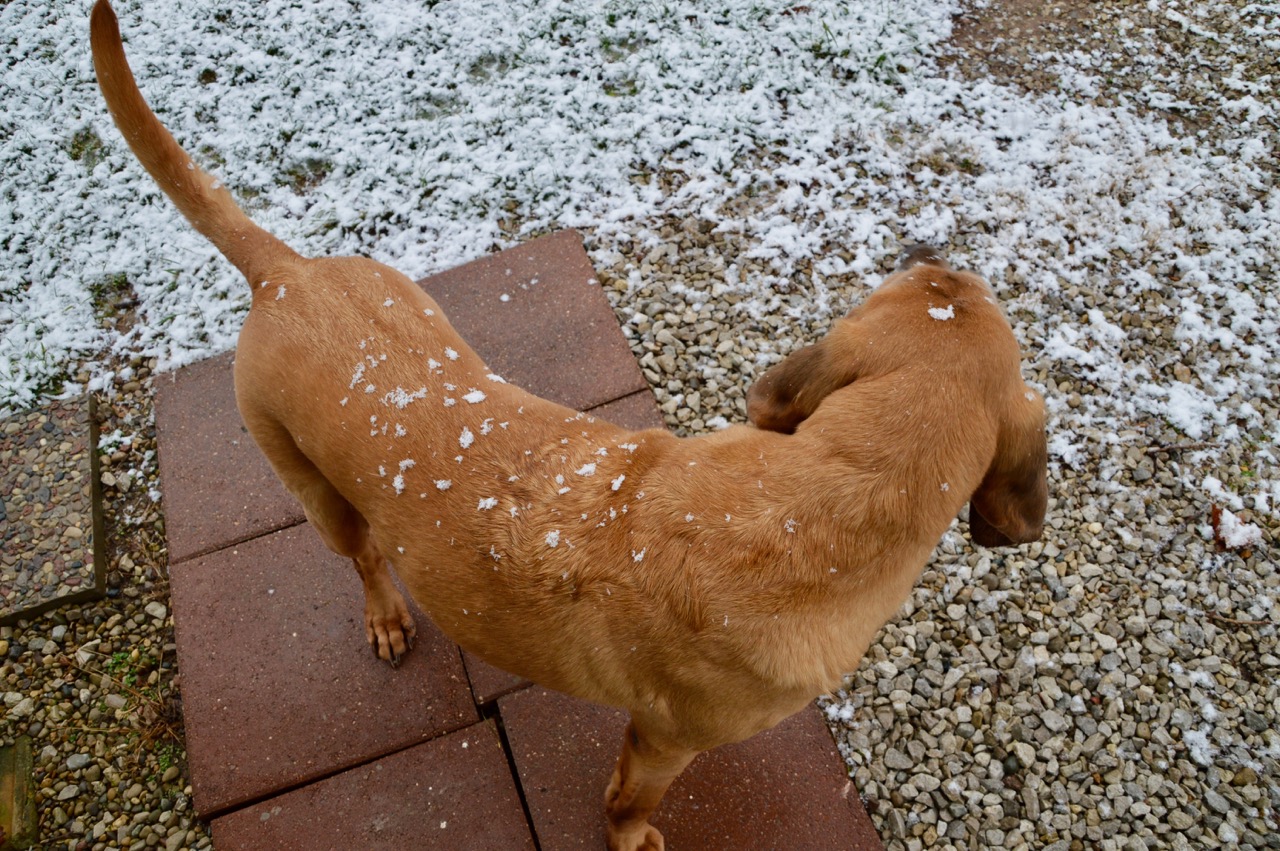 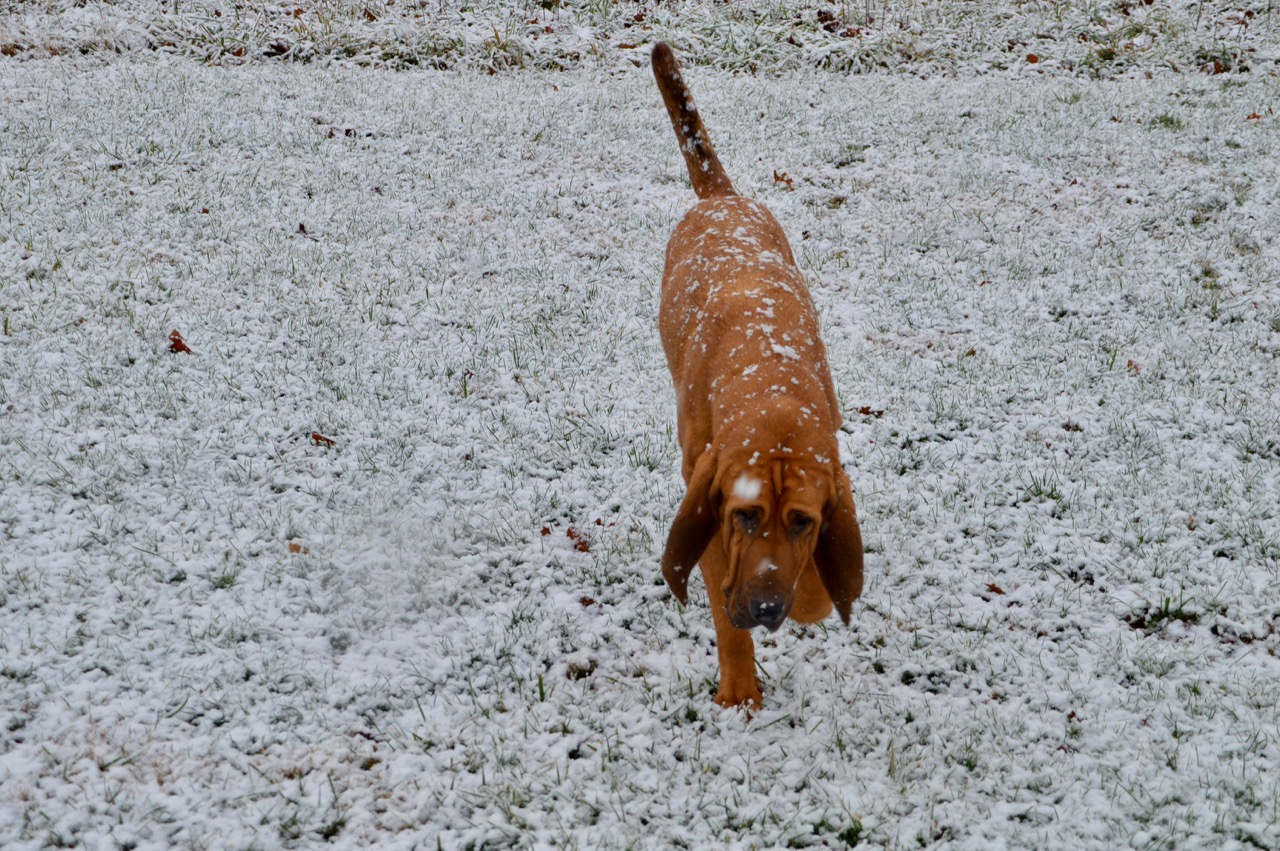 Once Stella heard me say "do you want to eat" ... she didn't hesitate trotting to the house for some lunch. 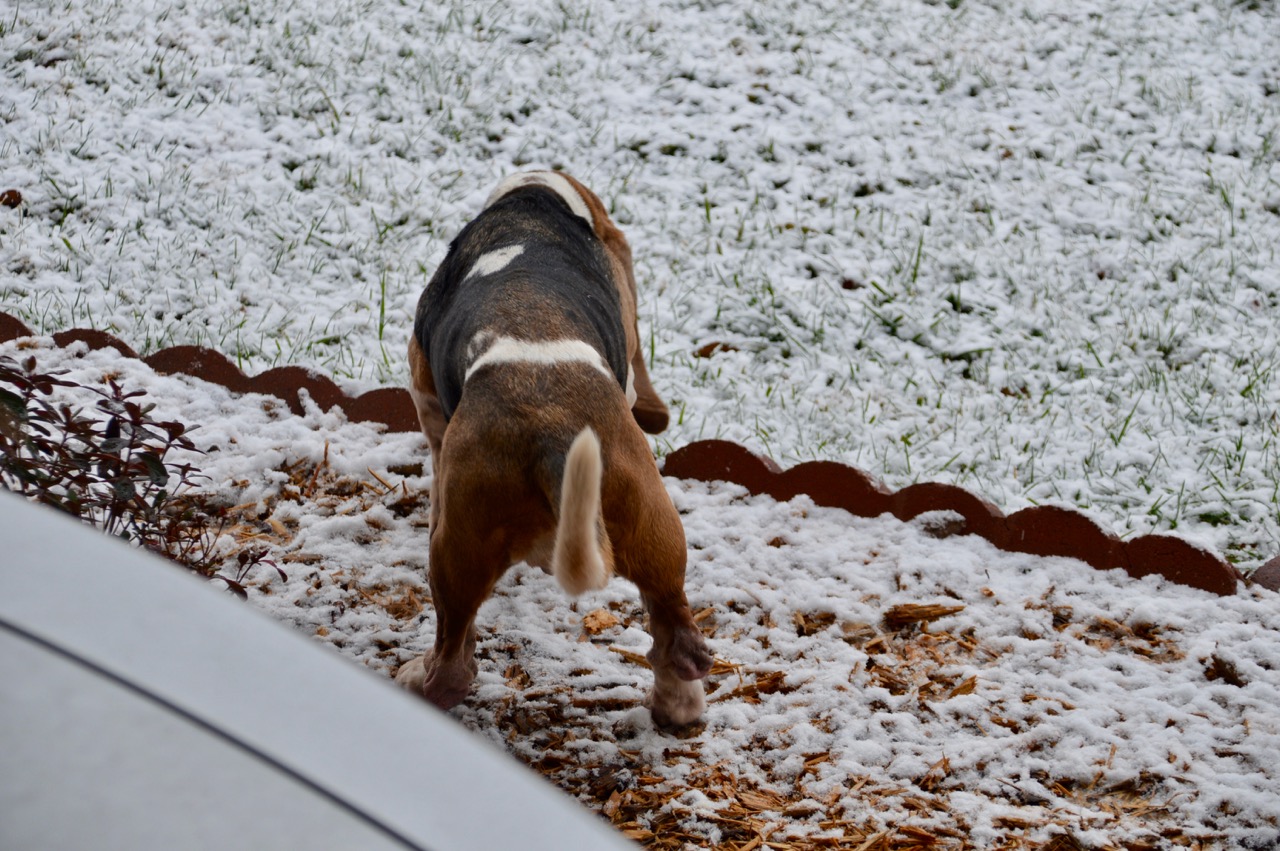 I didn't think Heidi would stay out too long with the weather the way it was. She went to the door after her lunch to go outside but once she stepped off the carport she wasn't sure where her perfect spot was to relieve herself. It was already too cold for me, so I stepped back inside and waited for her. To my surprise she took off around the front of the house to do a lap around the house while staying underneath the overhang. It wasn't longer than 5 minutes after she stepped outside that the snow stopped. It went from snowing hard with large flakes to nothing ... just like that. 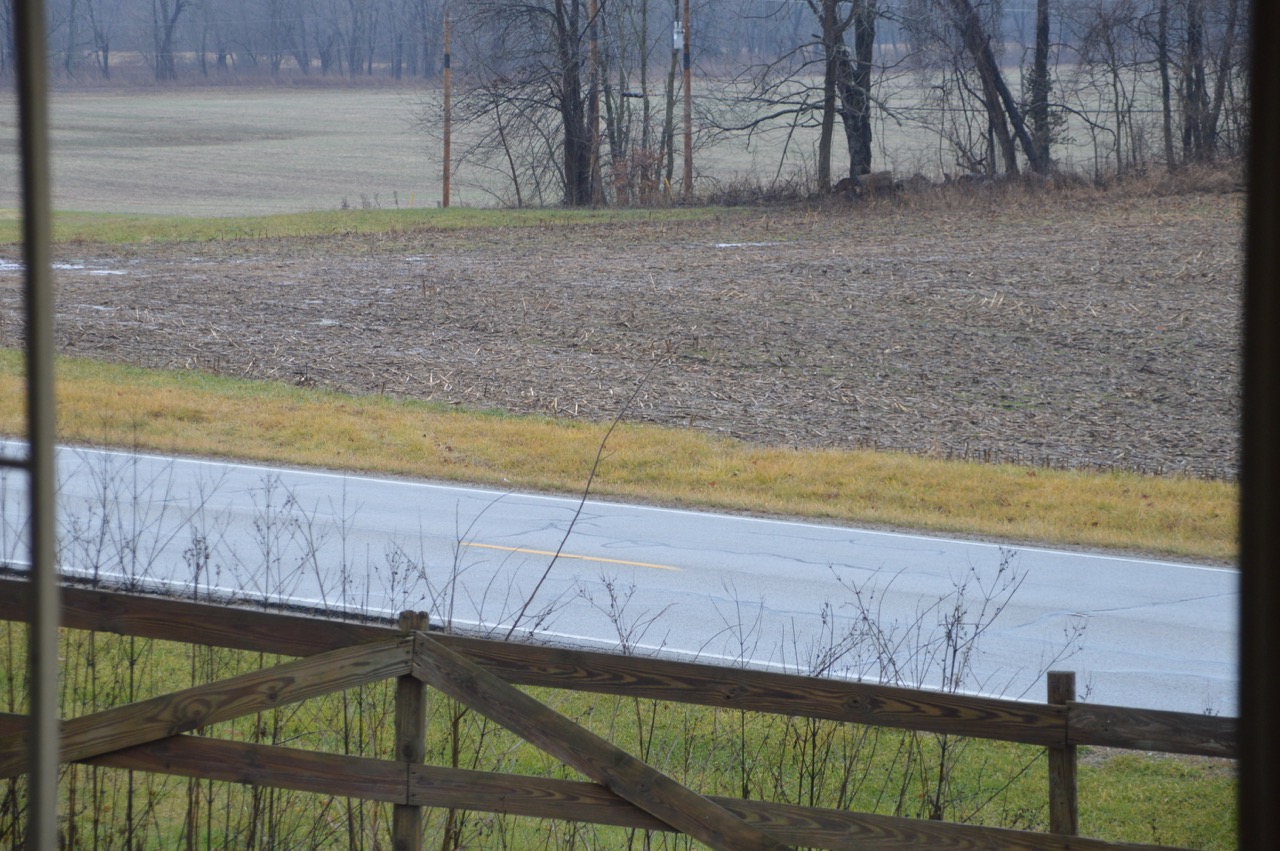 By the time she walked around the FJ heading toward the door where I was waiting for her ... the snow had melted leaving no evidence that it had even snowed today. They were all happy to get back inside. Stella picked up her bone to chew on ... Heidi jumped back up on her sleeping bag for her long afternoon siesta and Sadie fell asleep guarding her water bowl.

With it getting colder we don't have anymore plans for being outside today except when they want to go outside to pee. I started my 'movie marathon' last night and have a stack of DVDs from my movie shelf that I want to watch. I may or may not fit in a couple of NFL games today. Playing a game outside in Green Bay, Wisconsin later tonight could be an interesting game to watch on tv.

First snow of this winter, here in 'the tropics' of Southern Indiana.
at December 23, 2017