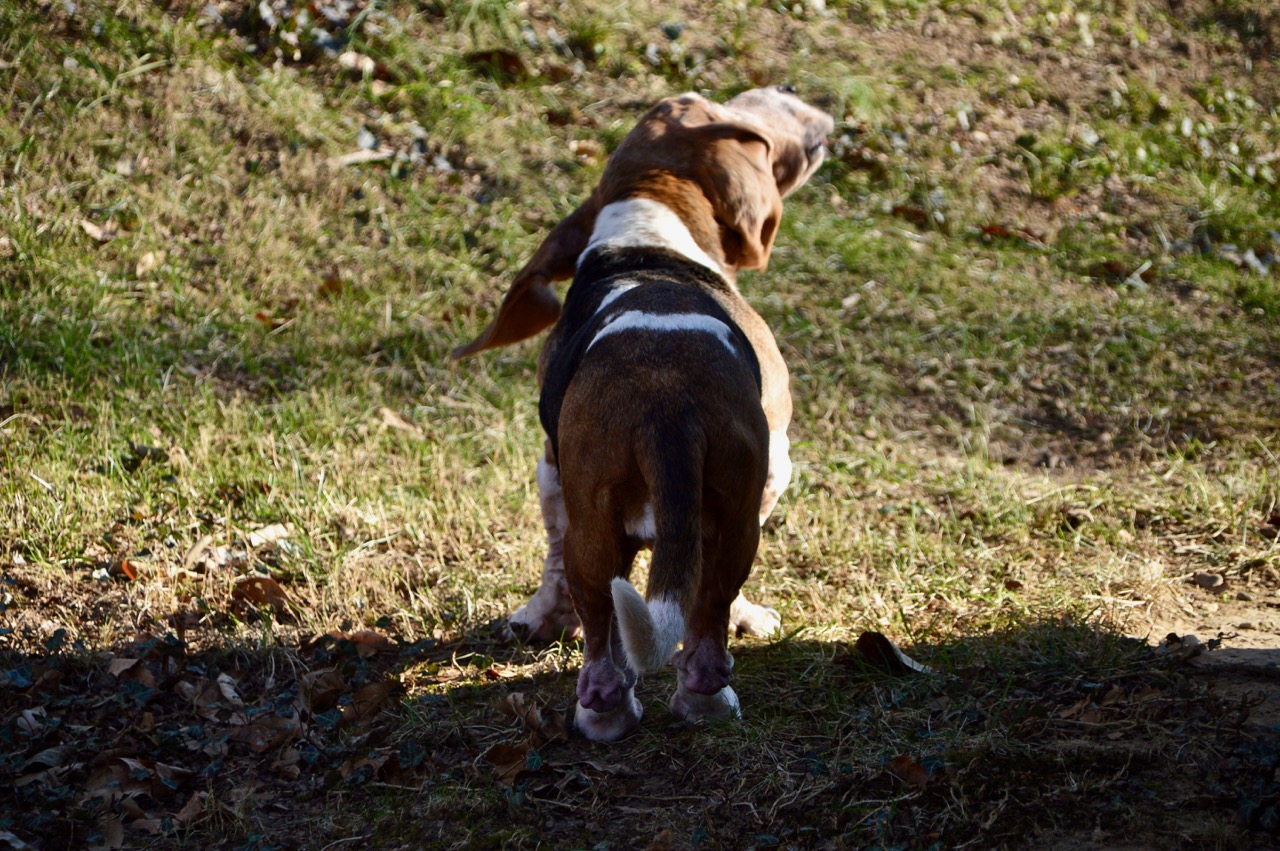 Little did I know when I snuck up behind Heidi on Saturday that I would be 'out of commission' on Sunday. She was doing her lap around the house in great weather on Saturday when I took these first two pictures. That small amount of sunshine can definitely make a winter day feel much different and is always welcomed. 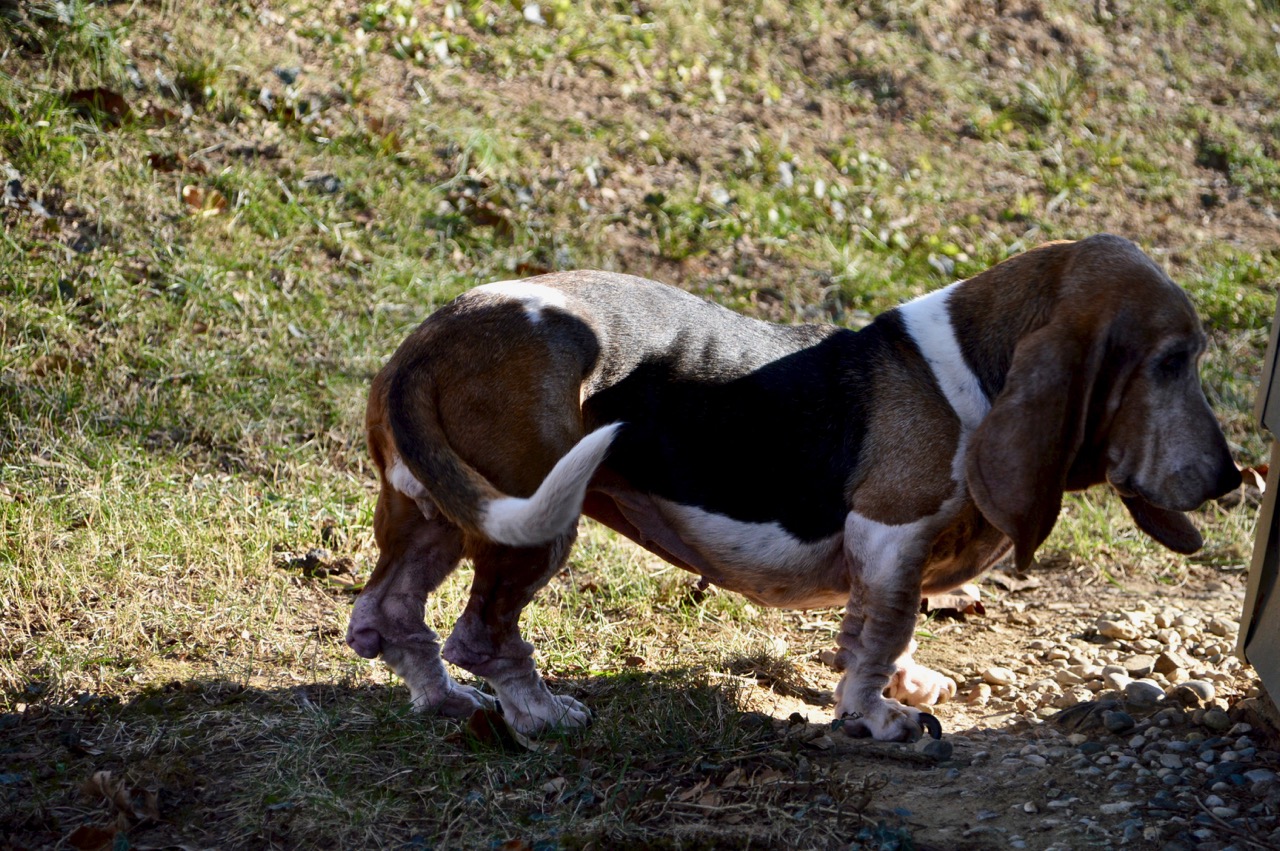 Heidi is pretty set in her ways. I have found that basset hounds are not as stubborn as bloodhounds but it is part of the pedigree. So the times I have tried to get Heidi outside in previous years has never worked. I guess I could carry her from the couch to outside but she would immediately sprint for the door to go back inside as soon as her paws hit the ground. That would be some exercise for her, I guess. Otherwise she goes outside 2-3 times per day/night to relieve herself and is more than excited when her meals are served. She loves sleep. 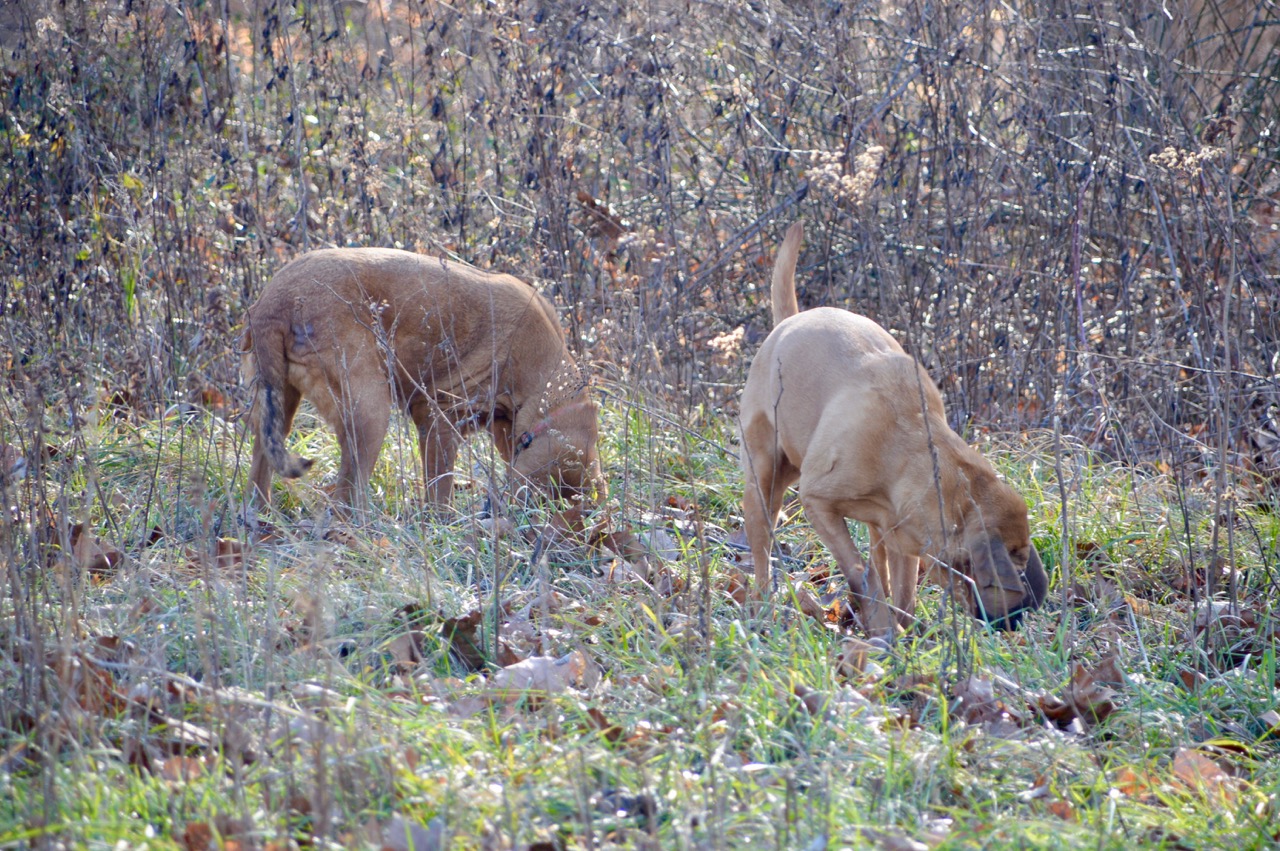 We took our 2nd walk on Saturday with no camera and Stella attached to the retractable leash, giving her 25' to roam. With all the ballgames on tv I didn't have time to take our normal leisure walk and that was the reason she was under my control. Our 'halftime' walks have to be quicker than normal, yet Sadie gets in her nose exercise and some running. It's nothing new to them for Saturday and Sunday afternoons. 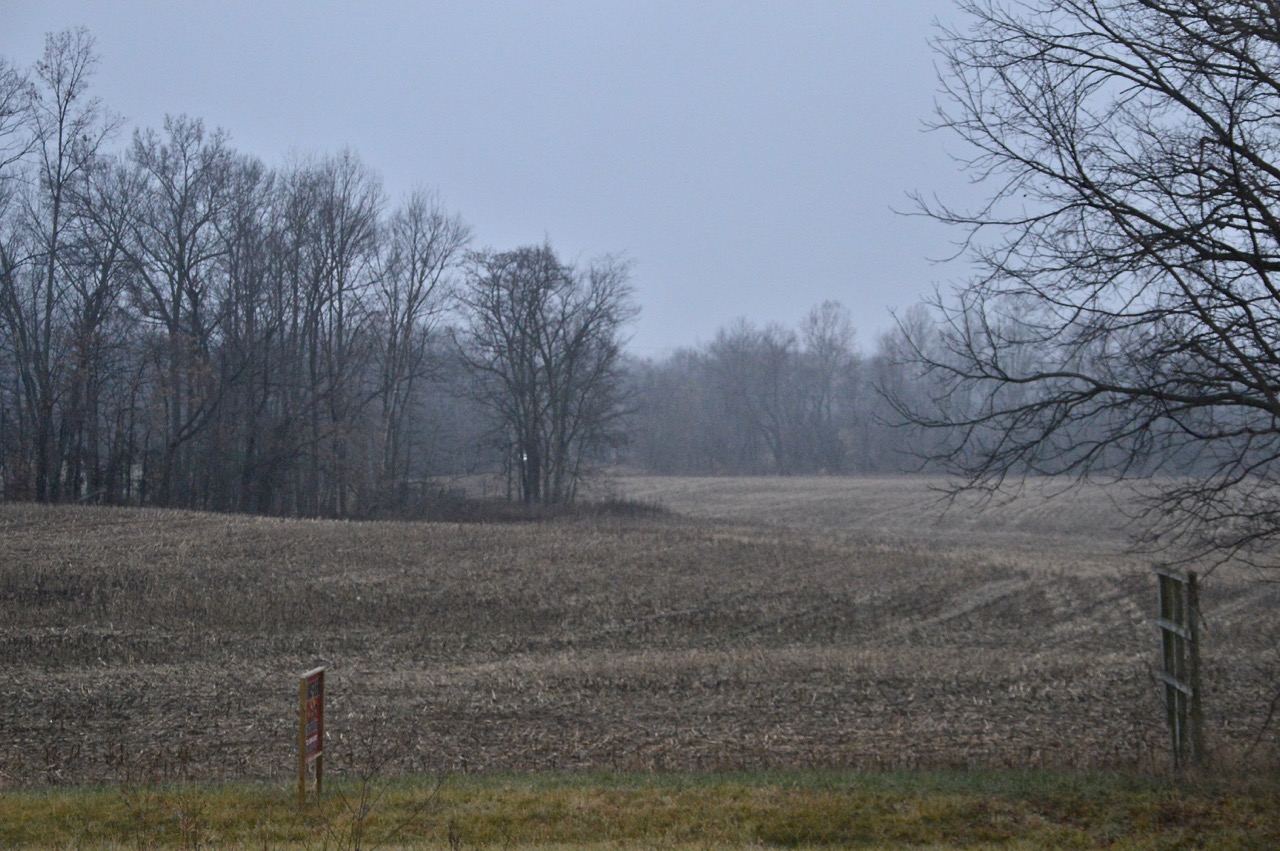 This morning was a different story. All of us woke before dawn and since we did not take any walks yesterday due to my 'sickness', I felt I owed it to Sadie to get started with her first walk as soon as possible. She gave me a lot of 'stare downs' yesterday when she found out I couldn't take her for walks. This morning we found fog, and a light drizzle after daybreak but it was good enough to head outside earlier than normal. 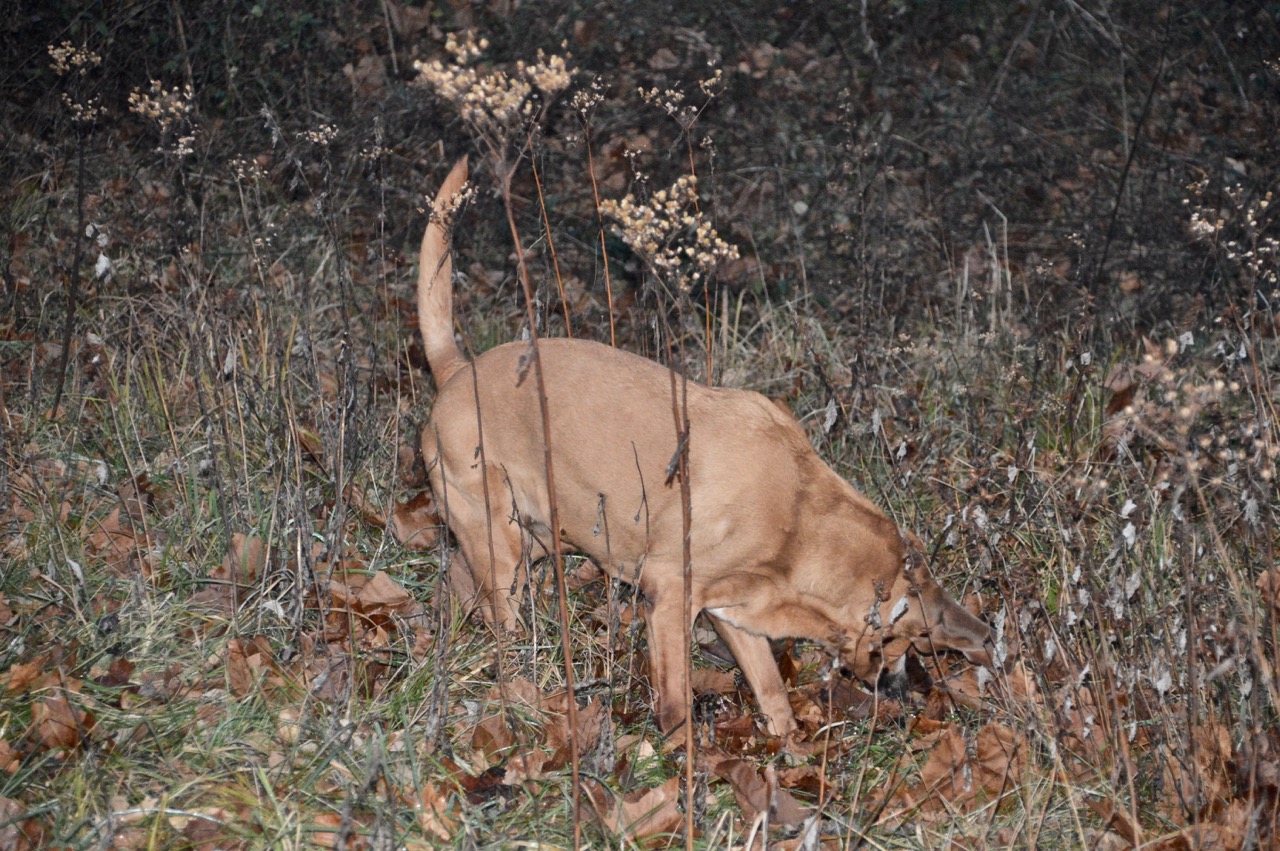 It was dark enough that I used the flash on this first photo and I should have continued to use it. Instead, I had most of my photos turn out too blurry to post and I was still unable to capture the darkness like I wanted to. 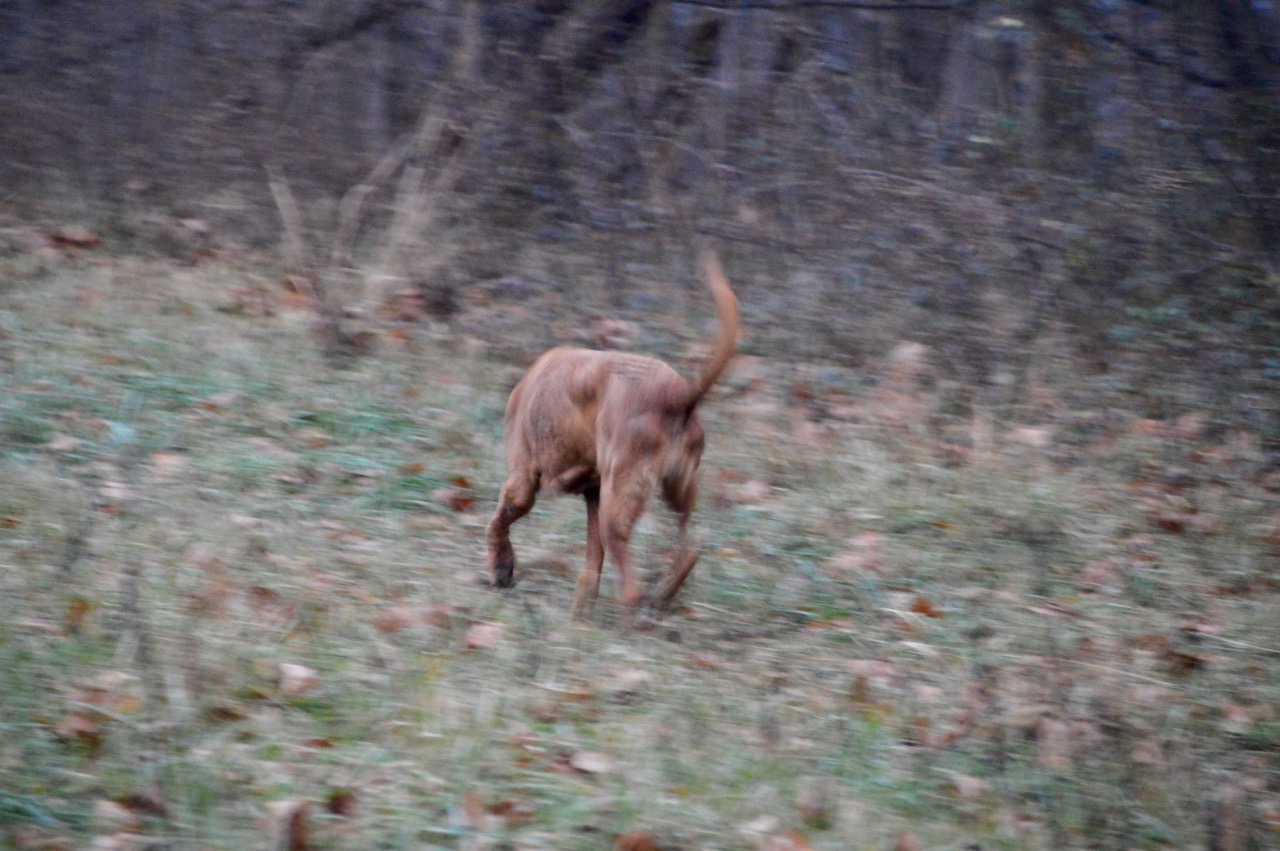 I'm sure that Stella doesn't know the days of the week but she is pretty consistent in coming up with a new routine on Mondays. Why I don't know but she started one this morning. By routines, I mean what areas of the field she will wander off to while Sadie and I continue to make the whole walk. 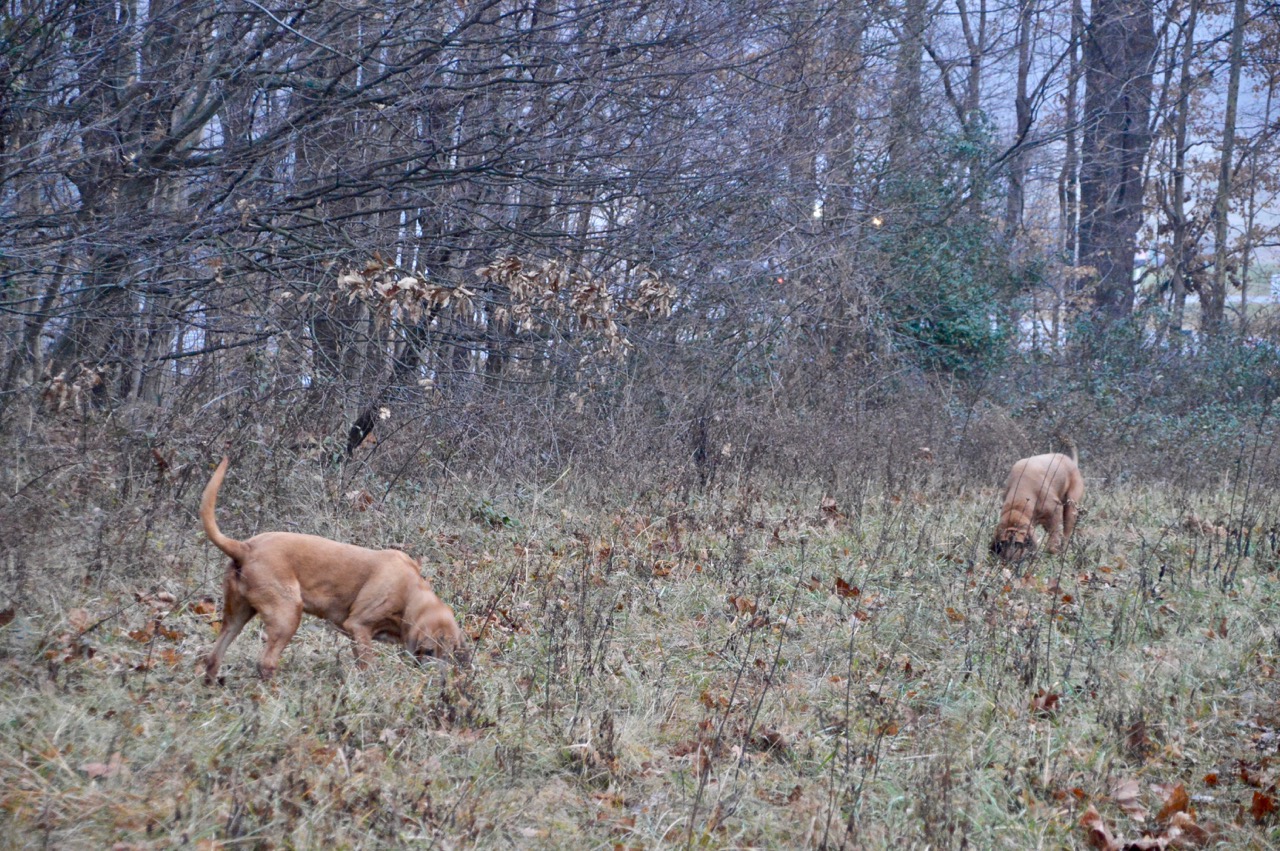 With it feeling warm and the field not being too wet after our overnight 0.01" of rain, it was a good morning to walk. I didn't really know there was a drizzle until the small spots started to cover the sleeves of my jacket. 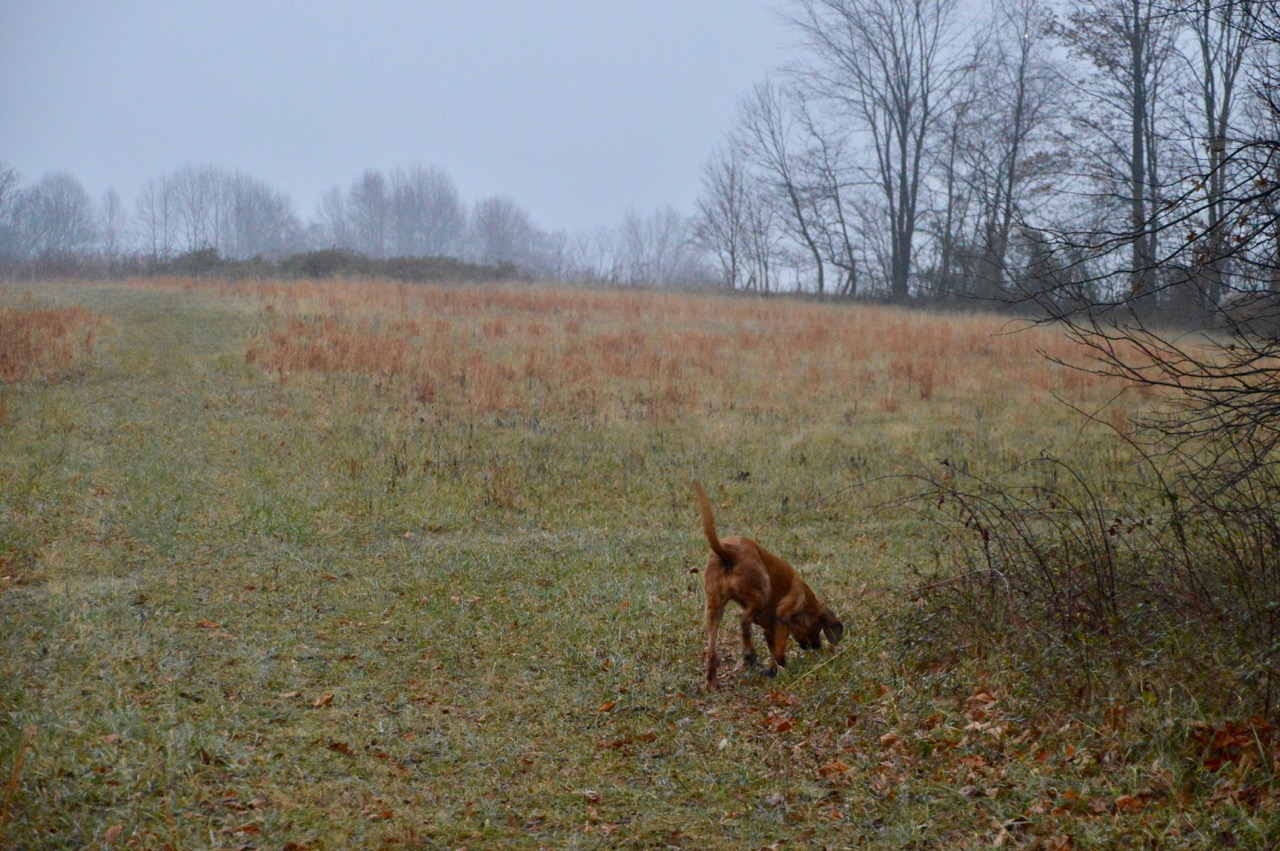 With the low light and my unsteady hands (evidently) I am posting more photos than normal this morning that are blurry. 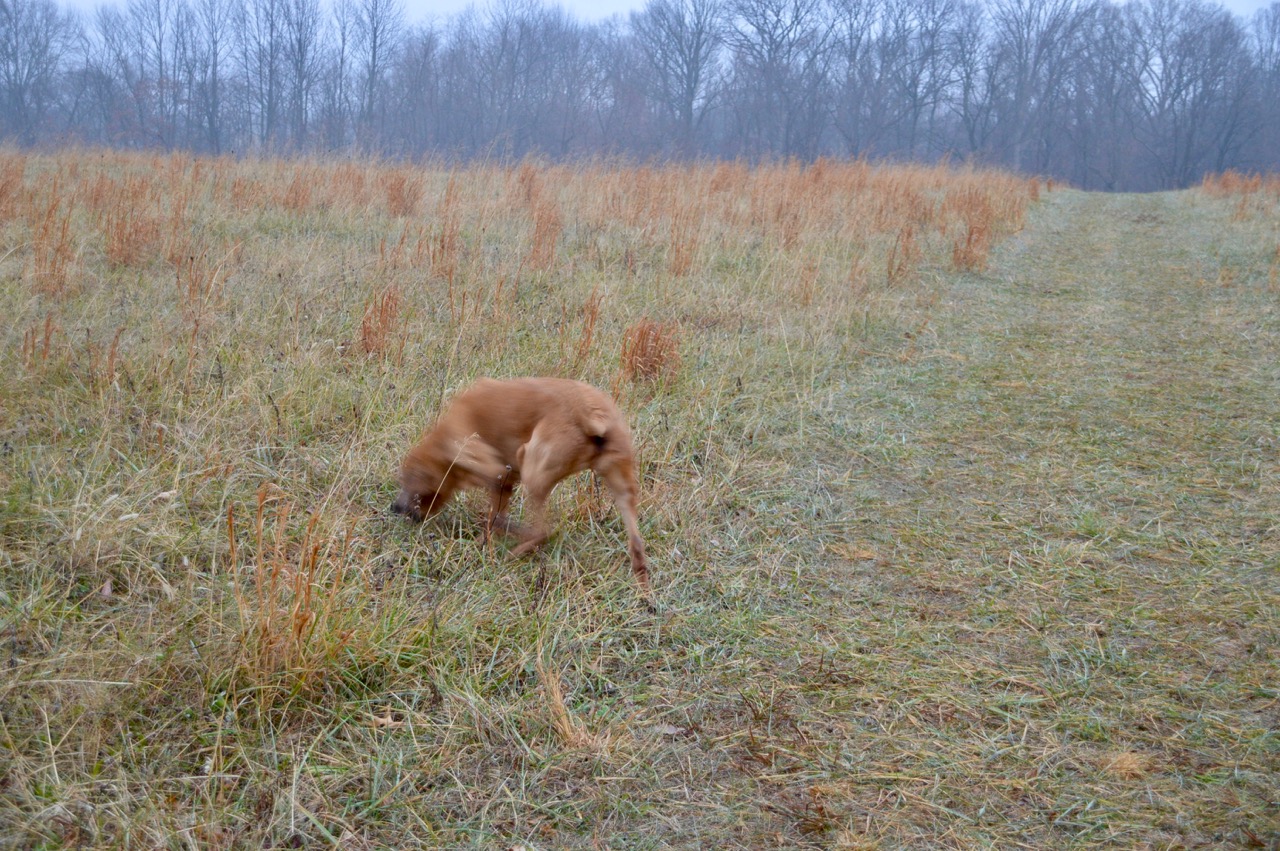 With that drizzle becoming a little more prominent I cut off my walk on the back side of the field and turned onto the ATV path. It's not a lot of difference in distance but is shorter and is usually taken when the weather is bad. Sadie doesn't mind, she can exercise her nose anywhere. 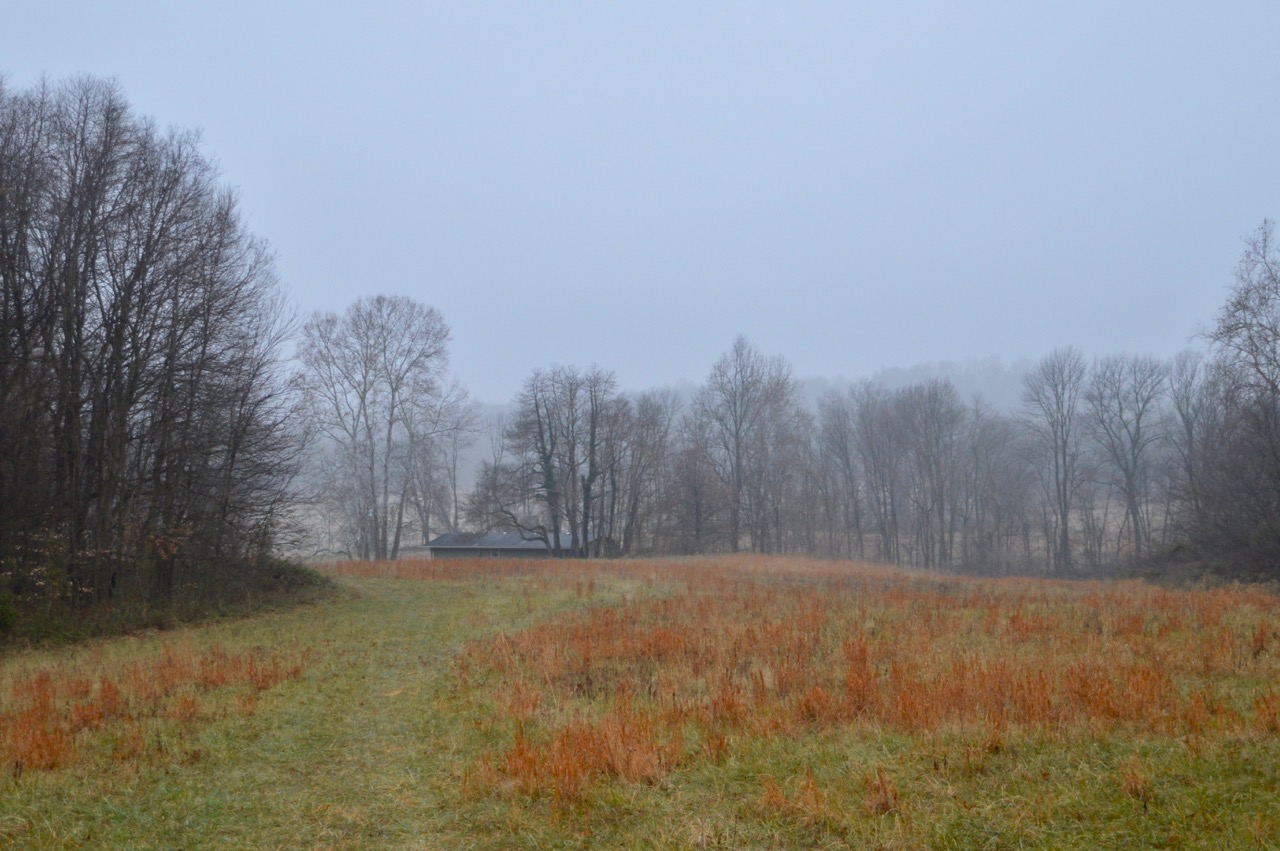 This gives you some idea how the early morning looked. Actually it was darker than this photo shows. You can tell the dormant hay is wet. The fog and mist reminds me of my days living on Whidbey Island in the winter. 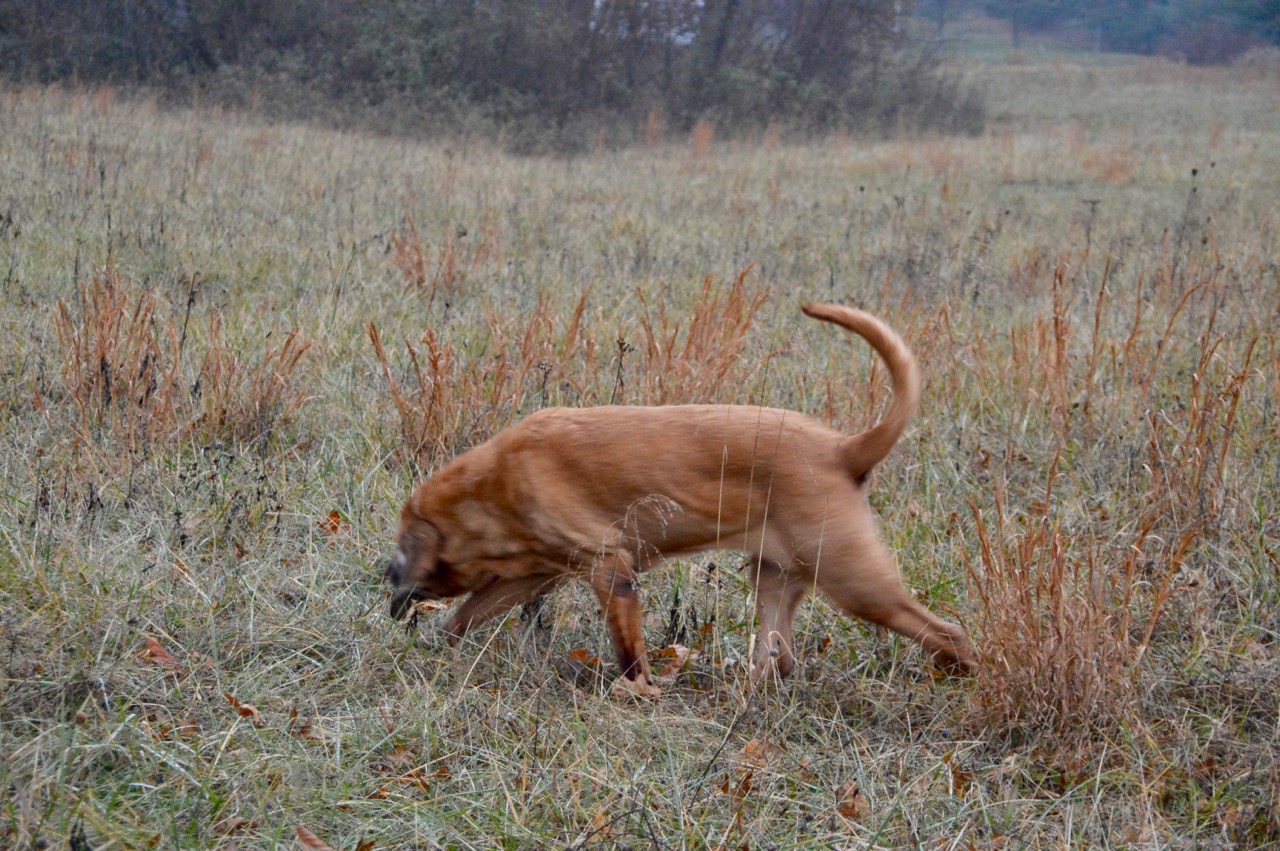 Drizzle, rain, hail, sleet or snow ... doesn't matter to Sadie. Tracking the field is like me needing coffee. 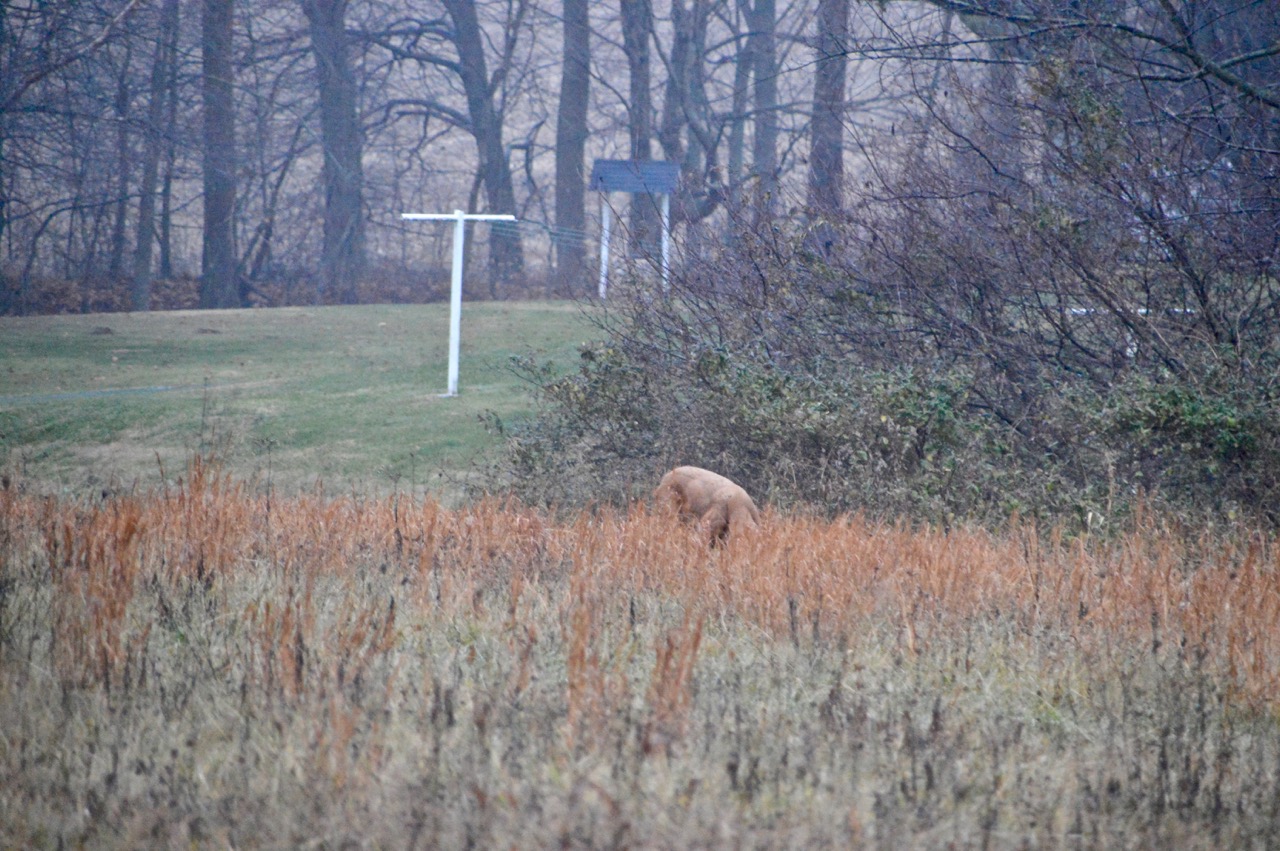 It will be interesting to see if this will be Stella's new area for the next few weeks, during the times I let her hang back on her own. It's not new territory for her, she has always roamed over by the woods behind the neighbor's house but it's been months since she has wandered to this area. 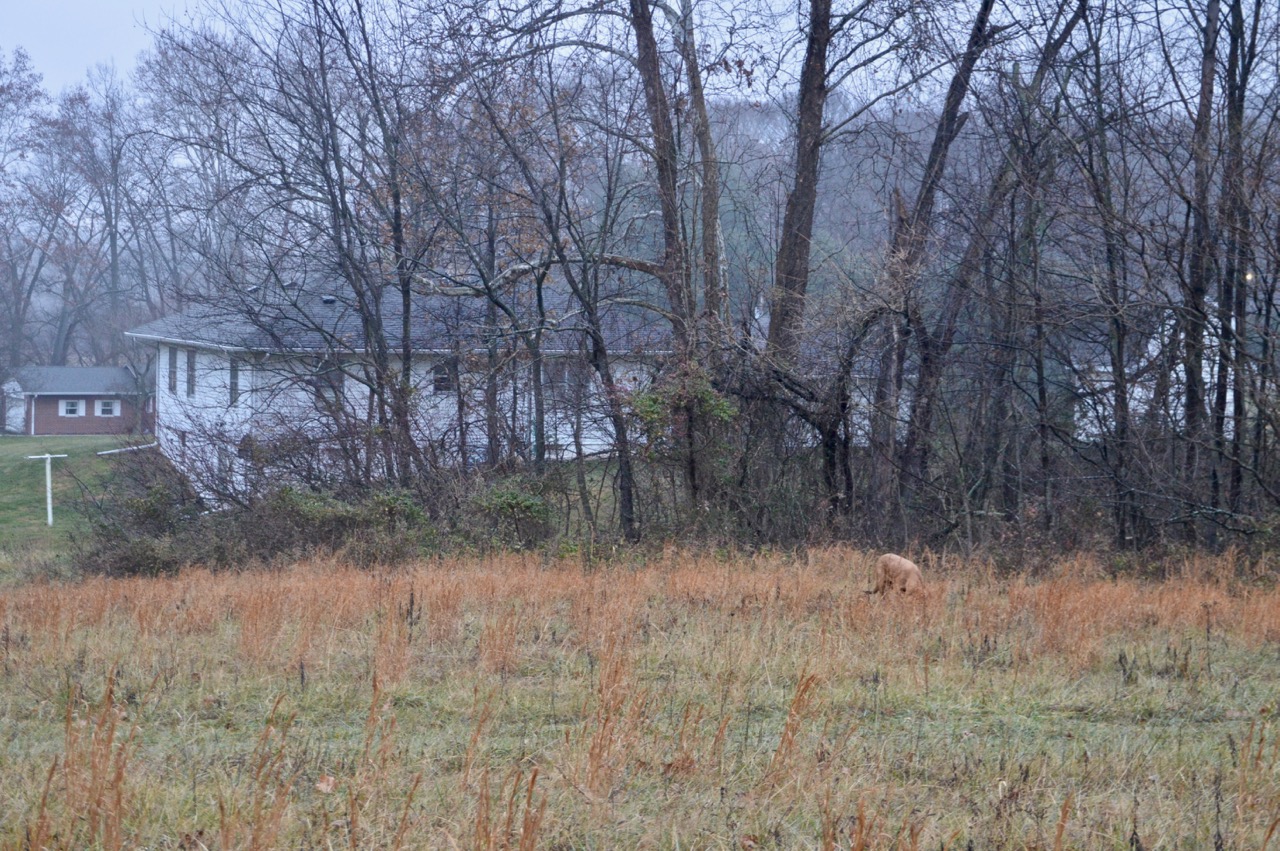 Of course she is not going to come while I call her. It's Monday and she is always more stubborn on that day of the week, than other days. It is not too far off our alternate path but she did not move until I walked right up to her, then she gleefully trotted away to the path without me saying a word. 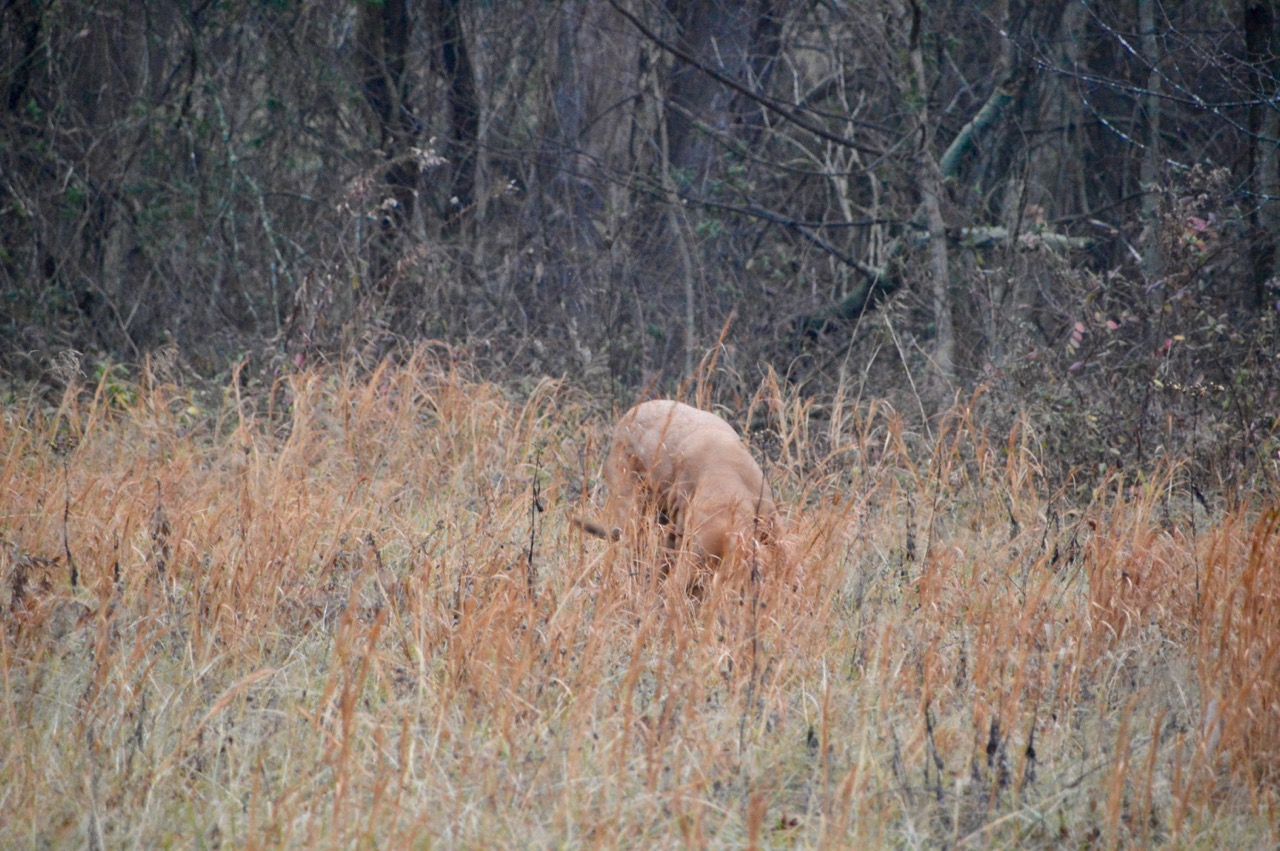 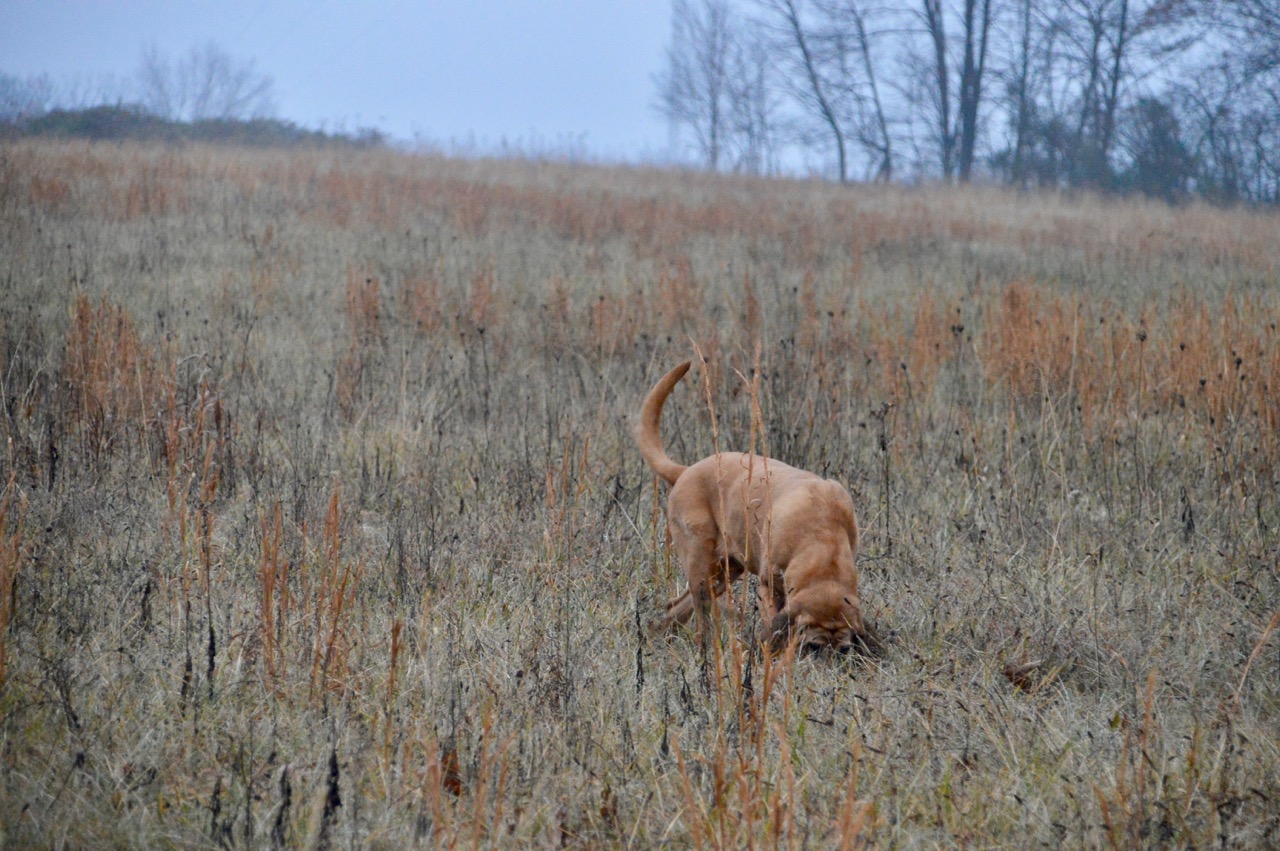 Sadie in the meantime was bring up the rear as Stella and I moved out on the path home. 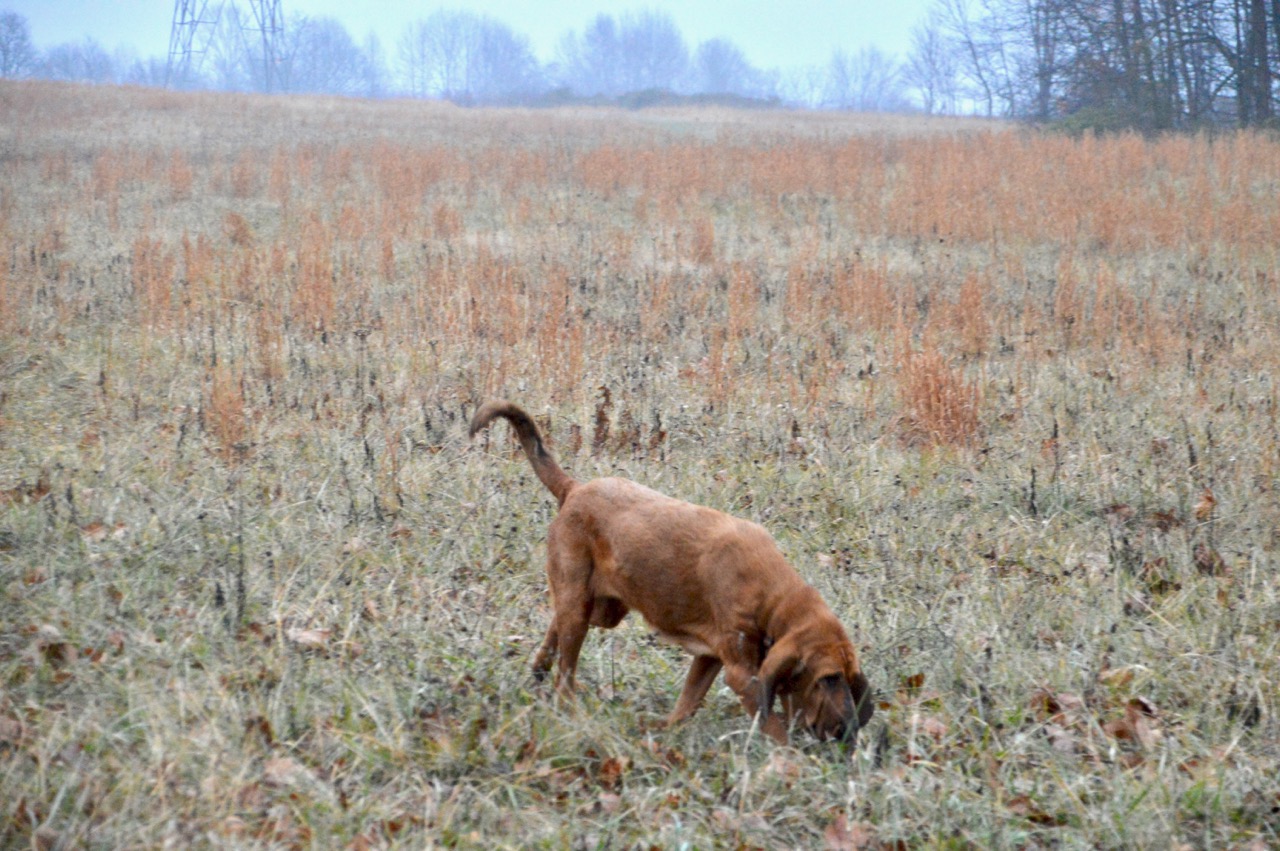 Both hounds will keep searching right up to the yard but once their paws hit the grass they know the walk is over and the next thing on their agenda is a nap until their lunch. Unless there is scent of the field cat or deer. 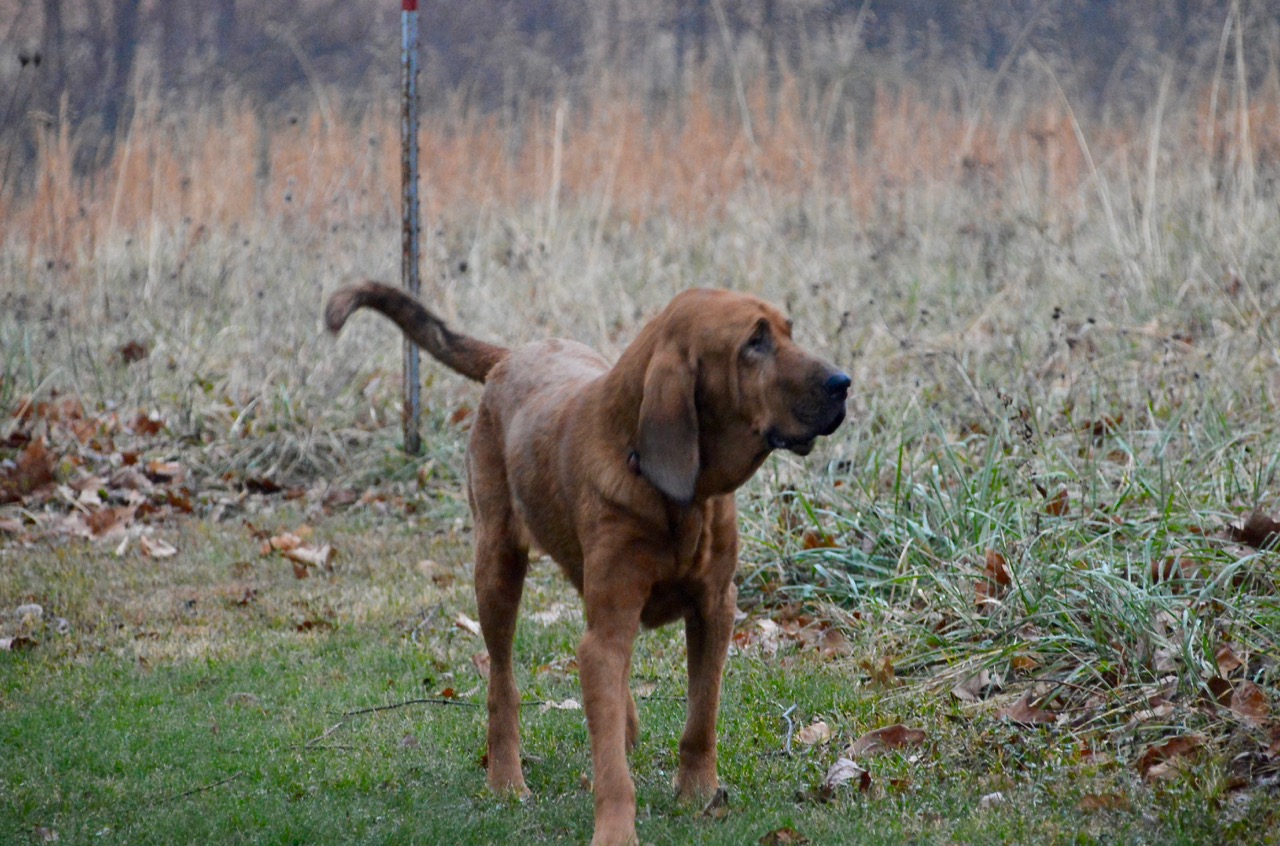 It looks like Stella is ready for another new week. College football has started it's Bowl games and will now start being on tv every day/night from now until after the start of the new year. The routines of the hounds will not change but there might be a few more of those 'halftime' walks, that is at a little faster pace. I love this time of year being the sports junkie that I am. 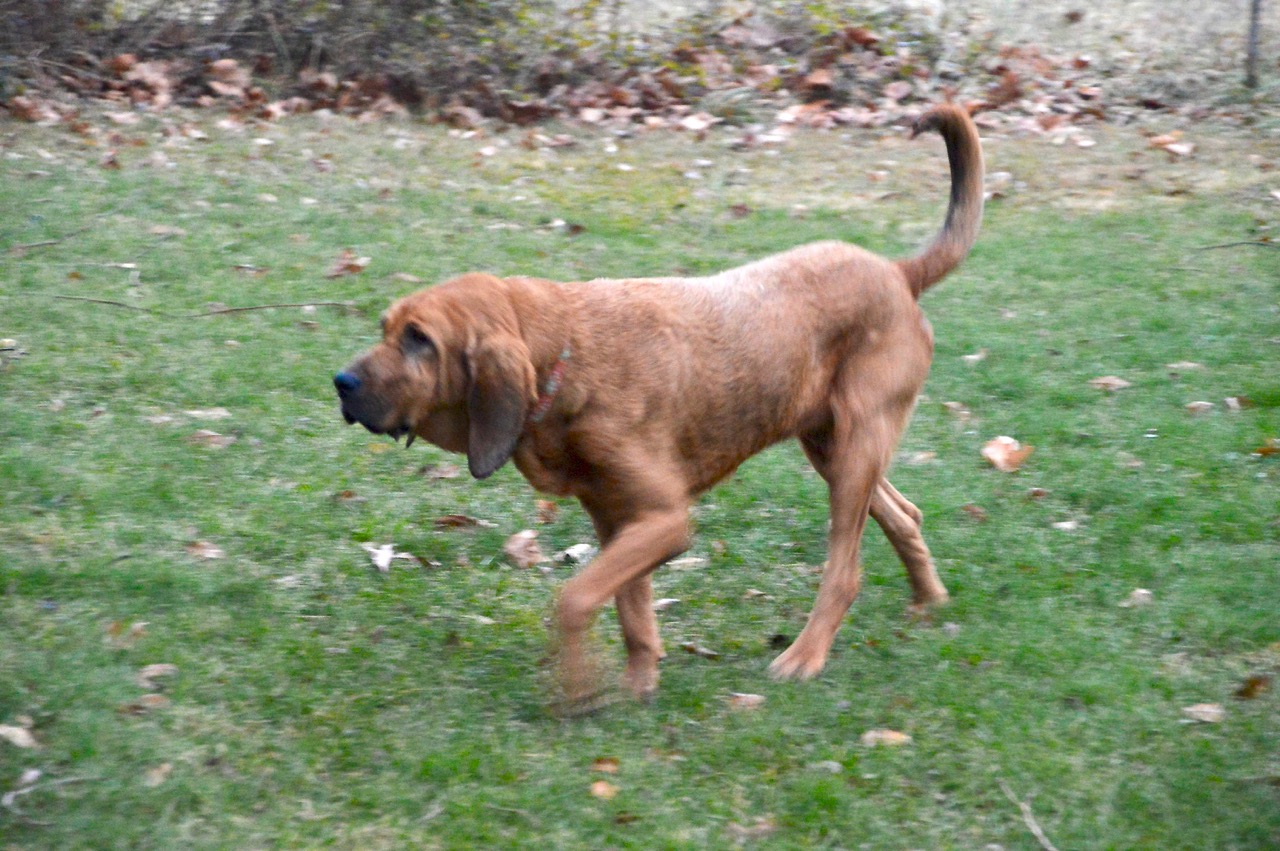 Evidently no cat scent in the yard this morning since both hounds ran for the house once they walked into the yard. Or it could have been that drizzle becoming a little stronger that made them a little more motivated to get back inside.

I read a little about this new law they are passing about Net Neutrality. I won't go into detail but from what I have read, it will take up to a year or longer before it goes into action. It will probably be delayed even longer due to all the appeals held up in court. All of the major internet service providers have come out with statements saying they will NOT be making the changes the media is suggesting as a worse case scenario.

That means they are saying the internet will remain fast and open for all. That they will NOT prevent certain websites from showing up on your computer nor will they charge you more money for faster speeds with plans similar to your tv programming. Yet, in today's climate I find it hard to trust anything that large companies tell us. So, sometime years from now we will find out if they are telling us the truth. I will never pay on a tier system for faster internet speeds.

It always surprises me when the counter in my camera flips to 0001 to start another 10,000 photos.

Not much planned today in 'the tropics' of Southern Indiana.
at December 18, 2017