It's Too Cold For Stella - She Turns Around 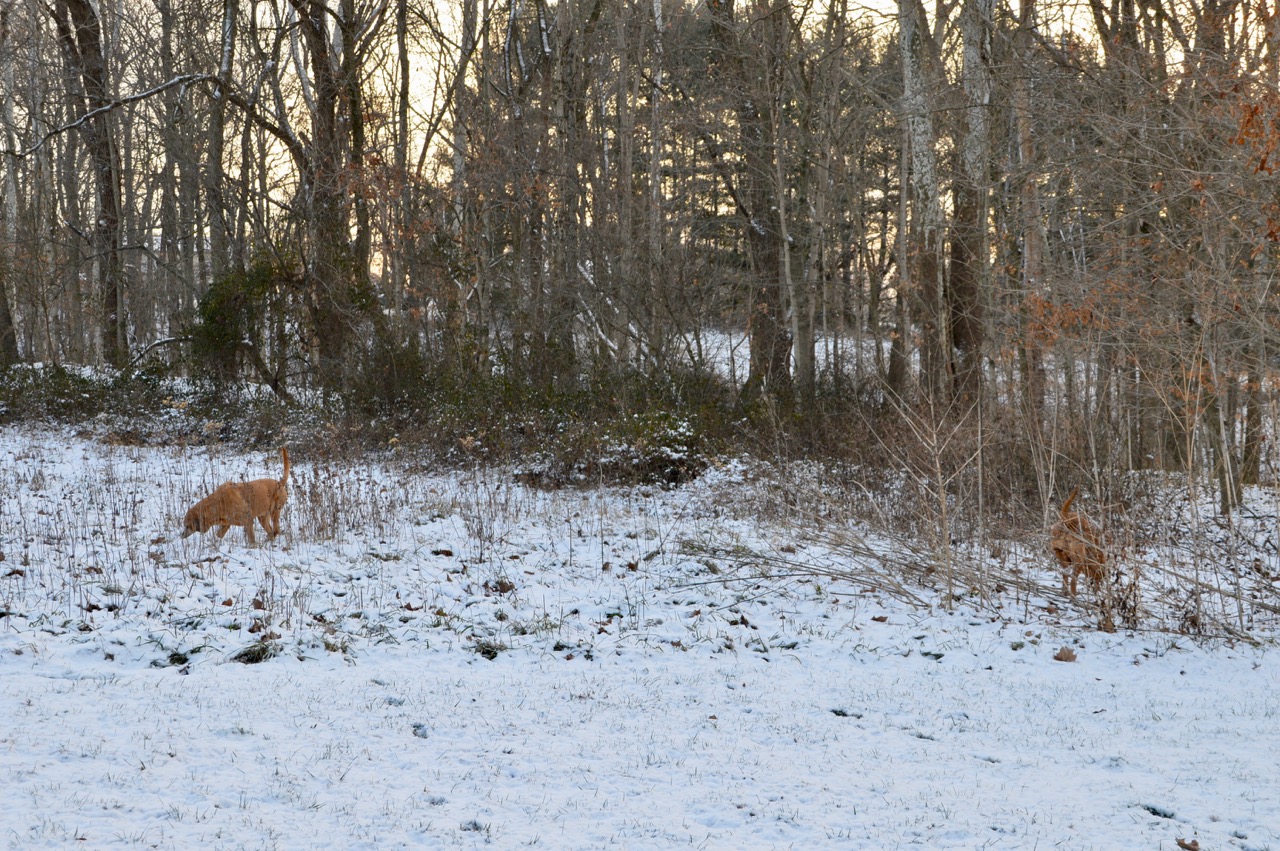 Yes, it was cold, freezing cold but nothing we had not walked in before. Two of three weather apps were telling us it was 19° and a wind chill of 12-15°. Only Weatherbug was saying it was colder with a wind chill of 5°. The bloodhounds are built for cold weather, Heidi is not. So while she was buried in her Marmot sleeping bag, the bloodhounds and I took off for a walk on the 'frozen tundra'. 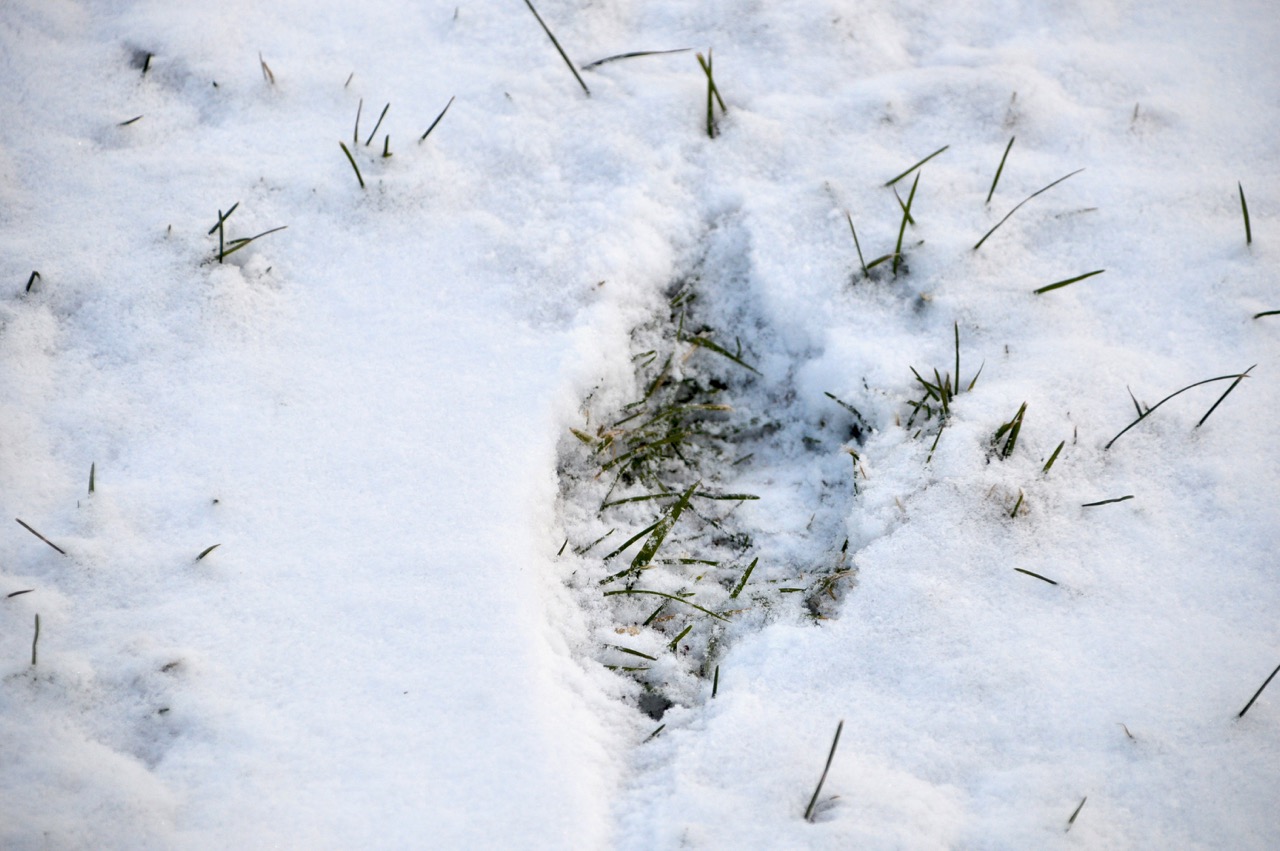 It didn't look like it snowed much more than we had yesterday afternoon and barely reached the 1" mark to make it an "Official" White Christmas. I knew with the freezing temps I'd have to keep an eye out on the hounds to see if they showed me any signs of being too cold. Talking to different vets over the years and some reading online, the hounds will show me what is too cold for them. They are built for weather like this. 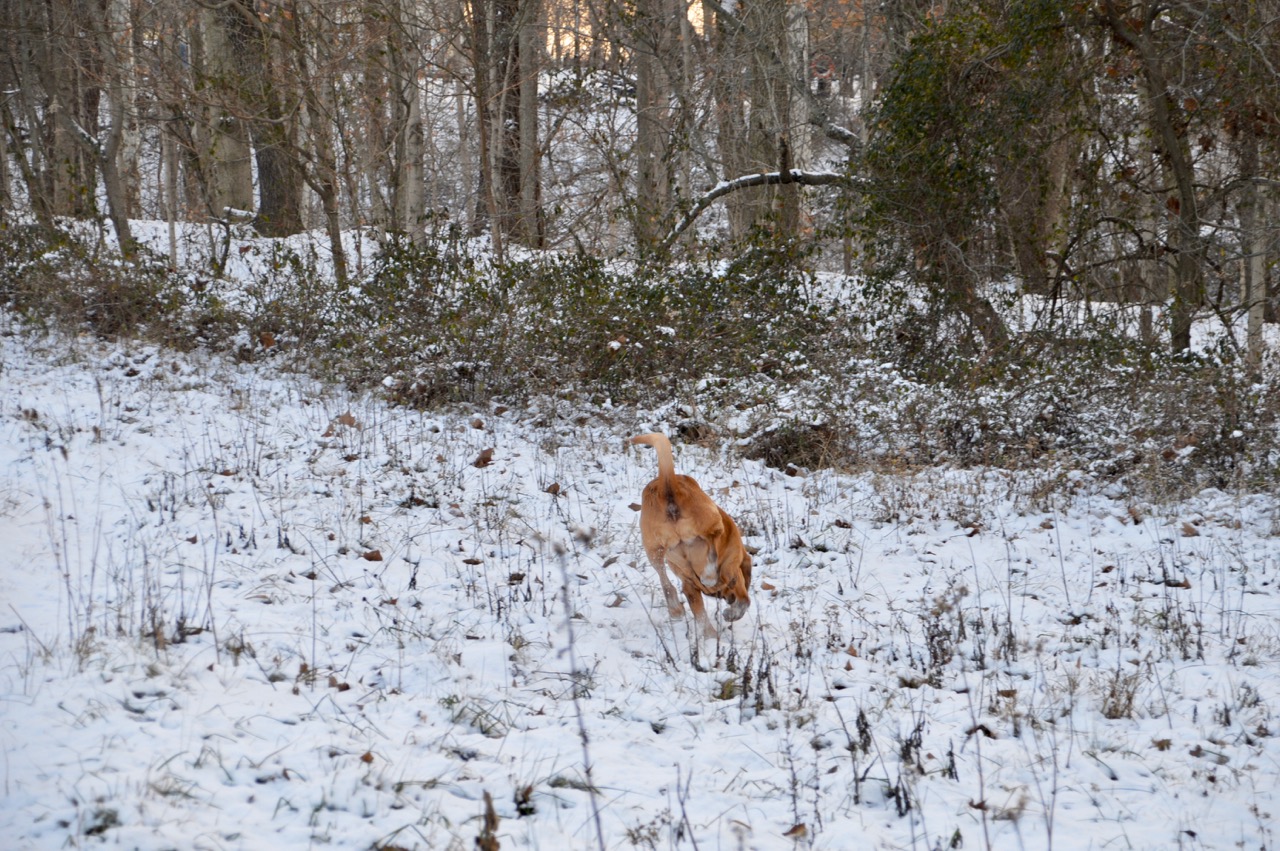 With their coats and extra heavy paws, sweaters and booties are not needed. Bloodhounds are bred to track deer or in search and rescue they will hunt people in weather just like this. I knew the first sign of either hound lifting their paw off the ground and standing still would mean we would turn around and head back to the house. 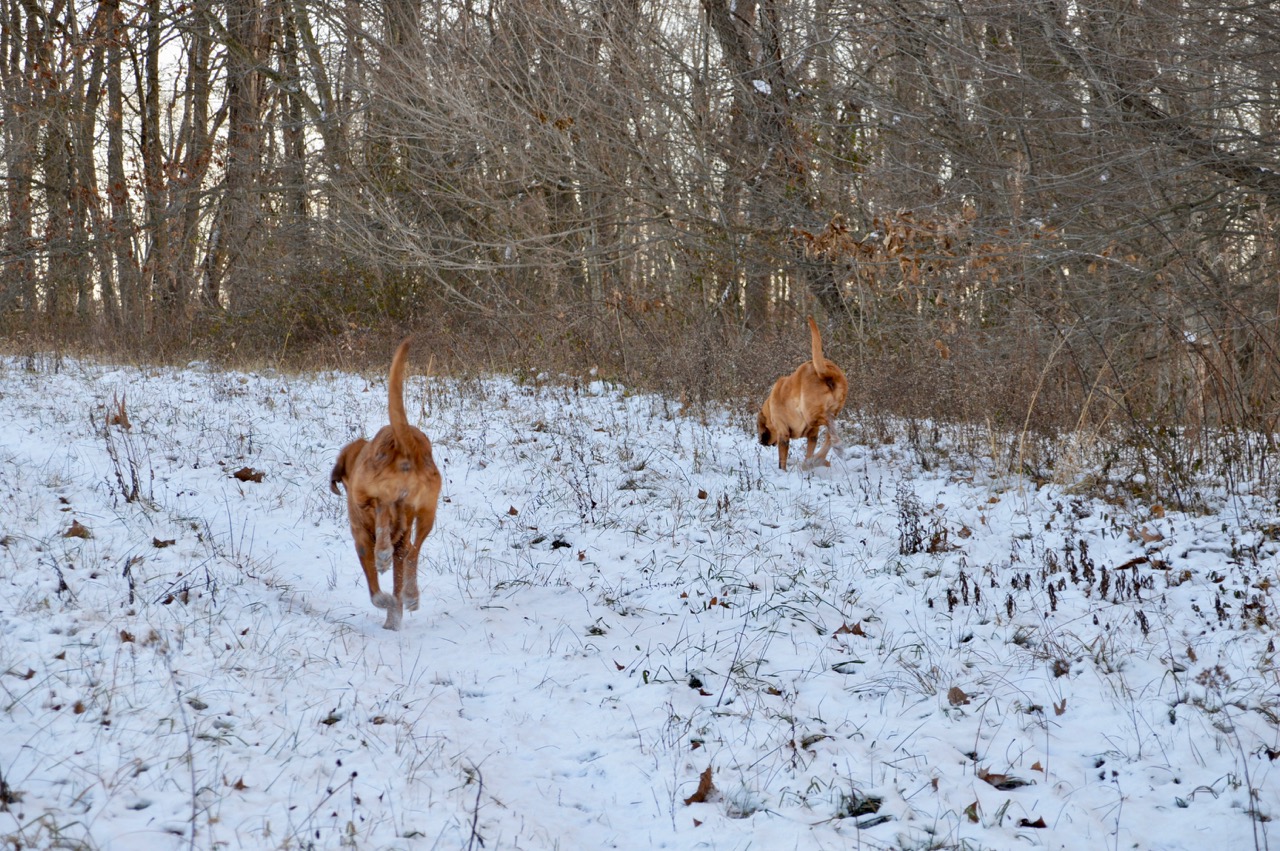 With both hounds running fast enough to be caught on camera with 3 of their paws in the air at the same time, I could tell they were having fun on their morning walk. We let the sunshine set up a little before we went outside. My North Face snow boots were working as they were designed to do. I was warm inside my extreme winter gear. 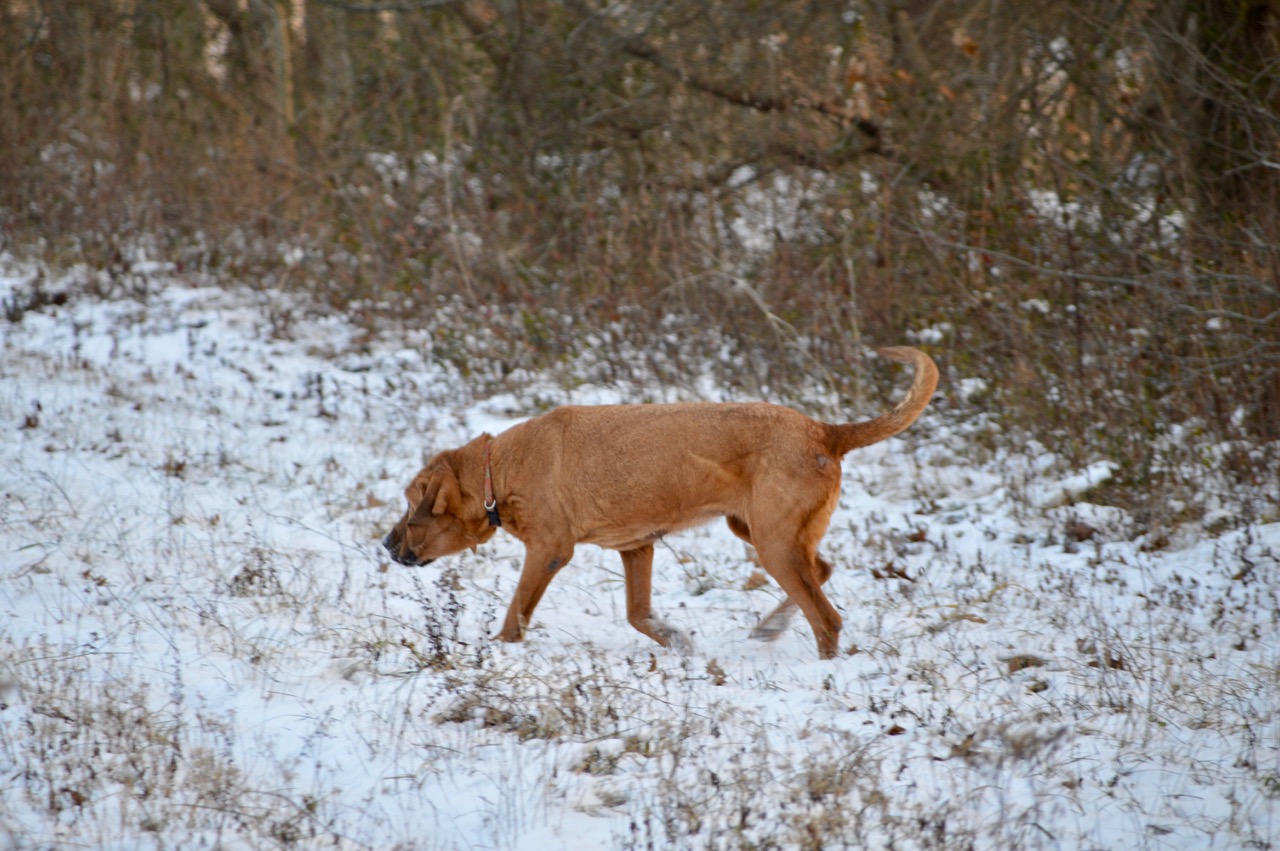 With no wind, that made it more tolerable. Sadie was beside herself with excitement and Stella was barely able to keep up with her as she trotted through the snowy field. 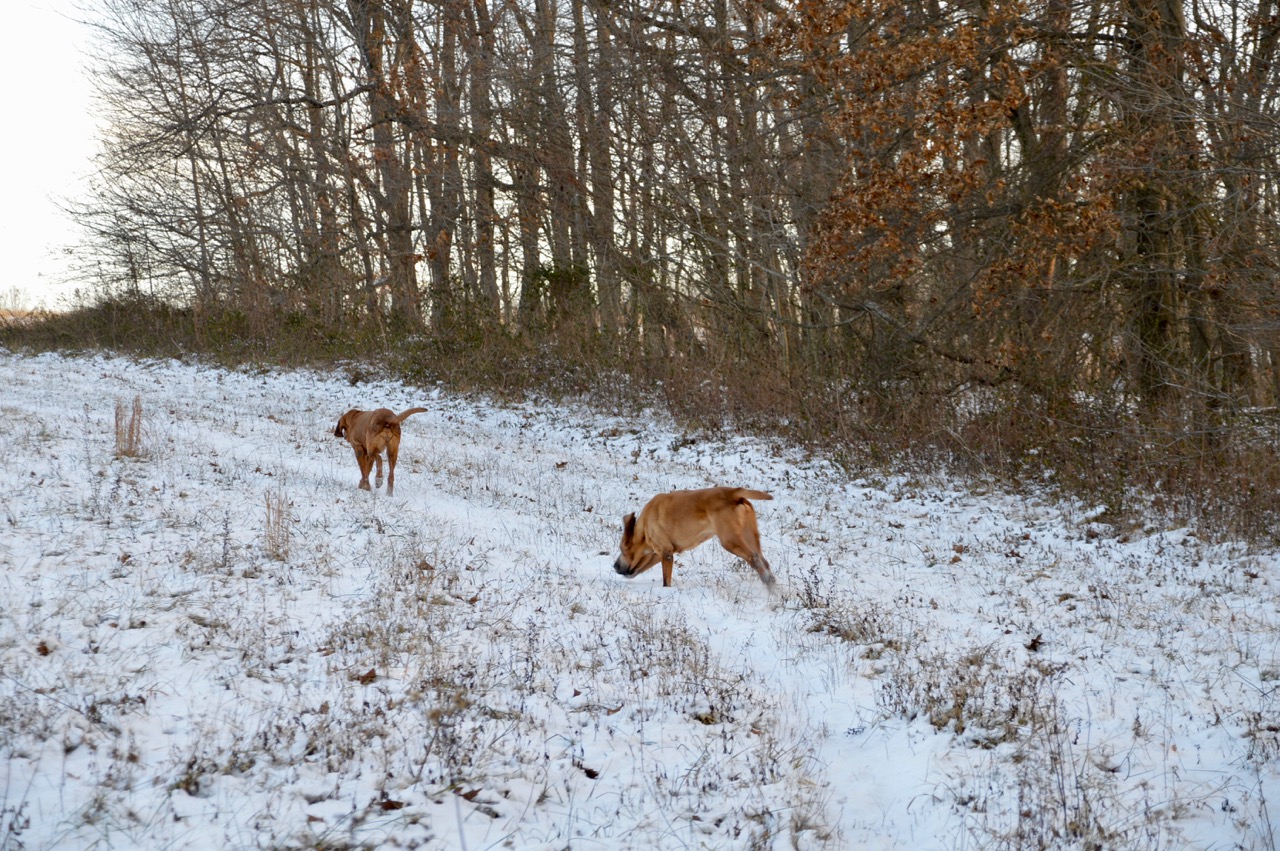 Here Sadie took off in a sprint after something, leading her to the middle of the field. 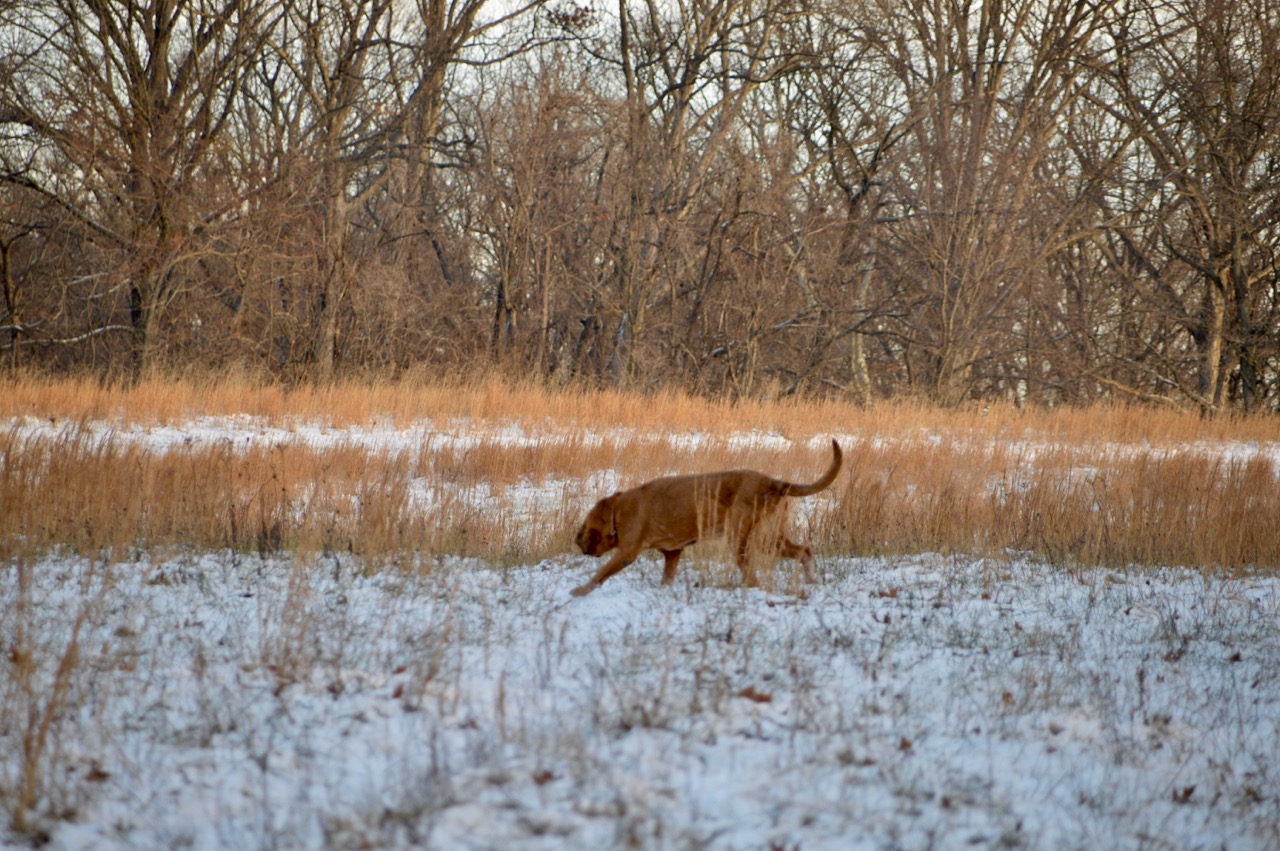 Stella was hot on the trail and no signs of having any kind of trouble with the cold weather and frozen snow ... until .... 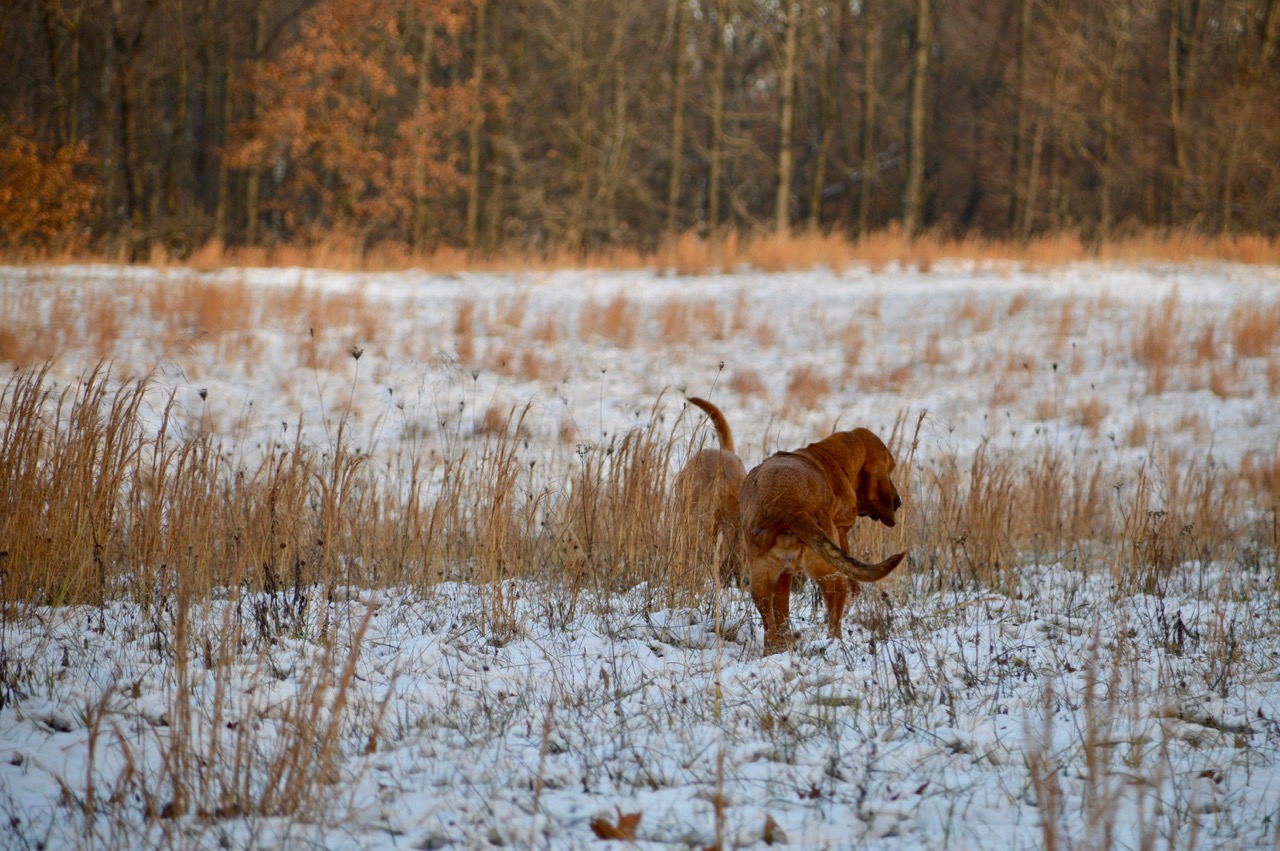 She stopped all the sudden in the middle of her run. Trying to lift her rear paw I knew she was cold. Sadie was still hopping around different spots checking out everything her nose was finding. 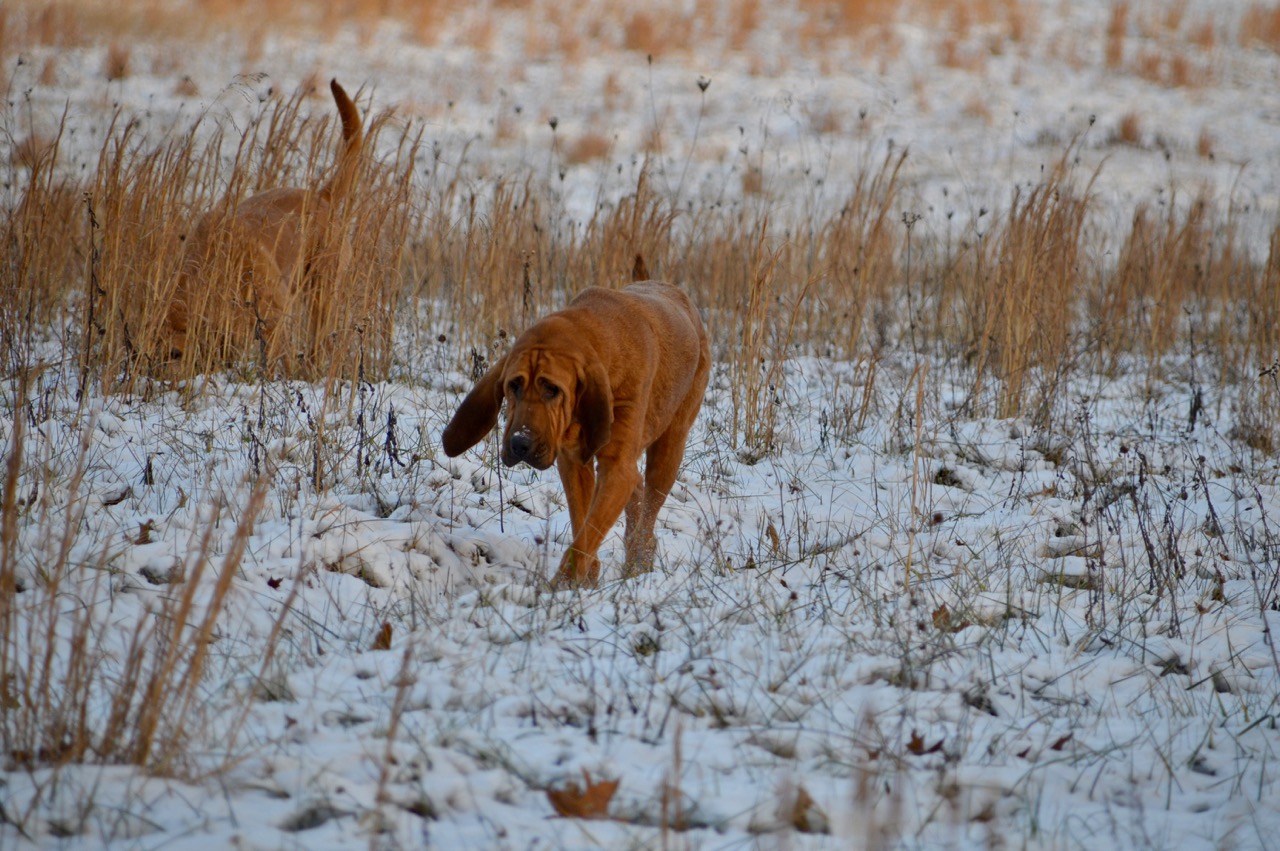 Before I could say a word to Stella, she turned around and headed home. She was walking slowly with all 4 paws on the ground and never veered off the path. She had one thing on her mind and that was to get back to the house and inside where it was warm. Remember that Stella NEVER follows the path on our walks. 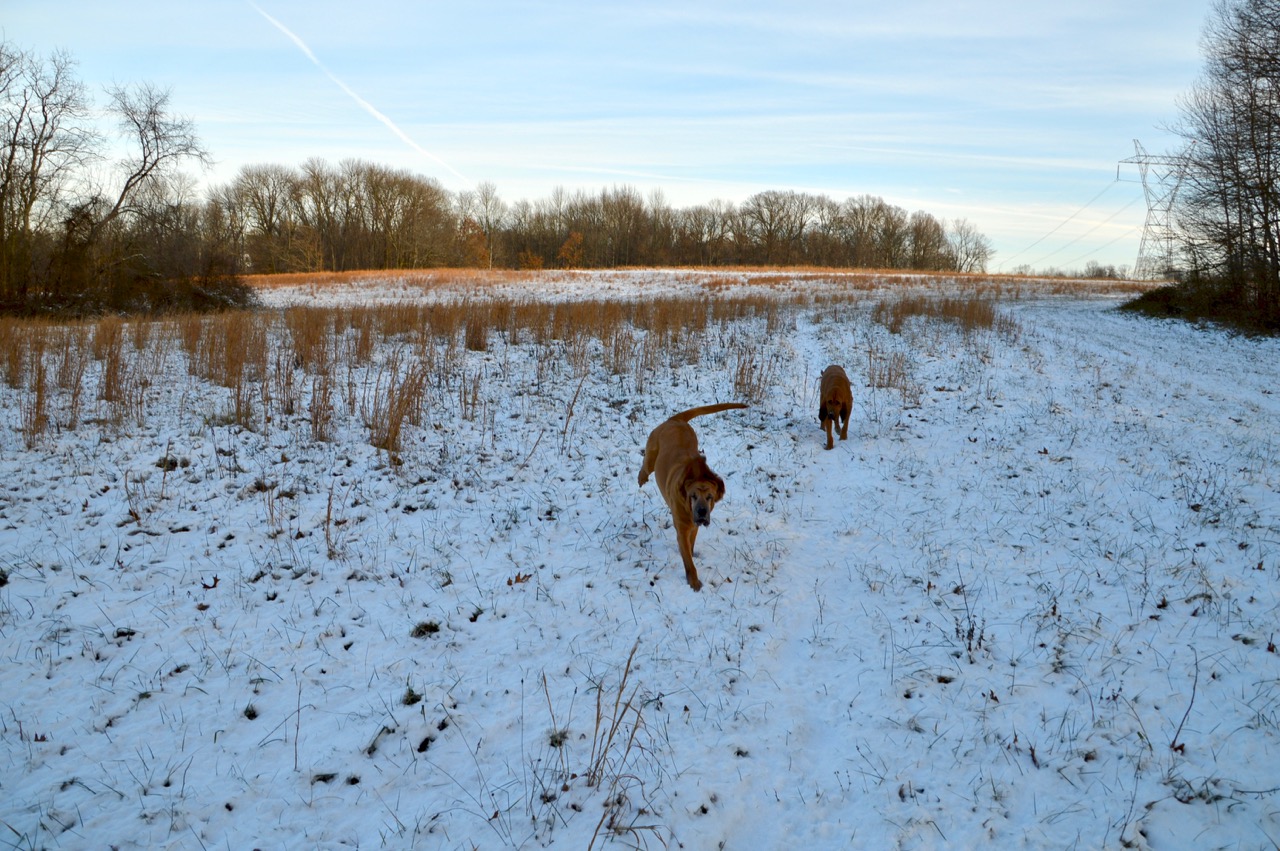 I yelled for Sadie to "come on, we're going home", while Stella maintained her slow pace. 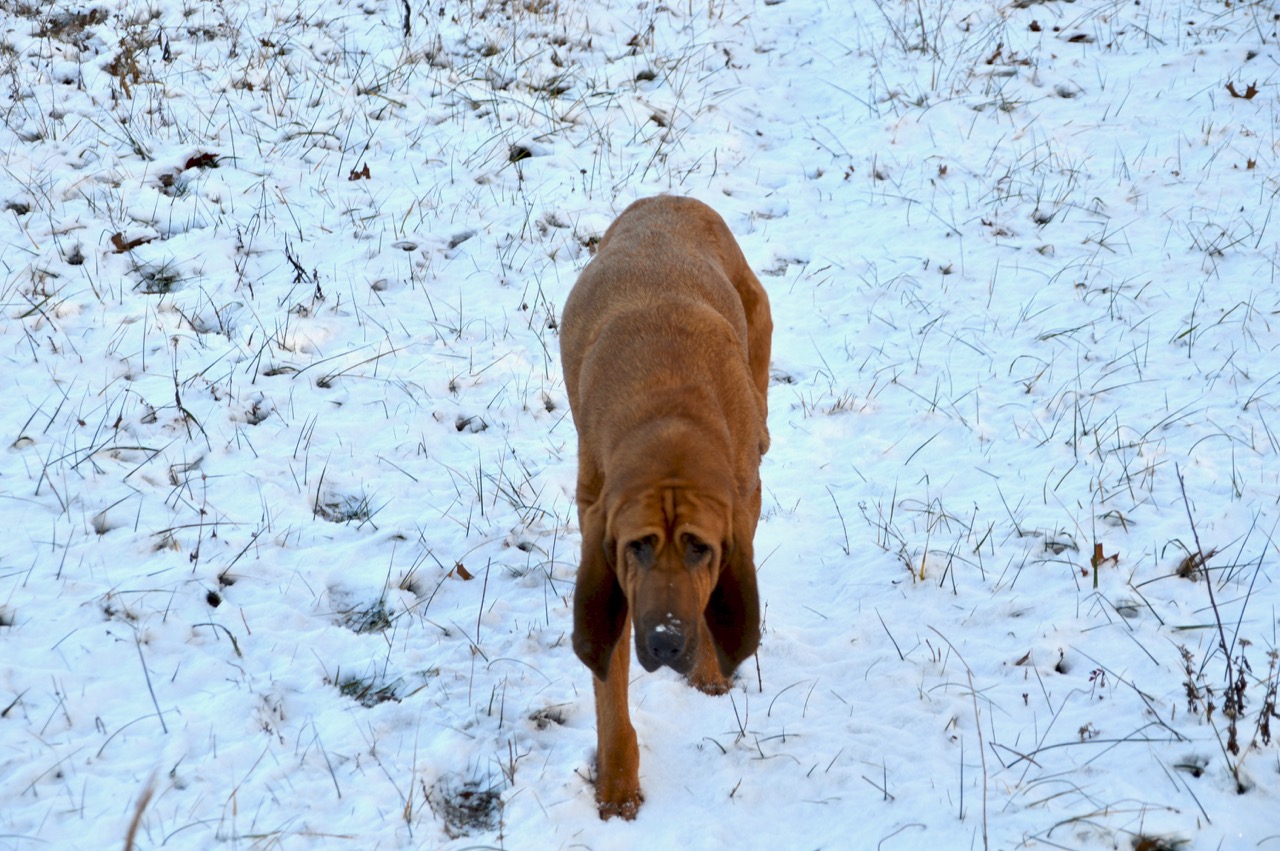 Stella was in no mood to search for deer scat, run after deer, sprint in the field or anything else ... she just wanted to get home. 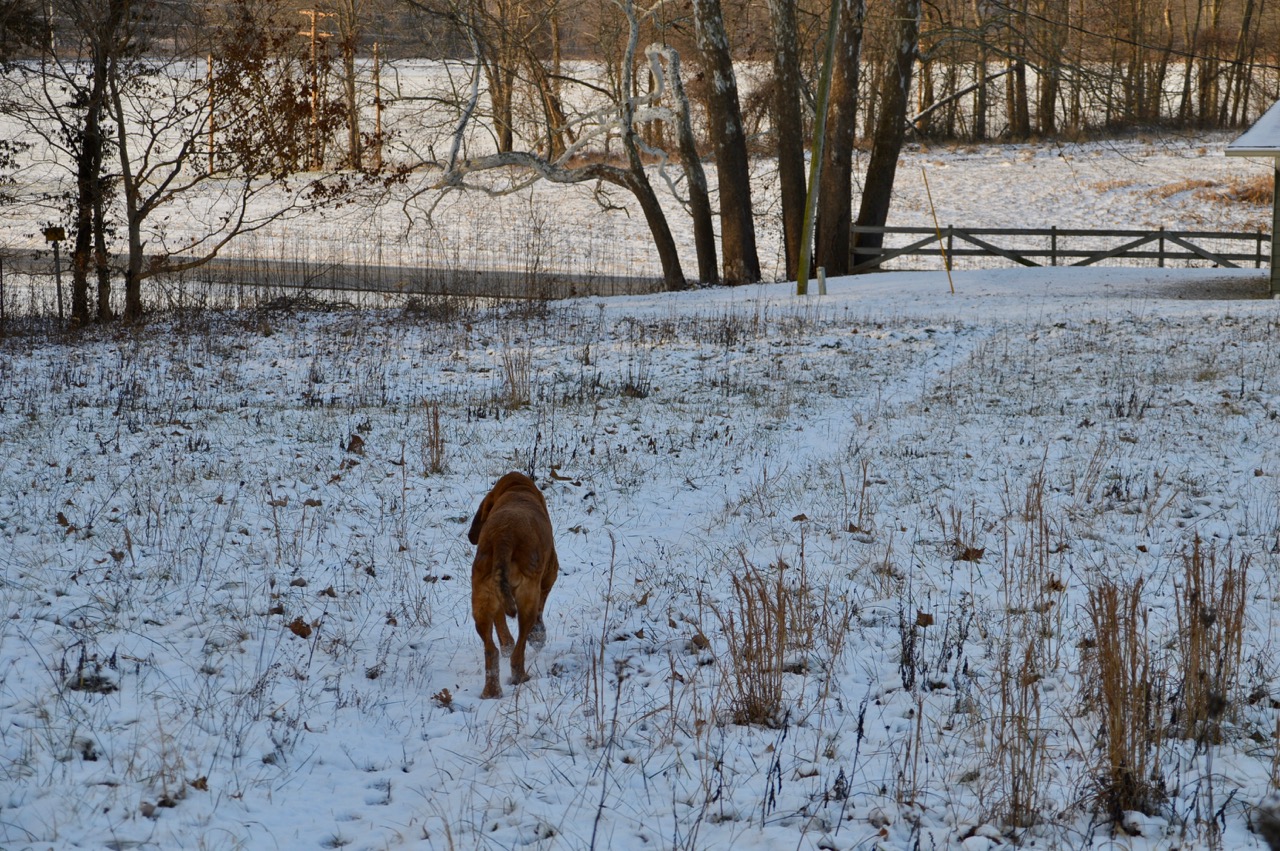 It was so different to see her following our path without veering off into the field. She wasn't limping as she walked. If I would have seen any kind of limping I would have fit the camera into my large parka pocket and carried her back home. 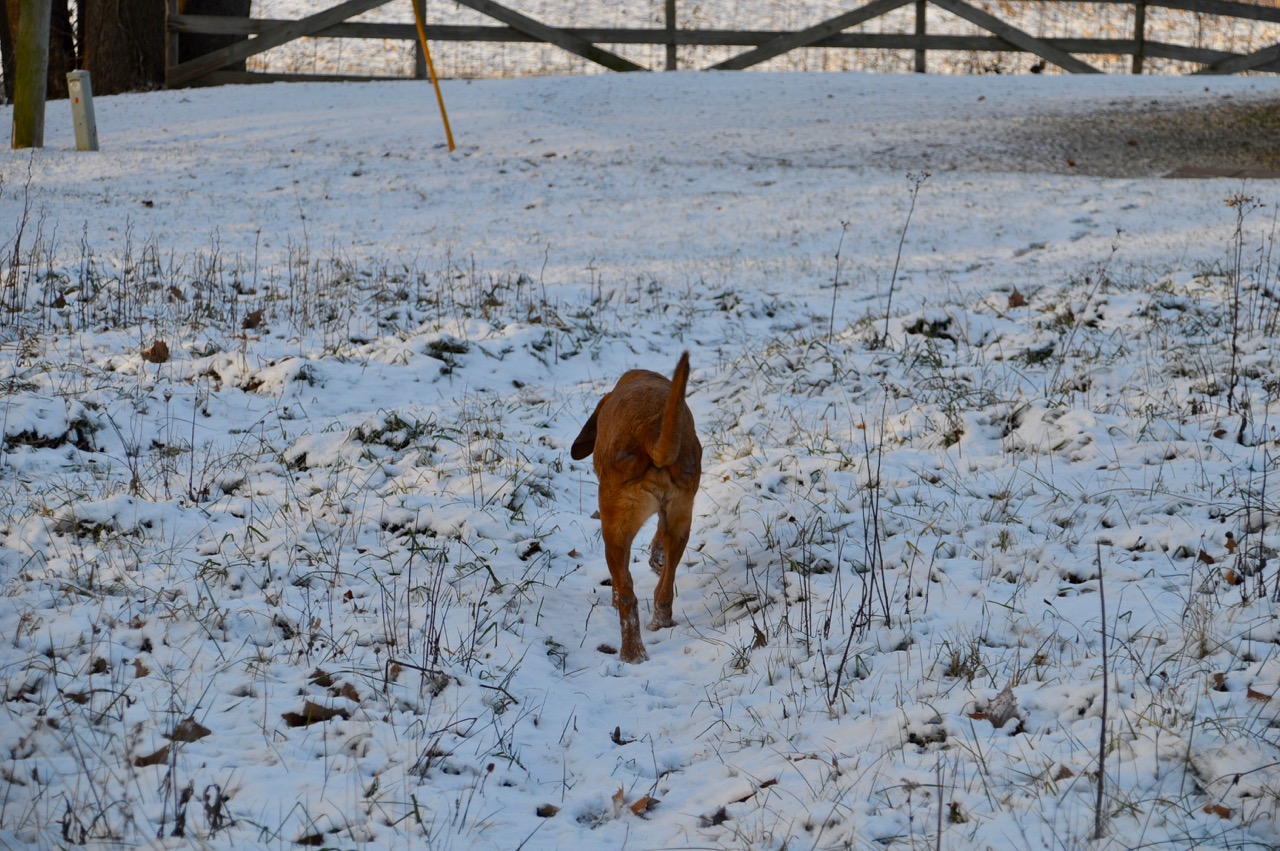 She wasn't waiting for Sadie nor I, she walked non-stop, slowly toward the house. 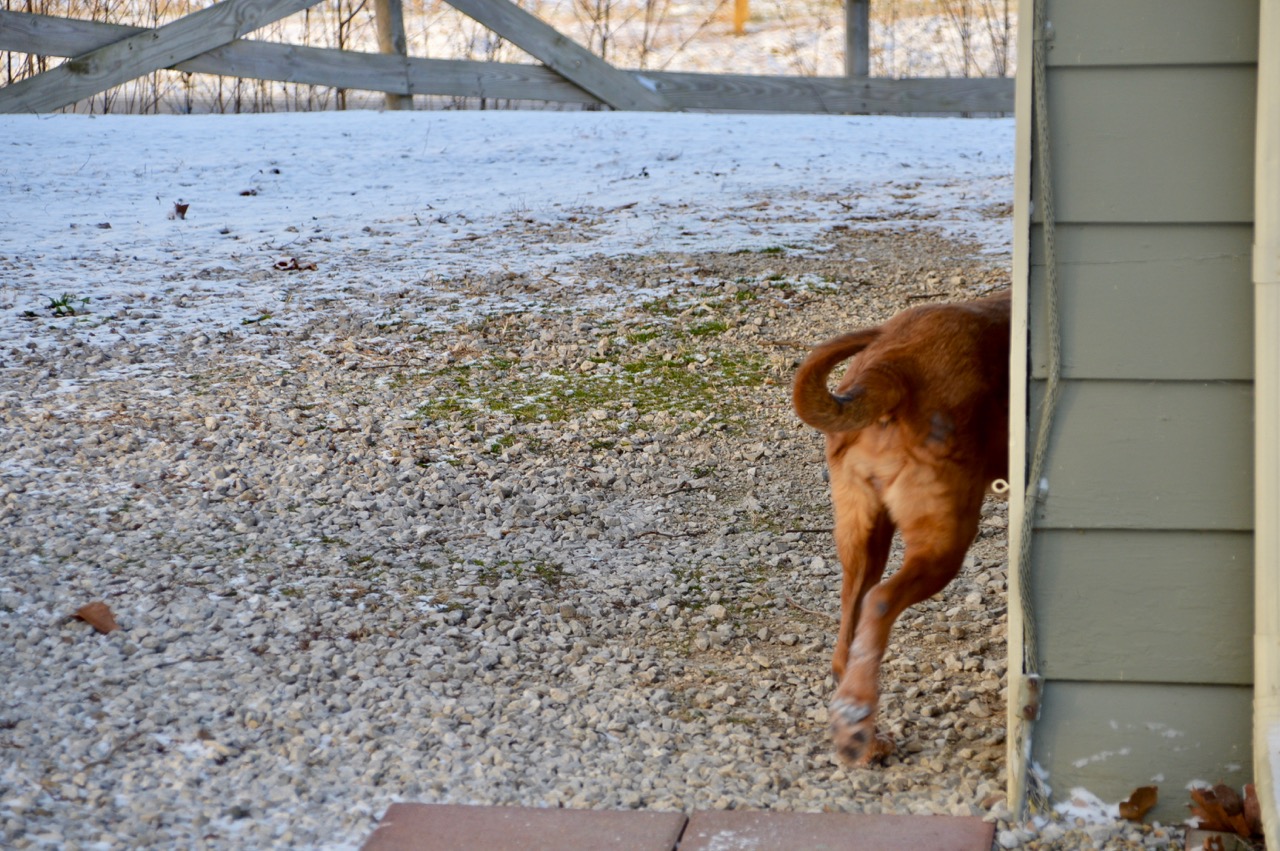 Once her paws hit the red tiles she broke into a trot and headed for the door. Her paws were no longer on the snow. 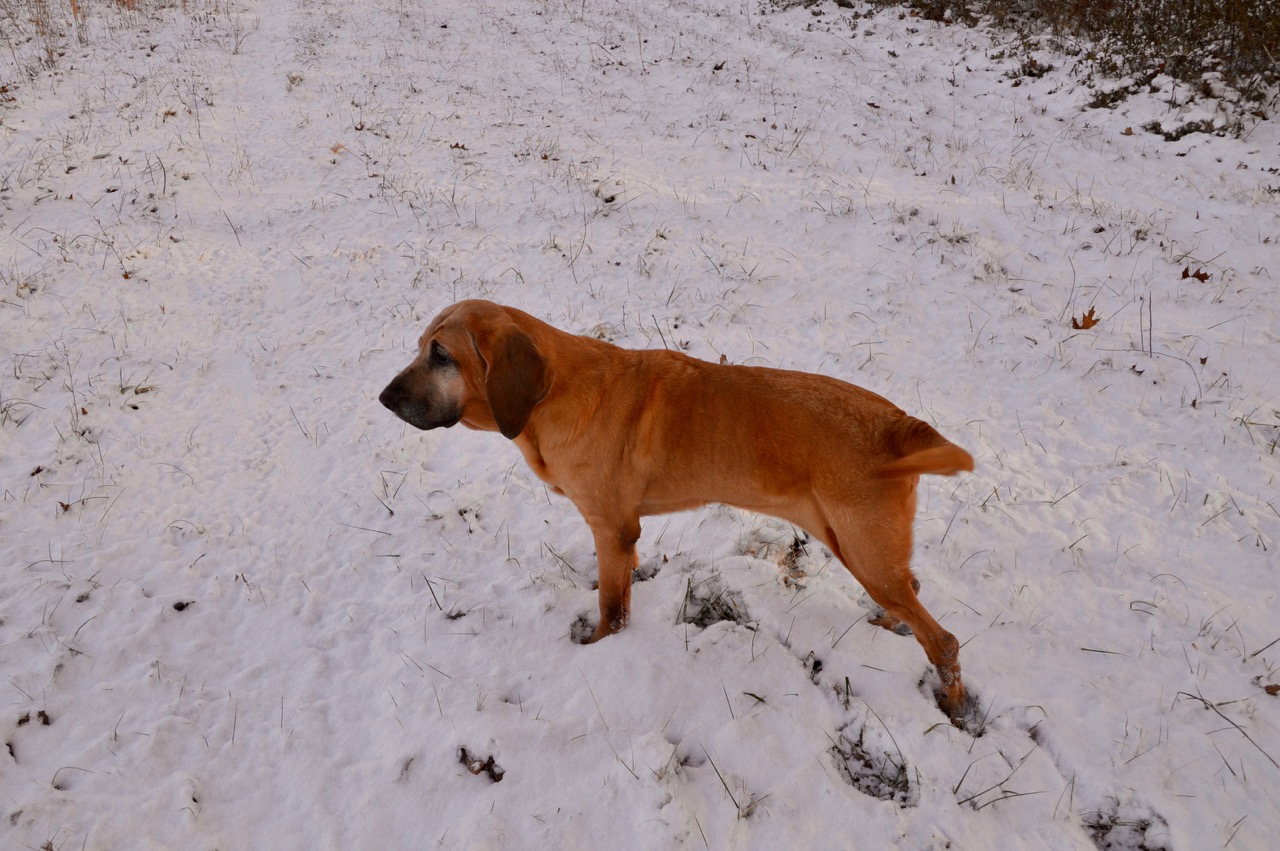 But Sadie wasn't finished. It doesn't take too long before she gets cabin fever if she doesn't get at least two walks in a day. That means she will sit and stare at me for as long as it takes before I get up and take her outside. So after letting Stella back inside, Sadie and I turned around to start the walk all over. 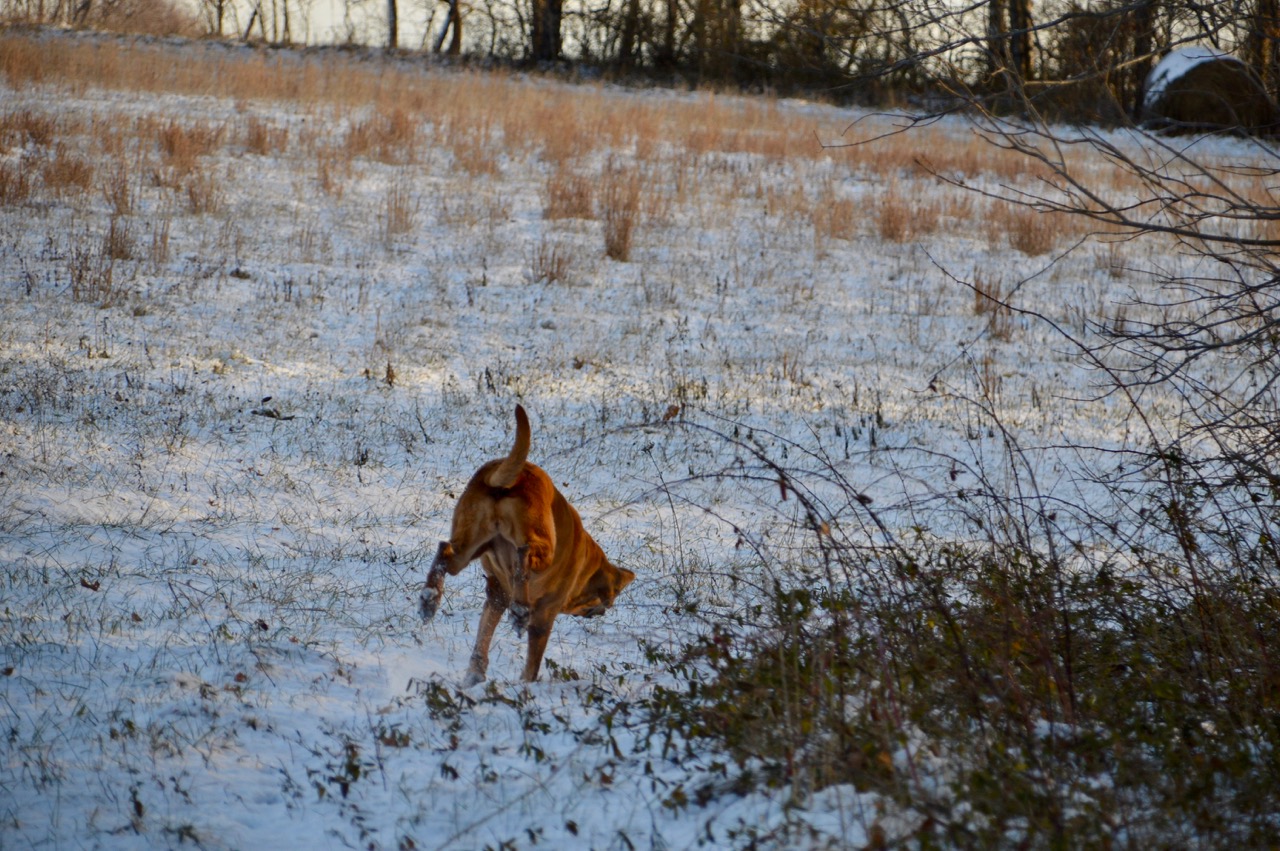 A vet told me once that as long as the hounds were running around in the snow or having fun like they normally do, then they are warm enough to be outside. Sadie was more than happy to be outside this morning, no matter what the temperature was. 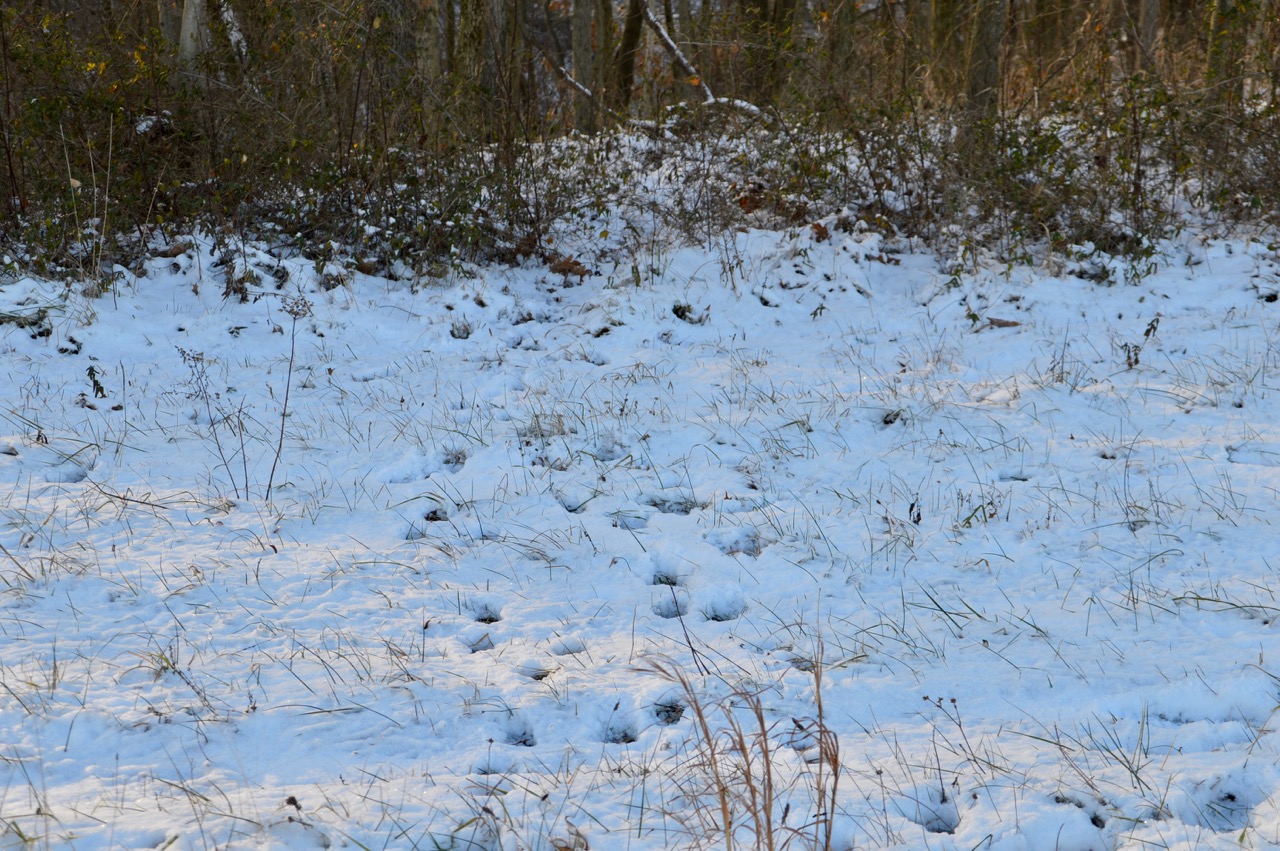 She ran right past the deer tracks that came from the field into the woods. That is the same spot where Stella spends a lot of time just a few feet in the brush. 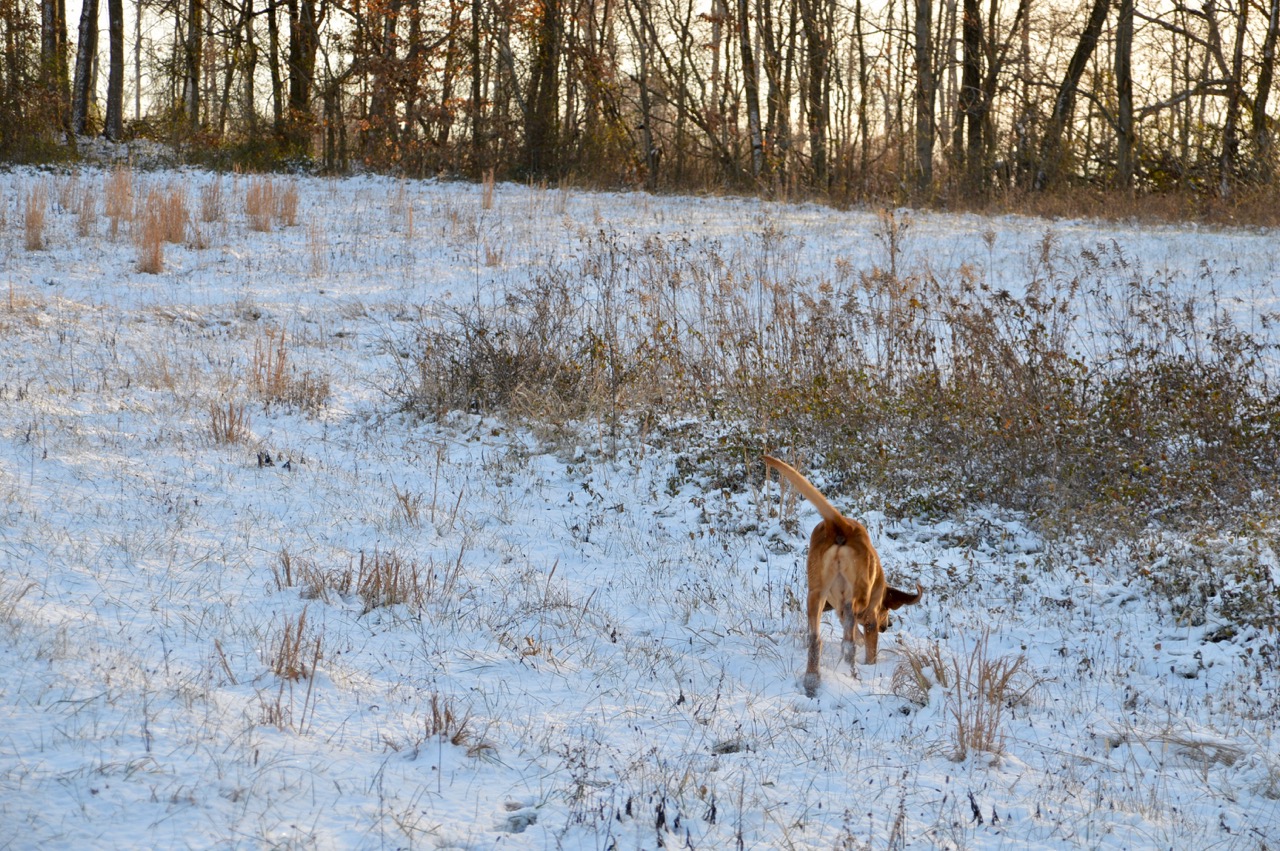 Other than those deer tracks leading into the woods, I saw no signs of any kind of animal tracks anywhere else in the field. Nor did I see any signs that Sadie was getting cold. That would have been a long way to carry a 100# hound back to the house. Over the 9 winters we have walked in this kind of weather, even in deeper snow and single digit temps ... Sadie has never gotten cold. 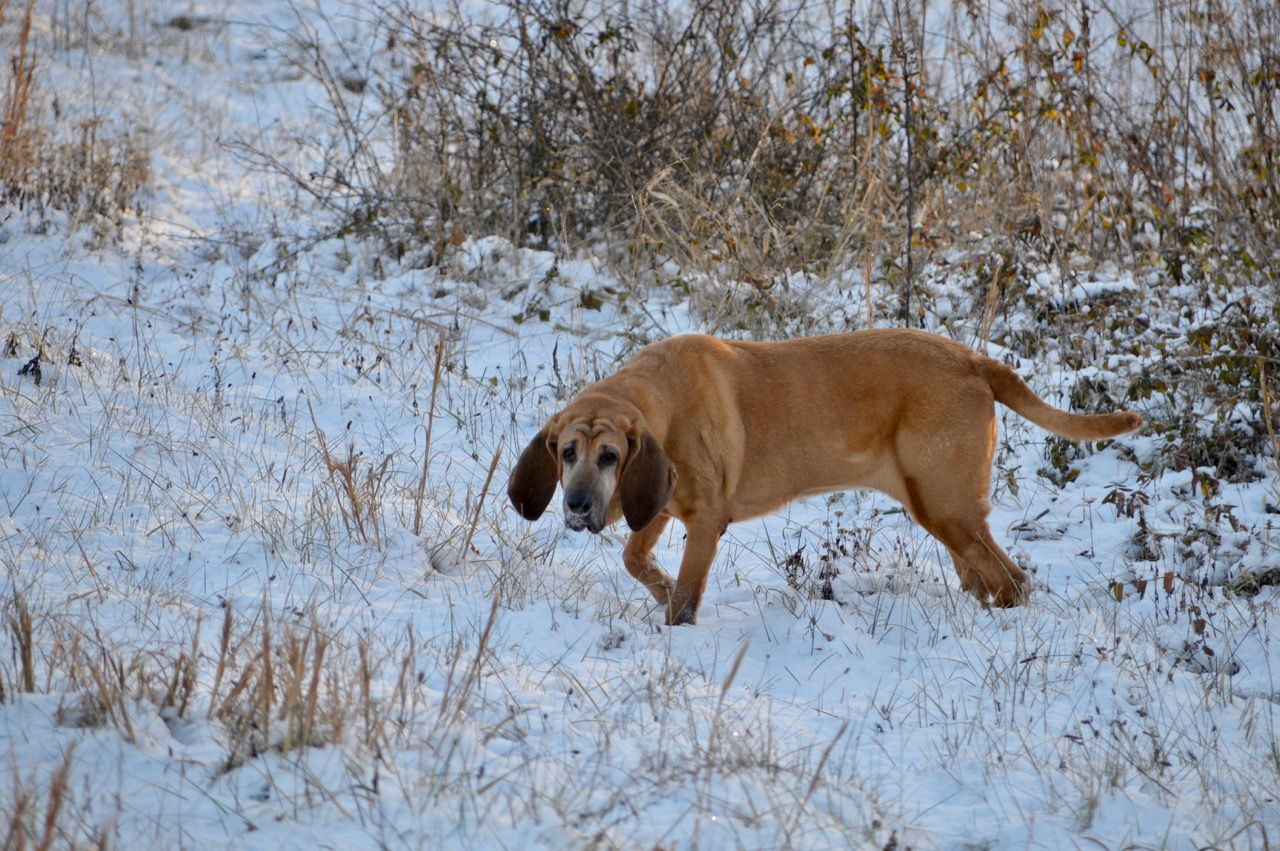 She may have buried her nose in a few spots but eating stuff was not on the agenda today. She moved from spot to spot as fast as she could. There were a lot of scents to identify today. 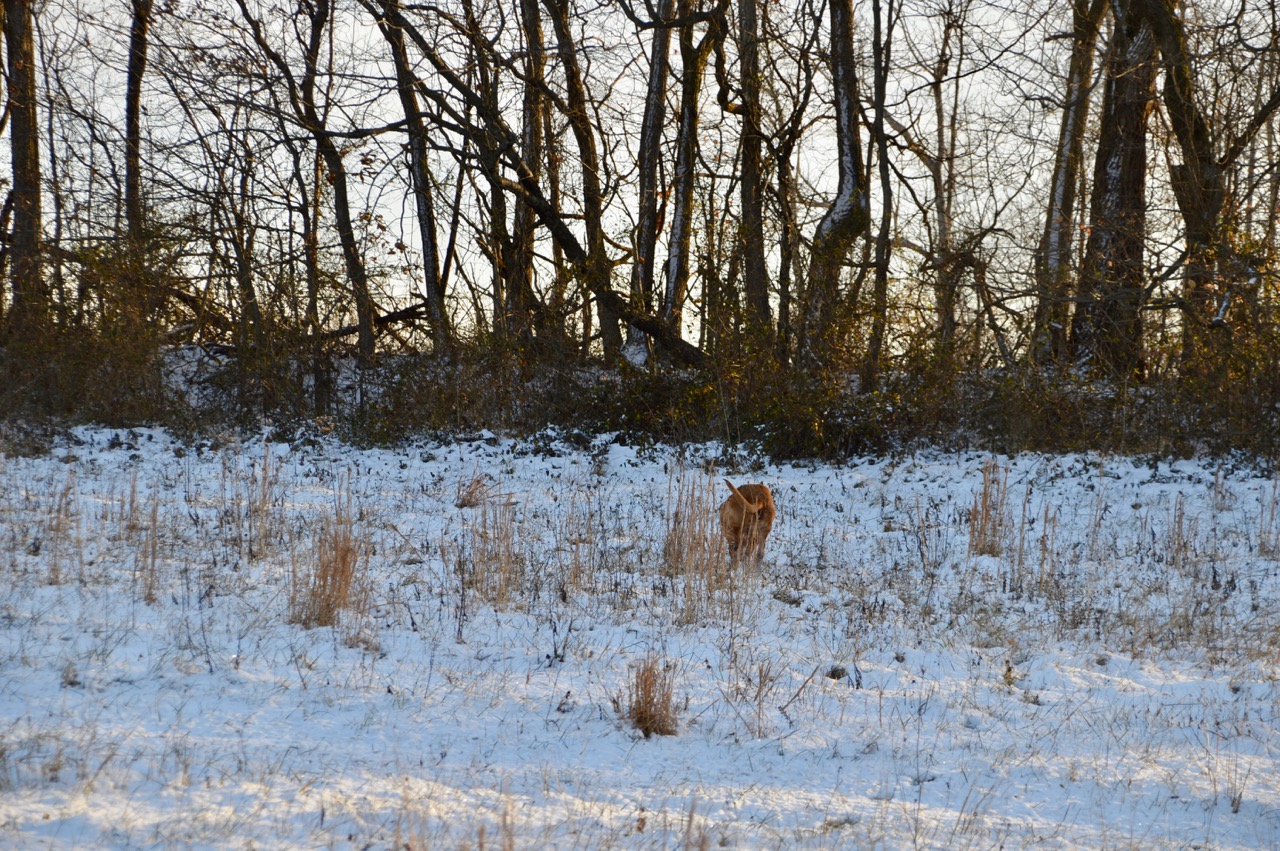 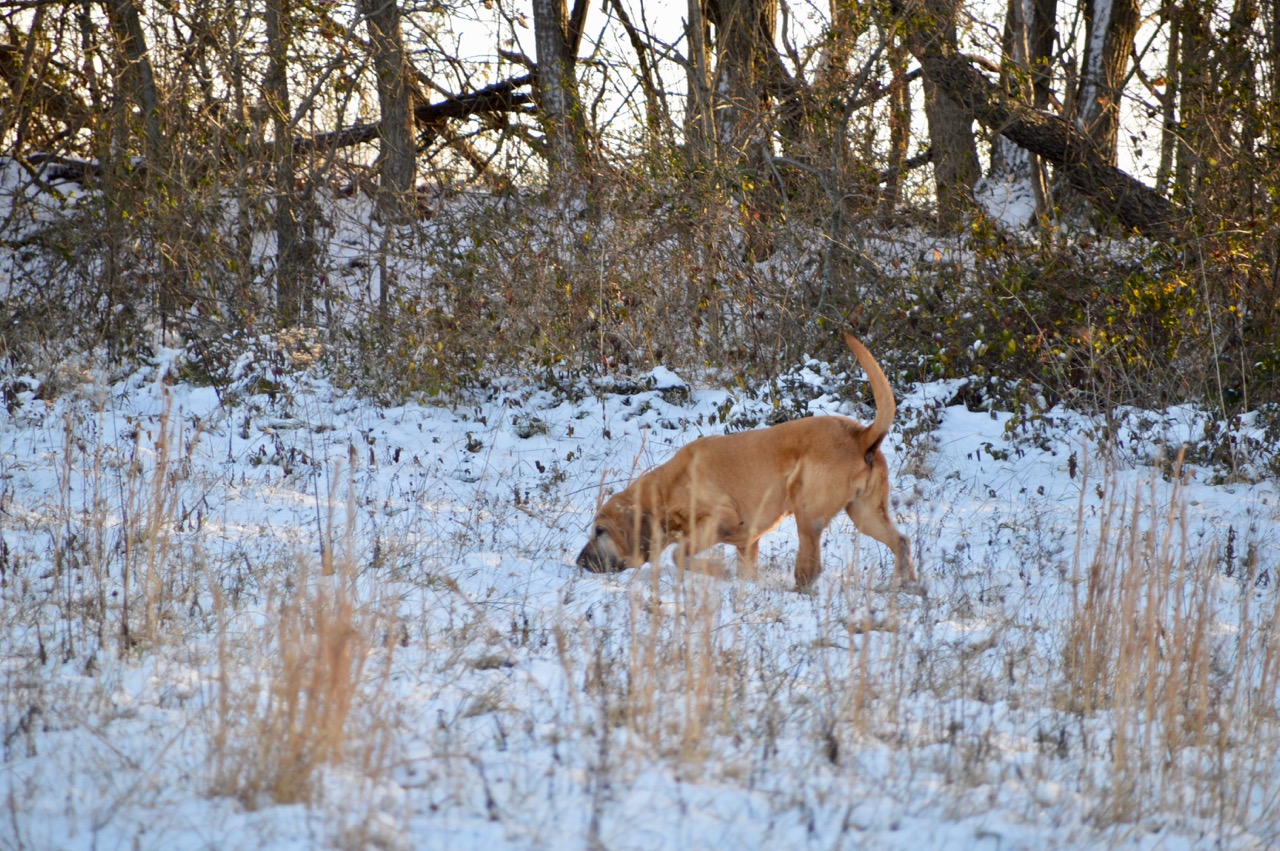 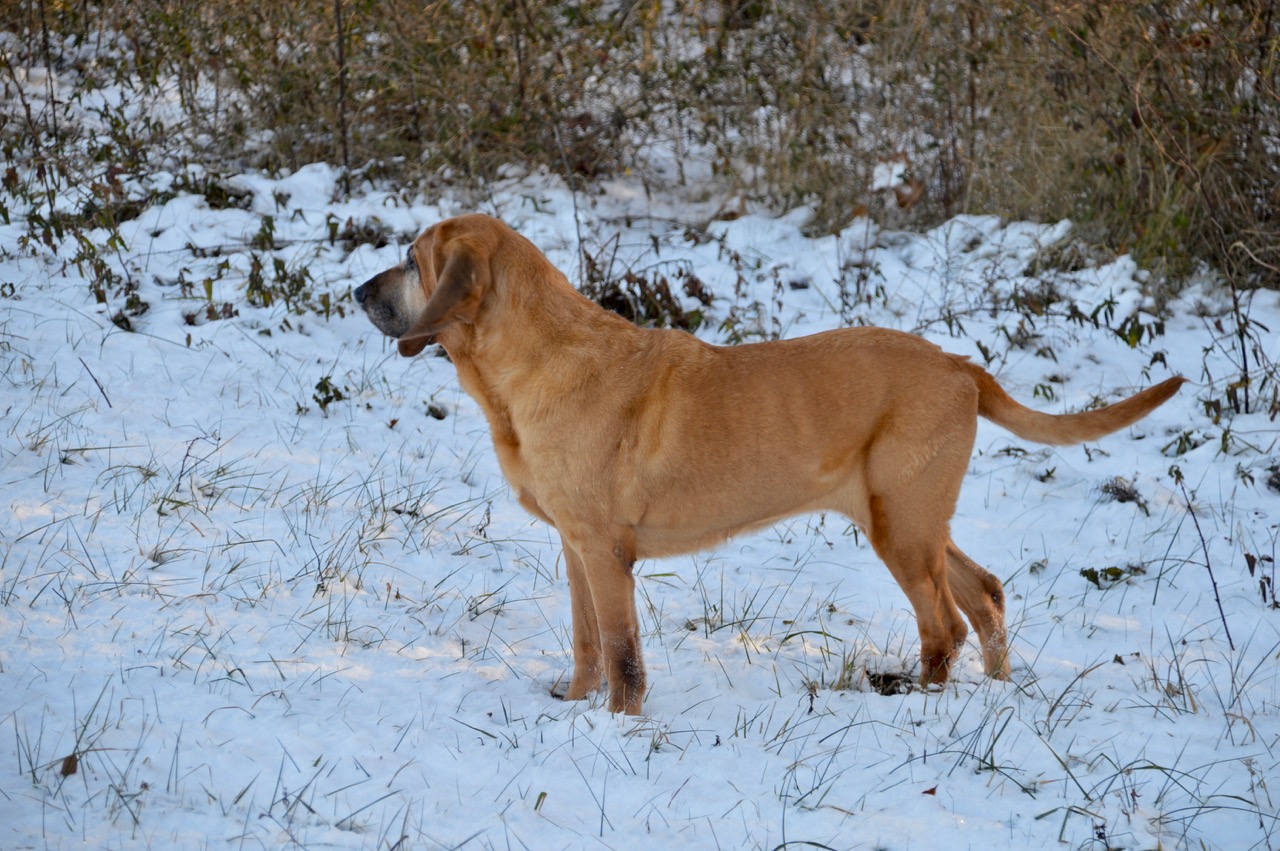 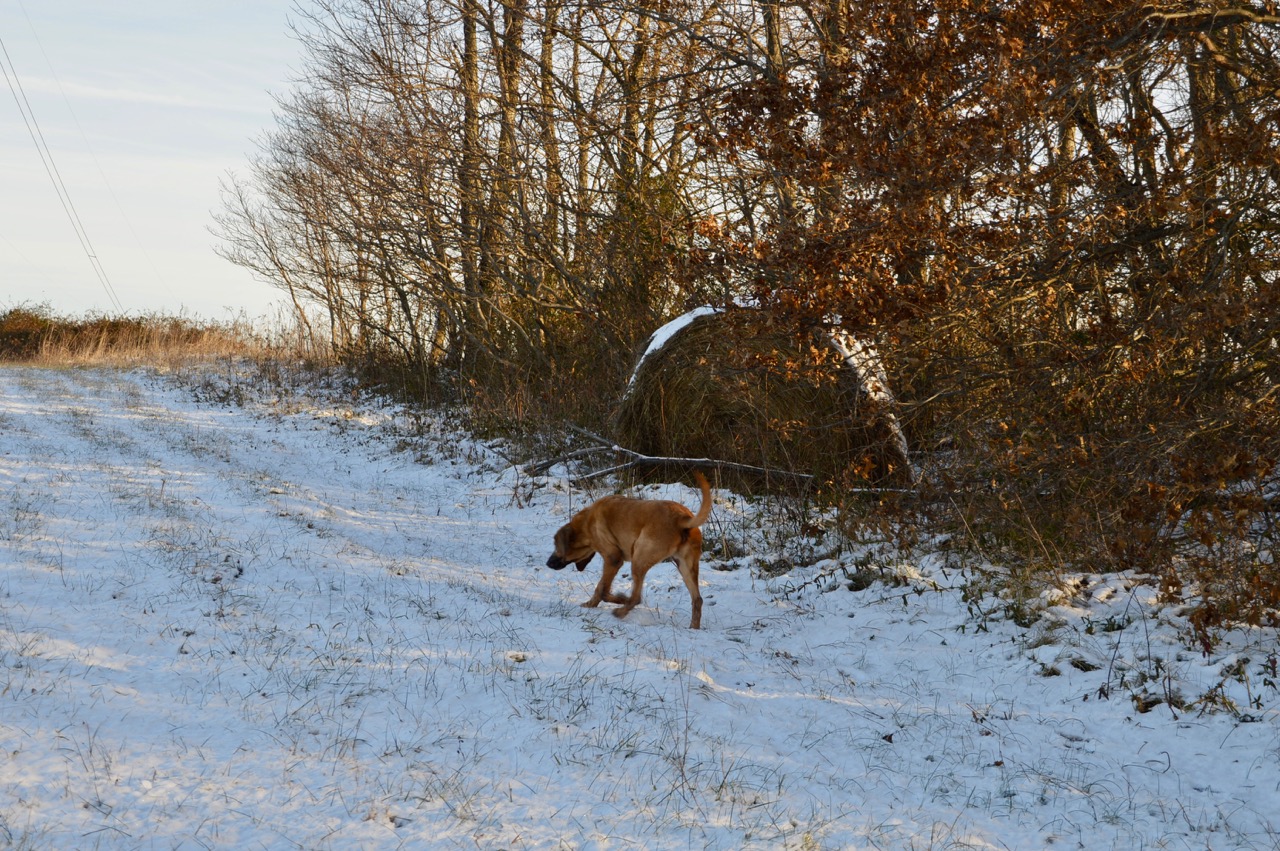 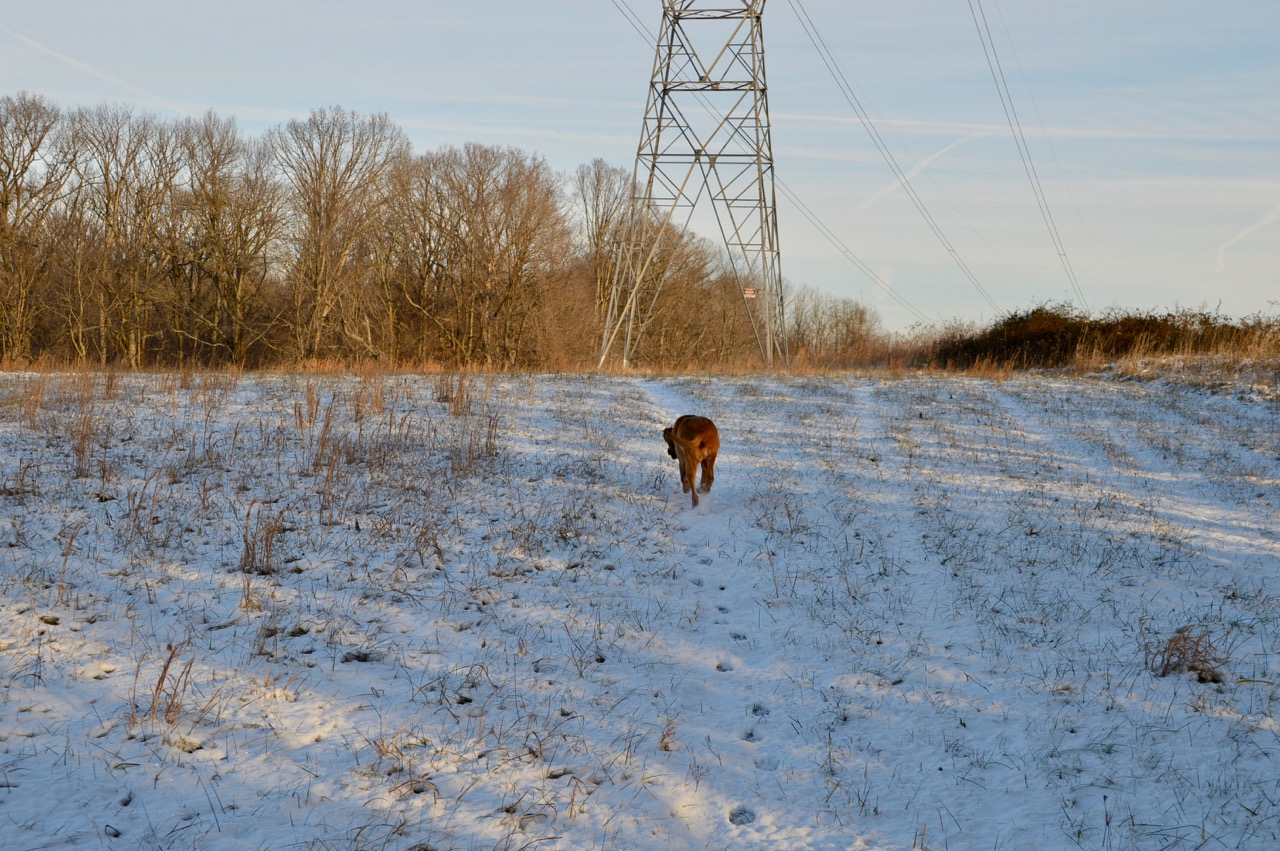 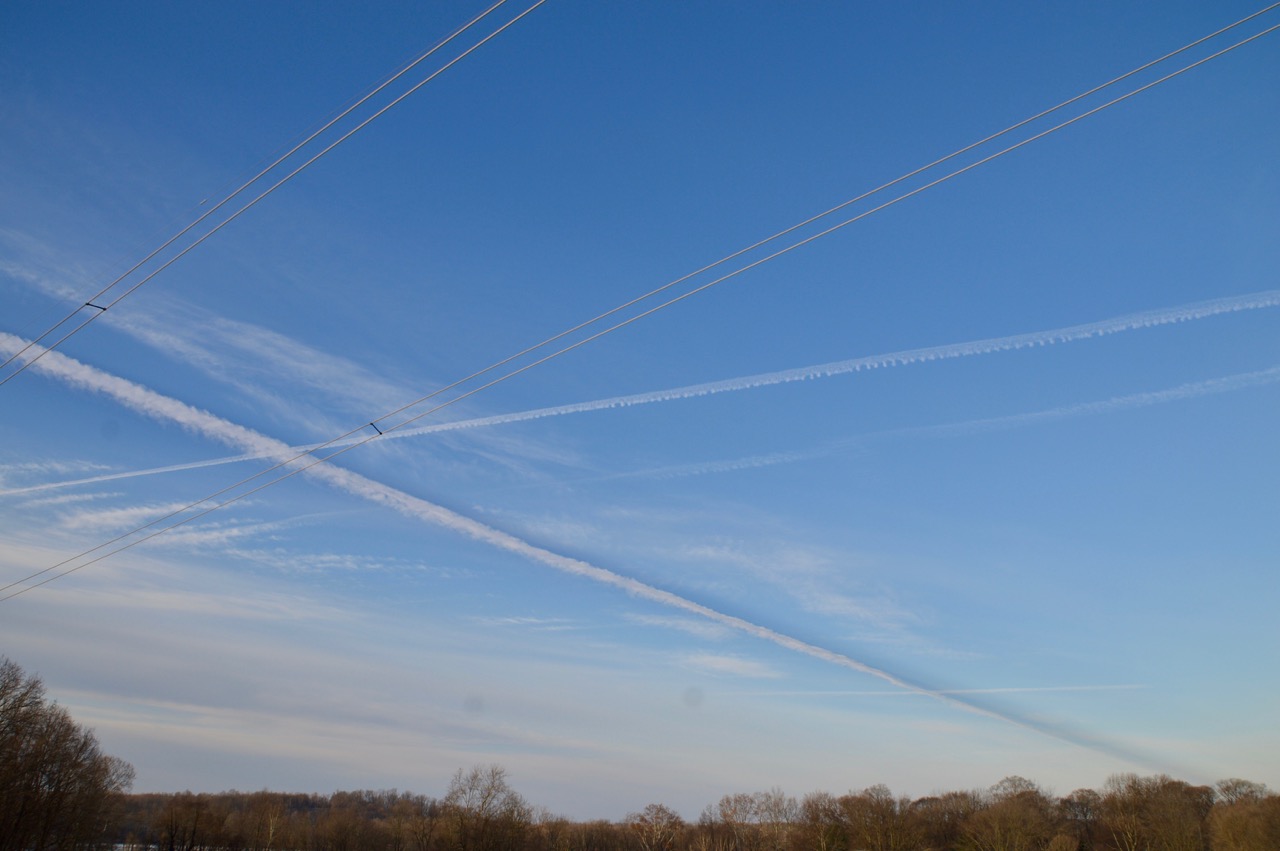 It was a day of aircraft contrails ... I wonder what kind of planes made those? 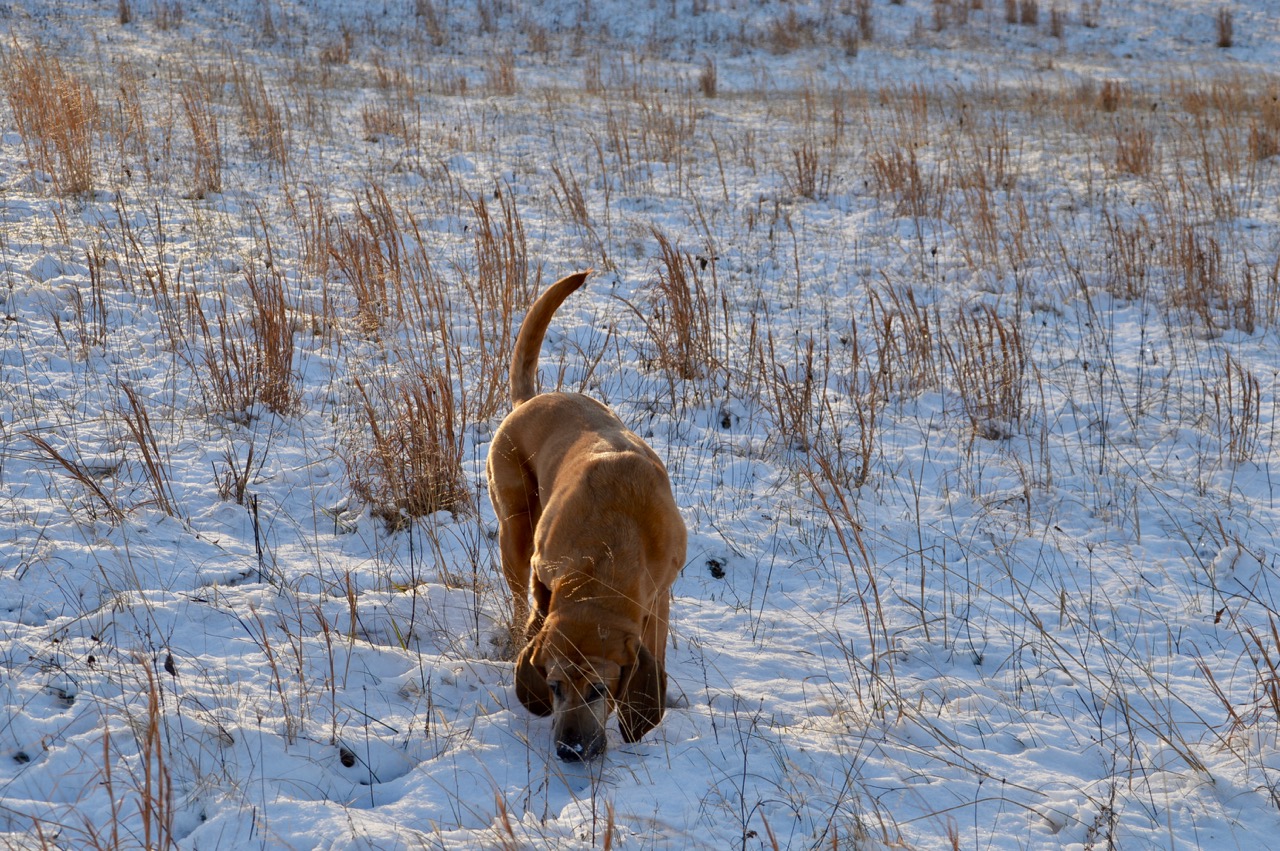 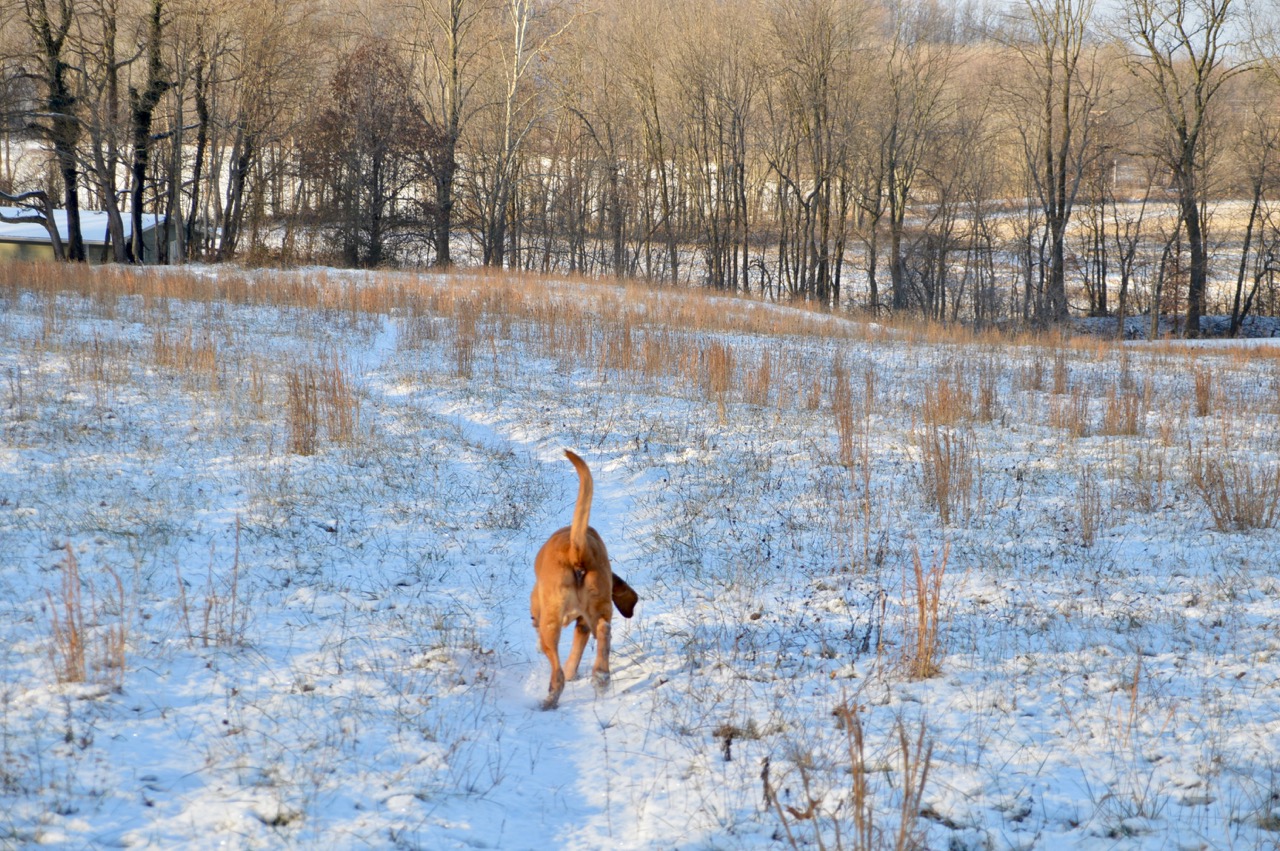 Neither of us were cold at this point. Like Barney (OFM) said yesterday, the snow makes our path easier to see. We took the 'alternate' path this morning. 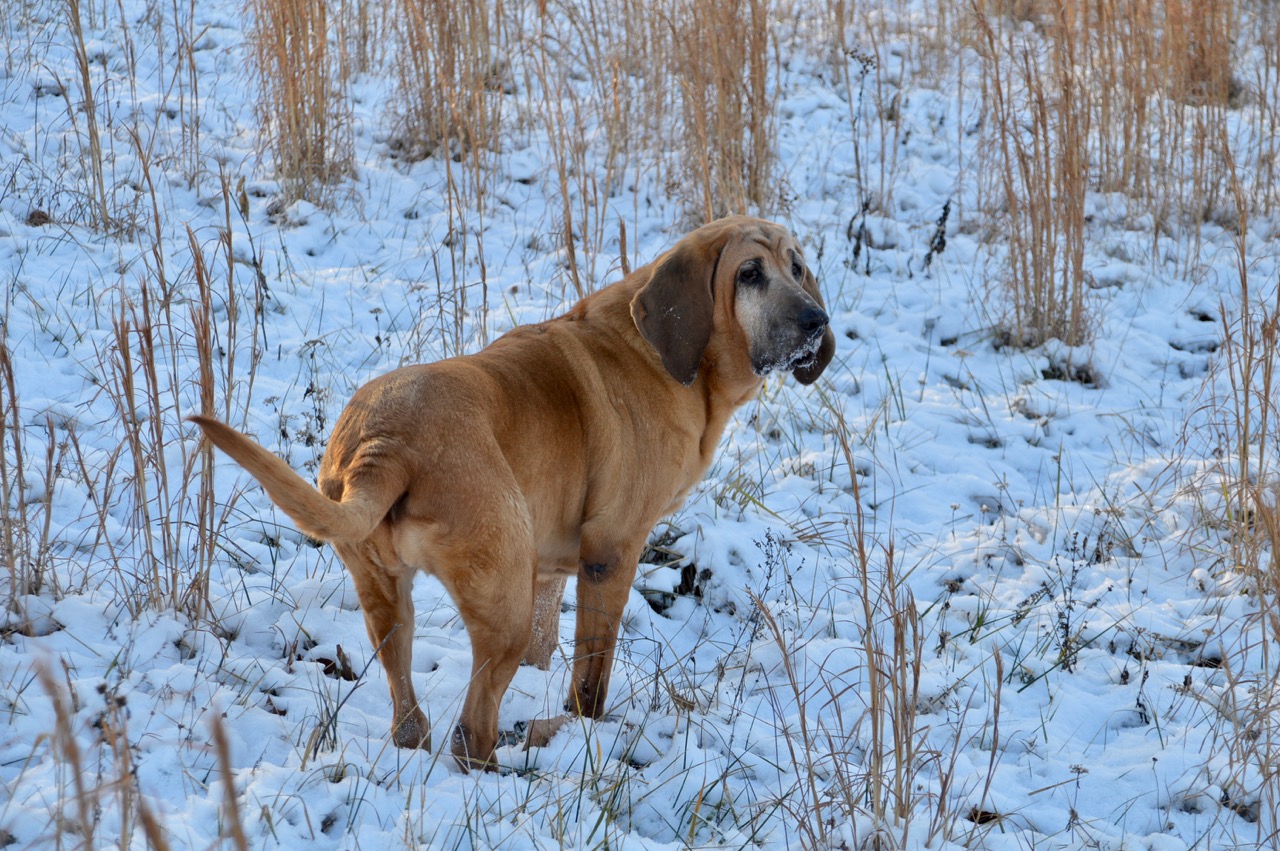 I thought that Sadie was about to tell me she was too cold by the way she stood ... but then she took off running into the field as I continued to walk back to the house. 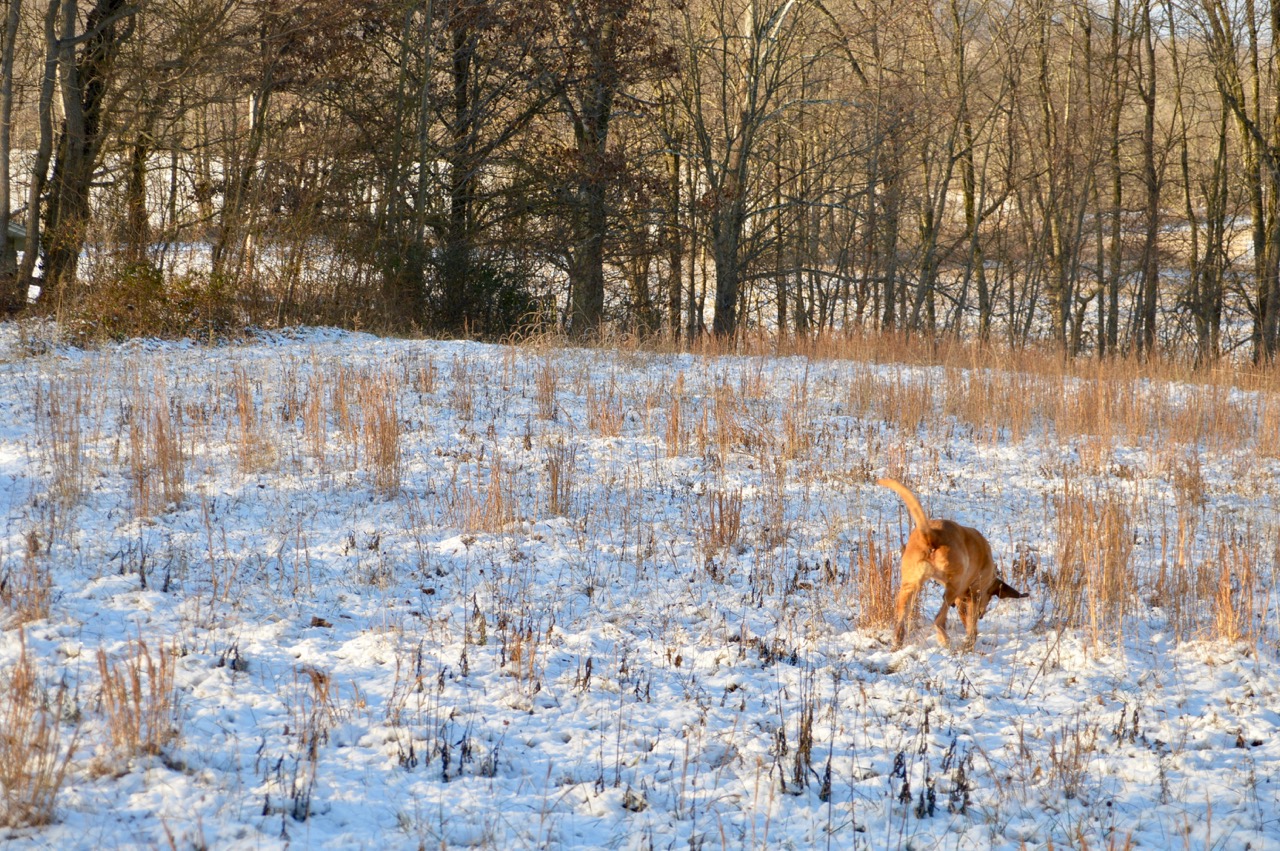 While writing this the sunshine has come out and is very bright. The temperature is 3° warmer and all of the hounds are in their deep sleep until lunch is served. There is no more snow anywhere in the 10 day forecast but the temps will stay in the low 20's for our highs.

It will be a pretty quiet day here in 'the tropics' of Southern Indiana today.
at December 25, 2017