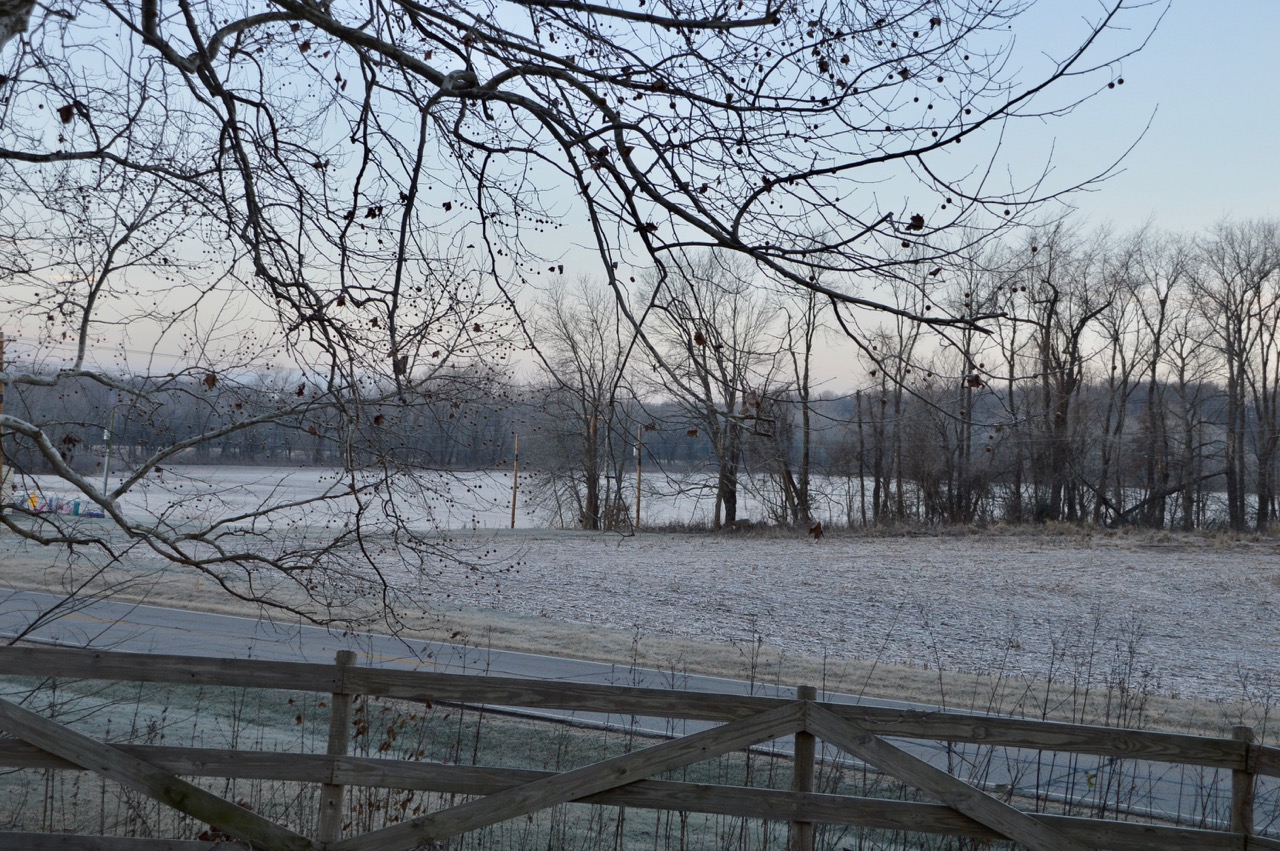 Light snow is forecasted for Saturday but it looked like it almost started this morning. It was nothing but heavy frost and luckily at 8am, no wind made 16° feel pretty warm. There is something Stella likes when it's below 20° because that is when she is the most energetic any time of year. 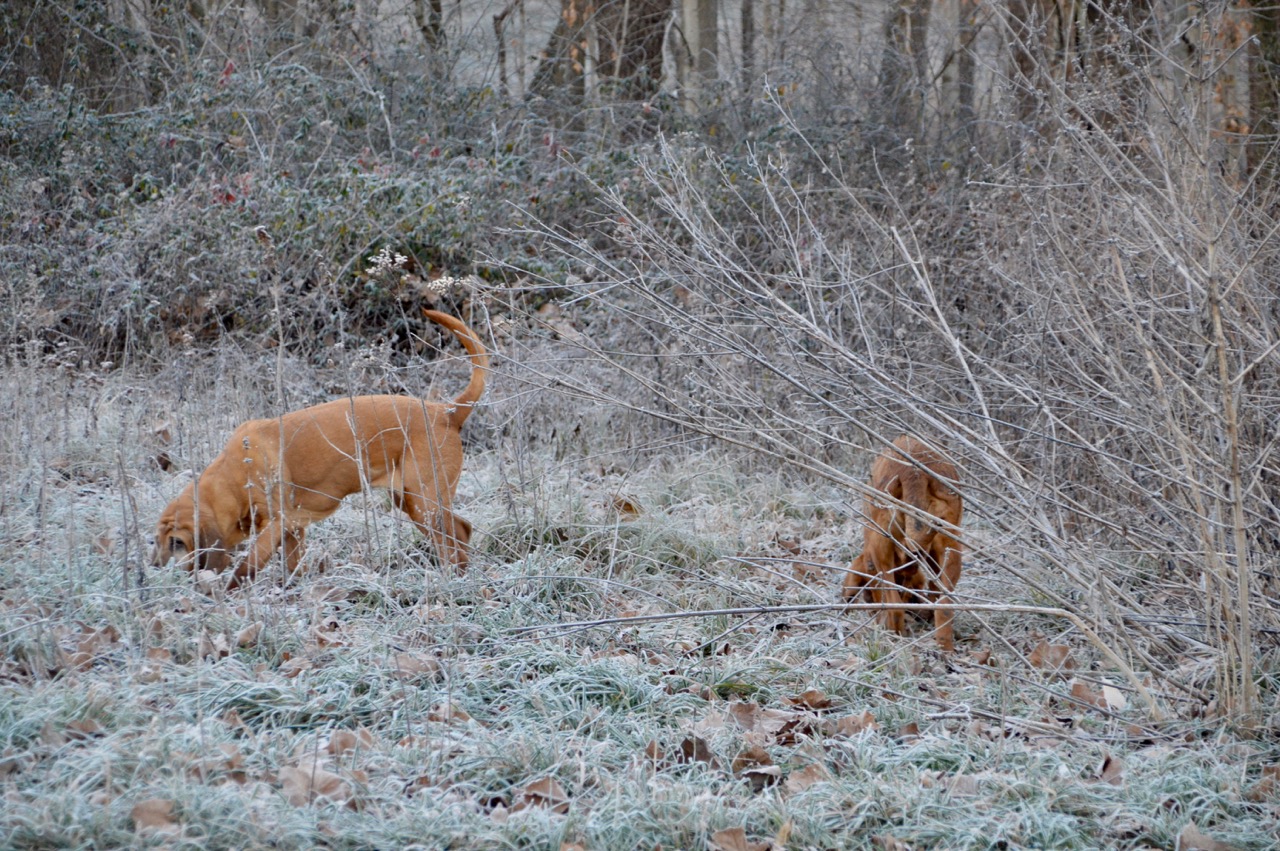 This is just left of the burn pile and behind the dead ragweed. I know exactly what has their interest. I forgot to the tell the story about Wednesday night close to 11pm. I had let the hounds outside for their last bathroom break befor going to bed. I always stand outside with them, small flashlight in hand to see where they go. Wednesday night was different. As soon as we moved to the backyard I see in the same place the hounds are in this picture, a few deer.

They immediately took off sprinting in the woods as I could hear all kinds of tree limbs either still on the trees or on the ground, breaking as they ran. Neither Sadie nor Stella knew what was going on, they just wanted to pee. 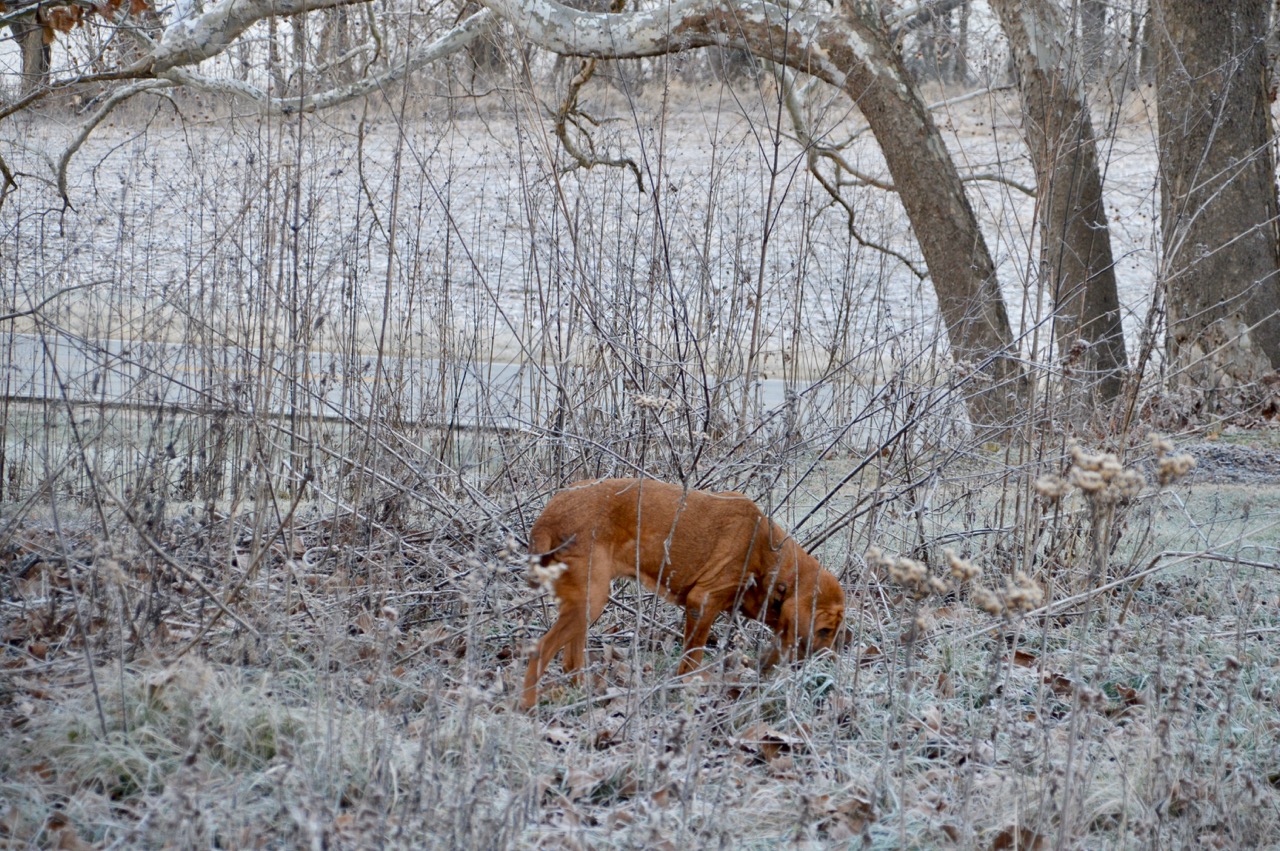 I knew from the start of this walk that both hounds would be on their own. I'd walk my pace, take pictures and they could move at their own pace and go where they wanted. They were going to get total freedom today. 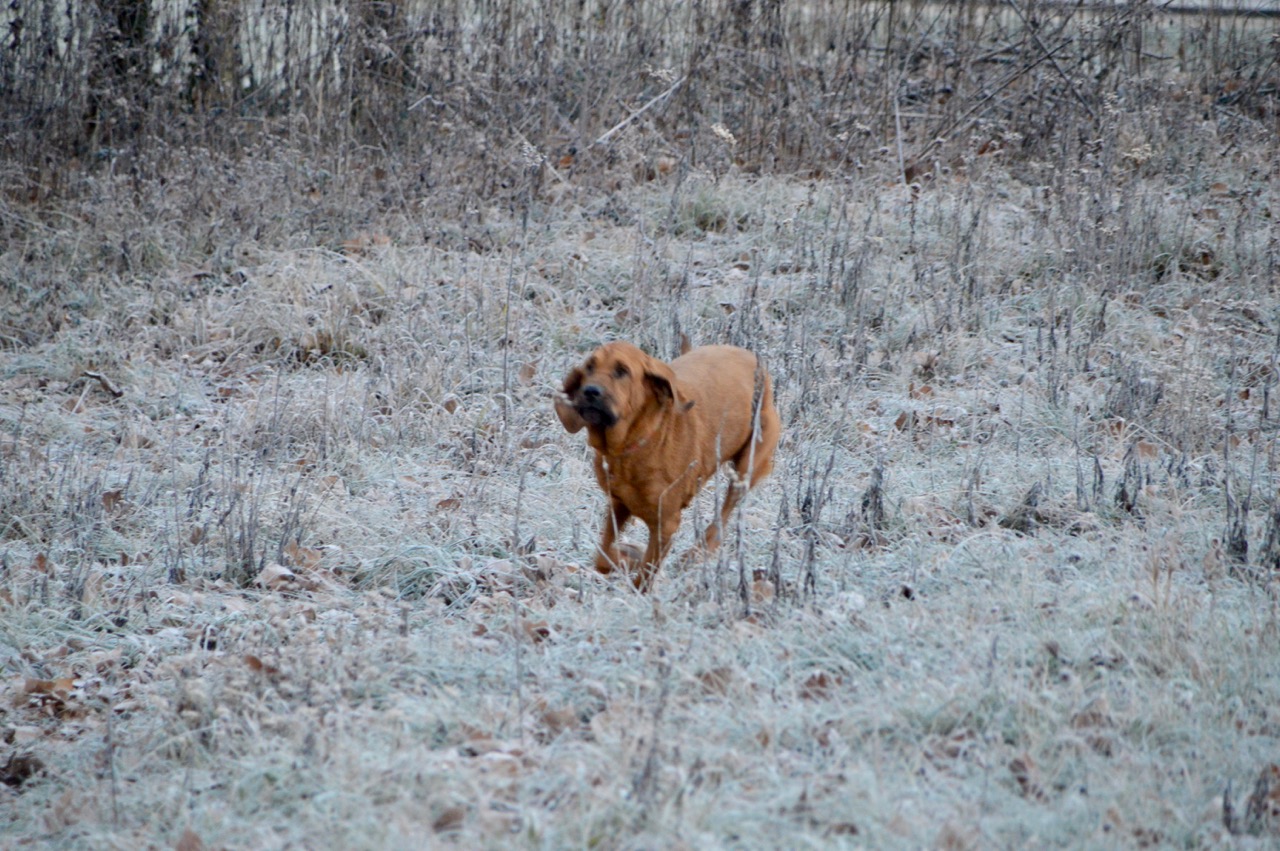 Stella didn't take long to decide that today she was not going to be left behind. It has taken a long time to see her running full speed but she was this morning. 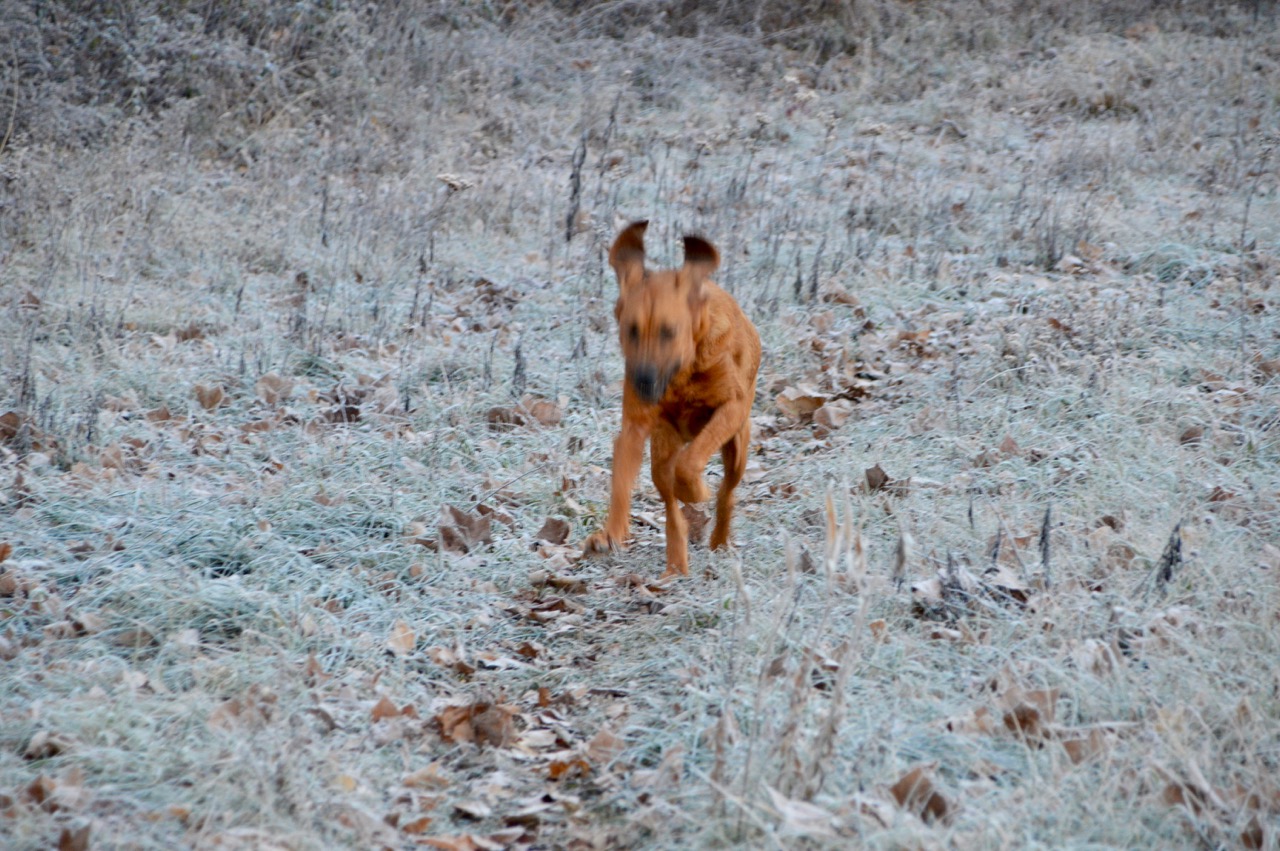 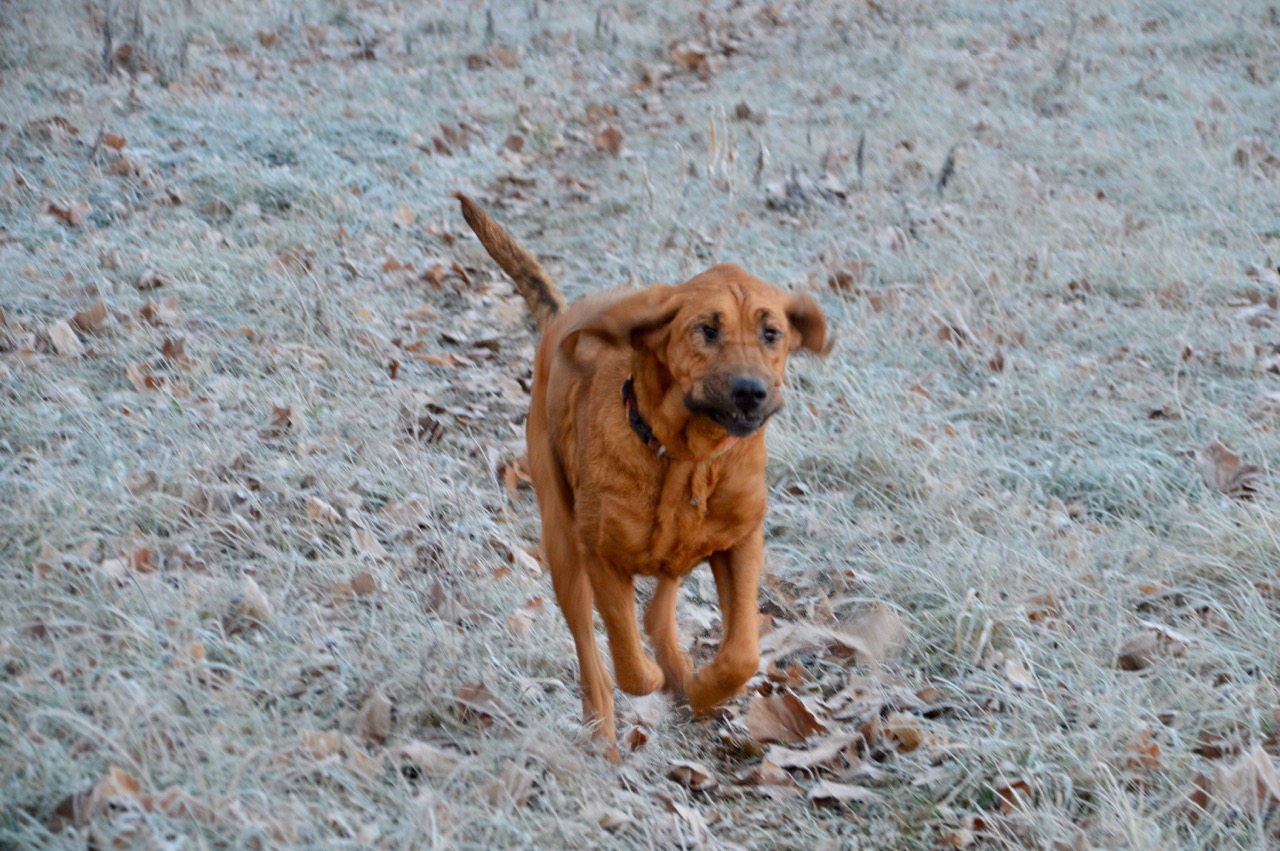 Both hounds were easy to see as their red coats stood out in the background of white heavy frost. 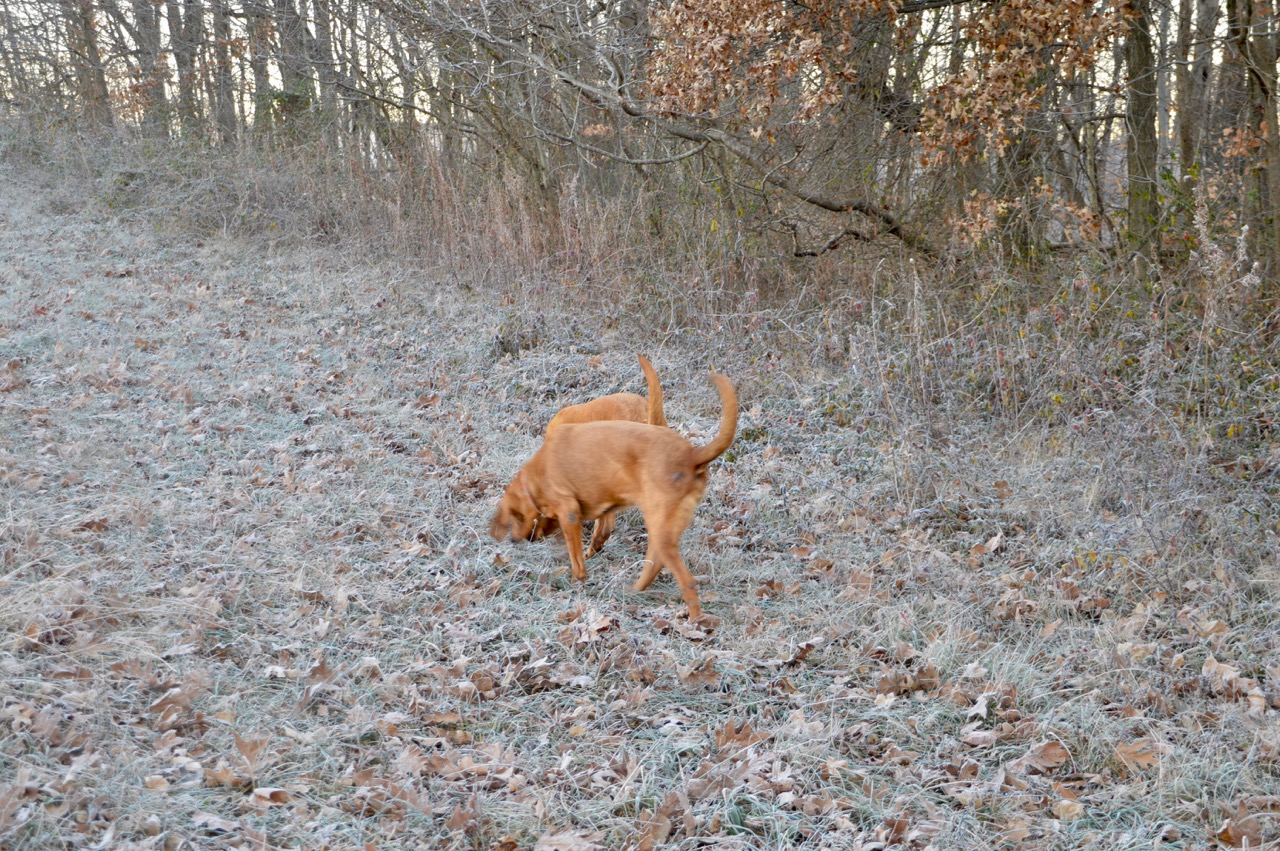 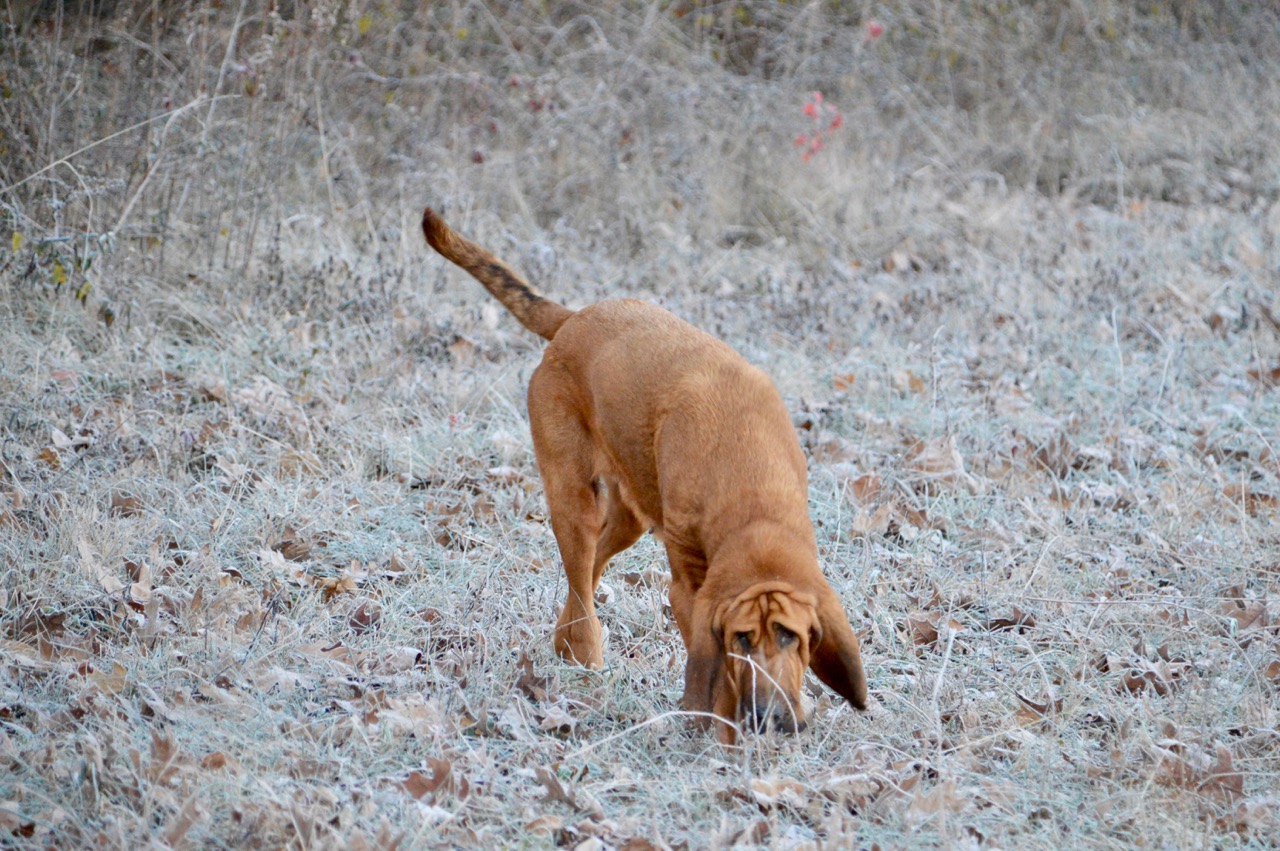 There will not be much planned today for outdoor activities. As weird as it sounds, in this cold weather the roads are dry and clean and  I have had the urge to take the Z4 out. It has a great heater so freezing temps will not be a problem. 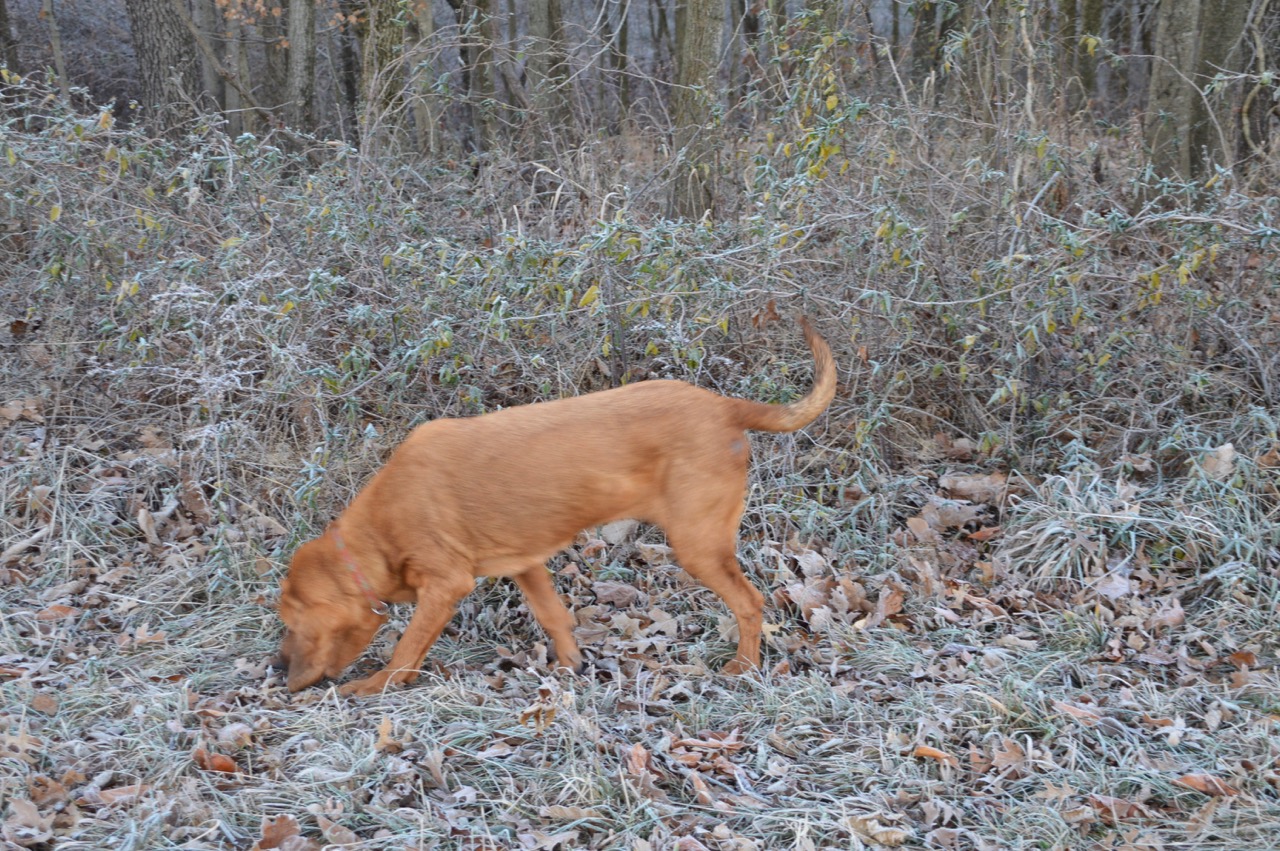 Weather like this always reminds me of when I had VW bugs in the 60's and early 70's. Since they were air cooled engines, their heating system was based on the engine getting warm. Then heat from the engine would cycle through the system up to you in the front seats. By turning the knob below the front of the driver's seat you could adjust the power. A flip of a lever determined if you were going to have windshield defrost or heat in the flooring area. 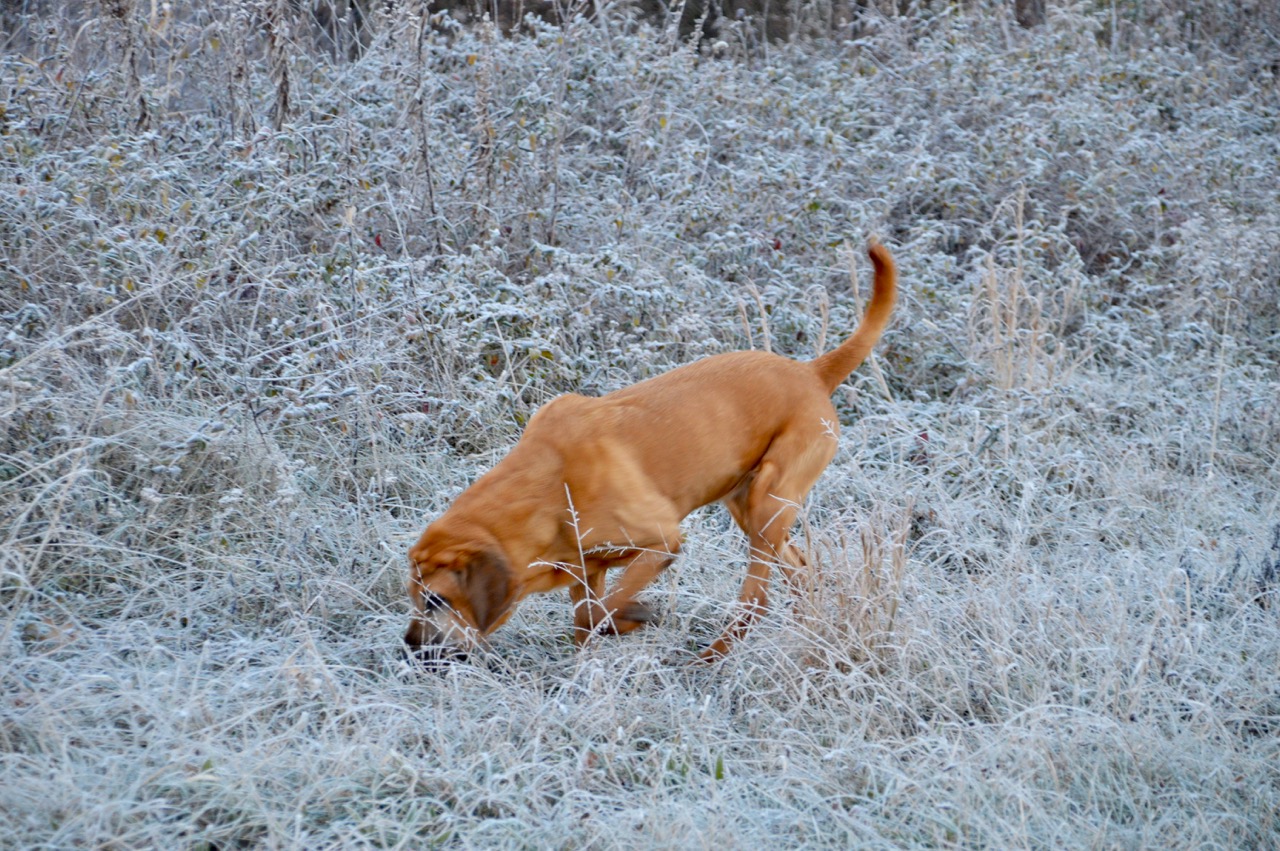 Sadie was chasing something this morning along the edge of the gully. 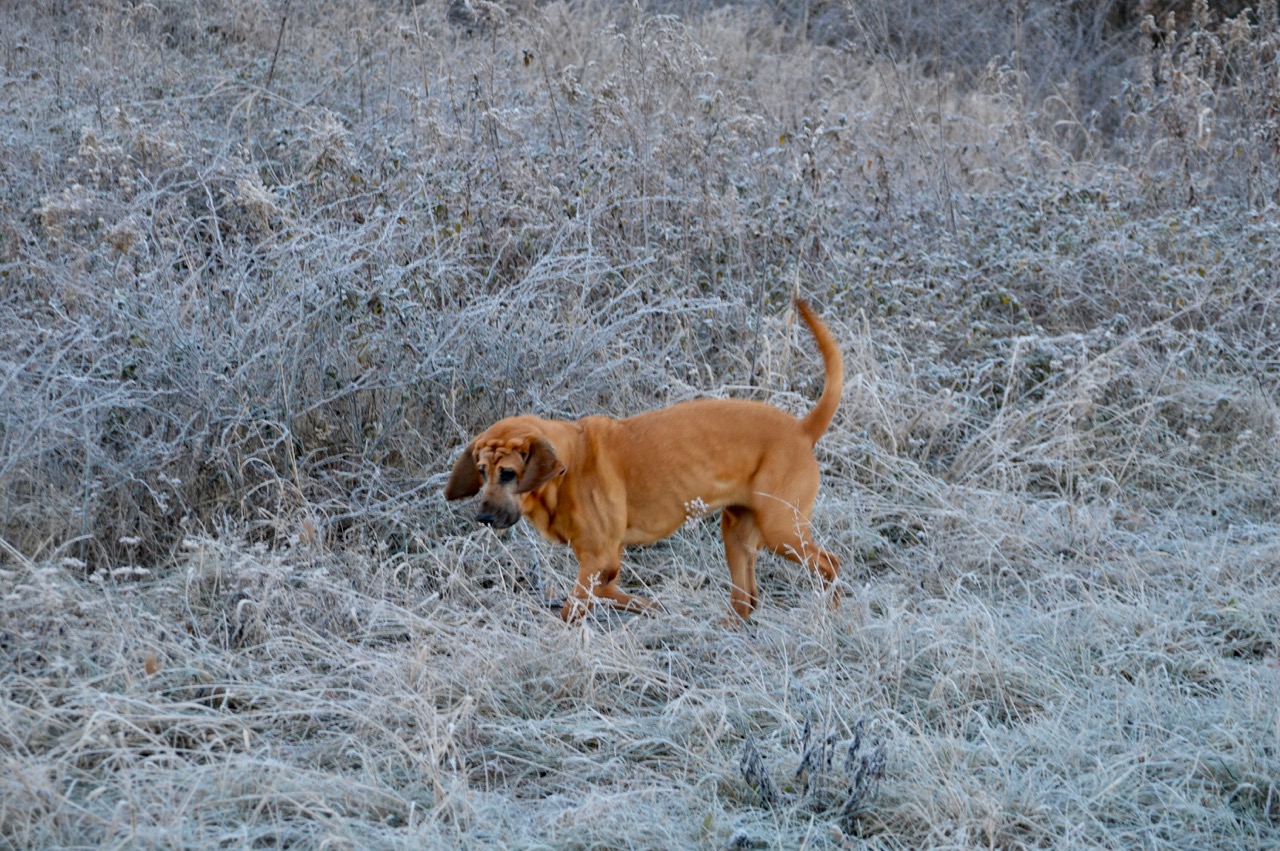 I am guessing she disrupted a warm place for a field mouse or field mice. 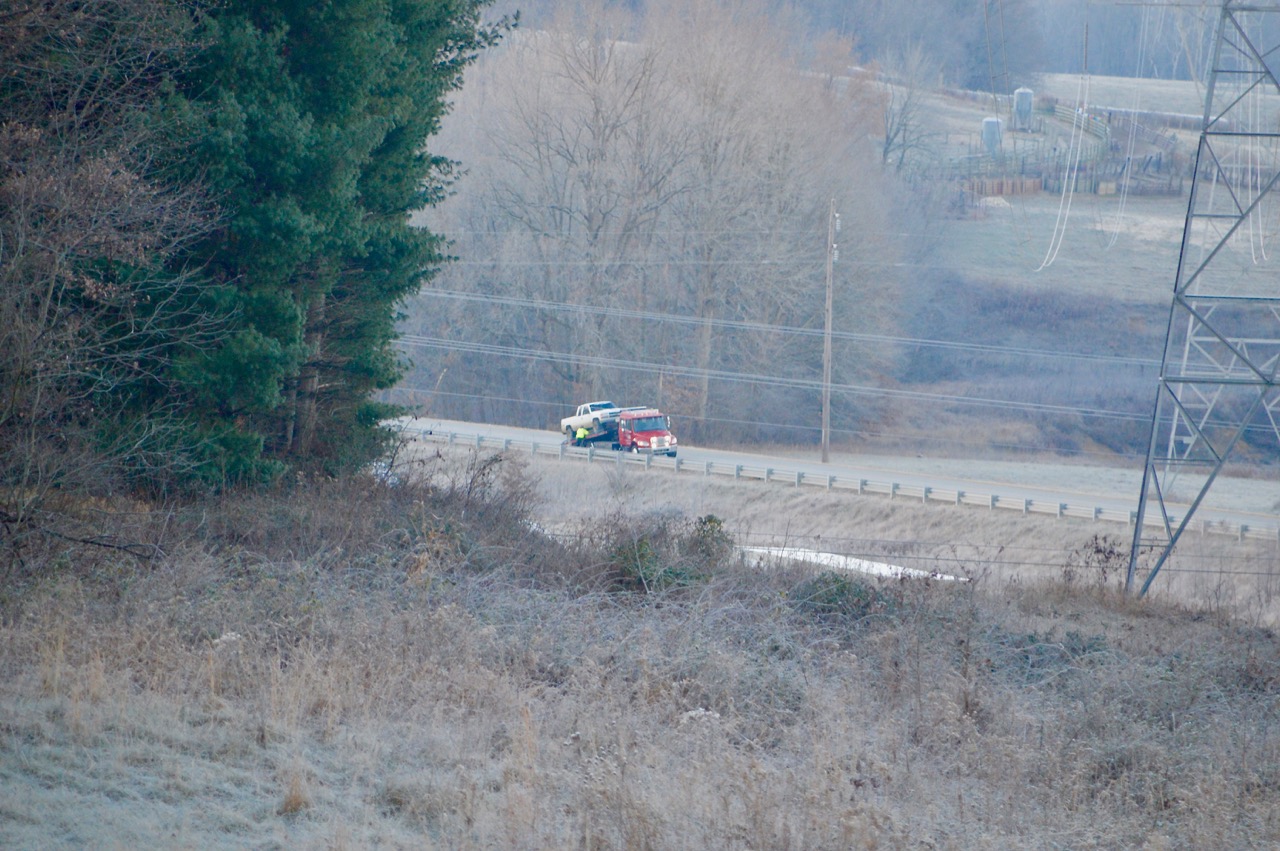 Someone is not having a good start to their day this morning. 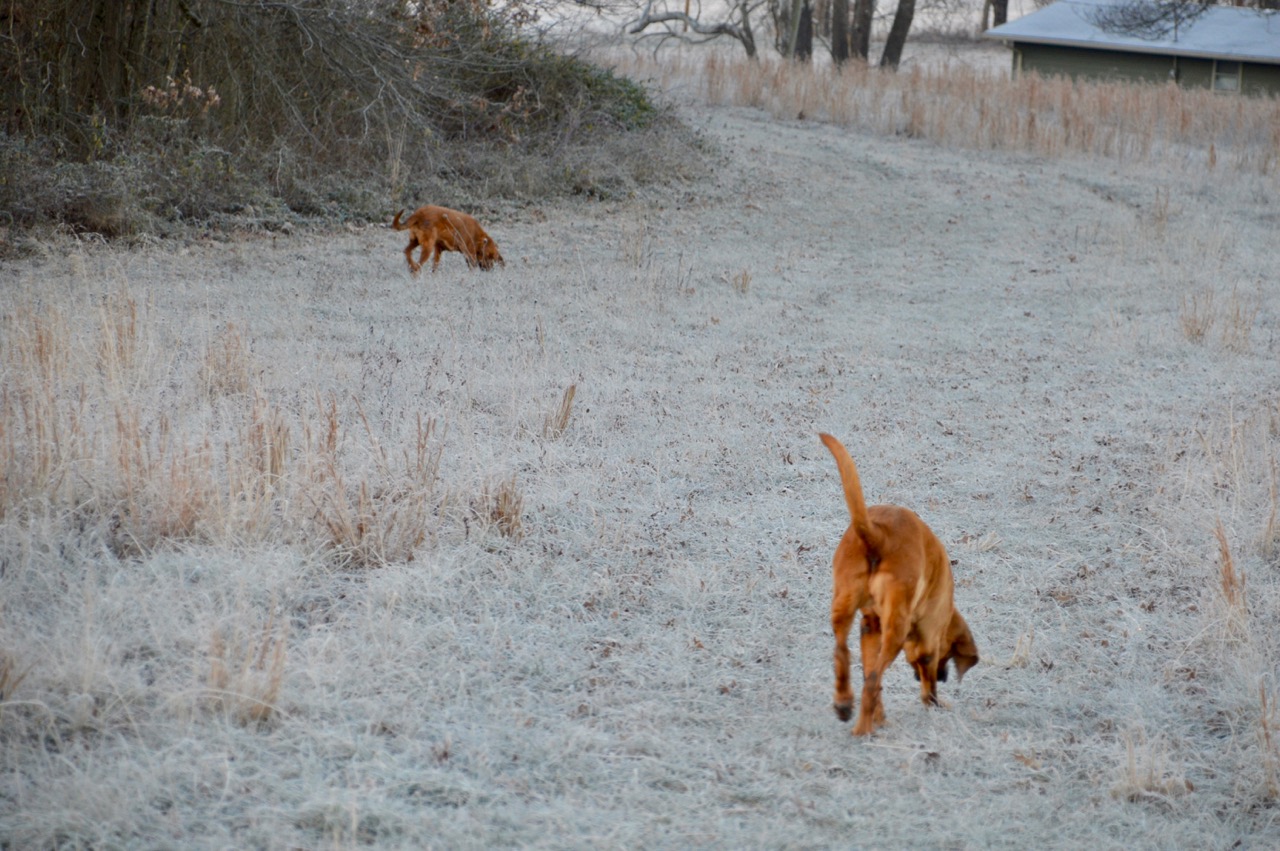 It did not take a lot of verbal commands to herd the hounds this morning. Evidently it was cold enough that they were as motivated as I was to get back inside where it was warm. Of course Heidi had us all beat and was in her normal spot, sleeping inside her sleeping bag while she waits for lunch.

The freezing cold kind of took all the motivation away for taking any photos for the rest of the afternoon. We did do another walk later in the day with only a retractable leash attached to Stella. It was warmer but still quite cold.

The more I use my new phone the better I like it, it was a good decision to upgrade even though I had no plans to until a couple of weeks ago.

Bright and sunny today but maybe snow tomorrow here in 'the tropics' of Southern Indiana.
at December 08, 2017