A Lot Of Questions Today

First of all after being back to a "public blog" status only 24 hours, I have shut off "anonymous" as an option for people to make comments. As in the past, all that produces is large amounts of spam. So they are shut off.

Maybe it's the 67° weather at noon here in the Midwestern "tropics" and two days before Christmas that has caused my mind to go into internal analysis mode.

I think it really started this morning after slipping my taped rolled long sleeve t-shirt under Winston to help him raise his hips. His legs dangled straight down and more important his rear paws both faced outboard.

After moving his paws to the correct position and then lowering him slightly to put a little weight on them ... his rear hips collapsed. I was hoping he would attempt to walk with only his front legs and try to put some weight on the rear legs.

I know .. I know ... it's only been 5 days since his injury with mostly laying around to rest and zero use of those back legs. You can't go too long before muscles start to waste away beyond repair. It started the brain waves to move inside me and nothing was positive. Obviously his quality of life changed drastically early Saturday morning. When it has come to my hounds over the last 28 years, "quality of life" has always been an important thing to me.

As I mentioned when this injury started, as long has he had his normal functions and that look of life in his eyes ... I would battle through thick and thin to help him recover with hopes of him regaining the use of his rear legs. As I held him with the t-shirt under his gut and at a normal height for his feet to touch the ground ... there didn't look like one chance in a million chances of that happening. I thought it might be time. His eyes/face tell me different.

So the questioning started with me realizing that he is 11 years and 7 months old, toward if not the end of the life expectancy of a basset hound. Sure they grow older than that. Harry was over 13, Max was just past 12 years old. With Winston that age has changed due to his recent injury.

How long will it take if it WERE to improve enough for him to walk again ... that's the million dollar question ... an older hound with nerve damage ... no idea how long. Also no idea if the use of his legs with a lot of rehab will every come back.

Is it worth putting Winston through all of that just to find out it's not any better than today????

Even though he has been on a blanket amongst all of us, blocked by a baby gate ... he has been whining continuously for the past two hours. He's had water, been outside to relieve himself multiple times and even slept a little before this whining period started.

Is he hurting inside? Is there pain I cannot see and he can't tell me where it is? When I sit and pet him .. he always stops.

Again today he is restless which probably means frustration and confusion for him. He wants to do those things he likes on his own and can't figure out why he can't. He hasn't been crated since he was a puppy.

I thought I had it figured out ... but I don't. If any of you readers are pet owners or past pet owners, we have all probably been in this same situation more times than we want to remember.

I've asked around for opinions from friends and two different vets. Of course in the end it is my and Winston's decision. I always thought the time would come when "he" told me it was time. It's been that way in the past for me with other hounds. Not a surprise that different vets have different opinions on what to do 5 days into this injury. It's also not a surprise that friends also differ in their ideas.

Here are some of them.

Personally I swing back and forth from one extreme to another. Looking at him when he looks up at me makes it even harder especially since those eyes still show life and "how can I get out of here" instead of telling me "it's time". 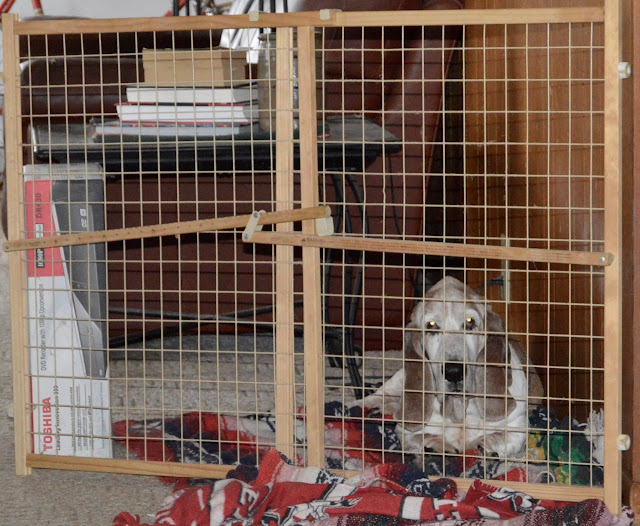 Luckily my other 3 hounds are helping me get through this period of time. It's never easy.
at December 23, 2015
Email ThisBlogThis!Share to TwitterShare to FacebookShare to Pinterest
Labels: Winston Decision, Winston's Hurts Back