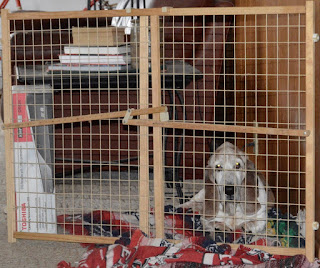 Edit #2 - After hearing from Contessa, Winston is back to gate-free

(I wrote this post early this morning and waited to post it. Before I posted it I received a comment on "Winston Fooled Me Today" from Contessa. A fellow Apple Computer and LongDog friend. She is also has a nursing background, so she is familiar with these types of issues.

She explains why Winston must be gated even when he starts feeling better.

Her Carmeh just went through something similar in May.

So I post this with 2nd thoughts after reading Contessa's comments and I am also going to follow her suggestions. Winston will be going back to a gated area.)

The only answer I could come up with was ... "the vet told me to confine him".

It was late afternoon yesterday when that question was asked. The question opened up my mental department that has a always allowed me to make my own decisions based on analyzed data. That question kept repeating itself in my mind.

He doesn't move that much to begin with even when he is healthy.


There was also another "sub" reason I guess, "to keep Stella or Sadie from accidentally walking on Winston". I could control that though. I am here 24/7.

So we fired a few emails back and forth discussing the pros and cons, as I was getting ready to take Sadie and Stella for an afternoon walk. The plan was to sneak out of the house quietly as Winston slept so he wouldn't see us, feel left out and start barking again. It was hard to do with two excited bloodhounds, that started jumping around when they saw me put my baseball cap on. Save this story for later.

Back to the question.

It got me thinking ... really, why gate or confine Winston when he is basically confined naturally in his later years. He doesn't run all over the house, he might crawl on the couch but he lost his jumping ability years ago. I mentioned in previous posts when he was healthy, his daily routine was to sleep in various spots in the house - get up go outside to pee - back inside to sleep or eat ... depending on the time of day ... and then sleep some more. 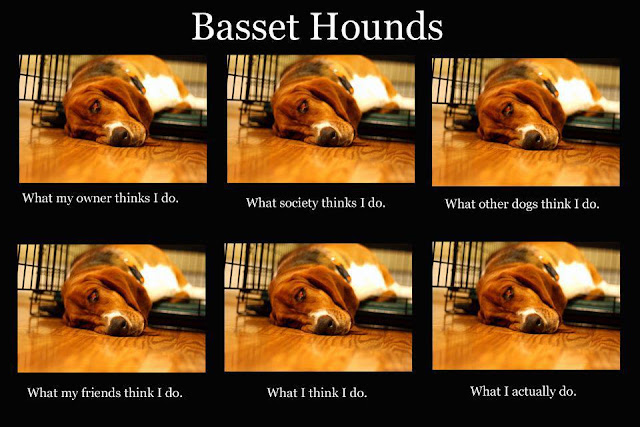 Not really much different than now ... except now I help him walk out the house with my taped rolled up t-shirt (vet approved). He 'walks' only a little distance in the yard dragging his hips/legs to the particular spot to dump tanks. (vet approved) I carry him back inside to the blanketed area. He stays there, has all week ... unless he wants on the couch then he will sneak off and stand in front of it for me to lift him onto the couch.

Is that enough confinement?

The only difference is, there would be no baby gate in front of him, no box and small heavy heater to make the 2nd wall of the makeshift kennel. He still gets the same kind of rest, same amount of rest. When I leave the house, the bloodhounds would be shut in the bedroom with the doors closed. Heidi would stay with Winston in the living room. 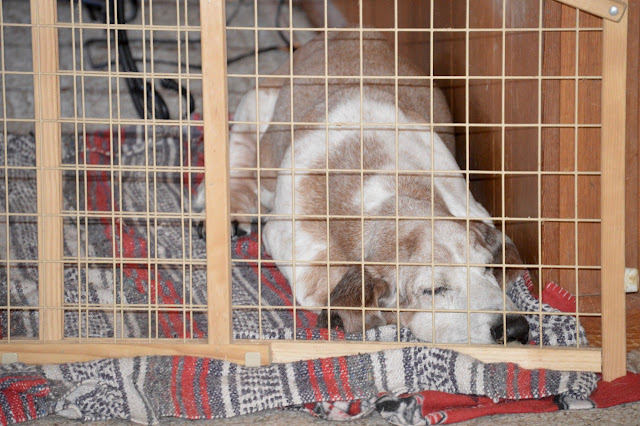 He looks pretty happy without the baby gate in front of him blocking his view. 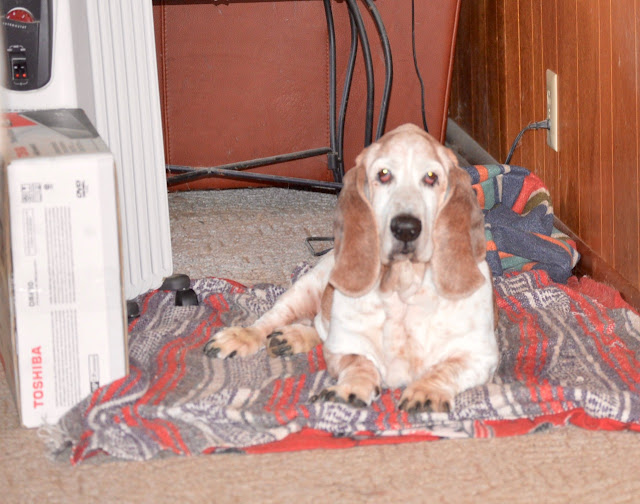 It doesn't and didn't then sound like a big deal to me. It was a better deal for Winston and ... he would like it better, seeing he was back in his old routine without having that caged view from his blanket.

Another friend told me to follow my intuition. Great idea and one that I am going to follow.

I received an email from someone that has a dachshund, (NOT Contessa) with the typical long body dog that has back problems on occasion, saying I needed to have "strict confinement" for Winston or I would regret it later. I think most will agree that dachshunds will run inside a little bit more than a 60# basset hound. They will jump higher, run faster than a 60# basset hound inside and outside ... in normal healthy conditions. That breed is not as laidback as a basset hound.

They (dachshunds) need to have "strict confinement". That's a word I also read on a forum I found last night. I did more searching and more reading on what "strict confinement" really meant. I found this to be pretty consistent among people discussing it online:

So back to the short story of going for a walk yesterday. I decided that would be Winston's first test "gate-less". While the bloodhounds and I were doing the daily walk, Winston and Heidi would have the living room -- NO GATE for Winston. He was on the blanket sleeping when we left.
Twenty minutes later we are back home. Before going inside I glance through the door window to see what he his doing.
Last night while continuing the gate-less experiment - he laid on his blanket, wrapped himself up in my sleeping bag that I loaned him and went to sleep. That's all he wanted to do - normal routine.
So when the vet says to "keep him confined, let him out long enough to dump tanks and then back inside to rest" while taking his meds:
So with that I would like to thank my friend/blog reader once again, for asking the question that got me thinking logically and giving Winston more freedom at least mentally ... and that's got to help in his efforts to recover.
I'll be asking the vet today if that arrangement is okay, as we go in for Winston's 1st K-Laser treatment early this afternoon.
If anyone needs "strict" confinement in the tropics of southern Indiana ... it probably should be me.  (laughing)
at December 26, 2015
Email ThisBlogThis!Share to TwitterShare to FacebookShare to Pinterest
Labels: Winston's Confinement, Winston's Status