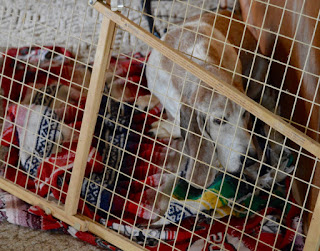 Winston must be feeling better because he has been really feisty today. Meaning he will not sleep for hours and hours like he did yesterday and last night. It has been a day of a more whining than the past few days. It could mean he is feeling better and voicing more of what he wants.

At times that means he wants to go out and does what he needs to do. That is very very encouraging that he has bladder control. At times he wants to move to a different spot that has been set up for him in various places in the house to be confined. That baby gate is pretty versatile.

I am finding out there is a fine line between confining him so he can rest and recuperate or let him walk inside, dragging his rear legs. Like just now he has been whining at the corner of the living room blanket. I pulled the gate away to see what he would do. He scooted over to the water bowl for normal consumption, turned and laid on the floor.

So I'll keep him confined, even now. He got his water now it's back to rest.

There is also a fine line between spending every minute with him when he is awake instead of just letting him be, maneuvering on his own for him to get in the position he wants. I have no doubt that he is confused, frustrated ... but like all bassets ... stubborn as hell.

The vet tells me it is ok for him to "walk" to find his spot to pee after I set him down in the yard. Here is his new walking style. He had moved way too many steps (scoots) in the time it took for me to run inside to get my camera. 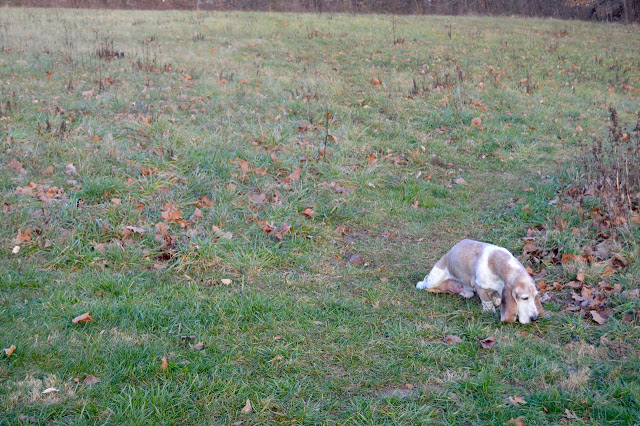 I do get a response from him when I ask different questions and trying to figure out what he wants. At times he moves to his front feet from the laying position, sits up with his ears forward and shows me with his eyes that I have guessed the correct answer. I am beginning to think he is starting to enjoy his pampering a little too much. LOL

On thing I have caught on to though ... when he is whining, he isn't looking for attention. He never goes in the house and never has since trained as a puppy. So when he is whining he has to do one of two things or both. I confirmed that again this afternoon. He came back inside and went to sleep without any gate standing around him.

He doesn't care for the baby gate blocking his "way out" in various locations, but it is what it is.

This next photo is of Sadie. For over 7 years of her life she has had no interest on getting on the bed. That is until Saturday night when she figured out that Winston was hurt. I caught her and Stella with Winston after they had their lunch.

Winston started his afternoon siesta like this until the two hounds woke him up. After I moved him to a different location, that is when Sadie jumped up next to him for a nap. 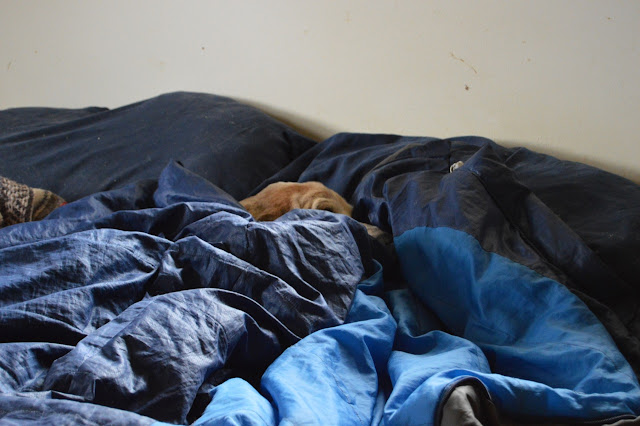 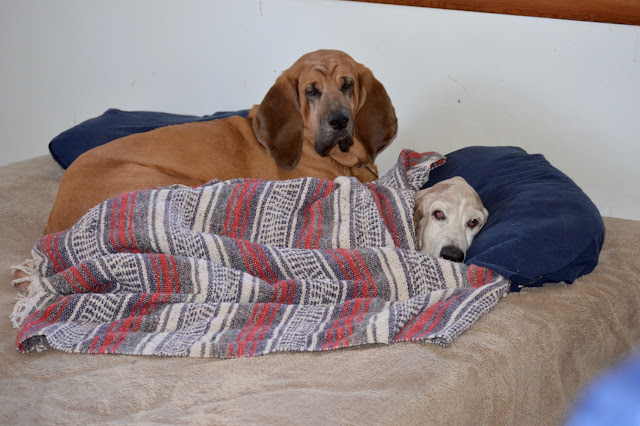 My new t-shirt "helper" is working  pretty well. He will walk while I use that but not all the way to where we are going. I am sure that he gets tired hauling his 50+ pounds on just two legs. I have measured around each leg and his belly like the manufacturer showed on their website and have ordered a hip harness for him. That will change the pressure points from around his big belly to up in his hip/leg section. The vet office also suggested this today.

I have a section in the corner of my closet that I cleared out when all this happened. I then put in a stack of pads and blankets for him to sleep on. With the baby gate in front that is his location at night to sleep, when I leave to house to run errands or like today when I took Stella and Sadie for a walk through the field.

They were both excited to walk ... We haven't been able to walk since Friday due to Winston's injury and the rain. 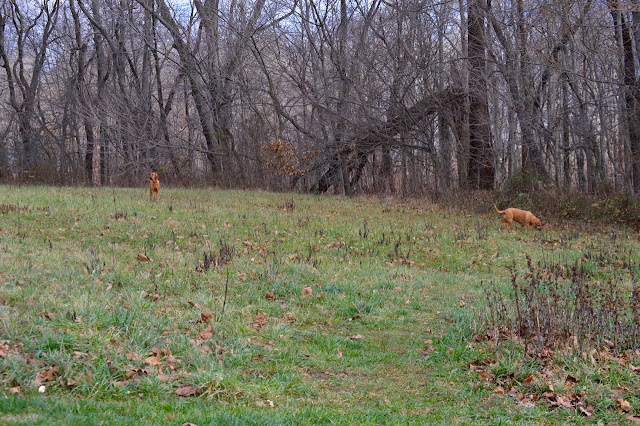 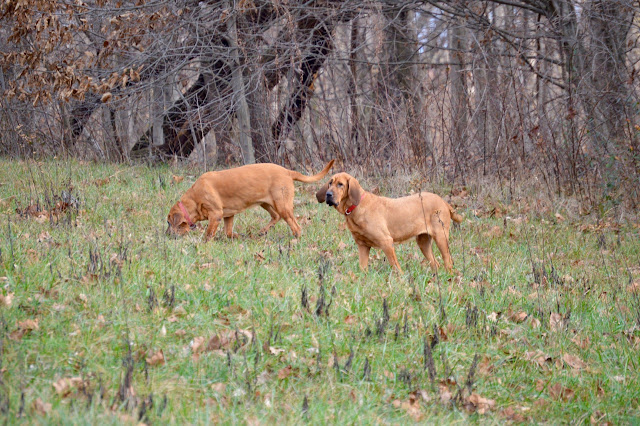 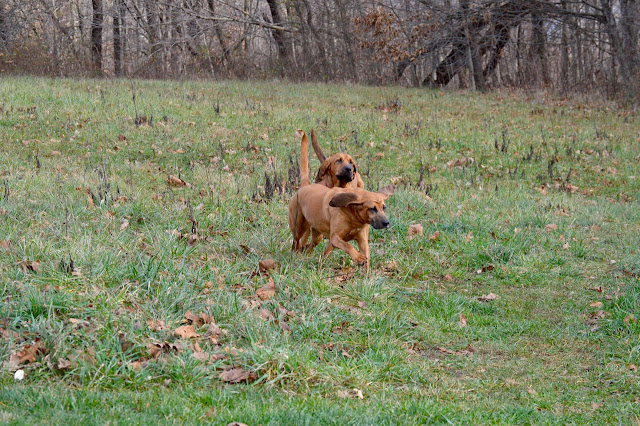 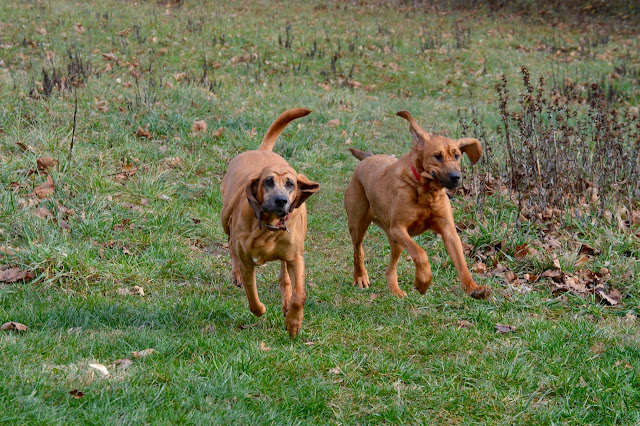 If you remember a few weeks ago I tried the Diamond Grain Free with Chicken. I have always suspected chicken as being a possible problem for her. Don't know but just a hunch. It didn't work out really well. Her skin cleared up but she was itching more than I had ever seen her. A big clue.

I gave her a soak in warm water and Epsom Salts to relieve some of the irritation. It seemed to work, and then Winston was hurt and is keeping me quite busy. Still her skin did improve on the Diamond Grain Free.

So for the first time I am trying the 4Heath Grain Free with Duck, duck meal and sweet potatoes. Only one protein source. I can buy this at the Tractor Supply 30 miles away yet faster than when I go to T&T Feeds in Bloomington. It is their brand name of dog food, made and packaged by Diamond.

So far the changes have been an eye opener. Hair growing THICKER, less to no itching and chewing.  Have I finally found the right food for her?? You will notice that hair has grown back on her paws, the back of her front legs, sides of her stomach and her lower rear hips ... all those areas were bare skin at one time. The vet in February told me not to have that hair to grow back. 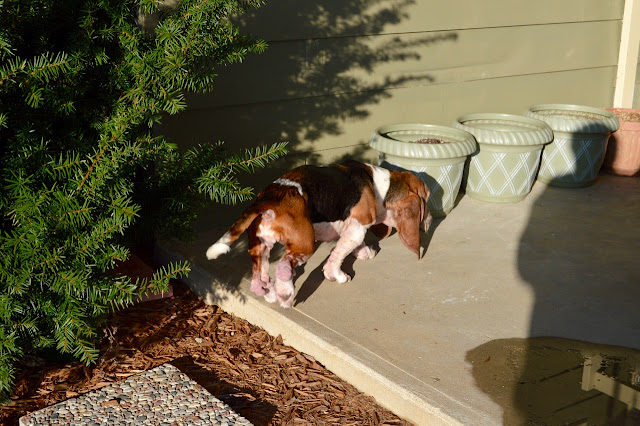 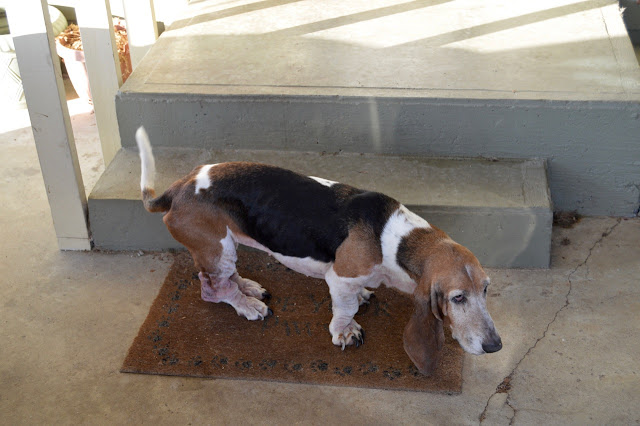 She is not interested in staying outside long but she always finds the time to search under and behind the yews. She would not look at the camera today with me begging for her to "look up". I imagine she smells that stray field cat I saw one night after midnight running in front of me. 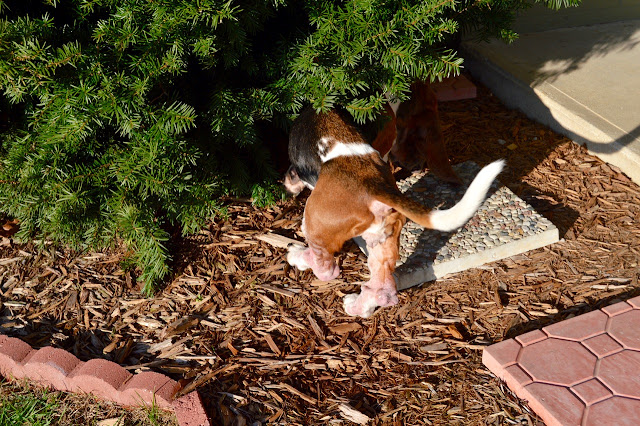 I will say that I have not seen more improvement in a faster amount of time than when I was feeding her the Earthborn Grain Free. They did not have a duck/sweet potato blend.

I am not sure I am going to continue labeling each blog post title with "Day #". I like it because I can track improvement. Yes ... I do have a spreadsheet for Winston where I am tracking stuff as it happens by date, time plus the color red for signs of improvement and blue for any negative stuff. So I am thinking since the blog is back to public I will make the first post of the day with the "Day #" in the title and leave it off for other posts on the same day.

It's really strange. I had a post about it and photos showing all the damage to my bedroom. Today I went in to edit a couple of names, hit "update" and for some reason Blogger moved that post to the top of the list as a new post for today, December 22 like it was being published for the very first time. A few readers viewed it before I edited it. I couldn't figure out how to fix it after a few different attempts, so I deleted it.

I guess I should have never let her alone with the other hounds that long, but on November 24 I took a trip to see a friend, not only to visit to but deliver my iPad Mini to him. Decreasing my internet footprint I guess. A month later, I haven't missed it. Anyway she was doing fantastic until that day ...  I was gone too long, all day and she freak out.

Because of that incident plus a couple of more recently when I've been gone only an 1-1/2 hour, I have basically stripped out my bedroom to the bare necessities. Leaving only what I don't mind having destroyed (whats left) in the room. There are no blinds on either window (she tore them down) with no plans replacing them. That means my bed is stripped down to the sheets and one chest of drawers.

Last week she did much better, no damages and I was gone a little longer than an hour. So we are starting from scratch in her training for separation anxiety. She came with that reputation when I decided to get her, so it's not a surprise but she literally goes totally nuts for longer periods of time. She is too great of a bloodhound to be mad at her. She just doesn't like being left alone.

It was a beautiful day here in the "tropics" of southern Indiana today ... not quite t-shirt weather outside.
at December 22, 2015
Email ThisBlogThis!Share to TwitterShare to FacebookShare to Pinterest
Labels: Heidi's Skin, Sadie the Nurse, Stella's Separation Anxiety, Winston's Status