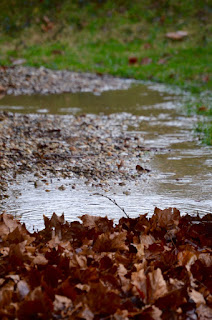 Believe it or not, I do have a drainage system that runs the full length of the house and about 3' away from the house. Besides all the rain we have been having for the past few days, non-stop, I also have the underwater drainage from that 10 acre field behind my house that all ends up over on the south edge of the bank.

Consequently at times like these the drain system cannot keep up. I guess that is similar to Winston's bladder right now while he takes double doses of Prednisone the past 5 days.

Yet by 4:15 pm today we had our last down pour, the sun even popped out of the clouds for just a few seconds before they returned to the gray and ugly storm clouds we have been living with recently.

Overall though, Monday continued to be a pretty good day for Winston and the other hounds.

He had been sleeping on his stomach since his accident December 19. I don't know what that accident was just that is the morning his back quit working and his legs collapsed. Anyway about 15 minutes ago, he wakes up ROLLS ON HIS LEFT SIDE and goes back to sleep. He has not been able to sit on his left or right sides, nor sleep anywhere but on his stomach .. photo below: 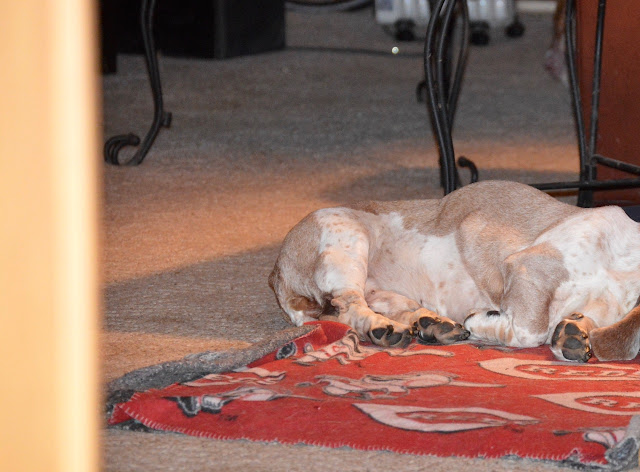 I learned two new things in this journey with Winston today.
I know those are not earth shattering ideas but they are two things I found out today and the second one I found out by mistake. It has worked out well for him.
Anyway it's been a very relaxing day for him. He got a lot of sleeping in which for him is good. He never whined nor cried in pain (no signs of pain for many days), Stella and Sadie were never excited and Heidi 'photo bombed' one of the photos of Winston. (excuse the dust) 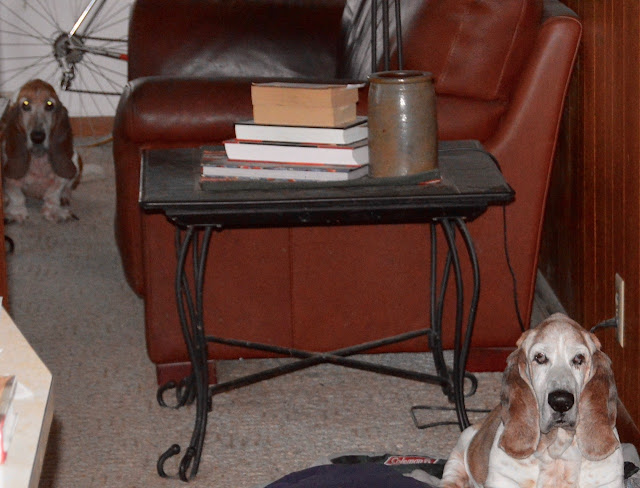 Even with the dark and dreary skies, temps in the low 40's and some level of rain this afternoon at all times ... things never looked better since this is the tail end of all the storms. I have adjusted to the new routines and challenges, knowing nothing is promised in the future with Winston but he is giving it his best shot to get well.
Also today is the last day of double doses of Prednisone. That has to be good for him. Plus on a day like this, the coffee is tasting a little bit better so I had a 3rd and 4th cup for the day.
Heidi seems to be looking better after the Epsom Salt soak on Saturday. Still for YEARS, she still chews and itches her skin ... maybe not as much but still does that and I have come to the conclusion she probably always will.
Stella and Sadie went outside after lunch at my urging. But with the light cold rain they were not enthused and probably a little upset that I even drug them outside in that kind of weather. As soon as they were back inside, Sadie jumped on the big chair and Stella stretched out on the couch and both were snoring within minutes. 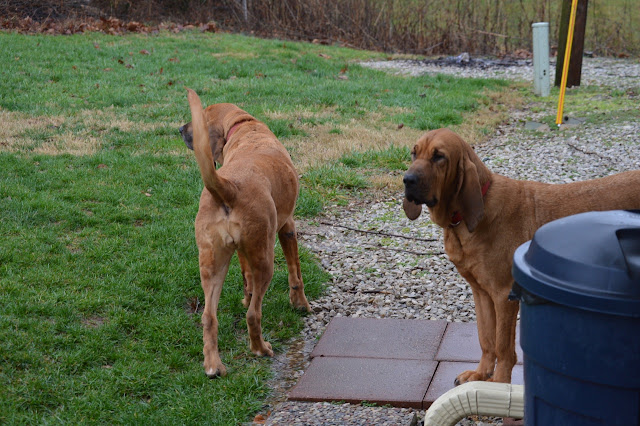 Soon after returning from outside where Winston dumped both of his tanks, had some water ... he was feeling an afternoon nap might be good. In this photo he is almost on the last stage of lowering himself into the position to sleep on his stomach. 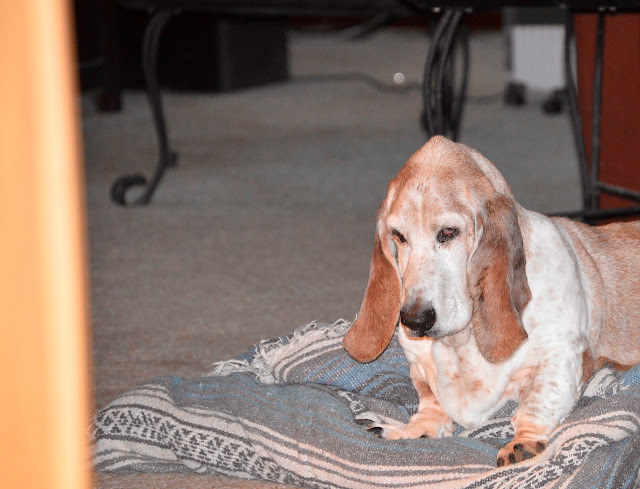 He heard the flash click open on the camera when I pressed the button and that turned out to be a pretty good shot of him looking good, even with his wet mustache. It might be just me but you really can't tell he is injured. 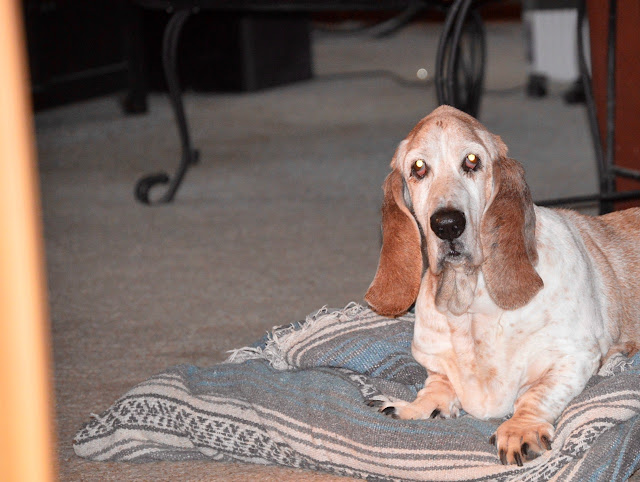 Here is our water system. The glass is for me, water only. I used the smaller bowl for him in hopes of keeping his ears out of the water as he drank. It does that most of the time but he has a tendency of drinking from the 2 o'clock position of the bowl and that gives him enough room to drop his left ear tip into the water ... it must taste better that way. 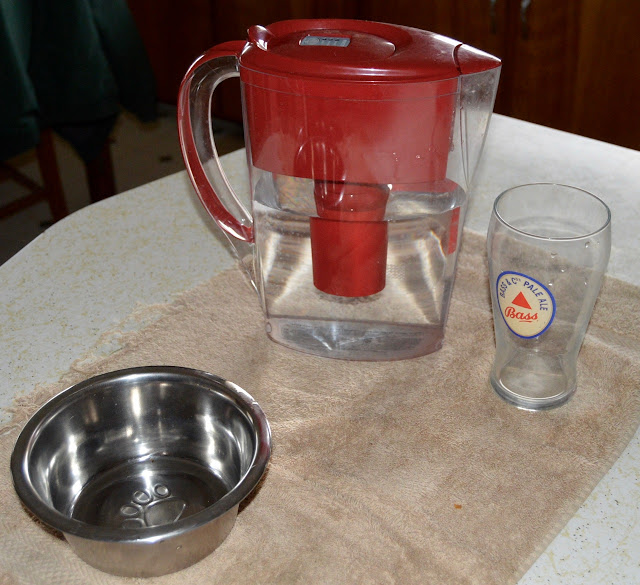 After the water and a change of some new warm blankets right out of the dryer Winston is in the afternoon sleep mode ... but not for long. 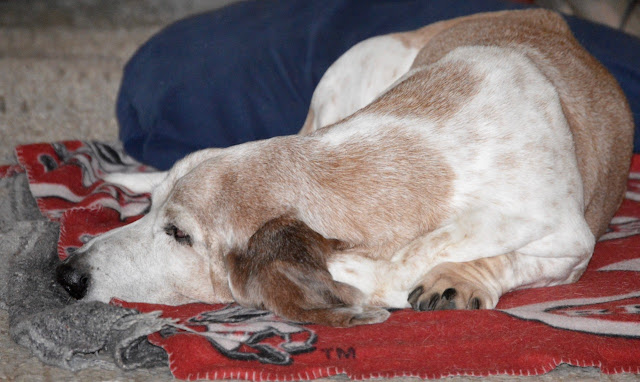 I knew when I glanced at him to see if he was still sleeping that this pose of him looking back at me ... he was getting reading to explore. I had seen it before. If he is elevated somewhere he will give me that look before he jumps but being on the floor at the time ... it just means he is getting ready to 'walk' somewhere without me knowing. 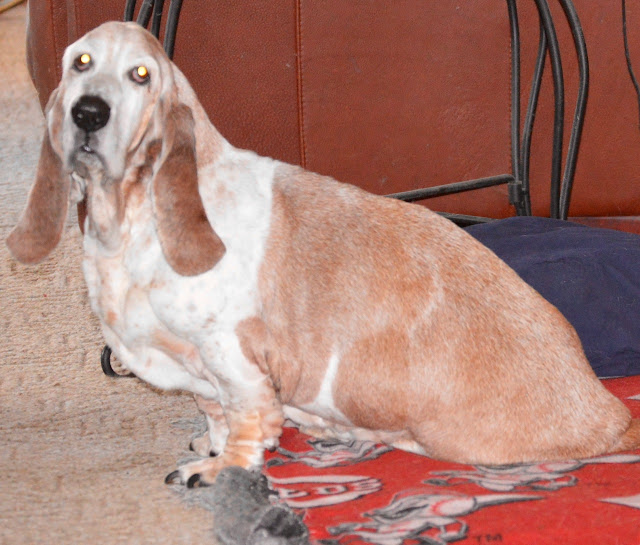 Stella thought she had him blocked but Winston scooted right around her, hips and legs dragging as his strong shoulders and two front legs had him moving faster than he should have been going. I caught him red-handed and he knows it. 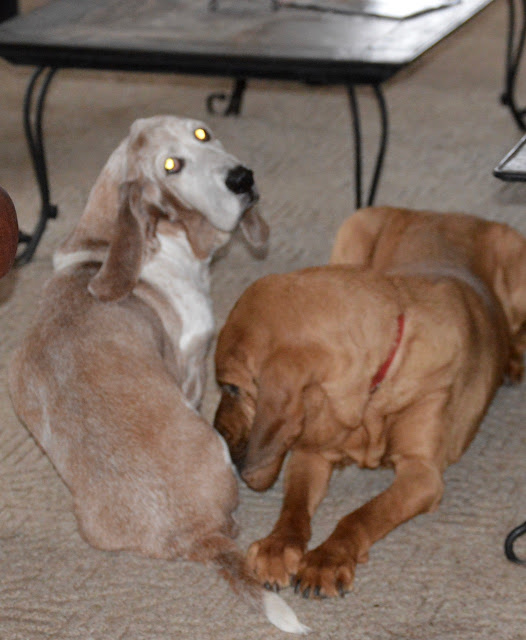 I did give him one more chance of not leaving a free and open area - He took off again!!! So I had no choice but to roll the mini heater over, my box and the baby gate to barricade him in the blanketed area. He immediately started scoping out the area for an escape route and a plan. 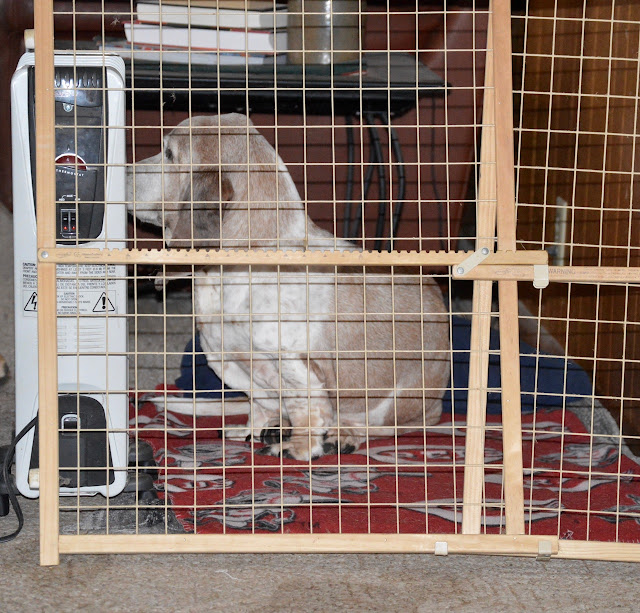 He tried to make me feel guilty for putting him back in 'jail' but he was feeling so good today I knew he would take off again if he was not contained. He seemed to be wanting on the couch. With the deep soft leather cushions, it's hard for him to walk or move in his condition and probably not really good for his bad back, so I am not going to give in. 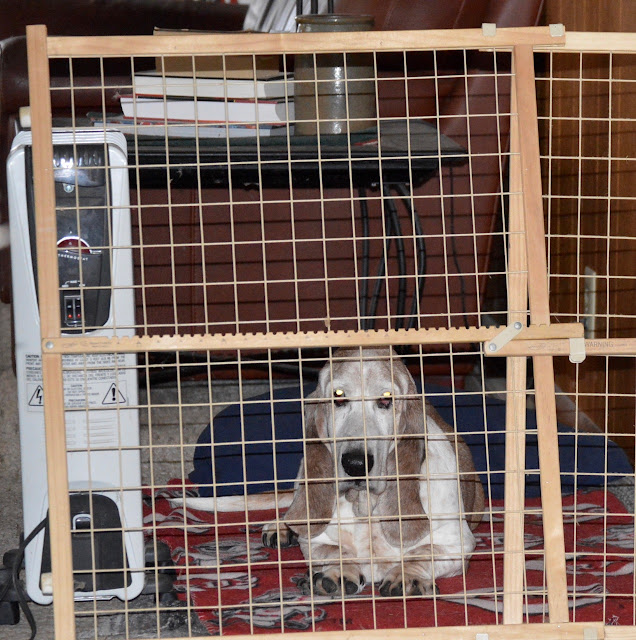 He finally gave up, called it quits and has been sleeping every since. As I write this that has been a little over an hour. 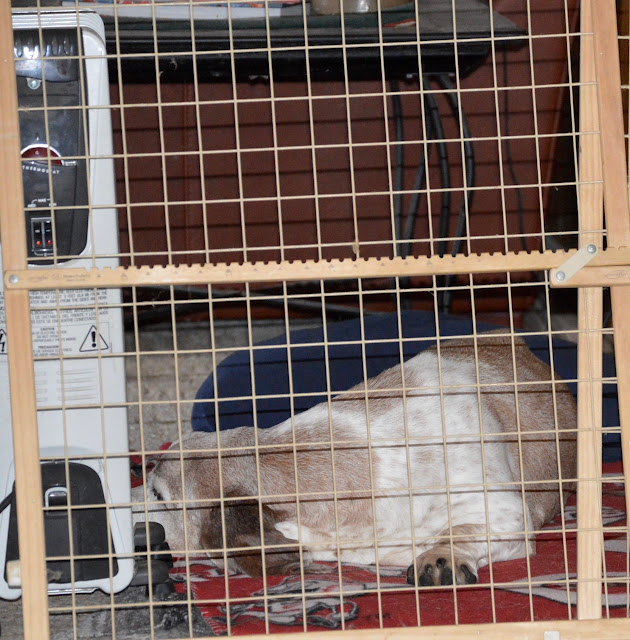 I don't have photos because both of my hands were holding each end of the taped rolled t-shirt at the time, but while we were walking around the backyard today I could swear he was trying to stand on his back legs. He was walking through the wet very saturated yard, I had his hips lifted with the t-shirt in hopes we were looking for a place to poop. That is the way he acted.

While I am looking at his tail, he right rear paw moved to the normal position. I reached down to place his left rear paw in the correct position  and lowered his hips a little bit to see if he could handle any weight. It was less than a minute, but fairly long, before he sat back down.

To me that is a great sign and we will work a little more on that as time goes on.

With cooler temps but dry weather tomorrow and sunshine soon after, things are looking up here in the tropics of Southern Indiana. Winston feels it ... he just needs to be loose to show me.
at December 28, 2015
Email ThisBlogThis!Share to TwitterShare to FacebookShare to Pinterest
Labels: Heidi, Prednisone, Winston Stands Up, Winston's Status