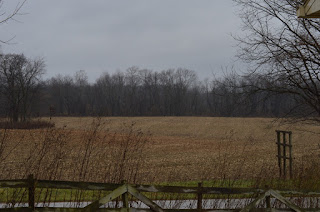 It's a cold, dark overcast, windy and rainy day. At least each time I have taken Winston outside it was not raining and he could pee without getting wet. Progress is slow as expected but I do see a little more improvement.
He was restless on the floor blankets last night and I couldn't figure out what he wanted about 8pm. Found out he wanted on the couch next to me. He slept there until we went to bed at 10:30pm. For the night I put him in the temporary closet crate and he went right back to sleep. 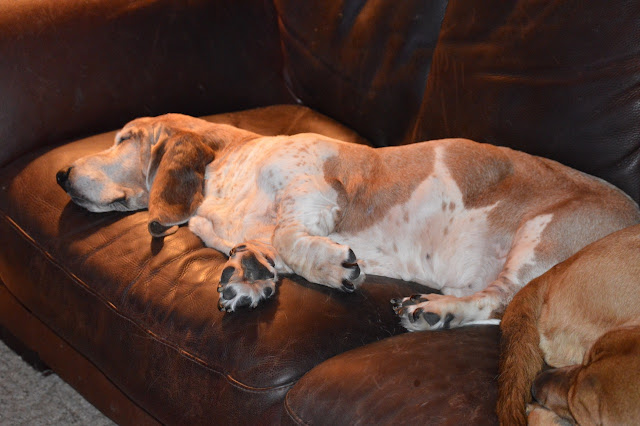 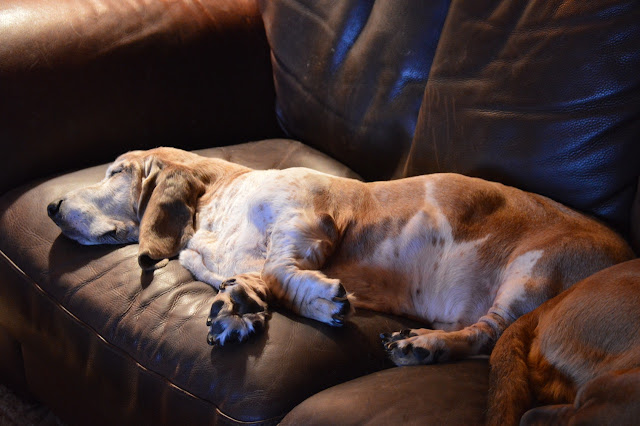 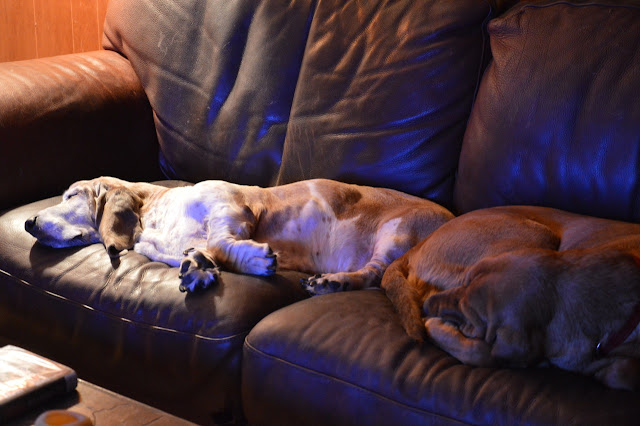 A little after 3am, I hear him whining a little, not really loud but enough for me to hear. Took him outside and he peed immediately. High winds, very dark at 3am. I put him back in bed with me and we slept until the other hounds woke up a little after 7am.
We all went outside like normal, then breakfast. I had sat him on the living room blanket and told him to stay. Of course the bloodhounds are excited to eat as always. That got Winston excited so he "sprints" to his food dish, while dragging his back legs. I stopped him and got him to eat his food right there. He has a great appetite for food and water, like normal.
He slept all morning in the big chair with the baby gate in front of the chair to keep him from getting down. Slept more this morning than he had based the times in my spreadsheet for him. 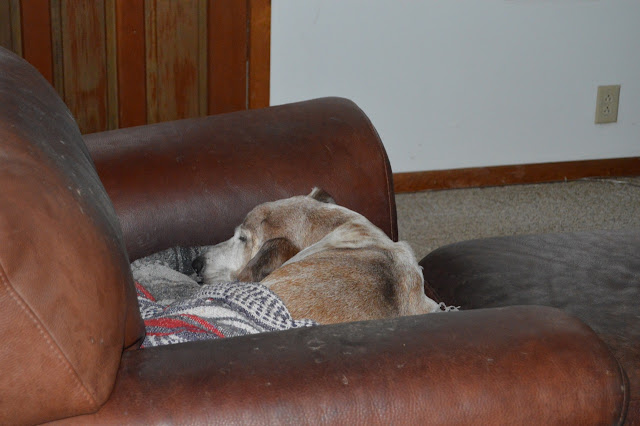 I heard slight light whining around 1pm ... took him outside near his pee spot that he smells. Well he walked out into the field dragging his hind legs and took another crap (that's good) and a firm stool but not as brown in color. That color change could be the Ritalin.
Back inside I put him on the blanket and while I was doing something he "walked" into the bathroom to his water bowl to drink his normal amount of water. Back in the chair to sleep and a baby gate in front of it to keep him in the chair.
I believe I need to get the hindquarter harness so I can help get him outside instead of trying to carry him all the time. That will relieve my back but also keep his spine straight when we go outside. He is so long that its hard to keep his spine straight and parallel to the ground when I carry him.
The other hounds know that something is up. Sadie and Stella play but still stay quiet most of the time. Heidi sleeps most of the time. I make it a point to give them a lot of attention while Winston is needing all this assistance.
Sadie cannot figure out what is going on with Winston. 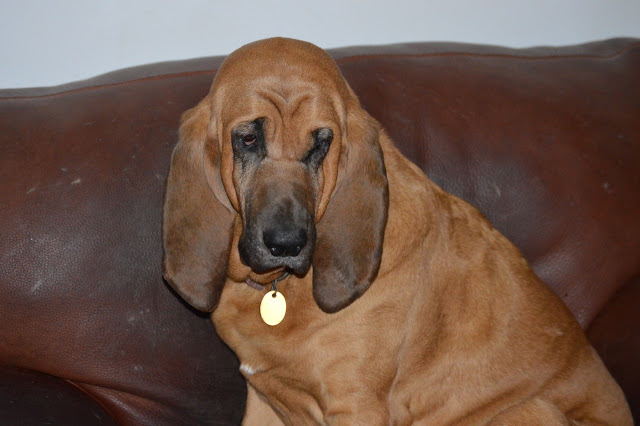 He moved moved around 3 different times while sleeping this morning, chasing direction on the chair where he was sleeping. That's a good sign I believe. Good appetite for food and water, firm stool again today. It will be a slow process but I think he will recover.
I will only post once per day, so each time I post will be saved until I publish the post later each night. 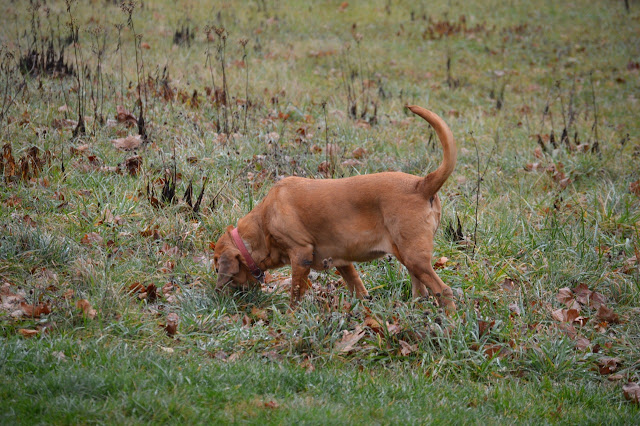 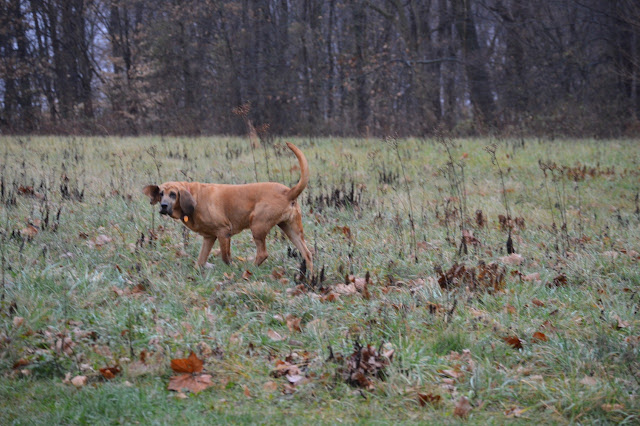 Winston spent most of the afternoon sleeping. He did eat his afternoon meal without any issues, drank normal amounts of water. I put him in the closet crate since I was headed downtown to buy some dog food.

Stella's separation anxiety returned for my short trip. This time I let Heidi stay in the bedroom unlike in the past when I would leave her in the living room because I had a feeling she and Stella was fighting enough to draw blood the last time they were left together.

Today I guess I had so much on my mind that I left her in the bedroom with the other dogs. BAD MOVE on my part!!!

Although ... Heidi's neck on top was saturated.  Behind her left ear was soaked but no blood and no drool ... just wet. Could that have been Stella's drool??  Did Stella cut herself on the sharp pieces of the baseboard electric heater?  I don't know, can't find any blood drops anywhere but the floor.

I don't know though ... Heidi could have been the aggressor. I have caught her sounding pretty mean when Stella is trying to get her to play while Heidi is laying in the chair or on the couch. They bark back and forth to each other but Heidi is angry, Stella is just playing.

While Winston was "locked up" and didn't seem to mind staying in the closet crate....it has blankets on the floor of the closet and I use a baby gate in the front for the fourth wall. I vacuumed the house and started laundry.

Afterward he came out and stayed on the blanket in the living room location without the gate and never moved. After a couple of hours he turned and stepped toward the chair. So I moved Heidi out of the chair and put him in the chair with the baby gate in front. 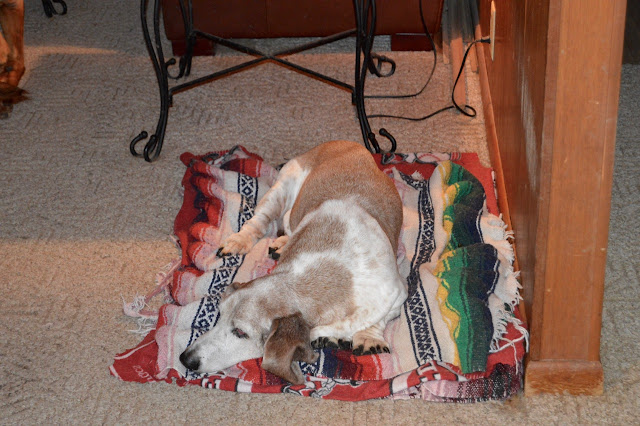 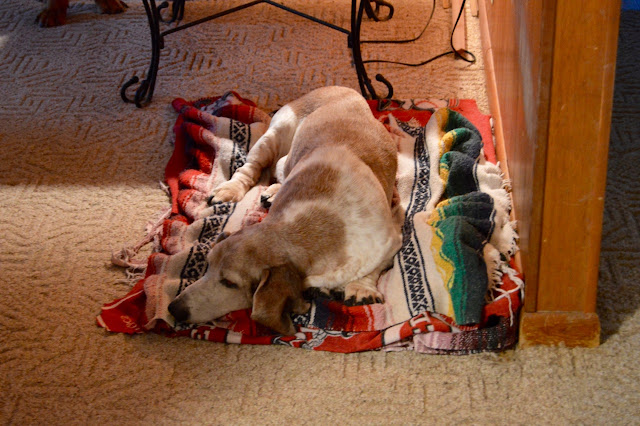 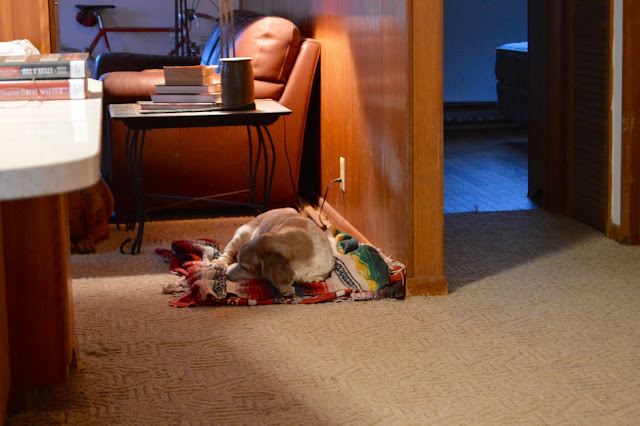 I caught Winston scratching his head with his rear right leg !!!!!

Its 5:50pm, all the hounds are sleeping. My back is killing me from lifting him and carrying him in and out to pee. If you didn't know you would not be able to tell Winston is even hurt until he started to walk.
at December 21, 2015