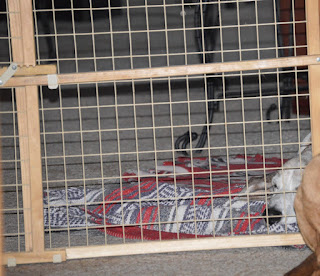 The rains disappeared late Monday afternoon. The winds picked up and the temperatures dropped a little ... but it's great that Winston can go outside without standing in the blowing rain. He went from searching for "that spot" in the yard to walking straight out into the gravel driveway to pee. It was quick and to the point.

Even with the storms stopping here and moving east, the field across the street started filling up like a ground level swimming pool. It might look bad but I have seen it much much worse that that, still it shows we have had a lot of rain the past few days. 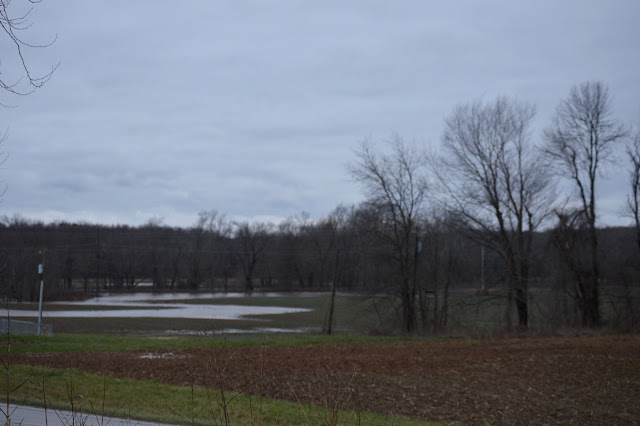 Even after my announcement last night that Winston rolled on his left side for the first time since December 19, he continued to show small improvements. More flexibility. More moving around. Right after I posted that 'breaking news' last night, he later got up, moved to the wall and laid down again on his left side and went to sleep. 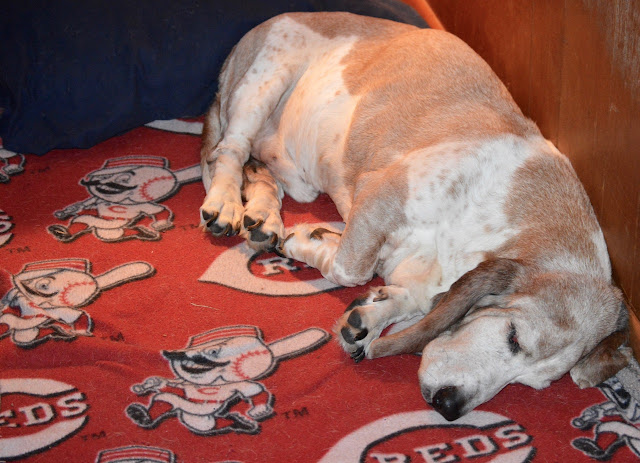 I tried taking away the barricade, took the bloodhounds outside, came back to see Winston standing in front of his seat on the couch ... the brain wanted to crawl up the side of it to lay down, the body said no way.

Since I was going to be on the couch for a while, I lifted him up and placed him next to a sleeping Stella. He moved around to get comfortable and then laid on his left side again, next to me. He slept like that for hours. Later he woke up and then curled to the right into a tight sleeping ball. All seemed normal.

A more scheduled day has helped him. I don't know why I didn't think of this sooner but it just happened. I was taking him outside after he would wake up but the other times I would wait for him to whine, to let me know. I started treating him like a 8 week old puppy I guess. I started taking him out every time he woke up and after drinking his water. That has worked out well.

The important thing now will be to keep him in the sleep mode as he feels better because he wants to do more. Depends on how much he tries to 'walk' inside the house will determine if I need to gate his area to keep him confined.

Last night we went back to the camping equipment on the floor and I got the first wake up call at 2:26 am. Of course by turning on the lights, propping the door open with the wind howling through the trees, and getting him ready to 'walk' with the t-shirt harness ... Stella and Sadie woke up and were ready to escort us outside and watch. Heidi was well aware it was not time to wake up so she stayed asleep. The winds were really strong but it wasn't really cold.

I decided we would pile into the bed, hoping to sleep until 7:30 am or so. He moved to his favorite sleeping position and later I caught him sleeping on his RIGHT SIDE ... a first since December 19. I was awaken around 5:26 am by a commotion of hounds moving around the bedroom. Sadie had stepped in the bedroom and thought it might be time to wake everyone up.

By the time I came to my senses Winston was looking over the edge of the bed, searching for his landing spot. See, he must be feeling better already today. I yelled 'stay', he stopped and we did the prep routine to walk him outside. I was still going to get a couple of more hours sleep, so the day officially started at 7:10 am this morning.

After breakfast, a couple of tablets of Prednisone, some water ... a trip outside ... he was back to sleeping on his blanket at the corner of the living room.

Stella came over to me this morning around 8:00 am and started that soft short howl. It was WAY too early to be fed lunch so I assumed she need to go outside although she had already been outside. They charged out the door and by the time I could grab the camera, Stella had bowled over Sadie and sent her rolling into the driveway with a body blow. 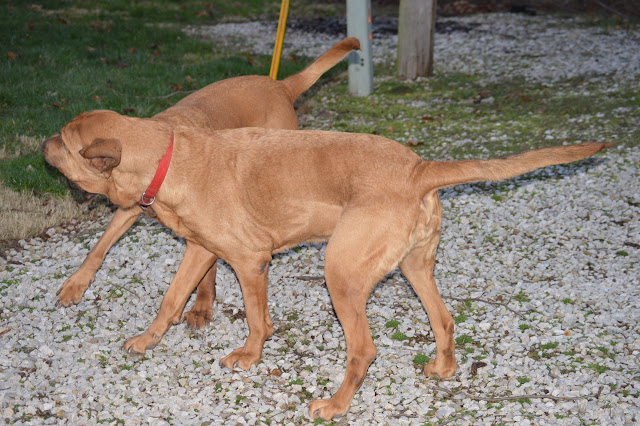 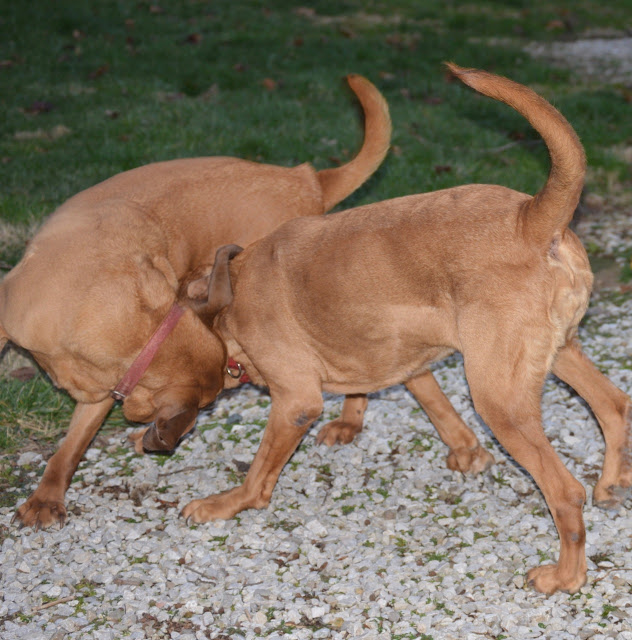 They didn't play long before Stella became more interested in a scent the western winds were blowing toward her. For her protection we headed back inside the house. Sadie wanted to play and couldn't understand why she had to remain quiet for Winston to continue his morning therapy of sleeping. 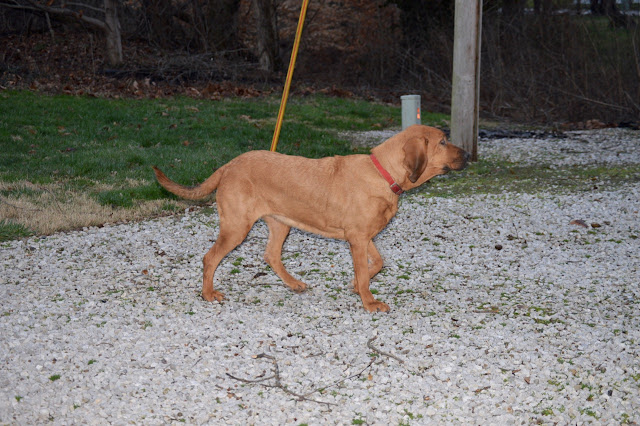 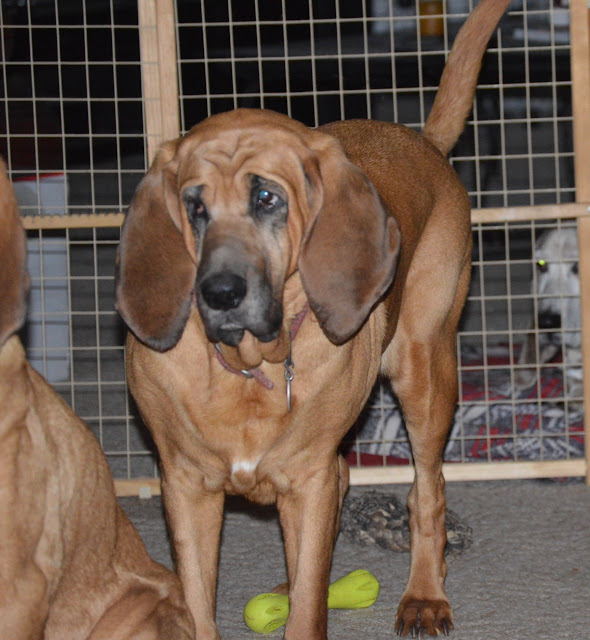 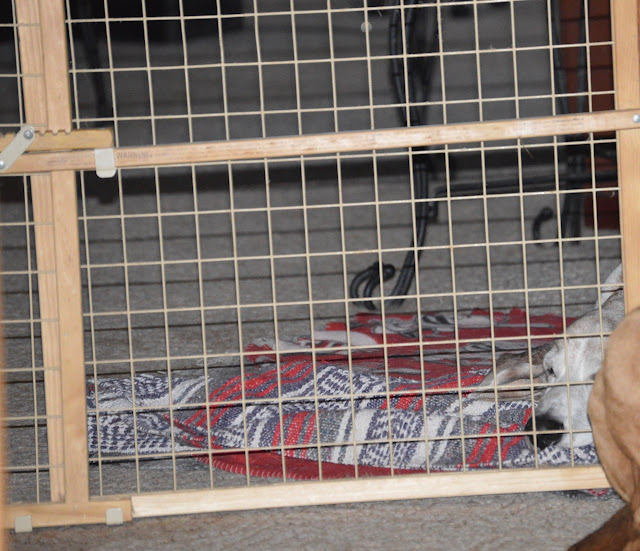 Since Winston had been doing so much better the past 24 hours, I decided late morning I'd head out to get some groceries and stop by recycling to drop off my stuff. It's so much easier to recycle now because I don't have to sort it. Under their new business structure las fall, you dump it all in the same container. They compress the containers, ship to Indianapolis where all the recyclables are sorted there as the container is broke open. Consequently I have canceled my trash pickup at $20 per month, recycling almost everything but food scraps and coffee grounds, which I can drop off a 39 gallon plastic bag of trash for $2 at the recycle center.

To protect Winston from himself and make sure he did not hurt himself while I was away, I set up the gated area. I moved Heidi into the living room letting her roam free and away from Stella. I suspected from evidence the past few times I've left them together while I have been gone ... they fight ... I suspect that Heidi is the aggressor and Stella is just wanting to play.

What a surprise when I got home about an hour later. Glancing through the door window there was Heidi laying next to Winston in the gated area. She left by moving under the coffee table when I opened the door. All was good. No separation anxiety from Stella, Winston had been sleeping and Heidi took care of him.

After a trip outside, while putting away groceries Winston scooted to the next room where the 'basset water bowl' is, drank some water, scooted back to the folded sleeping bag and went back to sleep. He has really improved the past 24 hours. I think I probably need to change "walk" to "scooted" when he travels inside the house.

When taking him outside after I returned home, his rear paws are so close to be pointing forward on their own. About half way there. Once again I flipped both paws into the correct position, lowered his hips slightly just to put a little weight on his rear legs. He stood just a short time before sitting down ... but he legs did not collapse like they did last week.

While Winston gets in some early afternoon rest, Stella stands guard with a bone chewing break fit in her schedule. 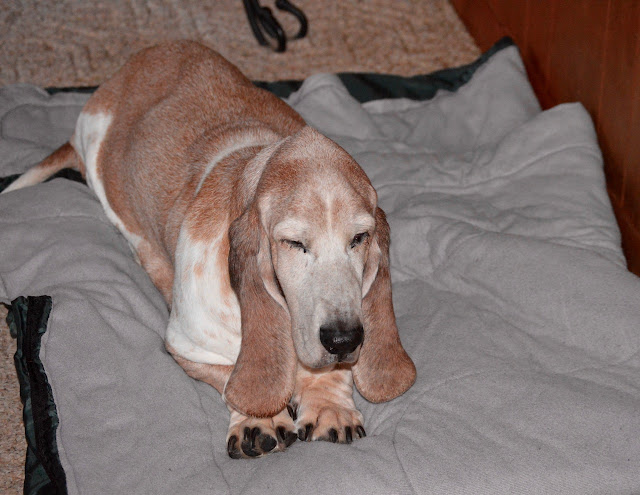 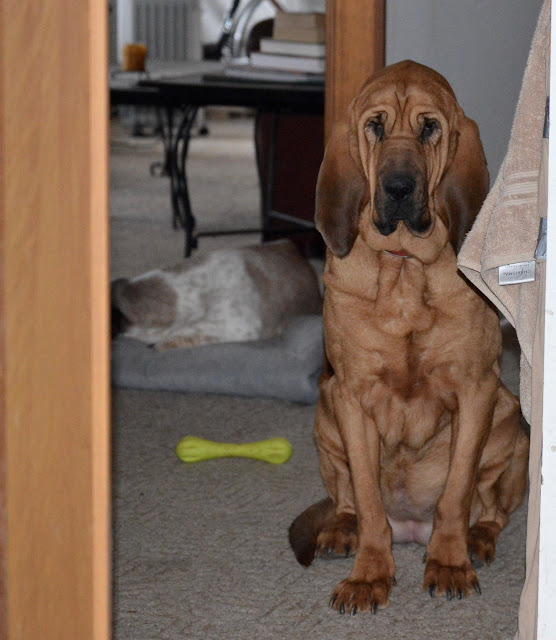 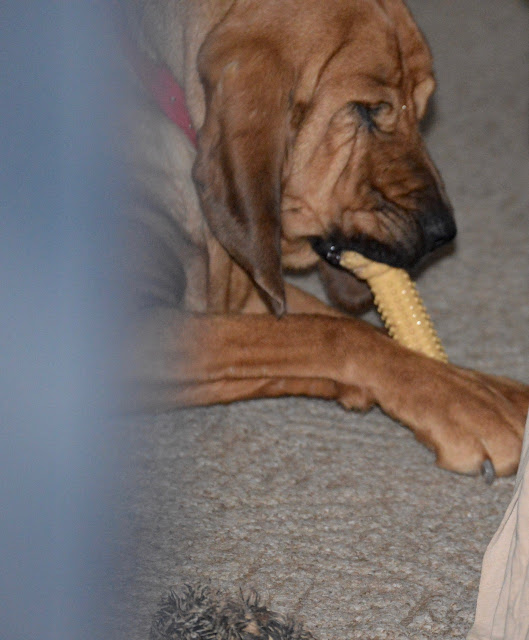 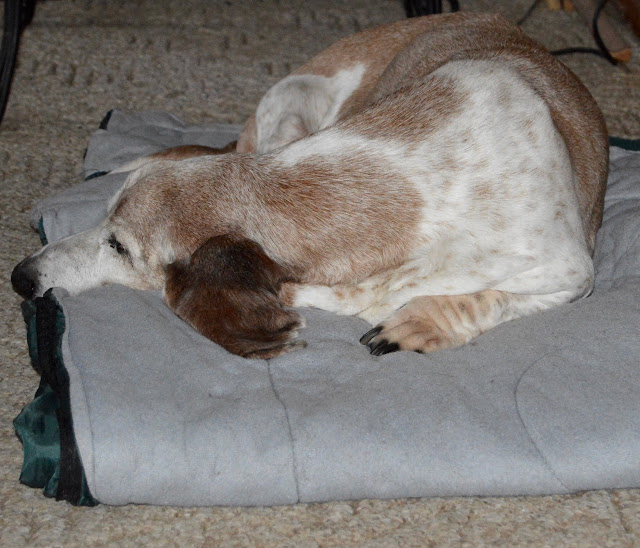 Some time around 3:30 pm, Winston decided he had enough of being on "bed rest". Every time I turned my back he was walking (scooting) somewhere. The last instance I caught him in front of the couch with one front paw lifted on the side of it, ready to make an attempt to crawl up onto the couch using his front legs like a pull-up. So ... I made it easy for him, by lifting him onto the couch and prevent his escape with the baby gate in front of it. 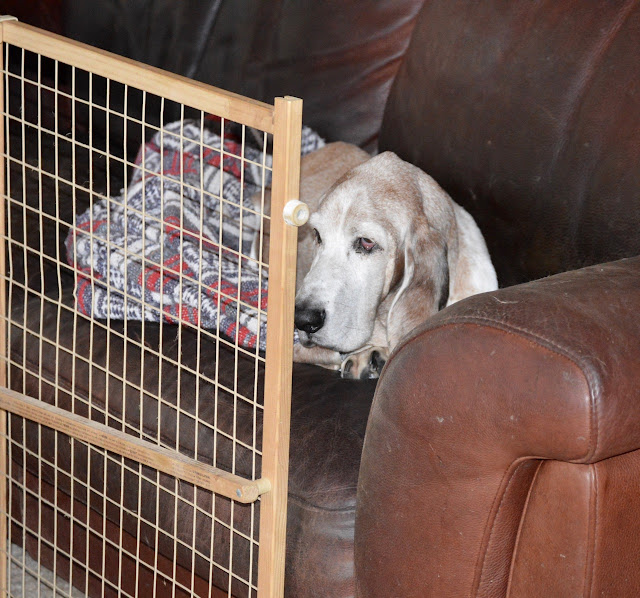 He has to be feeling better from all of the traveling I have caught him doing today. It looks like I am going to have to confine him with the set up I had before.

On our trip outside later, it sure did look like he was ALMOST trying to use his back legs. They were not just dangling but a LITTLE movement into position. It was so little though I can't really say if that was what he was trying to do or not but there was something there.

Both bloodhounds were after me all day to do something. This is their way of applying pressure to me to get what they want, whether that be food, a walk, more food or a game of indoor fetch. 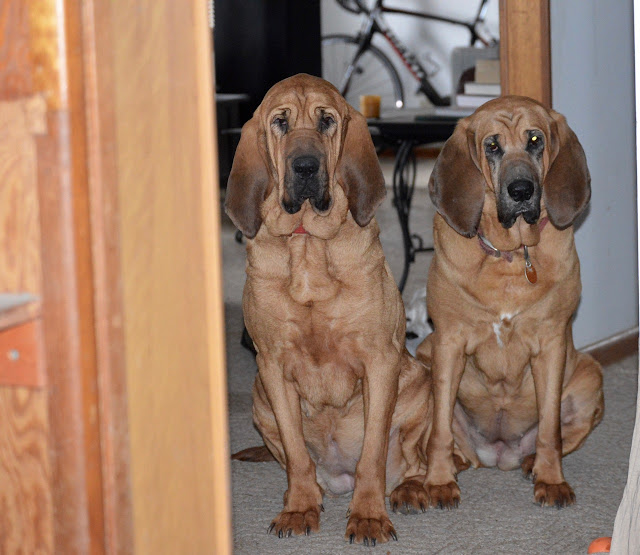 Stella has been pretty restless today after being pinned up inside for the past three days due to constant rain. Her and Sadie went outside for some intense play, only to be asleep within minutes after. 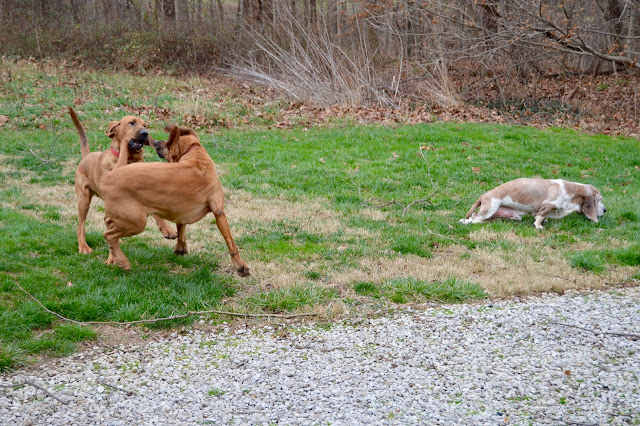 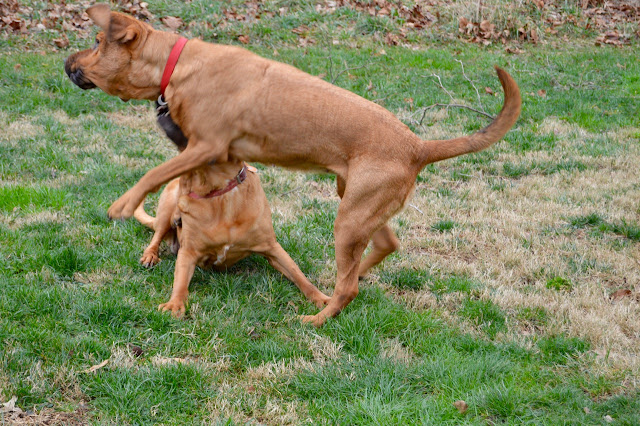 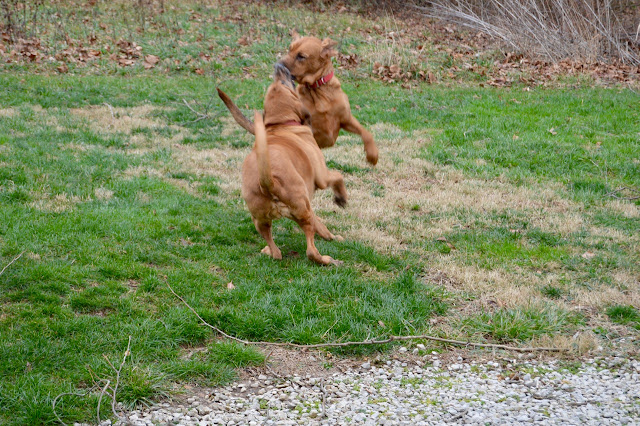 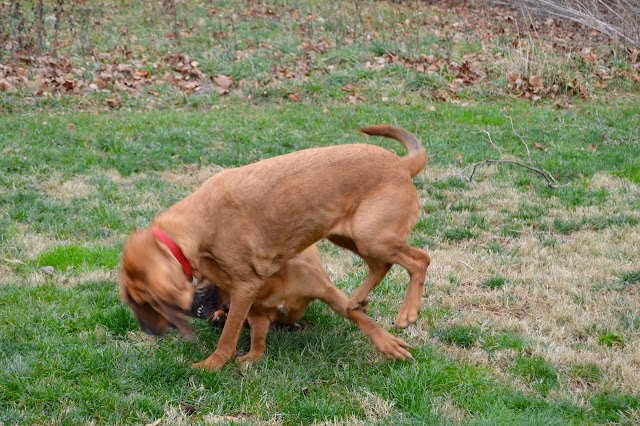 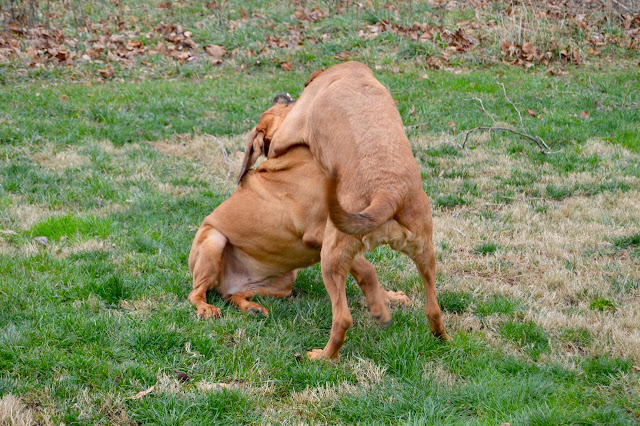 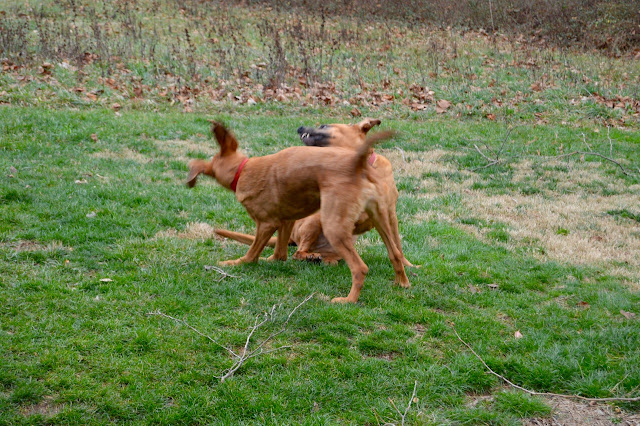 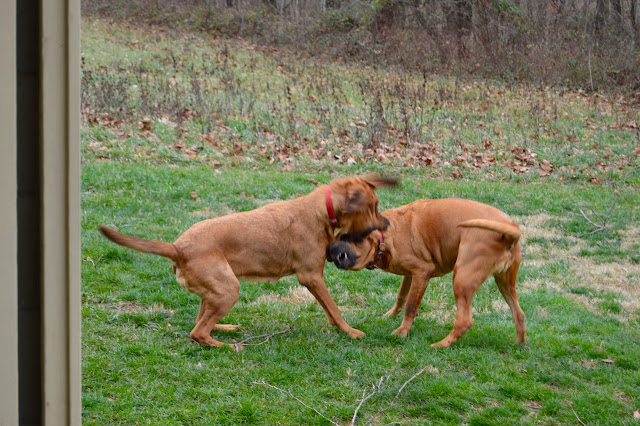 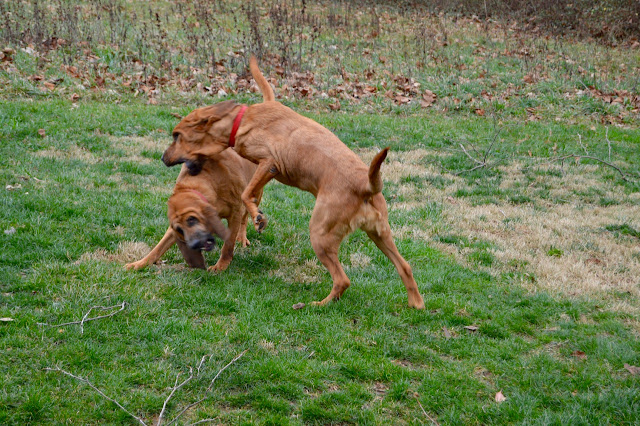 I think that last photo could be going into the "all-time classics" folder, it's one of my favorites.

By 4:00 pm most of them were in for an afternoon nap. Once Winston was on the couch, Sadie had moved back to her normal spot of relaxation. Heidi? ... she had been in that position for most of the afternoon. She even tried to fight/wrestle with me when I picked her up just to move her to a different room. As you see after her paws hit the floor of that other room she sprinted back to bed ... I had no other option but to make her comfortable. 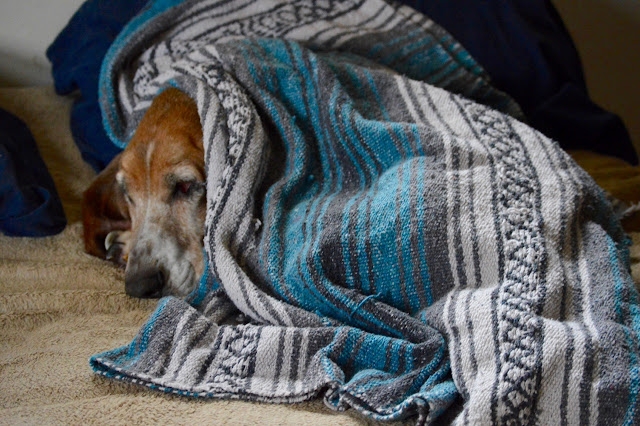 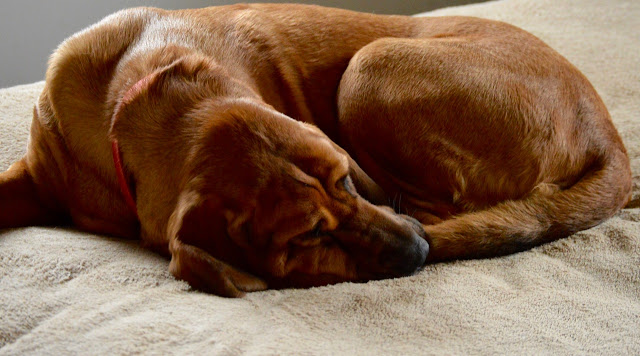 Winston did it again. All the hounds wake up when they hear me making noise in the kitchen. They suspect food is involved so everyone except Winston comes running. He wakes up on the couch, so I know I have a small window of time to get him off the couch, fed some water and then help him walk outside.

All of that happened okay. I sit him on the blanket on the corner with Sadie. I glance over and Winston is gone again. I hear a dog lapping water. He had 'scooted' to the next room where the basset hound water bowl is. He then made it back almost to the corner blanket area. I waited a few minutes to see what he would do .. he sat for a while and then headed back to the blanket next to Sadie.

That wasn't good enough. It's not two minutes later where he leaves and is back in front of the couch, wanting up there. Not going to happen this time, especially with all the H2O he has injested in the past 10 minutes. So ... I have no choice but to set up the barricade so he can get some rest.

He was asleep within 5 minutes. 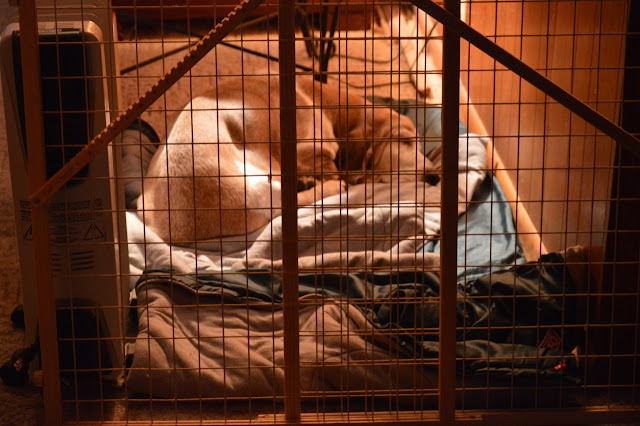 Winston is not standing on his rear legs yet, but he continues to improve with more tail wagging and he had another good day here in the "tropics" of Southern Indiana.
at December 29, 2015
Email ThisBlogThis!Share to TwitterShare to FacebookShare to Pinterest
Labels: Bloodhounds Playing, Heidi, Winston's Status