Day 5 - Winston Continues To Hang In There


I have to admit, there are sometimes it's really hard to stay positive and believe that Winston is going to recover. That just maybe it's a pinched nerve or a muscle sprain, or a inflamed disc. There are those moments I really have to fight to stay mentally positive on this situation. I want what is best for him and at the same time I don't want to make a decision that I cannot reverse.
At the same time there are millions of other people in much worse situations than me, here in the USA. Mine are very very small compared to them. We are experiencing a "bump in the road", while many others are facing a life threatening circumstance.
Yet with just a glance from Winston looking up at me looking like he always has I find in that split second connection with him that things are going to be alright ... it's just going to take time.
He needs all the rest he can get but he is wanting to walk everywhere by dragging his hind legs. He doesn't understand that he has to rest. I didn't have to gate him in this photo and after the blanket was laid over him he was more than happy to take a nap. Winston spent the afternoon and early Tuesday evening in a deep sleep ... good for him. 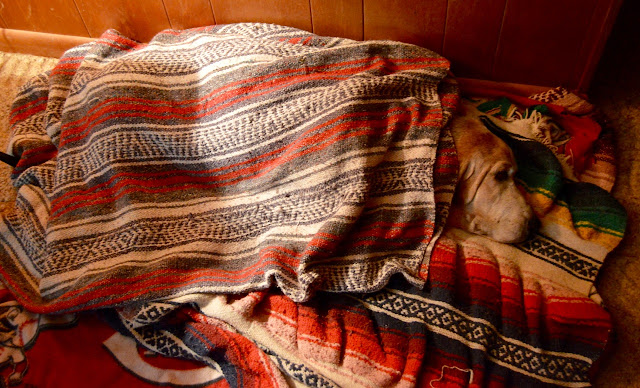 When I moved to the couch to watch some football and basketball last night, he whined a little and I could tell he wanted to take his seat on the couch next to me. He stood there for a while and then was able to move himself into a position he wanted. During these movements he makes throughout the day ... he never yells in pain.
Last night when it was to shut it down for the day, I had to decide whether to move Winston from his sleeping slumber to the closet area for the night or leave him there, gate the front of the couch and sleep out here with him. I gated the couch, grabbed a pillow and my sleeping bag. That worked out well for the 2nd night in a row. 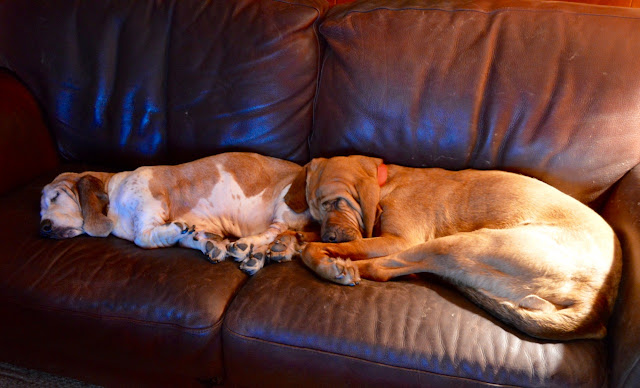 Around 1:35am, I heard something to wake me up on the floor. He had scooted back into Stella and was sitting up while laying his neck and head in the fold between cushions above them. I brought him down to the floor to sleep. He did his normal nosing a spot under the sleeping back so he could crawl inside of it with it unzipped all the way and spread out like a blanket. He slept soundly.
At 5:30, Sadie and Stella woke up, much too early for them and me ... wanting to start their day. They made a quick trip outside. By the time I had walked to open the door on the opposite side of the house house, Winston has "sprinted" dragging this rear legs behind him, he was already at the door to go outside. Down the steps and out he went before I could even pick him up.
We all moved to the bedroom, the bloodhounds taking their normal sleeping spots. Heidi of course was still asleep. At 7:30am the daily routine started. I have to really watch the bloodhounds during this time because they get excited when they know they are going to be fed. Stella has a tendency to back up and walk out of control, Sadie hops up and down as she has done for over 7 years before being fed.
I had put Winston on that blanket at the corner of the living room where you see him with Sadie this morning. When he heard the containers of dog food being opened and the dishes filled, he once again "sprinted" UNDER Stella and between her legs to his food dish ... ready for breakfast.
It's times like those "sprints" I wonder if it is better for him to remain active on his own or should I prevent that type of walking for the next 6 weeks?
This morning he is looking pretty good. By this time he has had his breakfast and water, plus went outside to dump tanks. I alway feel encouraged when I see him doing that. Of course the best photo of him, sitting straight up looking at the camera and very distinguished ... was interrupted by Sadie walking in front of him about the time I snapped the photo. 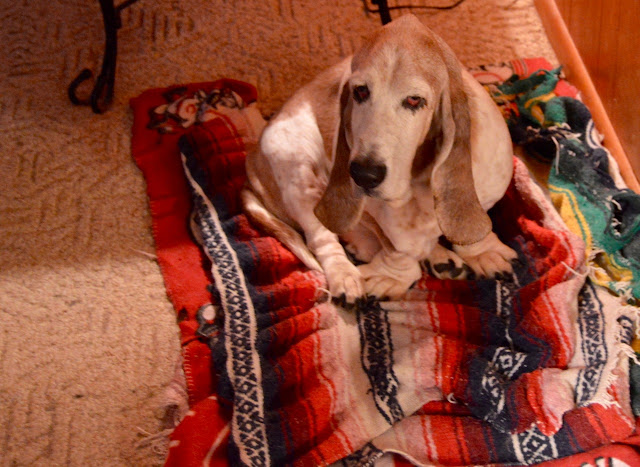 Sadie is ready to assume her role for another day as Winston care-taker. She has done a good job of that the past 4 days. Besides taking the field walk yesterday, Sadie never leaves Winston too far away. Stella helps out by sleeping with Winston on the couch. 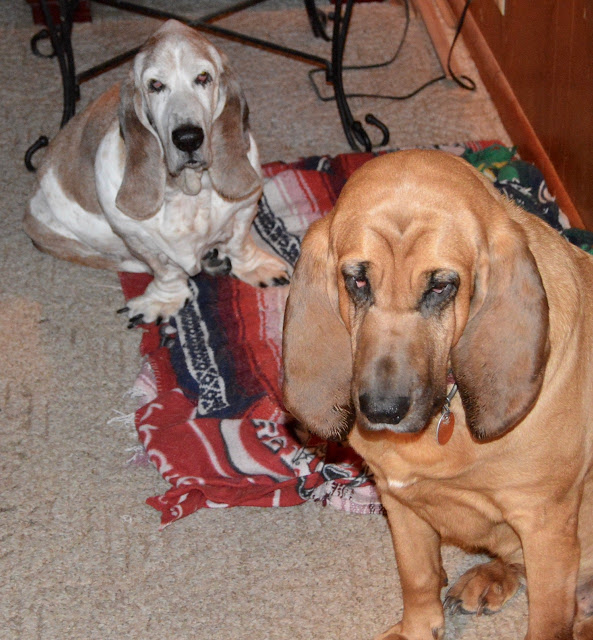 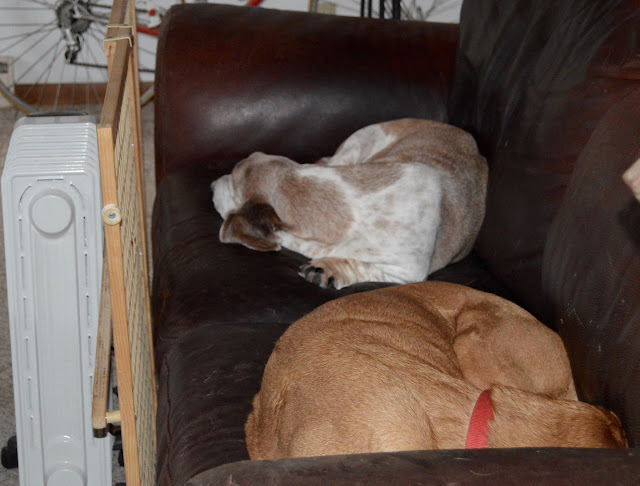 A new encouraging sign this morning. As I was cleaning Winston's under belly with a baby wipe, I started wiping the inside of his rear legs ... he moved each of them as soon as he felt me touch them. I hope that means that any nerve damage and his back is healing. I guess one sure way to find out what he feels or doesn't feel today is to cut his toenails.

Heavy thunderstorms are forecasted for this afternoon with some tornado potential. Really strange to hear that two days before Christmas. With all the rain we may get this afternoon I hope that Winston decides that it is really okay if he pees on the concrete in the carport and his spot in the yard can wait for another day. In this case he is house trained too well.

About the time I was about to post this I hear a low whine from the living room. He is wanting to go outside. It has stopped raining, very warm with winds from the SW. After sitting him in the yard, he produces another normal size, normal color firm stool. I know it's gross to some talking about dog poop but that being normal has to be a good sign of being healthy. He decided he wanted to sit and enjoy that breeze and enjoy the warm air ... warm enough that I am wearing a t-shirt and wasn't cold. 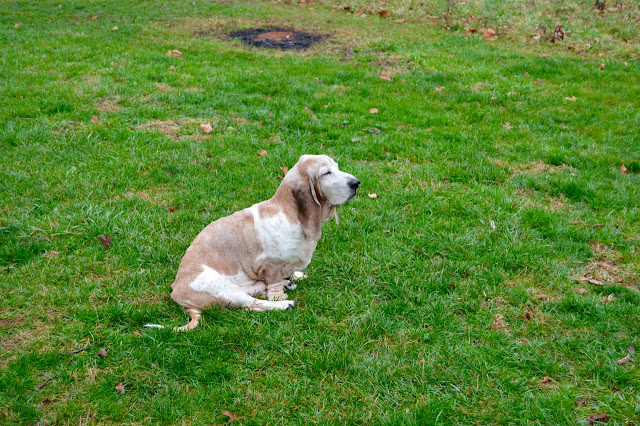 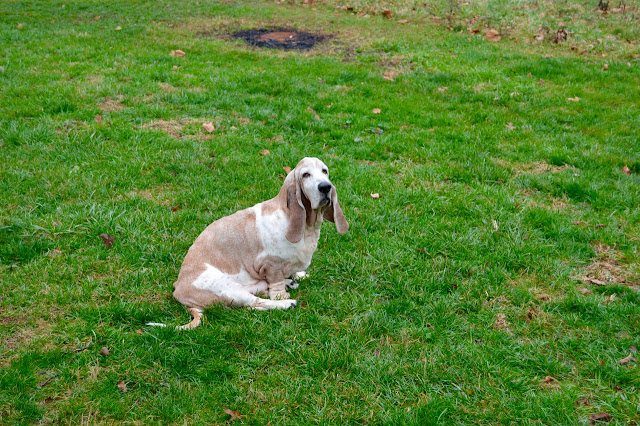 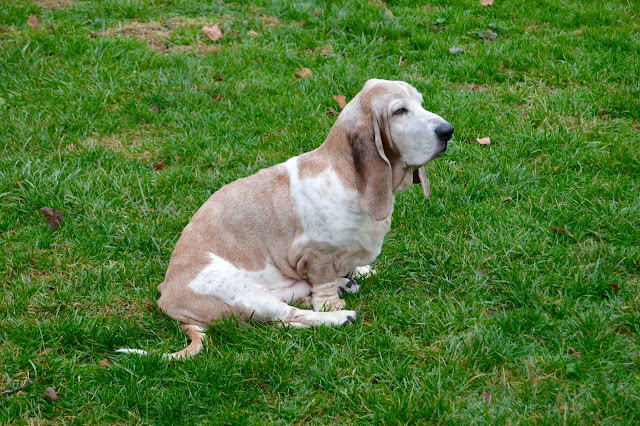 That's it's from this morning in the "tropics" of southern Indiana. I'll post more later today.
at December 23, 2015